The bus ride from Cusco was 27 hours, mostly comfortable, but uneventful.  We reached the Pacific Ocean again, my first time since my transfer in Antofagasta ages ago!  Seeing the Pacific always brings me a flood of feelings – a few thousand more kilometres up the coast, and it’s home.  Only having two weeks left in the trip…that makes home seem a lot closer.

Silvia and Óscar have been planning to head up through South and Central America to Mexico, and I seriously thought about joining them to Colombia, at least.  I’ve had such a pleasant few days with them (and Marlies and Flo) that I really wanted to just keep going with them!  (Marlies and Flo ended their trip in Lima.)  Knowing that Lima would be my final two days with them, after almost six weeks- half my trip!- of intermittent contact, made me quite depressed.  So I spent the bus doing some Colombia research, resolving to change my flights and work some magic…

We arrived in Lima, where we were promptly ripped off by a driver who charged us S/. 15 ($5) just to take us around the corner from the bus station to our hostel.  Should’ve cost S/. 4 or so.  Ugh.  Reminder to always check where things are beforehand…

Hungry for lunch (it was 4 pm after we checked in and cleaned up after that long ride), we needed some food.  Lima is known as the gastronomical capital of South America, so we headed…straight to the food court!  Fast food.  Heh.  The good meals can wait.  It’s almost amazing, all the familiar creature comforts we saw – churros, Subway, even bubble tea!  (Yes, I got some.)

I hadn’t heard many good things about Lima from other travelers, but the other four certainly did – and whoever informed them was right!  Lima is beautiful.  We passed by some plazas and pedestrian shopping streets, where we ran into Damien, a friend of the other four who was the fifth and final tourist on their nightmare bus to Rurre.  Small world! 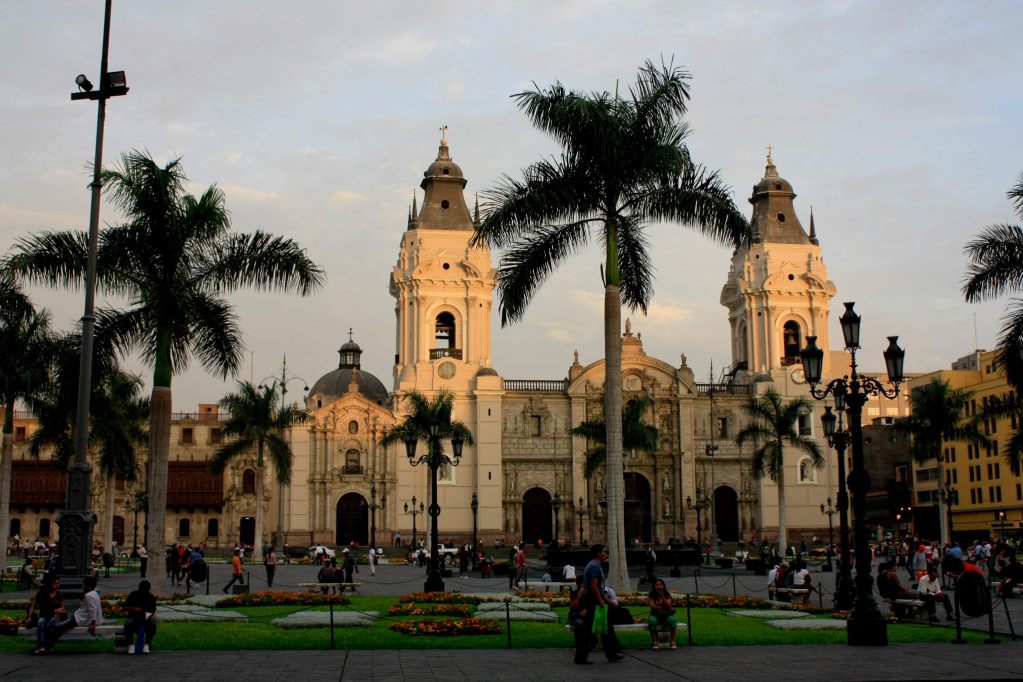 By the time we kept going, it was getting dark – we passed through the Plaza de Armas all lit up and photogenic, some random public displays, Chinatown (my first in South America – Peru has a TON of Chinese people, and many Peruvians have Chinese blood), and of course, I grabbed a chocolate-filled churro.  Mmmmm.  Flo and Marlies opted to skip dinner; Óscar, Silvia, and I grabbed some seafood – all fried, with ceviche as a dip.  Good, but almost too heavy!

And the last day as a group of five came around… 🙁

I tried to call Delta and change my flight, hoping to change my departure city from Quito to Bogotá, and add an extra week.  They charge a penalty of $250 plus the flight price difference…and no option was less than $370, even just changing the departure date without changing the city from Quito!  That’s far too much for a week (and Delta, you suck).  In effect, it brought my new plans to a complete halt, but because I was thinking about it so much already, it just made my original trip end date seem as though I had to cut my trip short!  Silvia decided to do some research on Ecuador though, a country they were originally planning simply to bus straight through…maybe we’ll meet there!  That certainly made the pain a little easier to swallow.

After all that business, we headed to Lima’s other tourist-friendly district, Miraflores.  It’s full of restaurants and nightlife, and it’s also where the beach is.  Unfortunately, when we got there, all we got was fog – couldn’t even see the ocean!  Knowing that it would clear, we walked around and window-shopped for a few hours before returning.  It’s pretty, but that beach is really quite dirty…  And despite all the good restaurants around, we had no clue where to go and wanted to be cheap, so we settled for a cheap menú del día (S/. 7) instead.  Eh well.

Dinner was our final final time together, and being the first to leave, I got dibs on deciding what to go for.  Originally, I wanted to try cuy (guinea pig), a meal that Óscar was extremely apprehensive about but willing to go for.  Fortunately for him…despite its abundance on the menus of Arequipa and Cusco, it’s rare in Lima.  Our hostel receptionist called every restaurant he found on Google that served cuy, and they were all only open for lunch.  So!  Fancy meal instead!

And oh wow…best and most expensive meal in quite some time.  On the recommendation of the hostel receptionist, we headed to the Plaza de Armas, where he pinpointed out one of his favourites that served good Peruvian food.  I had an absolutely luxurious pumpkin risotto with chicken, onions, mushrooms, cheese, and some other amazing stuff…  Everything we ordered blew us away.  The atmosphere was a little funny though, for such a fancy meal – cheap napkin holder on the table, TV on the futból match…and the meal with drinks cost us about S/. 50 each (less than $20).  But Lima is indeed a foody city, and I’ll need to come back someday and be more spendy.

We took a speedy taxi ride back to our hostel, where I picked up my things and had a very emotional goodbye and a sea of hugs.  I’ll hopefully be seeing Marlies and Flo when I head to Europe this summer, and Silvia and Óscar…really could be anywhere!  I never expected to bond so much with anyone while traveling, and I find it such a great thing how close we’ve become.  Going back to solo travel will be hard.

And as for Lima?  I’ll be back in five days.  It’ll be a quick hello, less than a day, but still a friendly one nonetheless.