Having now spent far more time in Ethiopia than any other country I haven’t lived in, it feels strange and sad to leave for the next country, but it’s the right time. After hanging out in Addis for the third time, enjoying the company of friends both local and traveller, and being quite accustomed to the culture and pace of life, there couldn’t be a more strange (but beguiling) place to end my Ethiopia travels in than Harar. 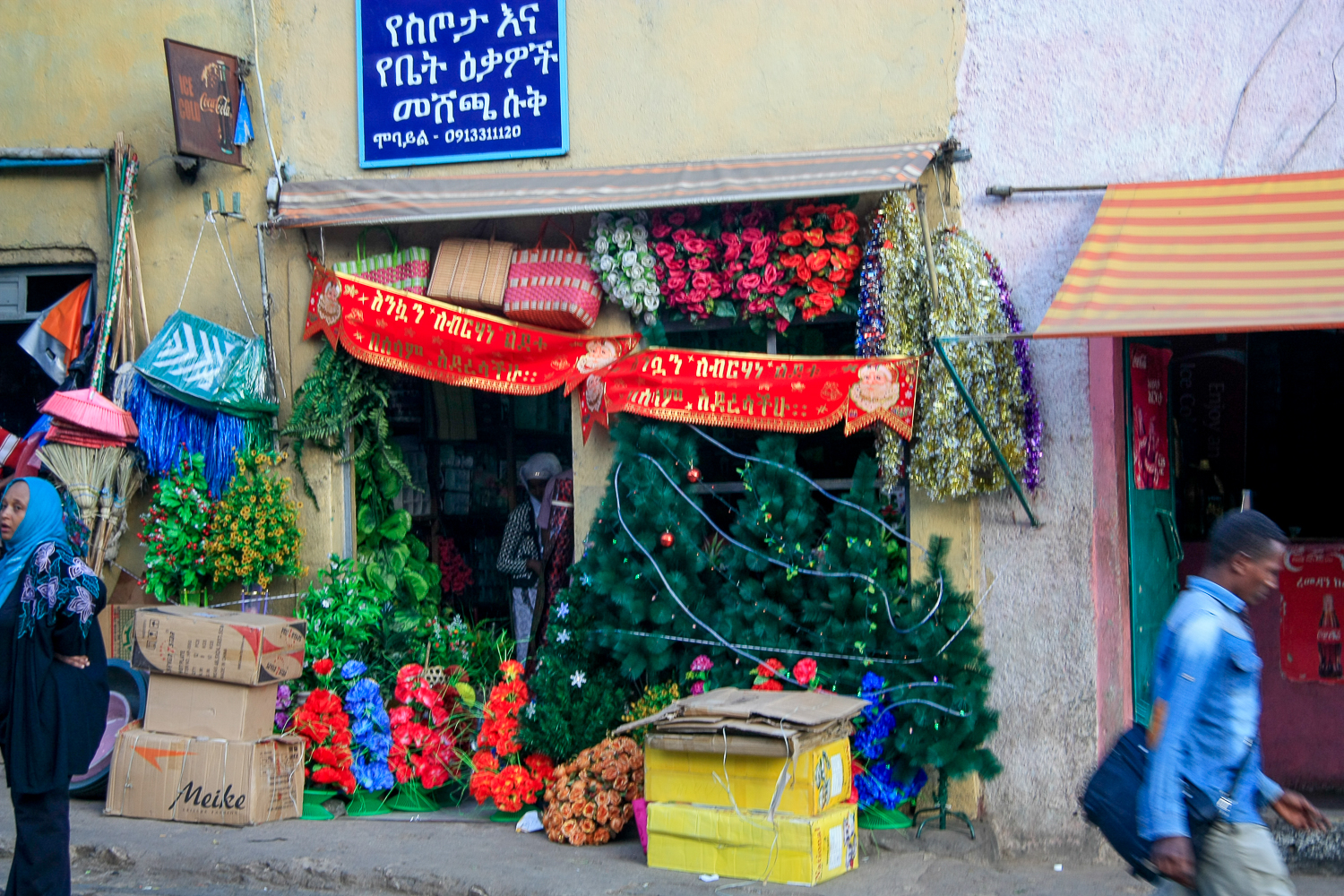 It’s Genna — Ethiopian Christmas. Well, it is for the Orthodox and the Christians. But Harar is the Islamic heart of Ethiopia, the cornerstone of the half of the population that is Muslim. Unlike the rest of Ethiopia, Harar had its own line of emirs (Islamic kings), and was even occupied by the Egyptians for a ten-year span. Though much of its old history is lost to conjecture, it’s spent the better part of the last two centuries serving as a trading center for the world, with influences from India, Turkey, and even some Europeans who moved in. 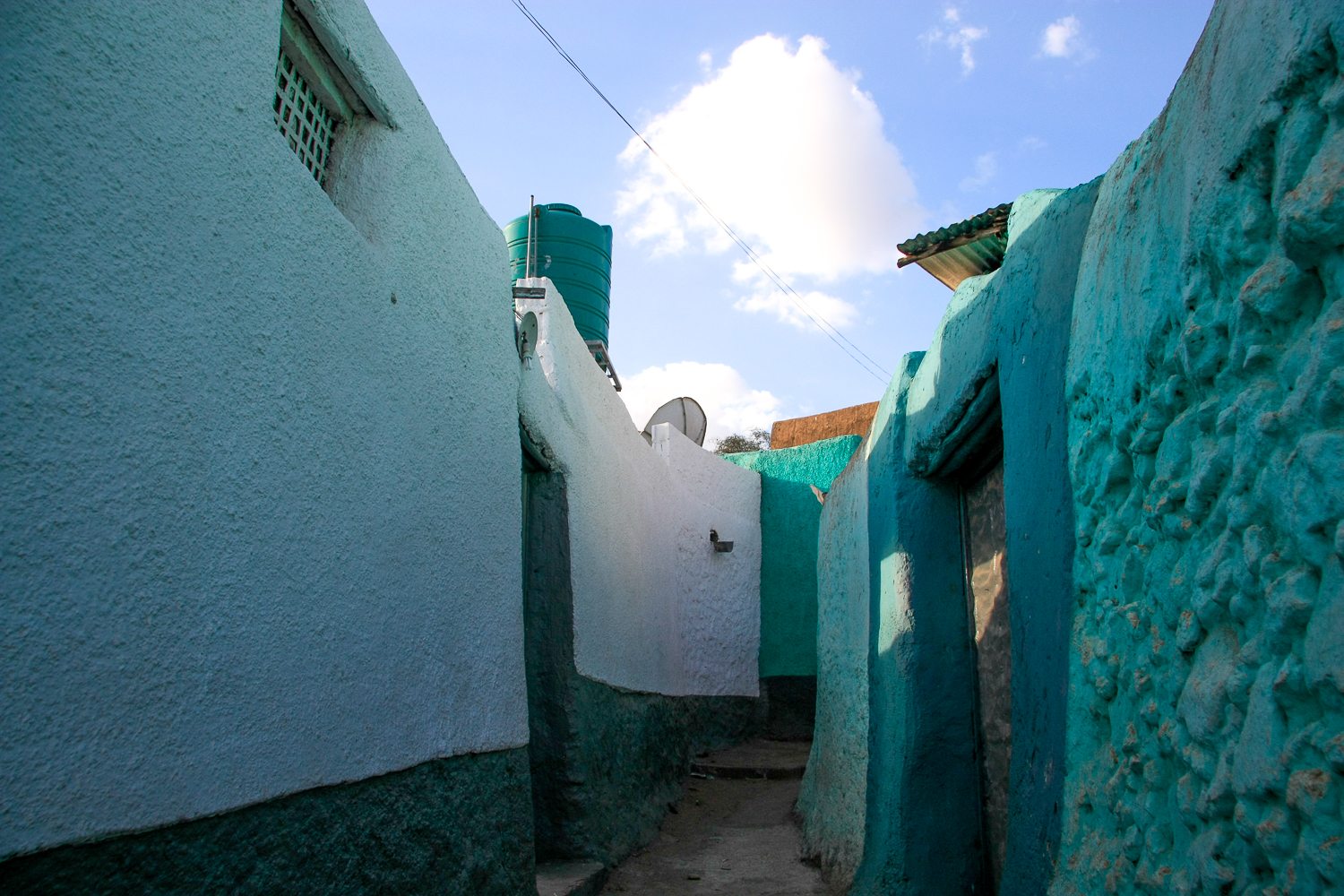 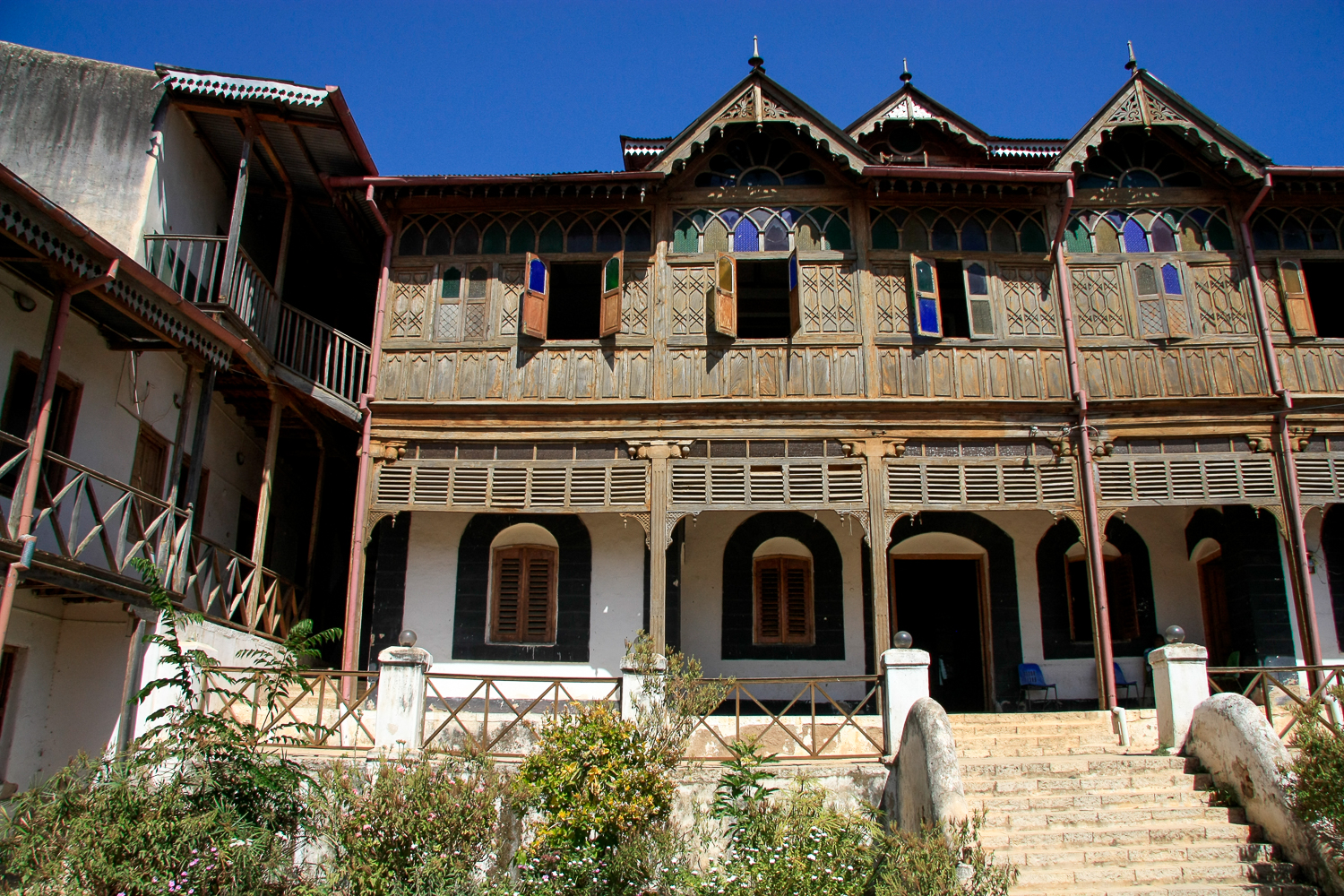 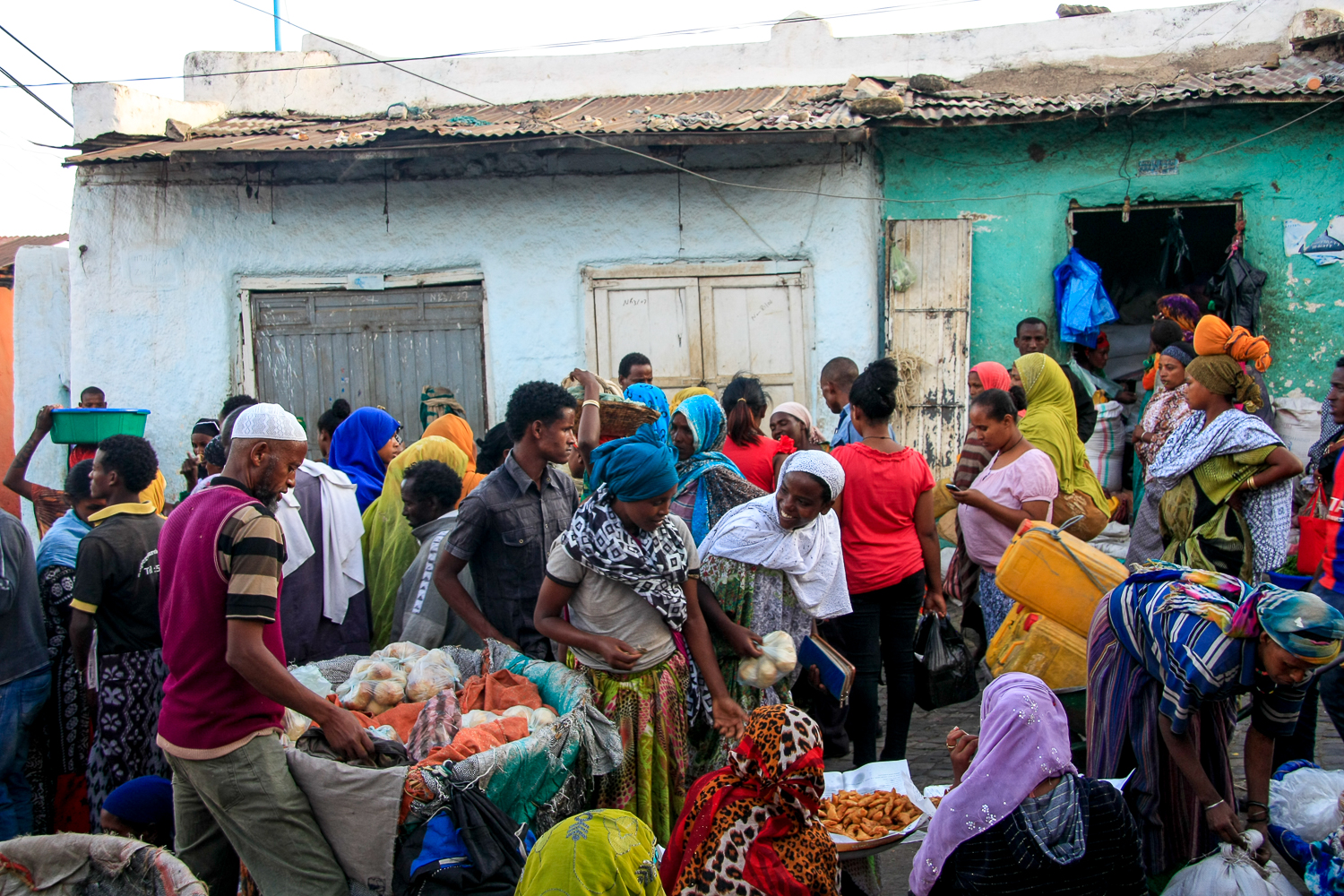 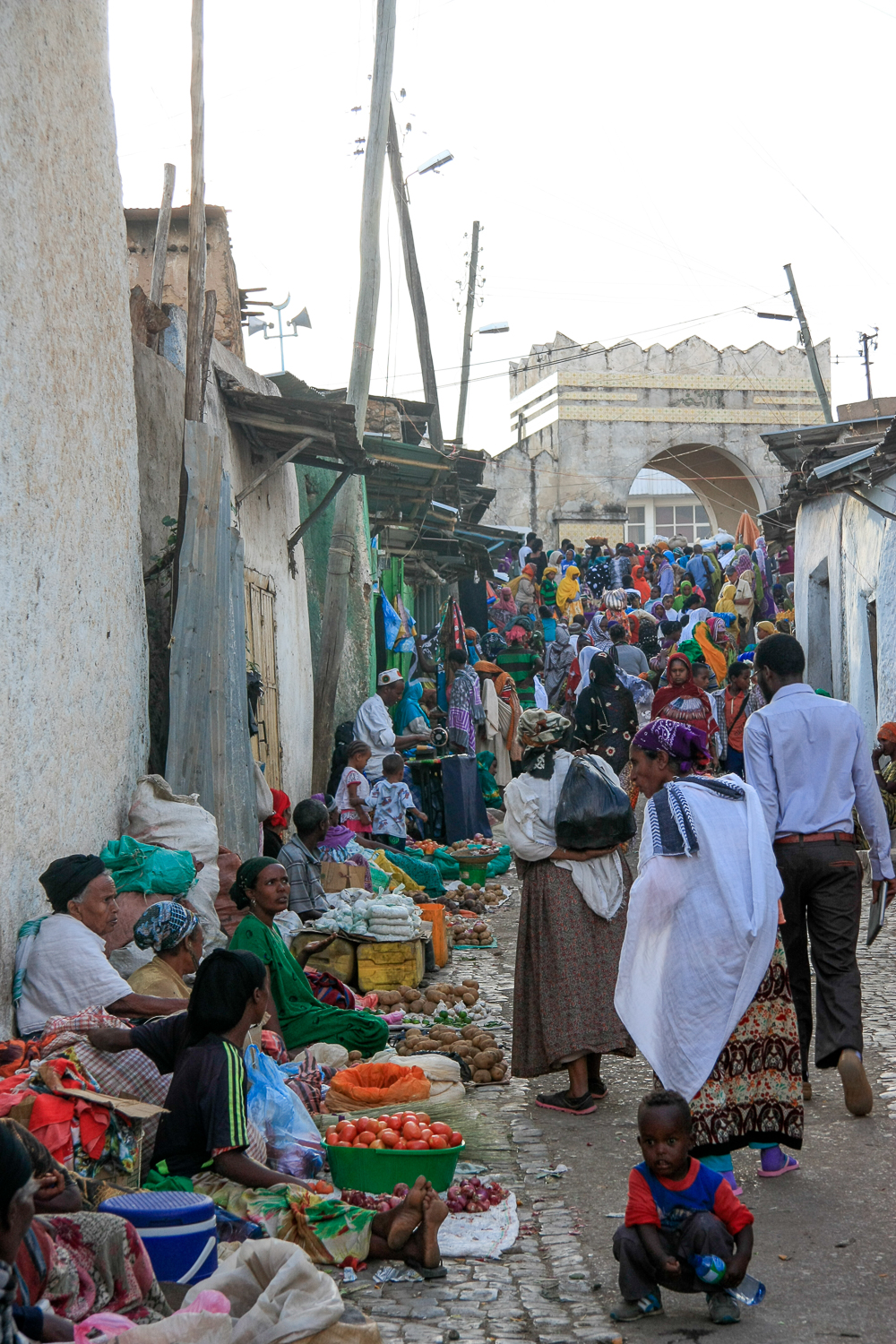 Harar’s old city (UNESCO-listed) is shrouded in legends, purported to be at least 1000 years old. Said to be the fourth-most holy city in Islam after Mecca, Medina, and Jerusalem, Harar boasts 99 mosques (even though it’s only got 83) and the tomb of Sheikh Abadir, who brought Islam to Ethiopia and has done enough (never defined to me, sadly) to warrant pilgrims from around the world. (Didn’t see any though…) Why 99? One for every name of Allah, and according to our guide, the 100th is a secret that only the camels, with their sly aloof smiles, know. (Who cares if that’s actually a local legend or just a made-up story, it’s hilarious.) Nevertheless, it’s the largest such concentration of mosques in the world. 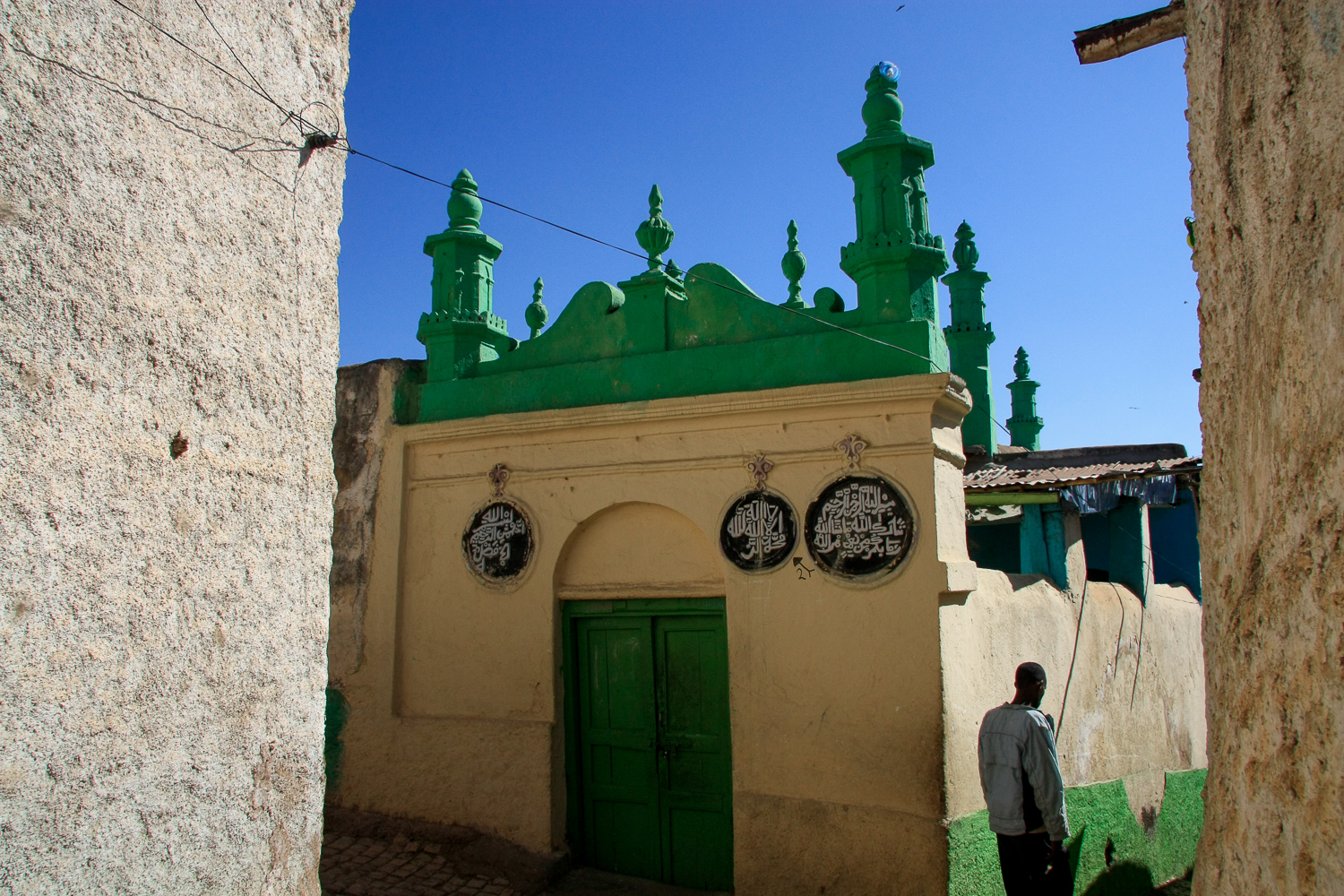 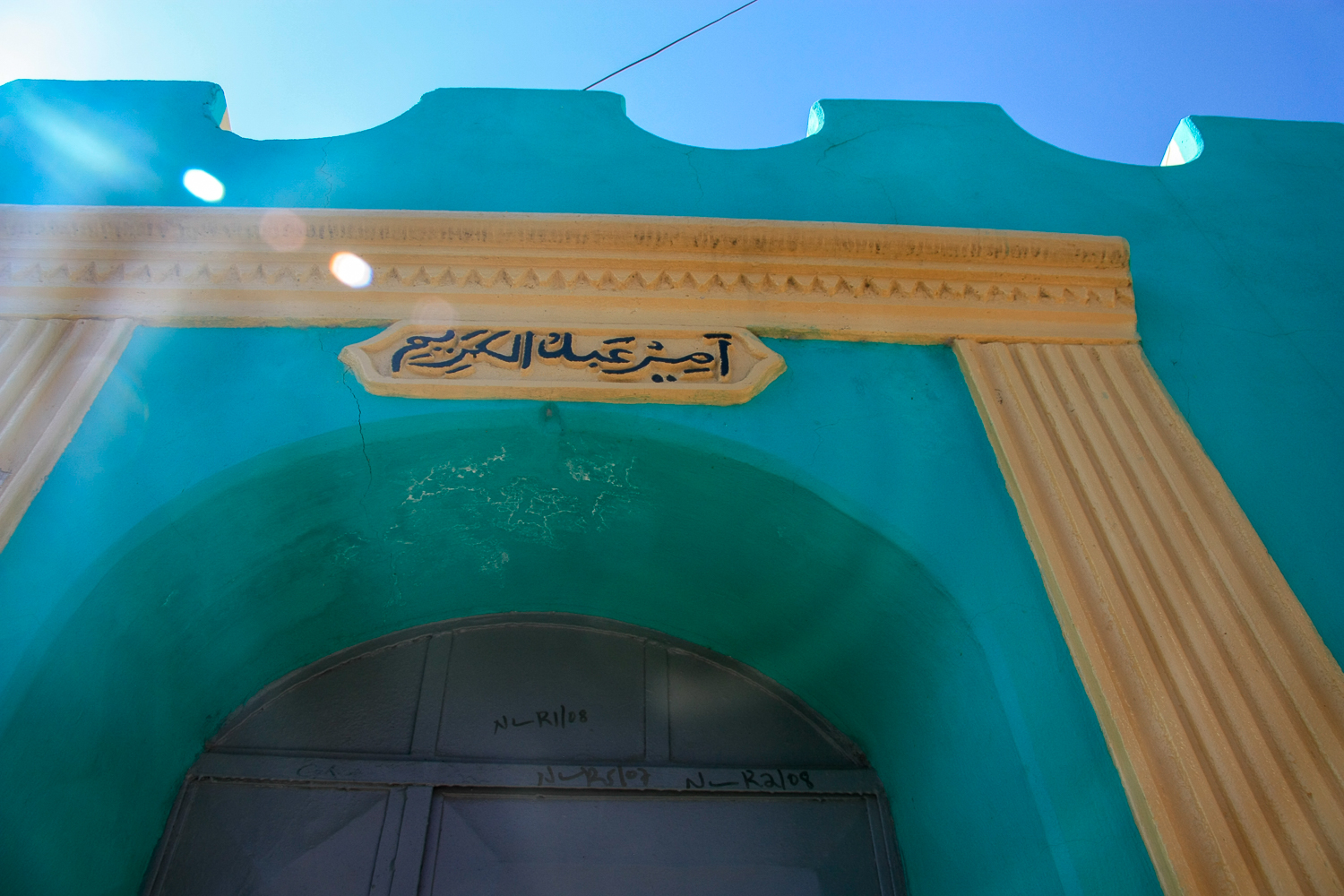 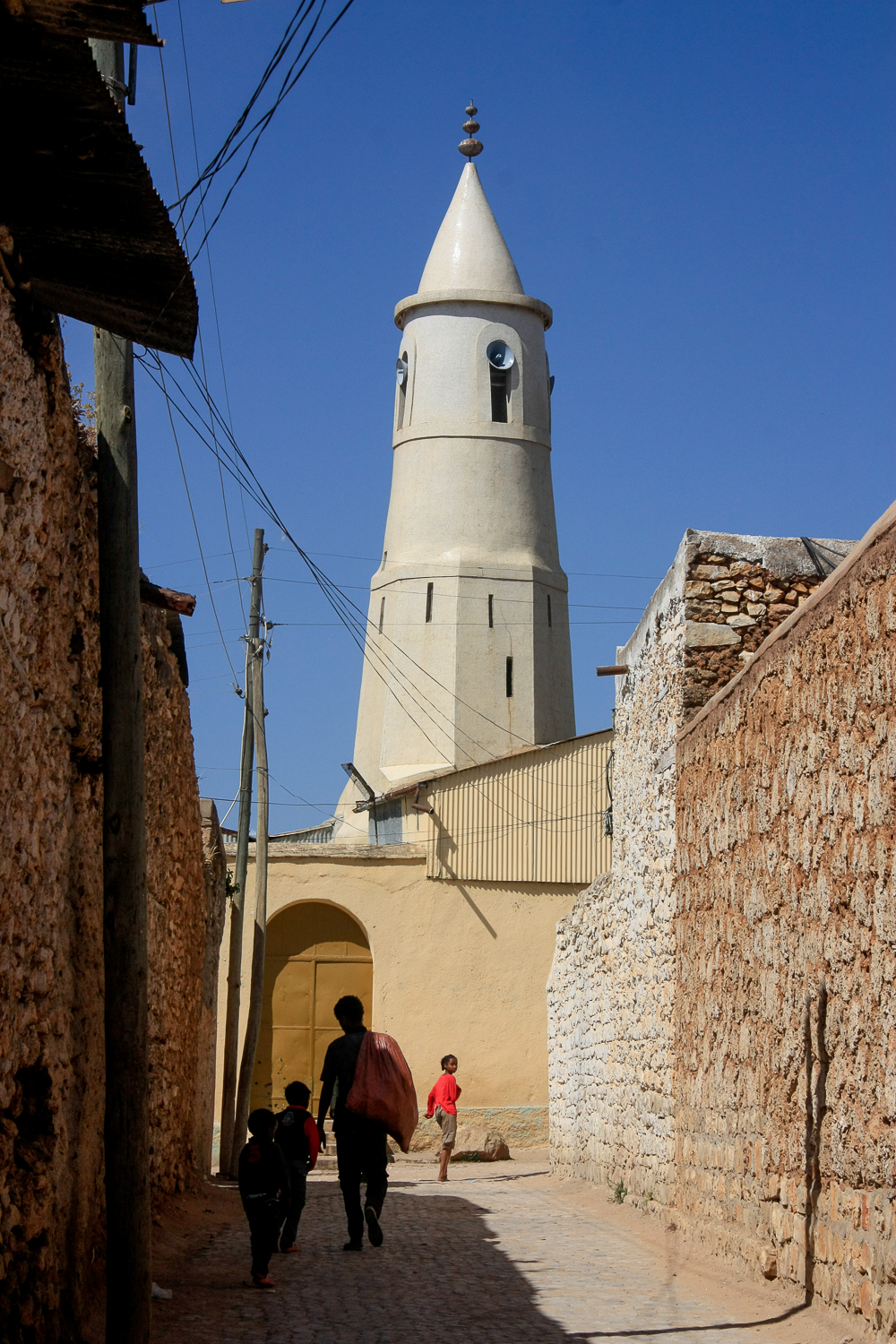 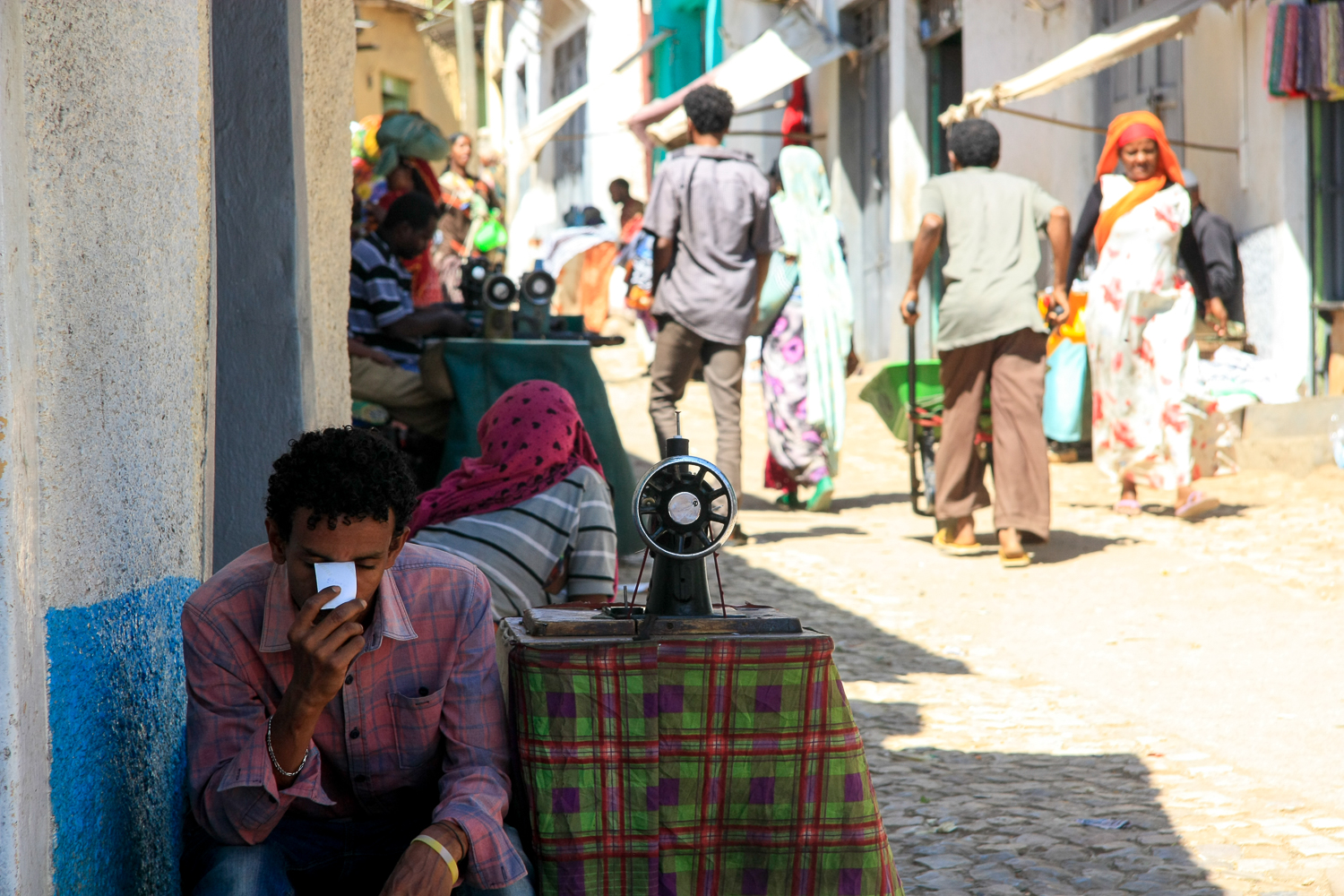 Immediately behind the busy main streets running between the six gates are hundreds of twisty alleyways, not unlike Chefchaouen in Morocco. Some of them have legends attached, like the “peacemaker” alleyway so narrow that quarrelers can’t pass each other going the other way without bursting into laughter. It was wonderful to get lost between the myriad colourful houses and hidden shops, emerging occasional to face the busy commercial areas or the odd market, and diving in again to some mosque on the side or tomb. The side streets were quiet and languid, which made them rather nice places to duck into from the main streets and the many tiresome cries of “You you you! China! Faranji! Money!” 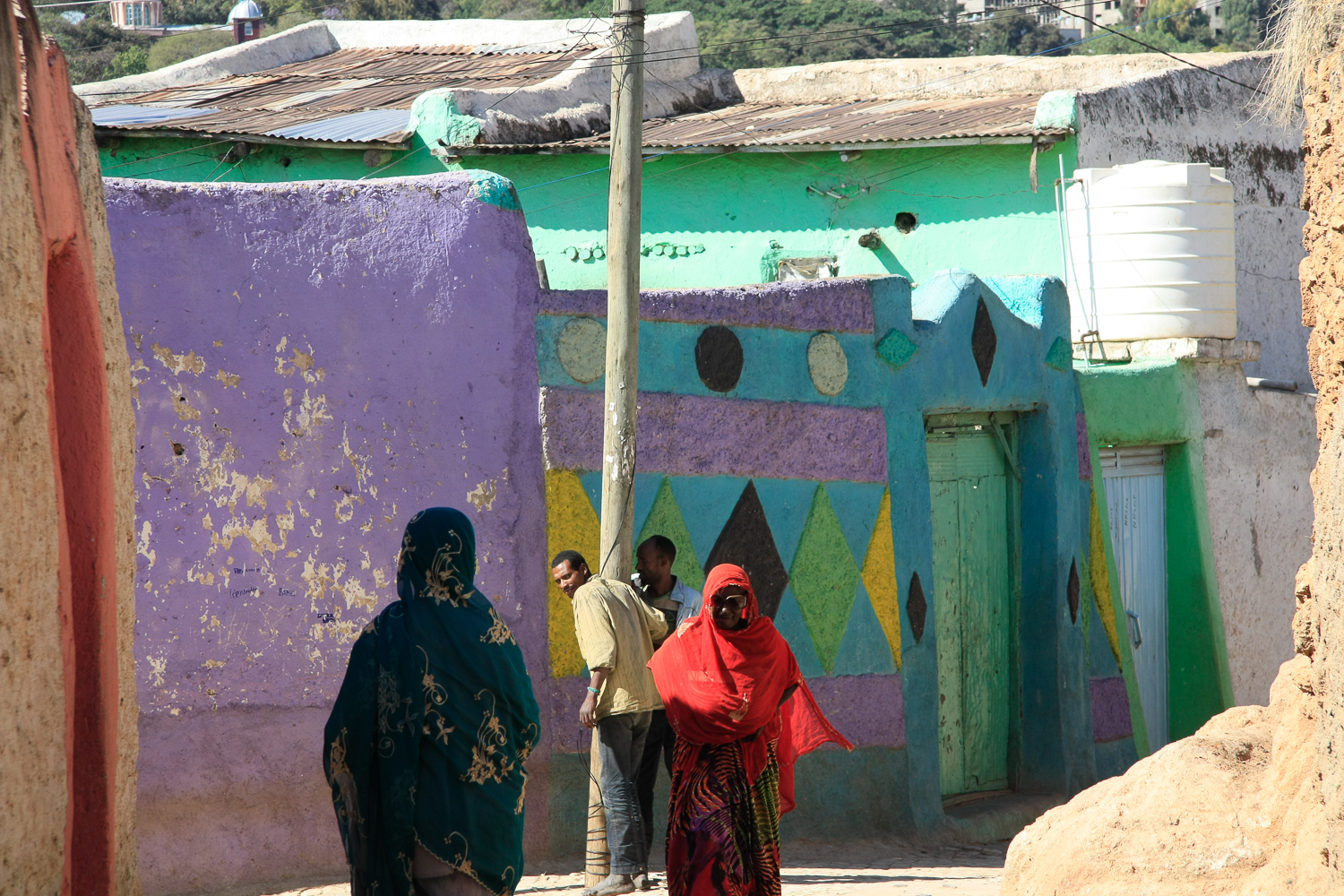 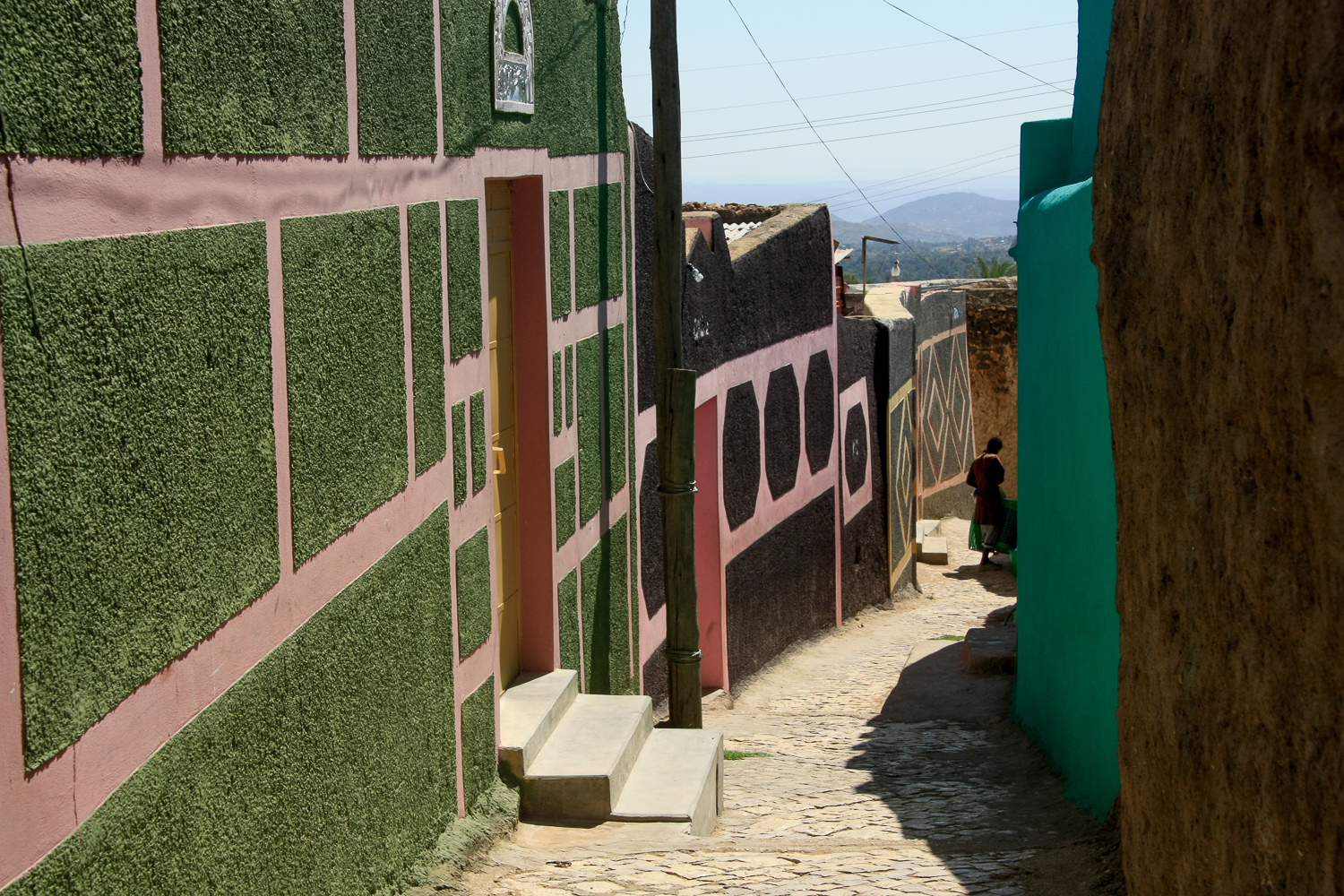 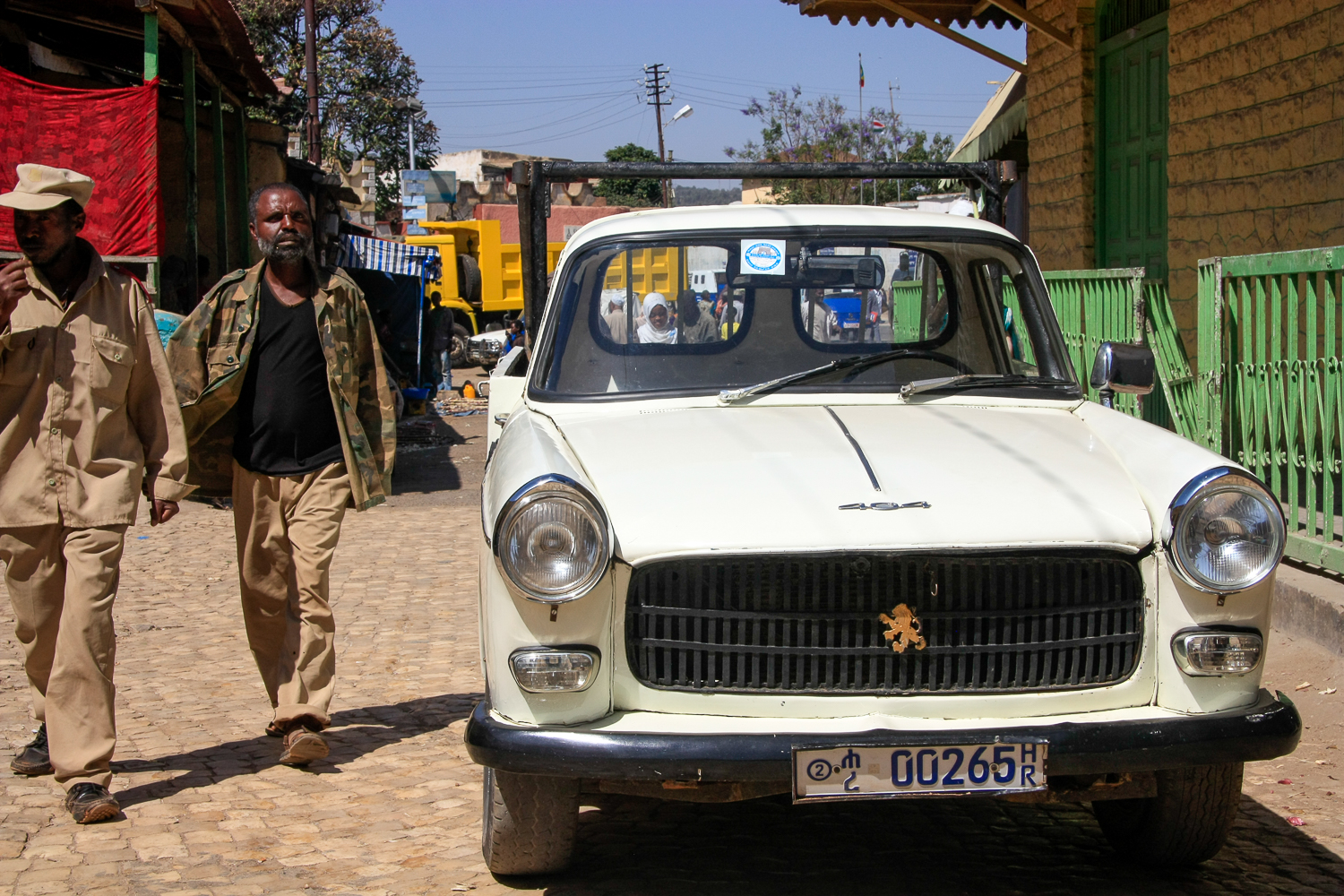 At night, the wild hyenas come out. Seriously. The city walls even include little mini-gates for the hyenas to come in and out to eat food scraps. But every evening for the last 38 years, from what started as a local Islamic tradition of Ashura (once a year, hyenas are offered a bowl of porridge, and the amount of it they eat forecasts the weather for the next year, plus wards off some evil spirits) and has now really just morphed into a daily tourist attraction, one man has been feeding hyenas meat just outside the gate, and the wild animals have become tame. No hyena-human incidents have ever occured. Having never seeen a hyena before, they looked almost…cuddly? 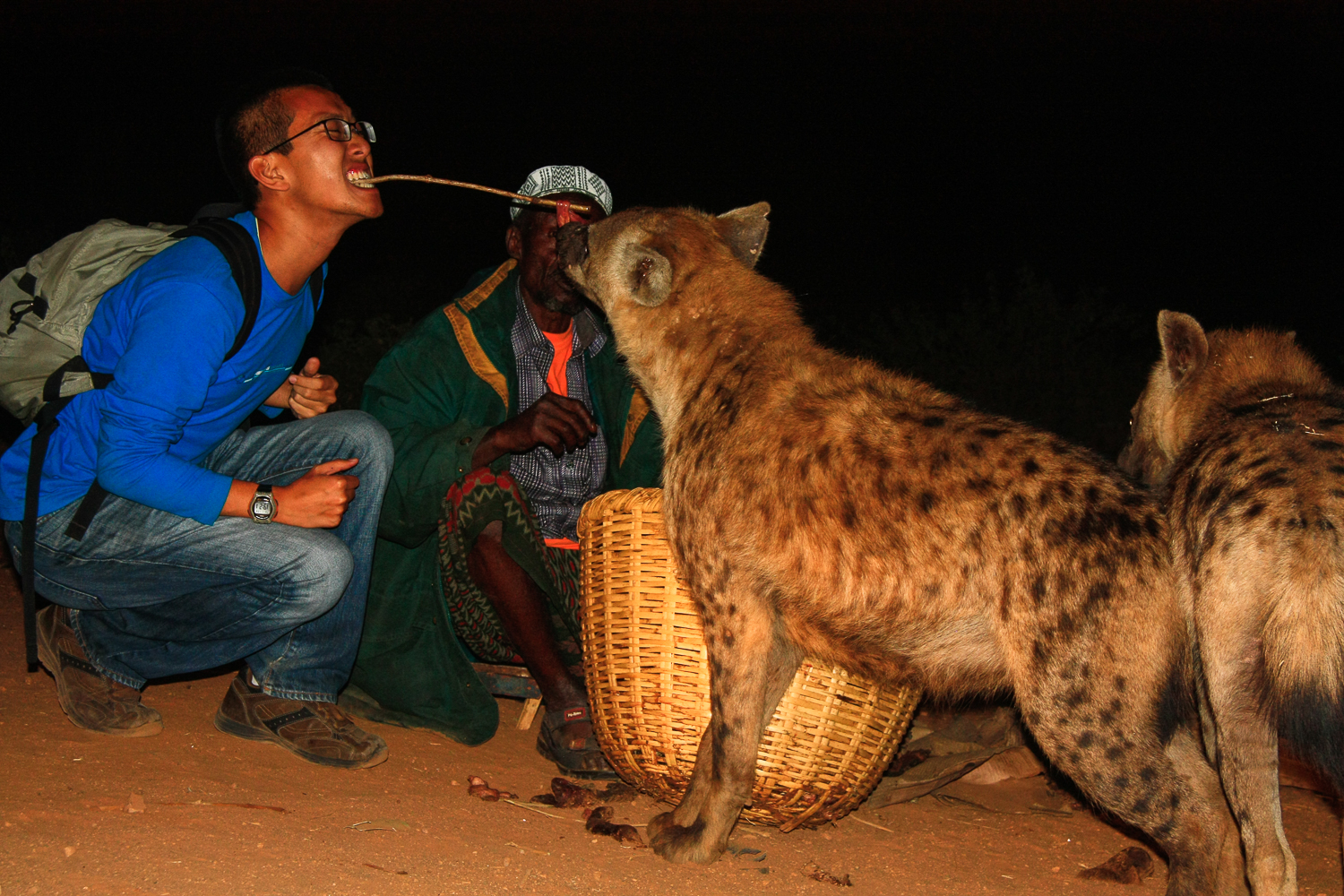 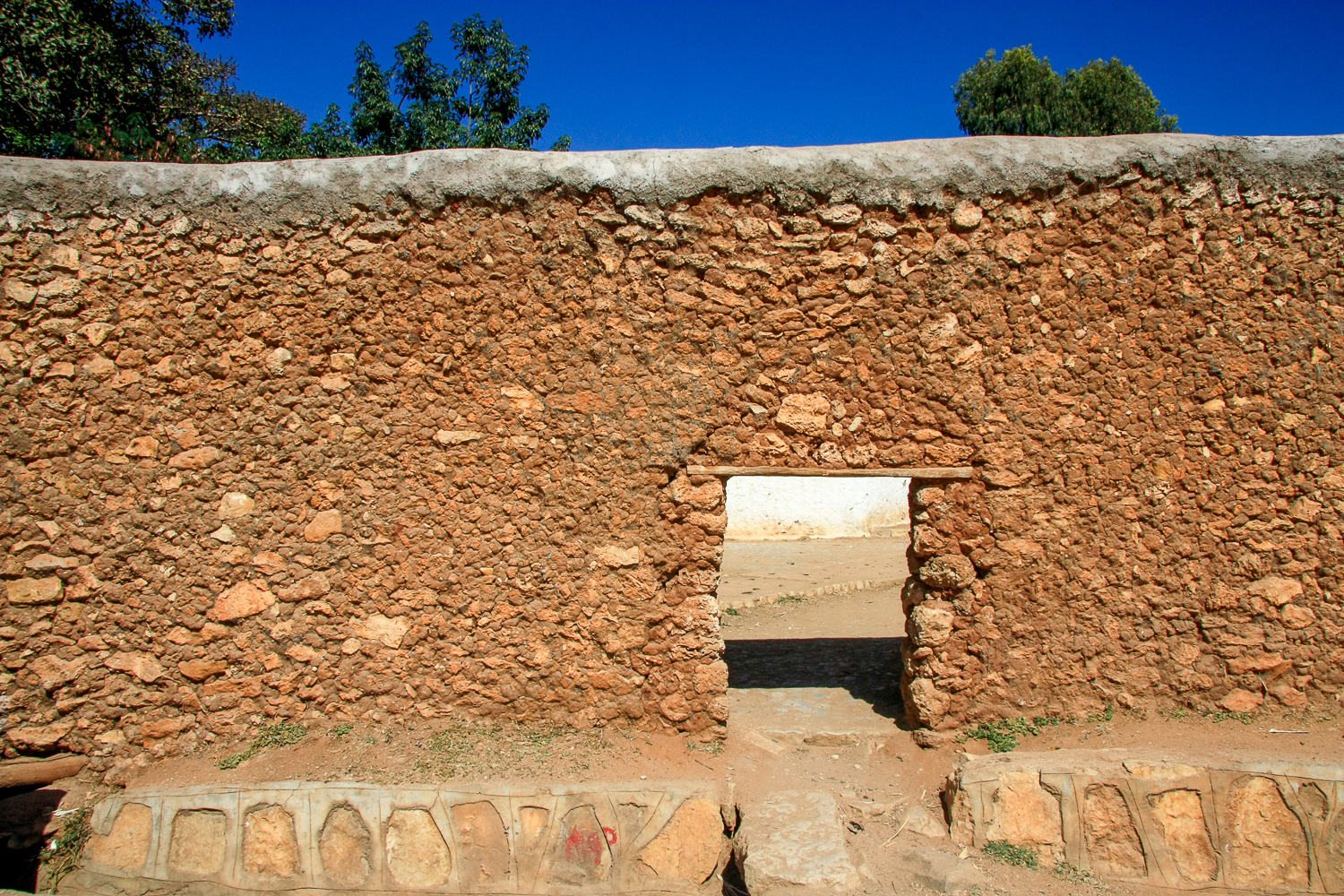 For a Muslim city, Harar surprisingly boasts a brewery — a vestige of the Menelik years. There’s also quite a drug addiction here: this is the center of the Middle East’s khat (“chat”) market. All over the streets, especially in the afternoons, men sit and chew leaves, often to the point of a dazed stupor, and sometimes just collapsed next to a wall. The majority chew it in moderation though, with the khat purportedly giving a light buzz akin to being mellow and awake at the same time. Women are the cultivators and sellers, but never the chewers. 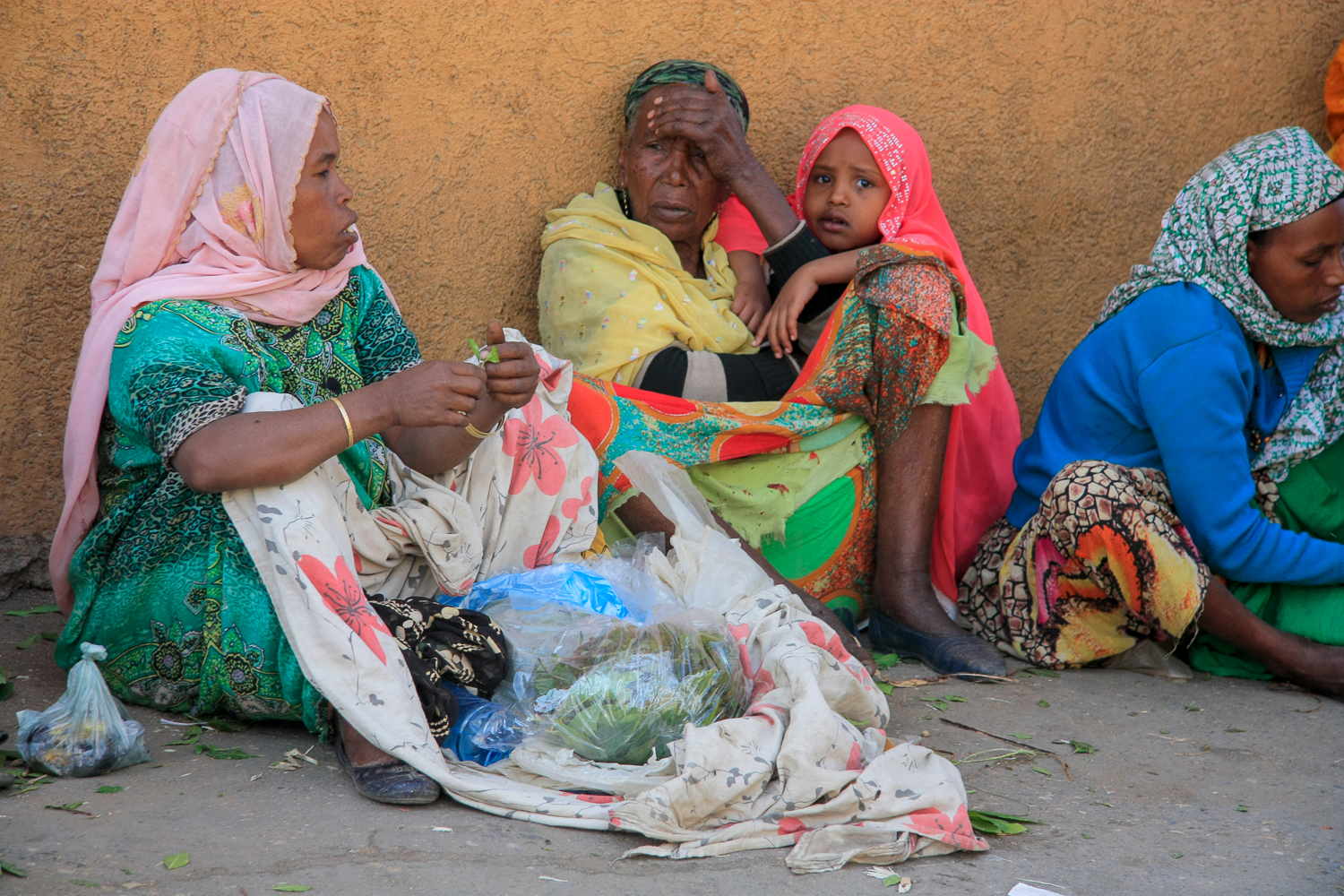 But the lax attitudes extend further from there. Though the old city contains a mostly-Muslim population, the new city is mostly Ethiopian Orthodox. (It’s practically impossible to sleep on some days, with the calls for prayer from mosques ringing five times a day, and the orthodox churches chanting for six or seven hours straight starting at 2 am!) They live in complete harmony, and respect each other’s holidays, with even most of the Muslim shops save for the essentials closed for Genna.

I stayed at a Harari cultural guesthouse — a converted home in the typical traditional style that still permeates in Harar. In an ordinary-looking compound, going through the door reveals a room covered in colourful plates and baskets, with a multi-leveled sitting area: one for esteemed guests, one for the owner (next to the spear), top, middle, and bottom levels for those who have fully, semi-, and not memorised the Quran, and one for women. Rolled-up carpets rest on a shelf above the door, one for each unmarried girl in the household. There’s a honeymoon suite for newly-married couples, a bed underneath the stairs for pregnant women, and a bed upstairs for postpartum women. And of course, 99 ceiling slats, for the 99 names of Allah. 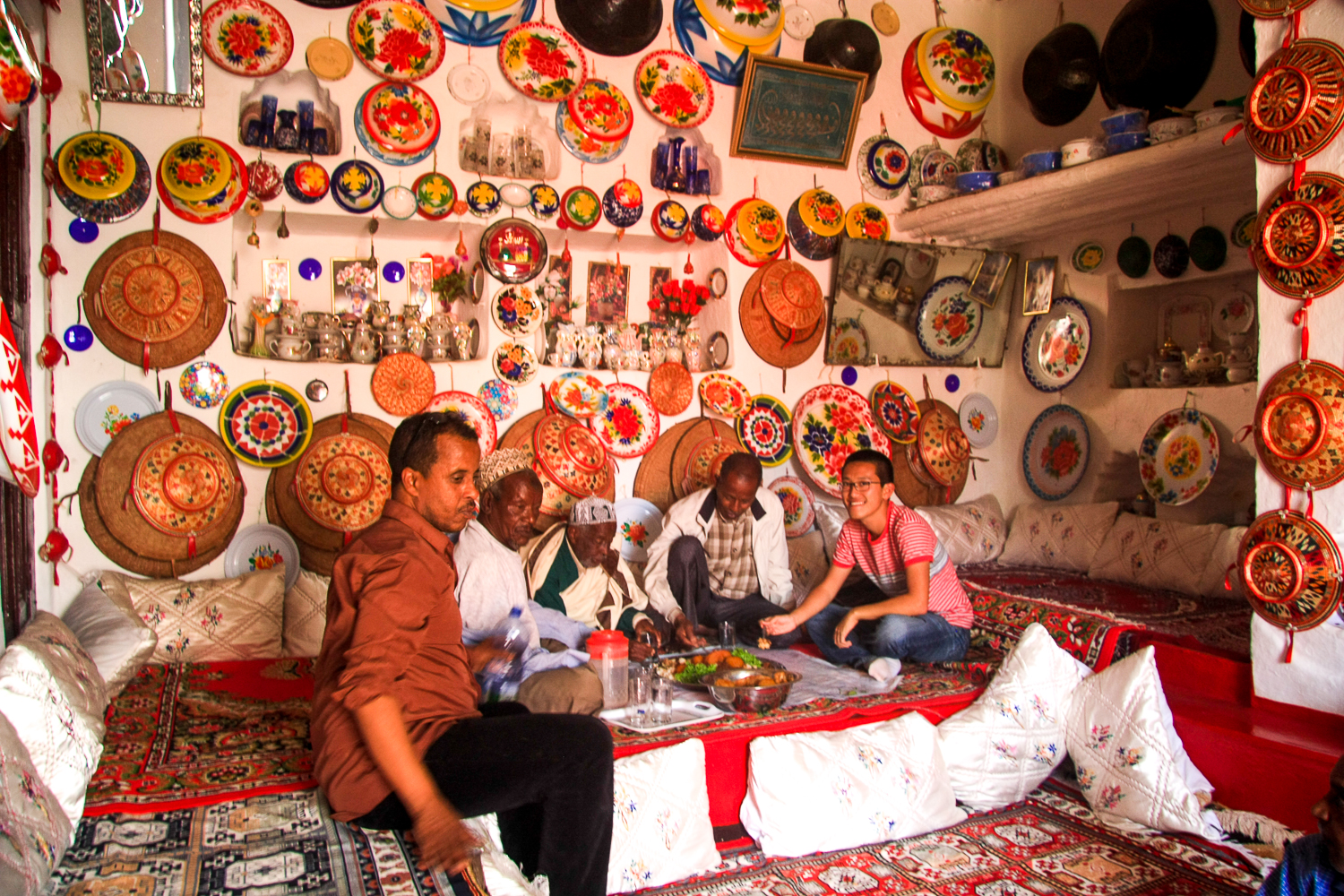 While a guesthouse, it still functions as part of a Muslim household. Hajera, our matronly host, was incredibly nice, and on Genna, she threw a big family party since everyone had the day off. Returning to the guesthouse late in the morning after visiting an out-of-town camel market and the Valley of Marvels, I was taken aback to see an enormous crowd on all levels of the sitting area, praying and chanting in unison (and some chewing khat). Before I could react, Hajera popped out from a corner and told me to sit and wait for lunch! My friends Caitlin and Zac, both of whom were not at that point staying at the guesthouse and came just to meet me, also found themselves roped into what became an incredibly lovely family feast of beef, potatoes, and rice eaten from a giant shared plate. Hajera’s brother, Badru, explained to us that their praying and dining together was an act of love, done once every few months, with extra food going out to the poor on the streets and alleys next to the house. With Genna being a Christian holiday, this really could have been a regular day for them, but having the day off as a national holiday freed them up to do something I would consider just as heartwarming as a Christmas celebration. 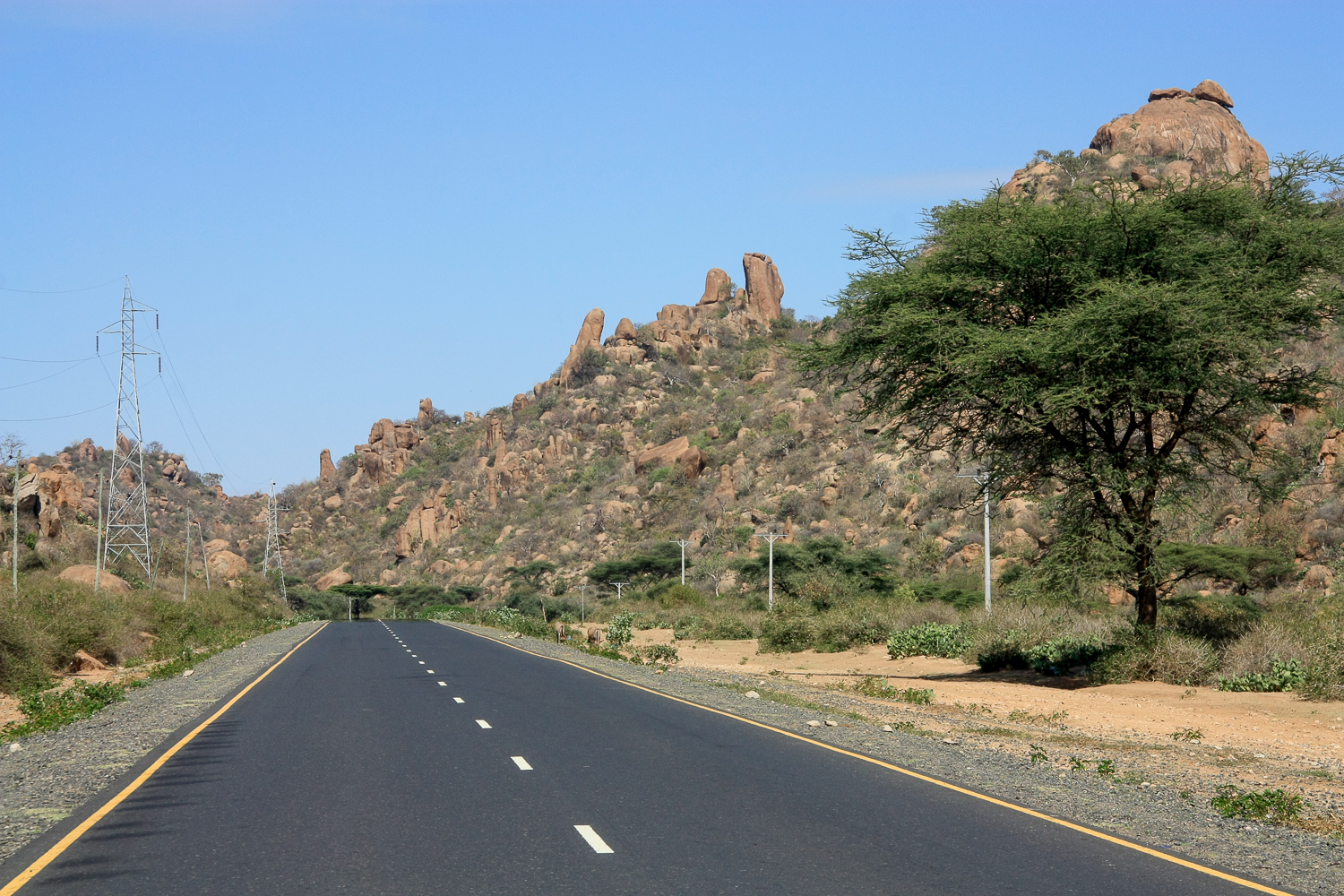 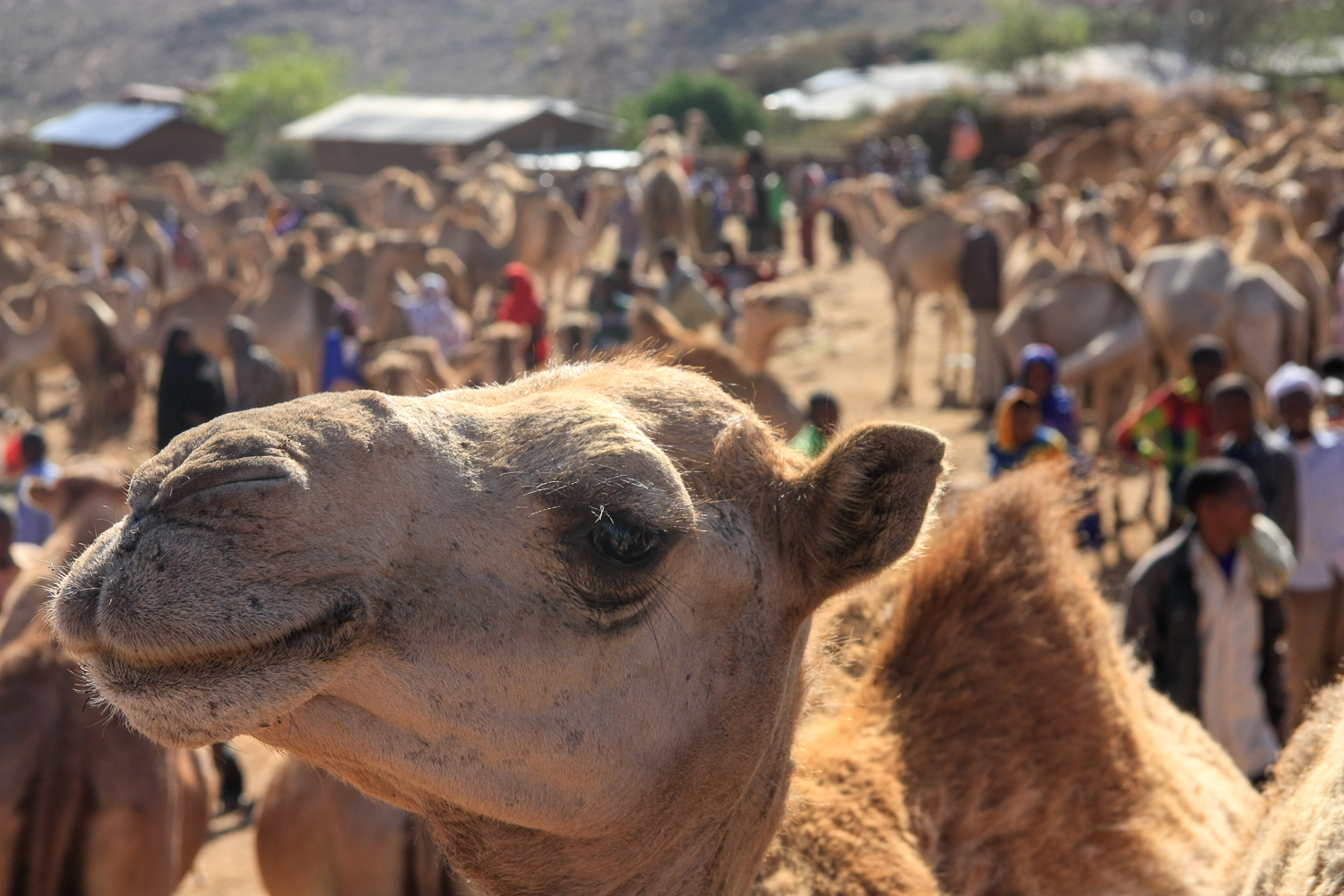 That camel’s got to know the 100th name of Allah.

As for me, I made sure to call up each of my new Ethiopian friends to wish them a merry Christmas, with it also being my final day in Ethiopia and my last chance to call with a local sim card. I admit I shed a few tears, but this is one country I definitely aspire to return to. Every corner surprises with such great differences, but each corner is proud to call themselves Ethiopia, flying the tricolour flag proud.

One thought on “Harmony”