Macau is currently quite well-known as Las Vegas of the East — although, given how much more money is involved here, maybe Las Vegas should be the Macau of the West. Anyway, gambling. Not what we’re here for. But through a relative’s friend that does go to Macau on the regular exactly for that, we scored a free night’s stay at a swaaaanky hotel (with a casino attached that we just ignored), along with the fast ferry tickets. Yay, free trip!

What interests me far, far more though is Macau’s history relating to Portugal. Macau (Oumun in Cantonese) originated as a trading port established by the Portuguese, who were later given the land by China in a far less acriminous manner than the UK with Hong Kong — the Portuguese first considered Macau a colony, but later a “Chinese city under Portuguese administration” prior to returning it back to China in 1999. Like Hong Kong, Macau essentially acts as a country in all but name, with its own flag, passport, currency (Macau pataca, pegged at HK$0.97 but used interchangeably), and legal system. Portuguese is still an official language alongside Cantonese, and bilingual signs here seem so weird to me, especially in particularly Hong Kong-looking areas! Even bus routes are in Chinese and Portuguese, with no English. (Though finding someone that speaks Portuguese another matter — you’re far more likely to find English speakers.) 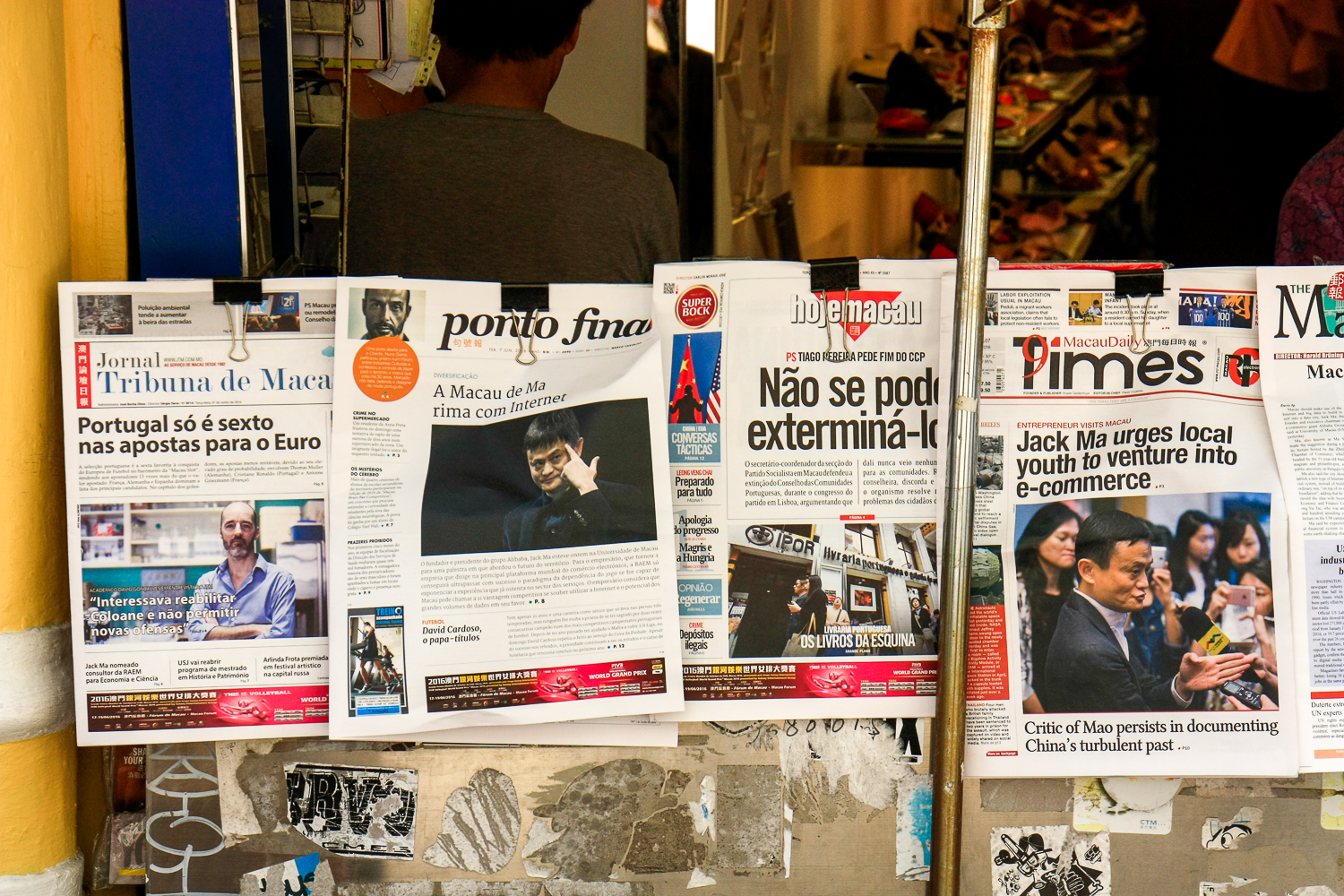 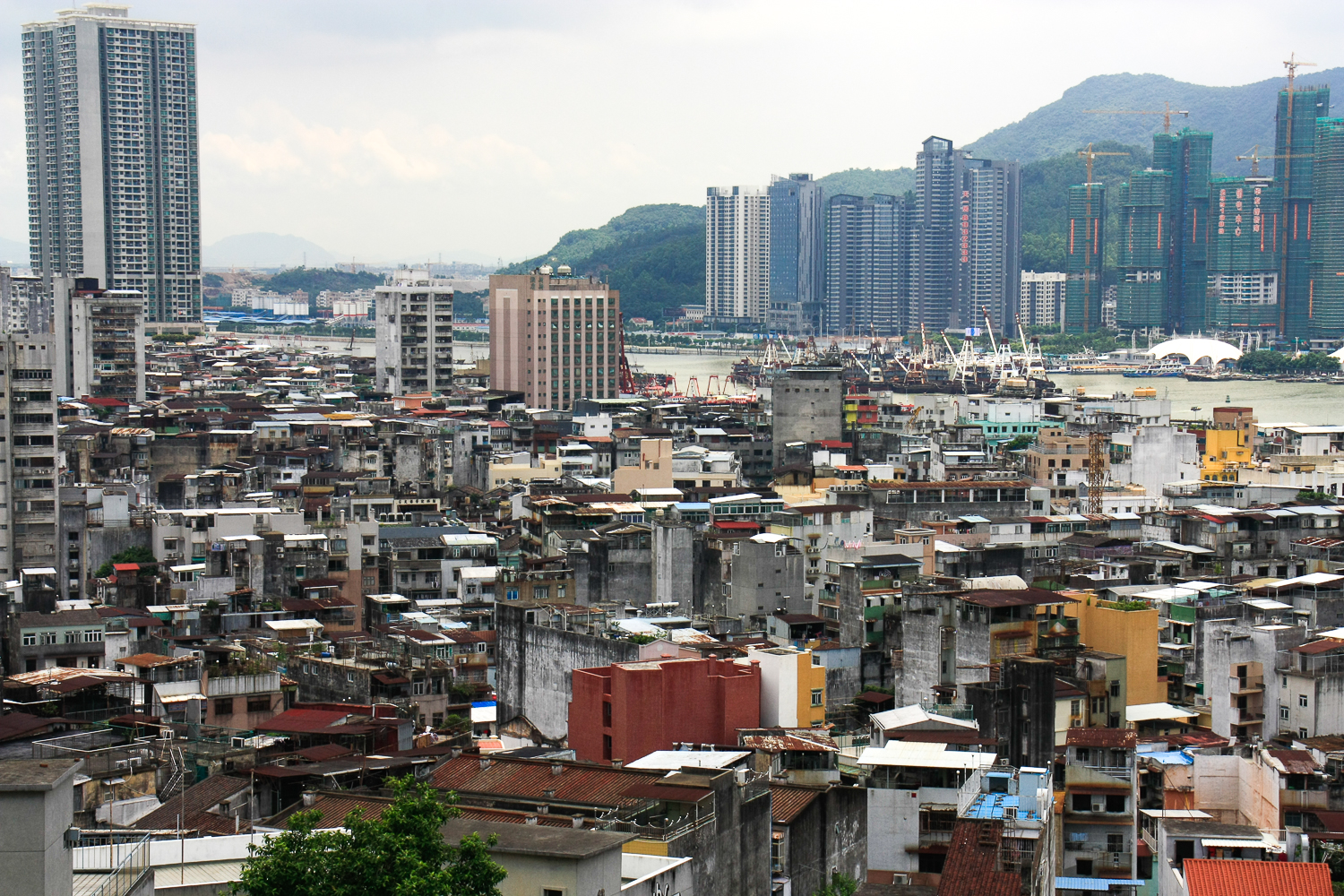 With much of the old city being Portuguese-built, there’s a great deal of beautiful colonial architecture. The first glimpse of the Largo do Senado would lead you to think that you were in Europe, with its ornate hand-laid stone designs. But walk a little bit, and then the Chinese influence clearly creeps in, in the style of the houses. Eventually, it turns more into a “Portuguese church here, chaotic Chinese street there” contrast, and there’s really nothing like it. Walking to the famed ruins of the São Paolo cathedral led us past colonial buildings, Chinese houses, colonial churches, and Chinese temples. 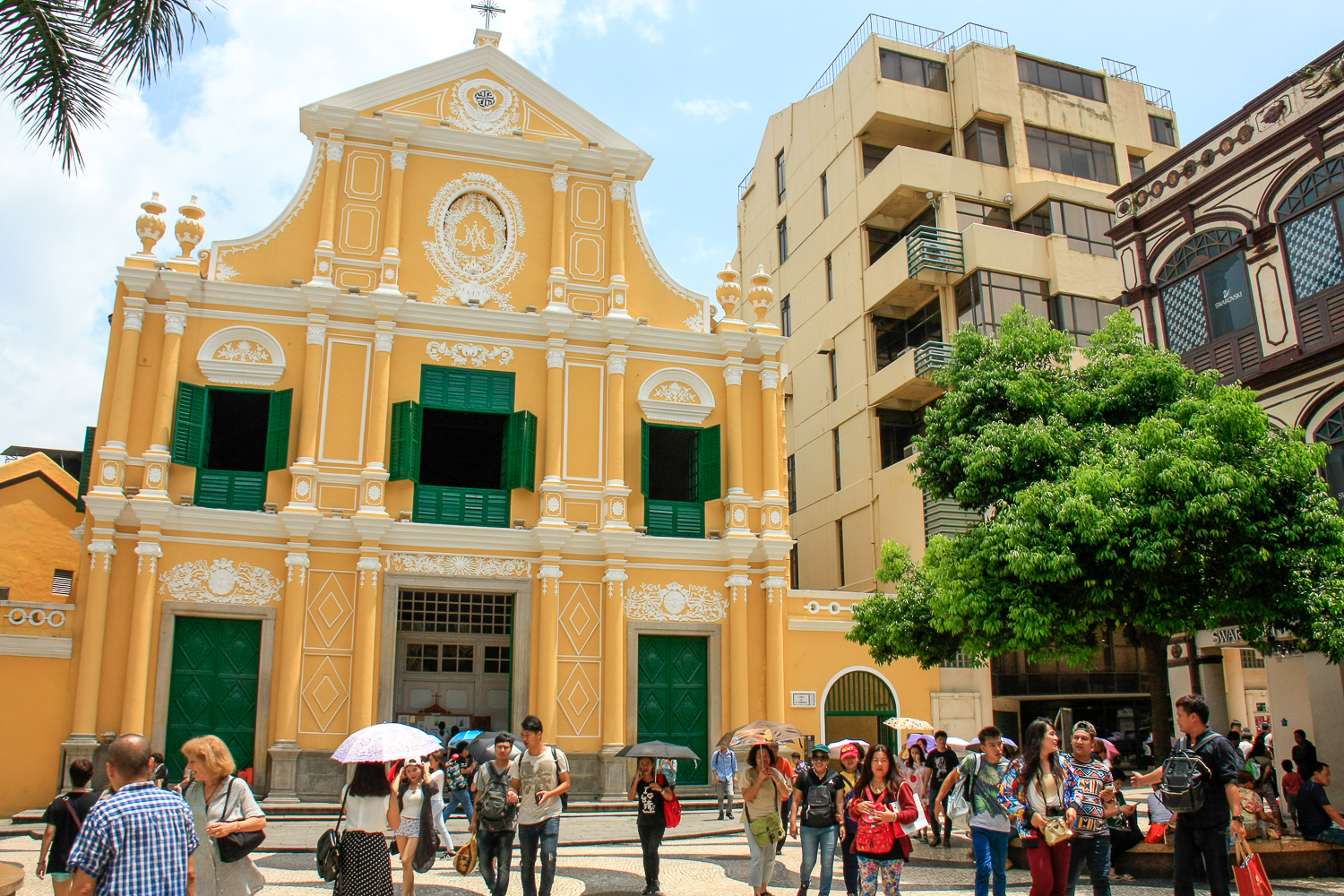 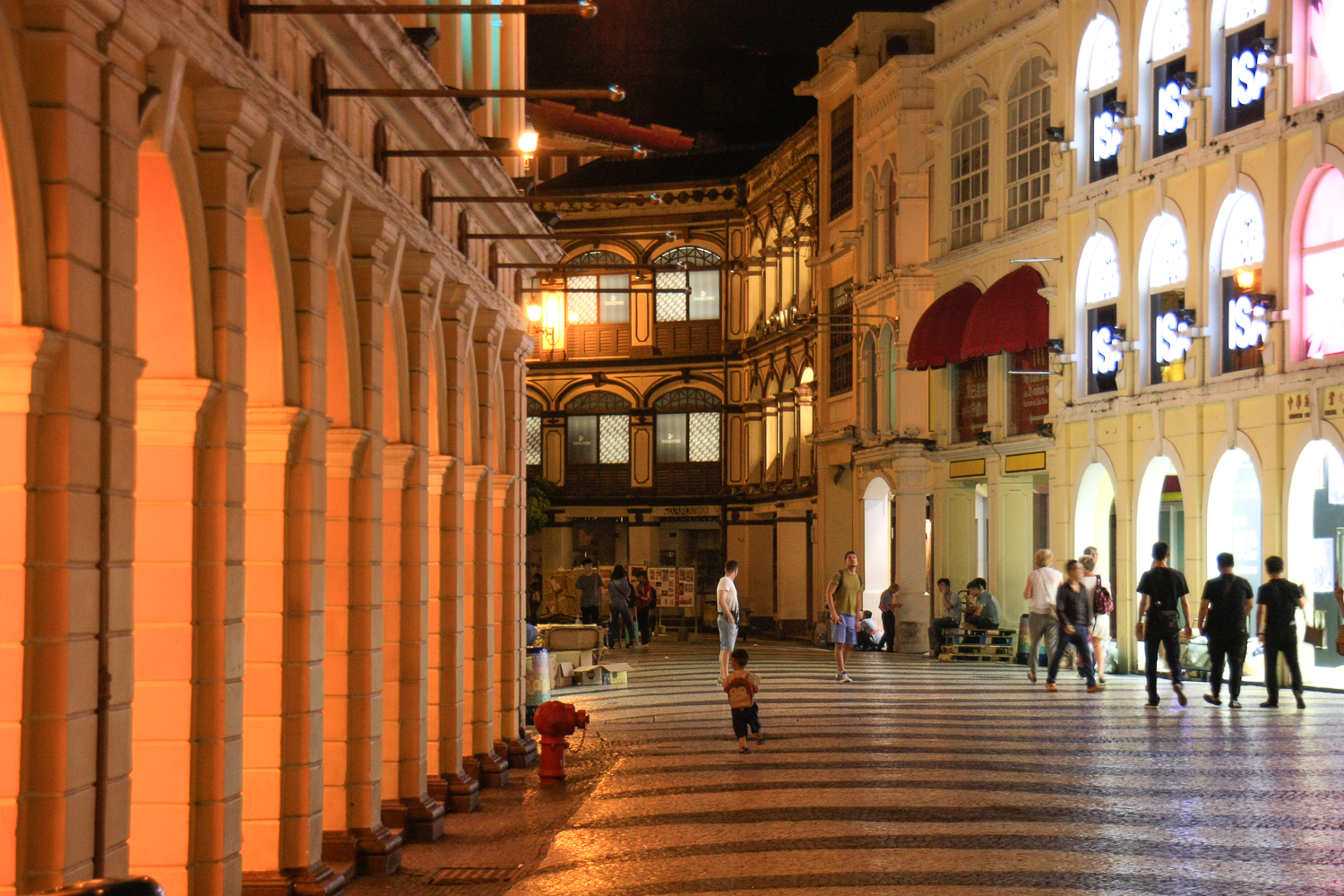 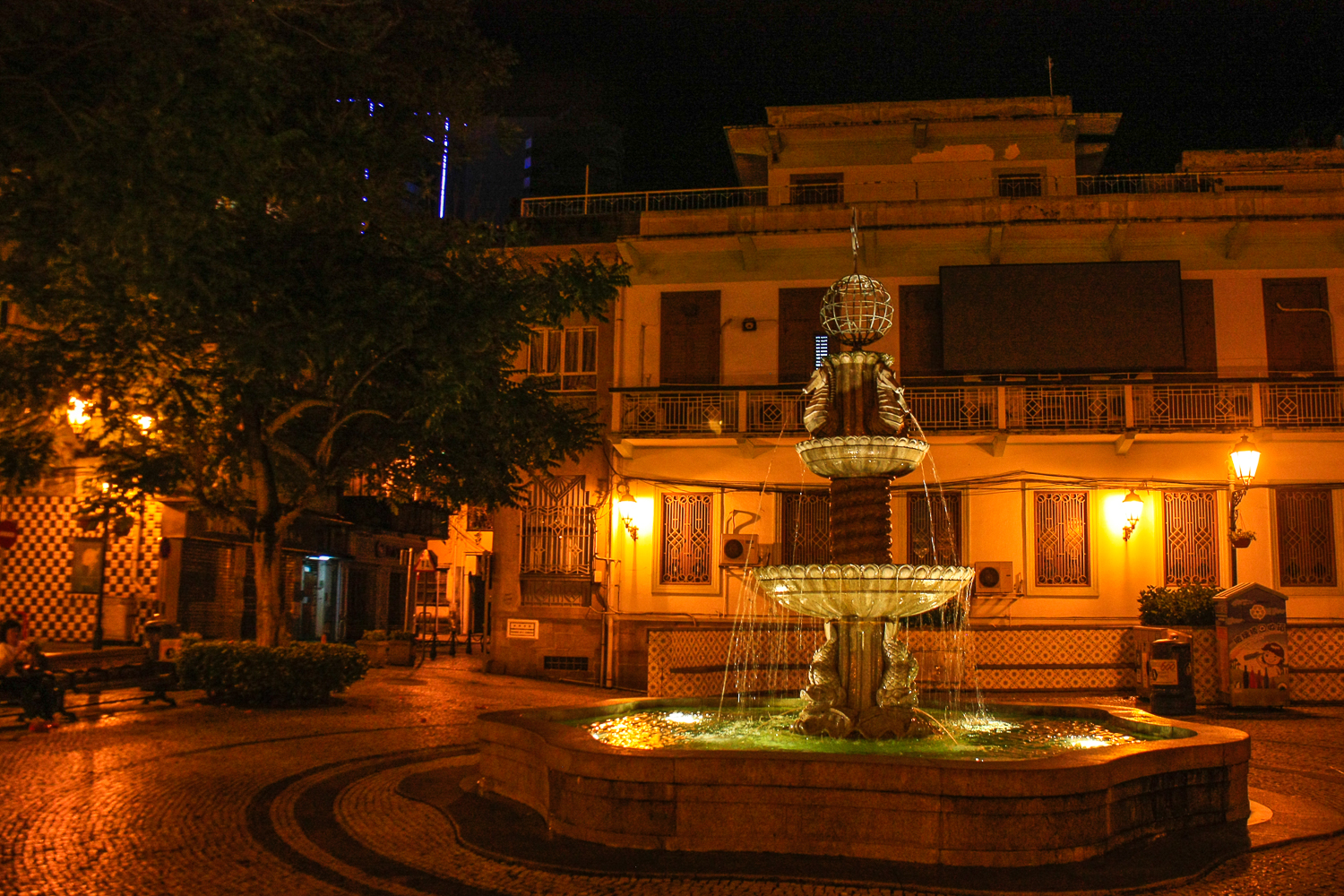 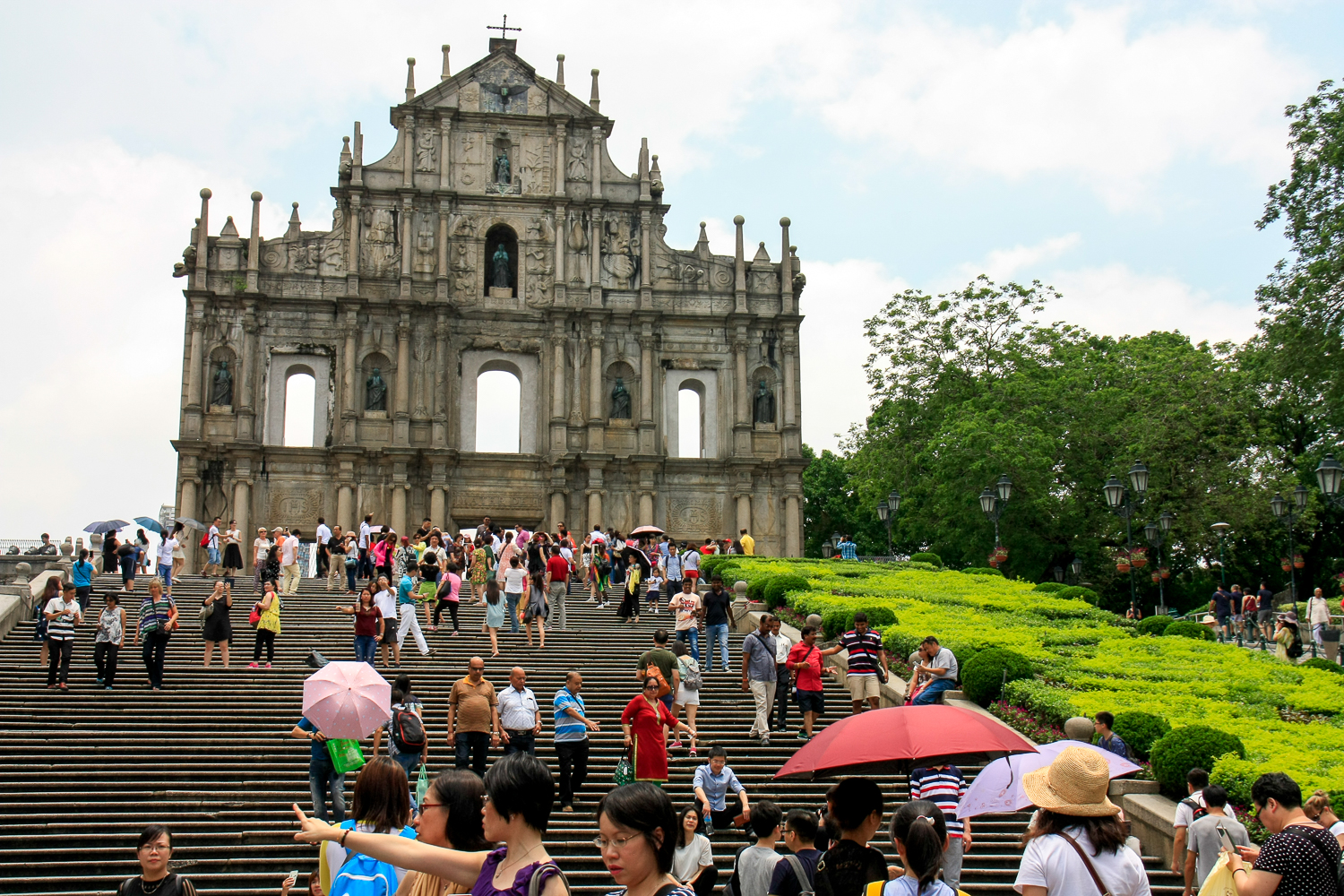 A little further from the city centre, there’s even old an Chinese mansion that you can wander through, next to a street lined with pastel-yellow houses and hanging flower baskets. 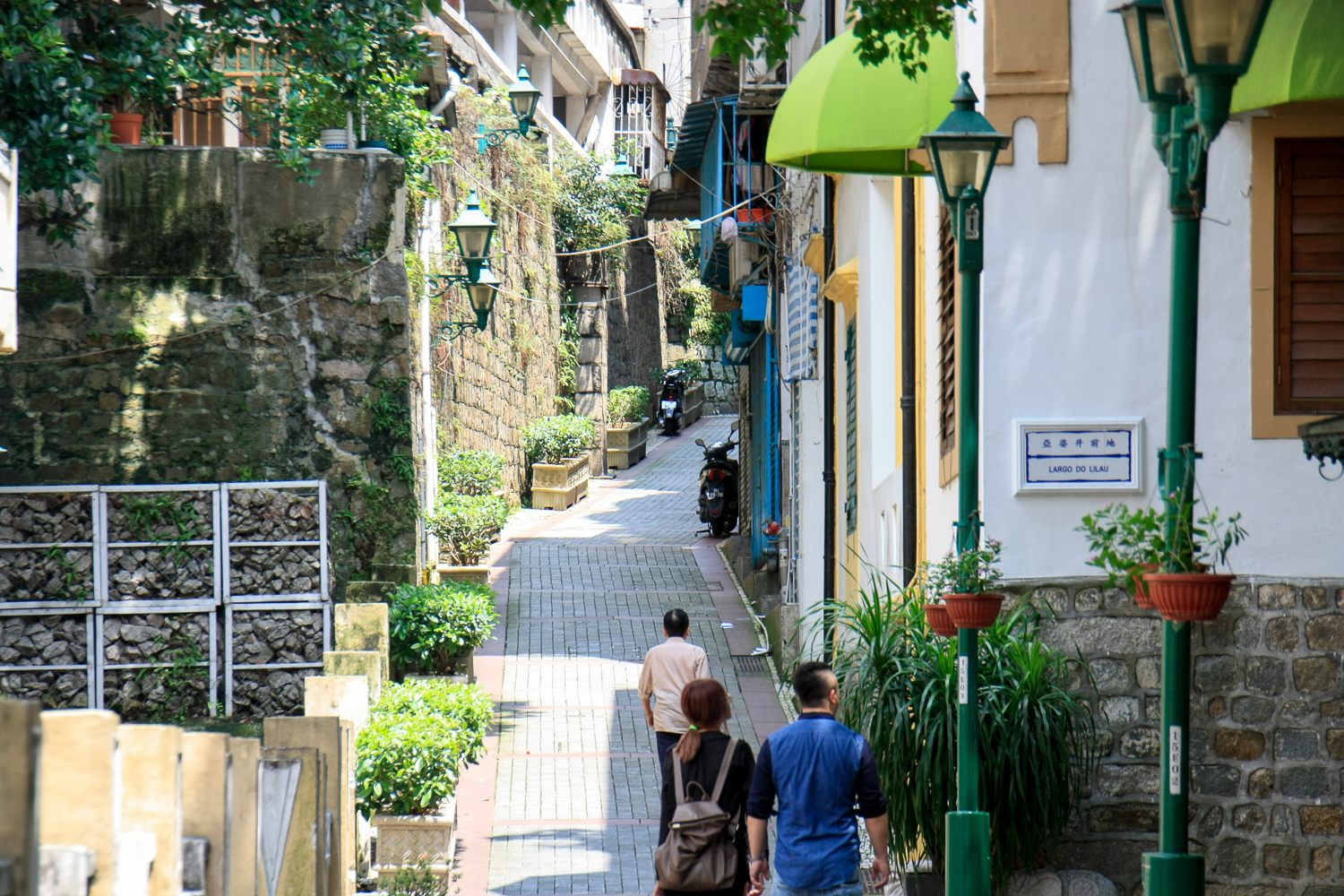 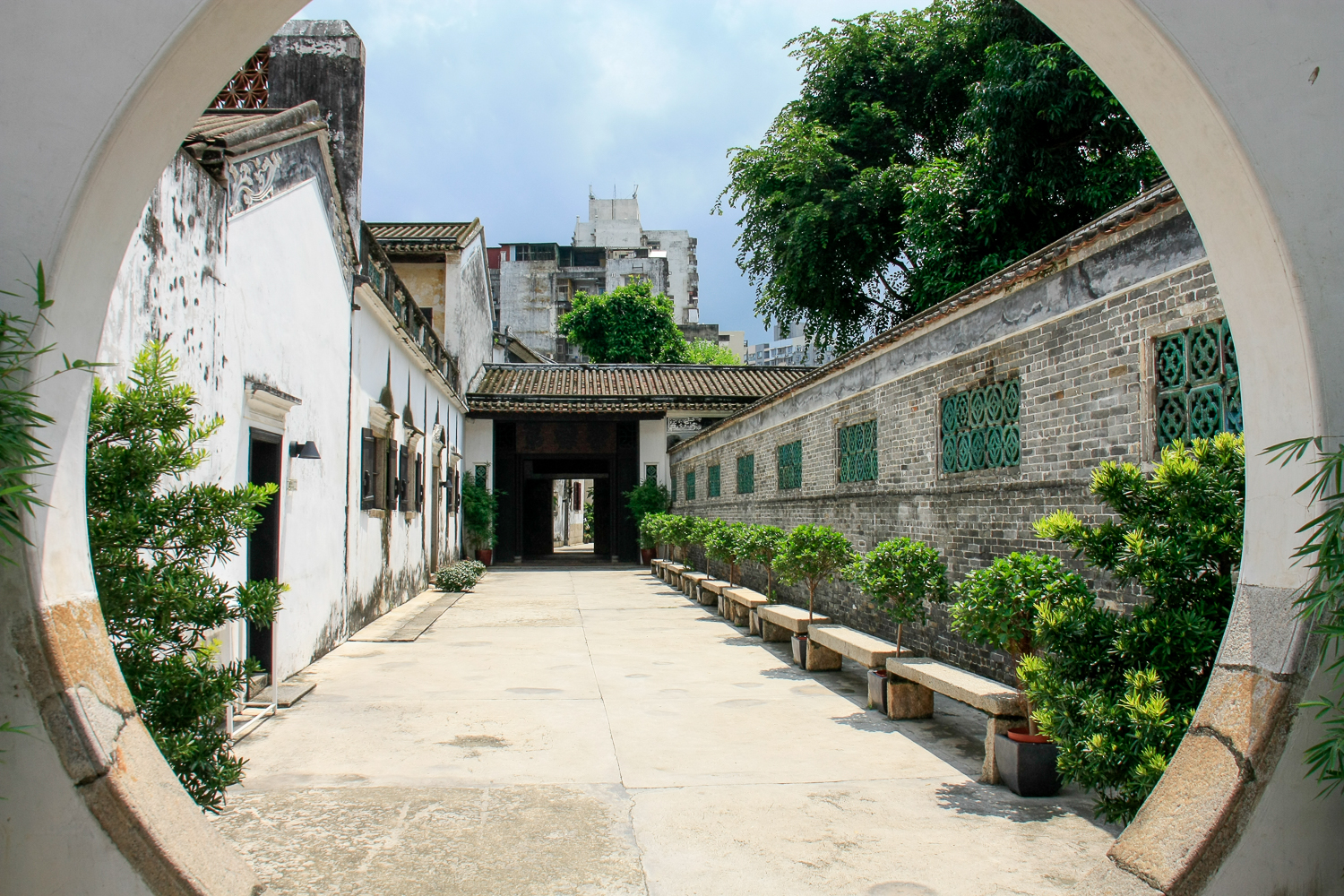 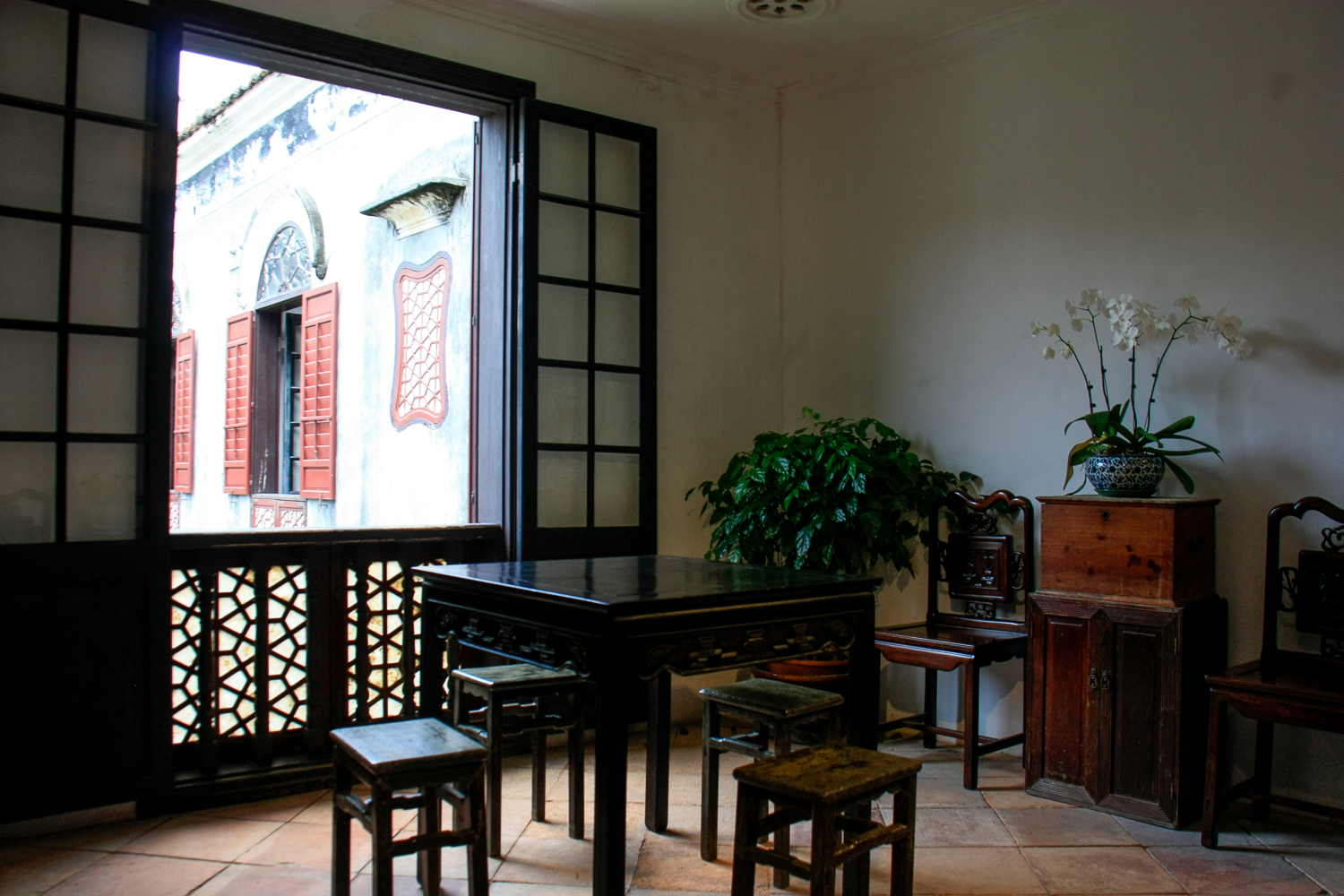 Across the strait via one of the three very, very long bridges, we visited the village of Coloane, far away from the center, where we saw a true fusion of Chinese and Portuguese influences. For one, there actually were a few Portuguese speakers around. But amongst the orderly Chinese residential streets, there’s Portuguese street signs, colourful buildings more akin to Europe but decorated with Chinese shrines, a beautiful church and brick-layed boardwalk facing mainland China, and the same streetside restaurants you’d typically see serving cheap HK-style food instead serving European-standard bread and Portuguese-influenced food made with typically Chinese ingredients. You’d probably never see squab or choi sum on a menu in Portugal, and yet the dishes tasted Portuguese, with coconut milk and strong spices — Macanese, I guess! 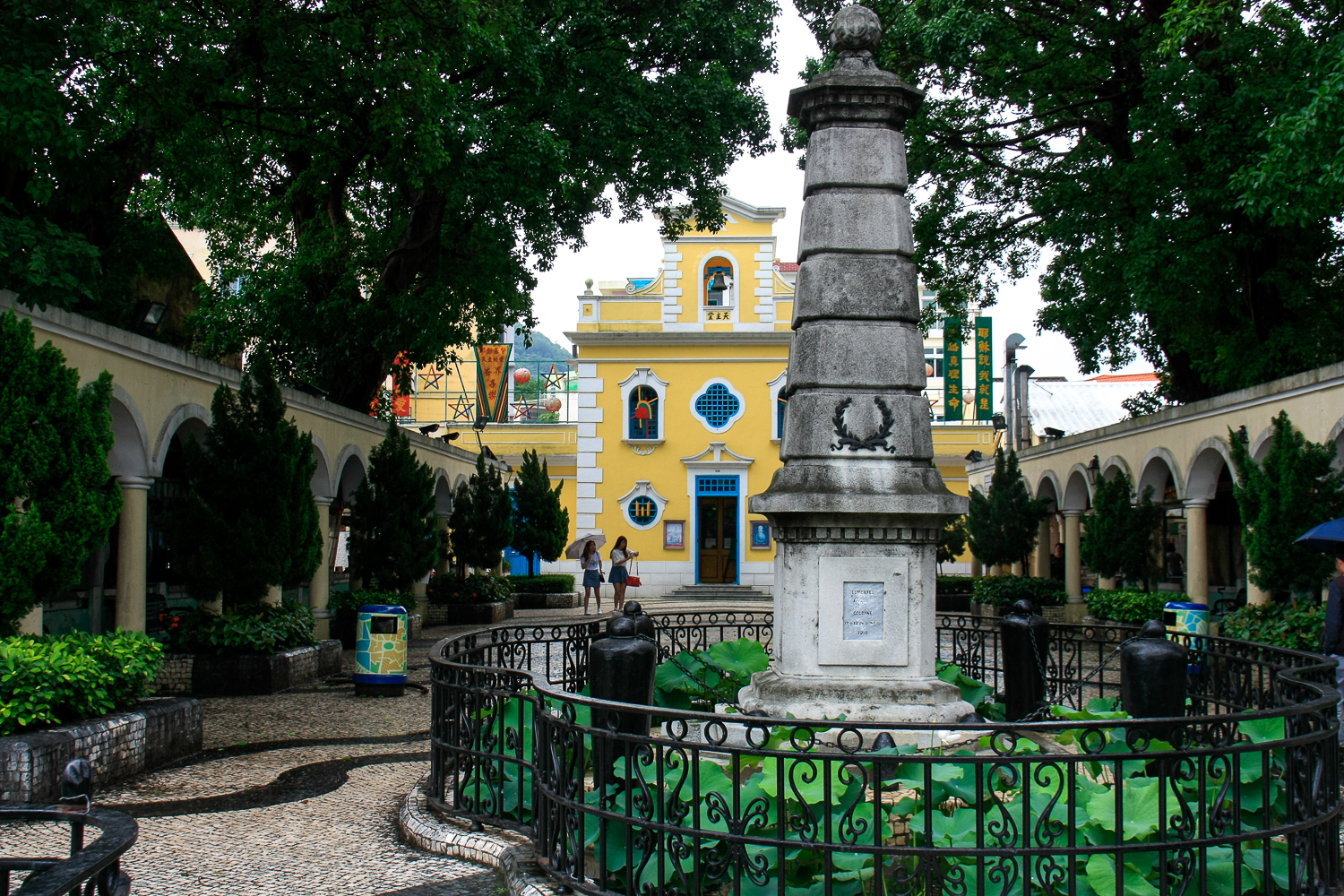 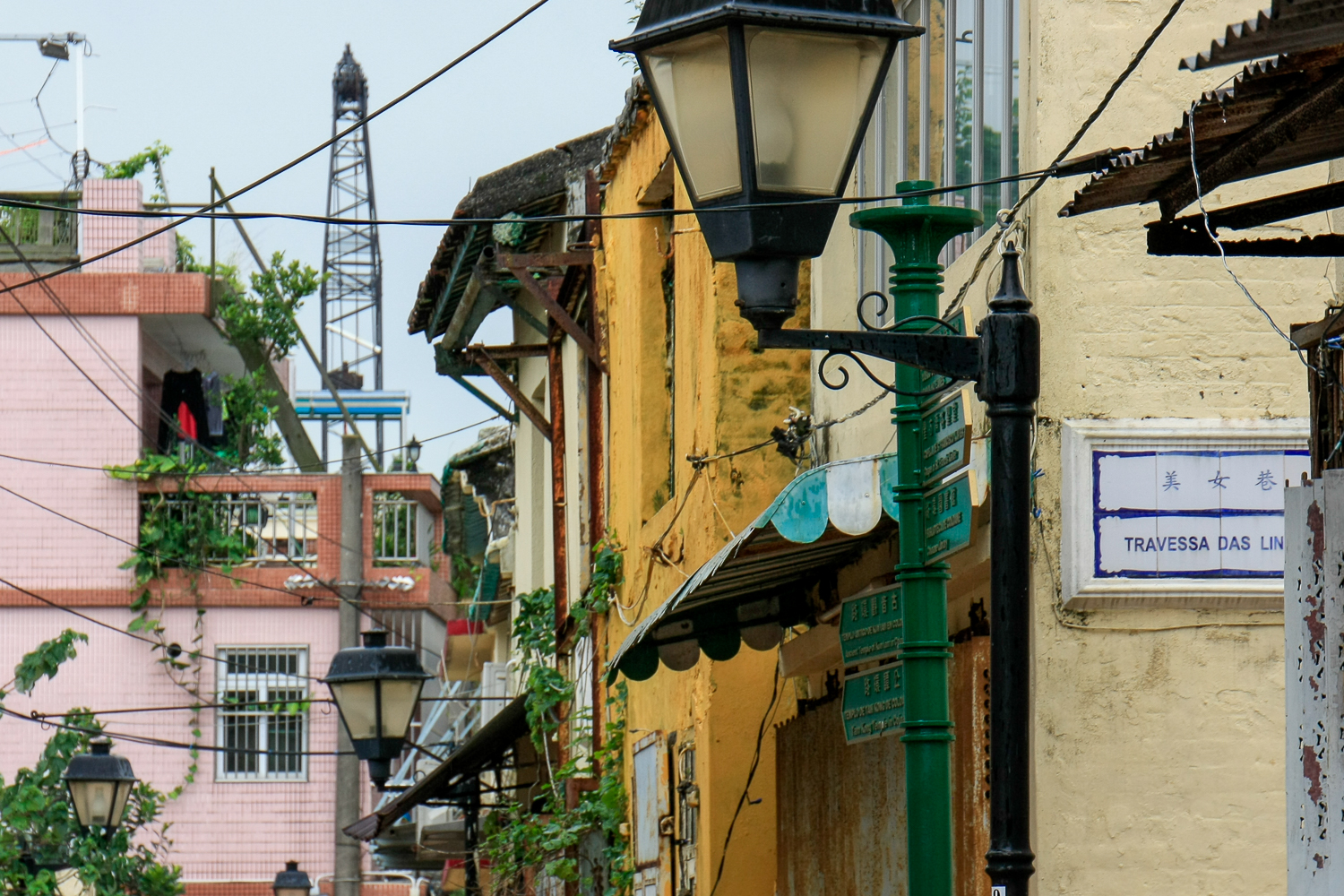 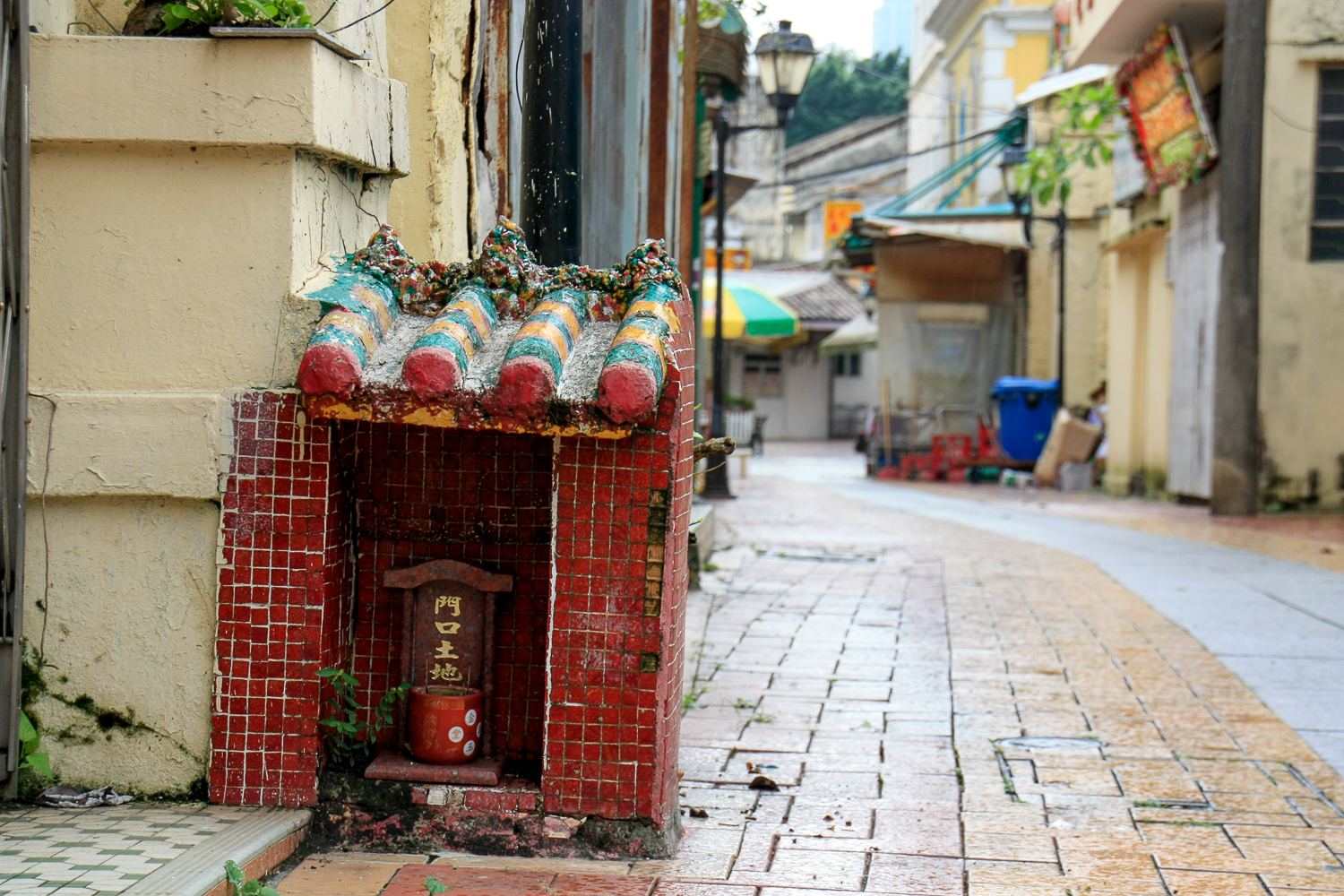 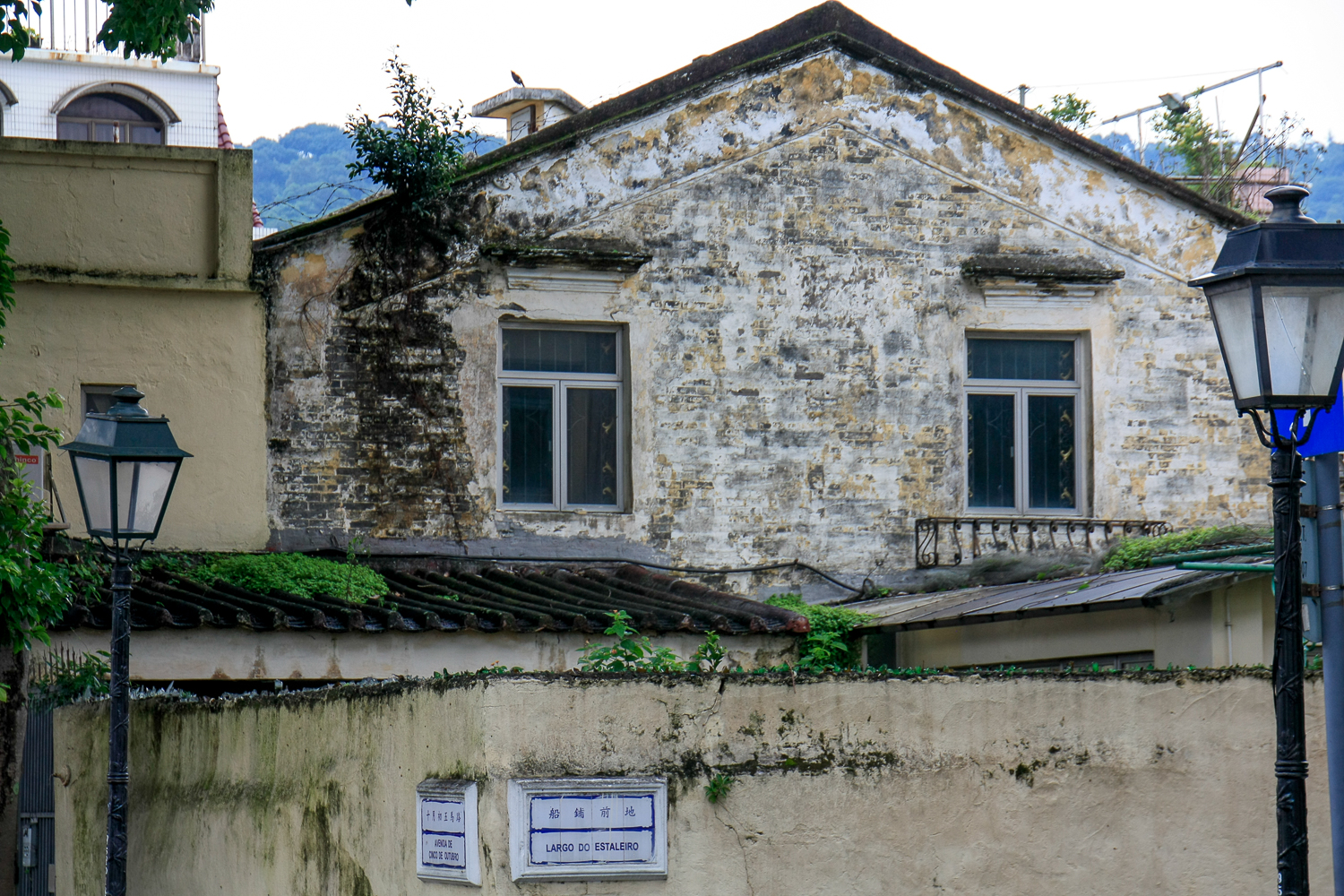 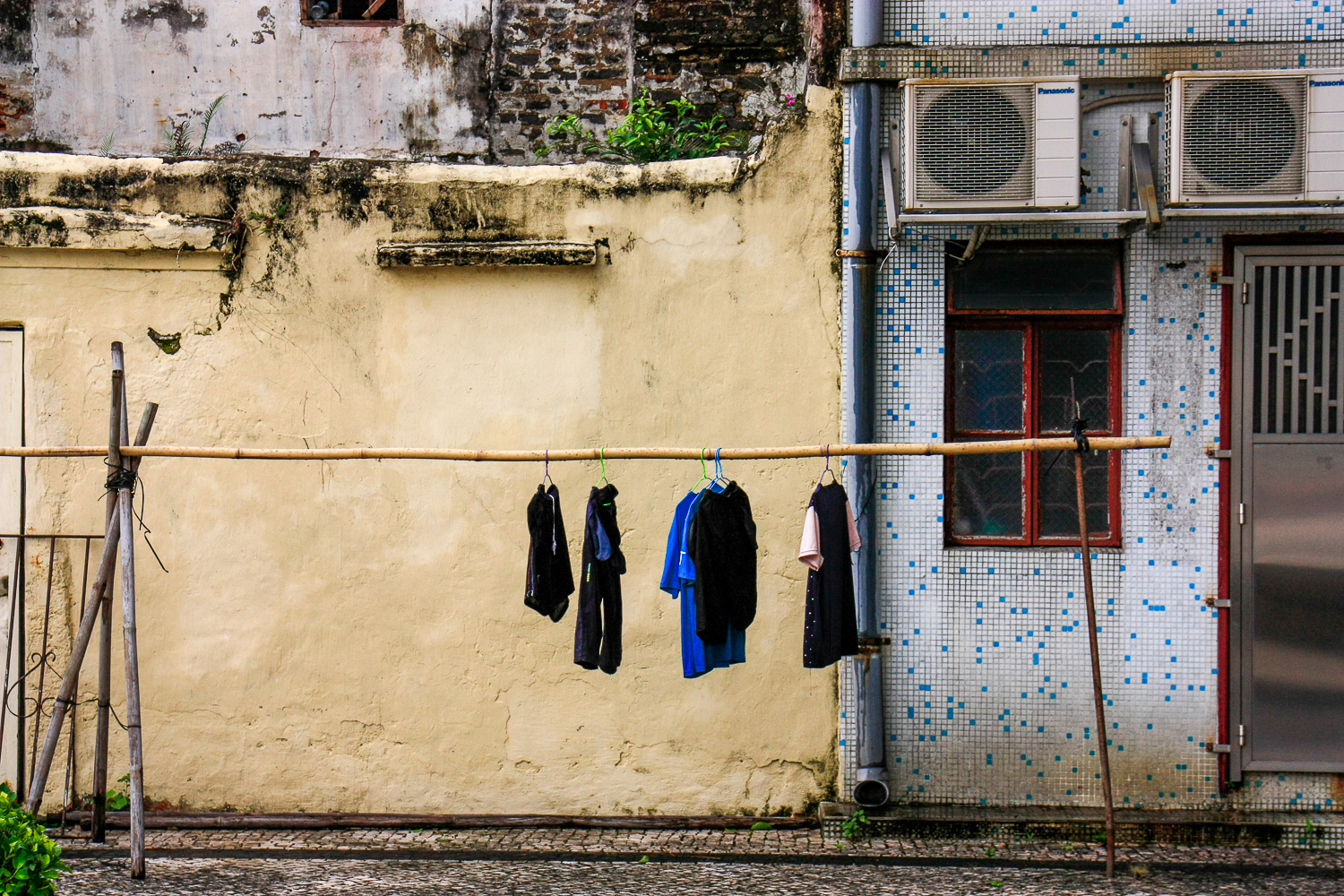 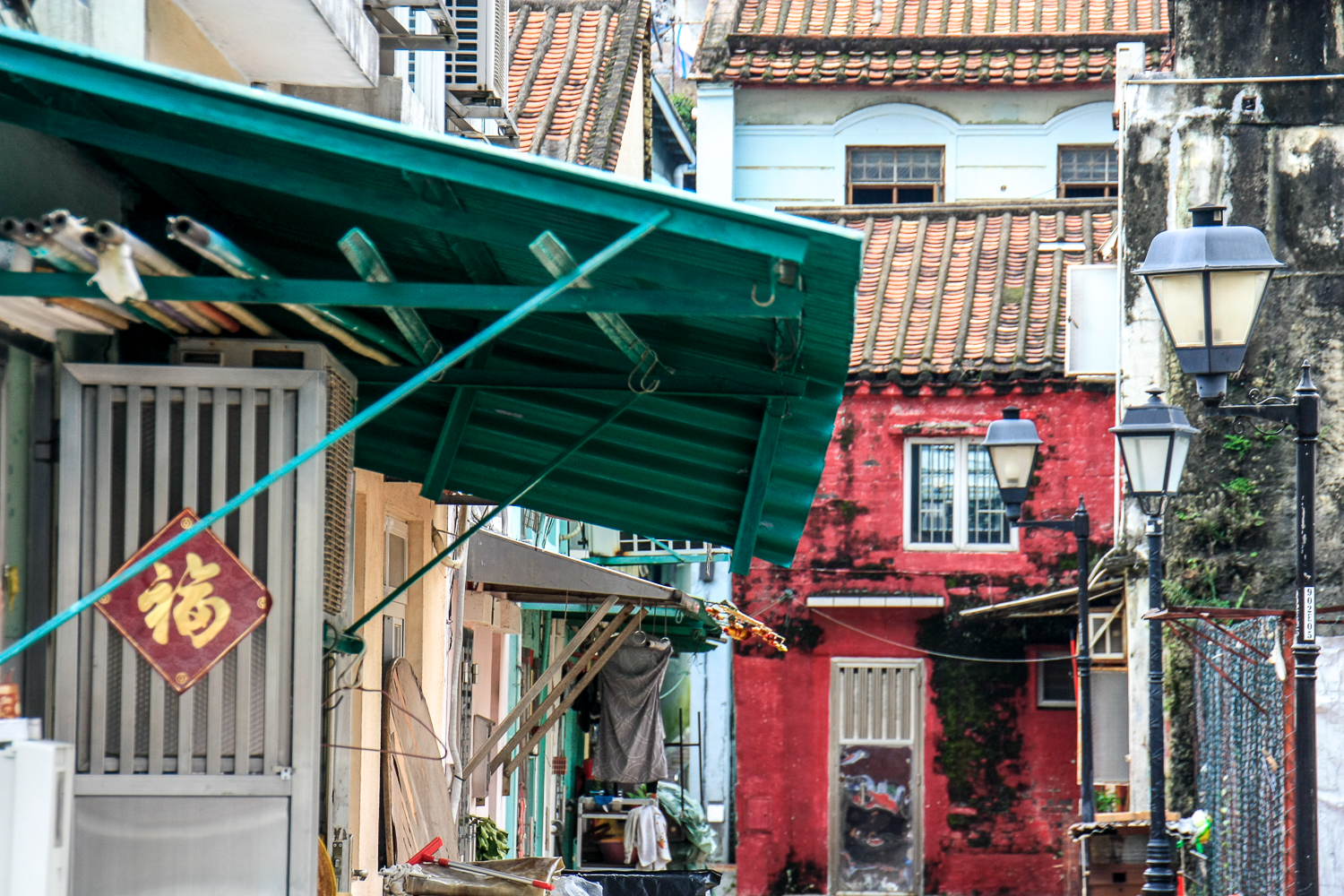 And this culture clash seems to manifest itself the most in Macau’s food. There’s Macanese food, galinha à portuguesa (coconut curry baked chicken rice, not actually from Portugal) and pasteis de nata (Portuguese egg tarts but with a local filling), but then there’s strictly Portuguese food — found in high end restaurants complete with a Portuguese chef and Portuguese clientele — and strictly Chinese food too. Even some of the Chinese food here is unique to Macau: steamed milk pudding (like eating a cloud of milk, with a sublimely thin skin of milk curd on the top), pork chop buns, shrimp roe noodles, and then there’s whole streets full of snack/pastry shops selling other famed Macanese items like sweetened meat jerky, almond biscuits, sweet flaky egg rolls (which are biscuits, not the savoury kind you get at restaurants). A lot of these things are now also found in Hong Kong.  My family and I basically stuffed our faces walking down a single street, being offered free samples from competing shop employees frantically shoving them in front of us. 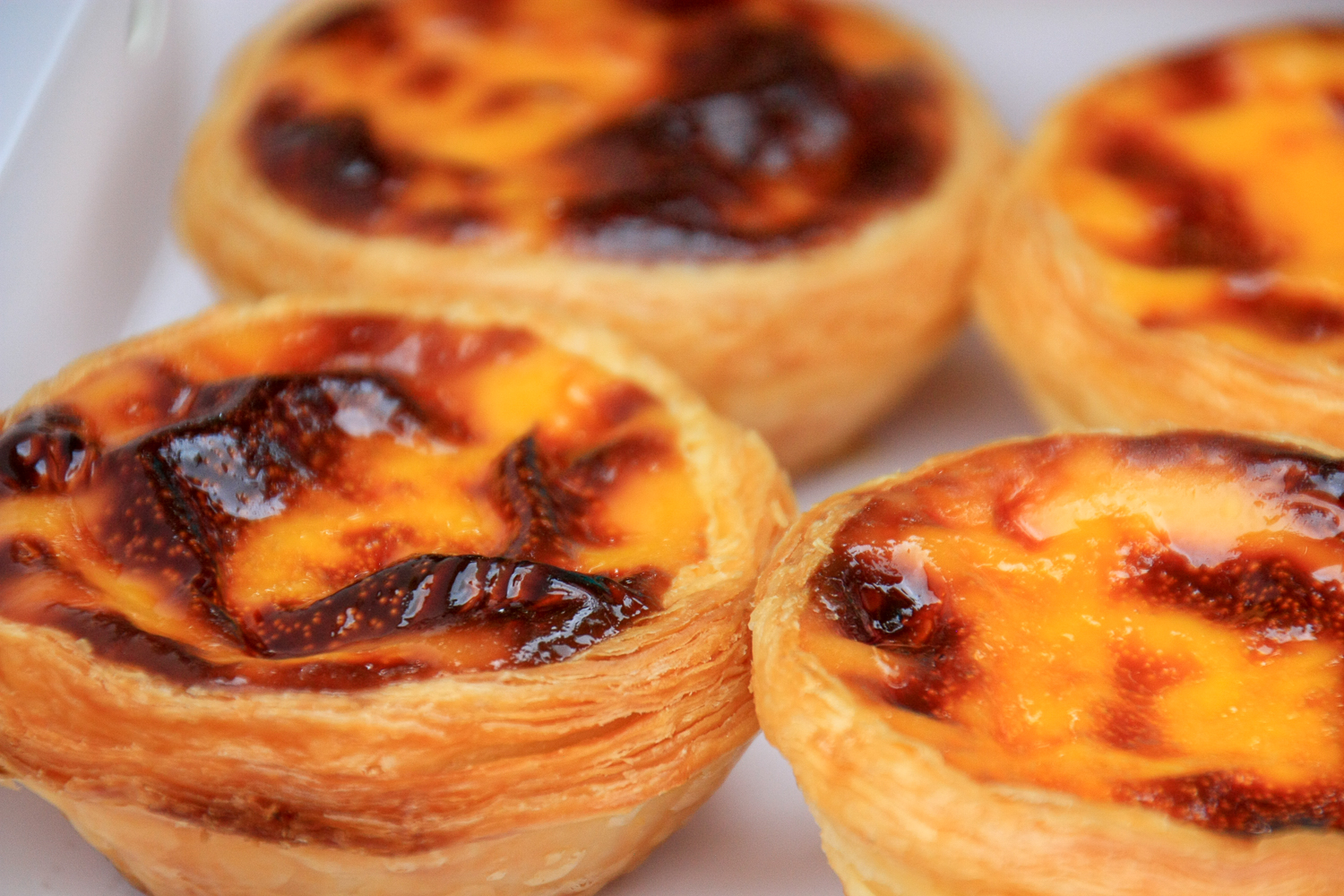 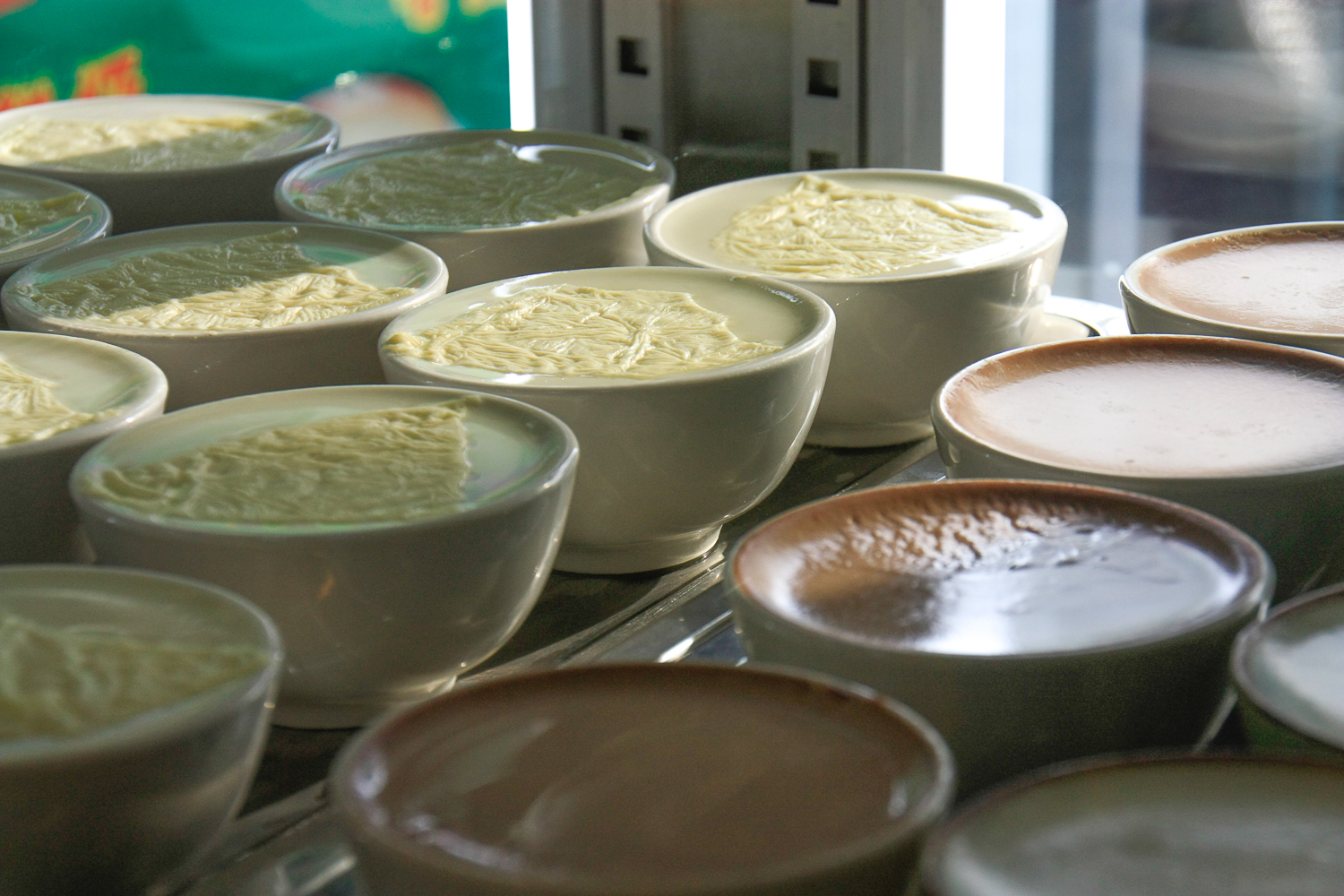 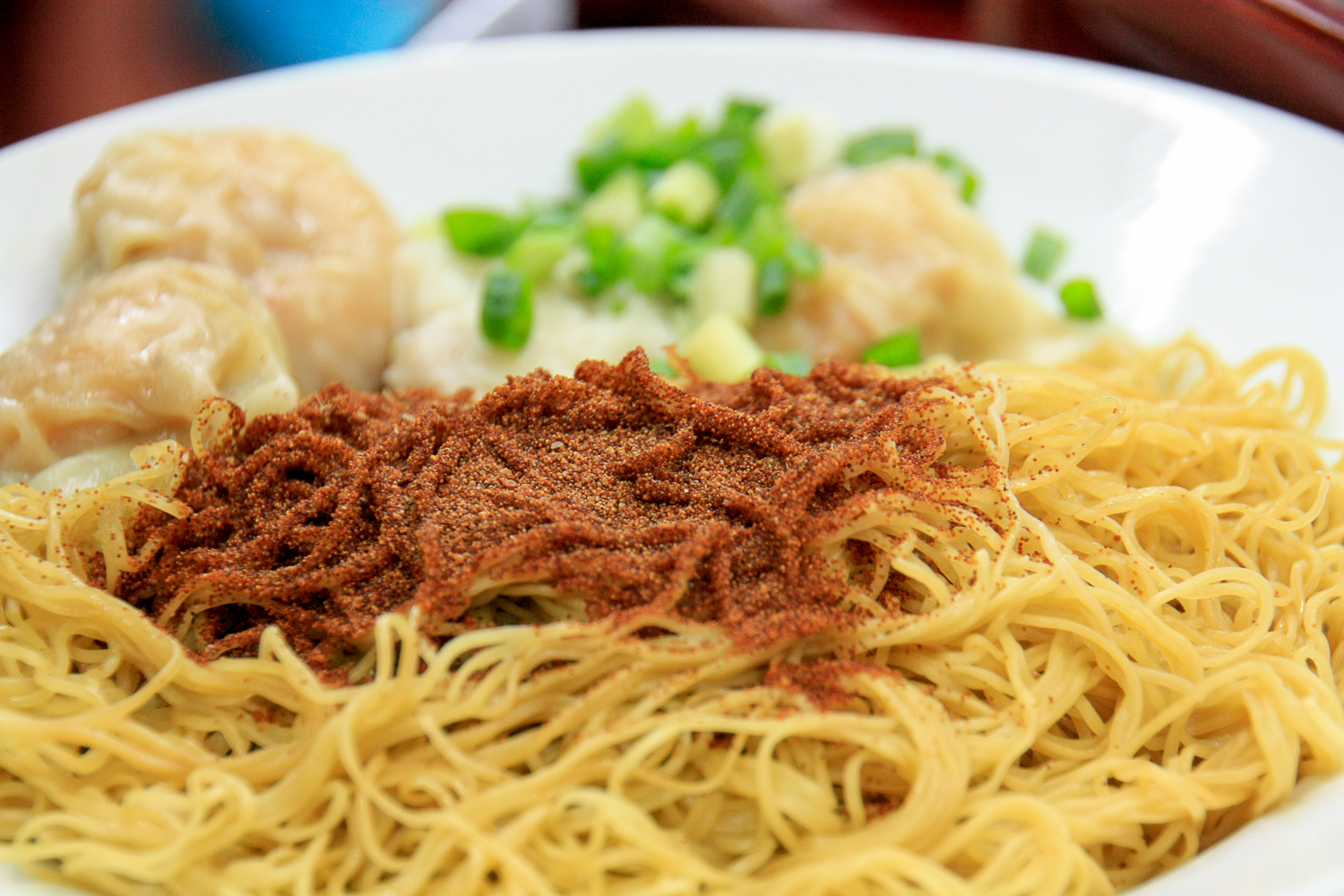 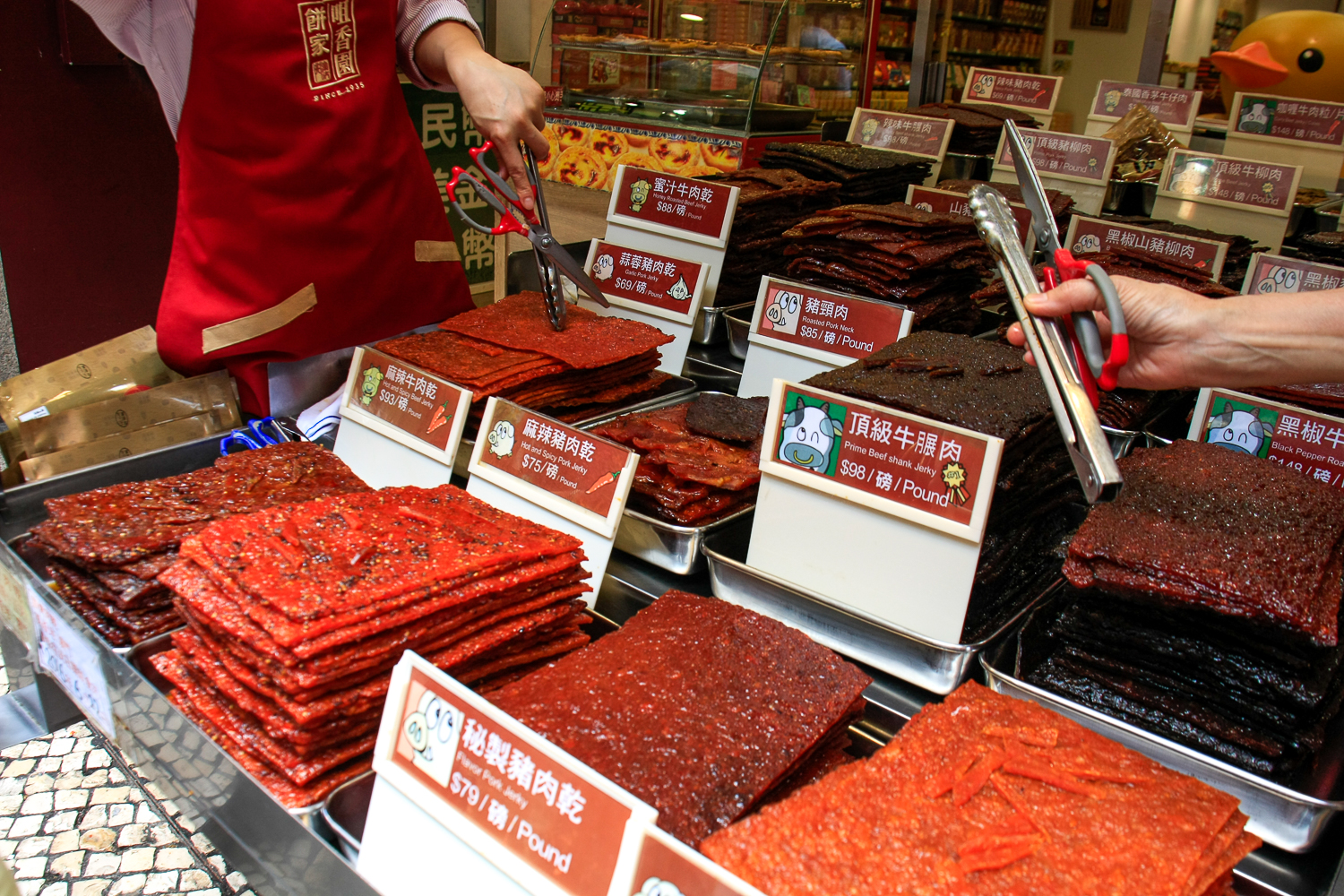 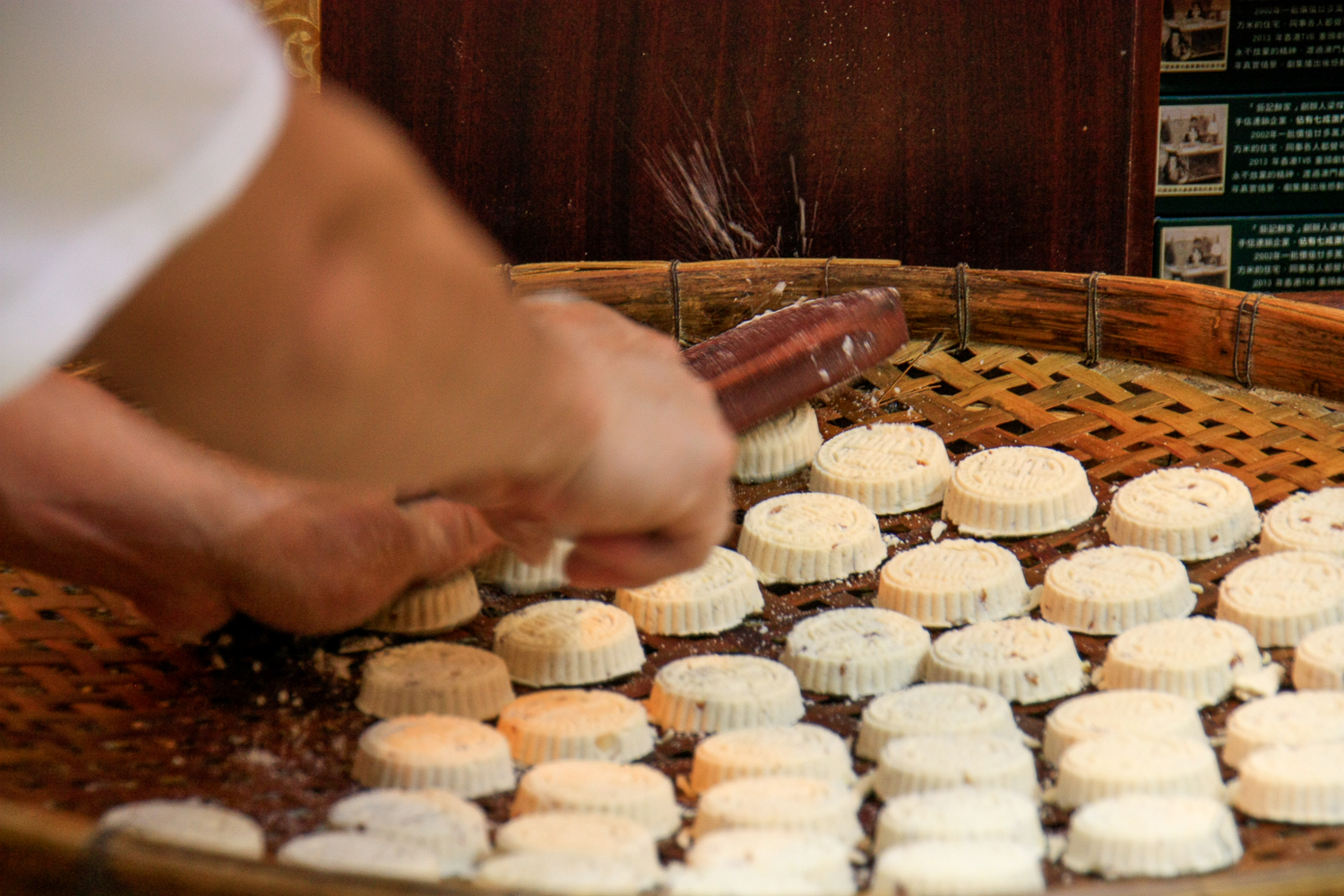 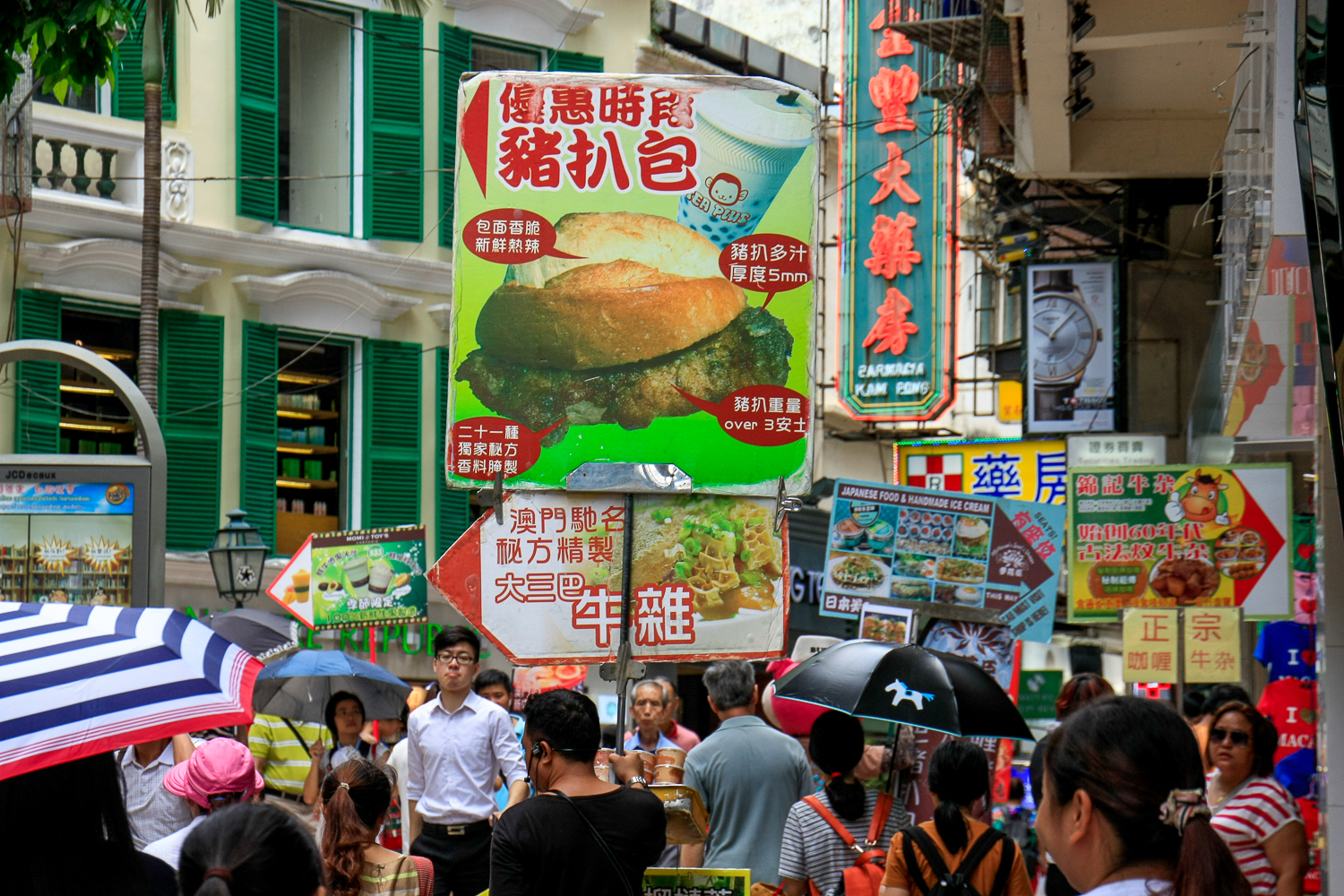 I could’ve spent many more days just eating in Macau and being mesmerised by the blending of two disparate cultures. (We were not able to squeeze in many of the sights on the main peninsula, after our worthwhile but long detour to Coloane.) But then again, we were staying in a glitzy hotel that offered us free tickets to an afternoon “Broadway” show with only foreign performers who were talented but showcasing nothing in particular. Macau’s casinos have now dominated its culture, being the one place in China where the government allowed expansion of gambling, and it’s attracted plenty of extremely rich mainland tourists along with their stacks of money. 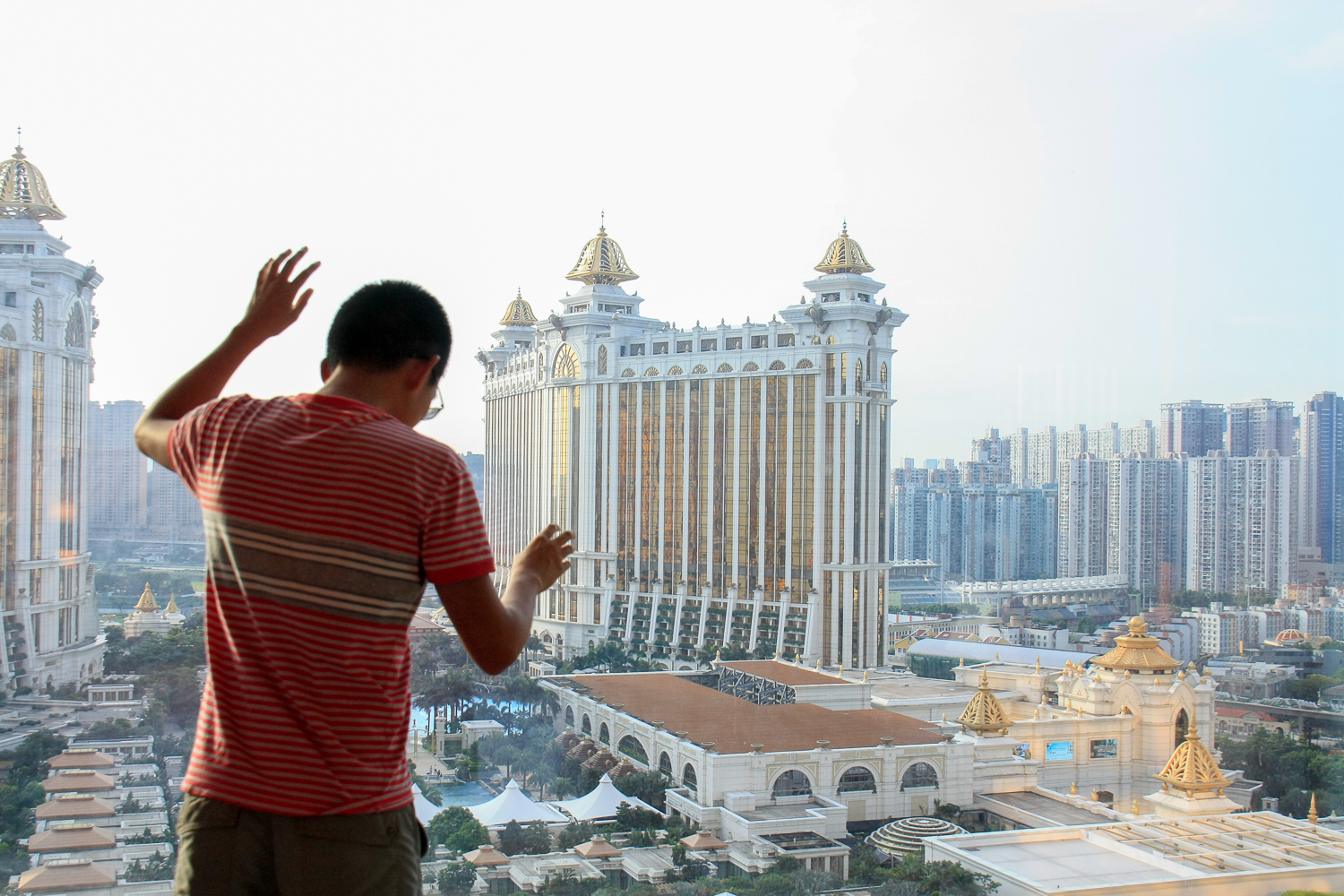 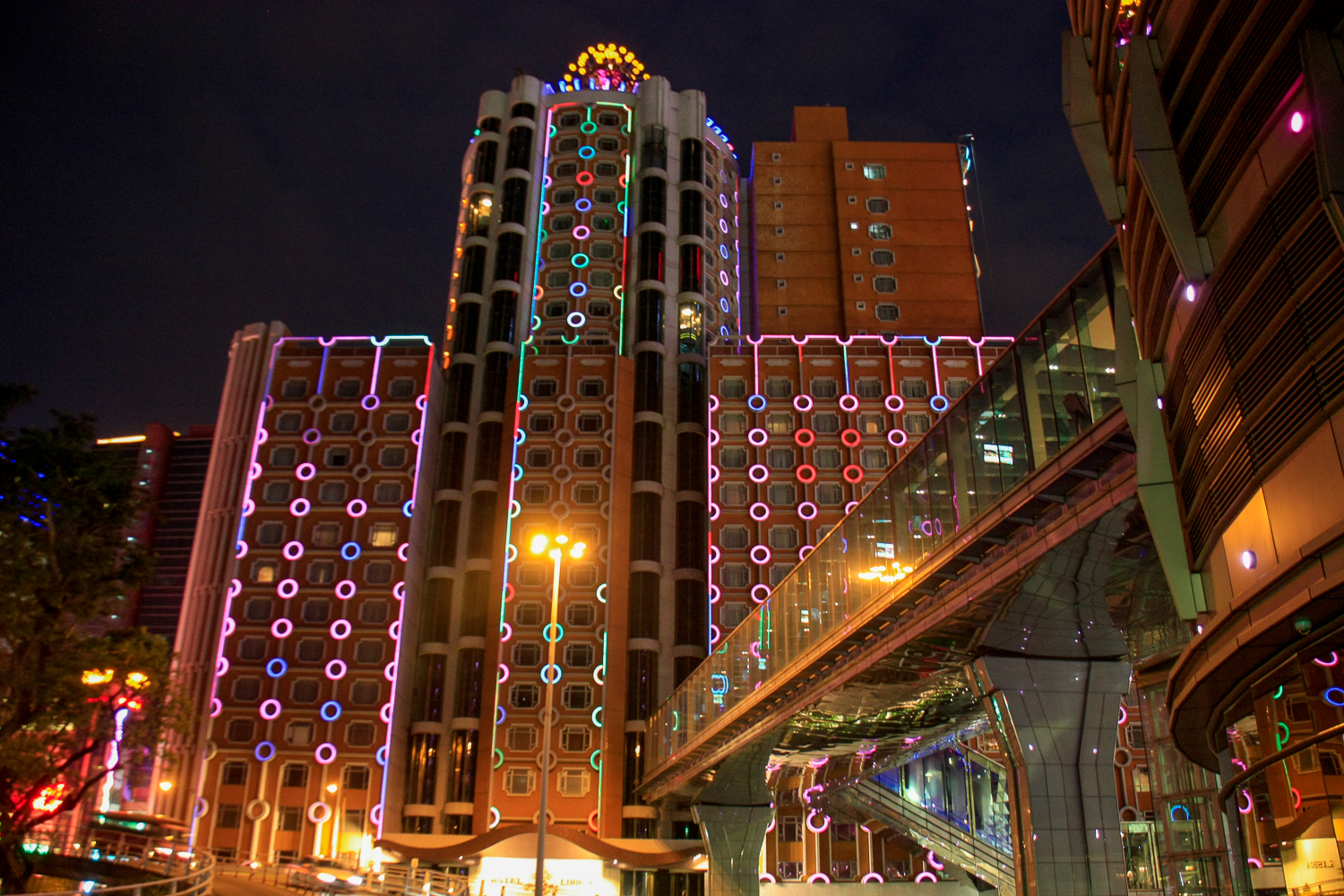 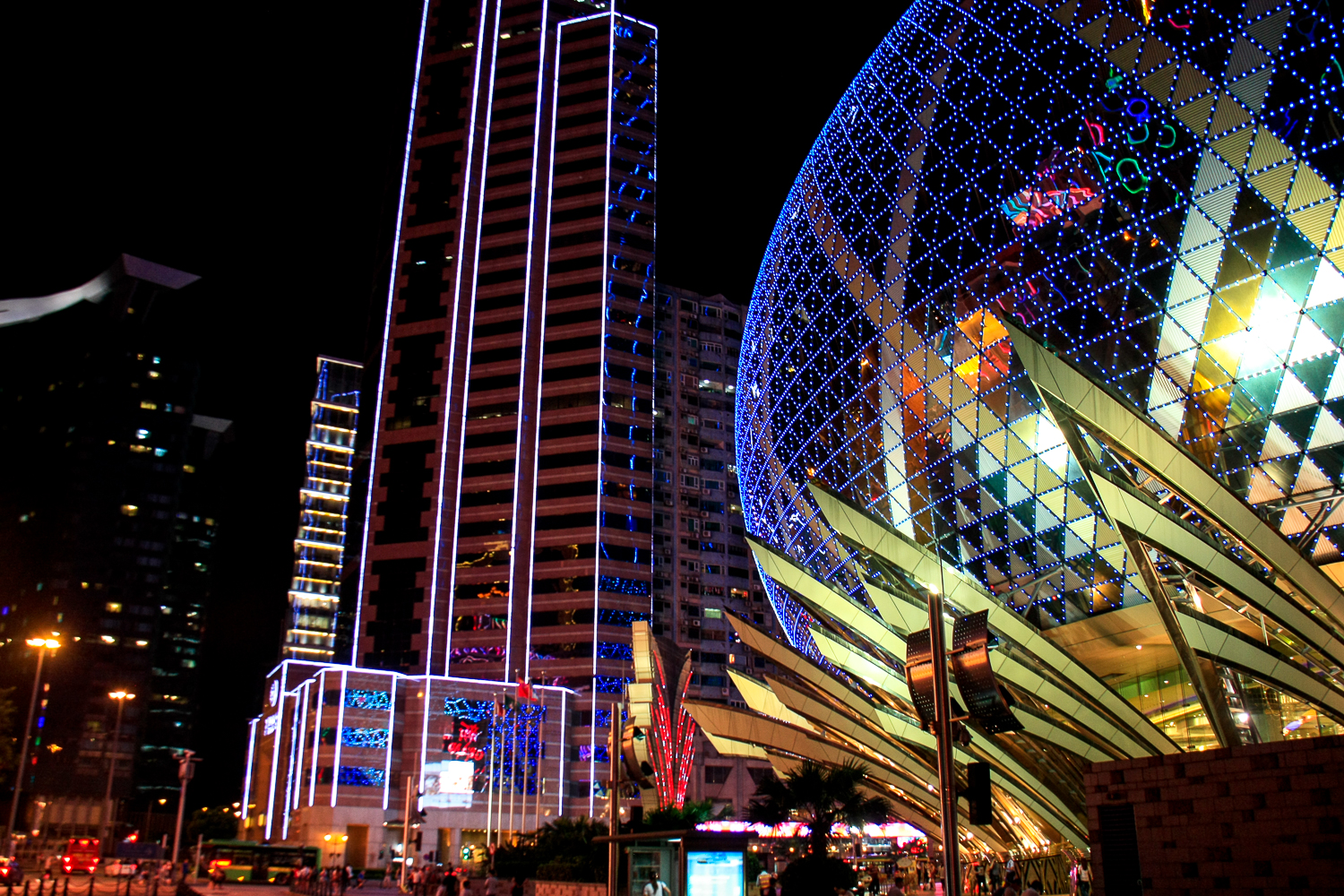 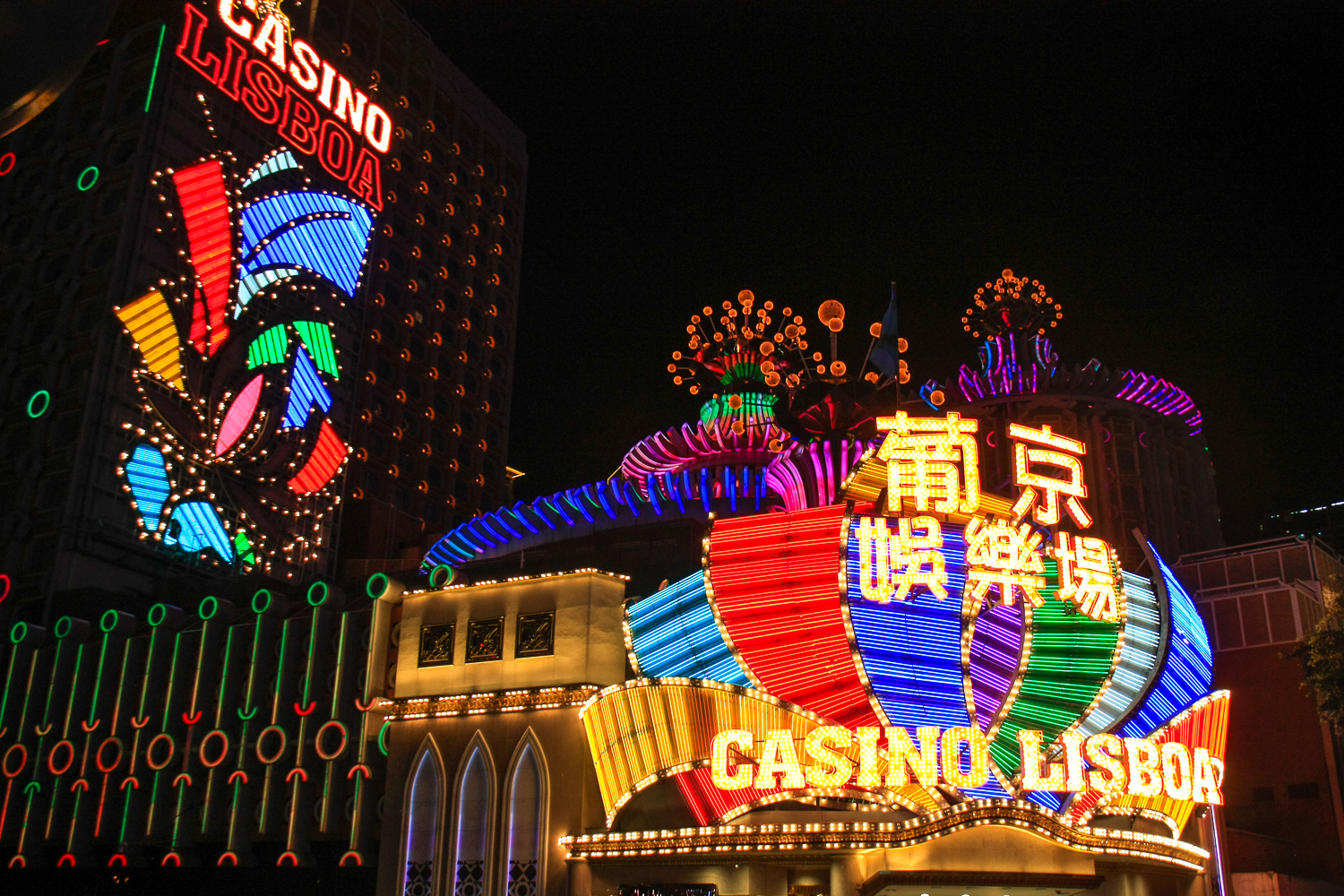 As pretty as all the lights are, and the malls pretending to be Venice or New York or wherever, it’s still a culture of imitation that’s extravagant yet pretty dull. It’s the type of tourism that Macau seems to want — even one of our taxi drivers seemed confused when we said we wanted to go to Coloane.  (“Really?  There’s nothing there.”)  But if this needs to exist for Macau to be able to preserve its own incredibly unique past, then so be it — I just hope those visitors are willing to step outside and see it!