As a family, we took a four day trip to Guilin to enjoy its famed scenery, with the help of a driver/guide. Pouring rain every day made the trip rather difficult — despite being rainy season, it’s also China’s peak travel season due to summer vacation — but we were able to make the most of it.

Guilin and its surrounds (including Yangshuo 陽/阳朔 and Xingping 興/兴平, which we also stopped by) are most famous for the karst mountains, and indeed, the city is surrounded by them: they jut straight out of the ground, curve in impossible fashion, and even form natural arches. It’s no wonder they’re so revered that they’re consistently the inspiration to a lot of Chinese art, the style my mom most enjoys painting. And with the consistent rain, what we saw was the misty, mysterious atmosphere that the semi-obscure peaks and Li River lends, one we never would have seen had it been sun and blue skies the whole time.

Being a guided tour meant that we were shuttled around to some of the more… kitschy touristic points, generally catering to the mainland Chinese tourist: pay admission! Look at this imitation of a thing! Pet this poor thousand-year-old turtle! Make sure to touch this thing for good luck! Dress up and stand in front of a scenic looking background and pay for a picture! Look at these people from an ethnic minority putting on a song-and-dance show for you! Here’s a cave with all these crazy lights inside! Oh, you liked that one? Here’s another one! And another! And once you’re done, visit our unavoidable shop that twists and turns leading to the exit! People eat this stuff up. 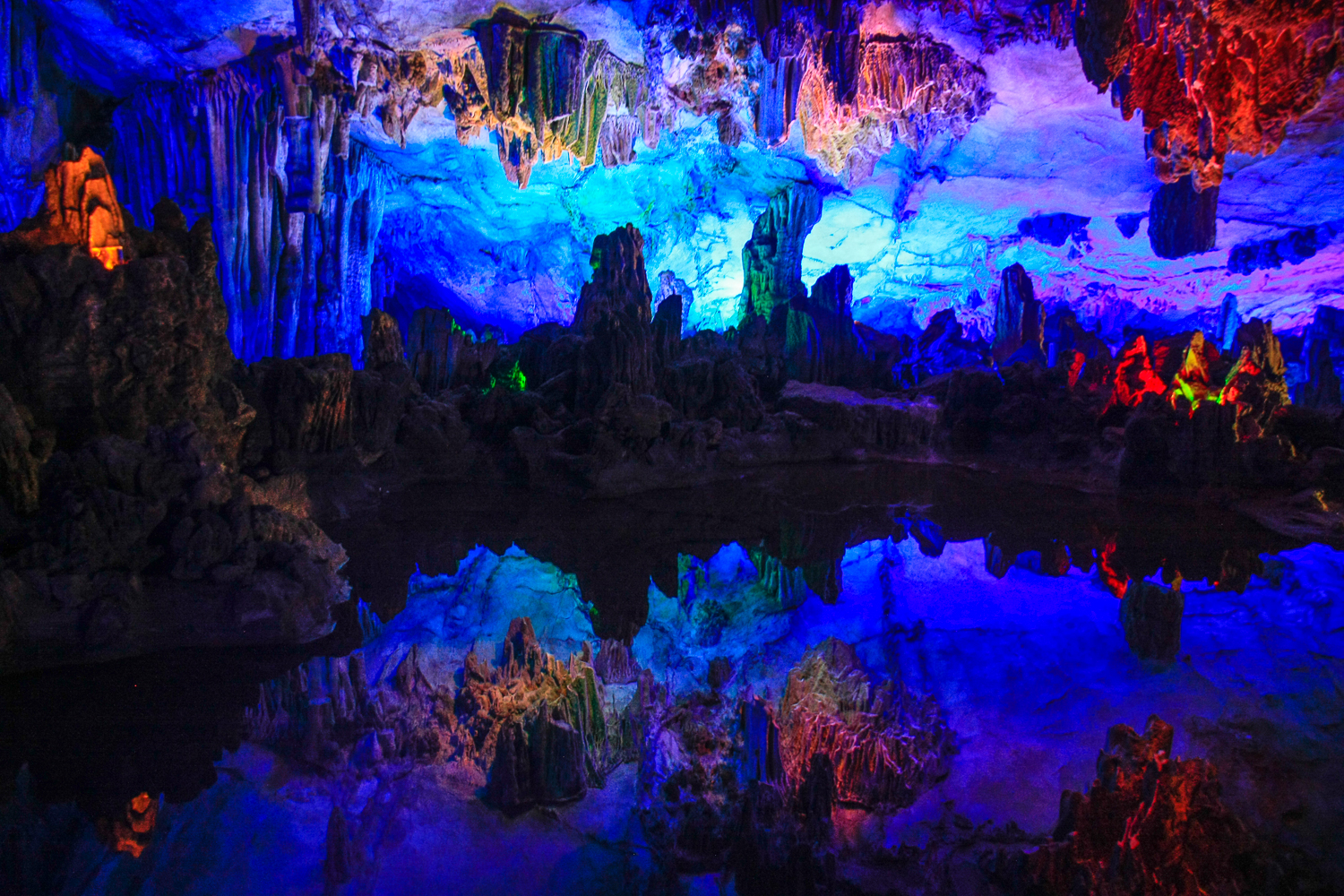 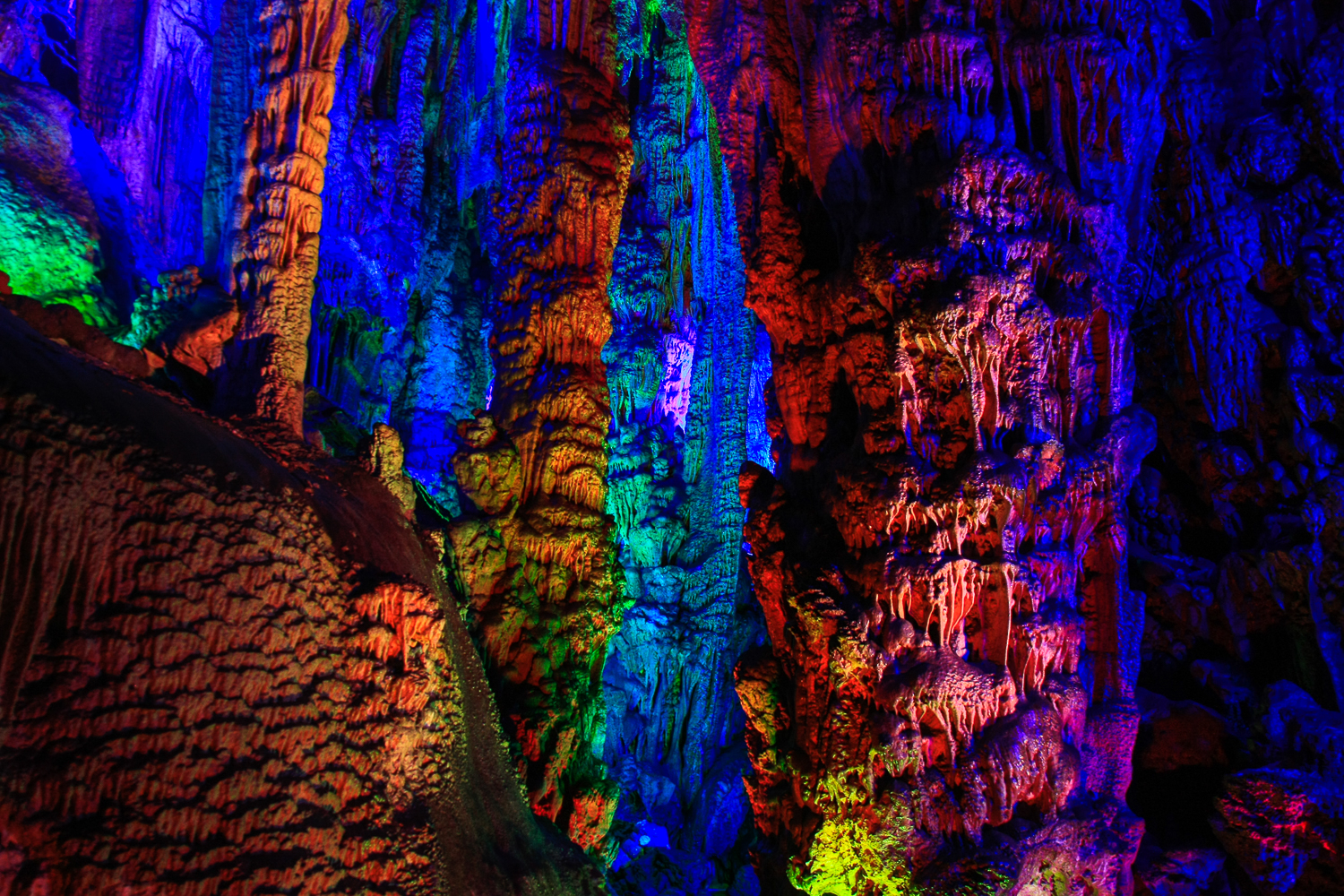 And unfortunately, many of the mainlander crowds we faced were often not well-behaved, being loud in peaceful places, smoking and littering directly in delicate natural environments, and more interested in selfies than the scenery, or being pushy for photos than learning about culture through performances. Not to say that everyone’s like this (and indeed, the vast majority of people were very nice), but it seems that mass tourism attracts a certain type of clientele. There’s a bit of a disconnect — the Chinese culture which visitors are seeing and told to be so proud of is so refined and restrained, yet the visitors are acting like anything but products of that same culture. Well, this is what happens when you follow the crowd.

But among the questionable “highlights” and distracting behaviour were some serious gems and interesting things to learn. For one thing, Guilin’s got great food — though you could arguably say that for any region in China. Its famous rice noodles — rice being grown all over Guangxi province — are best served with a shallow, sparing amount of strongly flavoured soup. Guilin’s city centre features a large pedestrianised area that comes straight alive at night, with these noodles, Guilin’s famous, melt-in-your-mouth, and supremely fragrant guihua 桂花 (osmanthus) biscuits, roasted lamb skewers, drunken fish 啤酒魚 (cooked in beer), oysters, hotpot, and all manner of other things on sale. And given that all of us got a little sick from changing weather, it was all too convenient for my family that luohanguo 羅漢/罗汉果 (monkfruit), a sweet fruit treasured for its healthy properties in clearing “heat” — the traditional Chinese medicine concept where foods have “heating” or “cooling” properties that have nothing to do with temperature, and everything to do with your health where you can’t have too much of one or the other, and where things like sore throats are caused by an excess of “heat” — was readily and cheaply available, Guilin being one of the few places the luohanguo is native to. 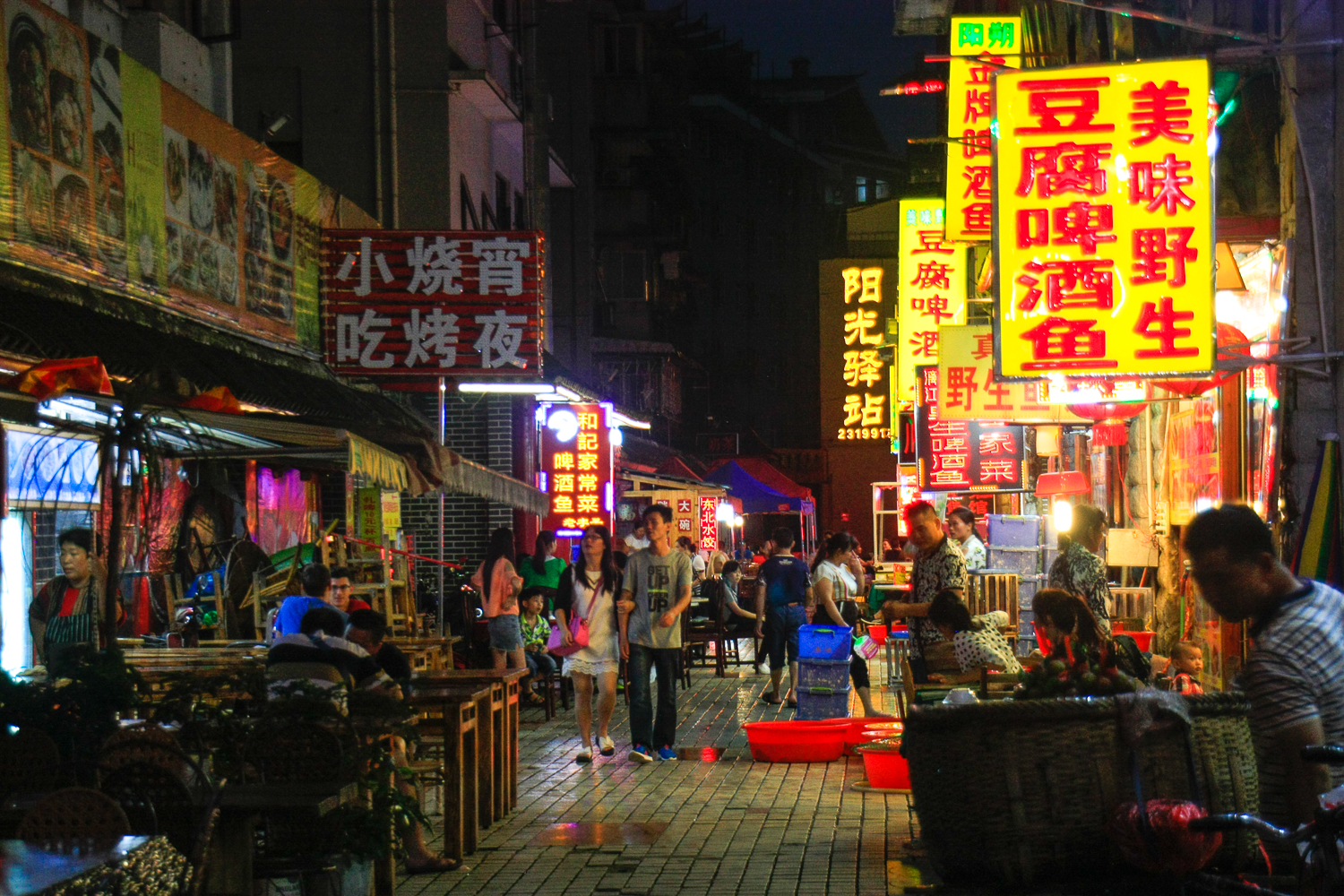 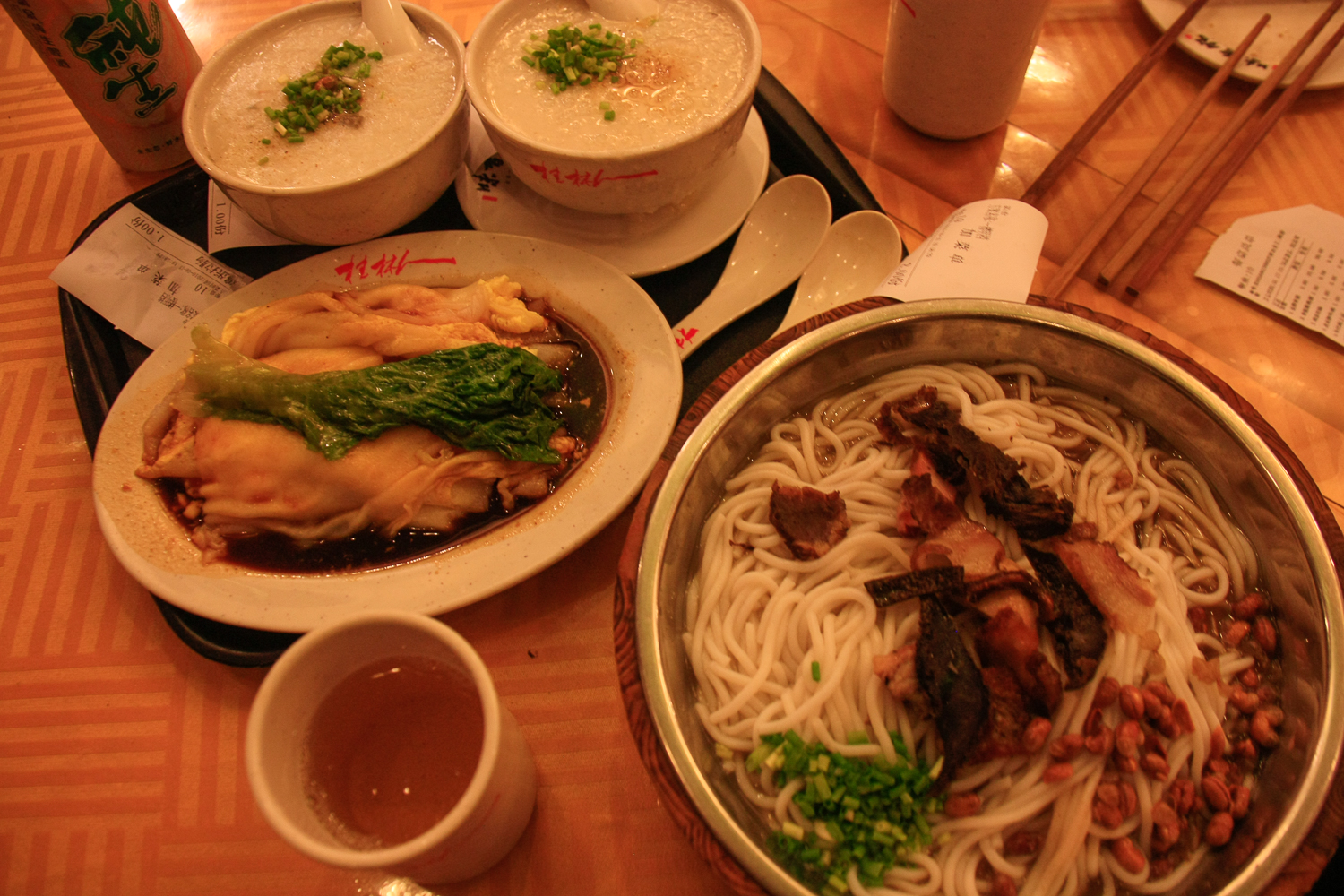 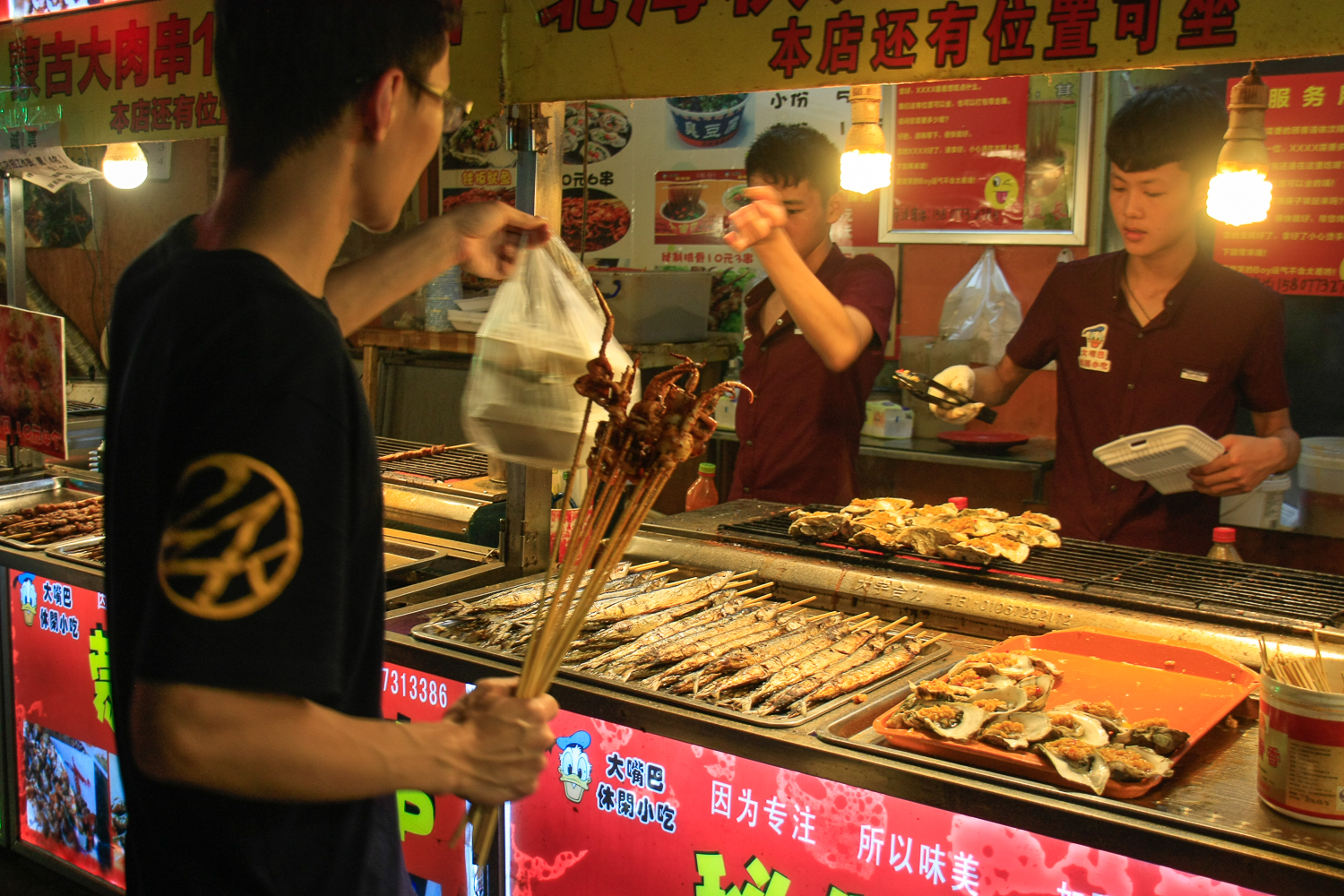 We didn’t spend too much time in the city of Guilin itself, but we were able to appreciate its beauty primarily along the Li River 漓江: from the Sun and Moon Pagodas and the various bridges nearby lighting up at night, to the riverboat ride we had where we passed under more elaborate bridges, locals walking along the river, fishermen setting up for the day, and of course, the magnificent backdrop of sudden peaks — rather unphotographable in grey fog, but with an undeniable atmosphere. 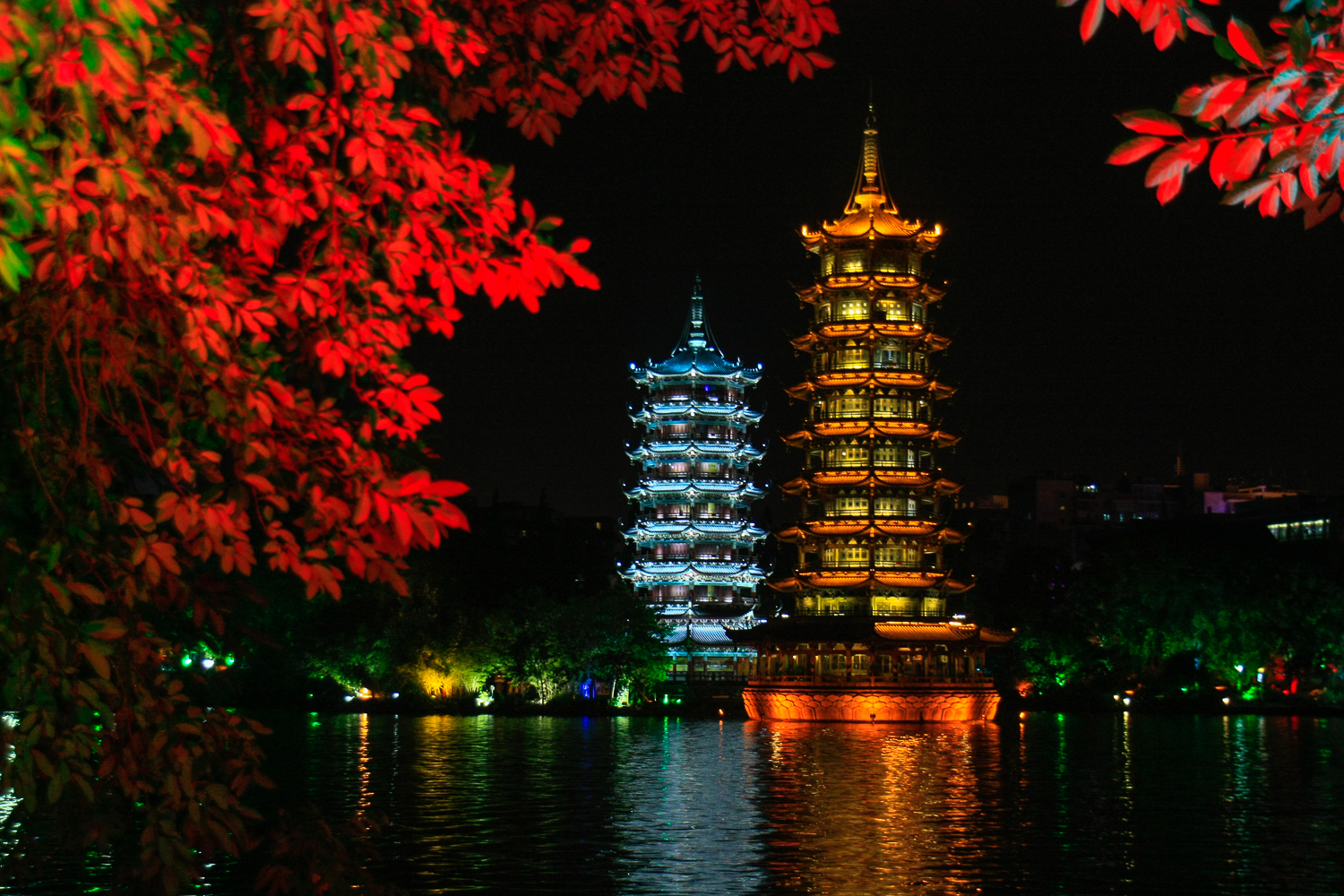 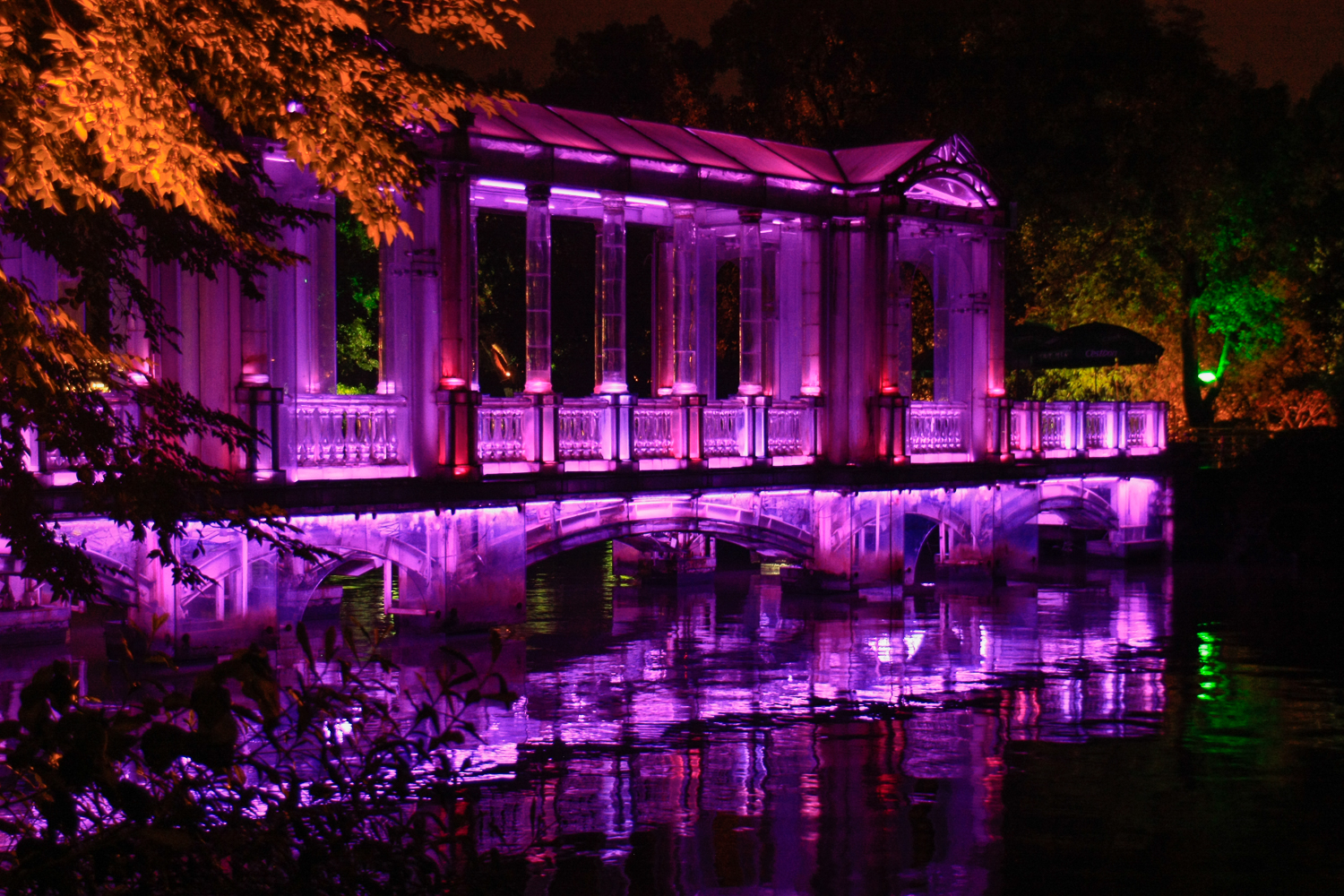 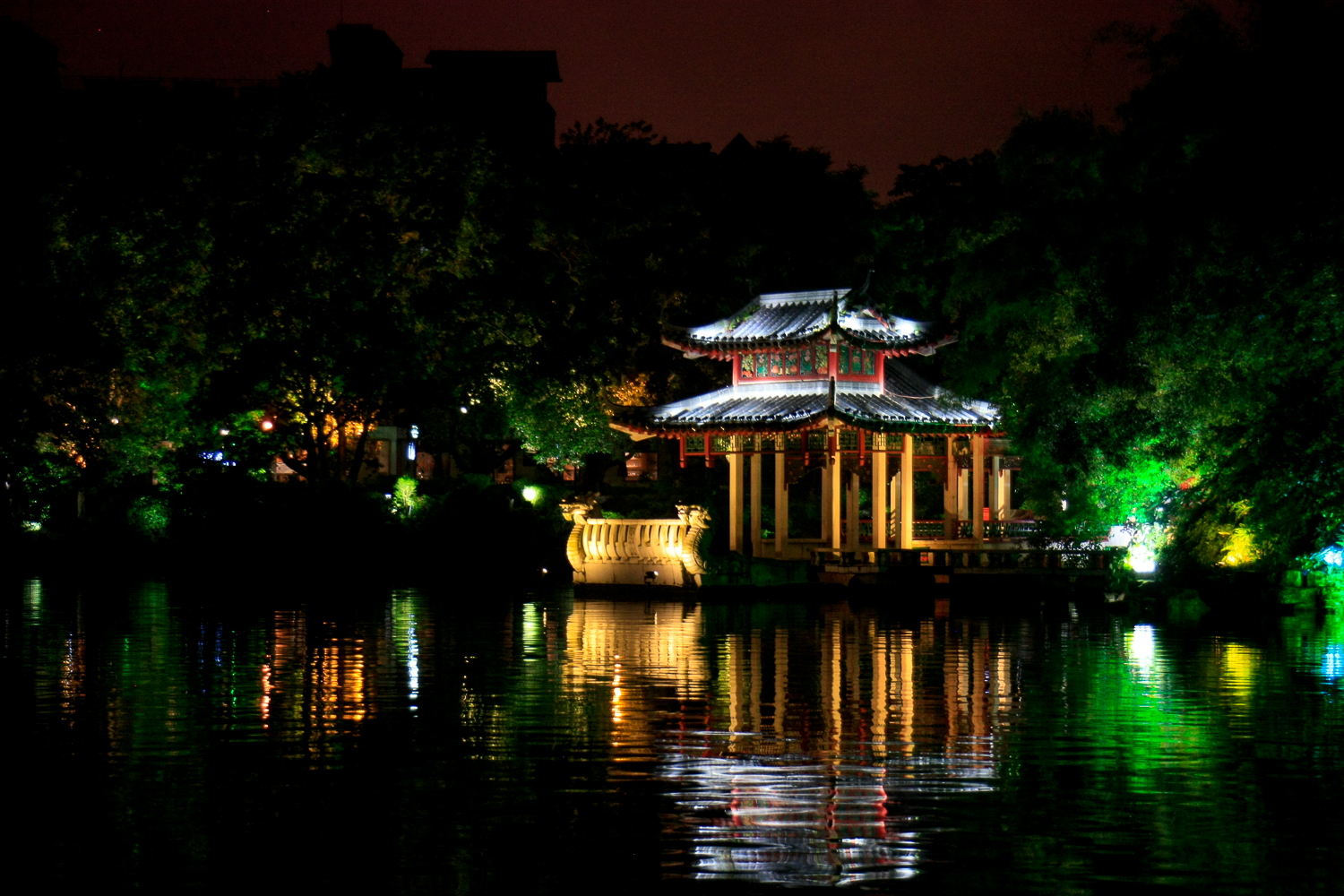 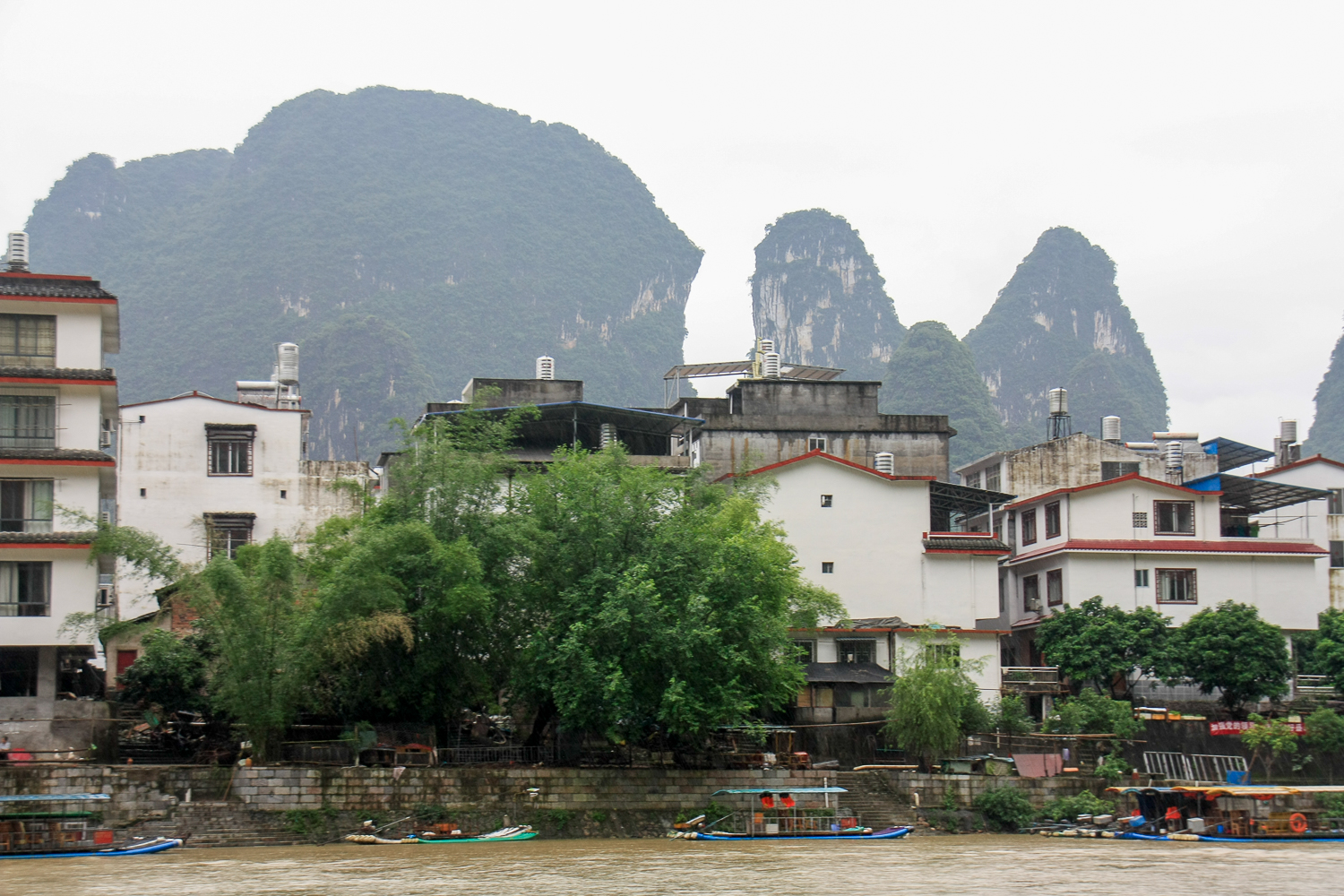 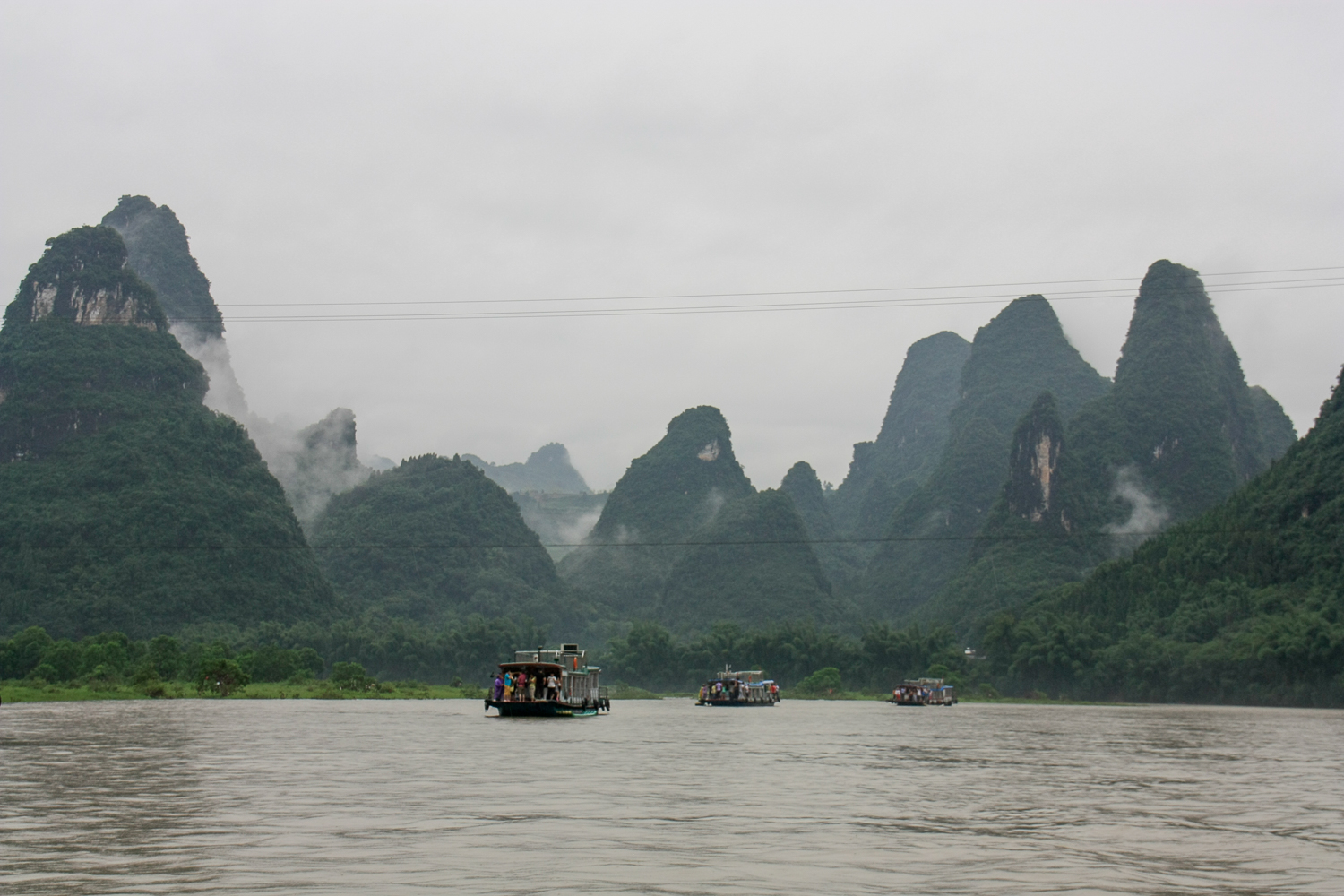 Guangxi province 廣/广西 is indeed home to many minority groups, all of which developed their own elaborate cultures and civilisations. (For reference, the majority ethnic group in China is Han 漢/汉, which I am a part of.) While the way the Chinese government tends to have them exhibit their mass-tourism potential is a little heavy-handed (I mean, who seriously believes they dress in fancy traditional costume all the time and sing and dance five times a day?), there’s no denying that the exaggerations are based on reality. 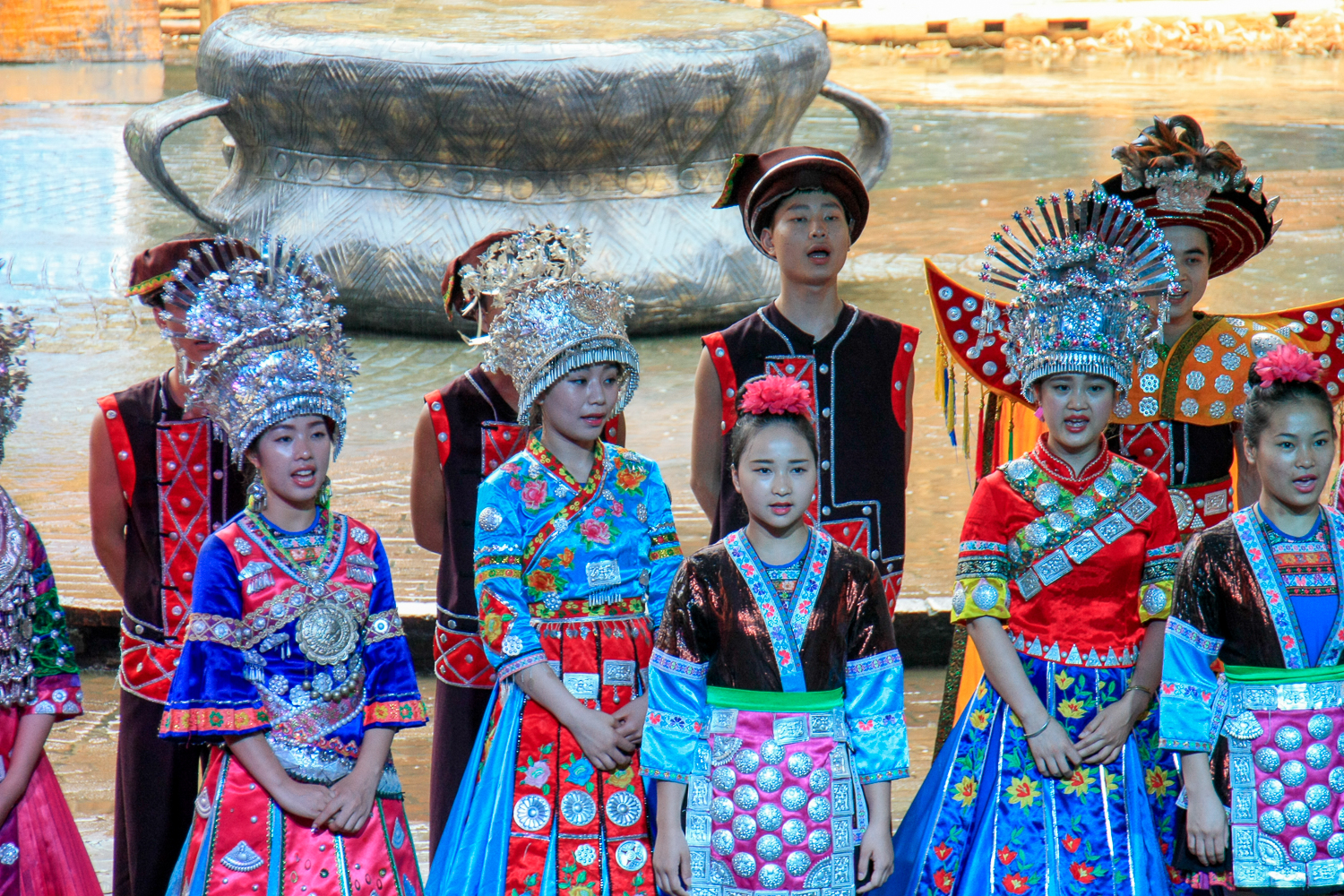 The Zhuang 壯 minority people are matrilineal, where men work for women’s hands in marriage with a three-year trial period (since they don’t allow divorce) where the man toils for her. If the trial marriage doesn’t work out, he’s given a simple meal for his three years of hard work and sent off! The women aren’t just waited on hand and foot either — the roles reverse once the marriage is finalised, and the women are the one who do the manual labour while men… drink?… Something like that. They’re so strong that they’ll go out to work again the day after childbirth! The Zhuang women credit their silver jewellery for their health and strength, and general lack of sickness — they claim that silver removes toxins from the body. (Of course, for the Zhuang tourist village we visited, that segued immediately into us being brought into a shop selling silver.) 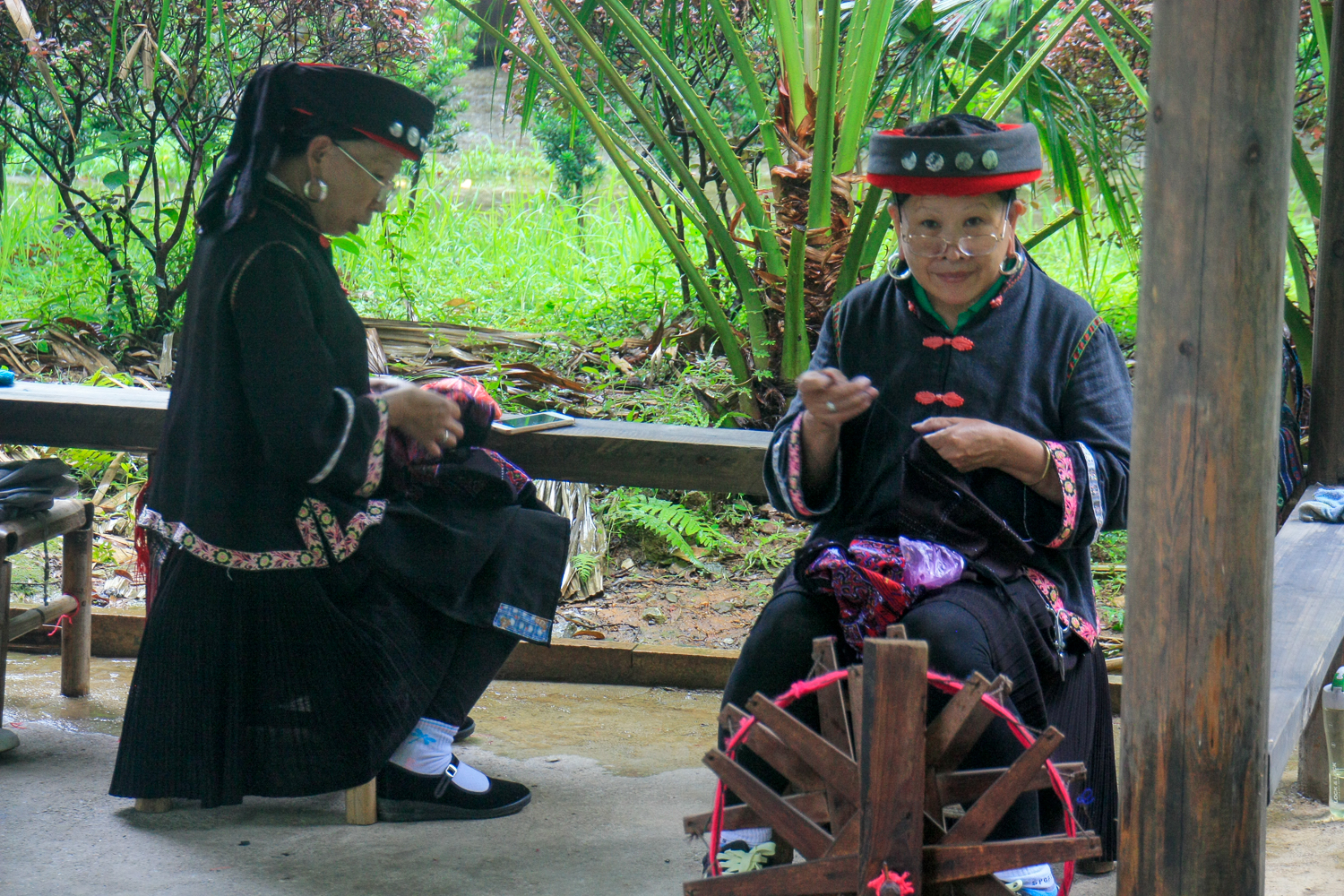 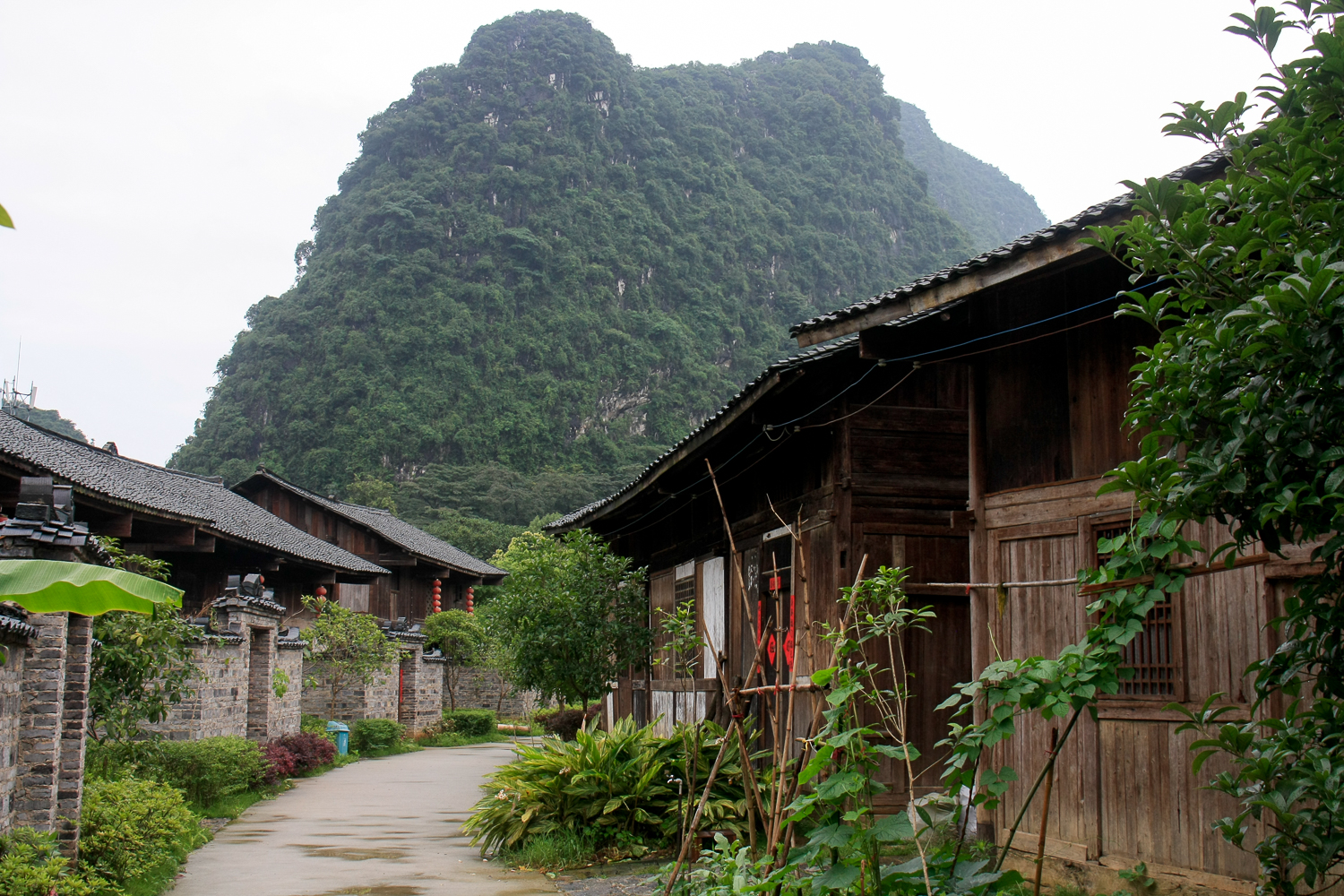 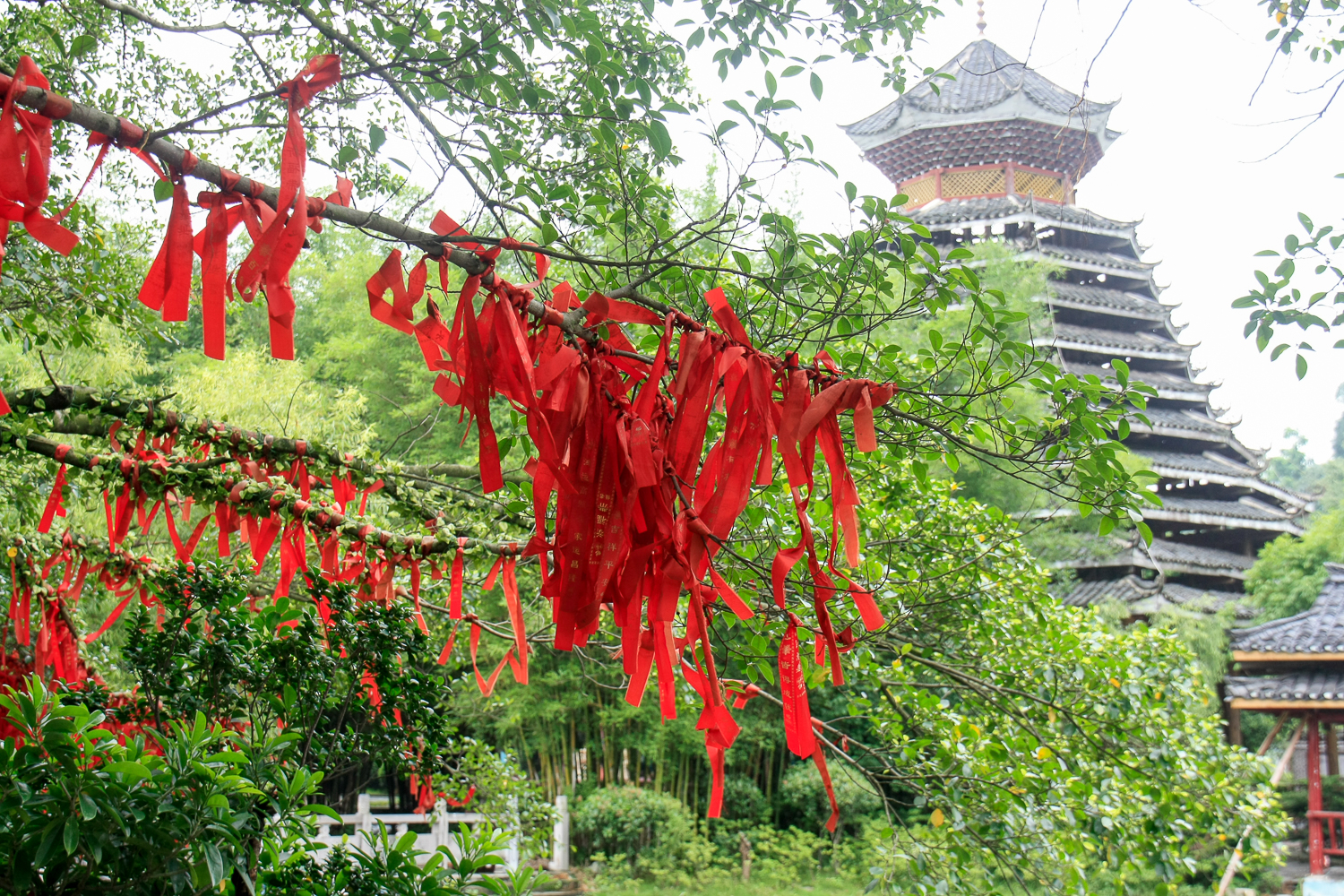 The Yao 瑤 minority village we visited, Huangluo 黄洛, felt far more lived-in, with its location on the tourist circuit more happenstance than recent creation. Its beauty lay in its imperfection — paths to farmers’ fields, farm animals running around, rickety leaning multistory buildings of antiquated architecture, a random school basketball court plopped on the side, next to a cable-stayed bridge. We learned nothing of the men, but the Yao women are best known for growing their hair extremely long: from birth until 18 years of age, where the hair is cut and allowed to grow again. Their extremely long (often 2+ metres!) hair is tied together with their old 18-year-old hair to form elaborate headpieces, and wandering around the village, women here and there indeed had their hair tied up in various different traditional styles, depicting their marriage status: “crown” for single, and “turban” for married — well, at least that’s what I call it. 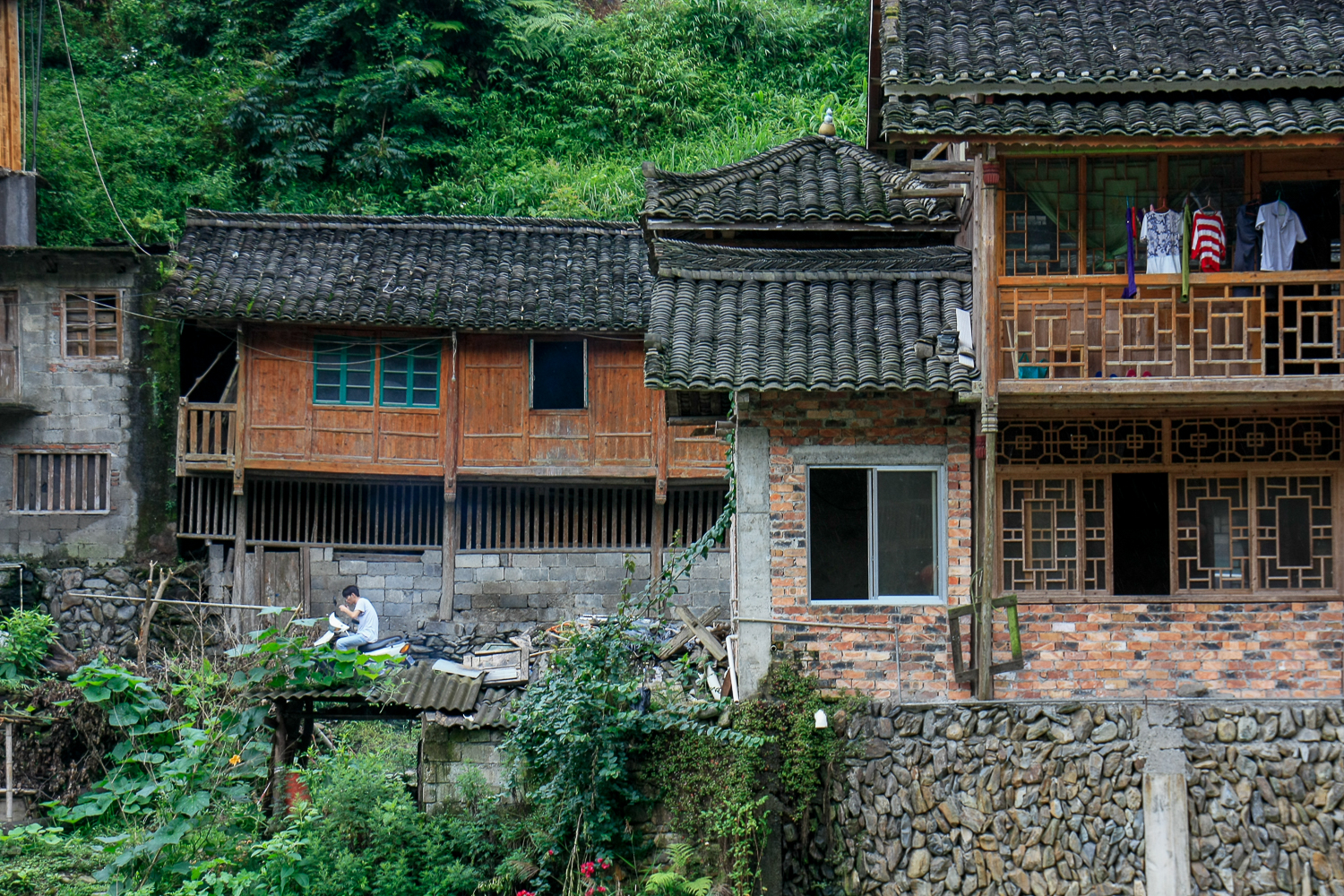 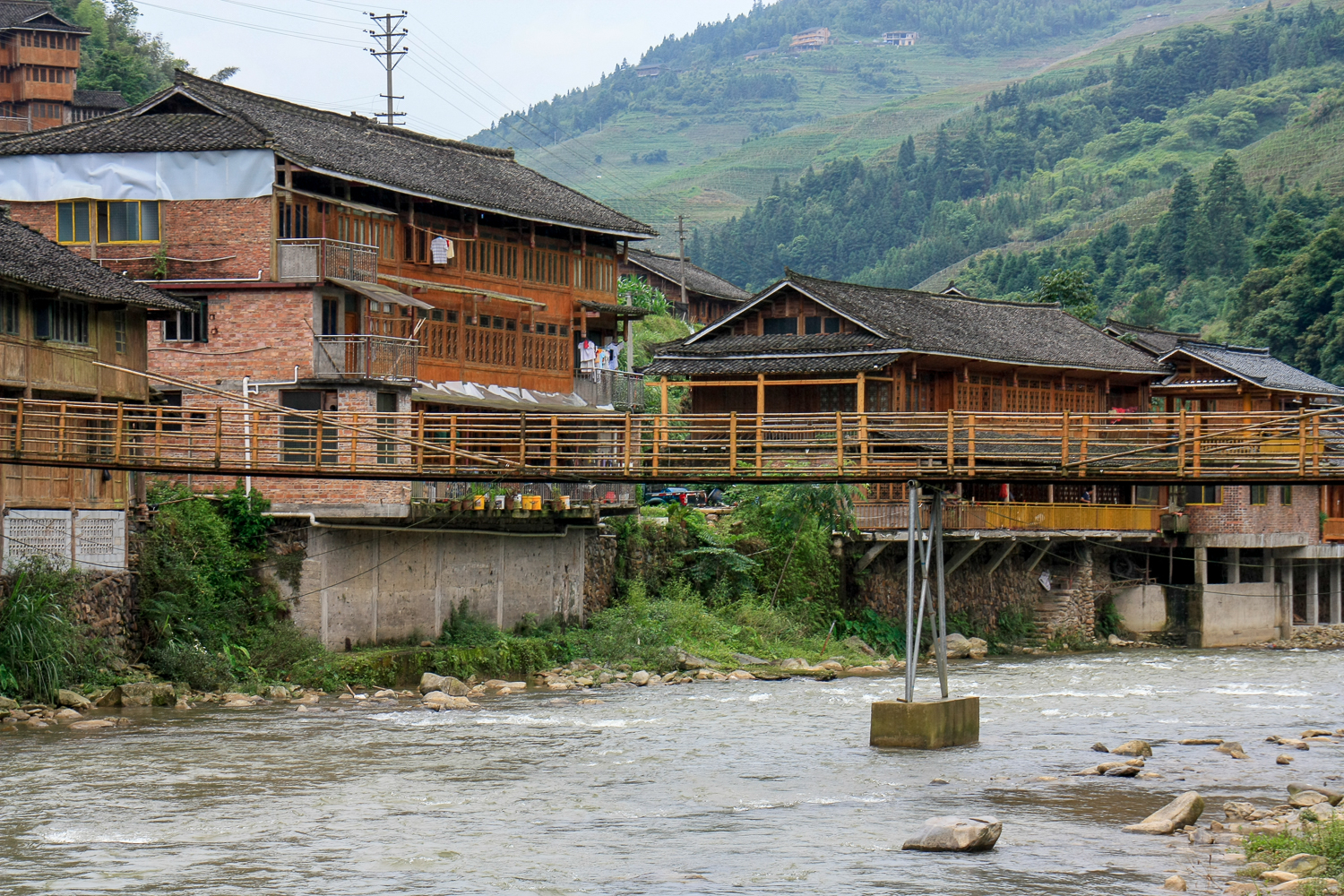 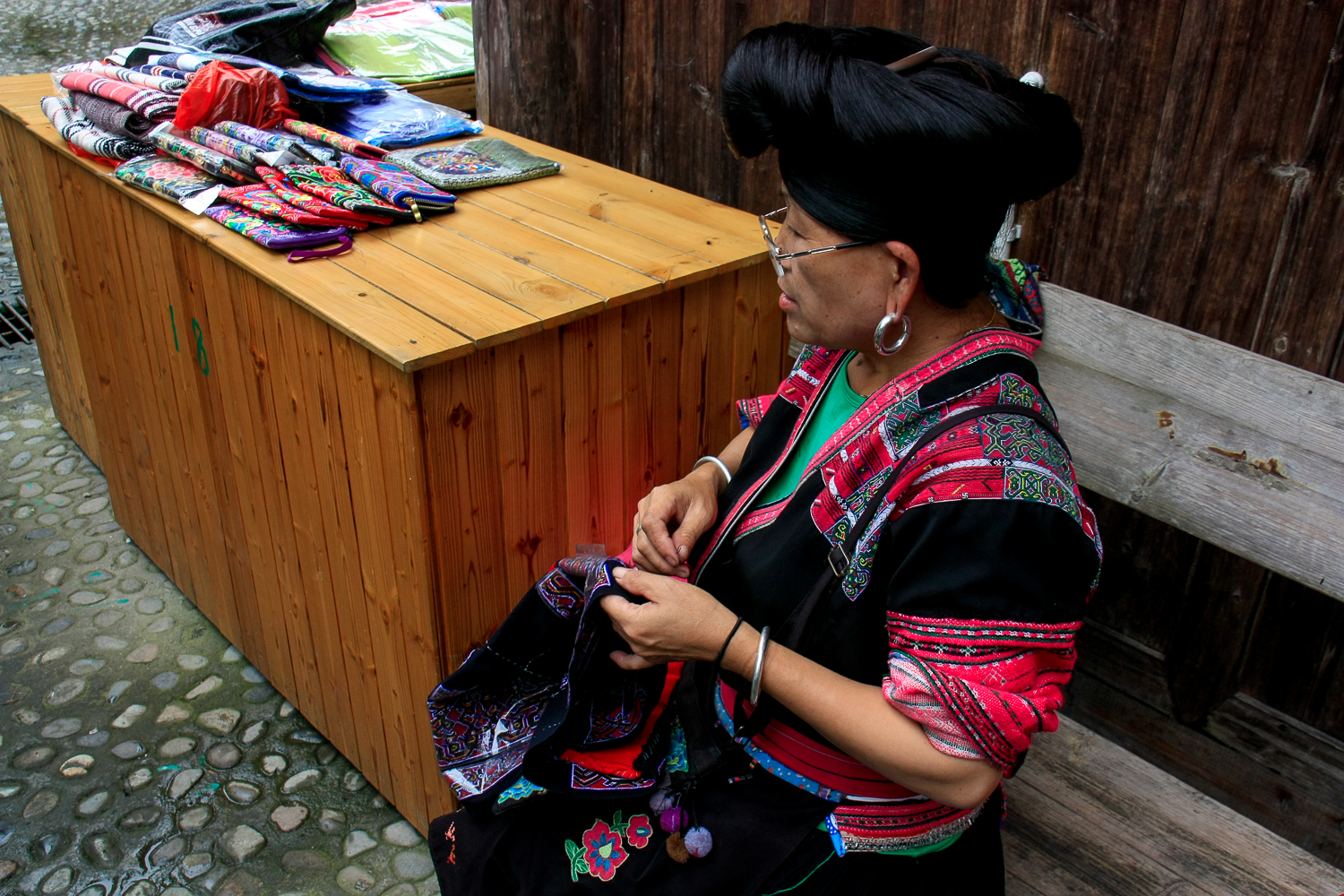 They put on a song-and-dance show too, one that felt quite loose but presented their customs well: the annual clothes-drying festival, awash with the colours of their clothes; the marriage ceremony, where they plucked two men from the audience and did a demonstration which actually involved the poor volunteers getting their butts constantly pinched in a traditional wedding game; hair washing, which is done with rice water (their secret to black hair: even seniors in the village don’t have a single white hair) but takes hours due to the length of their hair, and is done maybe twice a week; and hair tying. 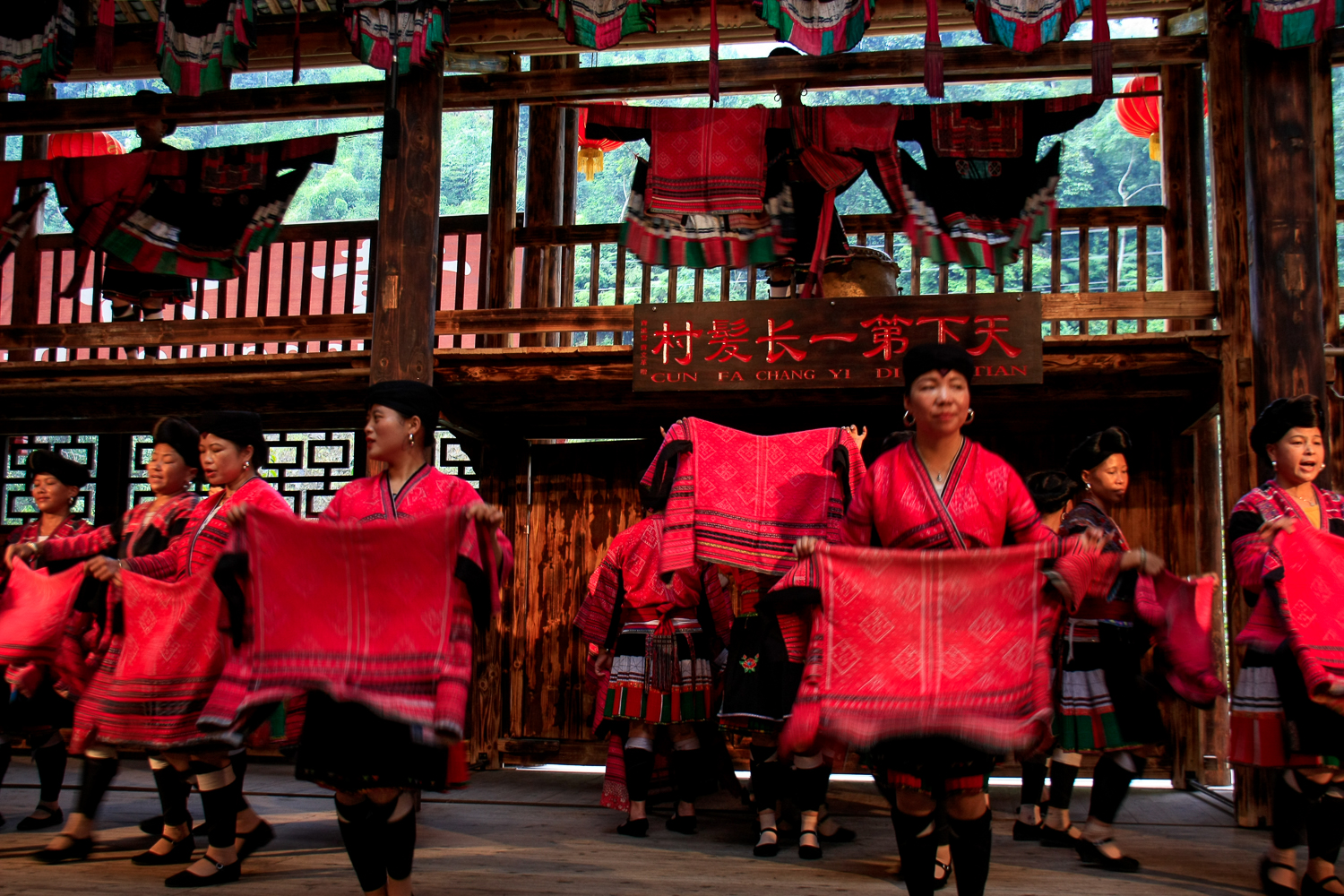 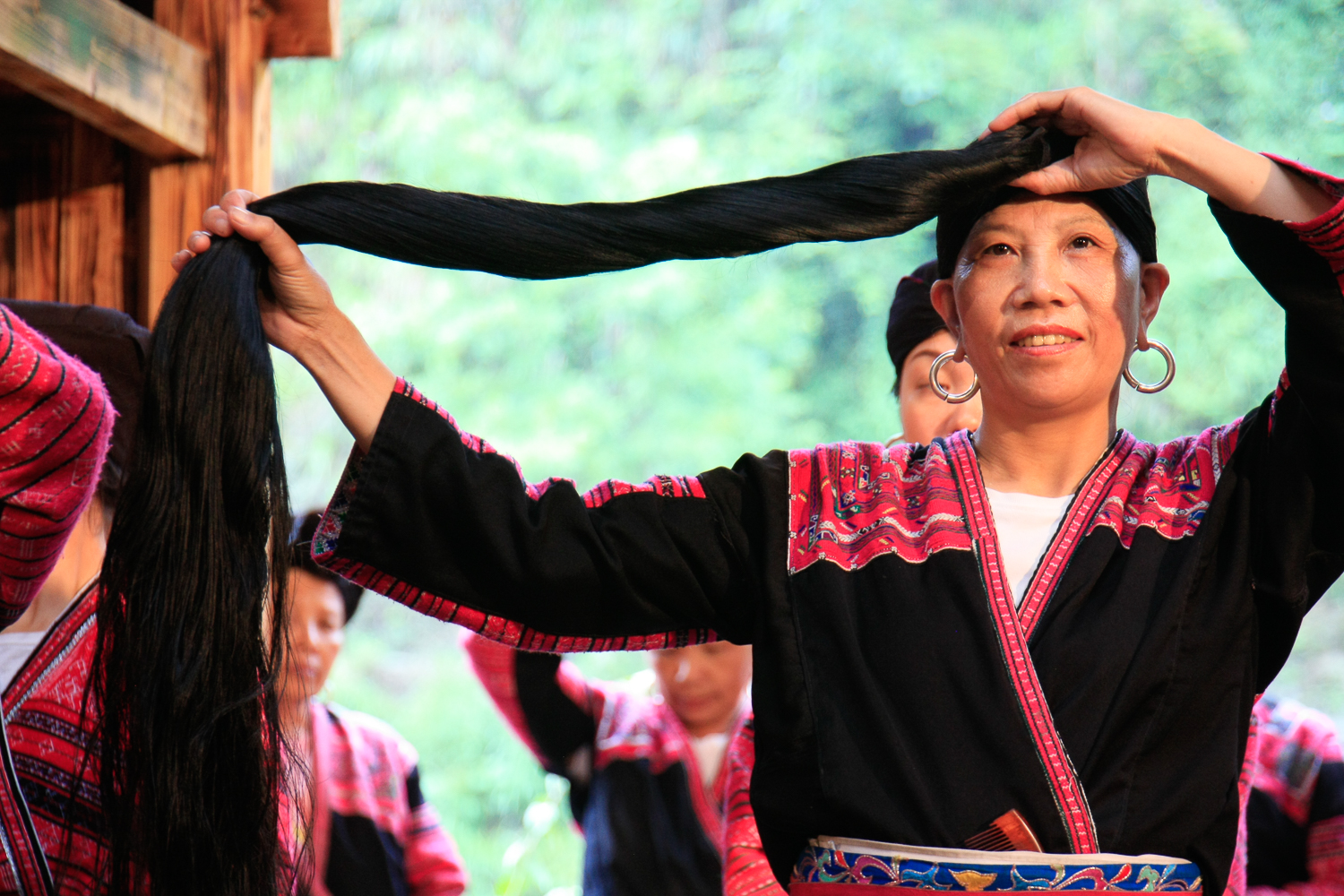 Away from the rest of the tourists who left after the performance, we chose to stay behind and have lunch, and were rewarded with a friendly and wonderful riverside meal of fish (which we later found out was caught in the cover of night since they’re not actually allowed to fish in the river), tofu, eggs, sticky rice, local tea, and rice wine, all of which was presented simply yet astonishingly delicious: their food is all local, their water is fresh and pure from the mountains, their rice naturally lightly sweet, and unlike in a lot of Chinese horror stories, there’s no weird chemicals in their food. Even a simple steamed Chinese vegetable dish, something I generally deride as bland and chewy and tend to avoid, was packed with flavour and had me hanging for seconds. In essence, this was simply a meal that can’t be replicated in another locale.

In between visiting all of these were some very long car rides, but with such scenery, we couldn’t help but constantly ask our driver to stop (on the highway) for us to snap a few pictures: a picturesque old village here, a few shrouded peaks there. There’s a famous saying, “桂林山水甲天下”: Guilin’s scenery (rendered in Chinese as literally “mountains and water”) is the best under heaven. Kiiiinda hard to disagree. 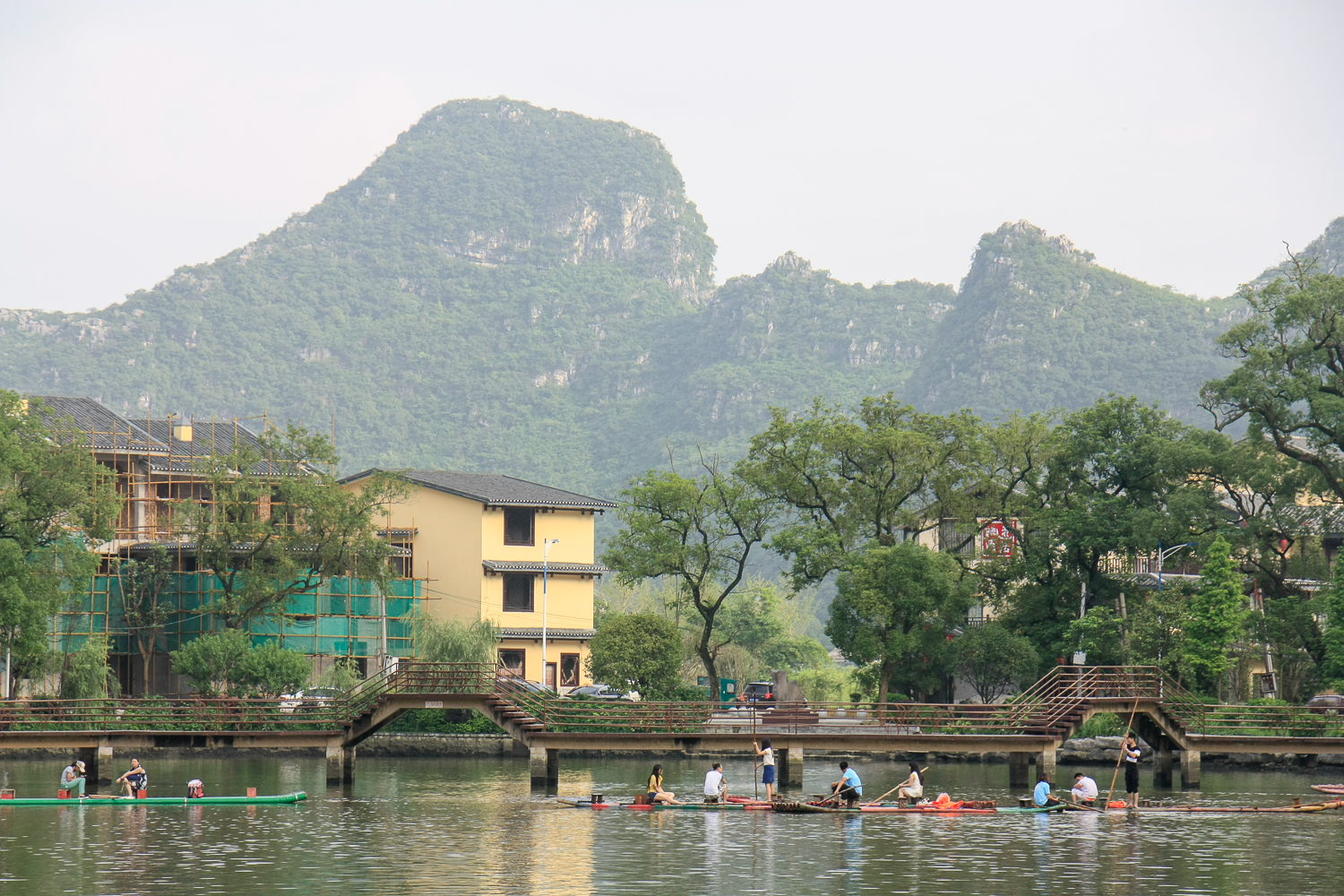 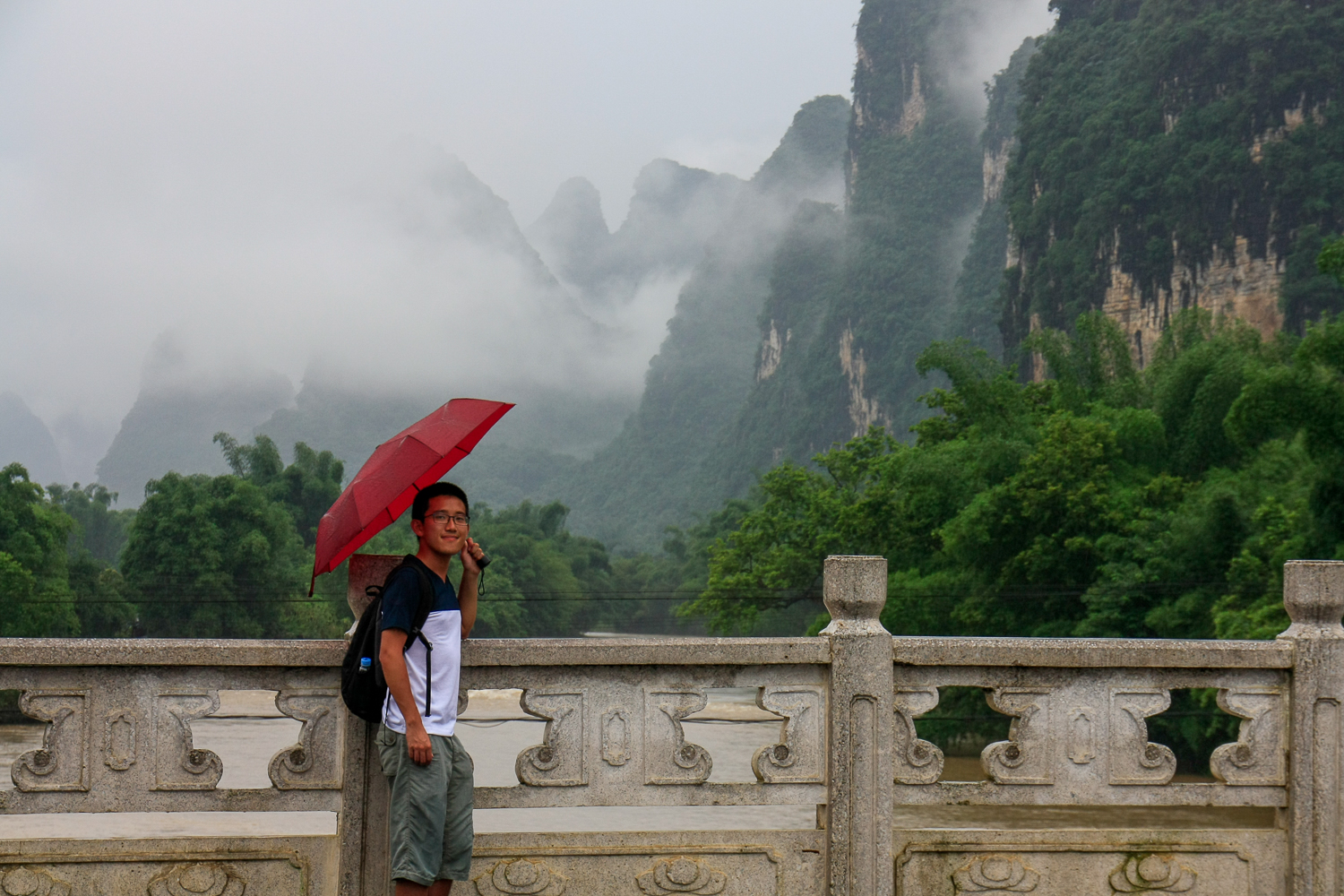 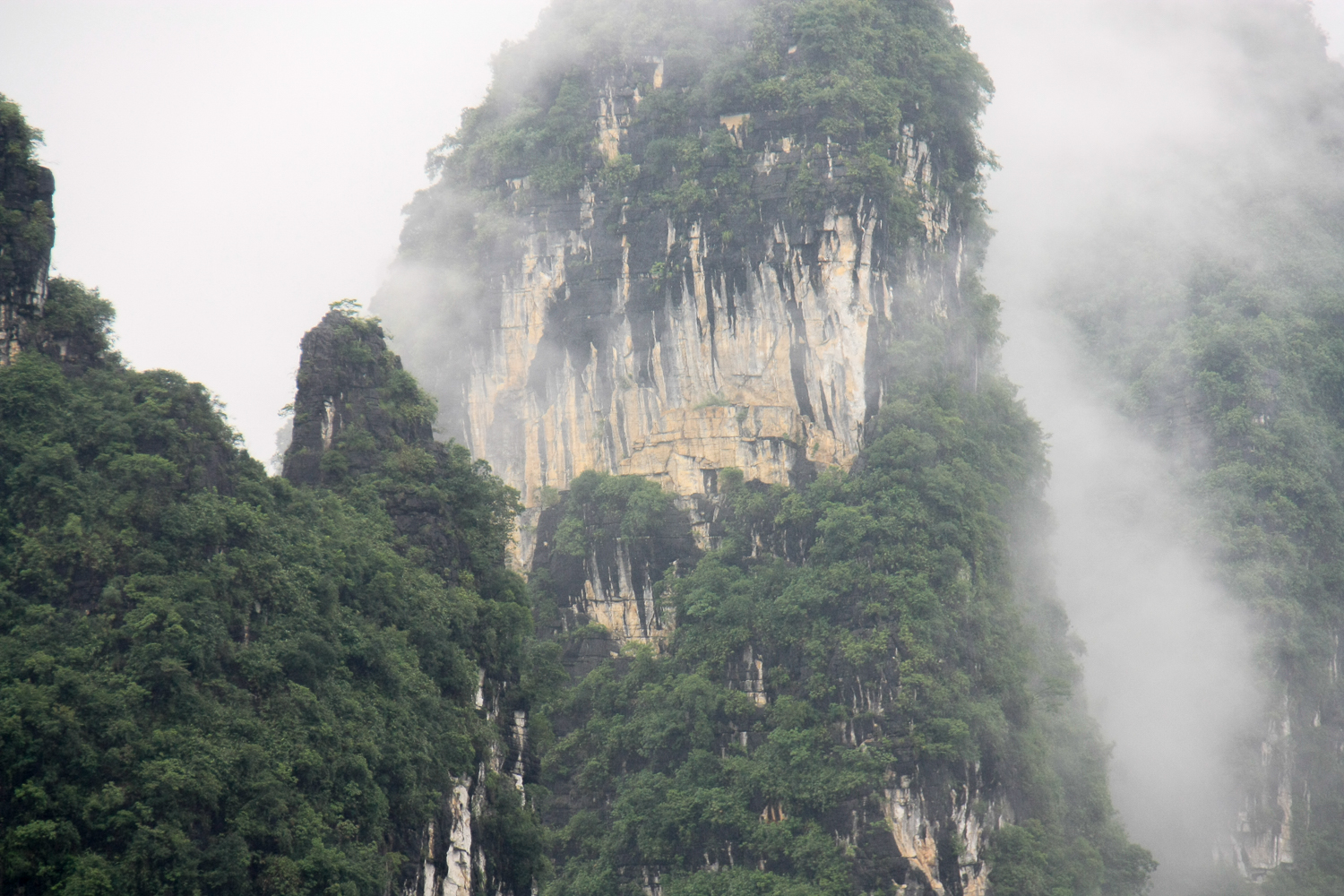 Our trip was capped off with a visit to the Longji (Dragon’s Backbone) Rice Terraces 龍/龙脊梯田, an entire mountainside of rice terraces dotted with Yao villages that was only “discovered” by the outside world in 1990. Our eyes were glued to the windows on the cable car ride, and the view from the top simply can’t be described in words. We count ourselves lucky to have come in a time with few visitors, just after heavy rains left the terraces flooded and shimmering with reflections. 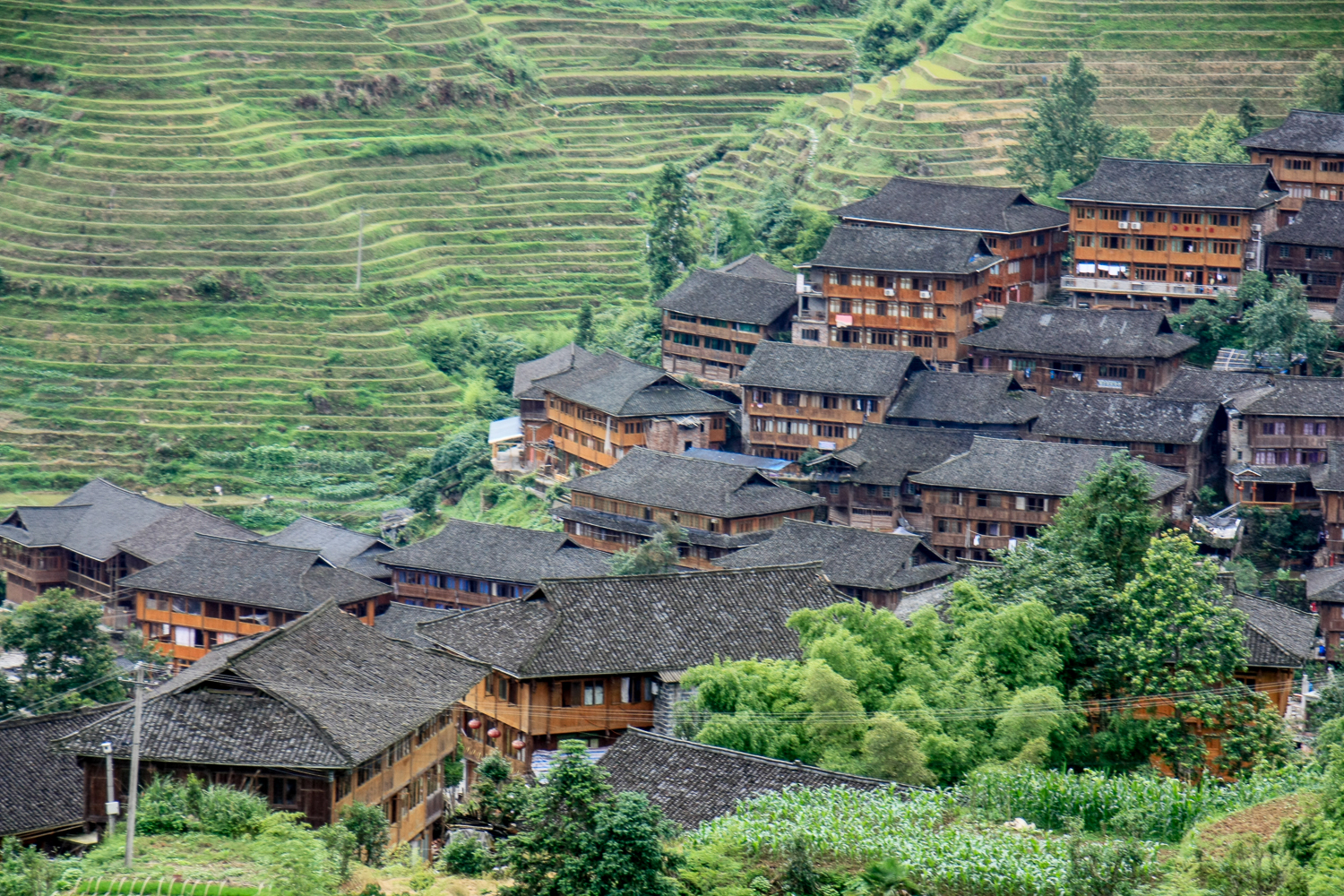 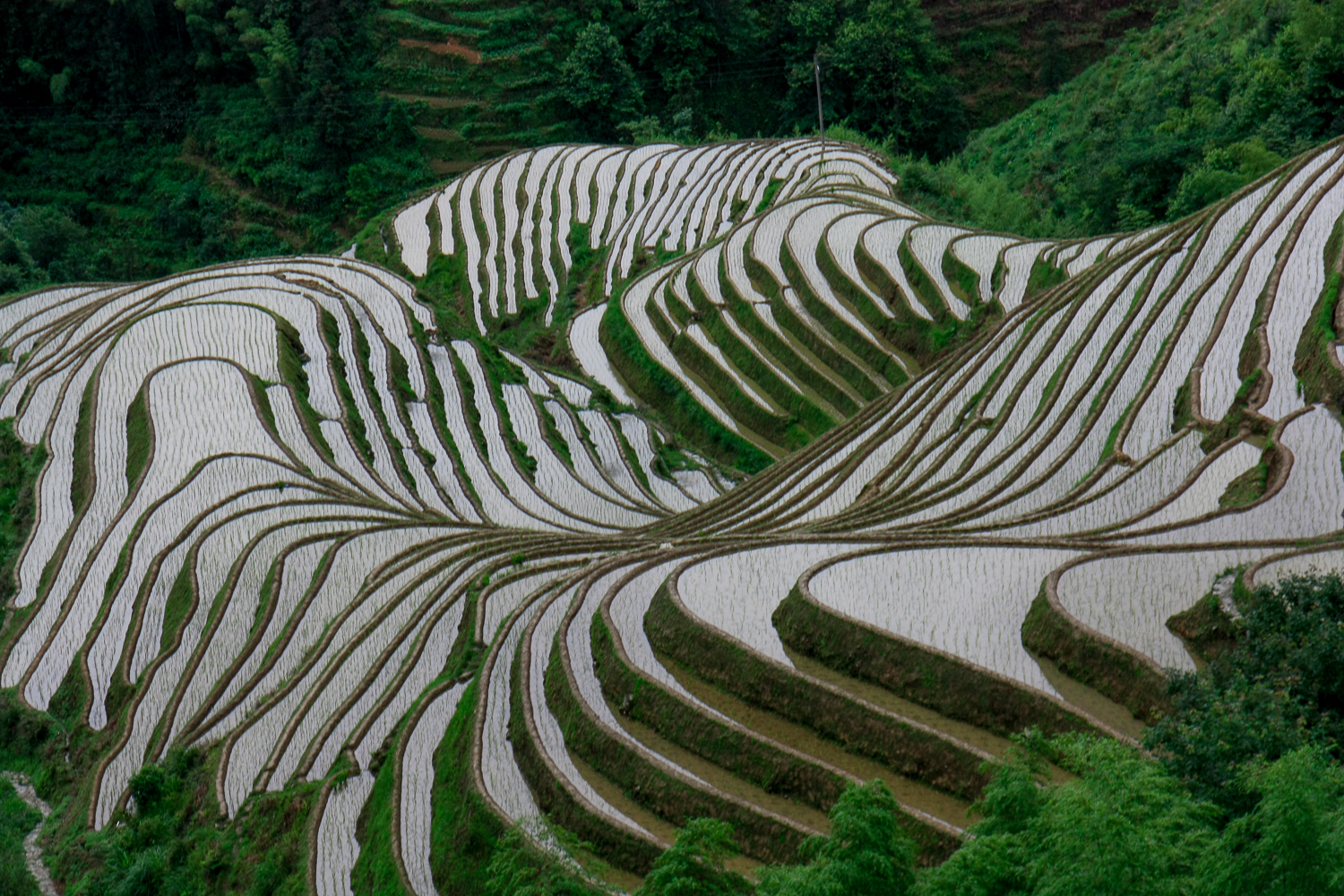 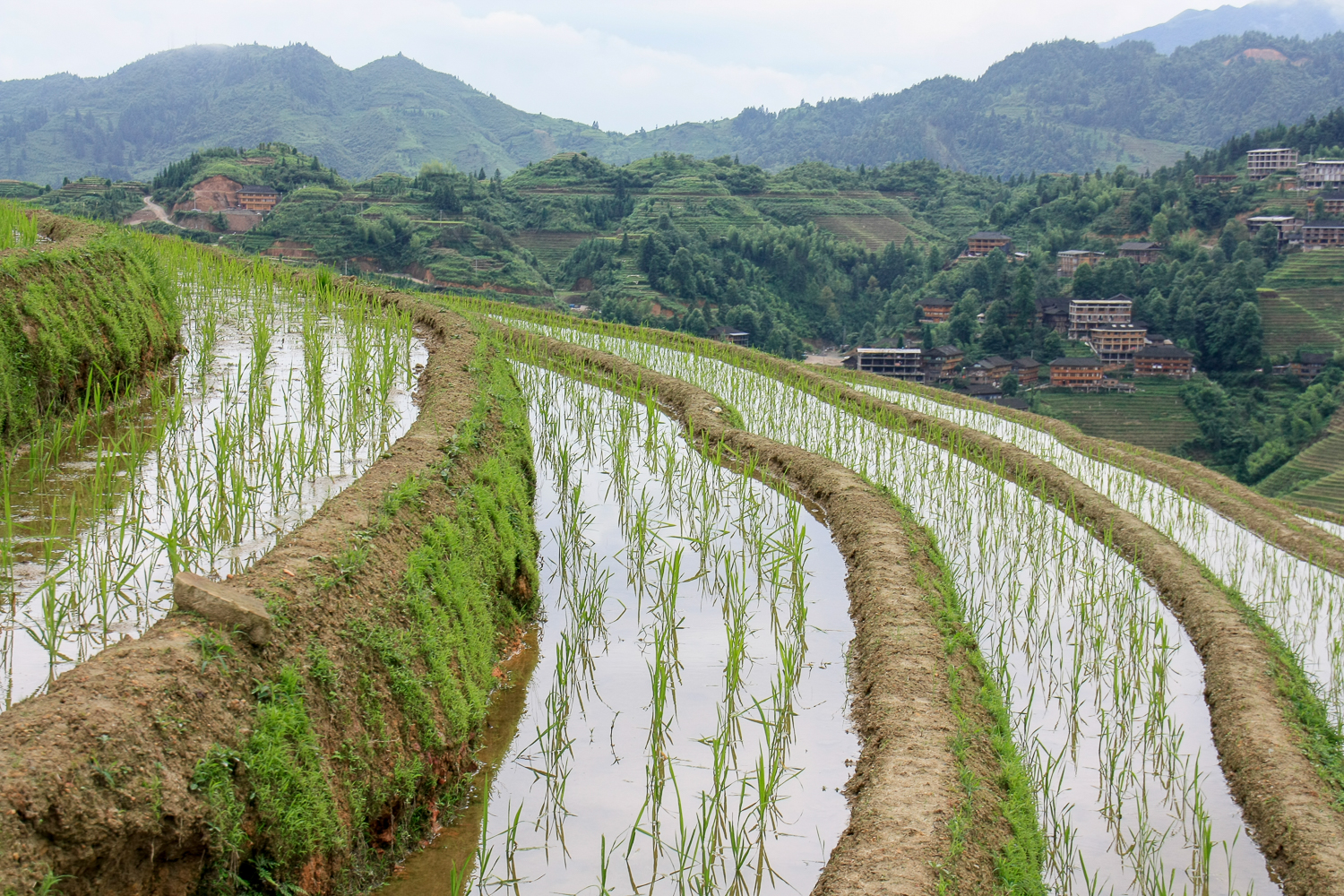 While the slippery paths prevented us from wandering too far off, we were able to wander a few of the terraces, catching the occasional local toiling their fields, even in traditional dress. On the cable car ride down, we could notice flooded footprints on every single terrace in sight, lining up and down. Every single terrace is still used and maintained, after what I presume are centuries. It put the whole vista in another perspective: an incredible amount of toil and labour, year after year, of planting and harvesting. 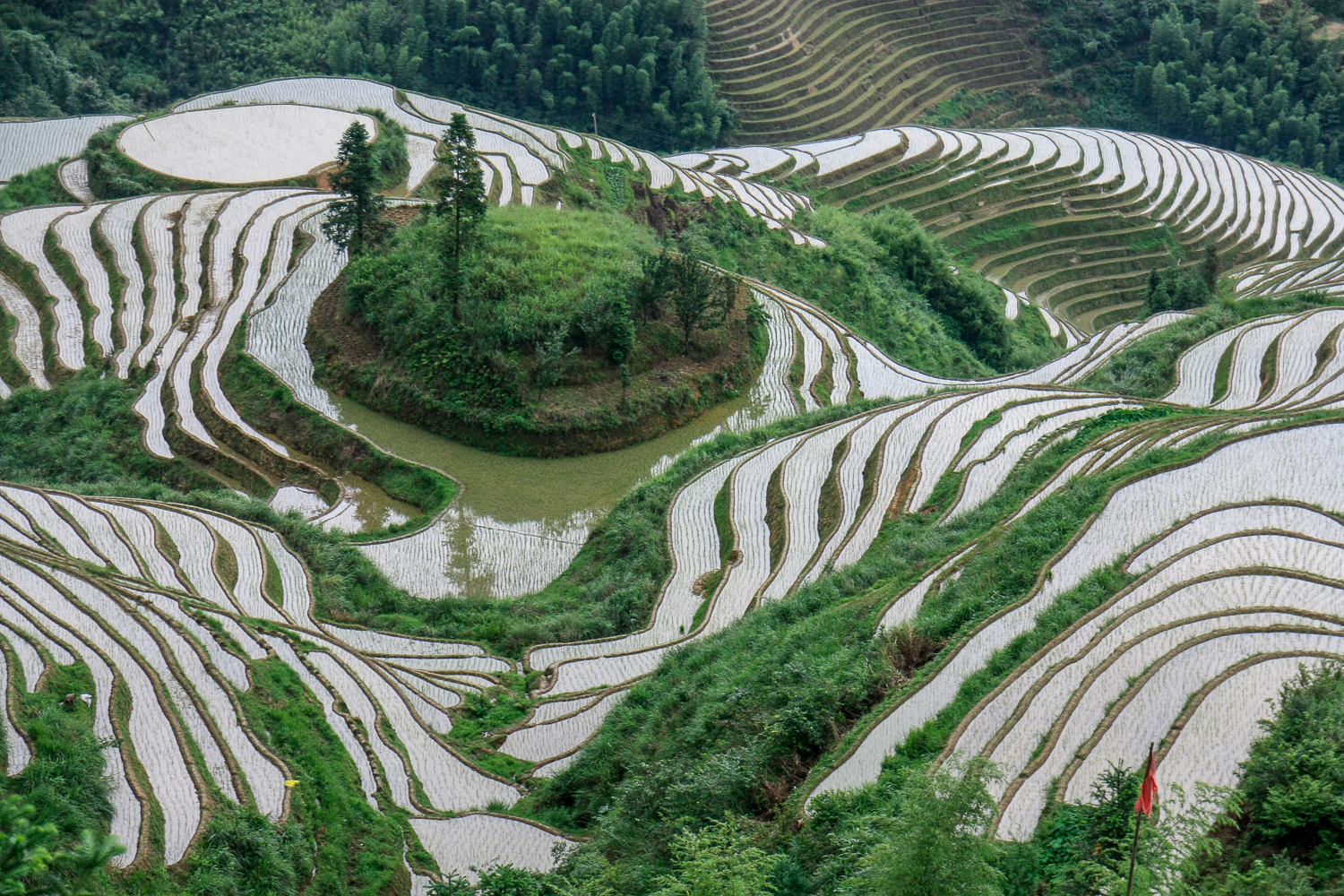 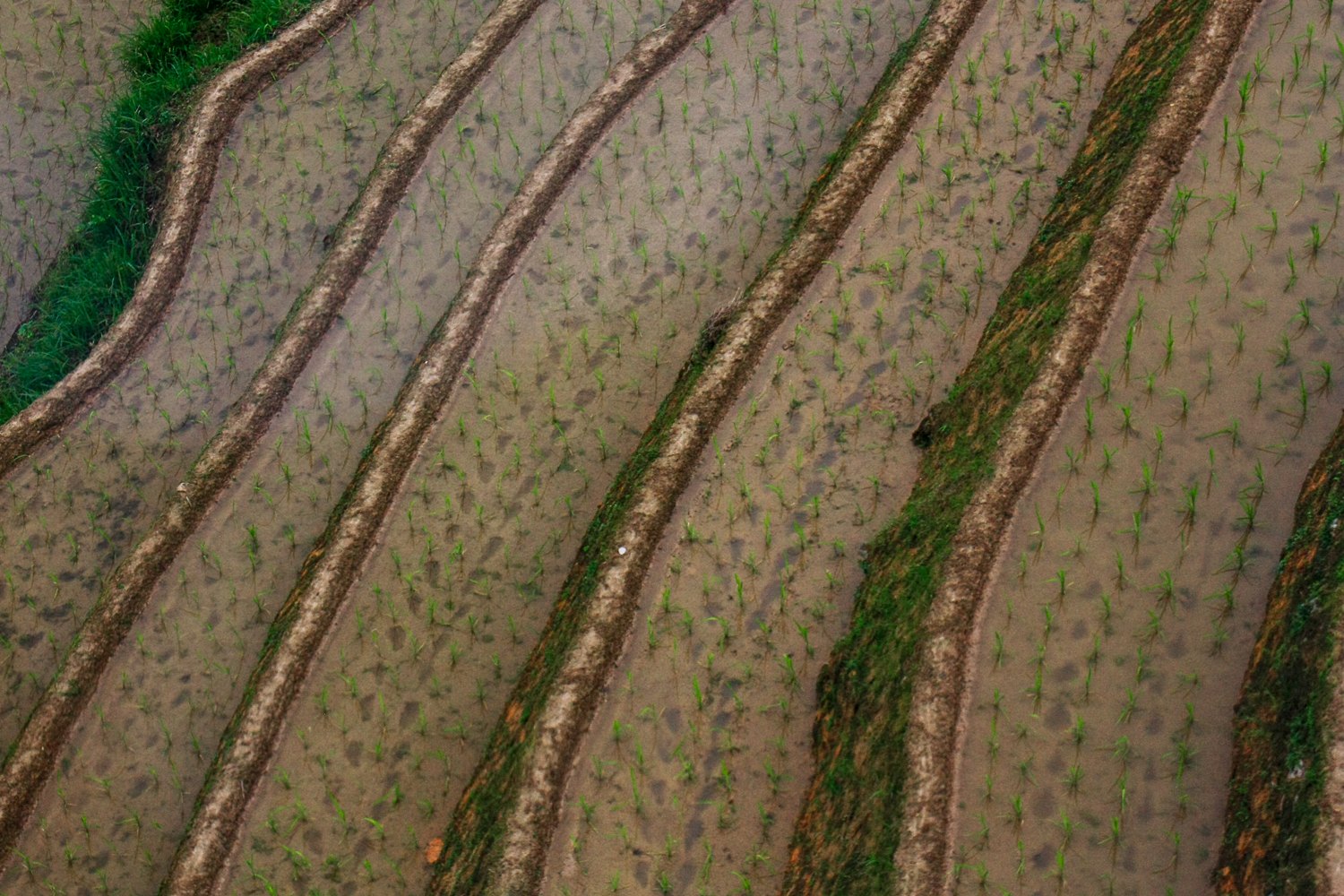 For my family, this trip was a chance to see things we had only imagined through paintings and cultural lore, and things we simply hadn’t even imagined. To see it all in front of our eyes, together, was an immensely gratifying experience.

3 thoughts on “甲天下 / Under heaven”