Home to two of the biggest Buddhist monasteries in the world, something is going on here and no one’s talking.

Access to Sertar has just begun to be prohibited for foreigners, but there’s a feeling that Yarchen may suffer the same fate soon. Since I’m technically not a foreigner, I was able to waltz right into both places. (As with Tibet province.) Plenty of domestic tourists. Nothing felt amiss.

I took two overnight trips while based in Garzê: first, to Yarchen Gar (Chinese: Yaqing Si 亚青寺), a sprawling monastery city where everyone’s a monk or nun. Well, mostly nuns — way more nuns than monks, in fact. The view from the hilltop is a sight to behold. 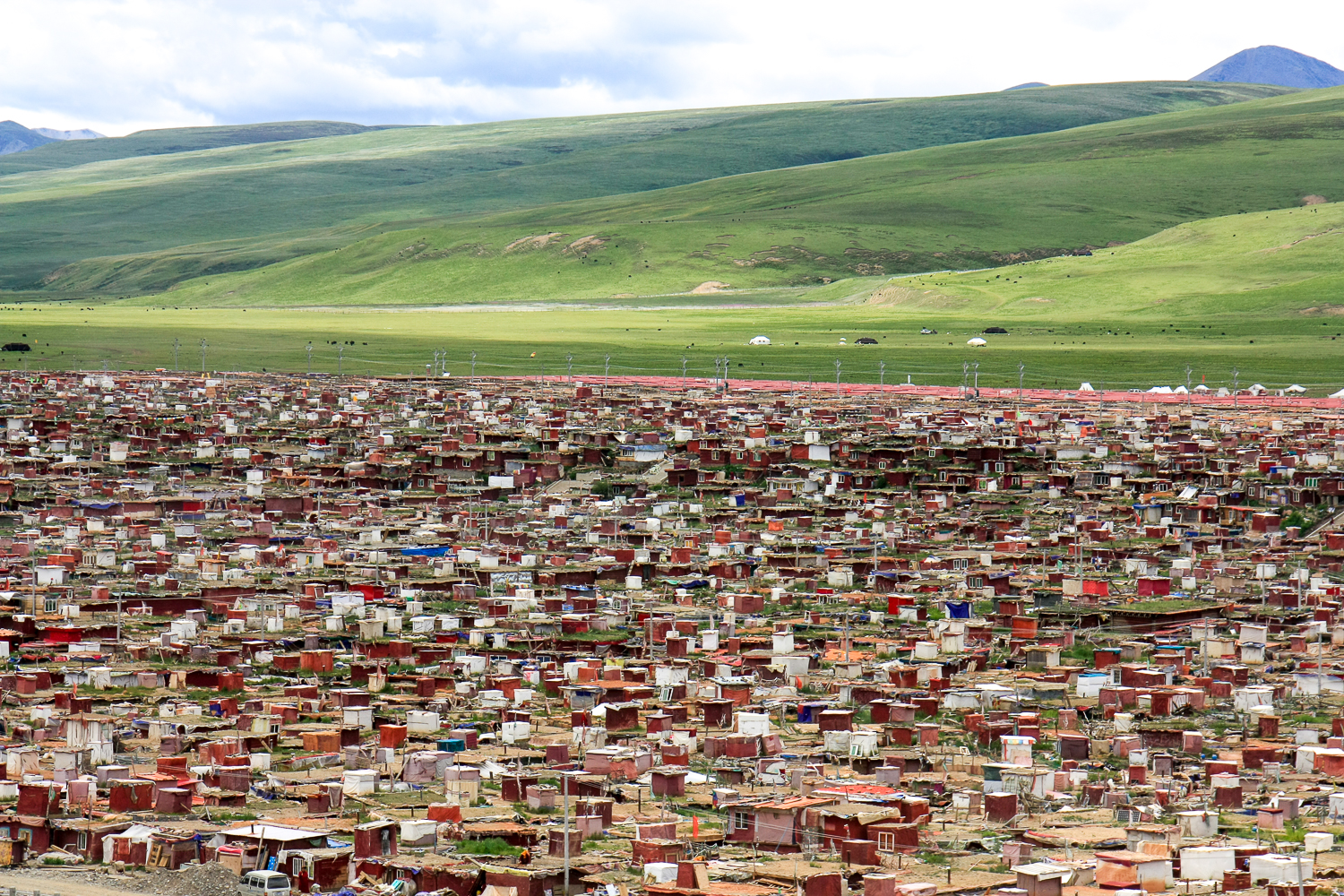 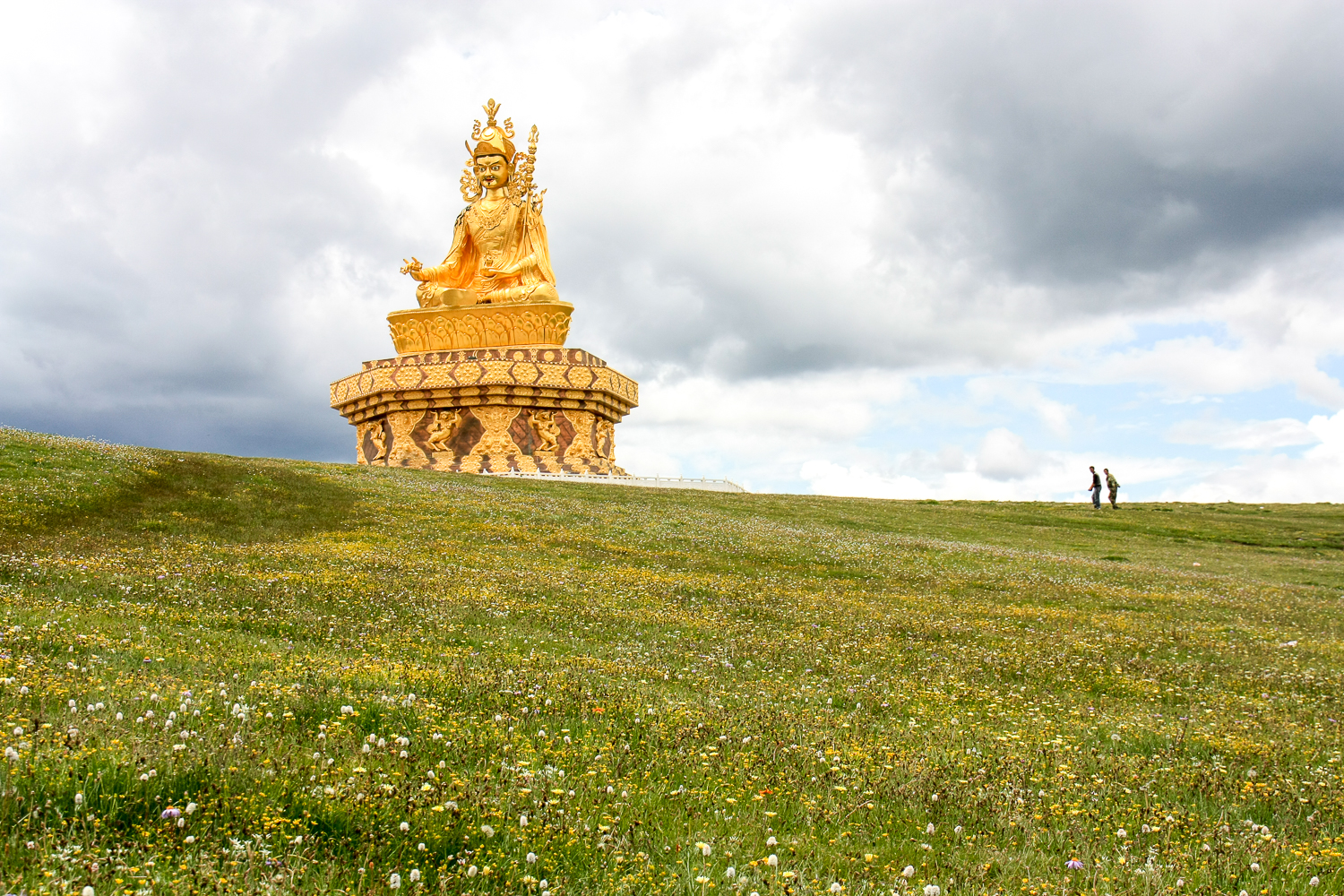 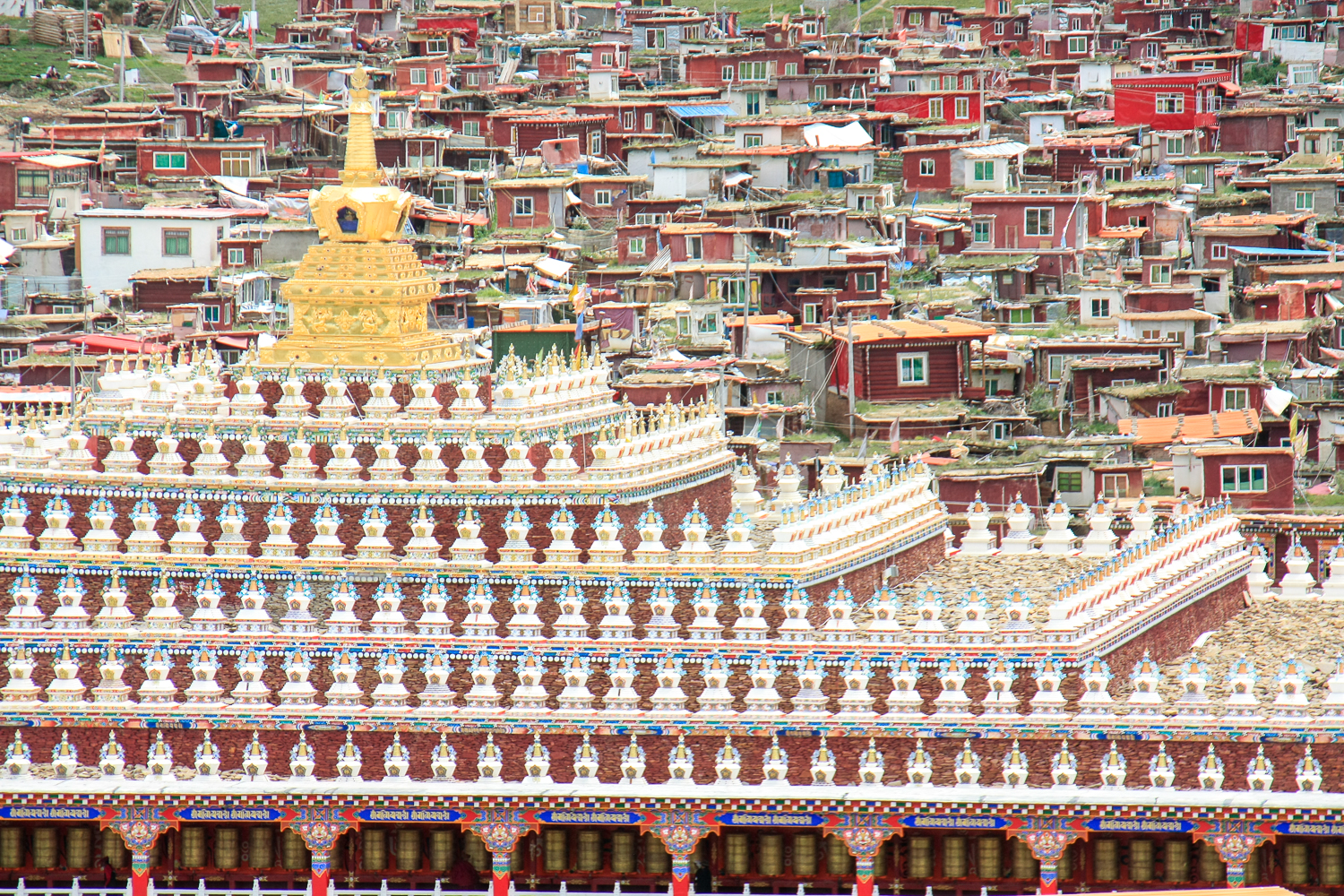 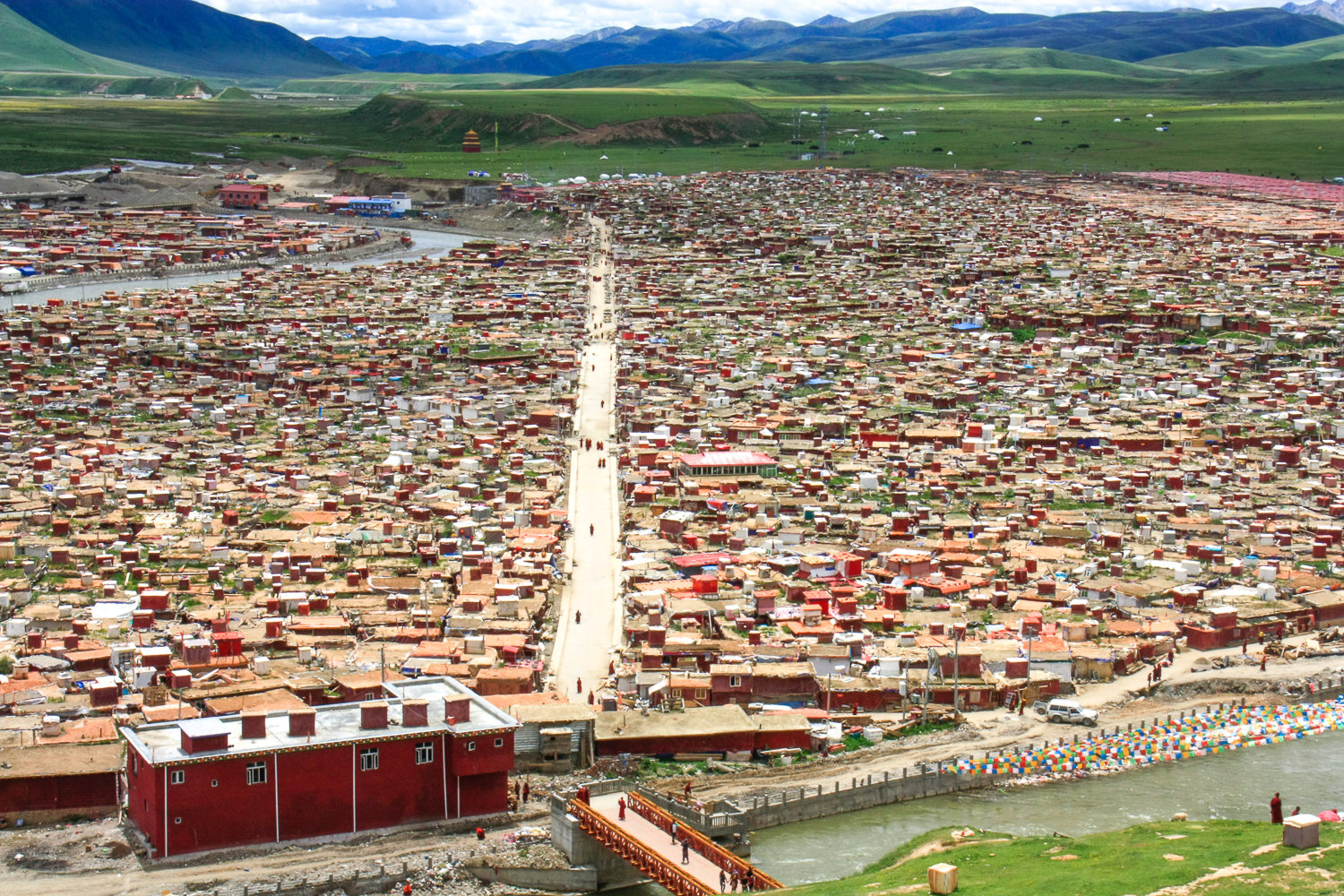 Scattered on the hillside are tiny huts with nothing but a door and maybe a window: nuns meditate inside for 100 days, with food brought to them, never exiting unless to relieve themselves. There’s little in the way of insulation or protection — and with the searing sun and the high altitude cold, that’s placing themselves in some pretty extreme conditions! 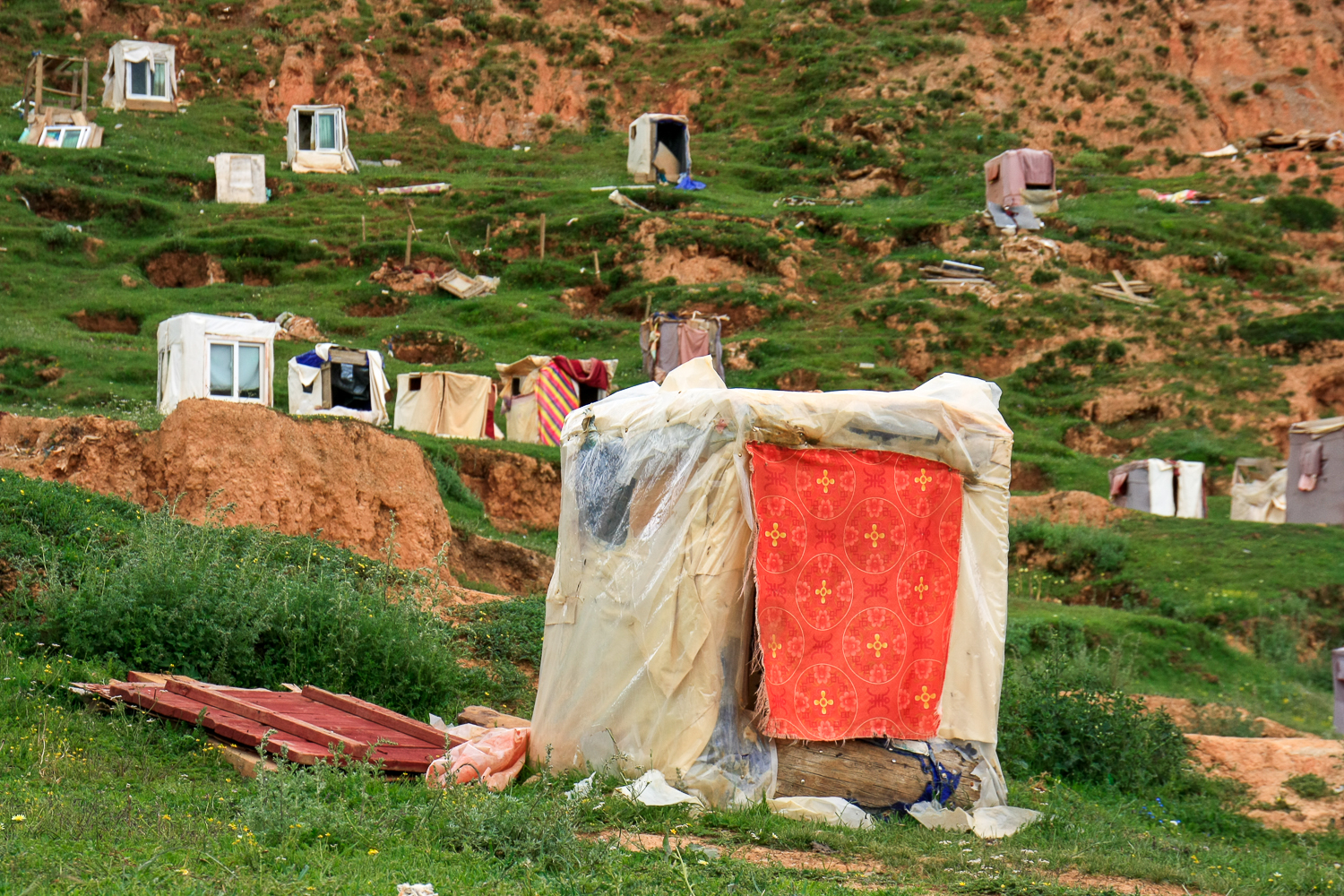 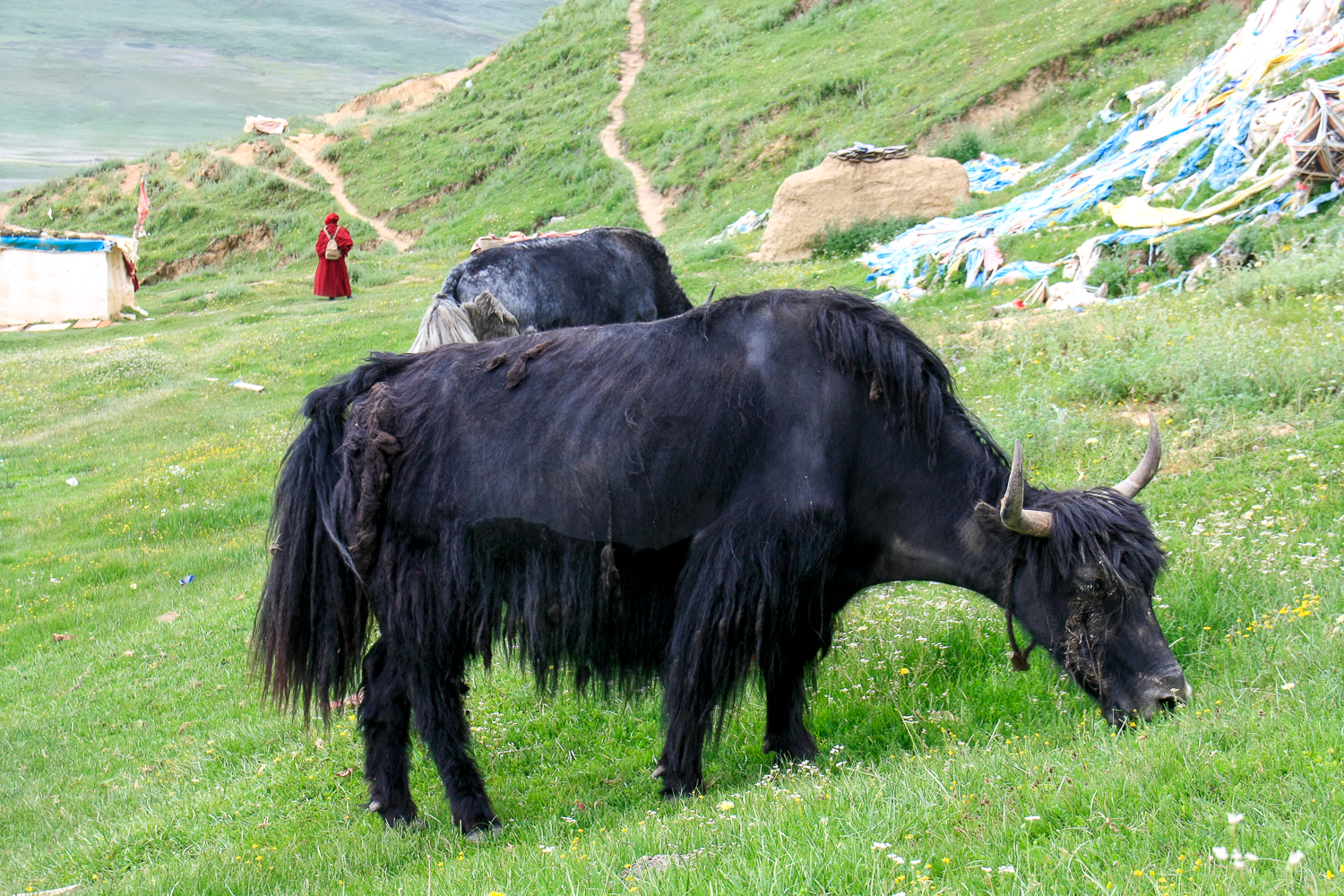 At the bottom of the hill, in what looks like an island, is a sprawling settlement of only nuns. I wandered in three times, with nuns speaking only Tibetan pointing me towards the exit — I think that’s a sign that maybe men aren’t allowed. Heh. As surreal as it is to see a functioning city of only women who are all dressed the same, there’s some serious signs of overcrowding. There are no toilets to speak of, with nuns relieving themselves out in the open. And while you can see nuns diligently climbing ladders, hammering away, and fixing up their homes, not only is there barely any space between the houses, but some of them are in serious disrepair — all lived in. It’s not just a city, it’s a slum. And they’re fine with it all: they came here to study Tibetan Buddhism, and all they need are the barest of necessities. 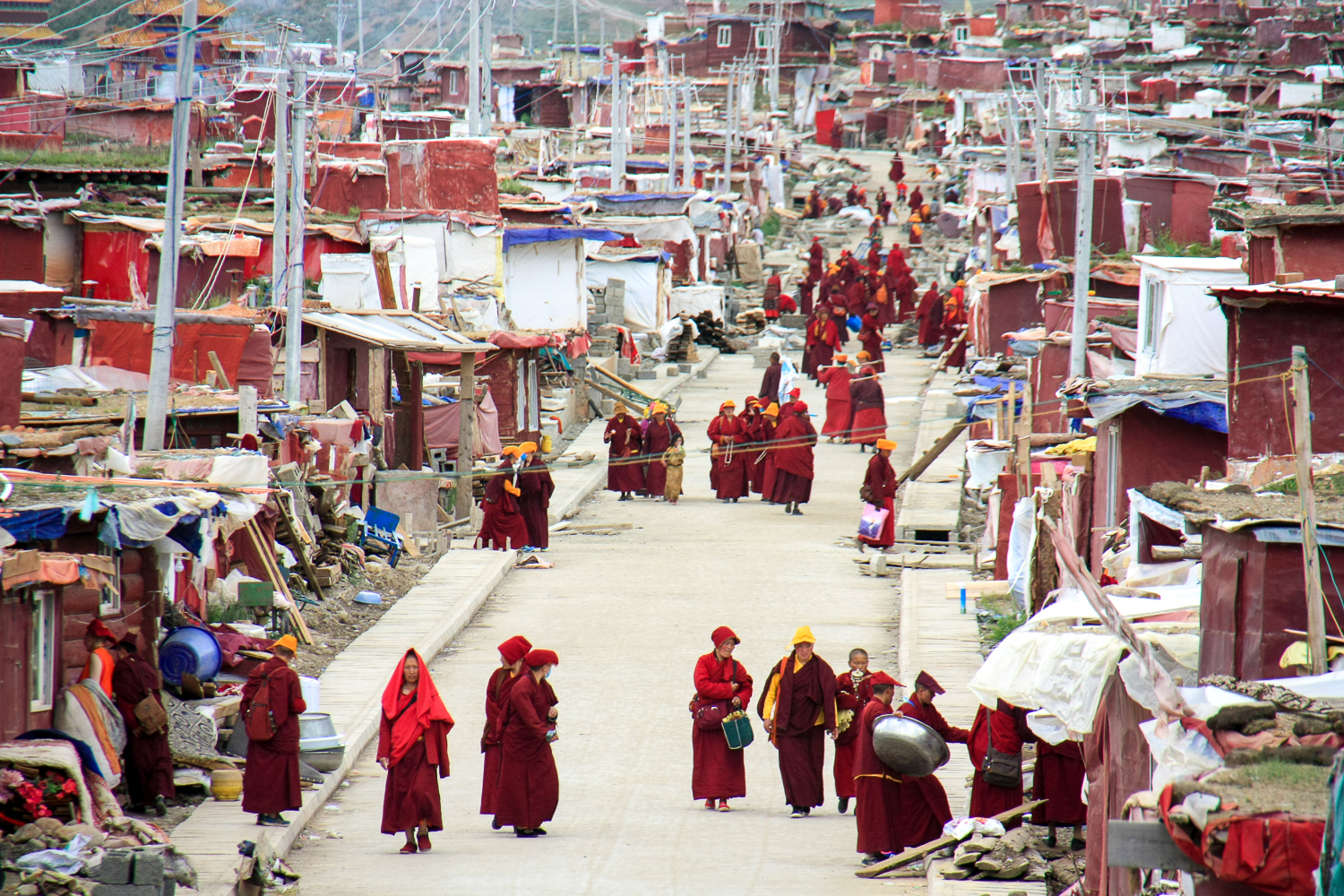 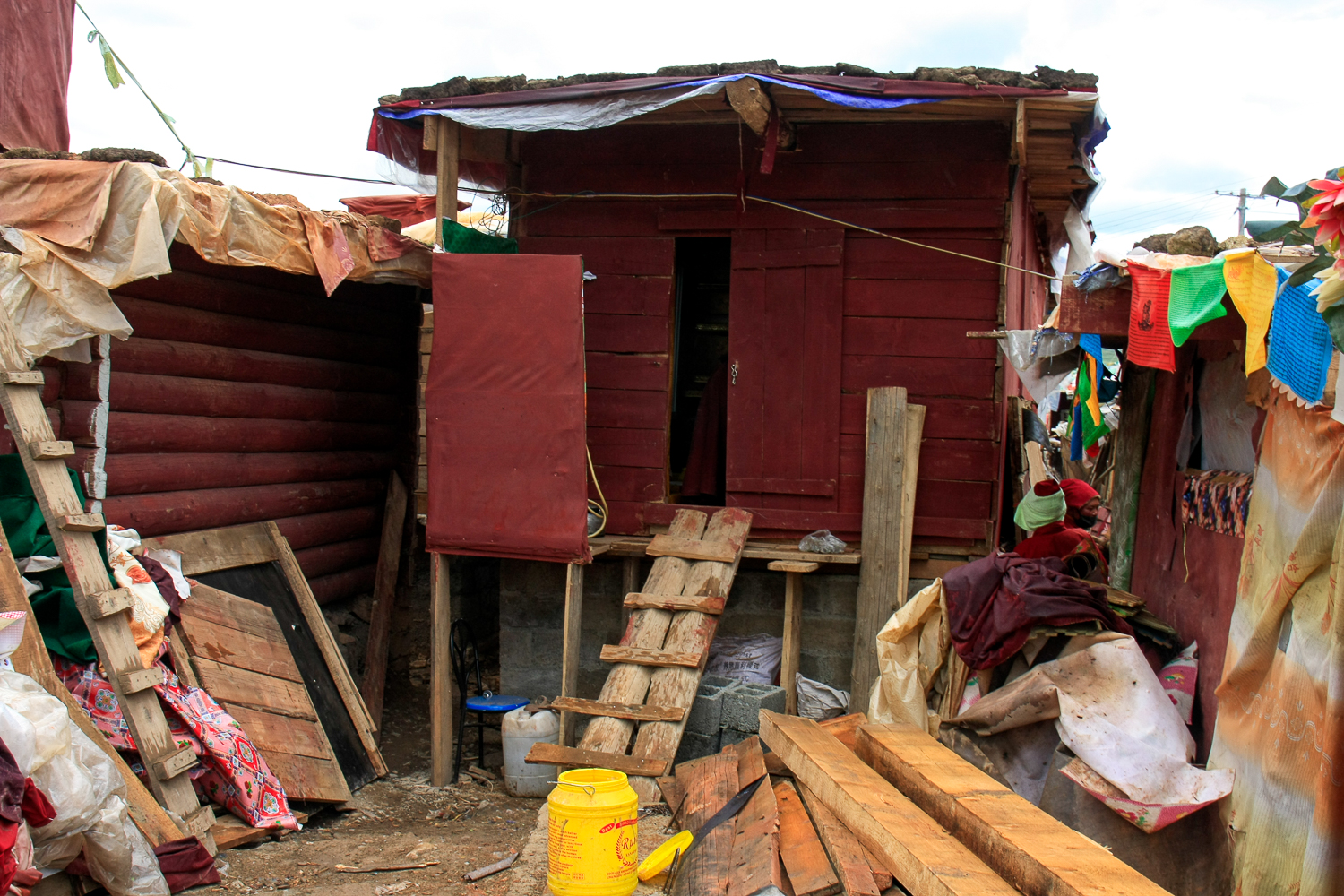 (Though… are iPads the barest of necessities? Nuns like selfies too.) 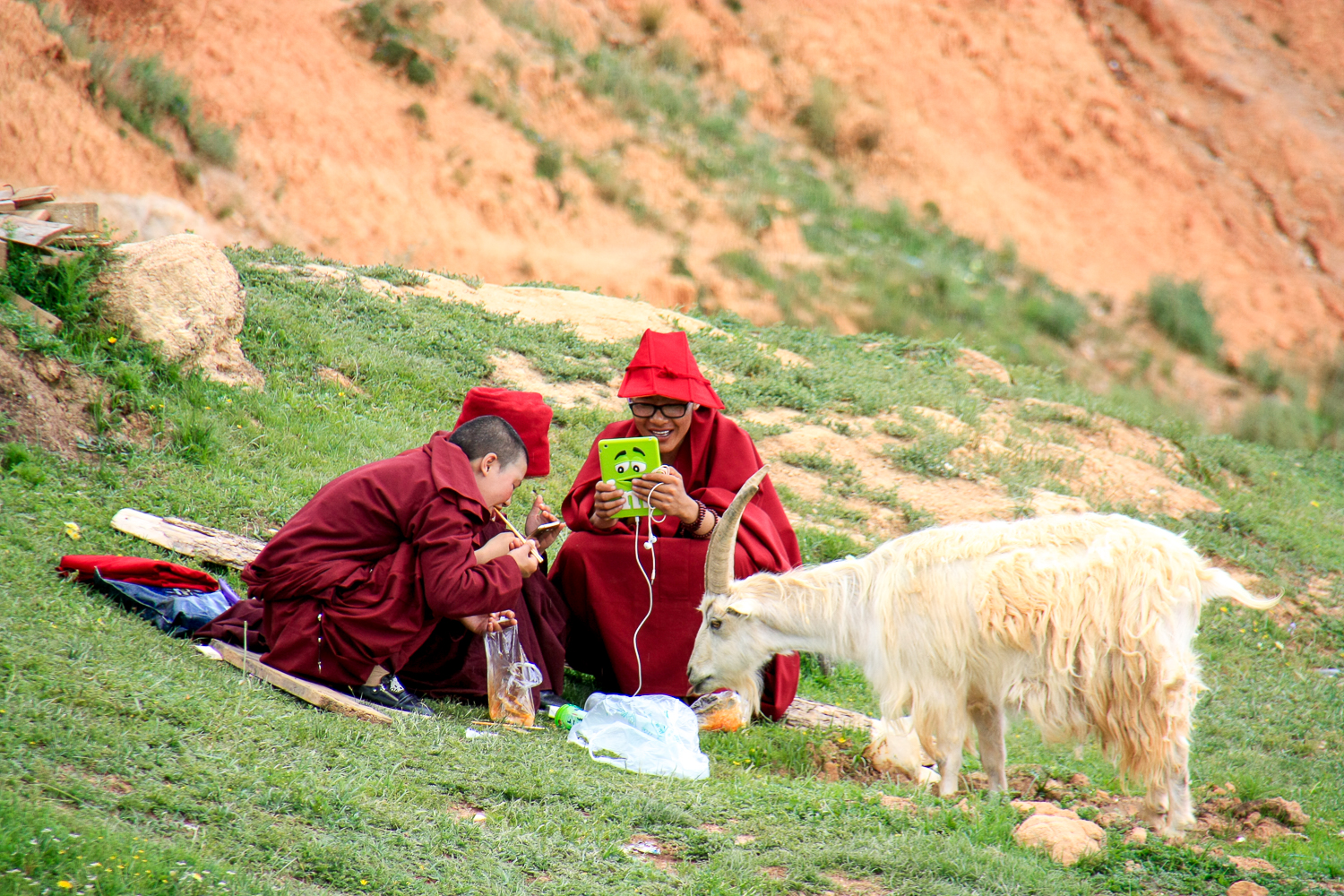 Men do live at the monastery too, but on the other side of the river, strictly gender-segregated. When the temple rings out with calls to prayer, the entirety of Yarchen springs alive, with everyone swarming towards whichever of the temples they need to be at.

And at night… well, they go to my rundown guesthouse’s restaurant to sip on butter tea and watch really terrible soapy Tibetan movies, boasting beautifully shot Tibetan hillside scenery in HD with the slowest, plodding, predictable dialogue (hey, I read the Chinese subtitles) I’ve ever encountered, cheesy music cues telling you exactly how you should feel (love story music! action music! hot lady music! scary music!), and hilariously fake kung fu. Hey, if that’s the only form of entertainment the monks and nuns get, so be it. 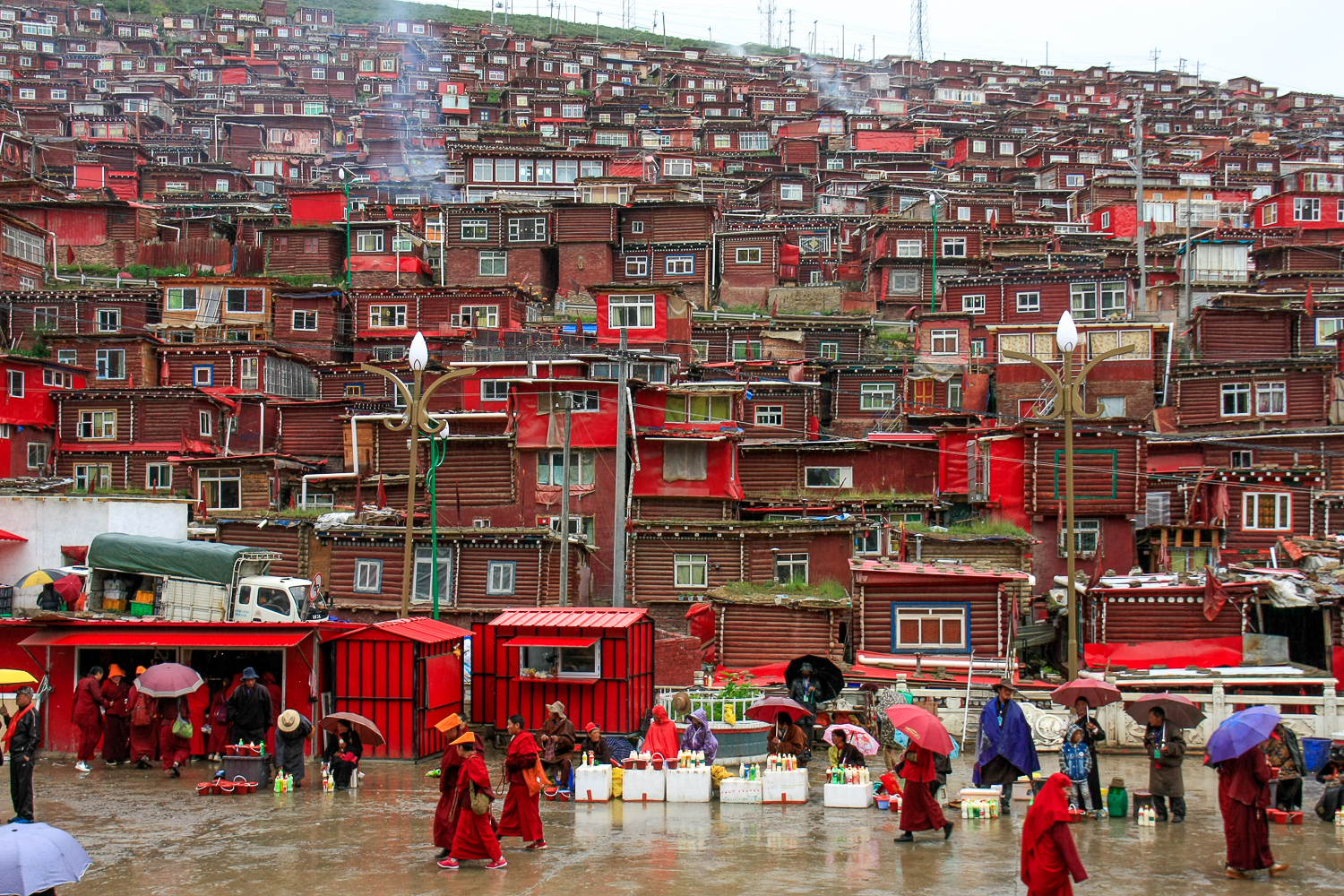 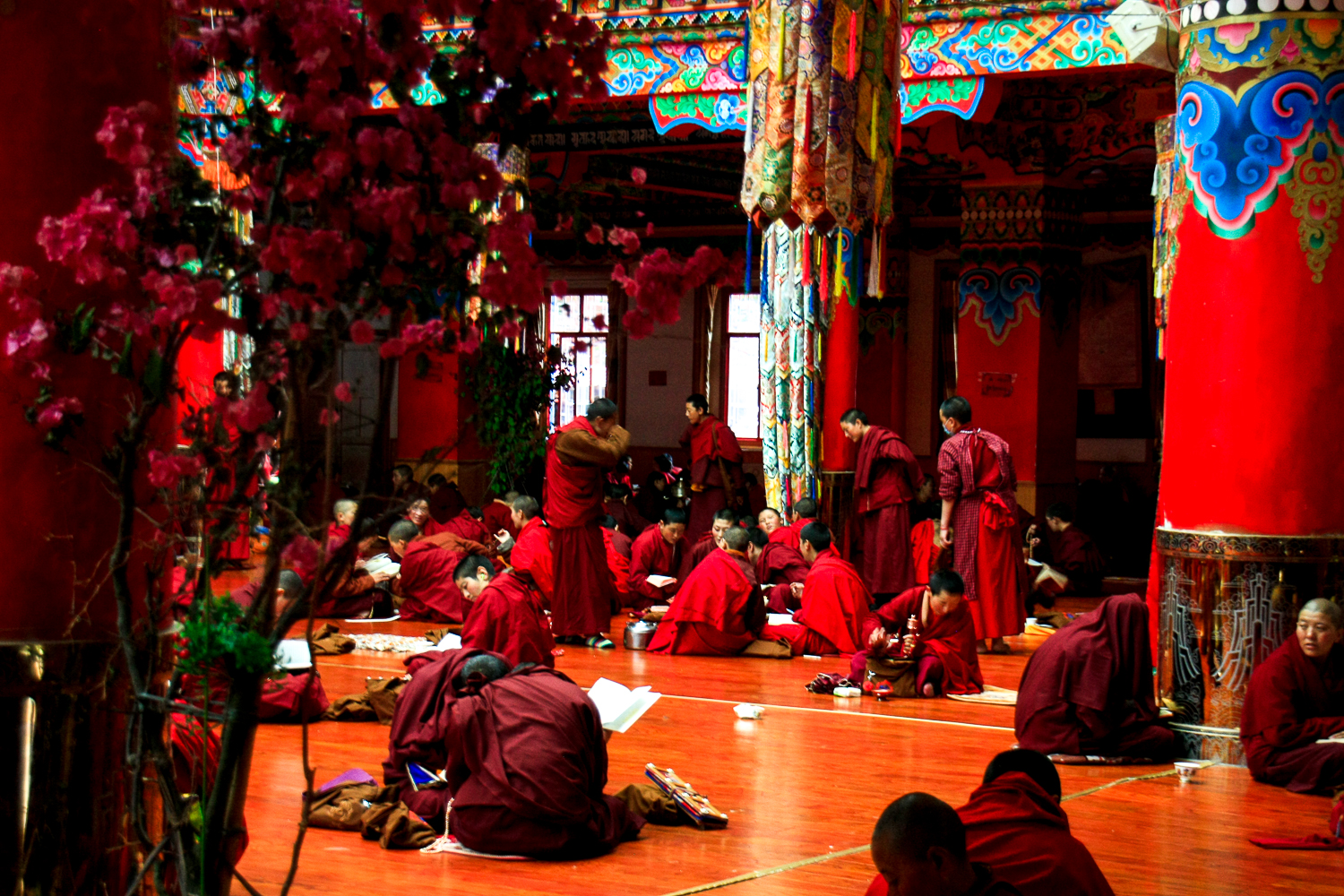 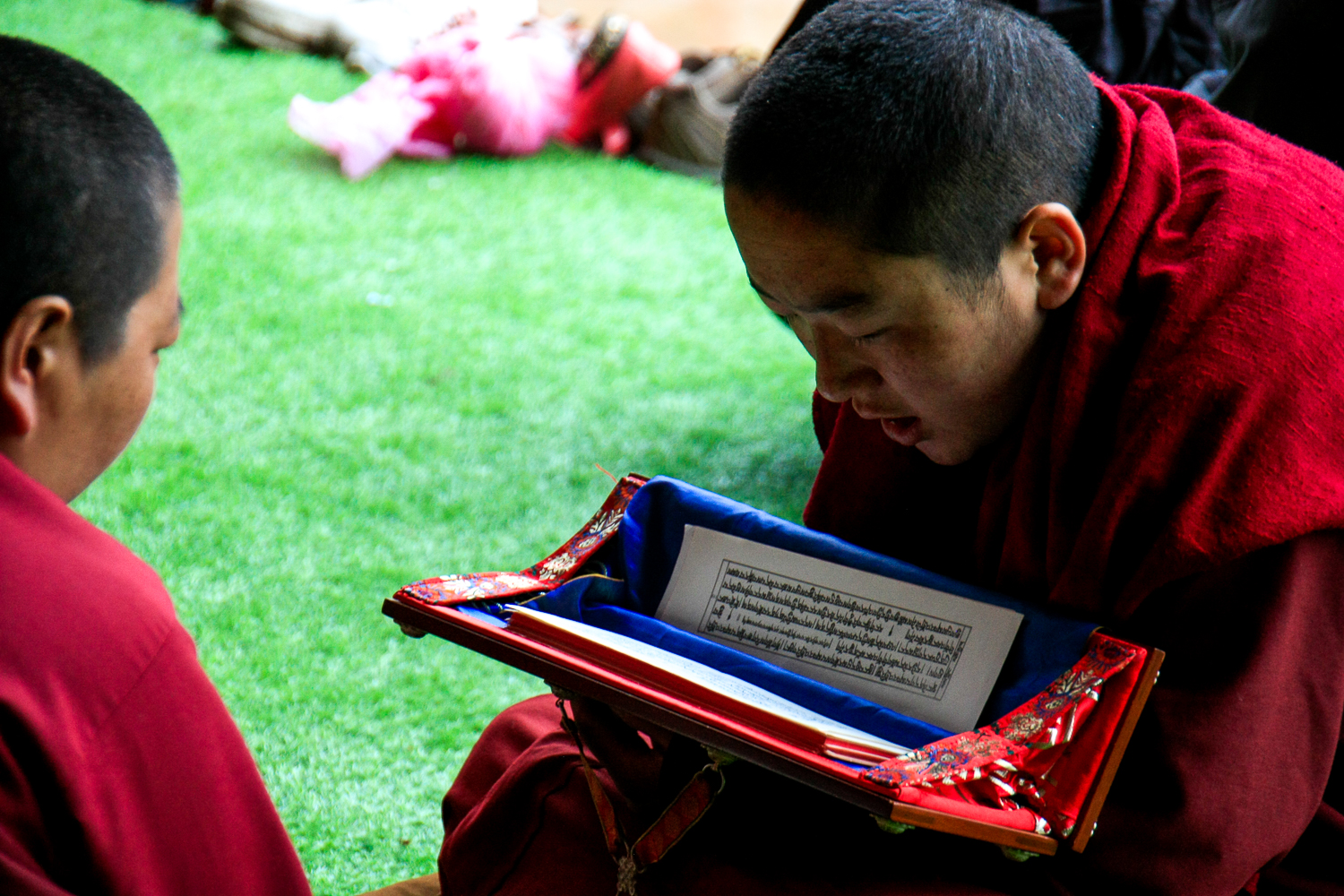 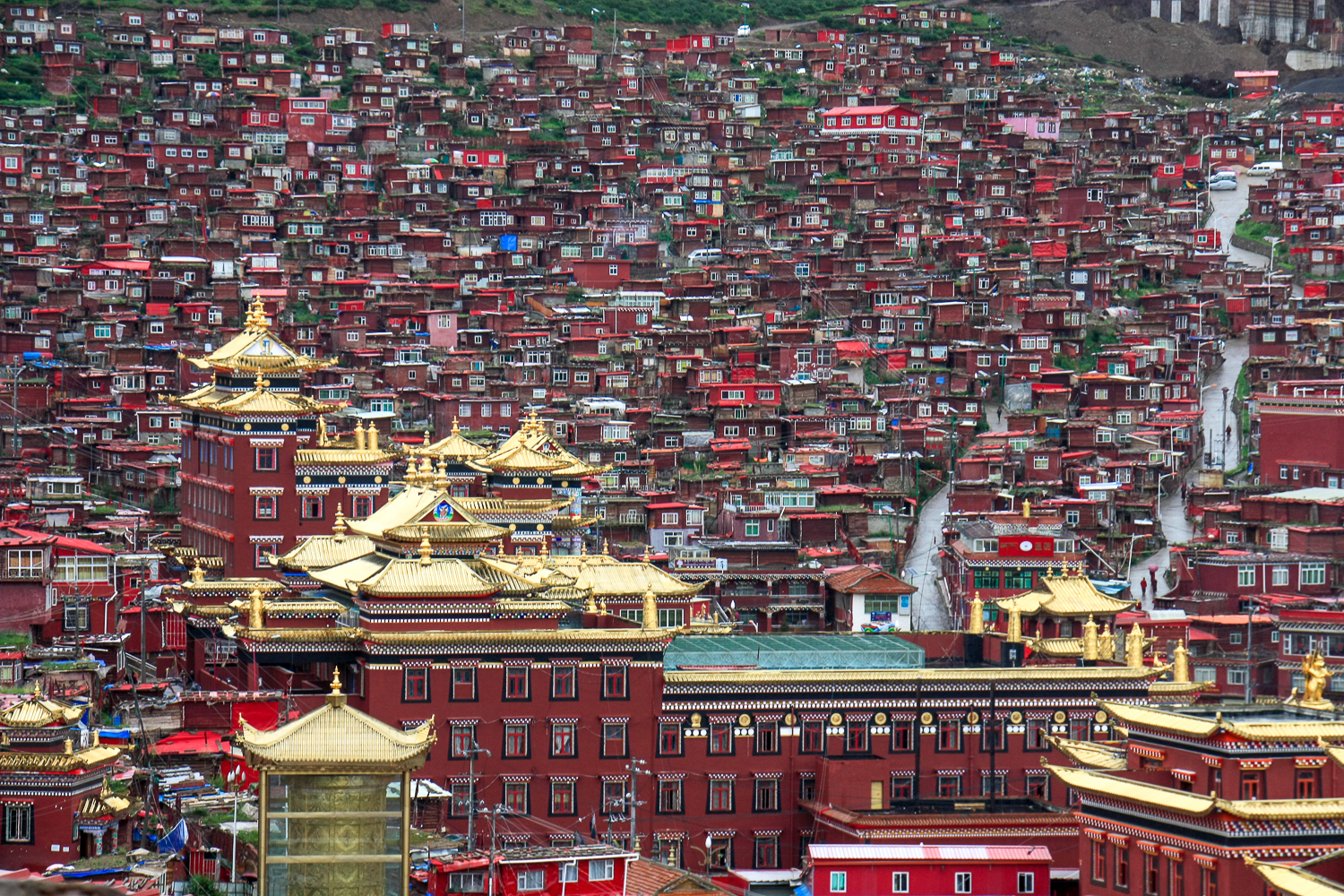 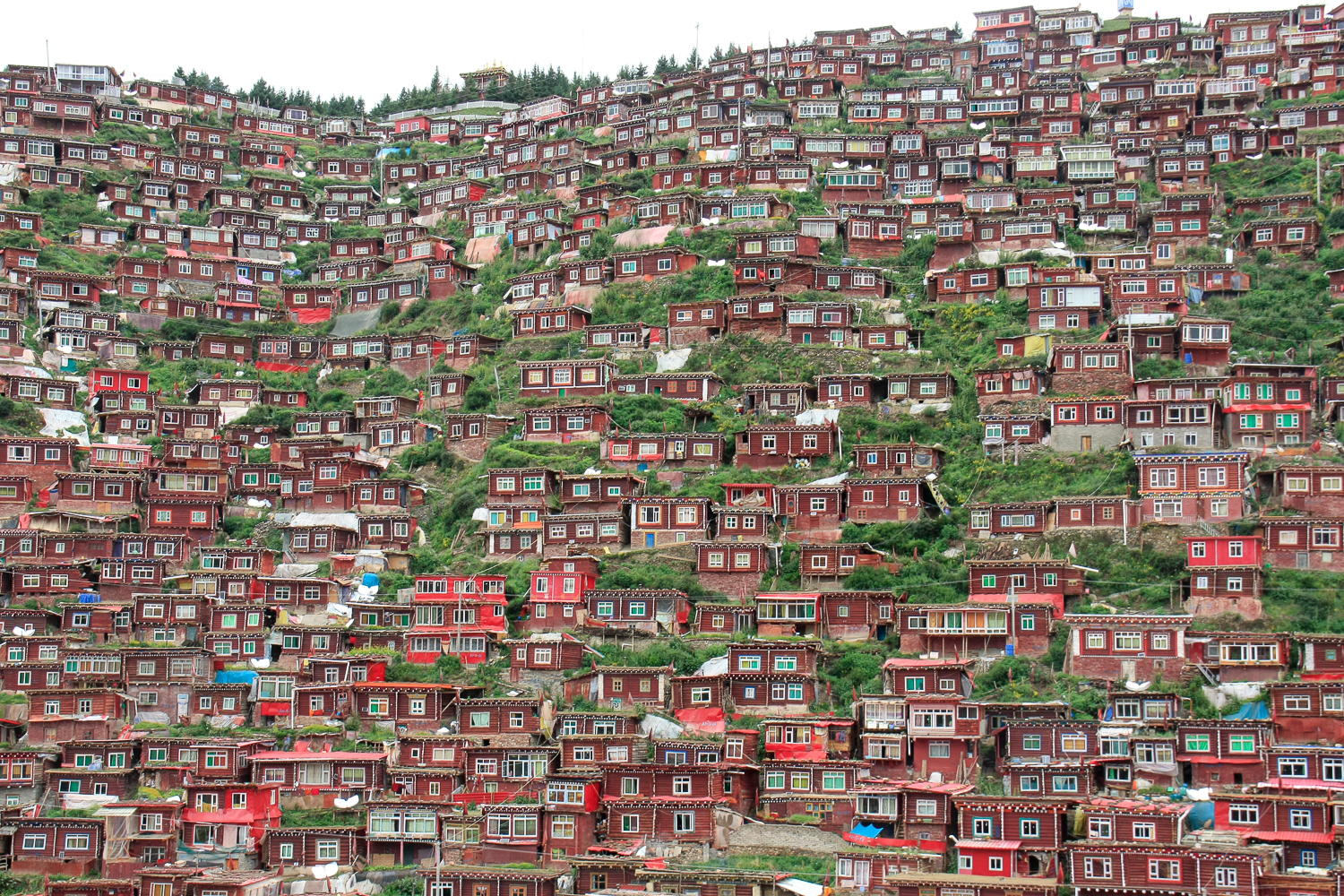 The houses in Larung Gar are a fair bit more well-constructed with amenities, compared to those in Yarchen Gar. A peek through windows led me to see flatscreen TVs and satellites, bookshelves, small kitchens, gardens, and even personal sets of prayer wheels. The public areas of the monastery are also evidently more affluent, with gleaming gold temples and the largest prayer wheel I’ve ever seen. At night, the thousands of houses light up, fully wired to the grid, appearing like a starry night sky — moreso if it weren’t for the fog and rain during my visit. 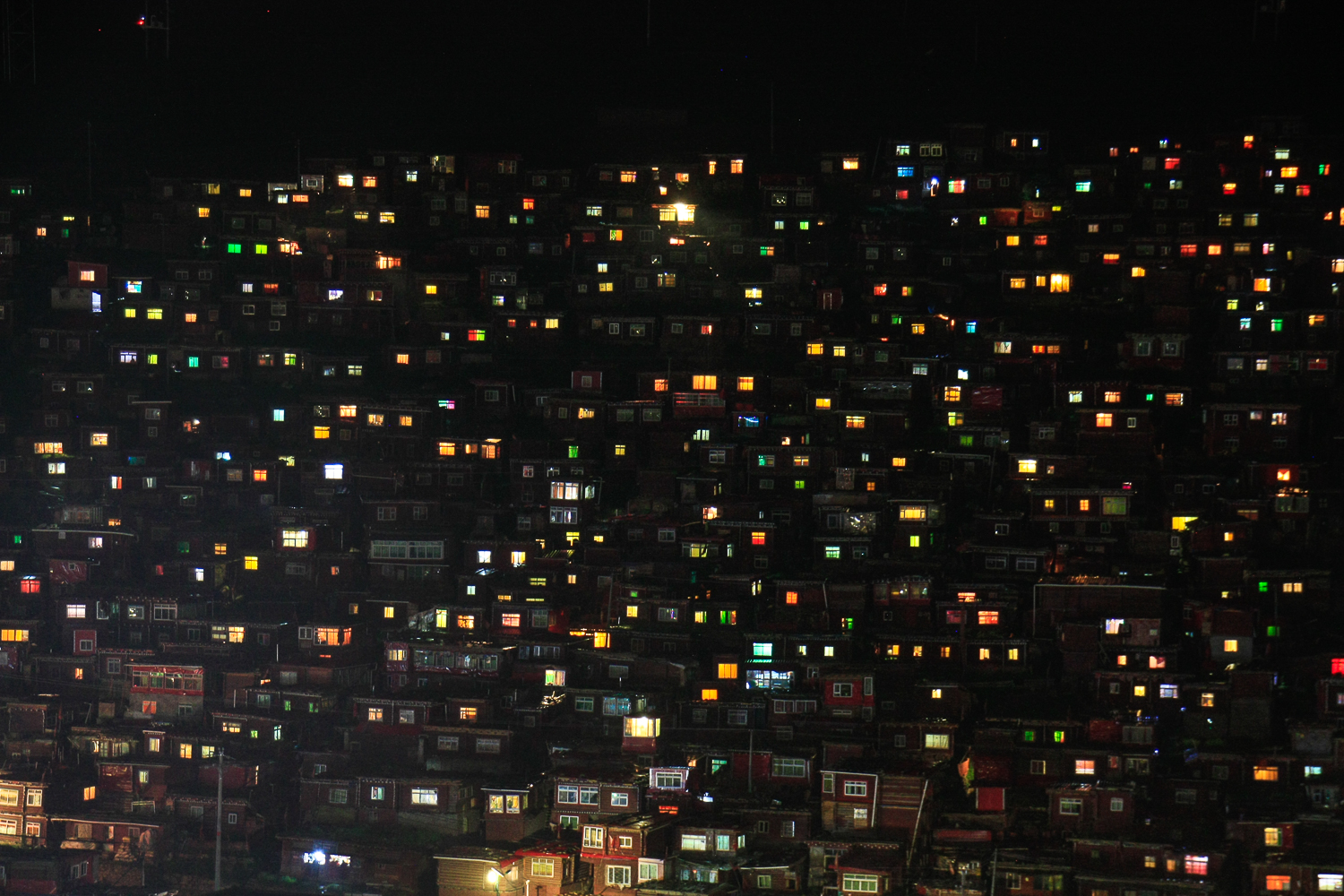 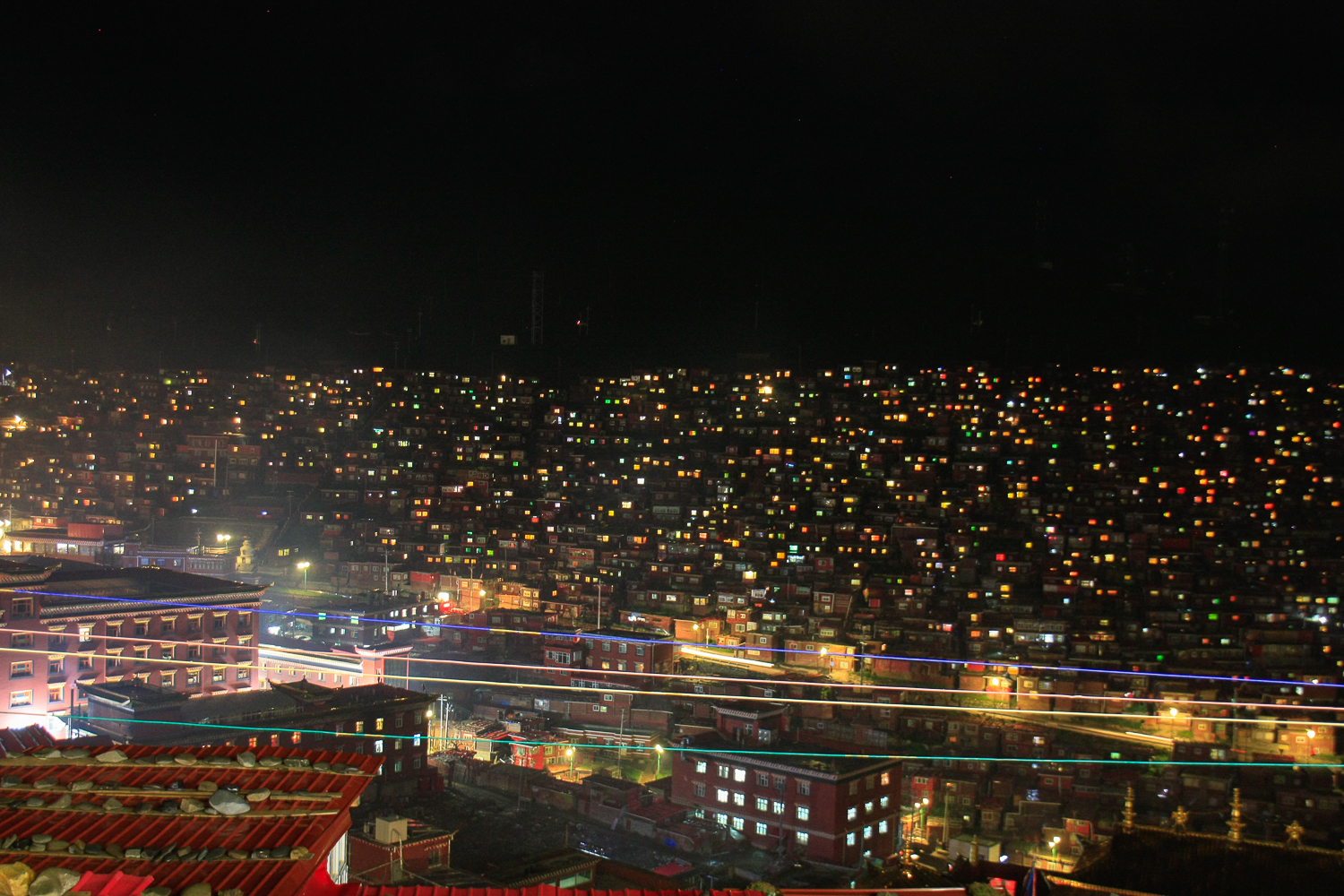 On a nearby hill every afternoon, Tibetan sky burials (jhator) are performed. Usually a private ritual, the rather garish location next to some ugly yet clearly tourist-oriented Buddhist murals and sculptures, along with the horde of tourists (including myself) standing on the side makes for a rather unsettling feeling. And how does this place manage to get 3-6 people to bury every day, when Tibetans typically perform last rites and a sky burial within three days of death? Yet… here are Tibetans from the area and their families, bringing their deceased loved ones.

And there are hungry vultures and crows circling above, forming something akin to a tornado. Clearly they aren’t being overfed. 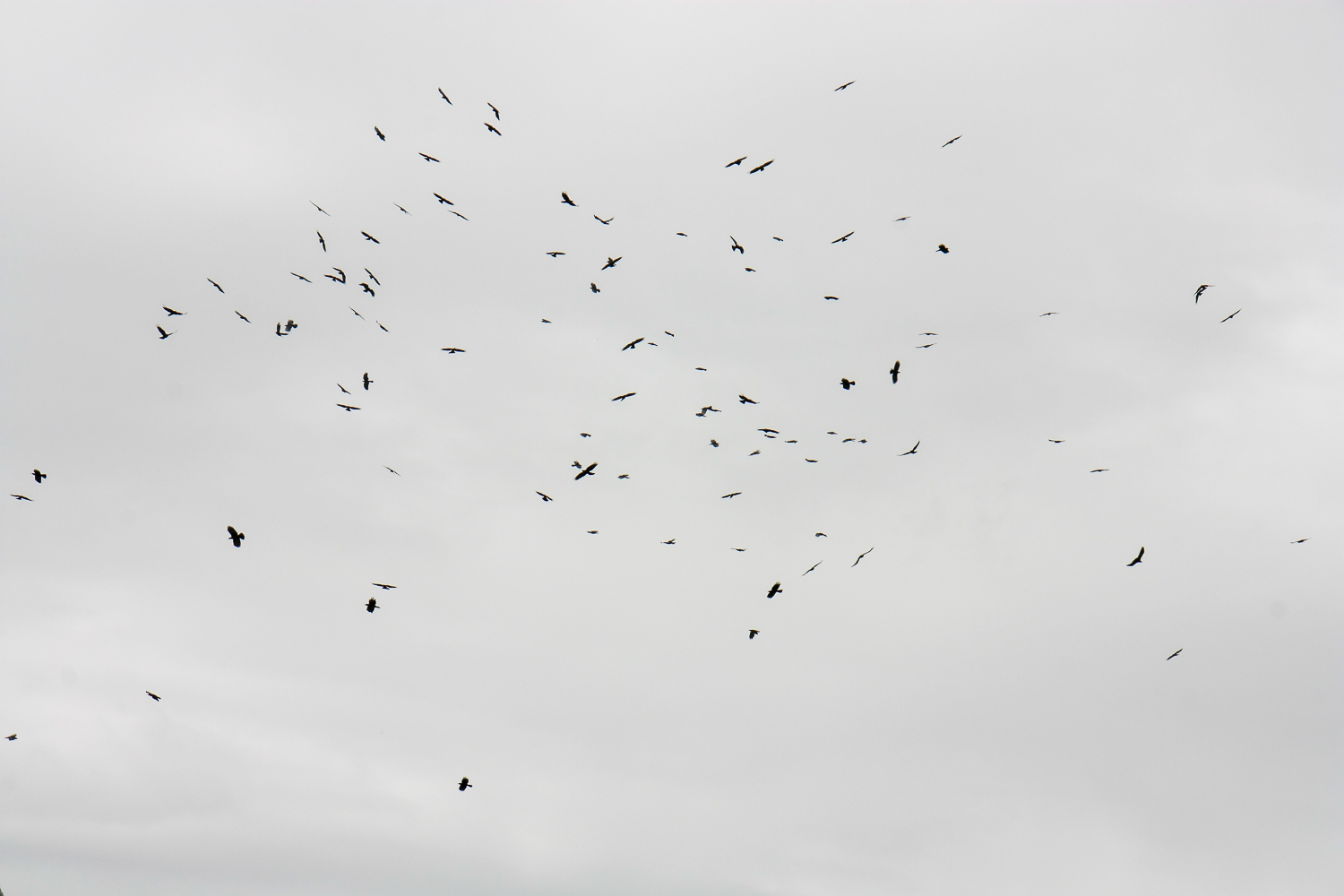 Monks put up a privacy barrier. The corpses of the deceased — including at least one child — are brought in. Most of the loved ones leave. The crowd can’t see what’s going on, but we can hear it. The rogyapa — I guess you’d call that the Tibetan equivalent of an undertaker — preps his knife. We can hear large chopping noises: bones. The rogyapa then goes from the bodies to the loved ones, giving them something, as they pay him.

A monk on the field has been holding the vultures who have gathered at bay, and finally relents. They swarm down, and another monk pulls down the privacy barrier: there’s nothing left to see but birds. (Well, wait a few minutes and you’ll see flashes of skin and flesh, and wait a few more and you’ll see a skeleton.) 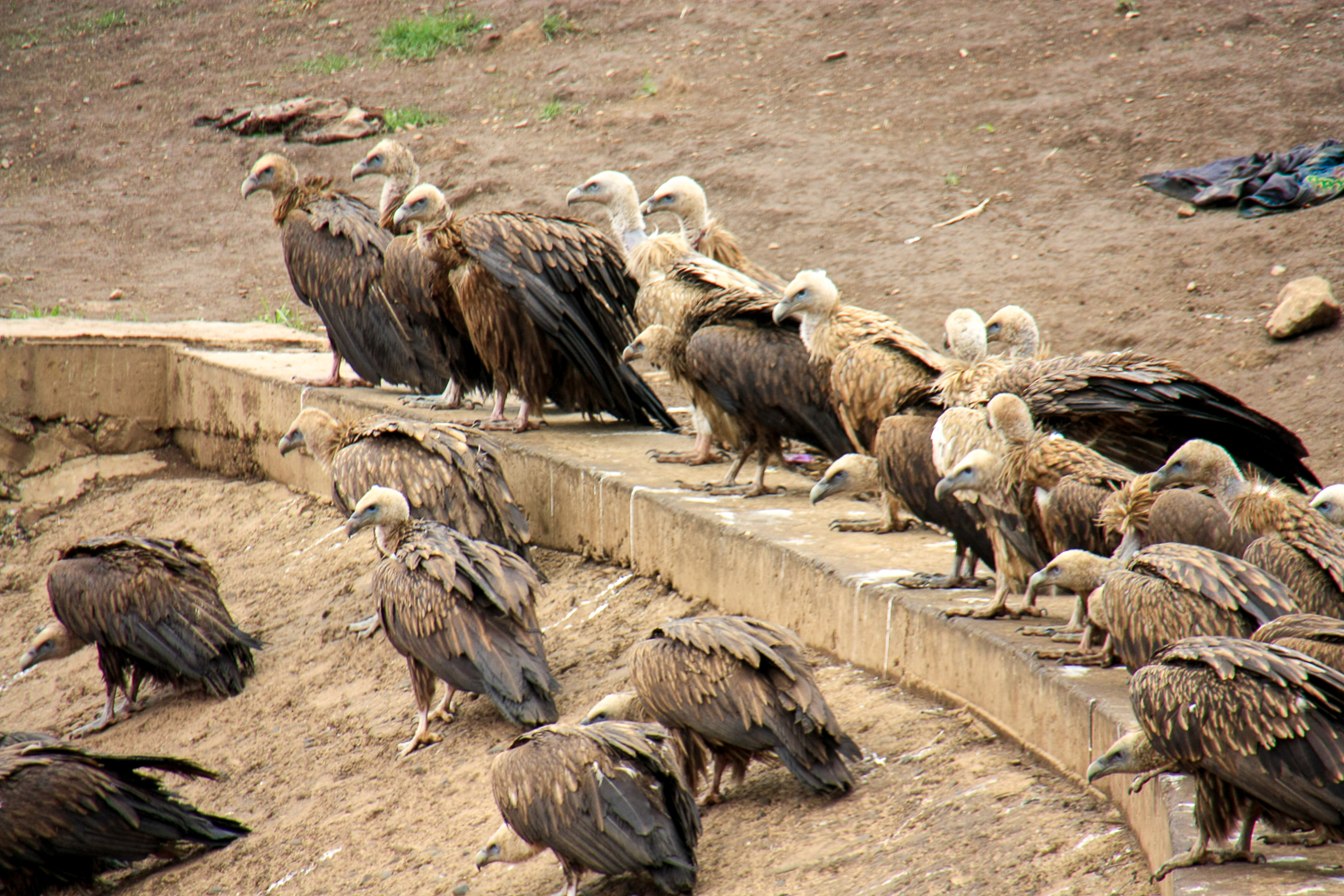 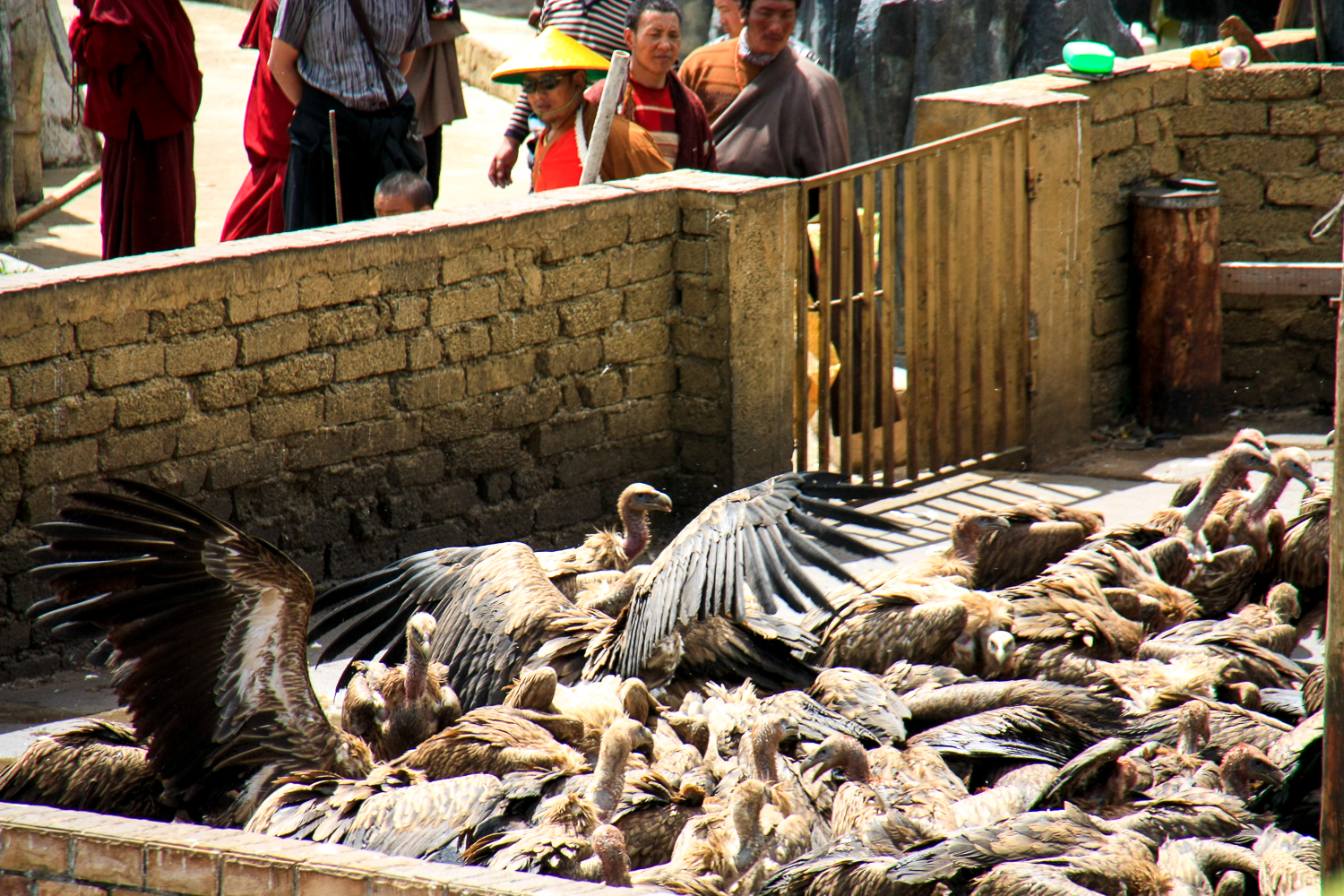 The notion of a sky burial is romantic: once a person dies and the soul has already departed, the birds will bring them up to the sky, while the giving of the body as provision to so many living things is seen as a final act of generosity. (In more practical concerns, cremation isn’t possible due to the scarcity of kindling, and ground burial is seen as an insult where you’re pushing a body into hell.) The absolute stoicness of the Tibetan families in the knowledge, sound, and even sight of this ritual is a shocking but a very different perspective on death: the person isn’t there anymore. Contrast this to me and the rest of the Han audience, situated 100m away: trying not to cringe.

So back to the monasteries: what’s going on? China is forcing the demolition of many homes in both monasteries, an order passed in June to be completed by the end of this year. Why? The reasons vary: fire safety, overcrowding… okay, that sounds innocent enough. But — since no one’s willing to talk, and even locals in Garzê aren’t sure what’s going on — I’m learning on the Internet that membership numbers must be reduced to 5000 — current membership is “officially” somewhere around 10000, but some people put it at up to 40000, so this is a drastic reduction. That’s pretty suspicious, especially accompanied by directives that students must sign pledges to “practice religion in accordance with the law”, as if they weren’t doing so already, and that the number of Buddhist institutions and students must not exceed a certain number — so where would prospective students go? And this has happened before, too, before the eyes of the world. There’s apparently going to be a limit on non-Tibetan (Han) students or students from out of province, too. Government, paranoid much?

All of this is already happening right now, but if I hadn’t read up or run into foreigners unable to visit Sertar, I wouldn’t have known — it must be starting from the far reaches, away from the many eyes of tourism. I doubt any of the domestic tourists know either. And of course, the monks and nuns aren’t talking.

This place is in danger. I don’t know if there’ll be a next time to visit. And while Tibetan Kham areas of Sichuan have largely been free from the heavy hand of the Chinese government compared to their neighbours in Tibet province, is it going to last?