I made one last sidetrip from Kashgar before leaving China. Again, it didn’t feel like China. But it didn’t carry at all the Uyghur character of Kashgar either — this is Kyrgyz land.

Karakul means “black lake” in a variety of Turkic languages, and there are multiple places carrying that name in Central Asia. The one in China (Kalakuli Lake 喀拉庫勒湖) is within a Kyrgyz (Ji’erjisi 吉爾吉斯/Ke’erkezi 柯爾克孜) autonomous prefecture, and it’s got two very small settlements around it.

Taking a shared car heading for Tashkurgan, a town in the neighbouring Tajik autonomous prefecture and along the China-Pakistan Karakoram Highway (whew, all these different groups), we passed the gorgeous and touristy White Sand Lake 白沙湖 before I hopped off at Karakul. But the weather quickly turned — we weren’t in the desert lowlands anymore, but rather at an altitude of 3800 m, in the Pamir Mountains. Things were fine at White Sand Lake, and only a mere 35 km down the road… uh oh. 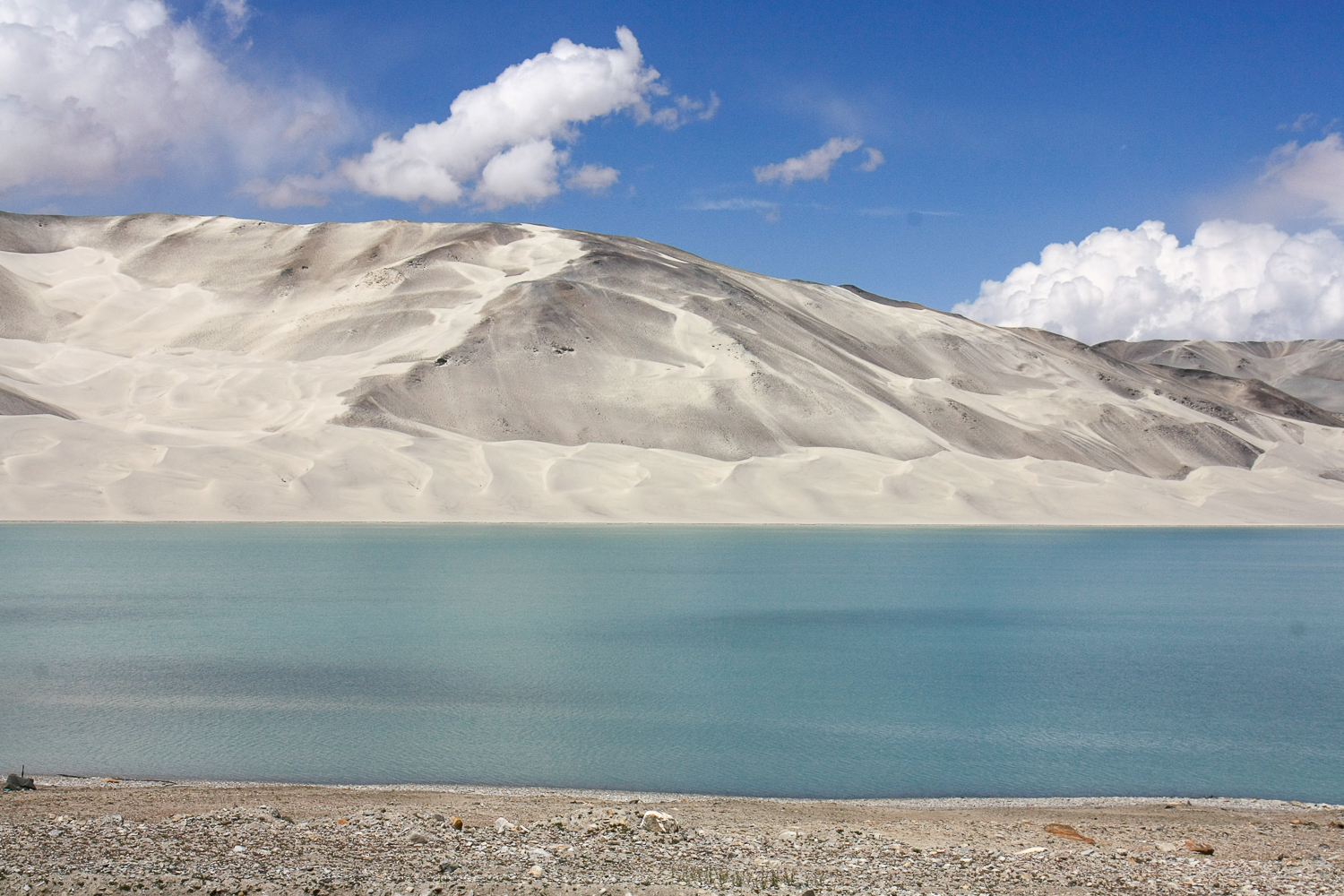 As soon as I got out of the car, it began to snow. (It’s hard to believe that just a week ago, I was roasting in over-40 degree weather in Turpan, in the same province!) I was immediately approached by a local Kyrgyz boy, Marambiek, who offered for me to stay in his family’s yurt for the night for the piddly sum of 20 yuan ($3), plus a little more for food. I hopped on his motorbike, and off we went. His mother welcomed us in, and we all immediately huddled around the stove, as she provided bundles of cushions and blankets to sit on while she prepared some butter tea. Judging by the lack of surprise from her reaction, they must host strangers frequently! 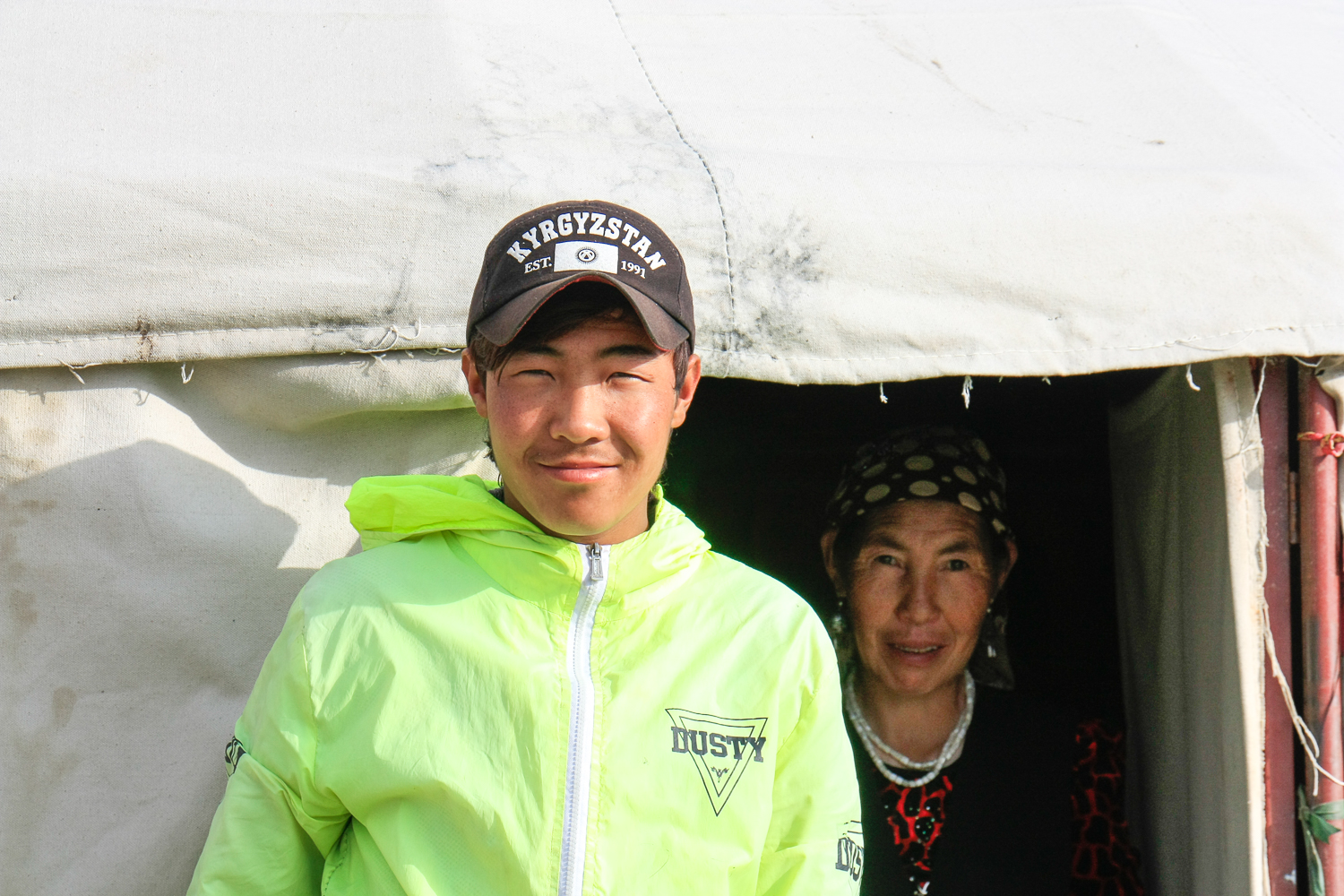 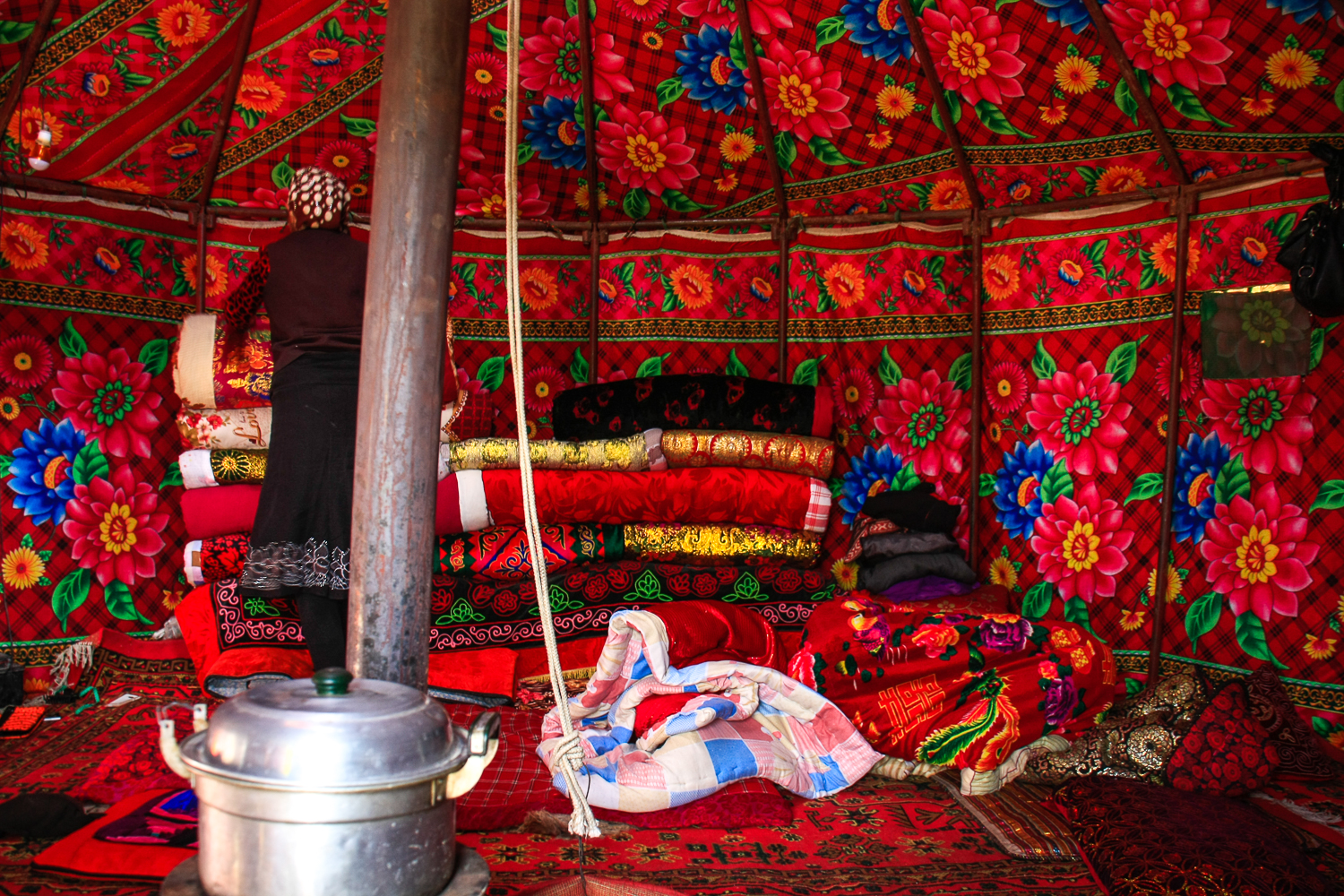 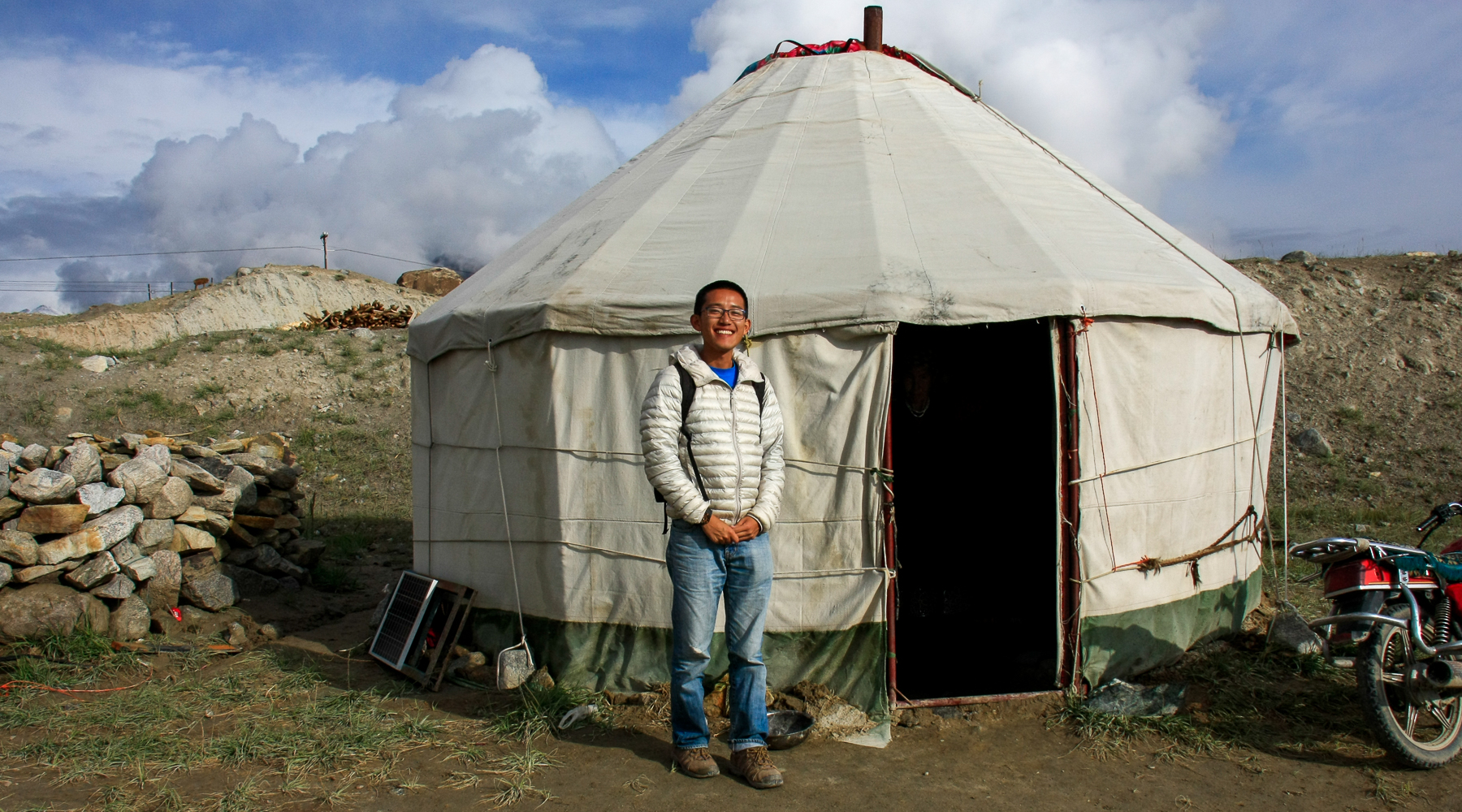 After the short snowstorm passed, Marambiek offered to take me up to the glacier on nearby Muztagh Ata (7546m!) on his motorbike. Initially exhilarating, I began to have a twinge of regret as the weather quickly turned again — though thankfully, his mother had the foresight to lend me one of Marambiek’s jackets to wear over my own. As rain turned into snow and sleet, and the winds picked up, both us of were freezing, especially without gloves. When we reached the admission gate, Marambiek’s luck turned from bad to worse as he slipped off the brake and we crashed into a wall, leaving a noticable hole! If you guys ever visit the park and see an indentation suspiciously repaired with mud… that was us. (We stayed one hour, with him leaving me in a nearby stranger’s yurt and insisting that I warm up while he fixed the mess. Aww.) Luckily, neither of us were hurt, nor did his motorcycle sustain any damage. 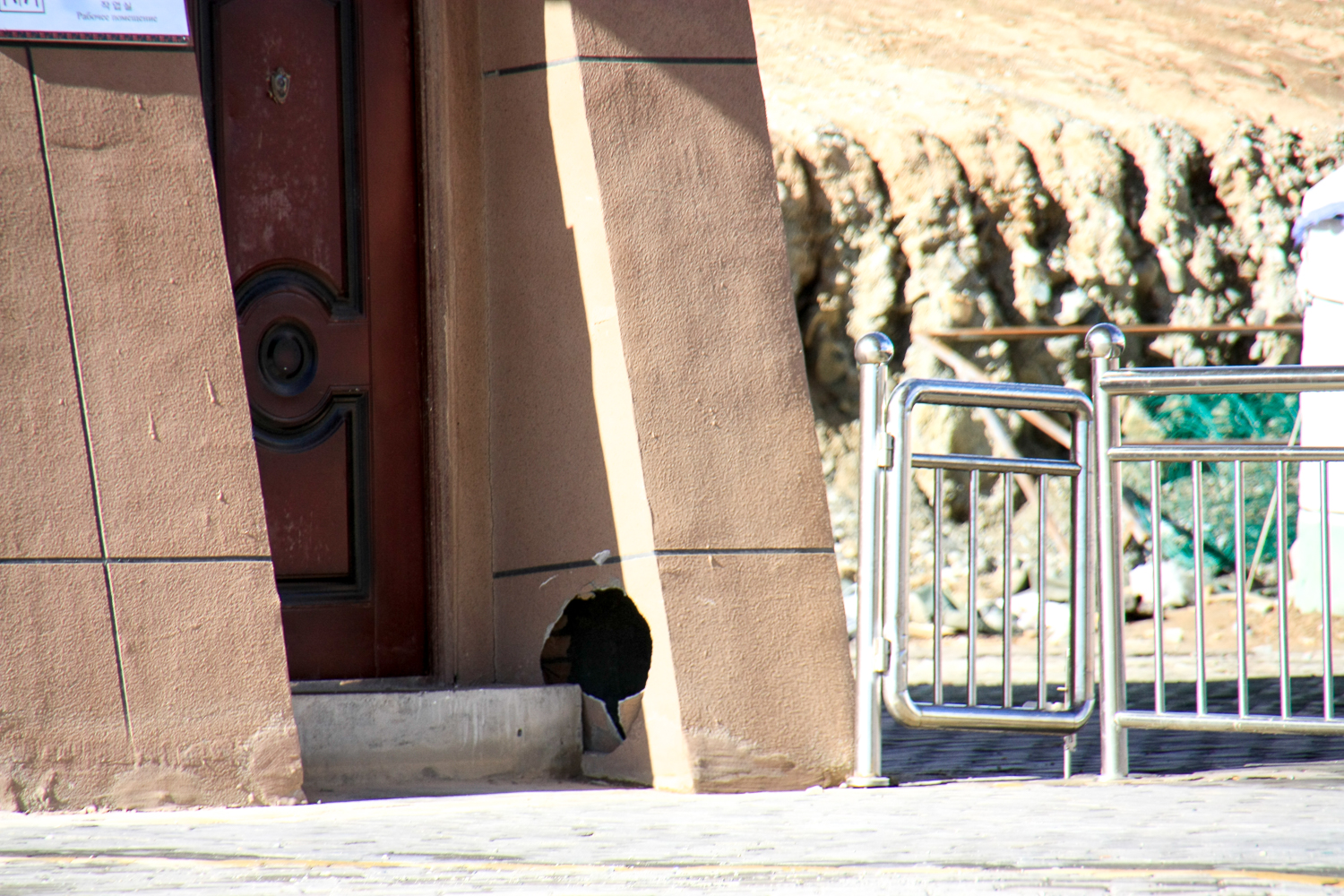 Unfortunately, his motorcycle decided it was time to struggle, at times refusing to start without a little jog and push. Running into two of his friends who happened to be around, he swapped me onto one of their bikes, while all three of them (young teenagers, I should add) lit copious amounts of cigarettes as we zipped along. With the freezing weather, I don’t blame them. We had a couple brief clearings with sun, and the vapour coming off the ground made for a majestic view. 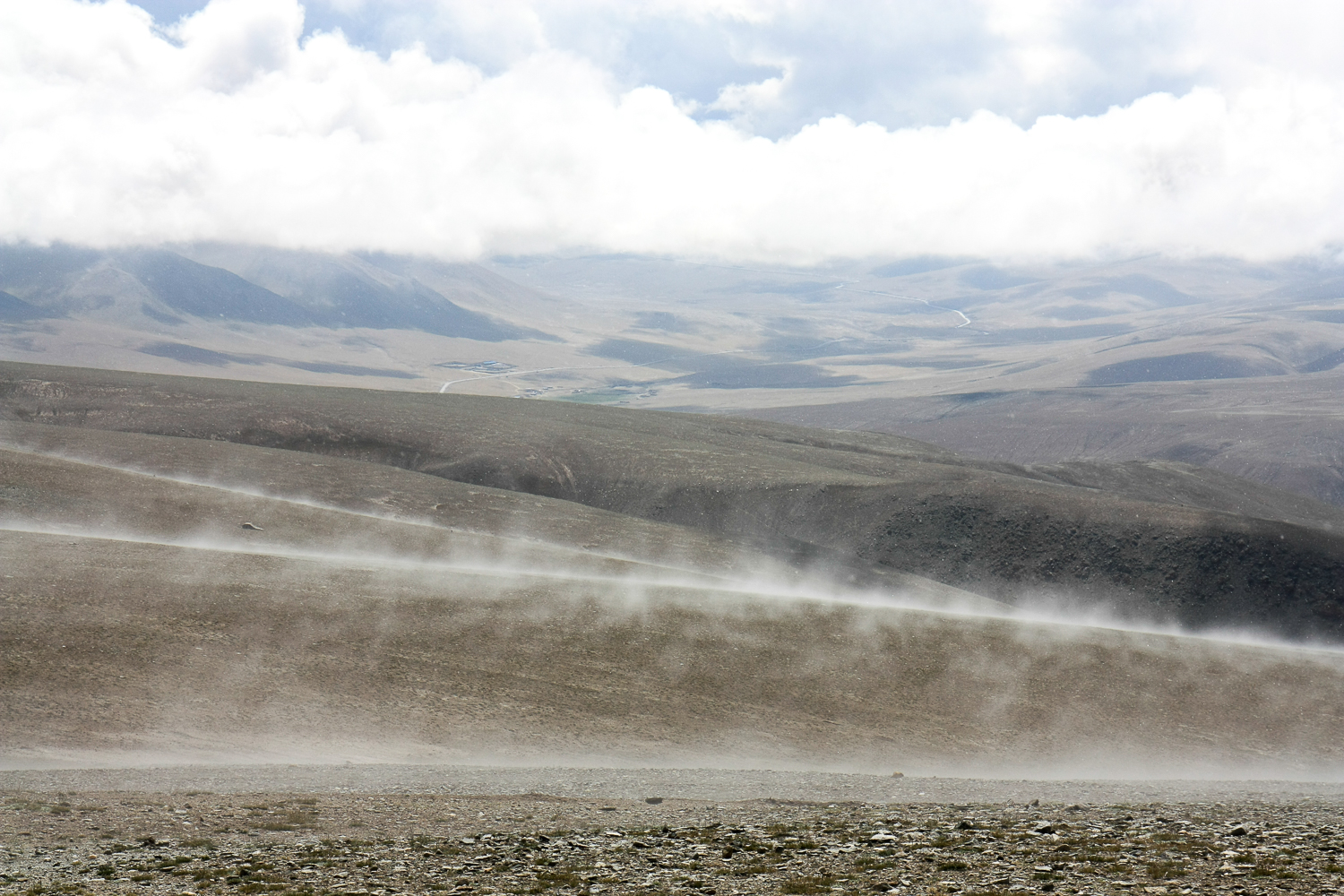 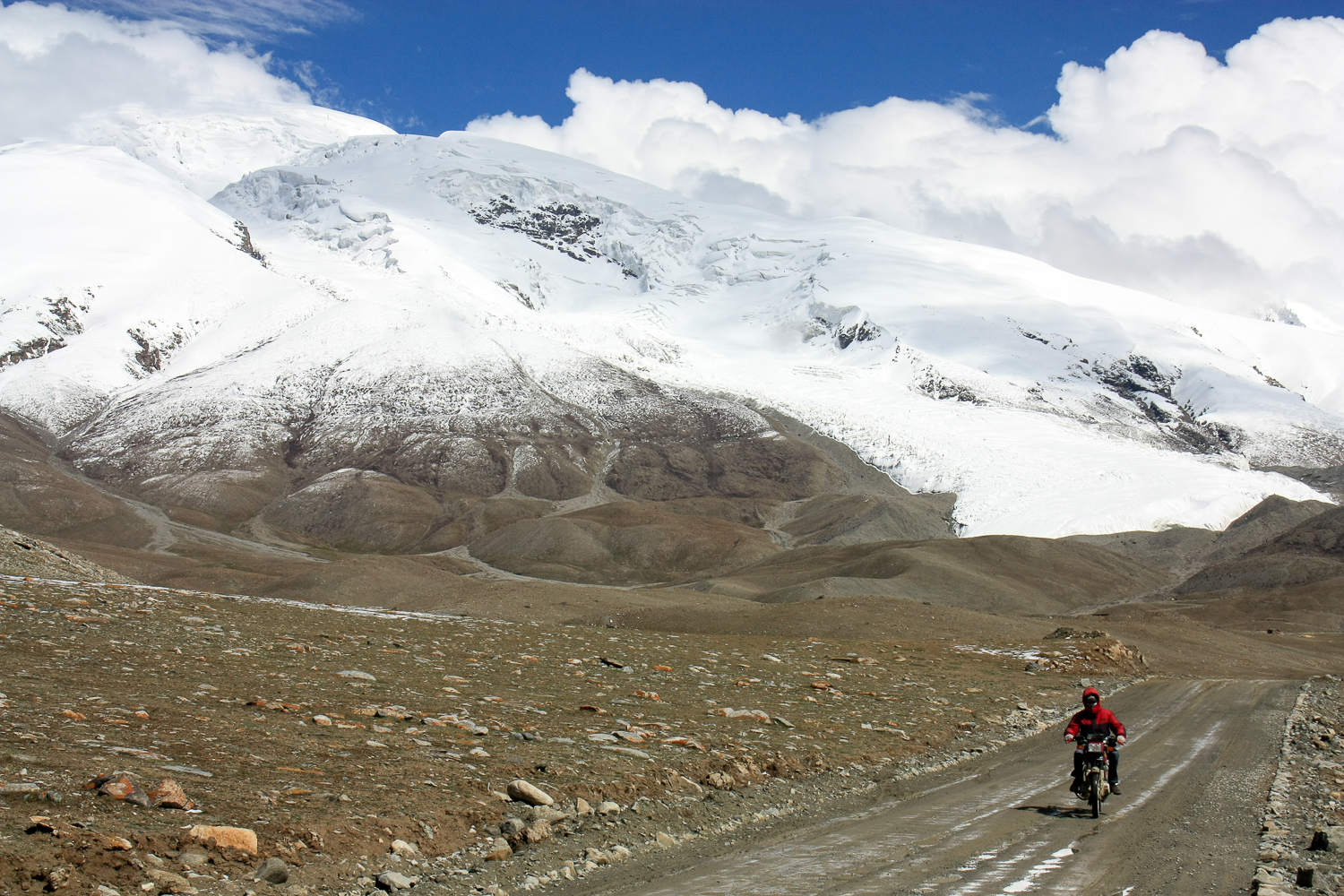 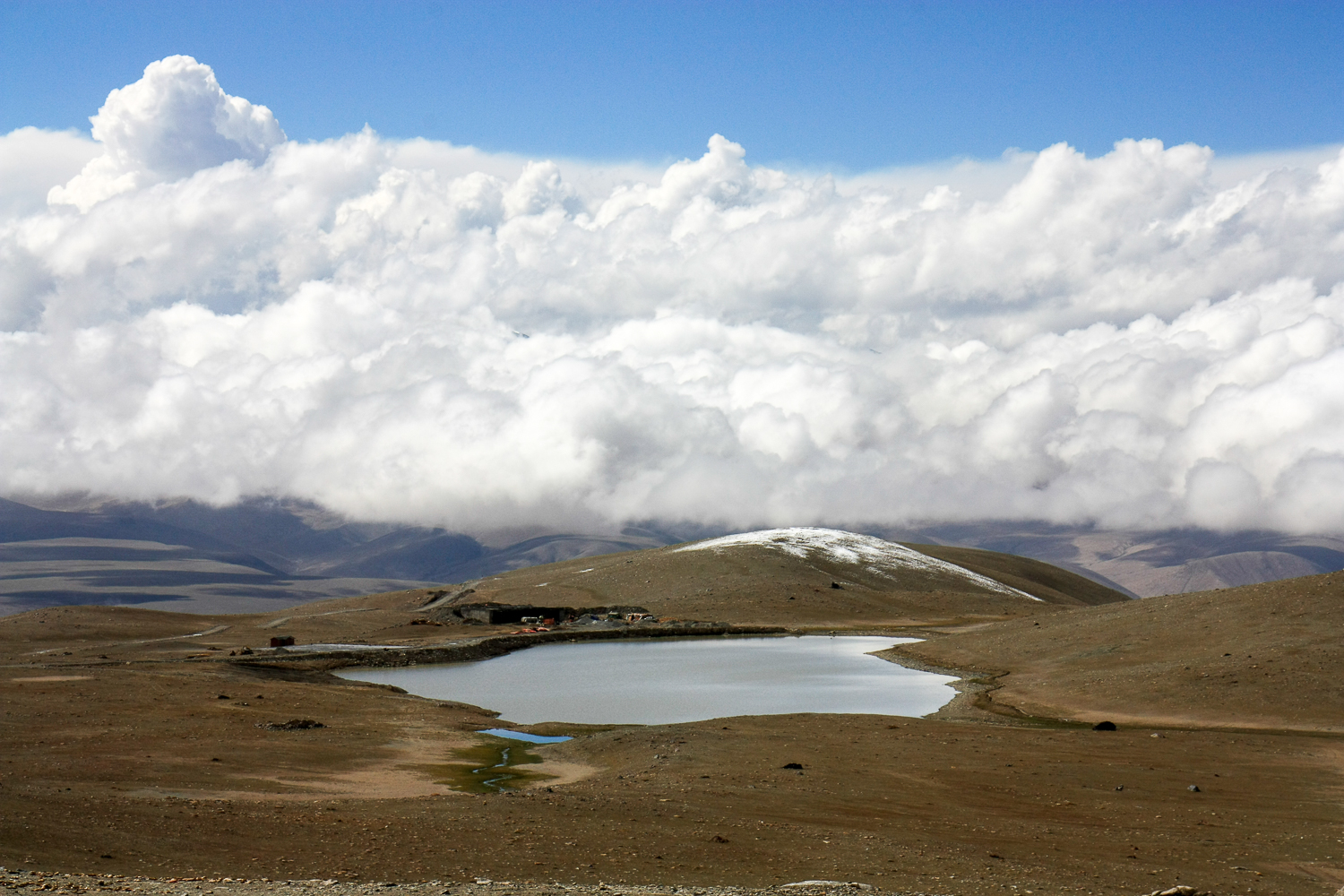 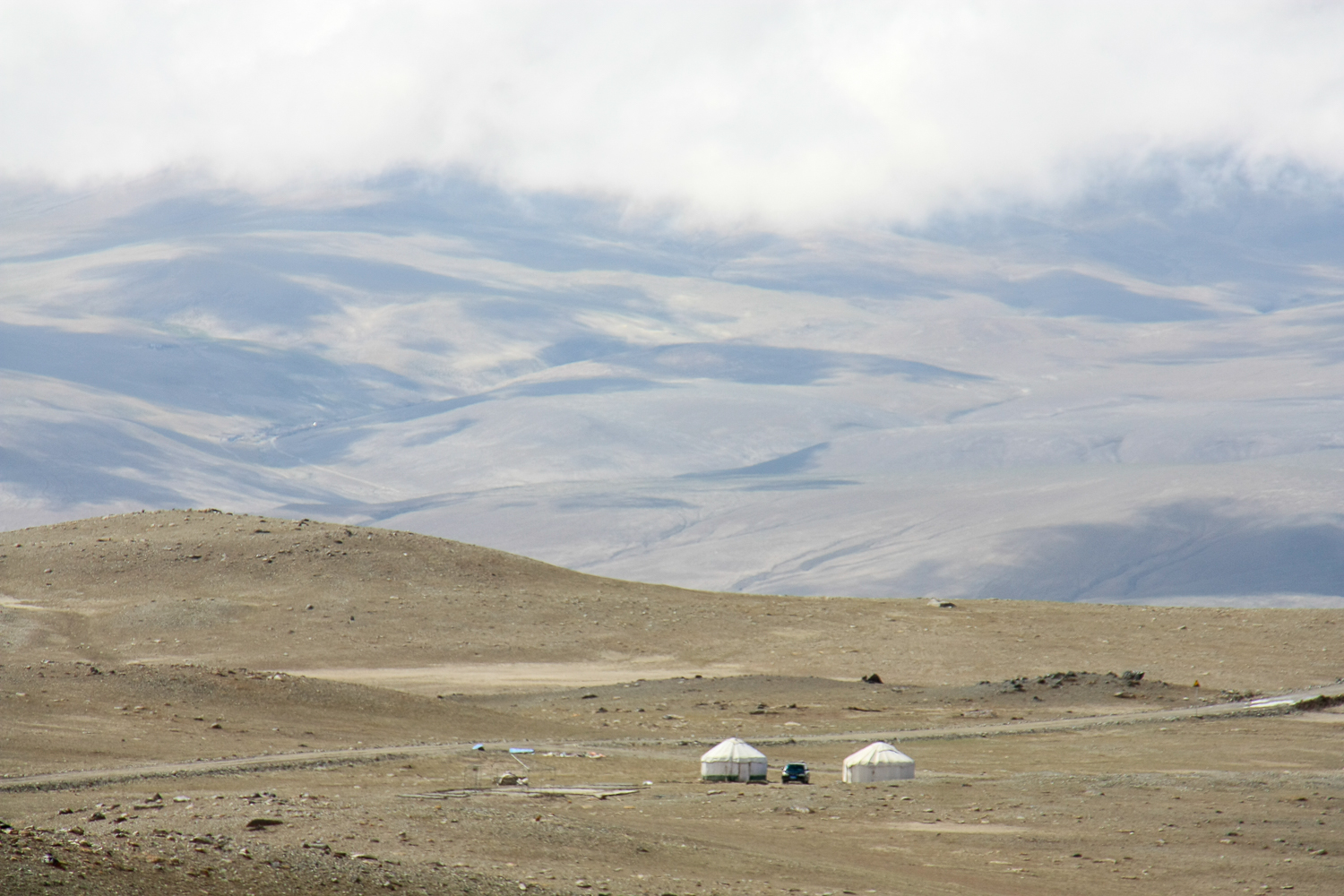 The glacier itself was located roughly 1.5 km uphill from the end of the road — not a terribly long distance, but one made harder due to the altitude! All of a sudden, the giant glacier appeared around a corner, and we stayed to admire and walk around some of its crevasses… for a mere five minutes, as the weather turned yet again and it was too cold to remain. 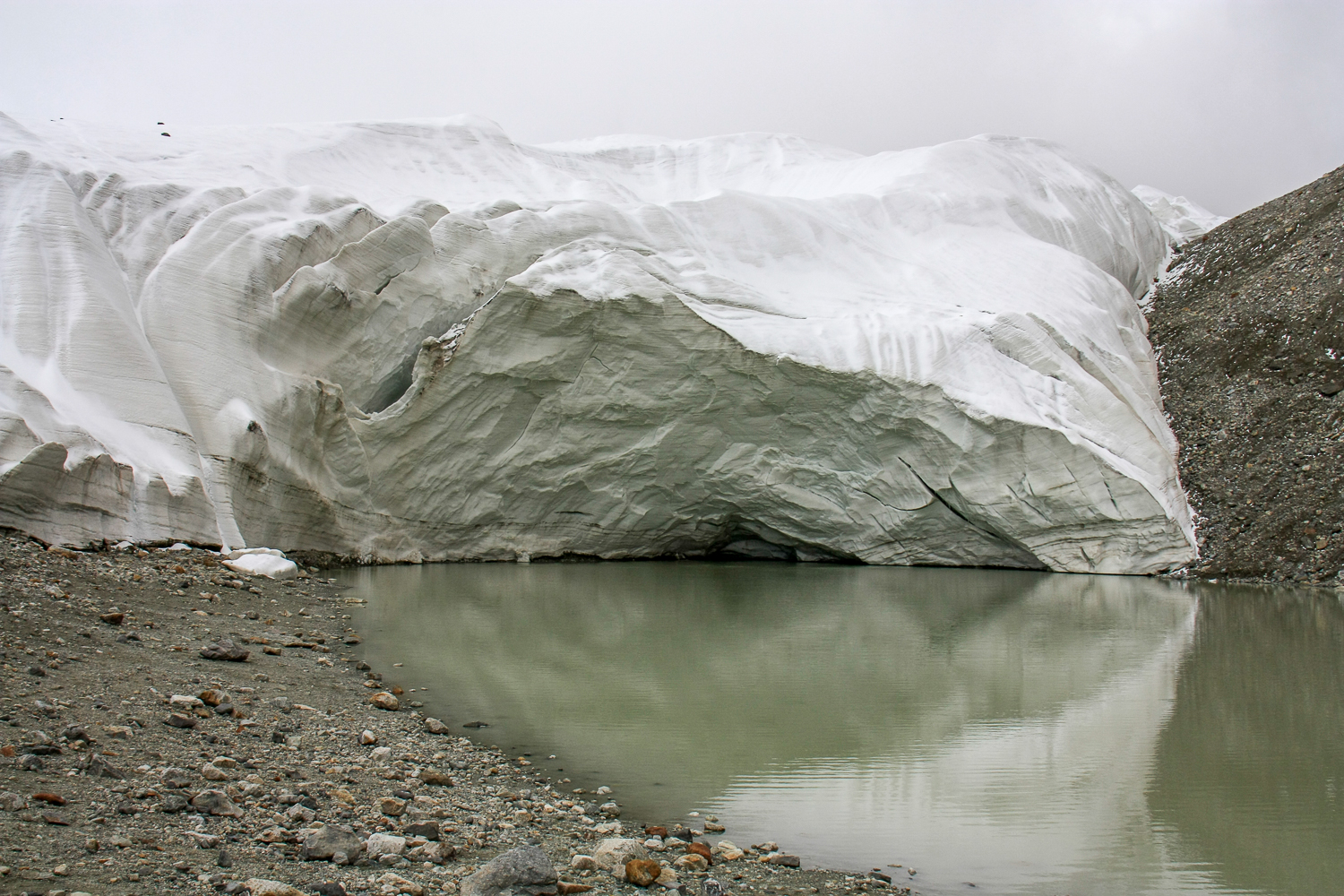 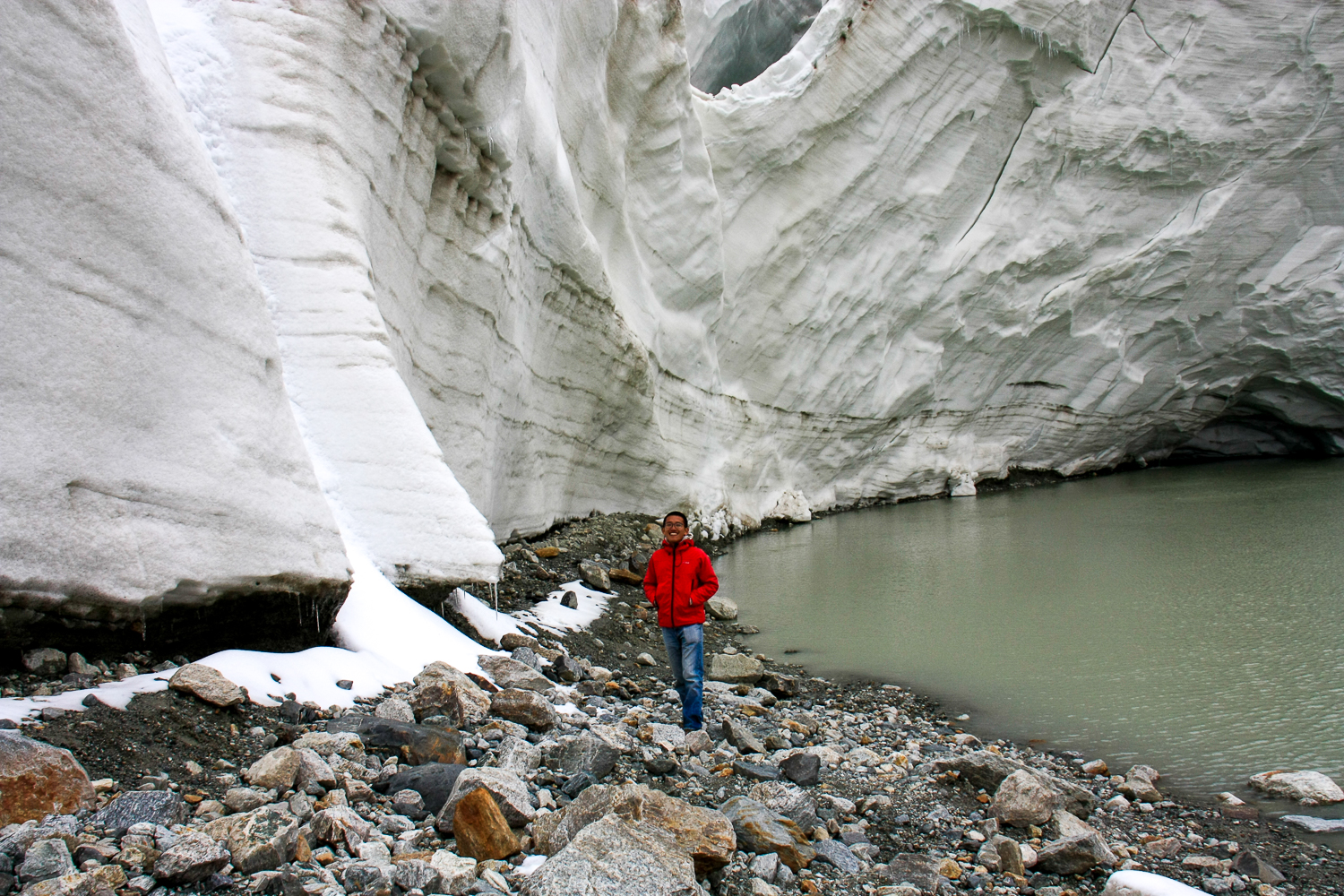 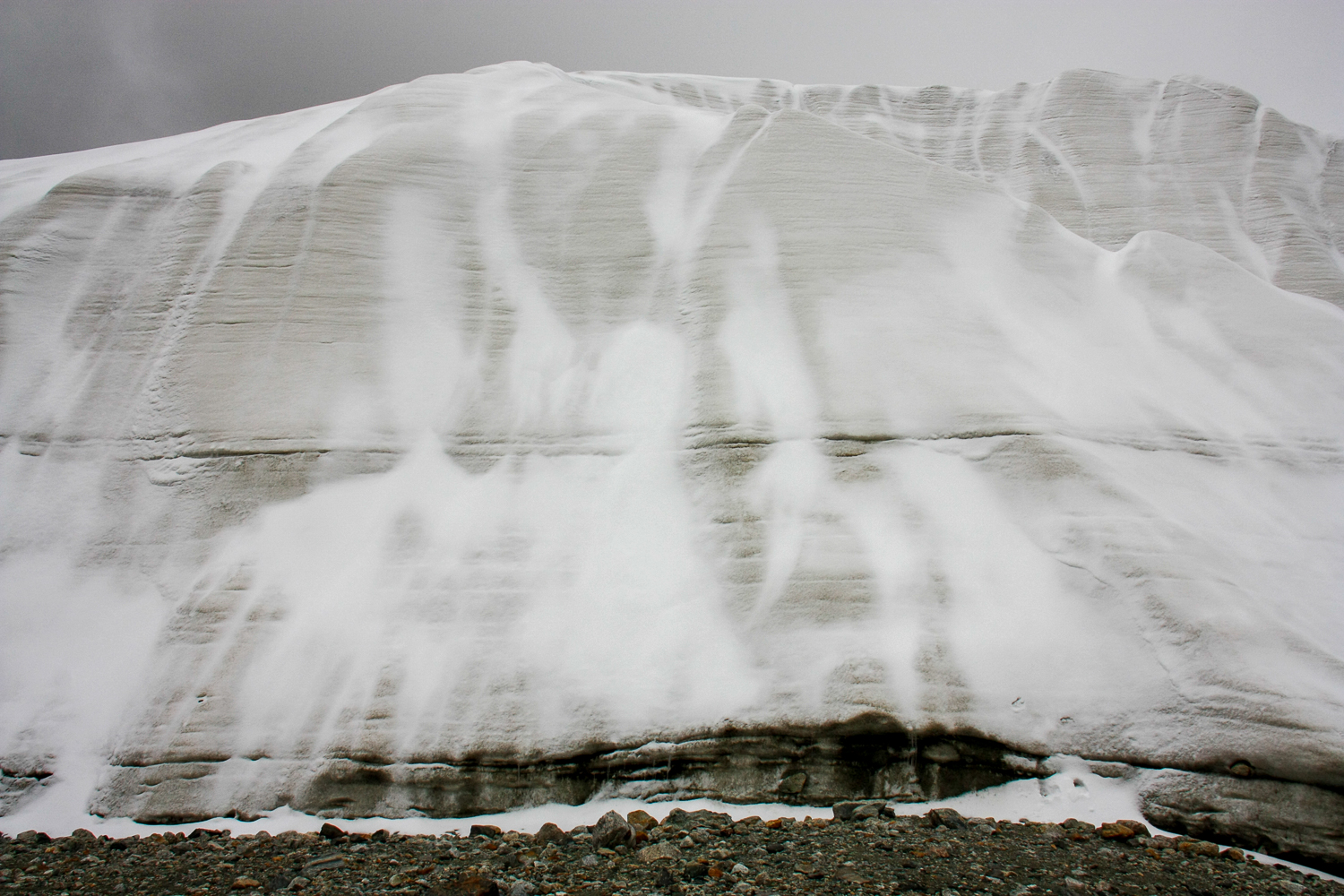 We had a very, very cold and long ride back down to Karakul, though we also made extended stops to further repair the hole at the gate, to buy a lightbulb and wire for the yurt in the village where Marambiek’s family spends the winter, and to fetch some bread and lamb from his grandparents’ home in between the village and the yurt settlement. By the time we made it back to the yurt, we had minutes to spare for the sunset, with the clouds finally clearing and the sun creating a beautiful orange glow on the peak of Muztagh. It was my one, brief opportunity to see Karakul for what brings it fame: the ultra-clear reflection of the incredibly large, looming Muztagh Ata in the black waters. 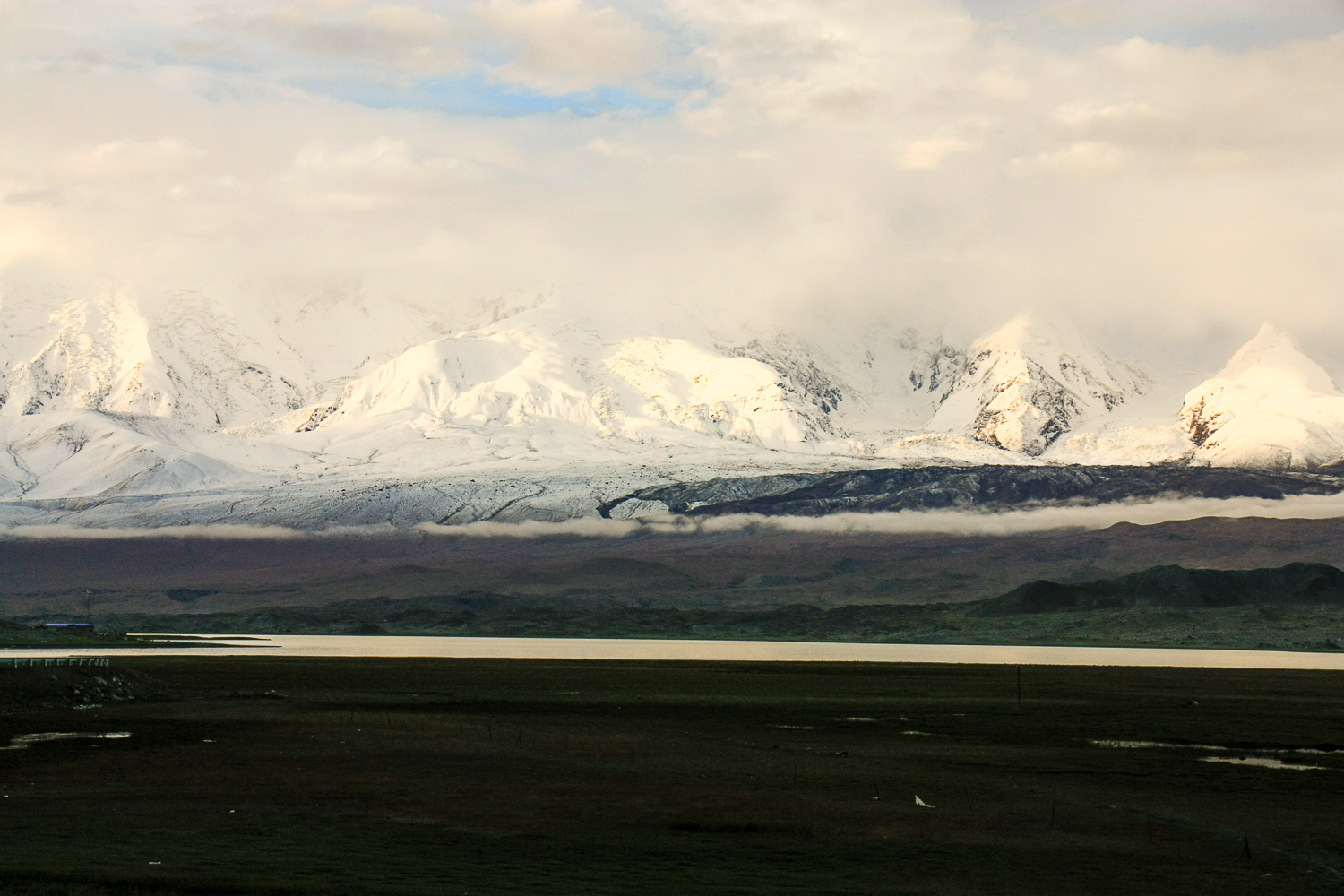 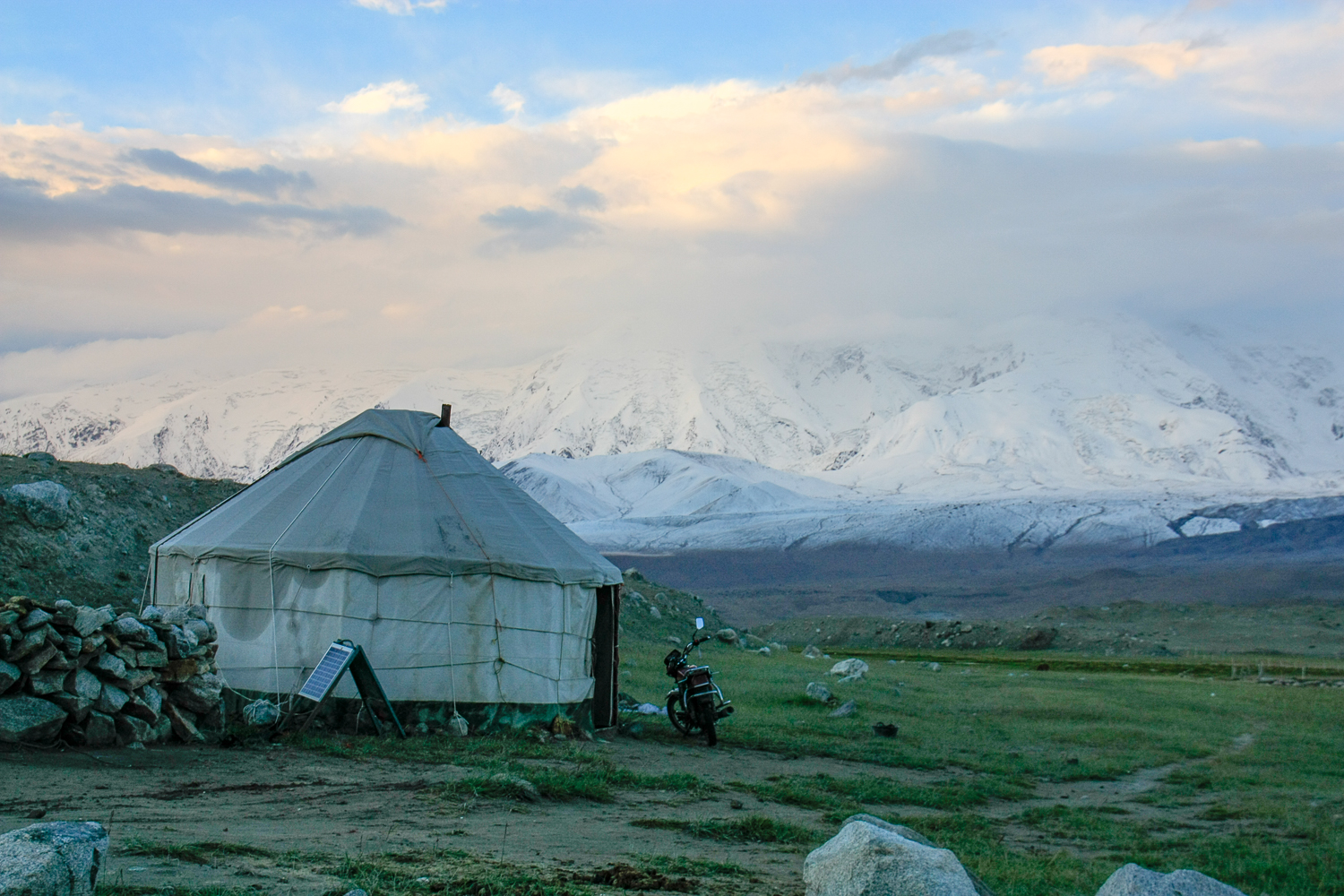 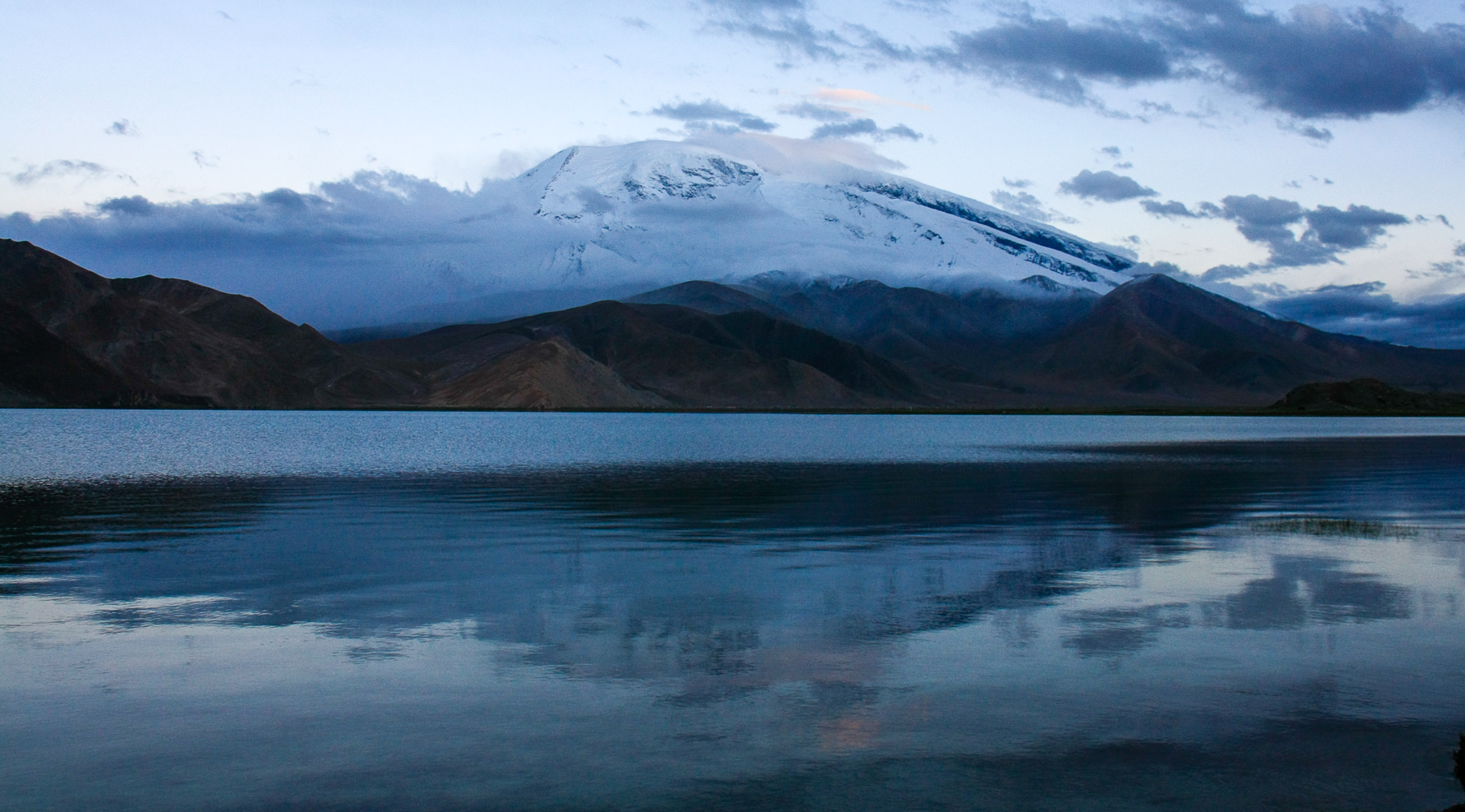 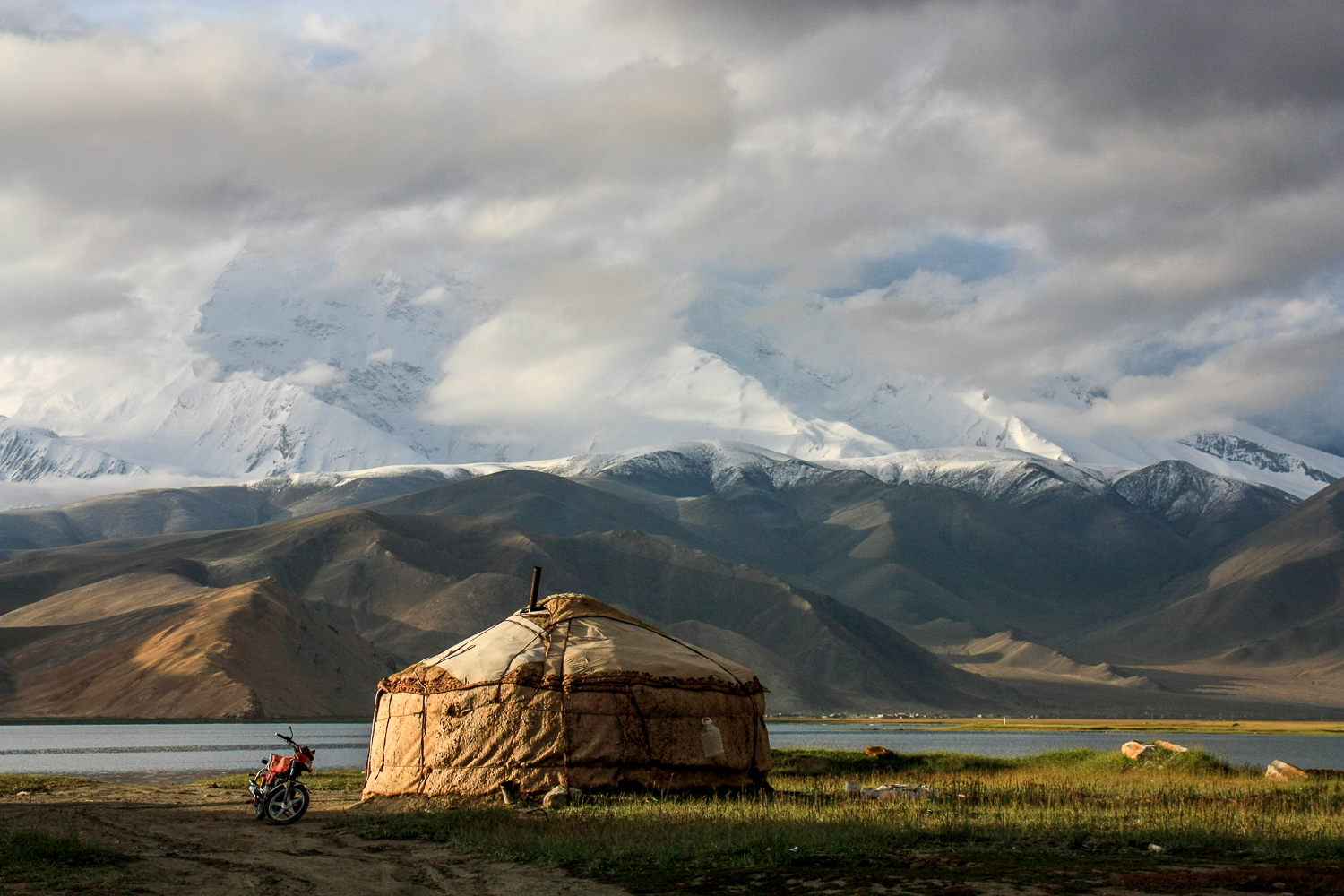 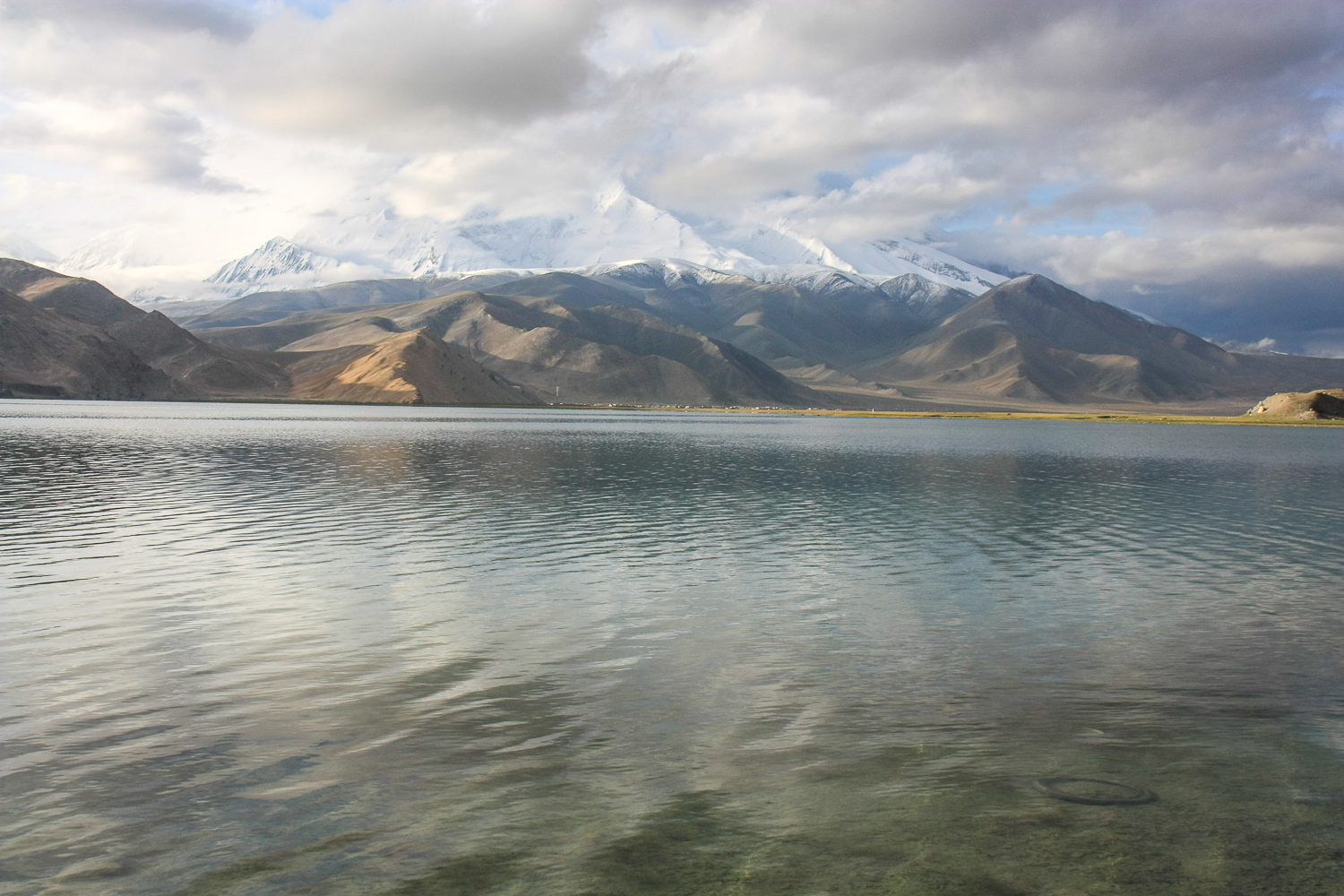 Running quickly back into the yurt as it got cold again as soon as the sun set, spending the night with Marambiek and his mother was quite fun! While he speaks Mandarin, though heavily accented, his mother only speaks Kyrgyz, and so communication was often through him. His four siblings and father live in another larger yurt over the nearby hill, with better grazing grounds for their flock; he and his mother live together and host guests in their yurt. As for Marambiek’s future, he’s got two more years left of secondary school — then it’s back to herding sheep. He seems quite happy about that… though not the fact that school begins its September-December session again soon! (They break again for winter, then have a second session from April to July.) Over a wonderful dinner of lamb stew on rice and butter tea, he scrolled thorugh a bunch of photos, videos, and movies on his phone, then spent about an hour trying to learn guitar from me. Though I’ve studied music and know what sounds good or not, I don’t even play guitar! His poor mother had to suffer through some pretty terrible “music”… Actually, I wonder what she does for entertainment all day. 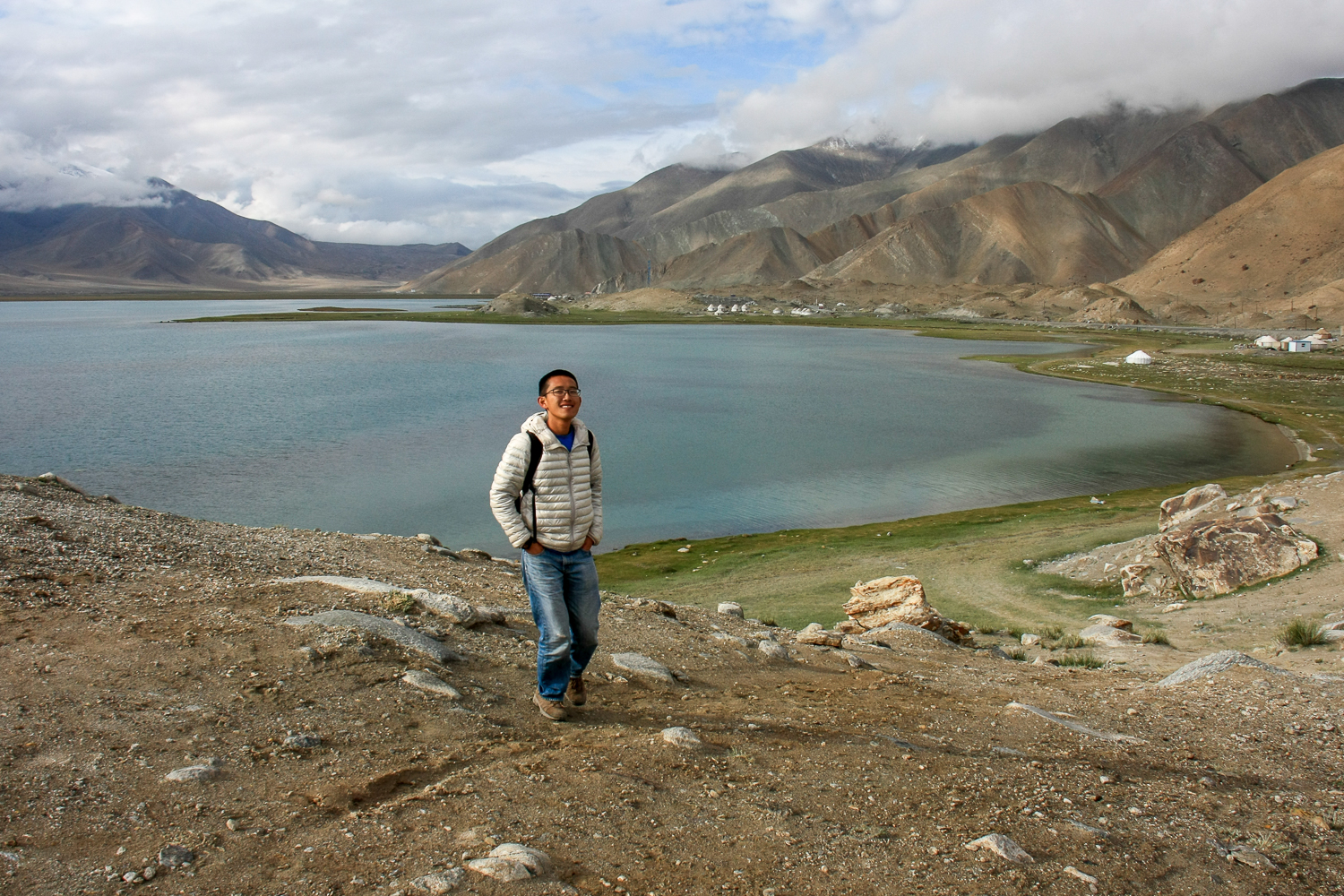 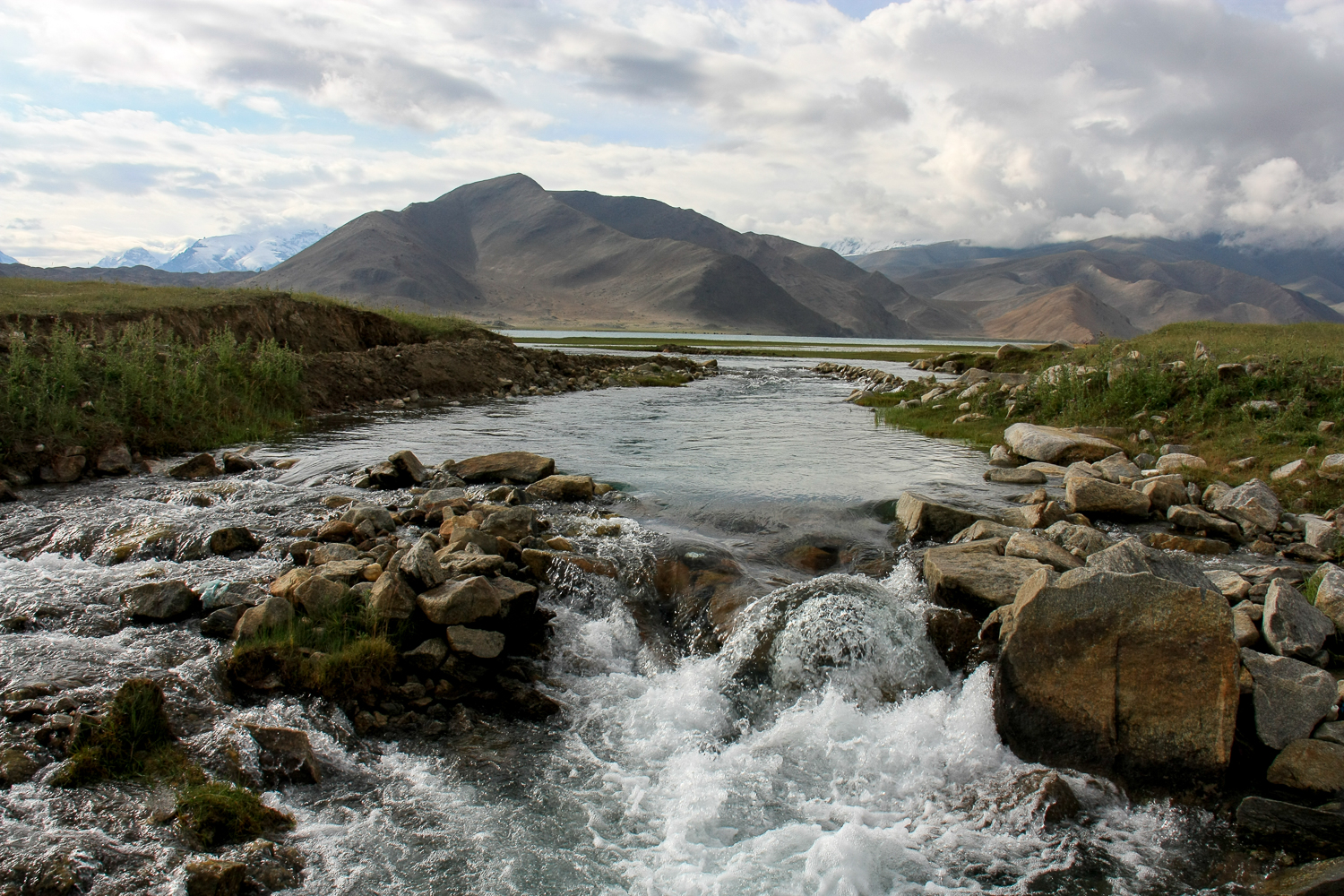 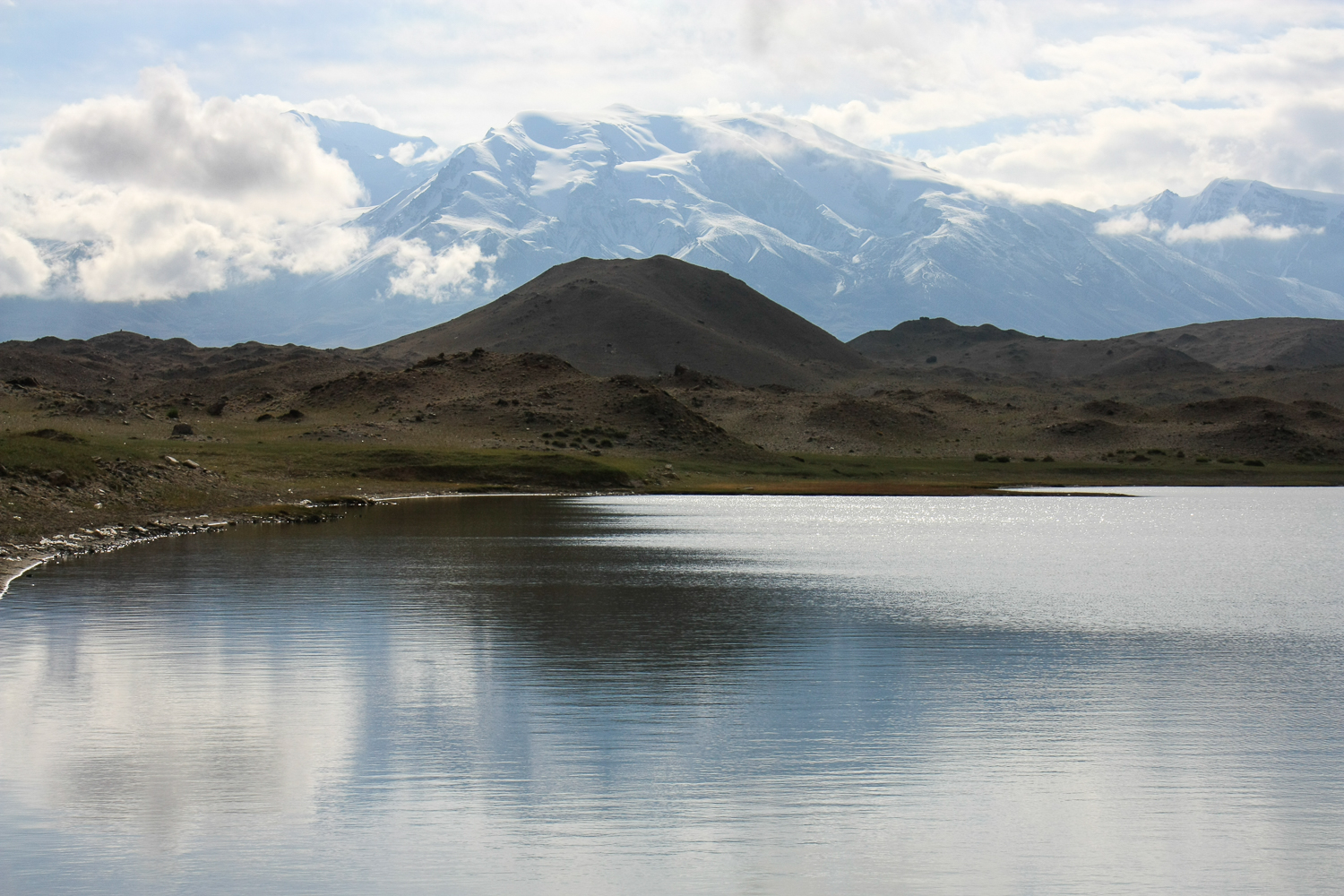 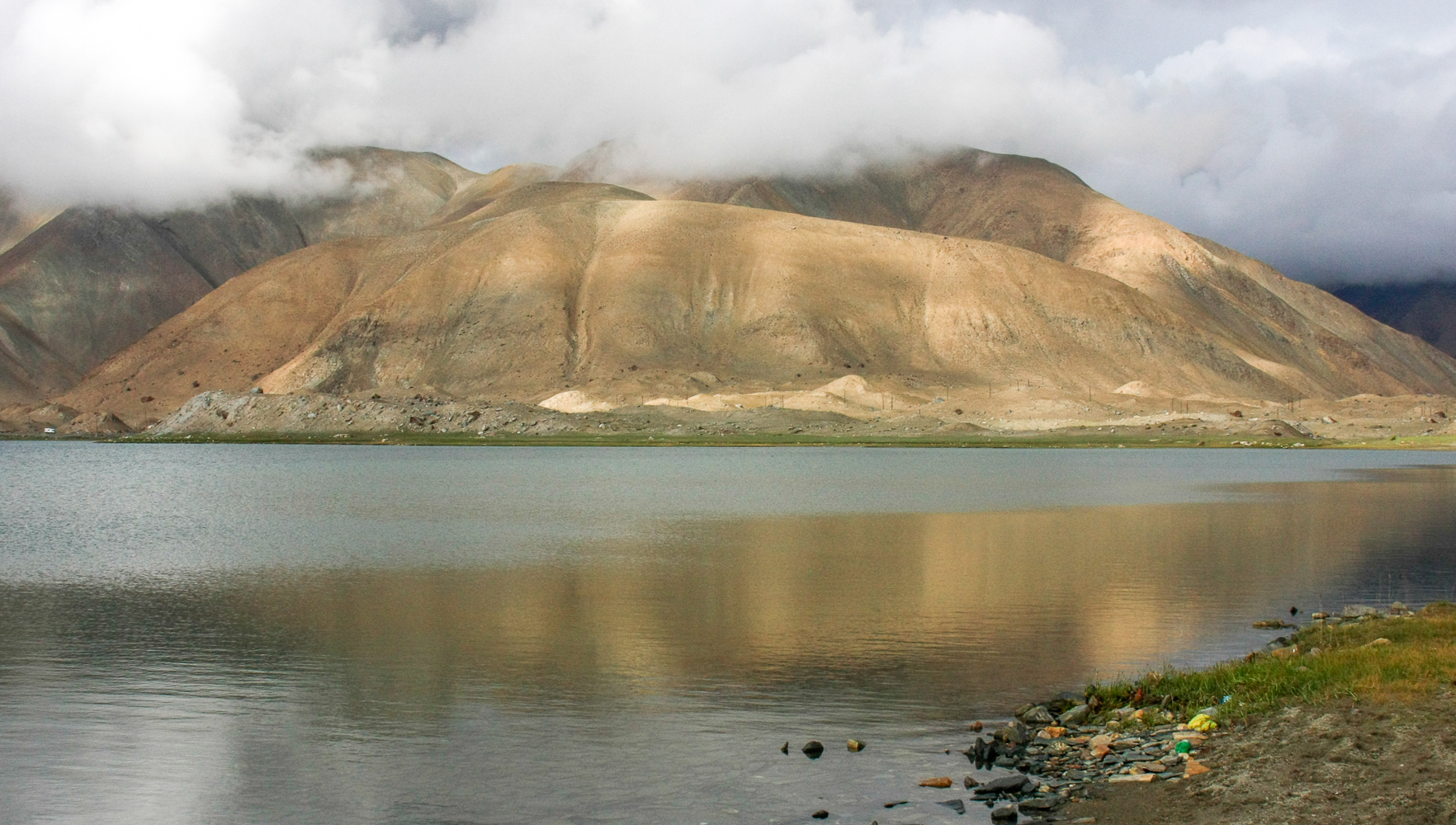 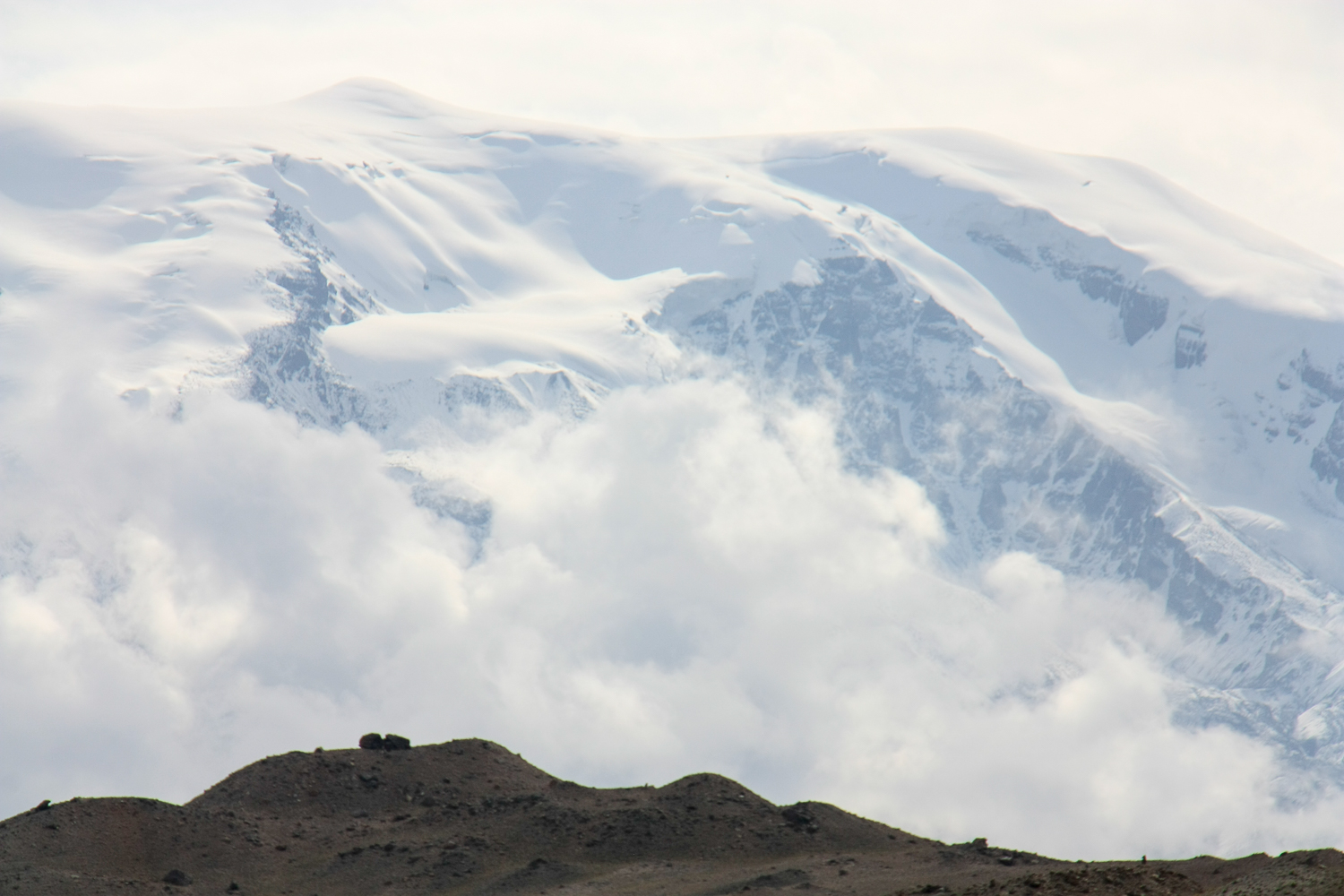 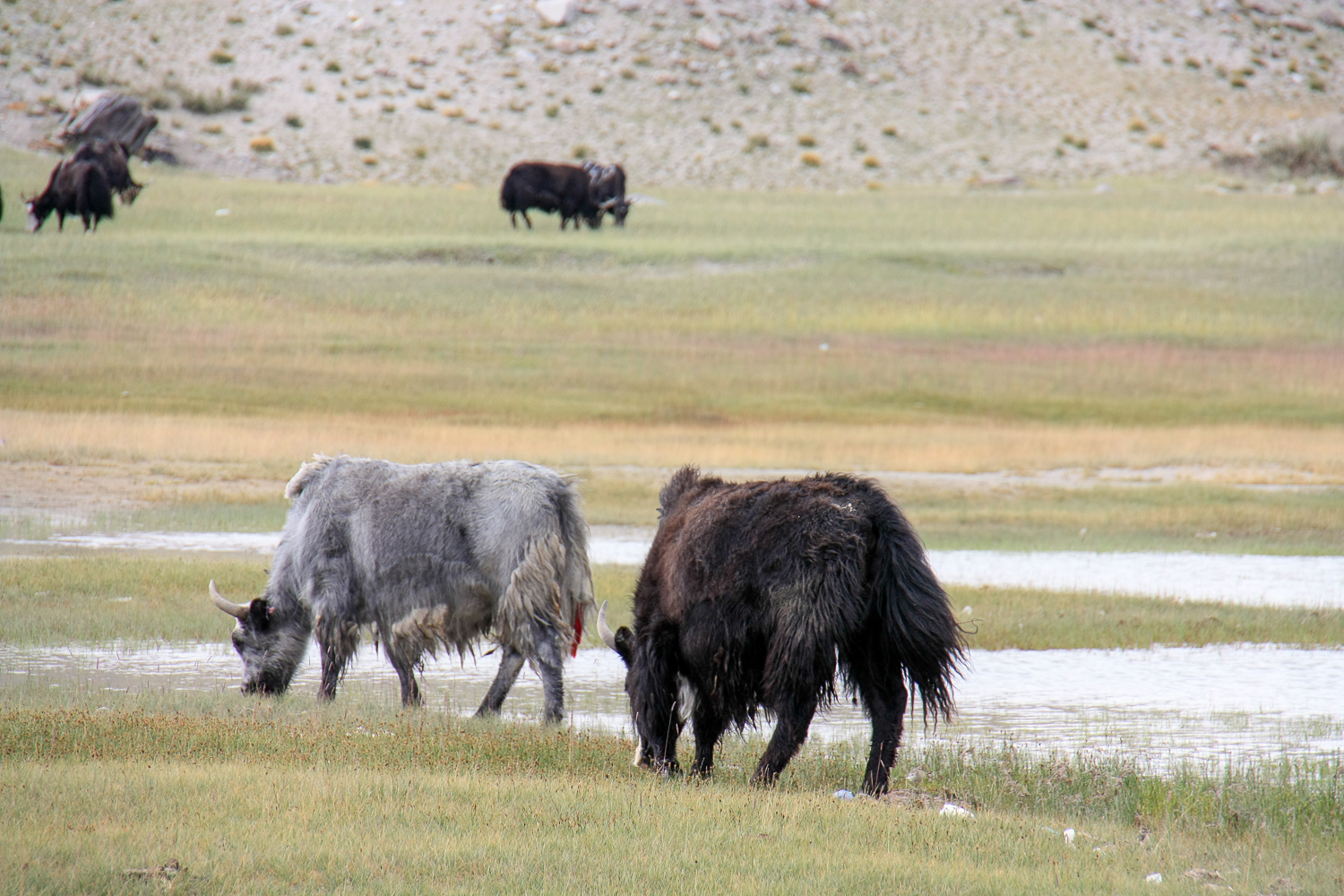 Waking up as the sun shone through the yurt’s cracks, I bid the two of them goodbye, taking in the views of Karakul, Muztagh, and Kongur (the peak behind the yurt) one last time while the clouds rolled in, and managed to hitch a ride back to Kashgar a mere two minutes after waiting by the road — and a whole thirty seconds before it started snowing again. 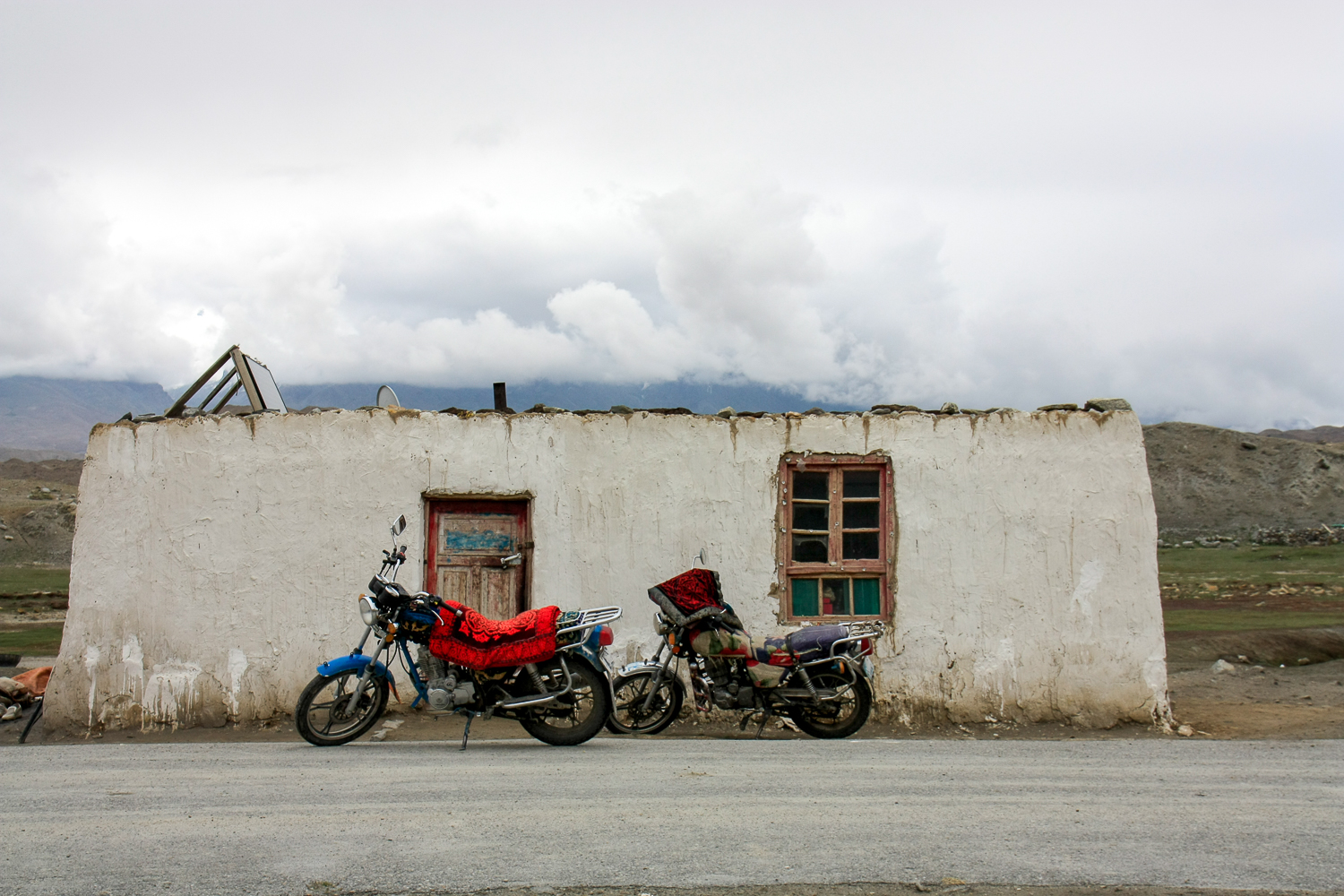