Fresh from a speedy, comfortable overnight train ride from Karaganda, Almaty and its walkable, leafy streets, convenient buses, and relatively new metro felt a lot like a detour into my comfort zone: this is easily my favourite city of the trip, and a place I definitely wouldn’t mind living in. Unfortunately, having to deal with visa bureaucracy for the next parts of my route cut short my time here, but I tried to make the most of it.

More than any other place in Central Asia, Almaty feels positively European. The crowd is international. The city is laid out like a grid. Cafes and restaurants of all price ranges and cuisines line the streets. Signs in English make a slightly more frequent appearance. The bazaar is organised like a giant, clean supermarket, though it’s definitely still a bazaar, selling some eye-catching foods (including an entire horse meat aisle) without the typical chaos. There’s even a pedestrianised street lined with juice stalls, ice cream carts, souvenir sellers, musicians, artists, and restaurants. Rather than visit any museums, having visited enough in Astana and Karaganda, I chose to just soak in the atmosphere. (And of course, splurge on some wonderful meals!) 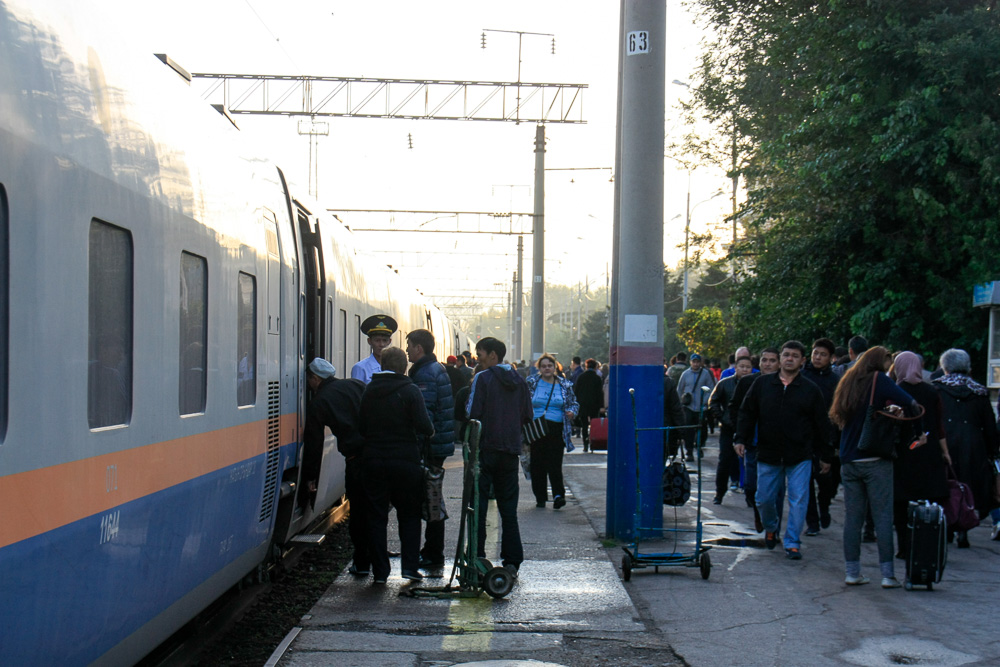 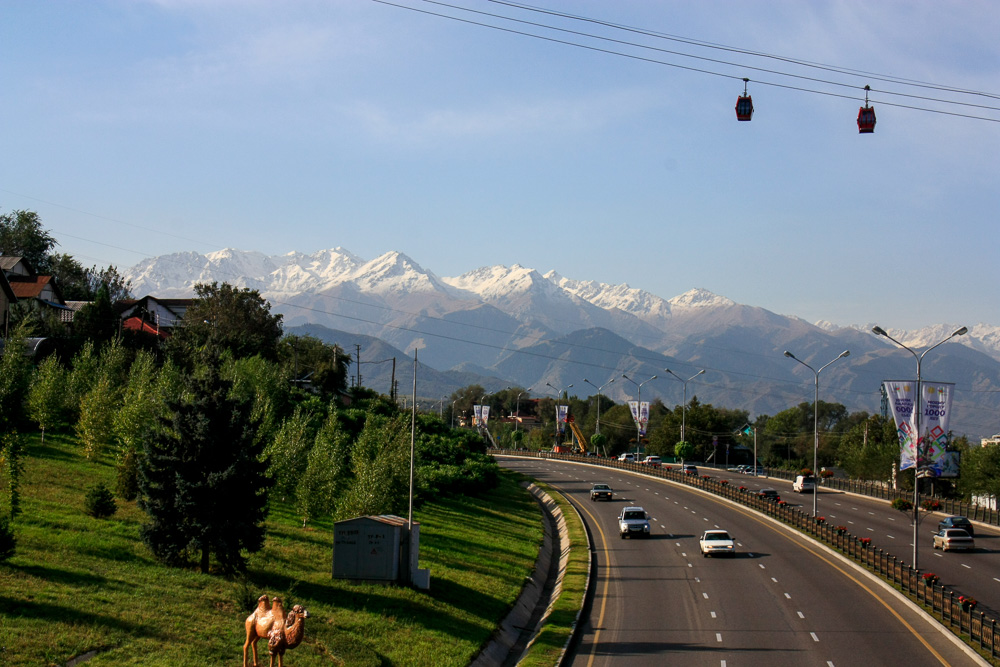 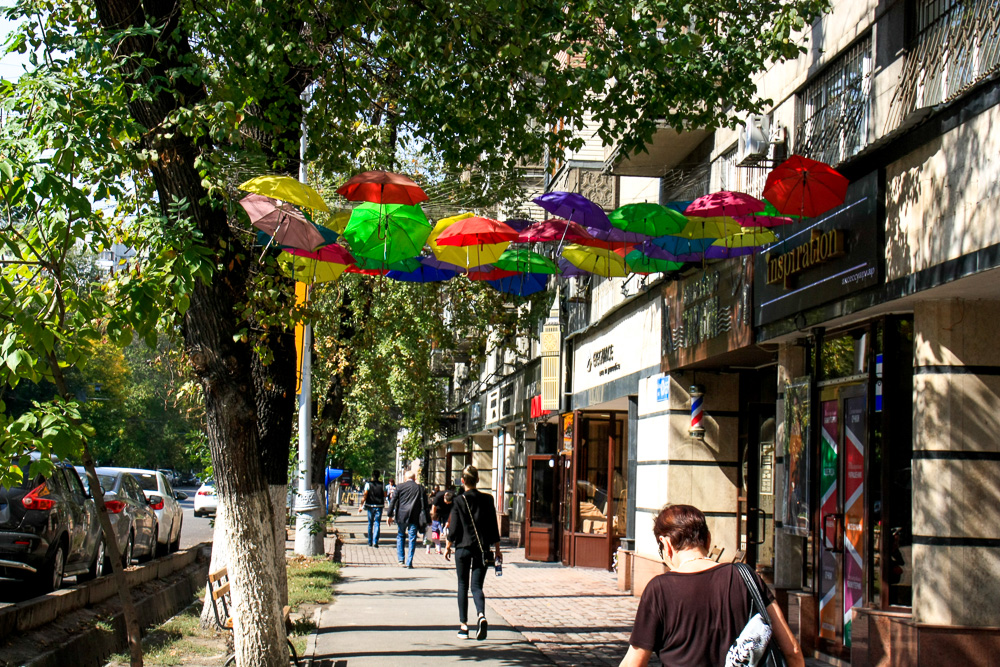 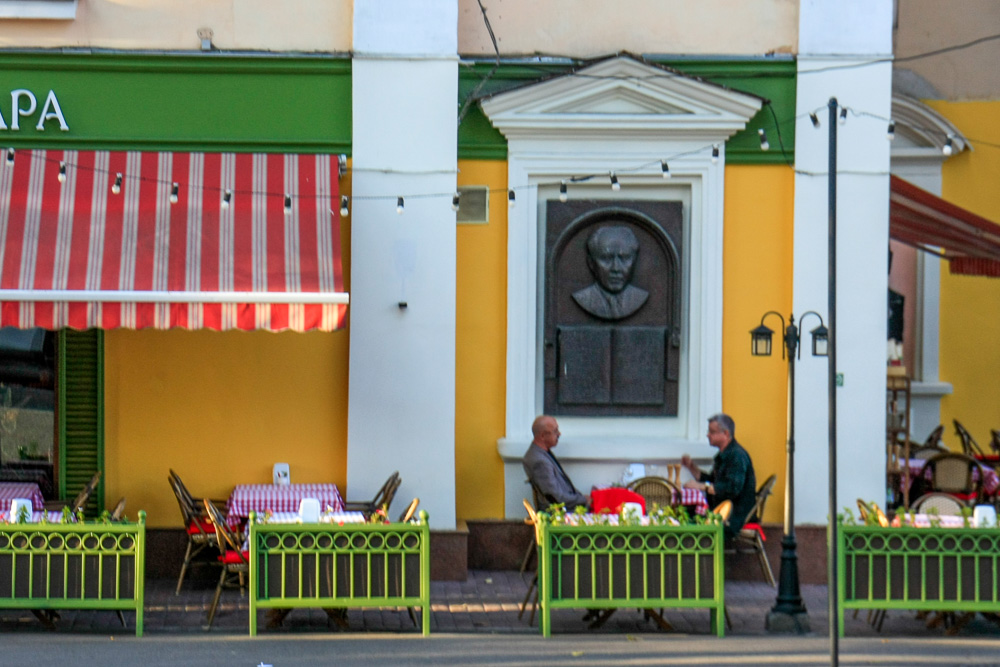 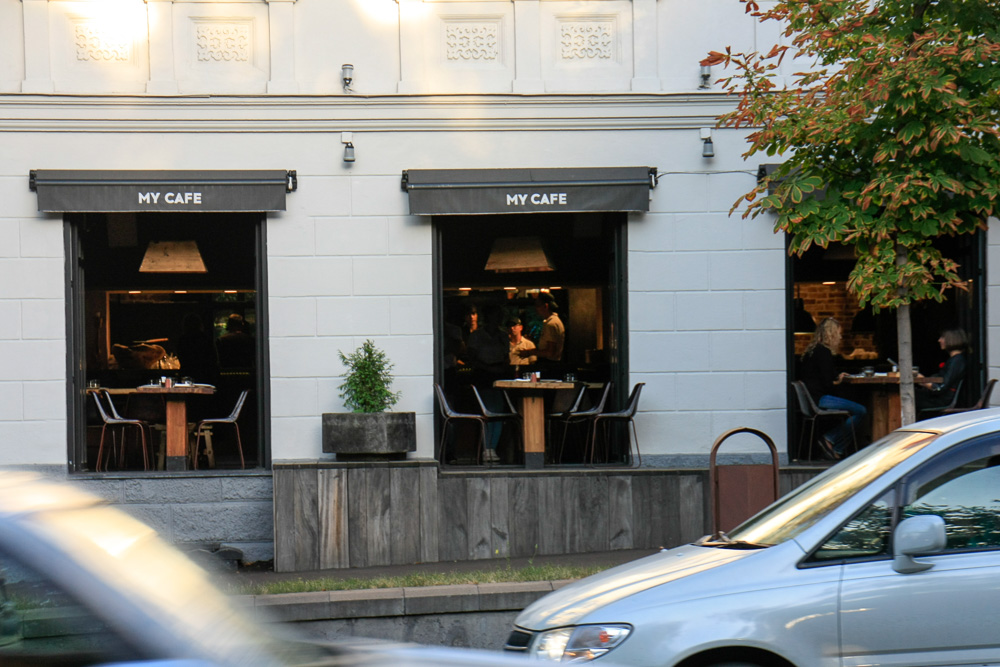 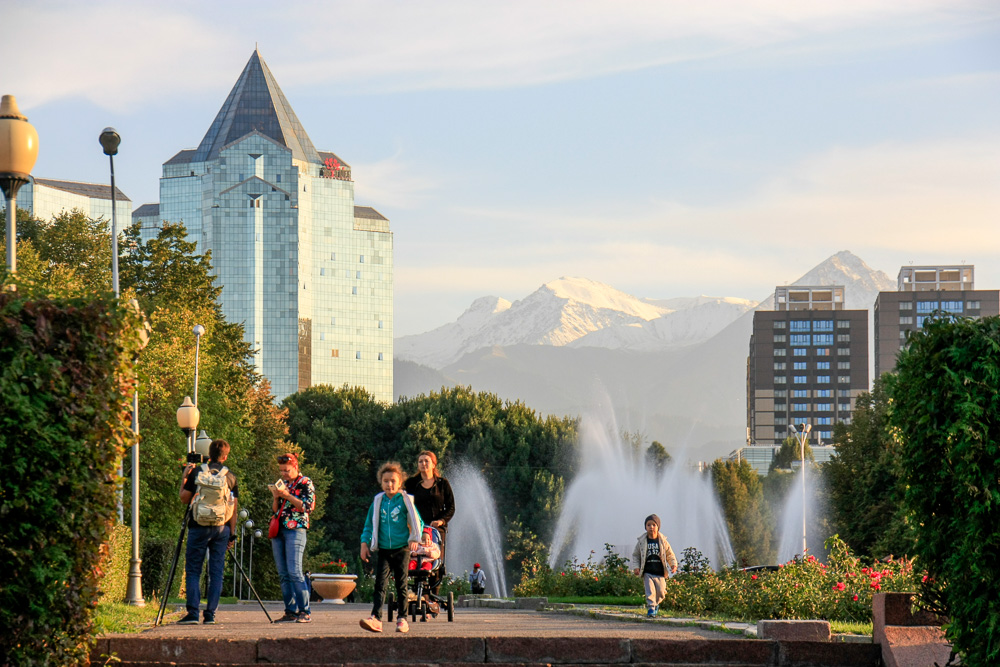 There’s beautiful green spaces and Russian buildings everywhere, but none moreso combined than at the Panfilov Park and the Zenkov Cathedral in the center, with gleaming domes and a pastel-rainbow exterior, and the nearby wooden building of the Museum of Musical Instruments. With tourist maps on many street corners using a QR-code link to an historical city tour (which was admittedly uninteresting to me, having no background in Soviet or Russian historical and literary figures), I stumbled upon another park and found a farmer’s market going on. I haven’t seen one of those all year! While Almaty is known for apples (“alma” meaning apple in Kazakh), as apples are believed to have originated from this region of the world, this market in particular was for honey, with each stall selling buckets and offering samples. Like the many apples I’ve had in recent weeks, this honey was the most fragant I’ve ever tasted, and I rued the fact that I couldn’t just buy a bucket (for a mere $5) and carry it home with me. 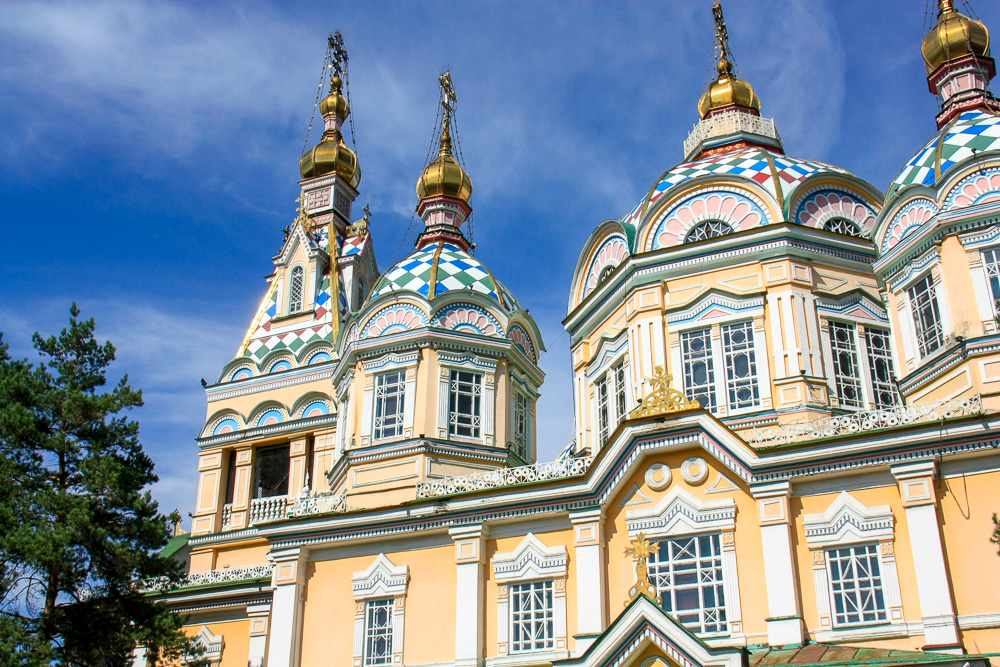 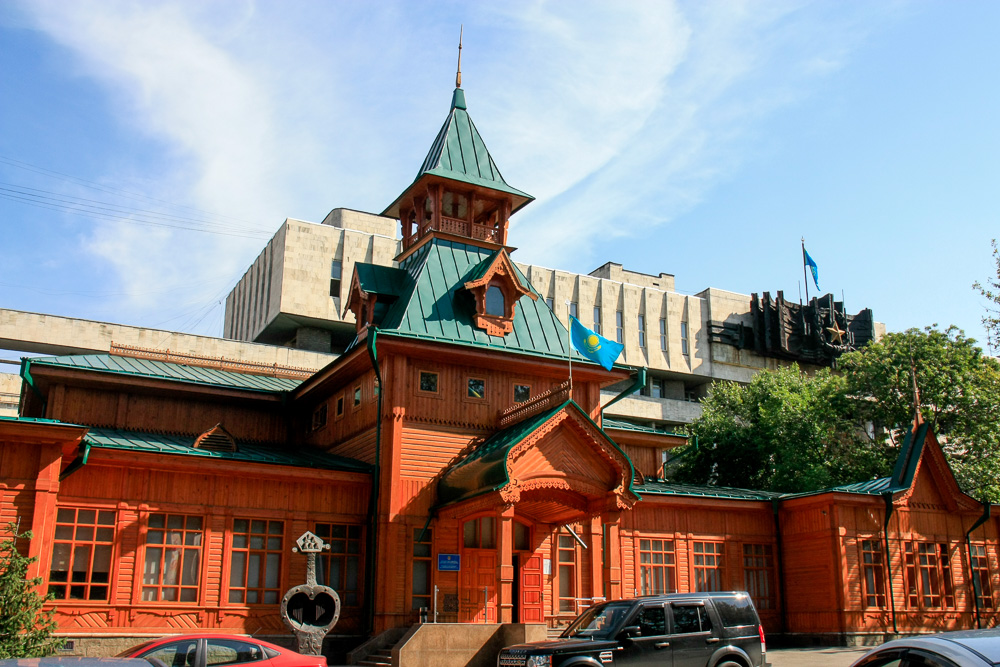 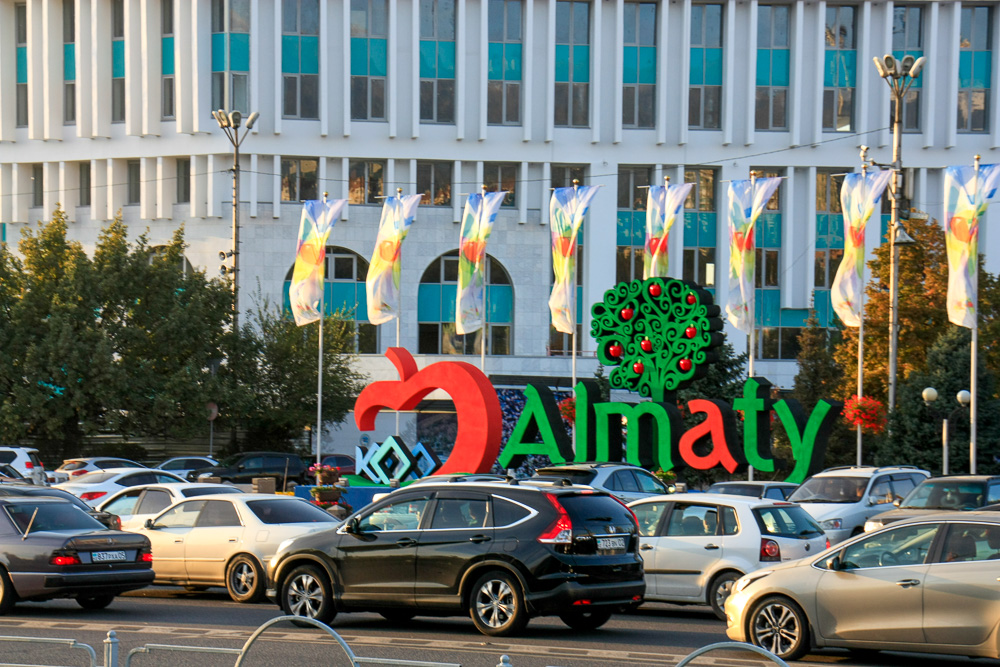 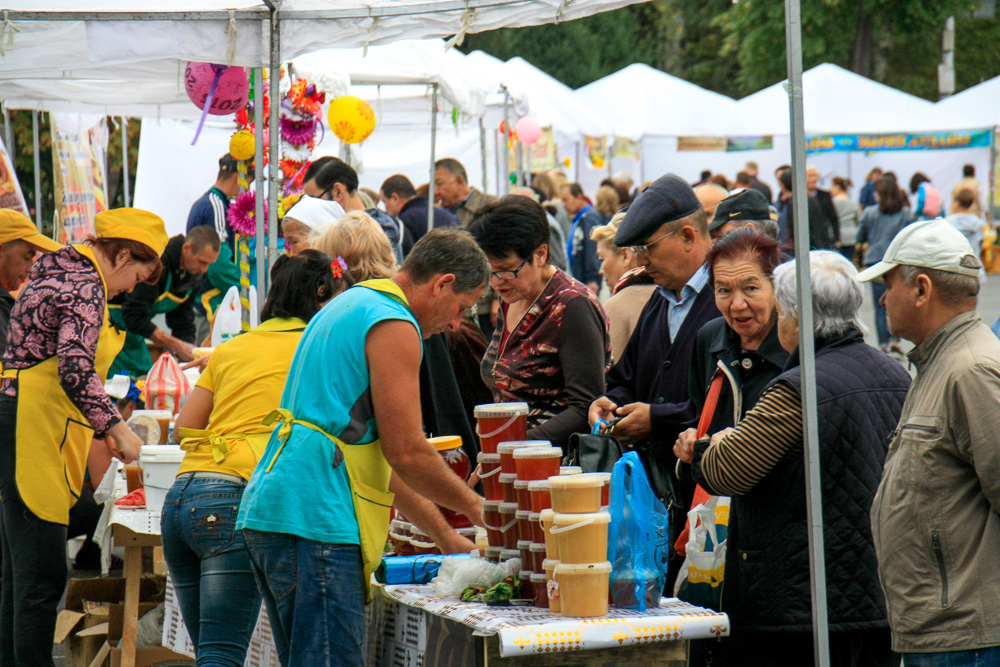 In an ill-timed decision to eschew the cable car and opt for the bus, I headed up to the top of Kok Tobe (“green hill”), just a couple minutes too late for the sunset. (And evidently, not late enough for the ferris wheel, roller coaster, amusement parks, and souvenir shops to stop operating — in fact, they all received more business the later and darker it got, from the many locals heading up the hill with their friends and significant others after work.) I really shouldn’t complain though, the view was magnificent. As the city lights began to pop up everywhere across the landscape, and a massive traffic jam formed on Al-Farabi St, I could only remark that Almaty is definitely a world class city. Heh. 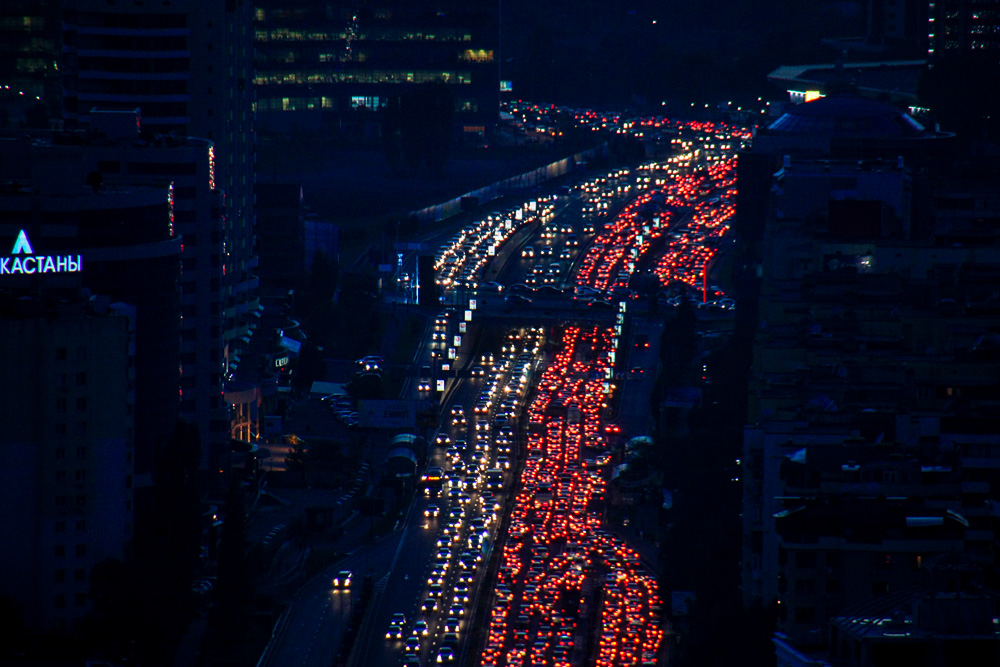 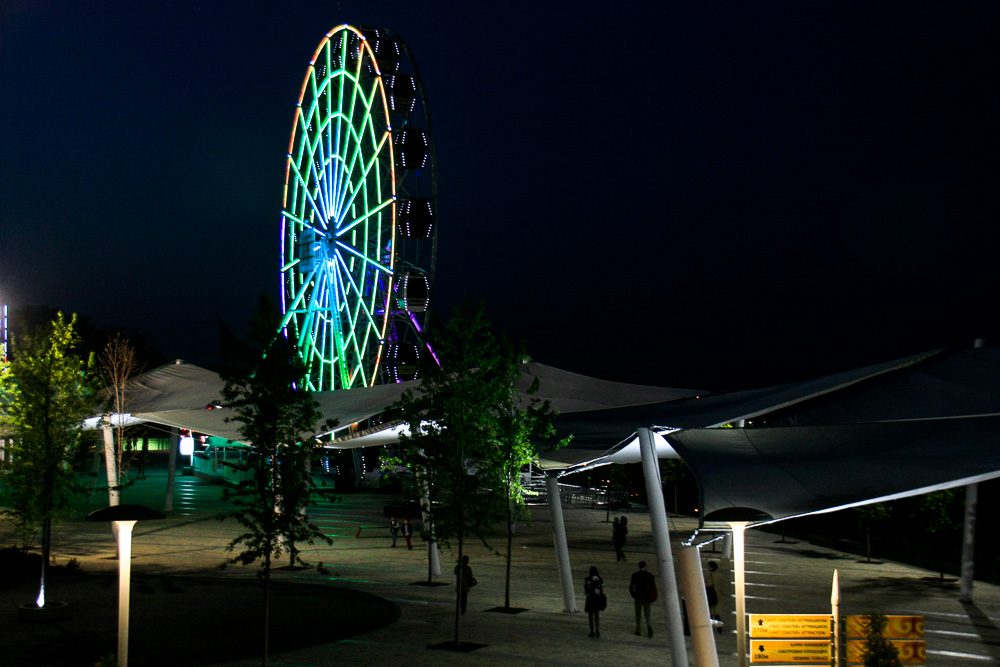 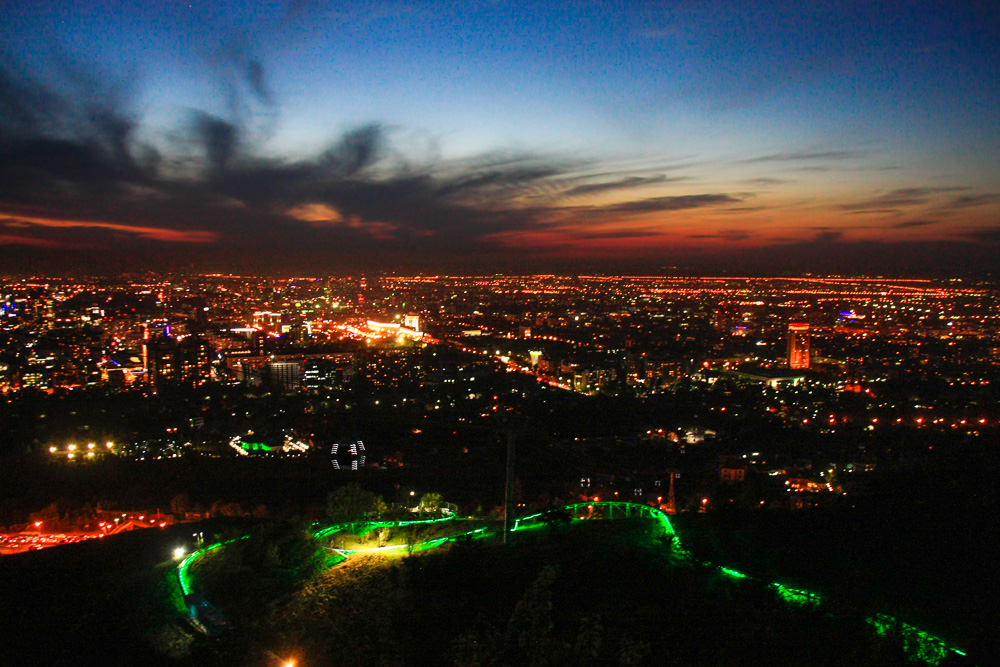 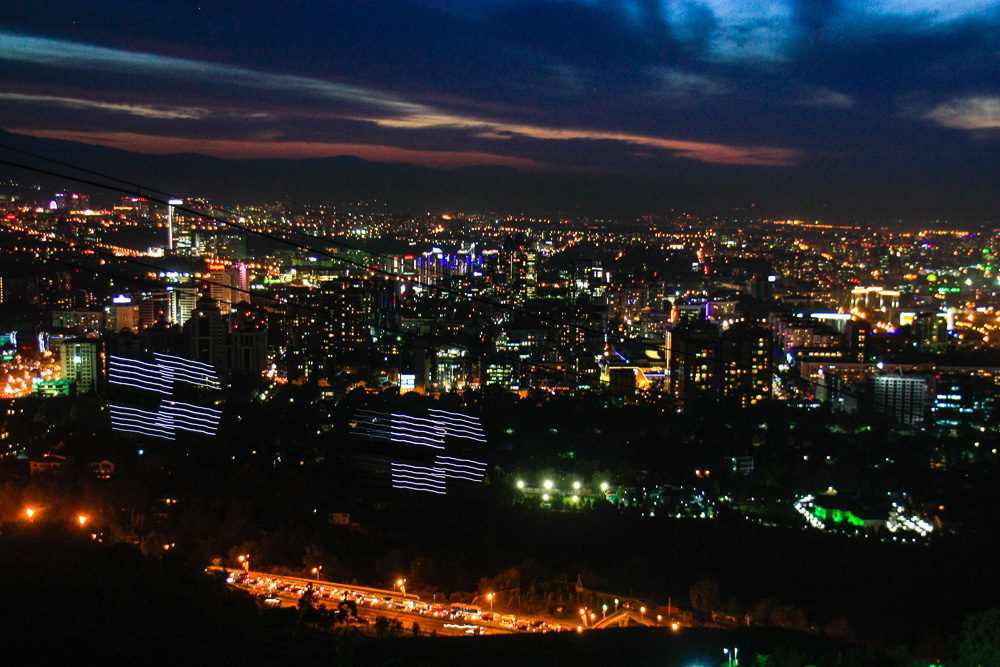 In its quest to be recognised as such, Almaty had bid for the 2022 Winter Olympics. Up against Beijing after prominent European cities dropped out in protest of costs and unaccountability of the International Olympic Committee, it lost by a very surprisingly close 44-40 vote. Despite the many concerns the IOC had against Kazakhstan’s governance (same with China), human rights (serious, but even moreso in China), financing, and fledgling tourist infrastructure… at least Almaty has snow and plenty of winter sports venues within a stone’s throw. Had it won, it would have made a fine host. 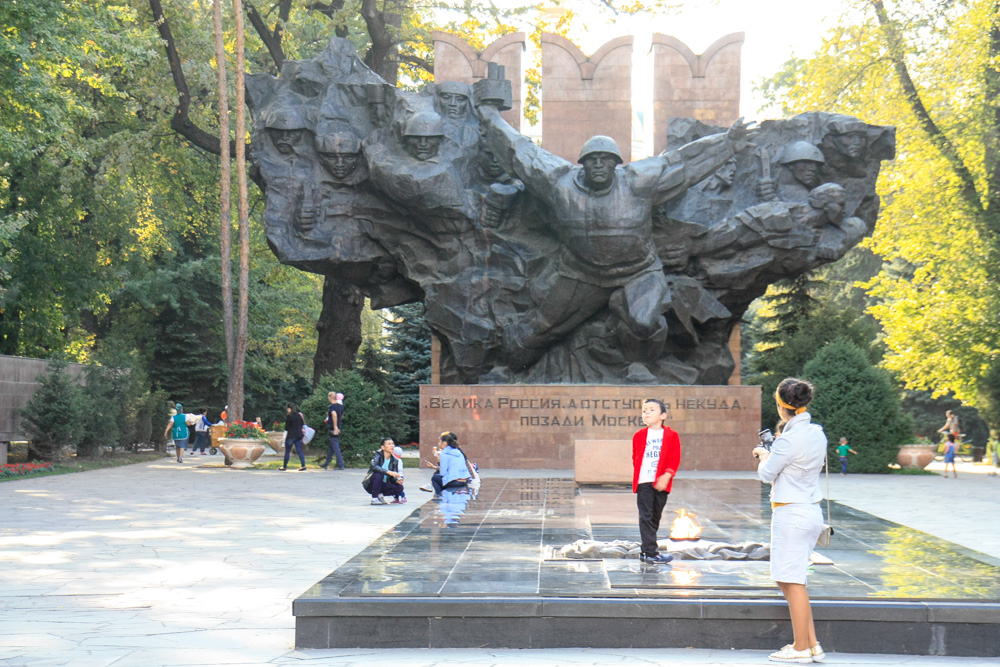 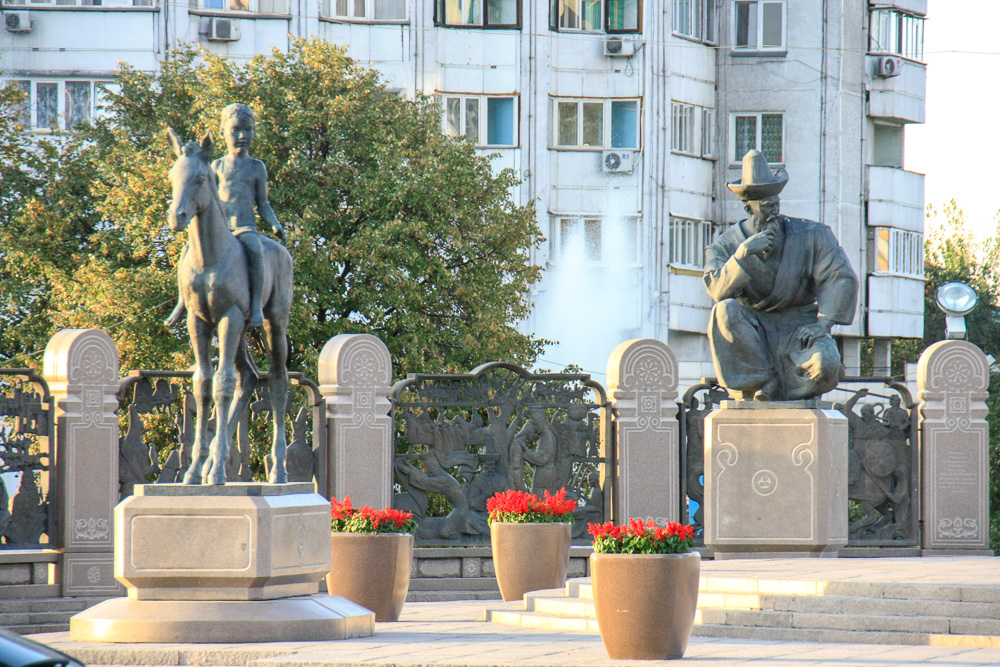 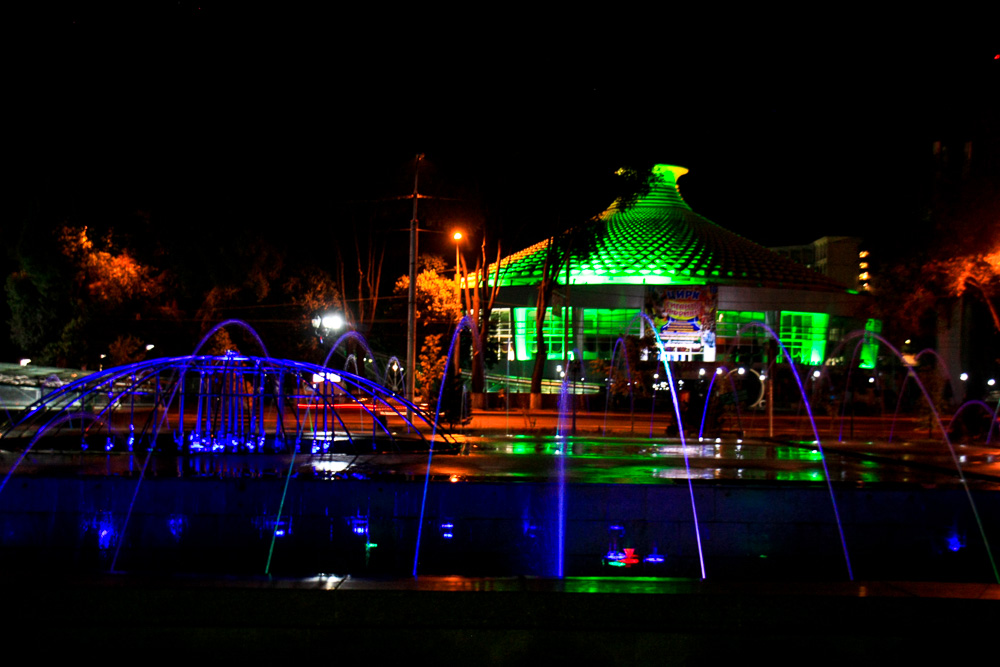 Also coinciding with my visit was the Eurasian International Film Festival, hosted by Almaty this year, and I was fortunate enough to catch one film on the very last day. Held in an IMAX-capable theatre in a gleaming mall selling luxury brands and ice cream for US$2 a scoop — yup, international alright. I picked a film at random, and if “House of Others” was any indication of the content of the rest of the selection, this festival — and Almaty itself — is home to some intriguing, genre-defying art and culture with the eyes of the world on it.

But again, the city’s cosmopolitan nature does have its pros and cons — as someone who looks more like a local than a tourist, I was generally left alone. That’d be great if I was actually a local, but it made for more than a few perplexing moments, being asked for directions in Russian four times in just one day, and receiving confused looks when struggling to communicate in general. (This would probably happen in America if I didn’t speak English! It’s on me for not knowing Russian.) After sticking out so much in Kyrgyzstan and Tajikistan with people often going out of their way to talk to me, I can’t help but admit it felt a little lonely. That did change quite quickly, and Kazakhs showed themselves to be incredibly friendly once they knew I was a visitor. 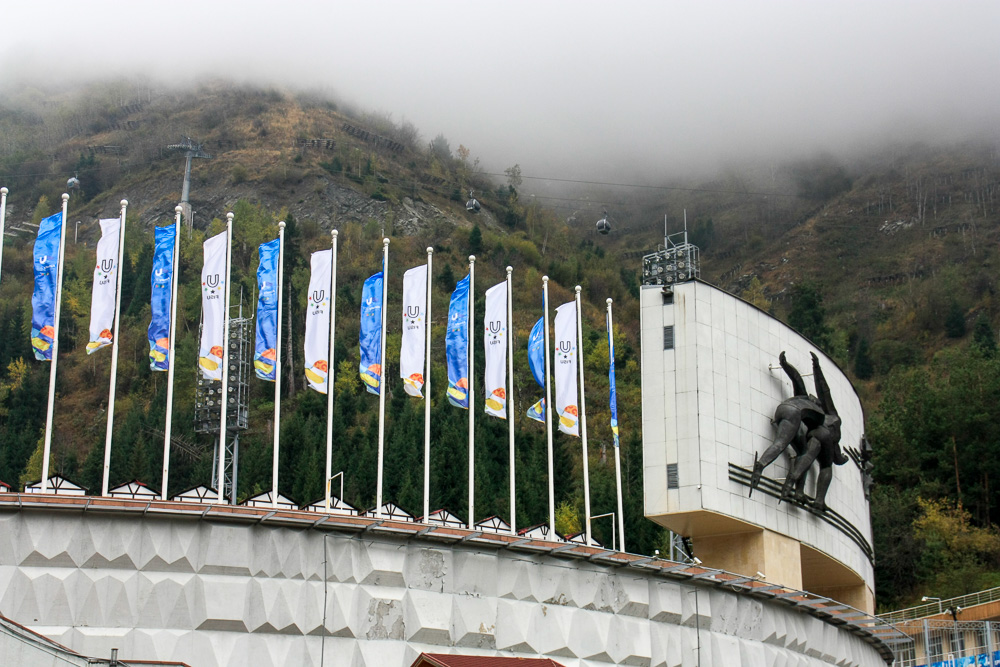 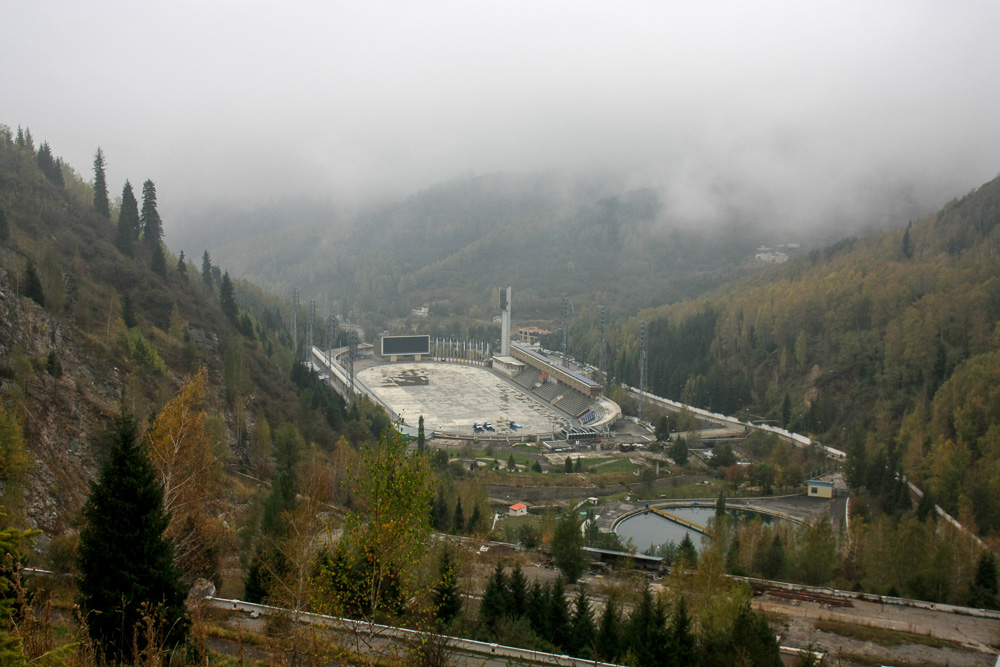 Among the many Kazakhs living at my hostel was Rustam, having moved down south from Astana trying out a new career as a freelance guide to finance his own future travels. Free of plans on a Saturday, the both of us headed up to Medeu just at the southern city limits, home to an Olympic-sized ice rink (open to the public!), ski hills, and other facilities also used for the 2017 Winter Universiade being hosted by Almaty. While nothing but a cable car were operating, we had hoped to hike a little bit, as had the large weekend crowd present. Unfortunately, the cloudy weather and impending rain obscured the mountain views and made it quite chilly, and so we didn’t stay long. Good opportunity to head to a banya!

Finding an affordable (and evidently popular, given how many people were going in and out) one in the city centre (1000 tenge/US$3 for two hours), we headed to the men’s section. Having never been to a Russian-style banya before, I have to admit it was a little jarring to enter an area of complete nudity, but the environment felt about as normal as a supermarket, and people inside were young and old and everywhere in between. Over the course of two hours that flew by, we cycled through the rooms: a few minutes in the very, very hot steam room, a quick rinse in the shower, a jump in the ice-cold plunge pool, one or two buckets of ice-cold water over the head — far from a shock to the system, it felt incredibly refreshing. After each round, we would head to the changing room area, cooling off while drinking some tea, and chatting with anyone around — again, with everyone letting it all hang out. It sounds so awkward yet it certainly never felt that way!

The banya also has its own special paraphernalia — we saw some people wearing their felt kalpaks as sauna hats, which counterintuitively keep the head cool. More commonly, people carried a bundle of branches, with leaves arranged into a fan and the ends wrapped into a sort of handle; we took one as well. After soaking it in hot water and letting it heat up by the coals while in the sauna, we alternated, with one lightly hitting the other (lying down) with the leaves up and down the body. The sensation isn’t one of pain but of extreme heat — the leaves and the fanning action seem to bring extra heat to the skin. While incredibly relaxing, it quickly becomes excruciating for both: the one lying prone heats up like crazy, while the one hitting is being active and standing in a room where the heat is concentrated near the ceiling. The fanning action also brings extreme heat the hands of the one doing it — I nearly burned mine! After running out of the sauna and a few more buckets of cold water, the relaxation is so intense it’s like an anti-headrush — indeed, it seems dangerously addictive to the point you could really lose sense of time after awhile! Circulation is also improved, and I could see every vein in my body glow red through my skin for the next hour.

After two hours of rejuvenation and a thorough soap cleaning, I said goodbye to Rustam as I rushed to the station to catch my overnight train to Shymkent. Stuck in the crowded sleeper class with only locals and blending in, it was the moment I was asked a question and had to open my mouth that everyone in my side of the car realised I was a tourist. 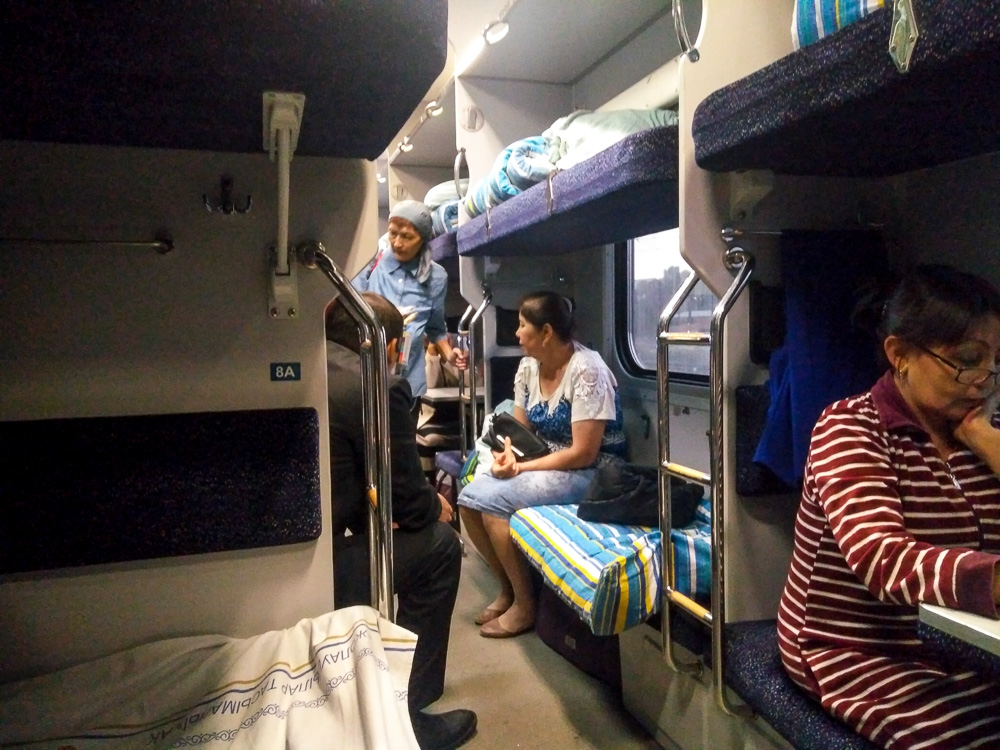 And so for the next four remaining waking hours, I was ushered from table to table, with people asking me to join them to chat and have some food — the latter of which I was especially grateful for, having not had dinner on a night when the train’s restaurant car was closed. Married couple Nurlan and Bibinur were especially nice and also spoke some English, and we had a grand time as they tried to teach me some phrases in Kazakh while others (even the attendants) in the train car would peep around the corner or choose to join in with other words they thought I should learn. I was sad when the train ride ended, it was too soon to say goodbye to these new friends! 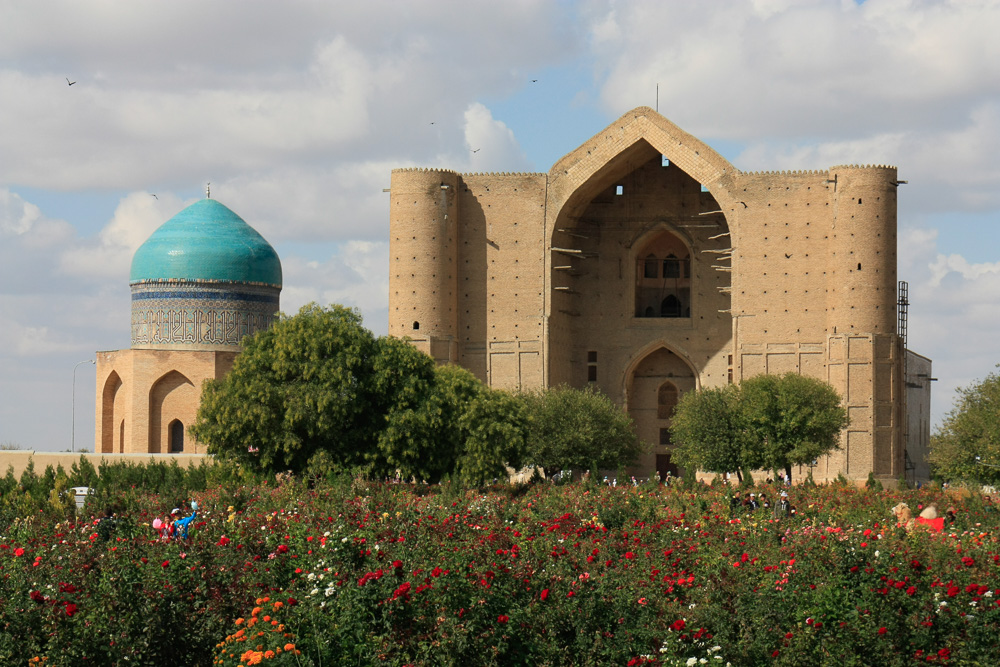 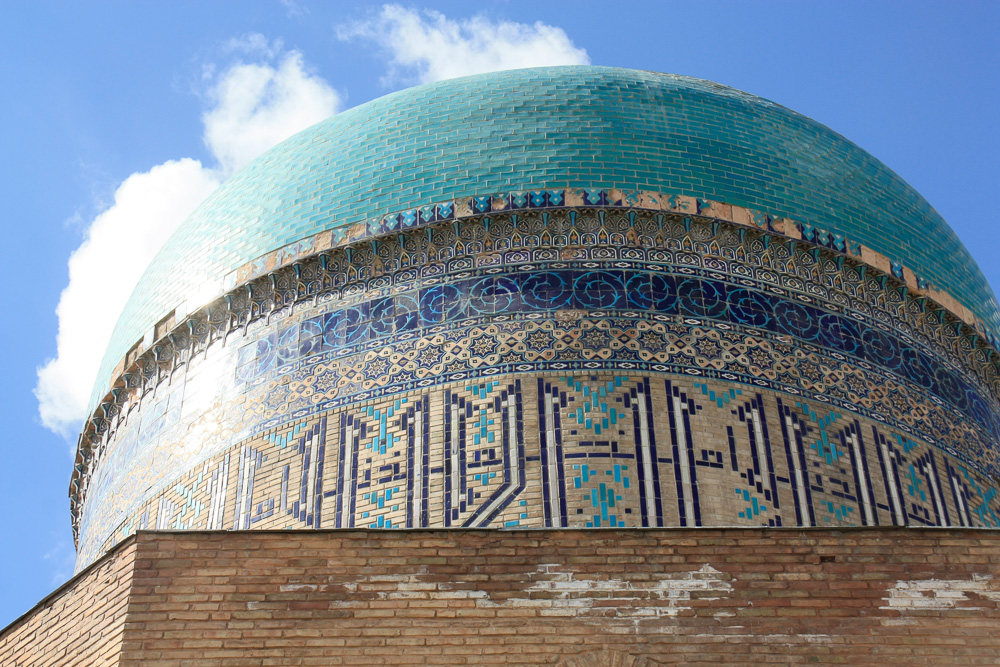 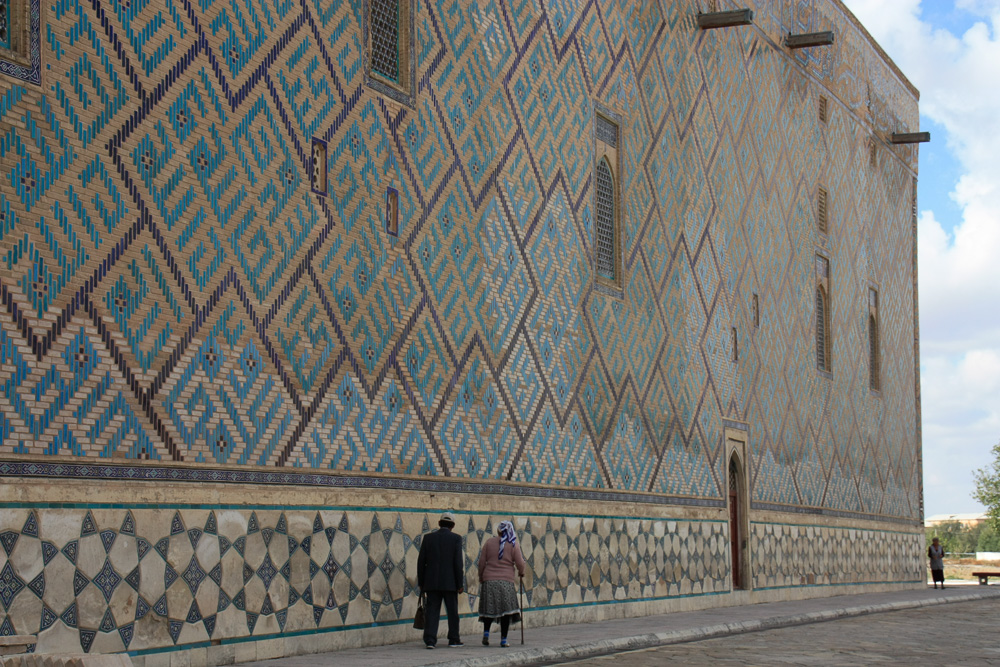 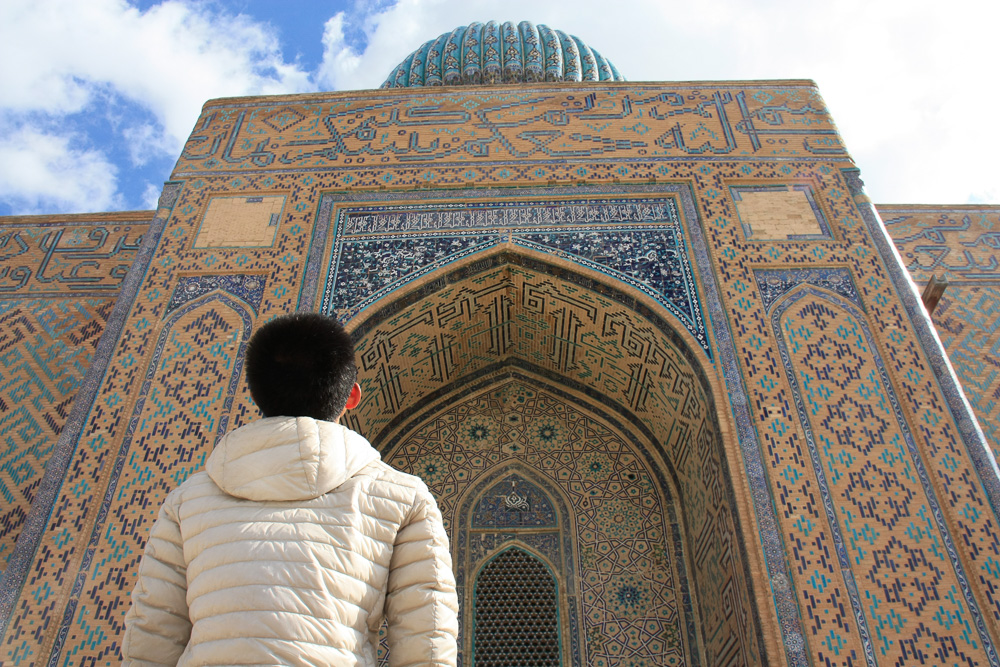 It also felt too soon to say goodbye to Kazakhstan, at a time I felt like I was just getting warmed up to the place. I spent my last day on a daytrip to the city of Turkistan, home to the mausoleum of the preacher Kozha Akhmed Yasaui, a local native Sufi from the 1100s who was integral to the spread of Islam. Commissioned by conqueror Tamerlane in the late 1300s, it was never finished after he died, with the front facade incomplete with scaffolding. (Oddly enough, despite this being a significant pilgrimage site… that’s all the info we’ve got in English from the exhibits there.) The rest of the building is covered in wondrous blue tile work and the all-too-famous domes — while this is Kazakhstan’s most famous and spectacular historic site, it’s but a preview for my next destination: Uzbekistan, the land of blue mosques!

One thought on “Cosmopolitan”