¡Buen dia! You’ll have to excuse any typos, it’s tough to get used to a Spanish keyboard, and I’m still quite jet lagged…

My first impressions have been quite odd and take me back to my Christmas break in Vancouver. Upon flying in, the landscape looked like a game of Settlers of Catan severely lacking in bricks and rocks. Turns out that the city of Buenos Aires is quite far away from the airport, and the land around for miles and miles is farmland. And going around town, my interactions with others lead me to compare their currency situation with Monopoly Deal. Argentina does not seem to have enough small change – people hesitate or even outright refuse to give it! A Swedish girl at my hostel whom I met while checking in, Amanda, recounted her story of a store refusing to give her a quarter that was part of her change, instead giving her a piece of candy of similar value. Turns out that there’s even a black market for coins, which are required for the bus. If you don’t have the small change, you must overpay or just don’t take the bus…

It’s hot outside. Coming directly from winter, it’s quite a welcome change…but the locals, they all wear jeans! I really don’t know how they do it. 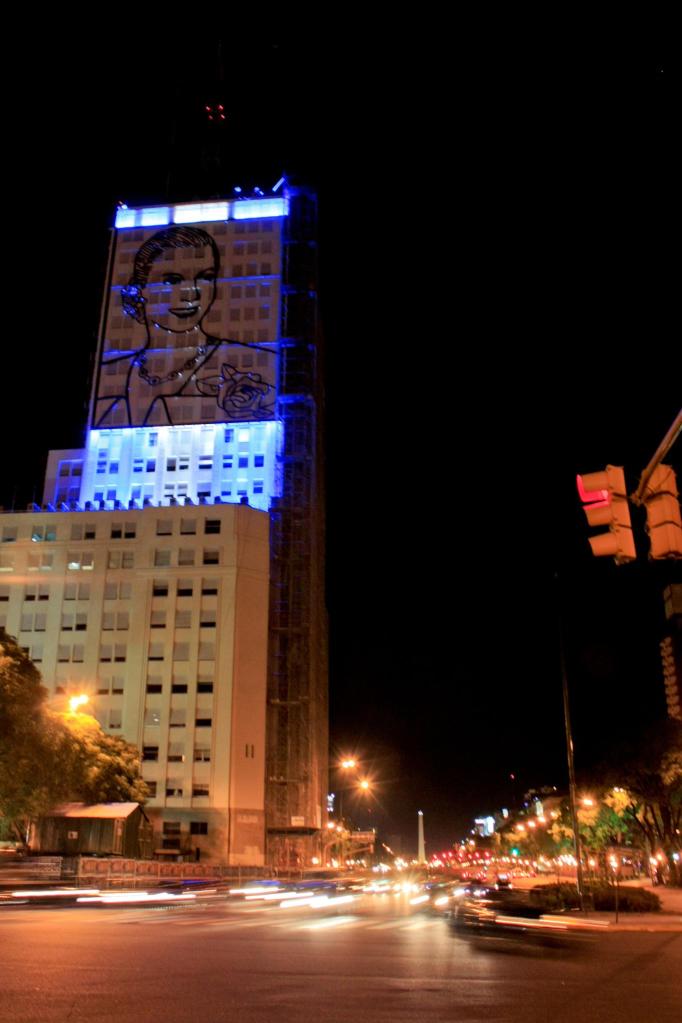 The city is beautiful, and feels like an eclectic mix of everything: European style buildings, wiiiide streets, colours abound, hipsters everywhere, high class, middle class, ghettos… And that was just the first day. Amanda and I went out to explore Recoleta, which is one part rich shopping district, one part street market, one part blindingly white church (Argentina is very Catholic), and one part grand cemetery for the rich and famous – the most famous of which being Eva Peron (former president). I admit to not knowing much about her beyond “Evita” existing and that song “Don’t Cry For Me, Argentina”… Guess I have some research to do. Nevertheless, the cemetery was an intriguing destination, with some very lavish mausoleums.

After wandering around some more, I had my first meal – asado! Well, I cheated – it was choripan, which is a sausage cut in half, grilled, on a bun. Delicious. And here is where I figure knowing more Spanish would come in handy: while Amanda can speak fluent Spanish, I can’t, so we received different menus. Prices were higher on the English one, and there was something suspicious going on with the bill.

We also headed over to Palermo Viejo, which is further split into Palermo Soho and Hollywood. Soho certainly lived up to its name – trendy and with the same feel as the one in New York, only more pleasant and less crowded! Palermo Hollywood though…uhhh. No clue why it has that name, but it seemed a bit sketchy and we didn’t stay for long. Grabbed ahelado while in Palermo – it’s the local version of ice cream, though a lot more sweet and spready. Surprisingly expensive ($5 for a “medium”) but very well worth it for a hot day.
After walking around for hours, we had some more asado for dinner (really this time, an amazing steak). Another interesting Argentinian trait – they eat LATE. Restaurants don’ t open until 8, and don’t fill up till around 10. We went around 9:30, and only by the time we left, around 11, did it seem bustling. It’s funny to see families with small children out that late, I’d have been sleeping by 9 at that age!  I had a giant bife de carilla (meat overload) and a pure de calabaza (pumpkin) – what looks like mashed sweet potato, but has a lot fluffier texture and is much sweeter.

Day 2, we were joined by a Danish girl, Anne, and an American, Jim. Great company. 🙂 We headed to San Telmo to check out some more street markets. This one was full of antiques; more tourists and crowds but less touristy fare. Around it were many cafes, some stunning architecture, cobblestone streets, and tango dancers and street musicians. It felt a lot more like what I imagine of Europe rather than South America! We sat down for a long drink to take in the atmosphere. I think San Telmo was probably my favourite barrio. 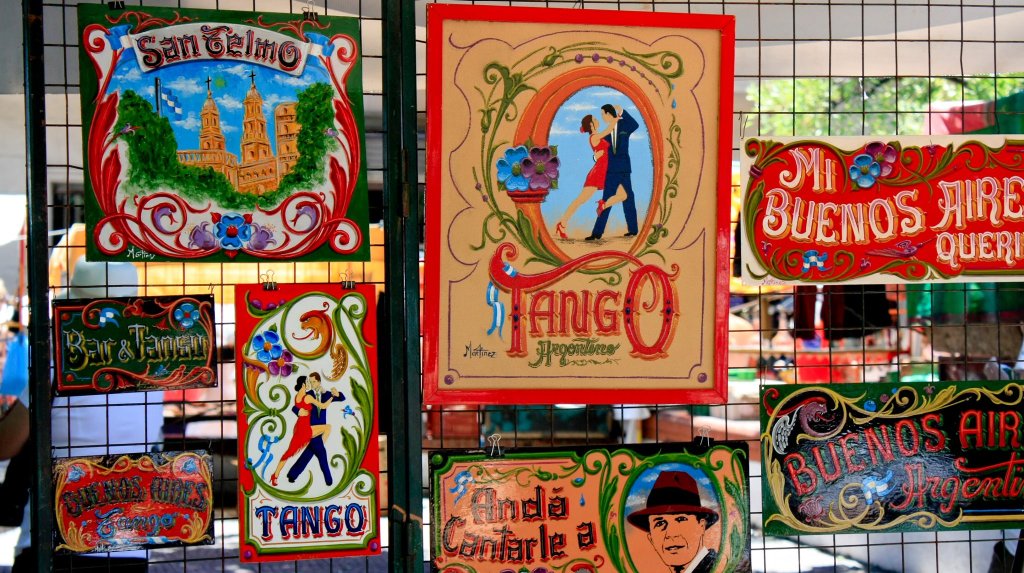 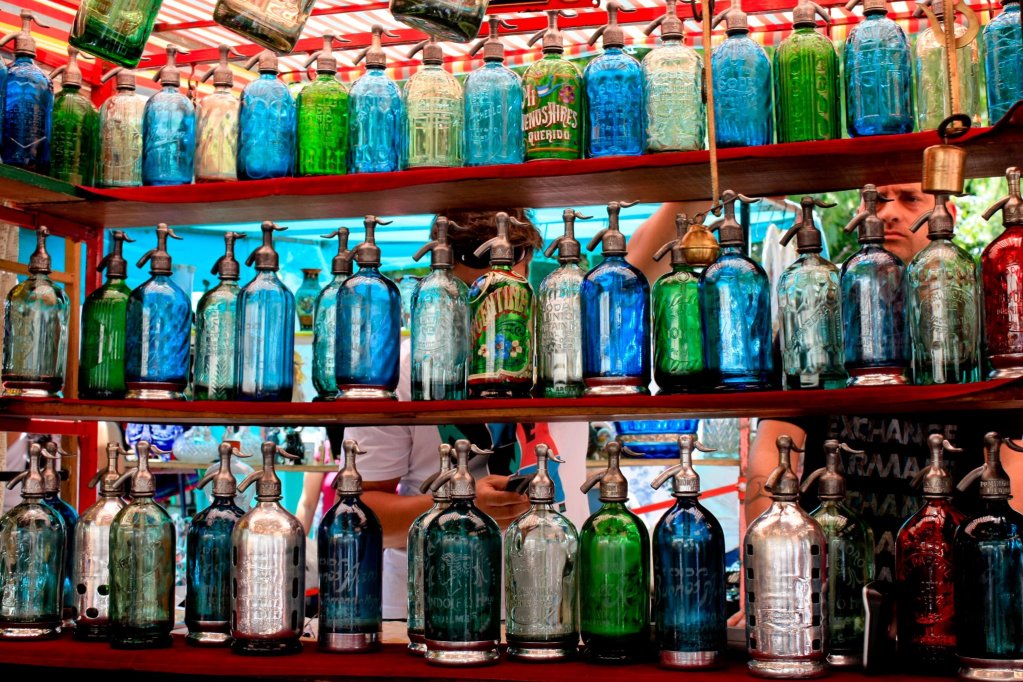 Then it was off to La Boca – home of the famous soccer team Boca Juniors, but our purpose was to visit the very colourful buildings around. While the neighbourhood’s kinda turned into a tourist trap (at least the safe part), I am indeed a tourist and enjoyed it plenty. I do wish that buildings would be painted in more bold, whimsical colours back home! 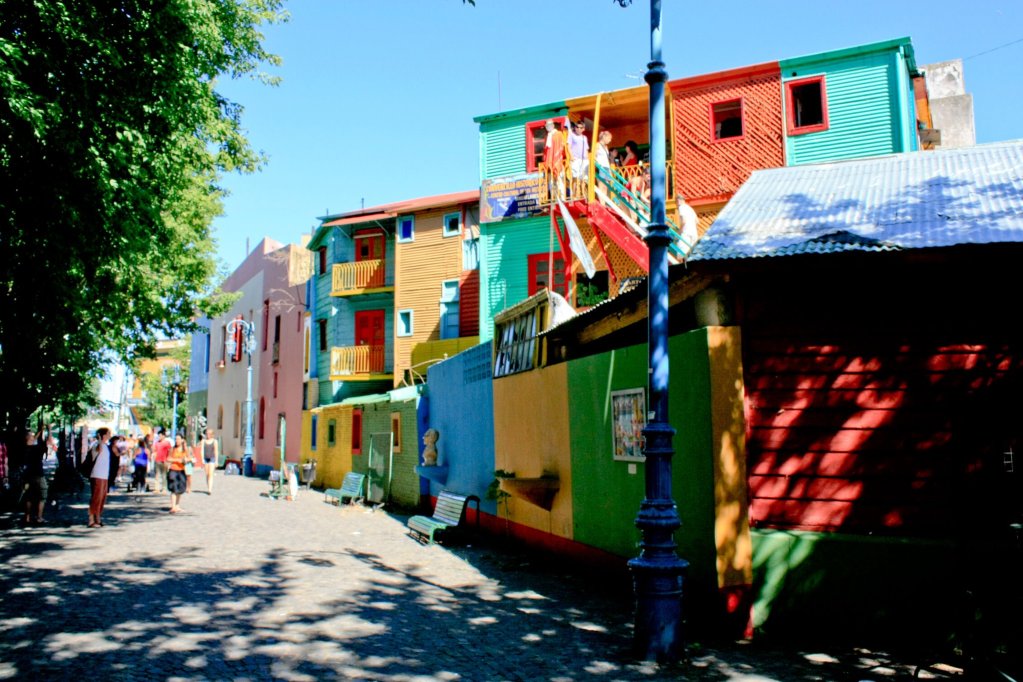 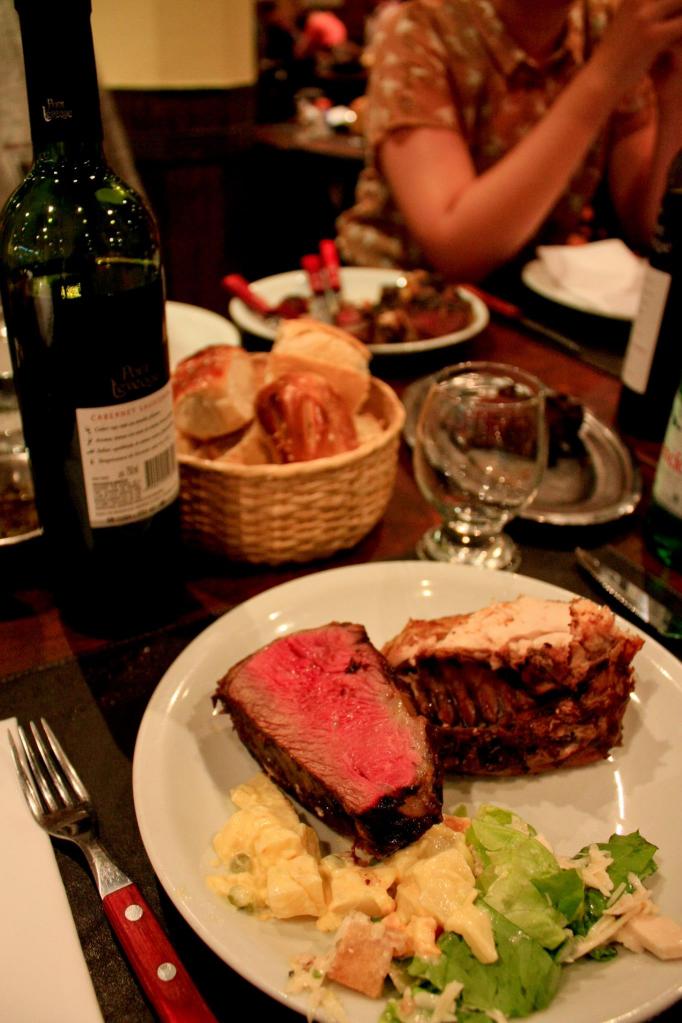 We then joined a bunch of people on the roof of our hostel for some drinks before heading to dinner with an expanded group – even later than the night before.  We headed to Siga la Vaca: all-you-can-eat asado and a free bottle of wine and a free bottle of carbonated water and a free (actually very delicious) dessert per person…for about the equivalent of $30.  Quite a splurge, but when in Argentina…  So many different cuts of meat, with Spanish names I knew nothing about!  I just randomly pointed at things on the grill or asked for things on the sign without knowing what they were.  So good…but I think I can go meatless for a week now!  And dessert?  Bread pudding with a whopping portion of dulce de leche (which is super sweet, and Argentinians seem to put it on everything – it’s even a breakfast food).

We went for dinner at 10 pm and left at 1 am.  Families with babies were still in the restaurant, there was plenty of traffic on the streets and many people out in the cafes.  It still boggles my mind!  As such, I wandered around on my own to take a couple night photos (and to walk off the enormous dinner) before heading to bed.  It feels a lot safer on the streets at night compared to what I’ve been hearing, but I’m being cautious! 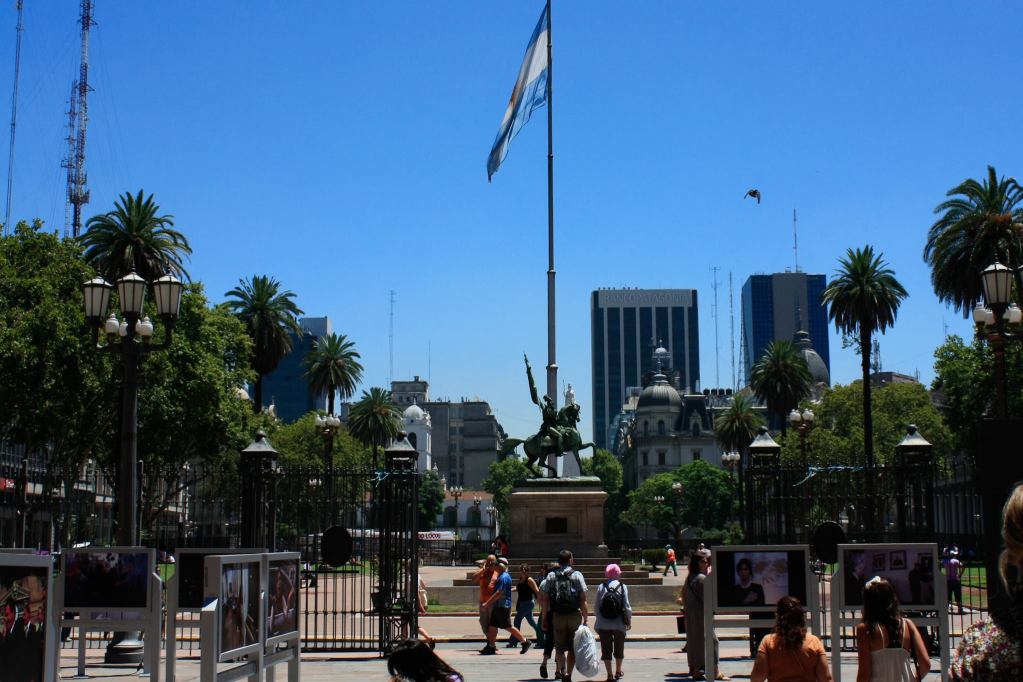 Quote of the night: Jim, a teacher at a university in the States, mentions his rating on RateMyProfessor.com, which doesn’t exist in Denmark.  Anne: “RapeMyProfessor.com?!”

I’ve got a couple days left here before flying off to Ushuaia, and I’ll upload some pictures eventually.  Until then!