Oh, the trials of traveling solo.  I intended to head over to Colonia del Sacramento, Uruguay, for a day trip, but found all the ferries booked.  Serves me right for trying the day before I wanted to go.  If I had a travel companion, I’d probably have been a little more responsible.

So, with extra time in Buenos Aires, I decided to take it a little easier.

Day 3, Amanda and I headed over to the Microcentral area (downtown), as it was finally a weekday.  Bustling with people, we walked down to the Presidential Palace and the Plaza de Mayo, then over to the shopping streets of Florida (pedestrian only) and Corrientes.  Though I didn’t buy anything as usual, it was just good to get a sense of the modernity of the city.  After passing by Teatro Colón and the giant Obelisco dominating the sprawling Av. 9 de Julio, we split up, and I headed to Puerto Madero on my own.  Puerto Madero is the newest barrio in town, a gentrified waterfront area with expensive property and shops.  After seeing the needle-like pedestrian-only suspension bridge, Puente de la Mujer, I headed home completely exhausted and joined a few others at the hostel for drinks on the rooftop terrace and dinner in the area.

Having covered nearly everything I wanted to, day 4 had a lot less going on.  I returned to Recoleta, this time without the market around, and went to the Museo Nacional de Bellas Artes (fine arts museum).  I’m not a great fan of art, and the first floor didn’t help too much – plenty of European stuff you can see in other museums around the world.  It’s an admirable collection, with the requisite Monet, van Gogh, et al., but not quite my thing… However, their South American collection was well worth seeing.  It was absolutely perplexing that there was only a tiny section on the first floor, and a small second floor entirely dedicated to it that was only accessible by an elevator (the stairs were there and very visible, but blocked off without any sort of notice) that most visitors seemed to ignore!  The artists there were all unfamiliar to me, with a bold style of hyper-realistic shading and emphasis of colours, in contrast to the accurate portraits or impressionism of the European art you usually see.  I was saddened to see that I was the only person on the second floor while I was there.

The heat became rather punishing and I returned home absolutely drained and just sat around for a few hours watching the Simpsons dubbed in Spanish.  You know how the theme song begins with “The Simpsoooonssss…?”  The Spanish version has the same theme song, but has some guy dub “Los Simpson!” over it in the most comical, stereotypical accent imaginable.  After getting sick of TV, I headed up to the rooftop for one last time.

Around 8:30 pm, feeling antsy for something to do, I headed over to Villa Malcolm on Jim’s suggestion.  Long cab ride.  I had expected a milonga (basically an event where locals dance tango for fun), but was surprised to be dragged into a beginner’s lesson (25 pesos/$6).  So yes…I now know how to tango in a circle.  The instructor was kind enough to talk to me in English (I was the only one there in the group of 10 or so that couldn’t speak good Spanish), and Jim translated for me when he didn’t.  I enjoyed wordlessly interacting with locals there…

We hung around hoping for a milonga to begin, but alas, nothing came of it even by 11:30 pm.  I headed home completely exhausted, glad to have tried the surprise lesson, but admittedly a little disappointed not to have seen a milonga.  When I checked my email just before intending to sleep though, I found an email from Roman, a local friend of a friend (thanks Bernhard!).  Though he was out of town, he strongly suggested for me to check out the milonga at La Catedral, especially since they do something big on Tuesday nights.  Though I was tired out of my mind and also needed to wake up at 9 the next morning to change hostels (mine was fully booked), I figured, “When will I ever be in Buenos Aires on a Tuesday again?” and dragged myself there.  Alas, another long cab ride with no one to split with!

Boy, was that worth it.  After figuring out the measly entrance fee with my terrible Spanish (30 pesos, just as much as the cab ride), I sat down at a random spot on the side of this very, very packed bar with a dance floor.  The atmosphere?  Well, that high ceiling certainly made it feel like a cathedral, but the dim lighting and the hip decor put it into the current age.  Porteños everywhere, and I stick out, the Chinese guy with a big camera wearing shorts instead of jeans…  All the locals out were just there for a good time, and there were intermediates and experts on the dance floor.  While just watching the dancing on the whole was an amazing experience, I really appreciated having taken the lesson at this point – I learned that tango is a wholly improvised thing with no pre-planned moves.  The man leads, and through his subtle signals, whether by how his body moves, where he steps and how far, and how he moves his hands, the woman knows exactly what to do and where to go, whether to step back, spin, step forward, cross her legs, slide…  It all looks so sharp!  I felt that this was so much more worth it (and cheaper!) than a show simply geared towards tourists.  Probably my most positive experience in Buenos Aires! 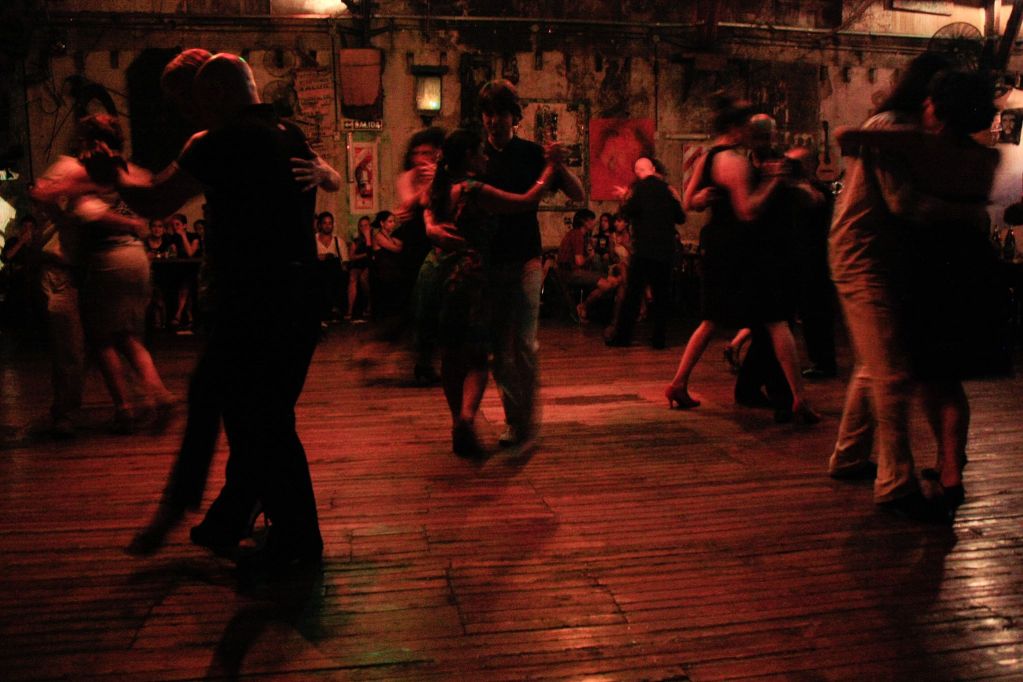 To make matters interesting, around half an hour later (12:30 am at this point), a porteña (local girl, dressed to the nines), Verónica, sitting next to me notices my camera and starts talking to me.  We very quickly discern that I can speak limited Spanish and she can speak limited English…and Mandarin!  (She wants to do her PhD in economics at Tsinghua.  Her most fluent phrase in Mandarin was to offer me a beer.  I politely declined.)  Over the course of two hours, we talk and try to teach each other random phrases in our three shared languages, complete with copious amounts of gestures and attempted comparisons with language cognates.  Given our pace, I think we could’ve had the same conversation in about 10 minutes if we were fluent, but it was all in complete fun!  She also introduced me to the style of nuevo tango that was playing, emphasizing “la revolución” brought in by Ástor Piazzolla in recent decades.  Then came this little tidbit between songs:

Ahaha… Poor girl was so embarrassed (and indeed, she meant bathroom).  Nonetheless, I appreciated having a chance to practice my Spanish and learn a bit more in a very relaxed atmosphere, and to learn more about Argentine culture as she introduced it.

Around 2 am, a live band started playing and the experts really came out onto the dance floor.  Loved the music – I think I’ve gained a new appreciation for the accordion.  As with all the best moments while traveling, no pictures could do it justice, try as I might.  I said my goodbyes to Verónica and her friends at 2:30 am (I was quite reluctant to leave and even more people were coming into the venue, but any later and I wouldn’t possibly be able to wake up the next morning), ran around the deserted streets looking for a cab (so this city does sleep after all!), then went to bed well past 3 am.

Oh, the rewards of traveling solo indeed.  Had I not gone to La Catedral alone, I probably wouldn’t have had that kind of experience.

Day 5, I managed to drag myself to my next hostel early in the morning..  Having only one day left in Buenos Aires with truly nothing planned, I wander around aimlessly and promptly get lost in San Telmo among some beautiful buildings and cheap helado.  A lovely way to close out my time in this city, as I had a flight to catch at 6:30 am the next morning.  (Unfortunately, my hostel decided to pump loud music until 12 am,so that’s two sleepless nights in a row…)