It’s been seven days. And I’ve had a wonderful time – in fact, I just got to the southernmost city (not quite settlement, but city) in the world! But I’ve just made a decision that leads me to have to say goodbye to Argentina, goodbye to South America, goodbye to my budget, and goodbye to my plans all so soon…

Well, temporarily. At least for some of those things.

This is something that really wasn’t planned. I had Ushuaia planned, but always brushed off the possibility of going on an Antarctic cruise – too expensive, and I felt like I could always do it in the future…

But then about a day before I left for South America, I started thinking about it. And when I got to my hostel in Buenos Aires, I heard from other people who did it and called it “life-changing”.

When I got to Ushuaia, I shared a taxi out of the airport. One girl from England was heading out on a cruise on Saturday, and though it was “ridiculously expensive”, she was excited beyond belief…and so was I, for her, even though I didn’t know her!

When I got to my hostel here, I dropped off my things, and decided out of curiosity to look for last minute slots on any cruises leaving in the near future. Last minute prices are in the range of $3500 to $5500 depending on the type of voyage. Very expensive, but the real prices (like the one the English girl booked) can be over $10000. I’ve also heard that last minute spots can be either really easy to come by (book it and run straight to the pier to get on the ship) or really hard (some people I met waited in Ushuaia for three weeks).

I found a travel agency advertising a last minute placement, leaving Saturday. I inquired kind of jokingly…but they were looking for someone serious. Well of course!

Not knowing anything about this travel agency and its reputability, I looked around. Other travel agencies were offering the same price, and I was told the same at the tourist centre in Ushuaia. Turns out that cruise companies desperate to fill up their last remaining slots will send the same prices to everyone, so that’s a-okay.

I ran back to my hostel looking for someone to talk to about this…and lo and behold, I ran into two people who just disembarked from their Antarctic journeys – Gesine from Germany, and Neel from the States. Apparently the price I found was very, very good, and they implored me to take it, recommending to me the travel agent they used.

Well…I’m in Ushuaia, the cheapest and closest point in the world to access Antarctica. I have the chance to do a once-in-a-lifetime trip to a place few have gone, and for much cheaper than almost everyone else. While I do have a budget, this is something I can afford, just barely. Also, it’s one of those dream places I had as a kid. Penguins! (Different from the ones in South America.) And if I don’t do it now…I’d regret it, right? It’ll only get pricier in the future. I decided to take the offer and run with it.

So yes, I’ve booked a cruise to Antarctica, leaving Saturday from Ushuaia, and flying (yes, flying from Antarctica) to Punta Arenas, Chile on the 28th. It’s all a bit surreal. But it does blow up my entire planned budget (that’s okay, it was an arbitrary estimate anyway, but I’ll be more cost-conscious after this) as well as my planned route. I will have to be a lot more selective with my destinations in the future, as I won’t be able to cover everything by land without torturing myself. So, seven days in and I’m already ditching my plans!

Whew. And I did that three hours within landing in Ushuaia. I don’t think I’ve ever done that much running around in my life – but with how lucky I was to find a last minute offer right upon arrival, I didn’t want to waste any time. And then I had to run around some more buying gear for Antarctica, as I did not pack in preparation for such a cold climate. At least I get a free parka from the cruise!

After I booked, I returned to the hostel for dinner, joined by Gesine, Neel, and Cindy from the Netherlands. We tried to convince her to go to Antarctica as well. Almost…but not quite. The Antarctic stories that I heard though…I cannot express how excited I feel. Not to mention all the other South American travel stories I heard about from the three of them!

Anyway! Ushuaia itself? It is indeed one of the southernmost settlements in the world, and you can just tell by how long the sun is up – it doesn’t get dark at all! Sunset is at 11:30pm and sunrise is at 4:30 or so, from what I hear. I’m writing this now at 9 pm and it feels like it’s about 3 pm at home! 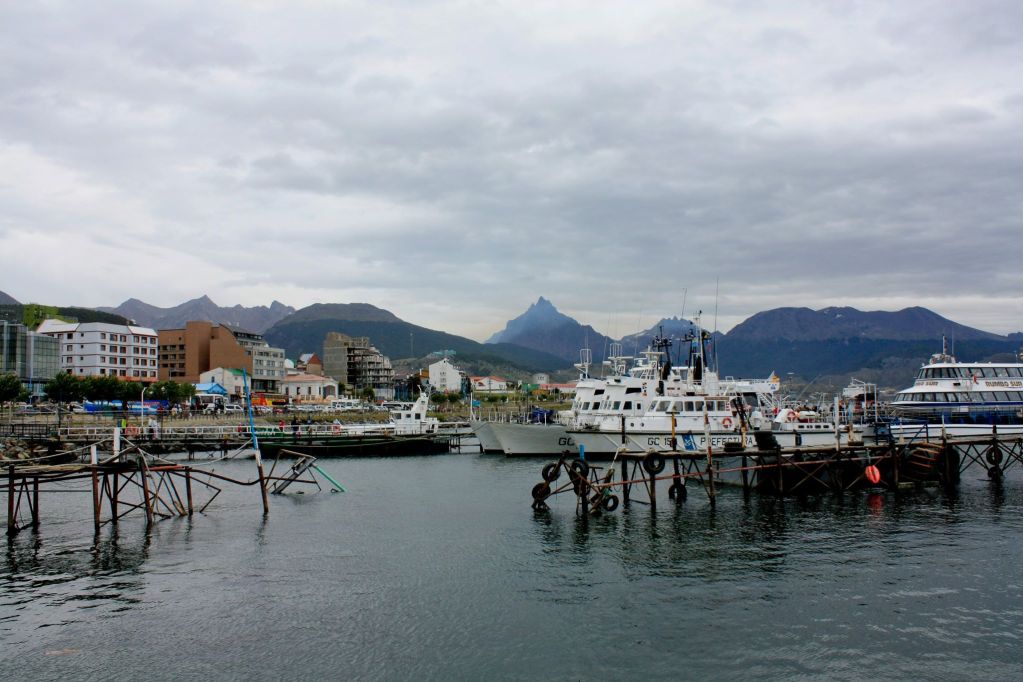 Walking around town, there are plenty of kitsch “el fin del mundo” (end of the world) souvenirs and signs, and the setting is beautiful – big Andes mountains to the north of the very uphill city, and the Beagle Channel (and Chilean Patagonia) to the south. Given its remoteness, everything is quite a bit more expensive though.

After the rush of booking the cruise, my travel agent (Daniela – super nice lady with a big shaggy dog, Him) recommended I take it easy. So I headed off to the Maritime Museum/Prison Museum (yes, they’re both one and the same…) of Ushuaia, housed in the former prison. Ushuaia was used by the British as a prison colony in the past, kind of like Australia, but with its harsh climate and remoteness preventing any sort of escape. 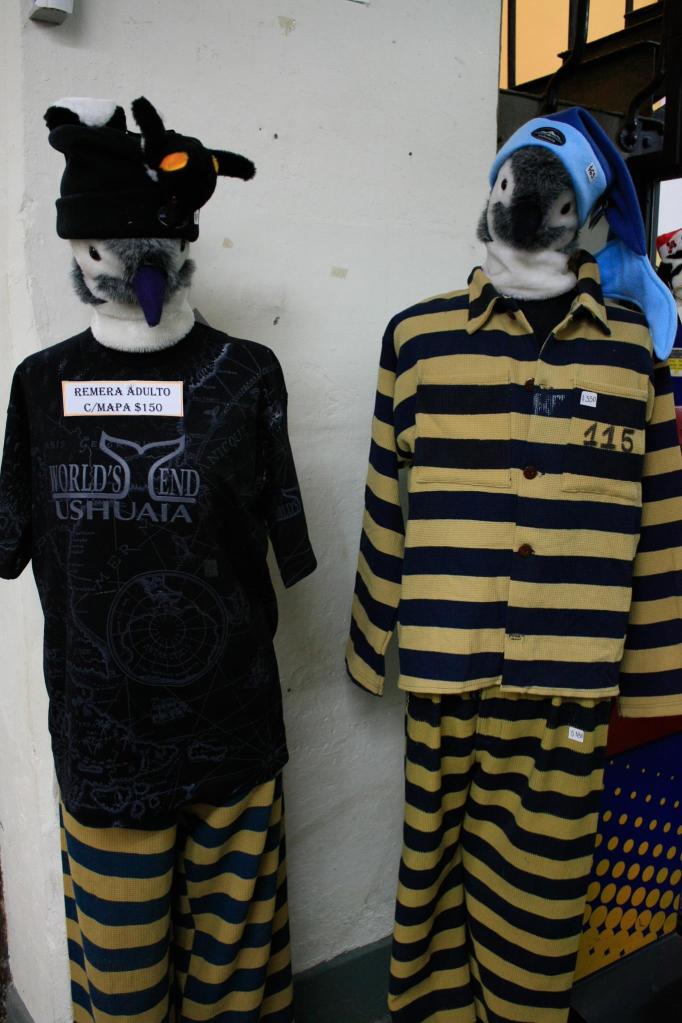 Each of the prison’s wings has been turned into another kind of museum. A section entirely on penguins, a section on notorious prisoners, a section on the Islas Malvinas (Falkland Islands) dispute with the British, a section turned into a fine arts gallery, with paintings in the cells…odd, but it’s really got its own atmosphere! I really fell in love with the art gallery, strangely enough – a lot of maritime art, a lot of penguins, Latin American cities, and the desolation of Tierra del Fuego.

And the gift shop? Oy. Penguins dressed in prison garb.

Today is my only full day in Ushuaia, so I headed off to Tierra del Fuego National Park for a long trek. I found two Brazilian teachers (Elto and Alejandro) and two Israeli girls (Ofir and Shir) who happened to be heading on the same trail as me, so we all did it together. But first, we went into their tourist office and got some commemorate “fin del mundo” stamps in our passports. Took up a whole page, and I’m running out of space…but there are penguins in my passport now! 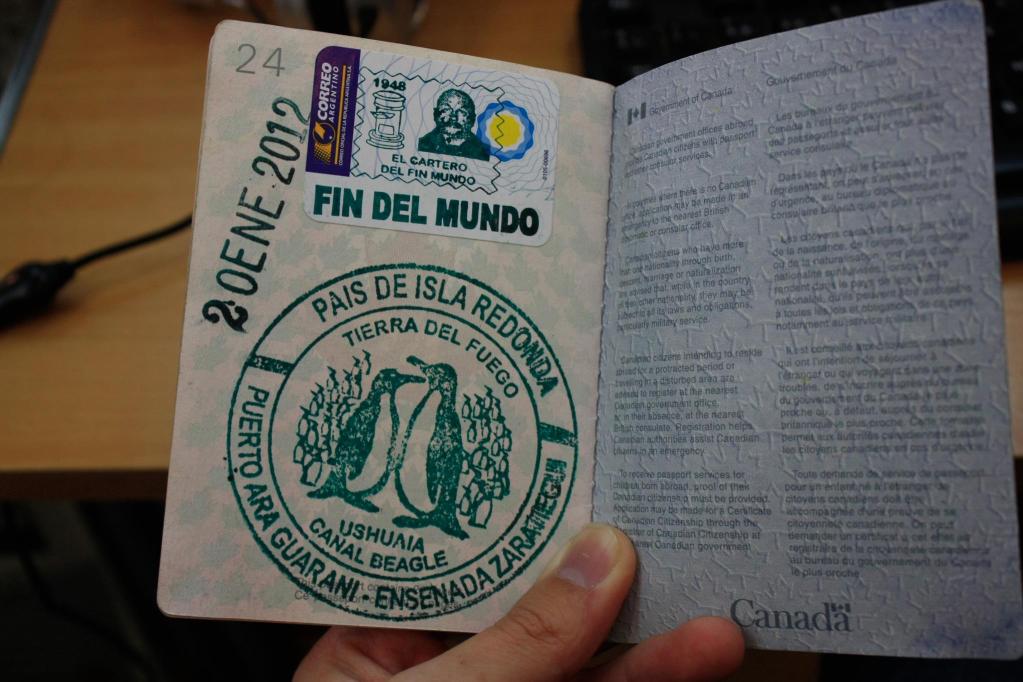 Being my first real exposure to Patagonia, the scenery was amazing! Verrrry windy though. But just huge mountains, a rough and wild channel of water (staring at Chile on the other end), and fields of brush and windswept trees – some growing sideways, and some just knocked over. The landscapes are large and the people are few. We spotted some wildlife as well – a falcon, a few woodpeckers. We went up and down hills, by the water, by fields…just a very pleasant walk in general, and it took us about 4 hours to go leisurely. Unfortunately, I didn’t bring any water or snacks, so by the time I reached the only place to get food in the park, I had to pay dearly. 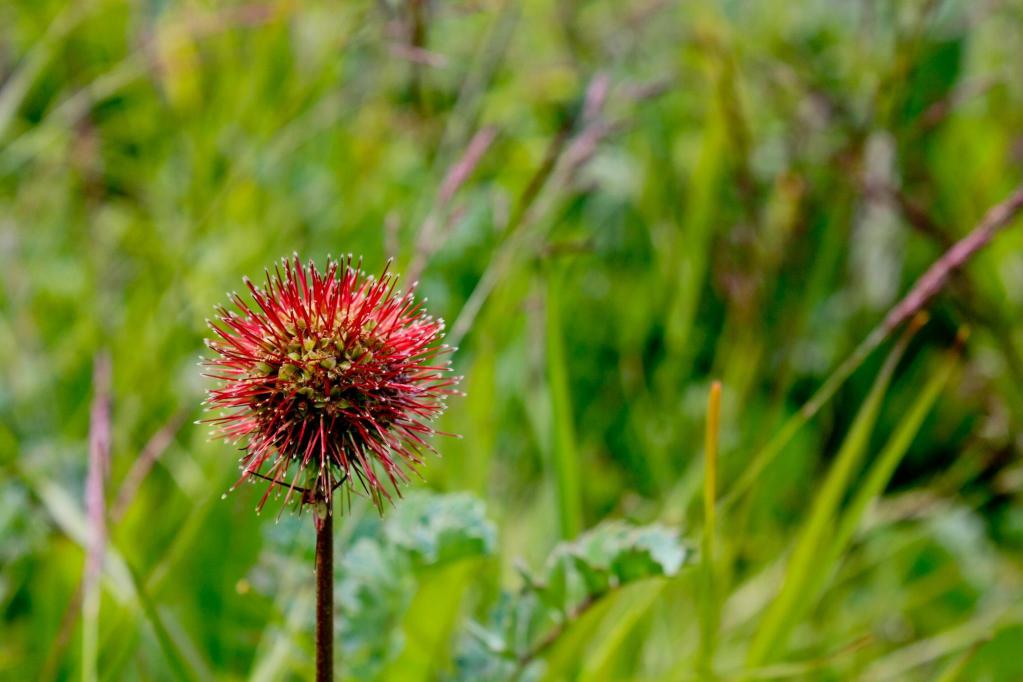 After returning to Ushuaia, I picked up my cruise tickets – still can’t believe it! I also got an upgrade…haha!

I’m out of time now, but I’m heading off for an 11 pm walk (in sunlight! And why 11? Because I can!) with Cindy before preparing for my Antarctic journey tomorrow. I won’t have Internet access until I arrive in Chile on the 28th, so adios for now! 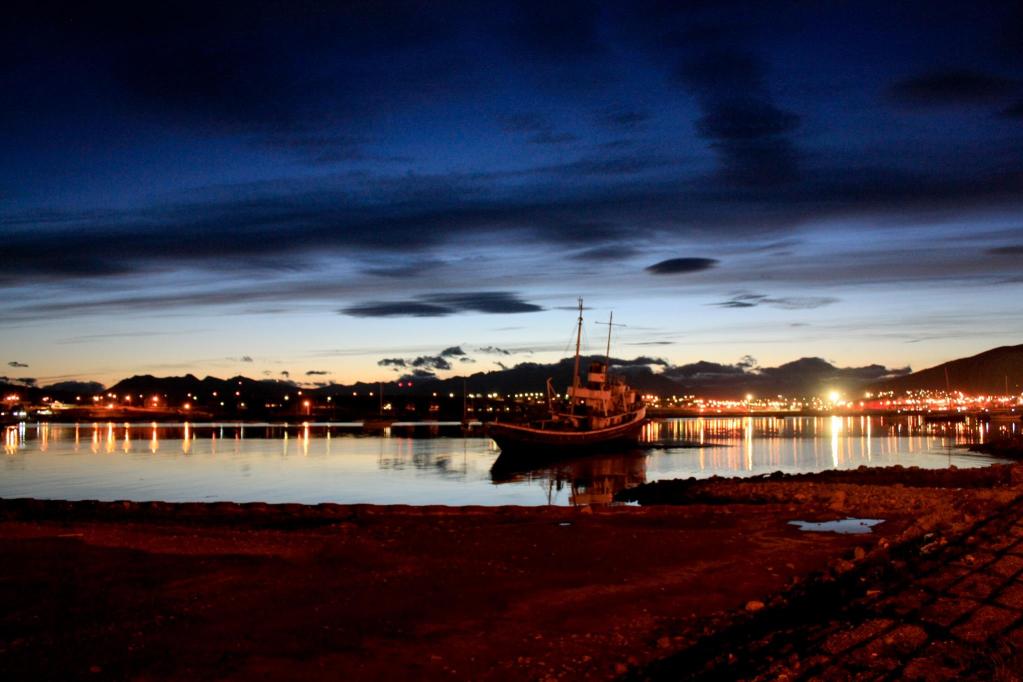 Edit Jan 21: All packed up and ready to go. I’m quite amazed how everything I needed to buy for Antarctica managed to fit in my 39L bag – a fleece, hat, two pairs of extremely thick socks I got from Neel and Gesine, gloves, balaclava, and snow pants. That’s another $140 of stuff right there. However, now I do need to make use of my day bag for real storage instead of just stuffing it into my big bag. The cost is one thing…but I hope I can get rid of this bulk at some point, since I don’t wanna carry it around for the rest of my trip!