Upon arriving at El Chaltén, Andrew and I had no hostel.  We made a little bet – I predicted being turned away from 4 hostels, he predicted 11.  Oddly enough, I was right – but we ended up at a pretty dingy place for the night.  We decided we would search for another hostel with openings for the next day, and buy some groceries for the hike tomorrow.

El Chaltén is a pretty small town, but it felt a little strange – nearly every single building was a hostel or something dedicated to tourism.  There were barely any houses, and barely any locals either – I could hear more Hebrew (and even see it – many signs, including official park trail signs, were in Hebrew) than Spanish!  The “super”mercados are something I would not call “super” either – every grocer was quite lacking, but that’s the case when you end up in an isolated town where you can’t even get cell phone reception with an Argentinian SIM card.  We find our next hostel, prep some chicken and avocado sandwiches for the next day, and have a wonderful Argentinian stew called locro (pumpkin, beans, meat, other yummy stuff) for dinner.

The next morning, after moving into our next hostel, we went for the trek to Laguna de los Tres, to see Cerro Fitz Roy.  After some heavy rain in the morning led us to sleep in an extra hour, we were pleasantly surprised when the weather changed completely for the better, with no trace of the storm from earlier.  The high winds here must make things unpredictable.

The Fitz Roy trek was gorgeous – it took us 7 hours to go, absorb the beauty of the peaks, and come back, over a distance of 25 km there and back.  Very grand scenery, and just a gentle slope (350 m) upwards for the first few hours – blue skies, big river valley, Patagonian steppe, tall grass, trees curled sideways and washed white by the weather – and the peaks of Fitz Roy were looming above, though one of the peaks just refused to emerge from the clouds.  The last hour up was a lot more rough – uneven rock steps for an hour and a steep slope (400 m), but we were rewarded with the best view, a turquoise lagoon directly in front of the peaks.  Similar to Torres del Paine, but I think better! 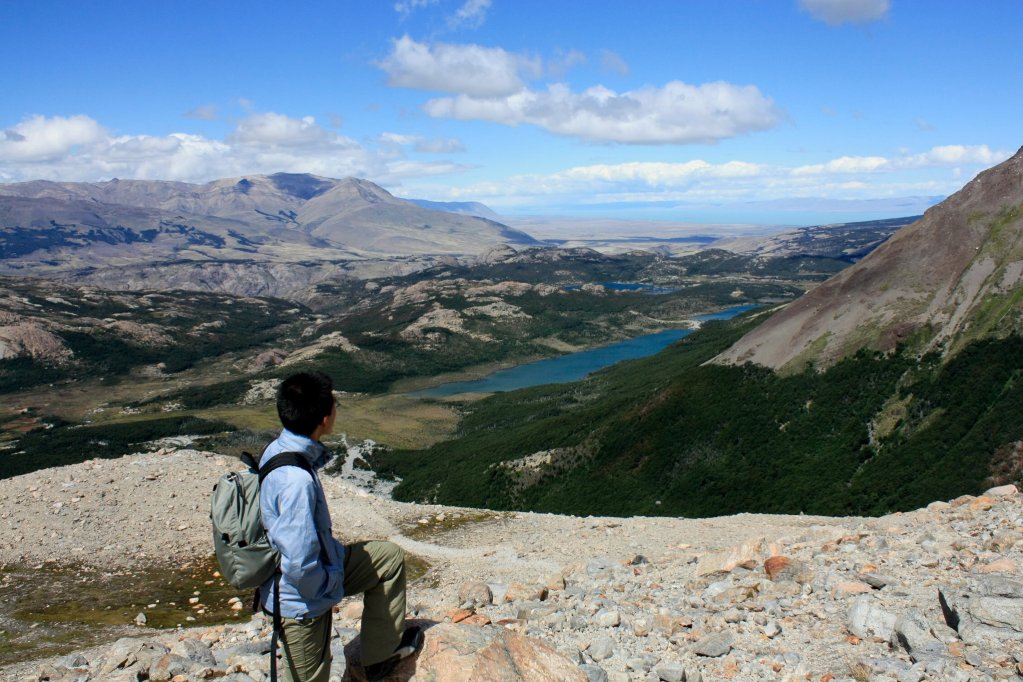 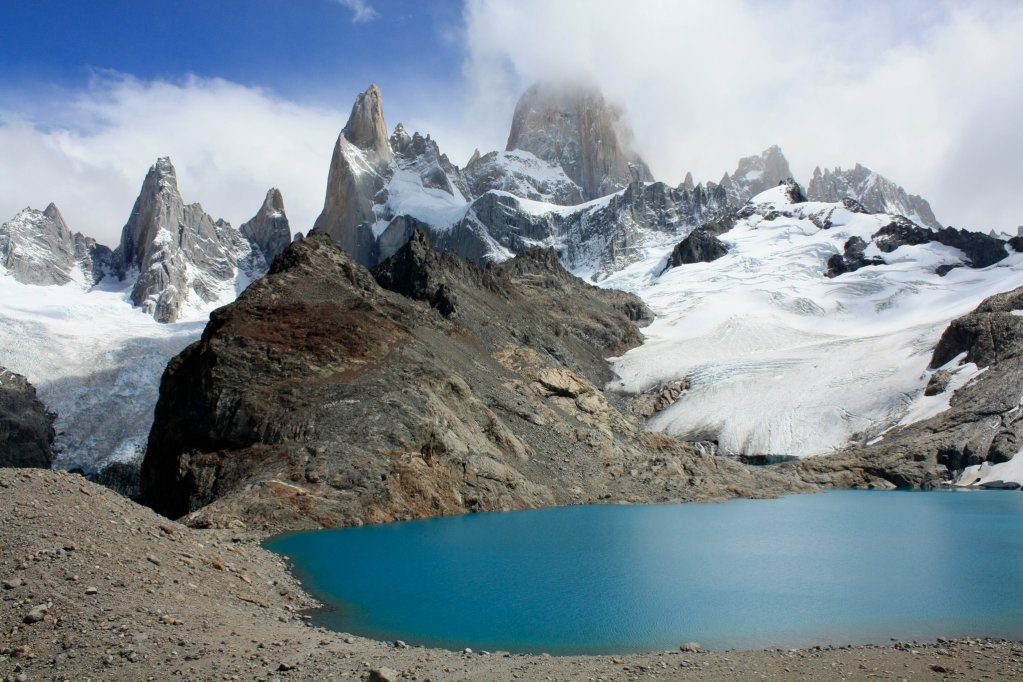 After Belén mentioned to me that calafate could be found on trails or in ice cream (which I had failed to try in El Calafate), I made it my mission to try some – after all, it must be good, if they named a city after it!  After about 6 hours of walking, I finally found some, and Andrew and I both went for it – uhh, eww.  Quite bitter.  We ended up spitting it out, but I was unsatisfied and needed to know why exactly this berry had appeal.

Also on the way back, a little recurring theme that started in India came back to haunt me.  It’s almost customary to say a friendly “hola” to everyone passing you by on the trails.  Well, I said “hola” to one guy and he said “konichiwa”.  Sigh.

After we finally made it back to town, I wanted some ice cream, calafate-flavoured or not.  But alas, we did find it!  The one ice cream place in El Chaltén, Domo Blanco, had calafate and a host of other unheard-of flavours.  And this calafate actually tasted quite good – not too sweet, just a little tart, but with a distinct berry flavour.  We were also joined by two Canadians I had met on the day hike in Torres del Paine – Ashley, who happened to be staying at our hostel, and Lisa, who also had a sudden ice cream craving and ran into us there – indeed, like I said at Torres del Paine, we did meet again.  (Seriously though, that ice cream was amazing.  Better than the gelato in Vancouver.  And that orange flavour…)

We really needed some rest that night.  Then for some reason, a drum circle started outside our window around midnight.  And then the whistles started, and it all seemed like a hilarious, elaborate ploy.  You know, like when you wish you could get a marching band to play to wake you up in the morning for that important exam or meeting?  Or when you wish upon someone to stay an insomniac forever?  Couldn’t stop laughing…

Well, that drum circle eventually stopped, and we woke up the next morning to wind and rain again.  After waiting it out a little longer than we had to the first day, we still had a mixed bag – high winds and a bit of rain, but we pressed on anyway to see Cerro Torres, on the Laguna Torres hike, a distance of 22 km there and back.  Fortunately, it was an easier hike than the day before, with less elevation to climb – Andrew had some knee pain and I rolled an ankle in the previous hike.  Nothing major for either of us, but nice that we could take it a bit easier. 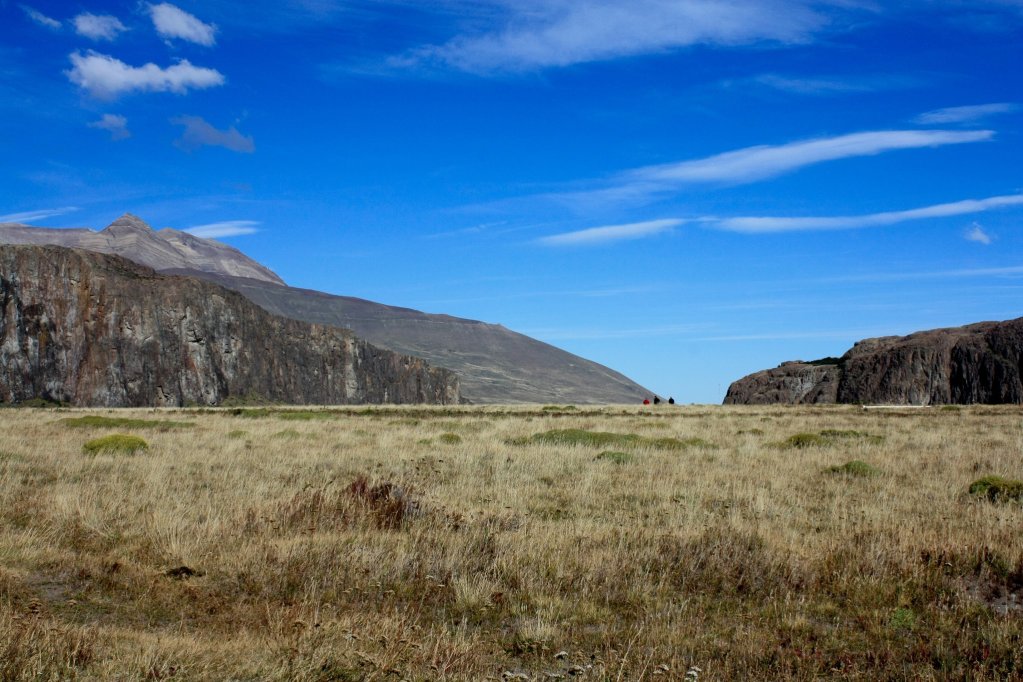 Unfortunately, the weather never did improve and Cerro Torres was shrouded in grey clouds for the whole day.  We did spend the hike sharing travel stories though – mainly from Andrew though, with his one year trip from Thailand to South Africa over land.  My short travels and stories can’t compare!  (Oh Aussies…you and your awesome working conditions that allow you to take leave without pay to travel for 3 of the last 6 years!)  The former Soviet “-stan” countries…intriguing enough to be on my bucket list now.

It was my final evening in El Chaltén (his second-last – off to Ushuaia after).  We celebrated our hiking success over more ice cream.  No more calafate flavour that night, but it didn’t matter – I had my 1/4 kg tub of three flavours to drool over.

Legend says that people who have calafate will return to El Calafate (well, I’d suppose El Chaltén as well) someday.  Well, I spit out the calafate I tried, but I ate a ton of that ice cream – where does that leave me?