Immediately upon arrival at my hostel on Feb 6th, I made another impulsive splurge – I really need to stop doing that, eh?  I booked whitewater rafting for the following day, having never done it.

In my dorm room of eight people, I met Renzo, a porteño on holiday with his friends Alejandro and Eduardo – all three were just a smidgeon younger than me.  Renzo spoke the best English out of the three, though I really was trying with my Spanish.  As seems to be a common theme with the Latinos I’ve met, they were all shocked that I was travelling by myself at my age and without fluency in Spanish, but appreciated that I tried.  (I guess they haven’t really been talking to other foreign travellers then, cause there’s plenty of people like me around, and plenty more that don’t know any Spanish!)  Within one minute, Renzo offered me mate.

Mate (sounds like ma-tay) is a very common drink I’ve been seeing for the past few weeks, and it seems that it is inseparable from Argentinians.  People carry around a gourd (itself called mate) made of wood, a pack of yerba mate leaves, and a thermos or pot of hot water.  Everywhere.  I’ve always been curious to try it, and to be offered some without any sort of prompting was a pleasant surprise. 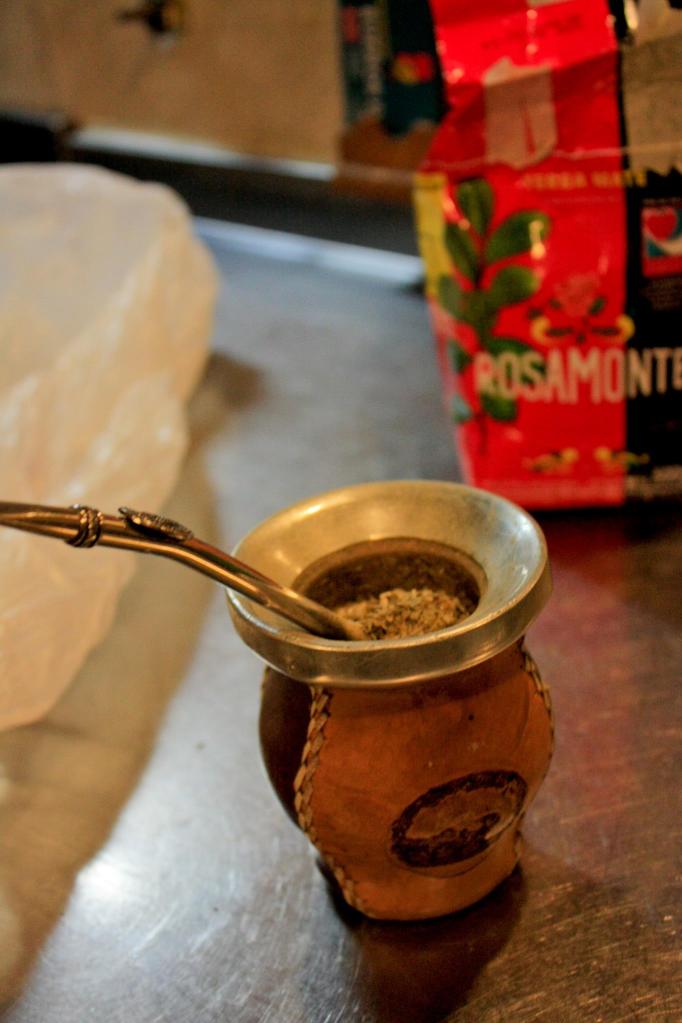 There’s some sort of procedure to it, and I prodded Renzo with questions.  The yerba maté is sprinkled into the gourd, which is filled all the way up with water.  I couldn’t quite understand everything he said, but I think they only serve it in the gourd because it gives it a certain wood flavour when steeped?  Boiling water is poured in sideways by the servador (Renzo in this case), then passed around to each person, who sips out of the bombilla (steel straw) until no water is left.  The straw sort of filters the mate leaves due to its shape.  The servador refills, then passes to the next person.  Continue until the pot of water is empty.

As if that weren’t enough, when they heard that I had just arrived, hadn’t eaten dinner (it was 10 pm, which is early for porteños!), and had no food with me, they offered up the pasta they were cooking.  Such nice guys. 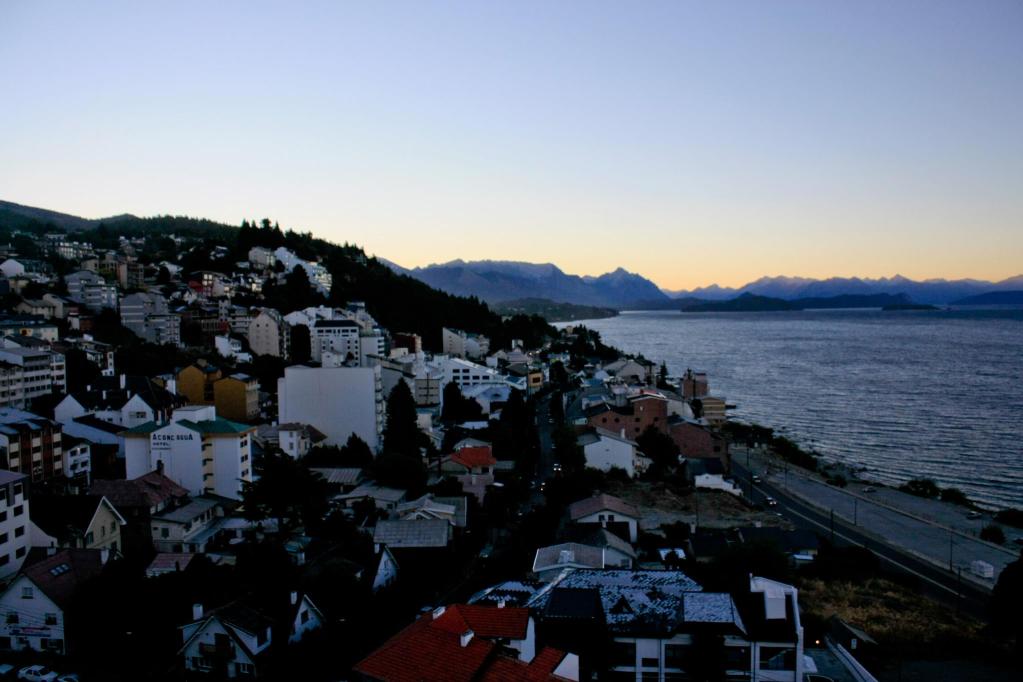 We spent the rest of the evening speaking in an awkward mix of Spanish and English, with Renzo as our traductor when one of us couldn’t come up with the right words.  I learned about their professions (Renzo’s a blacksmith who studies sociology, Alejandro works on window and door frames while studying acting, and Eduardo works with textiles while also being his own one-man-band).  Eduardo quizzed me on music (“Do you like Eric Clapton?  Red Hot Chili Peppers?  80s music?”) and sports (he’s a CARP fanatic) prevalent in Canada, while Alejandro taught me all about Argentinian politics (self-declared Peronistas and radicals) and asked me to introduce him to the boring world of Canadian politics.  They were all very well-versed!  They even asked me about the Occupy protests (“marchas indignadas”), and whether they achieved anything in Canada (short answer: no).  Somehow…Dragonball Z, “Los Simpson” and curling (they even remember the episode about the Vancouver Olympics) got into the conversation.

More intriguing was the topic of cost of living in Argentina and taxes.  Things are quite expensive here, with food more expensive than the US at times (especially if you eat out) and clothing as well, yet the wages are much lower.

The next morning, I woke up early for whitewater rafting, and was joined by Alejandro for breakfast – the other two couldn’t wake up.  They were planning to trek for a day, so we said our goodbyes until the evening.  Unfortunately, after I left, they decided on the fly to do a multi-day trek and checked out of the hostel, so I never did get to see them again!

So…rafting.  First, a two hour car ride down the way I came to the river.  Not so great after two straight days of bussing.  To make matters a little more awkward, I was by far the youngest, and the only other people who spoke English in the group of 9 participants were an Aussie couple.  The husband is a climate change activist of the extreme type – you know, chaining oneself to trees and all.  For much of the ride, he made a lot of good points about why we need to prevent climate change (and I agree), but…preachy.  Also, I got a little carsick.

We got all geared up and had our safety briefing while on the river, as the first few kilometres were calm.  Basically, the advice all just came down to “paddle hard”.  I was seated in front, and got very wet, of course!  As fun as it was, the rapids were really not that difficult though, which was a tad disappointing – turns out they were just Class III.  I’m being a bit mean, but the best moment was when one girl from our boat of five tipped right out of the boat mid-rapid and had the perfect scream. Priceless…especially the photos and videos which were played back to us after.  (I didn’t buy them though, so no photos for this excursion!)  I also opted to jump into the water and float down a gentle rapid – fun, but a little cold.  We finished rafting just across the border in Chile, without going through customs.  Must be the strangest border crossing I’ve ever done.  Also, illegal…?

After the rafting, we had an all-you-can-eat asado.  Mmmm.  Overall, I think I spent a little too much on this excursion for what I got out of it, but I had fun.  Maybe next time I’ll try to find something a tad more difficult.

That night, while relaxing at my hostel, I met Cécile and Estelle from France, and Dale from Nova Scotia, after hearing them mention their experiences at some destinations I’m considering for the coming weeks.  (Also, Dale has been backpacking almost once a year for two or three months at a time for like 30 years!)  Free dinner number two – Cécile and Estelle had some leftover ravioli that they didn’t want.  I was very grateful. 🙂

The next day, I intended to wake up early to take the 8:30 bus to do the Cerro Catedral hike, which Andrew had recommended.  Instead, I woke up at 8:40, and the next bus wasn’t till 10!  Nonetheless, I went for the 10 o’clock bus, which arrived 20 minutes late.  Who else did I run into on the bus than Estelle and Cécile?  We decided to hike together for the day – they had found a different trail going down that would also pass by a nice little waterfall.  So we decided to go up via the Catedral/Refugio Frey trail (10 km, 700 m, 3.5 hours), and down by the Gutierrez trail (12 km down, 3 hours) to pass by Cascada de los Duendes.

On our way up, we saw that the military was training by doing the Refugio Frey hike with heavy packs!  We resolved to beat them to the top, given that we were barely carrying anything.  Thank goodness we did…but not by too much!  The hike up had plenty of variety – bright flowers, petrified wood, a lake view, then forest providing much needed shade, then rocks…  Like Cerro Torres before though, the hike was the hardest and steepest at the last little stretch. 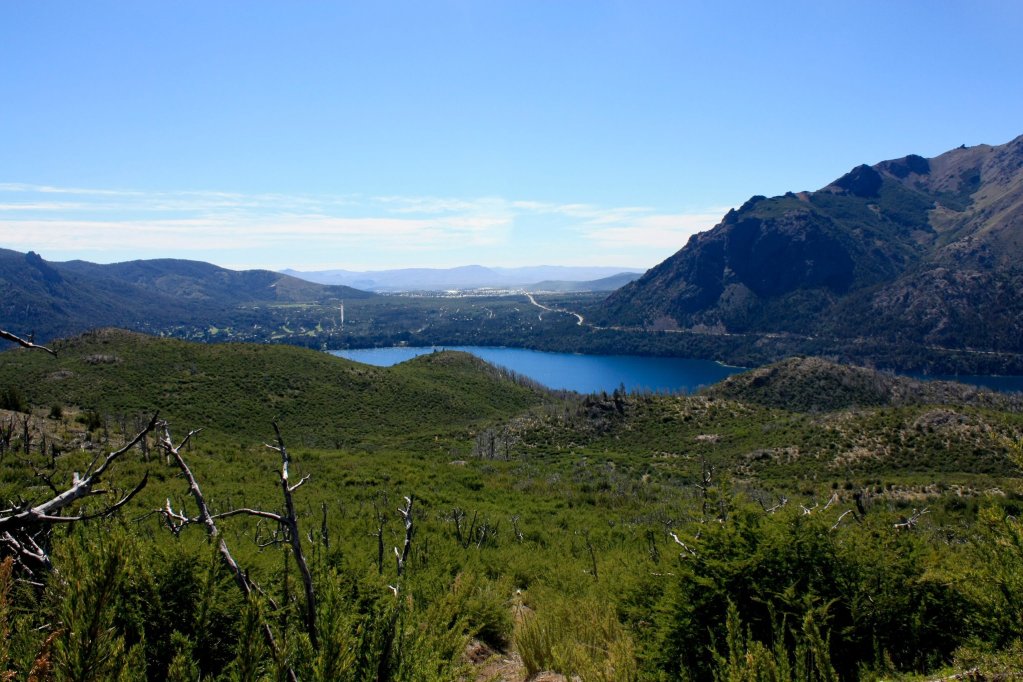 We reached the top, and Catedral indeed – the peaks do look like a cathedral.  Again, a little similar to Cerro Torres, complete with turquoise lake in front.  We dipped our feet in – coooooooold.  Over our pack lunch, we enjoyed the view, the little bit of wildlife that wasn’t bees or flies (some birds, a frog), and watched in astonishment as a group of people attempted to climb up a very steep peak near the lake. 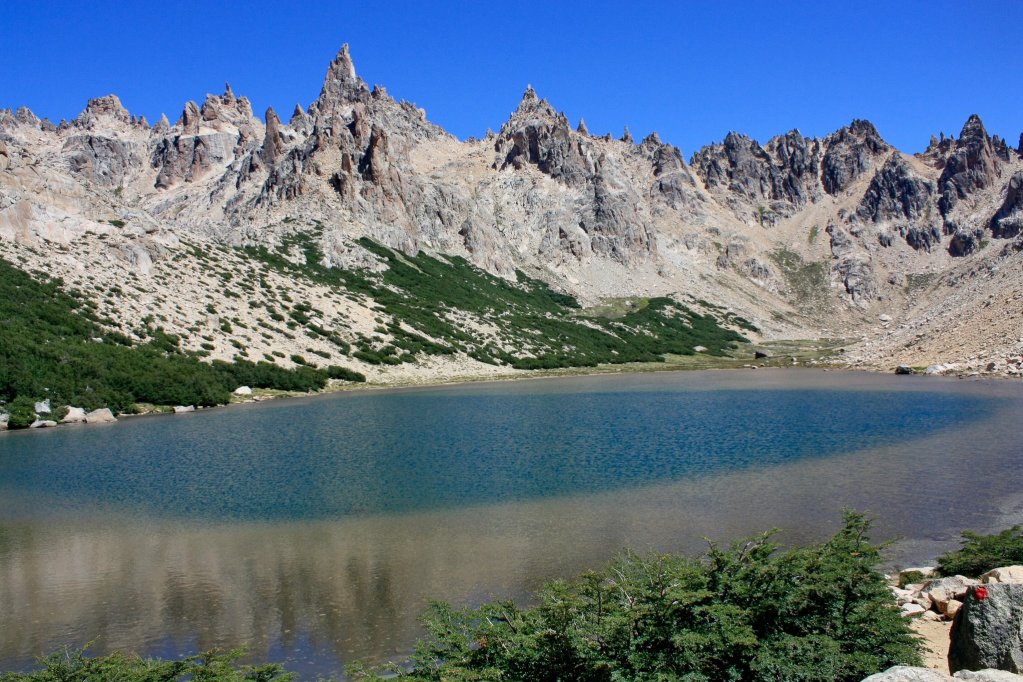 It was a steep walk down Gutierrez – we were glad not to have gone up that way, as we flew down.  There was all sorts of trail construction going on too, a constant reminder of how much work it takes just for us to have a pleasant walk.  After reaching the waterfall (turns out it’s two mini ones), we were dead tired after almost 7 hours of walking, yet we had another 40 minutes or so before we would reach any buses…

As Cécile and Estelle say though, this is where girls have a massive advantage!  We hitchhiked with a young couple visiting from Buenos Aires – the first people they asked.  Though they weren’t intending to head back to Bariloche, they changed destinations just for us!  (The guy: “You hiked 7 hours just to see more mountains and lakes?  They’re everywhere here!”)  Super nice people…shame I never got their names.  I learned a few things though – Argentinians can really dance, since they start going out to the clubs when they’re 13!  The party starts at 2 am and doesn’t end till noon.  We also appreciated learning more about what Argentinians think of their country and their economy – a little more about unsustainable inflation in the face of low salaries, but in a country that nevertheless has plenty to offer.

Bariloche is famous for being the Switzerland of Argentina.  (Or the Whistler of Argentina, to a lesser extent – it’s the ski capital in winter, but a hiking destination in the summer.)  Aside from the main streets crowded with stores looking like Swiss chalets with staff dressed in German style clothing, every other store seems to sell their own chocolate!  After the long hike, we decided to reward ourselves with the specialties of the region.  Estelle had a hot chocolate with quantro, Cécile had a hot chocolate with cognac, while I went for a 1/4 kilo of helado (what else after a long hike?!).  Orange, cassis, and chocolate…that was possibly more amazing than the helado in El Chaltén!  We all sampled each other’s treats, and I think I could really stay in Bariloche for awhile, given how luxurious and affordable it all was.  One of the few things we found for cheap, at 18 pesos ($4) each!  We were full already, but then topped it off with a lovely DIY dinner of wine from Mendoza (Argentina’s city most famous for wine), cheese (yes, very French sounding already), ham, olives, ravioli, melon, and more chocolate, over our hostel’s panorama view of the city, our stories of travel, and our motivations for traveling.  A long but lovely day!

Cécile and Estelle left the next morning for Mendoza, so I had the day to myself.  I spent the morning being stupid and walked a lot more than I needed to just to book my bus tickets for the next day.  After that, upon Cindy’s recommendation on Facebook, I decided to head to Cerro Campanario.  There’s a little ski lift there you can take for 50 pesos – no way!  The hike up was very very steep but also very short (I was quoted 45 minutes but it only took 20), and the view at the top was stunning – tons of lakes everywhere (this is the Lakes District after all), forests around, mountains in the distance.  Lovely weather too, although a tad hazy due to the smoke from a nearby volcano that’s been erupting for the last six months, but totally worth going up for. 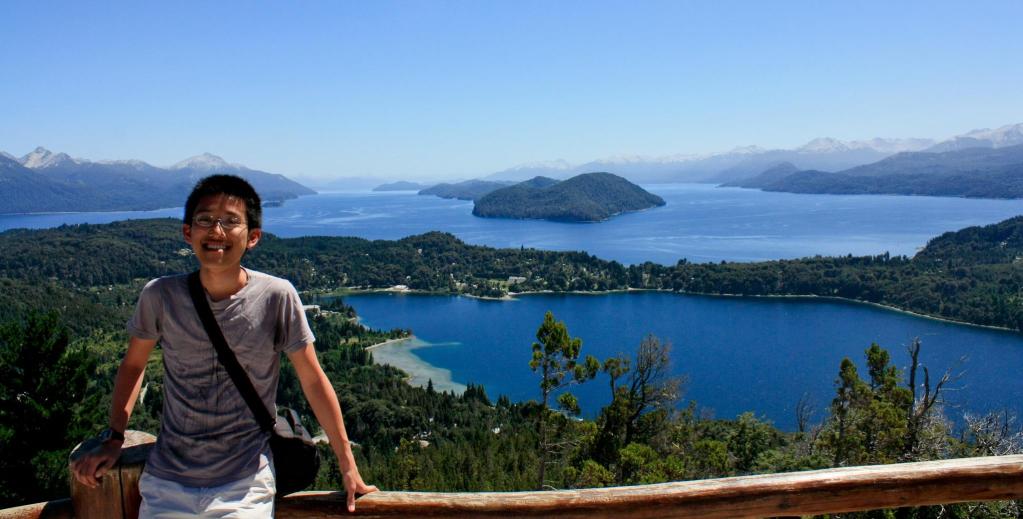 I think I’ve sampled a little of just about all the specialties this region has to offer, and I couldn’t be happier!  Next up – going back to Chile!  (But first, I’ll make myself some dinner and grab some more helado…)