One month on the road now!

It seems that I left Bariloche at a good time – by my last evening and the next morning, the volcano smoke returned and the view disappeared.

On my buses to Pucón via Osorno, I ran into Ofir and Shir, the two Israeli girls I met hiking Tierra del Fuego several weeks back.  We all had a rather comical bus ride – customs control entering Chile is very strict, and does not allow meat, vegetables, or dairy.  All of us had packed such things in our bags, intending to eat lunch on the bus – but we were due to cross the border before noon!  In order to not waste our food, we ate as much as we could before making it across the border.  The bus company also provided everyone with a light meal of pastries and a cheese sandwich – somehow we managed to not get that confiscated from us at the border!

The ride between Bariloche and Osorno was a bit surreal – volcanic ash covered trees and hills like snow.  If I didn’t know it was 25º outside, I’d think it’d have actually been snow.  The ride from Osorno to Pucón was clear but uneventful – our bus did pick up a ton of hitchhikers from the side of the highway though.

Pucón is a very touristy town – it’s packed with Chilenos on vacation at this time of year, and they’re all out partying on the main streets or on the lakeside beach.  I ended up in a room with a few of them…and their drunk snoring was so loud that I never got any sleep the moment after they went to bed!  (After they found out a couple days later that they were keeping us up, they were extremely apologetic.)  They’re all nice though.  A touristy town also means things tend to be a bit expensive, but there’s plenty of novelty food about – I had my first burrito in foreeeever for dinner.  Mmm.

Other than partying, which really isn’t my thing, Pucón is all about adventure activities.  Very early the next morning, despite having little sleep, I headed onto a tour to climb volcano Villarrica, which towers over the Pucón skyline.  I joined up with Dominique (Switzerland) and Rachel (UK/Australia) from my hostel to join a tour.  We were in a group of 14 and all fitted with gear – waterproof pants, windbreaker, ice pick, gaiters, hiking boots, crampons, and a funny looking plastic pan-shaped thing…

Villarrica (2847 m) is an active volcano that last erupted in 1984, and is still smoking.  Safe to climb up to the top though, which is what we did!  But I had to cheat a bit – having no sleep, I opted to take a ski lift up a few hundred meters rather than hike an extra hour.  Our tour group was thus split in half – those who took the lift, and those who didn’t.

It was a pretty easy walk up, but you know what happens when you’re in the group that takes the lift… One girl was really struggling.  (She was really nice though – turns out she’s from Burnaby and loves my dad’s restaurant!  Ha!)  We went so slow that the group that didn’t take the lift caught up to us!

The hike was uphill the whole way but not steep, and the landscape was nothing but volcanic rock for the first two hours up, then ice for the next two – those ice picks really did come in handy, but the crampons weren’t necessary.  Everytime we stopped we’d look down at the landscape below – tons of lakes, a few towns, one town and a ski lift destroyed by the volcano in 1971, and another volcano in the distance.  I had to use provided sunglasses instead of my own glasses though, which meant I couldn’t see all that much – whether hiking or taking in the view!

At the very top, I finally did put on my glasses and really took in the view – we were lucky to have a clear day, and we were even above the few wispy clouds that were there.  Unfortunately for us though, wind was blowing smoke out of the crater, which made it a bit hard to breathe, and the inside of the crater was thus not visible.  We did get to walk right around the top though! 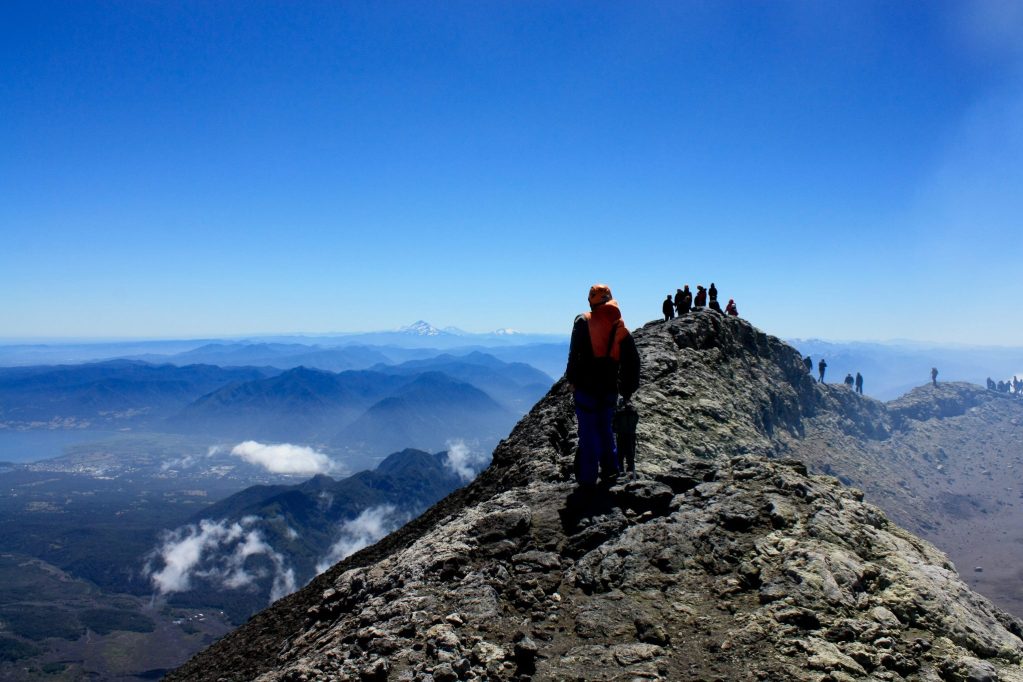 Now the fun part – what comes up must come down, and we did go down…on our bums!  After putting on extra waterproof gear, we were instructed to just sit in the snow or sit on those plastic pan-shaped things, and just zoom through some semi-natural “slides” in the snow.  They did teach us how to break with our ice picks, but it really wasn’t necessary…despite all the extra gear, snow got into our boots and pants and did all the slowing down for us.  (I had on three pieces of waterproof clothing for my legs, and my underwear got wet!  And despite the gaiters, I ended up with a big puddle inside each of my boots by the end.)  Slide after slide after slide… it took us over an hour and we must’ve gone down at least a kilometer of distance.  We couldn’t slide ALL the way down though – we did have about another hour’s worth of distance to cover on foot.  Altogether, it was quite exhausting – the sliding meant keeping your legs up, which was difficult, and the running down was on a steep and dusty hill. 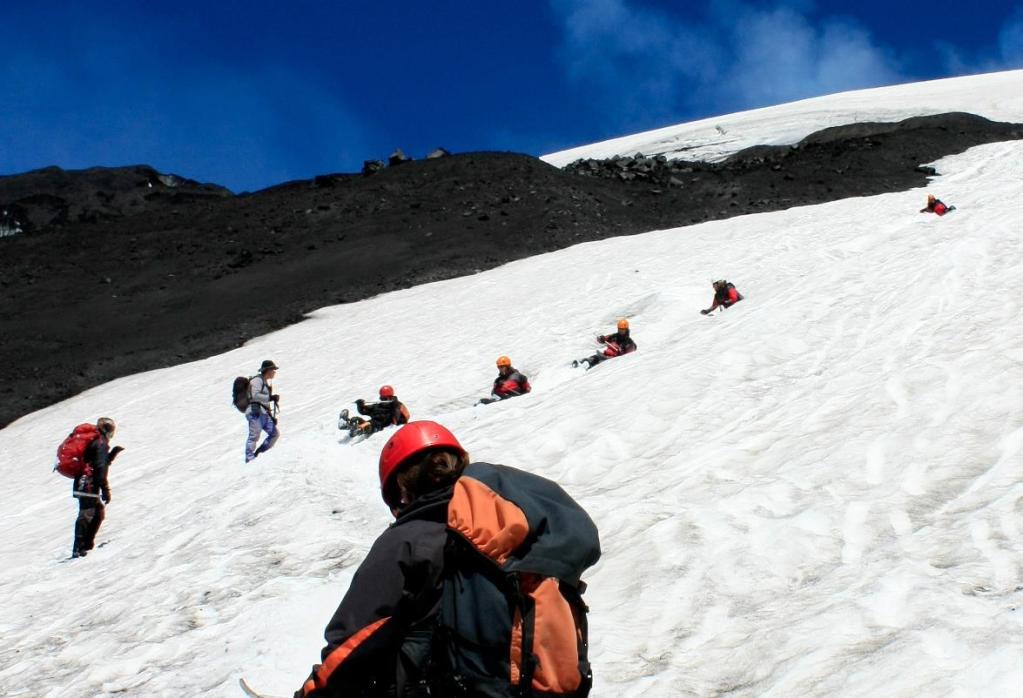 This would be more than enough for a day, but I still had some energy in me – after returning to the hostel, I headed to the lake two blocks away.  Wasn’t quite my thing though – the black sand was coarse, the water a bit brown, and the beach entirely crowded.  At least my hostel has a pool!

To make things more awesome, the hostel hosted an asado that night for super cheap.  Dominique, Rachel, and I met a young couple my age from Concepción – Loreto was on school holiday, and Rodrigo on work holiday.  Loreto is studying translation – she speaks Spanish, English, and German – so it was really nice to finally talk to a Chilena without any language barrier!  We had fun teaching each other a few phrases in other languages, but it was very nice to get a perspective of Chile from a national.

She talked in length about the student protests that went on for 7 months last year: originally peaceful, they turned violent when the government decided to crack down.  Tuition runs about $8000 a year, which is a lot (even for Canada!), especially considering the lower salaries here. Their situation seems dire – their cause was championed by a very photogenic girl student, who managed to get the attention of the media.  But her loyalties lay with the Communist Party of Chile rather than just with her fellow students, and while students have paid for but missed 7 months of class or lost an academic year entirely, leaving them in worse financial straits, this girl was paid by the party and is off vacationing somewhere in Europe.  And though the cause was taken up by opposition parties, the students don’t know who to trust – politicians are always the same and say what people want to hear.

She also mentioned the big 8.8 earthquake that happened several years ago, which had its epicentre in Concepción.  (She remembered thinking that her life was about to end, as the shaking was for three whole minutes.)  The rebuilding has been slow.  Nevertheless, it is sobering that Chile does lie on the Ring of Fire, and has five active volcanoes (or some similar number) which are near settlements.

The discussion wasn’t all depressing though – we had a wonderful few hours talking (and Rachel also confirmed with Loreto that the Spanish equivalent of “see you later, alligator” is “chao pescado” with a silent d, or “bye fish”), and she and Rodrigo got me to try some piscola (pisco with cola).  I was reluctant as I usually am with alcohol, but I’ll admit it was alright!

The volcano was the only thing I wanted to do in Pucón, and I had originally intended to stay for two days (leaving Sunday).  I went around town trying to book my passage out, but couldn’t find anything that wasn’t prohibitively expensive!  My only option was to leave Tuesday…which meant that I suddenly had a ton of time on my hands to take it easy. 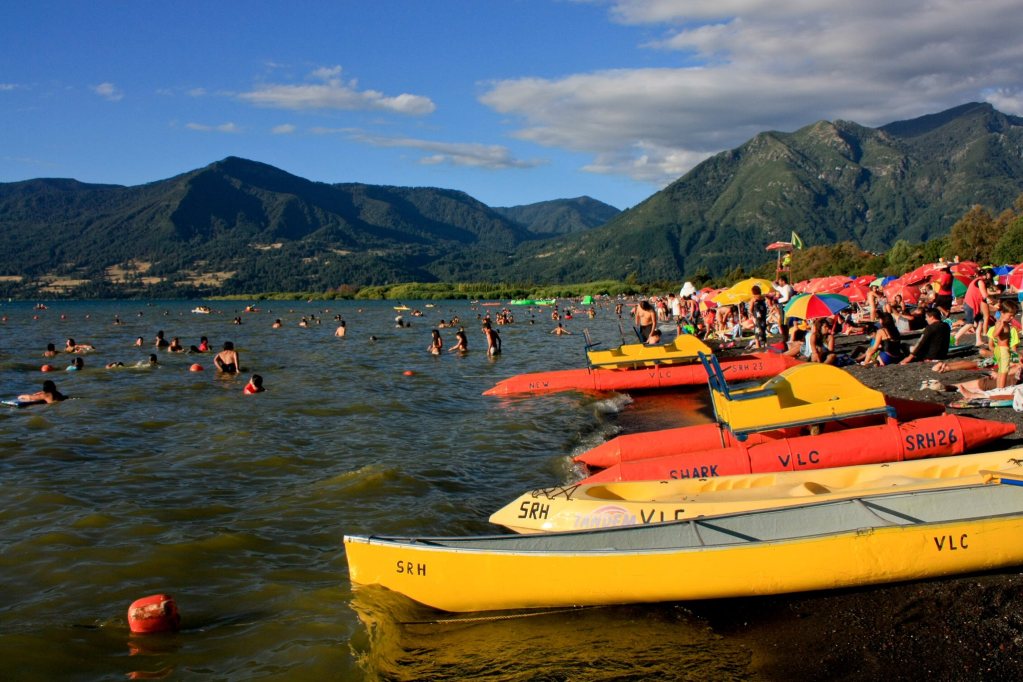 Sunday was absolutely lazy – after a nice filling vegetarian meal (absolutely necessary after eating only meat and more meat the night before), Rachel, Dominique, Bridget (Australia), and I headed to the nearby lake, then I soaked in the hostel pool for a bit.  It’s quite hot up here, and it gets hotter the further north I go.  After nightfall and the temperature cooled down a bit, Bridget, Kevin, Zach and Henry (Boston), and I soaked some more at the nearby volcanic hot springs under the glow of the Milky Way, pointing out the constellations.  Wonderfully relaxing, especially after we found our favourite of the six pools – one side scalding and one side comparatively cold, we could mix our own temperature!

It’s really only after I’ve had such a lazy day that I’ve realised how much I needed it – after Antarctica, it’s just been go go go go go and I’ve covered nearly 3000 kilometres without skipping a beat.  Having a day just talking with new friends, reading a book, sleeping in, and just relaxing really helped me feel normal again.  It sounds odd, but most of the time, travelling really isn’t vacation even if it is fun – it’s tiring, it can be stressful especially with transportation and language and chaos (and the hostel, even though I liked it a lot – my booking was messed up and I had to pack up and move rooms three nights in a row), and you often do strenuous things every day…like hike seven hours or climb a volcano or go rafting or something.  Really nice just to take a break, and to be reminded to do so by my unlucky bus situation at that.  Going to new places isn’t just about checking things off a list.  (Also, if I did do some crazy activity every day, as is entirely possible in Pucón, I’d go broke verrrry quick!) 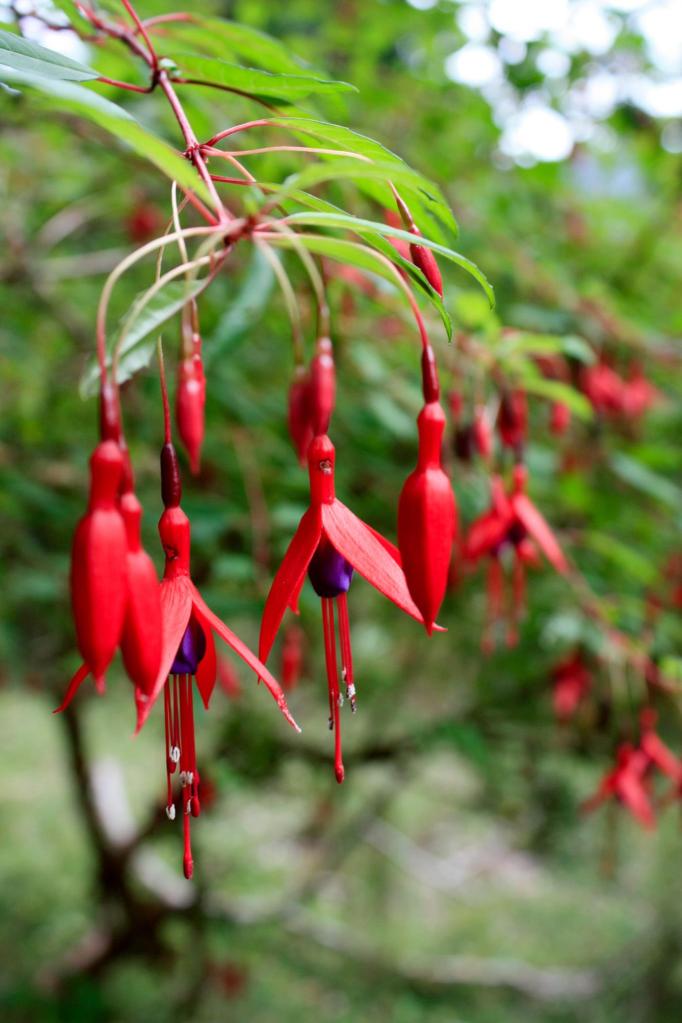 Monday was a little less lazy – after my usual homemade lunch of two ham, tomato, and avocado sandwiches (oddly enough, it tastes like sushi whenever I make it), Kevin, Jake (California), and I headed off to Huerquehue (say it with me now: where-kay-way) National Park and did some hiking.  This hike, my last for the next little while, really was quite different from the rest I’ve done.  For one thing, given the temperature, we were really sweating after the uphill climbs.  But the forests were fragrant, the lakes (Lago Chico, Verde, and del Toro) shimmering green, the waterfalls larger, and the trees and plants different.  Plenty of bamboo around for some reason, but also the vulnerable monkey puzzle tree lined the hills.  Our reward?  Another splurge at that amazing vegetarian restaurant after. 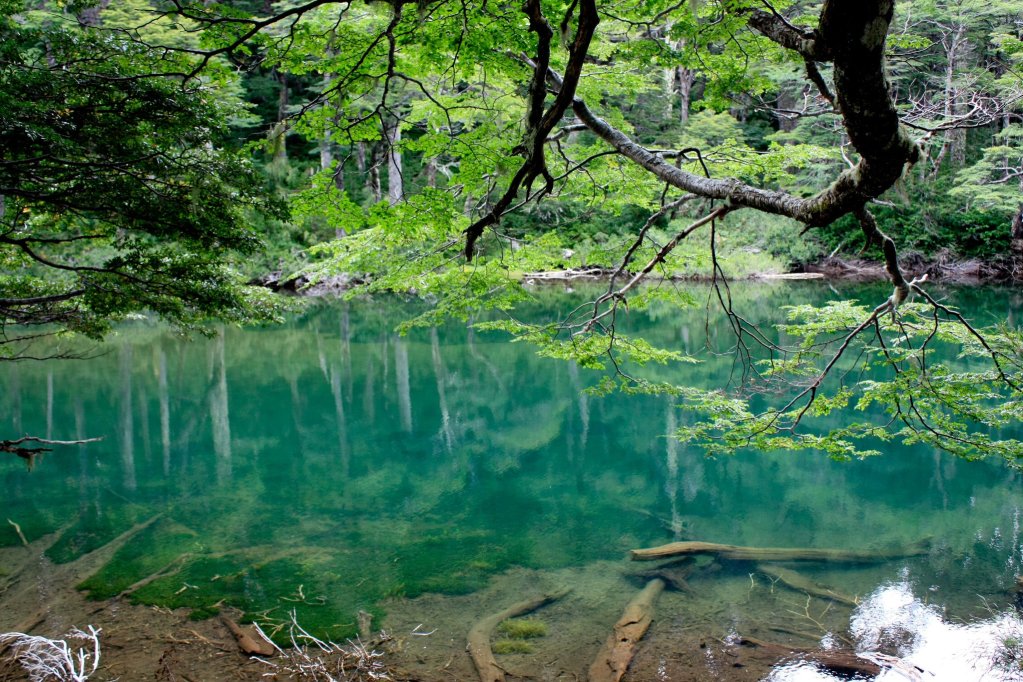 Now, Tuesday?  Lazy beyond lazy – I’m literally doing nothing but sitting by the pool and reading today.  Better enjoy this easy pace while it lasts – back on the bus tonight…