Back in the big city – and this one could very well be my favourite of all time. 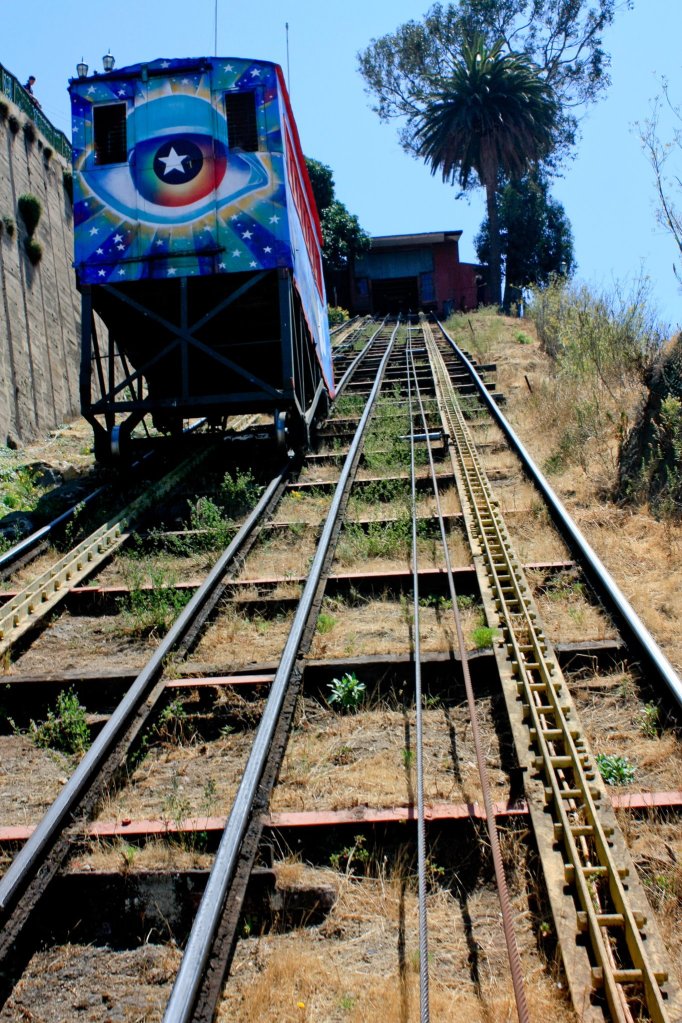 Valparaíso is a study in contrasts – upon arriving, it seemed gritty and run down.  El Plan, the only section of town that isn’t hilly, clearly bears the signs of decline.  I was even told explicitly to avoid some areas.  But after taking my first of many ascensor (funicular) rides to my hostel in Cerro Alegre, there is a dramatic change in scenery – and the fact alone that I had to take a funicular obviously sticks out.

I had to wait 40 minutes for someone to open the door to my hostel, but despite carrying my pack, I couldn’t just sit there – the scenery around me was just too beautiful!  The hills go up and down, stairs everywhere…and the houses, so stately and colourful!  Graffiti of the good kind everywhere – wonderful, whimsical street art on every other building, pastel colours and flags and cafes abound.  Even the concrete stairs are painted.  Buildings of all shapes and sizes competing for their own space on the hills.  And in one direction, it’s all uphill.  In the other, it’s the sea – the Pacific Ocean. 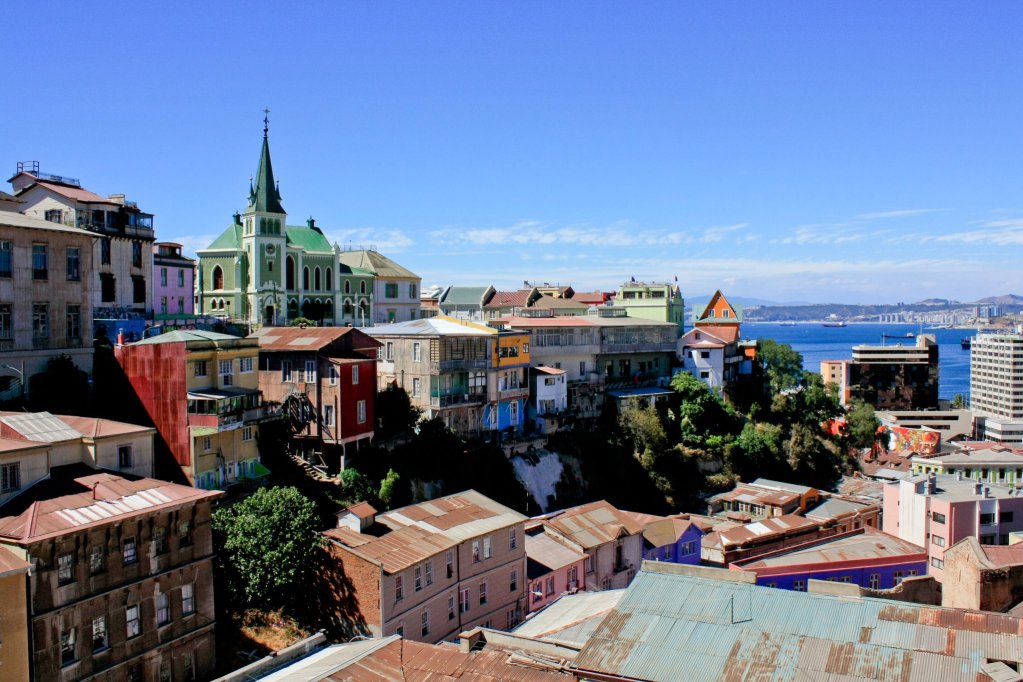 After finally checking into my hostel, receiving a map, and heading to the tourist information booth near El Puerto (a port full of people, boats, and pelicans), I basically went wild.  First, a walk to Cerro Artilleria.  To get there, a funicular.  This one had a huge line since it was really touristy…but it was totally worth it for the view at the top!  Atop the hill on the south side of Valparaíso, I could see the entire city, along with the neighbouring city of Viña del Mar, its suburb Reñaca, some giant sand dunes, and the village of Concón.  And of course, the panorama view was an explosion of colour. 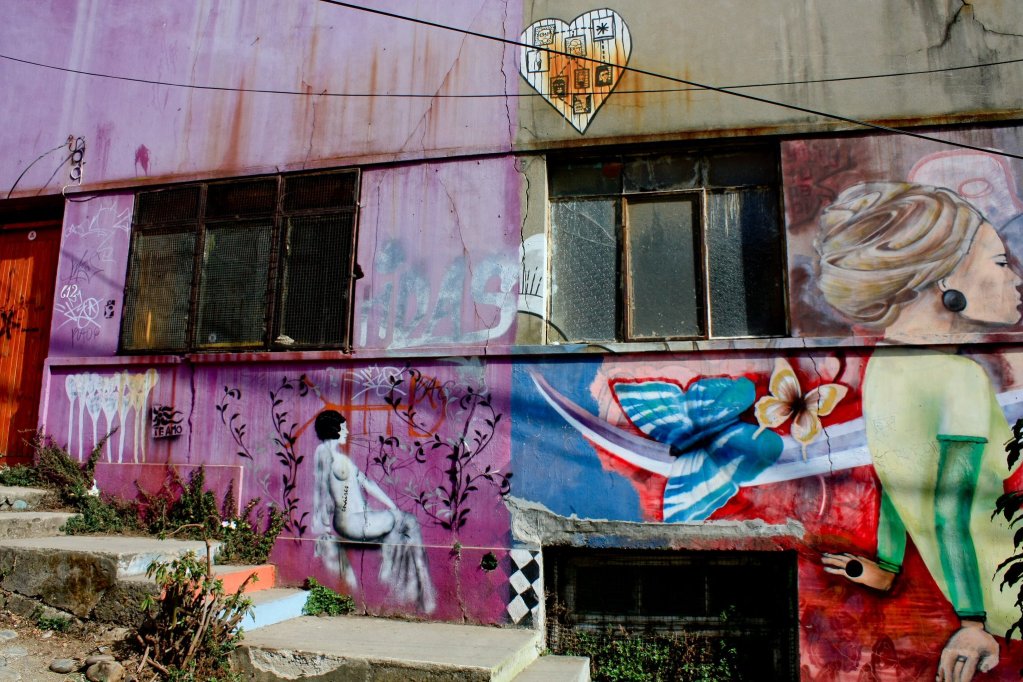 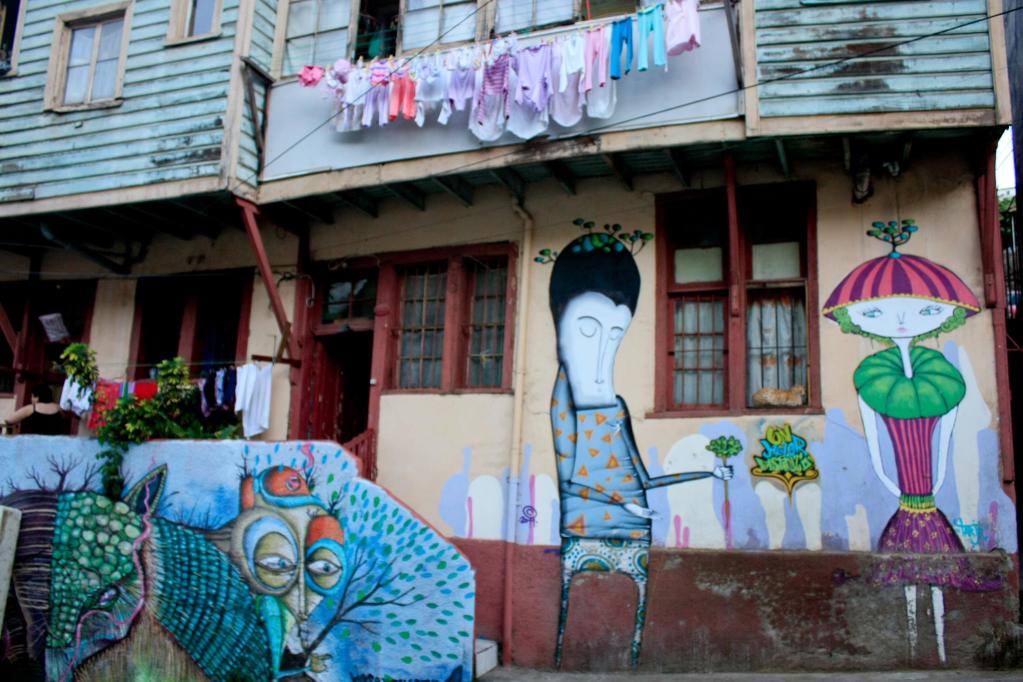 Given that Valparaíso is a port city and Chile’s most important naval base, I opted to check out the museum beside Ascensor Artilleria.  Unfortunately…only about 30% of the exhibits had English translations.  Oops!

I then headed to the center of town, Plaza Sotomayor, and joined a free walking tour.  There were some very interesting things I would never have found out – Avenida Serrano had some restaurants which were destroyed in the earthquake of 2010.  The government opted to put six of those vendors under one restaurant, and each mini-restaurant operates based on the colour of the tablecloth!  The court house has a statue of Lady Justice, of course…but a closer look reveals that she is not blind, and she’s nonchalantly carrying the balance on her side.

We learned a bit more about the history of the city, which was built more out of necessity rather than planned as a city.  The port is landfill to accommodate all the ships.  The city boomed during the California gold rush, as people had to sail all the way down to Cape Horn and around, using Valpo as a stopover.  Many immigrants from Germany, UK, and Italy stayed as a result, and their influence is clearly reflected in the architecture of the city and at how many things are named “Reina Victoria”.  There are several volunteer firefighter groups – each ethnically based, with the tradition carried down from the immigrants those hundreds of years ago.

The city started to decline after the Panama Canal was built, but it’s on the rise again as the culture capital of Chile.  It’s easy to see the former glory by just walking around, and the clear love people have for the city – so much graffiti and art just based on Valparaíso itself.  There’s still a long way to go though.  Due to all the steep hills in the city, walking inclines all day really isn’t so appealing, so nearly 30 ascensores were built.  However, they’ve become increasingly rundown, and only five run today.  They’re super cheap (100 to 300 pesos, or $0.20 to $0.60) and actually public transport though!

As for the reasoning behind the colours of the city, it’s to do with being a port.  As ships can never carry no cargo, some brought with them random garbage, like sheets of corrugated metal and cans of paint.  And what colours are ships usually painted in?  Bright ones.  People took these and the sheets of metal and just basically threw them all on their houses.  Good deal. 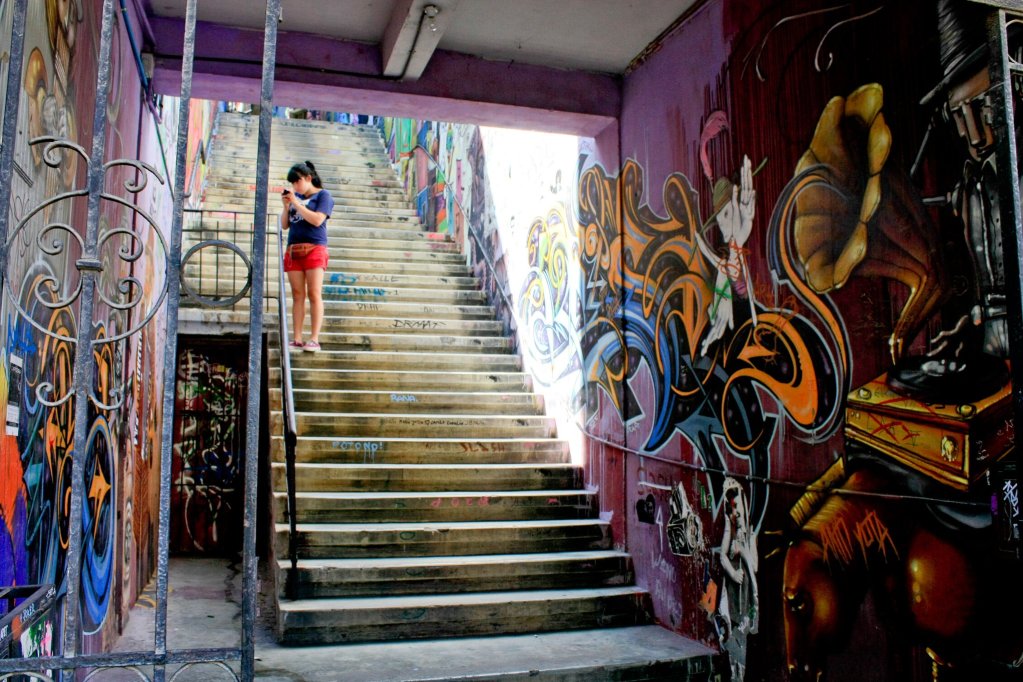 The graffiti thing wasn’t quite explained clearly to me, but I think it’s got something to do with the decline.  You can see plenty of buildings, especially in El Plan but also in the cerros, covered in ugly graffiti.  But street taggers have an unspoken pact – they will never spoil a piece of art.  Thus, people hire artists to make street art on their buildings!  It’s everywhere, from houses to cafes to giant apartment buildings, to the point where you can see the art even if you’re miles away and standing at a mirador.  Such a beautiful solution, and one that gives the city its unique character.

The walking tour ended at el Museo de Cielo Abierto (Museum of Open Skies) – a section of town covered in very nice art.  After ending off with a pisco sour each, we split off.  I met Simone from Italy on my tour, and he was heading to a movie being shown that night for free at Plaza Sotomayor.  I resolved to meet him there, but never found him – instead, I joined Pearl and Edwina from Toronto, who were also on my walking tour, as I ran into them on the street heading the same way.  Interesting movie – a very abstract, artsy biopic about the famed Chilean musician and visual artist Violeta Parra.  Spoiler alert – she commits suicide at the end.  But now I kinda want to check out her work…

On my second day, I headed to Viña del Mar.  Despite being a separate city, it was only a 15 minute ride on the bus.  Valpo itself already has its own contrasts, but the contrast between it and Viña was also quite obvious – Viña is a lot more affluent.  It’s like a mix of the Hollywood Hills and Miami Beach, I suppose.  All the rich people from Valpo and celebrities from Latin America have homes there, placing themselves square in front of a very nice beach and some palm-lined streets.

The beaches there had giant waves and cold water – it was quite funny to see people standing in a line right where the waves end, squealing as the occasional wave hit their feet.  Very few people were in the water compared to all the people covering the beach! 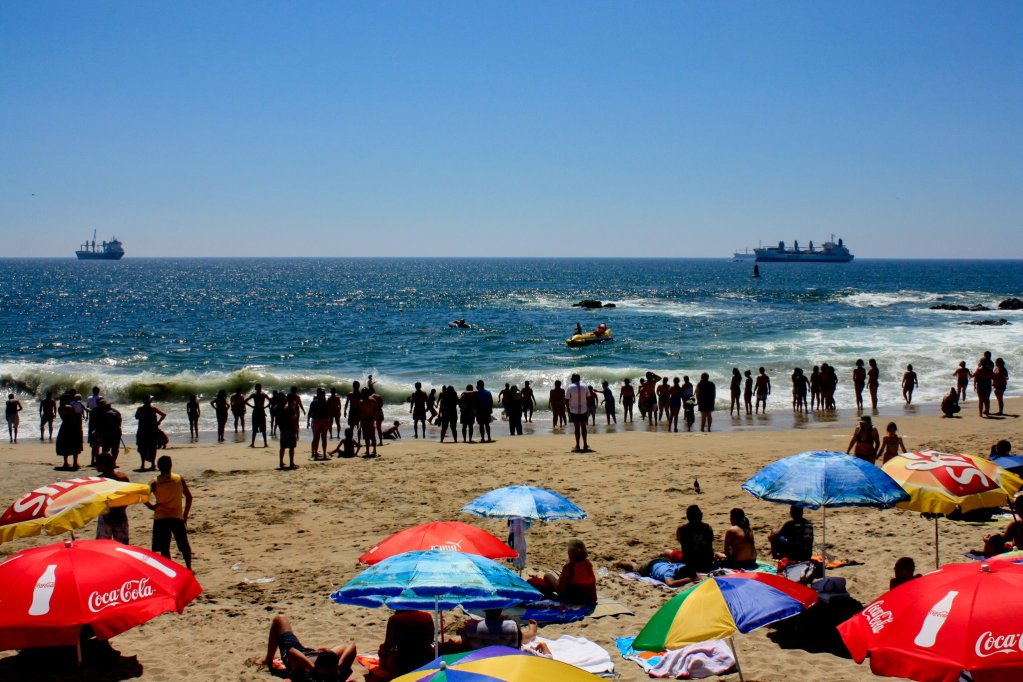 After a couple hours there and checking out the famed Reloj de Flores (Flower Clock), I returned to Valpo and walked the same neighbourhoods as before, just because I liked them so much – I don’t think I’ve ever done that so far on this trip!  But there, I ran into Gesine (Germany), who was the one who convinced me to go to Antarctica back in Ushuaia!  That was a pleasant surprise.  I was too tired to join her and her friend Shannon (Australia) though, and opted to just chill out at a public exhibition on tango nearby.  Nice to hear that music again.

When I finally returned to the hostel that night, I met my three roommates – Lihuén from Argentina, and Óscar and Silvia from Spain.  (It’s at this time where I realise that I’ve now been introducing myself more as “Iván” than “Ivan”, just so people understand me.  It’s almost getting to the point where when someone actually calls me by Ivan, I don’t respond right away!)  We got along great and had fun chatting, but talking was hilariously awkward, as my Spanish still sucks.  We heavily relied on Google Translate and three minds to come up with the English translations of what they were saying.  I can finally tell the difference between Spanish accents now though – I had a laugh at “Iguazu Falls” being pronounced as “Igua-thu” – the Spain way with the lisp. Silvia and Óscar are heading north the same way I am though, and we have a feeling we’ll all run into each other very soon.

Li and I decided to walk Avenida Alemania (yes, Germany) the next morning, a route that twisted and turned up and down Cerros Concepción, Alegre, and Bellavista.  (En route, a game for practice: she spoke English to me, I spoke Spanish to her.  Of course, she was way better communicating than I was, and I even cheated a bit.)  After taking in the nice views and having lunch, we walked nearly to Viña, but ended up at a beach on the outskirts of Valpo.

Just when I thought my Spanish had improved a little while practicing with Li, I headed back to the hostel on my own, stopping at a supermarket.  I tried to buy an AAA battery locked behind a display case.  When I got to the cashier though, to ask for it… Oy vey.  Well, I’ve learned that I can ask for things, but I certainly can’t understand what the heck people are trying to tell me in response.  I gave up and went home. 🙁  Seriously though, the way Chilenos talk – imagine if someone were to speak with you but swallowed all the “s” sounds, and spoke super fast.  Even in English, I don’t think I’d understand! 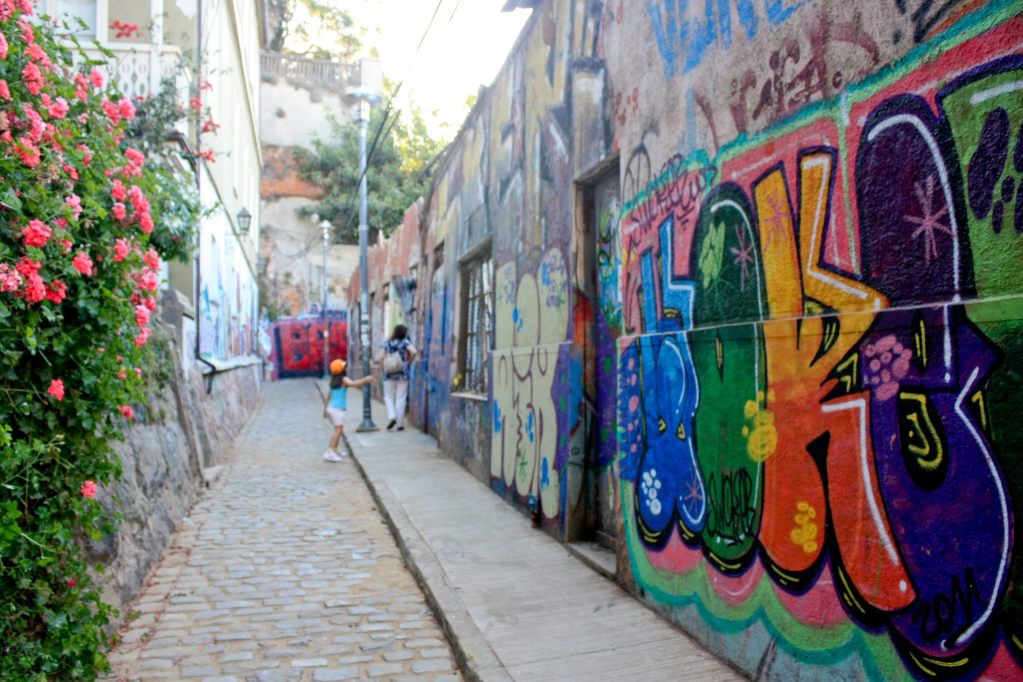 After a rest at the hostel (where I ended up helping Silvia and Óscar with their blog – I’ll be sure to follow their progress), I went for another evening walk…and ran into Gesine and Shannon again.  And then one more time!  We opted to grab some dinner together, and something fancy too.  Following the advice of Gesine’s ripped-out guidebook page, we chose a nearby restaurant and watched the sunset as we waited for it to open.  Over stories of our trips to Antarctica and a catchup on the last month, we tried some quintessentially Valpo/Chilean dishes: chorrillana, which is like Chilean poutine (fries with egg, steak, and onions on top, soaked in the steak juices), pescado frito (we had reinata, a fish common in the area, deep-fried and with a tomato salad), and clams baked with parmesan cheese.  A tad pricey, but absolutely delicious and worth it.  We said our goodbyes…but maybe we’ll run into each other yet again!

Valpo…I’ll have to return someday!

One thought on “Colour, contrast, clines”