Immediately upon arriving in Santiago, I booked my passage out again.  Second time in a row (Valparaíso was the first) – bad, I know, for a city I haven’t even seen yet, but necessary during peak season!  My next destination is San Pedro de Atacama, a 23 hour bus ride away.  Unfortunately, all direct buses were booked until Tuesday, and same for buses connecting in Calama.  Fortunately, my Amazing Race fandom came in handy, as I knew I could connect in Antofagasta.  Unfortunately again, my extremely lacking Spanish made this a very large ordeal to book.  Fortunately again, the guy at the bus company was super nice, made sure everything was clear (despite the speedy Chilean Spanish), and even walked me to the other terminal where my bus is to depart.  The whole peak season thing factors in again though – I had to settle for a higher class seating than I intended, which means paying a lot more, but hey, for a full day on a bus, it’ll be nice.

I arrived at the hostel Lihuén recommended, and then managed to meet up with Amanda (Sweden), whom I met waaaay back on my very first day in Buenos Aires!  Santiago is her home base, so she became my guide for the day.

But first – lunch.  Hadn’t eaten anything since the giant dinner in Valpo the night before at 8:30pm, and it was now 2:30pm.  Oops.  Amanda and I wandered in to Barrio Bellavista and quickly found a restaurant.  Upon her suggestion (and the kitchen running out of my first choice), I ended up with pastel de choclo, which is mashed corn, chicken, ground beef, onions, and a couple olives and raisins, all baked in a clay pot.  Delicious beyond imagination, but extremely filling – I couldn’t finish more than three quarters!

While catching up on our travels over the past month, we did a little tour of Amanda’s favourite places in the city.  First – a funicular (of the touristy kind, not of the public transit kind) up Cerro San Cristobál.  Beautiful panorama of the city, which sprawls for miles.  Amanda pointed out all the districts and the social stratification among them.  (The richer you are, the closer to the Andes?)  Santiago is enormous, but it doesn’t have much for the tourist – I think it’s a great city to live in though.  Large, accommodating boulevards, pretty clean, easy subway system, organised and buttoned-up, and you can find pretty much everything.  Amanda’s right though, the city could take better care of itself a bit, as some of the prettier buildings of old aren’t very clean and have some ugly graffiti on it.  For the most part though, it’s nice! 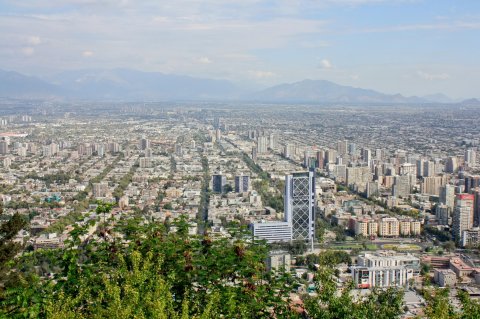 But oh yeah, the Andes.  They’re so large I almost didn’t even see them right in front of me.

After another helado (hehehe) we went up Cerro Santa Lucía, which also provides a nice view and a cooling breeze that’s rare at this time of year.  Very necessary.  In our other meanderings, we passed by Parque Forestal (where people sunbathe conservatively, in this conservative country), the presidential palace La Moneda (I misheard it as “lemonade”), the Plaza de Armas, and Museo de las Bellas Artes.  A very long day of walking, especially in the heat – and yet at 29°, it was considered a “cool” day! 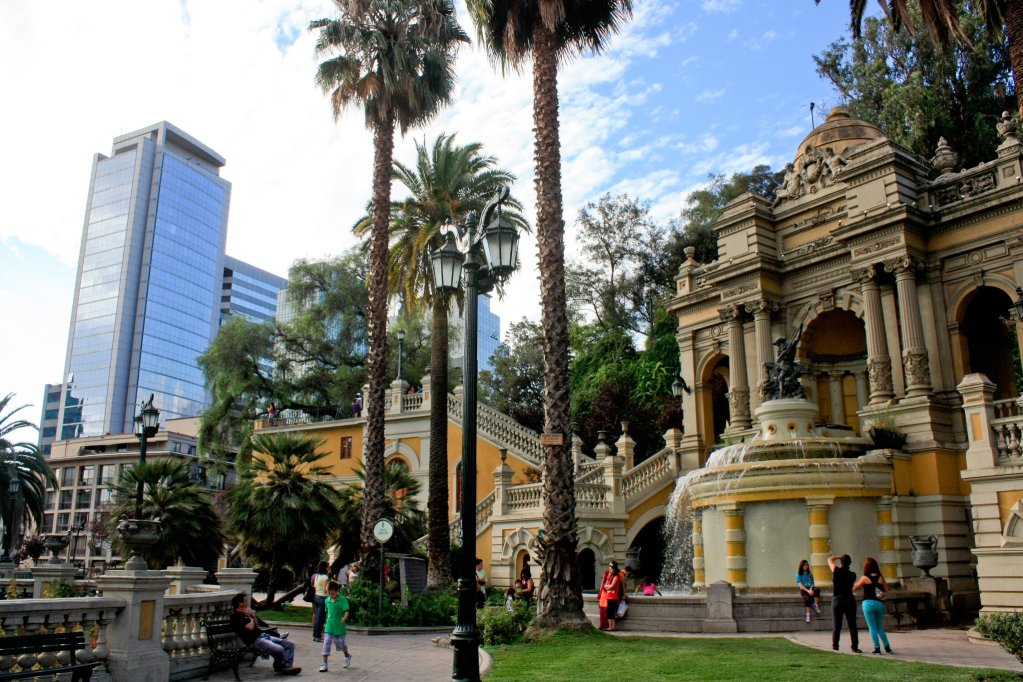 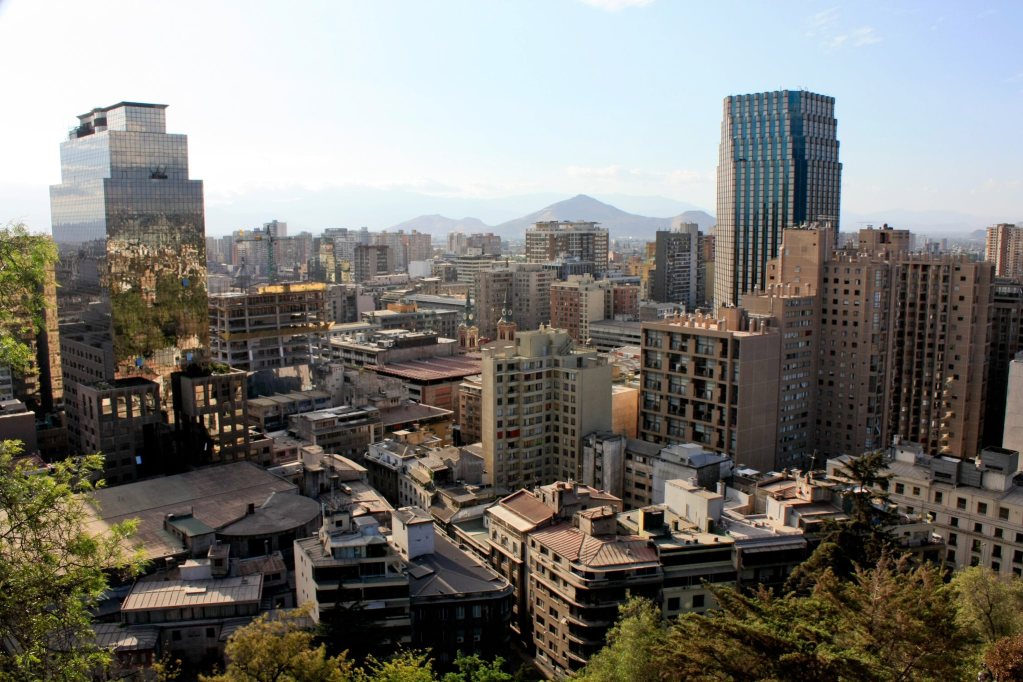 On our way back to my hostel, we passed by a hairdresser…and then I decided to go for it.  I’d been dying for a haircut for a couple of weeks already.  Having a haircut in a foreign language wasn’t really something that I thought about before this trip, but now, the thought of it felt quite daunting.  Thankfully, Amanda accompanied me and translated everything I said!  I nearly ended up looking like a rectangle.  Hahaha…I have to do this at least one more time during my travels, and I don’t know if I’ll be so lucky to have a Spanish-speaking friend with me.  But anyway, this turned out great, even better than what I normally get in North America. 🙂

After saying goodbye to Amanda (maybe we’ll meet again in Sweden this summer!), I met up with Lihuén at the hostel as she just arrived, and I was treated to a slice and half of pizza.  Good enough for dinner, after that pastel de choclo… We also said goodbye, as she was heading back to Argentina. 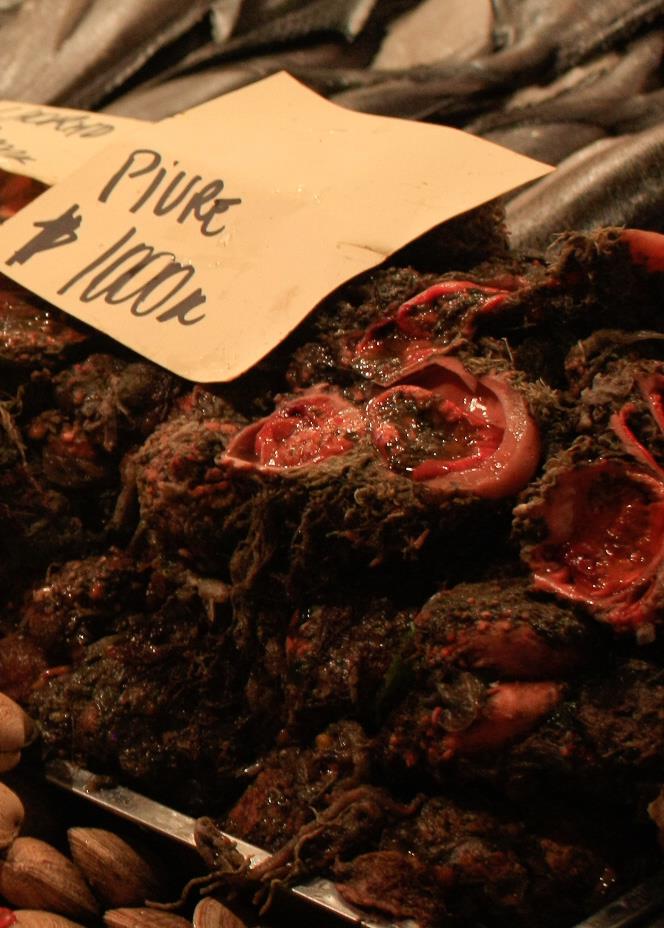 It’s another easy day today though, as the heat is cloying.  I’ve just returned from a mere four hours of walking and I’m exhausted, even after stopping a billion times, entering malls for air conditioning, and hopping into two museums (National History, Bellas Artes).  I also checked out Mercado Central, a famous seafood market.  Andrew Zimmern featured this thing he tried called piuré on his show Bizarre Foods… It certainly looks bizarre.  And gross.  I chickened out, but had a lovely if slightly suspect seafood stew for lunch (paila marina, fish and shellfish).  Now it’s time to sit and wait for that bus, where I’ll be sitting some more!  Oy.