We left Salta at midnight to catch the bus to La Quiaca, the border city to Bolivia.  Arriving at 7 am (meaning 6 am Bolivia time), we still had to cross the border on foot.  Wowwwww inefficient – at least we crossed in 2 hours.  Going the other way, the line looked at least 5 hours long!  The customs agent would stamp a few people through, disappear for maybe half an hour, then come back and do that all over again…

Bolivia feels different.  It’s more…Asia-like in some ways.  A few more stray dogs on the street, a bit more chaos, less developed, and everything is cheap.  Our two hour bus ride from Villazón (just across La Quiaca) to Tupiza cost only $2.

Now that bus ride was strange.  First off, we were walking toward the terminal, when the bus – already running – approached us, and some guy leaning out the door was yelling “Tupiza, Tupiza!” at us.  If you’re carrying backpacks and in Villazón, where else do you go?  We hopped in.

The scenery is gorgeous, and a bit of a continuation of the Quebrada de Humahuaca stuff – I’m especially enamoured by the almost purple coloured hills.  We passed by many villages of just mud houses.

Around an hour into the ride, I was awoken by…marketing.  I don’t know whether this guy was on the bus in an arrangement with the bus company, or whether he just hopped on, but a Bolivian guy with a strange face tattoo of a person and dressed up in formal clothes stood up and started trying to sell us some ointment.  He went on and on and on (in Spanish, but far slower than Chile or Argentina – I’m stoked that I can understand a lot more) about arthritis and aches and headaches…and his solution?  What else from Bolivia – an ointment primarily made of coca.

He handed a packet to everyone on the bus, then dabbed a bit of ointment on each person’s hand – I complied, despite being a bit reluctant.  Rubbing it on my skin only made it feel numb.  After his long schpiel, he added – 12 bolivianos ($1.75) per packet, but a special discount meaning it was only 10…and if you buy two, you get one free!  All that talking for half an hour just to sell things worth a dollar!

THEN just when I thought he was done, he started talking about digestion problems, constipation, toxins, muscular whatever, blah blah blah… And then he pulls out this flat-shaped nut or seed thing.  Turns out it’s a natural laxative.  Take it and you’ll feel your stomach rumbling in five minutes; you’ll run to the washroom in 15.  Only 7 bolivianos ($1)!

Ehhh…no.  Well, plenty of locals bought into both.

I followed Tess and Matt to a hotel they researched – same price as Argentina, around $14…but I get a single room with two twin beds, my own washroom, and my own TV!  The hotel even has a pool (which I decided not to use)!  Bolivia is cheaaaaap…but this is a splurge.  Just this once. 😉

With my shortened timeline, I went off to research tours, and found a horseback riding tour for the afternoon, and a 4 day salt flats tour for the next day.  I was a bit hesitant to take the salt flats tour so soon, since I went this far to get to Tupiza, but this tour was looking for a single person to fill up the truck, and I’m running behind anyway.  Besides, the only thing to do in Tupiza really is to check out the surroundings by horseback, and by doing this on the day I get here, I can leave anytime.  (I just hope I don’t come down with altitude sickness, having not acclimatized much – but just in case, I went to a pharmacy and bought some pills.  All in Spanish, yay!)  For both of these tours, I found three people whom I had seen around but not met at my last hostel in Salta – Shasha (NZ), Jessica (Australia), and Sam (England).

But first, lunch – and Tupiza really seems like Asia in this regard.  Everything around seems to be backpacker food.  Homemade pizzas and pasta, shakshuka for the Israelis, banana pancakes for breakfast, and cheap cheap cheap fresh squeezed juice… As inauthentic as it is, I’m happy!  Also, English TV and 90s music/one hit wonders playing in restaurants.

After lunch – horseback riding.  Provided with cowboy hats and leather chaps, it certainly made the wild west feel even more wild.  This area is known for being where Butch Cassidy and the Sundance Kid met their demise over 100 years ago.  Riding among multicolour cliff formations (Cañon del Inca, Puerte del Diablo) and canyons with impossible shapes, funky cacti, and the heat – felt like a movie, and it made the big detour to Tupiza worth it.  Only a little more painful when the horses (all obedient, including my horse, Chepeto) started trotting! 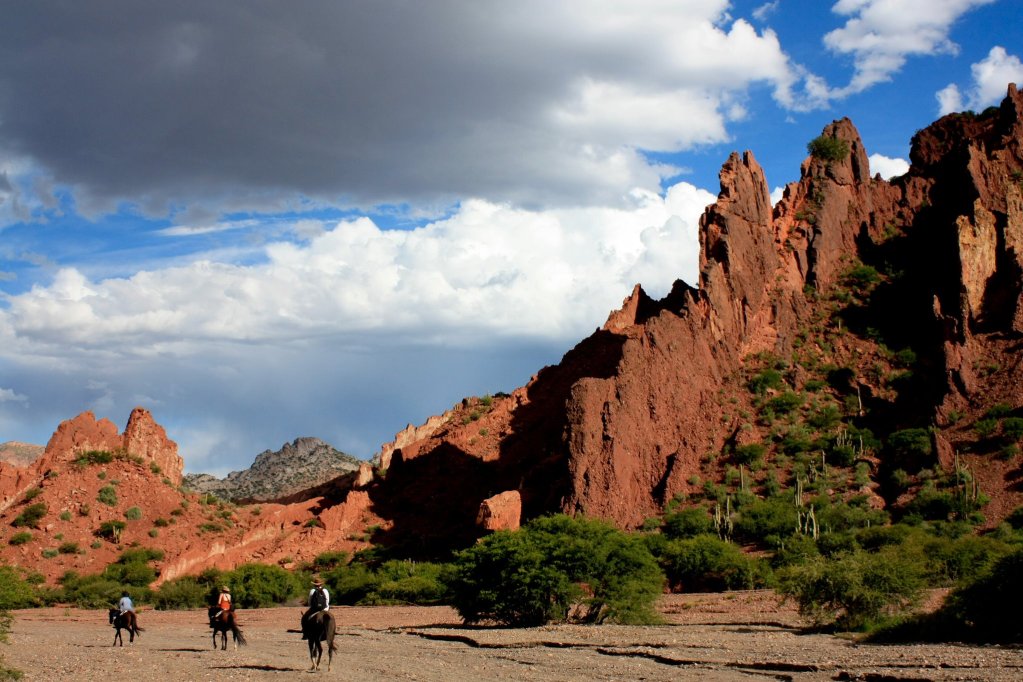 We had a thunderstorm just after heading back.  Hopefully the weather will clear up soon – I’m heading on the tour to Uyuni tomorrow, and that’s the centerpiece of my South American trip!