This is one of those things best left to pictures than to descriptions…so I’ll keep it short.

Jess, Sam, Shasha, and I departed Tupiza (altitude 2950 m) at 8 am, for the far southwest circuit to Uyuni.  We had a lovely driver/guide, Carmelo – the most enthusiastic person ever, though he only spoke Spanish.  (Every so often: “YAAAAY!” or “Llamaaaa!” whenever we saw a flock.)  As is required, we traveled in a convoy – two other trucks (four Americans, four Australians), as well as a few trucks (mainly rowdy Israelis) from other tour groups.

Our first day, we visited Quebrada de Palala, an area full of red pointy, needly geological formations; El Sillar, another valley of the moon; Valle del Diablo, an area impassible in winter due to heavy winds and blowing sand (of which we still got plenty, in summer); and the village of San Pablo de Lípez, a village of 150…except we maybe saw three people and a bunch of abandoned-looking houses with broken windows.  Turns out they’re tending to their llama flocks.  Oh yeah, llamas – we saw pleeeeeenty of them.  And ate some llama tamales for lunch too. 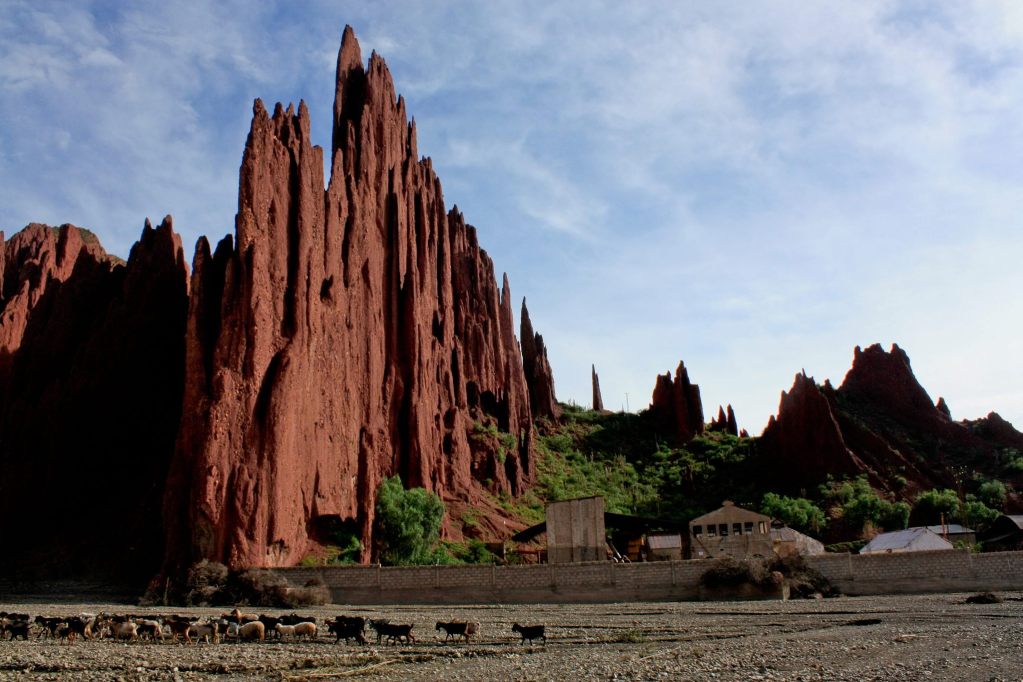 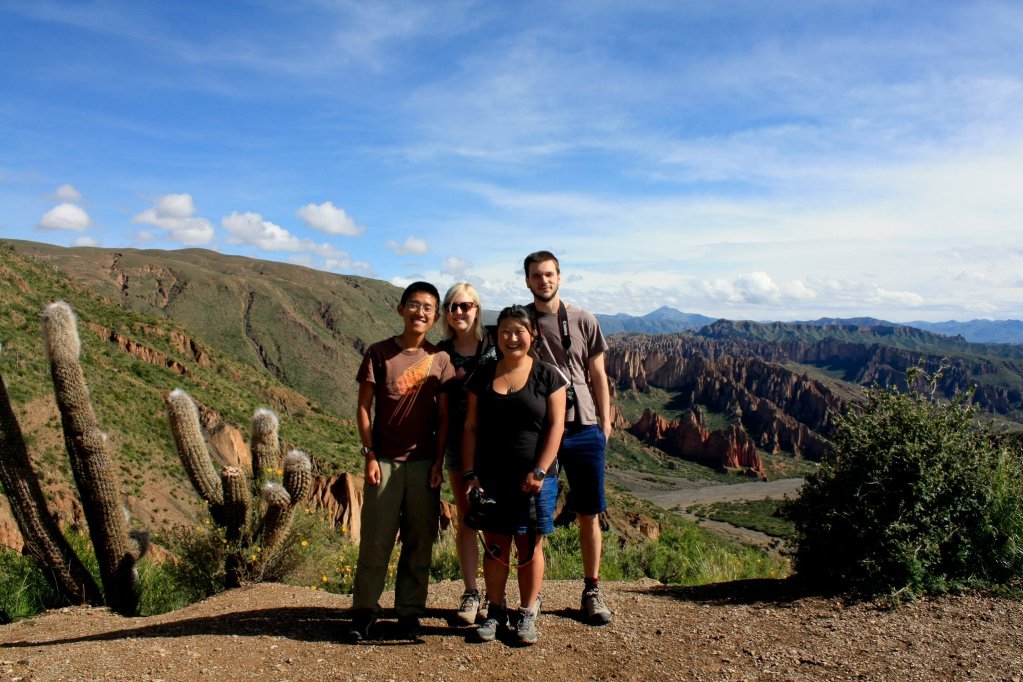 Carmelo is awesome.  He keeps pumping Peruvian and Bolivian music – it sounds like it’s stuck in the 80s, even though it’s modern.  Also, he always tries to keep us awake to see the scenery – which he’s seen a million times, given that he does 5 tours a month, and for the past 5 years.  He’s even more enthusiastic than us.  And he loves all the animals – llamas, donkeys, vicuñas, flamingos, emus, you name it. 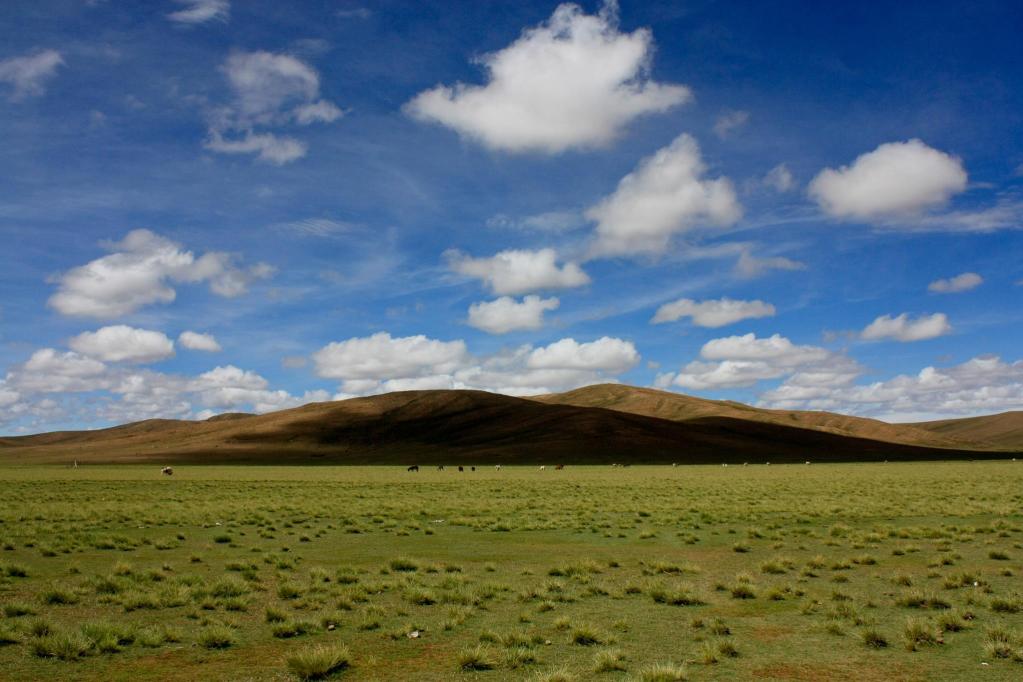 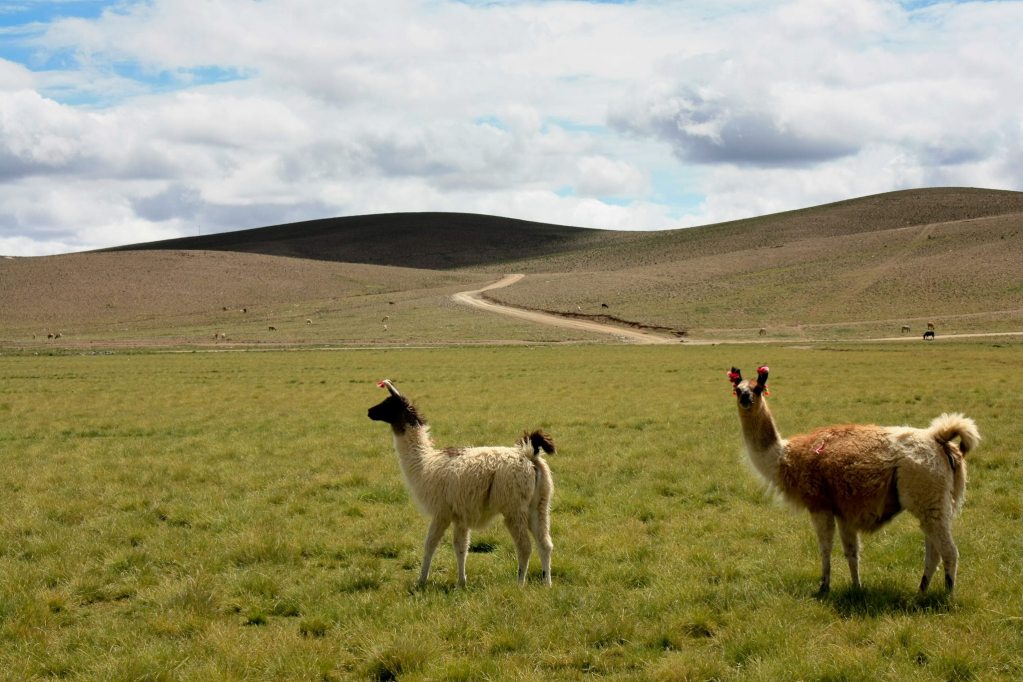 On our way to our night stopover, over some gorgeous scenery, one truck ahead of us got stuck in a river.  Then we wondered why we were travelling in a convoy if no one had a tow rope.  An hour later, they were unstuck, and we all proceeded.

We arrived at the village of San Antonio de Lípez (4260 m) just before sunset, and we watched as the kids played…and worked with wheelbarrows.  Hmm!  The setting was lovely though, just beneath the mountain Lípez, and in a nice cosy village.  However, it was pretty freezing that night, and the heavy rain certainly didn’t help…

…Especially for the next day.  All four of us (and some in the other groups) woke up sick – various symptoms of flu and altitude sickness.  I just had the latter, with a major stomach cramp and an inability to digest much.  I think the altitude pills I took might’ve contributed to the indigestion, although at least I had no migraine.  But this was our longest day (13 hours), and we had to start at 5 am (4 am wakeup call).

We first visited the old abandoned village of San Antonio, where apparently (if I understood Carmelo correctly…or I might just be completely extrapolating here and wrong) people heard devilish voices and abandoned the place, to where we stayed the night before.  The setting was beautiful – sunrise, stone houses with missing roofs, and a dusting of snow – some people had an impromptu snowball fight?  Us?  Freezing and crampy, but still happy. 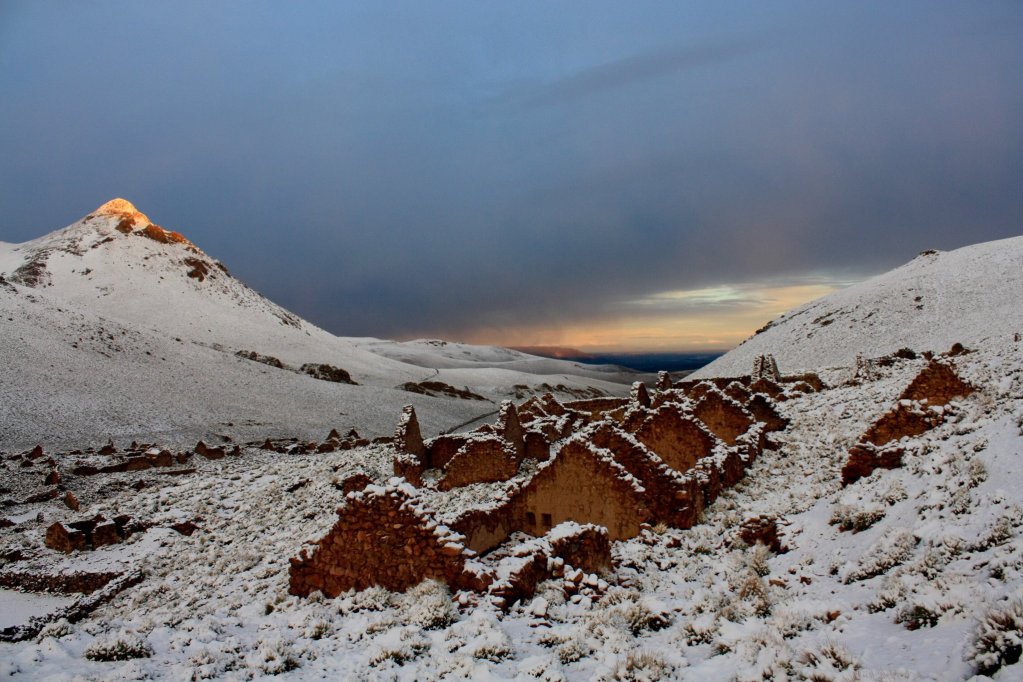 Due to the rains, the roads were very very muddy…and going uphill didn’t help.  Our truck got stuck twice, and the first time necessitated a ton of help from others, plus an hour of time.  The rowdy Israeli groups did help though – although we saw them feeding their driver and themselves whisky, they certainly can bounce a car out of being stuck.  However, we were all left completely covered in thick mud – some of which is still on my shoes four days after.

After a beautiful lookout point over Laguna Morejon and the Uturuncu volcano (6008 m)…I fell asleep.  Oops.  And sitting in the passenger seat isn’t a great place for that, with the bumpy roads and my head rolling everywhere.  (Probably should’ve done what I did the day before – chew coca leaves.  They numb your cheek and tongue, but they keep you alert and help you feel better.)  I got kicked to the back in the afternoon…and somehow managed to stay awake the whole time back there.

The afternoon was a rush of stops – Laguna Kollpa, with flamingoes; Desierto de Dali, an absolutely barren area of sand dunes and a rock formation here and there; some desert covered in snow; Lagunas Blanca (white) and Verde (green), which are their respective colours due to sulphur (white), and cobalt and arsenic (green); some hot springs which we took a dip in (great after not showering for two days…but neither has anyone else); and the Geysers Sol de Mañana (morning sun; 4950 m).  Having reached 5000 m, we were all dying…but the scenery was unreal.  Some of the geysers’ energy are also harvested for electricity.

Our first stop the next morning was just across where we slept the night before – Laguna Colorada (4278 m), the red lagoon.  Some people were still suffering from the altitude – I was just out of breath all the time, but generally okay.  This was by far the most gorgeous thing we had seen – a seriously red body of water, to the point that even the clouds above it are red due to reflection.  And thousands of flamingoes, not very afraid of people!  The redness is from algae, which surfaces in sunlight. 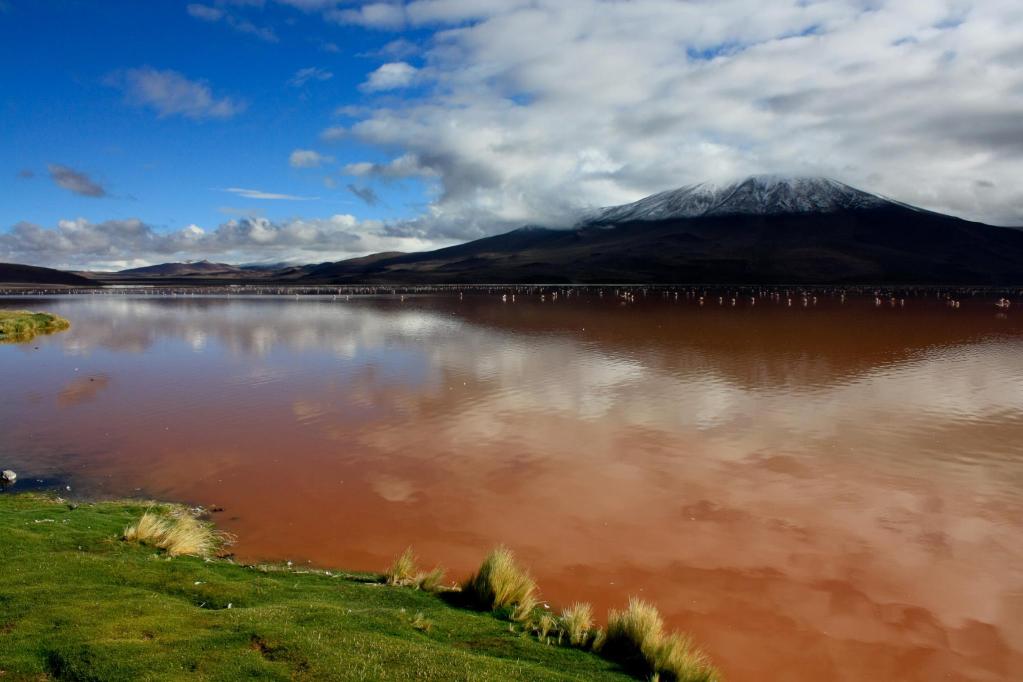 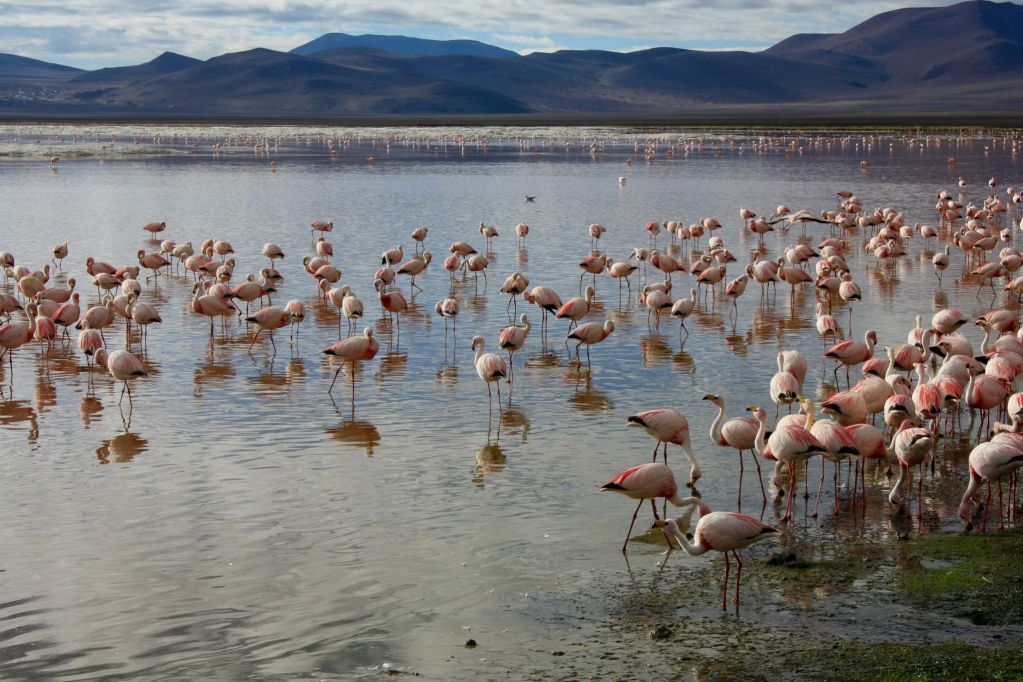 We then headed to the Desierto de Siloli, which was odd – after barren desert, suddenly, a bunch of giant rock formations in twisty shapes, including the Arbol de Piedra (stone tree).  I tried climbing up one of the formations…but was very very out of breath by the end!  We also passed through the Valle de Rocas (another mini moon valley), equally out of place in the barrenness. 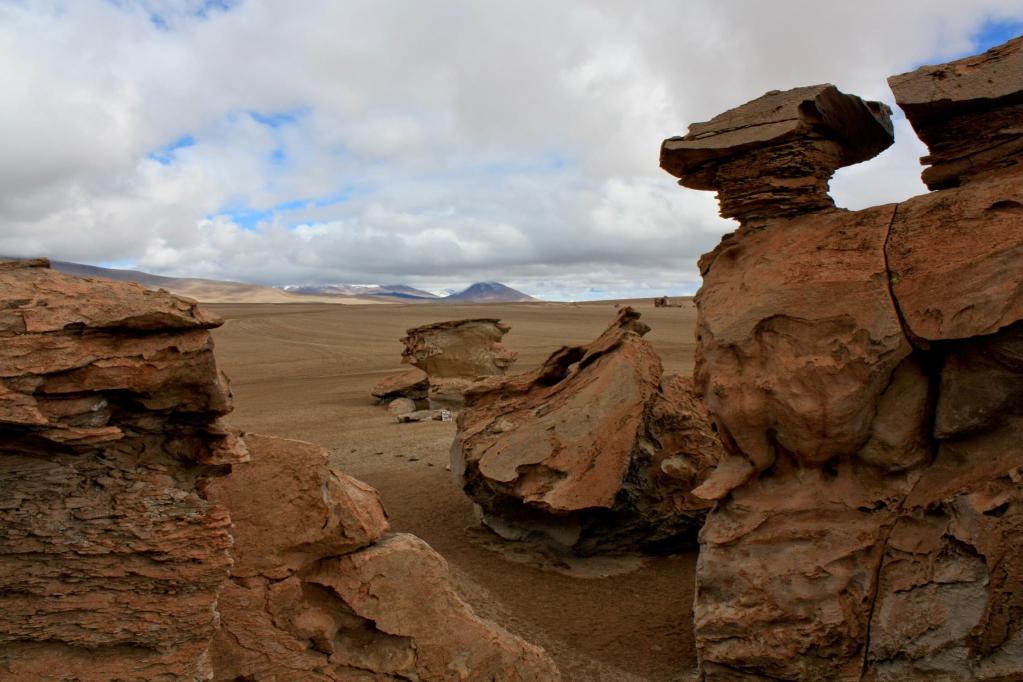 Our next stop was some giant laguna that I can’t remember the name of.  There, we saw…skinny dipping Israelis.  Ewww.  Carmelo made sure to note to us that that was a sulphur lake.  Heh.

We learned a bit more about Carmelo on the third day – he’s from a small town in Bolivia, and moved alone to Tupiza when he was 14, for school.  After relocating a few times to Tarija, Buenos Aires, Calama, and Iquique (Chile), he moved back to Tupiza, where he has a wife and four year old son.  He never really liked the travelling – sad thing is that Bolivians in Chile and Argentina constantly get asked for their documents.  Kinda like Mexicans in the US.  He’s such a happy guy though, and he does so much – he plays football, used to sing in a band (he sang constantly in our truck), knows Spanish and Quechua and bits of English, French and Italian, cooks, drives giant trucks…  He enjoys giving tours, despite the very long drives, since he loves the Bolivian scenery.

After a short stopover in the town of San Cristobál (with its flooded streets, flooded school…), we were on our way to the city of Uyuni.  About 20 km outside of town though, the car ahead of us containing the Americans LOST their tire.  By lost, I mean it flew off.  That’s the wear and tear of those roads for you…  We never felt unsafe, as our drivers were extremely competent, but sometimes these things just happen.

To make matters more frustrating for our guides, the hostel they booked for us was overbooked.  After much chaos, and much worrying on Carmelo’s part (after all, his friend was still fixing the truck), everything turned out alright…and we all had hot showers.  Finally!

Uyuni (3650 m – all feeling much better), the town, is ugly.  Carmelo can’t hide his disdain for it.  Despite all the tourist dollars, it’s littered in garbage, flooded all the time, and just ick.  I spent the evening running around town trying to book passage to Potosí…and ran into Chris (Swiss guy I met in Buenos Aires, then Salta) yet again.  Hah!

On our very last day, we had a 5:30 departure to see the sunrise over Salar de Uyuni.  And…wow.

Salar de Uyuni is the largest salt flat in the world.  There’s really nothing like it.  When flooded, it becomes the world’s largest mirror.  When not, it’s stark white for miles.  We saw the sunrise reflected over the flooding.  (Due to the wet season, only small regions of the salar were accessible.)  Carmelo was more enthusiastic than me, even, and this was my dream destination that I planned my whole South America trip around!  He kept taking the camera from me, forcing me to steer the truck!

We had breakfast in the salt hotel (about that – not good for the environment at all, but Japanese tourists keep the place alive.  We just used the tables.) and then we had a field day taking crazy pictures.  As soon as the sun started shining bright, a lot of the water evaporated, and we had our (well, sort of) dry ground. 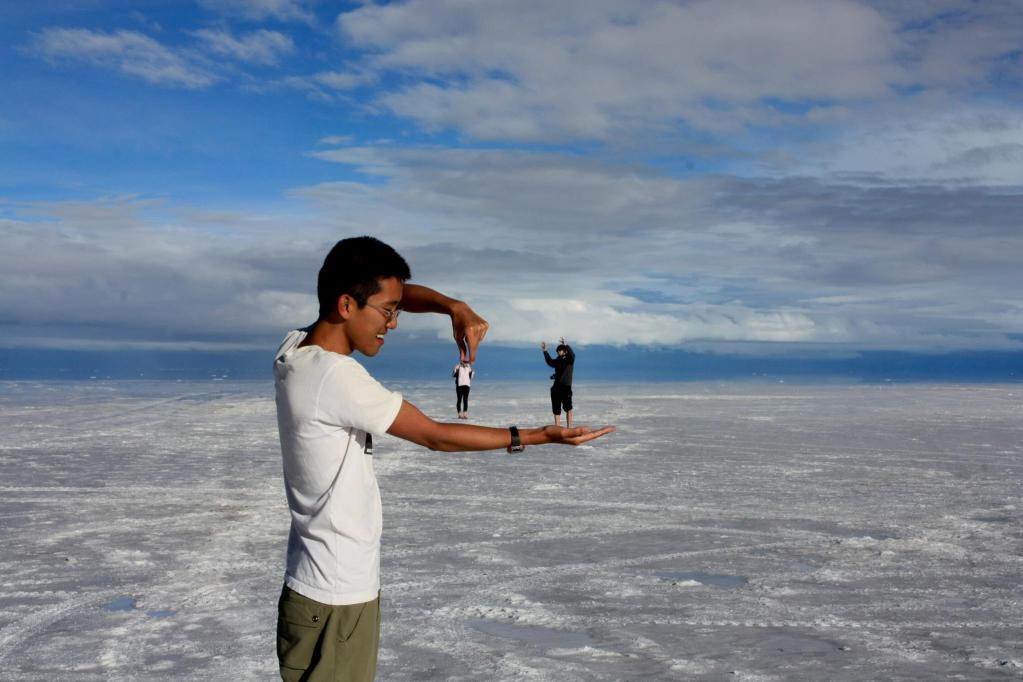 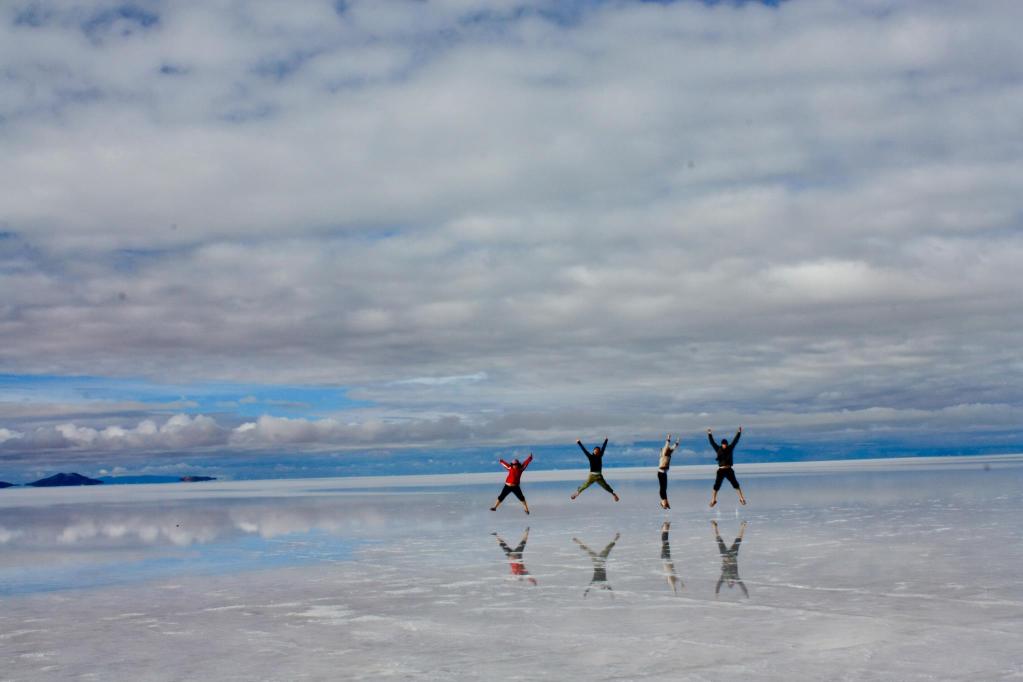 After three whole hours on the salt flats, we made quick stops in Colchani for souvenirs (which I never buy anyway), and the train cemetery… then it was all over!  Awww.  After saying some heartfelt goodbyes to both Carmelo, Sam, Jess, Shasha, and the other people in our convoy, off to Potosí…

2 thoughts on “Beyond nature”