Due to lack of time, I did something I normally wouldn’t do – take a night bus arriving in the middle of the night. I bought a bus ticket from Uyuni to Potosí, leaving 7:30 and arriving past 1 am for 35 bolivanos ($5, 3 hours)…but was jittery enough that I bought another one for 6 pm, arriving at midnight, for another 30 Bs. Tried to get a refund on that 35, but was unsuccessful. Was told to go sell my ticket on the street…I just gave my ticket back to the woman and told her (in bad Spanish) to sell it again without paying me. She was confused, but after much hemming and hawing, accepted. Seriously though, hesitating over free money?

The bus was an experience. Bumpy bumpy bumpy. Also, despite being seated, there were plenty of people standing in the aisles for at least an hour – turns out we were making local stops. After arriving in Potosí at midnight, I caught a taxi for my hostel. I was really quite paranoid at this point – I’ve heard too many stories about people getting taken to random places and having money stolen. But that taxi had a radio, and the lighty thing on top – I was alright. We randomly picked up another woman though.

I took a taxi, my first since Buenos Aires almost 7 weeks ago, since I didn’t want to walk 20 minutes to my hostel late at night. But that ride took over 30 minutes…since the driver and the woman weren’t able to find my hostel! That was a bit of a headache… I’m glad I can communicate relatively okay now in Spanish though, or I would have been freaking out. After many circles, we found my hostel… a block away. Oops.

I had an empty 8 bedroom dorm (after Antonio, the hostel owner had to use a card to jam the lock, since the key was lost…) all to myself, a nice giant bed, and a very hot shower all waiting for me. Awesome.

This morning, I opted to take a tour to the infamous Potosí mines. Potosí (4090 m, one of the highest cities in the world) really lives on its mines – once famed for silver, that supply is now dwindling, as is the economy here. Antonio was our (group of 14) guide, as he used to work in a cooperative for five years.

Our first stop was the miners’ market, where you buy gifts for the miners. As they’re stuck in there all day every day for 6 to 8 hours, they like coca leaves to suppress their appetite. Also, “Bolivian whisky” – 96% proof alcohol. I had a lick – uurrrrrgh. Also, cigarettes – special ones…and lastly, dynamite. Potosí is probably the only place in the world where you can openly buy sticks of dynamite on the street. We had a field day taking photos – especially Antonio… 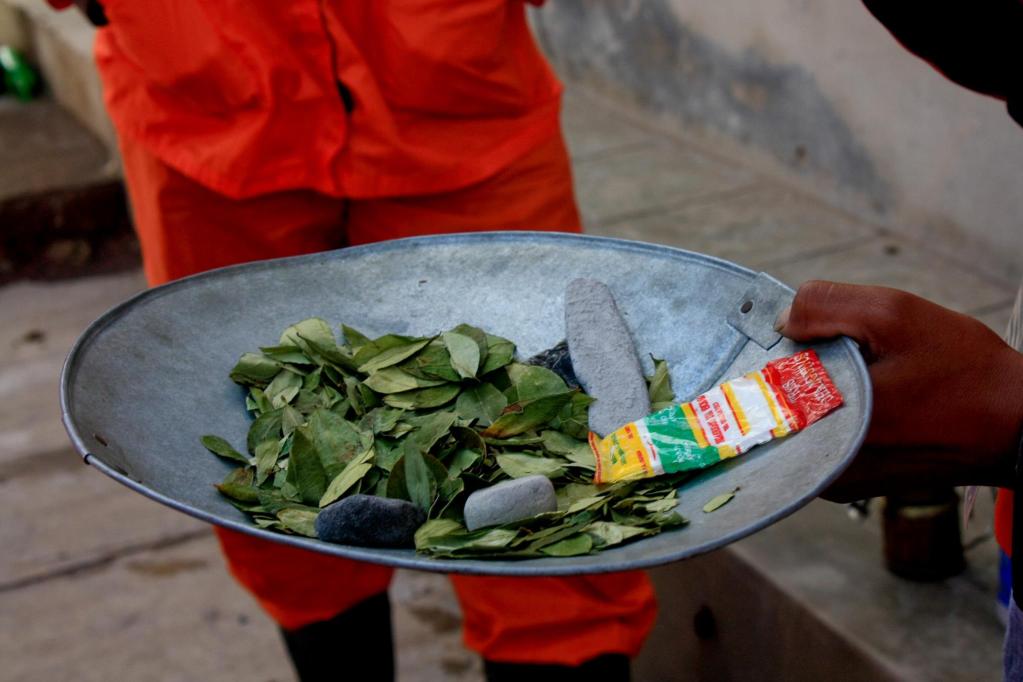 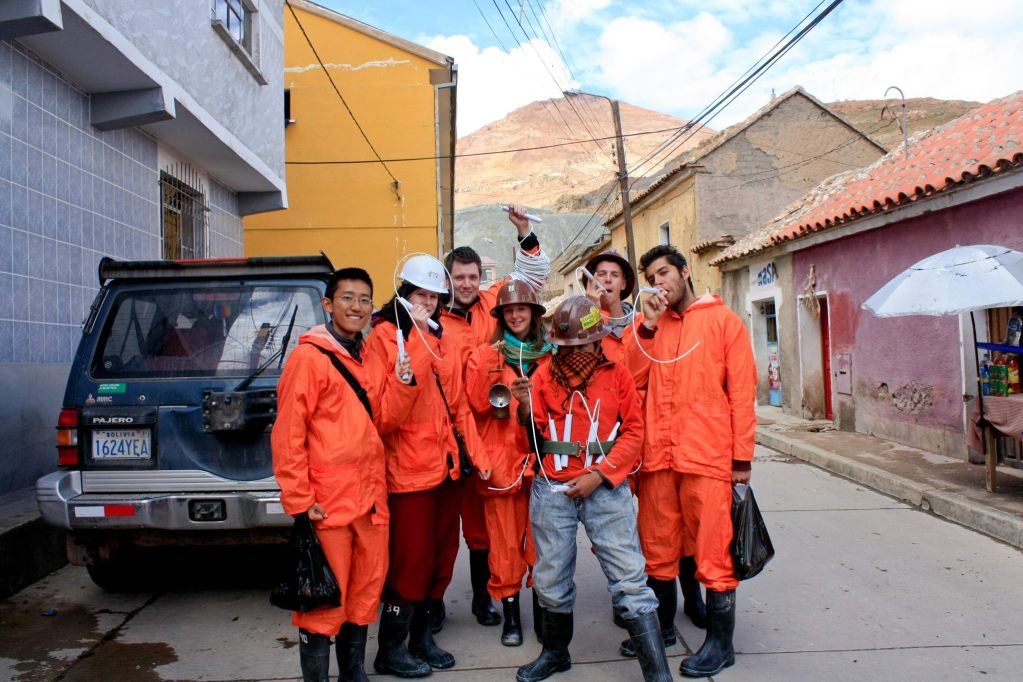 We took our private bus to Cerro Rico, then we were introduced to the San Miguel mine (seems to be very different from other tourist experiences I’ve read), where Antonio, his father (for 25 years), and his grandfather (for 30) all worked. The entrance has this little red dot painted on it – llama blood – and also, a llama skull. Quechuan practice upon opening a mine.

Then we climbed in. Ohhh boy. Muddy, tight, hard to breathe… The altitude is enough to make you winded, but the scrambling with even less oxygen inside a mine was probably the most strenuous thing I’ve done so far in South America. Some places were flooded, some places we slid on our butts, some places we crawled… We were (and my camera case too) absolutely filthy.

Two and a half hours in the mine. We went down “only” six levels, and there are 14 here. Two people in our group stopped and did not go further than level one. Definitely not for the claustrophobic. There’s barely anything holding it up, save for a few wood beams here and there, and a plastic tarp holding up some rocks, and it could really just collapse at any moment. All the time, we were told not to touch the walls here or there, because of toxic chemicals, silicon, or asbestos. The average lifespan of a miner is under 40 years old! Most (like Antonio’s father and grandfather) die of silicosis, or asbestosis, or maybe both. It’s tradition that after one dies, the son takes over in the cooperative… but after Antonio saw the young death of his father, his family vowed to stop that tradition. It ends with him, and he no longer works in the mines.

When we finally reached level six, we could see the minerals they were looking for. A bit of silver…but only 20%, as the rest was mixed with zinc. A lot more zinc, tin, and some copper around too. 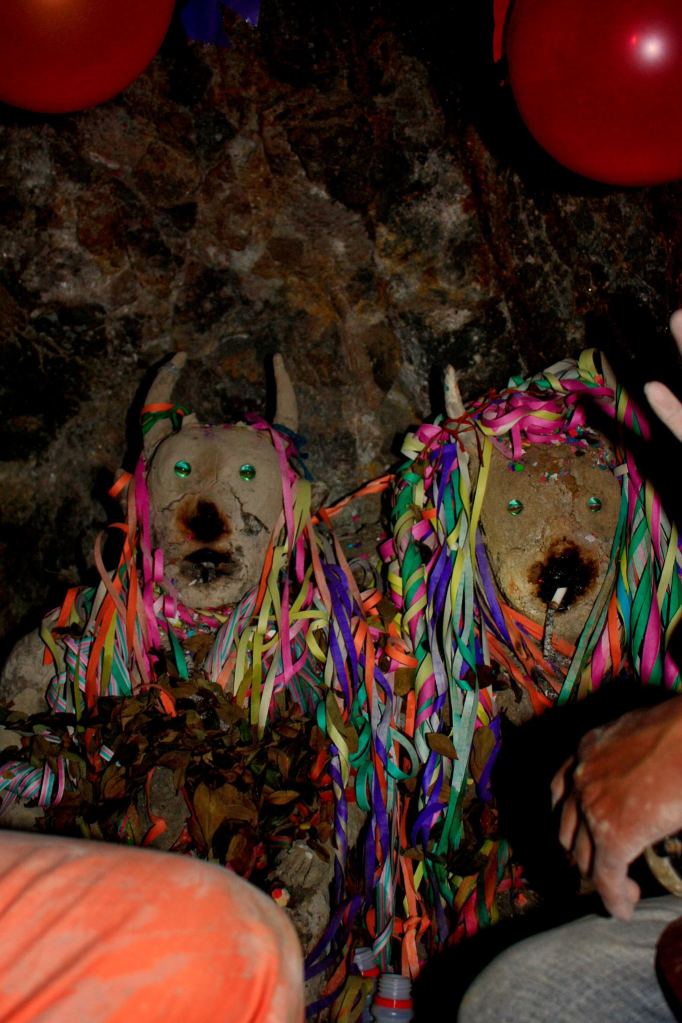 We stopped at a shrine for the two devils of the cooperative, around level two. Because everyone here is Quechuan (Incan descent), they differ a lot from the very-Catholic population in that they have many deities – Pachamama, the mother of Earth, for example. When the Spanish invaded, they threated the Quechuans to work and obtain silver in the mines, or the devil would get them. The Spanish word for God, Díos, got corrupted into the Quechuan word Tío, which is the name of their main devil of Cerro Rico.

These two devils were quite decorated, and Antonio prepared his offering for them, to gain safety for his friends in the mines. Coca leaves, alcohol (pure alcohol, so that the devils provide pure minerals), and lit cigarettes – well, that took up a bunch of our oxygen in the cave. On the devils’ hands, feet, and…genitals (they believe the devil and Pachamama get it on. When they do? Minerals, of course).

Another thing was to dip your finger in the bottle of alcohol, light it on fire, twirl it three times, then clench your fist to extinguish it. We all tried it (for me, sans the devil-worshipping phrase at the end) – not painful at all, but certainly weird to see your index finger glow blue-hot.

Lastly, dynamite. Antonio cut a third of a piece, and prepped it all, put it in a section of the cave maybe 25 metres from where we were, then BOOM. Earsplitting, with a blast of air. When we arrived at the scene of the crime, we really had to shield our noses and mouths – dust, probably harmful, everywhere.

We were very very glad to get out of the mine. Completely exhausted, filthy, winded. How do people do this every day, and to further depths than we saw? I wouldn’t wish this job on anyone.

Antonio explained to us the economics here – about 35% of the money stays in Bolivia, as the minerals are exported (to Peru, Chile, China, Malaysia, US, and even Canada) to be refined. President Evo Morales, quite popular with farmers but not so much with the miners, promised factories (to replace the mining operations when they eventually fail) and refineries years ago prior to his election, and hasn’t delivered. For now, Potosí declines, and so does Cerro Rico – one centimetre per day. So what next?

Very worthwhile visit. I’m glad I came and I never want to do it again, but 4500 miners have to, every day, for three times the time I just did today.