There was a strike in Potosí, preventing me from the normal option of leaving town by bus. Strikes of any sort are extremely common here, and bus routes to major cities are often blocked for hours or days. Antonio beckoned me into a taxi at 7 am, after I had woken up early (begrudgingly, as I was fighting a cold from walking around Potosí in the rain the previous day) due to his warning the previous night. “Maybe you can get around el bloqueado.”

I was lucky, and I did – after detouring around one protestor-made roadblock, immediately upon arriving BEHIND the bus station, the taxi driver pointed out to me a private car heading to Sucre. Unfortunately, it would cost me 6 times the normal cost – 60 Bs ($9) instead of 10. Ah well, worth the price of an extra day.

Also unfortunately…I was stuck in the middle, in the back of a small sedan, between two heavily-dressed old Bolivian men. At least I’m skinny. The guy on the left was nice enough. The guy on the right? First, he brusquely asked the guy in front, in the passenger seat, to give him some leg room by moving his chair up. Then he proceeded to stretch out and also take ALL of my leg room. Not wanting to cause a commotion during the three hour ride, I did not speak up. I did try passive-agressively to nudge his leg. No avail.

That was a pretty tense car ride. No talking at all for three hours.

Then when we got to Sucre, nice guy left (yay, I can take his seat and legroom), rude guy left, and then there was the guy in the passenger seat. He started arguing that it was supposed to cost 40 Bs. Nearly got pulled into that argument…thank goodness I wasn’t, since they were talking at Chilean speed. 😛

Dropped off at my hostel – or rather, house. A private room with a desk and a giant window and towels and even a bathrobe, right beside the third floor balcony! And the view? Spectacular. Instant love. The house is owned by a Bolivian-German couple, and their dog, Sica-Sica runs around and is super obedient and totally understands Spanish. (She even shook hands with me!) Awesome.

Did I mention Bolivia is cheap? I probably have, but not enough. That room, in the oldest neighbourhood of Sucre (Recoleta), perched on a hill overlooking the city? $12. A packet of 8 paracetamol pills? 2 Bs ($0.30). Big helping of pistachio ice cream? 4 Bs. Heading into town, grabbing a fresh-squeezed orange juice off the street that must’ve used up like 6 oranges? 3 Bs. A big sandwich and a giant glass of apple/pineapple/lemon juice, at a touristy but stunning mirador overlooking the whole city? 17 Bs. I’m spending around $2 a meal here, and I’m not even skimping. In fact, I almost feel guilty about “splurging” on everything.

Anyway, Sucre. After Valparaíso, this must be the second city I’ve wanted to live in – it’s gorgeous here! All the buildings are painted white, Spanish colonial architecture is everywhere, and nearly all the roofs are terracotta shingles – this makes for a dazzling effect, whether viewed from high above or walking among the buildings. All the photographic opportunities make me devolve into a bunch of squealing noises. The atmosphere is very relaxing, with Plaza 25 de Mayo having lots of open green space, cafes are everywhere, the people are a mix of the modern and the traditional, and everyday during siesta (12-2 pm) and after school (5 pm), the streets flood with students. It makes for great people-watching. 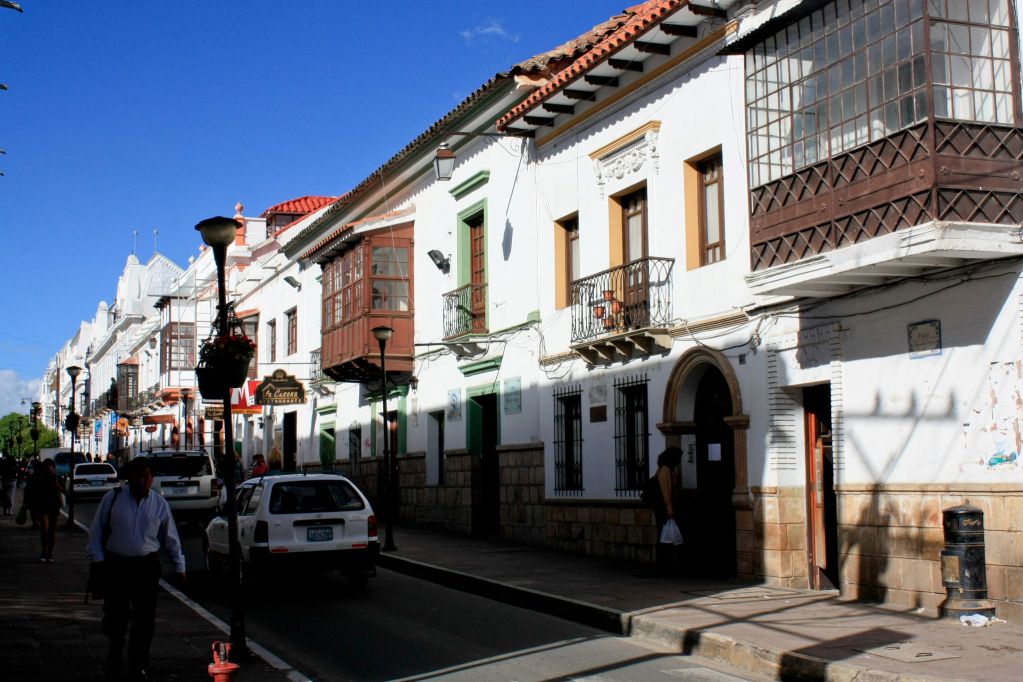 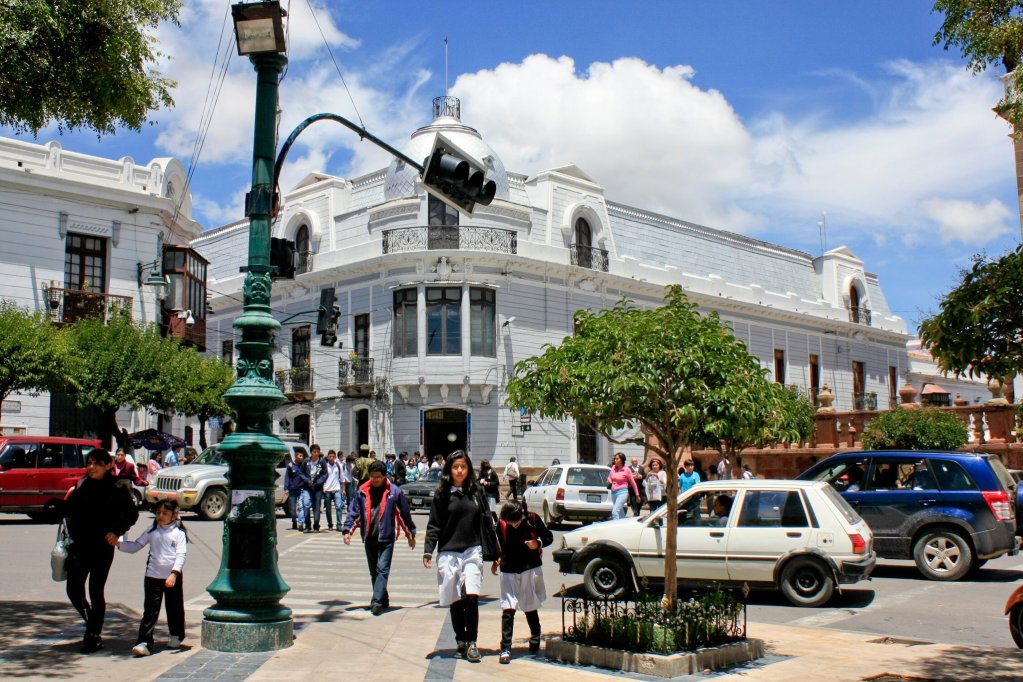 Aside from wandering around town in awe, I spent some time visiting museums as well. ASUR had many examples of the large variety of textiles made by indigenous peoples – when making patterned textiles, women use red and black, filling up the textiles with as many different patterns as they can, while men make more rudimentary figures but use far more colours. Even a simple symmetrical textile with stripes has deep meaning. The museum also featured music and dances of indigenous people…some of which were so cacophonous and puzzling I couldn’t quite suppress my laughter. There’s always some sort of meaning though…

I also checked out the old monastery in Recoleta, now converted into a museum (but with a working church). Although the guide only spoke in Spanish, I gleaned off a bit of information – the monastery has many patios built in the style of Sevilla (the city in Spain), and it’s full of Catholic art of anonymous origin – usually from indigenous peoples who couldn’t be identified. Also, they have a 1400 year old cedar tree…although I might’ve gotten that number wrong! 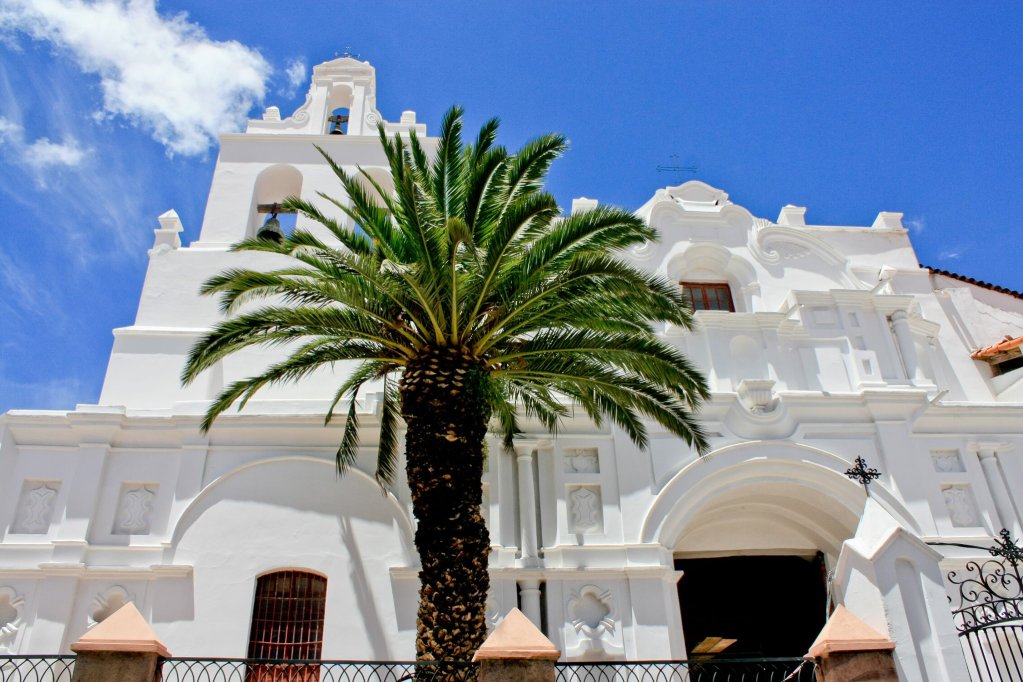 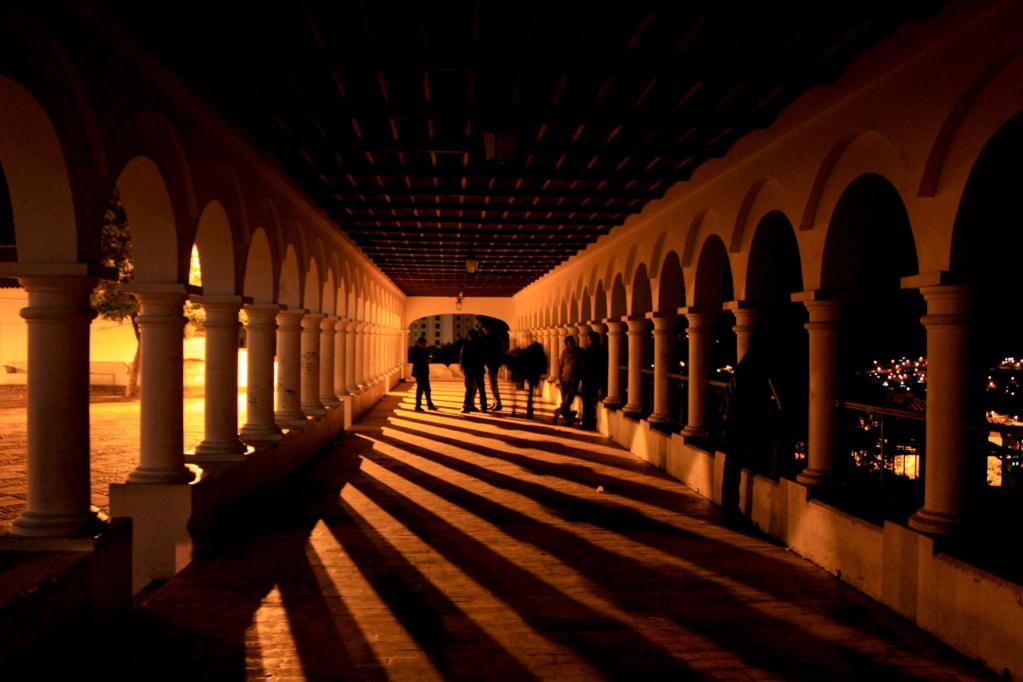 Dinner on day one – spluuuuurge. I wanted to try some local food, and Ebo, the hostel owner, recommended one of the most expensive places in town, overlooking Plaza 25 de Mayo. Still, under $10 for a meal of pique a lo macho – a giant helping of steak, chicken, sausages, tomatoes, green peppers, onions, and fries in a hearty brown sauce, slightly spicy. Wonderful, but so huge I couldn’t finish – even though I was very hungry! (I lost a bit of weight over the past week due to my altitude and indigestion problems on the Uyuni tour, and now that I’m feeling better, I’m just hungry all the time.) 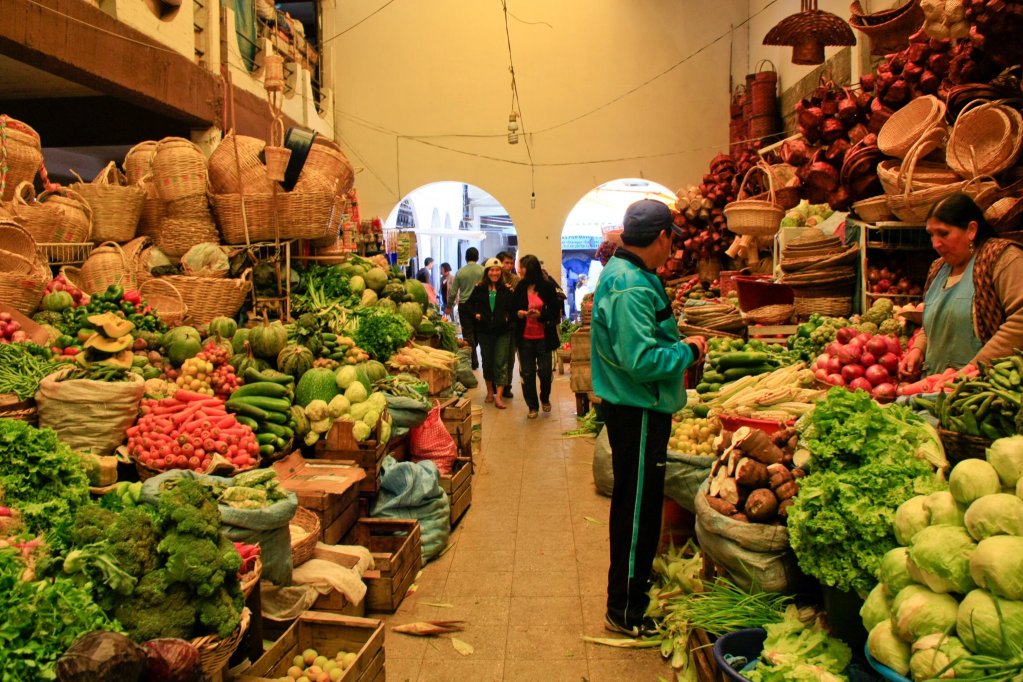 I can’t get over how much I love my room. It reminds me of the movie Ratatouille, when Remy moves in with Linguine and sees the amazing night view of Paris – only my night view is of Sucre, which is just as pretty at night. I just melt when I think about it! 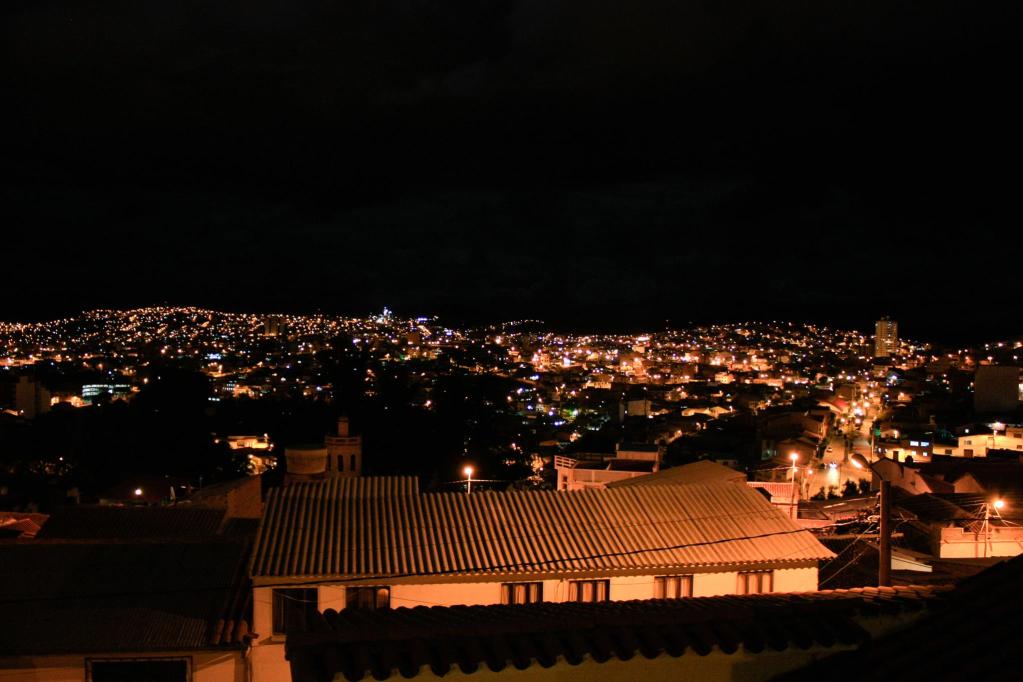 After a wonderful night’s rest – my first without an early morning wakeup call in over a week – I had a lovely breakfast prepared by Tania, Ebo’s wife and hostel co-owner – a giant bowl of fruit müsli and a giant BOWL of tea. Mmmm. Man, if I were to ever get the same thing in North America…that’d cost $15, not $4. Anyway, having seen most sights in the first day, I decided to take it easy for my last two days and enjoy the atmosphere.

The artesan shops here are full of colourful fabrics, like the ones Bolivian women use to carry things or their babies over their shoulders. The more touristy ones are also full of t-shirts with bad puns – Llama for Puma, Alpaca for Adidas, a coca leaf for Coca Cola, the “Llamasutra”, “Llamaha” (pronounced the same as “Yamaha”)… And yes, I bought one. 😛 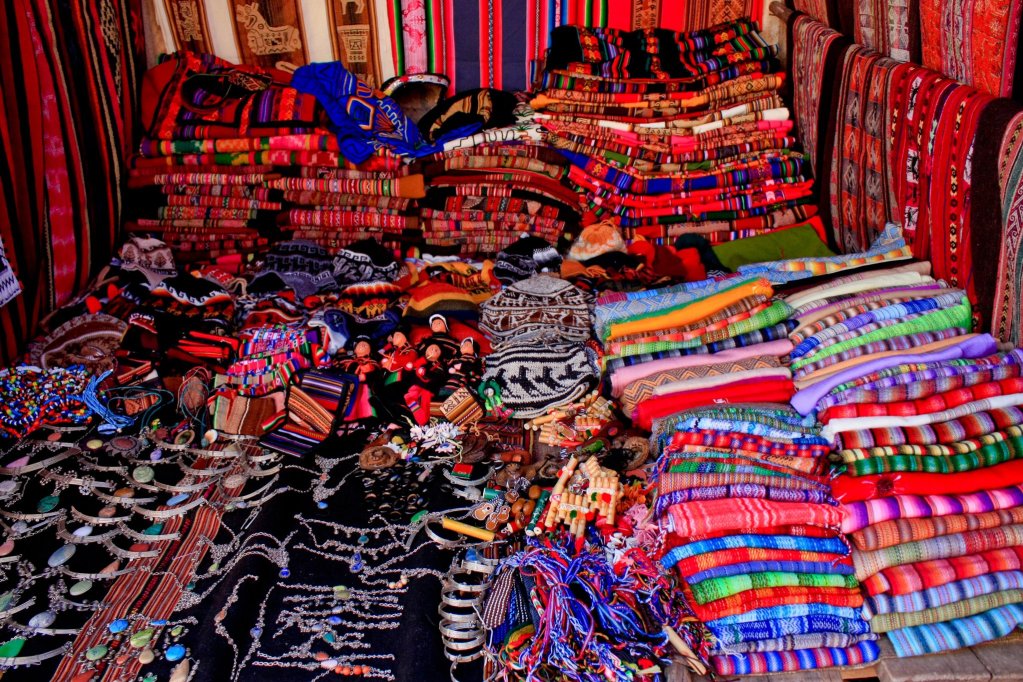 A quick reminder that it’s rainy season – I got caught in pouring rain without my rain jacket. But just like Singapore, it all passes in 20 minutes or so, and I made my way to MUSEF, the ethnography museum, featuring masks used in indigenous dances. They’re all bizarre, and some of them are scary enough, but being exhibited in a dark room really makes it the stuff of nightmares! Well worth the free visit.

On my last day, I visited the Casa de la Libertád, a museum covering Bolivian history. I was very glad to have gone with an English guide – loads of little tidbits. Bolivia’s had over 60 presidents in its 180 year history as an independent nation. Despite the constitution allowing them to serve for 5 or 6 years, and for multiple terms…they’re averaging less than 3 years per president. Also, their first constitutional president, whom the city of Sucre (born in Venezuela but of Belgian descent, which is why his name is French) was named after, served a little under two years before being forced out. Their second constitutional president, and fourth overall? He served just 4 days before being assassinated. Not an easy job! Revolutions happen here very often, though more in the past. Now, it’s just strikes all the time…like that bus strike that I managed to get around.

We learned a ton about Bolivia’s route to independence – how it joined up with what is now Argentina, and gained independence after a long fight as Alto Perú, before being renamed after the general Simón Bolivar. Also, there was a whole section on Bolivia and Peru’s war with Chile over the port city of Antofagasta, which they lost – Chile owns those now. Too bad that Spanish video was going a liiiittle too fast for me to glean off details. I could sense a *little* bias though, what with the paintings of supposed Chilean brutality…

To cap off my time in Sucre, I headed up to the Convento de San Felipe Neri – only accessible from a neighbouring school which you have to ring the doorbell for. Discreet. I’d never have known about it either, if I didn’t read it from my guidebook, since I had walked up and down that corner many times before.

But WOW! What a view. Being able to climb to the roof of the convent, which is in the central area of Sucre, and then being able to climb even further up to the bell towers? That view alone seals my love for the city. I only wish I had found it earlier, as I had to leave only after an hour to catch my bus. Goodbye peaceful city, hello La Paz…