That’s what the city’s shaped like, from altitudes ranging from 3100 m to 4058 m.  And maybe that’s why all the cholitas (indigenous women) here wear bowler hats instead of the ones you see in other Bolivian cities.  (Ba-dum-shhhh.)

All the good stuff is downhill in the center.  The poorer you are, the further uphill you live.  And these hills are bruuuutal.  At least there are micros that run super-frequently everywhere and every which way, costing only 2 Bs.

Arriving at 7:30 am after a 12 hour night bus, I was freeeezing and stayed in my hostel until the temperature rose from 0ºC to at least 10ºC.  (La Paz averages between around 0º and 13º every day of the year, despite the seasons.)  Well, that took until around 10:30 am.  I made a beeline through Plaza Murillo, where the presidential building is and all the other important stuff, crossed some pedestrian roads and a giant arterial– 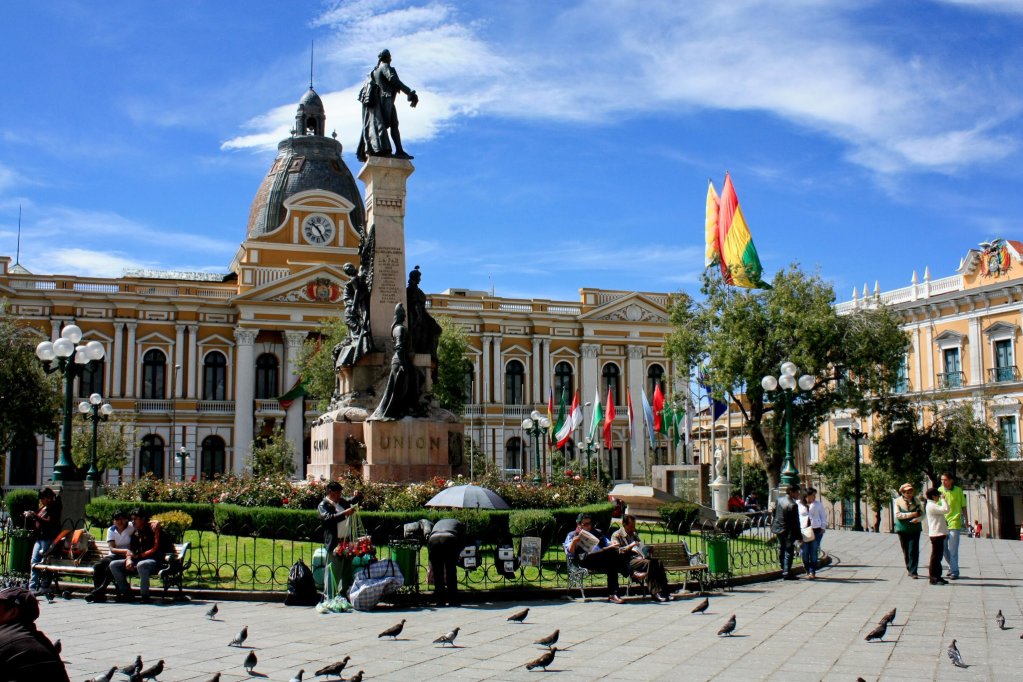 Oh yeah, La Paz is huge (it acts as the capital city of Bolivia, but constitutionally that title belongs to Sucre).  It’s the biggest city I’ve been in since Santiago.  But while I missed Sucre’s stately charms, La Paz has its own beauty and does look quite stunning, given its bowl formation.  It’s just crazy out there with the traffic and all – odd, since “La Paz” is short for “Nuestra Señora de La Paz”, or “Our Lady of Peace”. 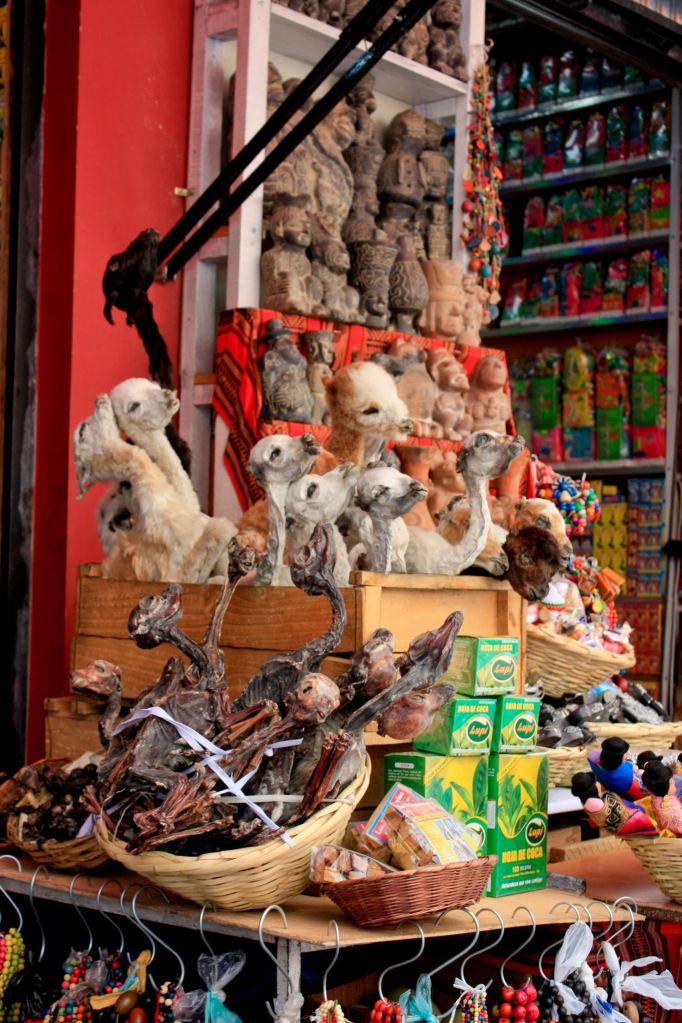 Anyway, I crossed over to the Rosario district, where most of the tourist infrastructure is – the hostels (not mine), gringo restaurants, travel agencies…but also some strange curios.  For one, the elephant in the room – Mercado de Hechiceria, or the Witches’ Market.  Spanning only a quarter block, it’s still immediately noticable if only for the things the cholitas sell – llama fetuses in particular.  These are used to inaugurate new buildings, buried below the front door or something like that, in Aymara ceremonies.  Other medicinal things and tchotchkes too…although I never was able to make any sense of them. 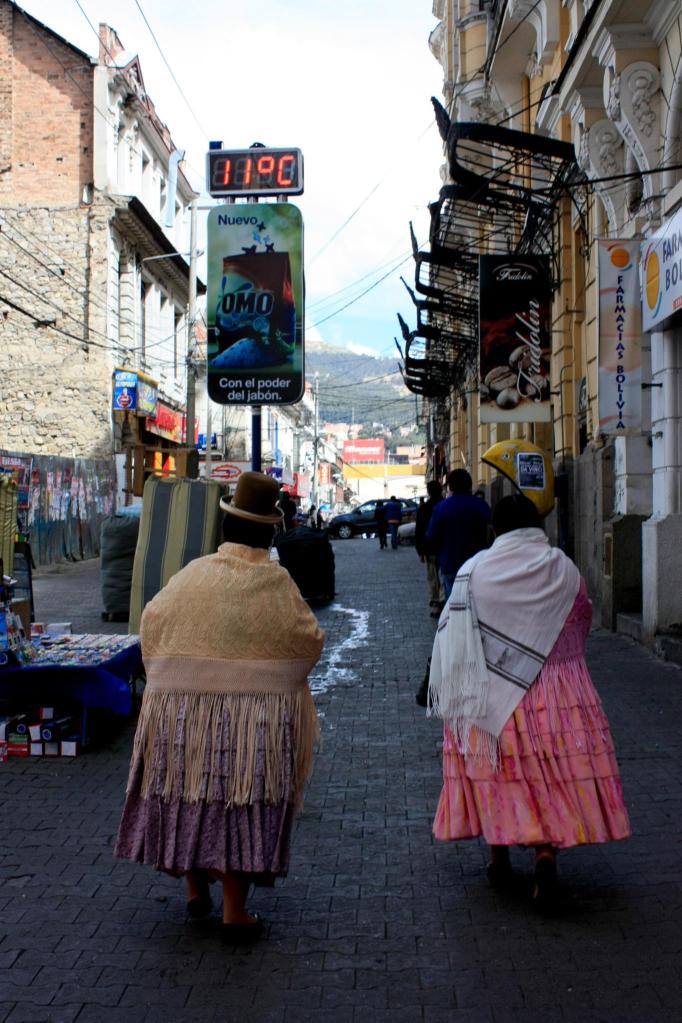 After booking my Sunday afternoon flight to Rurrenabaque, just down the block was the Museo de la Coca.  A small little museum started in 1997, it details the use of coca in Inca societies – not just as an energy-boost via chewing akin to how we drink coffee, but even in tumour-removing brain surgeries, centuries before Western medicine even though of using it as an anaesthetic!  Of course, when the West discovered its anaesthetic properties, coca became the miracle drug, and even cocaine was legal at one point…  Coca-Cola (now just using coca leaf as flavouring, but previously a drink with cocaine), wines with cocaine… Then Sigmund Freud ruined it all by being the first inhaler of cocaine and broadcasting its psychoactive capabilites.  Fast forward a few years later, some banker funds a study noting how dangerous coca is, and the UN clamps down.  Fast forward some more, and then the war on drugs.  The museum tries to be objective, and shows studies and scientific data, but it’s clear – they are well against the war on drugs, and they advocate treatment for addiction rather than ineffective eradication efforts and wars on gangs.  (As am I, and I didn’t need their convincing.)  They do mention that only 60% of coca grown in Bolivia is accounted for legally.  The other 40%?  Pretty clear, unfortunately…  Use of coca in manufacturing is legal for certain countries, but not Bolivia or Peru, the two main producers of the crop.

I then walked much further down the bowl, to check out Mirador Laikacota – La Paz is truly in an amazing setting, being carved right into the mountains, but with these insane hills, who thought to build a city here?!  Being hungry, I also had the record-cheapest meal I’ve ever had: a two course lunch of hearty quinoa soup and a chorizo on pasta and salad, for only 6 Bs – not only was it filling beyond belief, but it cost me less than $1!  And a big bag of maracuya (passionfruit) juice with a straw in it?  1 Bo.

Hill-walking is exhausting…especially once you have to walk up the hill again.  (At least I’m already accustomed to the altitude, or I would’ve just died.)  I needed to rest at my hostel for a few hours…and then I had a craving for Indian food.  And in a big city like this, of course you can get it!  (Well, British Indian food.  Not quite as good, but does the job.)  For a fancy meal though, that still hovered around $10.

On my next morning, I decided to check out the Musical Instrument Museum, with its exhaustive collection of instruments both Bolivian and worldwide!  Guitar-like instruments made of armadillos, turtle shells as instruments, pipes and more pipes…  They also had some very old drums, accordions, and even a harmonium you could play around with.  Shame they haven’t gotten more visitors though – no one else was around!

I also walked an hour all the way down the bowl (passing pretty much everywhere the Amazing Race went a few years ago, and I recognised it all!) to Mirador Monticulo in the more affluent Sopocachi district.  Much clearer view of the mountains…although the park’s strange structure led me to get lost trying to find an exit.  In the process, I stumbled upon a few too many clandestine couples making out, who were alarmed by my presence.  Oops!

Did not want to walk up that hill again to where I started.  Hailed my first micro.  Whoo.

Needing a thin long-sleeved shirt to deter mosquitoes in Rurre, I headed to the Mercado Negro (black market), hoping for some luck.  Nope.  Still, quite an interesting experience – one of the most claustrophobic markets I’ve seen, and on an unrelentingly steep slope.  Vendors seem to have a tendency to sell Puma shoes (seriously, I rarely see other brands) for about 500 Bs…not all that cheap, actually.  On my way out, I shelled out some money for at least something – for a blenderfull of papaya milkshake (5 Bs).  Okay, still food and drink. 😛

On the advice of a stranger at Mirador Monticulo, I headed up to Mirador Killi Killi around sunset, which was a grueling walk uphill – but worth it for a spectacular view of the city!  That bowl shape really is a bowl shape.  Lots of couples making out there too…  Being too cold, I headed down before dark and grabbed some dinner with Leo (Bolivia/Japan – turns out there’s quite a big ethnic Japanese population in Bolivia) from my hostel, who I ran into right where I decided to try some silpancho – a flat plate-sized hamburger over rice and potatoes, with tomatoes and onions on top. 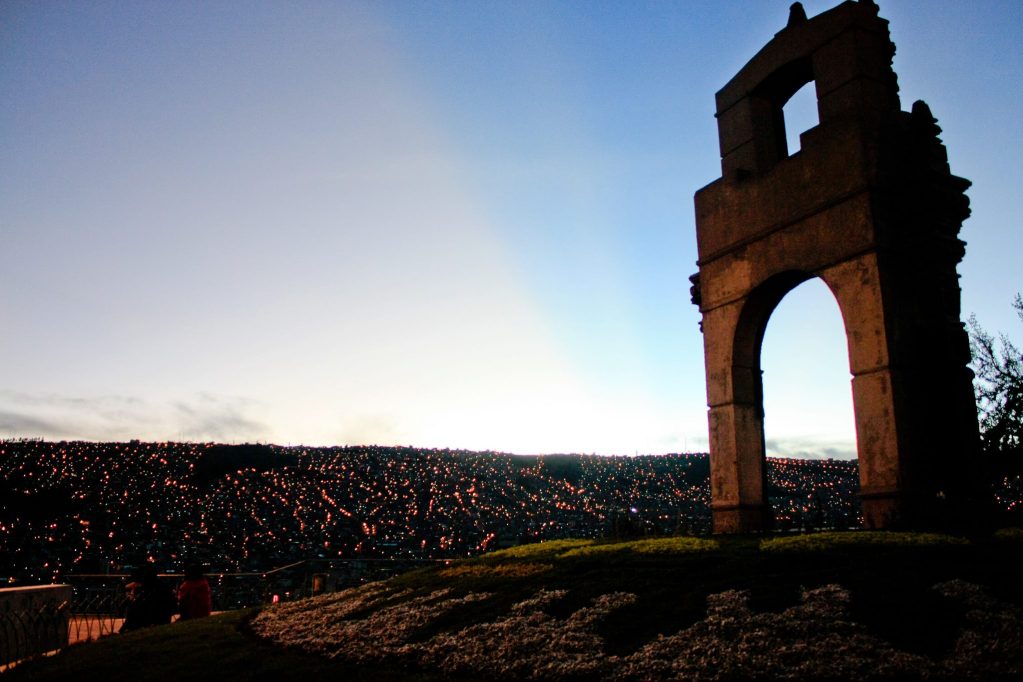 Since he hadn’t been to the mirador, I opted just to walk up there again with him after dinner.  Glad I did, since La Paz lights up beautifully – not so much the downtown area and the highrises, which were rather dark, but just the streetlamps and houses all perched among the sides of the bowl.  I was a bit lost in the dark though and took a much steeper route than necessary…  But again, despite the second strenuous effort, the view was worth it, and a nice close to my time here. 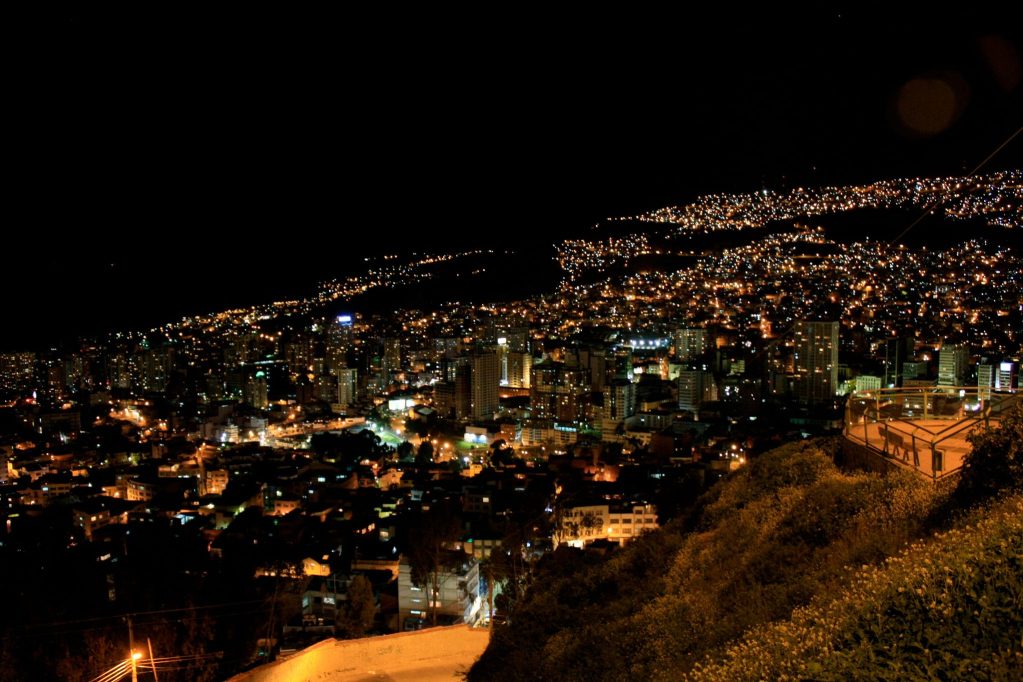