After hearing recommendations from other travellers (Andrew in particular, way back in El Chaltén, Argentina), I decided to make a three-day detour to Rurrenabaque, at the edge of the Amazon basin. The options? Bus for 24 hours (more on that later) or fly. Fly it is!

Well, I messed up a bit – my flight was at 3 pm, and I thought to myself to get to the airport at 1:30 pm, since the ticket says to arrive one hour early. What I DIDN’T read on the ticket was which airport – I ended up at the international airport, not the military one! Oops. With only 30 minutes to spare and a giant traffic jam, I grudgingly shelled out the extra 50 Bs to shuttle me there, just in time.

Except the plane wasn’t on time – we didn’t even board the plane until 4 pm. And zero semblance of security either! Well, a dog sniffed our bags (but not our carry-ons). Whoo.

After getting to Rurre and checking into a hostel, I met up with Silvia and Óscar again! They had just finished a pampas tour, having gone to Rurre upon my suggestion. They also introduced me to their friends Marlies and Florian (Swiss, German), who they met…on the bus to Rurre. Turns out their 18 hour ride from Coroico (a few hours out of La Paz) turned into 33 hours, involved a breakdown in the middle of the night, a breakdown in the middle of the day, a woman dying and the ambulance refusing to pick her up (so she started decomposing in the heat of the bus), bleeding dead chickens, a woman peeing herself inside the bus, a corrupt police officer threatening Silvia for a bribe by claiming she had drugs on her, and a landslide. Hey, I warned them…but ouch! Did not expect any of that to happen…well, other than the landslide. They recommended me the pampas tour agency they had, shared stories of the last two weeks over dinner, and then they were off to book a flight (of course) out of Rurre – we vowed to meet up again, all four of them, in Peru next week. Yay!

Oh, anyway, Rurre – haven’t mentioned that at all yet. La Paz was near 4000 m and cold, but Rurre is at 200 m and hot and humid! It was 33ºC, 40 with the humidity, when I landed. Great to watch the landscape change over the flight, from the Andes mountains down to valleys full of forests. In town though, everything felt remarkably like Southeast Asia…Laos specifically. The landscape of trees and karst-like mountains, the river, the heat, the motorcycles…and the omnipresent layer of sweat. Good to be back in that. Also, mosquitoes – toooons of them.

The next morning, I set out on a three day pampas tour. On my tour were Francis (US), Tor and Mikkel (Denmark; we were actually on the same mines tour in Potosí), and our guide, Oscar. After a three hour car ride to Santa Rosa de Yacuma, we headed onto our little motorboat on the Río Yacuma – immediately, we saw a pink river dolphin!

Twists and turns among what seems like bushes but are actually trees, paths through tall grass that are barely visible…I have no idea how the guides memorize how to navigate. And everything is different depending on the season too – it’s the wet season now, and the river is 7 m deep (the trees are flooded all the way up to the branches). In the dry season, it’s only 1.5 m, and sometimes they have to push the boats over dry land. 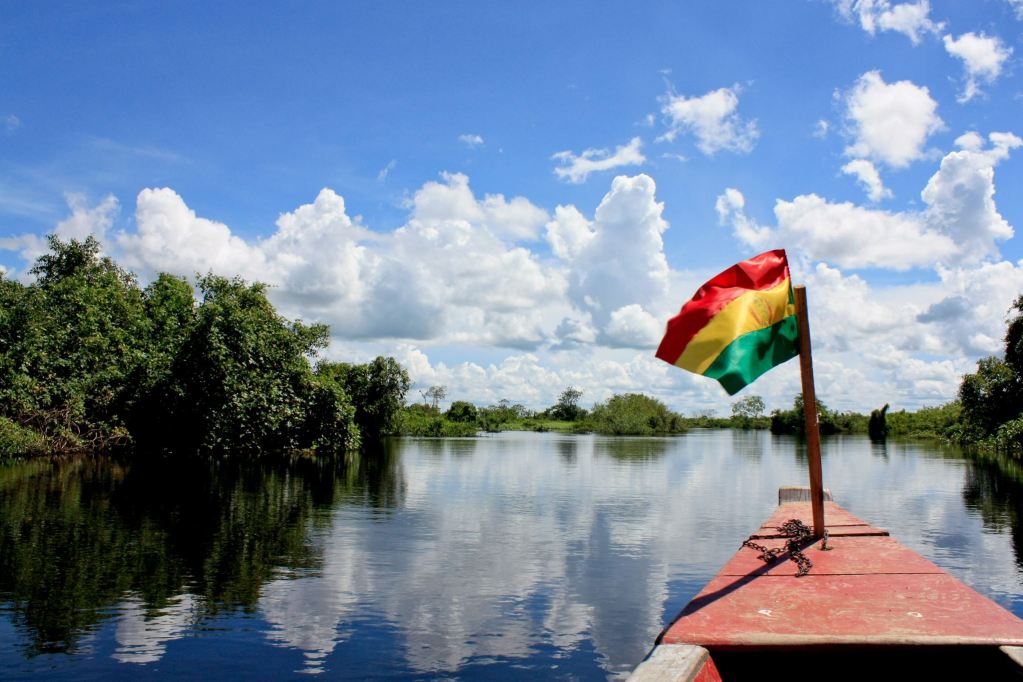 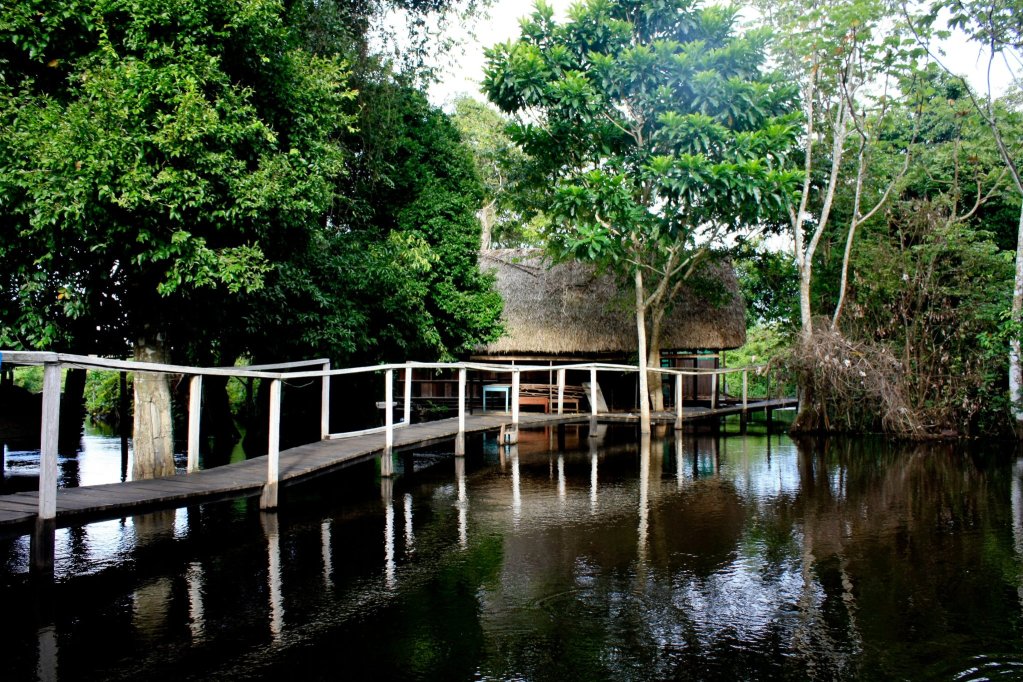 On a leisurely 2-hour ride to our accommodations in the pampas (each travel agency has their own huts set up on stilts), we saw plenty more wildlife – a tree full of squirrel monkeys who were eager to take any snacks we had, quetzals and tons of other giant birds I can’t remember the names of, turtles, another pink dolphin here and there… Oscar has eagle eyes; he seemed to be able to spot everything a mile away! He was born in and grew up in the jungle, and clearly knows and loves the area.

After a pleasant sunset at the lodge’s mirador-bar and dinner, we were taken in the dark to look for alligators and caimans – their eyes are extremely reflective, and glow like jewels when you shine a light on them. Not even a two minutes from leaving the lodge, Oscar spotted some eyes at a lodge under construction, so we disembarked and clamoured in the dark. Sure enough, we ended up spotting five or six – a mother and three babies, another large one, and a baby one that Tor somehow managed to spot – their eyes are so small, it was really quite hard to tell whether it was a gator! Oscar confirmed it though…and asked if we wanted him to catch it. And so he ran over to a log precariously perched on the water in the dark…and snatched it. Seriously! The baby was about a hand’s width long – obviously a little scared, and squeaking for its mother. Its teeth weren’t fully formed yet, but still slightly sharp, and its tail was quite strong – it gave a big flick whenever we touched it. Wasn’t quiiiite courageous enough to ask if I could hold it! 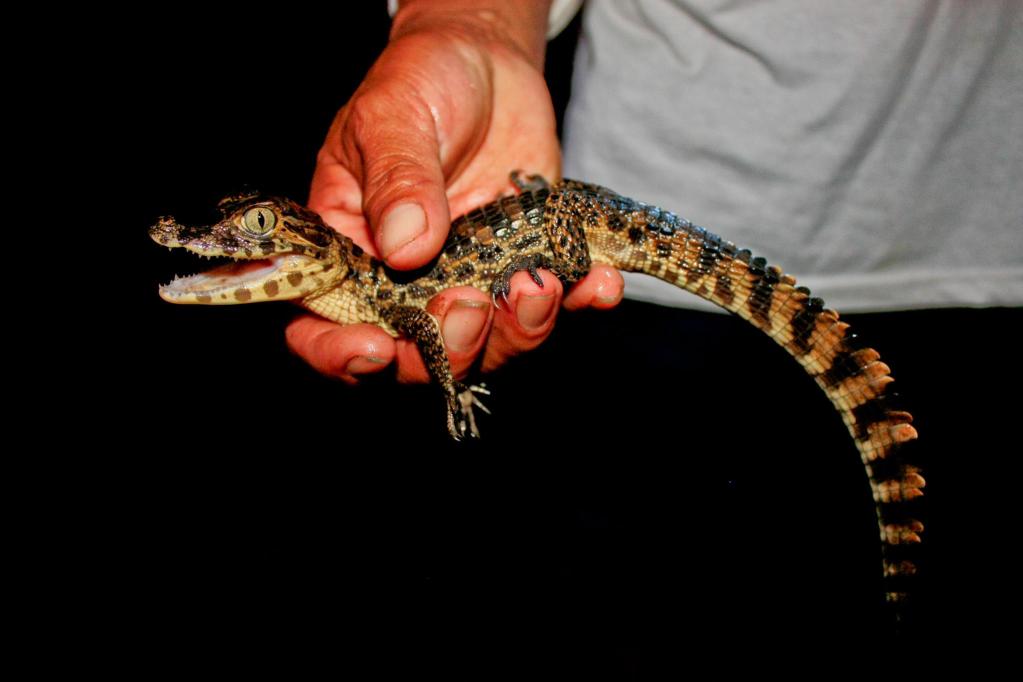 On our way back, Oscar opted to turn off the motor engine and go by paddling – and that was a treat we didn’t expect! The Milky Way loomed high above, but it wasn’t our only source of light. Fireflies were flickering everywhere around us, and there was the occasional flash of lightning in the distance, too far for thunder. And the noises…wow. Frogs, birds, gators, monkeys…who knows. Just a constant chorus of chirps.

Immediately upon returning to our lodge, we were invited by a group of Aussies and Kiwis also staying there to head to a bar – yes, bar hopping in the pampas. Turns out every lodge has a bar, but they were specifically talking about one with a pool table, a ping pong table, and ice cold refrigerated drinks! Absolutely necessary after a day drenched in humidity. Pool table was a bit warped, but still, plenty of fun. We returned to our lodge a few hours later, a little too afraid of mosquitoes to shower, opting to sleep under mosquito nets drenched in a mix of sweat, sunscreen, and layers upon layers of mosquito repellent.

After a shower the next morning (ahhh…nice…but I felt like I needed another one just ten minutes later), our first activity was to look for snakes, particularly anacondas, which are endemic to the area. We were taken to what seemed like an island, when we saw…an ostrich?! Yeah, an ostrich – their long legs let them run through the flooded pampas. Unfortunately, several hours of searching on a tiny patch of land led to no snakes (there’s just too much water), but we did spot an owl and a woodpecker. Also, some poor souls touched the trees – a big no-no, considering most of them are covered in fire ants. Ow.

We headed back to the lodge for lunch and a nice, long siesta on the hammocks. Oh yeah, there’s a caiman living at our lodge, hanging out in the water just centimeters from us all the time, and the staff named him Pedro. He’s not a very threatening caiman. The lodge owner’s 4-year-old kid, Rafael, was playing with him! Oscar would even tap him on the nose to get him to open his jaw, while we just threw him scraps of food. Pedro would clamp down, but he often missed clumsily. Kinda hilarious.

Our afternoon activity was to go piranha fishing! Oscar found a nice, shady spot, and we set up shop, using beef as bait. Nibble after nibble…then full on bites! We (well, mostly Oscar, but Tor and Mikkel had quite a few too) caught a total of 12 – I only contributed one, but at least had a few close calls. Most of the fish were biting near the front of the boat, and I was sitting in the back. Also, I ended up getting my line caught on some branches, and lost my hook, with no replacements available. The piranhas…it’s pretty obvious, they have VERY sharp teeth. We had a few grilled for us for dinner – delicious, but small and quite bony. 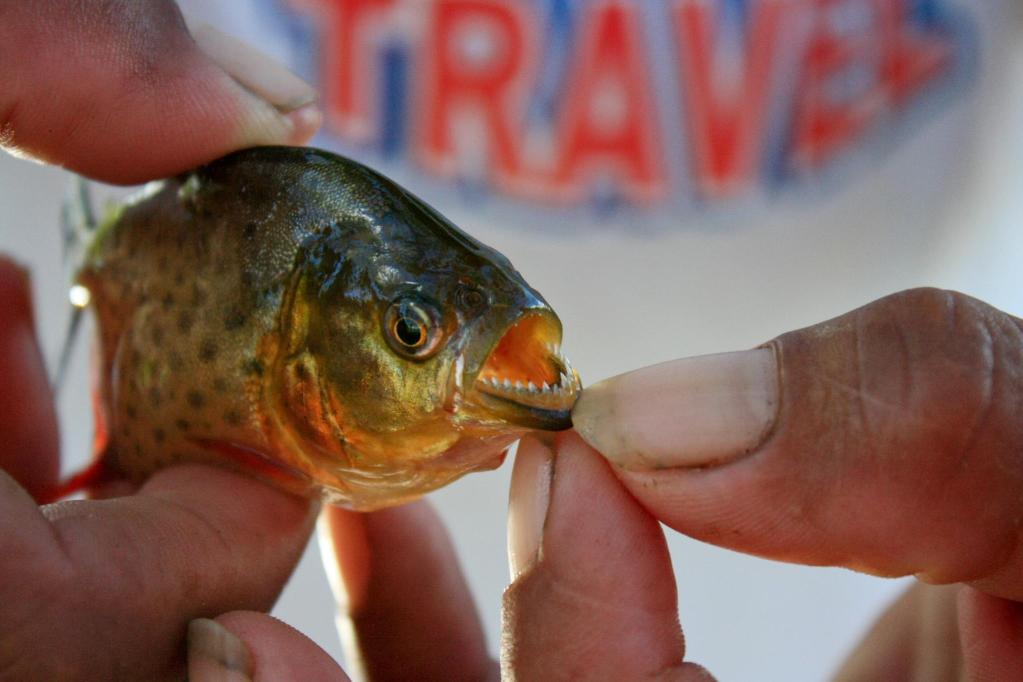 Despite feeling sticky all the time, it’s really quite nice to sleep in this environment. The chorus of animal sounds are really quite something.

Our last activity, the next morning, was to go swimming with the dolphins. We were taken to an open spot of water where there were many dolphins – and indeed, there was one boat already, tossing an empty bottle attached to a string onto the water. A long pink snout would stick up nearly every time, poking the bottle playfully! More dolphins approached as they heard our motor, looking to play around. 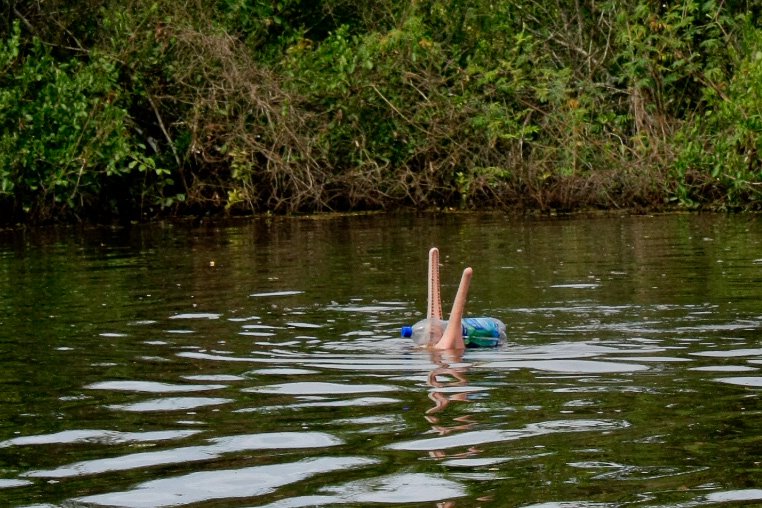 The river water was brown and a little bit oily, given the boats…eww. But we all opted to jump in anyway! Unfortunately (or fortunately, depending on how you look at it), I was never approached by a dolphin…but Francis, Tor, and Mikkel all got nibbled on the legs. Fun, but kinda freaky, considering you can’t see anything in the murky water. The dolphins were very playful though and clearly enjoyed the presence of a few people – they blew their holes often, swam in circles, and sometimes even surfaced right beside our boat.

But then soon enough…ah yes, the unavoidable. Five boats of giant groups of loud Israelis. I really hate ragging on them so often, but they seem absolutely un-self-conscious – and this is what I and other travellers find consistent among all groups. (The ones that travel solo, or if you get to talk to one or two of them out of a group though – they’re nice. It’s just the collectives that are problems. There are so many of them that even their local guides speak Hebrew.) In such a peaceful environment, yelling and screaming and splashing and cannonballing out of trees bothers the wildlife and other tourists. So yeah, they pretty much scared all the dolphins away, and so we left a little earlier than planned.

Just before packing up our bags and leaving our lodge for the last time, I noticed some howler monkeys in the trees. With the aid of Rafael, who is clearly used to their presence, we had a field day feeding them bits of bananas and watching them approach us tepidly, then eventually fight it out. Apparently, the occasional splashing we hear at night is of monkeys unlucky enough to fall into the water and become prey for Pedro, but I don’t know if I believe that, given how clumsy Pedro is…

We flew back to La Paz on a different carrier than the one I used before – the plane is so small that the cockpit is two arms’ length away from the first seats (and visible!), and you have to crouch to walk and get into your seat!

This was a lovely and very worthwhile detour, but I’m glad to get out of the sticky heat and the clouds of mosquitoes (though I managed to escape with only two bites on my foot – a miracle, considering that Silvia, Óscar, Marlies, and Florian seemed to have fifty bites each despite spraying themselves often). I’m now back in the cool climate of La Paz, and hopefully I can find my passage out again tomorrow!