Leaving Rurrenabaque well sunburnt, it was time for more sun – Isla del Sol, that is.

Having made the mistake of buying an open flight ticket with TAM for my return from Rurrenabaque to La Paz, then not using it (it was either wait two days and use it, or fly with Amaszonas, which is what I did), I needed to refund my ticket at the agency I bought it. Unfortunately, the opening time meant that I would miss the tourist bus to Copacabana, the access point to Isla del Sol. The more unfortunate thing? The refund was only 70%, so I lost about $18 for nothing but more hassle.

I then took a local bus to Copacabana, which costs less than the tourist bus…but considering that I needed to take a taxi to the bus company (in a dangerous area, no less), I ended up having to pay more. And the bus took an extra hour too, whoo! It was an excellent ride though, hugging the coast of the stunning Lago Titicaca, one of the largest high-altitude lakes in the world. The road was mountainous as is normal for the Andes, which made for plenty of great viewpoints of the lake. Little communities, farms, random crops growing right by the water, boats…

After arriving at 4 pm and checking in at a random hostel that was a little too expensive (I had no booking, and I was too exhausted to shop around), I went for the lakeside food stalls for lunch. The specialty here? Trucha – trout. For only 20 Bs ($3), I had an excellent lunch of fried trout with lemon, fries, rice, salad, and pop…and a great view of the lake, to boot!

There’s not really much to the town of Copacabana; it’s small, and most shops are geared towards tours to the lake’s islands. There was a cathedral made of tile though (quite unusual), as well as a mirador half an hour’s walk up – but after I went to check out the cathedral, clouds rolled in, and I opted out of an uphill walk for little reward.

I didn’t have such a great afternoon, despite having good company – I ran into Liz and Adam from Australia, who were in my convoy during the Uyuni tour. I had a good chat with them and their new friends whom they met on the boat returning from Isla del Sol…but I was feeling under the weather. Even dinner and live music later on didn’t help, nor did the freezing cold shower! But…private room and TV…at least there’s that.

I woke up early the next morning, packed a small bag, and headed to the boat to Isla del Sol – a scenic 2.5 hour ride on a slowww boat. Copacabana was cloudy and on the verge of rain, which didn’t give me much hope, but upon arriving at the north coast of Isla del Sol…sun. Just sun. It’s like a microclimate there! About two minutes before disembarking, a French woman dropped her bag off the boat by accident – it floated, thankfully for her, but we all had a good laugh.

Upon disembarking, everyone seemed lost…so I teamed up with four people from my boat – Lori and Juliana from Sao Paolo, and Gabriel and Patricio (software engineers, yay!) from Santiago. Cue Spanglish hijinks (the Brazilian girls could only speak English and Portuguese, and Patricio only Spanish). At this point, the weather cleared up so well that we could see the lake’s true colours – a deep blue worthy of a beach resort, if only it wasn’t a bit chilly! In the distance, many little islands, all mountainous, and even further in the distance, more mountains in both Bolivia on one side and Peru on the other. 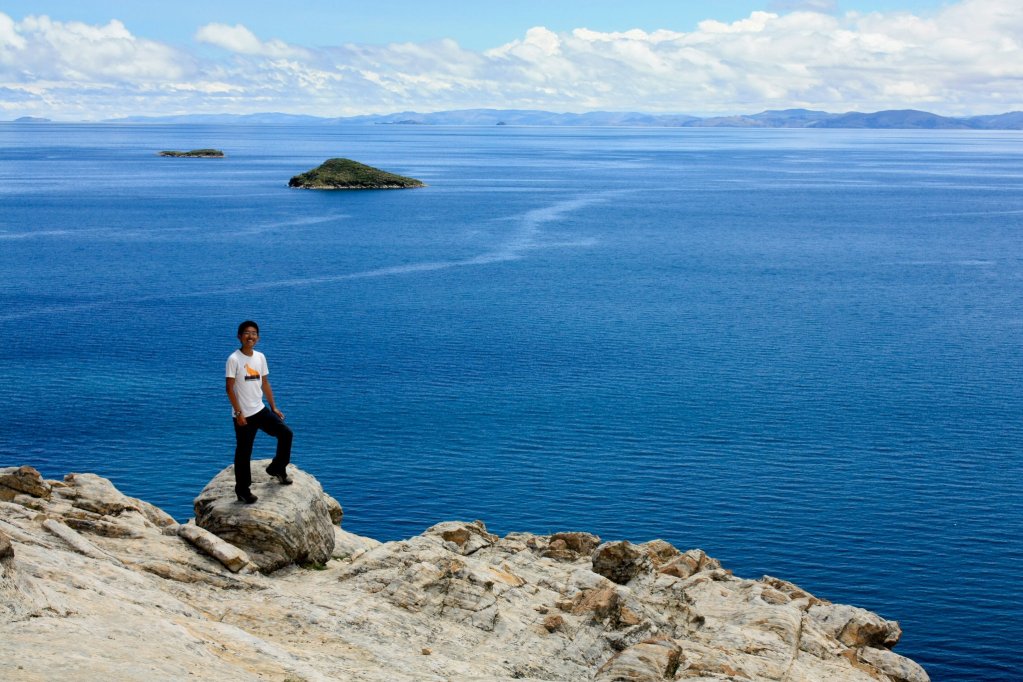 Since the four of them were only staying on the island for two hours, we went straight to the sites in the island’s north. After a museum that took all of two minutes due to its boringness, we walked uphill for about 45 minutes, where I saw my first Inca ruins!

Isla del Sol is famous for being where the Incas claim Viracocha, their creator god, first appeared, and also the birthplace of the sun. We saw the mesa sacrificio (sacrifice table) and a labyrinth that appeared to be formerly inhabited – why people lived in a maze, I don’t know why! There were other ruins, but they were so small that even after walking past them twice according to the map, we missed them completely. Nevertheless, the scenery was so stunning and almost distracting to the point that we didn’t care! Almost all of the island is terraced, which is an amazing feat given how steep it is.

After saying goodbye to the four, I walked on my own to the south of the island, about three hours. Complete solitude and near silence…quite a peaceful experience, only marred by the many “village entrance fees” I had to pay simply to walk on the path! Oh, also, forgot the sunscreen. More burning, yay! 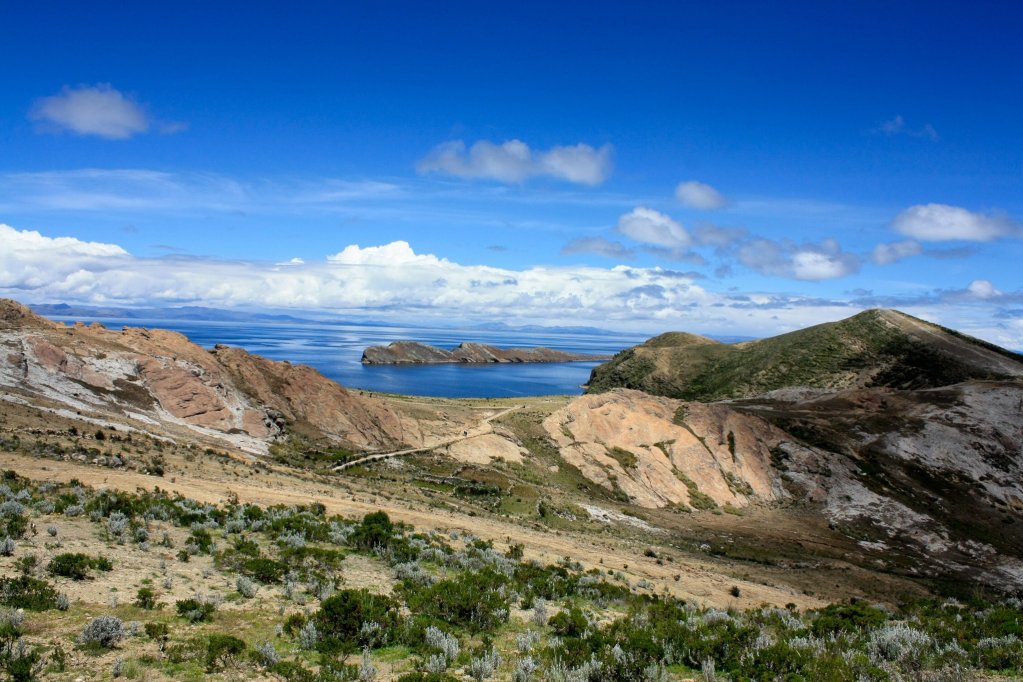 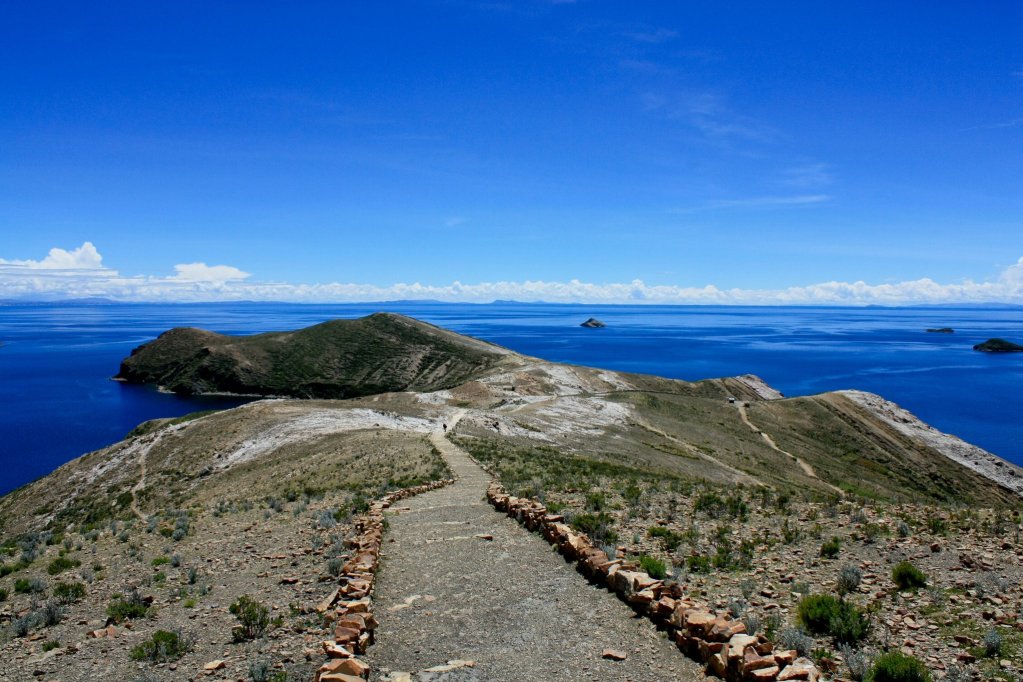 About twenty minutes until the end (the village of Yumani), I met Esteban from Buenos Aires, who was quite eager initially to practice English with me (and for me, my Spanish). He introduced me to his friends waiting right outside of Yumani: Leo and Marcelo. Initially mistaking me for Japanese (of course), after I corrected them and drew out a little geography lesson on the ground, they all (Marcelo especially) started calling me “Japón” for the next two days, just to bug me. Oh, I love Argentinos. 😛

We decided impromptu to team up to find a hostel, and a little girl from Yumani was only too happy to help, bringing us up and down the hill. After a bit of searching though, I ran into two other girls from my boat – Sky and Erica from Australia – and they directed us to a hostel for only 25 Bs a night per person, owned by a very lovely indigenous lady. Since it was low season, virtually every hostel and restaurant (all pizzerias?!) was running empty, so everyone seemed eager for business.

Yumani is a small cooperative community – despite its slightly touristic facade, people there clearly have real lives and look out for each other. Of course, given their somewhat isolated nature from the modern world. (No vehicles on the island, and electricity and water are scarce. Everything must be brought in from Copa by boat, and those boats aren’t big.) Donkeys, llamas, and people all carrying loads of stuff passed us up and down, and they were all friendly. It was lovely to experience and watch – slow, peaceful lives. I’ve heard the same things from other communities on the island.

We joined Sky and Erica for drinks at a restaurant with a view to die for – then again, every single building in Yumani was situation with an amazing view, given its location on a ridge. And then…oi. Esteban, Leo, and Marcelo largely only speak Spanish, are quite fun, but clearly flirting. Sky and Erica only speak English. So I sat between and became the awkward translator who sometimes couldn’t or occasionally refused to translate anything vulgar! 😛 Much of my translation to the girls was just simply rolling my eyes. (Argentinos: “We are religious…except when travelling.” Then they look to score as far as possible.) We spent a lovely few hours laughing and talking over Pringles, Coke, and wine. 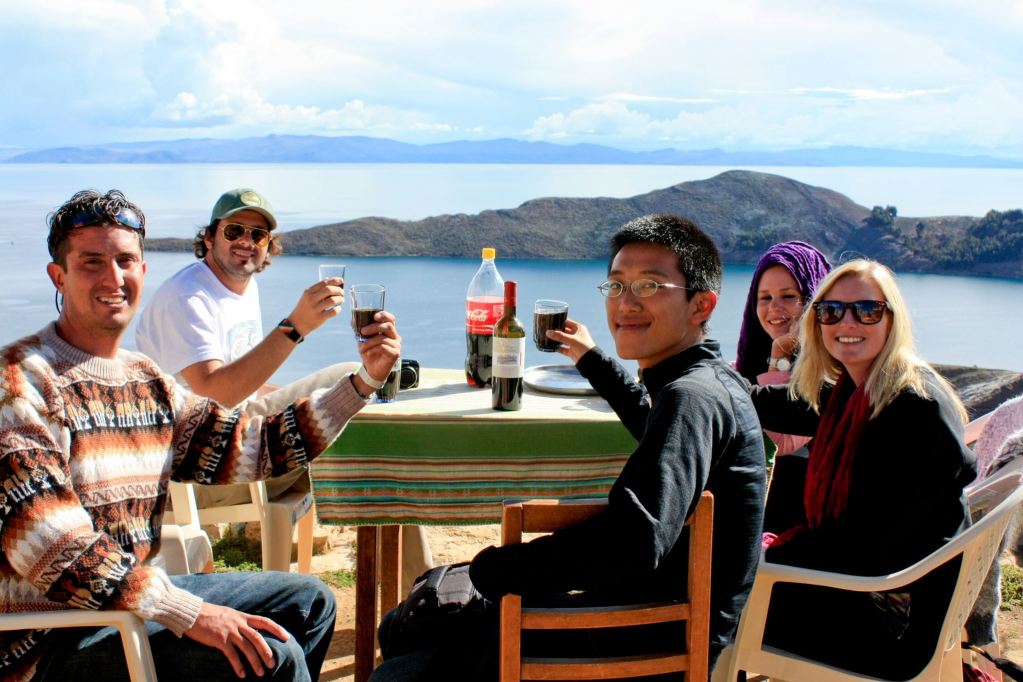 Then…what? The Argentinos, who brought fishing rods, suggested we go after dark to try to catch some trout. Erica and Sky agreed to join us after they ate their dinner – as is usual for Argentinians, they opted to eat late, after fishing, and thus I joined them despite being extremely hungry. So we clamoured down from Yumani all the way down to the coast, a steep walk downhill that took half an hour, just as it was getting dark. (Oops, missed the sunset.) Passing locals told us there were no fish, but we kept going anyway!

Well, sure enough, there were no fish. Somewhat amusingly, the Argentinians carried a joint, some whisky, and some mint liquor (all of this smelled kinda repulsive), and offered it – all of us refused. We stayed for about 40 minutes, appreciating the silence (except for the soothing sounds of Leo and Esteban casting their lines) and the Milky Way above. However, Sky and Erica were getting tired, and I was extremely hungry. Marcelo accompanied the three of us to return to Yumani, but it was so dark that even with two lamps, we had no idea where we were going. It took us over an hour to reach Yumani, but instead of taking the original path we had, we were literally climbing up random terraces and walking through mud and bushes, stumbling in the dark. We had plenty of help from Marcelo, who pulled us three short people up many terraces. Exhausted, we finally arrived at 9, and I chowed down on some amazing pizza with Marcelo at 9:30 – considering all I had eaten all day was two cookies for breakfast and a tiny burger at 11, I was starving. Esteban and Leo didn’t return until 11, and they didn’t catch anything – unfortunately for them, every place was closed and so was our hostel kitchen, so no dinner for them either. Yikes! Nevertheless, it was a worthy and fun misadventure for all. (And no scoring for the Argentinos, to their slight dismay.)

In the morning, despite waking up early enough for the early boat back to Copacabana, we just decided to dawdle around until the 10:30 boat. While Leo and Marcelo had their breakfast of mate (what else?), I had breakfast with Esteban, and we had a conversation over religion, politics, and random life stuff in general – not only was it great to get a sense of how things are in other countries, but I surprised myself with the random Spanish I pulled out! Hooray for small steps. 🙂 The four of us chilled out at a restaurant near the boat dock, enjoying our last hour of island peace. (Now why is La Paz the place called Paz again?!)

On the boat ride, I finally came up with a retort to “Japón” – I started calling them Chilenos. Hehehe.

Then came the exodus – arriving in Copa at 12:20, I needed to get my things that I left at my hostel, withdraw money (not easy on a Sunday, no agencies accepting credit cards, and only one ATM in town), buy a bus ticket to Arequipa (Peru) for 1:30 pm, and eat lunch. I accomplished all those things with about two minutes to spare. A quick goodbye and a promise to keep in touch with the Argentinos, then goodbye Bolivia…

The last two and a half weeks in Bolivia have been a ride, with far more destinations than Chile or Argentina, but far less time to take a breather. Overall, it was a different experience entirely – while I got to know the people in Chile and Argentina more, I didn’t get many opportunities to communicate with locals in Bolivia, other than tour guides. Furthermore, I spent a ton more time on tours than independent travelling, and when travelling independently, I was truly alone, meeting few people in hostels. The sights, however, were more than numerous, the food and juice all great (though I did have perpetual stomach problems for my entire 2.5 weeks, either due to altitude or the food), and spending was beyond cheap. Pros and cons, yes, but still absolutely memorable, and with so much I’ve missed (Death Road, Huayna Potosí, Cochabamba, Santa Cruz, Oruro…the list goes on), a return to Bolivia some day definitely can’t be ruled out!

One thought on “Paz”