I’m hungry but bloated, suffering from doxycycline-induced acid reflux, can’t eat, and feeling weak. This is supposed to be one of the driest places around, especially in dry season. Oh look, it’s actually cold. And it’s starting to rain — maybe the one day in a year this happens outside of the wet season. Can’t catch a break. Why am I walking three hours up a rocky volcano in the dark?

So maybe I’m embellishing a little here, but let’s go back a little. The Danakil Depression is one of the lowest places in the world. It’s known for its extremely hot climate (typically 51°C in August) and extreme inhospitality, with little to no shade anywhere.

But Danakil also has another geological anomaly in its possession: Erta Ale, at an elevation of 613m, contains one of the very few accessible lava lakes in the world. “Accessible” is a bit of a stretch, though it’s far more accessible now that it ever was, with new roads winding down from Mekele and the highlands that I’ve spent two weeks in, all the way to the Eritrean and Djibouti borders. That road only gets you so far though, since your 4×4 will have to drive off-road in the most off-road of terms: on extremely bumpy volcanic rock. Several hours of it, with little but direction to guide you, since there isn’t actually a road. And if you get the very unusual unseasonal rain we did, your 4×4 will also need to be able to cross new rivers. As I lay sick in the front seat offered by my kind tour- and vehicle-mates Rosie (who I’ve been travelling with since the Simiens), Martin, and Thomas, they rattled and collided with each other in the back. 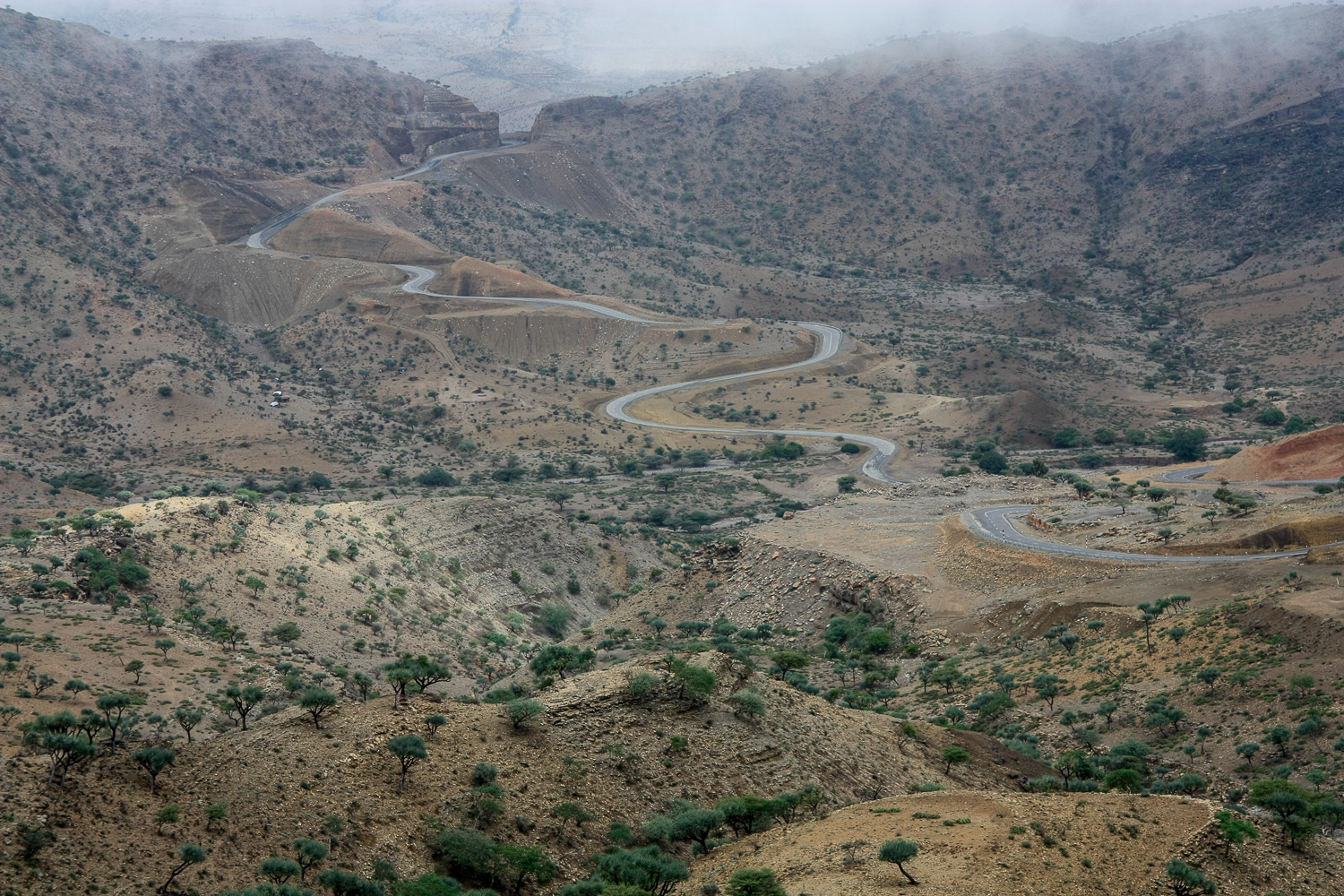 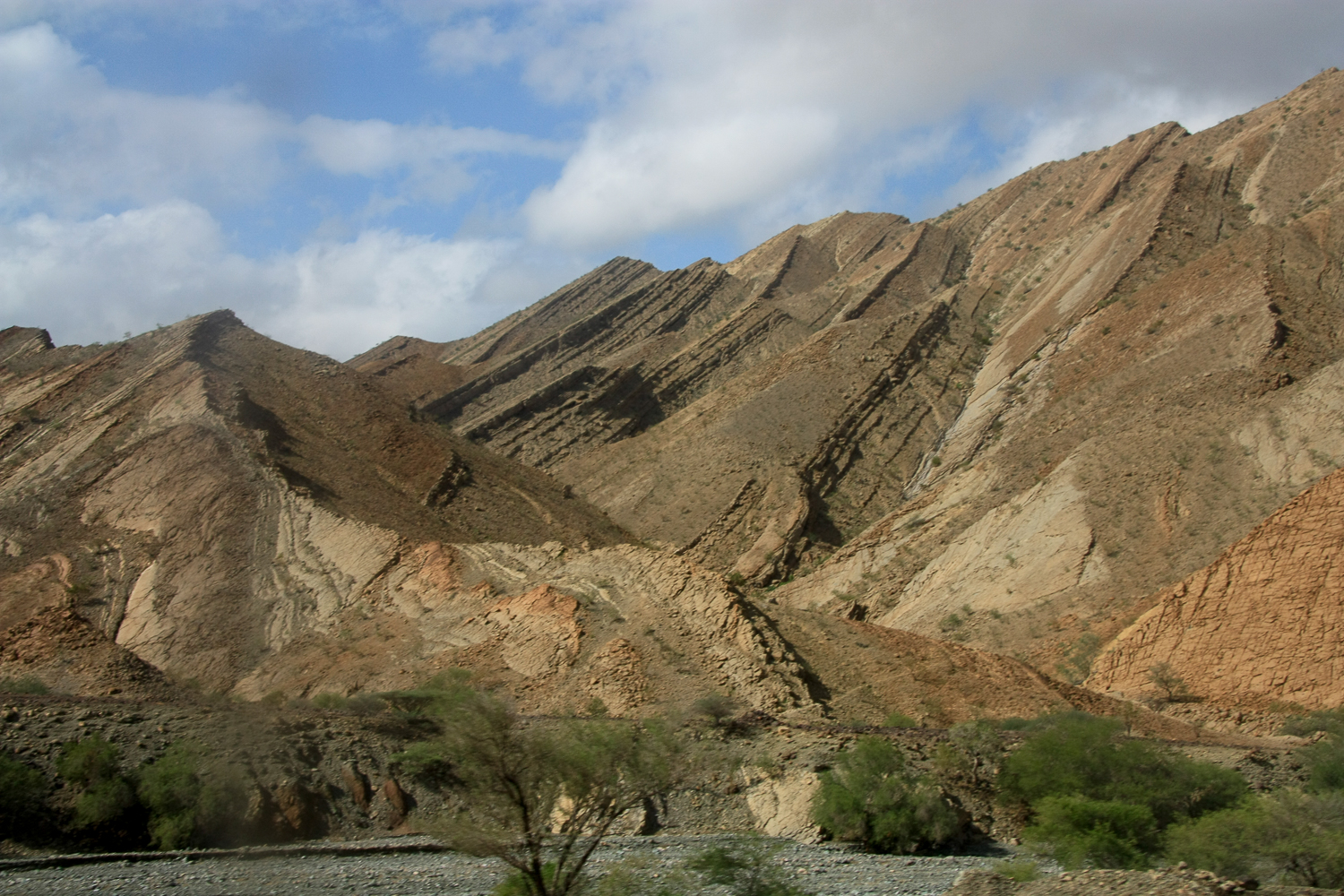 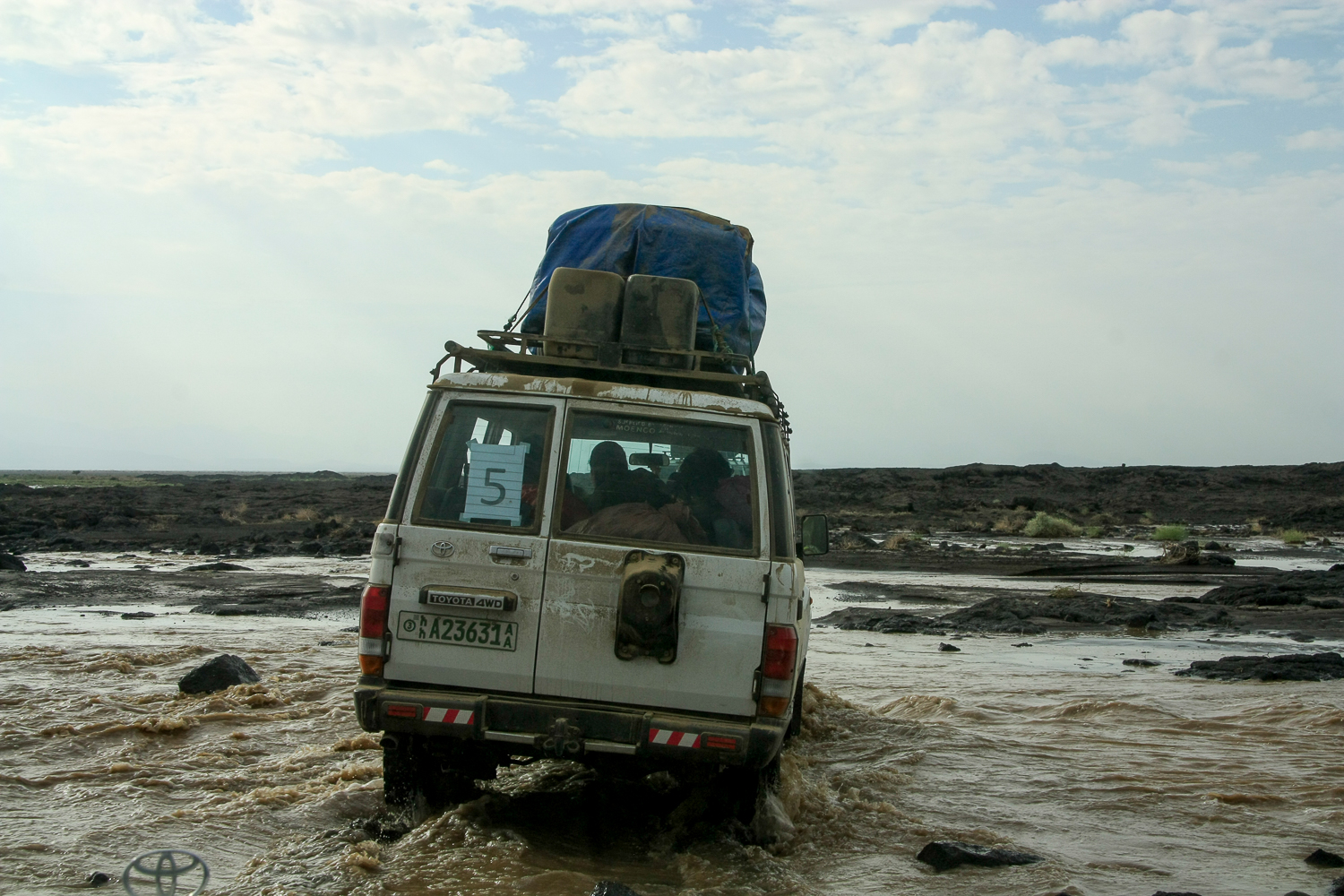 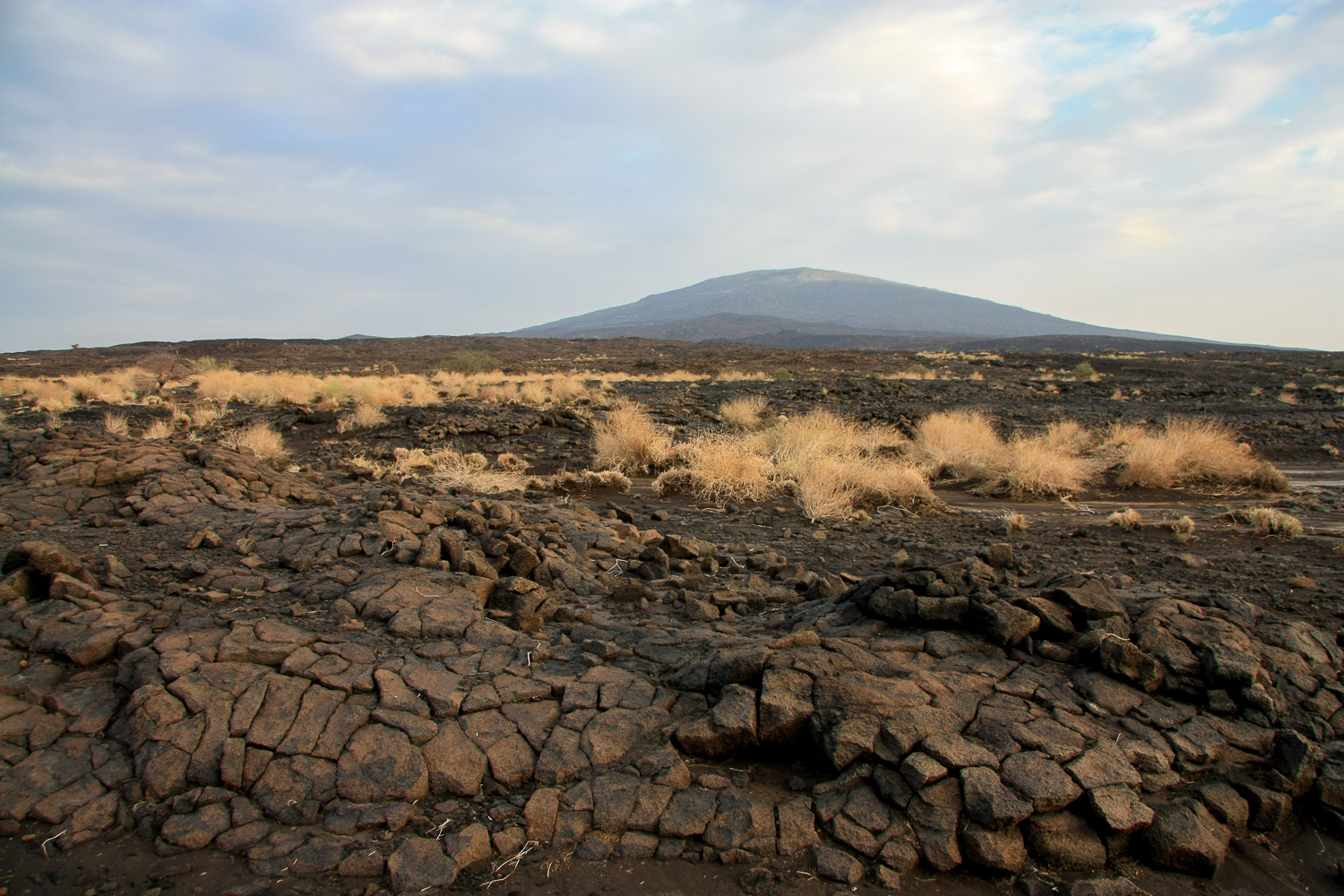 Yet out in this completely barren landscape of sharp, black volcanic rock, the Afar people have set up pastoralist villages. I’m not entirely sure what they’re doing out there: they’ve got their children running around barefoot, chasing the passing trucks and asking for caramel. Their camels have nothing to graze; they wander far far off in search of bushes in the sand. I never got a proper answer to that. 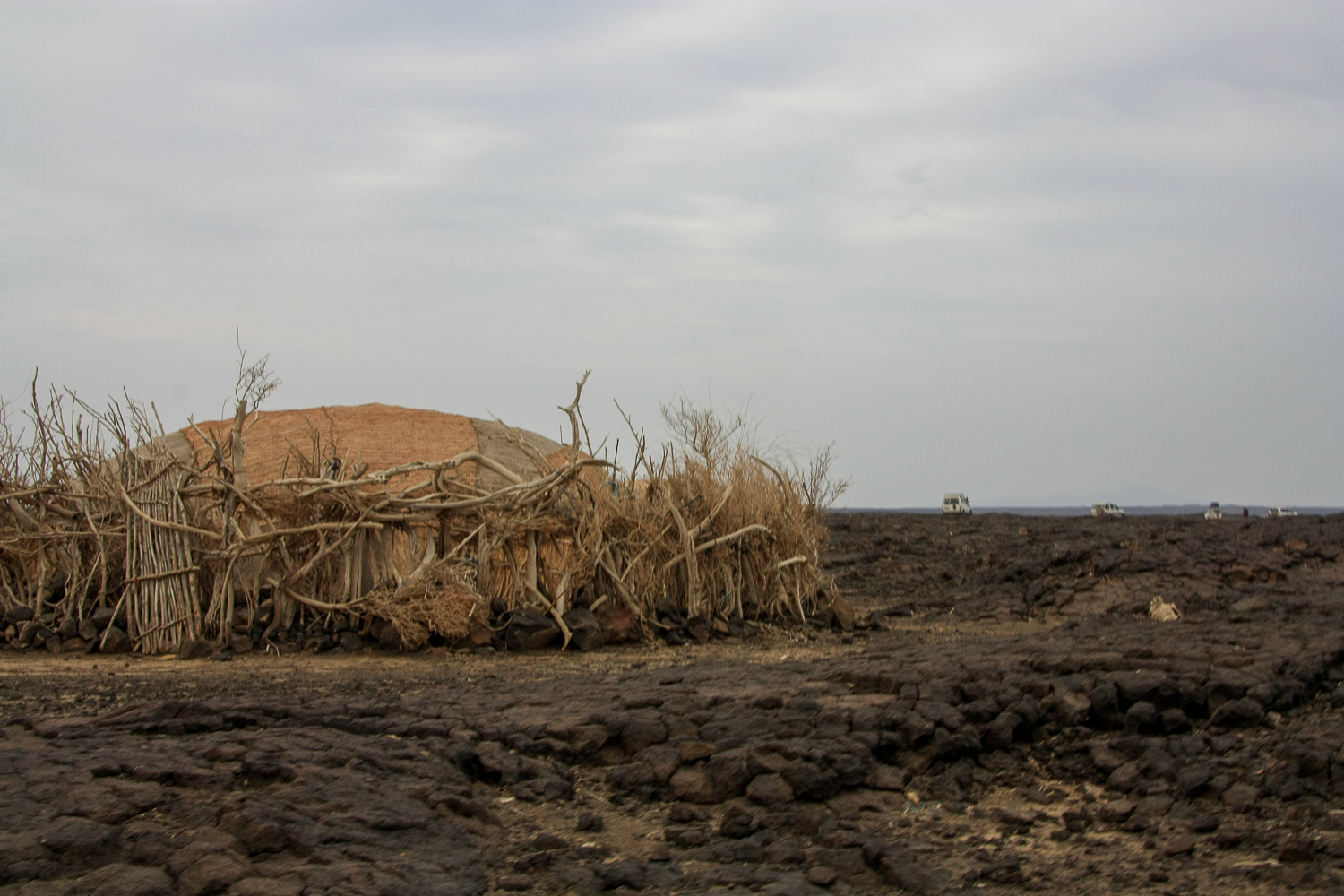 Some of the villages we stayed in had shelters and little else, constructed by either the Afar or the military. No toilets (not even long drops) or garbage disposal made them rather scruffy messes strewn with litter, and I’d imagine a somewhat depressing place to live. The military are ubiquitous due to the ongoing Eritrean border conflict; five tourists were killed and a few kidnapped in 2012. While their presence is welcoming, their living conditions (which we shared) were quite lacking, a surprise for such an important job. 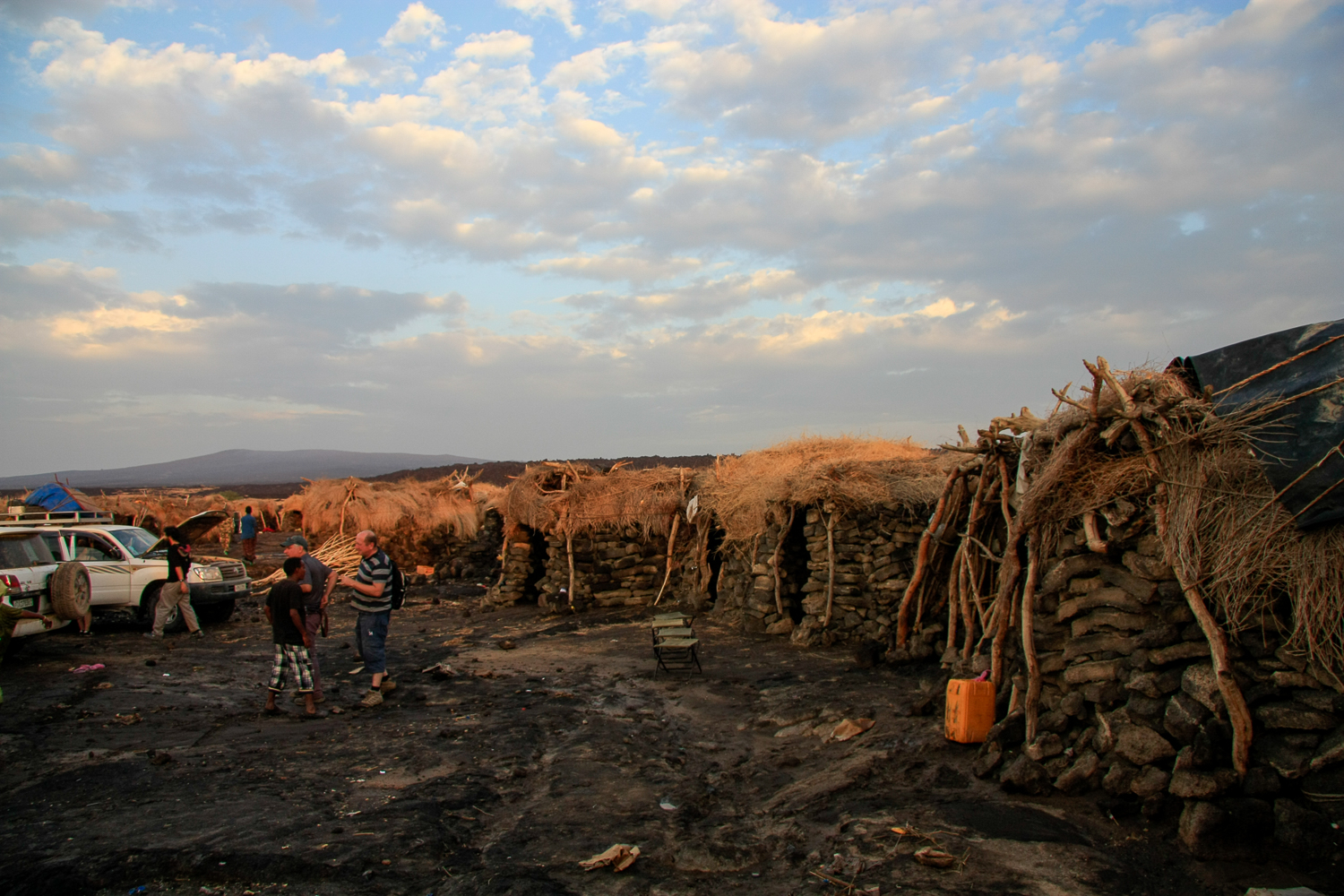 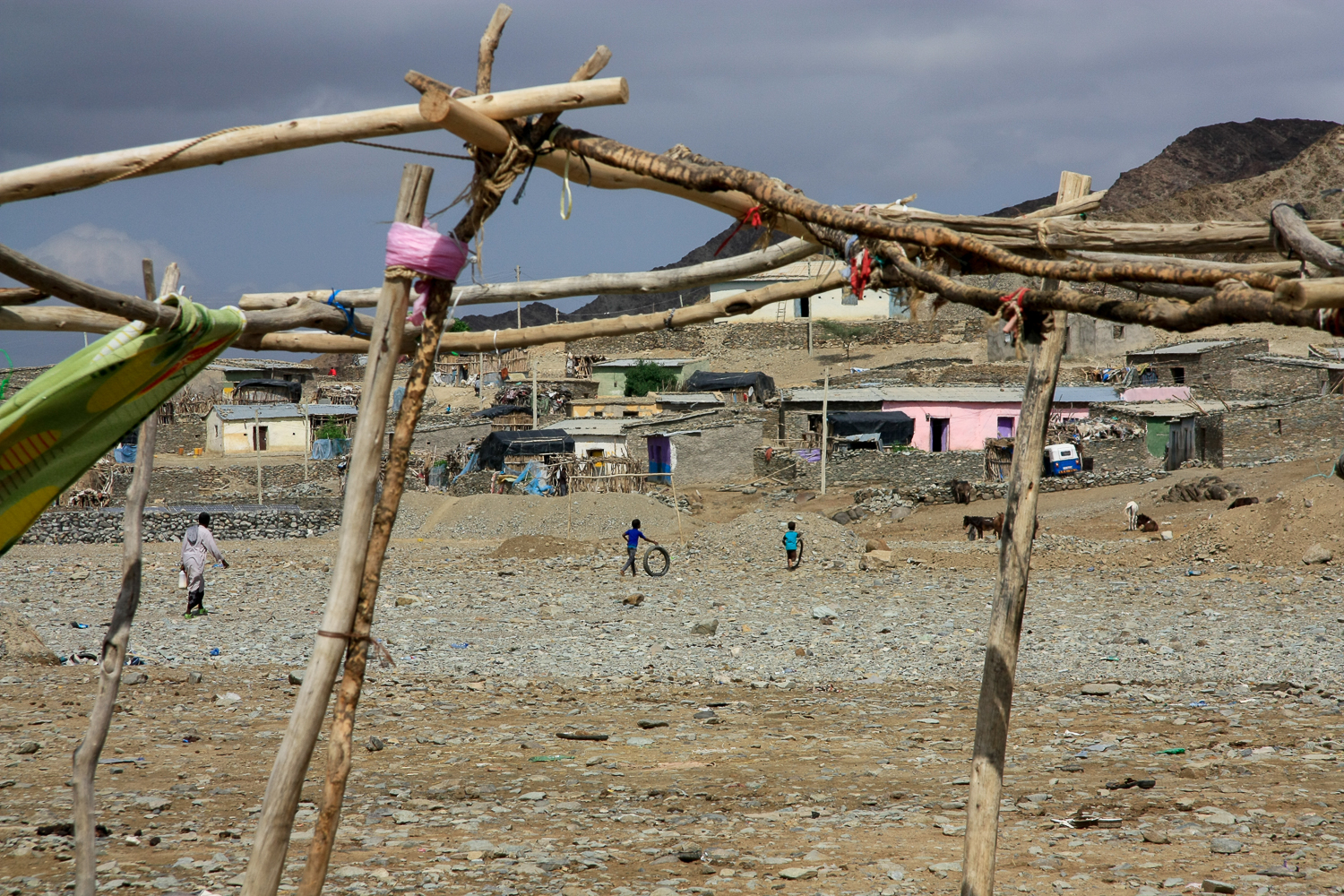 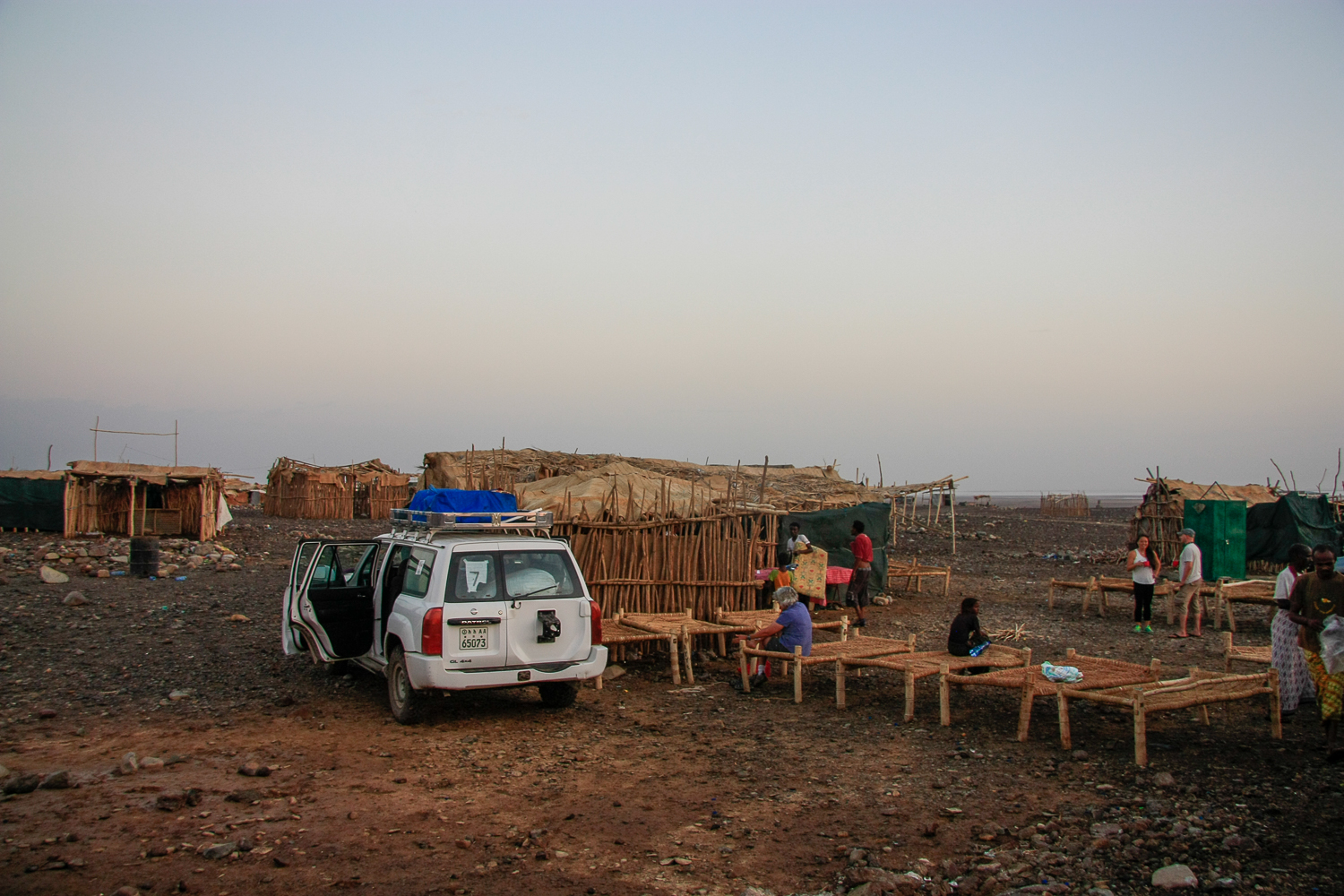 See? Not particularly hospitable. But here we are, and back to the climb.

Adrenaline replaced pain as we got closer to the caldera of Erta Ale, following the red-lit clouds above the volcano, like a pillar of fire. (Maybe that’s what the Bible meant during the Israelite exodus from Egypt, eh?) And when we finally reached the lip, behold, a hellhole in all of its hellishness, grumbling, boiling, and bubbling. Eye-searingly bright orange magma flowed endlessly from under the edges of the crater which we were standing on, cooling to a mass of black on the surface of the hole, cracked with more orange ready to burst from underneath. Large bubbles would burst once in awhile, causing a gurgling reaction after and splattering the surface of the crater with more orange, slowly cooling to black. We sat down, careful not to cut ourselves on the naturally forming glass around the lip of the volcano, occasionally sharp like shards yet often thin and stringy like a spiderweb, and watched for an hour before we headed back up to sleep. 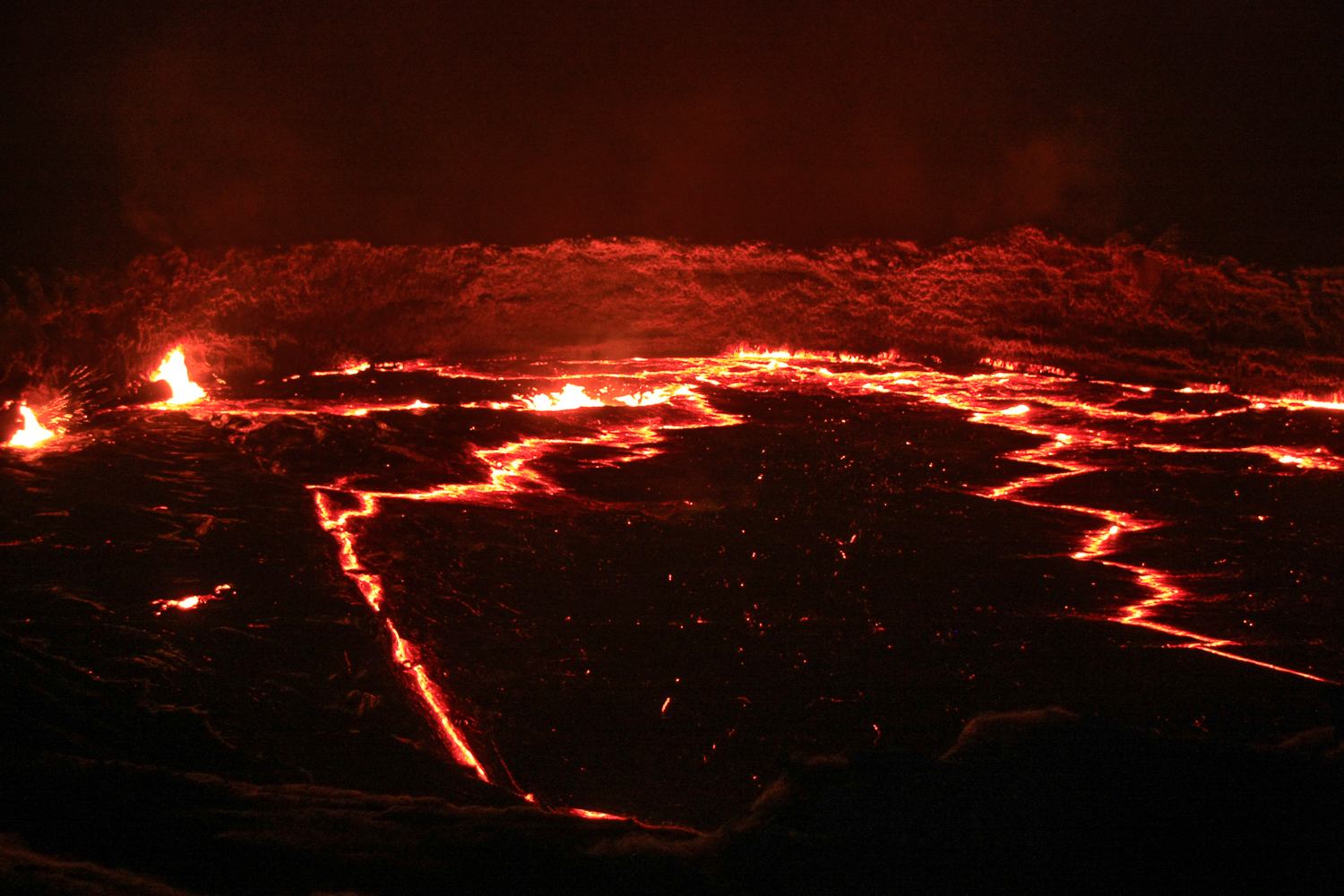 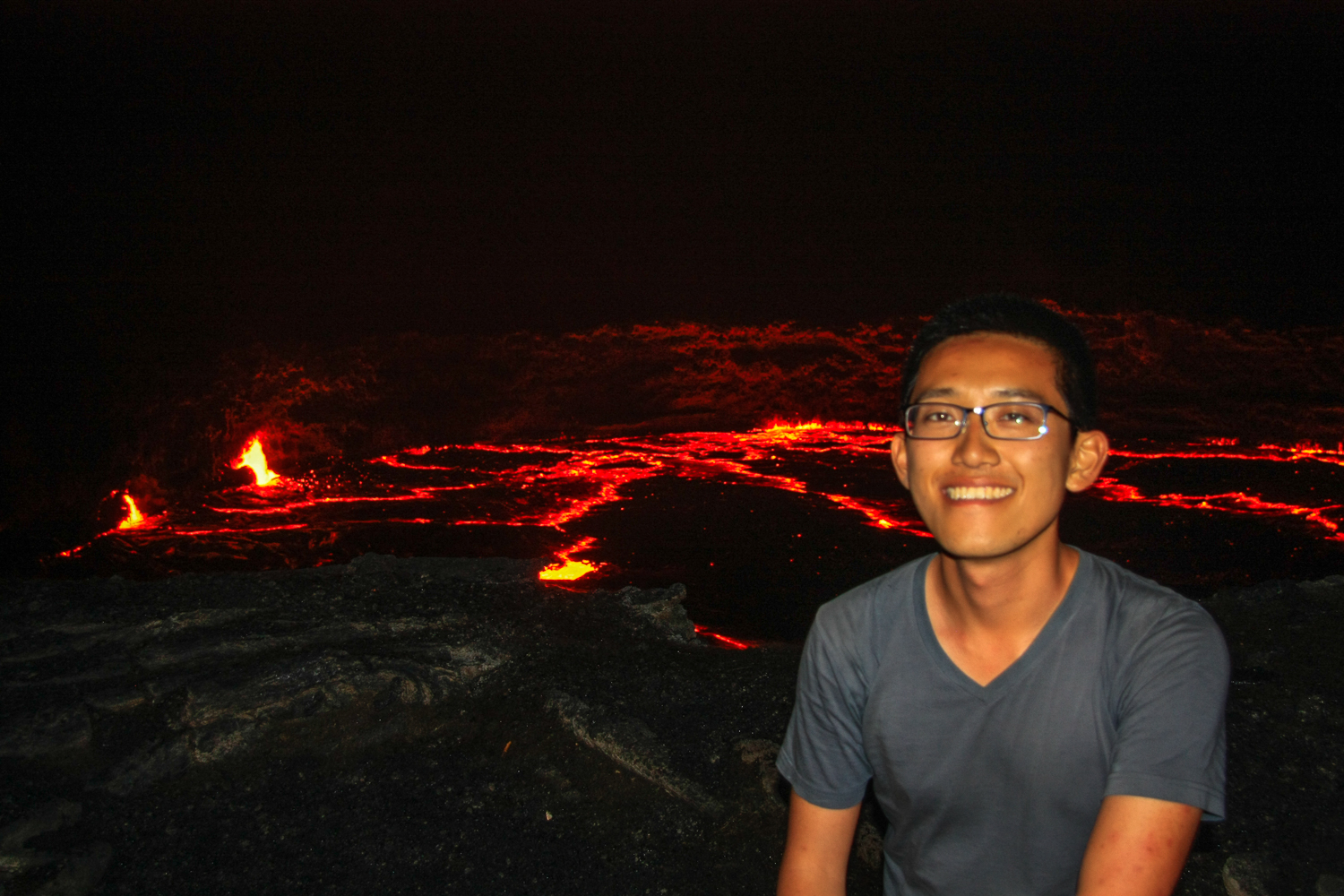 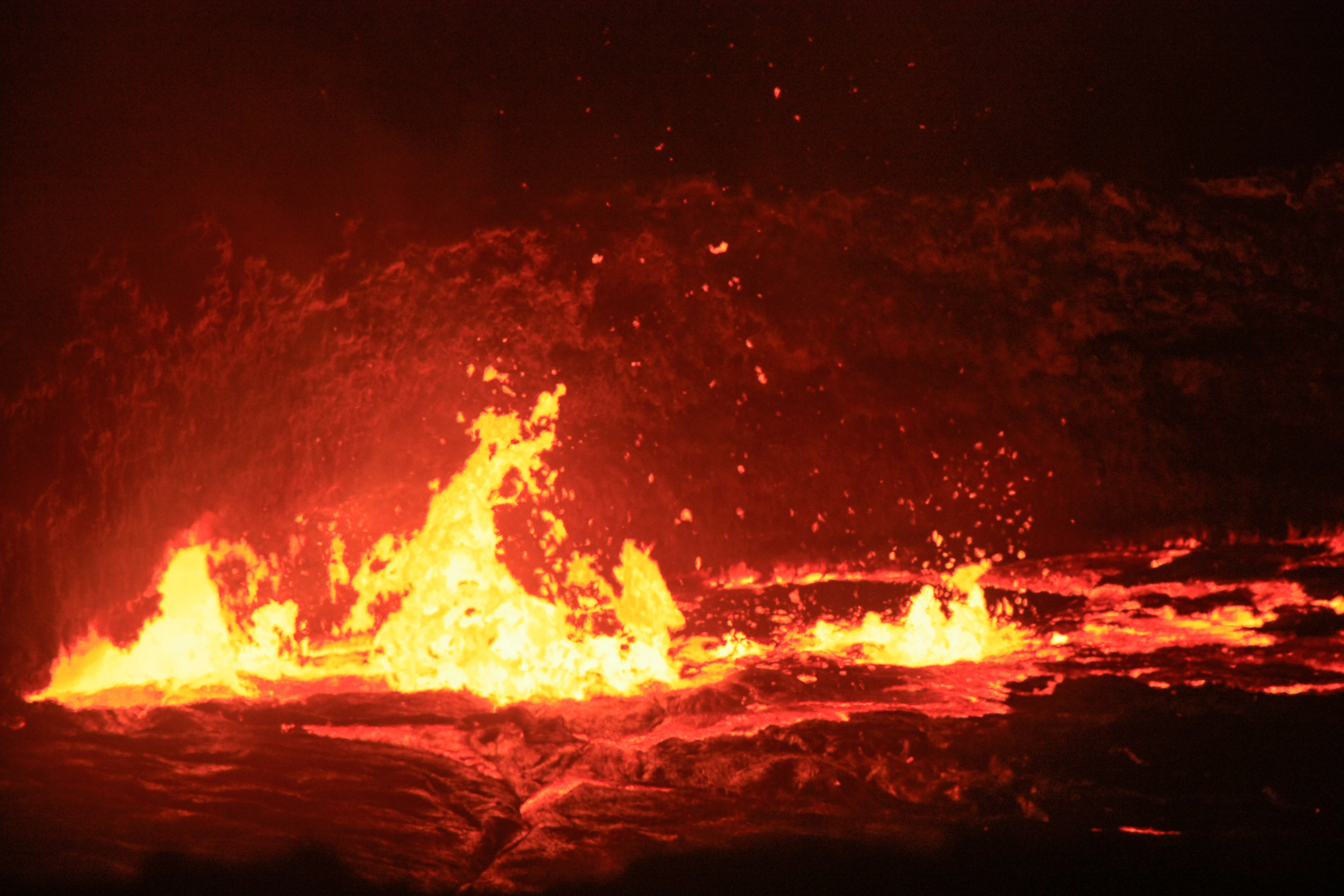 4 am! Time to wake up again to see the caldera with the sunrise. Oh wait, it’s raining. Aaaand now it’s pouring. We had a soggy three-hour, 9 km trek down and remained soaked for the next day. Well, on the bright side, we climbed Erta Ale in cool weather, and the locals must be ecstatic in this drought. (Our group members Mike and Cathy, Americans working long term in Ethiopia with pastoralists, knew as such, which at least made us feel less bad for ourselves while we attempted fruitlessly to dry later on.) Most other visitors climb it in the heat, which stays even during the night. On the other hand, we’re freezing (13°C in a place that’s usually 25°C even at night) and wet in a place with no shelter and we can’t dry ourselves off. Ah well, can’t win, but at least my stomach decided to feel slightly better after quitting the malaria meds.

After all the rain, we received a welcome repreive on our third afternoon and fourth day, with sun and “cool” temperatures. Visiting Lake Asale (-116m, well below sea level at its lowest point, the lowest in Africa) brought back a bit of Bolivia déjà vu, but felt unique in its own way: flat landscapes with no end, and endless caravans of camels and donkeys bringing back salt mined from the lake, on a long, hot, and arduous 8 day walk to Mekele. It’s a salt lake, often dry, but sometimes flooded — the source of all of this is ground water from the Red Sea that makes its way up to the surface. 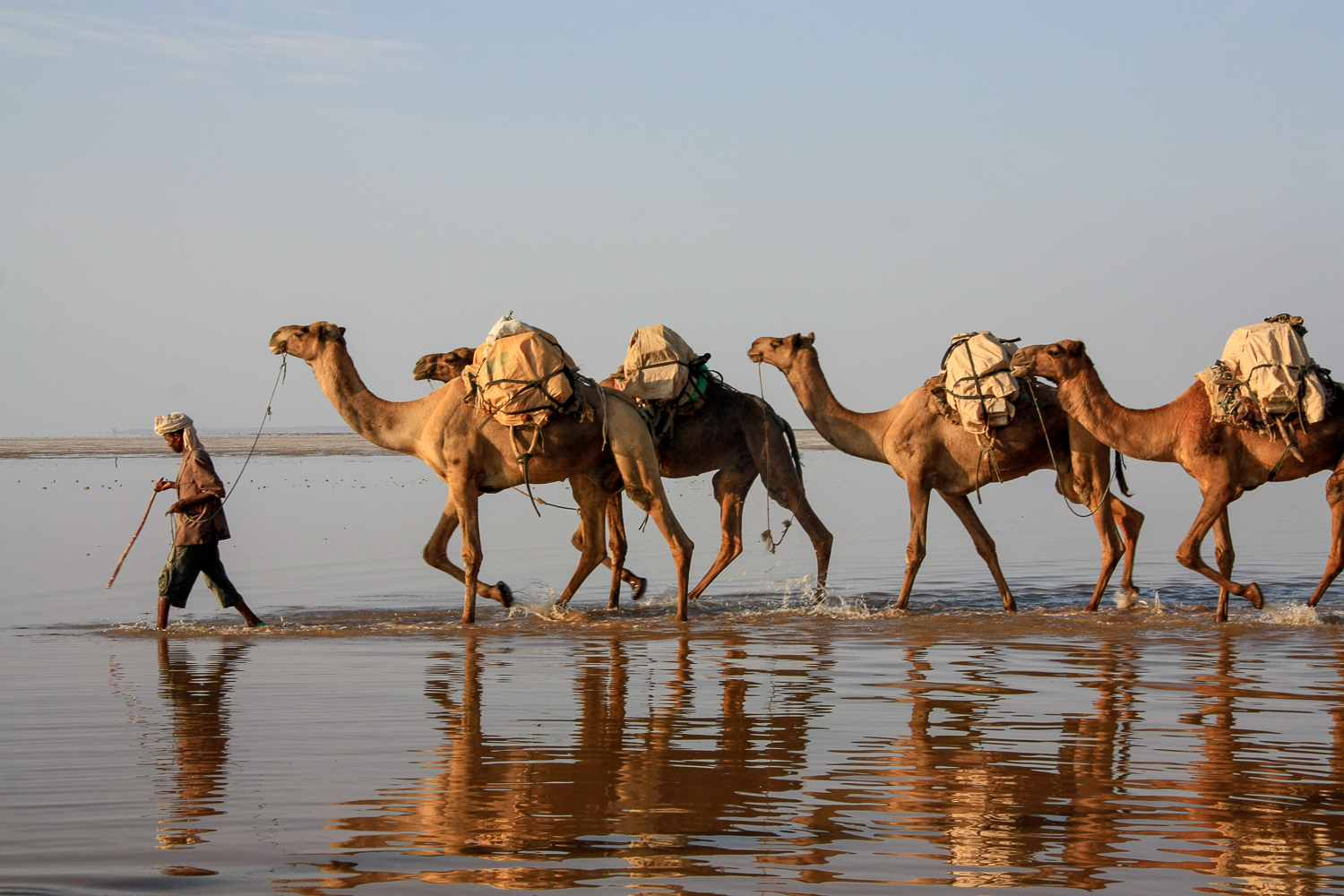 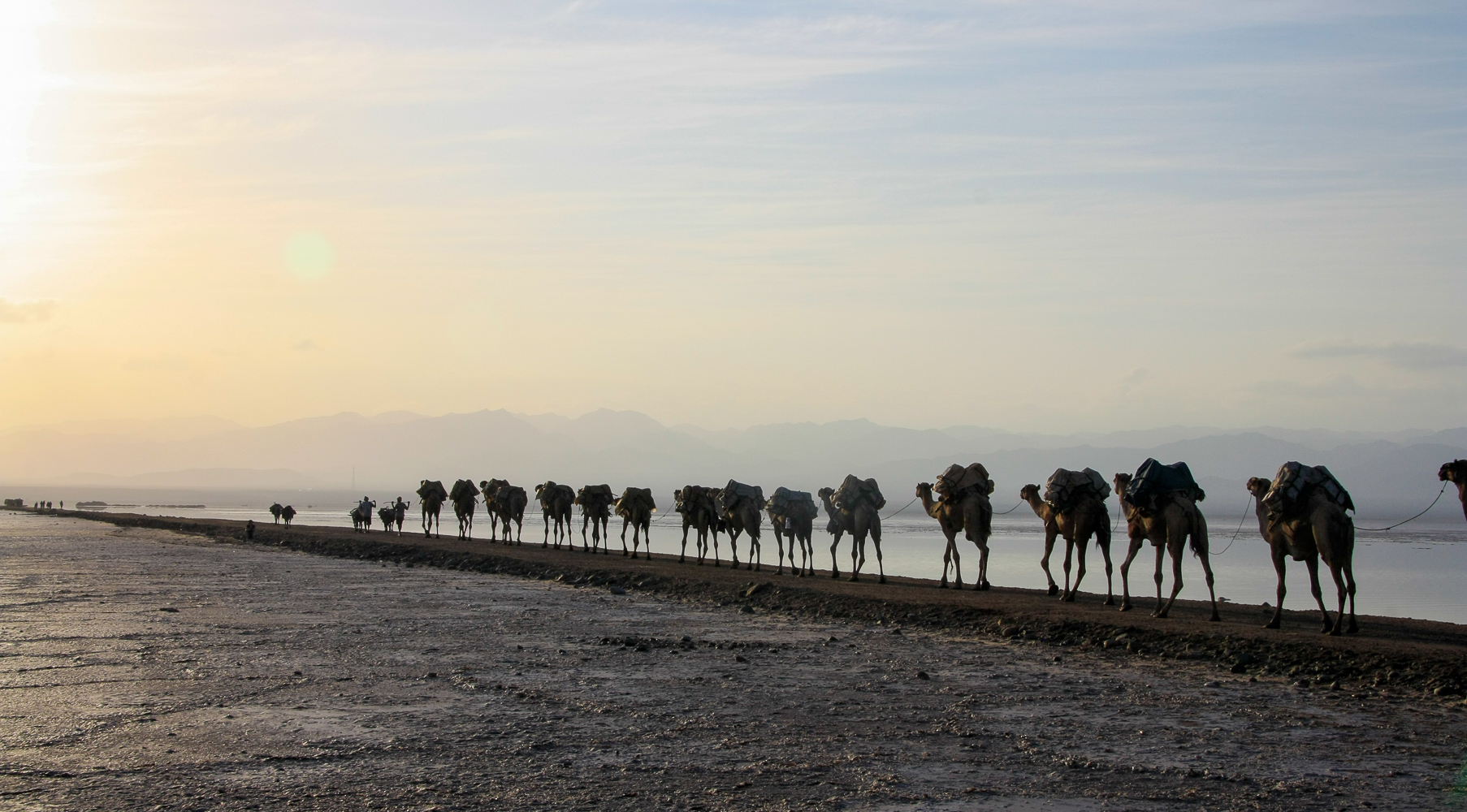 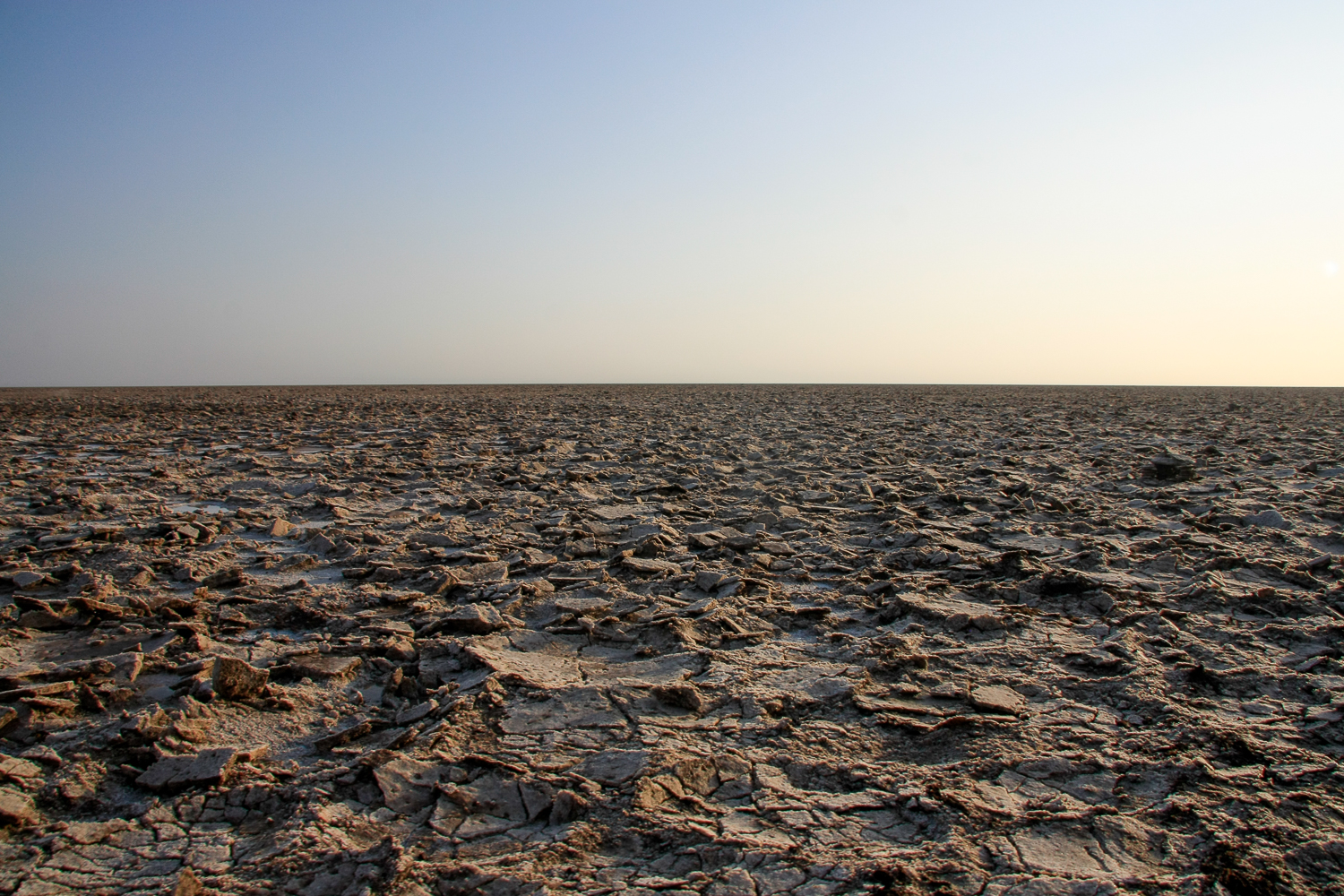 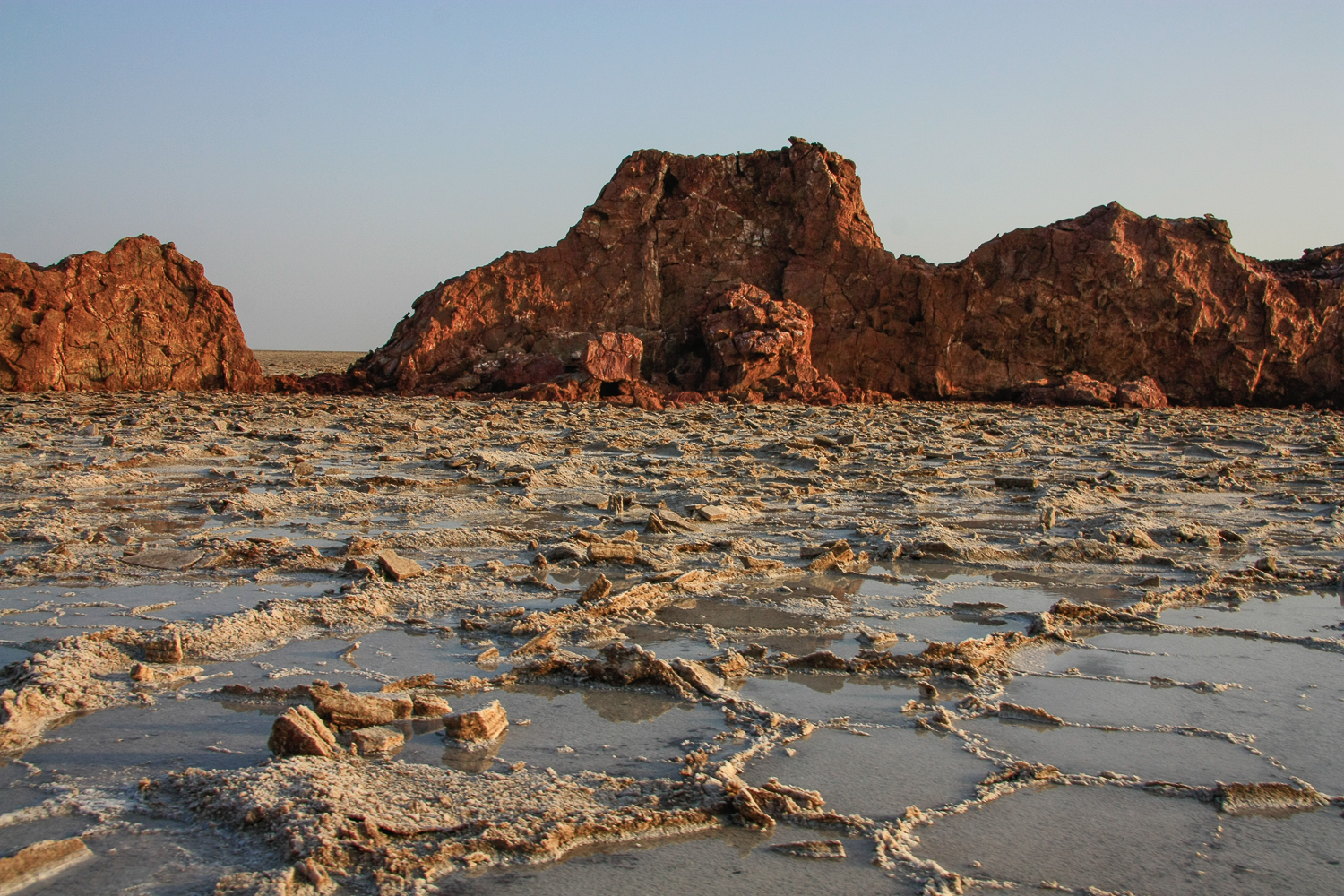 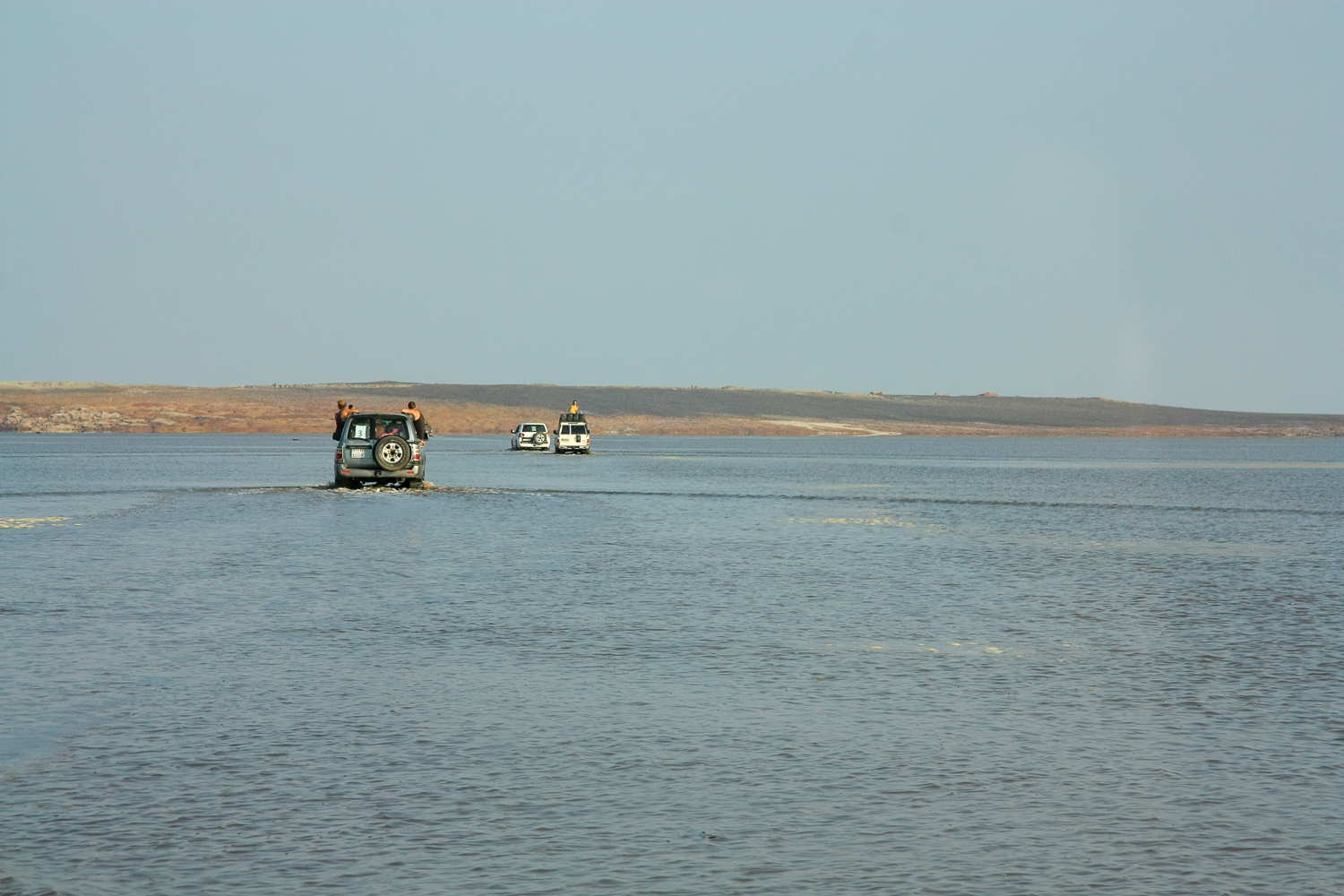 As romantic and old-world as this sounds, this is not an industry that may be able to continue past the generations and generations and hundreds of years it already has. Workers walk in the extreme heat 15 km (three hours) from the nearest village to the mining site in the lake, carve out approximately 500 bricks of salt in one shadeless and hot day with no hats or eye protection from the blindingly bright white salt, tie them onto their camels (each approximately worth $1000, able to carry 30 bricks that each weigh around 6.5 kg) or donkeys (cheaper, carry less), walk a week back to Mekele, and sell each brick for 50 birr ($2.50) before repeating the cycle again. You do the math. We watched them for awhile, digging away at the surface of the lake while hundreds and hundreds of camels waited, uncomfortable with the fact that we had air-conditioned vehicles shuttling us in and out, and they didn’t. (At least our group member EJ, a Korean woman who carried an umbrella constantly to shield from the sun but used it far more often on this trip for rain, did her part and provided a brief respite from the heat for a grateful worker!) Ethiopia has banned large vehicles to prevent mass excavation and compensated the Afar people, but there are still industrial companies, both foreign (Canadian too) and national, pressing forward with future plans. 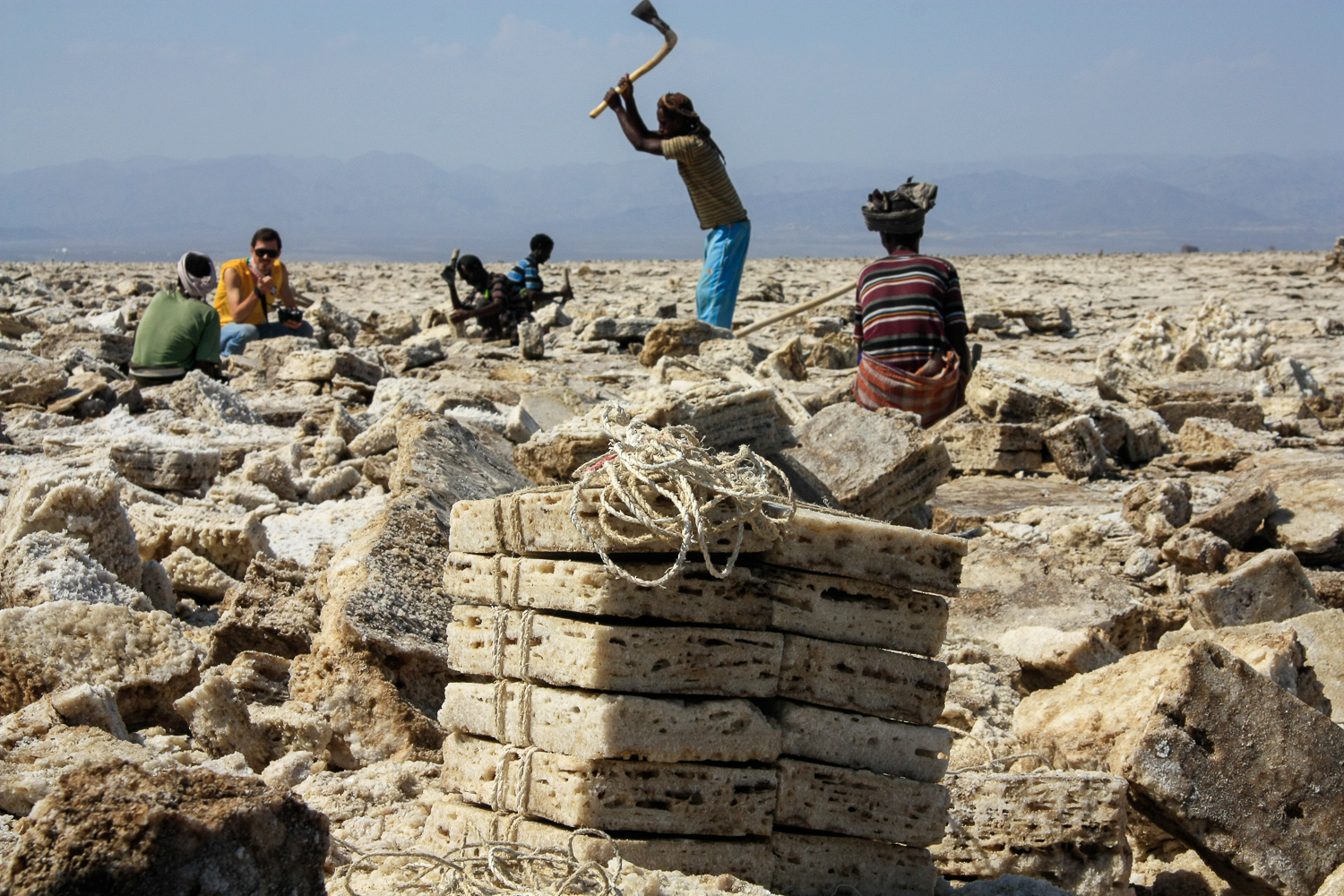 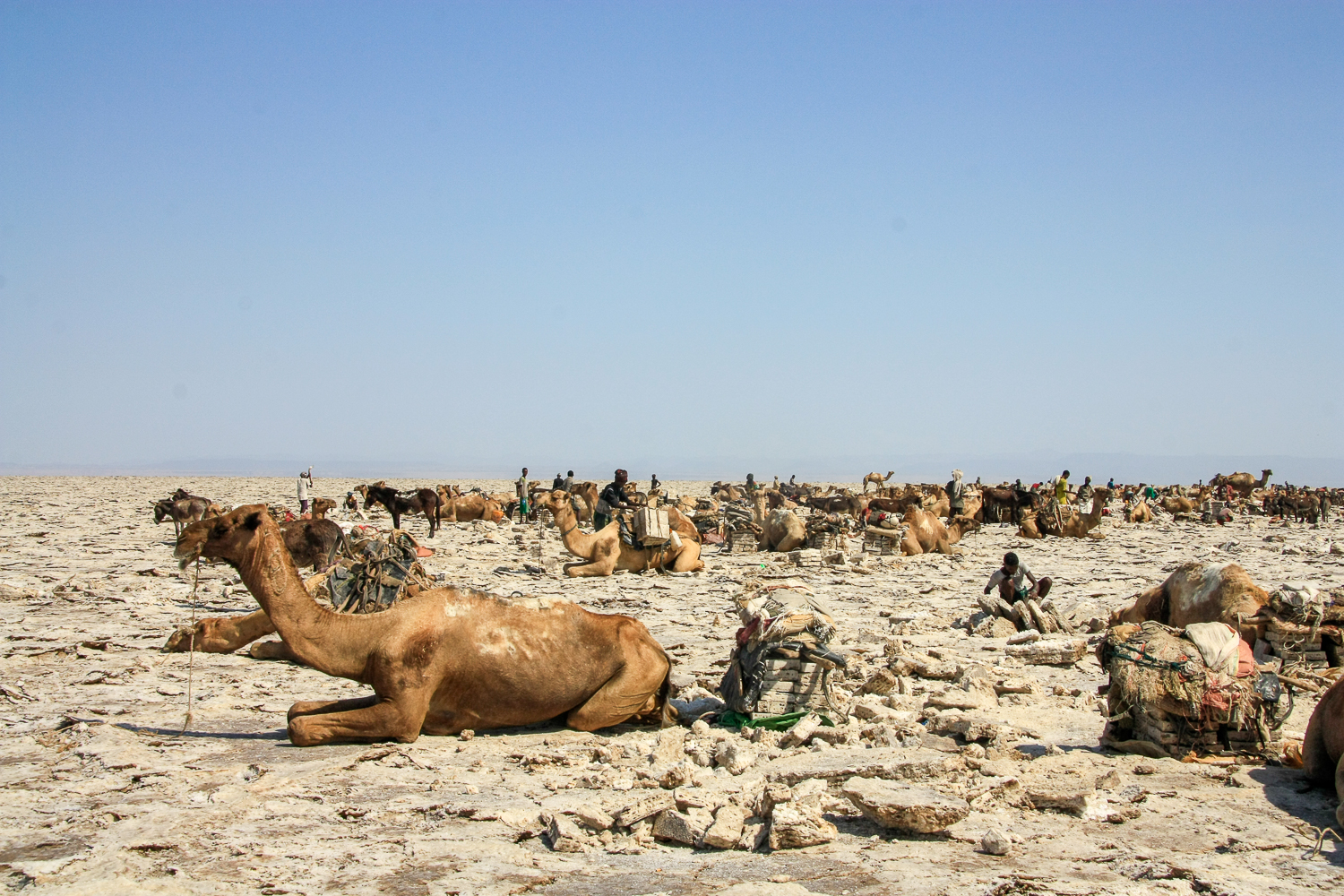 Nevertheless, I can’t say that it isn’t a beautiful sight.

Capping off our visit was Dallol, a small hill emerging from the flooded salt flats, and a former mining settlement comprising the hottest inhabited place in the world. Sulphur and potash deposits have created geysers of wild colours and shapes, a scorchingly hot and rotten-egg smelling surrealist landscape of whites, reds, oranges, yellows, greens, and browns changing dramatically over each hillcrest. Clearly we were hungry (especially me, having not been able to each much in the last week), as we compared various sections to mashed potatoes with butter and cheese and slightly broiled in the oven, a giant turmeric curry, scallops, cocktail shrimp, and more. 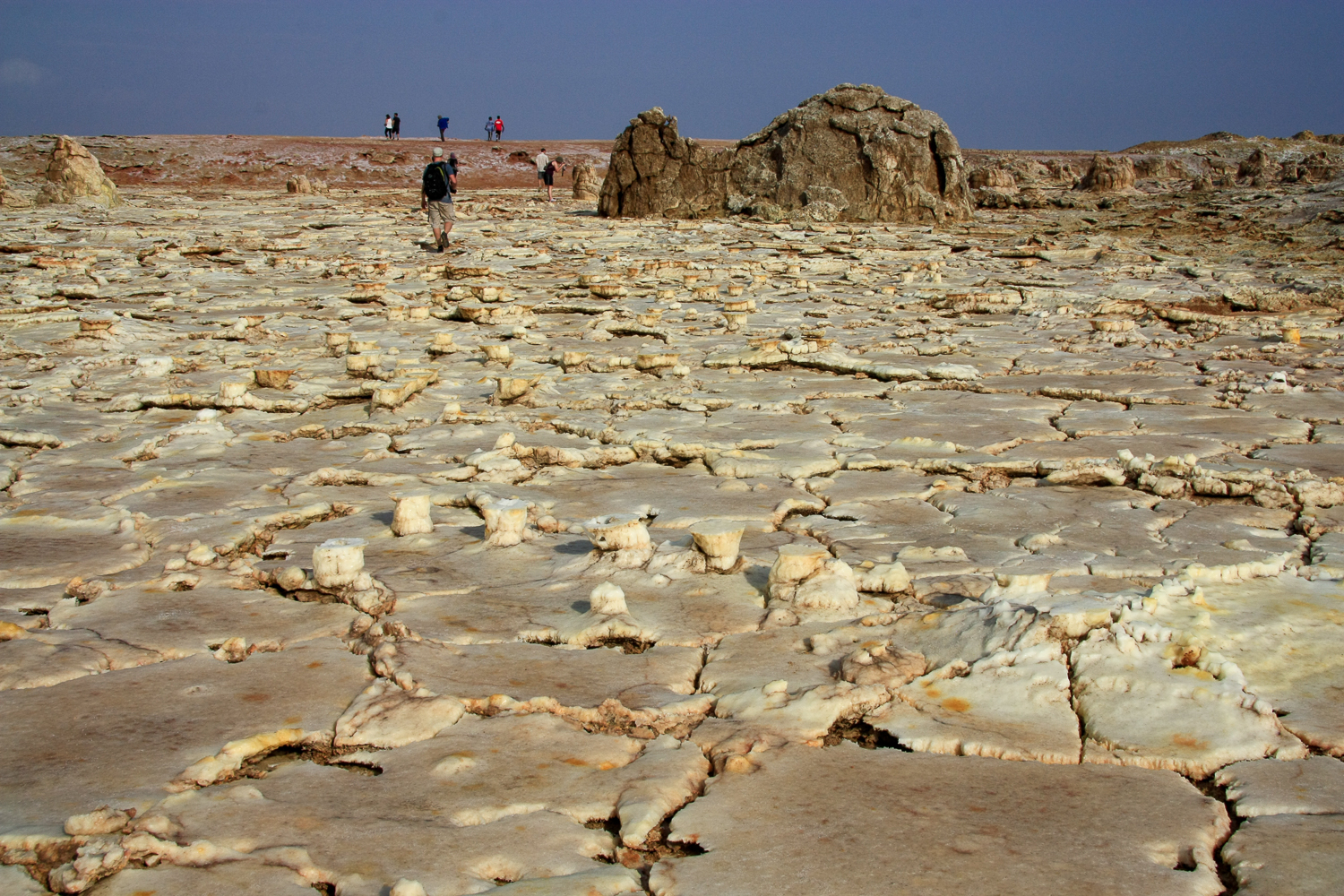 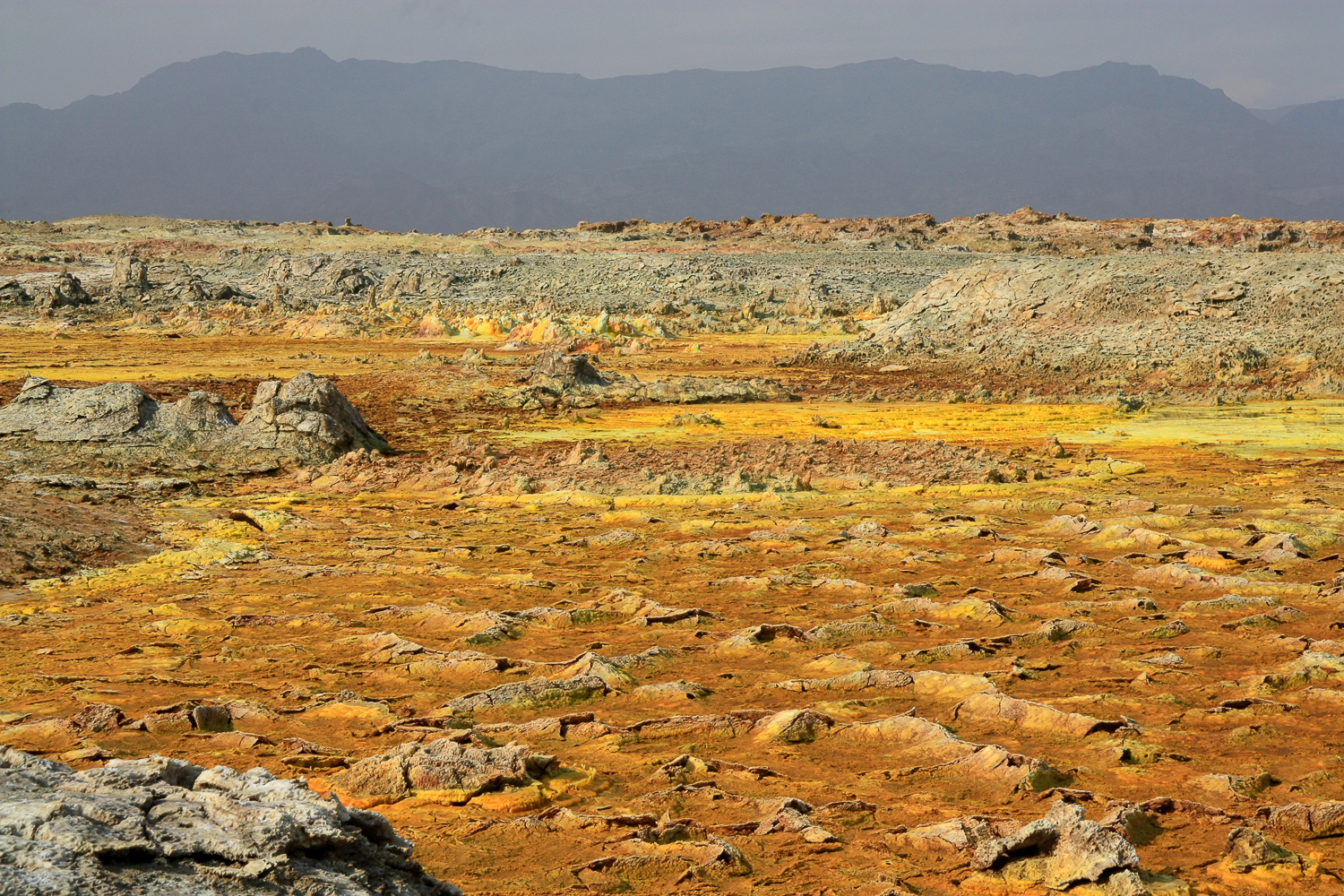 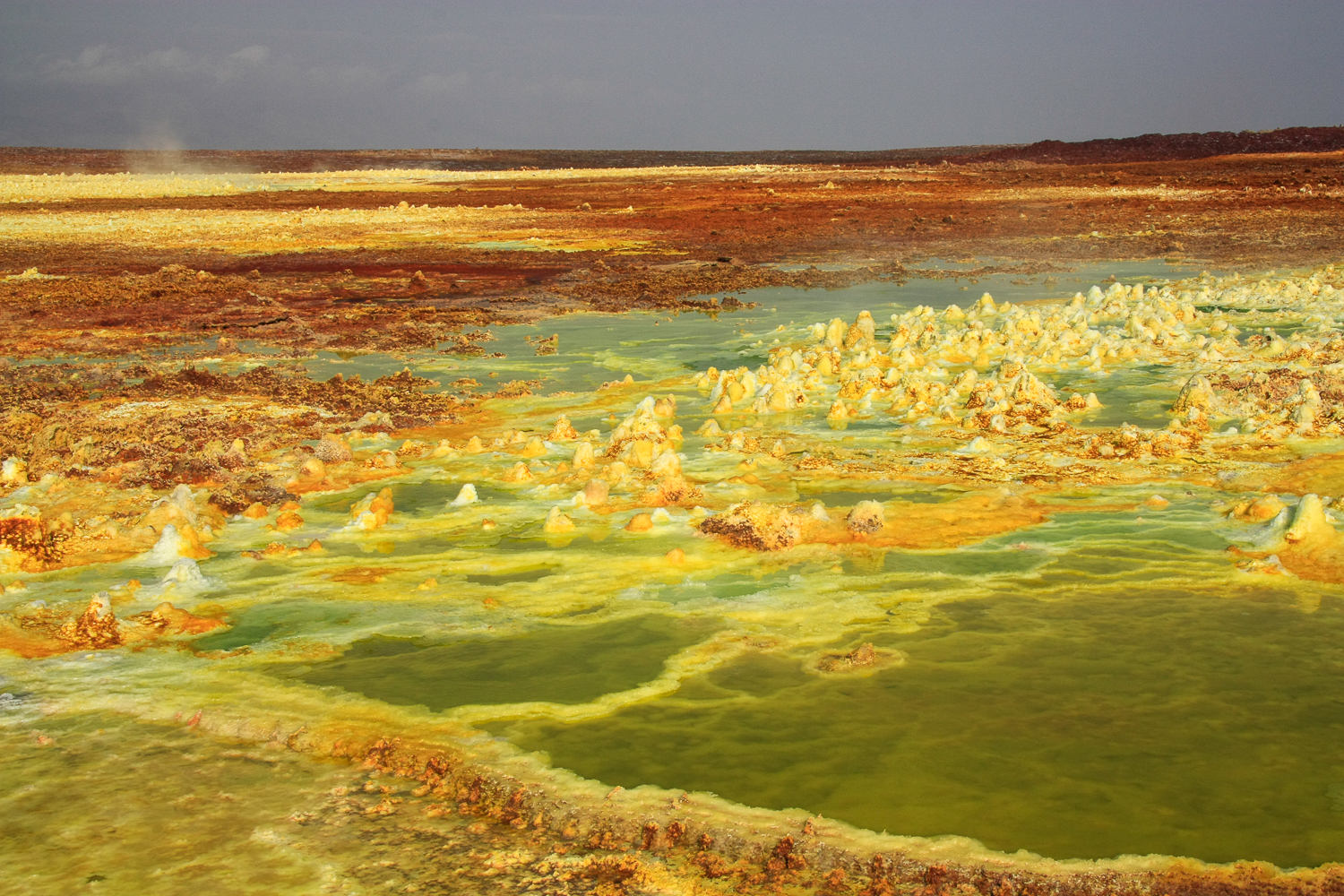 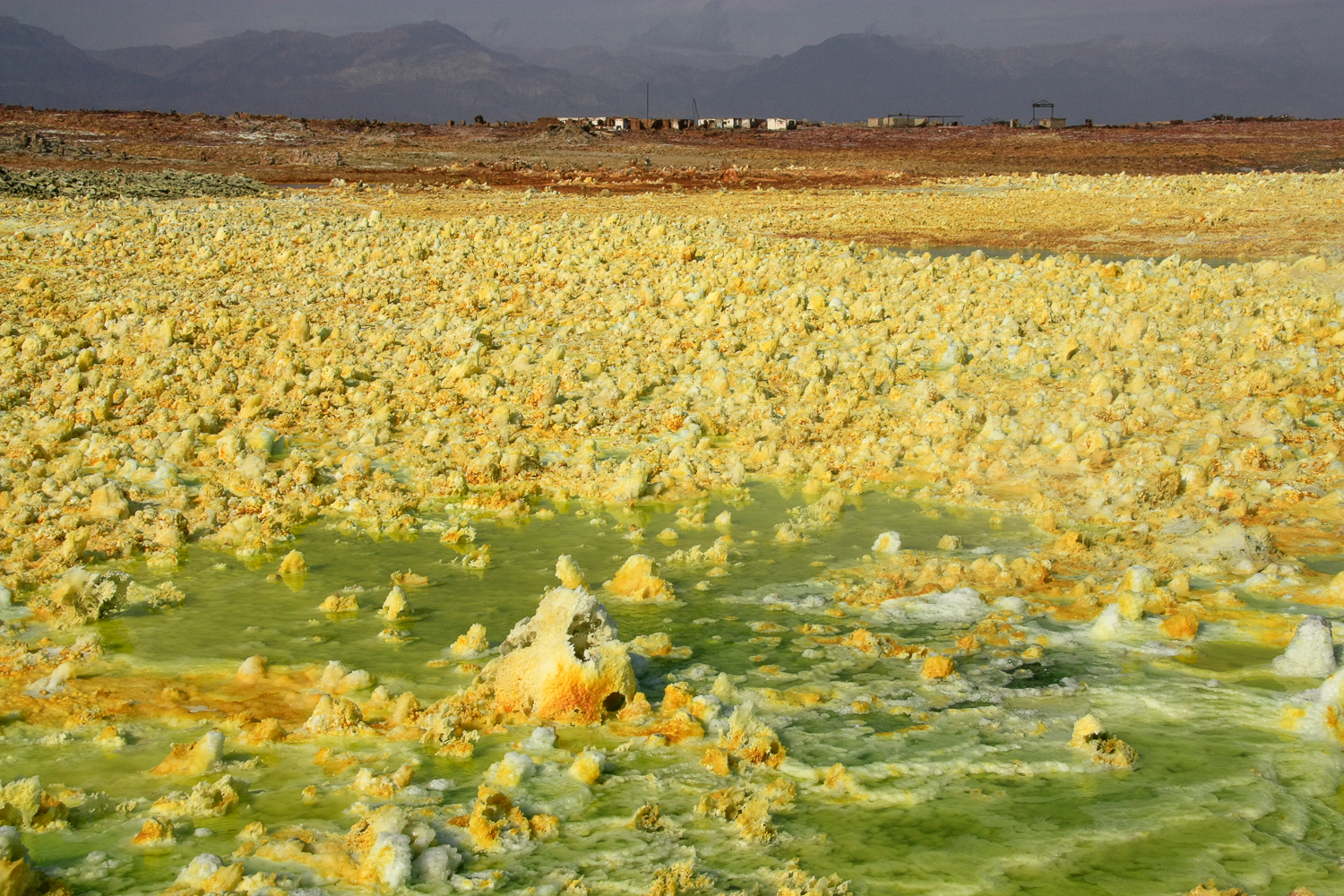 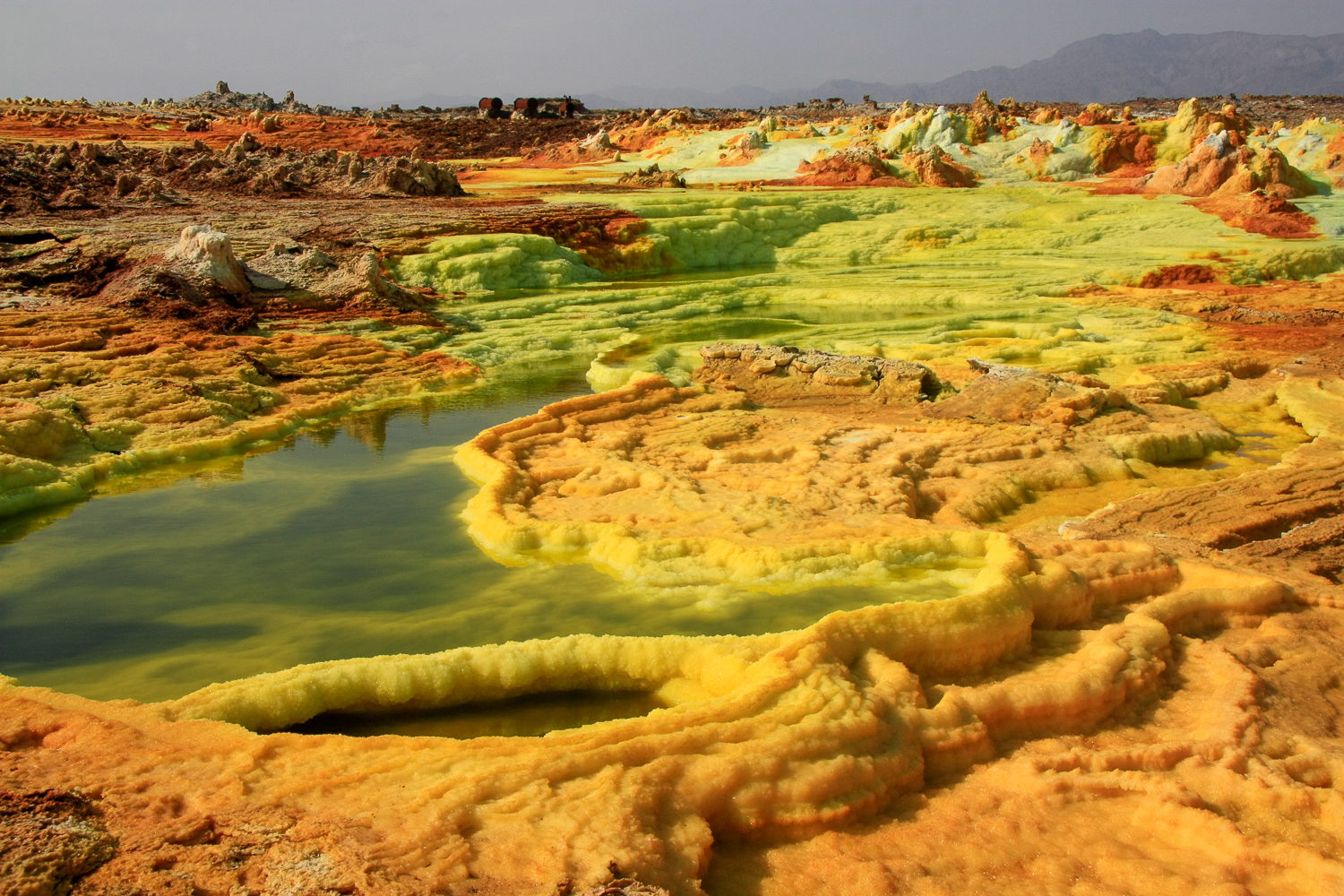 I slept well on the long ride back to Mekele, stomach and esophagus now recovered after four days, dreaming of some very specific meals.