After a day of three long and bumpy bus journeys and its requisite touts and hassles, Rosie, Yuka, and I (all continuing together from the Danakil tour) forced ourselves awake at 5:30 am on a Sunday morning — though the non-stop chanting over the loudspeakers all over town started at 2 am. We joined the masses of white-clad worshippers to the churches of Lalibela. Looks like the whole town’s awake.

Lalibela’s known for its 11 rock-cut churches — to be clear, these are churches that look like they’re standing buildings, but were not built up like buildings, but carved *down* from the massive bedrock and made to look like buildings. (And I thought Petra was impressive enough — those are just façades!) Nothing prepares you for such a sight: peer down a massive quarry and you see a giant building in the hole, surrounded by maze-like passageways and tunnels. Archaelogicially, geologically, and architecturally fascinating as it may be, what fascinated me most was its continued use as a place of worship. Here were are, in 2015 (well, Ethiopian 2008), and these churches carved in the 1100s are still very much lived-in, crowded by villagers using it as their regular place of worship, and further crowded by pilgrims from the rest of the country. 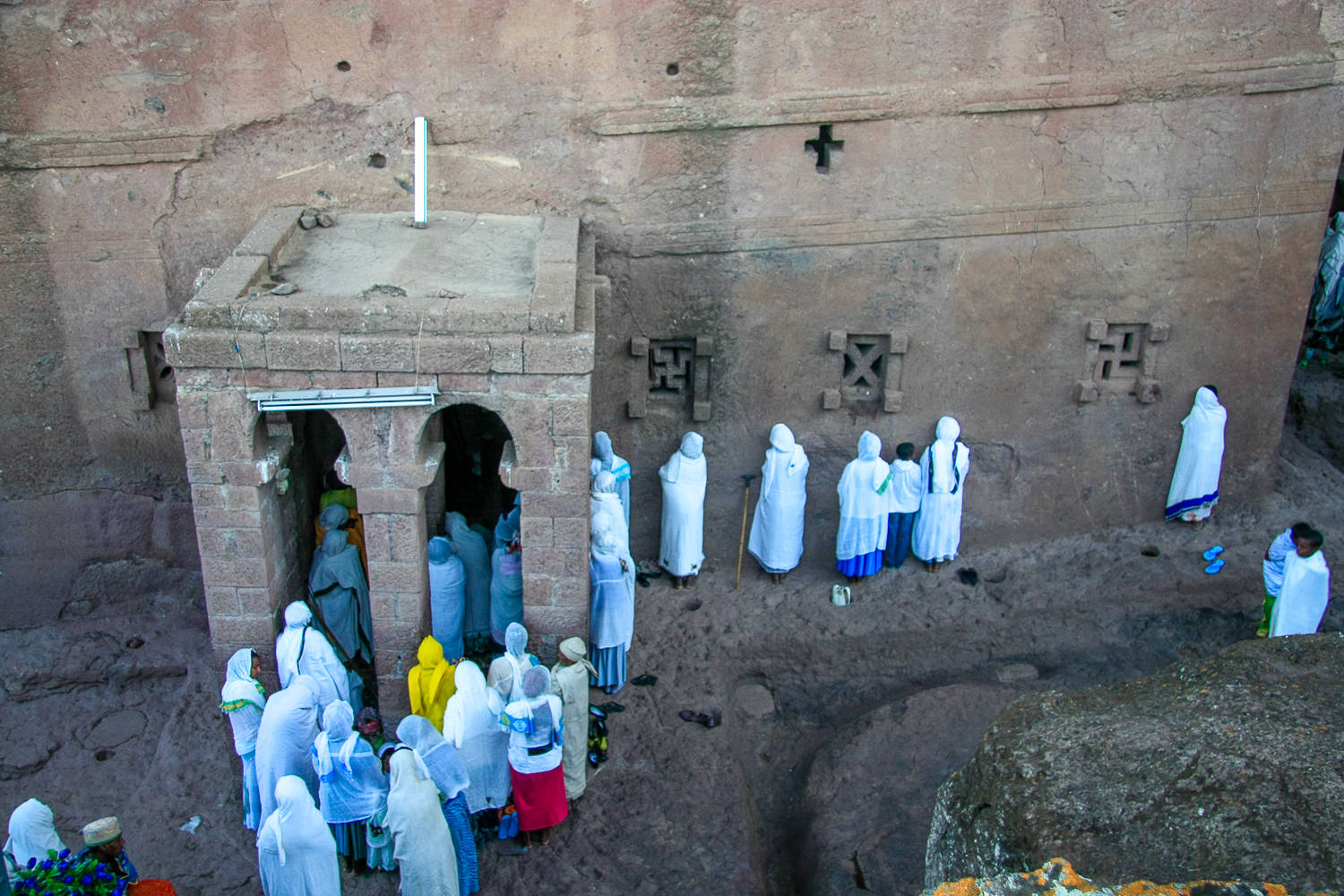 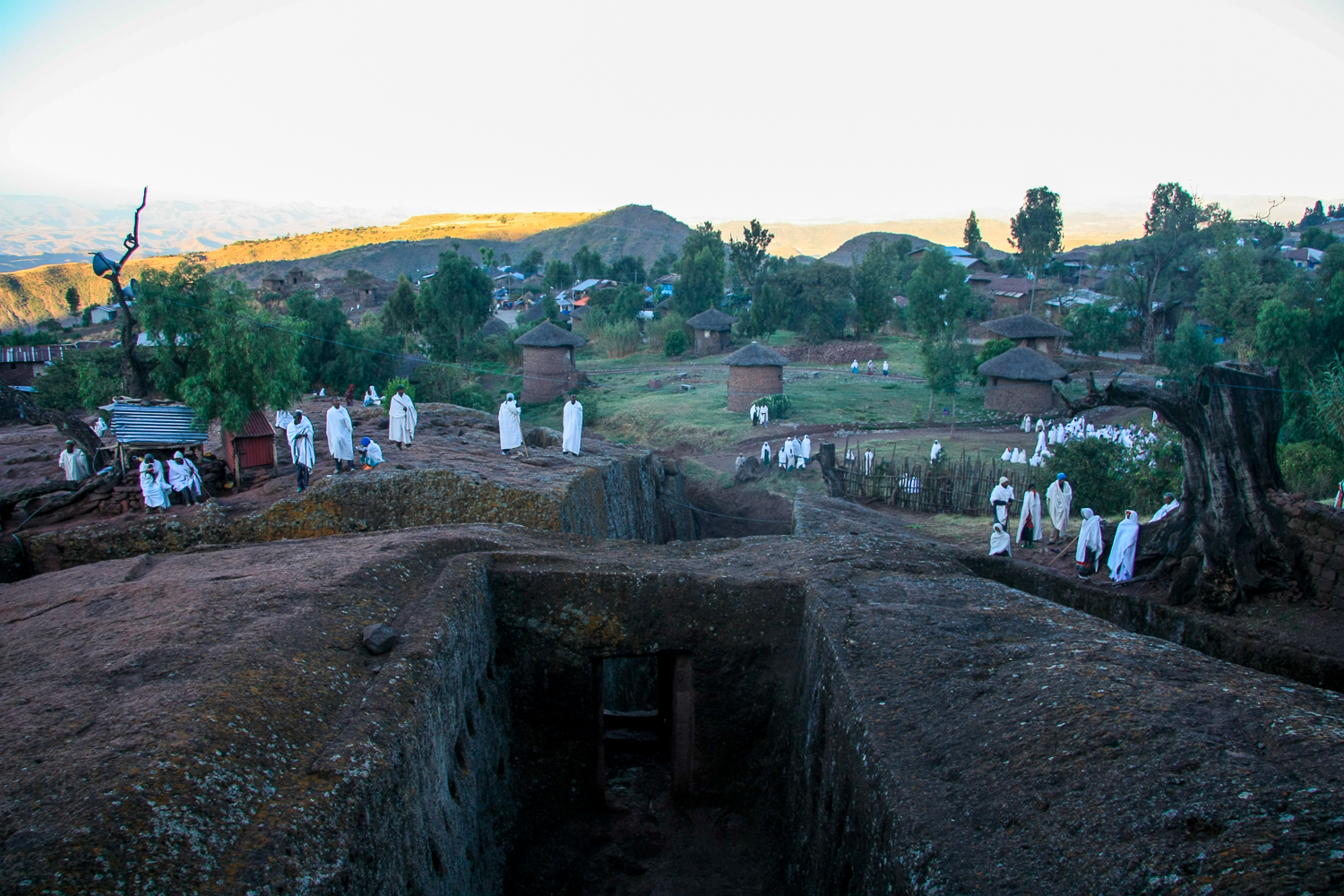 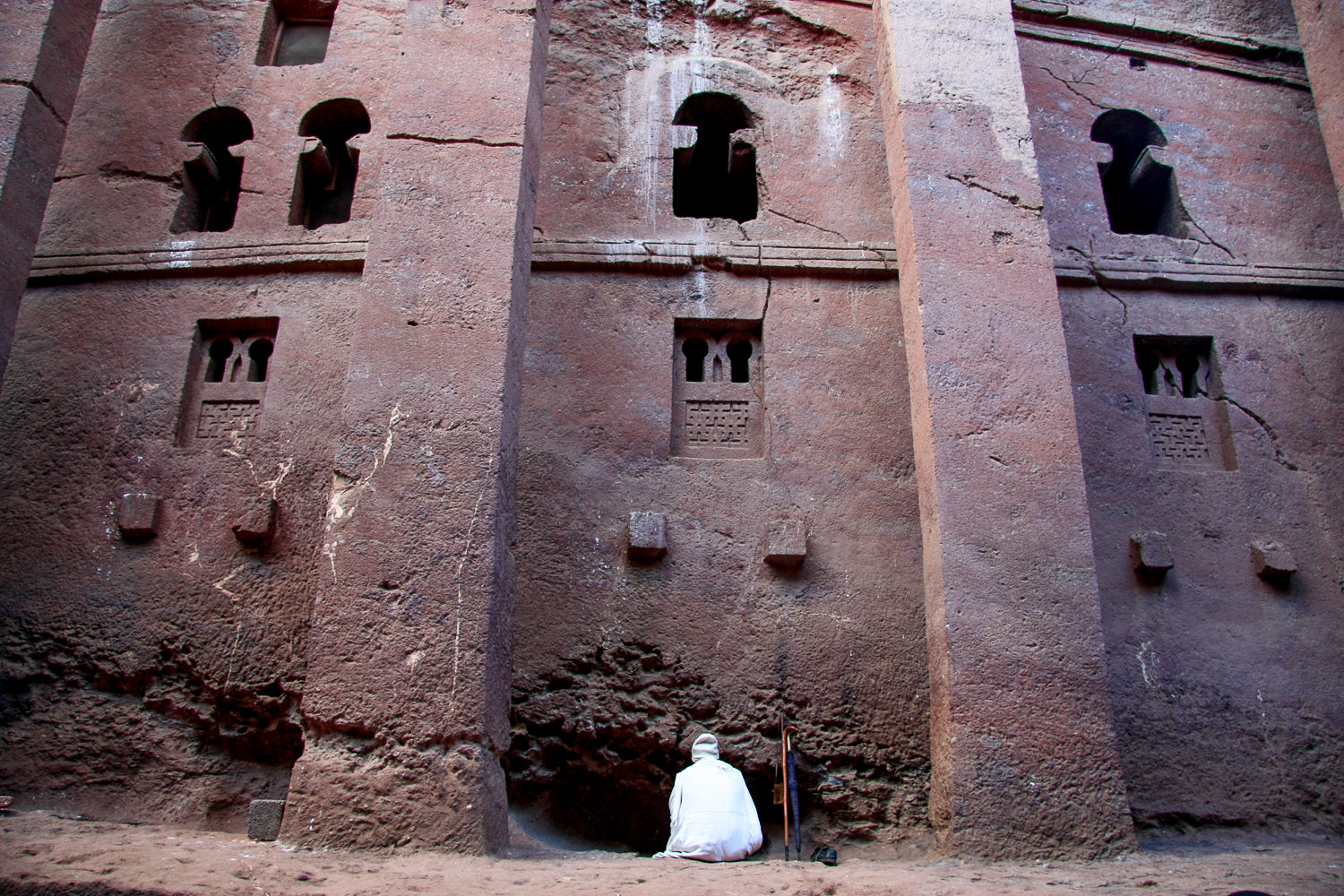 The churches were packed to the brim at 6 am, and plenty more people leaned against a pillar or a wall, or just sat above the quarries holding the churches, as chanting on the loudspeakers alternated from monotonous to melodious. On occasions, a crowd of worshippers would break into what sounded like a mournful yet hopeful song, altogether simultaneously. Every person who passed by would cross themselves, kneel, repeat a few times, prostrate themselves, then kiss a wall or stair or the floor. Many carried their small holy books or bead chains, reading or reciting quietly to themselves. After about an hour and a half, a priest carrying a cross came to an outside podium on the hill above the churches, addressing the waiting masses. He translated from a large copy of their holy book, written in Ge’ez, to modern-day Amharic. Guess we just witnessed a Sunday church service. 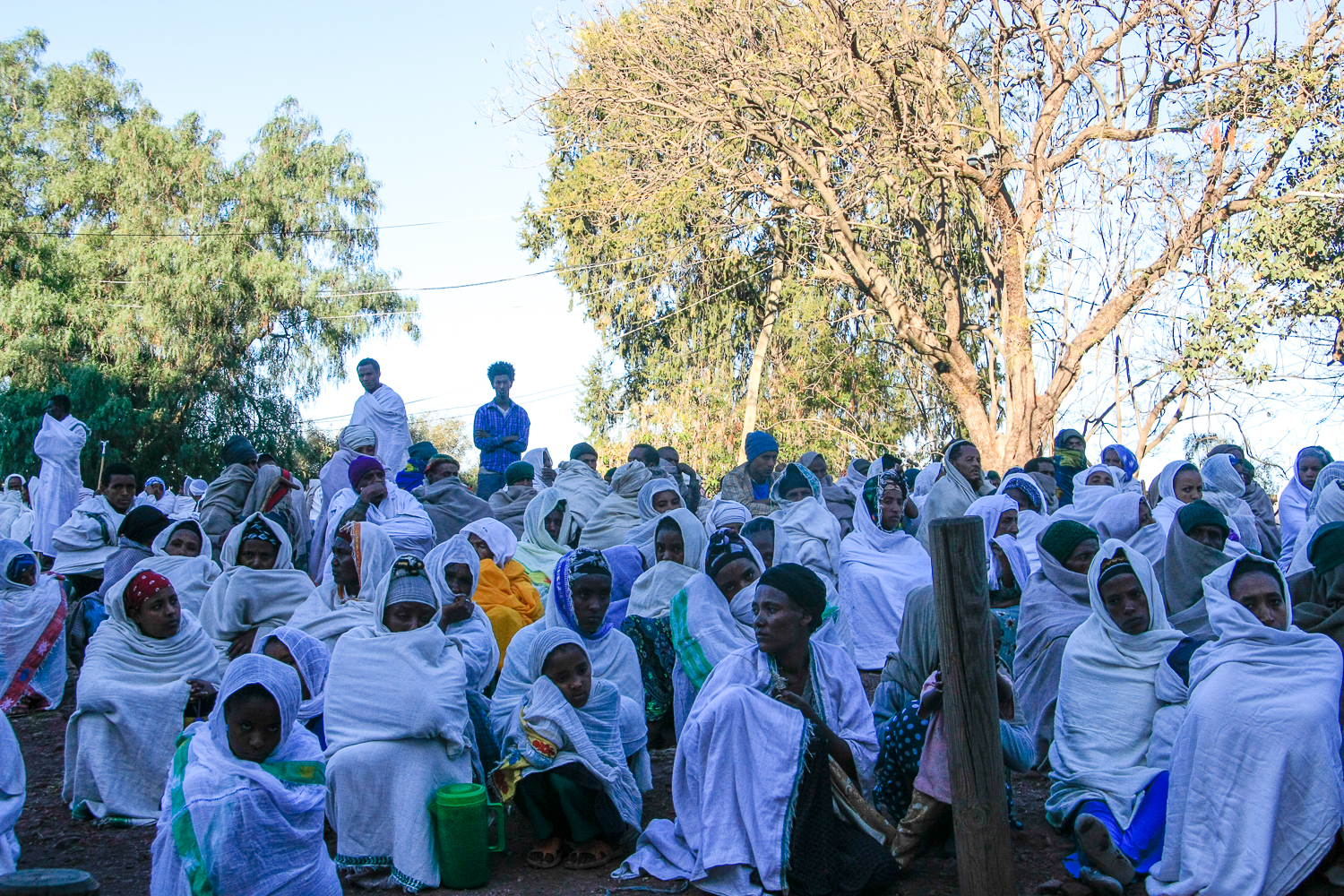 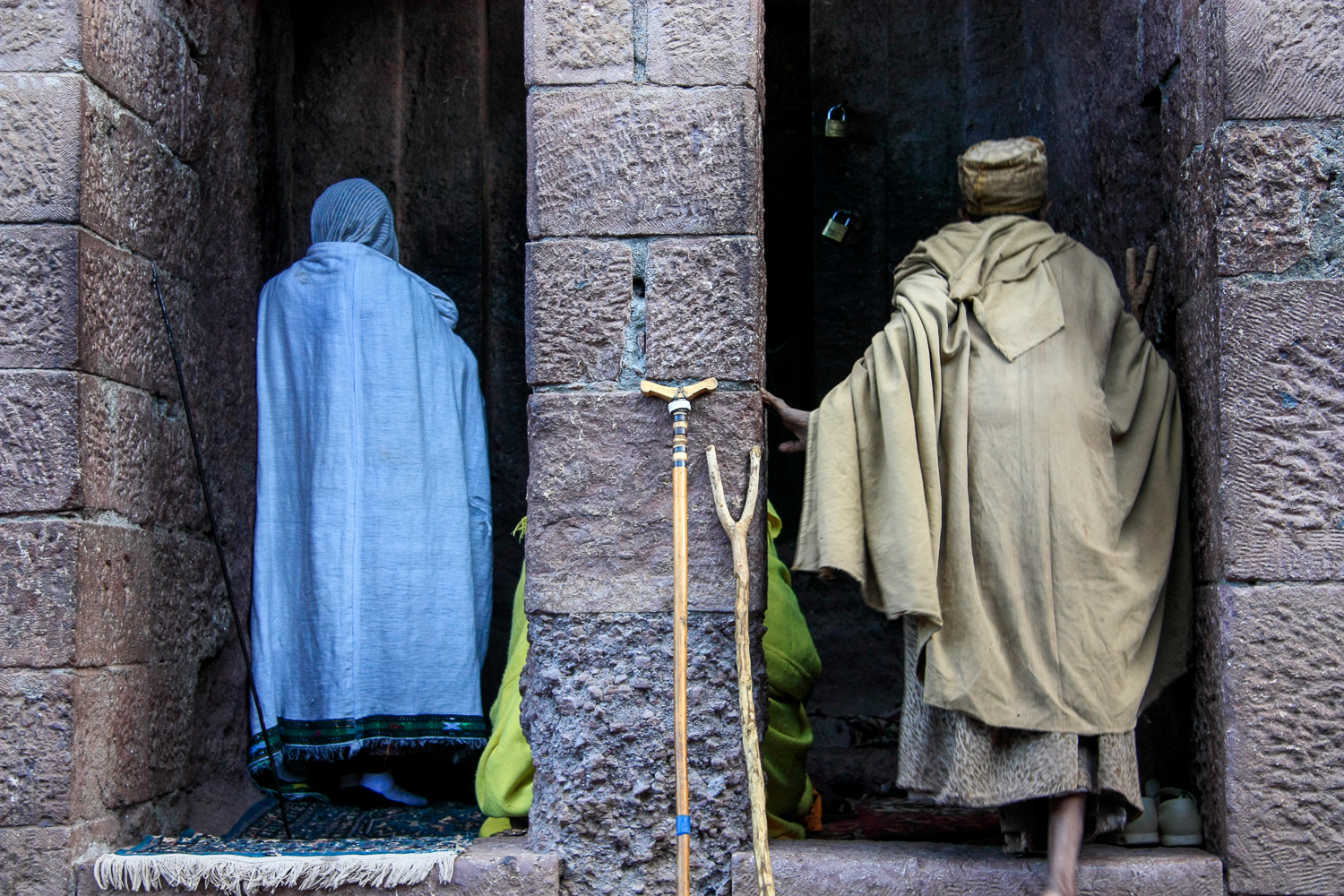 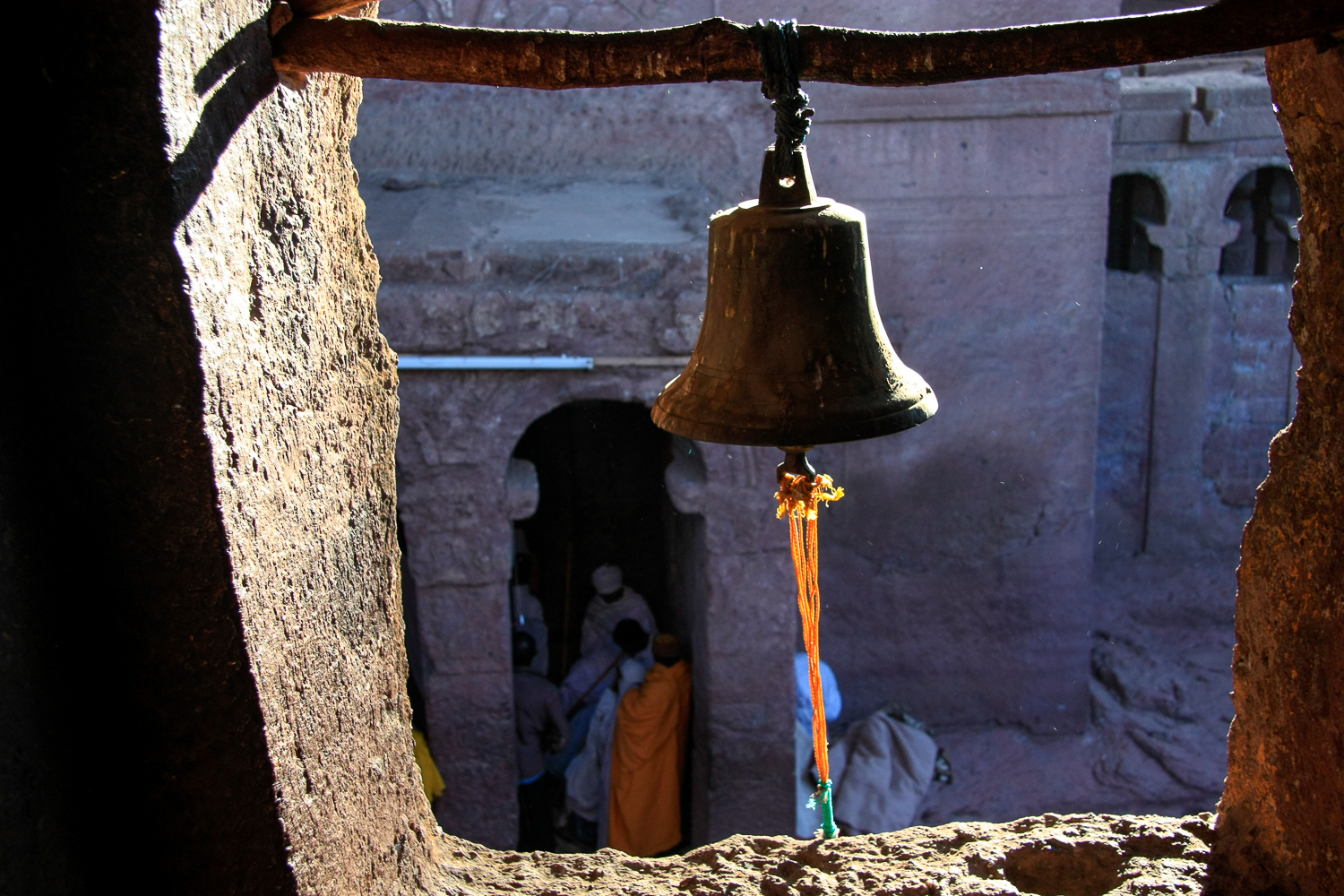 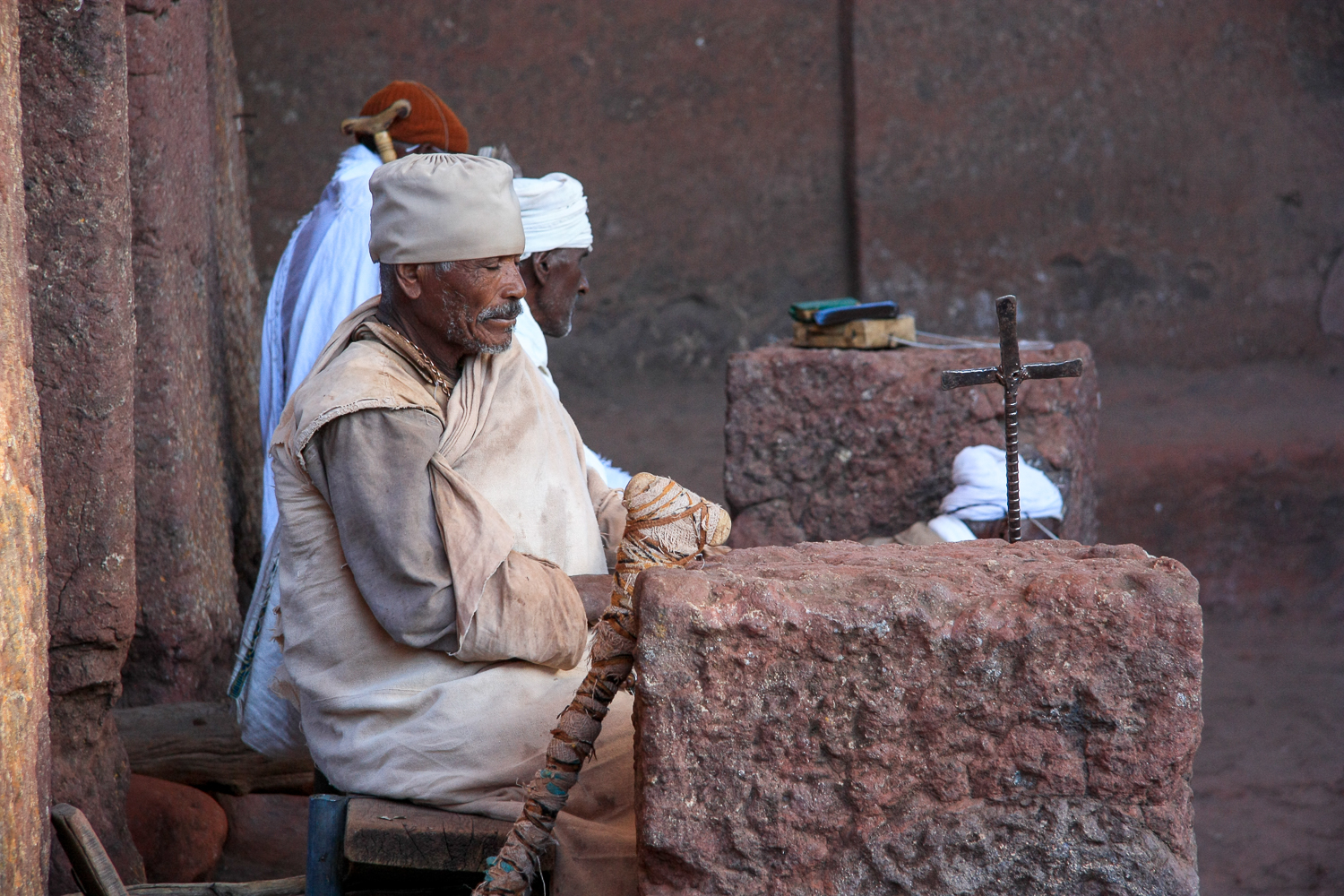 So we saw all that before we could even get to the ticket office and get a guide!

Our guide Belay took us through the nooks and crannies between churches, giving us a bit more explanation. There are three types of churches — monolithic (free-standing), semi-monolithic (partially carved into a rock wall), and cave. The churches, supposedly built over a 23 year span under the watch of King Lalibela (though contemporary historians will beg to differ, with such varying architectural styles that it suggests something more like a century over several kings), are laden with symbolism and numerology: three steps here for the Holy Trinity, seven there for the “seventh heaven”, nine windows to represent Ethiopia’s Nine Saints, 12 more to represent Jesus’s 12 apostles. Crosses carved in threes, with a hell symbol on the left and a heaven symbol on the right (to represent the criminals, one unrepentant and one repentant, hung next to Jesus during his crucifixion). Even the entrances of a church draw a cross shape: the right side entrance for women, center for all, and left side for clergy, leaving the remaining center-back of the church longer. The interiors of many of the churches are supported by pillars, have false windows and windowpanes, and various aesthetic details — again, carved from the bedrock rather than built up. Outside, there are both pools for holy water (“dip a barren woman in there and she’ll become pregnant, guaranteed!”) and clever avenues for drainage during the rainy season. These churches have stood the test of the time (granted, some more than others — UNESCO has begun constructing tent-like structures to shield some of the churches from further elemental damage). Simply jaw-dropping. 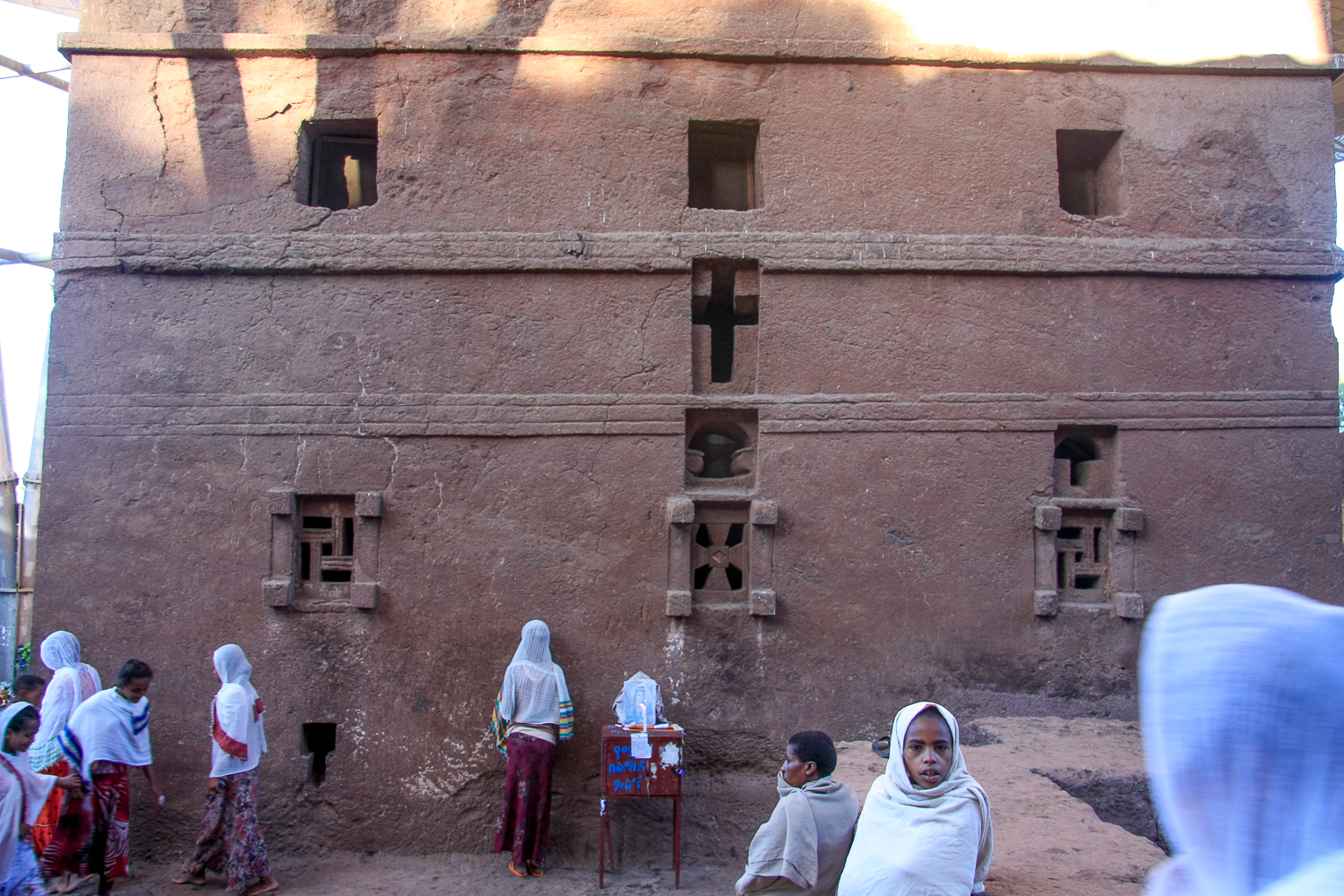 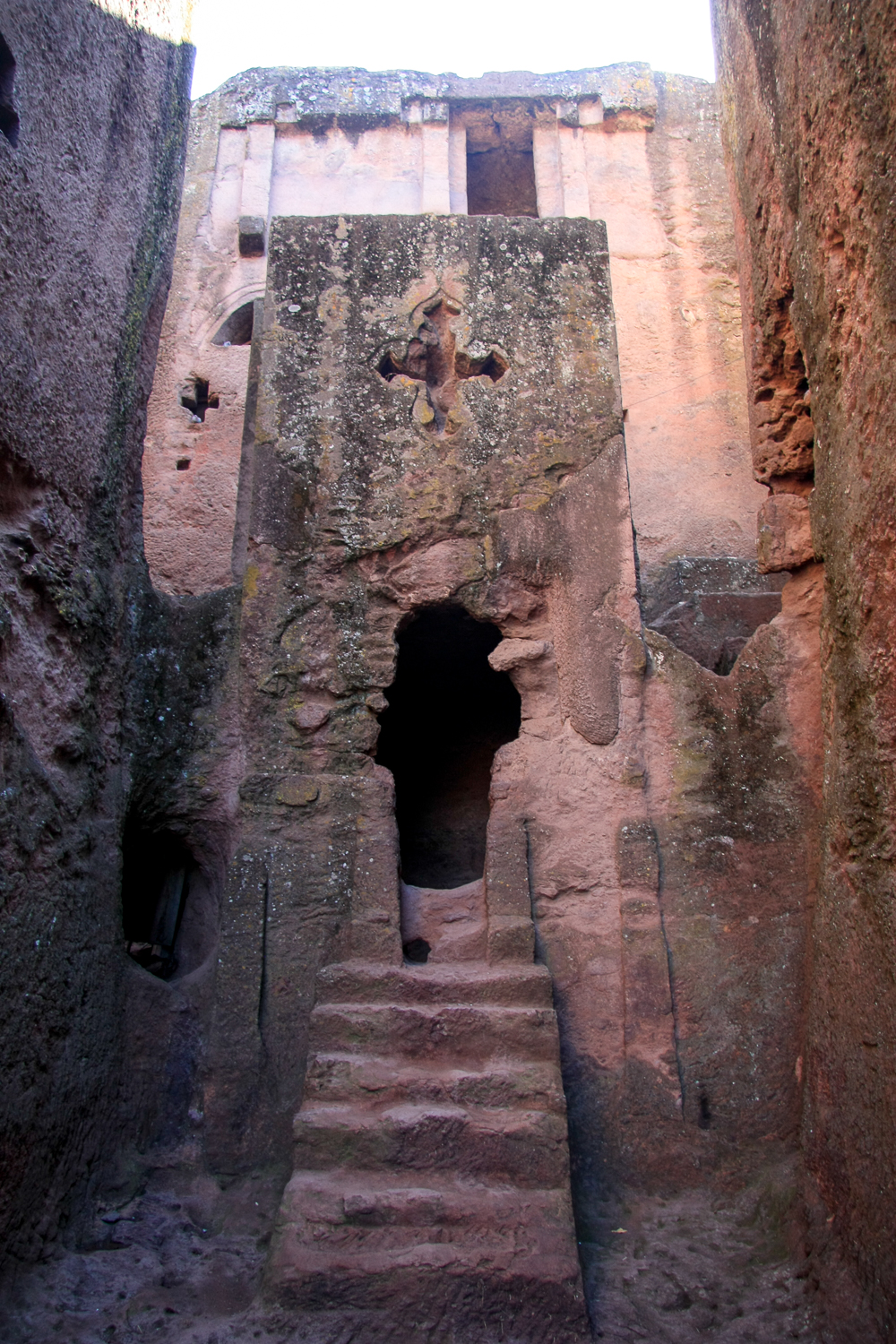 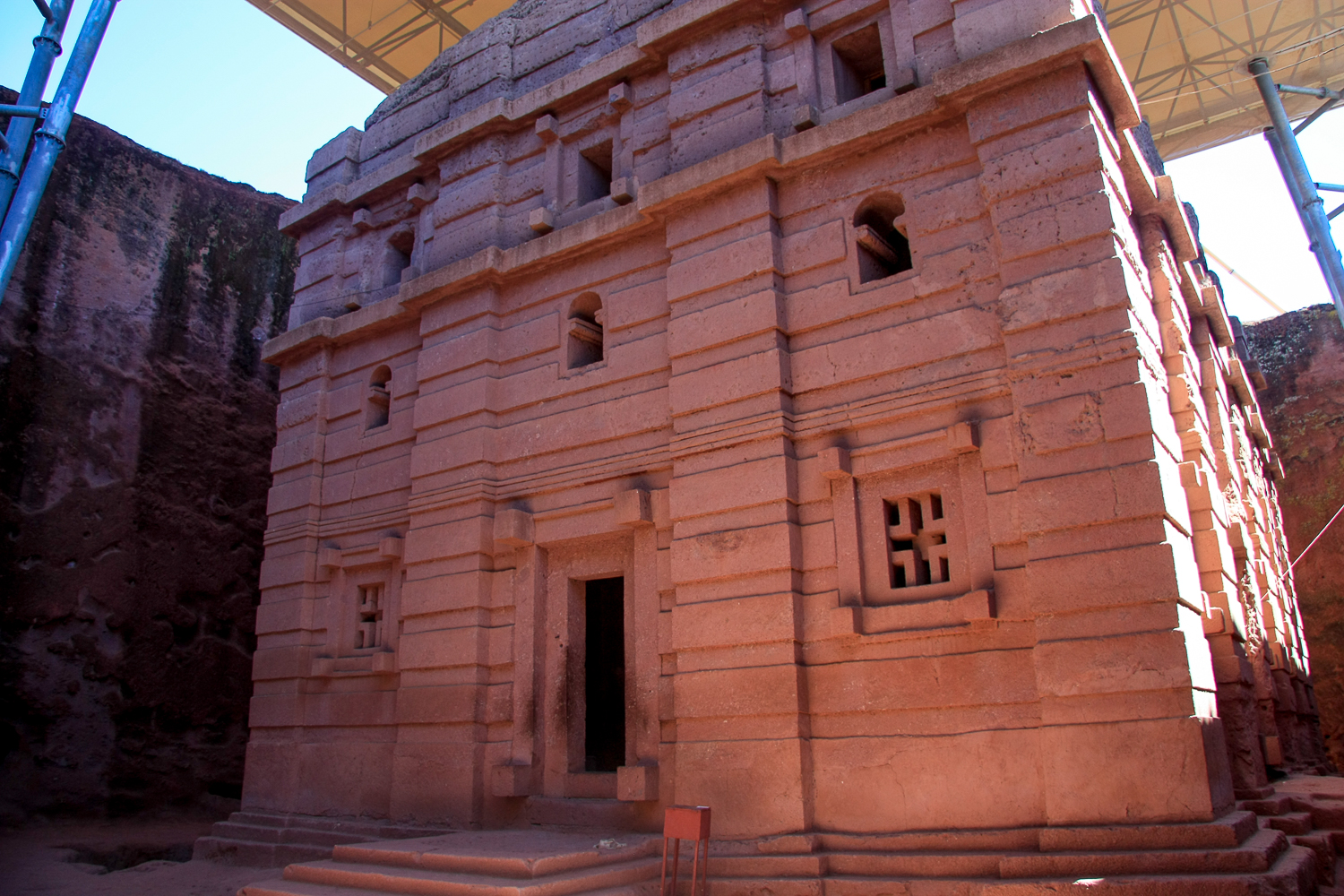 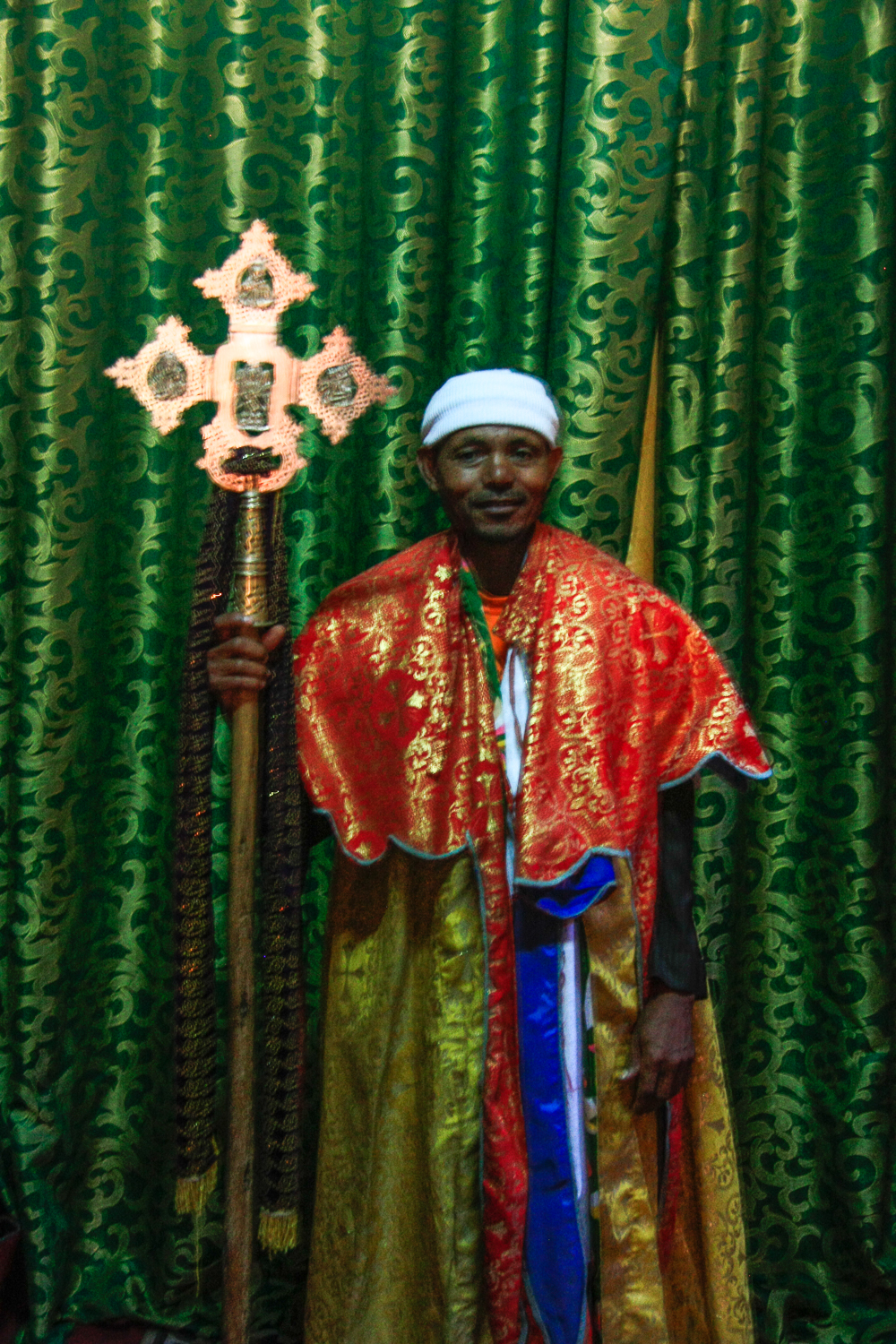 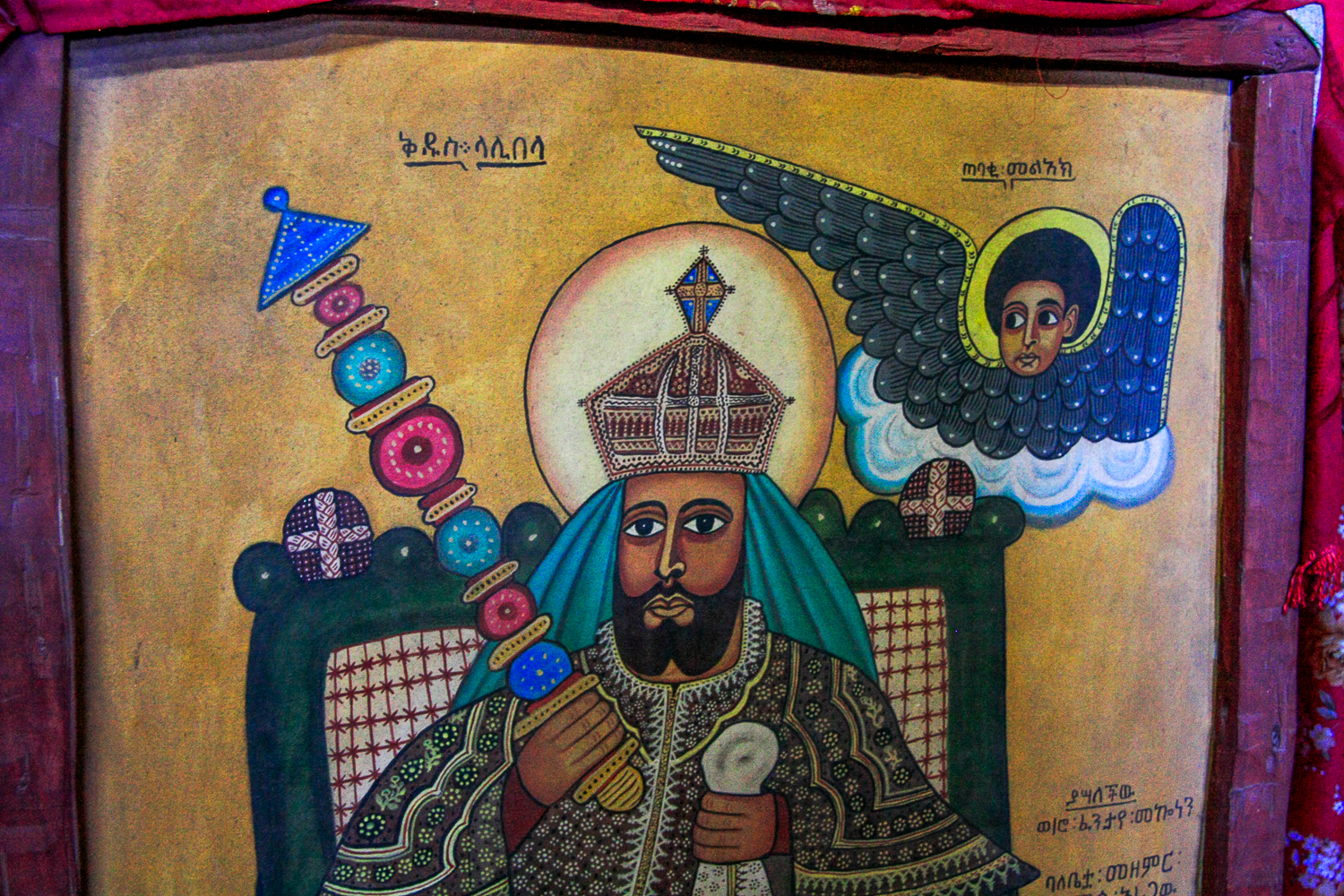 And none more so than Bet Giyorgis, the cross-shaped church standing 10m tall — or rather, carved 10m underground, depending on how you look at it. It’s even located on an incline purposely to let the rainwater drain away. 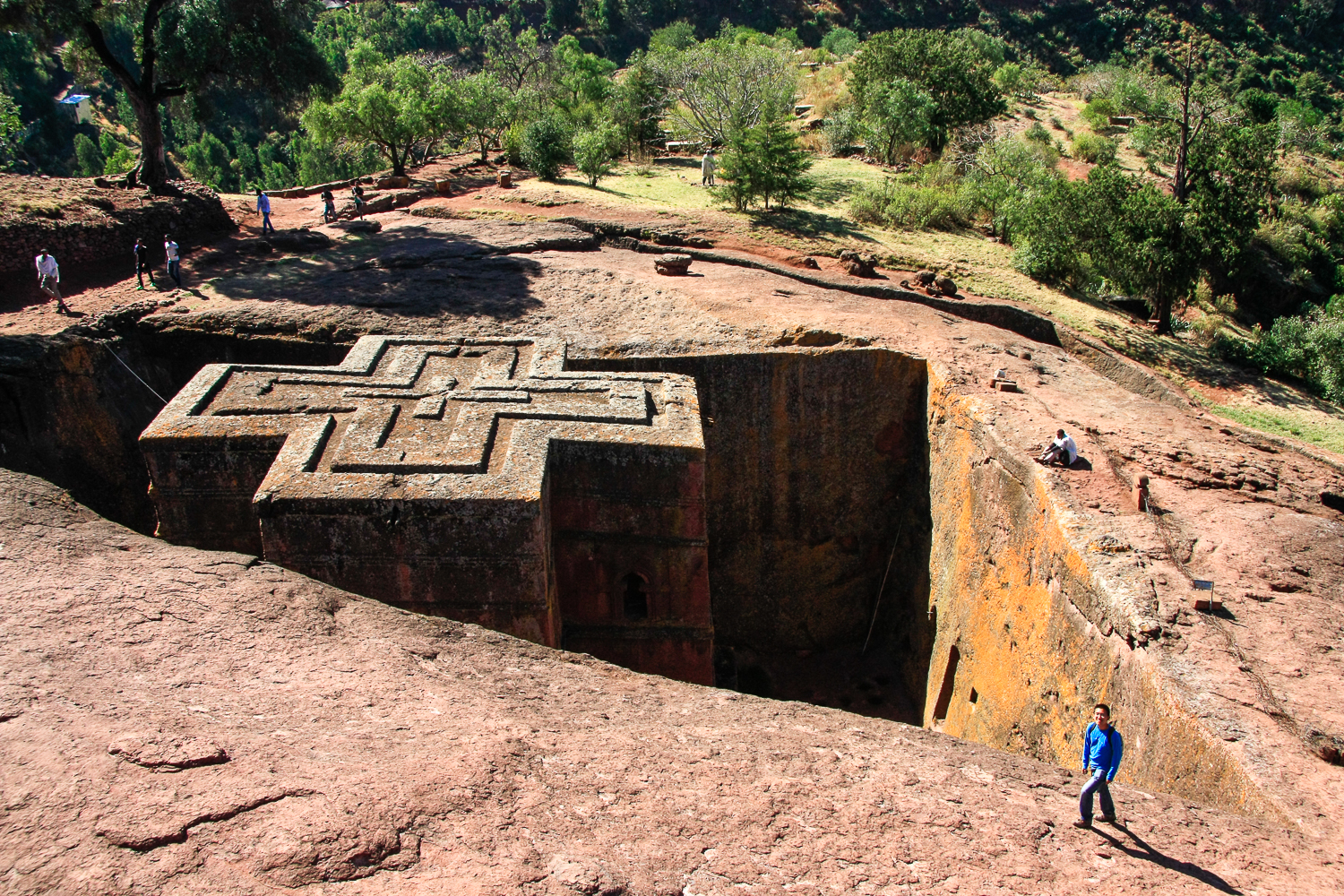 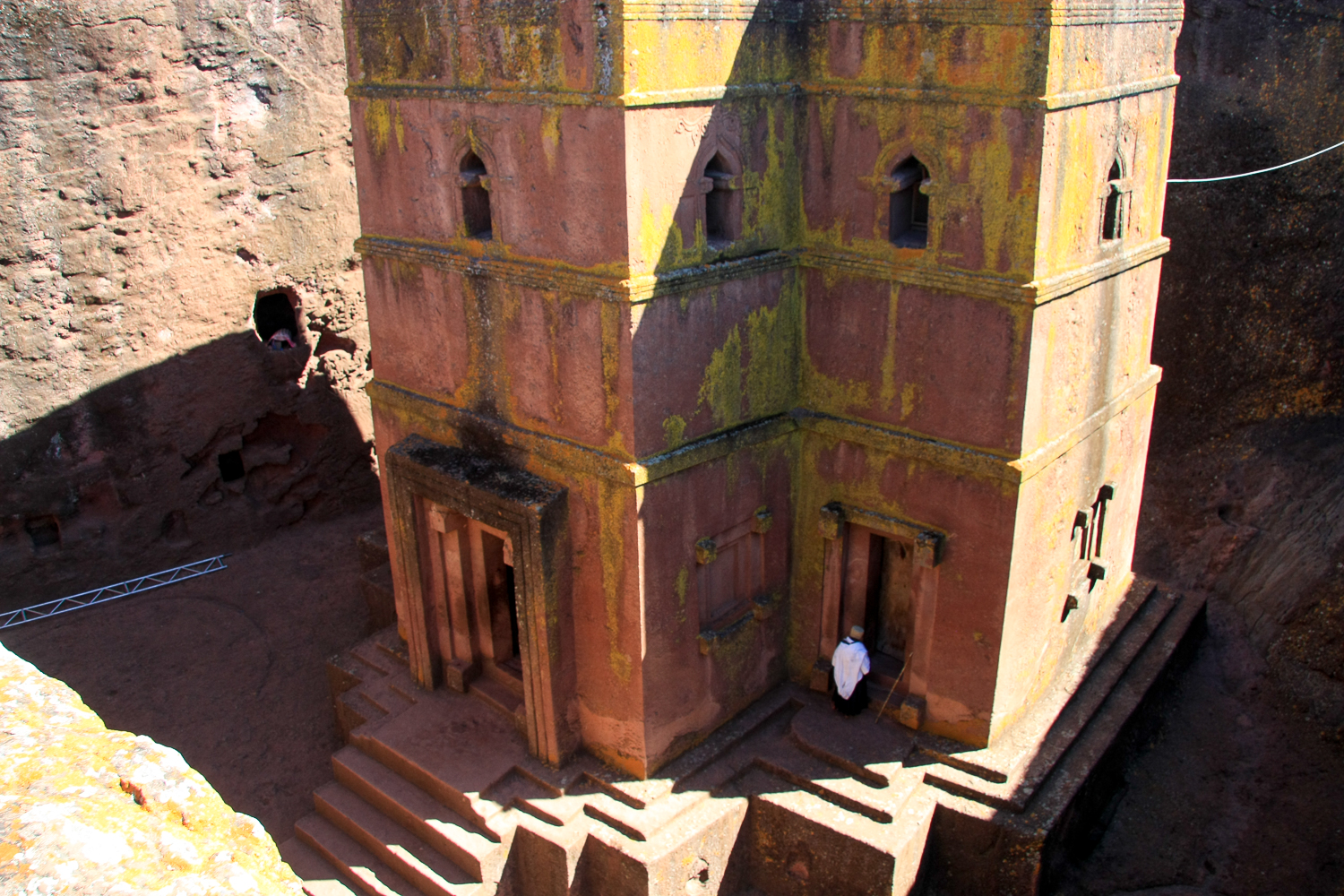 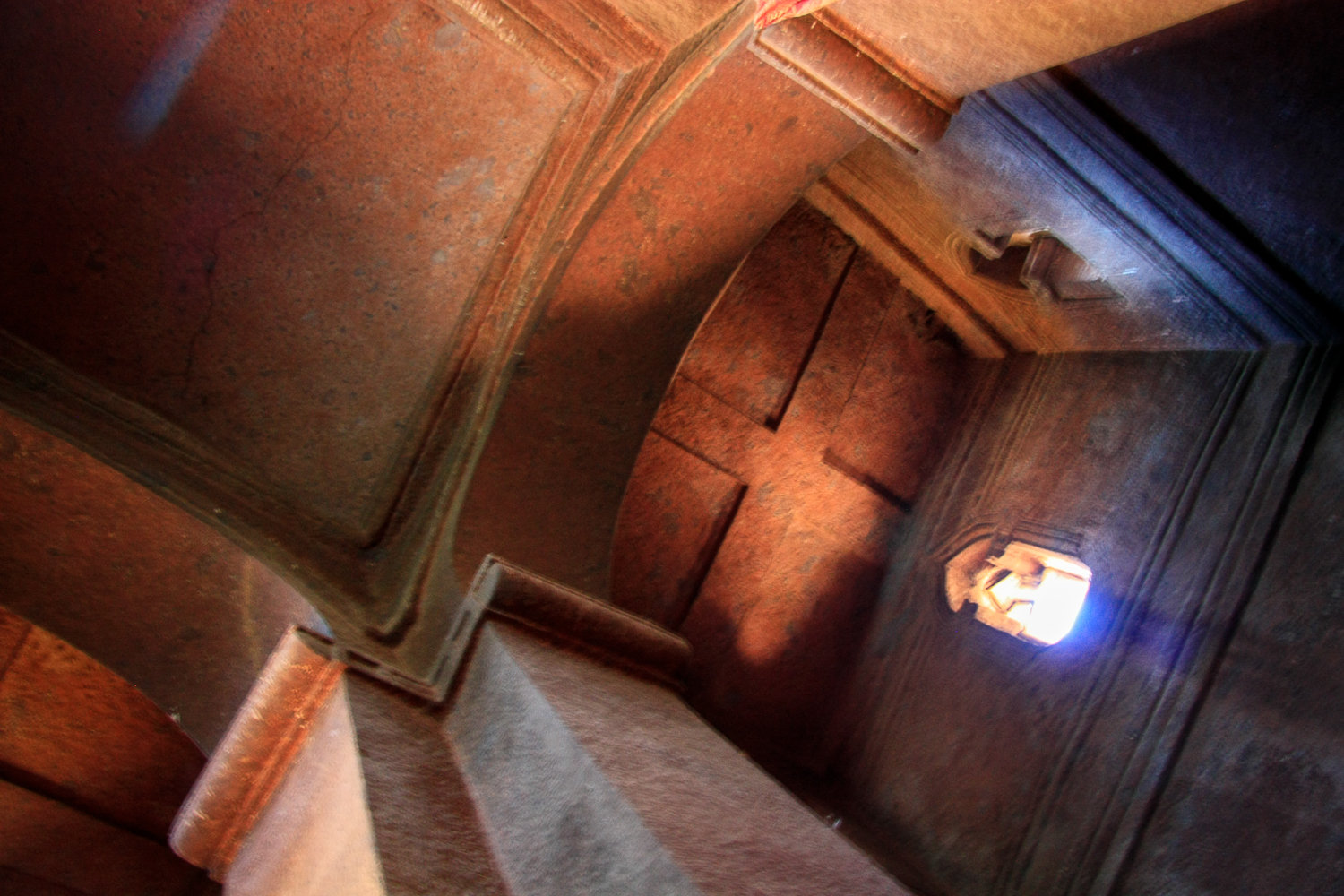 There’s far more symbolism: representations of Jerusalem, Bethlehem, heaven and hell (a 50 metre long and winding tunnel with absolutely no light; we walked through it once without a torch and that was more than enough, after bumping our heads and bodies into both each other and the tunnel ceiling and walls), dedications to saints and angels. This really could have been some vanity project of a king, but it’s amazing how much reverence and attention to symbolic detail was given. 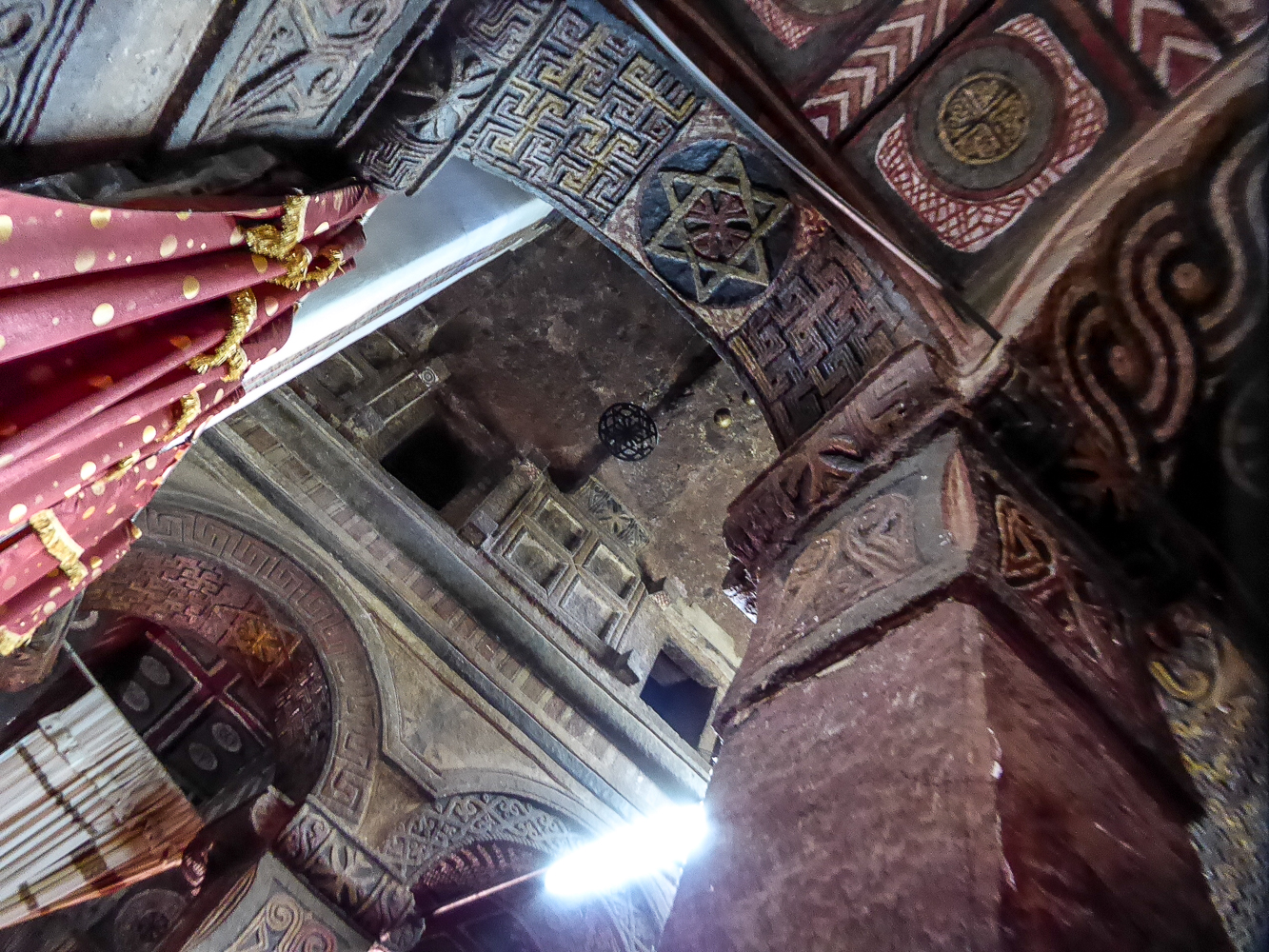 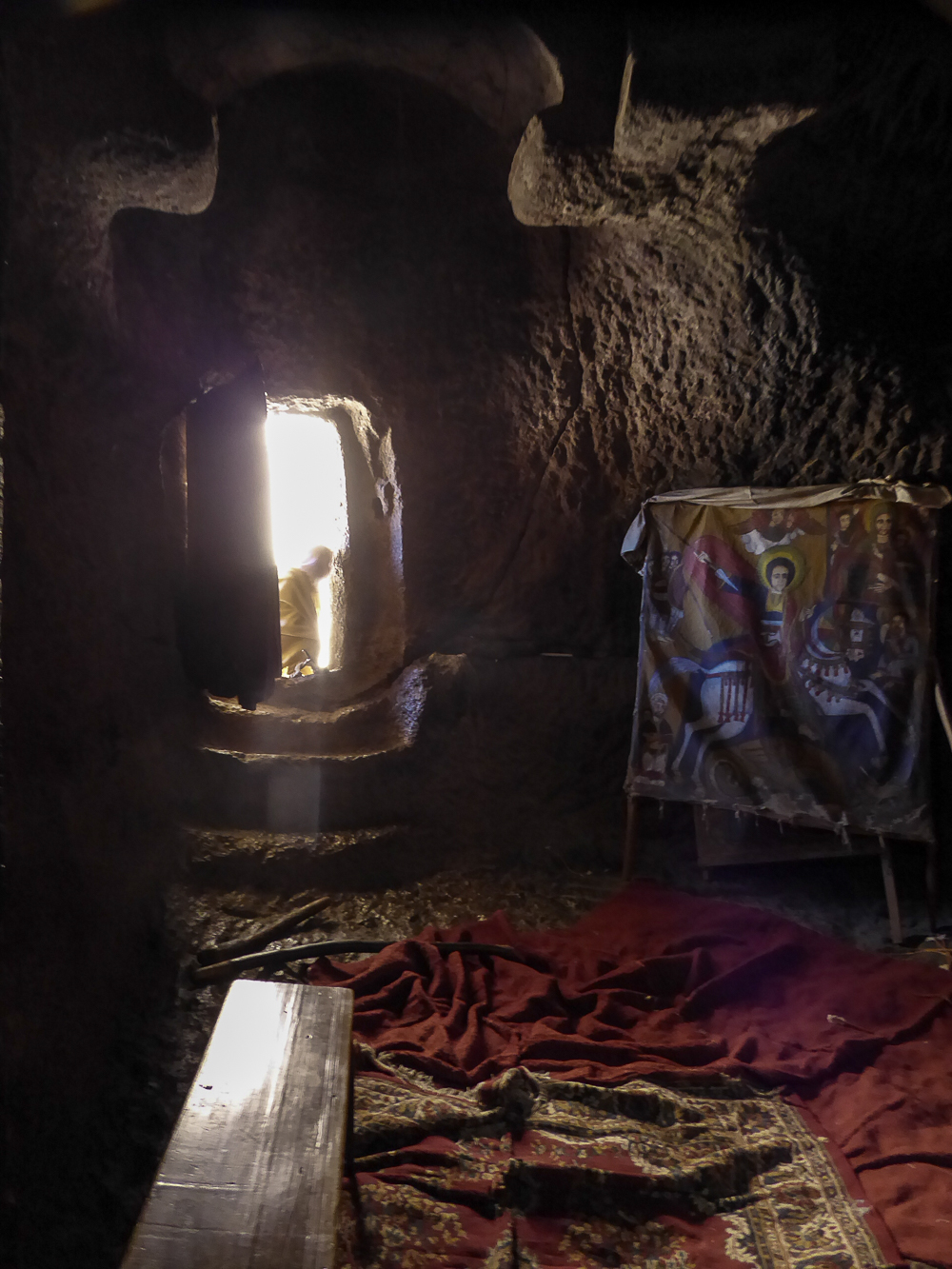 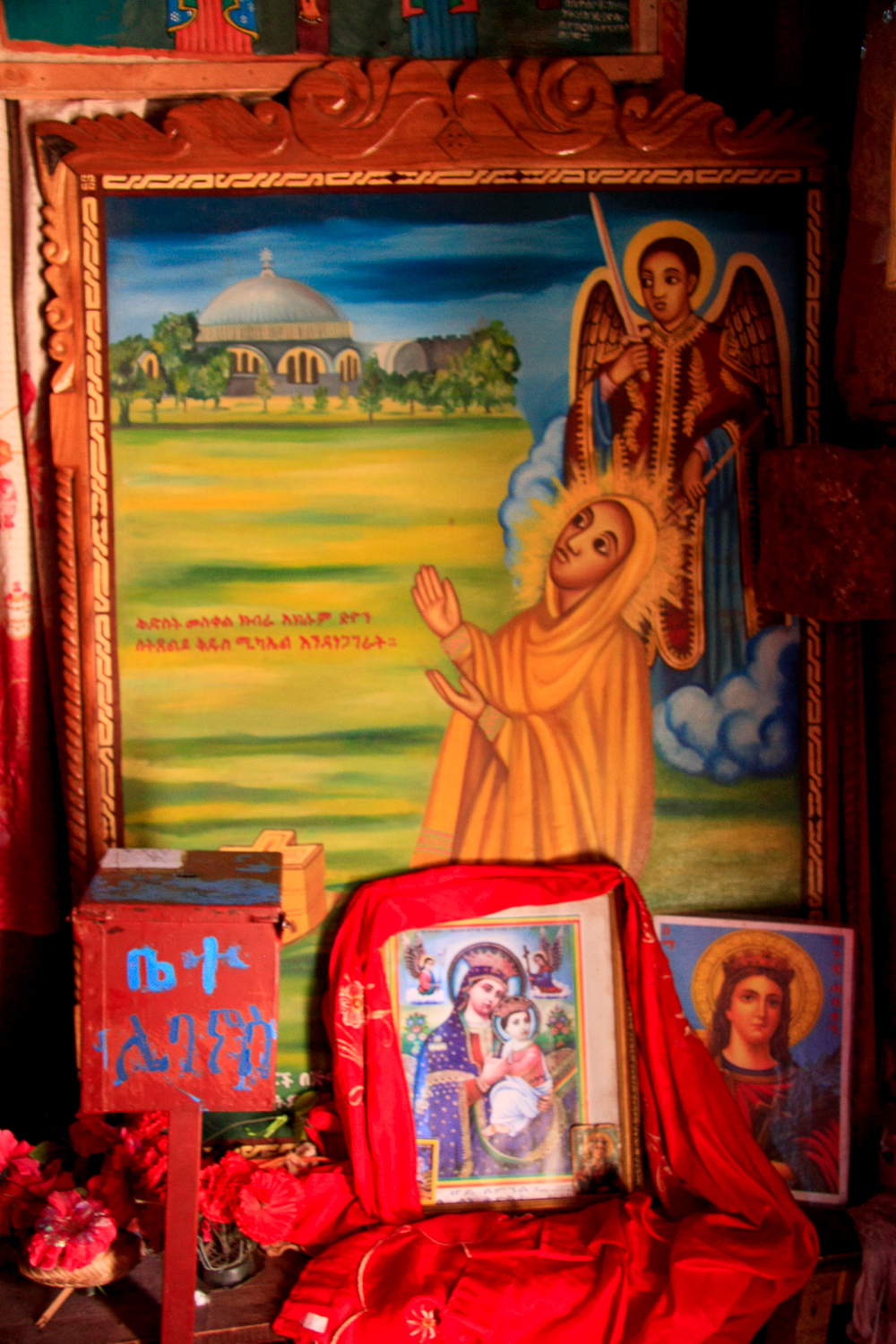 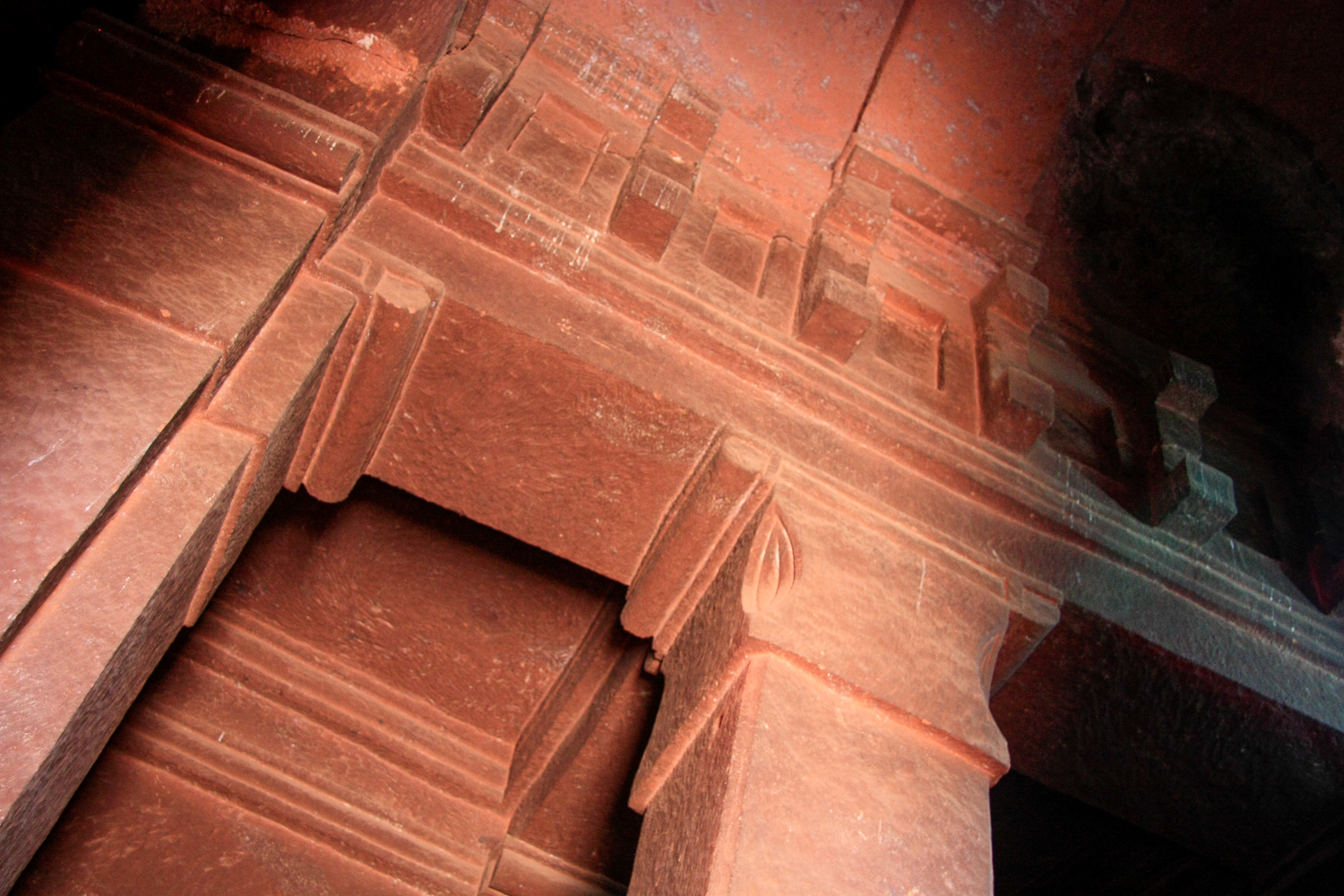 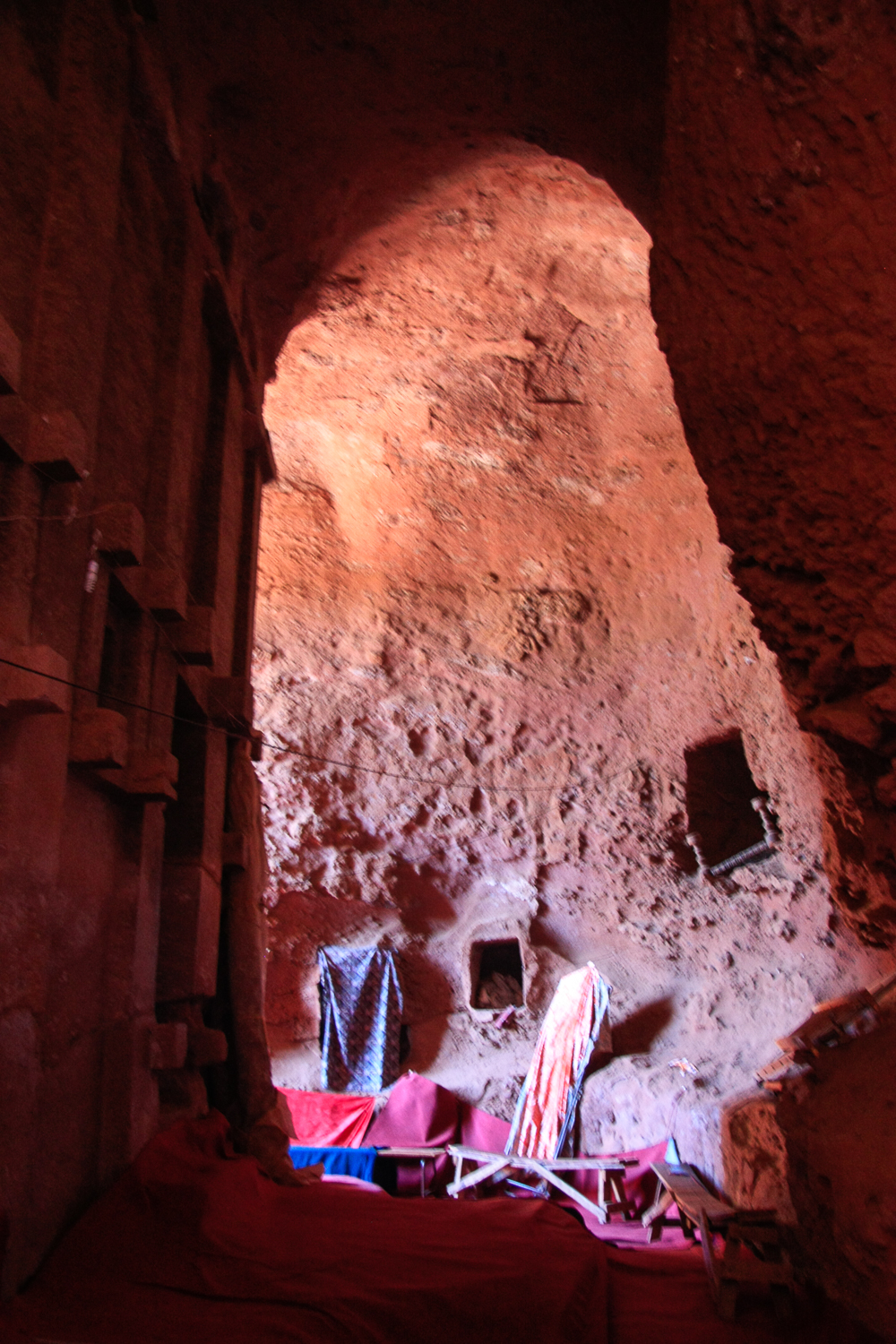 Yet it begs the question, again never answered: why? They took the hard way carving churches down and did something probably never done before, rather than just build churches from the ground up. Who knows where this idea came from.

We passed by a funeral for five villagers — a family, killed in a roof collapse. Virtually the entire village population came streaming out from Bet Giyorgis, weeping and singing mournfully, beautifully moving. Sadly, this was the umpteenth funeral I’ve passed in three weeks, but it’s very moving how much communal support there is every time. And in Lalibela, the churches themselves provided a place of solace for the mourners.

On a completely different note, the village of Lalibela is surprisingly underdeveloped for being the host of Ethiopia’s most well-known landmark, but it means that life remains normal (or humble, optimistically speaking) for its residents. The kids we encountered on the street were far more friendly to foreigners than those in other places, with fewer requests for pens and candy (though specifically to our all-Asian trio of Rosie, Yuka, and me, several times as many annoying unprompted “guess the country” cries of “China? Japan? Korea?”), but none more so than Yayo, a 13-year-old boy we ran into at least four times. Happy to just chat with us with his surprisingly good English, he provided us directions and asked us nothing in return, though we did invite him to lunch. His parents sent him from his village to Lalibela in order to get an education: in his words, “I need to read and learn. I can’t think everything by myself!” Awww. He claimed to live with his uncle and a cousin, but we later found out from another resident that his uncle wasn’t in the picture at all, and he and his cousin supported themselves by shining shoes. (In other words, he lied in order to not gain any sympathy, contrary to many other interactions I’ve had.) Whatever money and support they had to support them in Lalibela, whether from some donor or his family, seems to have run out and they’ll be moving to Addis, even further away from his family. Yayo’s got friends here too that he’ll have to leave behind. It’s really sobering to see how much value people place on education and the lengths they go to for it. We let Yayo run off to school, held for five hours in the afternoon, while his similar-aged cousin played hooky (his poor teacher was related to the deceased family and took leave) and guided Yuka through a 5-hour mountain hike that Rosie and I were far too exhausted and lazy to care to attempt, asking nothing in return. 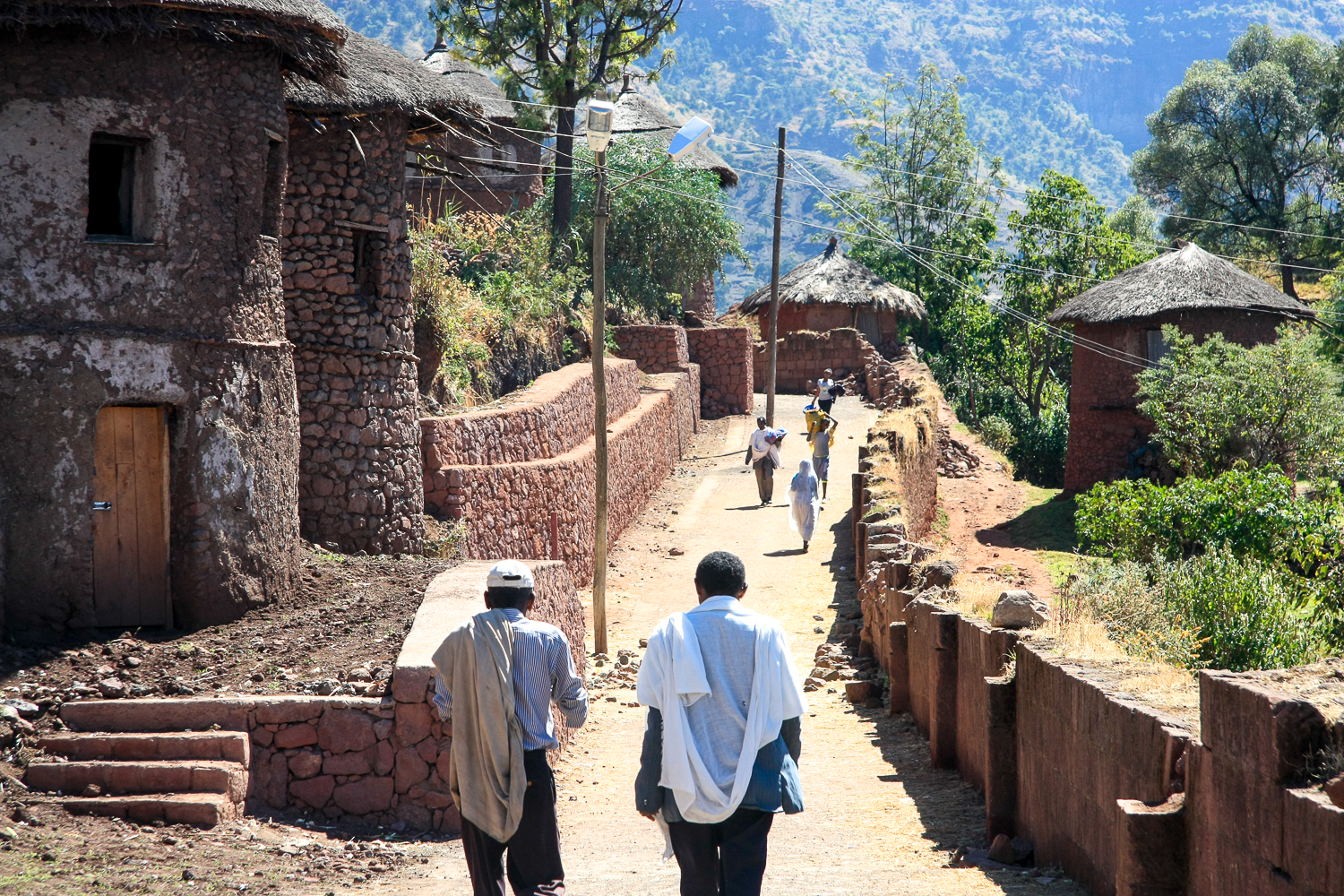 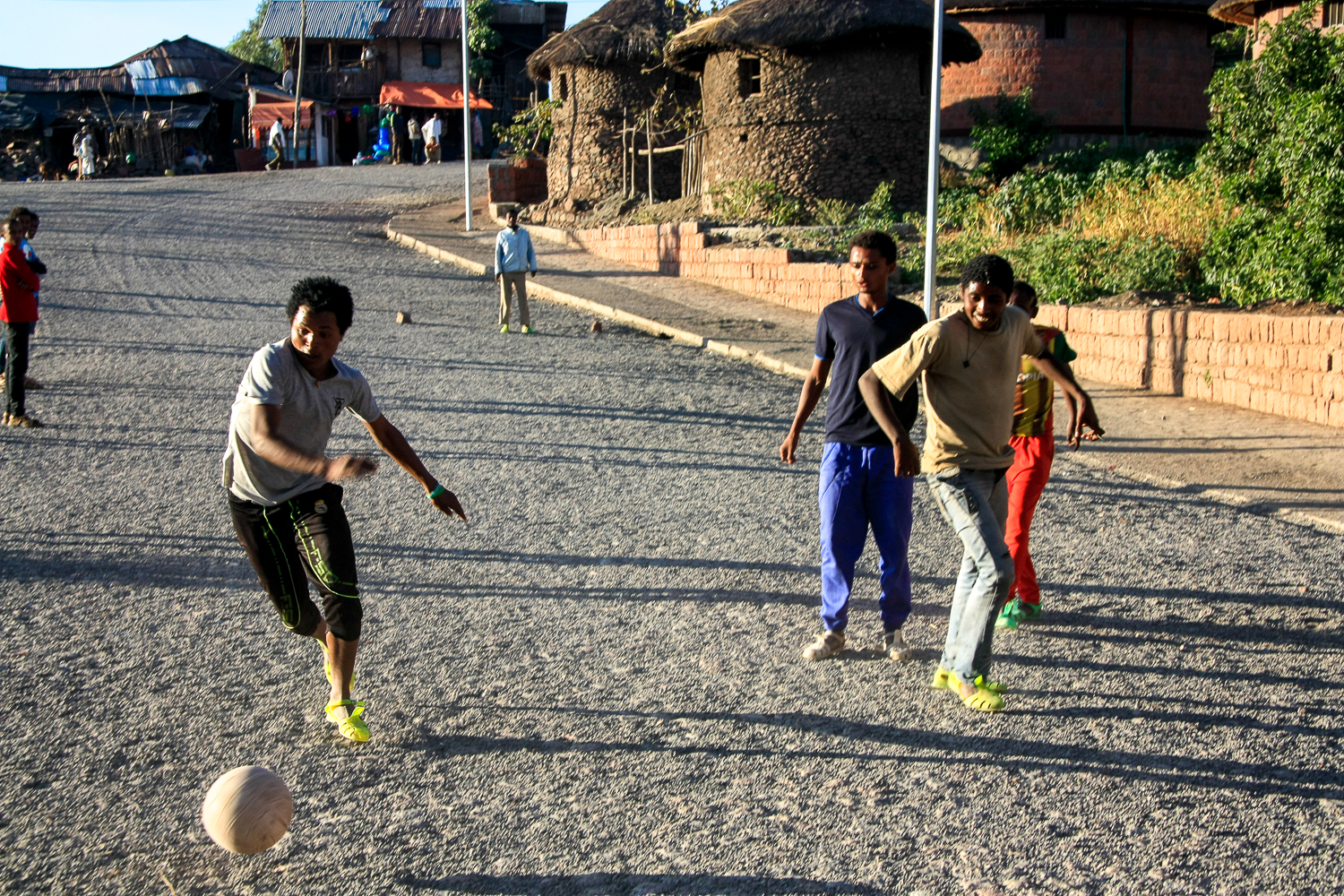 And at the other extreme, Lalibela attracts some strange folk. A Scottish pensioner decided life got too boring and up and moved herself to Lalibela, finding a local business partner and opening the most avant-garde looking restaurant I’ve ever seen, designed by two Ethiopian architects. Perched on a hill at the edge of town with a lovely sunset view and good burgers and even shepherd’s pie, Rosie, Yuka, and I went for two consecutive nights, reuniting with Martin and Thomas from our Danakil tour, Hendrik and Lies who I met in Addis several weeks back, and inviting Jamel, Helen, and their little daughter Ciara all from Toronto, who we just met. Being the most raucous group of people, spanning several tables on several floors, we had a wonderful time over dinner and drinks and marvelled at the strange situation we were in: a group of people meeting all over Ethiopia and converging at this one spot, watching a sunset on the hillside from some space-age restaurant in a town with 900 year old churches and no paved roads. No big deal. Lalibela brings in some strange people, and maybe we are too. 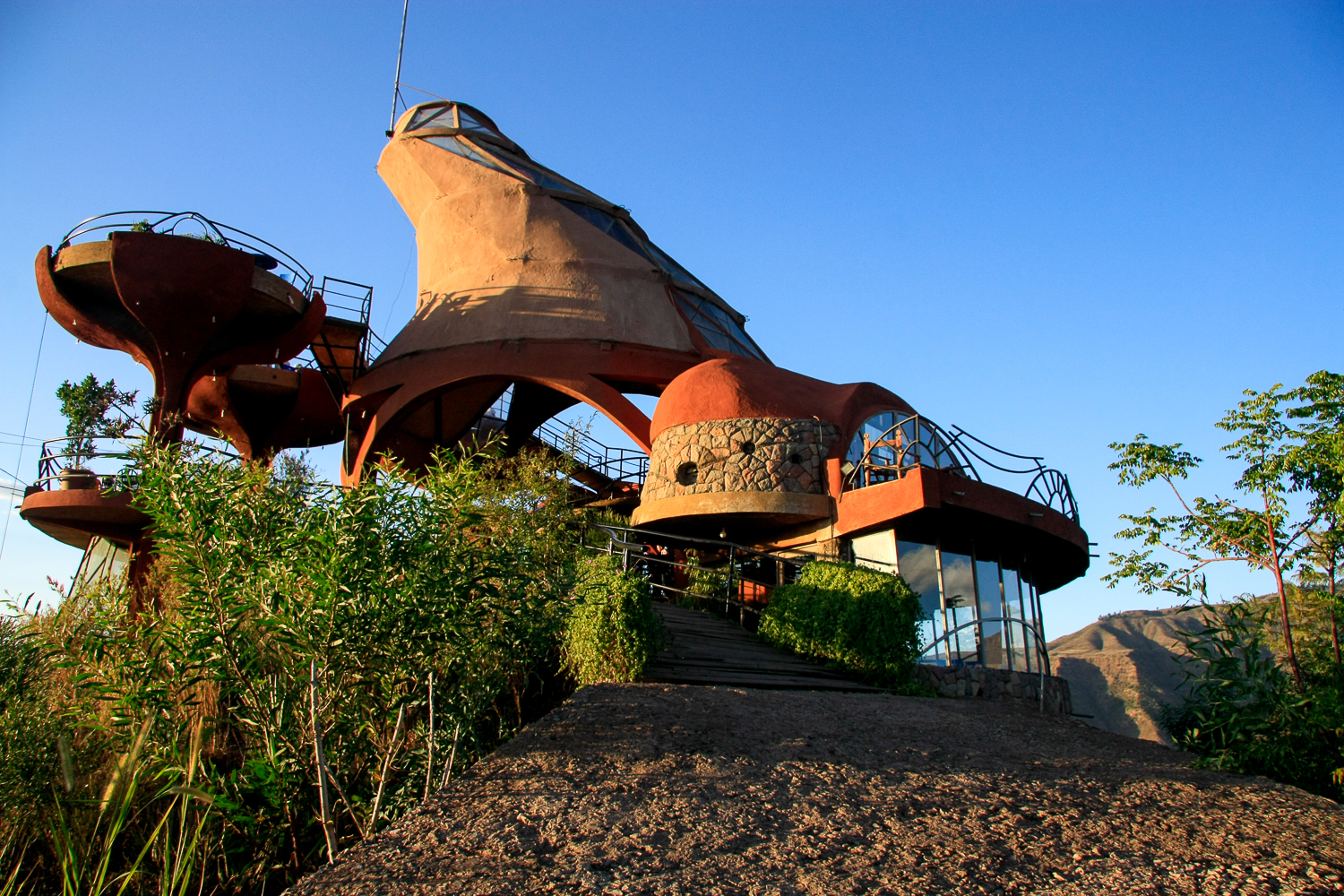 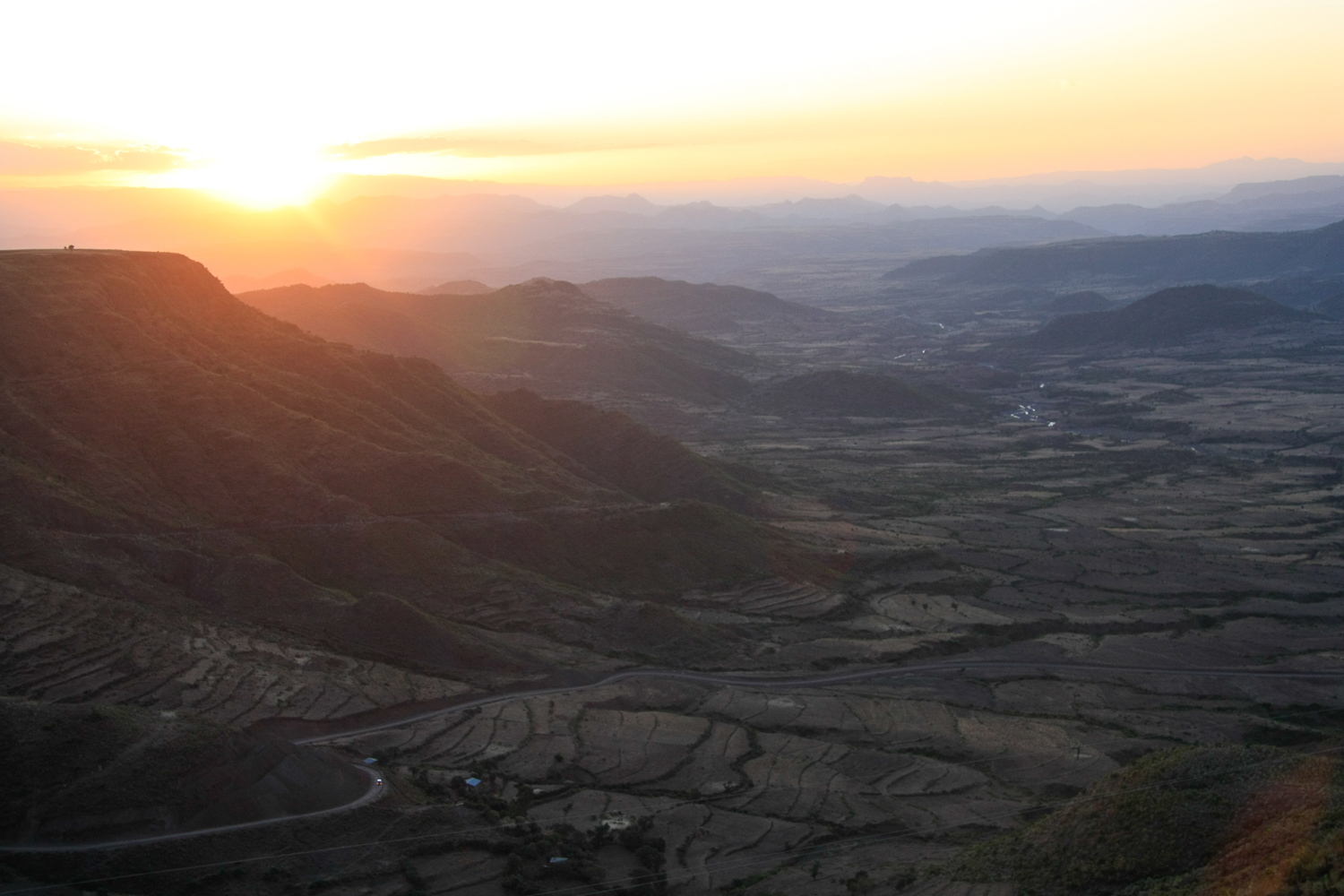 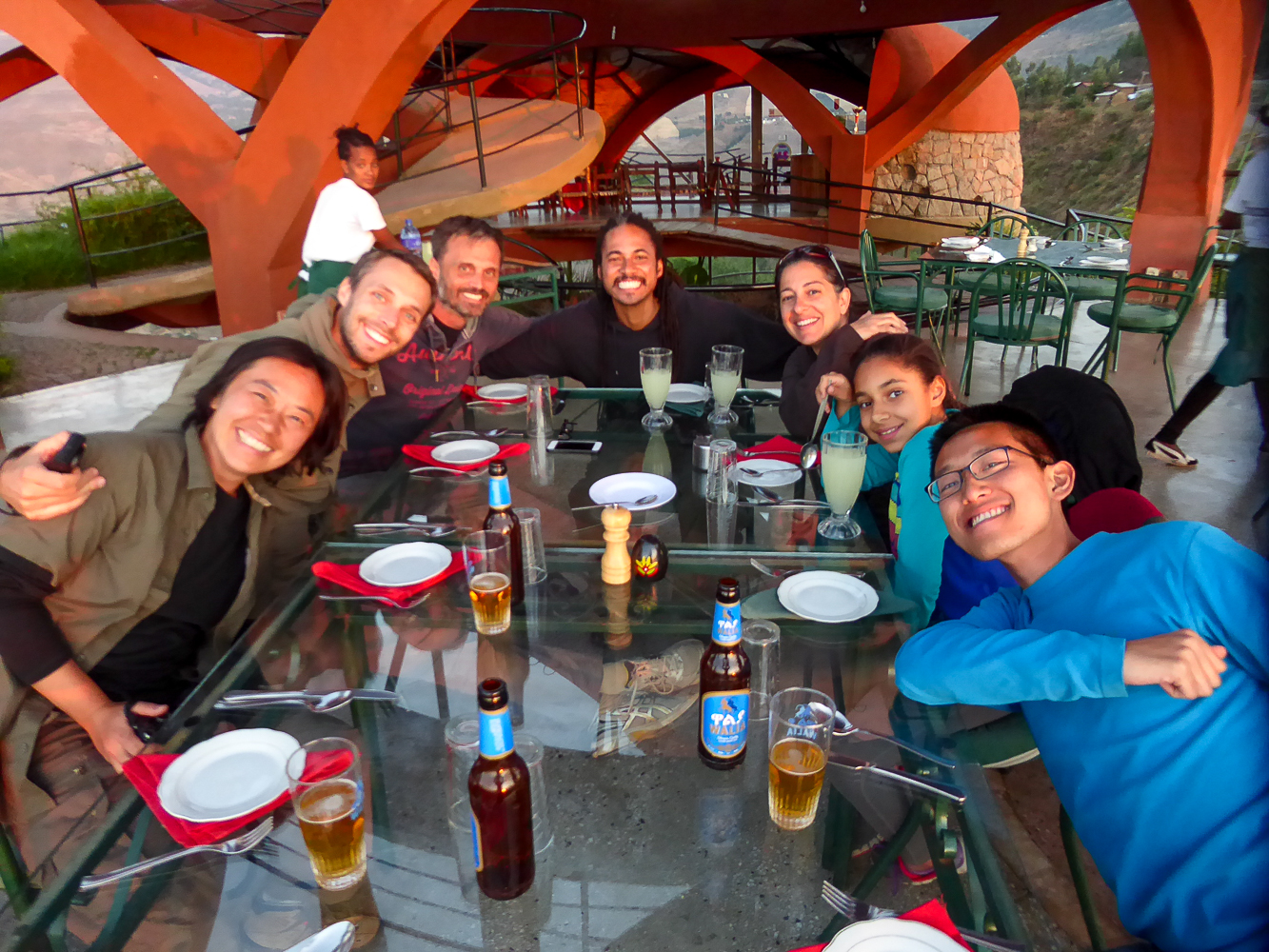