Petra is Jordan’s star attraction, and it’s not hard to see why.  I came in not having seen any pictures, knowing absolutely nothing about the sight other than its reputation as a must-see destination, a formerly lost city.  We began our first day at 6 am, hoping to avoid both the crowds and the heat.

The approach is long – a 15 minute walk from the town of Wadi Musa (“valley of Moses”, so named as tradition states this is where Moses struck a rock with his staff, releasing water), then a few hundred metres from the visitor centre to the Siq, passing a few tombs in the process.  Impressive already…and then we reached the Siq. 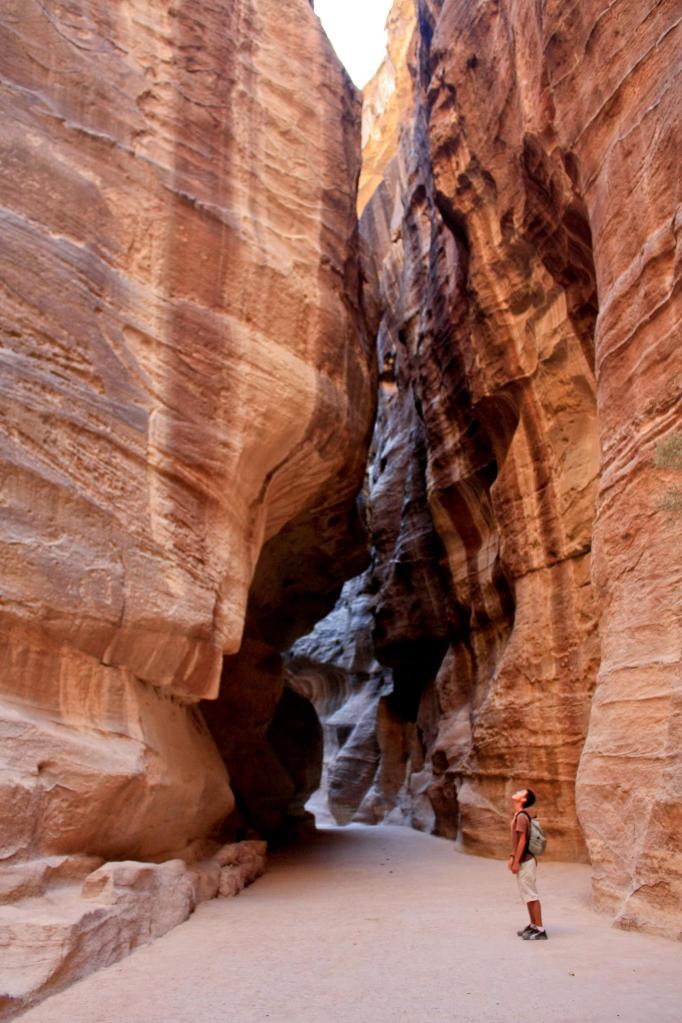 Wow.  The Siq is a beautiful, enormous, dark gorge pathway – another few hundred metres – leading to the ancient city of Petra.  Under the dim morning sun, the rock walls had a pale glow, enough to see the amazing striations of colour and all sorts of reddish hues.  Being there without anyone around was a priceless experience.  All along both walls is some sort of canal – the Nabataens (the empire that constructed the city in the first place) carved it out of the sandstone.

Well actually, they carved the entire city out of sandstone.  Almost every single “building”, most of the ones remaining being tombs, was carved INTO the natural sandstone formations.  The finest example of this is the “Treasury” (Al Khazneh), a tomb for a former king.  The facade has a Roman influence on it – pillars, something like a balcony, and “windows”.  It’s just a facade!  There’s a very prominently visible fake urn carved on top, rumoured to contain treasure, hence the name.  Invaders have clearly fallen for the ruse, as there are bulletholes covering the urn and the area of the facade around it. 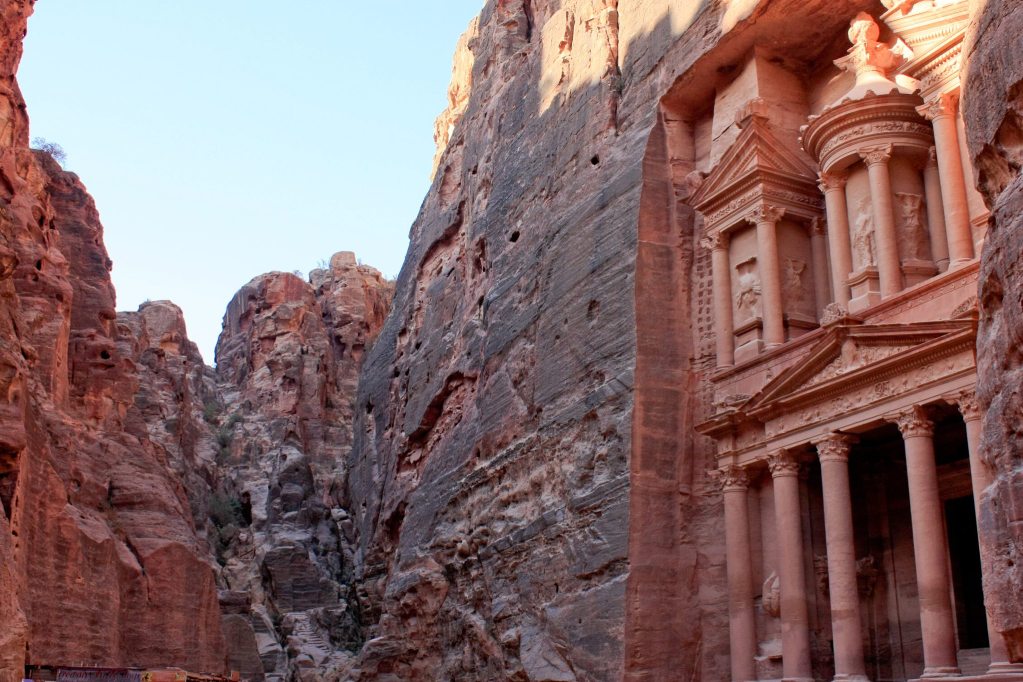 Petra was constructed by the Nabataens in the 300 BCE era, with elements of Greek, Roman, Egyptian, and Syrian architecture as well as their own (though the remains of that isn’t so visible) – a testament to the many ruling civilisations that either had significant influence at the time or took over – which ones are which, I’m unclear.  After Roman rule ended in the mid 300s CE and an earthquake destroyed much of the city, it fell into disrepair but passed into the hands of the Crusaders and later the Islamic empire.  Eventually around the 1300s, I think it became lost to most of the world…but in 1812, a Swiss explorer was the first to “rediscover” Petra, finally revealing its existence to the Western world.

We proceeded past the Treasury and several other tombs and found a steep path to the High Place of Sacrifice, noted by others as a 45 minute hike (without stopping, we took 30) up countless stairs.  We passed a few mountain goats.  At the top, we reached the altar area (really just a flat expanse), which provided some stunning views of the main street area of Petra and the barren natural scenery around it. 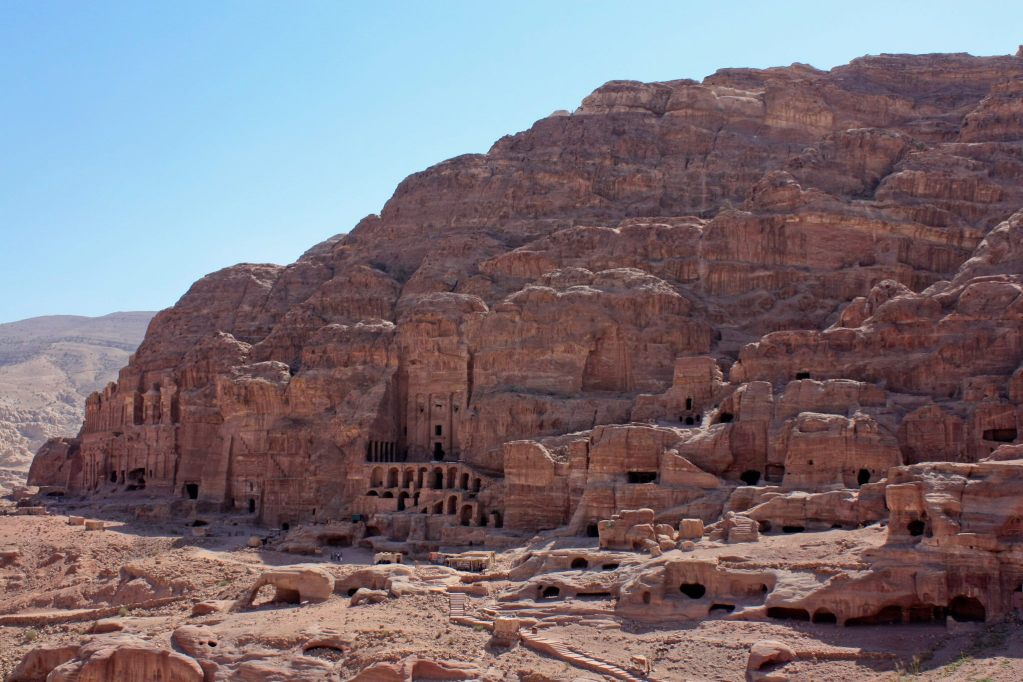 We descended via an alternate valley path, entering random tombs here and there – only a fair few had any sort of remaining decoration inside.  By the time we reached the bottom, the sun was starting to heat things up, and the tourists were flooding in as well.  Nevertheless, we decided to continue, passing the ruined palace and water basin (being built from the ground up instead of carved into the sandstone walls, they were in a much more significant state of disrepair) to the famed Monastery trail, a roughly 1 hour hike some 850 steps up. 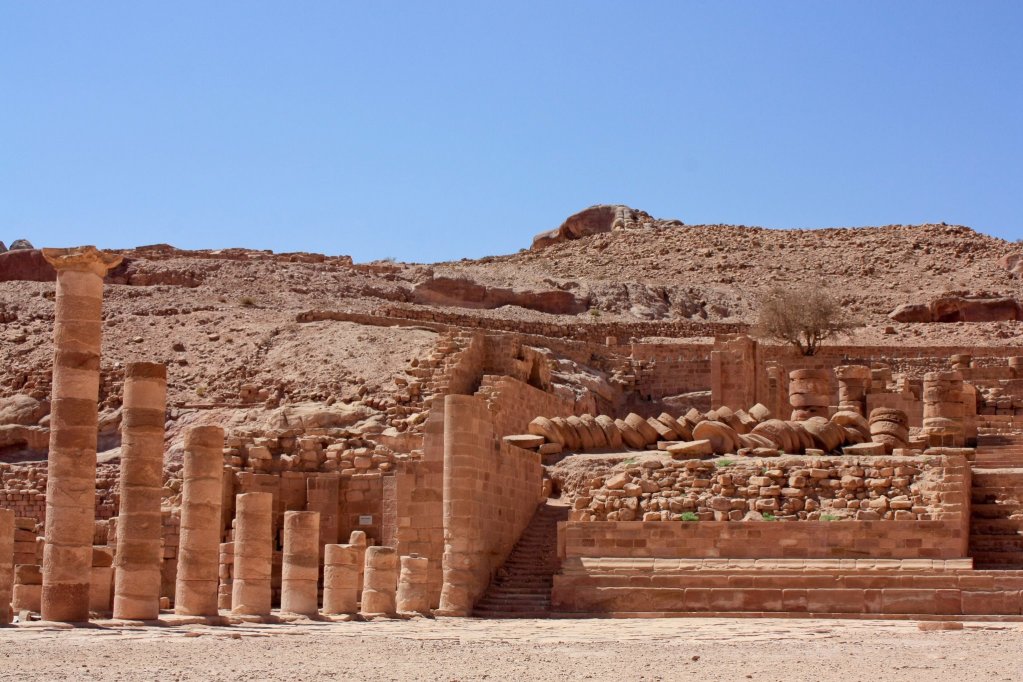 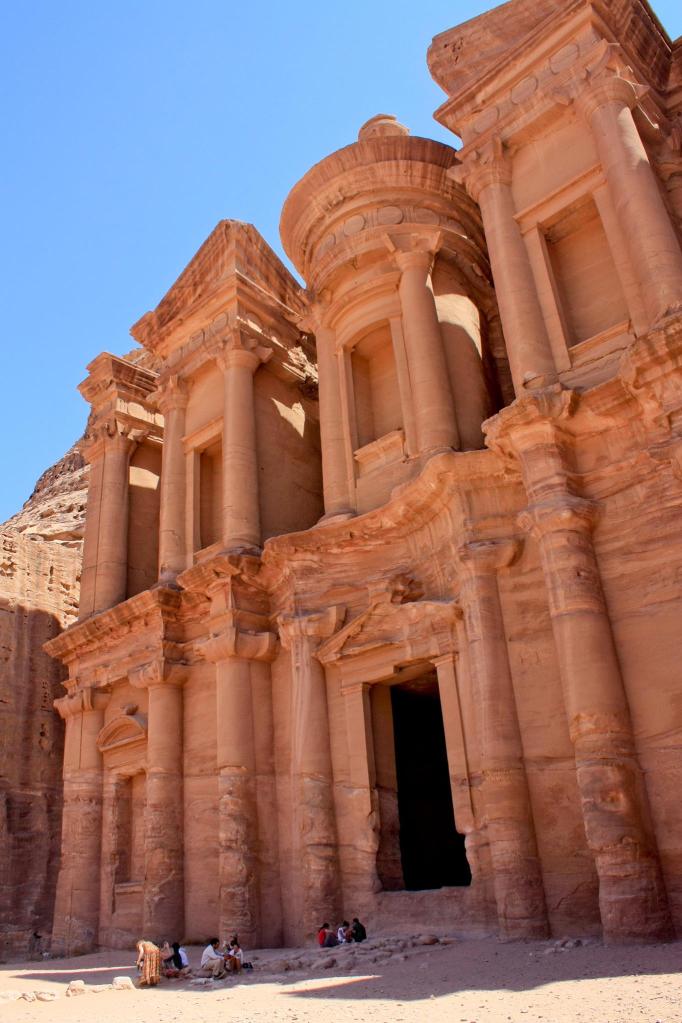 Though there were more people at this point, we were happy to almost everyone there – both young and old – walking instead of hiring a donkey.  (Legitimate business for the local bedouin, who sarcastically and hilarious advertise their “desert taxis” and “limousines”, yes, but hey, it’s cool that the visitors aren’t lazy!)  The sweaty hike was worth it for the scenery on the way up alone, but felt a lot more validating when we rounded the final corner and came upon the Monastery, the largest facade of them all.

After a short break in the shade and light breeze, we continued a little further up.  I’m amazed that all along the trail, there are some souvenir shops – locals have to do this climb every day!  At the very very end though, on some cliffs were souvenir shops-turned-tea stalls.  They were unoccupied, but I really wonder how they got everything up there, the tent structures, the tables, the souvenirs…

We found one at the very final edge and were rewarded with the best view of the day – desert hills leading to a flat expanse of nothing as far as the eye can see.  Given that the tent was abandoned, we took a couple stools and must’ve sat there for at least half an hour, taking in the incredible scenery.  After a long rest at the top, another long rest at one of the stalls in the main street (Bedouin owners: “Have a break!  Have a Kit Kat!”) and an even longer hike all the way back to our hostel in Wadi Musa, it had been a long day – we left at 6 am and returned at 3 pm, exhausted.

Having gone through the two longest and highest trails, we were able to take it much easier the next day.  Starting at 7 am, we headed to the main street, containing the royal tombs and the theatre.  Our main target though was a view of the Treasury from above.  We found a somewhat hidden but well-kept trail giving us a panoramic view of the theatre, thinking it ended there (some people descending the trail who were looking for the Treasury panorama told us so, disappointed).  Luckily for us, at the top, we ran into a Spanish couple who we had seen on the trails the day before, and they pointed us to the right direction – an unmarked but visible trail from the panorama.  Passing some mules and brightly-coloured lizards, we found the little viewpoint with the spectacular view.  Curiously enough, it seems that a local bedouin set up his little sleeping tent there.  A bit of an odd place to live, given the climb and the lack of food or water anywhere nearby…

Two days was enough to see everything.  (On the other hand, coming in a giant group tour and having a single crowded, hot afternoon does not do the sight justice.)  It was hot and exhausting, but absolutely worth it.  Incredible as it is, it can get a little repetitive seeing all these beautiful facades carved into rock walls, the countless tombs everywhere…  But the surroundings, and especially the Siq: that will never get old.

One thought on “Wonder”