Continuing to avoid the stamp stigma meant a frustratingly long border crossing process to get from Jerusalem to Amman – separated by about an hour directly on the road. We took six.

We first took the bus to Ramallah again, in hopes that the Representative Office of Jordan would be open this time. But when we got there and asked for a taxi to the “embassy”, we were taken not to the office, which was quite some distance away, but merely around the corner, to what the taxi driver and the people at the building insisted was the Jordan embassy.

“MBC”. Jordan TV channel MBC. Oops. The people inside were very friendly and called us another taxi, specifying our destination in Arabic. We got to the office, paid ₪200 (a poor conversion rate for the normal 20 Jordanian dinar cost), and were out of there in 30 minutes.

Next, we found a shared taxi to the Allenby border crossing. (We had to wait about an hour before it filled up and left.) The Allenby crossing is the only one that officially doesn’t stamp – not the Palestinians (they never do anyway), not the Israelis, and not the Jordanians. (The Jordanians consider West Bank to be occupied territory. It also used to belong to Jordan, so in effect, Jordan does not treat it as another country.) It’s probably the most complicated border I’ve ever crossed, but this is the only one Palestinians can use. Even if they live in Jerusalem, Palestinians are not allowed to use Ben Gurion Airport. Rather, they have to fly into/out of Amman, Jordan, then cross over via the West Bank by land. Having to experience this border personally was an eye-opening experience.

First, we arrived at a terminal where we had to push towards a counter (no one was lining up, everyone was pushing) to buy a ₪10 bus ticket. To where? We didn’t know. We bought the ticket, had our passports inspected by the Palestinian customs agents, who stamped a piece of paper, then boarded the bus…which drove all of one minute before we were all asked to get off and go through a metal detector in the middle of nowhere. (This was a completely full bus of passengers!) We piled onto the bus again, which drove another minute to a lowered barrier. An agent checked the bottom of the bus for bombs, and another came onto the bus to take the pieces of paper given to us from the customs agents. After the check, we drove to the Israeli border.

At the Israeli customs building, we threw our bags into an x-ray machine and went through another metal detector. (Really?) As foreigners though, we were told to sit down and wait before eventually directed to another building rather than to the normal passport check counters. In there, we had to pay an exit tax of ₪167 before going to the customs agent (explaining the stampless situation). Though completely confusing, people were friendly. We left the building, uncertain where to go. Some other hapless foreigners jumped onto a bus, so we did as well.

This bus took us to the Jordanian border, a fair distance away. It cost 2 JD – a bit of a problem since neither Bernhard nor I had dinars with us, so we paid at a poor Israeli sheqel conversion instead. After yet another x-ray and metal detector, everyone’s passports were taken, checked, and not stamped before being returned to us. Finally! Success: at last, in Jordan, and no stamps. But again: I can’t imagine going through this on a regular basis, as the Palestinians do.

After changing a bit of money to JD, we took a taxi to Amman for 20 JD – couldn’t complain, it was a roughly 40 minute drive. We only planned one night in Amman, and we arrived in the evening – it was still enough. It’s not a pretty city… We were extremely hungry, having not eaten anything but breakfast around 10 am, but since it was Ramadan, we had to wait until iftar (sunset, breaking of the daily fast) before we could go out and eat. We walked around a bit, noting some not-very-well-preserved ruins of Roman architecture. It’s just a traffic-clogged city, and certainly not very clean. We tried to find the Citadel that night, but wandered up the wrong road. We gave up after a long uphill walk in the wrong direction, but at least the city looks prettier at night all lit up, with the filth obscured by darkness, the air cleaner, and the heat subsided. So we never did go to the Citadel, but I guess that means I have a reason to come back to Amman… 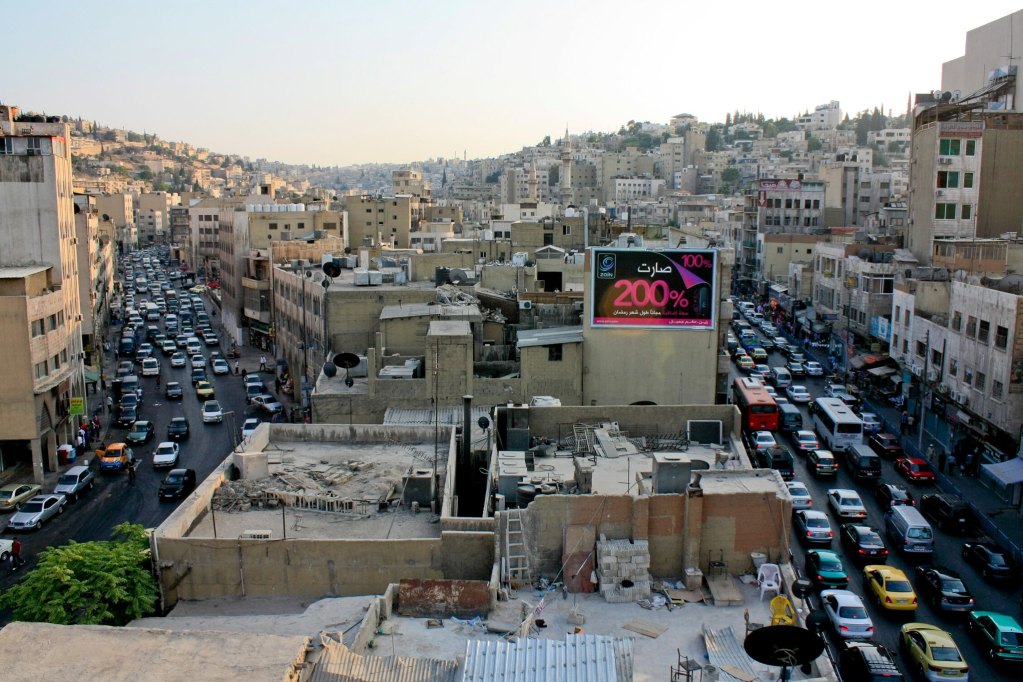 The next day, we took a hostel-organised tour and left Amman. It was a long drive on the spectacular Old Desert Highway to Petra…though due to the heat, we were all guilty of falling asleep on occasion.

Our first stop was Madaba, a former Moabite town that is now famous for its amazing Byzantine church. It’s covered in stunning mosaics that look like paintings, but the most stunning is a mosaic map of the Holy Land on the church floor.

Next? Some mosque somewhere. We were confused.

Third was impromptu; we were driving through Wadi Mujib, a giant, deep valley. The stark contrast between the barren desert landscape and the greenery beside the dammed river running well below was jaw-dropping.

Our final two stops were Karak and Shoubak, each with spectacular Crusader-era castle ruins. In Karak’s case, it’s a city that dates back to biblical times, belonging to the Moabites and the Assyrians at certain points. Shoubak was still being excavated. Both were open to wandering and climbing around, with surprisingly well-preserved rooms and hallways, and of course a beautiful view of the scenery around, being perched on high altitudes. 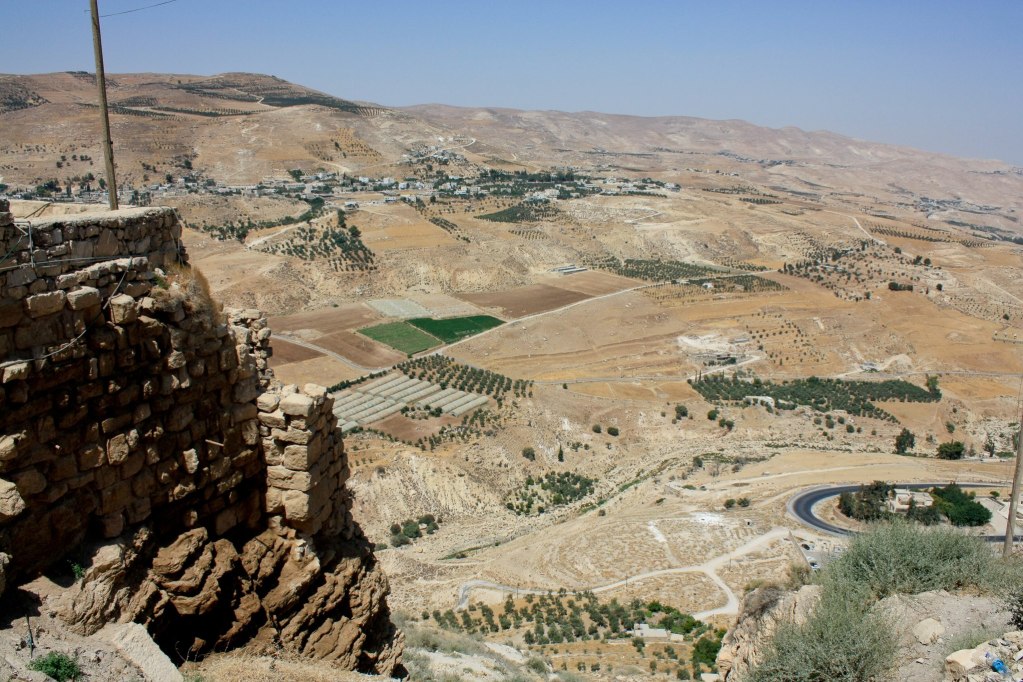 The tour stops were wonderful, but relatively light on information – I wish I could better write about the history of the places we went to – and in some cases, the names! Nevertheless, we felt that it gave us a quick but extensive glimpse through Jordan – and besides, it dropped us off at our next destination, the crown jewel of the country…