We took two daytrips to the West Bank while still based in Jerusalem.

Our first excursion first led us to Ramallah, the de facto Palestinian capital, where Bernhard and I wanted to buy a Jordanian visa in advance.  (Again, this is to avoid the Israeli stamp stigma, which affects Jordan as well: if you get a stamp from a border that Jordan and Israel share, you may also be denied entry into various countries.)  This was a quick, uncomplicated bus ride from Jerusalem.

Well, when we arrived in Ramallah (Itsuki in tow), we found the representative office closed.  It was Saturday – Shabbat in Israel, but Ramallah is primarily Christian, so it came as a surprise.  So we decided to head to the Muqatta, the complex in which Yasser Arafat (the late head of the Palestinian Authority) once resided.  Well, it was closed too.  Some soldiers at the gate turned us away, but tried to engage us in conversation as well.  “First time in Palestine?  Welcome!”  Unfortunately, their English wasn’t so great.  “You speak Arabic?”  Nope.  But the most they could tell us was that the Muqatta was closed for a month…for some reason.  But hey, they were happy to take a picture of us in front of the closed Muqatta with Itsuki’s camera…

We walked to the centre of Ramallah.  There’s not much there, but it is a lively city with a big central business district, including a “Stars & Bucks cafe” that I just had to laugh at.  Life moves at a nice, regular pace here.  I ended up buying myself a “Like a Boss” t-shirt just for kicks.  “Welcome to my country!”  Nice shopkeepers.  Given all you hear about the West Bank in the news, it was a nice surprise how trouble-less it was.  But then there’s the irony – a giant Olympics billboard advertisement: “Be a part of it!”  Well, the Palestinians can’t, not when they have no representation there as a country.  They still aren’t a country in the technical sense, but the people certainly believe they are, and they act and live like it. 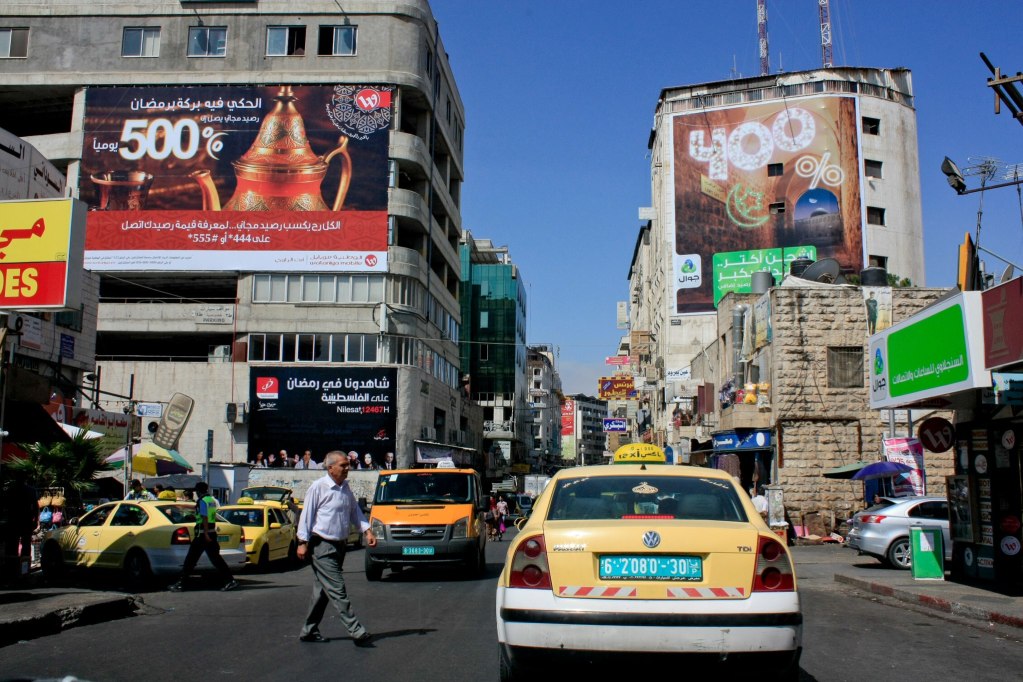 We wanted to take a direct bus or service taxi to Bethlehem, but the “direct” one (meaning avoiding checkpoints, taking 1.5 hours) wasn’t leaving for another hour.  We decided to do it the “straight” way – head to Jerusalem, then catch another bus to Bethlehem.

Ramallah and Bethlehem are both solidly part of the West Bank and are under administration of the Palestinian Authority.  (In fact, Israelis are not allowed to enter either city.)  Jerusalem is debatably part of it too, but it’s under full Israeli control.  The “most direct” road between Ramallah and Bethlehem runs through Jerusalem, and technically it takes about 30 minutes to go between them.  Except…hmm.

From Ramallah to Jerusalem, there is a checkpoint.  Palestinians have to cross this all the time if they want to get between cities.  You get out of your bus, line up in this cage that looks a little like a prison, go through a metal detector and throw your bags into the x-ray, get your passport checked, then find another bus.  It’s all under pretty heavy surveillance, and it took quite some time.  I can’t imagine doing this all the time.  As foreigners, we were just waved through at the passport control, but the Palestinians clearly had more hassle. 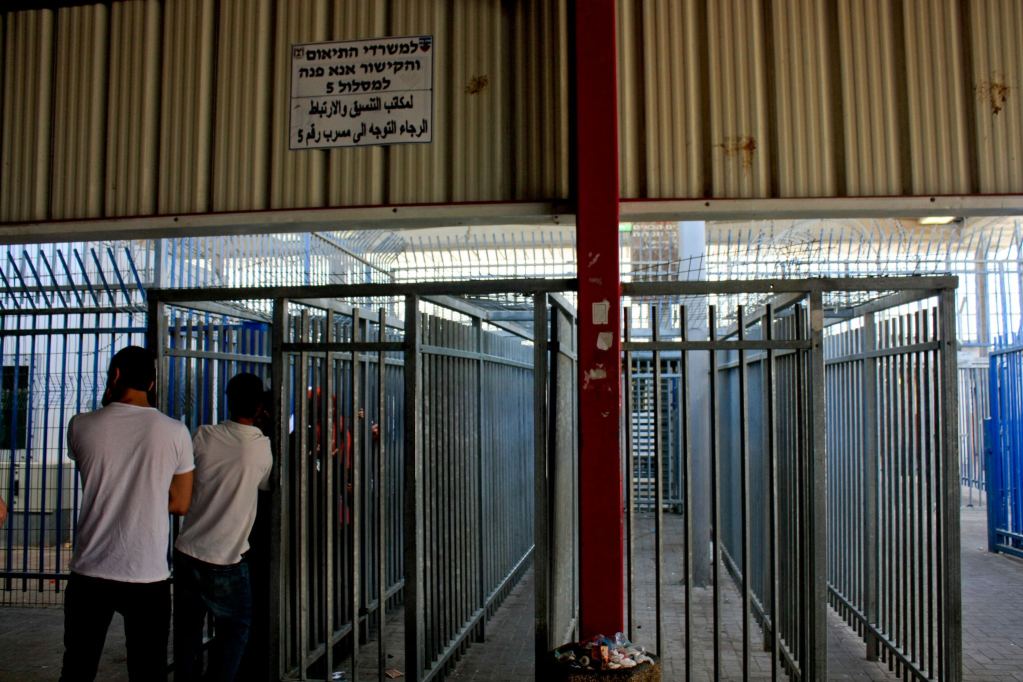 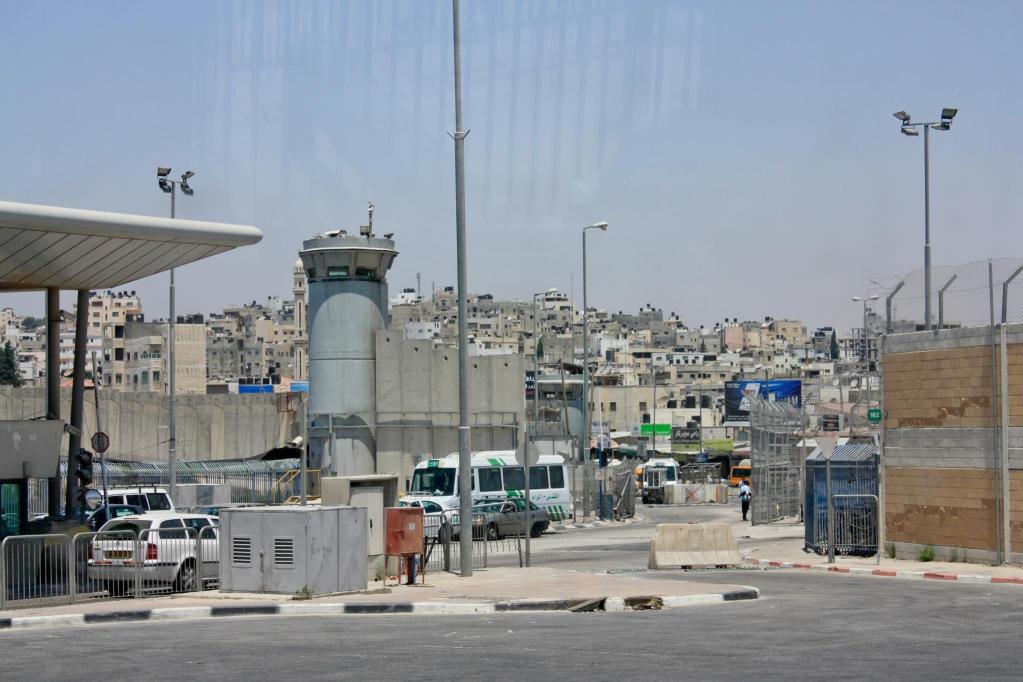 From Jerusalem, we immediately took a bus to Bethlehem.  It seems that you only get inspected at checkpoints if you’re going from the West Bank to Jerusalem, not the other way around.  We had our first quick glimpse of the Separation Wall.

The bus dropped us off sort of in the middle of the road, a few kilometres away from the centre of Bethlehem.  We were immediately approached by several taxi drivers wanting us to hire them for the day – after a bit of discussion, we obliged.  But first, some food!  Oh yeah…Ramadan.  Luckily, our driver, Mohammed, drove us to get some delicious falafel anyway, despite being Muslim himself.  He was not particularly talkative in the whole day though: when fasting, you’re not allowed to drink anything either!  In this hot weather, 40ºC or higher…wow.

Our first stop was the Shepherd’s Field, where angels purportedly appeared to the shepherds that later visited Jesus at his stable.  Purported.  Of course, there’s a church on top of the site now. 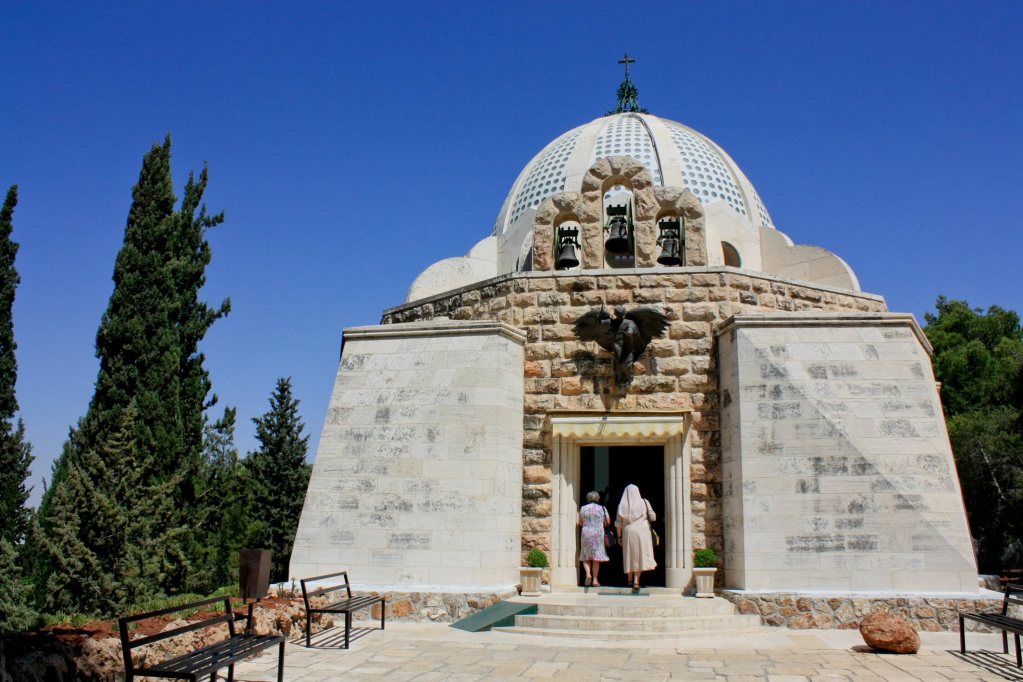 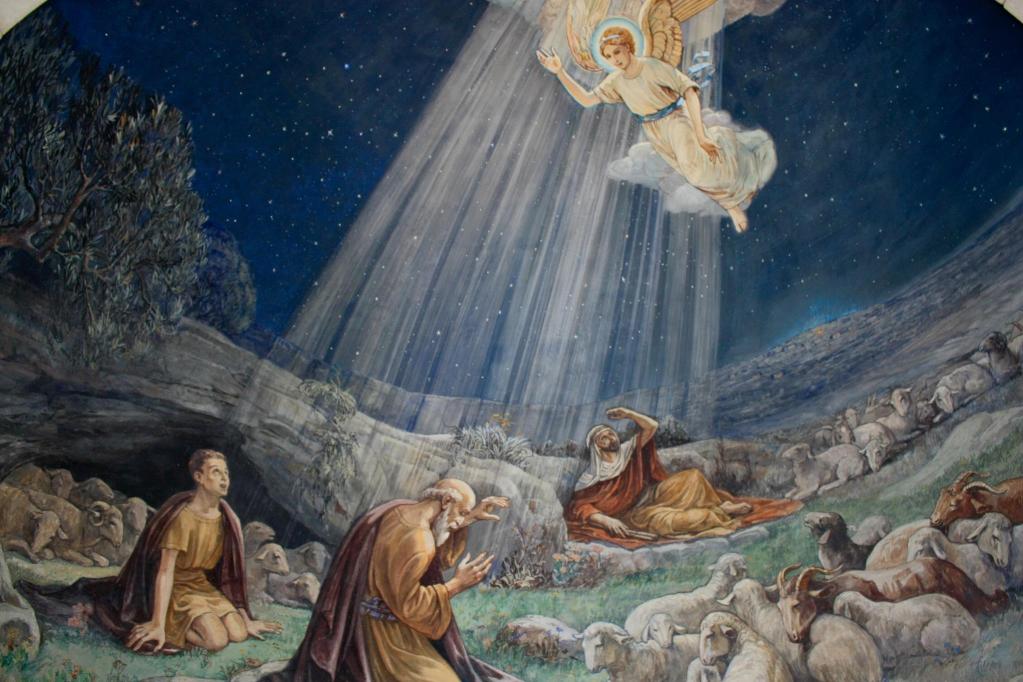 Our next stop was way out of town, at the Dar Saba monastery.  It was quite some distance away, and we passed by some incredible desert scenery.  (In the Bible, this was described as “the land of milk and honey” – really?!  It’s pretty barren…)  A big valley in front of us, Jerusalem sprawled and situated on the hills directly across.  When we finally got to the monastery though…we realised that none of us could enter, since we were all wearing shorts!  Oops!  A local kid walked us around the area instead, showing us a bedouin tent, the River Jordan, and Jordan itself in the distance.  But for a little baksheesh (tip), of course. 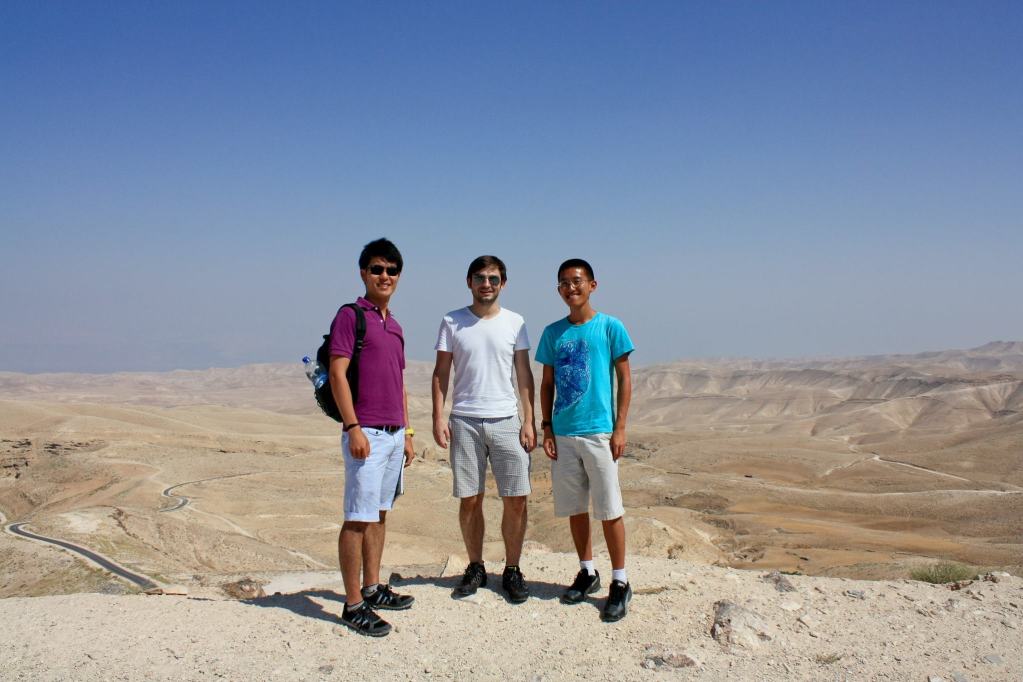 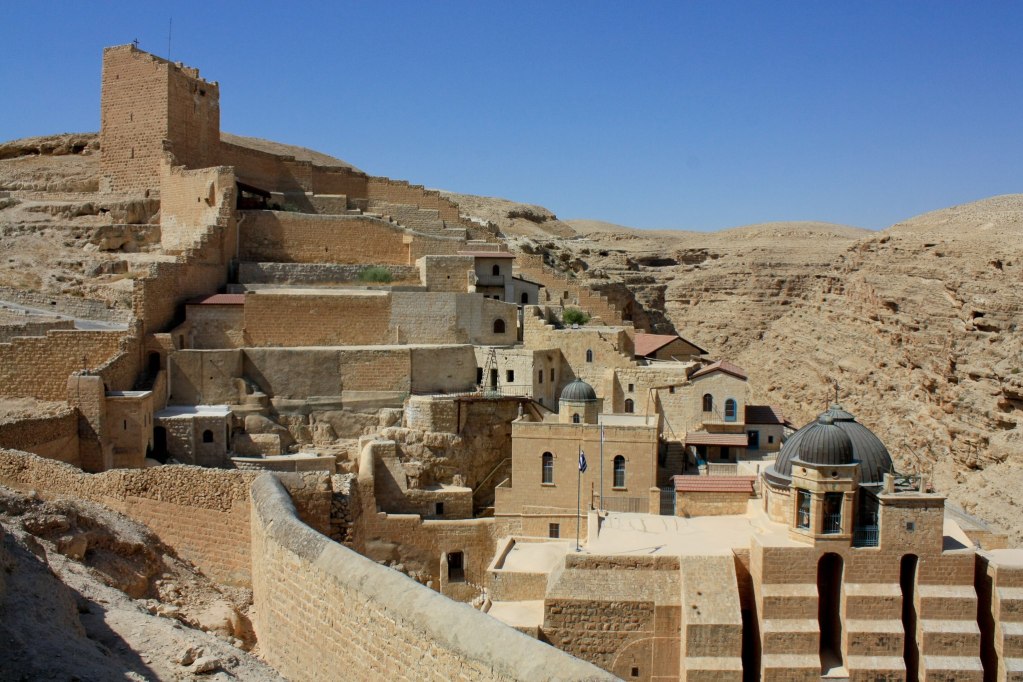 Our third stop was the Herodium, the summer palace of Herod the Great, situated in a crater.  Quite incredible, and we had the whole sight to ourselves.  Tunnels led in and around the mountain – Herod even had a pool. 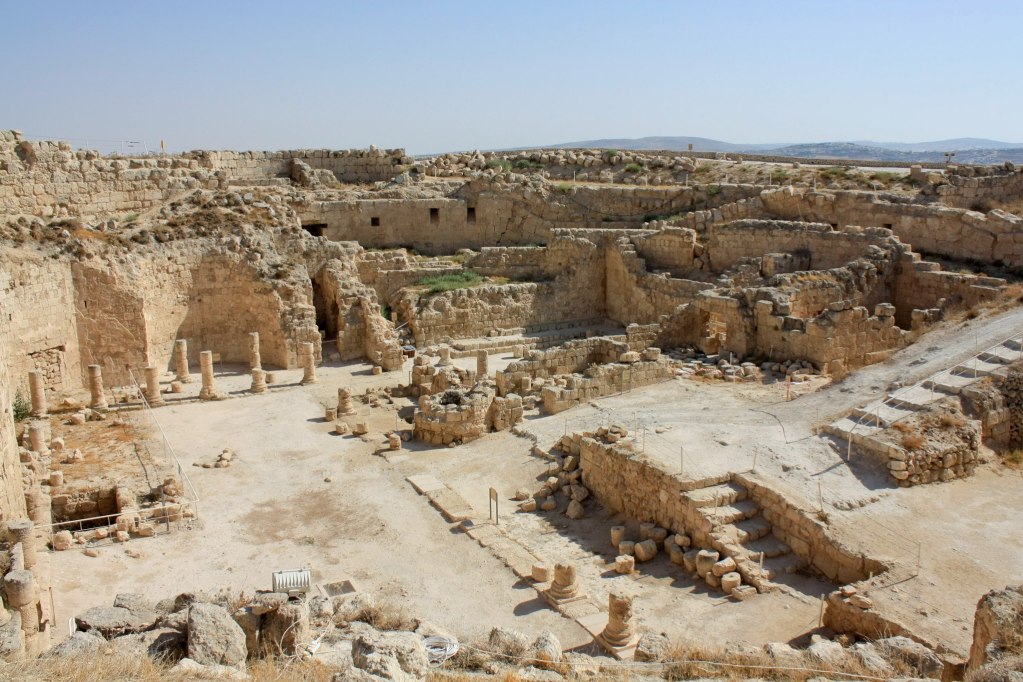 It was here that Mohammed explained to us the control situation, as we had passed a few Palestinian and Israeli checkpoints by this point.  Most of the roads in the West Bank are Israeli controlled, even if the cities are Palestinian controlled (and ban Israelis).  But then there’s also the situation of areas A, B, and C.  I think area C is under Israeli control.  But all three areas all technically constitute the West Bank.  It’s so complicated anyway, I can’t keep track.  [Edit: This gives a short description of the differences between the 3 areas.]

When we got to the Herodium though, Mohammed pointed something out that has been such a contentious world issue: Israeli settlements, illegal under international law.  Orthodox Jews come into the Israeli-occupied Palestinian Territory and simply set up shop.  (They simply believe they’re doing God’s will.)  He pointed out one particularly new settlement – in fact, he showed us a relatively new tourism brochure that featured the exact same scenery.  That one hill was barren not long ago…now there’s a settlement.  They’re still being built despite all the international condemnation.  He offered to take us to Hebron, the epicentre of the conflict nowadays (many clashes between local Palestinians and Israeli settlers), just to see the situation.  Bernhard and I wanted to, but we were out of time.  Also, Ramadan.  And Shabbat.  Heh.

We returned to Bethlehem to visit the Milk Grotto (legend says that Mary was breastfeeding Jesus, and a drop of milk dropped onto the ground, turning the red rock white) and Manger Square.  Oh, Manger Square…now giant traffic chaos.  It’s the site of the Church of the Nativity, where the stable where Jesus was born was.  Another giant, giant church and hordes of tourists.  O little town of Bethlehem?  It’s a giant, bustling city now, housing a primarily Muslim population despite its ownership of important Christian sites. 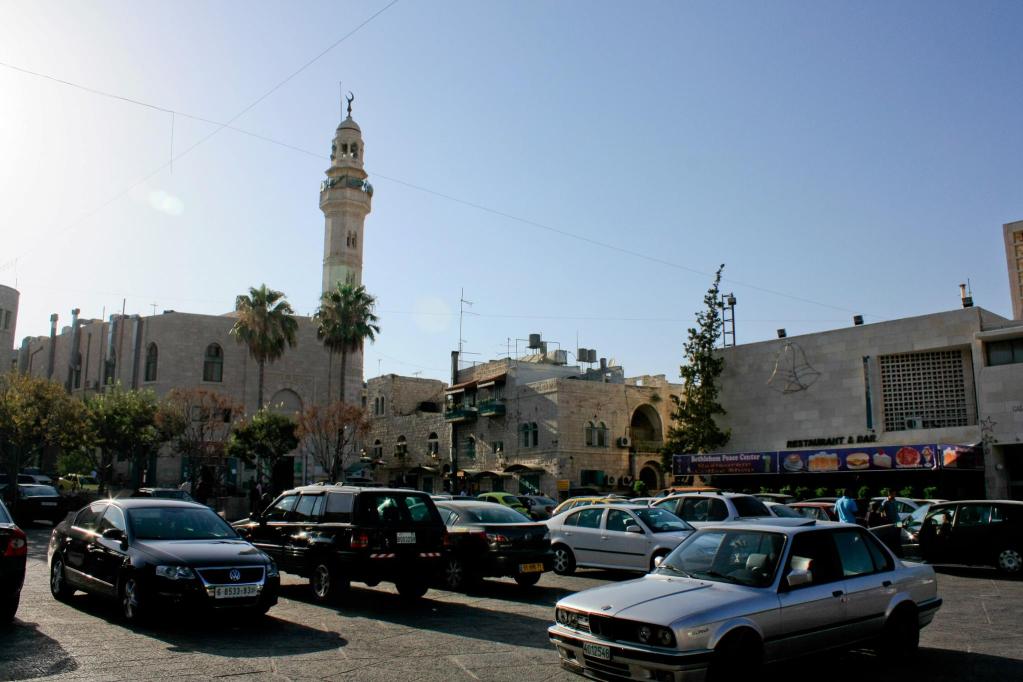 Our final stop for the day was the Separation Wall.  Graffiti everywhere.  Even the famous British graffiti artist, Banksy, has some of his stuff around (though not on the wall).  The graffiti is moving and primarily optimistic. 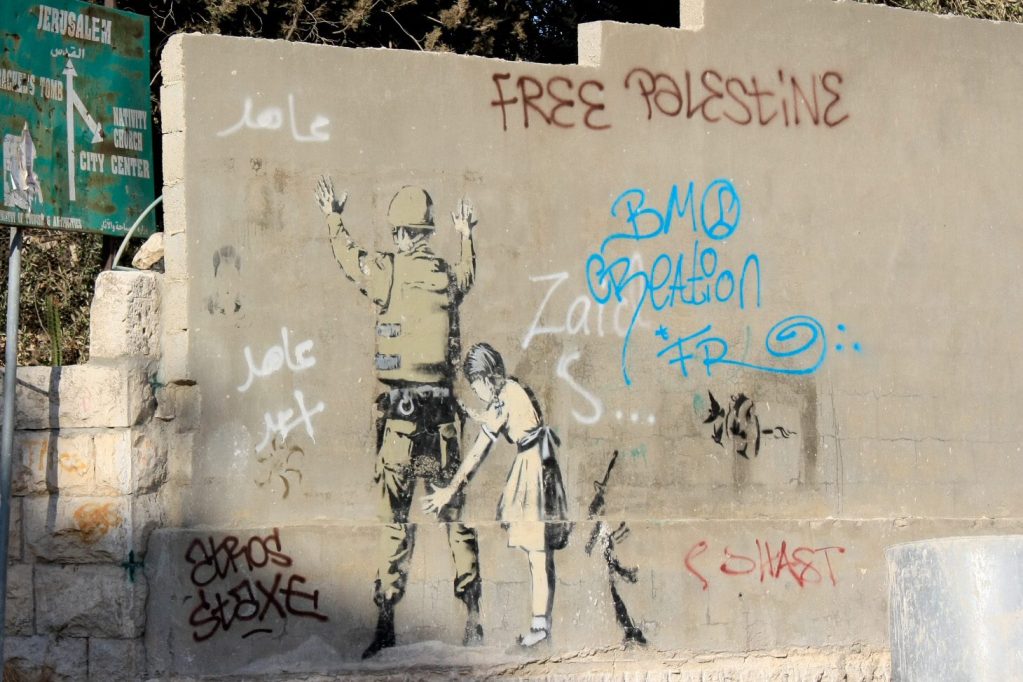 The wall was built during/after a recent period of time called the 2nd Intifada (2000-2005), when Palestinian suicide bombers repeatedly infiltrated Jerusalem and attacked.  Despite the Israeli government’s trepidation, popular reaction led to the building of the wall.  Things changed overnight – roads were cut off, people who lived on one side of the wall and had jobs on the other side no longer could work, and even some Israeli settlers found themselves isolated from the rest of their country.  We passed by one section of the wall that literally cut off a road.  It ran through what was once Bethlehem’s richest, trendiest neighbourhood – now deserted.

Mohammed used to work on in Jerusalem.  Before the wall, he used to be able to get a permit for a month at a time.  Now, he’s only allowed to get permits one day at a time – he had to apply for one just the previous month to go to the hospital.  And there are still people from the West Bank who work in Jerusalem: they line up at the wall checkpoint every morning starting at 3 am, when the checkpoint opens at 6:30.  Wow.

We returned to Jerusalem, promising to meet Mohammed again the next morning.  Notably, an easier checkpoint crossing – a soldier came on the bus and checked our passports.  Given the amount of Jerusalem tourists that want to see Bethlehem as well, not too surprising.

The next morning, we set out early again, took a bus to Bethlehem, and met Mohammed, who took us on a long drive to Kalia, a resort on the northern tip of the Dead Sea – firmly in the West Bank, but under Israeli control.  Given that we were coming from the Palestinian-controlled Bethlehem instead of directly from Israeli-controlled roads, at one point, our taxi was stopped and searched by Israeli soldiers for bombs.

At Kalia, we paid our ripoff entrance fee (50 shekels, or 10 euros) and got to float in the Dead Sea for a bit and cover ourselves in that famous mud, which was waaaay cool. 🙂  Still, the most surreal thing has to be the altitude – at 425 metres BELOW sea level, it’s the lowest place on earth that isn’t covered in ocean.  Passing the sign that said “sea level” and going further and further and further…that was strange.  My ears were popping from the pressure constantly. 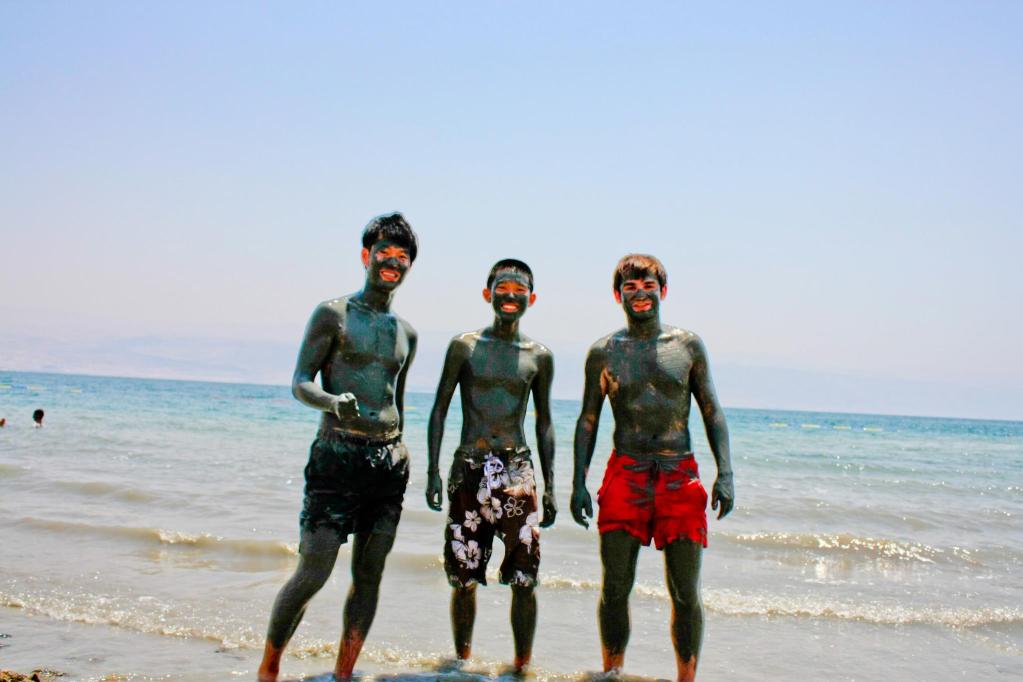 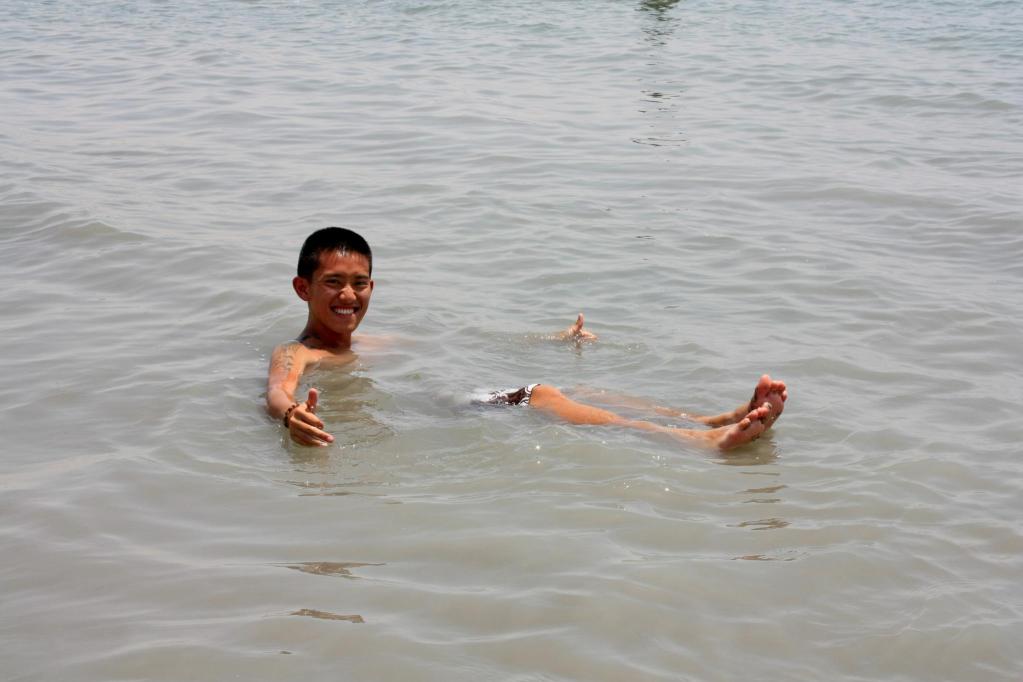 On our way back to Bethlehem, we visited the oldest city in the world – Jericho.  10000 years.  And to those that know your Bible stories, Zaccheus the tax collector – his tree still exists in the middle of town.  At least people think it’s that one tree, and science confirms that it’s over 2000 years old! 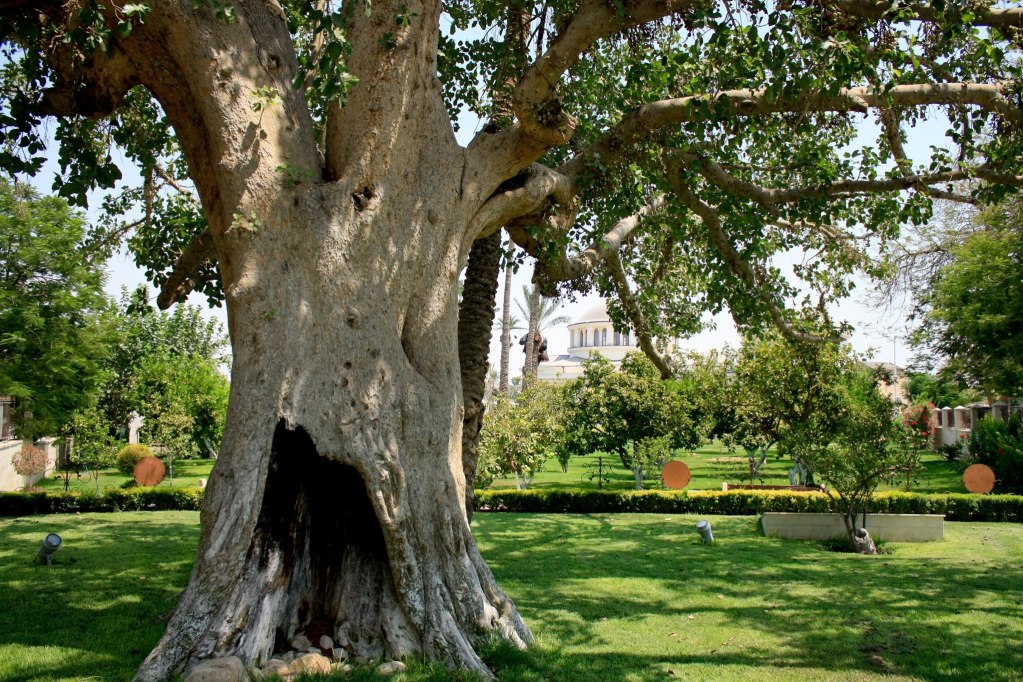 Due to a bit of misunderstanding, Mohammed dropped us off at the Separation Wall by East Jerusalem (also, we were charged a lot…).  After going through another strict checkpoint, we climbed up a big hill, and caught a bus for all of two minutes before we realised exactly how close we (and the wall) were to Jerusalem’s old town – just around the bend.  Wow. 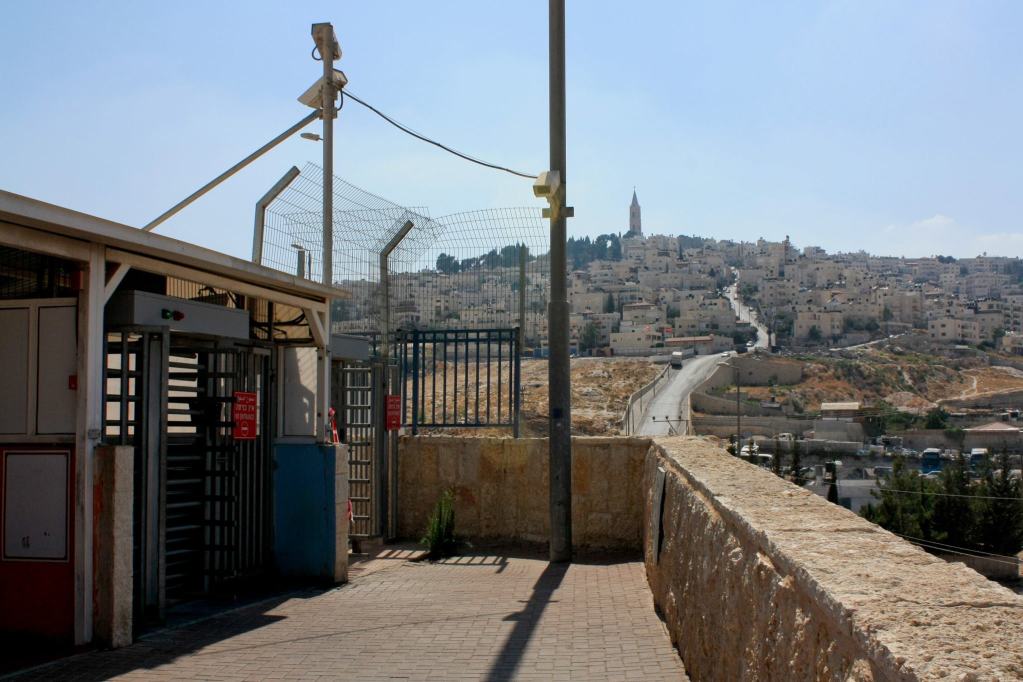 One thought on “Barriers”