Turkmenistan’s hellish bureaucracy and its uncertainty have been the source of many troubles this trip. It’s the reason why I’ve missed two weddings, why I had to stay in Uzbekistan for weeks longer than intended, why I ended up backtracking great distances to Tashkent twice, why I had to line up at 6:30 am at an embassy three times, and why I rushed through Kazakhstan. Needless to say, it’s incredibly difficult to score a visa, and indeed, it’s likely one of the most difficult places to visit in the world for that reason. All of that effort over the course of seven weeks resulted in a mere four-day transit visa (not even the usual five!) with fixed entry/exit dates and border crossings, and I was only able to apply for it after getting visas for both Uzbekistan and Iran, my origin and destination countries. Better than nothing: many people I met were rejected for no reason, time and effort wasted, trip plans forced to change.

Rather than being brusque and abrupt like their bureaucracy, Turkmen people are very warm (at least if they speak Russian and then realise you can understand at least a little), and that even includes all the staff and soldiers I dealt with at the very time-consuming border, some of whom were more eager to chat than search through my belongings. Crossing the border on foot without my own transport, I was nearly immediately picked up for a free ride 15 km to the share taxi station in Konye-Urgench, and a fellow passenger even invited me to his home the next time I’d be around, audibly and visibly dismayed that I only had four days. (Sadly, with the way things are, it’s not likely I can ever come back…) Other than the people at the border and those working in hotels, locals seem oblivious to how difficult it is for foreigners to get in and for how long they can stay.

Unfortunately, I went against the advice of a nice soldier at the border, who gave me a pretty blatant “hint” about the money situation. While Turkmenistan has an official pegged exchange rate of 3.50 manat to US$1, there seems to be a black market rate somewhere between 6 and 7, far less open and “more” illegal than the one in Uzbekistan. The man who picked me up at the border tried to drive around asking people surreptitiously to exchange money with me, to no avail. All I could get was the bank rate, which hurts in a country as expensive as this one. (Not to mention I can’t use ATMs or credit cards in this country or the next, so cash is tight!)

More egregiously, I vastly overestimated the time I needed to reach Darvaza, completely skipping the UNESCO-designated mosque/mausoleum complex in Konye-Urgench, which the soldier also suggested I visit. While also Khorezm in style, they’re far older than those in Khiva and in a heavier state of ruin, dating back around a thousand years, which fellow passenger Davranbek told me as he implored me to take a photo of him. Our share taxi briefly stopped outside one of the mosques in the complex, and the rest of the passengers said a quick Islamic prayer before we headed off.

Off to where? Hell, of course!

The only picture I took in Konye-Urgench

Well, the other passengers were heading to Ashgabat. After a seemingly-endless journey passing nothing but sand on a terrible road (with the only interruption in terribleness a sudden, highly modern bridge that appeared out of nowhere, then ended back to terrible), I just alighted at the no-longer-a-town (the government demolished it 12 years ago) rest stop of Darvaza about halfway down, settling down at the chaikhana (tea shop) the driver picked out of the maybe eight scattered over several kilometres in the area. 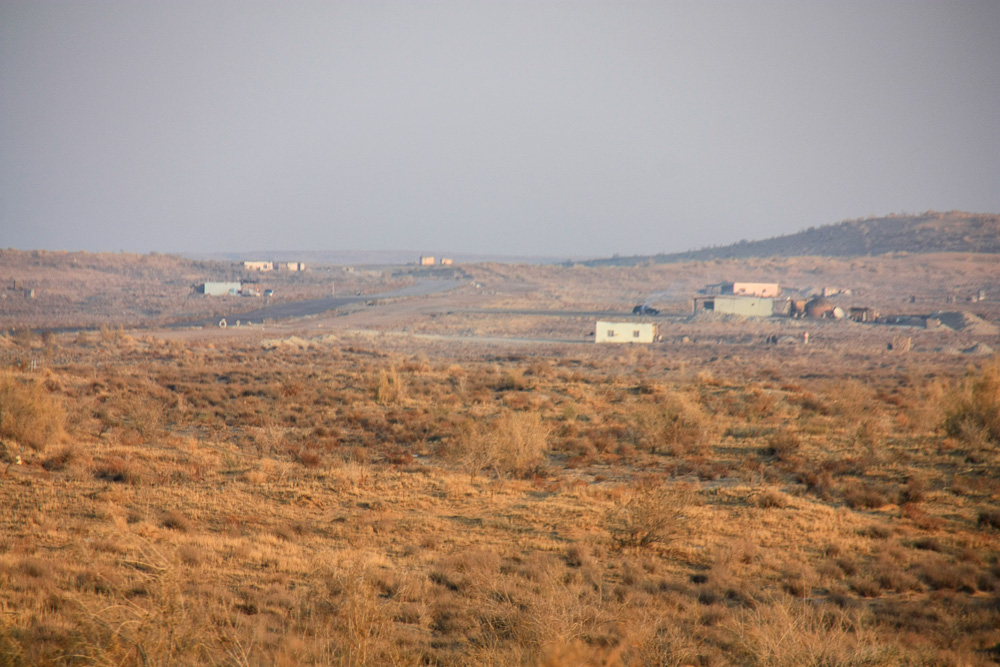 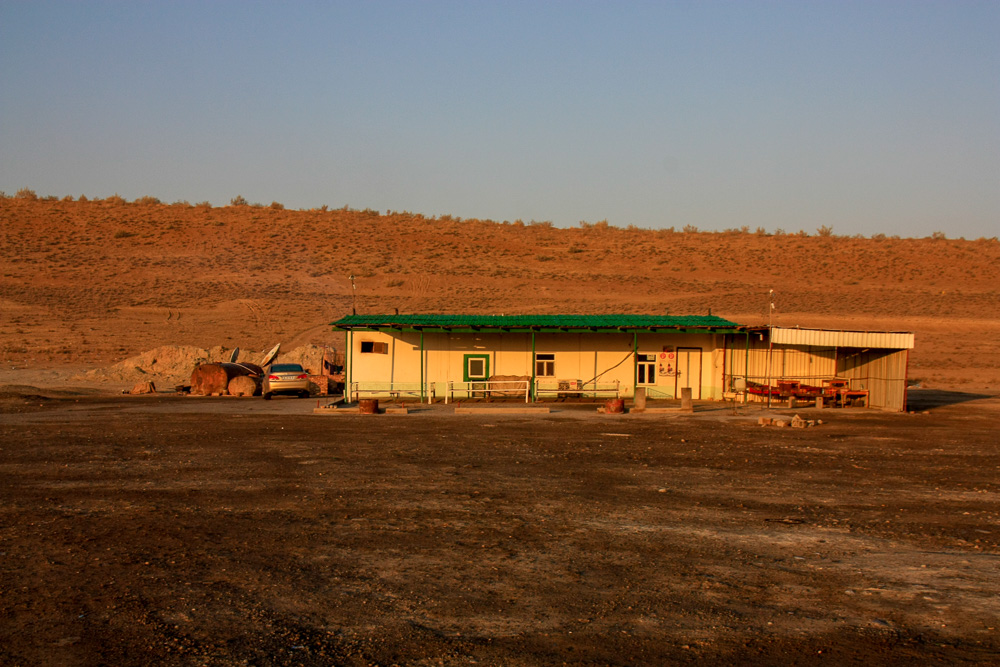 Likely accustomed to other transiting backpackers doing the same, the owner let me stay for the night. Considering I arrived at 4 pm, that meant sitting at the shop watching satellite Turkish music videos and dramas (not Turkmen TV; given how strange their TV channels are, it’s not surprising that locals prefer something foreign), playing with the owner’s kids, talking to some of the many people passing through, and even being invited for shots of vodka on more than one occasion (and I turned down all but the first). It’s kind of hilarious to see them take shots then do an Islamic end-of-meal prayer. 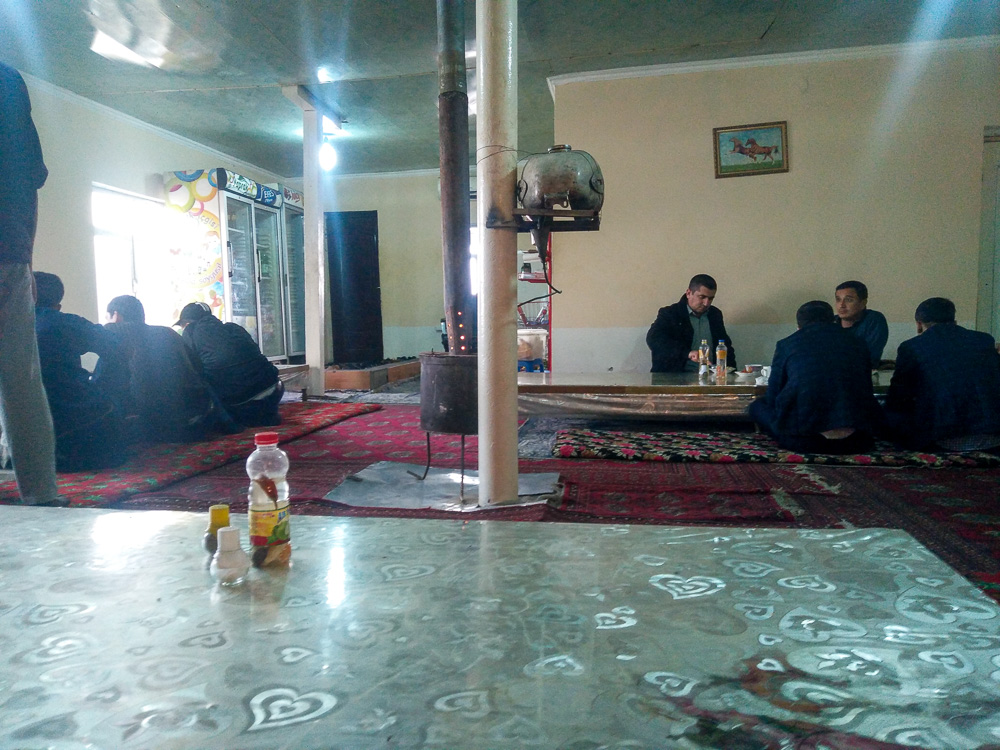 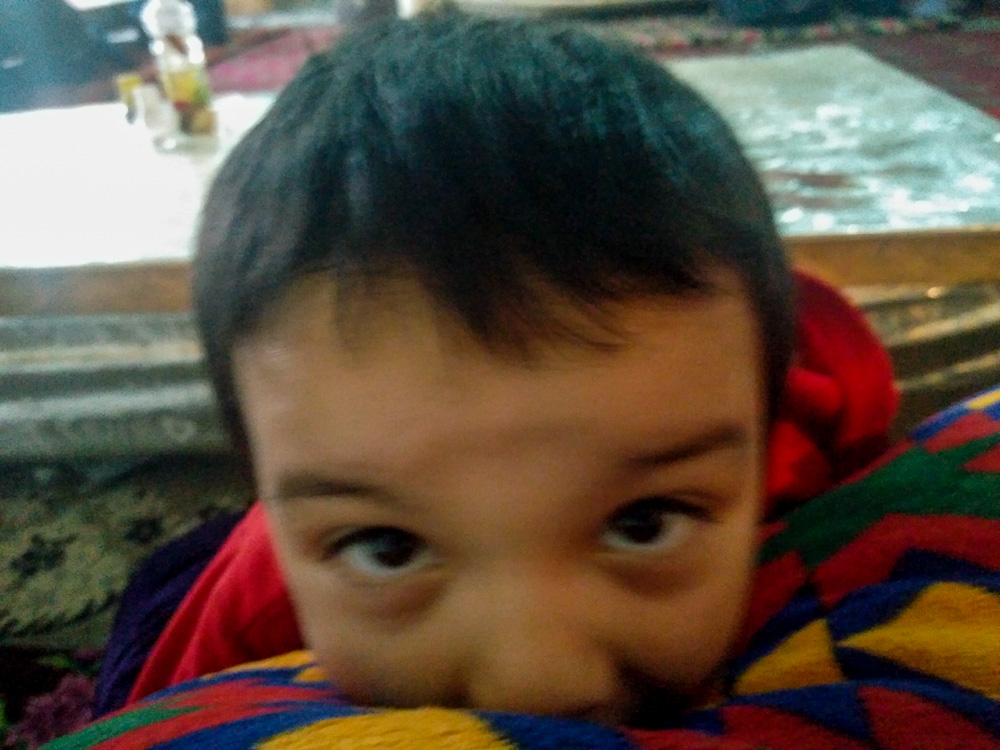 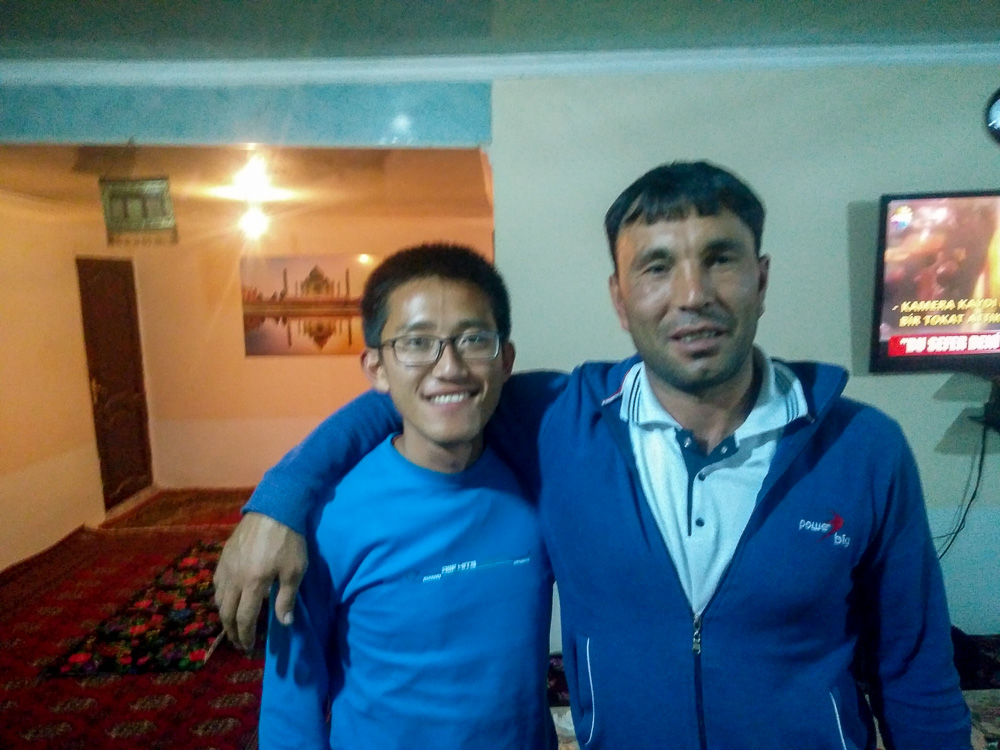 All of that was to take my mind off of something I had been dreading for quite some time, but knew I wanted — needed — to do: the cold, late night walk in the desert. (Well, a very overpriced motorbike ride was also an option, but I’m short on cash, remember?) I was reassured previously by multiple travellers, and also that night by the chaikhana owner, that it was more than doable, which calmed my nerves a bit.

After a surprisingly warm sleep in the chaikhana, I set off alone at 4:15 am, heading directly east towards a dull orange glow illuminating the already Milky Way-filled sky. With nothing but my cell phone as light and occasional GPS, I have to admit that the 5 km walk was somewhat scary, at least for me. While I already did something similar earlier this year, this time I was alone. I jumped at any shadow or sudden sound, afraid of animals that weren’t there, and tripped a bunch as I climbed up and down the very steeply-set train tracks.

Most of the journey being flat otherwise, I got into a groove quickly, and it wasn’t quite as difficult or scary as I had imagined. Finally, after a little over an hour, the dim glow revealed itself to be a gaping hole in the ground, spewing fire. Darvaza means “door” in a variety of languages. Naturally… this is a door to hell. 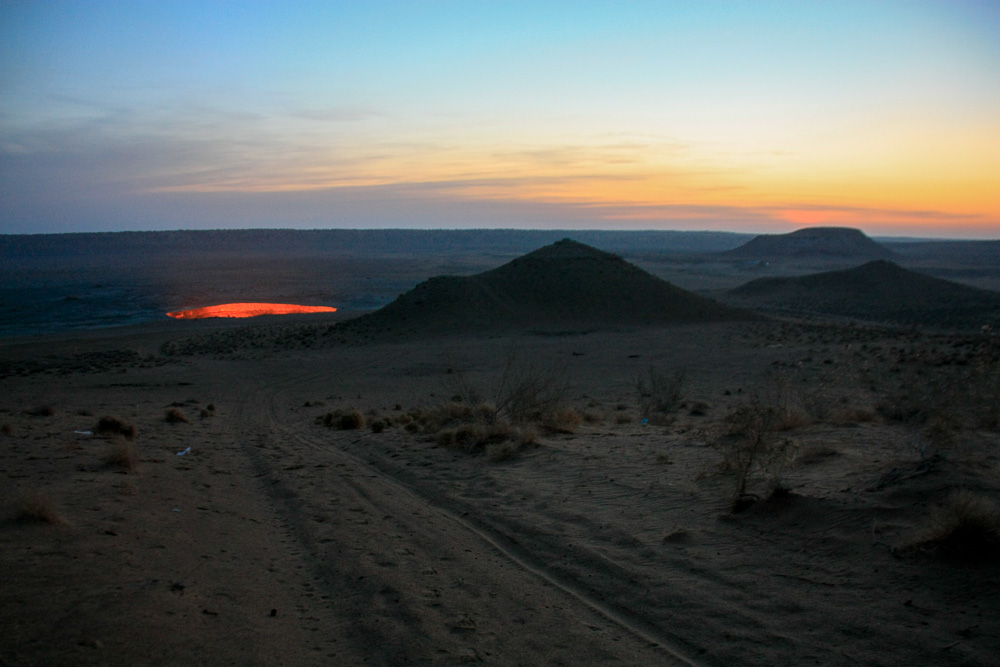 Imagine following this, but in the dark!

Well, the real story dates back to the Soviet years. While exploring the area for gas in 1971, their rig collapsed into this giant crater that formed, spewing out a ton of methane. Seeking to just burn it out, as the fumes unabated would harm the population, a flaming tire was rolled in. Rather than extinguishing, the crater has been burning nonstop ever since, and it’s been 45 years already! That fire is roaring as ever, even though there have been persistent rumours that the Turkmenistan government wants to put it out and restart gas exploration. There are two boiling mud craters also in the area that I didn’t find. 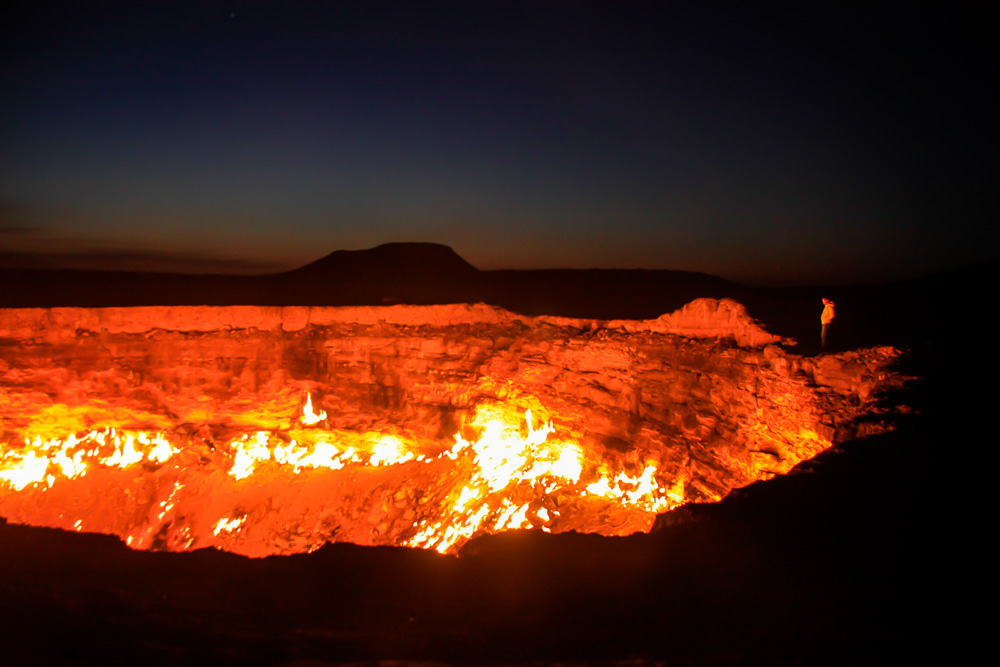 Even my first sight of the crater gave me the chills. It really does look hellish, and given my already jittery, semi-lucid state, part of me was bracing for something creepy or demonic to jump out. (Hey, it’s Halloween after all.) But the jitters turned into complete awe, and I quickly drew nearer, not just for the sight, but to get some warmth. I occasionally turned away when the gas fumes or heat blew a little too strongly. 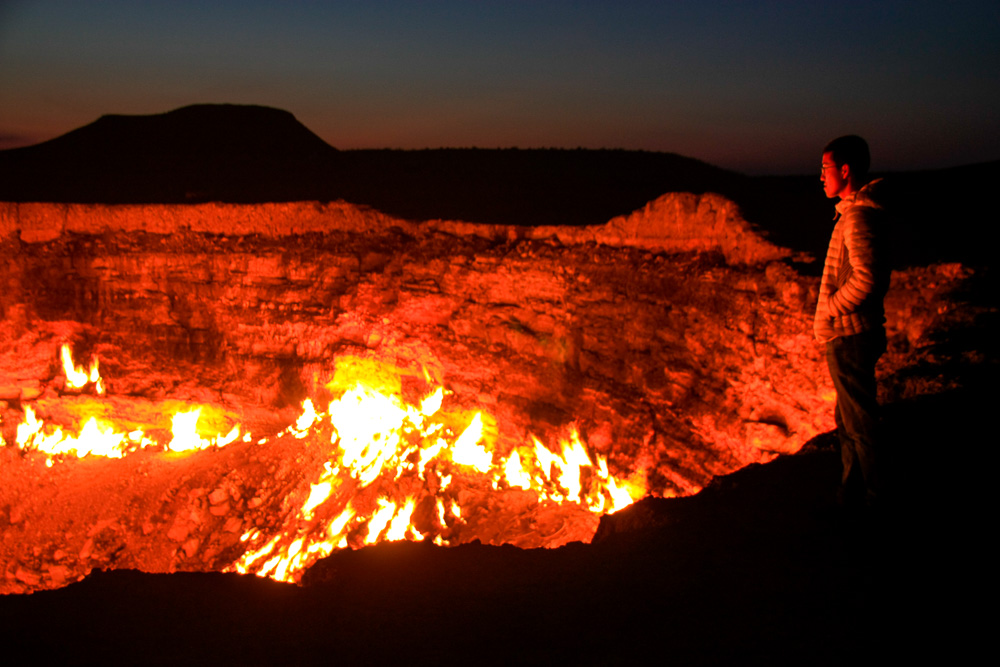 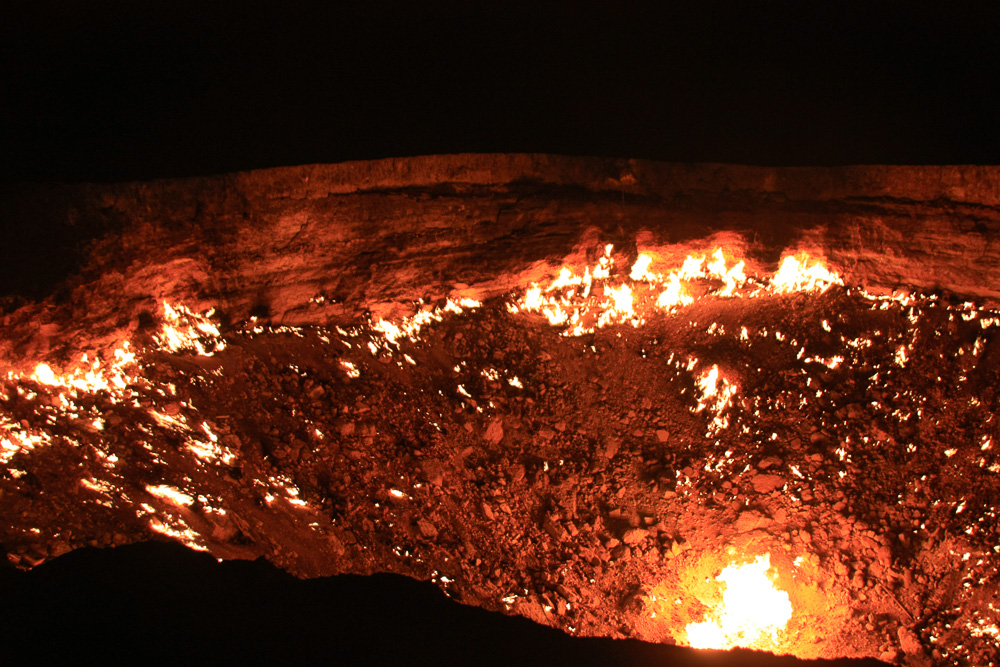 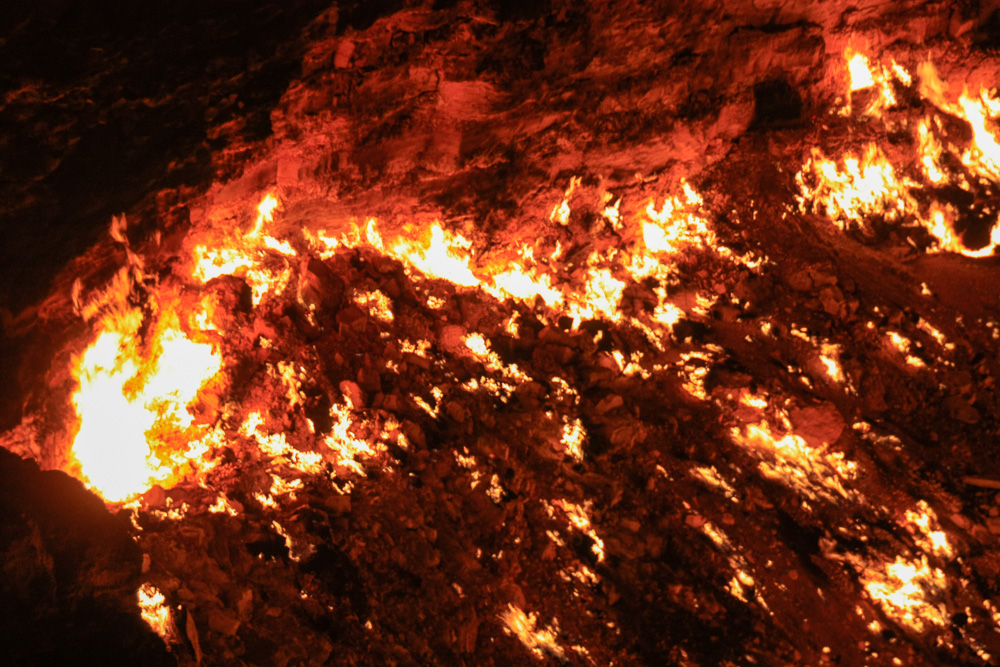 The fire crackles like it’s the world’s largest campfire. Insects drawn to the light also draw birds, who stand on the crater’s edge and are swooped high up by the rising heat as soon as they take off. Desert winds gently blow from where I stand towards the crater, yet the overwhelming heat blows the other way, causing the occasional swirling mini dust tornado. It’s an incredible experience to take in, and despite the side of me not facing the crater being cold, I hung around for a little over an hour and a half, completely alone, waiting for the sunrise. 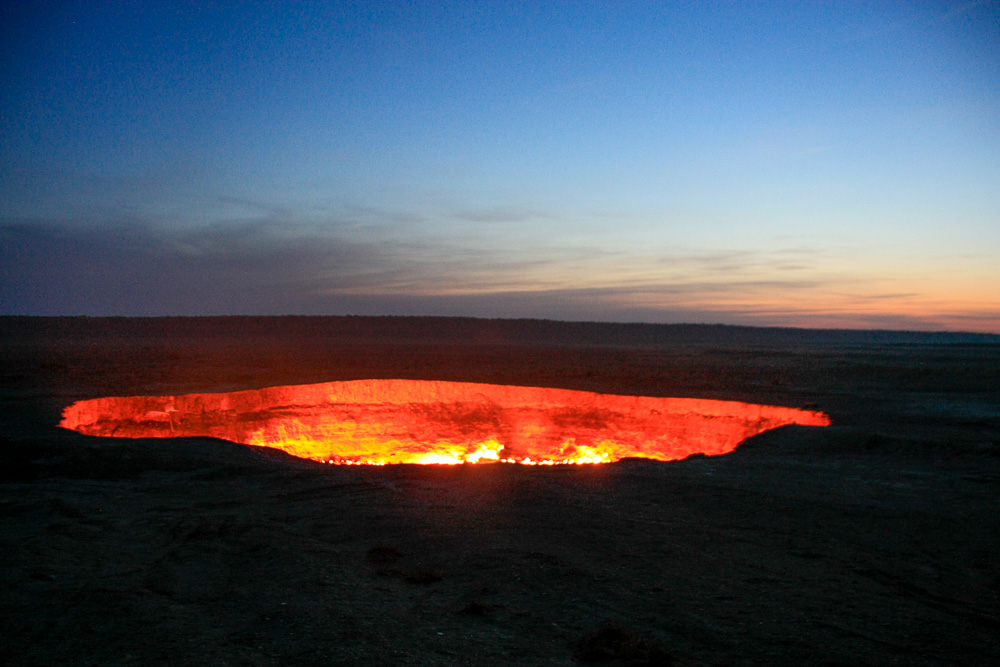 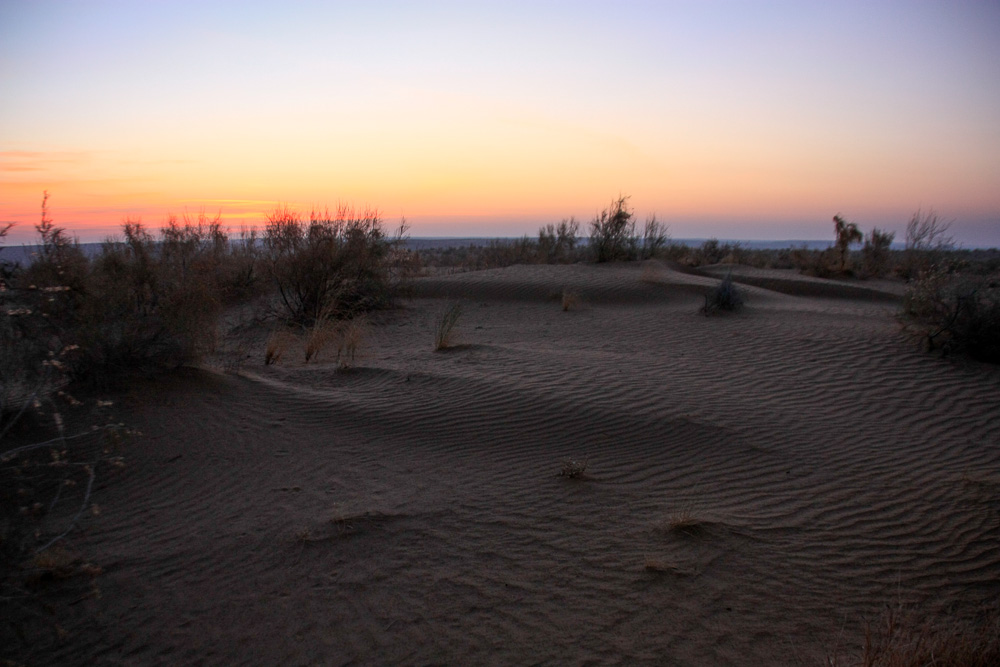 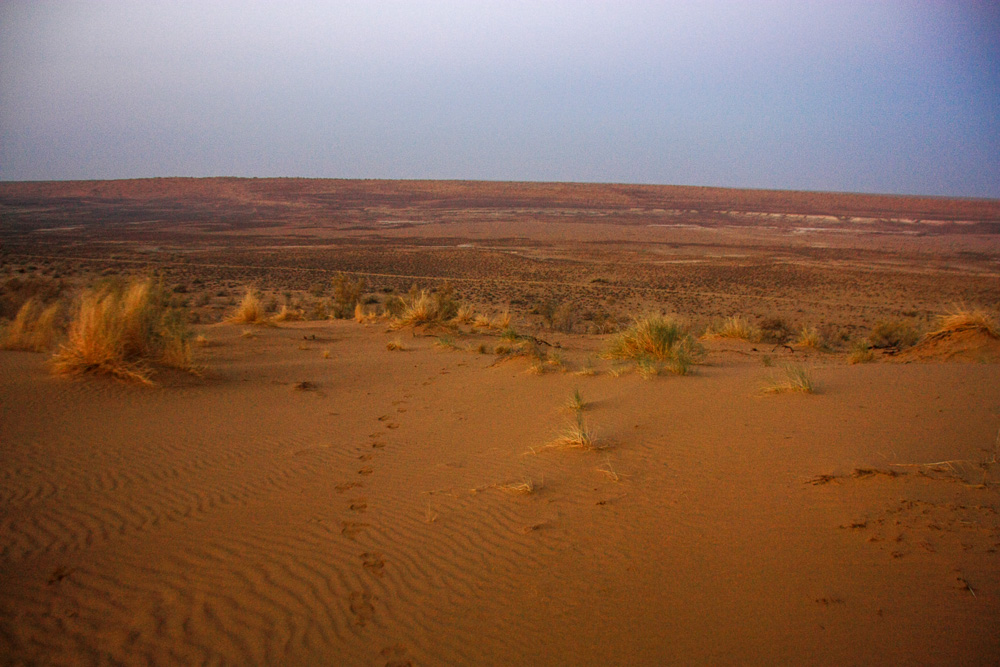 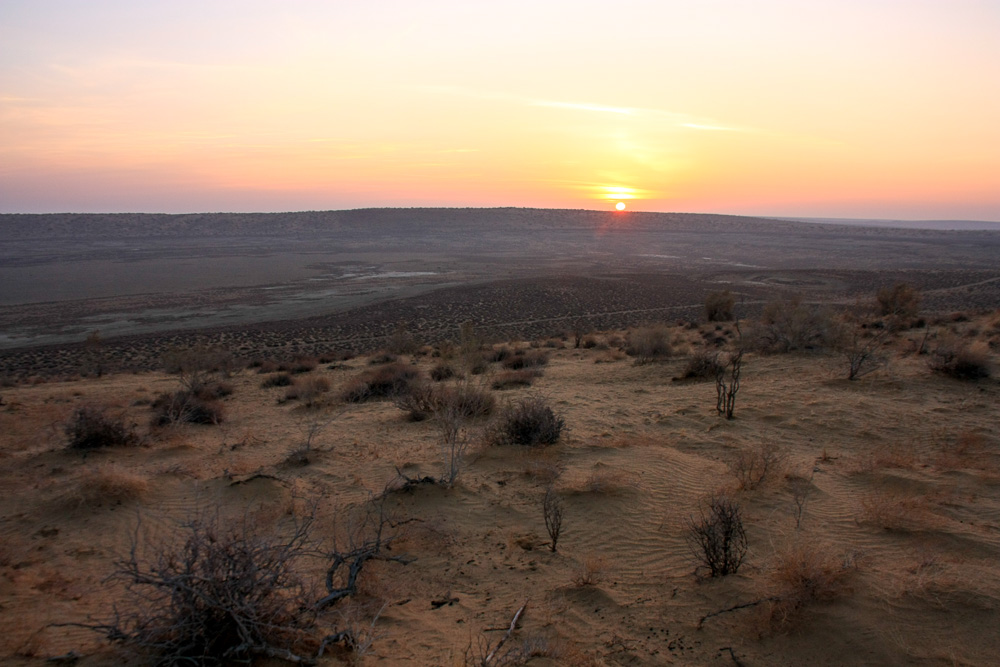 The walk back to the road was a bit more difficult, despite having daylight: there’s no orange glow to guide me to the chaikhana. I was surprised to find some of my footprints from my journey there, and followed some of them back, using my GPS for the rest. When I finally reached the chaikhana at 8:30 am, greeting the just-woken patrons, I gotta admit… felt a bit like a boss! 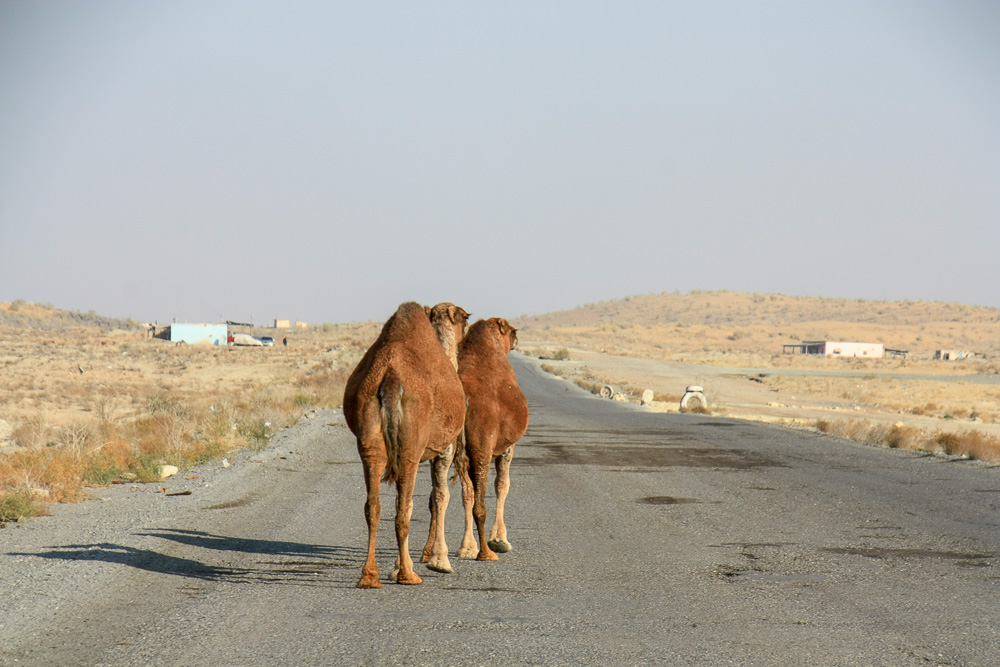 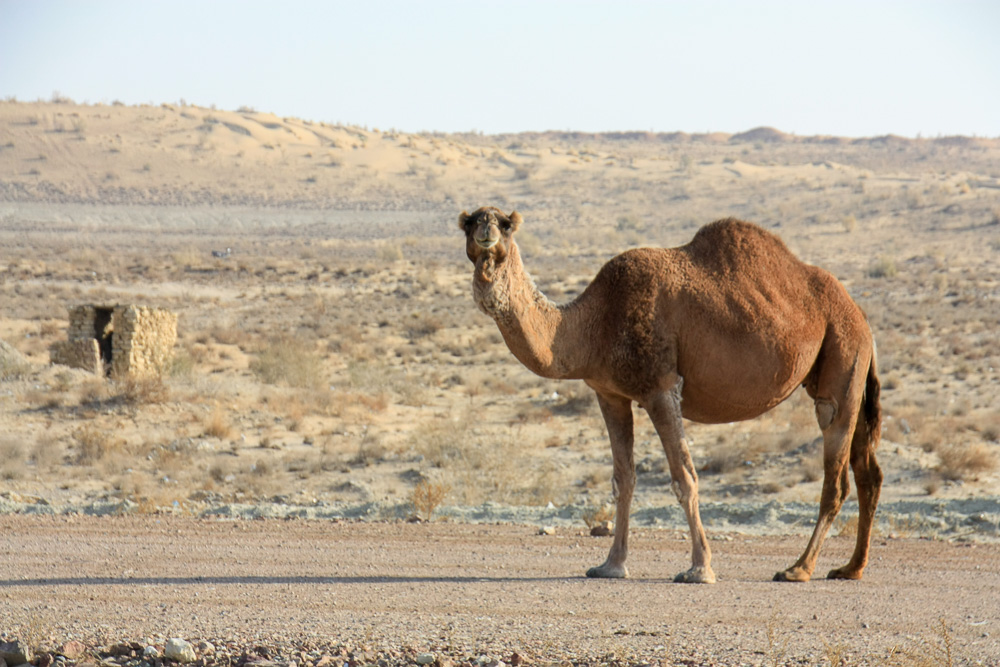 Unable to find a passing vehicle towards Ashgabat willing to stop (there aren’t many so early in the day, especially since the nearest significant settlement is actually Konye-Urgench, five hours away by car!), I walked several more kilometres past some derpy camels to the chaikhana where the once-daily bus passes… and just made it. Onwards to Ashgabat, four hours away, standing room only!

One thought on “Hell”