The Republic of Karakalpakstan isn’t its own country, and of the various large subtractions and additions of territories to Uzbekistan done by the Soviet regime, this one is a bit of an odd fit. Karakalpaks look and sound far more like Kazakhs (that is, more Mongoloid) than Uzbeks, yet they belong to neither group — and even then, they only make up a third of the population of the republic, dwarfed by the number of Uzbeks and even maybe Kazakhs. And even if you consider the entire population of Karakalpakstan, regardless of ethnicity, it only forms 3% of Uzbekistan’s population, yet nearly half of its land mass.

Their own distinct culture, formerly nomadic, is on display at the Karakalpakstan Museum in the republican capital of Nukus, where Alexa, Cesar, and I stayed for both nights we were in the area. Again, their yurts, jewellery, and dress suggest relations far closer to Kazakhs than Uzbeks. More interestingly though, this museum used to be named after the late Igor Savitsky, who moved here from Russia and amassed a collection of banned works during the Soviet era, when paintings of anything *but* realism, people with full bellies, and a “celebratory” mood were not allowed. At over 90,000 pieces, his is the second-largest Soviet art collection in the world (and sadly only a tiny fraction of which was on display) outside of Russia, and while seeing some abstract paintings drawn in cubist or surrealist styles might not sound so interesting, reading about the state of mind of the painters brought it into context. One painting of a dumpling, sadly not displayed, was rendered so plump and juicy… because the artist had been stuck in a gulag, so hungry that he painted what he wanted to eat. While I couldn’t take any pictures inside, it was well worth the visit, and I wish I had opted for a guide to hear more stories.

But what brings me to this area is what’s killed a primary mainstay of Karakalpak culture, their tradition of fishing. The town of Moynaq, 200 km north of Nukus, used to be a port city on the shores of the Aral Sea. It’s now 300 km from the water: the sea is disappearing. You’d have to scroll pretty far north on the map above just to find it! 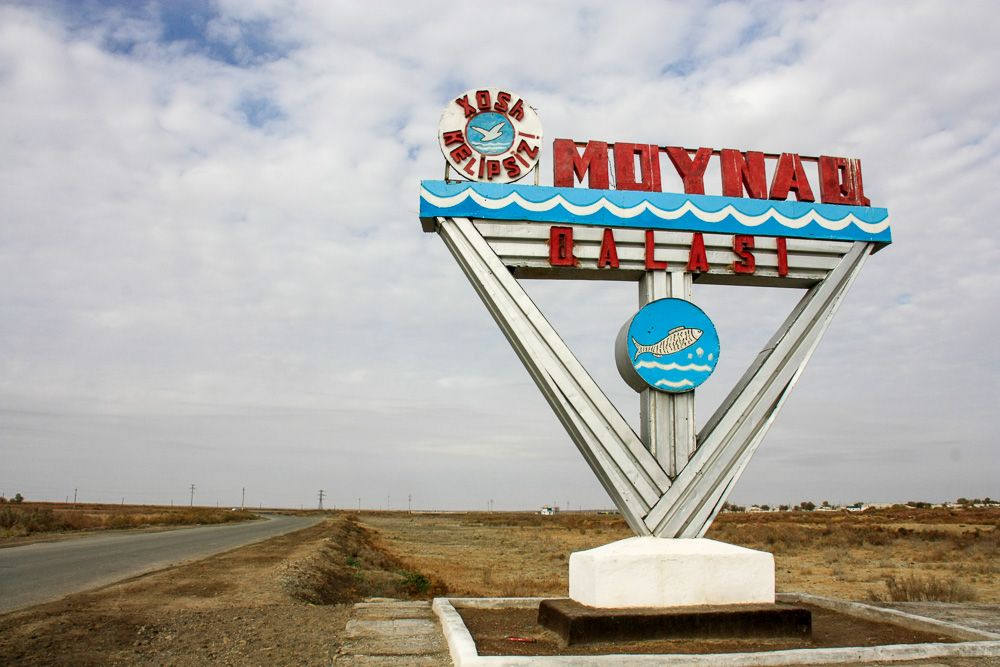 The Aral Sea used to rival Lake Superior in size, as one of the largest in the world, and home to not just a fishing industry, but beaches and a passenger ferry. As a helpful sign in Moynaq explains, it’s gone from roughly 66,100 sq km and 1064 cubic km in 1960 to less than 12,100 sq km and 110 cubic km in 2010 — it’s lost 90% of its water. What remains is so extremely salty that it can’t sustain any fish; the industry died in 1984. Instead, should you decide to go out that far to the remaining water, you’ll find something so saline that you can float on it like the Dead Sea. 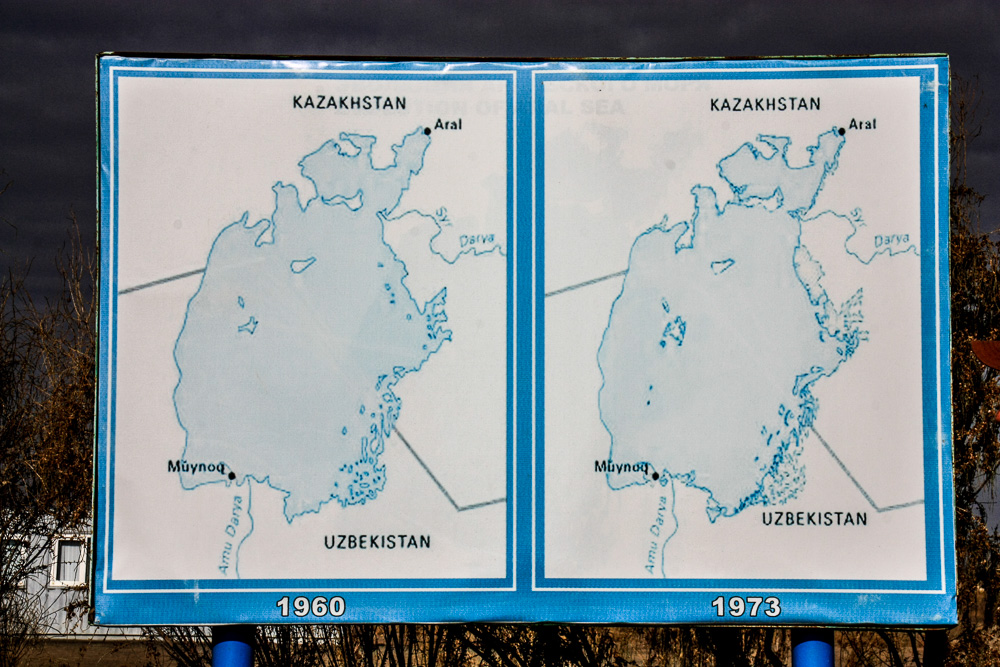 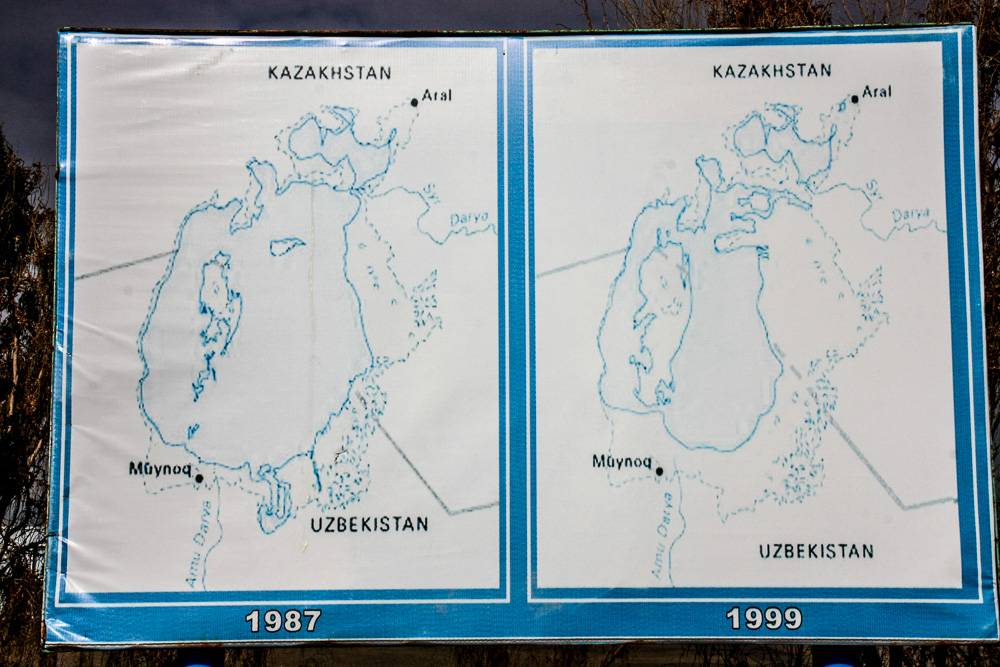 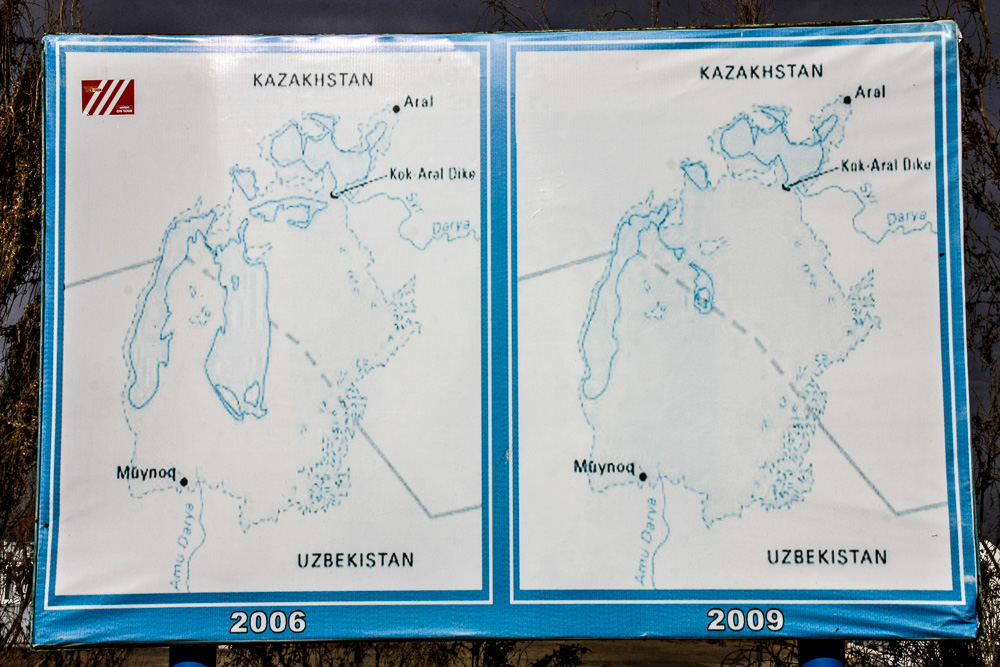 What the sign didn’t say is why this is happening.

Of course, it’s got to do with what’s now the largest industry in Uzbekistan: cotton. In the Soviet times, in order to boost production, water was drawn up from the Aral Sea, irrigating desert lands not naturally suited to growing anything. They basically went way too far. The Aral Sea used to be fed by the Amu Darya from the south and the Syr Darya in the north. Now, the sea has dried up so much that it’s actually split into two, with the southern portion in Uzbekistan and the northern one in Kazakhstan. Kazakhstan built a dam that split it permanently, attempting to save their portion, which has actually begun to grow again, seeing a newly burgeoning fishing industry. Meanwhile… the Uzbek side continues to dry, and will likely dry out completely in a few years. The water is too salty to do anything with.

Now that the flat sea bed is exposed to the elements, it’s also changed the weather in the area: winds pick up salt and sand, creating dust storms. There aren’t any trees in the area either to block them, nor water to sustain anything but the brush that’s now grown in place of the sea bed. Worse, those storms pick up more, like industrial chemicals and stuff from a defunct biological weapons testing area, and all of this affects the health of the population. Ironically, this population now no longer works in fishing, but in what killed that industry: cotton harvest.

From the site of the former port in Moynaq, you can see… nothing. Sand as far as the eye can see. But more tellingly, it’s set on what looks like a cliff face. That used to be where the water went up to. 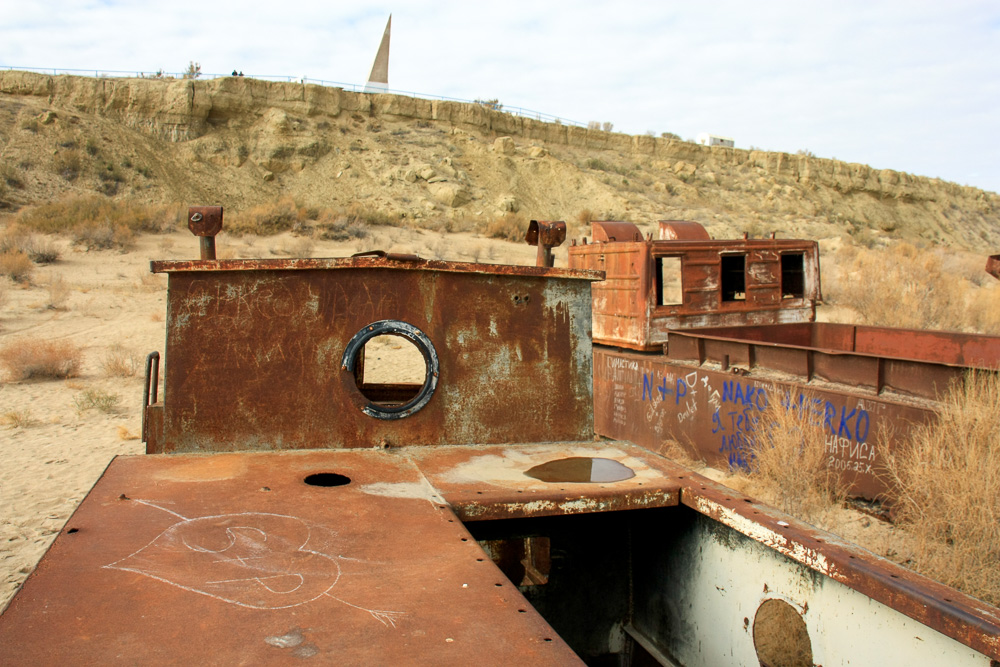 All that’s left are rusted, broken ships that their owners decided to abandon. They litter the former sea, depending on where they were moored when the water receded, but some have been brought to a memorial site, which we visited. We climbed up the ships, now covered in graffiti, careful not to fall into the many holes. 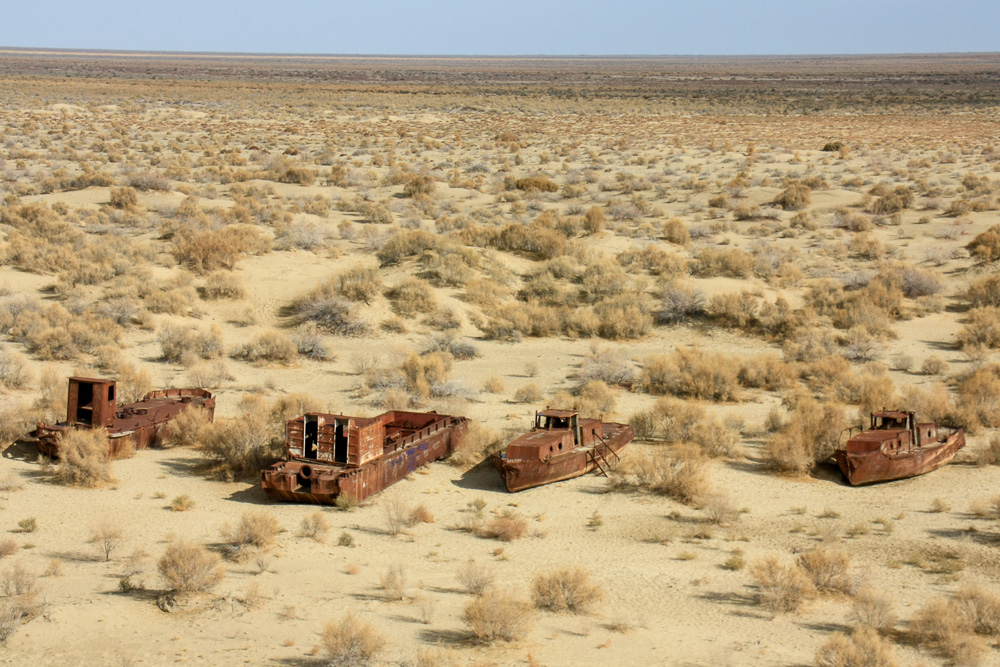 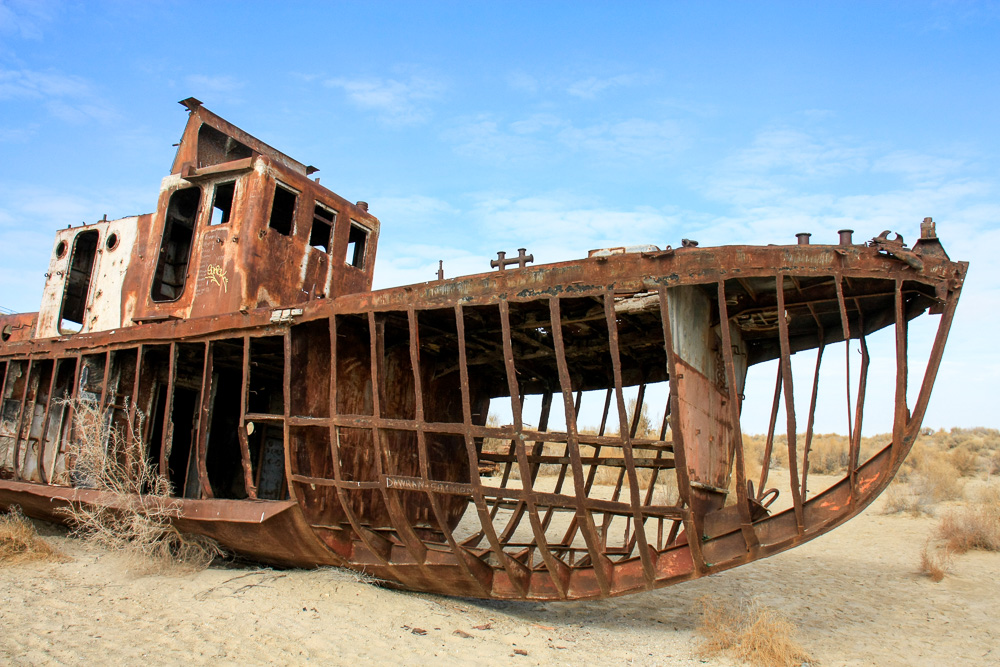 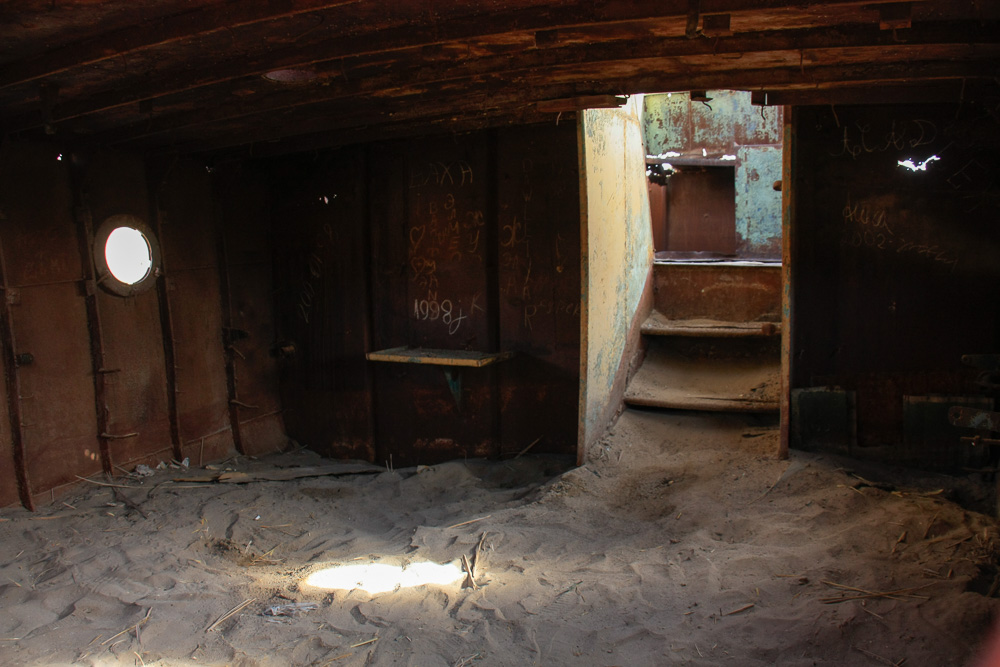 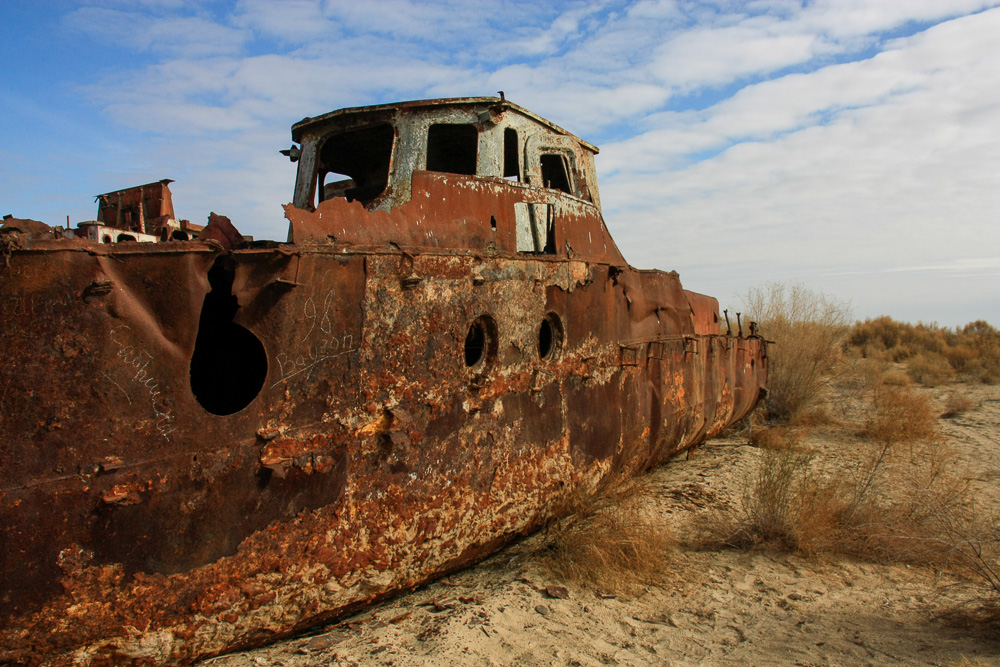 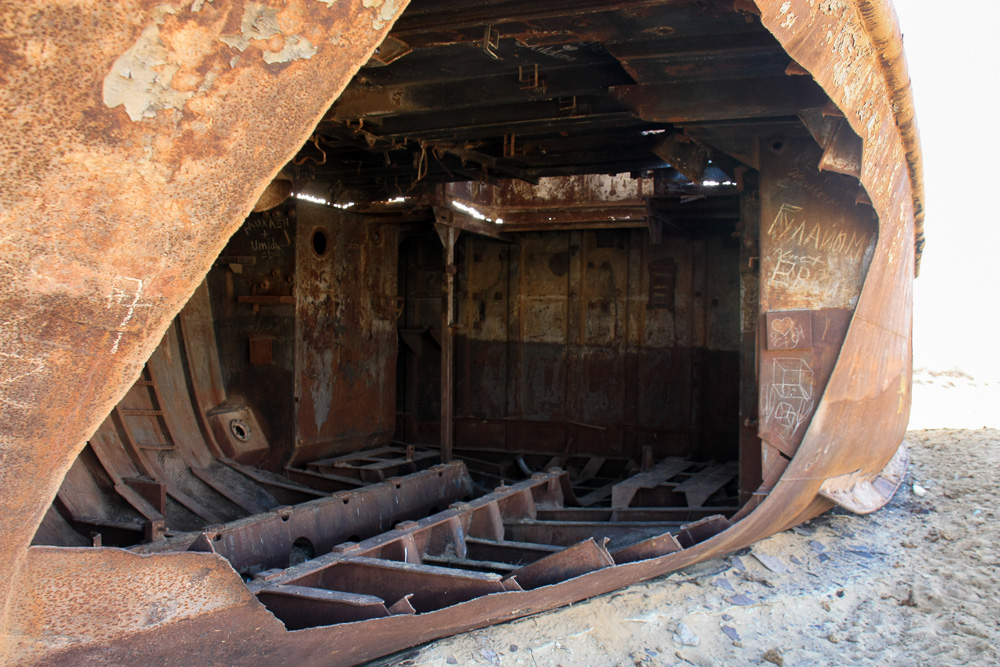 To add to the surrealness of it all, we noticed that the bone-dry sand the ships are resting on are covered in seashells. Now, cows and camels wander without a care, taking shade behind the ships. 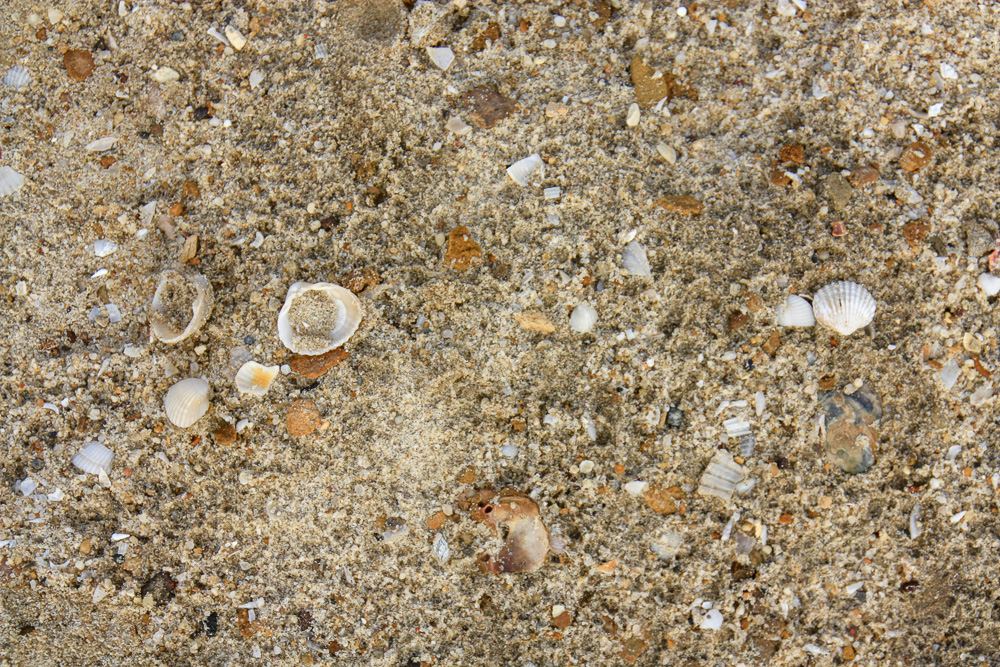 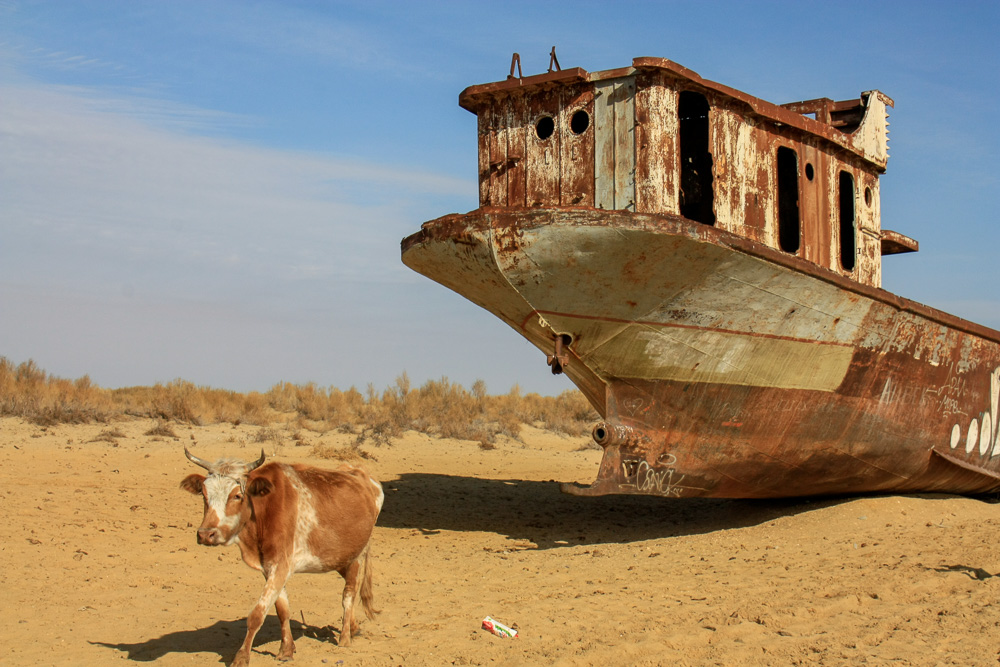 It’s crazy to see such an extreme example of environmental mismanagement, but it certainly brings a vividly disastrous scenario of what can happen if we don’t conserve our water and mind our reservoirs! 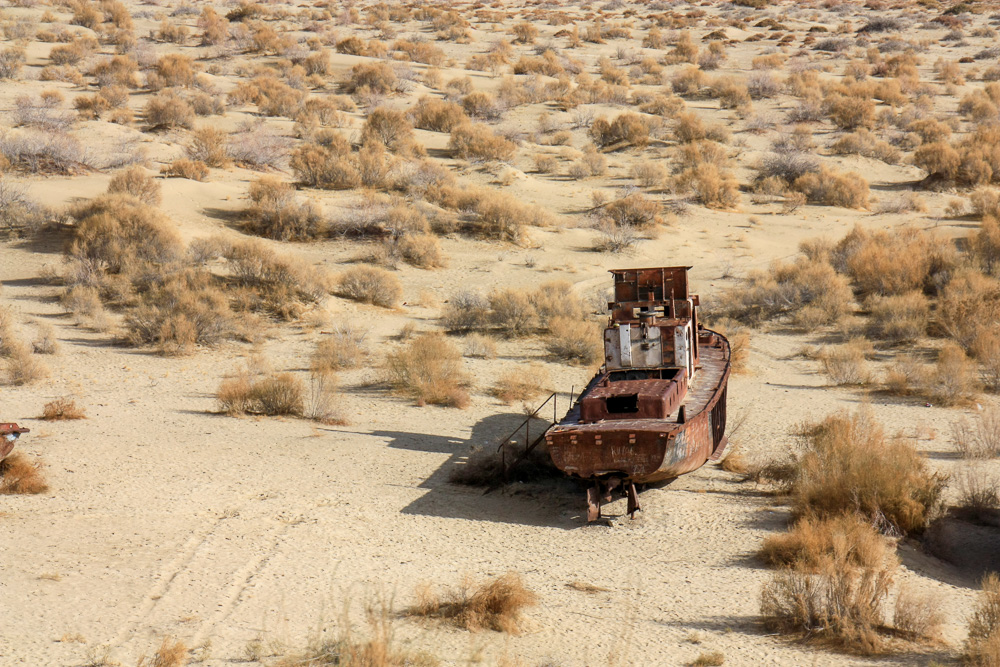