Khiva is perhaps Uzbekistan’s best-preserved city, the final capital of the former Khorezm kingdom (now just a province and a fraction of its former size), and what used to be the setting of the largest slave market in Central Asia. None of that is visible now in its old town, the Ichon-Qala, a pristine, museum-like place that reaches that uncanny valley of “so cleaned up it doesn’t really look real”, at least to me. It’s still incredibly beautiful, but amongst the medressas and mosques and old town houses transformed to souvenir shops, large tour groups snapping away, and an odd emptiness in the streets, I have to admit that it left me a little cold. (Not to mention it was actually below freezing, for my first time in this entire year of travelling! Perhaps that’s why the streets are empty.)

Having seen enough mosques and medressas and museums (which are often haphazardly translated anyway), I opted to forgo the admission tickets (save for one) and just wander around within and around the old city walls, peering/sneaking into whatever places I could, and climbing up the city walls (rather than pay for the watchtower or minarets) for an overhead look. 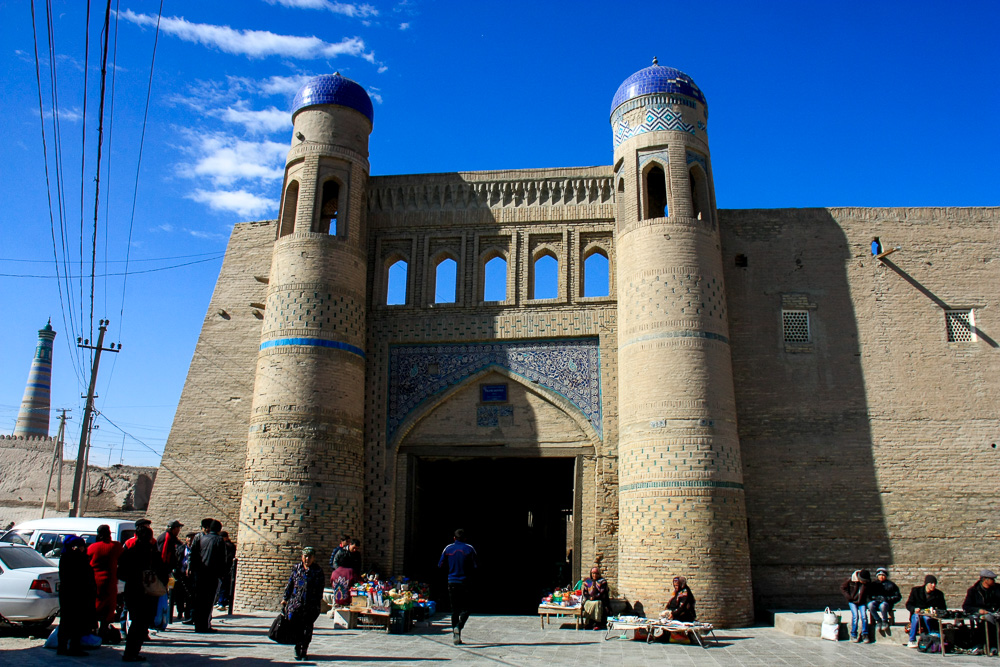 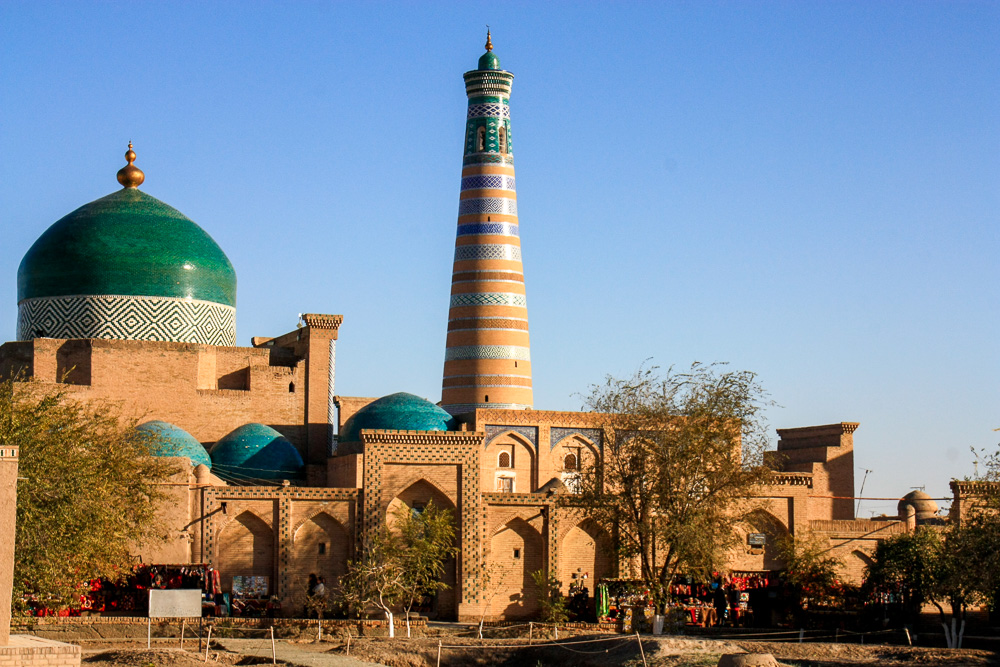 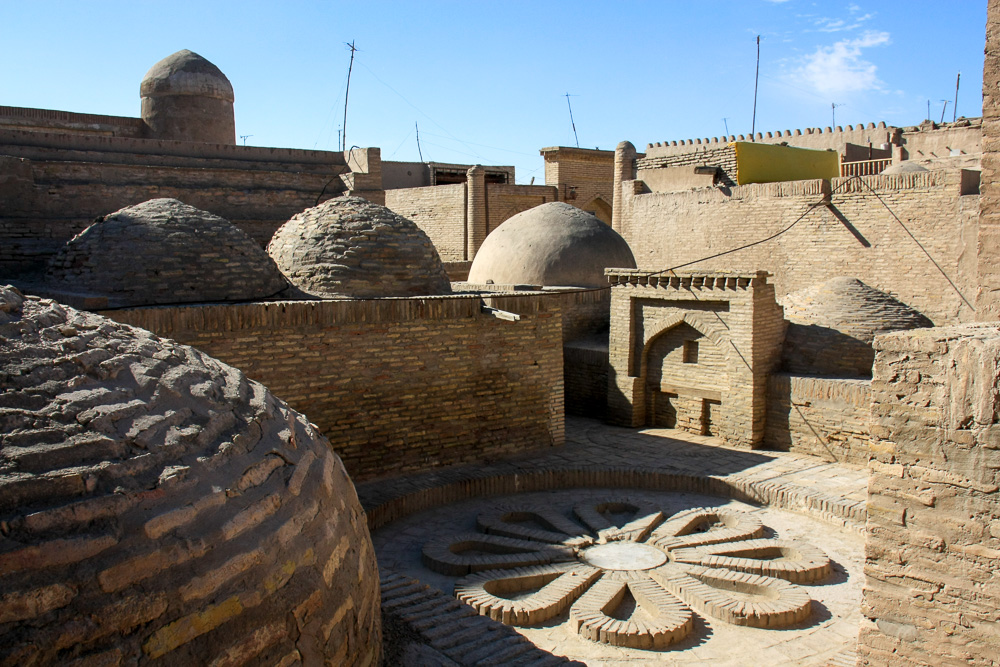 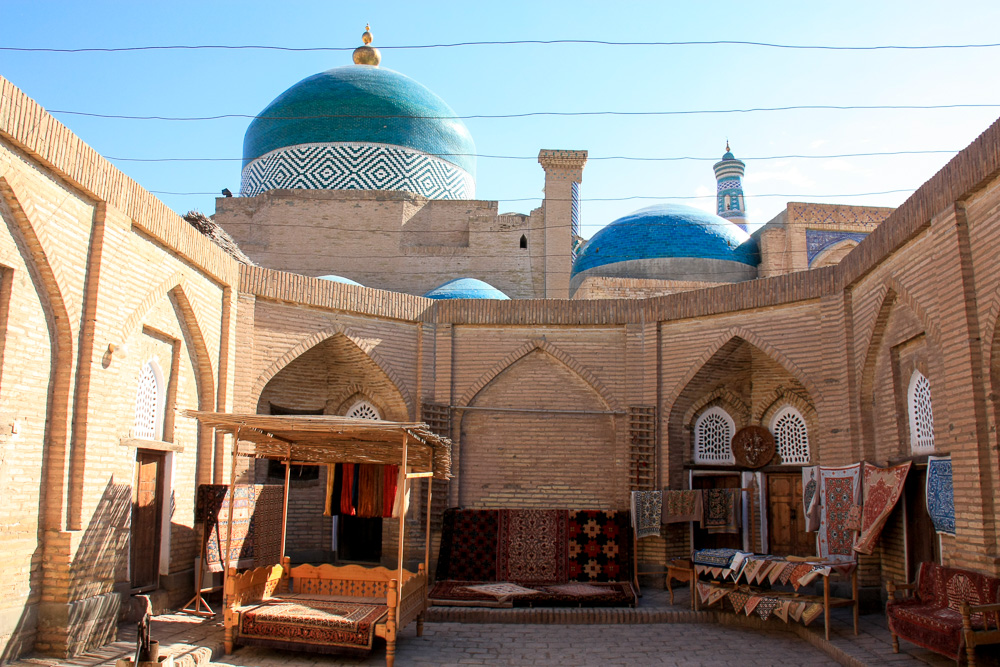 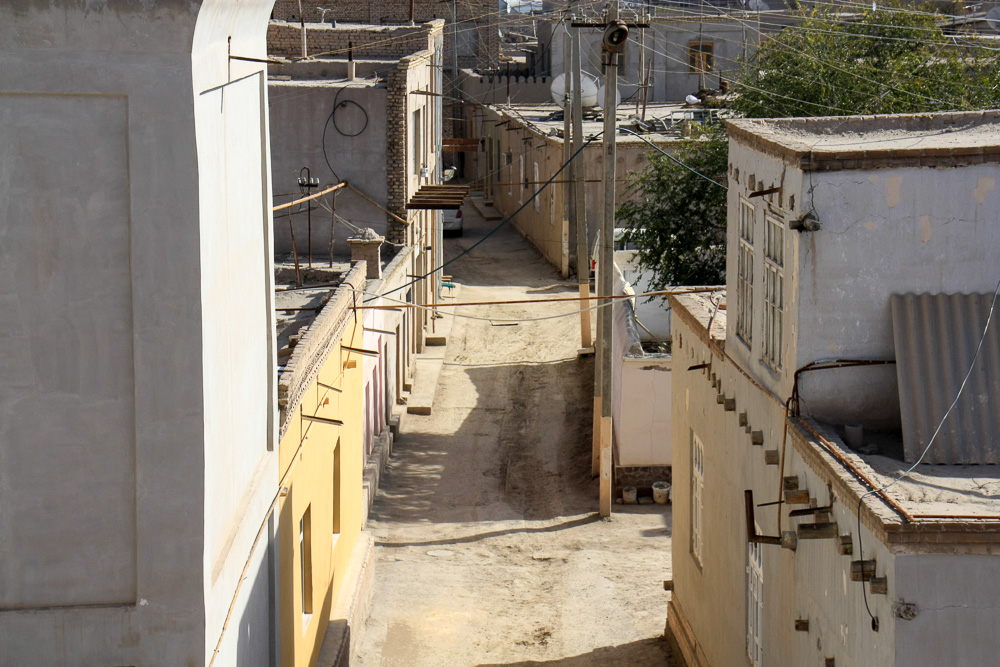 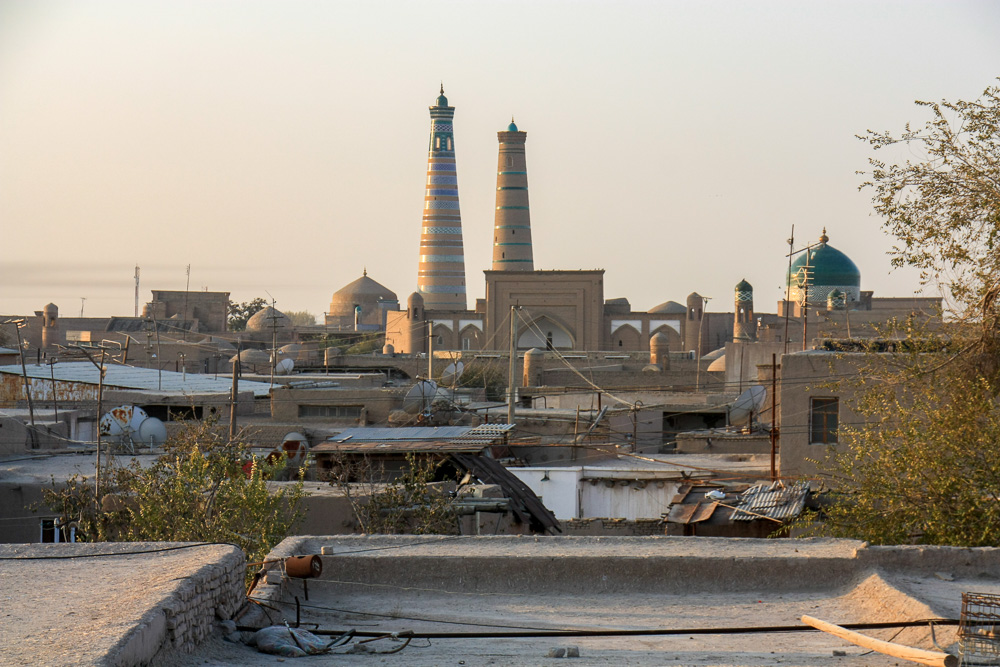 Far more life was found directly outside the city walls, at the bazaar… 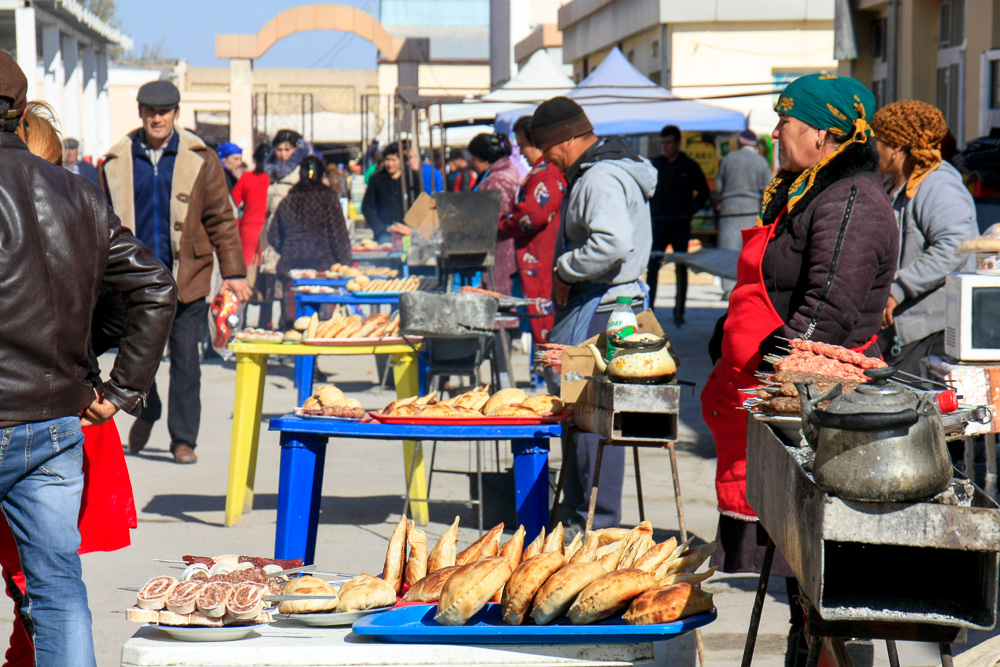 But I digress — back to what’s inside the city walls. Among the highlights is the Kuhna Ark, former residence of the ruling khans, complete with throne room. While the courtyard/stables don’t look like much now, the outdoor mosques are a highlight, full of extremely dense blue tilework. 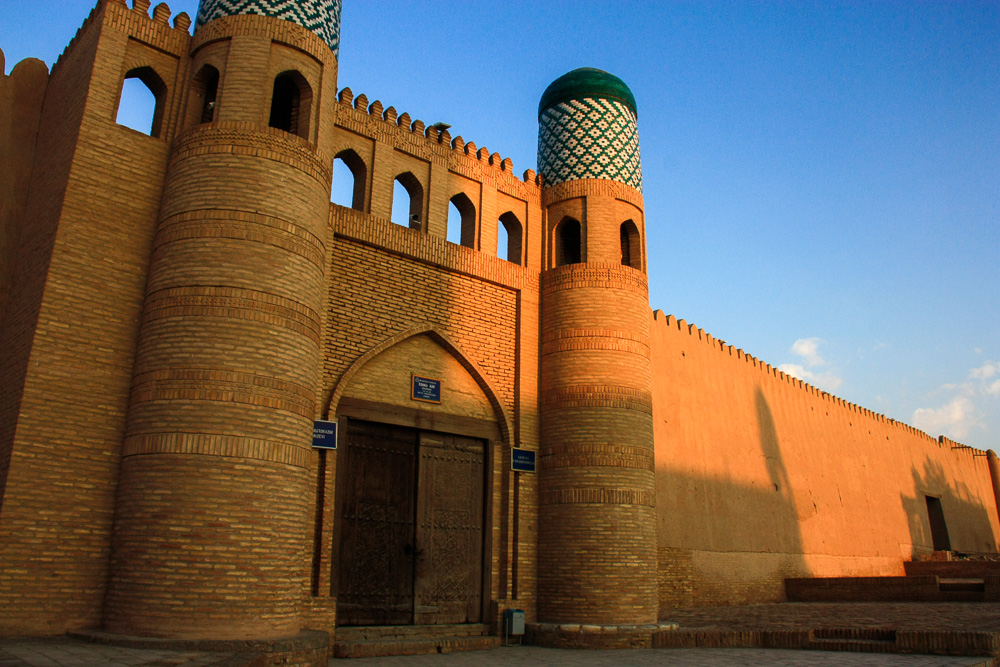 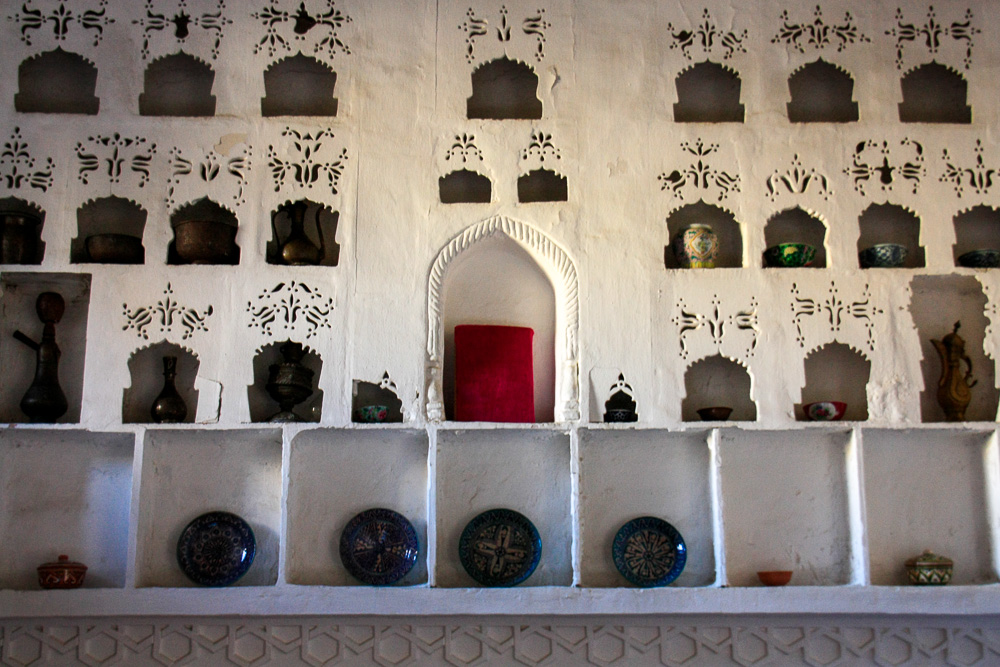 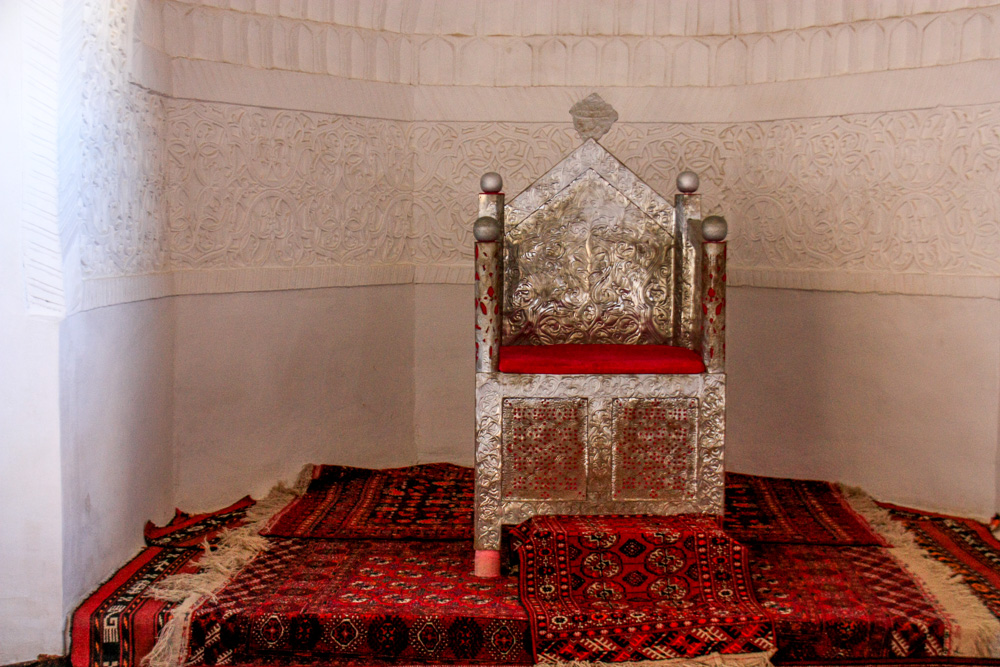 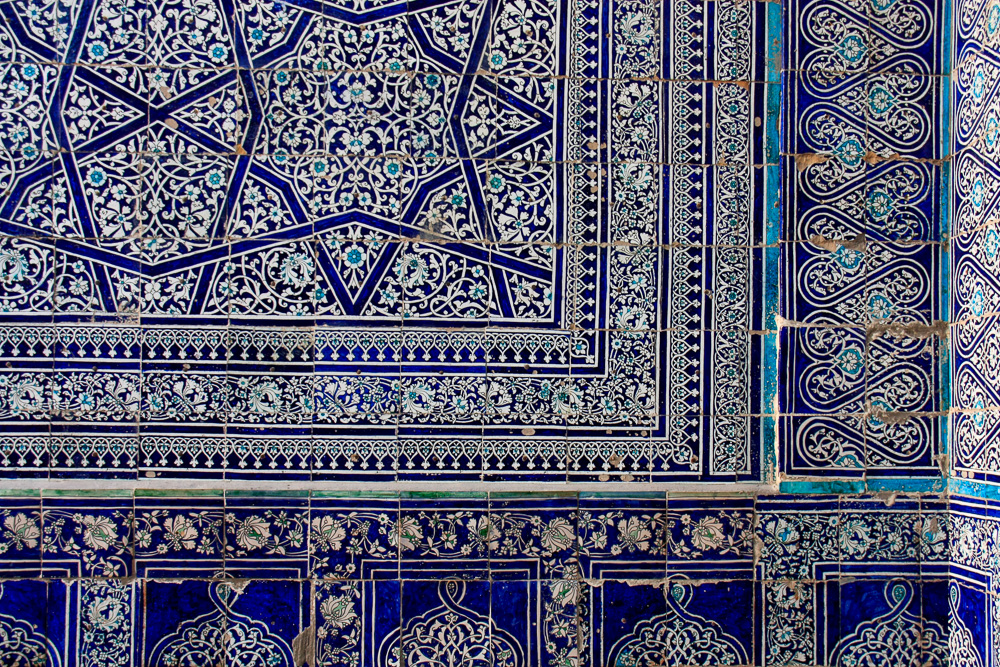 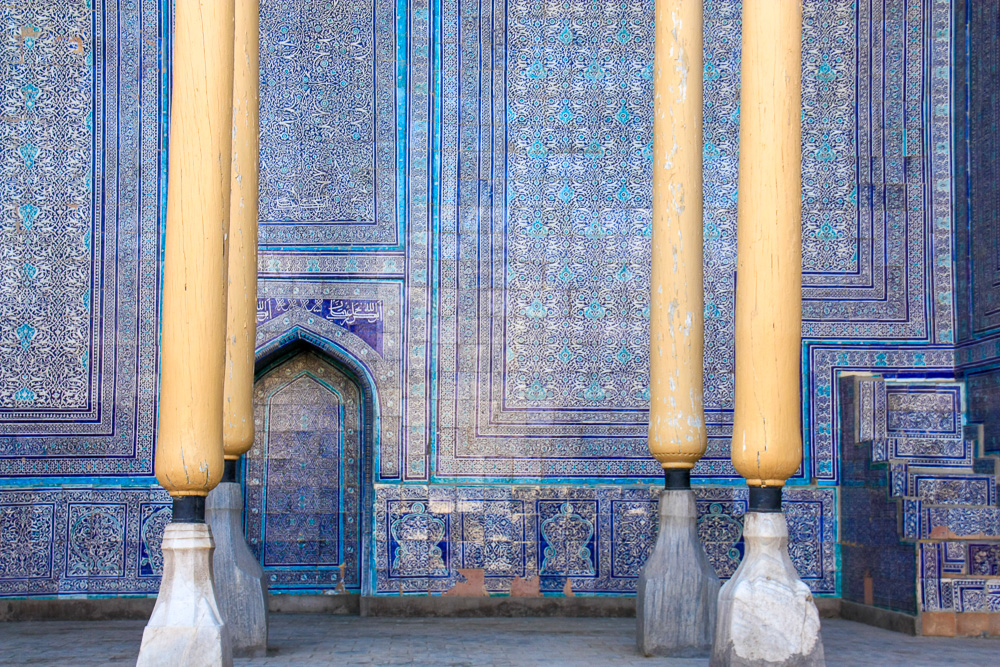 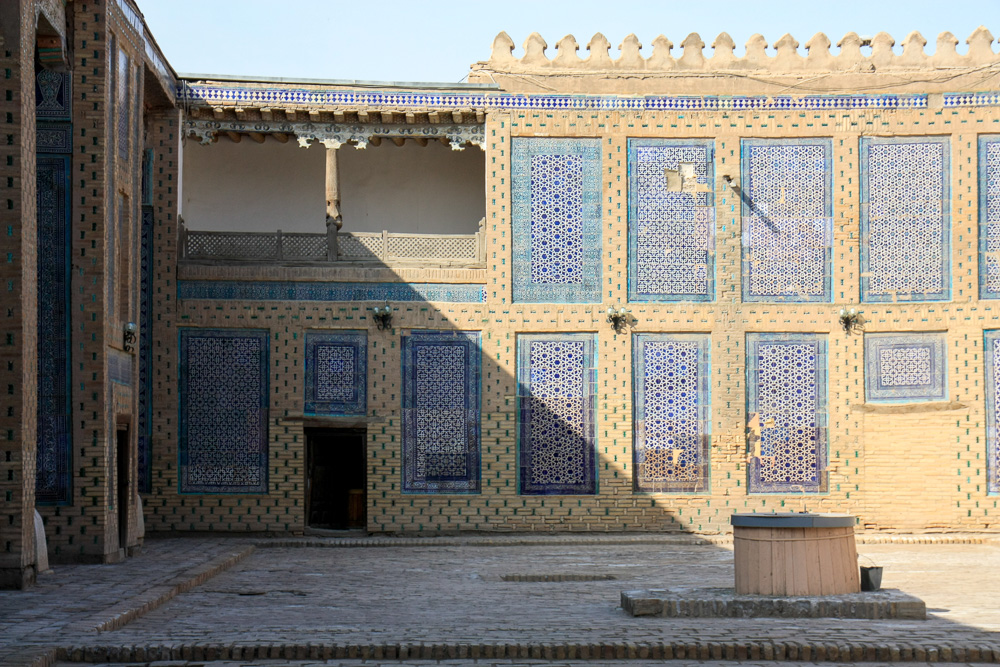 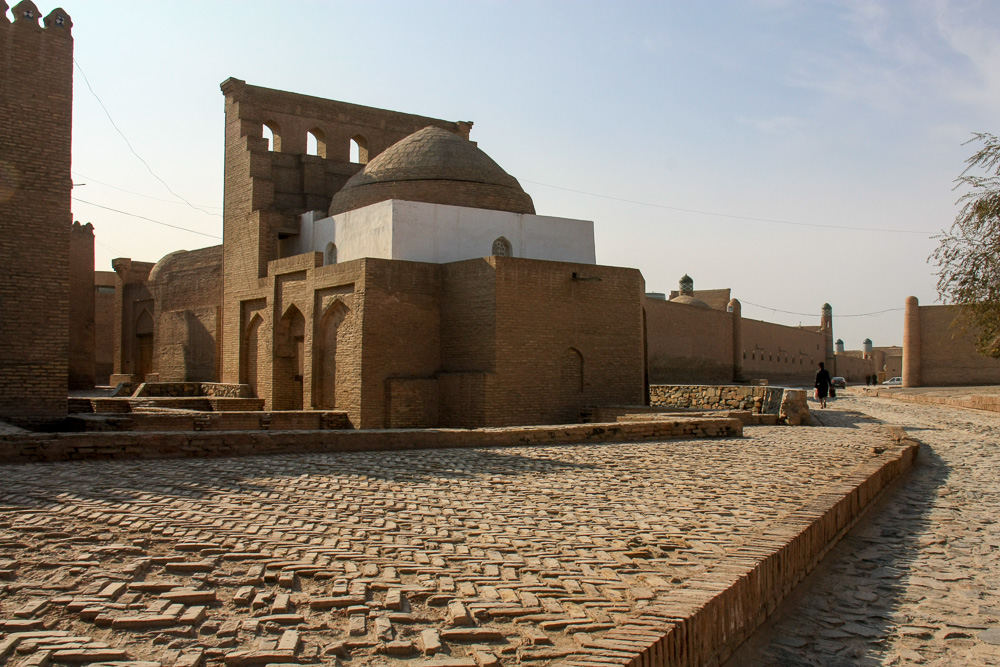 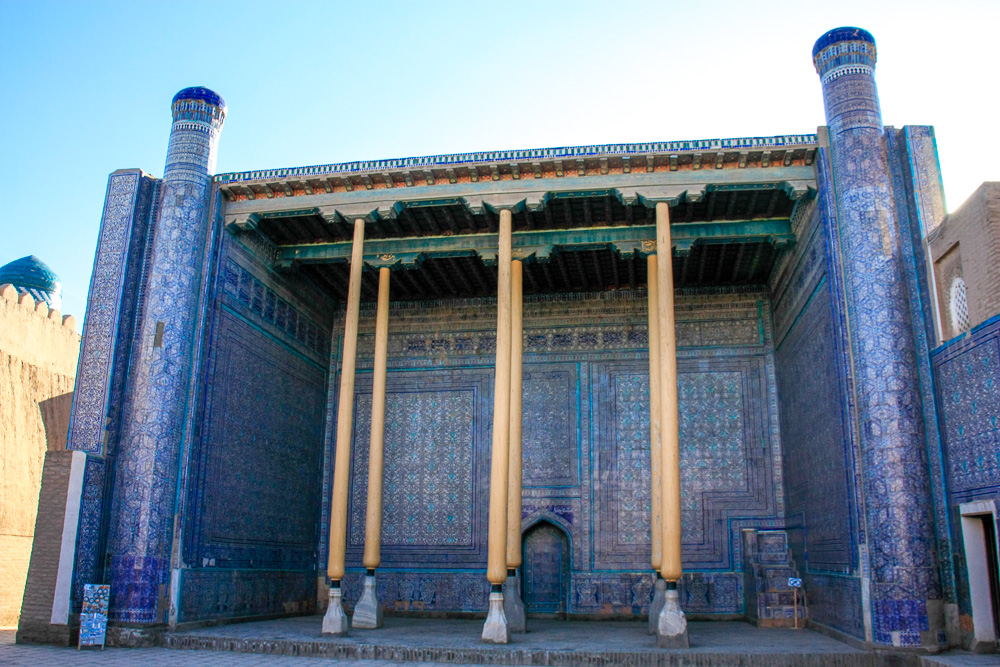 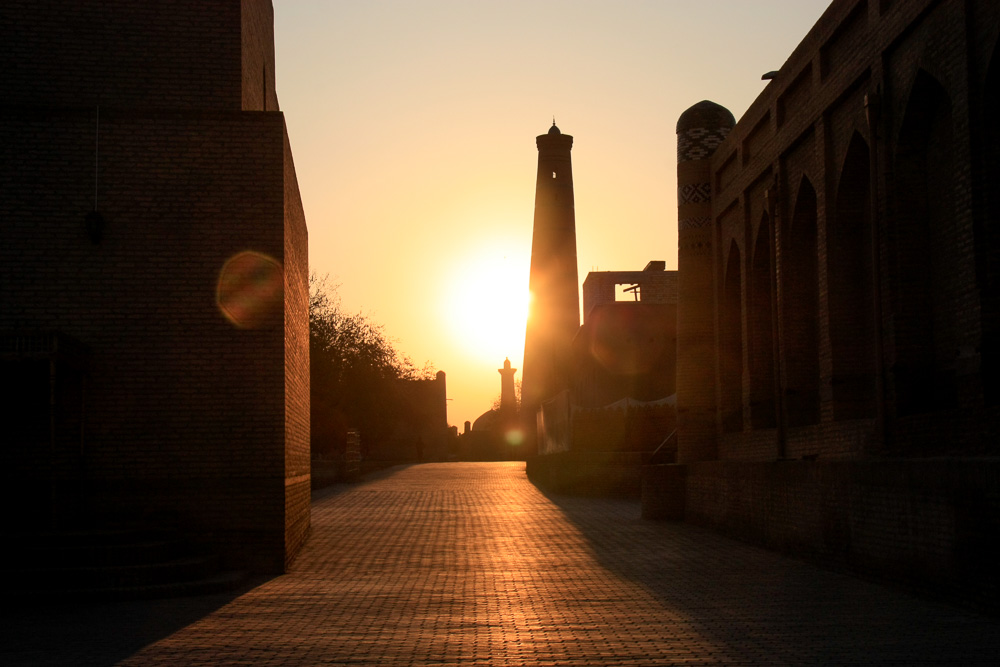 For more dense tilework, there’s the Pahlavon Mahmound mausoleum, dedicated to the poet/philospher/wrestler (?!), its quiet interior still used for pilgrims and those seeking to pray with an imam. 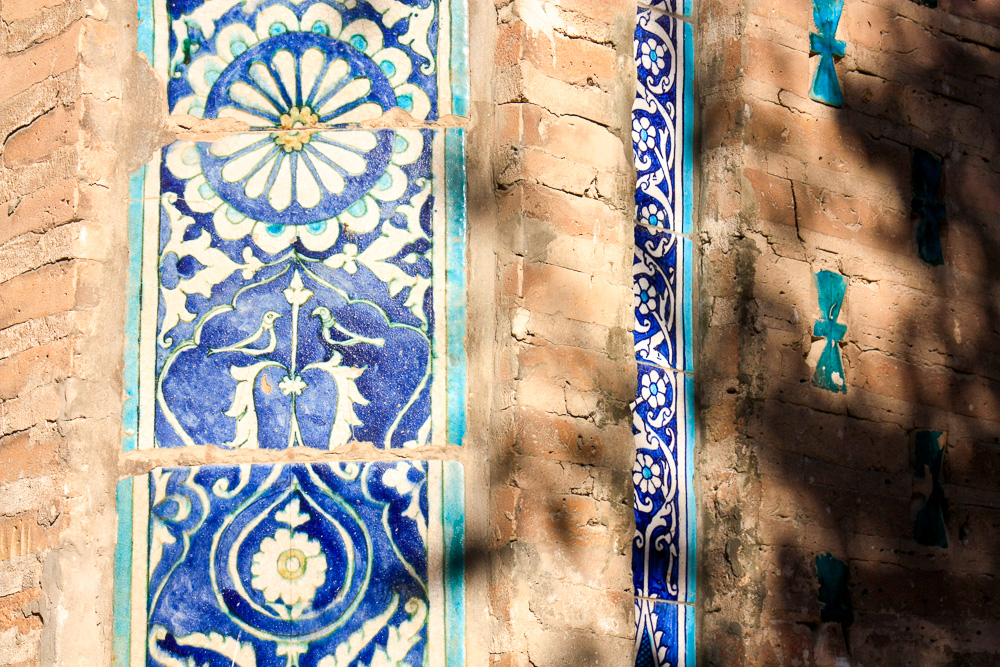 Perhaps the most visible landmark in Khiva is the Kalta Minor. A minaret left unfinished after the khan who commissioned it died, its stump/base is enormous — the khan wanted it to be so tall that he could see Bukhara. Mind you, that’s something like 450 km away, so I’m not sure if it would’ve actually have been possible! It’s also the only minaret so lavishly tiled in blue. If I didn’t know it was a minaret, in a different time and place, I suppose I could’ve mistaken it for an avant-garde tower structure! 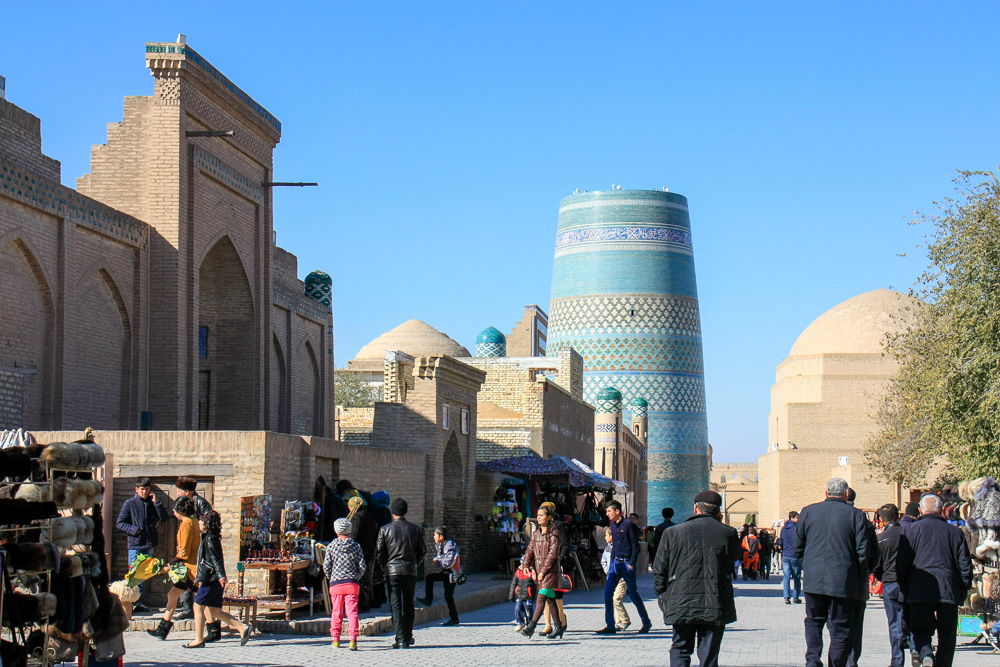 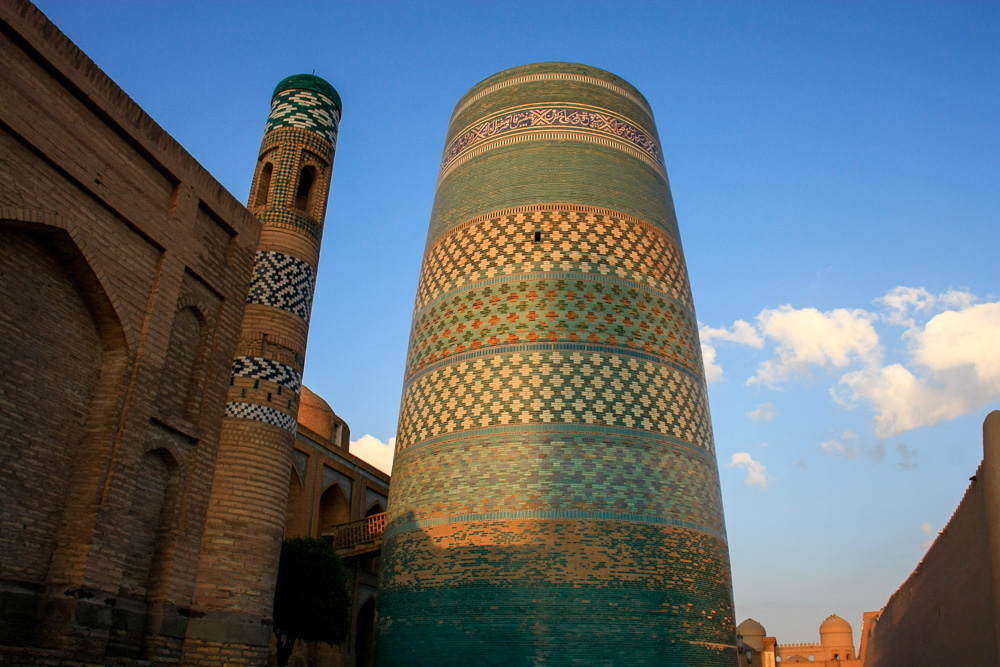 There’s also the Juma Mosque, notable simply for having a roof supported by hundreds of columns, each delicately carved. 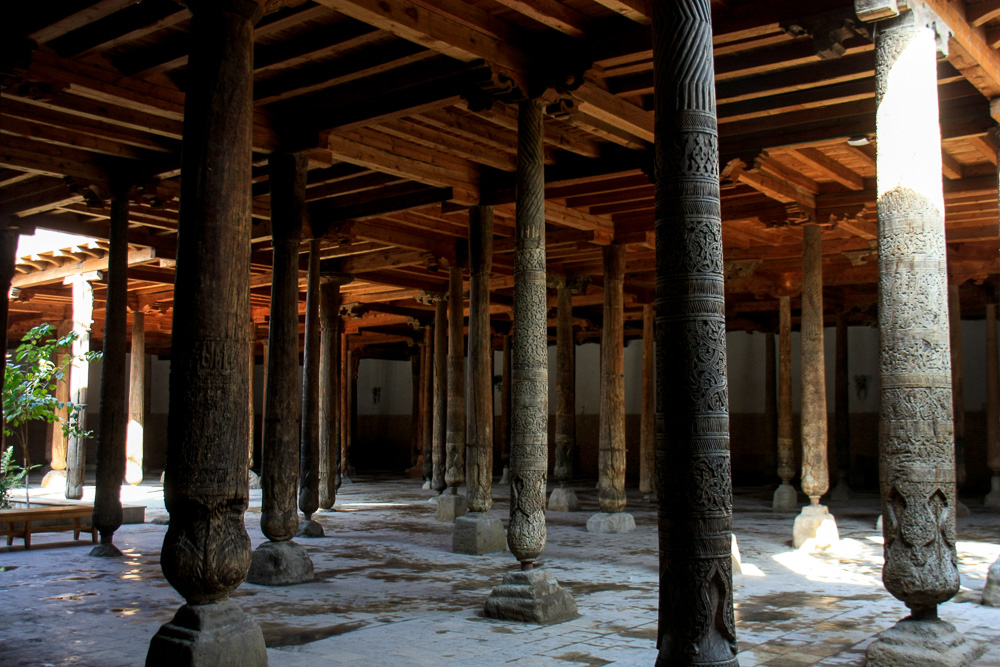 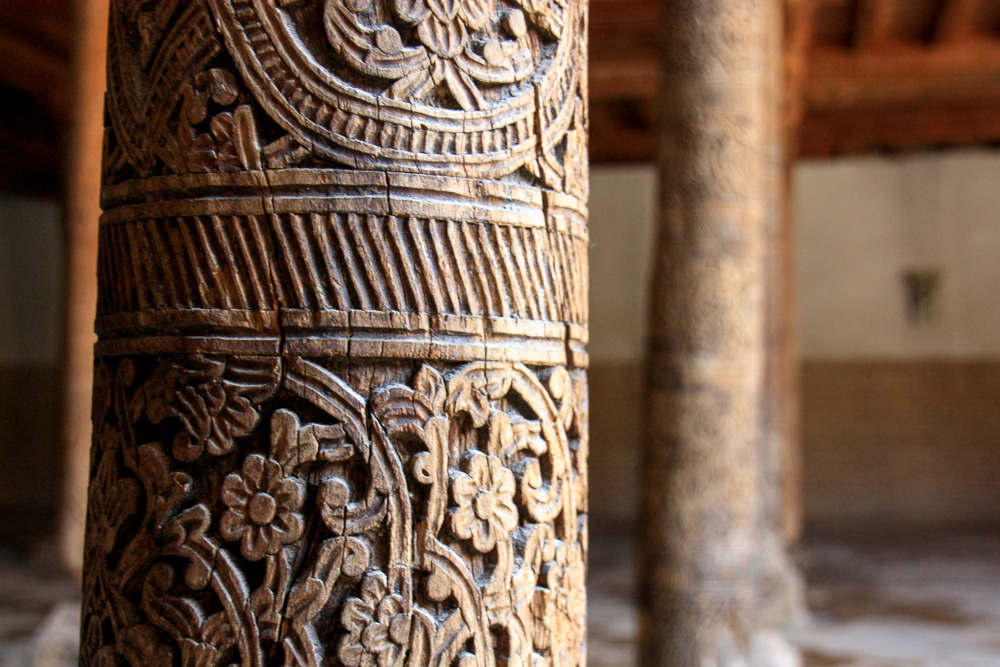 And curiously, there’s a claim that Khiva was founded by Shem, son of Noah, when he discovered a well in the area. Sadly, that well is in a walled-off courtyard, and I couldn’t see it, but it did give me an excuse to wander past the houses in the area, still full of residents — though given how cold it was, they were probably all inside!

Khiva wasn’t the only capital of Khorezm — for an even longer time, that title belonged to the city of Konye-Urgench, but that now lies not far over the border in

Turkmenistan, with the former khanate falling victim to Stalin’s borders meant to divide and suppress revolt. With that area far harder to access as a visitor, I joined travellers Alexa and Cesar and we decided to visit what other remnants that we could of ancient Khorezm that are left — which are now part of the separate province/autonomous republic of Karakalpakstan. (More Stalin trouble!) We hired a taxi to ourselves, passing a whole lot of cotton harvest before the landscape changed to endless desert. 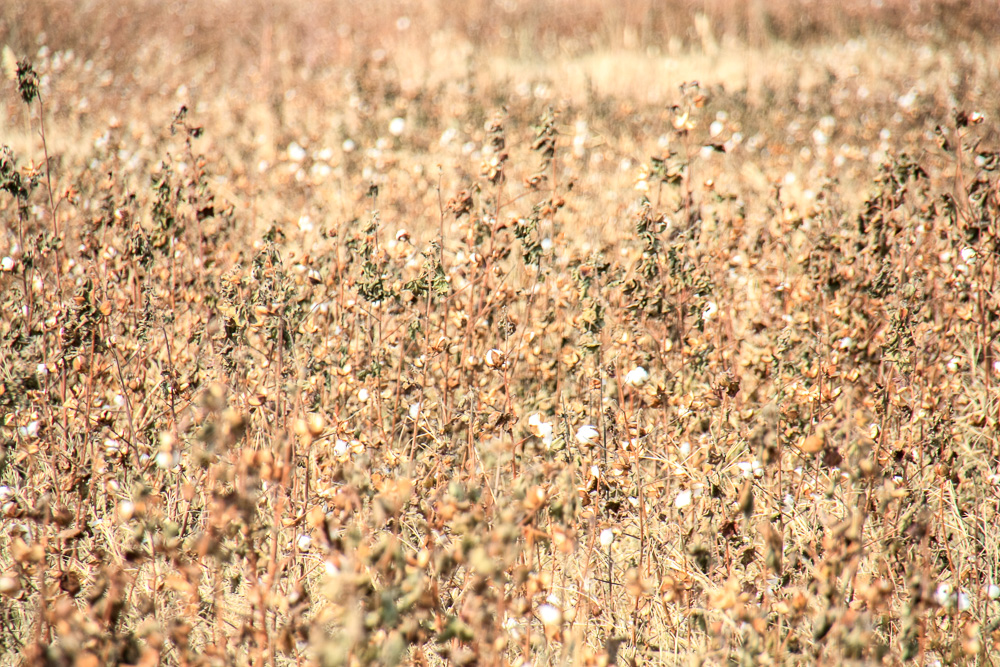 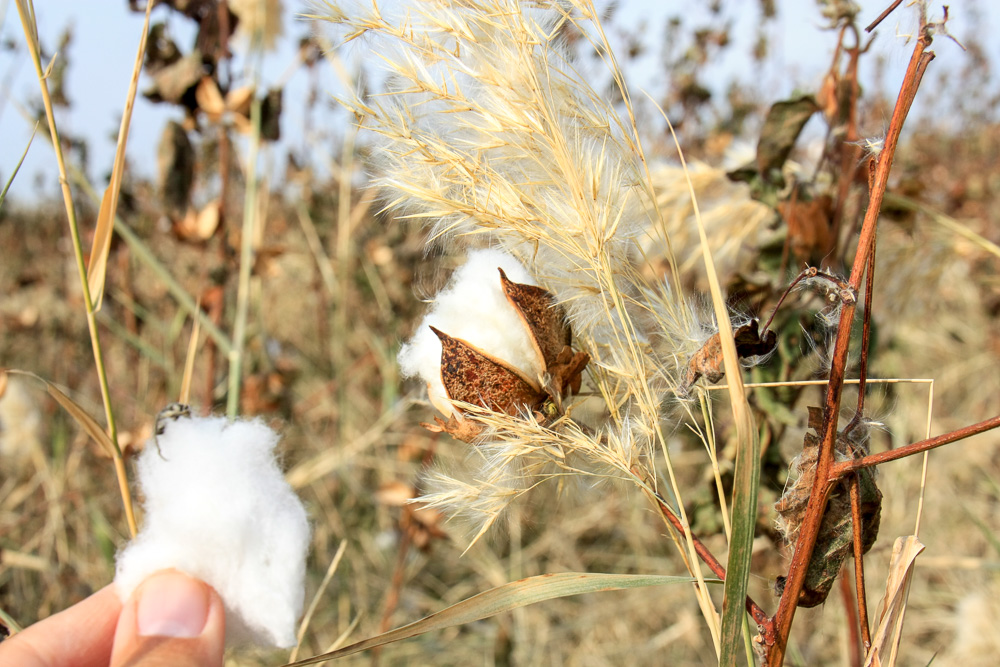 Two hours north of Khiva are a smattering of ancient fortresses, dating back from the 4th century BC to 7th century AD. Having all of the places to ourselves, we were astonished to see how much still survived. While some of it has been restored, it isn’t hard to see how incredibly imposing and grand they once were: Toprak-Qala with its clearly-visible rooms, Kyzyl-Qala with largely-uneroded arches and strong walls, and two of the three fortresses of Ayaz-Qala, one looming over the other and both standing high in the desert like some cartoon villain’s castle. 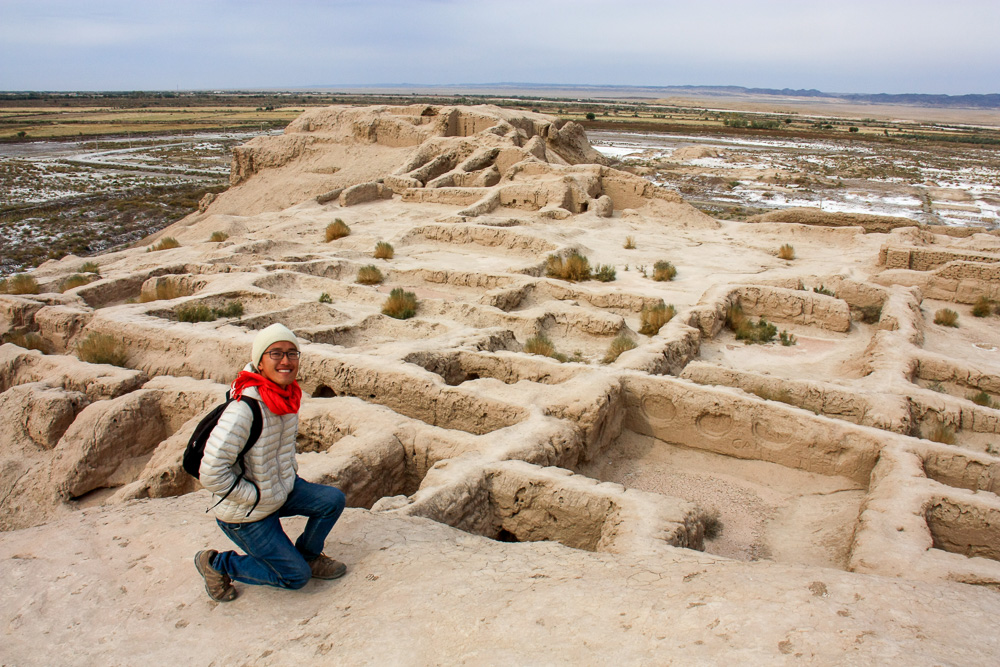 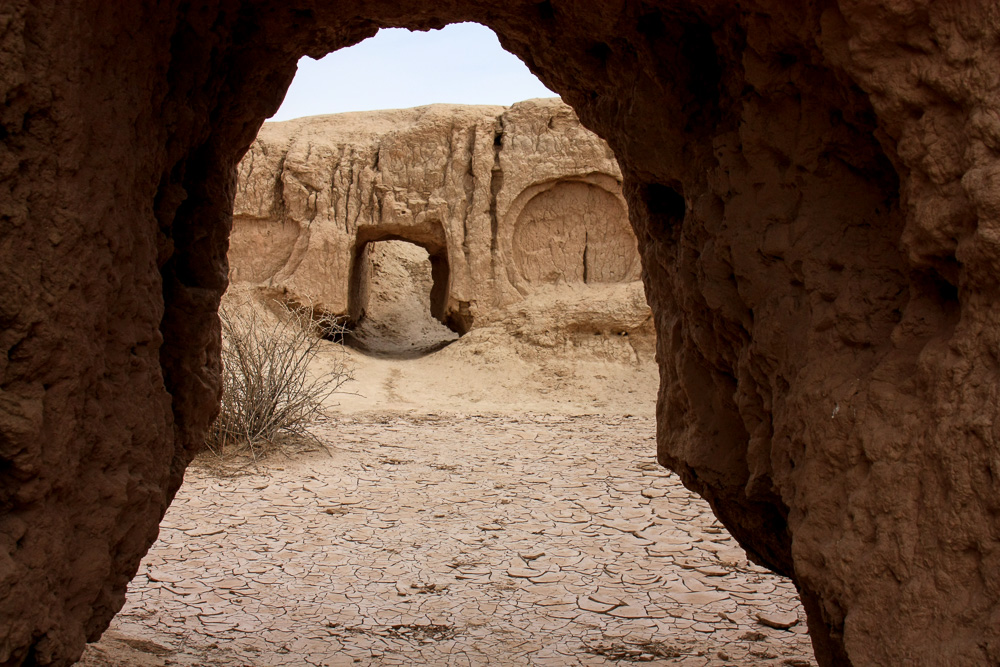 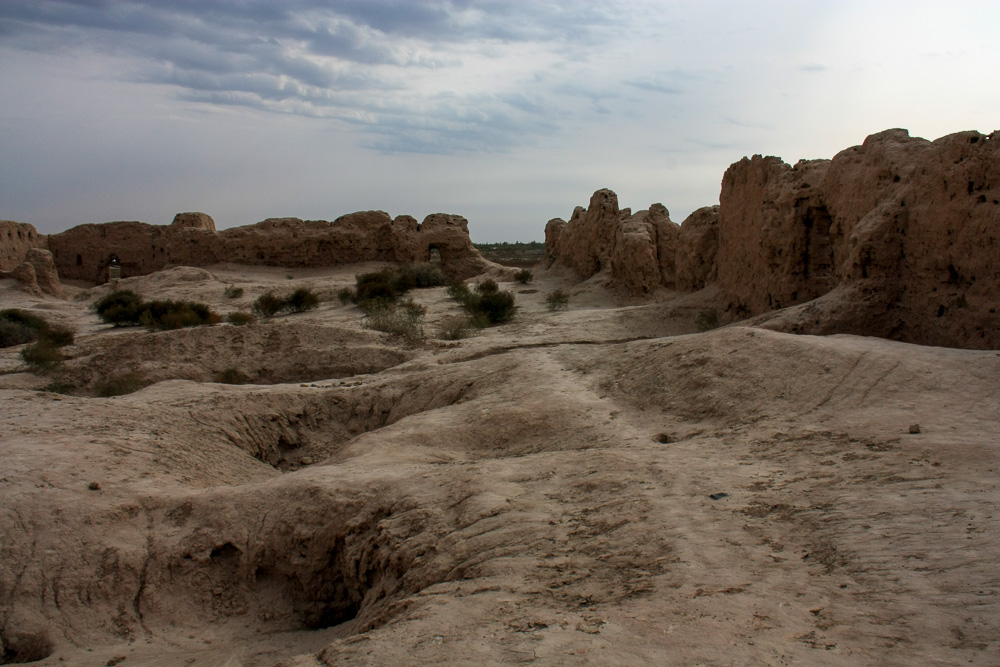 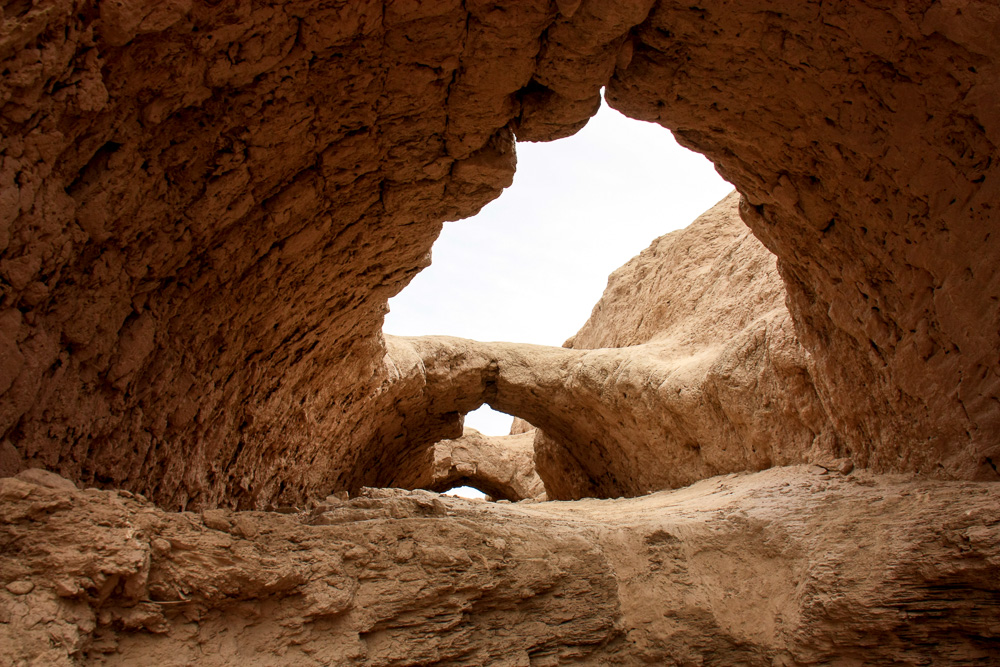 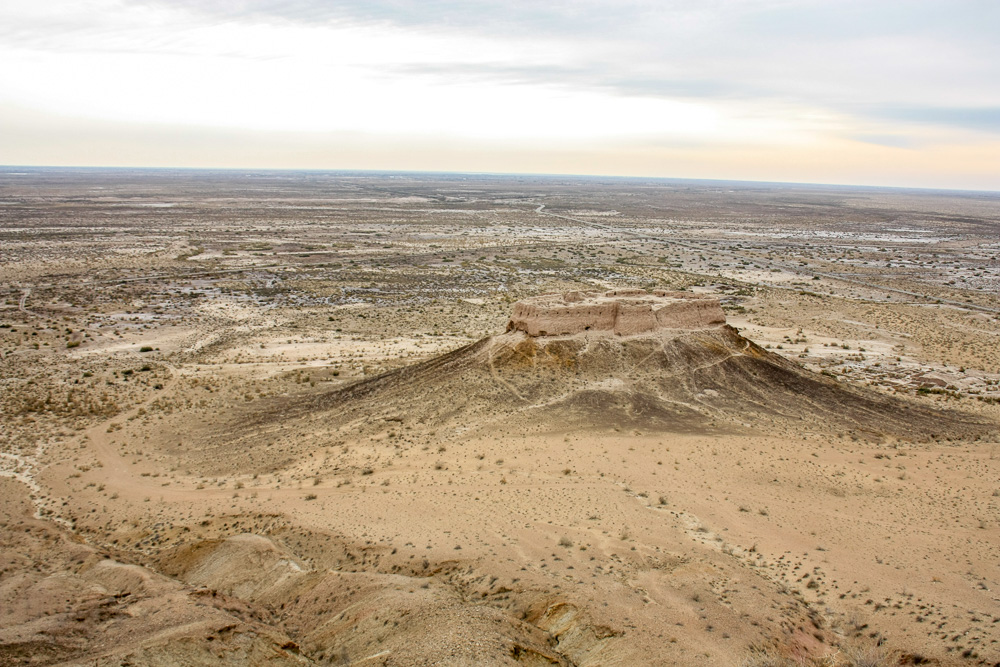 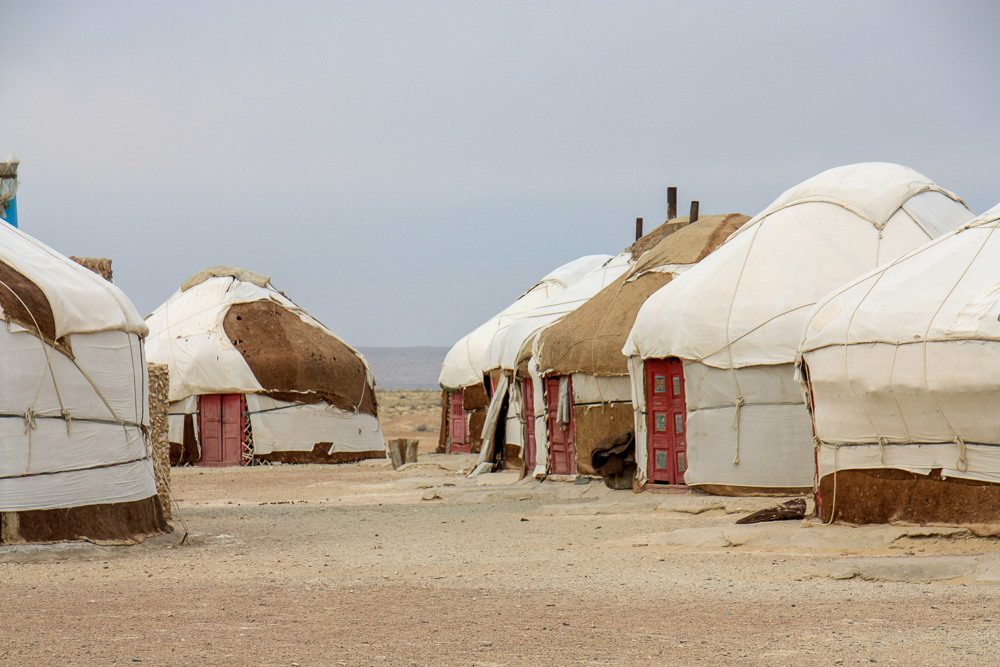 But with time, the stories do inevitably get lost in the shuffle, and unfortunately, we had no historical context to any of them, who of the Khorezms used them, and what they may have been used for: they’re not that far apart! And indeed, there are quite a few more out there — the area’s called Elliq-Qala, meaning fifty fortresses! But like in Khiva with the countless mosques and medressas, we were pretty satisfied, content to run inside and stay warm.