Bit of an early start – over breakfast with Inara and Leiko, I found out that for the past few days, I had my watch set wrong!  Morocco is one hour behind Spain and no one told me, nor did I glance at any clocks…so I woke up a little bit too early for my bus.  Well, at least it wasn’t the other way around!

Fes is a world away from the calm of Chefchaouen.  It’s home to the largest medina (old Arab city/quarter) in the world.  It’s definitely in-your-face – there’s the sights and smells, the impossible-to-navigate “streets” that have names but don’t have signs (meaning a map is pretty much useless), merchants and artisans of all kinds, and of course…touts.  Oh, and since I’m Asian, everyone calling me Japanese.  “C’est la même chose!”, they call out in protest when I try to correct them – a futile effort.

I delve into the street food – a stall with brochettes (and a few flies, but really, which stall doesn’t have them?) catches my eye.  A father and daughter (without hijab, unusual to me) are tending to the stall.  “Sandwich?”  Sure thing, it was 4 pm.  20 dirhams for 10 brochettes (skewers of meat) in a sandwich, a little too much – I took half that.

Delicious, but really hot – plus a mint tea and the heat of day (thankfully shaded off in the medina), it was difficult to eat without sweating buckets.  A few locals join me in this tiny, tiny, stall of a cafe and eye the foreigner.  Nevertheless, I could sense that this stall was different and wasn’t targeting tourists.  When the daughter stepped out to grab me some tea, the father and I started a conversation in French…and he implored me to get his daughter’s phone number.  He was joking, yes, but I’m pretty sure I heard “Mariage!” a few times.  That certainly got my normal “I don’t understand but I’ll nod anyway and pretend I do” reaction to change!  Oh, Morocco. 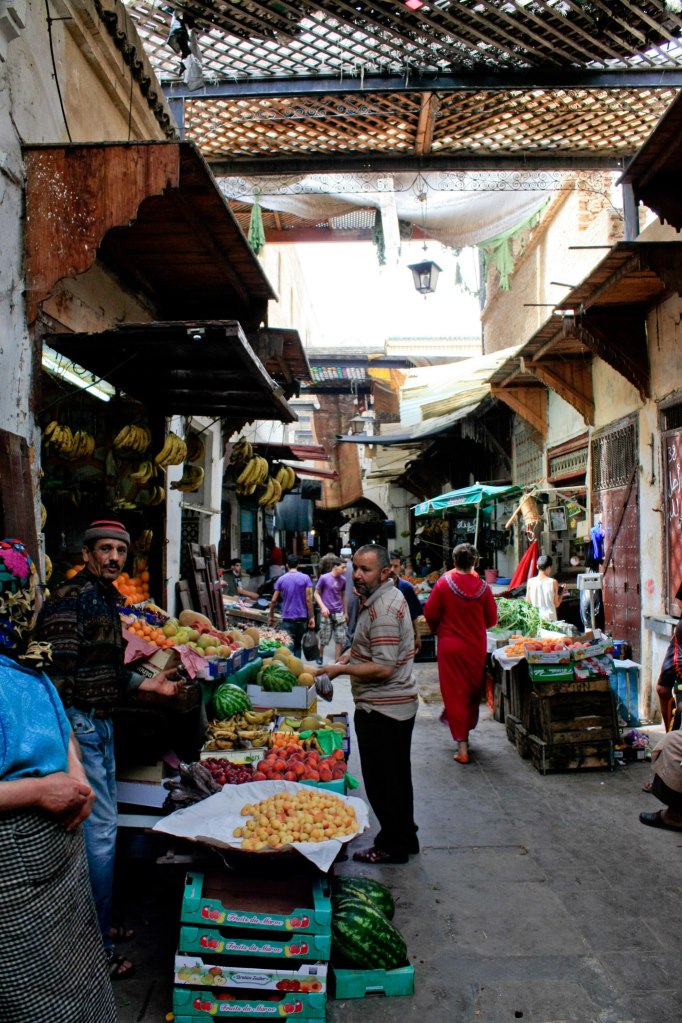 With the rest of the day ahead of me, I tried to do some sightseeing – one of the primary sights of the medina is Bab Bou Jeloud, the blue gate and the largest entry to the medina.  It’s about a 15 minute walk…but it took me 4 hours!  I got hopelessly lost in the medina, trying to avoid asking directions from people I sensed would corner me for a tip, and everytime I made a turn that I was certain would lead me in the right direction, I would find myself in a spot I was in five minutes before.  Even when I did successfully ask for directions, the turns were so numerous that I’d lose my way again.  Finding my way back to where I started was equally troubling, and an exhausting experience.  The medina has several coloured trails set up by the tourism ministry – they’re signs that hang high above the action, but point to where you turn.  However, missing one sign (which is easy for an unobservant person like me) means you’re off the trail.  I ended up finding every single coloured trail while trying to follow the blue one, then finding myself entirely outside the medina altogether when I passed all of them! 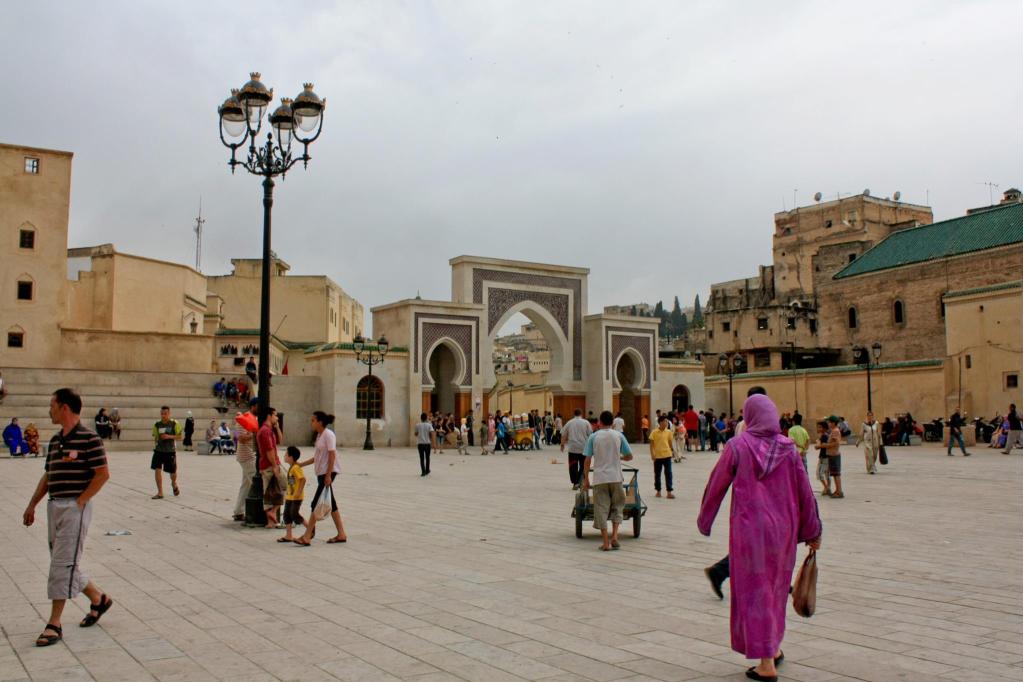 So…the next day, I decided to go with a city-certified guide.  €5 is a bit expensive, but for my sanity, definitely worth it.  It turns out that I had ended up stumbling to almost everywhere the tour took me, but at least I got much more information and historical context to it. 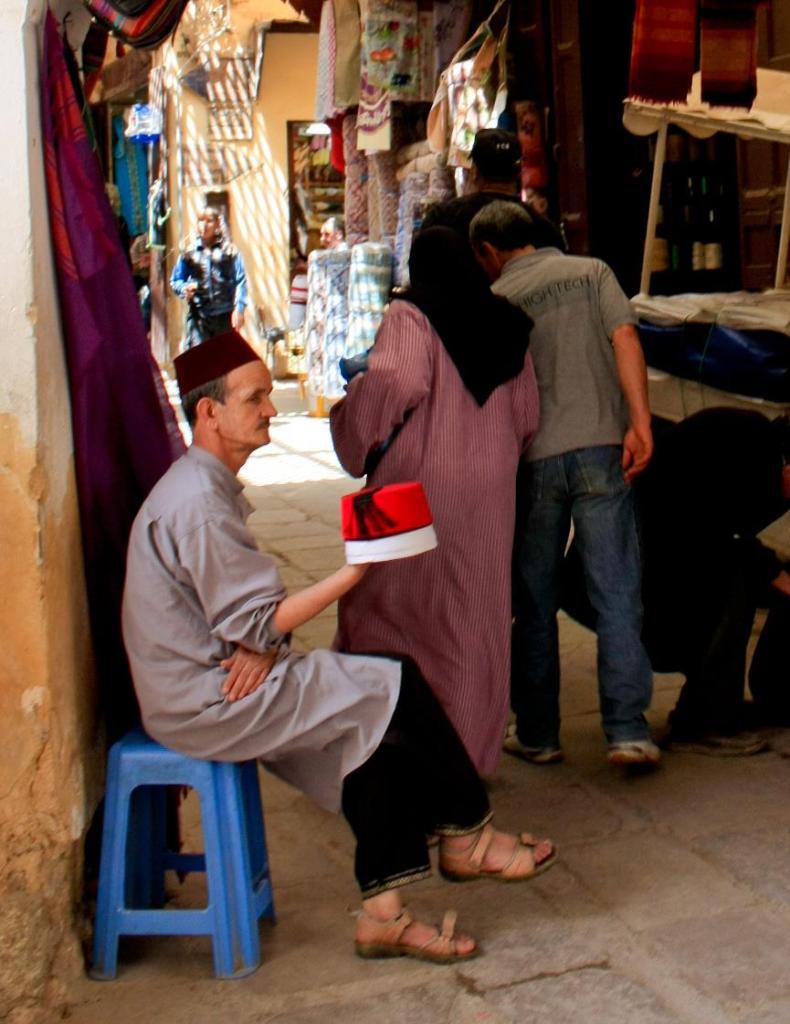 There are over 300 communities inside Fes el Bali (the medina), and each community has five essentials – bread (a bakery), water (a fountain), a hammam (public baths), a mosque, and a Quranic school.  So yeah, there are over 300 of each inside the medina!  Each community is based on families that compose it, but I think some of the communities also specialise in a specific craft – there were many sections of the medinas that just sold metalworks, or just pottery, just nougats, just wedding carriages, etc.  Of course, there were also the touristy streets.  With these crowded and narrow streets, no cars are allowed – to bring in supplies, they use donkeys, mules, or horses.  We heard many calls of “balak!” or the French“attention!” during our three hour tour.

Unemployment is low, just 5% in the medina – the tour guide mentioned that people are a lot less poor than most foreigners think.  Indeed, there were few beggars in the medina.  Though sometimes business may be slow, artisans are occupied by their crafts.  However, in modern times, the often-large families will send half their kids to school, and keep half their kids to work in artisan craft to keep the money flowing.  School is free but not mandatory.

The tour guide, Youssef, speaks 7 languages!  Berber, Arabic, and French, but he’s self-taught in English, Spanish, Portuguese, and Japanese.  I have so much admiration for people here – most of them are proficient in at least 3 or 4 languages, and they learn more to get a leg up on everyone else.  If they lived in the west, they’d probably be in high demand.

We were also taken to a pharmacy, where we saw the numerous spices used in Moroccan cooking, as well as fragrances (deer musk or whale musk, anyone?  They actually smell quite nice, but I wonder how they extract it…) and other remedies for ailments (i.e. black anise for snoring).  A sweets shop – we got to sample some dried figs and dates.  A loom – fabrics, generally made of wool (specifically camel) or silk (from plants).  And of course, the famous tanneries – Moroccan leather is world famous.  Preparing leather takes ammonia and pigeon droppings (meaning yes, the tanneries really smell) to soften the leather, then a rigorous soaking in natural dyes.  Setting a flame to a piece of leather does not change the colour, and boy is it smooth and soft!

Later in the afternoon, I grabbed some food at another sandwich stall in the souk (market area).  Though many people were quite bothersome – really just the people who target tourists – if you meet genuine folk, they’re really quite nice and lovely to talk to.  I practiced my French with the stall owner (who of course thought I was Japanese at first, but later understood) as he prepared my merguez and turkey sausage sandwich (delicious!), and as another local ordered beside me, they both gave me a very warm welcome to their country.  I learned one phrase in Arabic – “ba saha ou raha”.  “Avec bon sante!”, explained the stall owner – to good health.

After a really long rest at the hostel, someone brought up the suggestion to try out a hammam, and one was located right outside our door.  Ohhhh boy.  A few of us went together – but the guys were separated from the girls, of course.

First, you go in your bathing suit (or underwear), and sit in a steamy room, just a tile floor and nothing else, really.  You get two giant buckets of hot water and a little scooper so you can wash yourself or shampoo, but once in awhile, the hammam attendant (if you’re paying like we were and aren’t doing everything yourself) will douse you with an entire 10L bucket of water.  Whooo.

Then comes the strange part.

The hammam attendant – ours, a wiry but extremely buff 60-something year old – gets you to lie down, and he scrubs you down with this black paste-like soap.  What we didn’t get was the scrubdown with an exfoliating glove – although we saw that demonstrated on other people.  Then after being doused with a few more 10s of litres of water, you get a “massage”.

Yeah, “massage” in quotation marks.  More like “pretzel treatment”, or as one of the people who went with me so descriptively called it, a “non-sexual Kama Sutra”.

I was the first of the group to go – and I was glad after the fact, because I would not have gone for that “massage” if I had seen what was about to happen to me!  Pulled and jerked every which way, it was like a wrestling match with a clear winner – not me.  The old man cracked bones I didn’t even know I had!  Locking legs then pulling me up by my arms way beyond my stretching point, pushing my leg behind me and in front of me in ways I thought impossible, arcing my back then gently rubbing my chest for some reason, putting his knees up and bending my back on them to the point I was making a bridge, then flipping me to the other side, stretching my back so hard my feet left the ground…some of these movements are absolutely indescribable!  I really wonder who the heck came up with this…but it was amazing, I felt like a new person, and I would totally do it again!

After another dousing, drying off, and some drinking water offered by the very friendly hammam attendant, we left with one final send off: “Ba saha ou raha hammam!”

One extra day in Fes, feeling lazy with not too much else to see, and I sampled some camel meat (not bad), saw a great panorama of Fes el Bali, and made my plans for my next stop.  I could only marvel as my initial plans to go alone to the Sahara happily ballooned to include four other people from my hostel – Darren, Sebastian, and Brodie from Australia, and Mathieu from New Brunswick.  Good company, good times ahead…

One last time on the hostel roof.  The call for prayer (made live in Morocco instead of utilising recordings) rings out from mosques five times a day.  It drones and it sounds a bit like an F1 race, but it comes out from every direction, in a hymnal chorus.  It feels especially peaceful at night – a beautiful contrast to the buzzing medina life during the day.