We arrived in Merzouga at 6:30 am, and Hassan (a tour operator who I emailed prior) met us at the bus station.  We then had about 12 hours to wait before heading off on our camel safari.

Merzouga is a small town right on the edge of Erg Chebbi, a large sand sea (erg) on the edge of the Sahara, set at the base of the Chebbi mountains.  Upon approach by bus, the scenery was a world away from Fes and felt surreal – a giiiiiiaaaaaaant sand dune loomed over everything like a mountain.

The dunes were directly behind the auberge where we rested for the day, but I could only spend about an hour wandering around before it felt too hot.

Fast forward to the evening – camel safari time!  This comes just over a year after I did one in the Thar Desert of Rajasthan, India – I had caught heat stroke and E.coli just prior to doing that one, which made for a rather painful experience.  Luckily, this wasn’t the case (yet).  We set off in a caravan of 15 camels, heading over some very beautiful dune seas with little vegetation (a contrast to the Thar Desert, which had fewer dunes, more dry ground and more bushes).  Riding a camel is fun, but a familiarly painful experience – after an hour and a half, we were pretty relieved to get off.

The dunes changed colour with the lighting of the day – blindingly bright in the morning, they took on a rather orange tint during and after our ride.  Unfortunately, clouds started rolling in, so the sunset wasn’t great (I’m now 0 for 2 on desert sunsets!), but we were pretty satisfied anyway with the view – the nicely lit dunes on one side, and on the other side, the Algerian border and some great mountains. 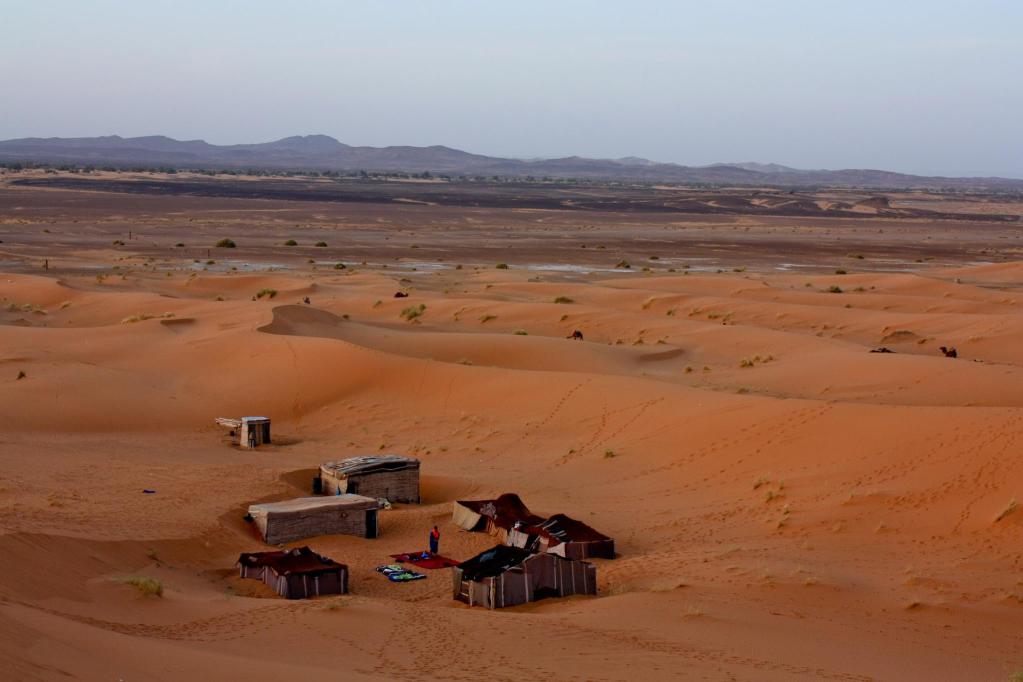 Unlike the India desert trip (sleep on cots set on the sand), we got to stay in a Berber camp.  A little touristy, yes, but it was a great experience.  The sun set, the moon came out and the dunes light up in a wholly different way.  (As a result of the full moon, stars weren’t visible.)  We had a giant dinner, and the staff broke out the music – guitars, hand drums, and singing. 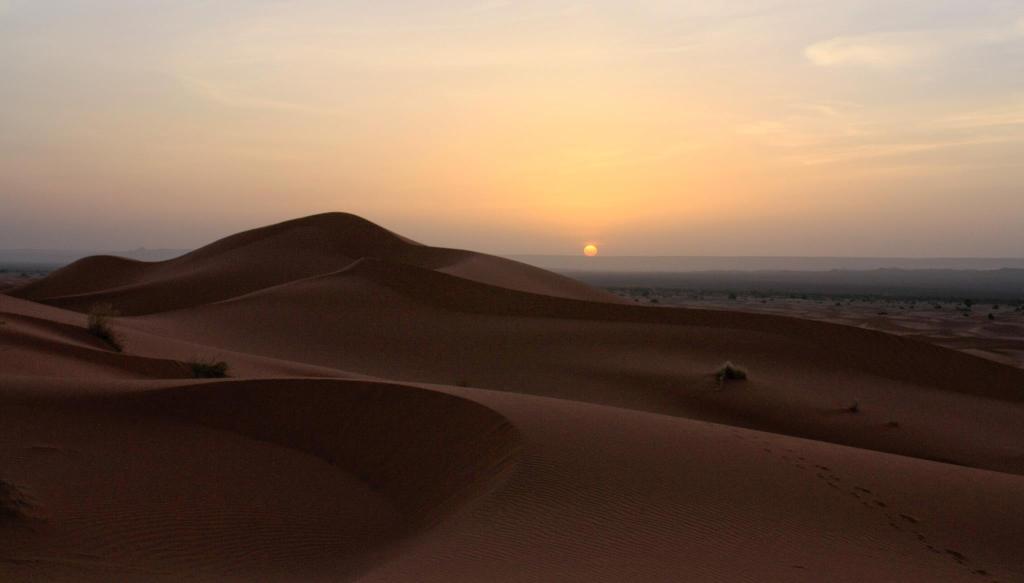 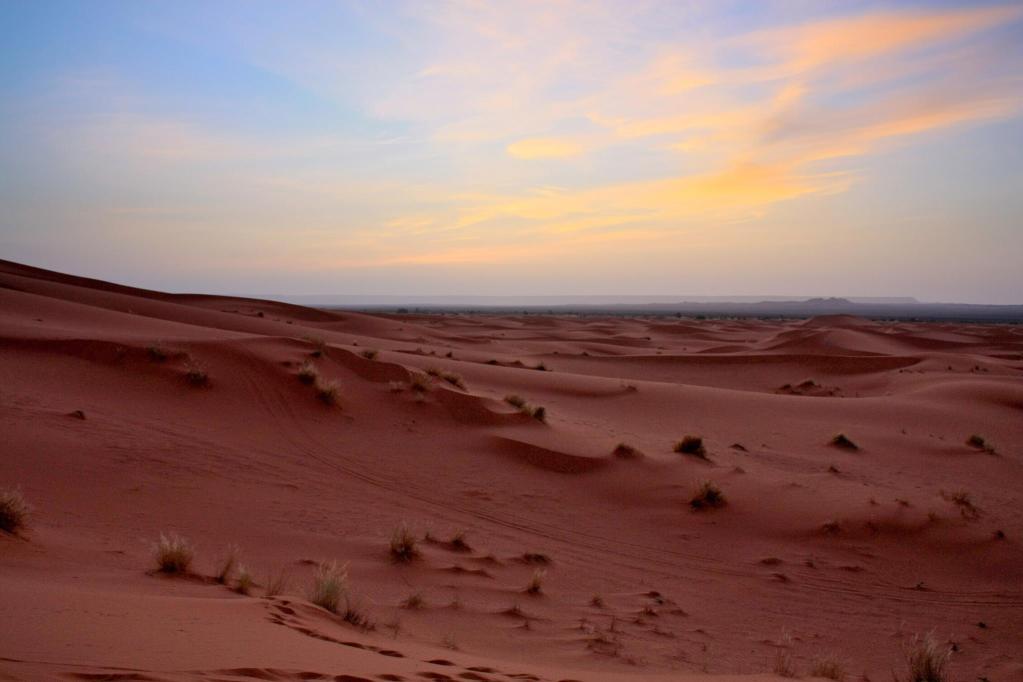 In the meantime, I met Hassan (yes, two Hassans now), the boss of the entire tour and auberge staff.  While on the camels (with him and his staff leading the way on foot), he kept checking up on us…in Spanish?  When I responded in kind, he was a bit surprised – “Japon!  Hablas español?  Nunca he conocido un japones que habla español!”  Despite correcting him about being Chinese, it was settled – I was now Japon for the night.  It then became the running joke among the entire group, especially since Hassan kept yelling out “Japon!” randomly throughout the night, looking for me.  Whoo.

Very friendly guy, always asking me how I was.  He also gave Mathieu and me a bit of a Berber language lesson (“labas” being both “how are you” and “fine”)…and Berber names.  So in addition to being called “Japon” or “Canaria” (Canary Islands – a intentional corruption of “Canada” on his part since I speak Spanish), he also started calling me “Amon Hana”.  He claims it’s some famous desert-wandering Berber dude’s name.  I have no idea.

In the meantime, we got a few perplexing tidbits – most of Morocco’s population is Berber, and I think Hassan mentioned that 75% of the population speak it as well…but you never see signs in Berber, just Arabic!  French is not an official language, but is everywhere just due to the former colonisation.  Also, I have no idea where this topic came from, but Moroccans pay no property taxes, which results in a lot of foreigners, especially from Spain, buying up property here for cheap.

Around 1:30 am, I was already off to bed, but yet again…”Japon!  Where are you?”  Soooo I was dragged out of bed (mattress in a Berber tent) and a bunch of us climbed up a higher dune to continue the music.  Hassan and his friend Moustafa, who speak Berber, Arabic (the two official languages of Morocco), Spanish (Hassan’s most fluent non-Moroccan language, thanks to all the tourists), French, English, and German between them, implored us to share some jokes and just chat.  This turned into a bit of a telephone exercise – he’d speak to me in Spanish, I’d translate in English, and some of our group spoke German, Maltese (close to standard Arabic), and French…and some jokes lost a bit of their humour in translation, but it was all good fun.

Eventually we just all gave up and started the guitars, drums, and dance again.  Sure, it felt like a cheesy day camp (or rather, night camp), but it’s definitely a memory that will really stick with me – the peace of being so isolated in the desert, the dim glow of the moon on the dunes on one side and the mountains on the other, the music, meeting other people and chatting with friendly locals, and the cool sand that was just so comfortable to dig your bare feet in.  No photos could capture this – well, it was also too dark to take any!

Despite Hassan’s insistence, I headed off to bed around 2:30 – I needed sleep, having not gotten much during the heat of the day.  And besides, the sunrise was at 6!  It was beautiful, and feeling the sand get warmer by the minute, watching the sun touch more and more of the dunes, that was really something.

We headed back by camel (ouch) to the auberge, where we had a nice breakfast and said goodbye to everyone else in our caravan.  I sat outside with Hassan, Moustafa, and his friends for awhile…they were just really cool to talk to, and it’s great to see how continuously enthusiastic they were despite taking groups into the desert pretty much all the time.  They broke into another spontaneous music session before we all dispersed.

One thought on “Labas”