It’s probably better to travel by rental car in Morocco.  Taking public transport is a bit annoying – buses don’t run often and the only other option is grands taxis to get between cities: cars with room for four, but they usually carry six.  Since we were travelling as a group of four, we just chose to buy up the two remaining seats each time.

We took a grand taxi from Merzouga to Rissani, and ate lunch where we were dropped off.  Aaaand that’s where things started to go downhill for me.  I had a tagine that had sand in it…and I barely ate.  I felt rather bloated.

We took another grand taxi from Rissani to Tinerhir, with me sitting in the passenger seat in the sun.  After falling asleep for an hour, I woke up severely dehydrated, with my hands cramping, numb, and unclenching difficult.  I’ve had this happen to me before and it became the most painful moment of my life when every joint in my body decided to cramp up, so I knew I had to get something – I drank some soda (need sugars!), Brodie offered up some nuts (need some salt too), and switched to the back.  My extremities recovered, but the suffering didn’t end.  I had stomach problems that continued for the next three days (as did Darren, Sebastian, and Brodie, but I think the heat thing made mine a lot worse), and felt pretty weak the whole time.

Arriving at Tinerhir was weird.  Some guy came up to Brodie nicely, then asked where he was from in English.  When Brodie replied, the guy started screaming at him in French about a Moroccan passport.  Okaaaaay…

When we got to our riad near Tinerhir, as recommended to us by Moustafa in Merzouga, we were shown the view – and knew pretty much immediately we’d be staying an extra night (or week, if we actually had that time).  Perched on one side of a gorge, right over a richly green oasis and right across from the ruins of an old kasbah at the base of some beautiful reddish hills, it’s just a place you can’t say no to!  And our riad itself wasn’t something to scoff at – the terrace was quite comfortably furnished, Berber-style, and we pretty much spent all of our time there.  For me, a very nice place to recover for the next few days.

On our second day, we wandered down into the oasis, crossing it to check out the kasbah ruins (really quite something – I wonder why it’s abandoned).  Then some random old guy probably tripped out of his mind came up to us asking for a cigarette.  We all said no, but he followed us, grabbed Darren’s hand, and started kissing it.  Whaaa?  It took some effort to get him to go away… 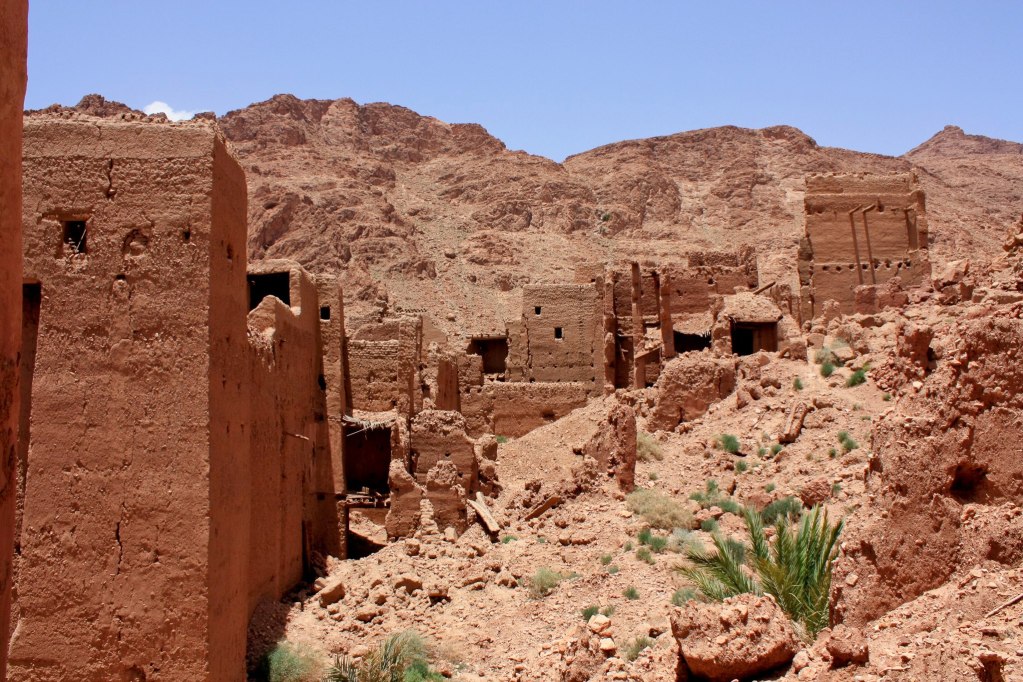 We ran into many locals down there – some asking for cigarettes, some offering hash, and some just minding their own business and helping us with directions.  There was one nice group of boys just playing music by the river, totally unfazed as us hapless foreigners passed by (though very helpful when they noticed we went the wrong direction).

The Todra Gorge was at least 5 km from the oasis, and we tried to walk, but the heat set in pretty quickly on the shadeless road.  We crammed into a petit taxi with two other local passengers – thankfully a short ride.

The gorge itself was impressive, but certainly not what I was expecting – the road ran right through it, and there were some hotels inside the gorge as well.  Kinda touristy.  Still, it doesn’t take away from the sheer height of the gorge walls, and it provided welcome relief from the heat with its shade and its freezing-cold river. 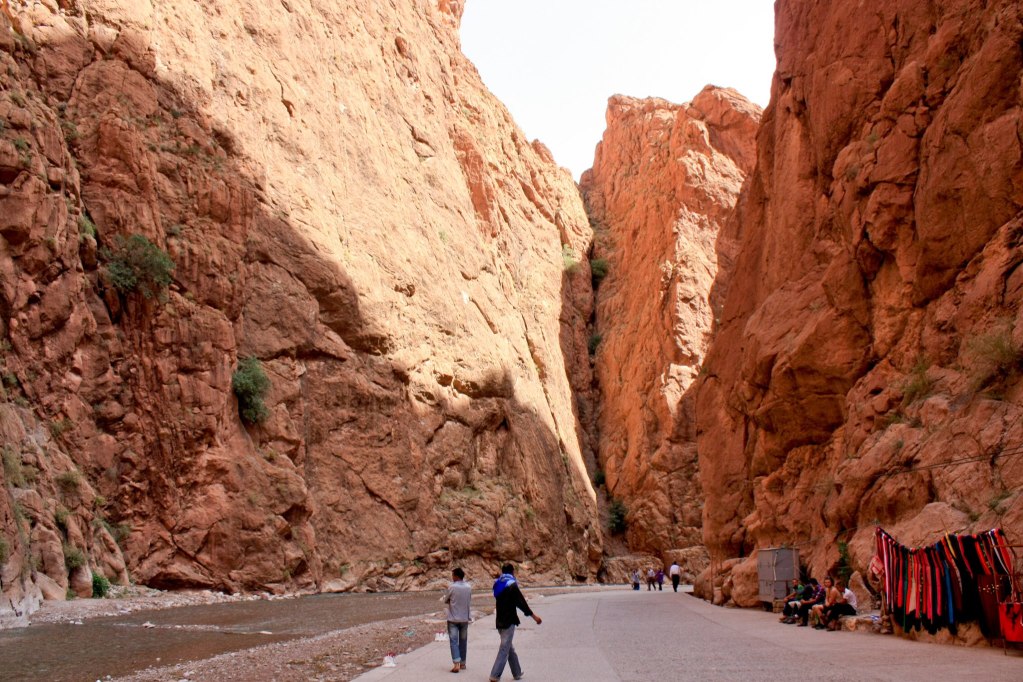 While the others were off wandering a little more, feeling a bit weak from two days of barely eating, I slowly passed by a souvenir stall and was approached by the proprietor, Mohammed.  Unlike everyone else I had just passed by (“konichiwa Japon!”), he simply asked if I’d just like a rest!  To my surprise, he showed me to the back of his stall, where he had a simple little “room” set up with shade, rugs, and a mat to sleep on.  I politely declined, although it was tempting – the temperature in there was quite comfortable.

He never even gestured for me to look at the things he was selling.  Rather, he grabbed me a seat, introduced me to his friend Hassan, and we just had a pleasant conversation – Mohammad offered me some tea as well.  Since the only language we had in common was French, and mine was obviously far weaker than theirs, what we could talk about was pretty limited, but we did have a nice exchange – I again had to specify the difference between Japanese and Chinese people, and talked about life in Canada, while they answered my questions about the gorge (apparently the tidbit about the gorge being so high that there are some places the sun never reaches – that isn’t true), and mentioned that we were visiting in the low season.

One thing I felt pretty guilty about not knowing was that there was a terrorist attack (explosion) in Marrakech last year – Mohammed and Hassan blamed it for the decreased number of tourists, although they say it’s been getting better now.  When I asked them the group and the motivation of the attack, specifically if it was religious, they sort of shook their heads but gave a yes/no answer…I didn’t quite understand.  They did say that someone was tried and convicted of the crime though.

[Doing some research now, the nail bomb was set off in the Djemaa el-Fnaa square (the busiest touristy area), killing 17 people, mostly tourists (including some Canadians).  Morocco blamed Al-Qaeda, who denied responsibility.]

The religion aspect did lead into another conversational aside though, and one that was refreshing to hear: despite being a Muslim country, Morocco is tolerant and generally moderate, with few extremists. From a personal experience standpoint, I can say the same, especially with regards to the most visible aspect – women in hijab, women in western dress, and women in burqas.  No one’s forced to wear or do anything.

I wish we could’ve talked longer, but we were rearing to head back – well, at least after a quick refreshing in the river!

The next day, en route to Marrakech, we stopped in Boumalne to see the Dadès Gorge.  We hired a grand taxi to take us up there, and the driver was quite a nice guy – stopping many times along the way to show us geographical formations (mountains wrinkled like the palm of a hand, numerous phallic rock formations, views of an oasis, panoramas of Boumalne) and giving us time to take pictures, playing music (including Bollywood!) and laughing at Darren’s antics and attempted sing-a-longs…  But!  Our taxi broke down five times, and it couldn’t even make it all the way up the hill viewpoint when we finally reached the Dadès Gorge.  At least we got to see it somewhat, but it was a bit underwhelming compared to the ride there – maybe it’s better from the top. 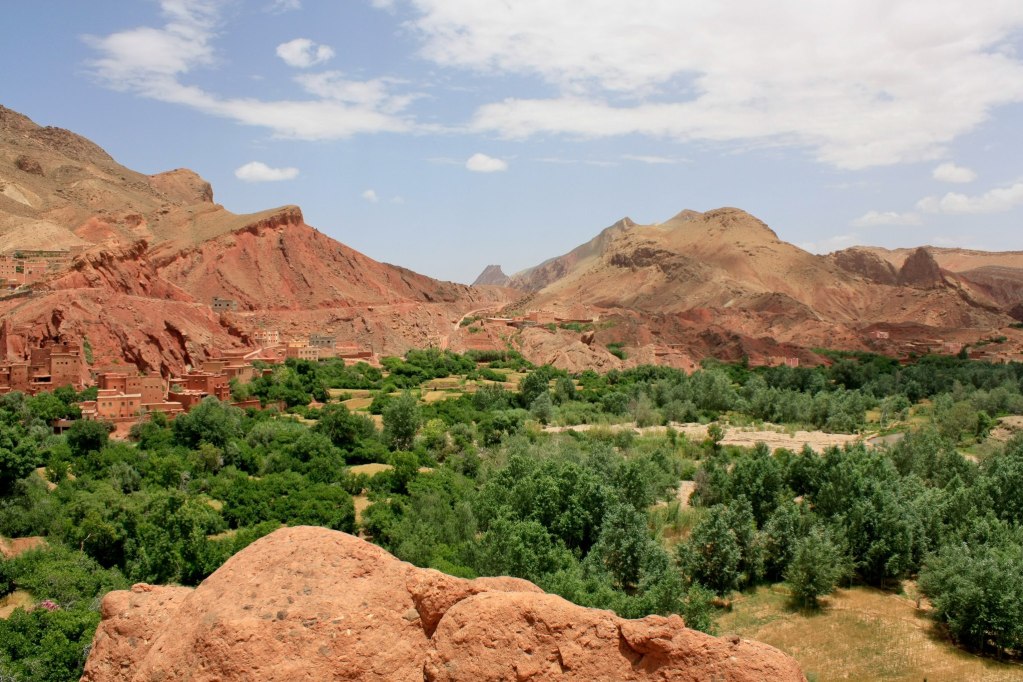 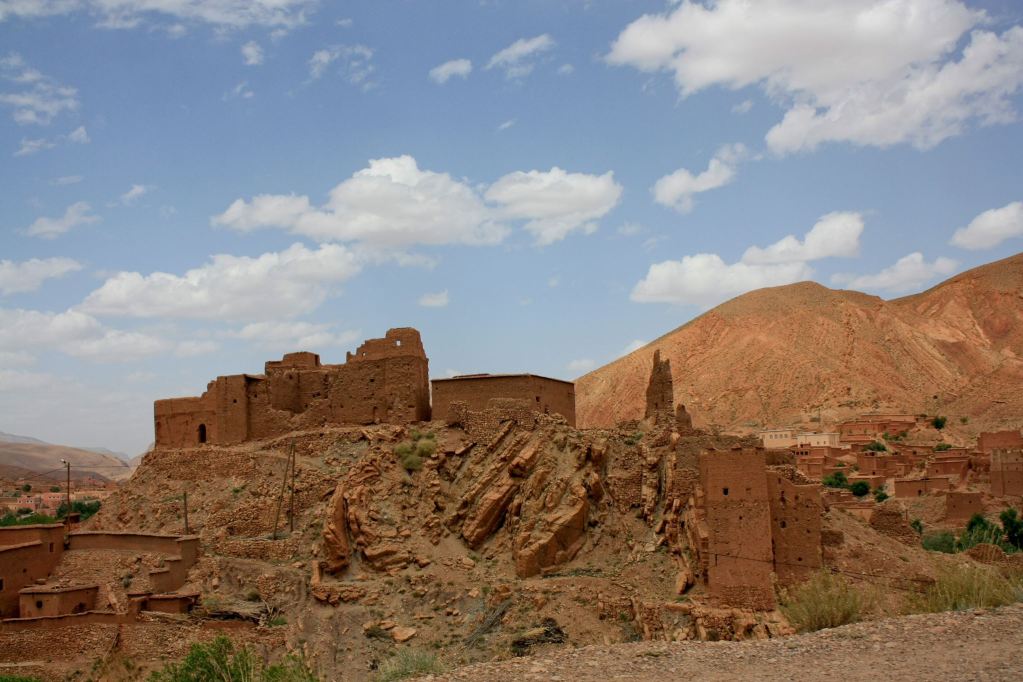 On our last unexpected stop, our driver ran out of gasoline, and had to run one kilometre and back to get it.  Luckily, he stopped right beside a convenience store – Sebastian and Brodie were hungry.  However, the owner only spoke Spanish, so I became the translator while Sebastian bought some cereal, milk, and asked for a bowl and spoon.

In the meantime, the owner, Akshoud, and I struck up a conversation.  When I mentioned that I was from Canada, he beamed and pointed to his TV – he’s seen much of our landscape on National Geographic.  Hah!  He was quite knowledgable, and even probed me a bit about the differences of Hong Kong and China – heh, this guy knows far more than the difference between Chinese and Japanese people!

When I asked Akshoud why he could speak Spanish but not French, when he lives so far away from the Spanish-speaking north, he gave me a bit of his life story: he had moved to Almería, Spain, working illegally in a greenhouse for four years.  The paranoia of avoiding authorities, who tend to check the papers of anyone who looks Moroccan, was constant, and though he evaded capture and deportation, he eventually left, partly due to the economic downturn in Spain and the lack of jobs.  Four years in Spain led him to forget the French that he knew.  His story is not uncommon – for years, there was far more money, jobs, and opportunity for Moroccans in Spain if they kept it on the down-low.  Now, not so much.

But hey, like everyone else I’ve met in Morocco, he still speaks at least three languages – our taxi driver came back and they had an exchange in Berber, which he translated back to Spanish for me.  He told me to come back and chat with him the next time I visit the Dadès Gorge.

Sure, the scenery was beautiful, and I suffered through the whole thing, but what will stick out with me the most in my time in the two gorges is definitely the interactions and conversations.