Yeah…walking around the souks in Marrakech wasn’t my idea of fun, especially after Fes.  Sadly enough, I did not buy anything but a postcard (which I didn’t have to bargain for), let alone wander into more than 3 or 4 shops, in my entire stay in Morocco.  And those shop-wanderings were mostly in Chefchaouen!  I cannot stand being hassled, and I ended up not even trying to buy anything.  So much as a sideways glance at an item would have someone chasing me down the street calling me Japan or even yelling at me in Japanese.

I visited the Palais Bahia, which was pleasant, but after the Alhambra in Granada, any sort of Moroccan-style architectural attraction pales in comparison.

I checked out the new town – yeah, there’s nothing there, not even much shade on the road there to hide from the relentless heat.

But I still liked Marrakech.  There were two factors.

One, the riad hostel – with a pool and a bunch of awesome people around to talk to, I spent most of my time there.  The pool mainly.  Oh, and that rooftop terrace too – the sunset looked great from there. 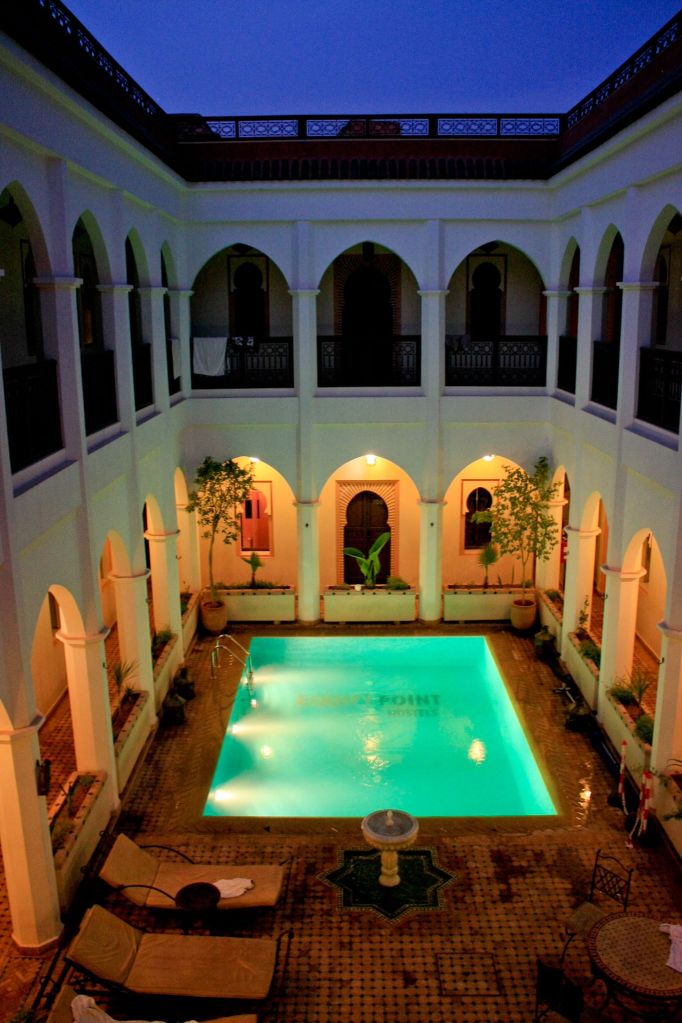 Two, Djemaa el-Fnaa.  The square, the largest in Africa, is a central hub of activity.  In the daytime, it’s not much more than tens of orange juice stands (at 4d for a generous cup, a total treat!) and women painting henna on tourists, but at night, the place explodes.  Music performers, acrobats, a big screen TV showing comedy acts in French, and of course, stall upon stall of sit-down tables and food. 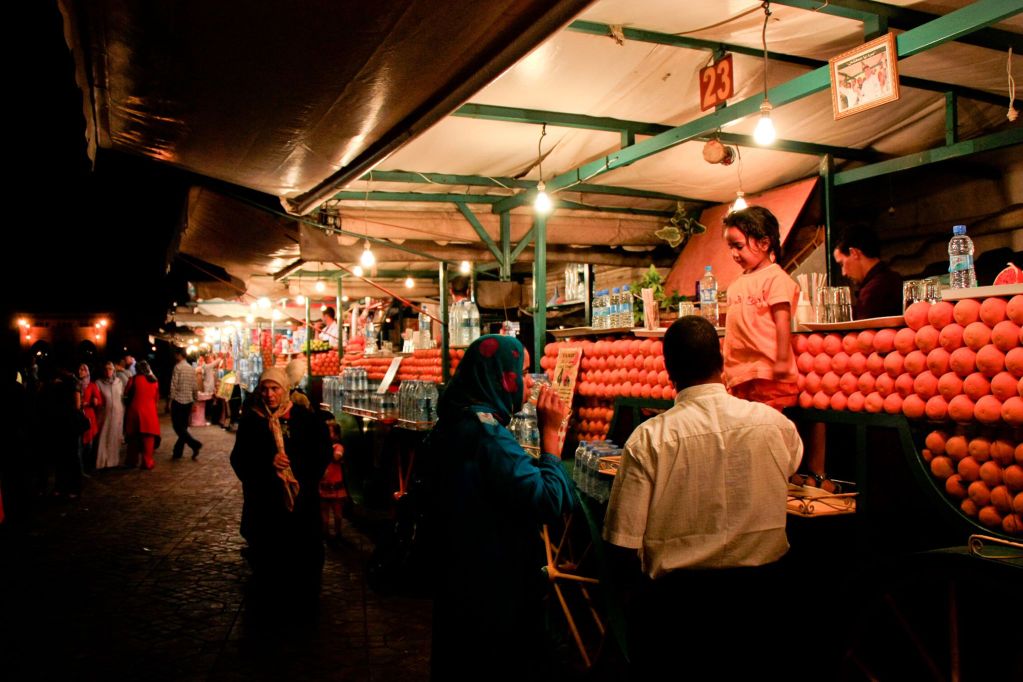 On my second night, I went with Ben (France), Tom (England), and Micha (Netherlands – but also stayed in Singapore and NUS!) to grab some food in the square.  Pretty much every stall has a tout, each acting like your friend, putting their arms around your shoulders, trying to beckon you in… But the best way to know where to eat is to follow the locals.  Wandering over to stall No. 31 felt right – their tout, an old man, was friendly but not pushy, and seeing how packed it was (and with Moroccans, not foreigners) compared to the other stalls pretty much made the decision for us.  I had a wonderful bastilla (baked pastry with chicken and nuts, with powdered sugar and cinnamon sprinkled on top), so good to the point that I returned the next night by myself to eat it again!

Walking around at night in general was nice – no souk touts to deal with, comfortable temperature, things lit up in a different way.  It brings out everyone too – but of course, when everyone is out, it does lead to some strange things…  We saw a lot of kids openly fighting, violently, on the streets and in Djemaa el-Fnaa.  Some girls getting beaten up.  Not too sure what’s going on… Parents eventually stepped in, but the sheer number of incidents we saw was a bit disturbing – usually a little boy, unprovoked, running up to a girl and slapping or punching her, then running off. 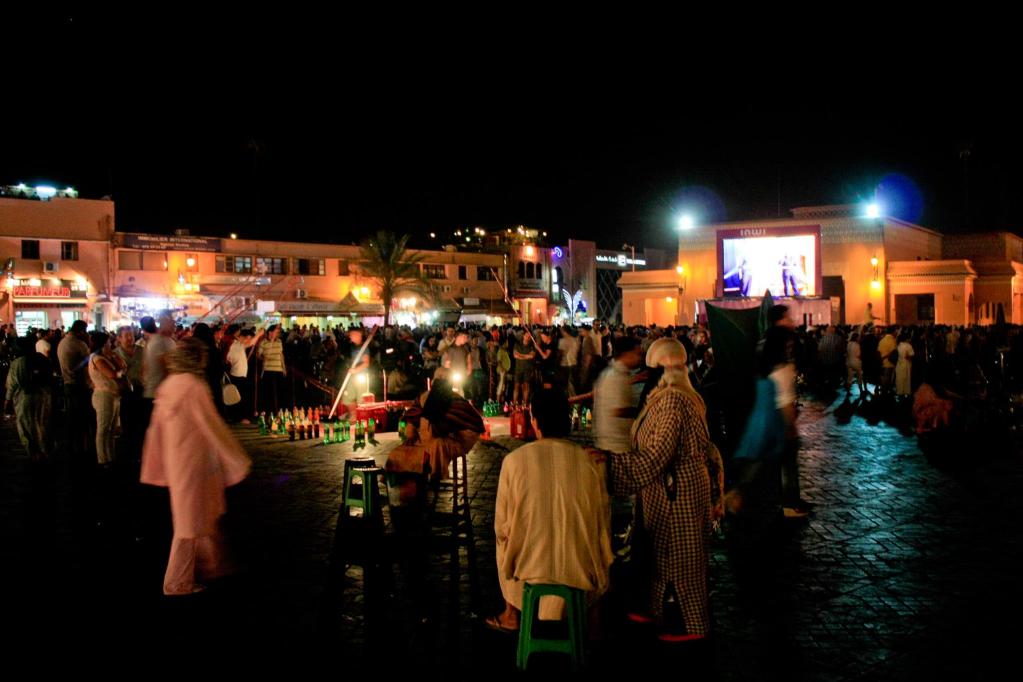 I capped off my final day in Morocco with a visit to the hamman with Ben and Tom (strangely enough, we only got the scrubdown and no “massage”, but I don’t think I’ve ever felt so clean, smooth, and raw in my life), and of course, that bastilla and a merguez couscous.  Delicious.

There’s so much more in Morocco to see (the coast!  the south!  the mountains!), and my time was short.  Still, I’m quite ready to leave – well, my poor recuperating stomach is!  I lost about 5 kg in three days, but gained at least some of it back in the last couple days.  It’ll be nice not to deal with constant pestering and the relentless Japan comments anymore, too.  Not since India have I found my interactions with locals ranging between complete annoyance and complete enchantment.  The best of the lot were candid, genuine, warm, and disarming – the biggest impression I will take away from Morocco.

But lastly, the next time I come back?  I’m bringing with me someone who can drive. 😛