After three consecutive countries that I’ve been to before, it’s time for a new one – Austria!  With two days before meeting Bernhard in Vienna, I made a snap decision to spend a night in Salzburg first.

Aaaand pretty much the moment I stepped into the old town, things started looking a wee bit familiar – an obvious fact that I had completely forgotten about.  A certain movie from the 60s, maybe?

Well, the city certainly doesn’t seem shy about its movie past.  Special “movie-set” tours are available and advertised everywhere.  (Surprisingly though, Bernhard tells me that the movie isn’t famous in Austria.)  And even if they don’t advertise…

Soundtrack not necessary if your brain does it for you while you’re traipsing around town in those familiar settings.  Or if your hostel seems to play the movie every night. 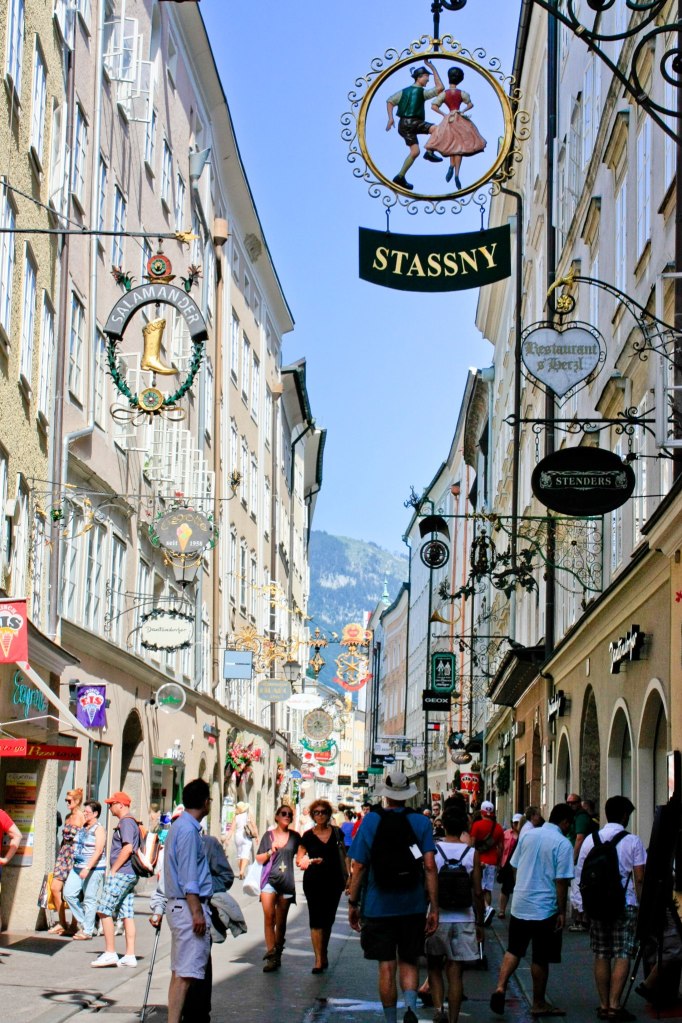 Okay, Sound of Music or not, the city is beautiful, with a river running through, splitting the city centre into an old town and a shopping district.  The old town is set spectacularly below a large hill, where a fortress (and yes, “that” monastery) looms.

Unfortunately for me, the beer habit seems to have followed me out of Germany.  After a long walk around town, I settled inthe Augustiner Bräu beer garden – though to be fair, I think that’s a German beer…  I think I’ll stop now…

But fortunately for me, the endless loop of the soundtrack in my head was pushed out due to a two-day music festival in town, with some excellent bands playing funk and throwback.  The city, especially the pedestrian shopping district, really comes alive at night, with all the stately buildings beautifully lit up. 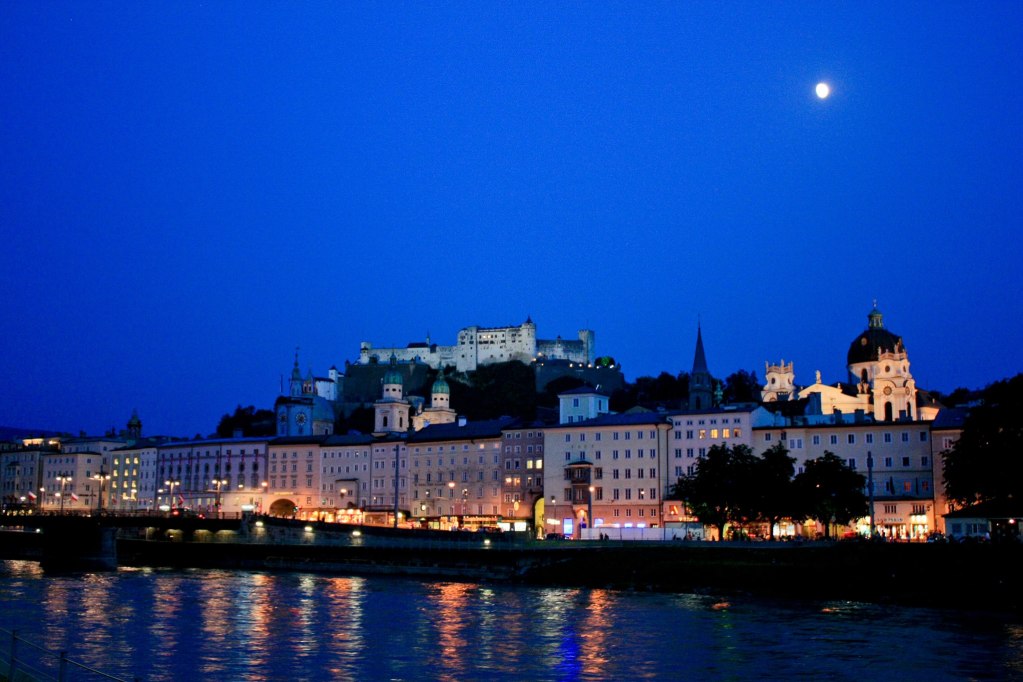 The next day, I headed to Hallstatt – a recommendation from Bernhard after I mentioned that I’d like to see less cities and more nature.  Shortly after he suggested it to me a couple months ago, Hallstatt made world news.  A small town…so beautiful that someone in China decided to copy it, building a $95-million exact replica – churches, buildings, houses, and all – in Guangzhou.  That’s slightly disturbing…but made me even more curious about the original.

Taking a bus, train, and boat to Hallstatt, on the final approach, it was pretty easy to see why.  (Also, sure enough, plenty of Japanese and Chinese tourists who I guess now no longer have to travel this far to see Hallstatt…)  It’s a quaint, picturesque village on its own…but its setting right at the base of a mountain and right at the edge of a lake, with other mountains and valleys in sight, pushes it to amazing.  It may very well be one of the prettiest towns I’ve ever had the pleasure to visit.  (Not even bad weather, numerous tourists, or a rude hostel owner could take away from the experience.)

The town is tiny, but I must’ve walked the whole thing, backstreets and all, like 10 times just because I enjoyed it so much.  I took a dip in the lake, sat and enjoyed the view for a few hours, and hiked up the mountain (the site of a former salt mine, one of the first in the world), and even when a heavy downpour started, it was still beautiful.  With the lake and topography affecting the weather, watching low clouds wisp around the mountains was mesmerising.  Even after the downpour ended, I sat around awhile just watching the lighting change on all the surroundings.

Despite the many visitors, there’s a certain peace to the town, one that everyone respects.  I wonder if the replica can capture this, let alone the real setting: the mountains, the lake, the trees, the clean air. 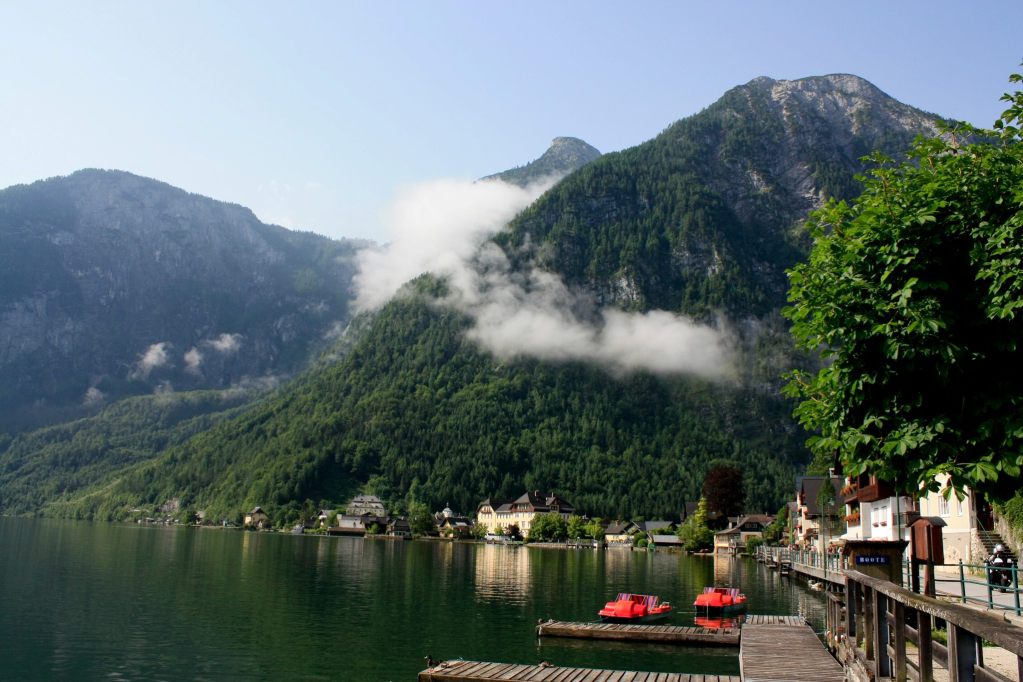 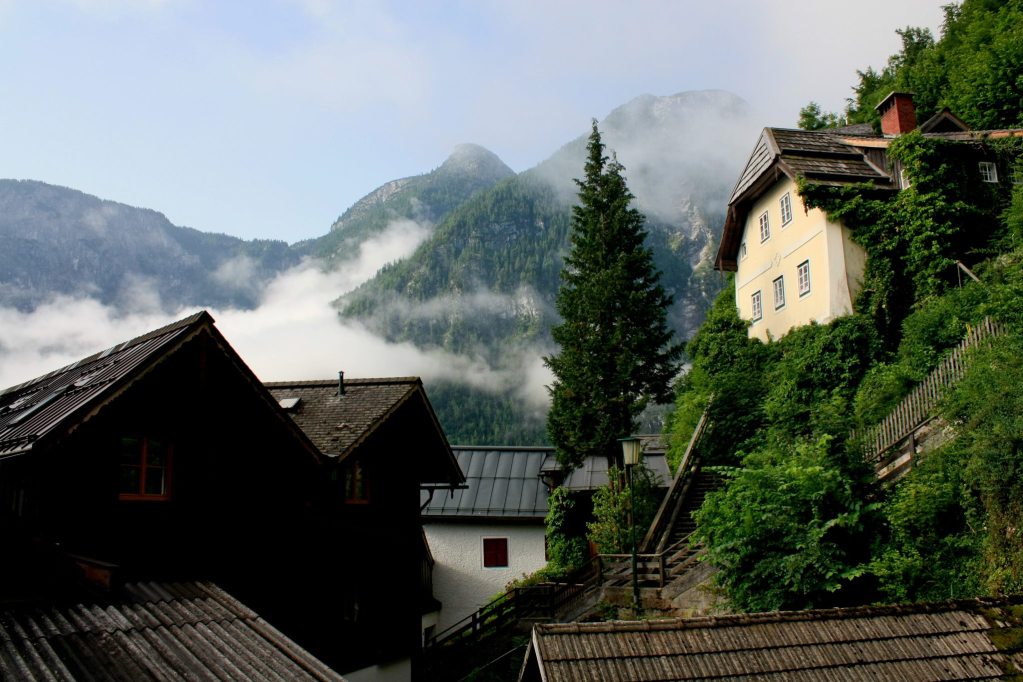 I did take a break from the peace though – I hopped into a bar to watch the Spain/Italy final.  (Meaning…sigh, another beer.)  Whoooo Españaaaa!

In the evening and early morning, the place really turns quiet, and the peace is absolute.  The air is crisp, the clouds hang low, and it’s just wonderful.