Given the sheer number of friends I happen to have in Germany (all from our time in Singapore a year and a half ago!), I dedicated a lot of time here, and left planning to the wind.  (Well, sort of – none of the plans I made in advance came to fruition.)  To be honest, I didn’t expect too much other than hanging out, but I’ve had such a lovely time that it almost hasn’t felt like I’ve been travelling.  (And the same feeling was for Paris and Switzerland, but I’ve spent almost two weeks in Germany now!)

After taking a mitfahrgelegenheit (a paid carpool of sorts, interesting cause you’re stuck in a car with strangers and end up having pleasant conversations) from near Zurich, I headed to Karlsruhe to meet up with Sabine.  My first night in Germany?  Heading to a public viewing set up for the Germany/Denmark football match.  Also, I had my first beer ever!  Yeah, I know that’s pretty hard to believe, but I had never had a beer before coming to Germany this trip.  Sabine introduced me to a radler which was pleasant…but since it was my first, I couldn’t quite tell if I liked it yet.  Didn’t dislike it though!  But this really set the tone for the rest of my stay in Germany – watch football matches (usually in public with a flag-waving crowd), drink beer. 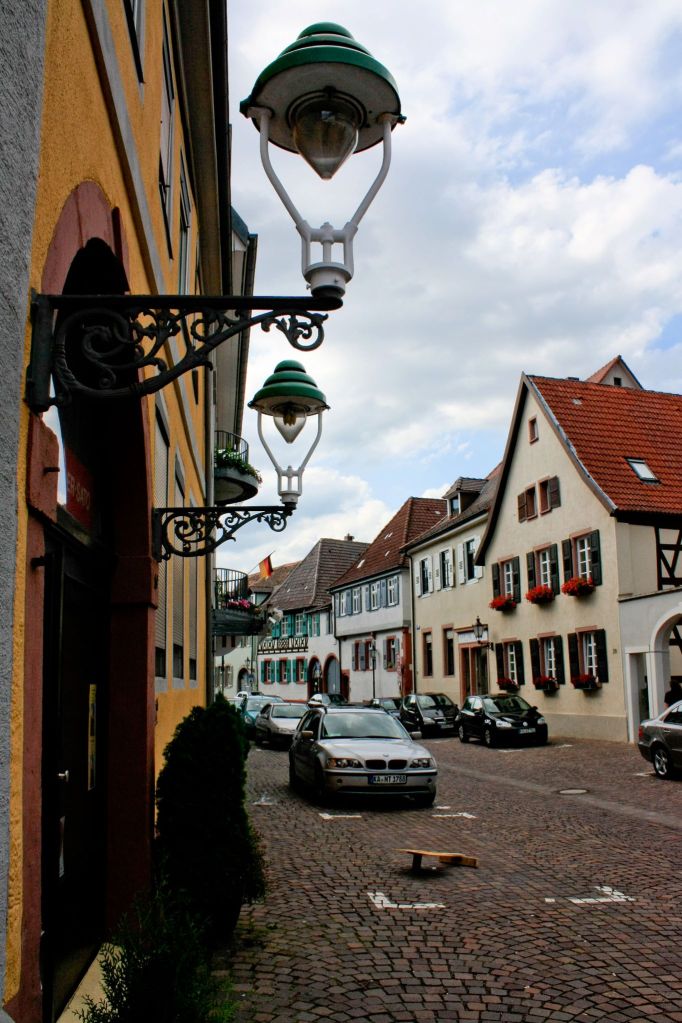 I noticed quite quickly the change from Switzerland to Germany – no, it wasn’t the scenery.  It’s the flags, or rather, the lack of them!  Switzerland had plenty everywhere.  Germany still seems quite self-conscious about being seen as nationalistic, given its rough history.  I think a bit of patriotism is nice though, and I was glad to see it out in full force during the football matches.

After a day where Sabine gave me a tour of Karlsruhe (a non-touristy planned city where I kept pointing to things and calling out, “That’s so German!” to the chagrin of anyone around me), I headed with Sabine and her friends to check out Heidelberg, a touristy but very pretty (and very German-looking) small city with a castle overlooking it. 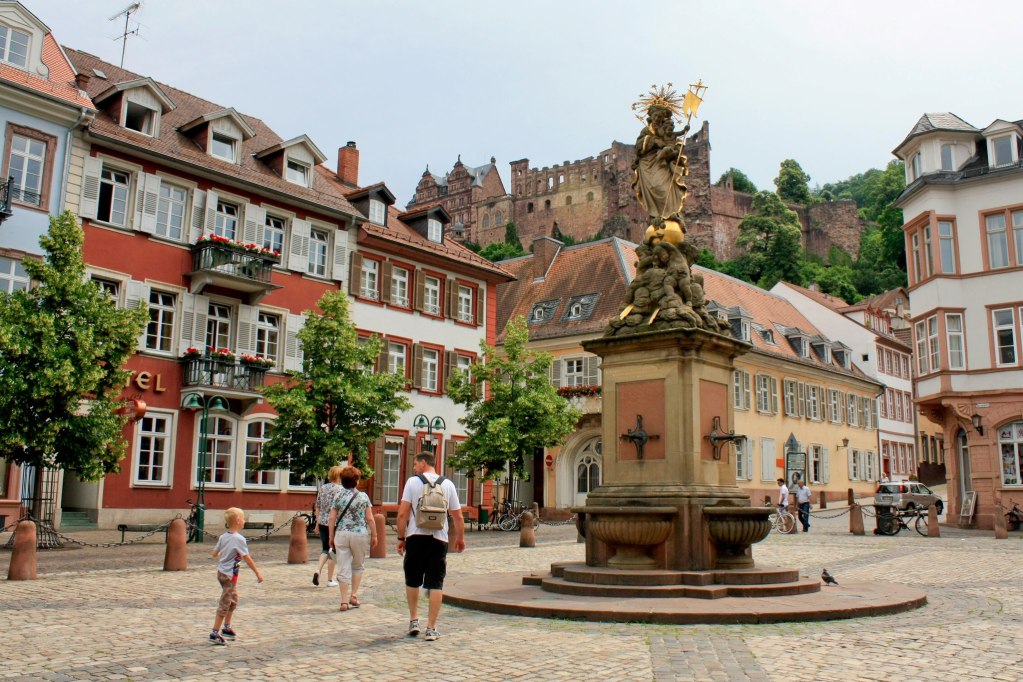 Sabine’s flatmate was driving to Cologne the next day, and with several unexpected extra days in my schedule before meeting Alex in Stuttgart, I decided to tag along and explore on my own for a few days.  Back to hostels, back to travelling mode!  Cologne is most famous for their Dom – a cathedral that used to be the tallest building in the world!  It dominates the skyline so much, you pretty much can’t not see it unless you’re facing away from it.  I also made a daytrip to Bonn, the birthplace of Ludwig von Beethoven – despite Beethoven having openly expressed his dislike for his birth city, Bonn reaaaally seems to claim their favourite son.  Back in Cologne, I went to a large public viewing of the Germany/Greece match and reunited with Marc.  Watching the relative thrashing Greece took in that match, in the backdrop of the Eurozone crisis…well, good spirits all around, but boy did the crowd love it! 🙂 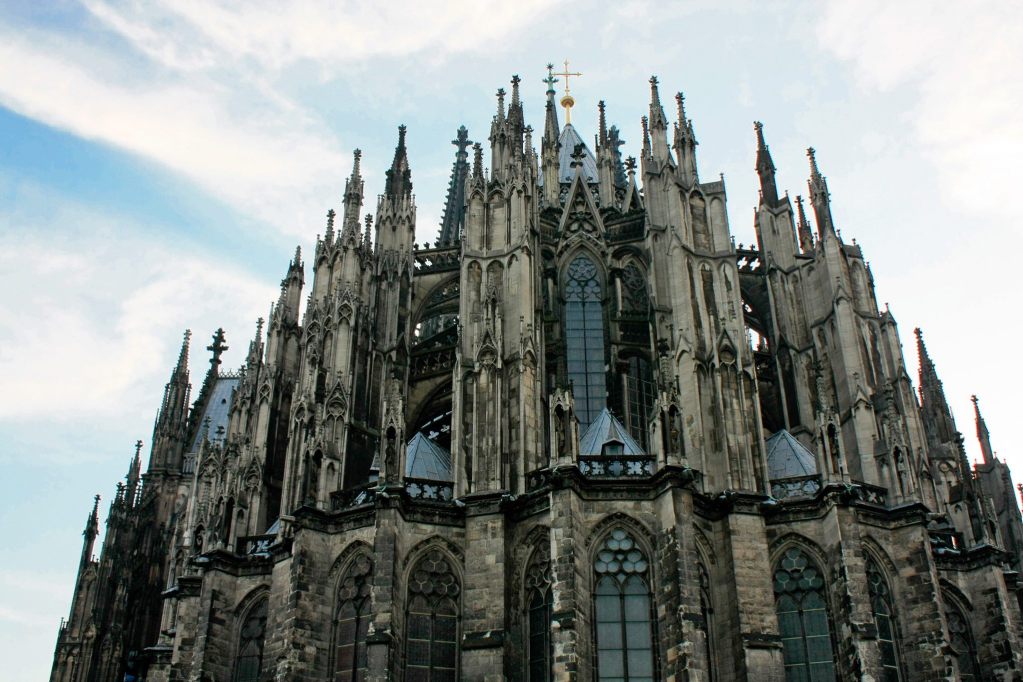 But in Cologne, when I found myself with one potential extra day, was where I had a bit of a crisis of travelling: trying to do too much.  Being so close to the Netherlands made it very tempting to go.  Never mind being unable to find hostels or a Couchsurfing host in time, I was still quite determined to go!  I wasted hours trying to make contingency plan after contingency plan, and even considered Belgium and Luxembourg, and making the whole thing two or three days.  But I had to remember the purpose of this trip – visiting friends.  As much as seeing those countries would be nice, I’m glad I made the decision I did to skip it for now, because it gave me more time to hang out with my friends in Stuttgart and Munich, and also to get to know those areas a lot better.  Also, trying to see too much in too little time, I most likely would have been left unsatisfied and spending a lot of money moving around between cities.

In Stuttgart, I arrived a night ahead of my friend Alex, who was out of town, but his roommates graciously let me in anyway.  Another football match, another beer – my first non-radler.  Hey, not bad!  Oh whoops, finished a whole bottle…that wasn’t supposed to happen!

With Alex at work and school, we met up in the evenings and I had plenty of time to explore Stuttgart and two surrounding towns, Ludwigsburg and Esslingen.  Stuttgart was heavily damaged in World War 2, so the buildings that were built during its reparation are admittedly bland – the towns of Ludwigsburg and Esslingen were much more scenic and I spent far more time in each than I anticipated.  Still, Stuttgart itself has plenty to offer – the Mercedes-Benz Museum and the Porsche Museum in particular!  I hate driving (and I probably can’t even remember how to drive by now), but I have to admit that fancy expensive cars can be pretty sexy. 😛  The Mercedes-Benz Museum was particularly well-done, showing the history of the automobile (simultaneously invented by Benz and Daimler), amongst the backdrop of world history and wars. 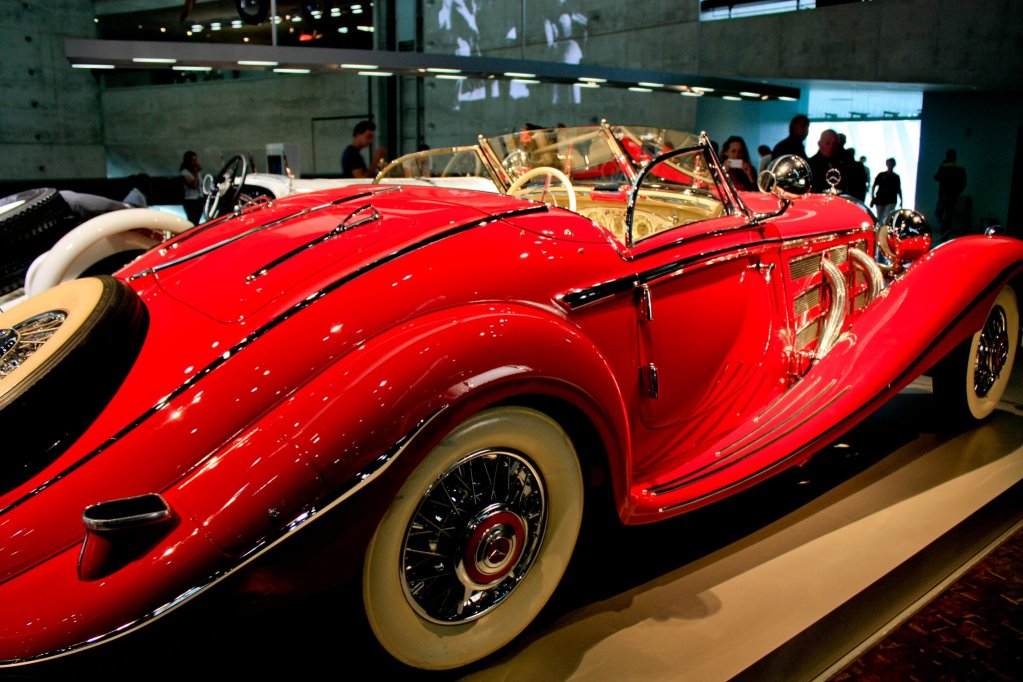 My last stop in Germany for now (I’ll be heading to Berlin later) was Munich, where I reunited with Johannes, who was free enough to give me a city tour as well.  Prettiest city hall ever!  Pretzels, weisswurst, and delicious weissbier for breakfast!  (Yes, beer for breakfast – beer is considered such a life essential here that it’s tax-exempt.)  And yes, people actually walk around in lederhosen.  Some.  It’s Bavaria.  The Olympic Park was architecturally appealing but also quite poignant – the 1972 Olympics, which Munich hosted hoping to move West Germany from the giant shadow of the Holocaust (hey, note how many years after the war this was), was marred by the terrorist kidnapping and killing of several Israeli athletes.  The Olympic games had to continue despite it.  The dark past is something locals seem to be able to joke about, but it seems that the country is forever trying to atone for it.  I’d say Germany has gone above and beyond, and I’d hope one day they can move on enough to not be shy about their pride in their country. 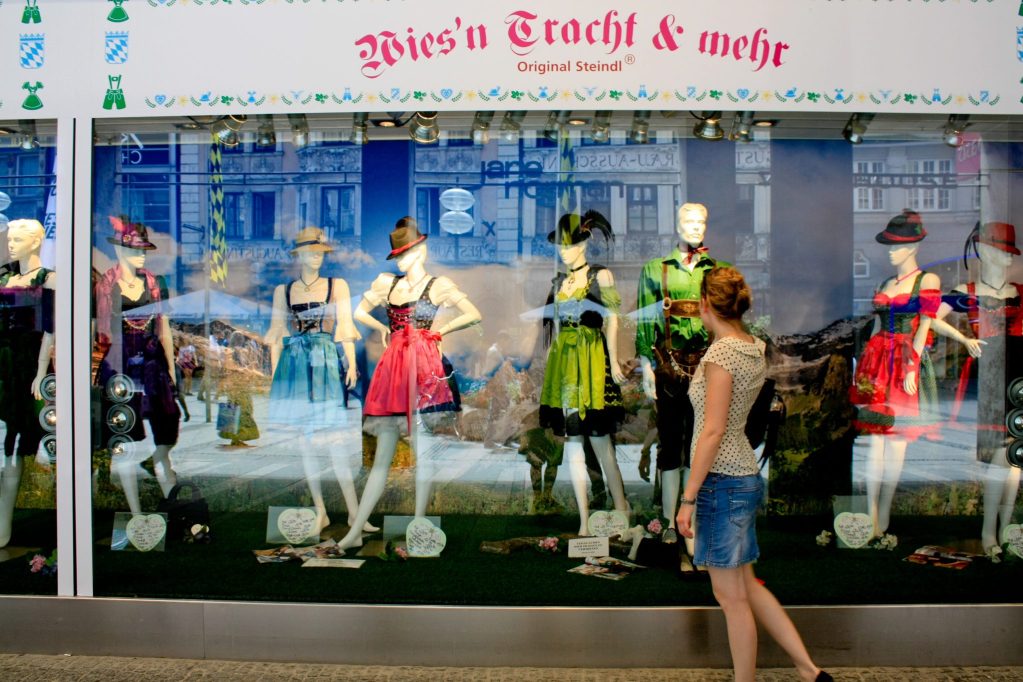 One more football match – Germany/Italy, in the Hirschgarten, one of the largest beer gardens around.  One litre of beer…yikes!  (I think it took me over two hours to finish!)  Hey, despite the loss, everyone seemed to take it well.  The crowd certainly seemed proud of the team’s efforts in the end! 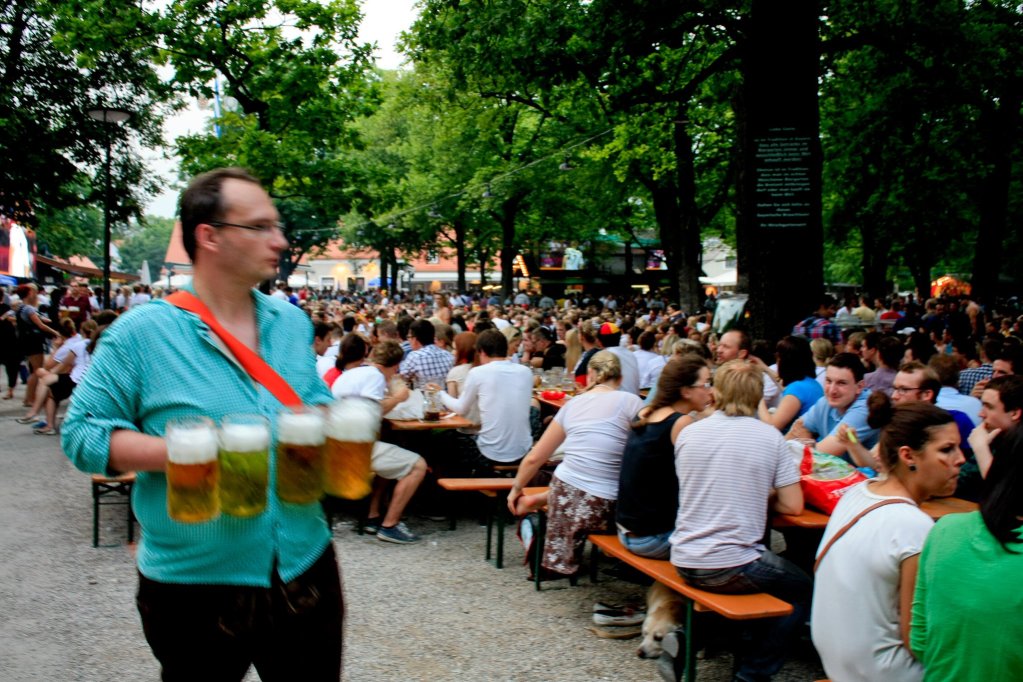 On my last day, I visited the Neuschwanstein Castle – known widely as an inspiration to Disney – near the town of Füssen.  Kitschy inside, yes, but undeniably beautiful, and stunningly set in an Alpine mountain overlooking lakes, villages, and the very green countryside.  I wish I had even more time to explore the surroundings.

Despite all the unexpectedly wonderful sightseeing I’ve done in Germany, and the fact that I found appreciation in things I generally avoid (cars, football, beer), it’s easy to say what I will treasure most: hanging out with friends again.  Cooking a meal with them (or at least standing around fruitlessly unable to help).  Joking around.  Barbecues, eating outside, soaking in the atmosphere with them over a beer.  Not talking about travelling.  Walking in the park and having an actual conversation between familiars.  Talking about nothing.  Hey, even just sitting around in their flats not talking, but just relaxing or watching TV or something.  In other words, feeling normal.  Sabine, Marc, Alex, and Johannes – I thank you all again for hosting/spending time with me and for introducing me to friends and family, and I hope to see you all again very soon!

But at the same time, my normal also includes travelling (but it also includes stopping once in awhile).  I feel refreshed and ready to continue – though there are a few more reunions left along the way.  Next stop, Austria!