On my way to Macedonia’s crown jewel, Lake Ohrid, I decided to make a little pit stop in Bitola for a look at the country’s second-largest (though still pretty small) city.  Well, our bus itself took a long pit stop on the way there – there was an accident in front of us on a small road, with not enough room to u-turn.

At least we were stuck in some pleasant scenery.  Being the only non-Macedonian on the bus was a little bit strange at first.  As our bus stood waiting on the road, some of us went in and out to see the accident or just to get some fresh air.  After a long time, a younger looking man, Antonio, struck up a conversation with me, curious as to what I was doing in Macedonia.  He spoke some English – not great, but enough for me to understand kind of what he wanted to say; so we kept our conversation topics pretty basic.  I appreciated the effort but I felt bad that I wasn’t able to reciprocrate in his language (or any of the other ones he speaks better – Albanian and Turkish.  They have to learn a lot of languages in school!  On multiple occasions when he wasn’t certain, he called his girlfriend, who spoke better English and also computer access to Google Translate!  Aww.

Antonio lives in Prilep (another more notable city in Macedonia), and works in the biggest industry in the area – in one of the many tobacco fields, which he later pointed out to me.  (He doesn’t smoke.  Besides, he’s 17.)  He graciously offered me an apple and a peach, fruits commonly grown in the area.  He truly loves his country and what he calls the laidback, relaxed culture, and despite the language barrier I could hear him gush about the hiking and camping he does with his friends in the many mountains in the area, about the landscape, everything.  It’s quite a scenic area, too – we were stalled 10 km from Prilep and it was visible; it’s sort of cradled by the mountains around it.  When the bus finally got going again after two hours, he gave me a quick introduction to his city as we drove by, before he finally got off and said goodbye.  I’ll have to make a full stopover there next time I’m in the country – which I like so much that a return may be in order!

I’m actually glad the bus got delayed.  That was an unexpectedly fun afternoon.

Despite arriving in Bitola in the late afternoon, I only stayed until slightly after noon the next day.  Cafe culture is really huge here.  It was a weeknight and a weekday, yet the streets were packed in evening and again by late morning the next day.  People are dressed to the nines!  But given that so many people just sit and let the hours pass, even during weekdays, I’m starting to see some of the sad truth about that unemployment rate…  Still, the atmosphere is nice, the one street lined with shops and cafes almost Western European-like in architecture, and it’s not hard to get caught up in the people-watching.  I tried a local specialty loosely translated as “cheese in the oven” – a pot of ham, mushrooms, and a blend of two cheeses melted in the oven and served with thin, pizza crust-like bread.  Mmm.

There’s not too much more in Bitola, it’s more of a place to soak up the atmosphere and see how Macedonians chill out, watch people jog in the park, kids play in a mini amusement ride area, have a drink or two…  Their bazaar is much smaller than Skopje’s, but slightly more atmospheric.  The one big touristic point of interest, however, is the ruins of the ancient city of Heraklea, a short walk from Bitola.  It’s still an excavation site, and a relatively new attraction, but the theatre, streets and drainage infrastructure, building foundations, and best of all, the floor mosaics are amazingly well-preserved.  Well, discovered as well-preserved, at least.  I think they need to put some barriers and pathways up, since other visitors were trodding all over the whole thing…

My final stop in Macedonia was Ohrid, probably the only place in Macedonia you could call “touristy”.  Most of the crowd is Macedonian, although there’s some Albanians (despite the fact that 1/3 of Lake Ohrid runs into Albania, and you can literally see the country from Ohrid), Greeks, and Italians around.  Hey, I don’t blame them – the lake is huuuuge and really, really pretty.  The crowds didn’t detract from the view.

On my first afternoon, I walked around the old town, built on hilly terrain leading right down to the lake.  Various churches pepper the area, the most famous and picturesque of all being the St. John Kaneo church, perched on a cliff directly looming over the lake.  The Samuil fortress sits at the very top of the town, overlooking everything on all sides.  And all along the shores of the lake, pebbly beaches – tiny enough, but completely packed with people!
It’s nice to see how a country with such a relatively small population lets loose. 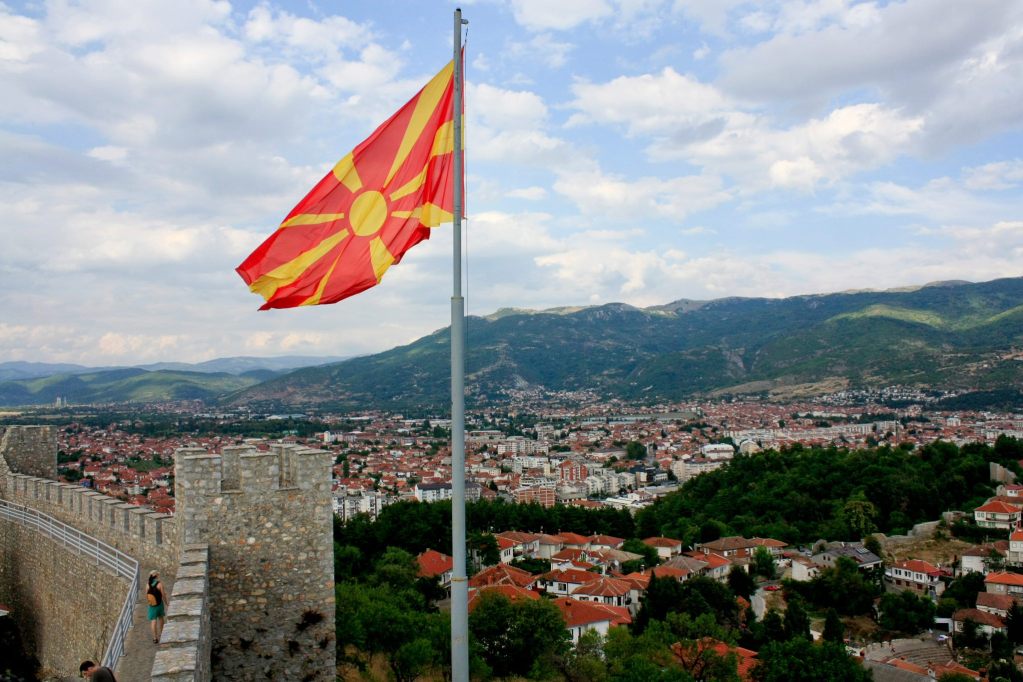 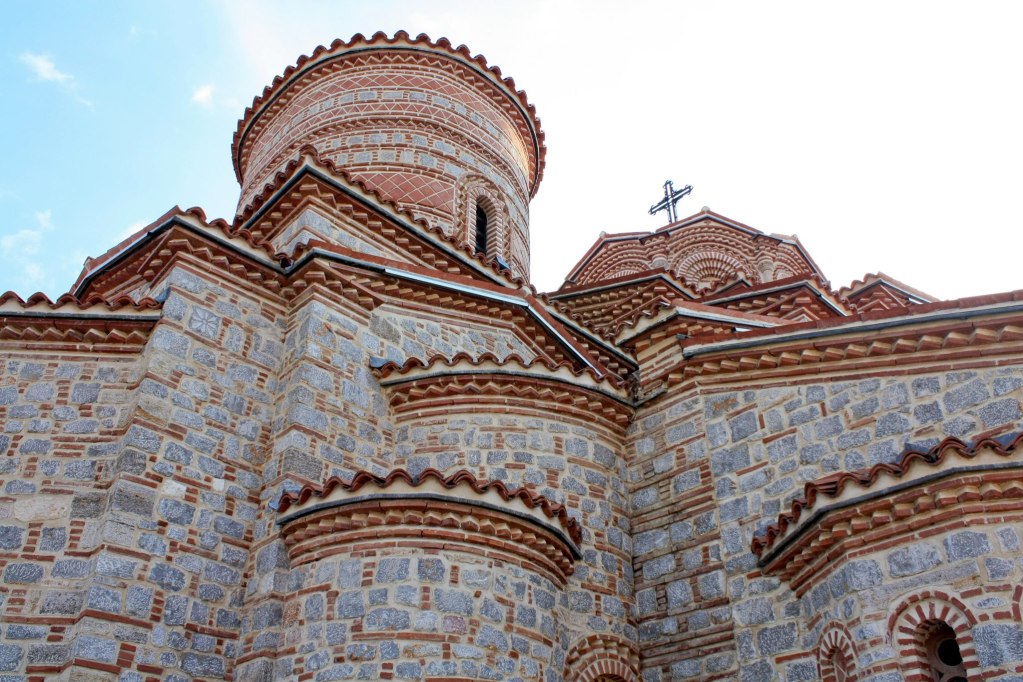 I met three girls in my hostel: Imogen (Australia) and Janja and Nina (Slovenia), and we spent the majority of the next day doing what most people come to Ohrid for: relaxing in the lake.  We found a somewhat secluded beach and settled there, although a small crowd amassed later.  The water is so clear and so refreshing… With my ear healed and my finger a little bit better, I threw caution to the wind and jumped in as well.  Of course, we all jumped out of the water when we saw a (harmless) snake swimming near us…

Within the town centre is a pleasant lakeside promenade and a shopping street – both got even busier at night, but never unpleasantly crowded.  It’s interesting to see the attractions that appeal to Macedonia’s tourist population though – I found it a bit sad!  Two lions walking in circles in a tight cage attracted a big crowd.  Little tiny amusement park rides, a little train that went around in circles about the size of two coffee tables…  I suppose this country hasn’t seen too much of the extravagance of the west, or of course any wide acceptance of animal rights.  Seems like the signs of a burgeoning young country that’s been through a lot, and has a ways to go.

I was sad to leave Macedonia after just four days, but I didn’t feel I had enough time or patience to go hiking or looking for monasteries – short of hitchhiking (too time consuming, and it’s something I admit I’m still a little uncomfortable about for larger distances), it wouldn’t have been possible as I can’t rent a car.  And I definitely could’ve stayed longer at Ohrid – that lake is just too relaxing!  And I could’ve headed to Albania (just down the road), but I wouldn’t have had enough time to do it justice.

But there’ll definitely be a next time!  I’m already happy to have returned to the Balkans for a second time on this trip, and I’ll definitely be back to fill in the gaps and revisit Macedonia.