I’ll admit I knew absolutely nothing about the Republic of Macedonia (Republika Makedonija with a hard “k”, not a soft “c”) before coming.  Well, other than the fact that Greece disputes their name, causing them to be admitted into the UN under the clunky provisional reference name of “former Yugoslav Republic of Macedonia” (“FYROM” for short, pronounced like “fee-rom”), over the claim that most of ancient Macedon lies in current Greece.  Oh, and I knew Macedonia’s flag – unique in design, one of my favourites around cause looking at it just makes me happy.

But I came here because of my Schengen area restriction.  As a Canadian, I’m only allowed to travel in the Schengen area (the shared customs zone that encompasses much of Europe, where you can cross borders without having your passport checked) for 90 days within a 180 day period.  There is no option to extend this short of applying for school or residency.  With Sweden now on my itinerary as well as promises to meet people in France and Spain, all of which would use up the rest of my allowance, I needed to stay outside of the Schengen zone for at least a few weeks.  Turkey was supposed to be my remedy for this, but with no desire to stay there, I opted to head to a nearby non-Schengen country.  Back in Israel, Bernhard suggested Macedonia…so here I am!

To fill in the gap in knowledge, I tried to do a little more research…but ended up solely focusing on the Greece dispute, which borders on ridiculous on both sides to the point that it’s preventing Macedonia from joining the EU and NATO.

More about the name thing: countries sit in the UN in alphabetical order.  Macedonia isn’t seated under “M”, since Greece objects.  Nor is it seated under “F” since Macedonia doesn’t want to be thought of as “Former Yugoslav” with a capital “F”.  They’re seated under “T” for “the” (as in “the former Yugoslav…”), which isn’t even in their provisional name.  Oy vey!

The word “Macedonia” and “Macedonian” also confusingly refer to a bunch of things.

The current flag of Macedonia is actually not the country’s original choice.  The original, which is still flown around some places, is red with the 16-point Vergina sun on it.  Greece objected, since Macedonians in Greece fly an identical flag that is blue, and threw up economic blockades in protest.  Macedonia relented and changed their flag to the current one – which I think looks cooler anyway.

There’s way too much more to this, I’ll leave you to hours of Wikipedia research of your own if you wish.  I still didn’t end up with any knowledge of the country as it is now!  Enough of all these technicalities, I’ll get to the actual experience of travelling in the country.

I arrived in Skopje, the country’s capital around 7 am, a 12 hour journey via Greece (wasting one Schengen day despite driving straight through…sigh) and a one-hour time change backwards from Istanbul.  Despite being tired, I was eager to see a city I also knew nothing about, nor even knew how to pronounce at first (it’s “scope-yay”).  Walking into the centre, it seemed that EVERYTHING was under construction!  Both sides of the Vardar River, running through the city, full of new construction and renovation projects – new grand buildings (museums?), a new bridge with a ton of unfinished statues, revitalisation of the pathways… it wasn’t particularly pretty now, but I can imagine that it’ll become one of the most interesting riverside promenades in Europe in a few years time.  The contrast between it (or what it will be) and the drab, imposing communist-era buildings around is quite something.  Makedonija Square, the big hub, already seems finished, with a giant open area and one of the largest, impressive fountains I’ve ever seen…but it’s a giant fountain with a statue of Alexander the Great.  Not helping in the naming dispute.  (Alexander the Great was a former king of Macedon, associated deeply with Greek Macedonian culture as well.  Skopje’s airport was renamed after him recently, which only sparked more tension.)

Everything changes pretty quickly once you’re out of that area, though.  As I passed the Mother Teresa Chapel – she was an ethnic Albanian born in Skopje back when it was part of Yugoslavia – the buildings become more communist.  I headed to the Skopje City Museum, which movingly detailed the near-complete destruction of the city during an earthquake in 1963.  The city’s been reconstructed well, but it still somehow looks like the photos and video footage of the city pre-earthquake, surprising considering the style of the buildings. 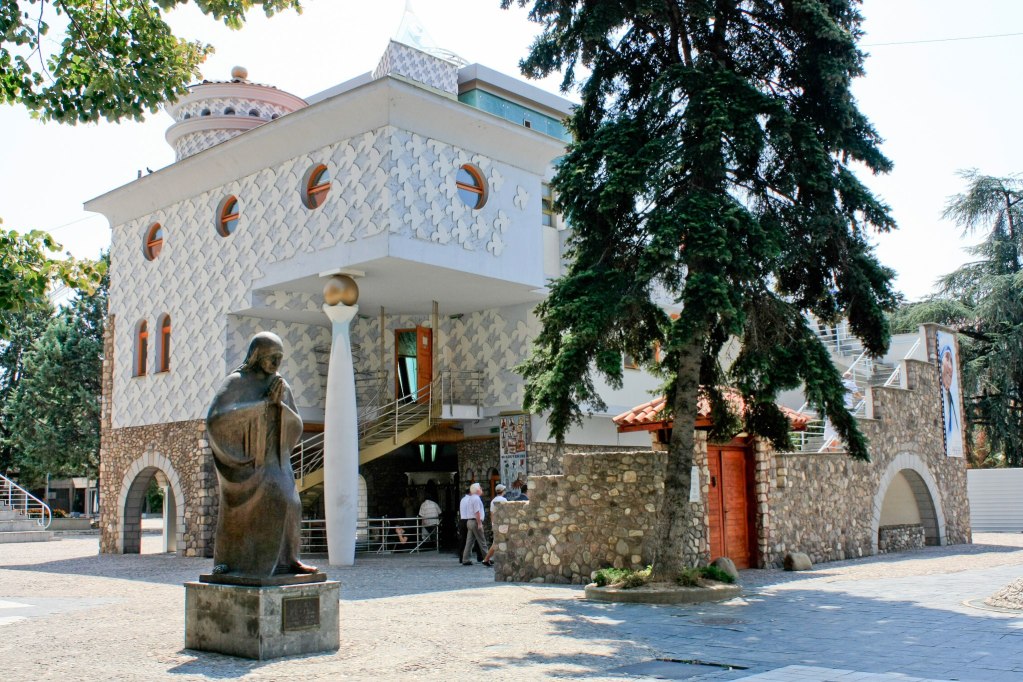 Walking around as a clear foreigner brought rather strange reactions.  The first person I encountered that did have a reaction did a patronising “Yooonnngg!” sound with hands pressed together.  Most others that reacted just sort of looked surprised to see me walking around and smiled.  Some said hello even when I was facing another direction, catching my attention…then when I turned around, they had nothing to say, offering a wave or a smile.  I’m guessing they don’t see too many tourists here.  For the most part though, people are able to speak at least passable English, which was a pleasant surprise.  I was the only person in a restaurant for lunch, and the owner was extremely accommodating, though shy about his English.  (I have to say though, Macedonian radio, at least the station playing in the restaurant, plays good English music, with bands I like that don’t even get airplay in Vancouver!  My hostel was also blasting some good music.  Closet hipster country?)

I went through the Old Town – nice streets, but most shops were closed since it was a Sunday.  The bazaar sold the typical random knick-knacks, counterfeit DVDs, and fruits and vegetables – it seems that hot peppers are very very common here.  Feeling a little bit off-put by all the stares I could just feel, I headed out of there pretty quickly to the Kale (fortress), set on a hill overlooking the city.  The walls are preserved well, but not the rest of the grounds.  Mysteriously, the groundskeeper let me (and other visitors) in…but despite a clear, unblocked and perfectly normal-looking pathway, only let us walk about 50 metres in and wouldn’t let us get close to the walls or turn to branching paths, all of which also looked very structurally sound.  Ah well. 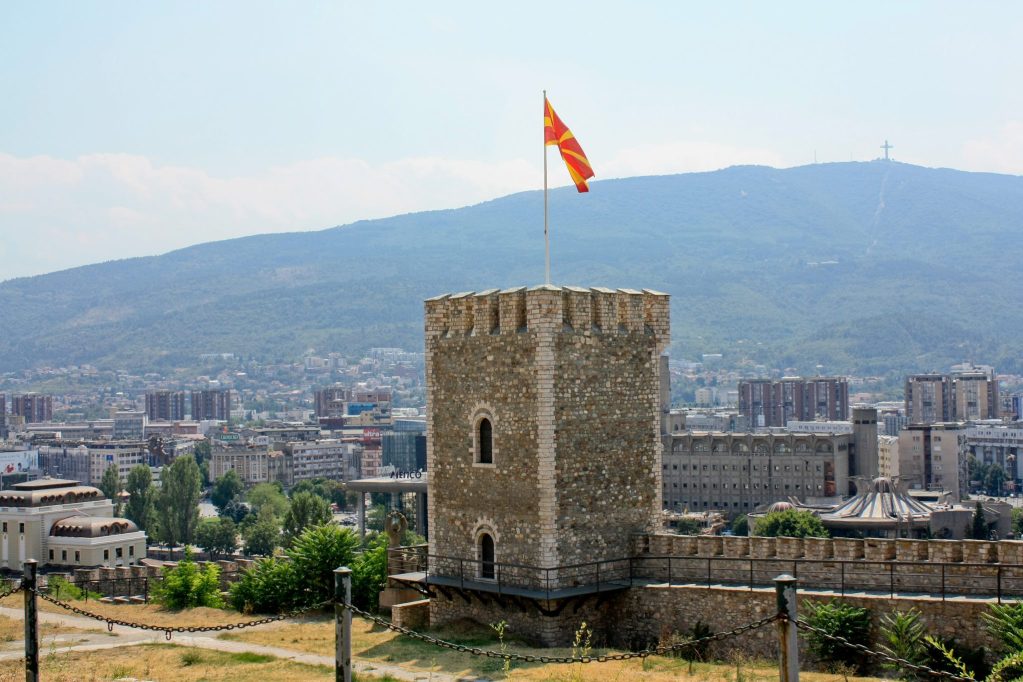 After a long walk winding through town (and passing the utterly bizarre-looking Central Post Office that resembles some sort of 31st century spaceship built with communist concrete), I returned to the hostel exhausted.  However, two guys from the hostel, Yannick (Belgium) and Ben (Australia), were looking to head to the nearby Lake Matka and wanted to share a taxi.  Originally, I was planning to go visit Matka the next day, but opting to just jump at the opportunity and save a little money and time, so I joined them.

The taxi driver was a very friendly man who Yannick engaged in conversation.  (Again, fluent English – they learn Macedonian, English, and one other language of their choice in school.)  The job situation isn’t particularly great in Macedonia.  He told us his story of trying to work in Germany – an unsuccessful battle given that he doesn’t speak German fluently.  Apparently this isn’t an uncommon thing for Macedonians.  There are a ton of casinos in Skopje alone – walking around and driving around, it felt like there was one on every other street.  According to our driver, many people spend all their time there, damaging their living situation further when they don’t have jobs in the first place.  I later found out that youth unemployment is not insignificant either – every day, the streets are flooded with young people sitting in sidewalk cafes.  It’s a pleasant atmosphere, but the circumstances that lead to it are unfortunate.

Yannick delicately asked about the name dispute, whether the driver thought that Macedonia would change its name anytime soon.  He flatly said no, saying something along the lines of “Greece has enough history for itself anyway, just give us the right to have our own!”  Heh.  Proposed names for the country include “Upper Macedonia”, “Macedonia-Skopje”, and “New Macedonia”.  I think the stalemate’s just going to continue indefinitely… According to polls, most of Greece doesn’t even want the word “Macedonia” in the name of this country.  Nearly all of Macedonia rejects the idea of changing their name from Republic of Macedonia.

We arrived at the lake around 30 minutes later.  As it was Sunday, it was pretty crowded with locals, but it didn’t detract from the beautiful surroundings – a river running through a tall, lush valley, dammed to create the artificial lake of Matka.  While Ben decided to go for a swim, Yannick and I joined a boat tour that took us 20 minutes down the water to a small but interesting cave of stalagtites, stalagmites, and a little lake and spring inside. 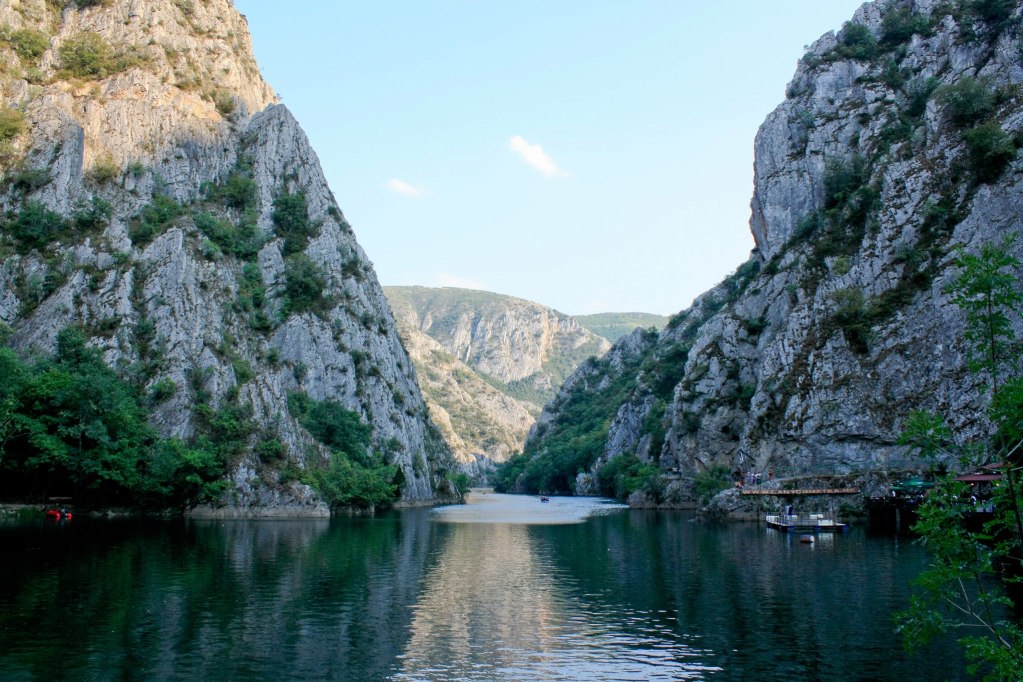 When we returned to town, Yannick and I headed for dinner at a small restaurant down the street – but the menu was all in Macedonian!  (I’m able to read Cyrillic, but it’s no use when I can pronounce something yet not understand what I’m saying.)  Our waiter could speak English, but wasn’t able to translate a lot of the menu items.  He went off for a bit…then returned with a customer from another table who helped us through the whole thing!  Aww.  Food was delish.

Such a nice place.