León is in the lowlands, the hottest part of the country.  I thought it was hot enough already…but then I arrive to find 37ºC weather!  Given that, I found a hostel with a pool and spent a lot of time there.

León is a very colonial city, like Granada, with whom it has shared a long rivalry – both cities have been the capital of Nicaragua at some point, until the neutral city of Managua was finally picked.  Aesthetically, they’re similar (though León is a little bit more rundown), but politically, they couldn’t be further away from each other – León is the hub of the left, and Granada for the right. 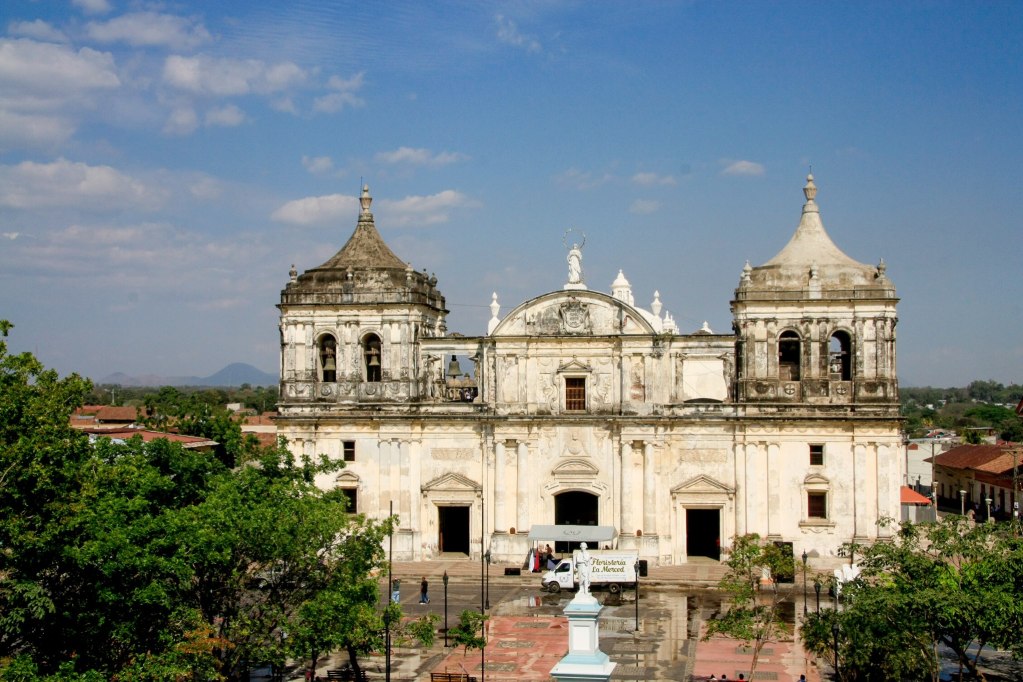 Barely steps away from my hostel, the characters of León are pretty apparent.  For one thing, it’s a student town, so students are everywhere, and the country’s best universities are all here.  But the most overt thing is how political it is – paintings, murals, graffiti all celebrating leftist heroes, martyred students, and many reminders of the past wars.

Right across from the largest cathedral in Nicaragua and the city’s central park was a pretty eye-catching building.  Being in the touristy area, it stuck out for being dilapidated and covered with graffiti tags that were anti-Bush, pro-Chávez, pro-Castro.  Turns out this was the Museum of the Revolution.  Curious, I walked in, expecting to just see a few propagandist exhibits.  Instead, after paying the tiny admission fee, I was ushered along to follow a guide.  With no other visitors in the museum, it became a private tour, entirely in Spanish. 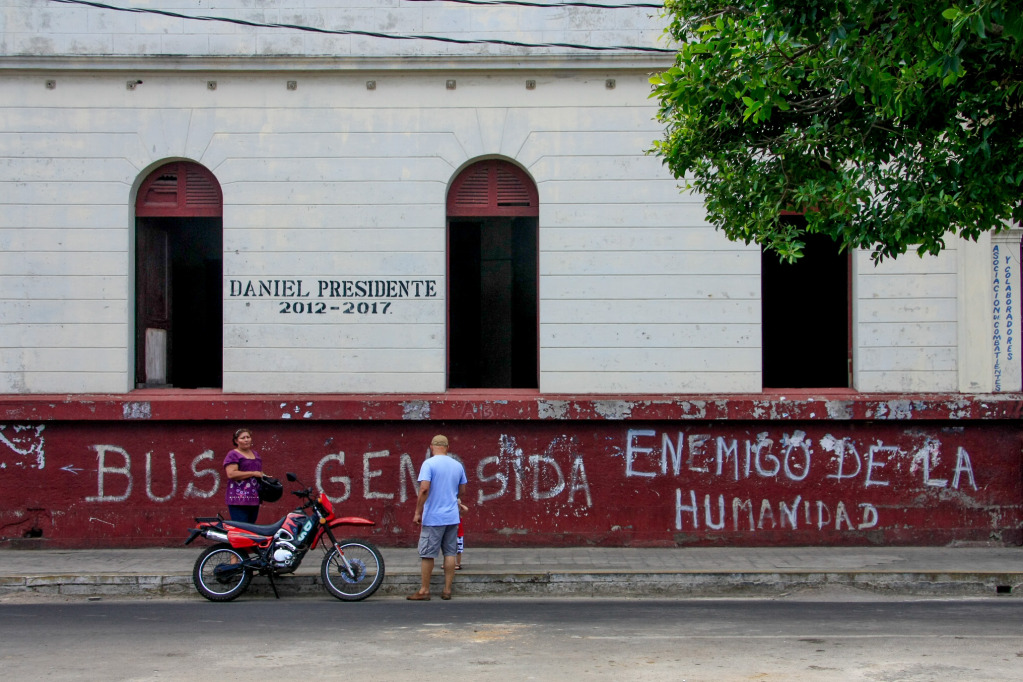 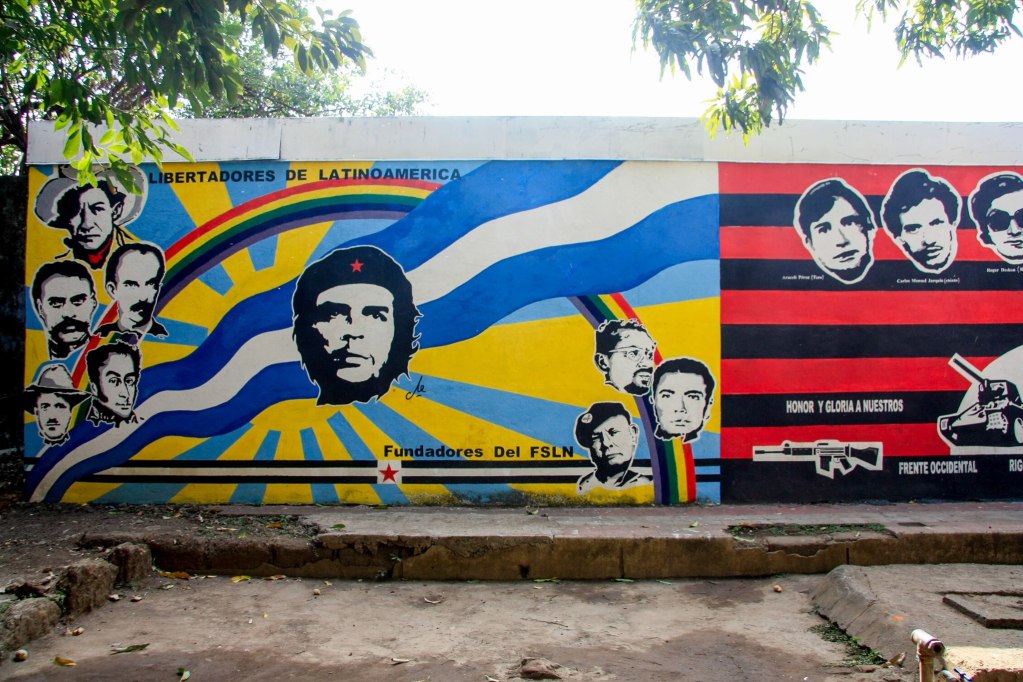 My guide was Jorge, a fighter in the revolution of 1978.  He read off the museum’s giant wall of text explaining Nicaragua’s violent recent history, but added his personal stories on many occasions.  (We ended up spending over 2 hours in one room with very few exhibits.)  Indeed, the museum is propagandist and unapologetically left-wing, but the tough history of the country and the plight of the pro-revolutionary fighters like Jorge were just gutwrenching to hear.  I only wish that I had a better understanding.

Back in the early 1900s, Nicaragua was ruled by dictator Zelaya, a liberal whom the US had various self-interest-driven disagreements with.  After providing political support to Zelaya’s conservative rivals and fostering a revolution, they intervened, and thus began an American occupation for a few decades, partnered with puppet conservative governments who served at the whim of the US.

This is where the museum’s long story begins – with the birth of Augusto Sandino.  He grew up with liberal ideals, disagreeing with the conservative regime, but was forced out of the country after he tried to kill a prominent conservative politician’s son who insulted his mother.  He returned after the statute of limitations ran out, while Nicaragua was already in the midst of liberal insurrection.  Eventually with a little money (after tepid support from the liberal generals), he built up a guerilla force mainly comprised of farmers and peasants, doing formidable damage to the conservatives.  Soon enough, after gaining more support, he controlled a sizable portion of the country. 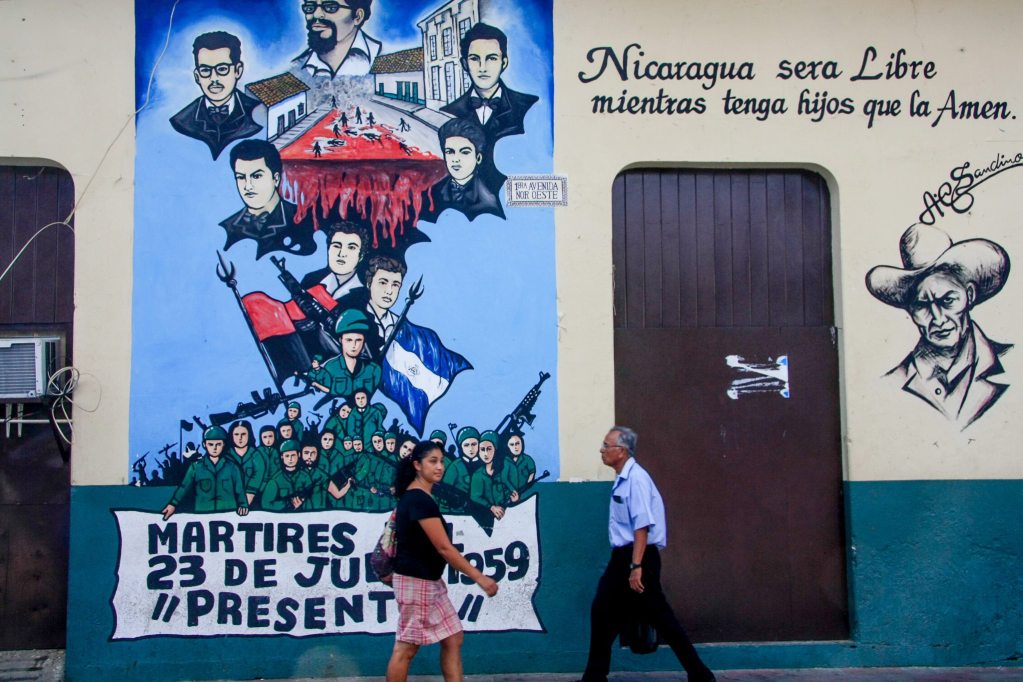 A US-led ceasefire between the liberals and conservatives was written and signed by everyone…with the exception of Sandino.  He continued the fighting with some 30 of his men, now against the US-backed Guardia Nacional.  They were so formidable that they warranted the US’s first aerial bombing ever, in the northern town of Ocotal.  They brought the war to the mountains, where they knew where to hide and fight effectively, successfully avoiding capture.

After a dinner at the presidential palace, supposedly to make peace with the Guardia Nacional, Sandino was assassinated on his way out: this was pre-arranged by the leader of the Guardia Nacional himself, Anastasio Somoza, who had significant financial backing from the US.  He became dictator shortly after, starting a 44-year dynastic rule that was self-serving, stealing away much of Nicaragua’s wealth for themselves.  Whereas the president he deposed had given land to the peasants to farm on, he took it away and forced them to work on it for little money.  Somoza himself was eventually assassinated, but his descendants continued to rule.

In 1972, a large earthquake levelled Managua, prompting millions in foreign aid which the Somozas largely took for themselves.  This led to significant dissent among the citizens, only exacerbated when a prominent journalist-critic of the government was assassinated by the Somozas.  And then suddenly there was another insurrection – which is where León comes in.

León was in the center of the fighting, in a revolution led by a burgeoning left-wing group that called themselves the Sandinistas (FSLN, now the ruling party of Nicaragua).  Jorge walked me through various pictures, speaking with urgency.  Every so often, he’d recognise someone he knew – a picture of a man mere minutes before Jorge saw him shot to death, pictures of armed students (both men and women), friends of his (some who survived and some who didn’t).  He’d point out the window and recount skirmishes that happened around the corner or down the block in vivid detail.  And of course, he was proud to mention that the crumbling building that the museum is housed in was used by Somoza’s Guardia Nacional, and that the balcony was where Somoza once threw money in the air to try and please the people waiting below.  And then Jorge showed me the museum’s collection of homemade Molotov cocktails and a rocket launcher taken from the Guardia… all real (and hopefully safe?).  He passed me the rocket launcher.  It was weird holding an actual weapon.

The subsequent political events that followed (Contra revolution, moderate rule, and now FSLN rule) were not relevant to the museum, but Jorge was of course happy that the FSLN is in power now — indeed, the FSLN flag flies everywhere in the Caribbean coast and the north of the country.  However, he mentioned that the museum could really use some fixing up, but they haven’t been receiving any government help for that.  Also, he wished that the museum had more visitors, but we both agreed that the lack of English-speaking guides or exhibits were a deterrent.  He took me to the roof of the building as we looked at the many tourists below.

Interestingly enough, they’re receiving help from an American non-profit, which has been coming in every year to repaint the walls and even paint some murals of famous left-wing Latino political figures.  (Che and Chávez, anyone?)  A Venezuelan flag was hanging in a back room in memory of Chávez, who had passed away the day before.

Deciding to just skip breakfast and lunch and proceed with my day, I headed to a second museum –  the Museum of Myths and Legends, across the street from a bombed church.  I had another private Spanish-only guided tour. 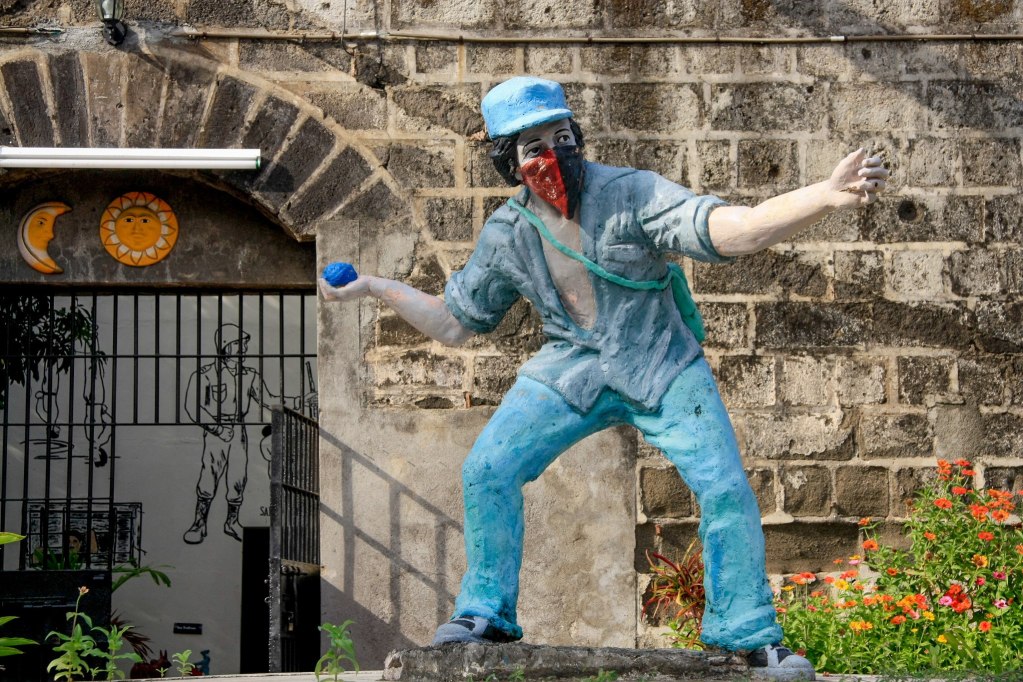 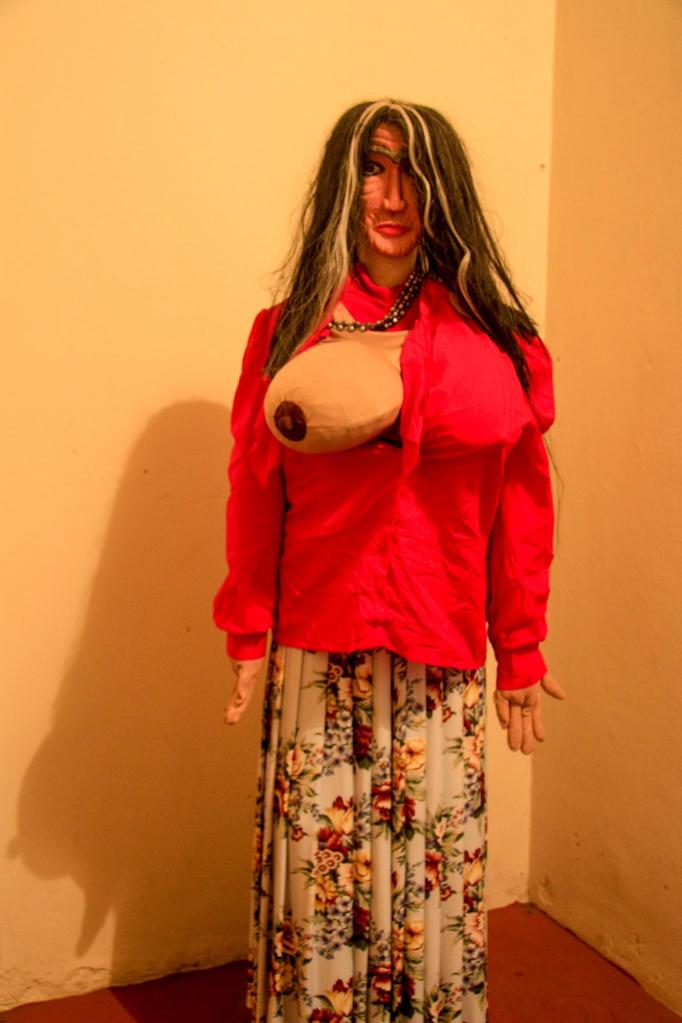 The museum is housed in the former prison which was used by the Somozistas for torture, but now has been transformed into a tranquil garden setting.  It was jarring to hear my guide introduce some hilarious Nicaraguan legend, then promptly do an about face and mention the gory types of torture and imprisonment that used to happen in the same room as the exhibit he was showing.  Anyway, each legend was presented by papier-mache figures, and were created to prevent some sort of behaviour — the caravan of ghosts that will steal you away if you jay-walk, the beautiful woman who will strangle you if you’re married and approach her, the other beautiful woman with a naked breast sticking out who will also strangle you if you’re married and try to grope her, the black angel that will swoop you away if you’re lazy…  There were also some very crazy looking models of costumes used for traditional dances.  Very schizophrenic museum!

I spent the remainder of my time in León visiting the city’s beautiful cathedrals in the early morning and late evening, and hanging out with people in my hostel (usually in the pool) for the rest of the time.  Around the town are many homages and statues to famous poets, especially Rubén Darío — this is a country that is obsessed with poets and seems to treat them like celebrities.  (Every city seems to have a street named after Darío; there’s even a city named after him.)  I also visited two volcanoes, which will be for the next blog entry.

One night, three of us went out for dinner, then headed to a bar/hostel later for drinks.  We were approached by a tipsy Nicaraguan man asking for a light for his cigarette.  We obliged with the candle on our table, and he sat himself down without invitation, then launched into an impromptu poem of his own creation.  Apparently that’s a high form of gratitude in a country which adores poetry.  We were grateful, but also couldn’t pay much attention after he started breathing cigarette smoke and alcohol breath into our faces… something about the beauty of a woman… something something…  Well, now I regret not listening! 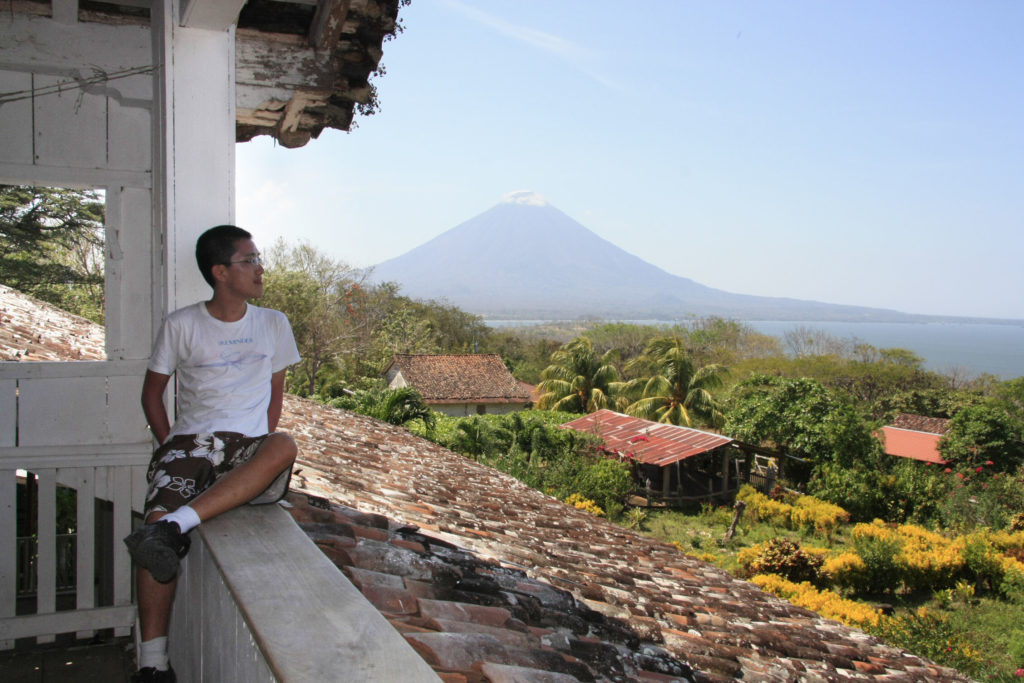