From the streets of Accra.

“Welcome to Ghana!”
“Thank you for visiting my country!”
“Akwaaba!”
“Do you like our country? It’s beautiful, isn’t it?”
“So what brings you here?”

I don’t know, actually. Ghana is not a country you come to specifically for touristic sites. Something drew me here, after reading about it, and I hadn’t and still haven’t really pinned it down. But I’ve received a heck of a welcome.

Not even before setting foot into Ghana, I had a hearty conversation with the person sitting next to me on the plane. When I arrived and walked down the street from my hostel, I didn’t have more than a spare minute to myself. A gang of people sitting under shade would beckon me, I would come, we would chat in broken English, and break into broad smiles. Next thing you know, I’ve been sitting there for an hour, laughing with them like old friends.

Unlike many other places, they all seem to immediately understand when I say I’m Canadian. After all, Ghana’s a nation of immigrants too, being a jewel of West Africa. I had a nice long chat with some Ghanaians who were fully Hausa by blood (more common to Nigeria).

“We have an arts shop out by Makola, we have everything! Even ivory!”
— Uhh, no thanks.

I take a tro-tro (public bus) to Kaneshie Market. No leg room indeed. At the market itself, not much head room either, have to avoid the people carrying large bundles on their heads. 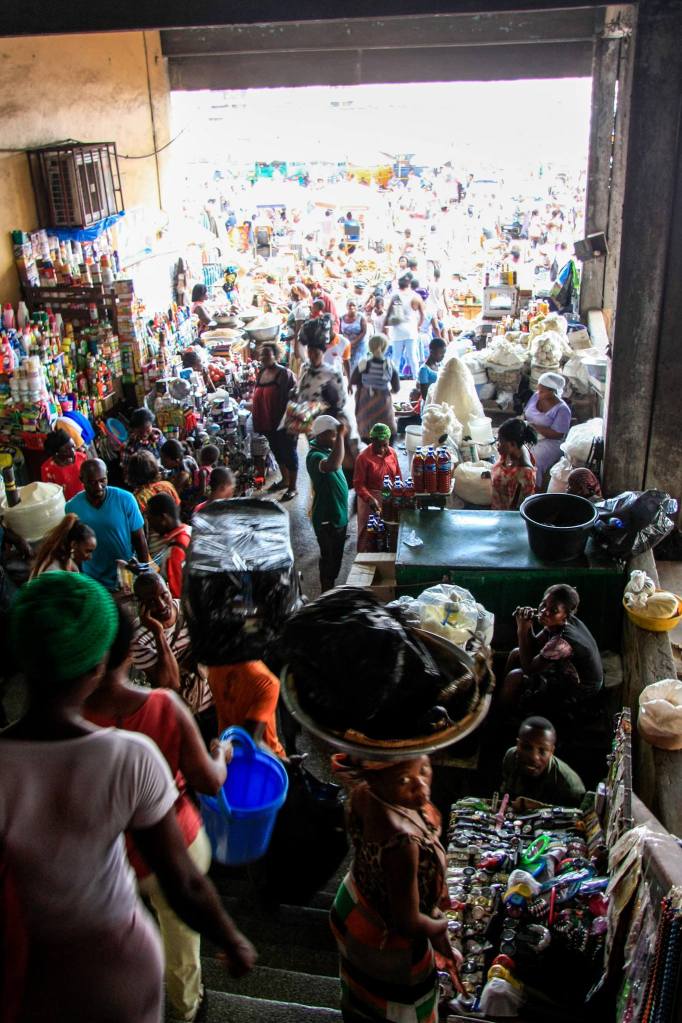 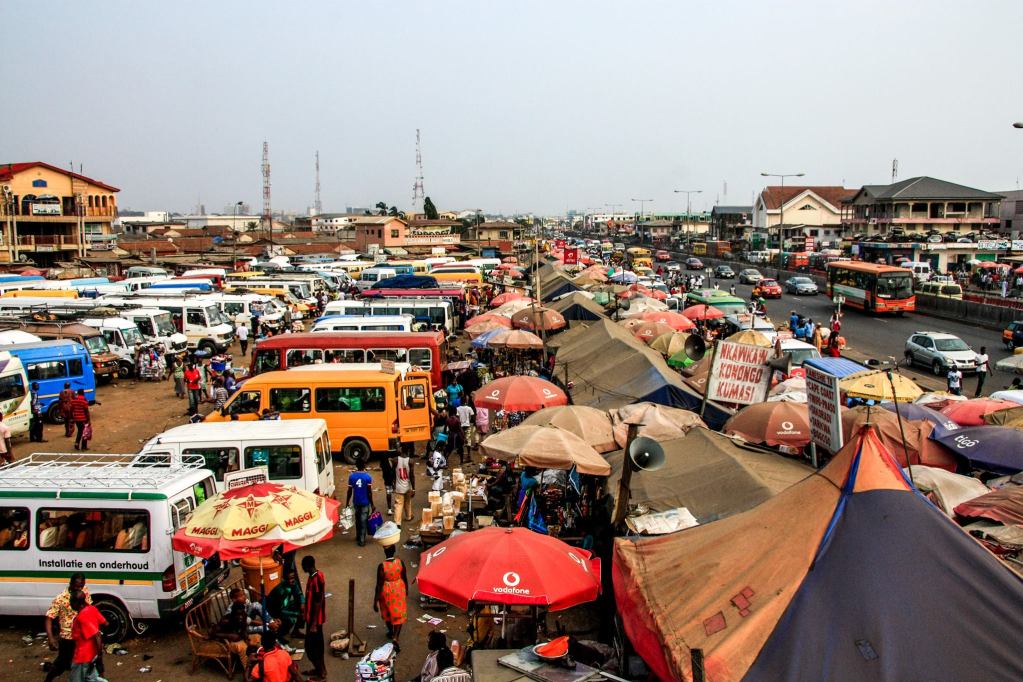 Oops. Looks like this trip will be a bit difficult with the camera. Even when aiming at something else, if someone sees a lens in their vicinity, they seem to recoil. Or come at me with a machete and yell. (Yes, that happened.)

The moment I had a local guide with me though, all shyness seemed to melt away, and hostilities turn into smiles and camera mugging. I had a guide, Alex, take me around old Jamestown, where I went up the old lighthouse for a view of Accra’s fishing harbour, and had a look around village life. Alex took me to the former palace turned compound that he and his family lived in, I met the chief, walked around past people’s homes, and watched them live as a community with a shared livelihood of fishing. With the close quarters comes poverty and lack of utilities (including toilets — they use the beach), but an area where Alex seemed to know every single person out of the thousands there. Cost me a few cedis for tips, but worth it. Some fisherman offered me some cooked spicy giant snail. Maybe next time… 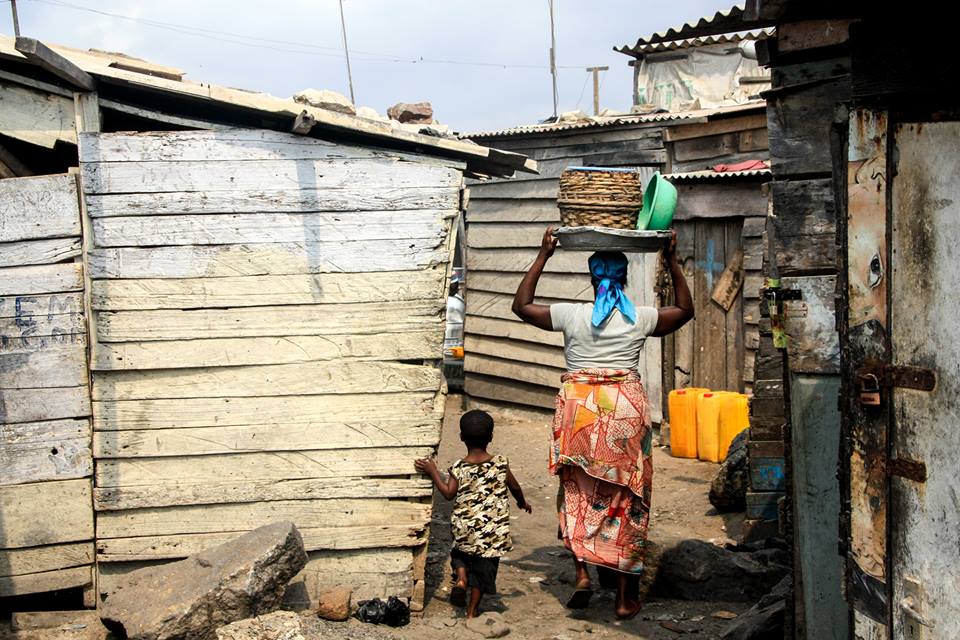 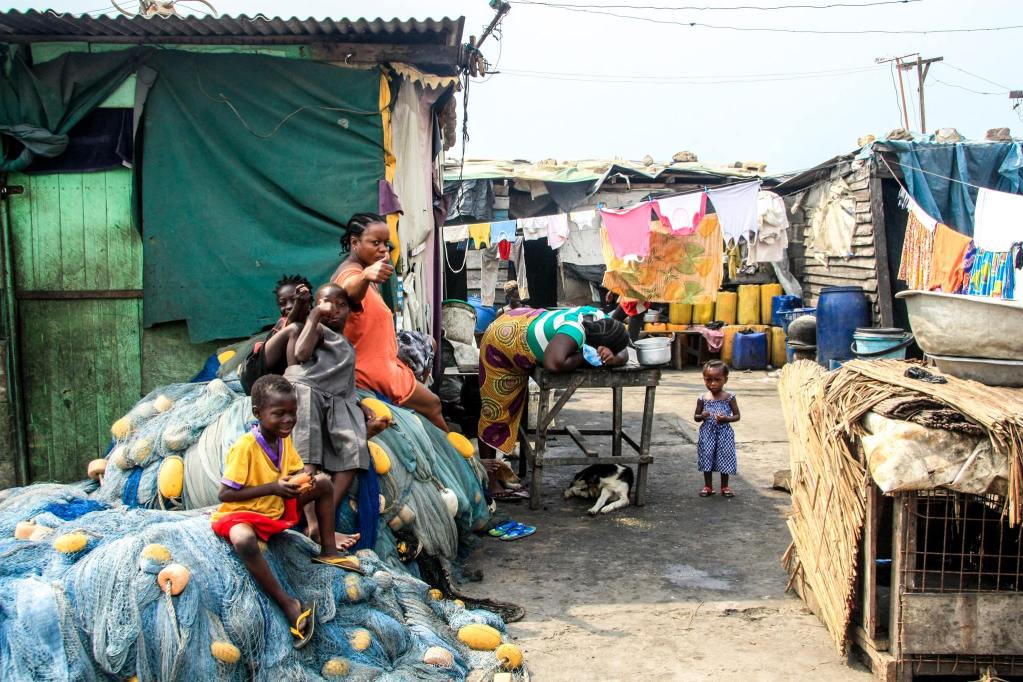 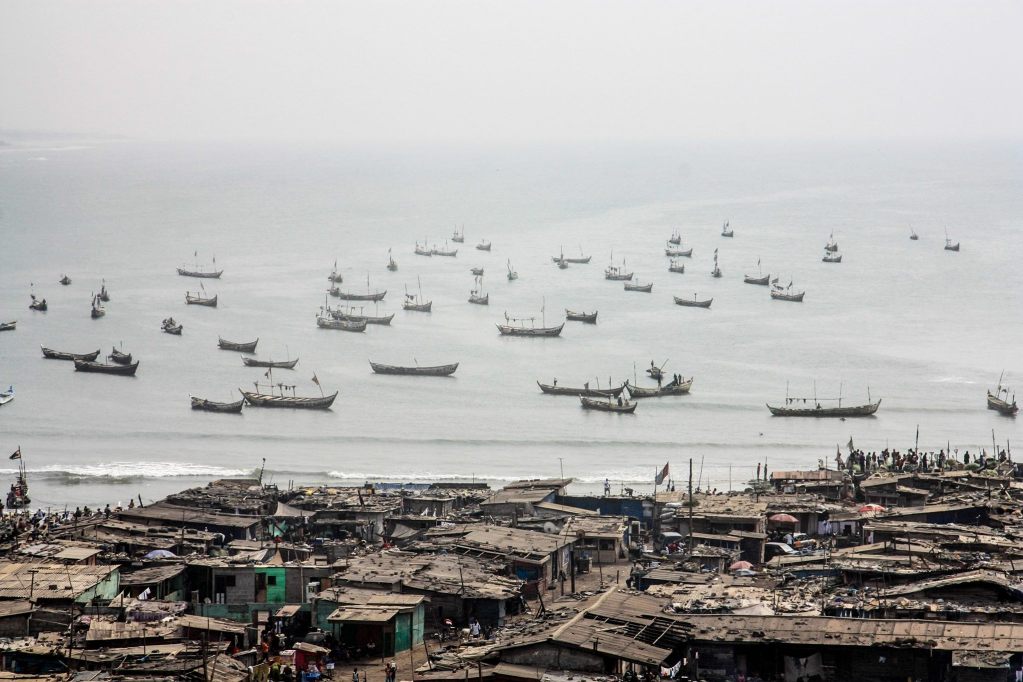 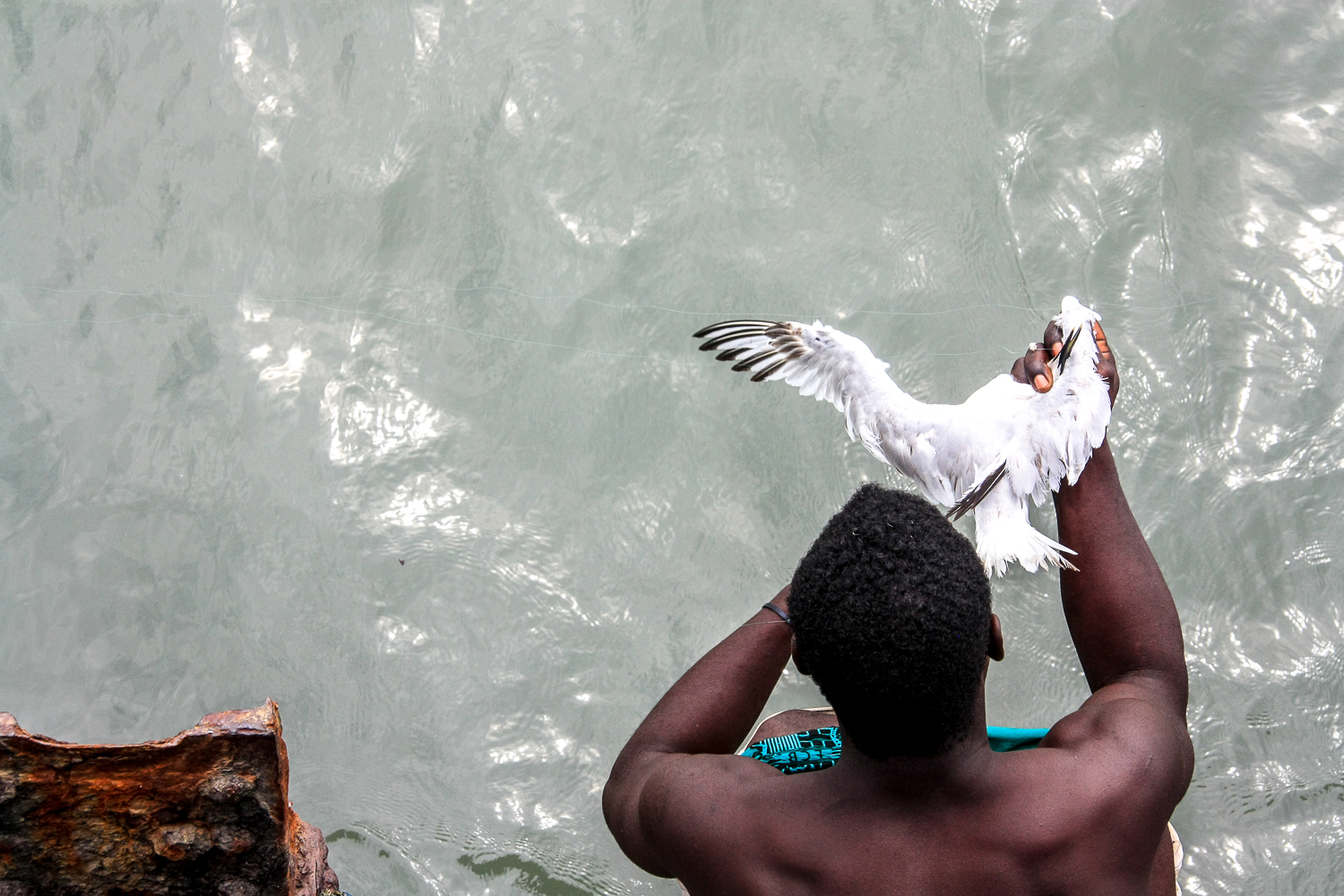 I’m not sure the Ghanaian obsession with my short hair, but it’s happened so often in the last couple of days. I’d walk down the street, someone at a market would beckon me with a “tss, tss!”, someone on the bus would say hello or good morning, some kid would see me. Most frequent comment I’ve gotten in Accra, without even so much as an introduction. It’s flattering.

“Hi! Where you from?”
— Hi! Canada.
“I want to be your friend! Do you have Facebook? Email? Can I have your number?

This happened several times. Didn’t even say my name yet. On the street, on a tro-tro, asking for directions. When I walk down the street, someone always seems to come up to me. When they go, I continue…only to have the same thing repeat again in a hundred metres. A man waiting for a tro-tro with me, Asembah, gave me his full name, number, and paid for my ride. He offered to take me to his house and drive me around the city, I said I’d call him back, but… well, I couldn’t understand 70% of his English even in person and vice versa, on the phone it’d be pretty hard…

A kid named Joshua, 14 and in grade 8, decided to follow me not one minute after I left Alex in Jamestown. I obliged, and he took me to where I was about to head to anyway: Kwame Nkrumah Memorial Park, where the first president of an independent Ghana is buried. I couldn’t really pay attention to the exhibits with him around hyperactively explaining everything he probably learned in history class, but come on, that’s worth it! 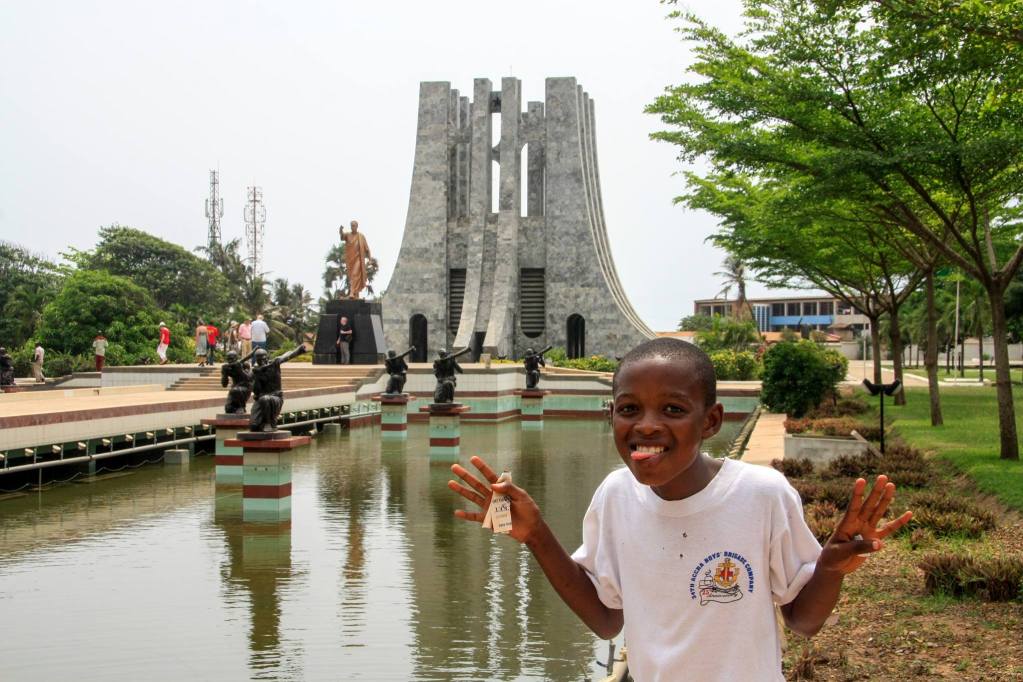 — Thank you soooo much for your time.

People here really go out of their way for me, and I almost don’t know how to react to it.

Nana, a really chill guy living next to my hostel, seems to relish every opportunity to help anyone, despite juggling a hectic life of musicanship, artisan craft seller, and barbering. He guided me to 4 internet cafes (after I kept finding one after the other down or closed), a billion pharmacies to look for mosquito repellent (still working on that one), places to eat in the Darkuman area where I’m staying, a cell phone shop during the first heavy rainstorm in 6 months on a Sunday when most shops are closed, and even invited me to a show of his (which was cancelled due to the rain).

Charles, a solo tour operator I found recommended in various guide books, took an entire day to take me to the Togo and Benin embassies to get me my visas, and spotted me for cash when the fees started piling up after the Togolese officer was having a bad day and decided to inflict it on everyone in his path. We left the Benin embassy with absolutely nothing left in our pockets. Then he took me to his home neighbourhood of Nima, a densely-populated central suburb now overcoming its past seedy reputation. We visited his flat, his stepmother’s shared compound with her neighbours, the market, had some red-red, and he shared his story with me and his aspirations for the proceeds from his tours, his personal passion for his neighbourhood shining through. People were incredibly welcoming, all smiles. In the end, after six hours? He didn’t even want anything other than the taxi fare — I gave him more anyway.

People on the street ask me what I like about Ghana so far. I say the people, without hesitation. They agree.