After meeting Erik (Norway), Jessica (USA), and Felix (England) from my hostel in Accra, we decided to swap numbers and travel on and off together. So, Erik and I headed off to Cape Coast to meet Jessica, who was one day ahead of us. We caught a tro-tro (reluctantly, instead of a bus) headed to Takoradi from Kaneshie Market and went off on our way.

Well, off we went. So far that we ended up passing Cape Coast and not realising it until we asked the driver about 45 minutes after we passed it. Oops. We just decided to go along with the flow and headed to Takoradi instead, and from there, we made our way to Busua, the backpacker-friendly beach village of Ghana. 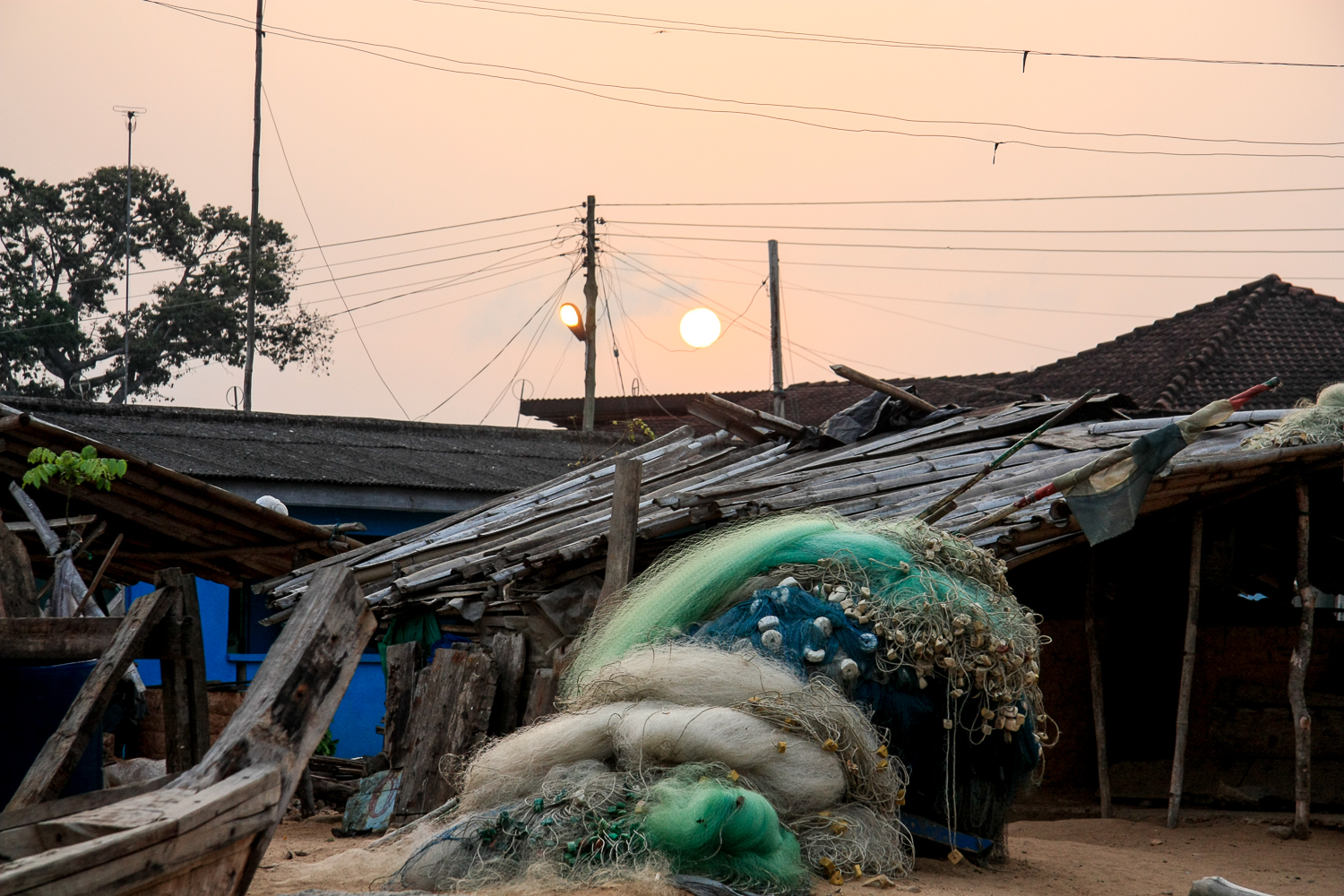 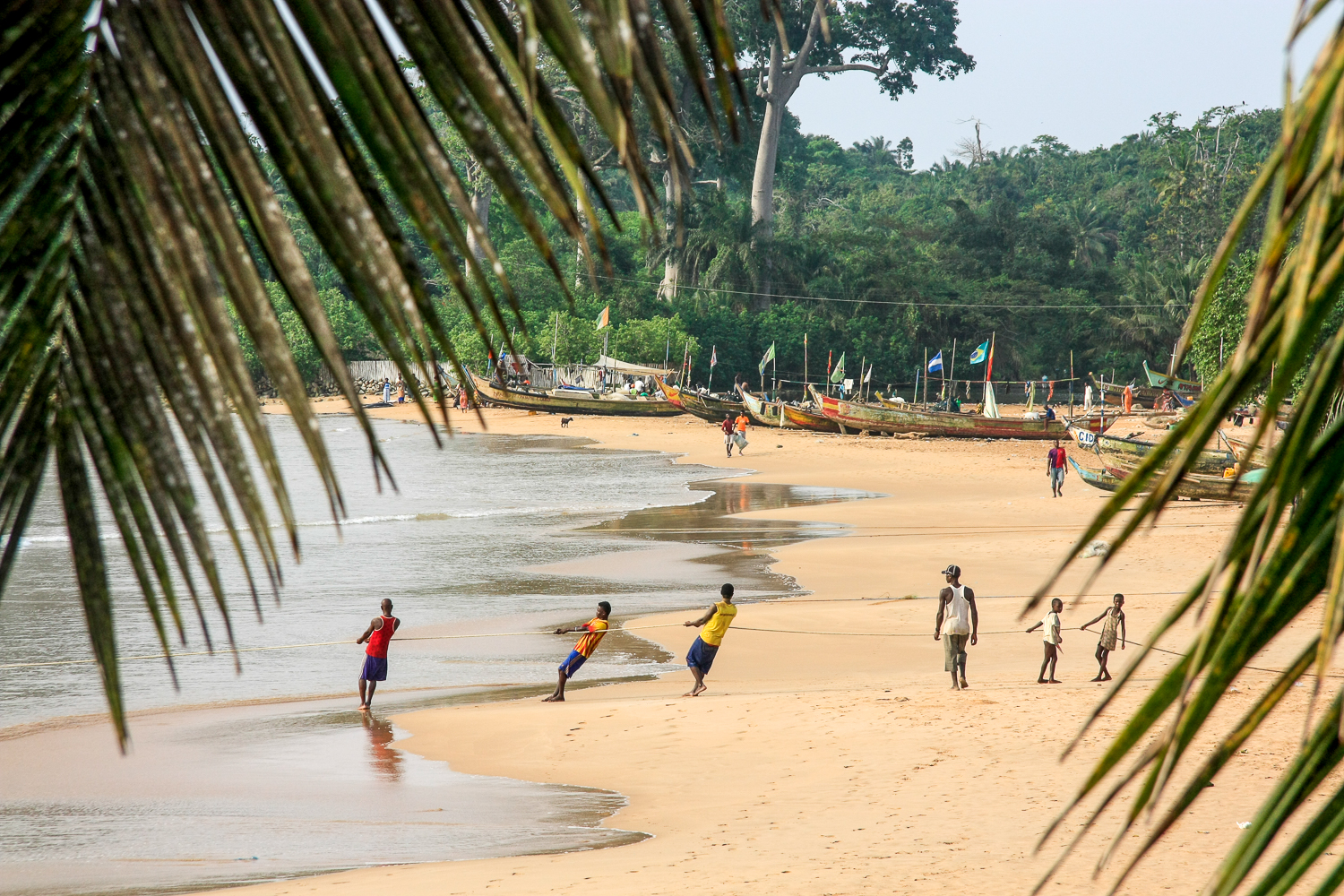 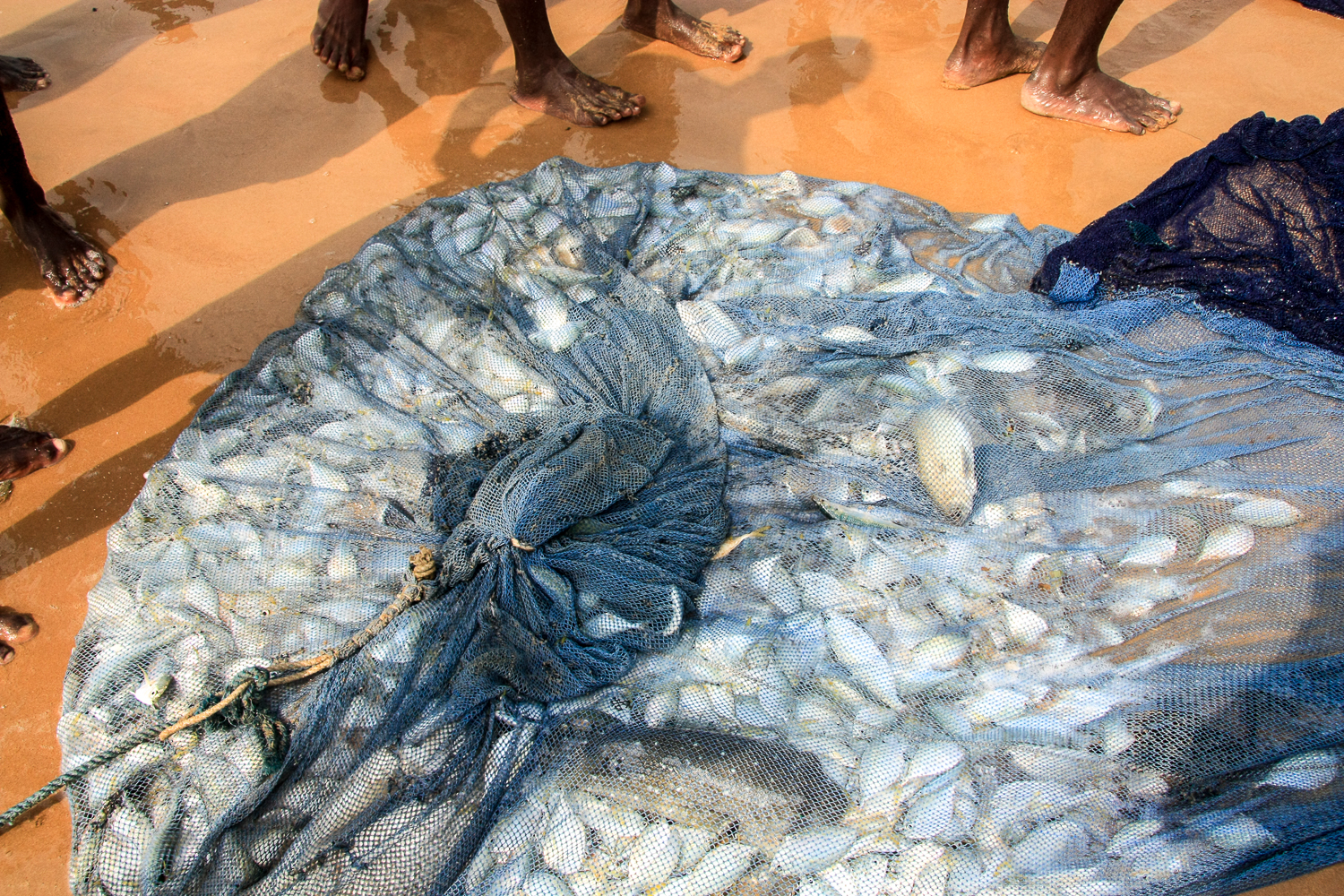 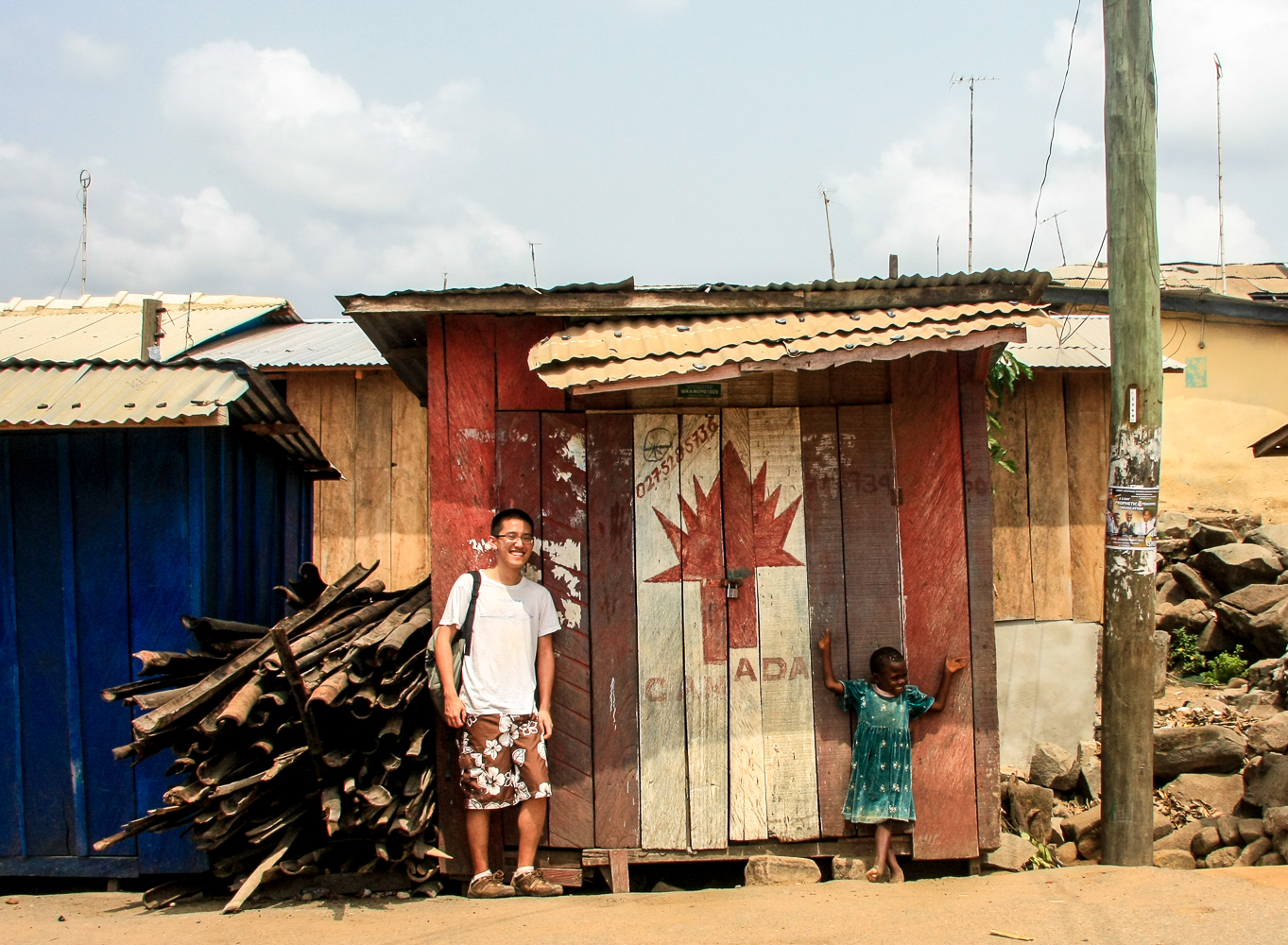 We had a great time! Banana pancakes, fresh juice, a surfing lesson for me (I managed to stand up!), tightrope walking with the local kids (I’ve got nothing on them), some work on the tan, Champions League matches on TV, a few more people petting my hair… so much fun that we convinced Jessica to come over from Cape Coast to join us for a day. 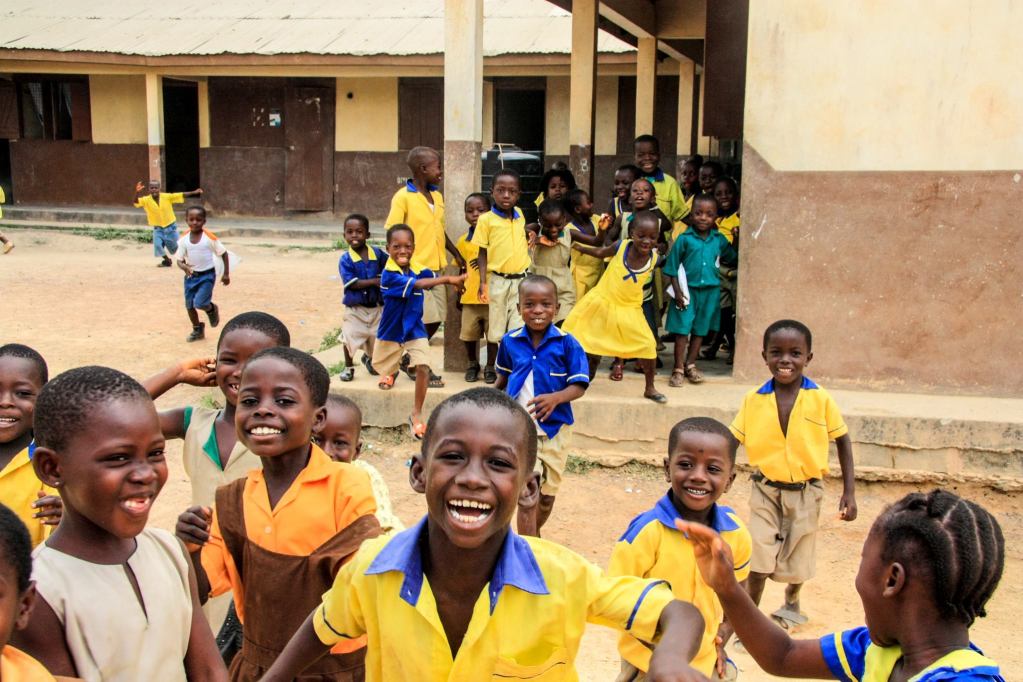 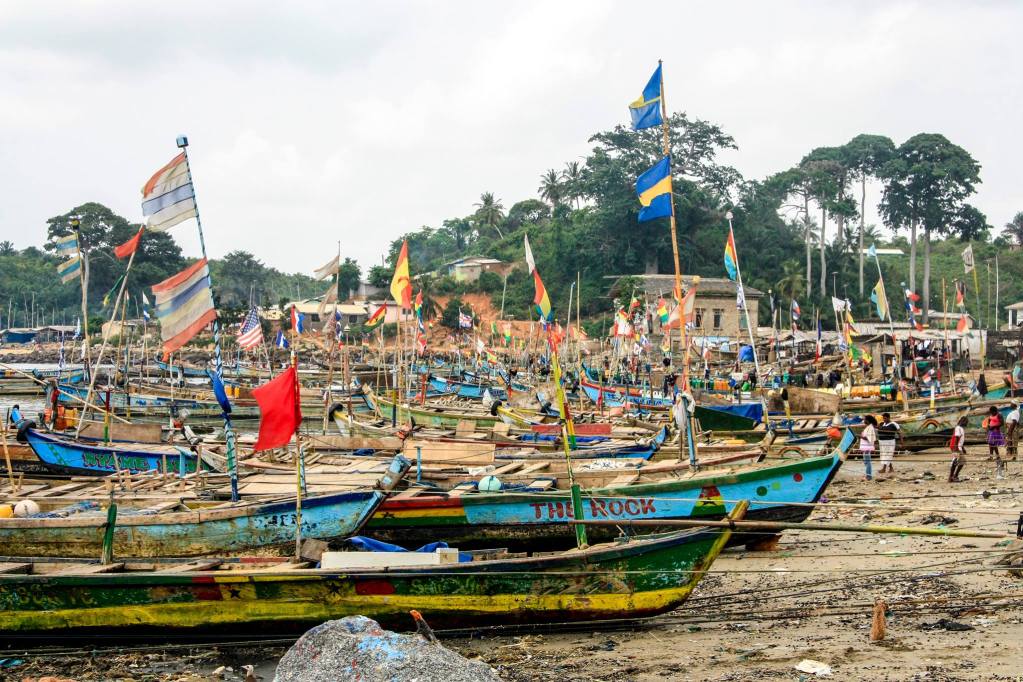 On my second day in Busua, I met Hanna (Finland), and we decided to walk to the neighbouring village of Dixcove. Aside from being a fishing village with friendly schoolchildren who wouldn’t stop mobbing us and kids thinking I’m a white man from “Chinada”, it contains an ominous vestige of the past overlooking it from the hillside — Fort Metal Cross. We went in for an impromptu tour and learned a bit about the horrific slave trade. The name “Metal Cross” comes from what was used to brand each slave.

It only gets worse from there.

Saying goodbye to Erik, Jessica and I headed back to Cape Coast, a less chaotic city than Accra but with a serene seaside vibe, to check out both its infamous eponymous castle and Fort St. George in neighbouring El Mina. Both have similar histories: used variously by the Portuguese and the Dutch as trading posts, then eventually ceded to the British. First, they traded guns and alcohol in exchange for gold, which seemed in such abundance that they deemed the region the Gold Coast. But then they realised that the most profitable trade was… people. And so, the British fought, and by the rules of war, they took their prisoners. Then they took some more people, from as far as Mali or Niger. 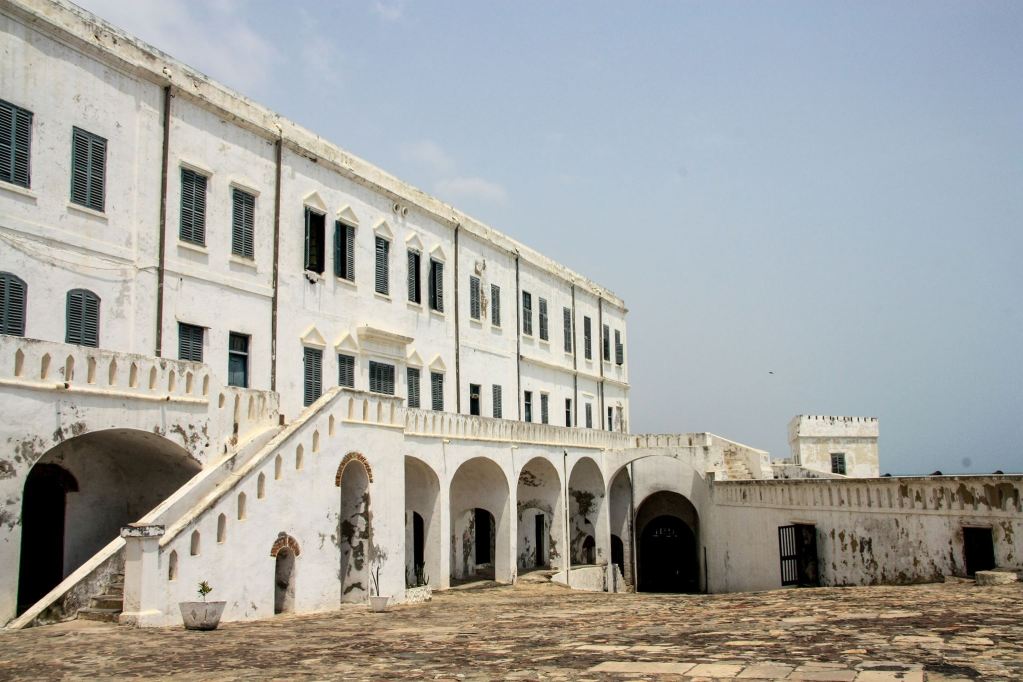 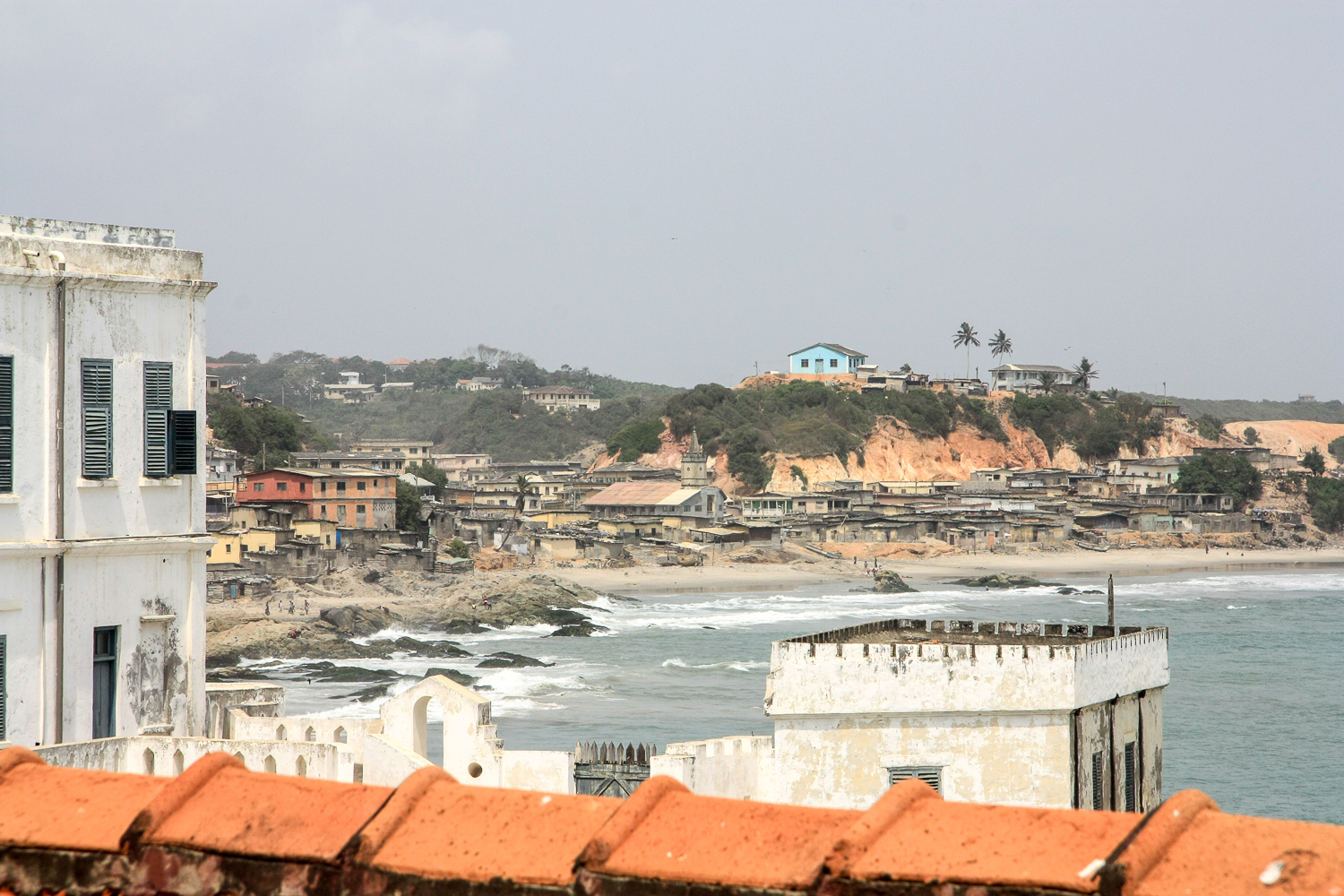 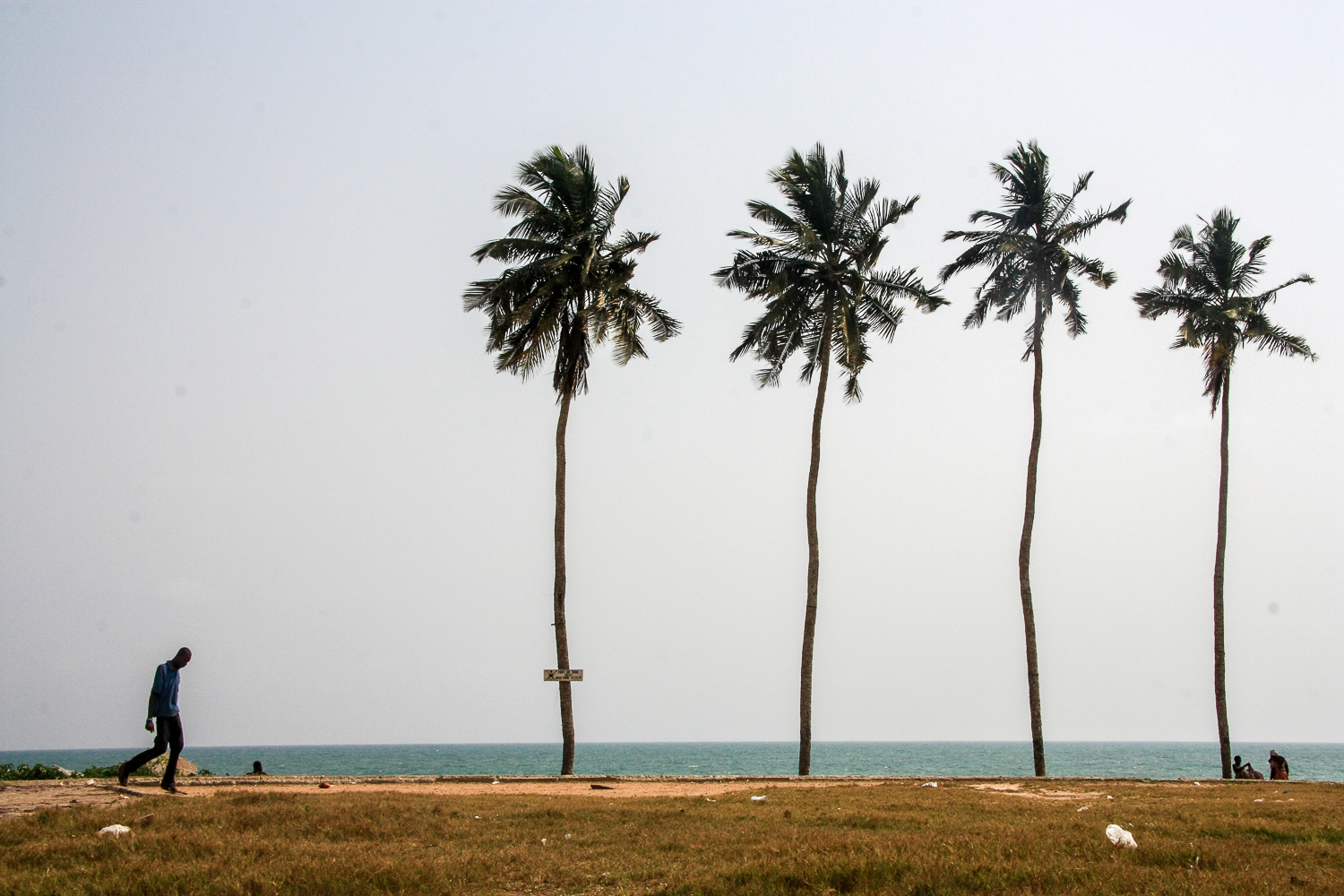 In each fort, we were first taken to the dungeon where the male slaves were kept. In an area about the size of four classrooms, there was one porthole — the only source of light and ventilation. In this area? 2000 slaves. To sleep? They laid with heads touching the toes of the next person, or they laid on top of each other. Two meals a day, not enough to fill, but enough to keep them alive. Their bed was their toilet and their meal table. A mark on the wall about 6 inches from the ground marked the level where the fecal matter had piled up, raising the floor level.

The female dungeon was equally bleak, but smaller, and enough to hold about 500 slaves. In the open area outside, they would be asked to wander while the British governor looked down from above. At his pleasure, he would pick one to bring upstairs and rape, before sending them back into the dungeon. If they got pregnant, they would either be freed (Cape Coast; meaning rape would be their only hope for freedom) or freed for three months (El Mina), returning after giving birth. Their children would never meet their mothers, and as mulatos of mixed descent, they were given British education and eventually trained to be slave masters.

Each dungeon’s portholes were also used by guards to monitor the slaves. The guards were often Ghanaians, paid not in money, but in alcohol.

If anyone misbehaved, whether British soldier or slave, they would be put in a cell. The British? They got an iron cell, they got meals, and they would be freed after their penance. The slaves? From 5 to 50 of them would be thrown into a dark cell the size of a small bedroom, never fed, door never opened, locked away until every last one of them died. Imagine for a minute — you’re the last one.

The slaves would be kept in the dungeons for around 3 months, before walking to the castle’s “Door of No Return” being shipped off to the Americas — everywhere from Brazil to the Caribbean to even what is now (but not then) Atlantic Canada. Conditions on the ships were worse; slaves were thrown aboard if they were dead or if the ship needed to lose some ballast. The estimate is that something like 2.5 million slaves were sent off. Generations later, African Americans have developed a very separate culture from their African ancestors. 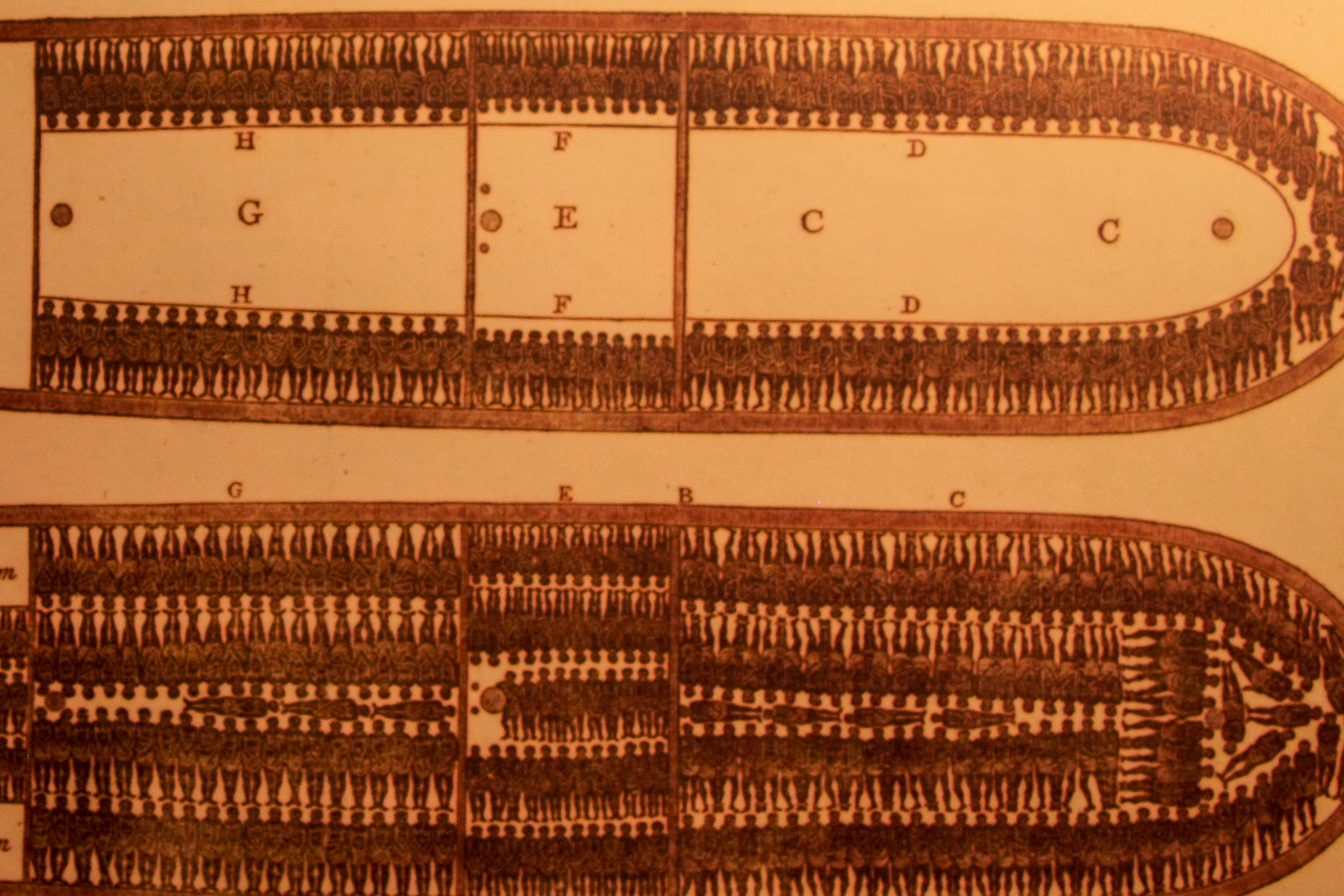 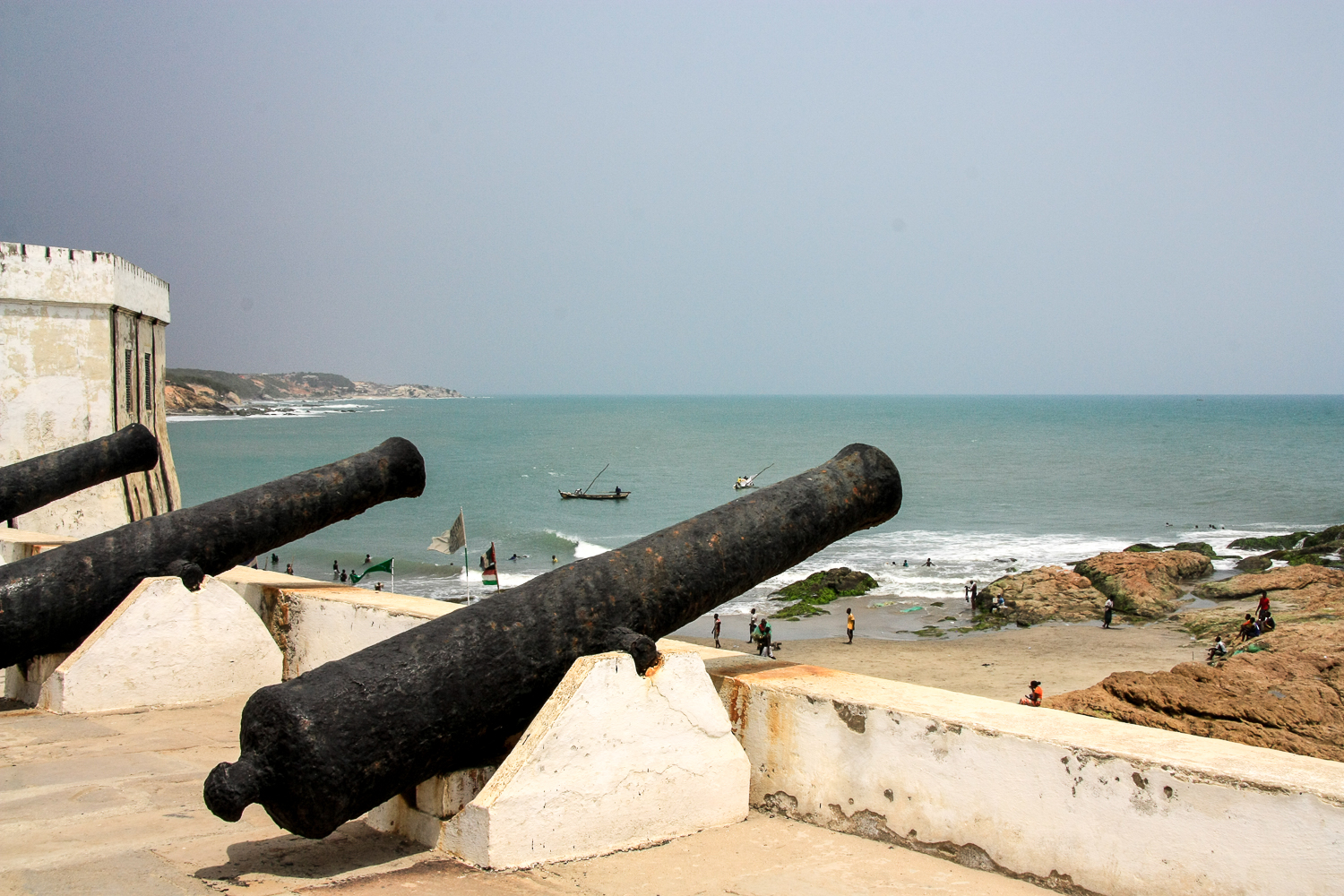 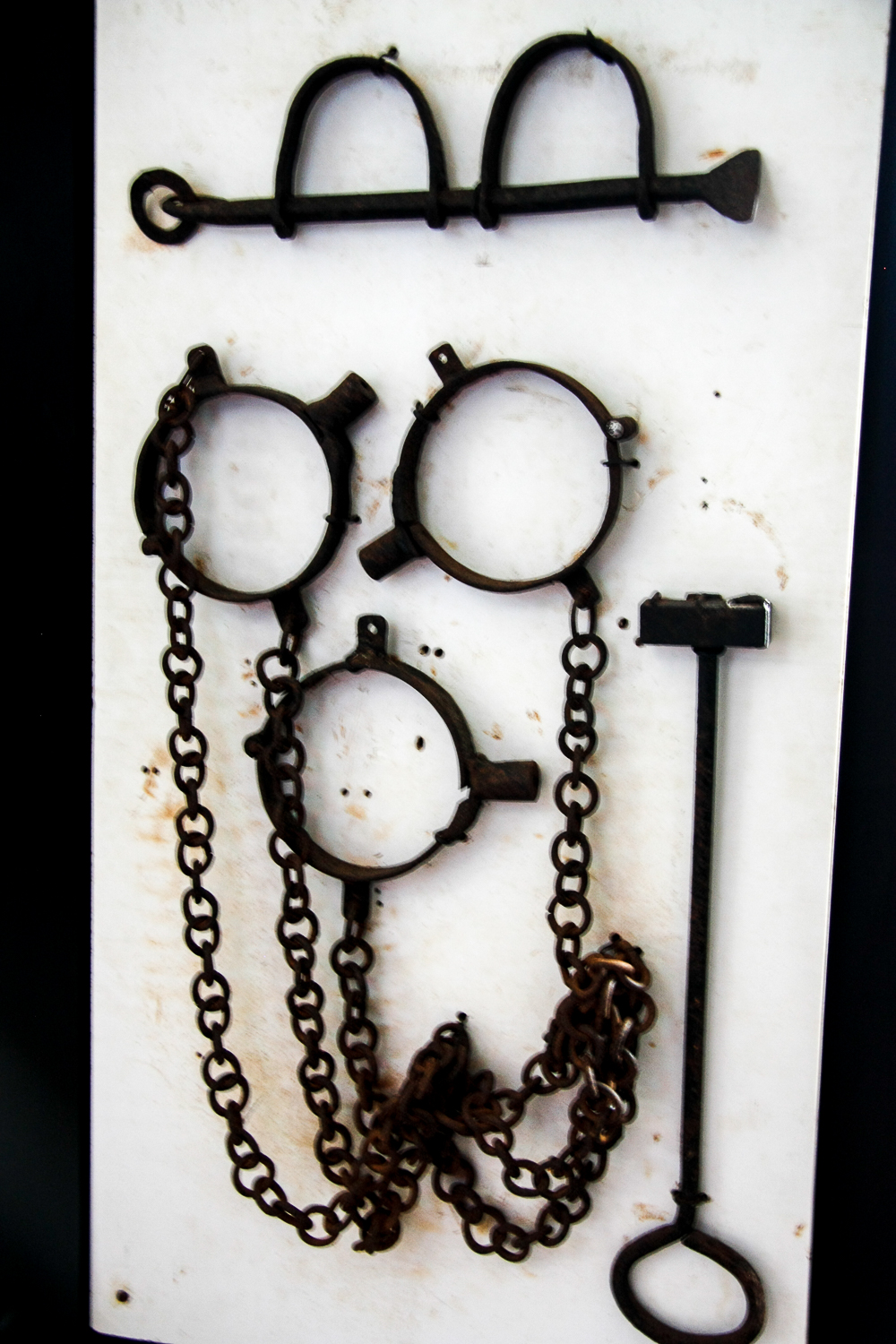 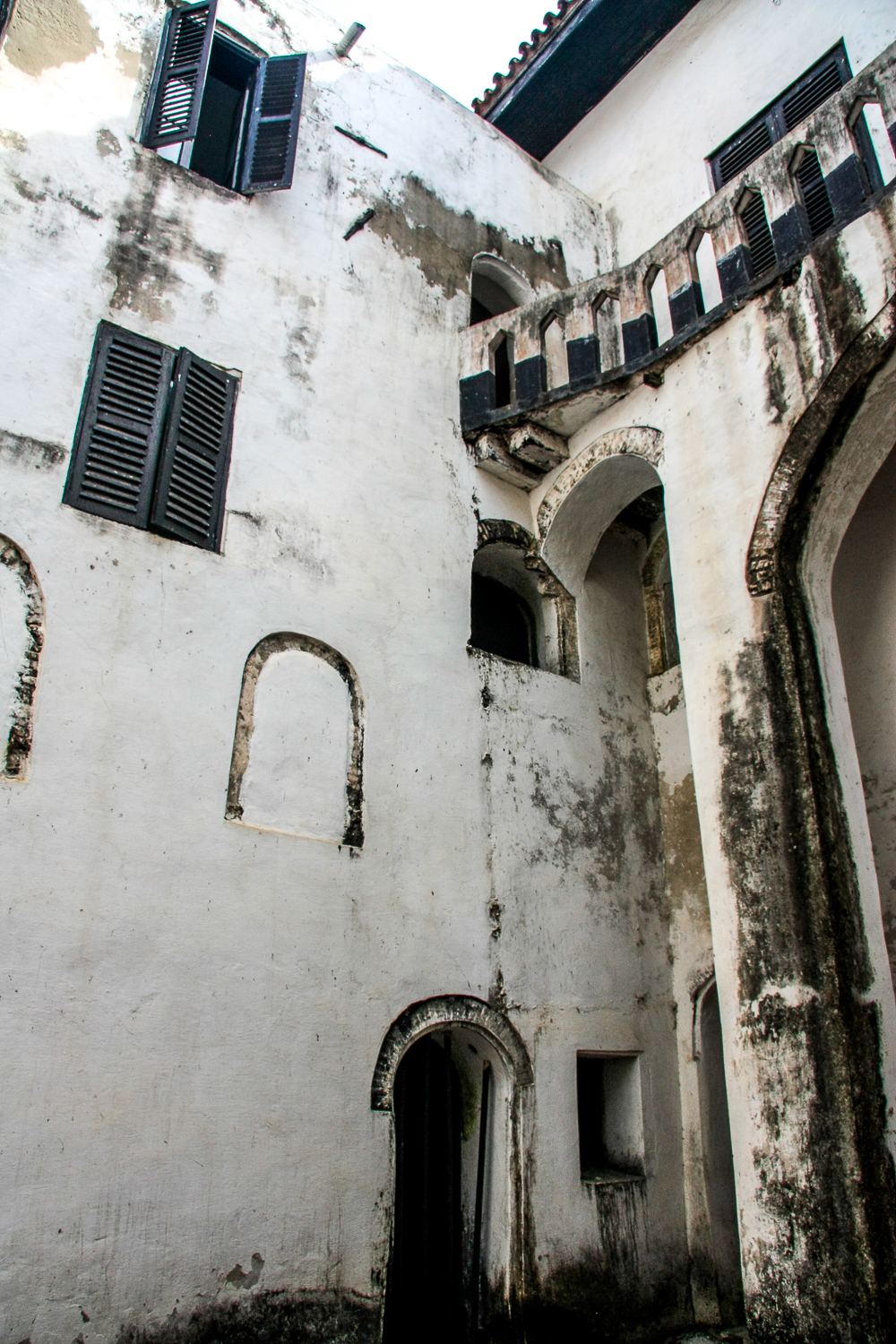 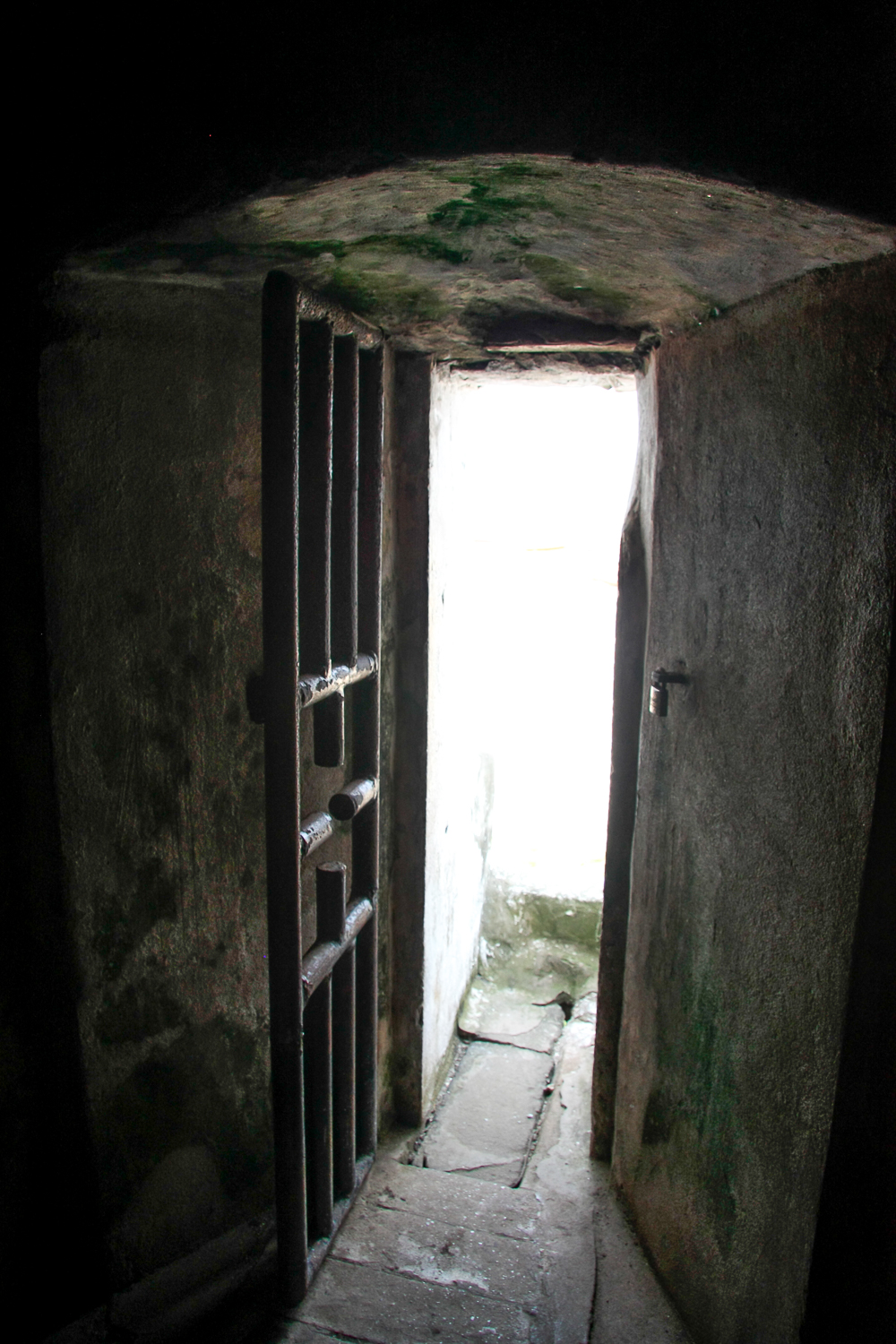 The cruel irony of this is that the British built a church over the dungeons. There’s even a plaque, written by a priest, memorialising one of the governors as a pious man. They also forcefully converted many locals to Christianity. Yet they treated the locals as less than human, even less than animal.

However, the locals? Look around Ghana now, over a hundred years later. Christianity is the norm, especially in the south. Nearly everyone I meet is Christian. Signs like “Sweet Jesus Coffee Stall”, “God is Great Station and Bathroom”, “There is One God Fencing”, “Jesus is Lord Electricity”, “Without God There Is No Life Enterprise”… are incredibly common. They may not be materialistically prosperous, but their faith certainly gives them promise.

What got the locals to convert? Better still, what got them to cling onto life? There were some who chose to die in the dungeons by starving themselves, considering it a less undignified way to die — if I were them, I’d do that too. But what about the others? And what about the slaves thrown in the cell to die — there are scratch marks on the floor and walls. In their dying breaths, they used their shackles and attempted in vain to claw and bite their way out in complete darkness. And when they survived, they were forced into a life of servitude, never again to see their families, as if any hope of that existed in the first place. 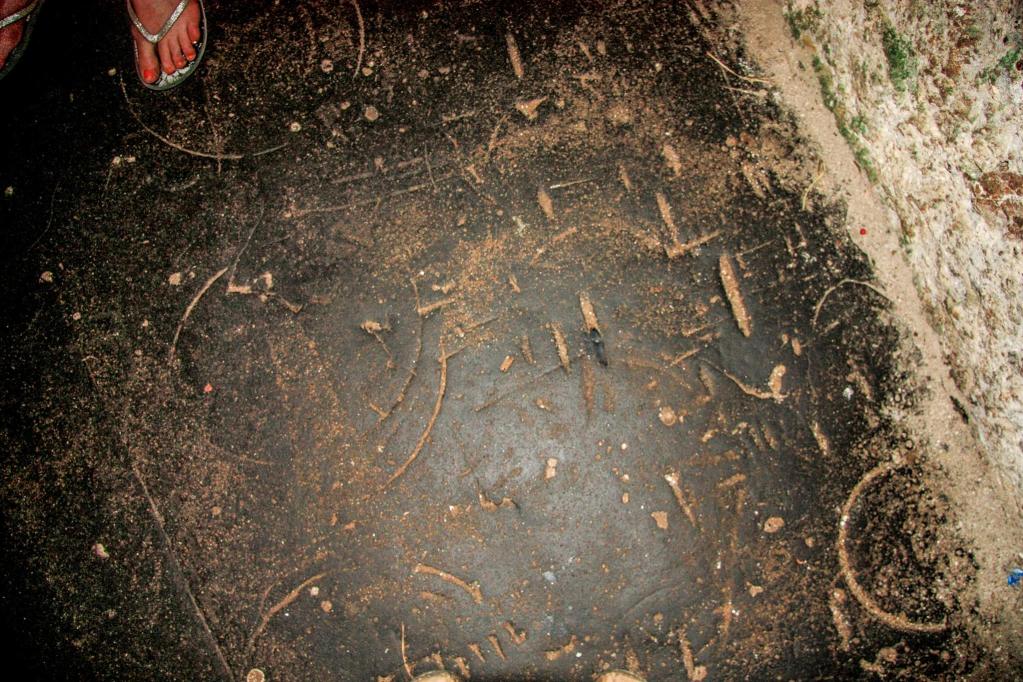 There’s something about the people here.