Cities are exhausting. While I’ve been enjoying my time so far, it’s been admittedly stressful. Walking out onto the street is an assault on all the senses — honking, pollution, traffic, cars with an index finger’s worth of space between each other and having to walk between them, dodging people, dodging men and women carrying things on their heads, heat, haze… I return to my room every night blowing black soot out of my nose. And when I arrived into Kumasi, I was swindled by a taxi driver and dropped off at a hostel that no longer existed — a pretty dismal start that made the stresses of the city worse. But then stuff just happens that kinda erases that from my mind.

Wandering for half an hour trying to find another hostel, I asked some souvenir stall owners for some directions. Kwadjo took me straight to a nice hostel, and offered to take me around town.

Why? I’m not sure. But he left his stall for two days. 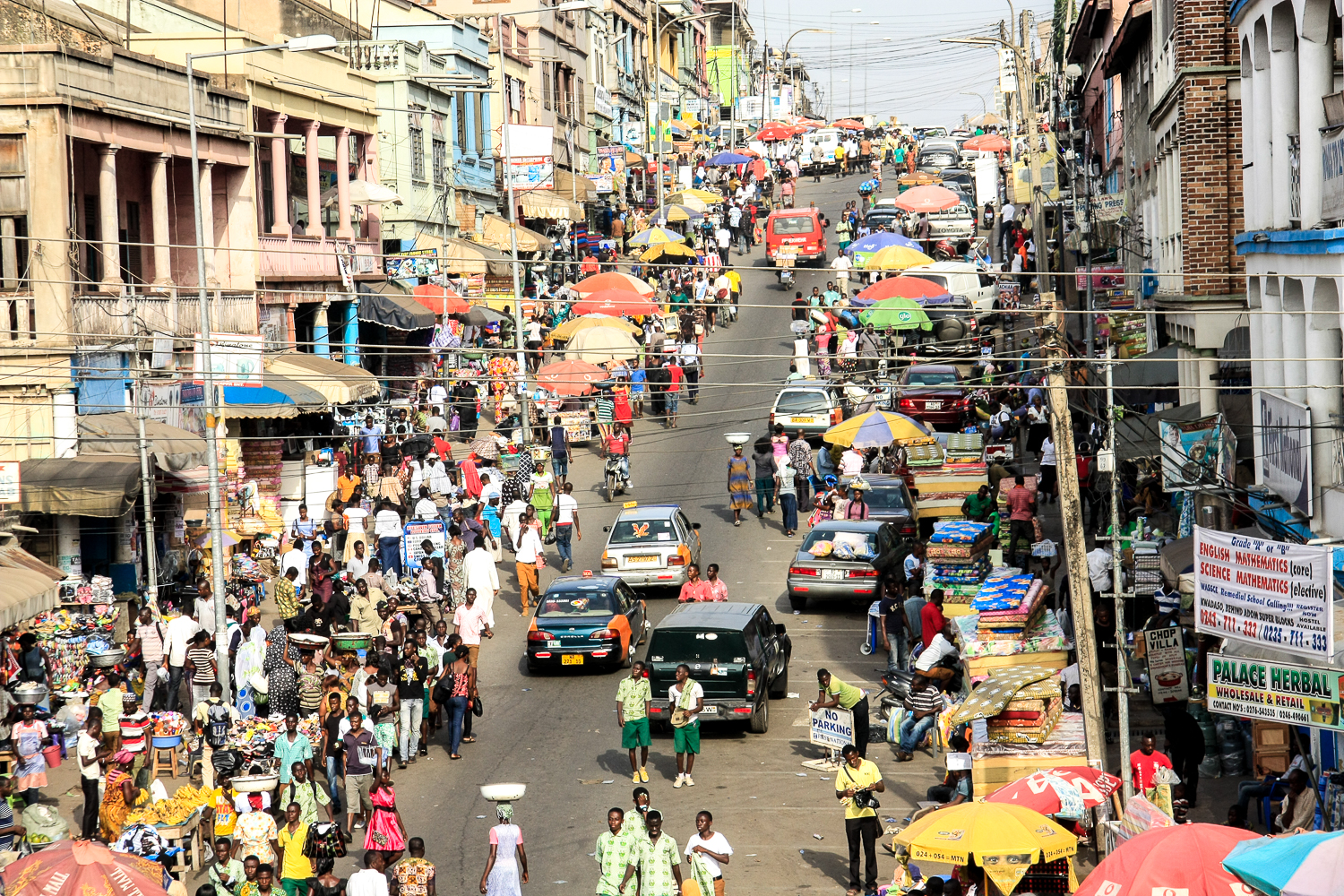 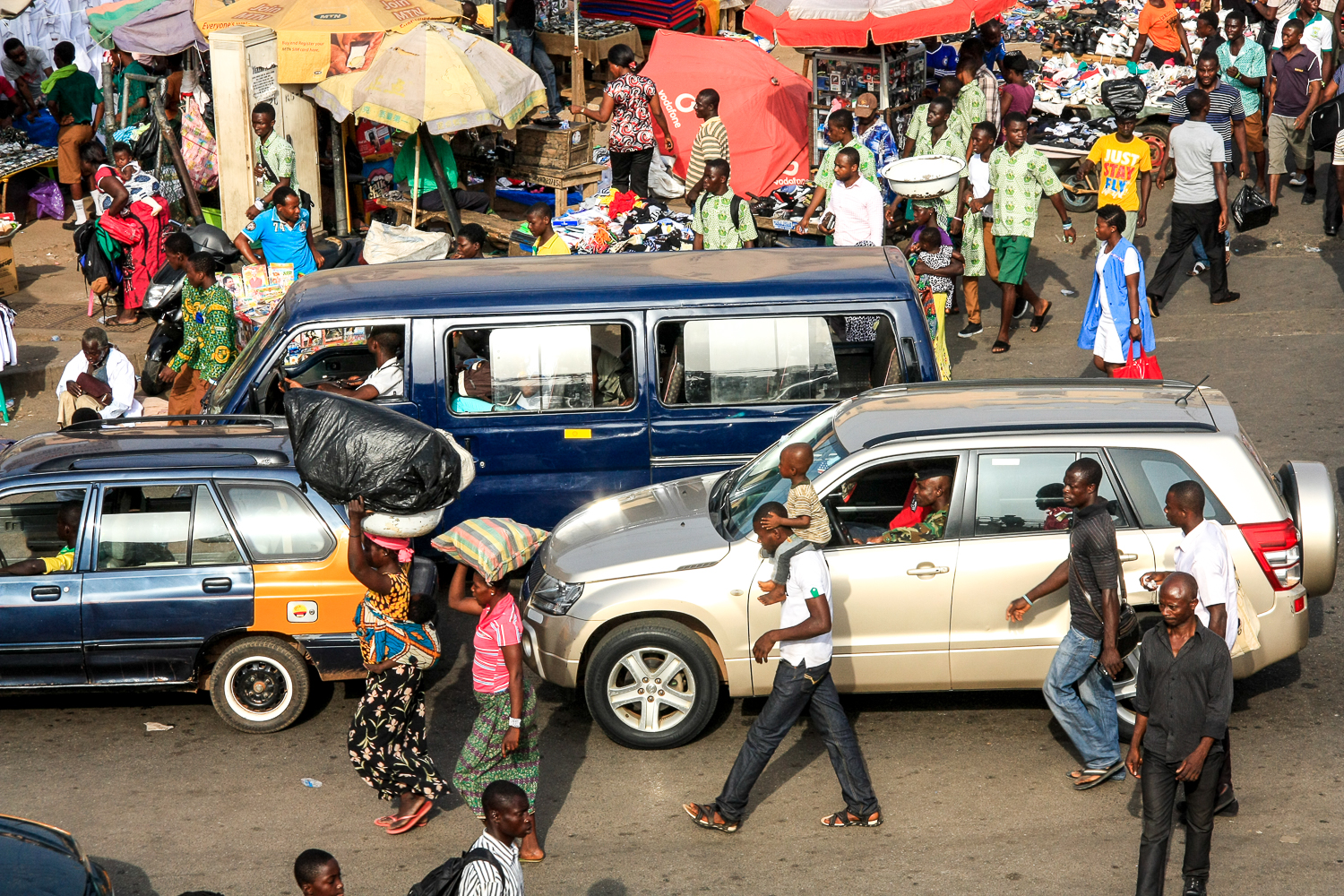 We walked through the chaos of Kejetia Market (the largest in West Africa, a complete doozy), to the former palace, had some street food, and went to some villages. I learned a lot — the relationship between the British and the Asante (Ashanti) people; in Ntonso, the craft of adinkra stamping and the hundreds of symbols that exist, each representing a phrase in Twi (the dominant language of Ghana; English is like how Mandarin is to China); in Adanwomase, the intricate kente weaving patterns, taking weeks to months to make, with exclusive patterns for the city and village chiefs, black and red for funerals, white and blue for births, and anything else for celebratory occasions, and the fact that patterns of triangles, rectangles, and zigzags also represent Twi phrases. There’s one for “I was a good friend to you, but you didn’t appreciate it.” Strips of kente cloth are sewn together into clothing or bags or anything. In theory, you could show up to a funeral wearing black and red, but with adinkra or kente phrases insulting the deceased! The family could respond in turn the next time they see you. 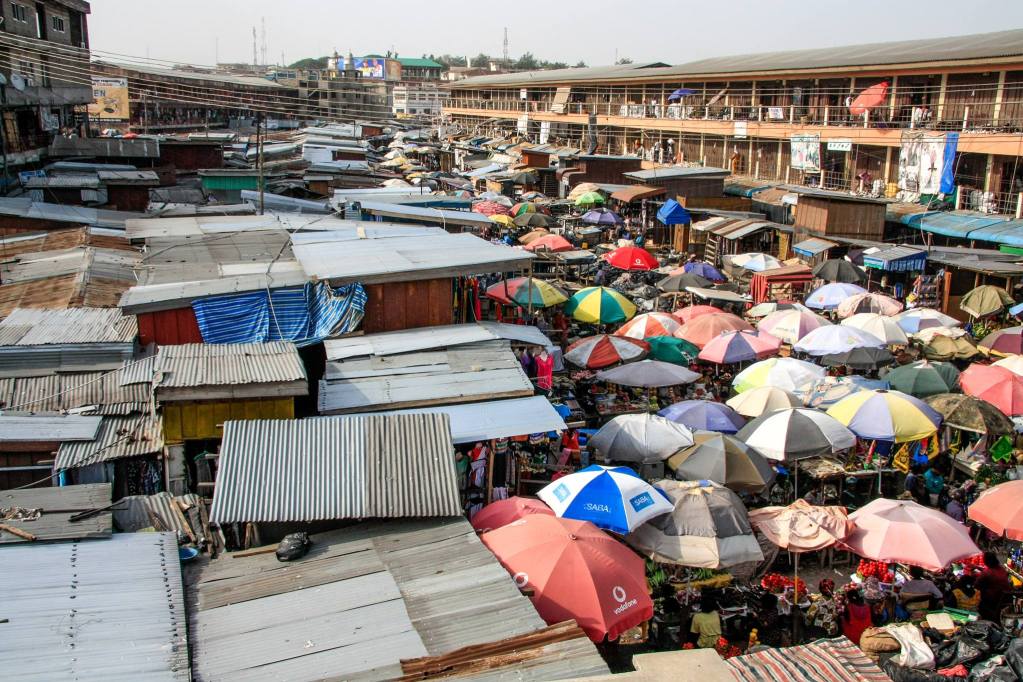 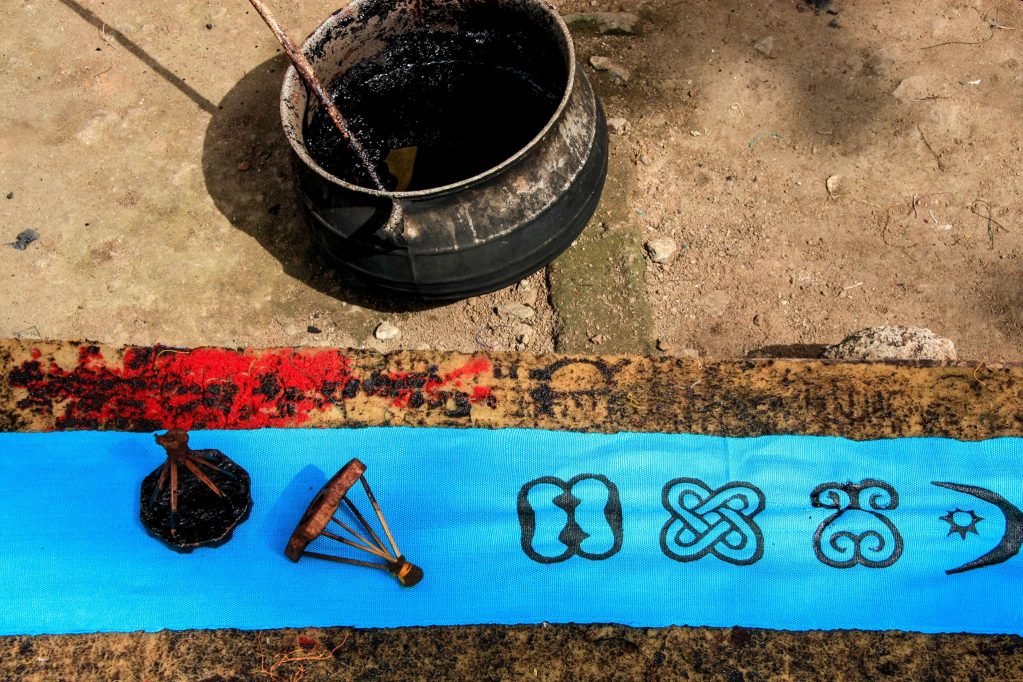 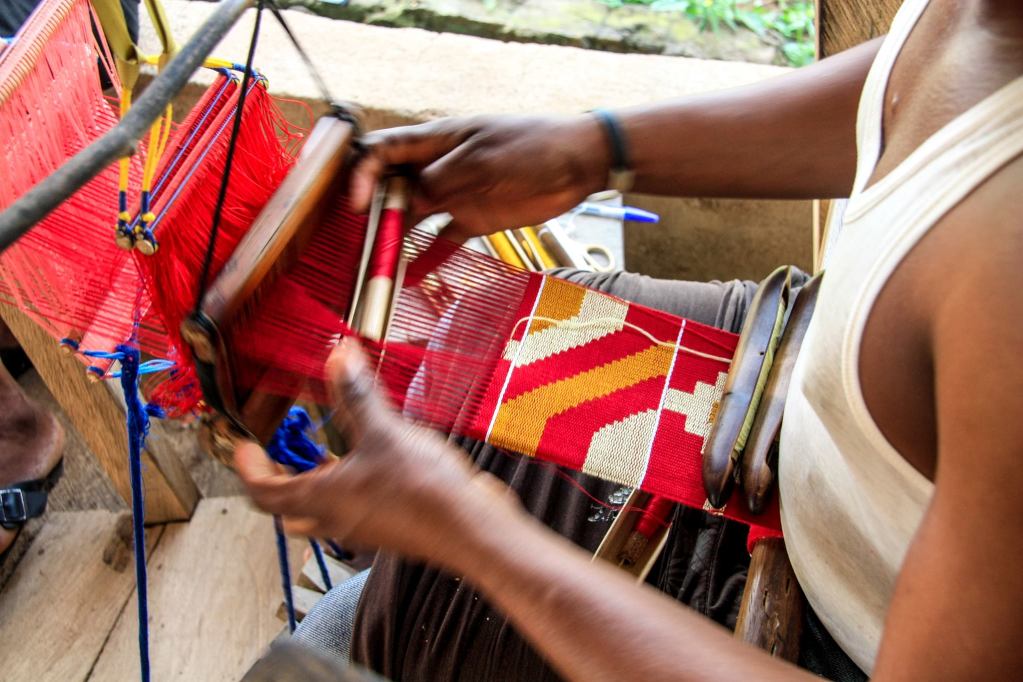 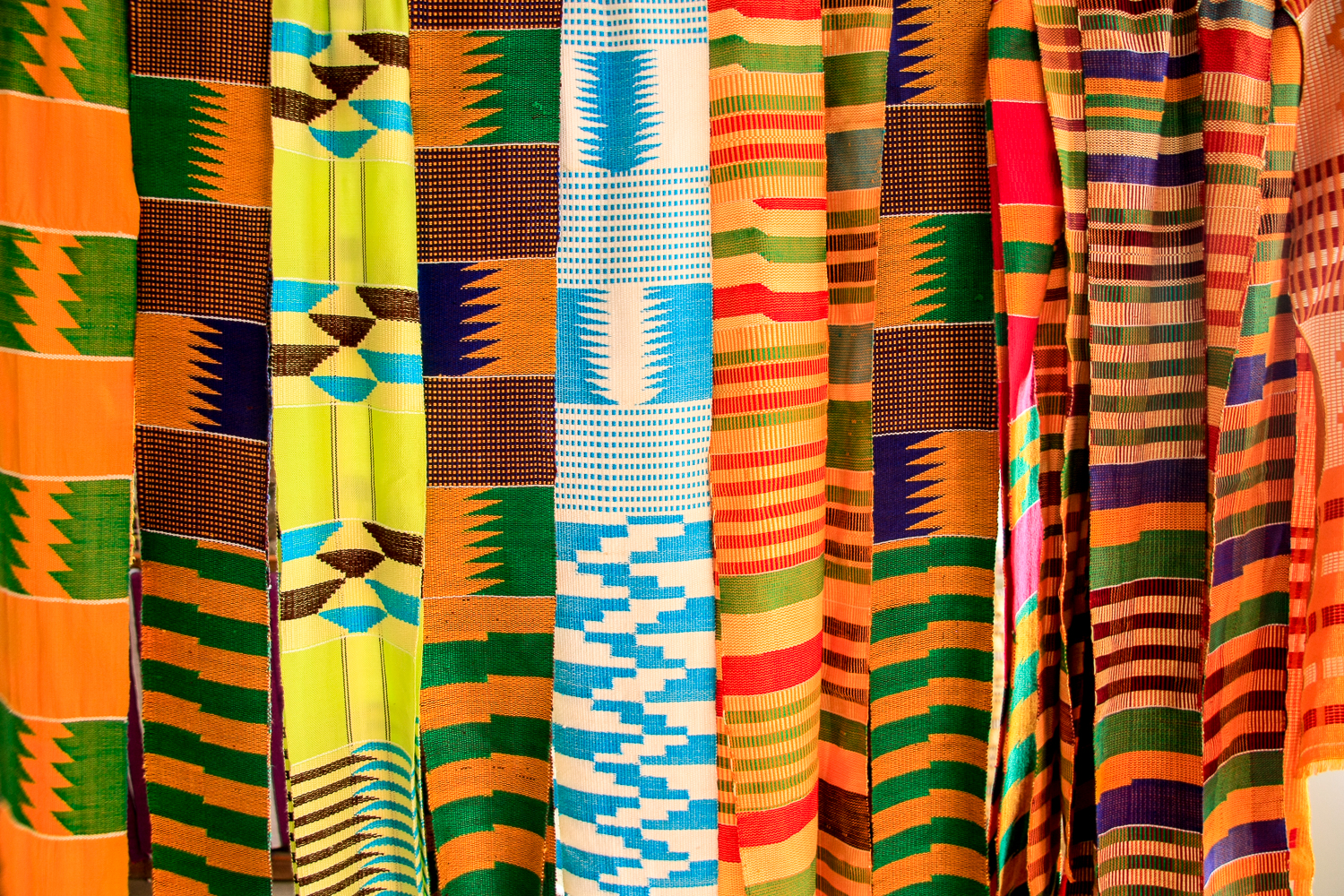 The market though, oh, the market. Kwadjo told me that unlike most places in Ghana, people here seem open to pictures. Well, not exactly… Turns out that there’s been a lot of Chinese business moving into town, copying Ghanaian ideas and doing them for cheaper. A Chinese person walking around with a camera brought immediate suspicion. That’s a shame. Still, everyone who I talked to and had one-on-one interactions with were more than welcoming. The market is several giant city blocks wide, with narrow aisles and alleys, each selling a specific category. You name it, you can buy it here. We walked through maybe 4 times and I couldn’t make heads or tails or up and down of it, yet everyone just knows the directions and how to get places.

Kwadjo also introduced me to abeteε — a pounded mass of cassava in a spicy soup, eaten with hands. Ghana loves that kinda food. Me? Still adjusting. Still gotta try that all-too-famous fufu. I had another myriad of things that I’m still not sure the names of. And in the evenings, I hung out with him and his friends outside their stall. 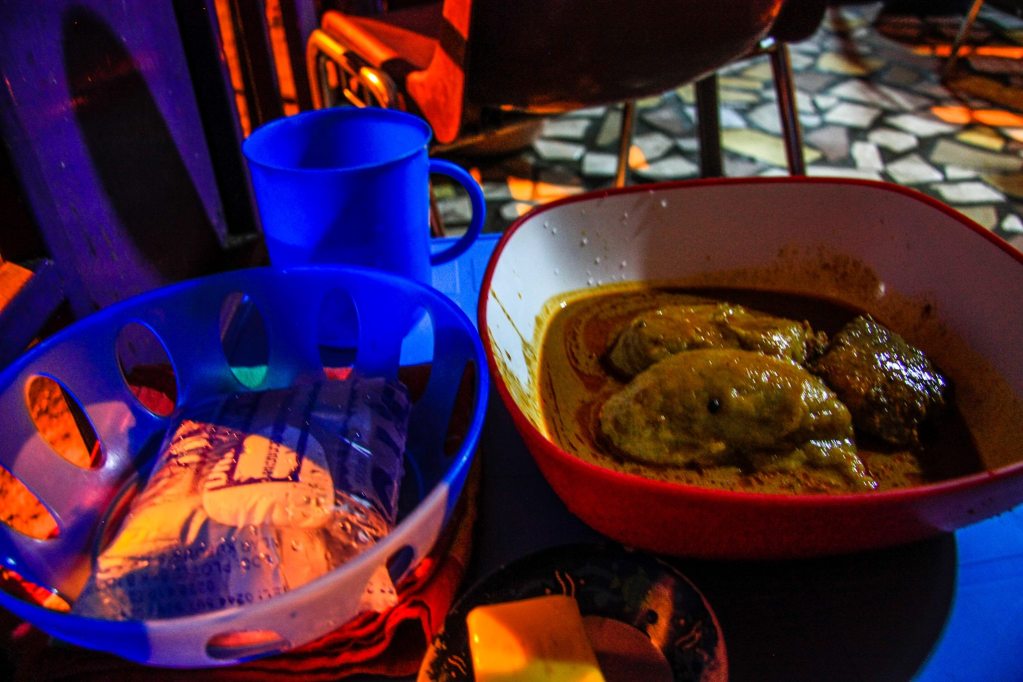 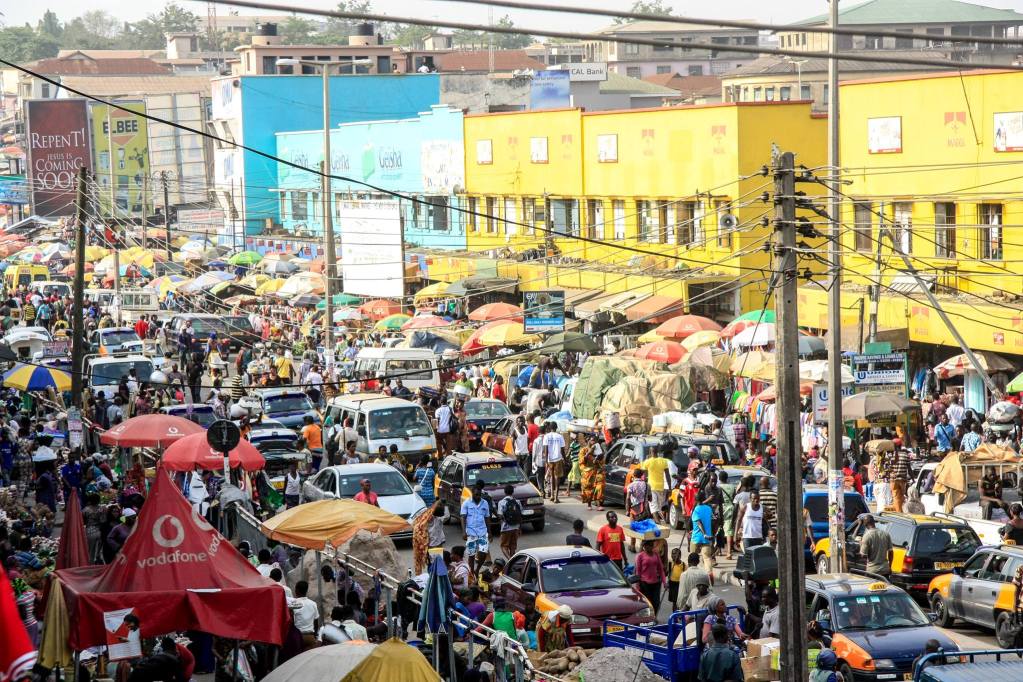 What did I do for Kwadjo? Why was he so willing to drop everything and show me around for two days, walking and sweating in the heat, sitting along with me in a tro-tro for hours, waiting for hours for me outside of places where I wanted to do a tour? I’m really not sure! Well, I did cover for him when he wanted to call one of his five girlfriends and I had to come up with some cover story (and phone her!) on why he was in town instead of in Cape Coast… And I did treat him to two meals and buy a painting off of him for a deep discount… You know, if he asked me for money after spending two whole days with me, I would’ve paid him willingly. But he didn’t. He was there, and then he was gone after taking me back to my hostel the second night. If I had a week, he said he would’ve taken me to so many more places. But I was just a chance encounter, asking him for directions on the street. I don’t even know his actual name (Kwadjo is a nickname), I don’t have anything other than a phone number, and I only know where he works. Kind of. (I still got lost trying to find his stall again by myself.)

This happened in Cape Coast, too, with Jessica and another souvenir stall owner she met, Patrick. And with Kwadjo’s friends, they provided their phone numbers to me with no hesitation and even offered me connections in Tamale and beyond. No strings attached. They tell me they help out tourists all the time, especially Kwadjo. It’s a deep kindness that I admire yet still find hard to understand. And while people don’t expect anything out of me, at least I’ve found some chances to pay it forward.

As for Kumasi? Despite the crowds and the stress, I’d love to return. There’s plenty more in the area to see, and Kwadjo’s enthusiastic guidance made me appreciate the city and see a little underneath.

One thought on “Guides”