Descending from the cool, fresh air of the mountains meant a return to humidity and heat, but heading directly to Alappuzha (still also known as Alleppey) gave me a couple days’ respite. Kerala’s crown jewel is most definitely the backwaters: freshwater canals, lakes, and lagoons dotted with lush, palm-covered islands and islets. Alappuzha is one of the more common tourist access points, and the city itself is criss-crossed with canals and boat traffic, with large, high-up bridges scattered around to cross between sides. 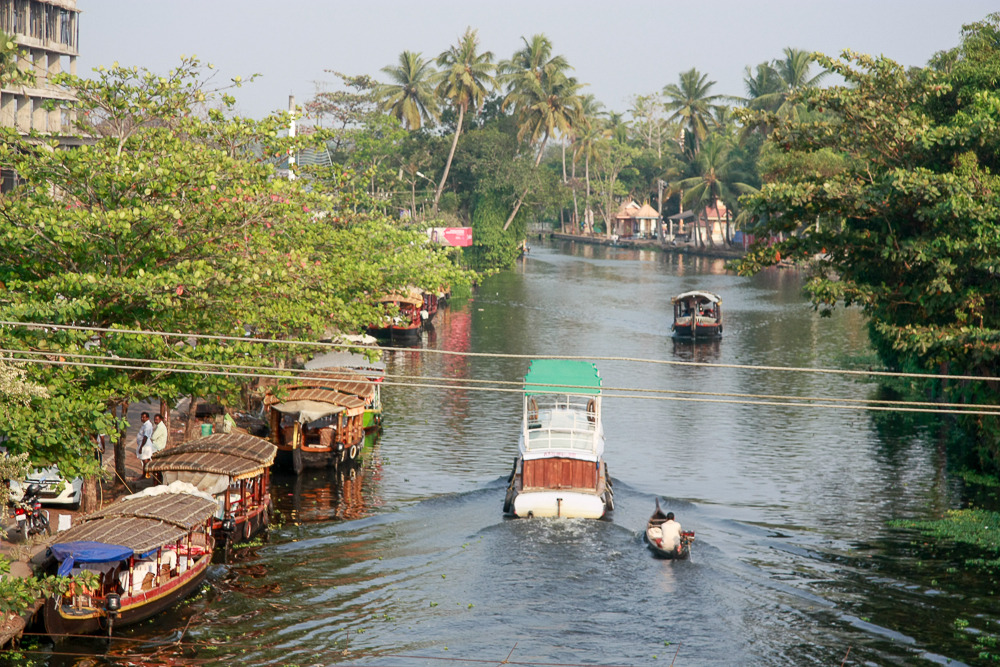 One of the more popular things to do here is to rent a kettuvalam (houseboat) and float along the larger canals. The houseboats themselves look so picturesque floating along the scenery, but being a rather expensive option, I joined three other travellers on a canoe trip, which turned out to be an option far more to my tastes — being peak season, the larger canals were full of houseboat traffic. 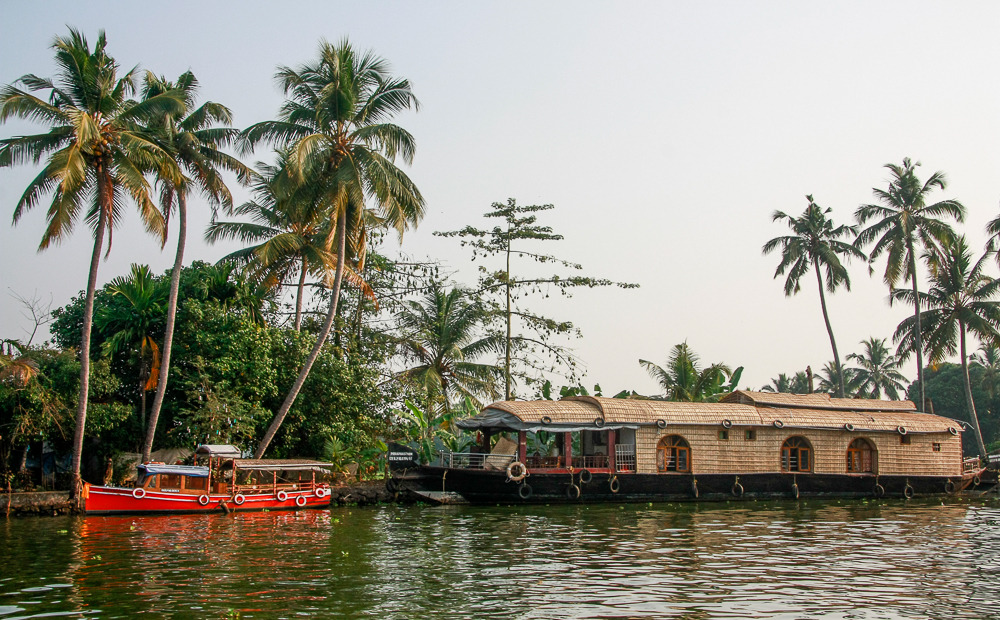 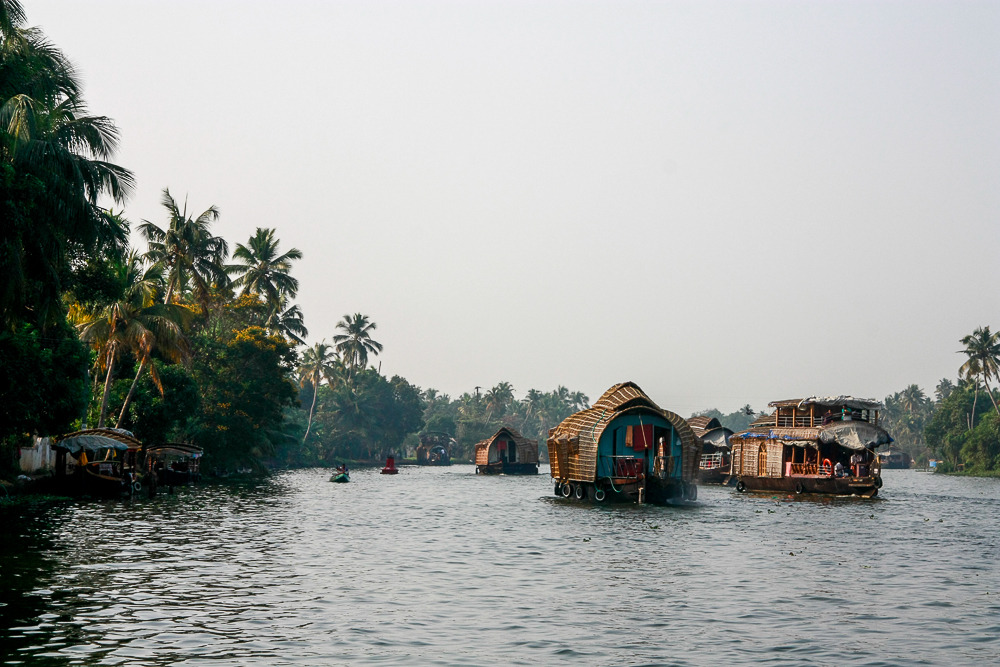 Around 8:30 am, joined by our guide, Anthony, we took a public ferry one hour to his village of Kainakary, joining the many locals just trying to get around. Leaving behind all the houseboats and resorts, the scenery soon changed to that of a slow, idyllic life, with boat stop (think of it like a bus) after boat stop of agriculture and small neighbourhoods. Pretty much every boat stop was surrounded by banners for CPI(M): Communist Party of India, Marxist, which has been in power on and off for the last 50 years, being one of the only democratically-elected communist governments in the world. I guess it’s worked for them, since Kerala has the highest literacy rate in India. With the hordes of school kids hopping in and out of the public ferry, and the private school “buses” (large motor boats, of course) shuttling around everywhere, even being disconnected by an unwalkable, undrivable, and unpaddle-able distance from a school doesn’t prevent kids from going. Makes me wonder about their after-school life though, whether they can hang out with friends who live on different islands… 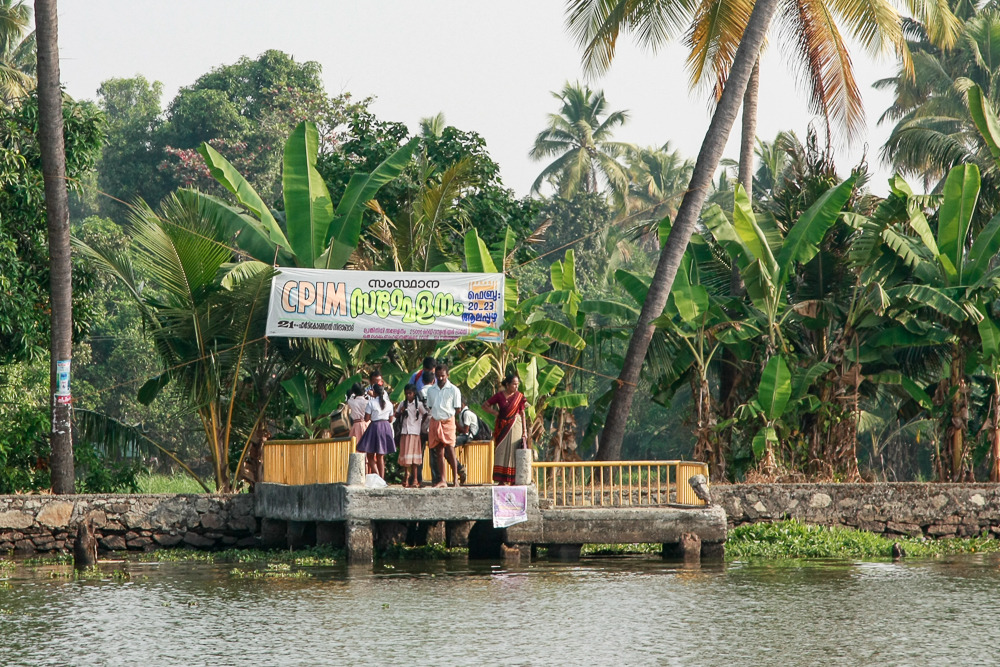 We disembarked and walked through narrow pathways and small bridges to Anthony’s house — new and unfinished, since his old one, next to the new one on the same property, had flooded last season — where we had a quick breakfast (and upon our return, lunch), before hopping onto his little covered canoe on a side “street”. 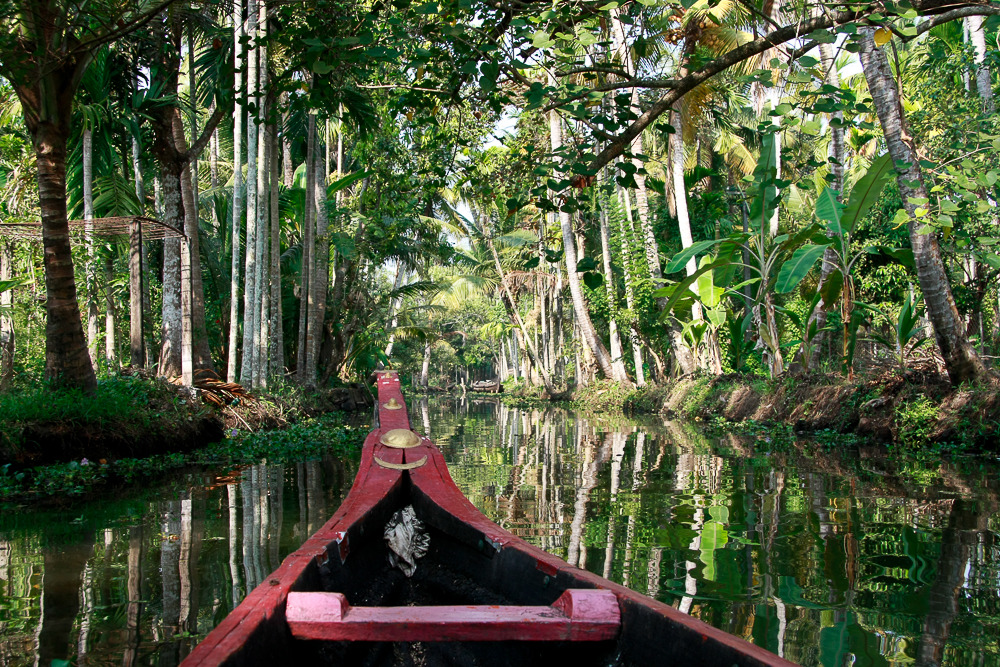 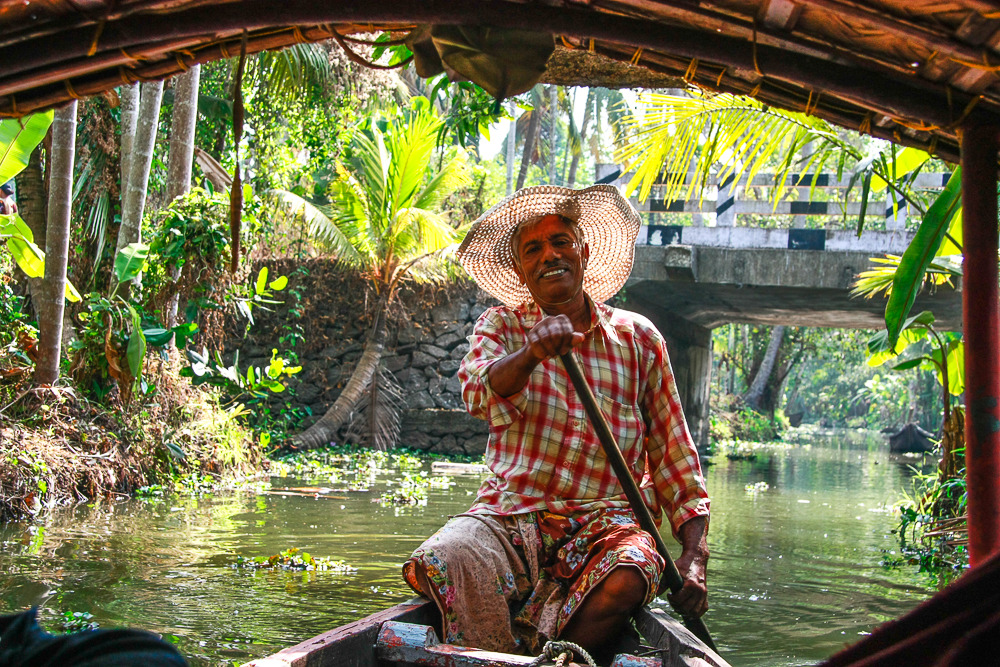 It’s incredibly peaceful to drift along lily-covered canals, shaded in palms, with the only noise being the sounds of paddling and the occasional kingfisher or heron. I completely lost my sense of direction as Anthony took us around the neighbourhood, passing people washing their clothes, maybe bathing in the canal too, other people paddling next to us, the newspaper man on his boat… People were all smiles. 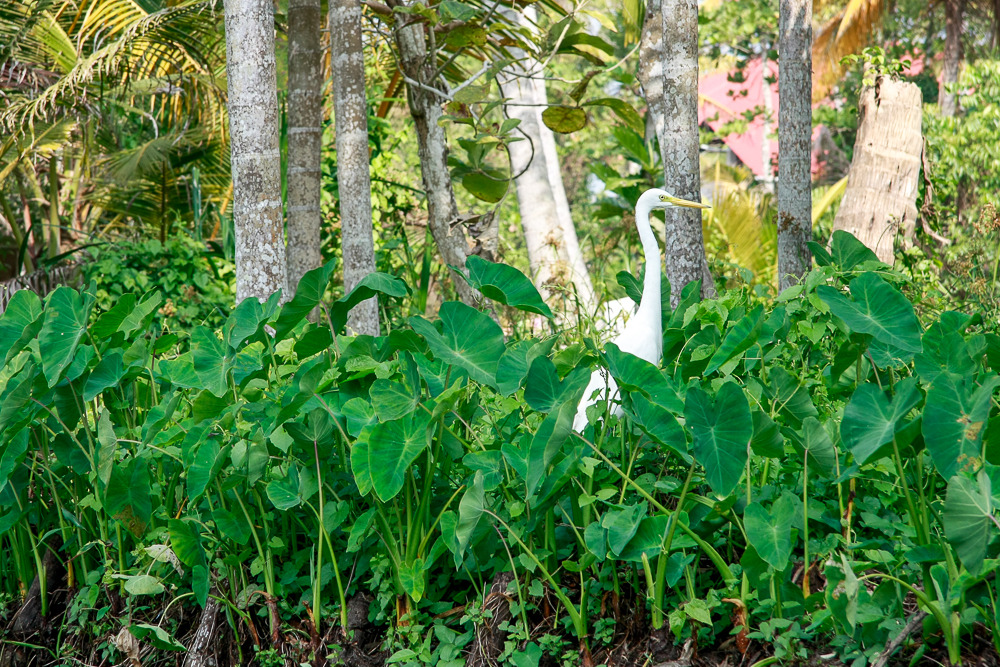 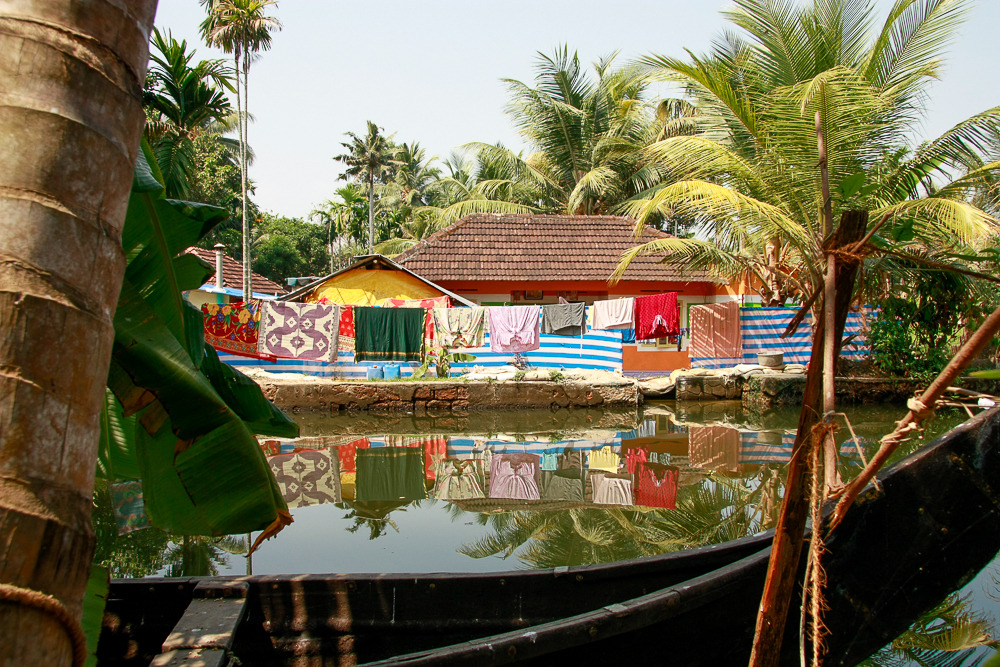 We parked our boats for a bit to enjoy some fresh coconut juice and walk around, passing some rice fields, a school, and a Catholic church dedicated to a local son recently declared a saint. Everything next to the water. 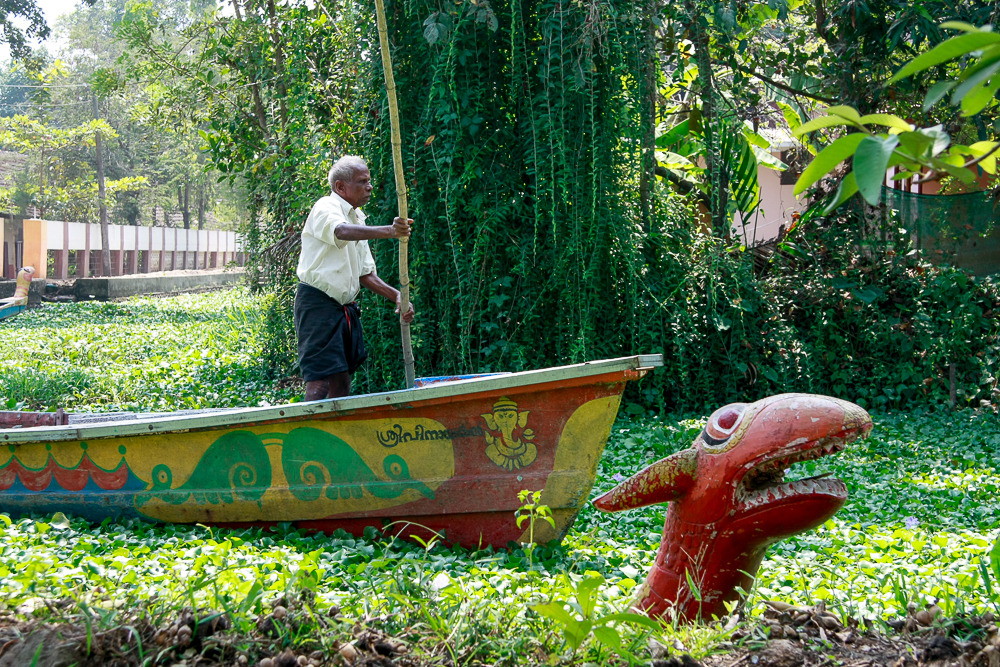 As we approached the larger channels again, it was still peaceful — we weren’t anywhere close to the houseboats anyway. Maybe the occasional school-boat or ambulance-boat, or a small canoe carrying a few people and a few construction supplies, or perhaps even the public ferry. In lieu of running into people walking down the street, Anthony ran into friends and acquaintances — whether passing in a boat or on shore walking next to us — just paddling around. Just regular life all around, and these people have found a way to live with the water and use it to their advantage. With the regular rainy season flooding, and the nearest city being an hour away on a scheduled motorboat ferry, I can’t imagine it being easy, but I can clearly see why people (at least those who have a choice) live here and stay here — every person we passed, every person on the public ferries, they’re all interacting with the environment.  They stare out and admire the beauty just as us tourists did, and they see this every day! 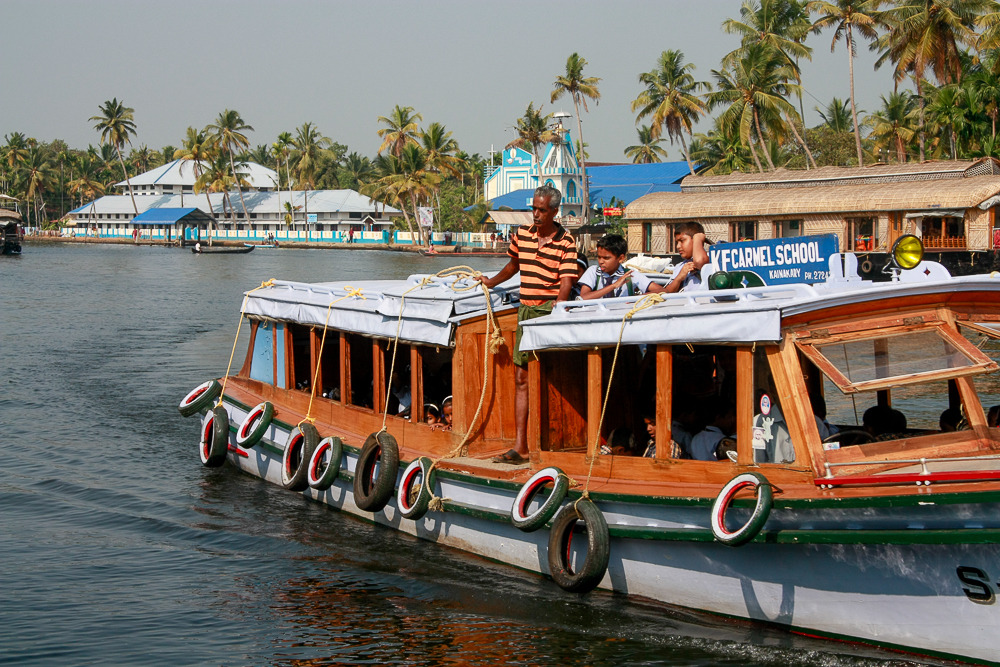