Screeching tires on every hairpin turn. Passing smaller vehicles, or at least vigorously honking at them, on a one-lane mountain-side road. Radio reception dropping every so often, rudely interrupting whatever Hindi or Tamil film song I was bopping along to. Getting hit by branches through the pane-less windows every few seconds. Me, literally flying out of my seat every few seconds. (Don’t sit in the back of an Indian bus.) Such was my final Tamil Nadu bus ride of five hours, going from dry plains to steep mountainous forest, and my first stop in Kerala. I actually did get a little light-headed, both from the relatively quick altitude gain and just general motion-sickness.

Then all of a sudden… tea. 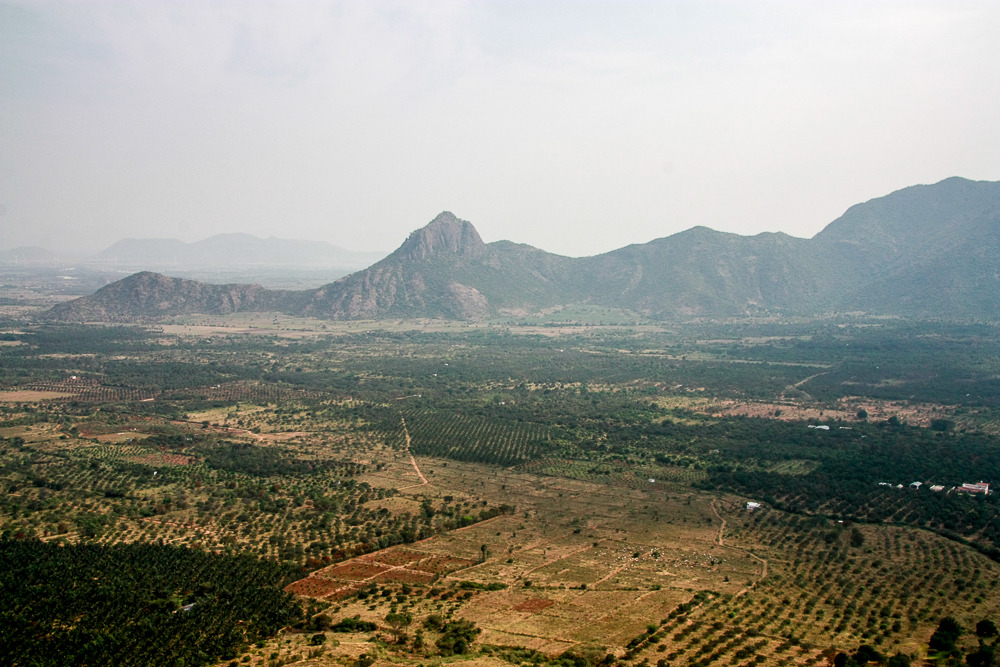 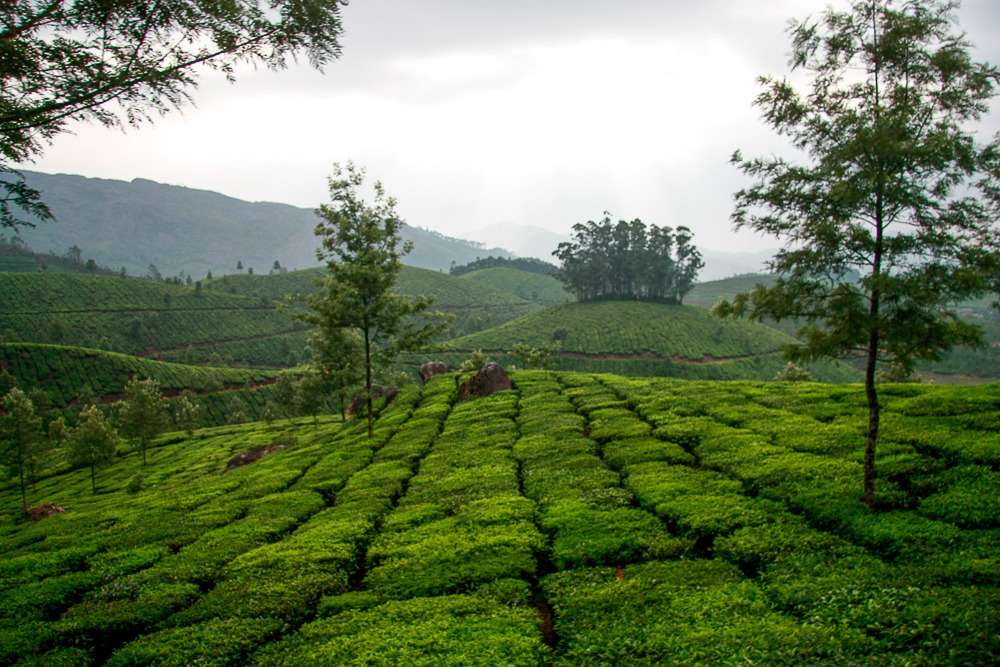 Beyond the sheer cliffs and mountains, the view clears into what I can only describe as jaw-dropping. Hill upon hill of manicured tea trees, in rows, in zigzags, in mazes; all of uniform height, giving each undulating hill an unnerving rotundity not unlike a ’90s-era Super Mario Bros. level if you added eyes to them. The colour? An extraordinarily lush green. It fills your vision, and it just doesn’t end.

I was simultaneously relieved and sad the ride was over, when arriving in the hill station town of Munnar. After finding a guesthouse a 20-minute walk away from the centre, it was already dark, so I returned to the centre. Far from being tranquil and quiet, I enjoyed the masses of Indian tourists swarming the bazaars, buying tea, spices, and local chocolate, and for dinner shared a table with a lovely local couple and their child. We sat together for what must’ve been at least half an hour and enjoyed each others’ company, but given limited English, I swear, these were the only words we uttered to each other:

In between, practically every other interaction we had between each other consisted of variations of smiling and head-bobbling. Oh, India.

I joined a small tour (shoutout to Lauriane!) at 6:30 the next morning. After some black tea, we walked maybe 5 minutes before we were greeted by stunningly gorgeous scenery under mist and morning sun — rivers, small villages for the tea plantation workers, and of course, the plantations themselves. Gradually, as the mist burnt off, the green began to shine. 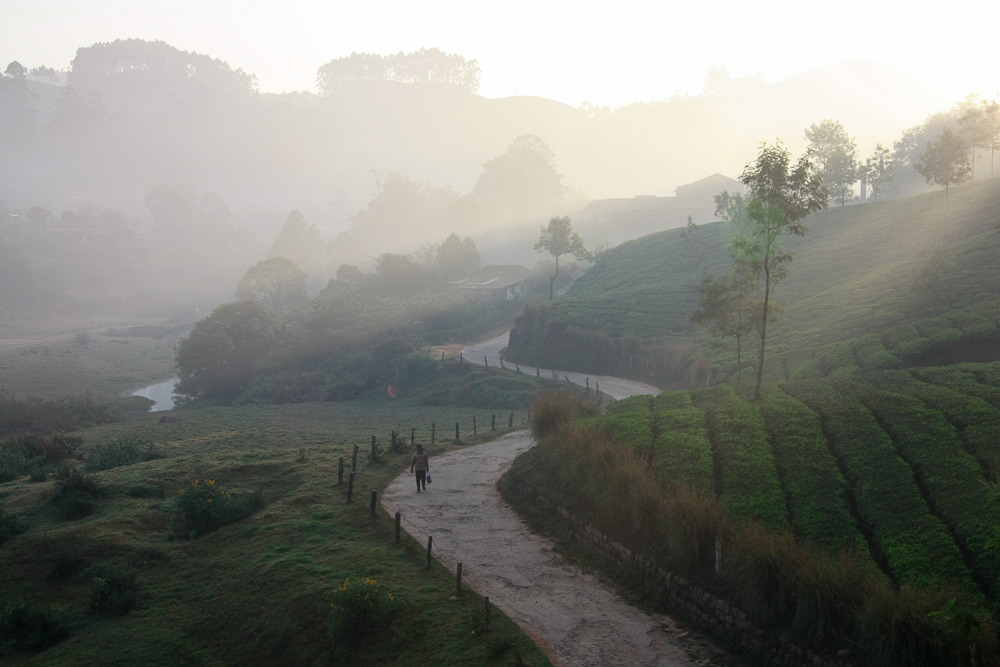 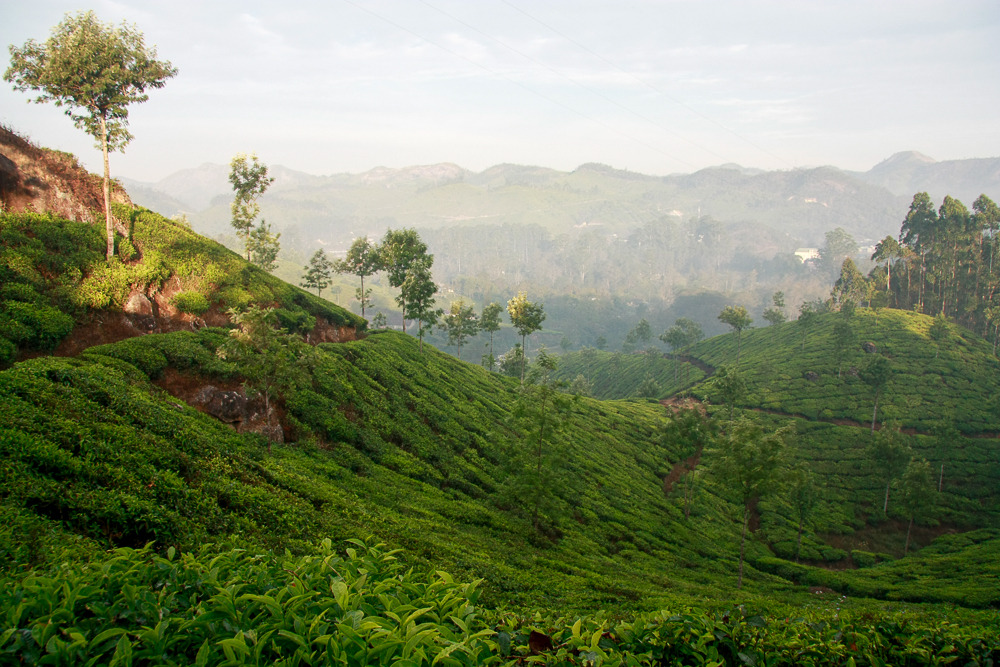 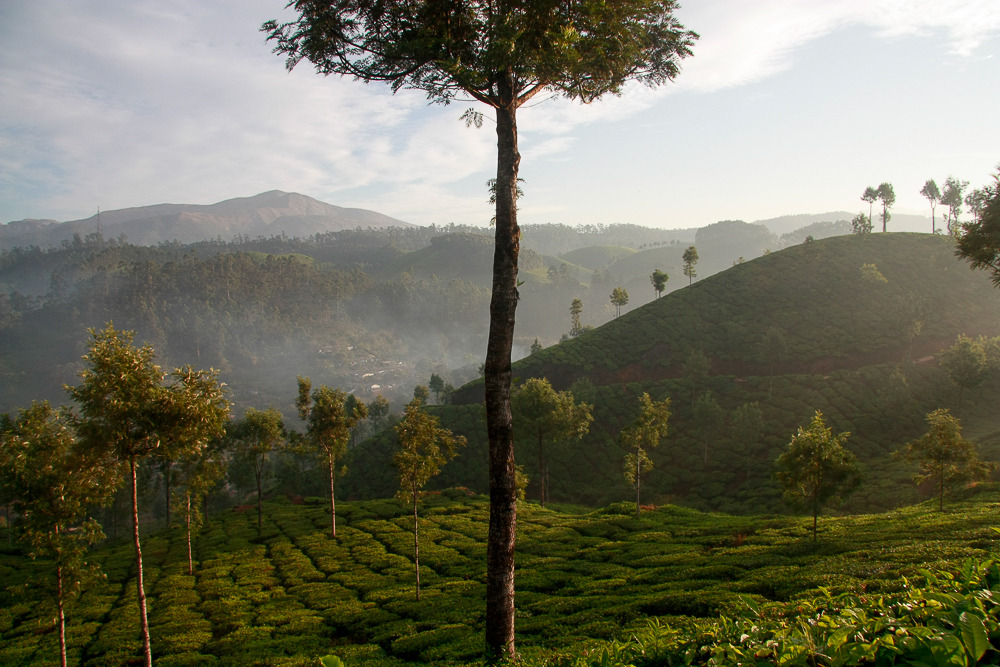 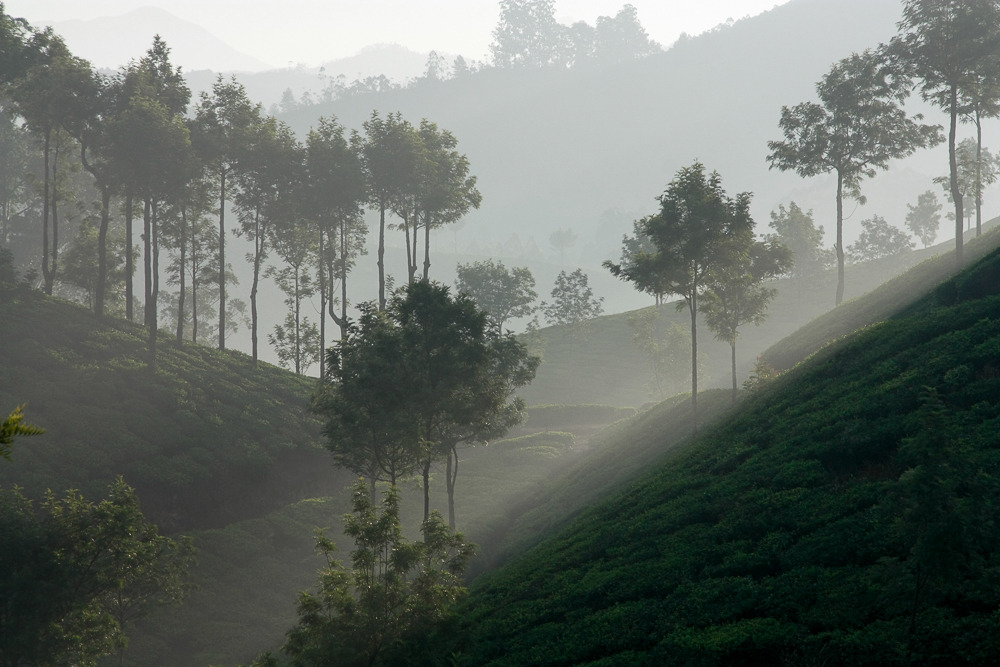 As we hiked up to a 1800m peak, our guide, Shree, gave us a bit of a history lesson. While the discovery of favourable tea-growing environments in India was indeed made by an Indian, it was the British during the colonial age that capitalised on it. As for the hills around Munnar, they had all the existing forest razed, replacing it all with tea.

Tea is cultivated from camellia shrubs/trees, though they look like bushes — they’re actually trimmed down to that height. White (bud), green (small leaf), and black (large leaf) tea all come from the same plant. They thrive in an agreeable climate with sloped terrain, but I gotta say, some of these tea estates are steeeep! Given how entire mountainsides are covered exclusively in one shallow-rooted small plant, there needs to be something to stabilise it in case of landslides, and that’s where the larger silver oak trees come in — they also provide some needed shade for workers. And perhaps something to lean on too, given how rain makes those steep slopes even more slippery. 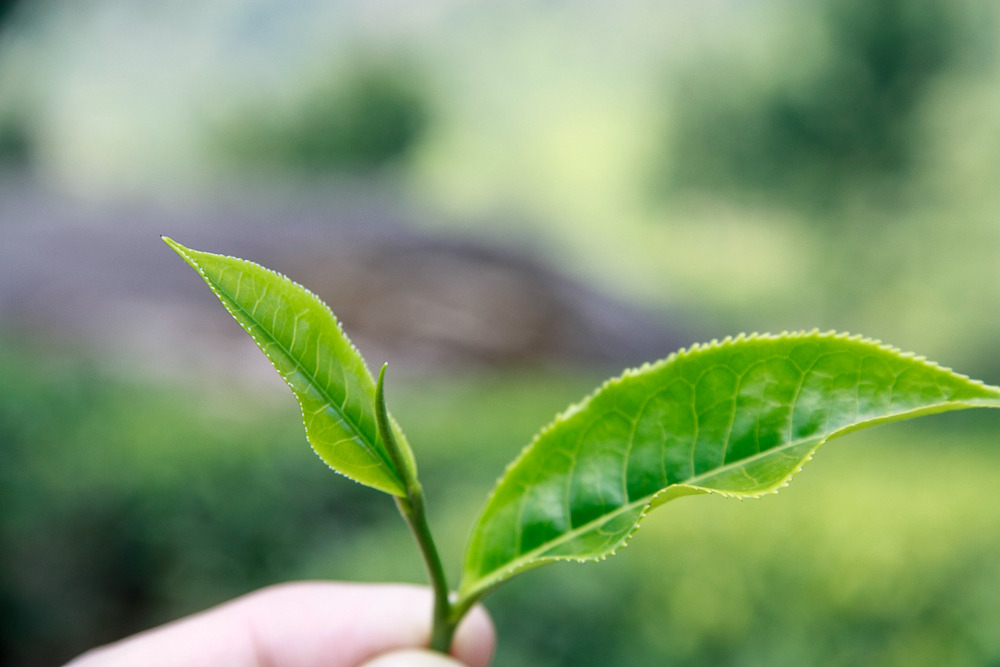 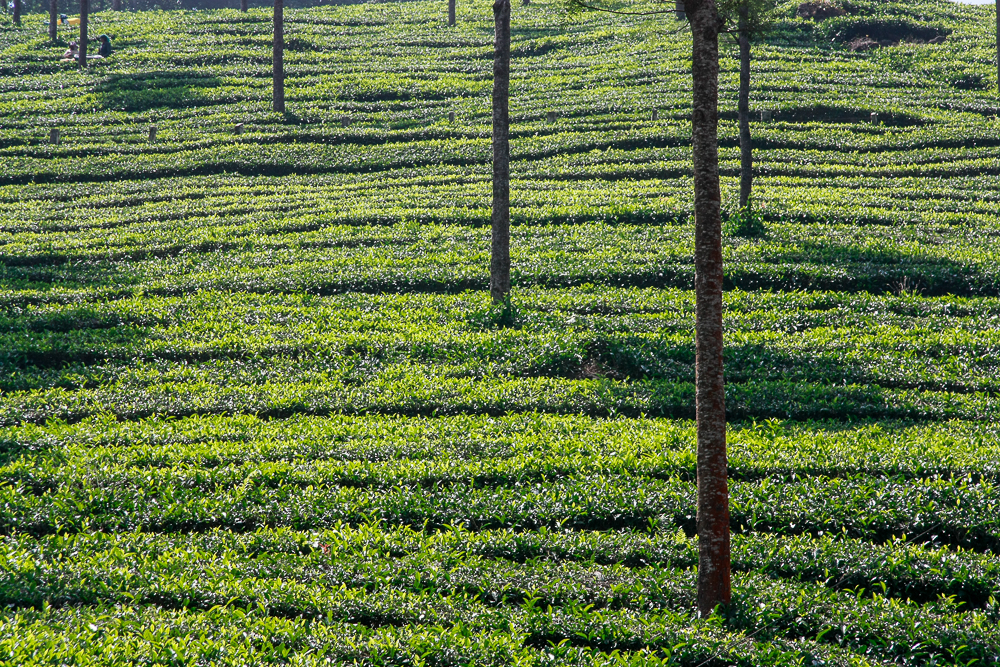 There are plenty of people working in the tea fields, with mostly women plucking and men cutting, as well as a whole host of maintenance and adminstrative positions. In exchange for the rather grueling manual labour, the British would provide them housing, health benefits, sports fields, and a pension at 58. Upon Indian independence, ownership transferred to Indians, with a vast majority now controlled by the Tata empire (think cars), who have not changed the benefits. Not bad! For meeting their daily tea quota of plucking 10 kg, the salary is roughly Rs. 330 (< US$6, but a decent amount of money in India for unskilled labour, well above minimum wage); give or take some depending on how much more or less they pluck. Despite being in Kerala, the tea hills in Munnar have a far larger Tamil population, many moving from Tamil Nadu for the work.

After enjoying breakfast with an exhilarating view, we descended through some lush forests of original growth, then swapped guides for our walk through various spice plantations. Alvin recounted how his brother became an engineer in Chennai — his father worked the tea and spice plantations daily for years to save up 50 lakhs (Rs. 5 million; over US$80,000) for his private university education. As for Alvin himself? Public schooling.

Greeted with only the sound of birds, we somehow end up wandering through not just plantations, but various people's backyards, and with their permission, we try some of the myriad fruits and spices growing everywhere. Cardamom, coffee, peppercorns, tapioca, chili peppers, nutmeg, cacao, cloves, jackfruit, mangoes, papayas… the list just goes on and on. The strong fragrance when biting into a cardamom seed, the fire of a peppercorn off a vine, the light and oddly somewhat citrussy cacao fruit, the mouth-freshening qualities of cloves, the aroma of nectar leaking from an inedible baby mango… It was a walk I won't soon forget, and Alvin was enthusiastically knowledgable about all the plants and flowers we encountered. 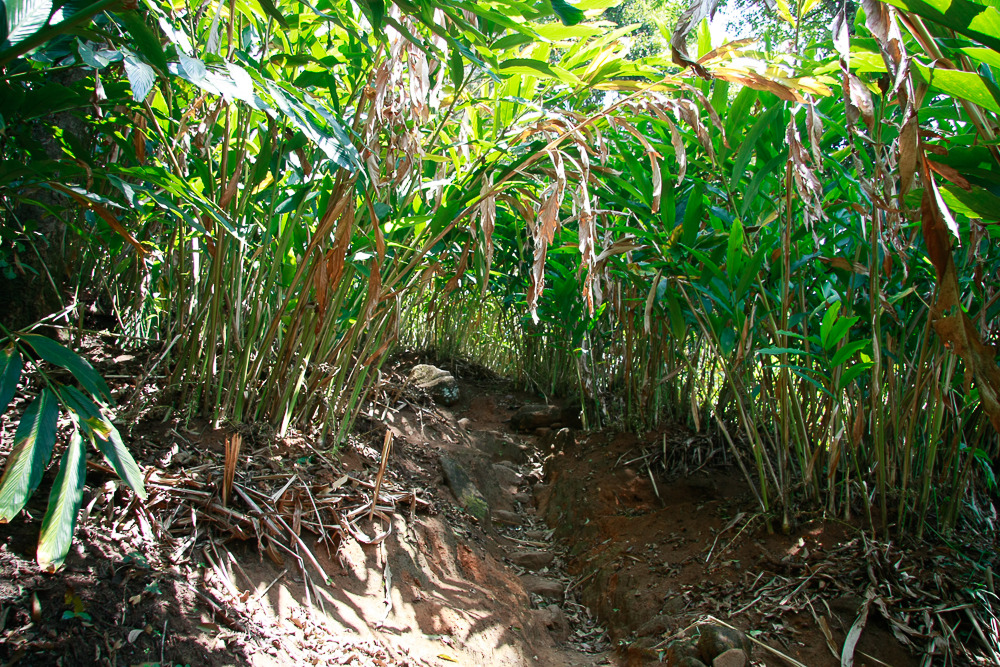 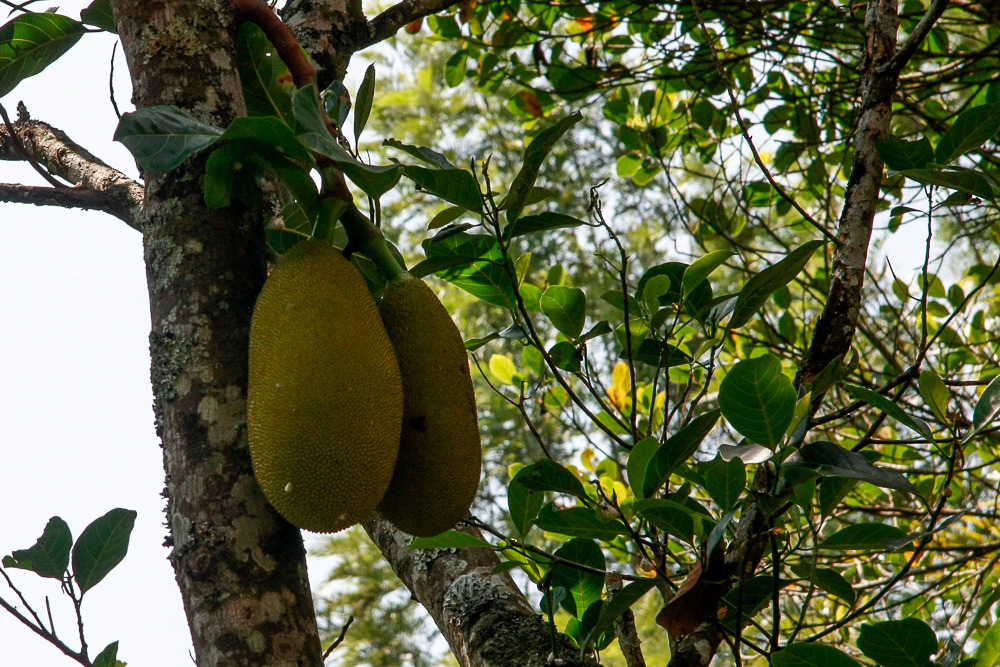 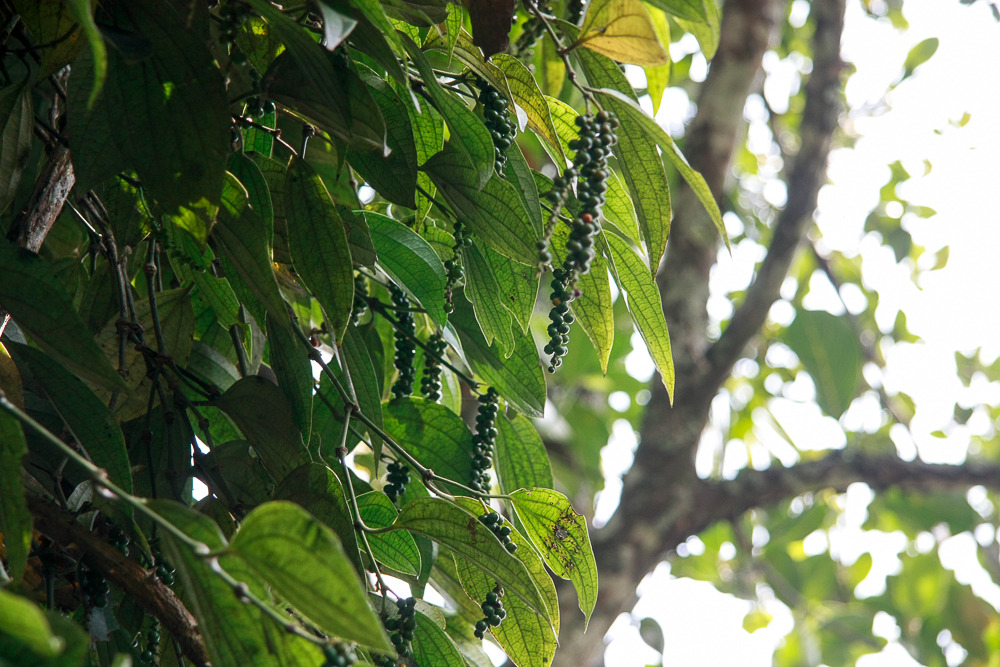 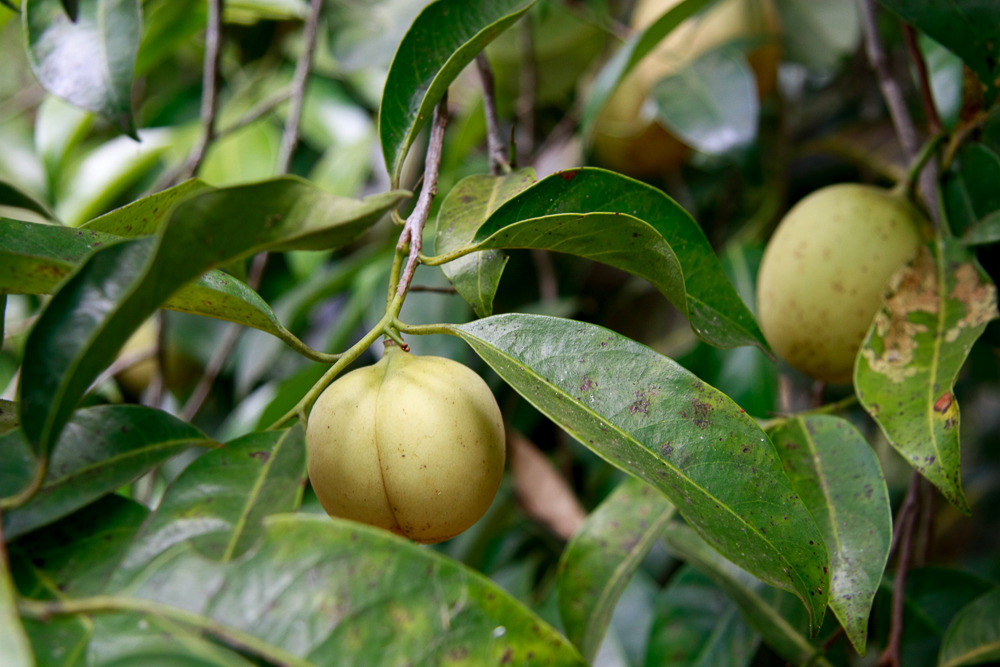 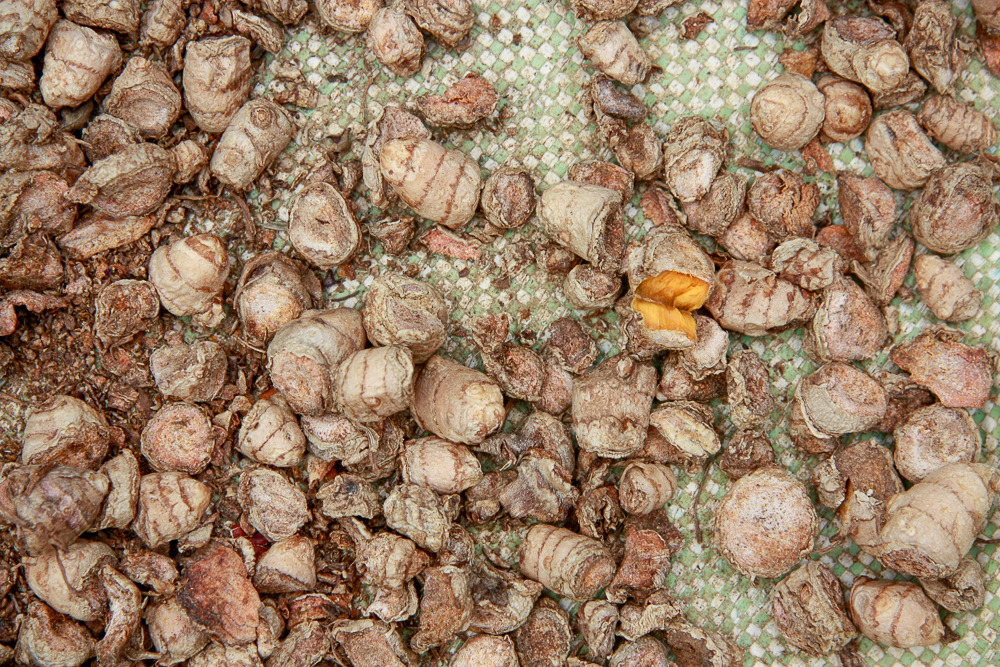 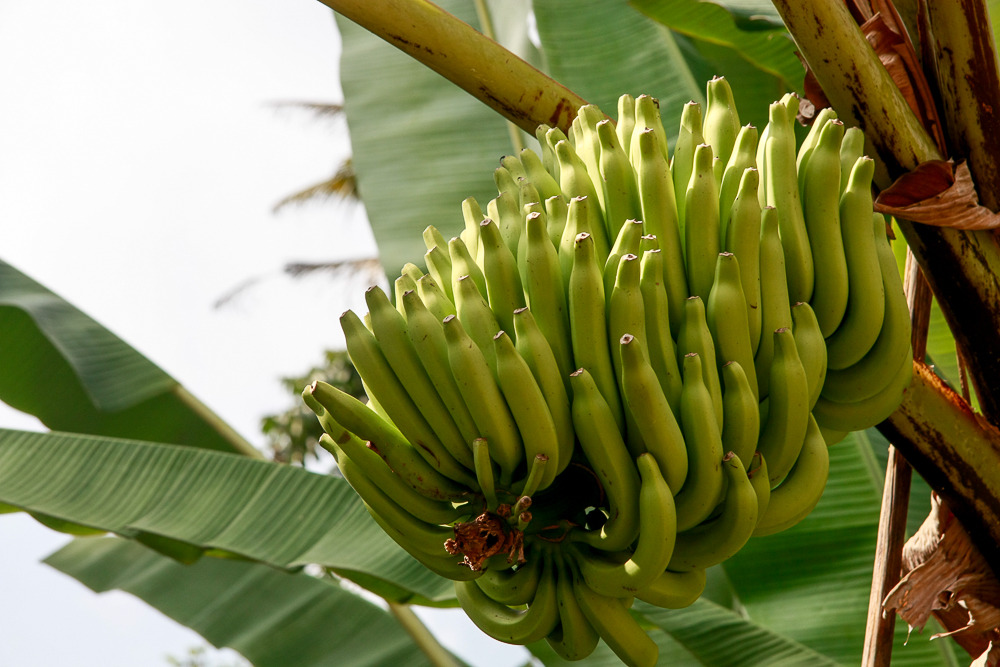 I hadn’t had enough though. I don’t think I ever can. 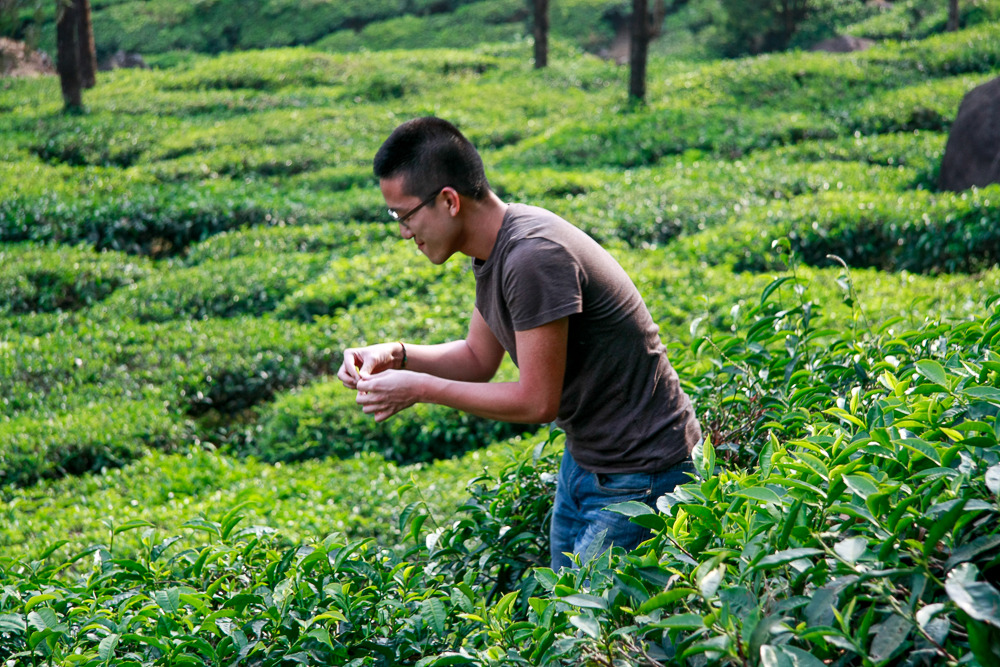 On the morning of my departure, I got up at sunrise and just walked down the road a little, before veering up into the hills. No one around, no noise. Just me, some mist, the rising sun cutting through, and row upon row upon row of tea. Pure bliss. 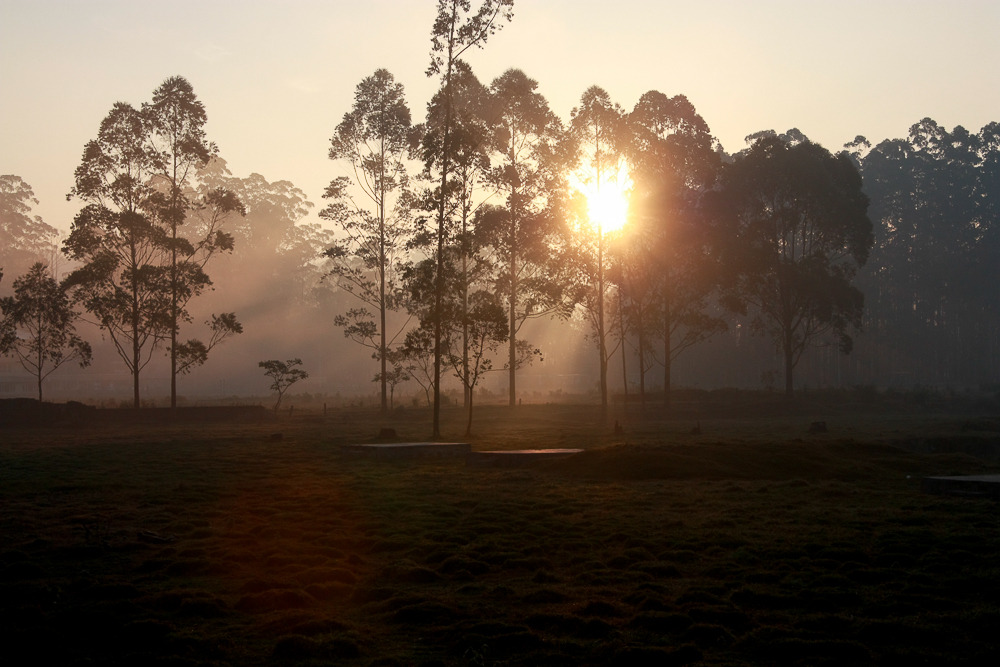 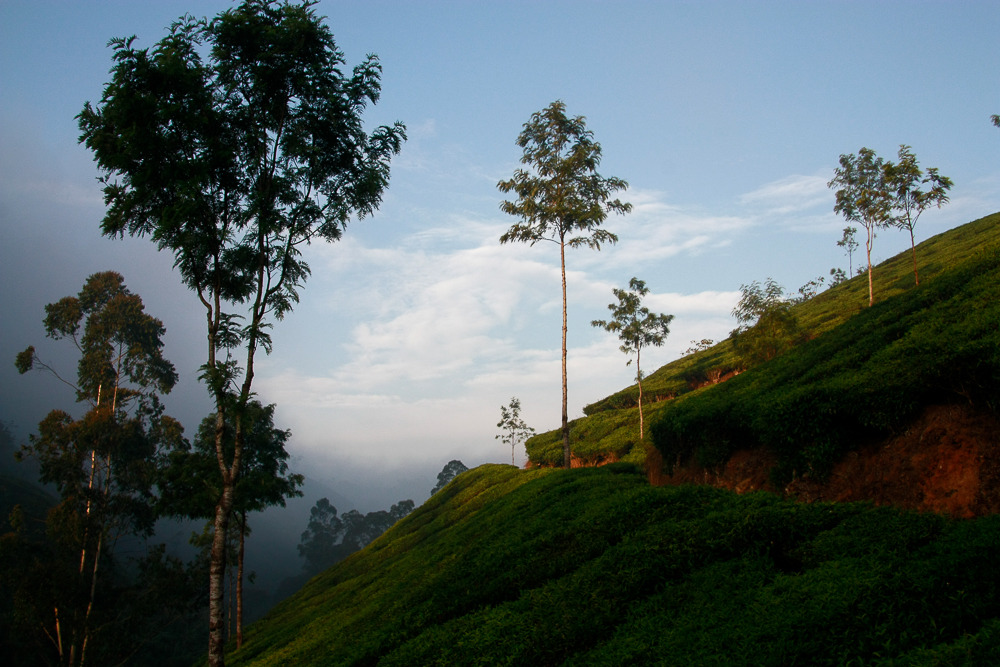 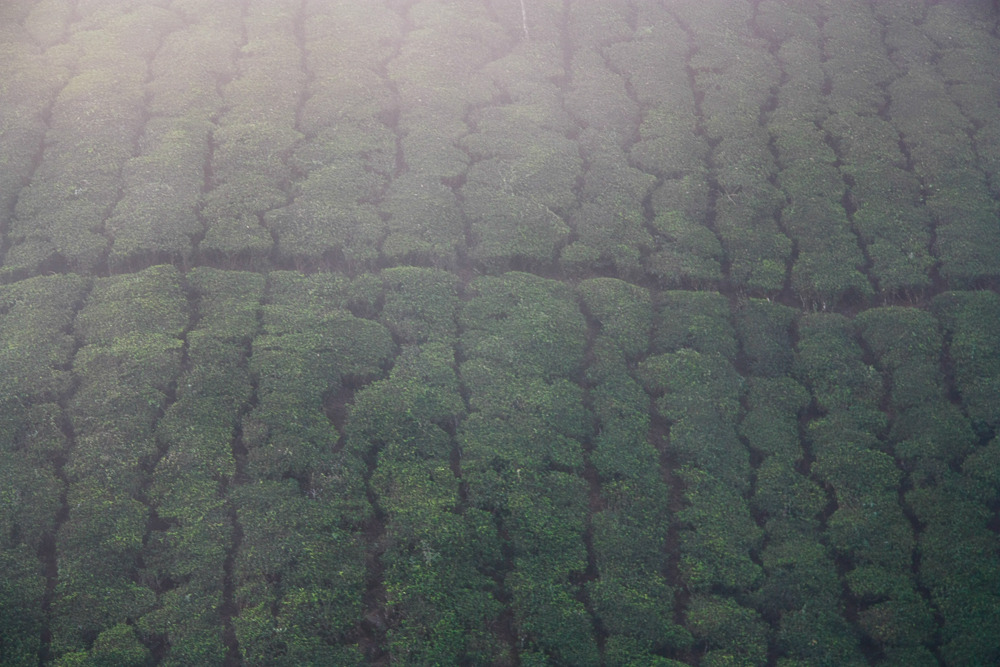 Then, a cup of well-steeped tea with breakfast. Why did I ever leave this place?