Upon Uncle’s recommendation, Therese and I headed for three cities and three temples in three days — one per morning, before the heat makes it uncomfortable. First, we bussed over to Chidambaram.

Buses in Tamil Nadu (and by extension, other states in India) are a rather hectic affair. Go to the bus station (or the side of the road if you’re joining in the middle of a route, whereby you’ll have to jump on quickly as the busses almost never make full stops), ask 10 people where the bus to your destination is because all the signs are in Tamil, hope that they’re pointing you to the right place because everyone tries to be helpful and provides an answer even if they don’t actually know, wait for the bus to depart the station, then tell the conductor your destination and pay him, bracing yourself for any number of unexpected bus changes necessary to reach your destination. Given the jam packed crowds, it may be awhile before the conductor reaches you and provides you the answers that you need. Ah well, it all works out.

Chidambaram’s prime attraction is the Nataraja temple, dedicated to the story of Shiva’s incarnation as the Nataraja, the Lord of the Dance, who defeats the goddess Kali in a dance contest after he pulls a move that she could not replicate, sticking his leg straight up. It’s this pose that recurs in this temple’s art… And about this time when I wish I had paid more attention in my Eastern Religions class. There’s a far more complex history and background story to this temple and all the others that we visited. 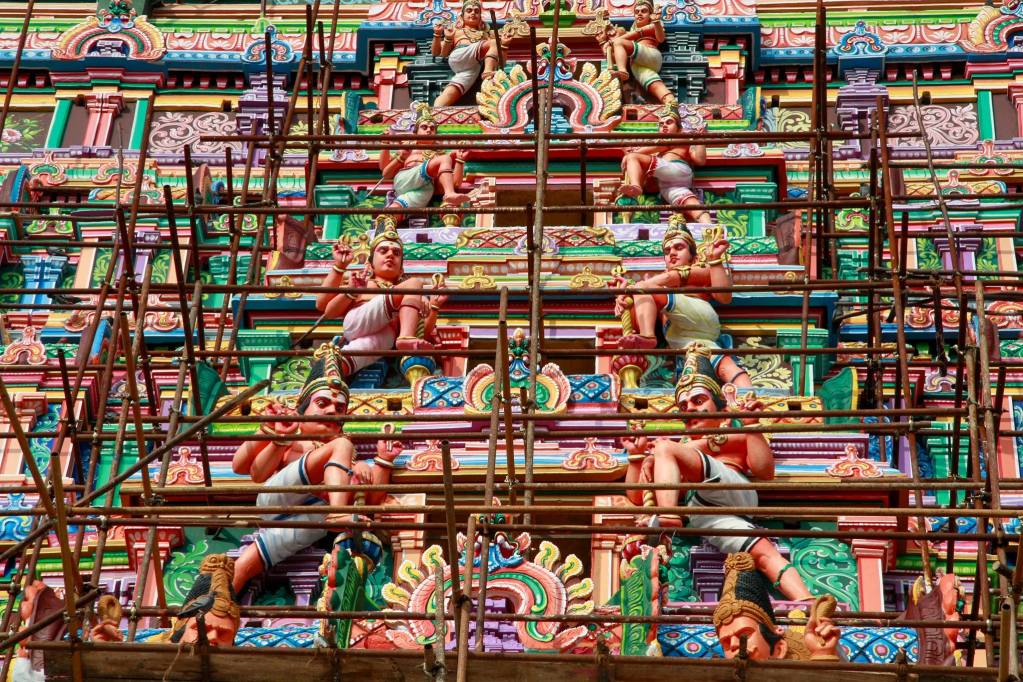 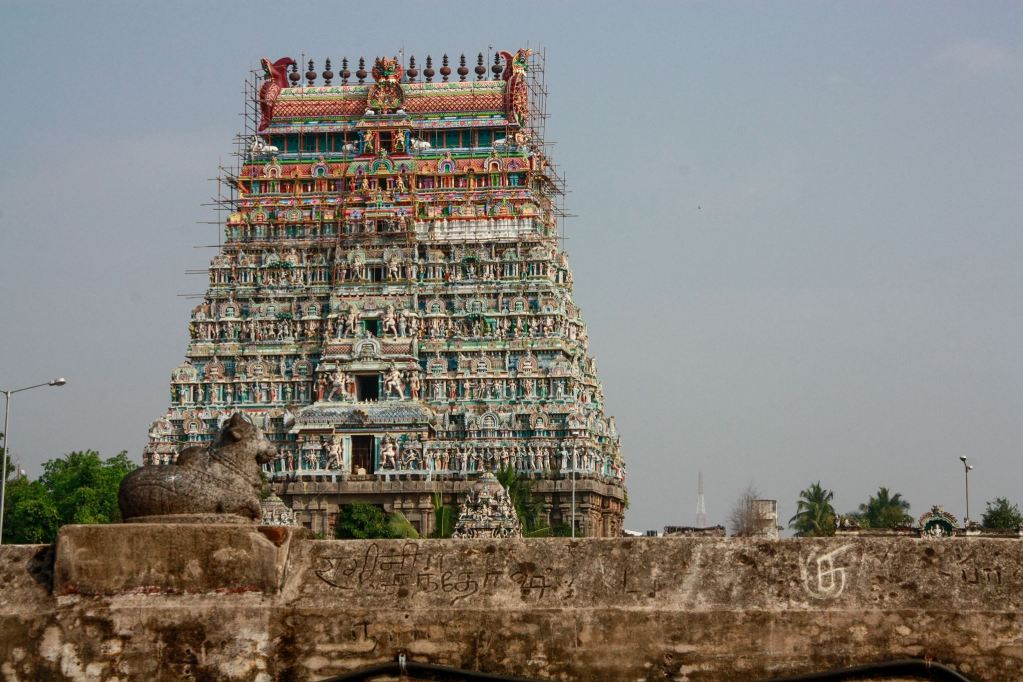 The temple is a prime example of the architecture of the Chola dynasty, with shrines dating as far back as the 6th century. At each of the four entrances is a giant (seven stories?) tower called a gopuram, a beautifully ornate and colourful trapezoidal structure with depictions of deities on each level. Inside the temple is a bunch of inner sanctums, unphotographable, with art lining the ceilings and walls, carvings on the pillars, and intricate kollam (geometric drawings) on the floor. Touring one of the shrines, containing a golden statue of a deity, we were given holy water (kinda bitter!) and had a little turmeric smeared on our foreheads. We then circumambulated the shrine and found pictures of deities where worshippers had also smudged turmeric on their foreheads, left offerings, or lit candles!

Names are confusing here. Thanjavur? Or is it Tanjore? Pondicherry, or Puducherry? Mamallapuram, or Mahabalipuram? Chennai, or Madras? Uncle told us that politicians tend to rename places to score political points. People often use the old names, often from colonial times, interchangeably. (Justifiably so! Look at Trivandrum, or as it’s now officially called, Thiruvananthapuram, which barely fits on road signs…)

People names also threw me for a loop. In Tamil Nadu, people go by one name, and take their father’s or husband’s name as a prefix or suffix, usually just rendered as an initial. It’s always Mr, Miss, or Mrs. first name. Now how did that slip past me after a year in Tamil-populated Singapore?! 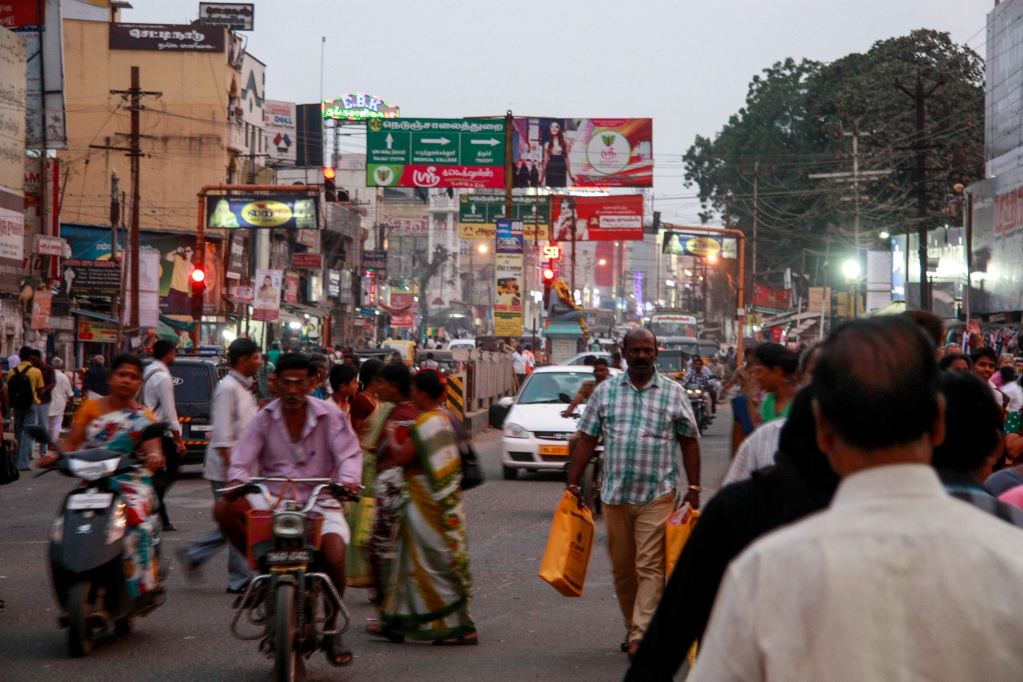 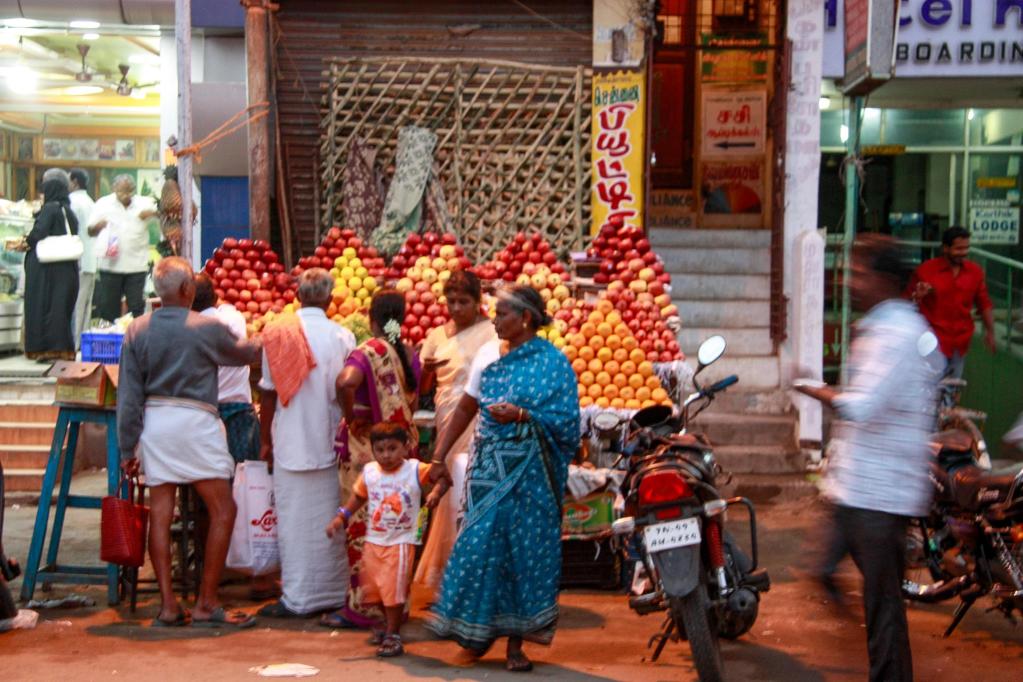 Thanjavur’s claim to fame is the Brihadishwara temple. We arrived early the evening before and had a quick peek, watching a litany of worshippers pay respects, before visiting again for real in the morning. Not before hitting up the local amusement park though. We passed on the Ferris wheel after seeing it spin a mile a minute though… Nonetheless, being in a big, bustling city again and enjoying the lively evening was a nice change of pace. 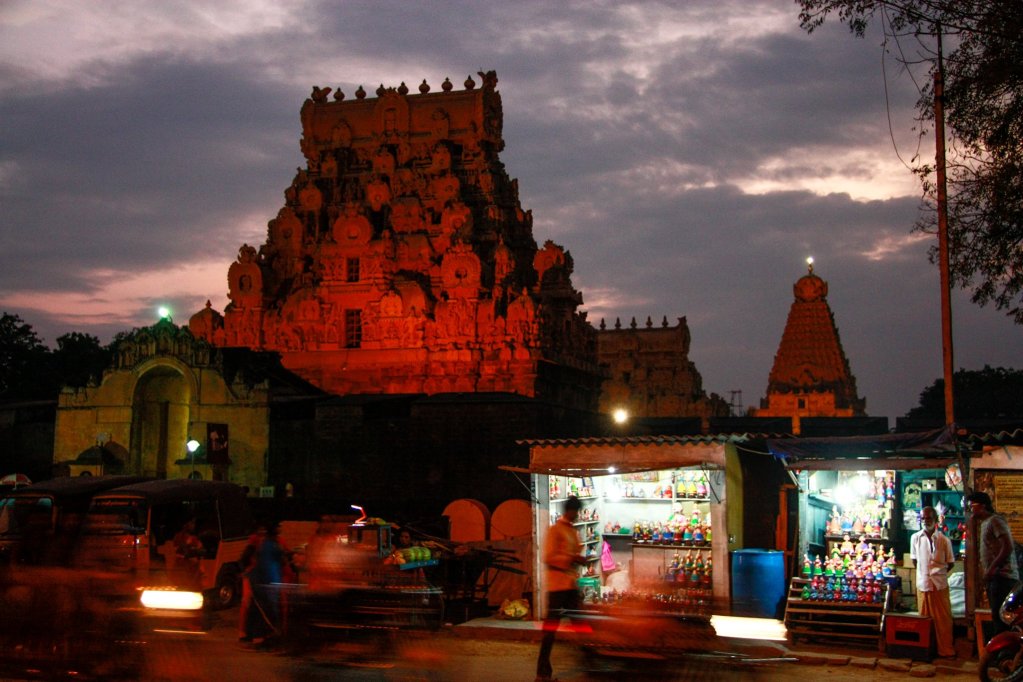 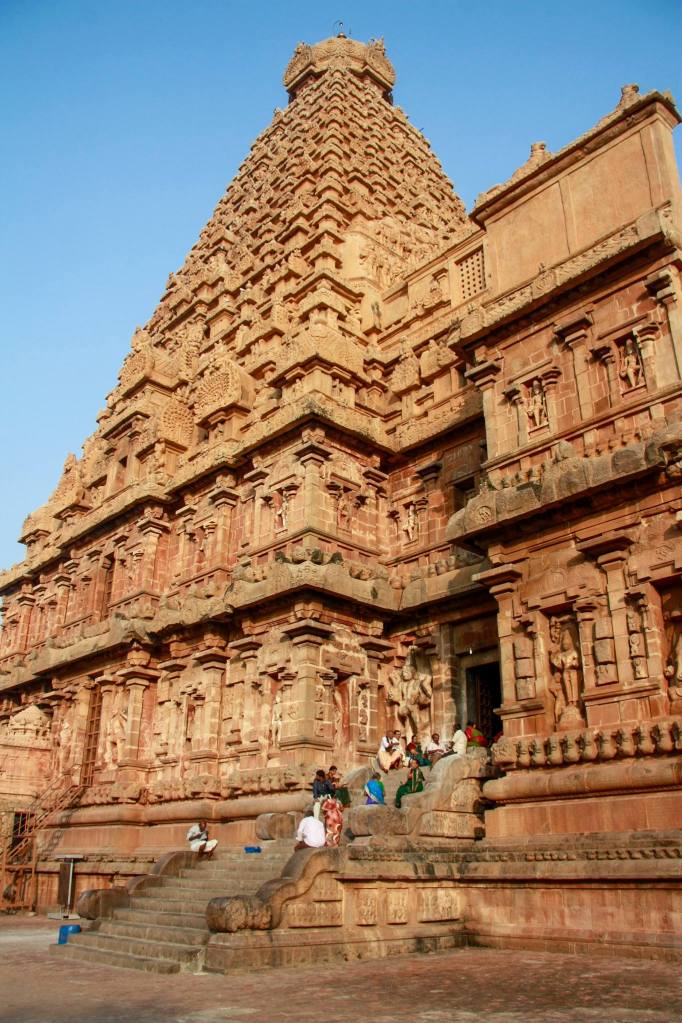 We revisited the temple, dedicated to Shiva and his steed, the bull Nandi, in the morning light, which gave it a pleasing orange glow. Before leaving town, we made a visit to the former Royal Palace grounds as well, a mishmash of Hindu objects from the 9-19th centuries, in courtyards and buildings alternately magnificent and in complete neglect. The highlight of that was probably the library, with its eclectic collection of languages, examples of tiny writing, and even paintings depicting a litany of torture techniques and hypothetical human-animal hybrids. Huh.

India seems to treat politicians like movie stars. Everywhere you go, there’s a giant billboard with the blown up face of a politician and his or her party, all with dramatic backgrounds and photogenic poses. They’re just displayed in large intersections, next to ads for products or condos or whatever. 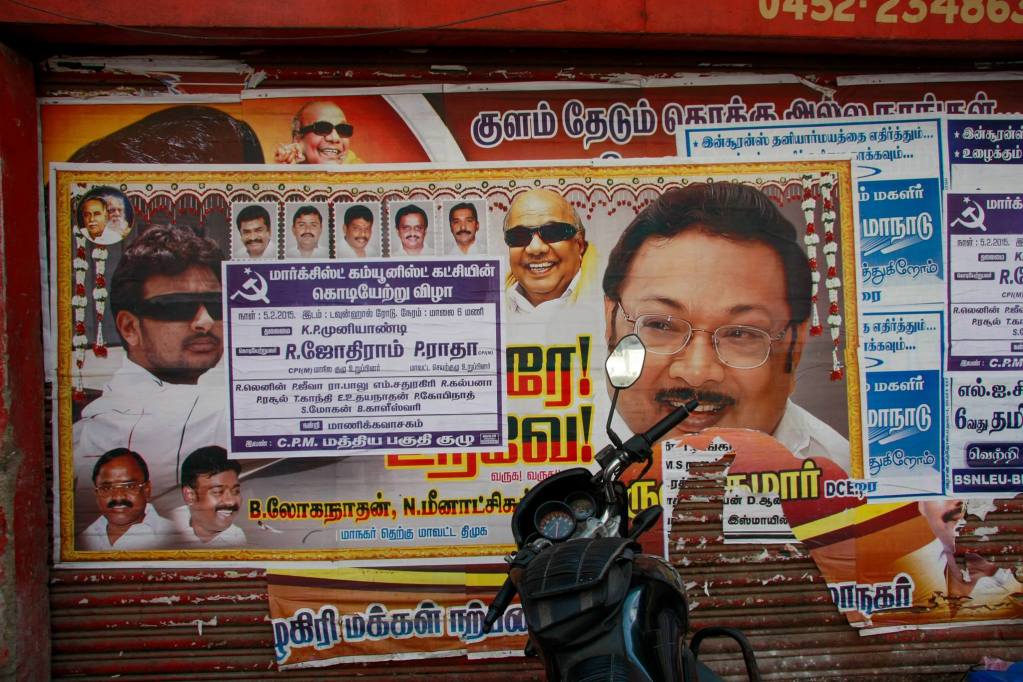 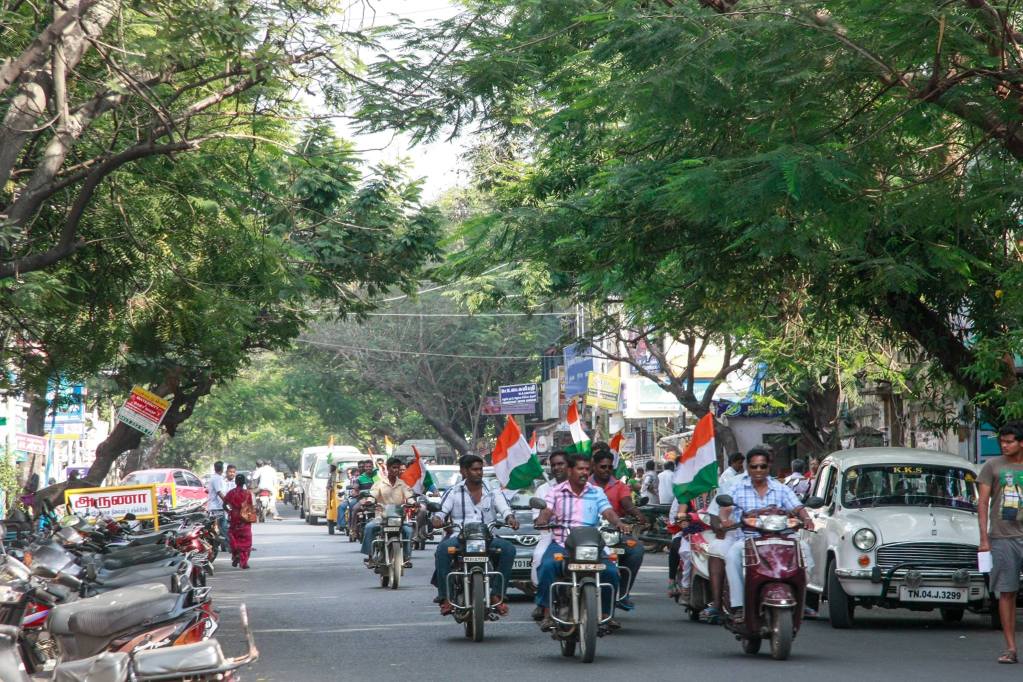 Everywhere we went, we would run into a political rally. You’d know even if you don’t see it — it’s the trumpets, the drums, the crowds, the flags… and the reason why we were always stuck in traffic mere seconds after leaving a bus station heading to another town.

Madurai’s Meenakshi Amman Temple was probably the most fun of the whole lot… and that’s even before getting to the story behind it. 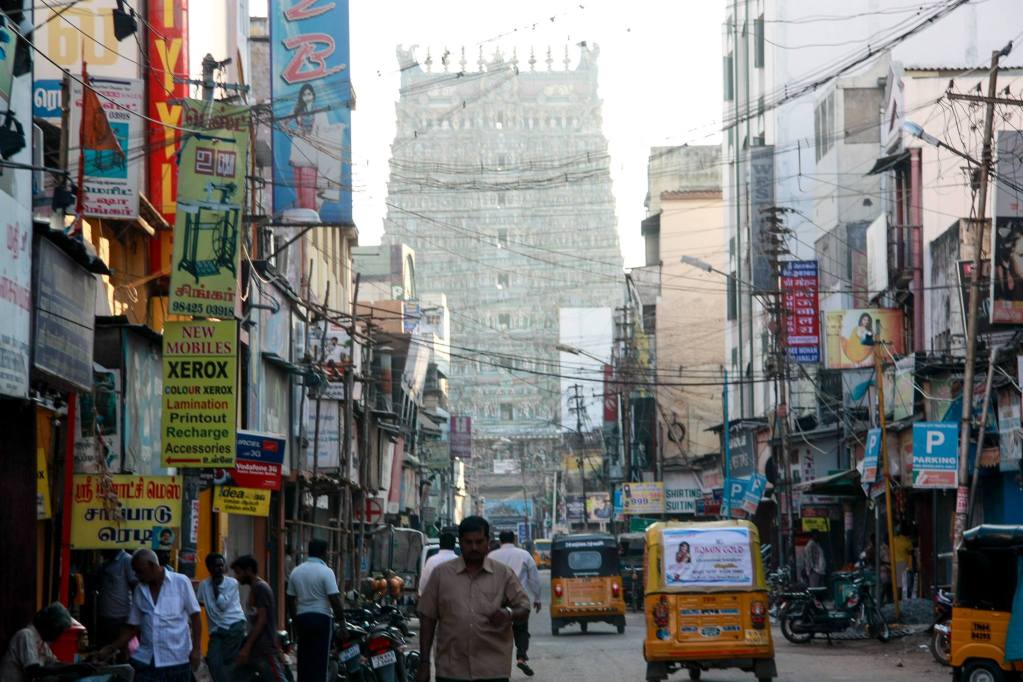 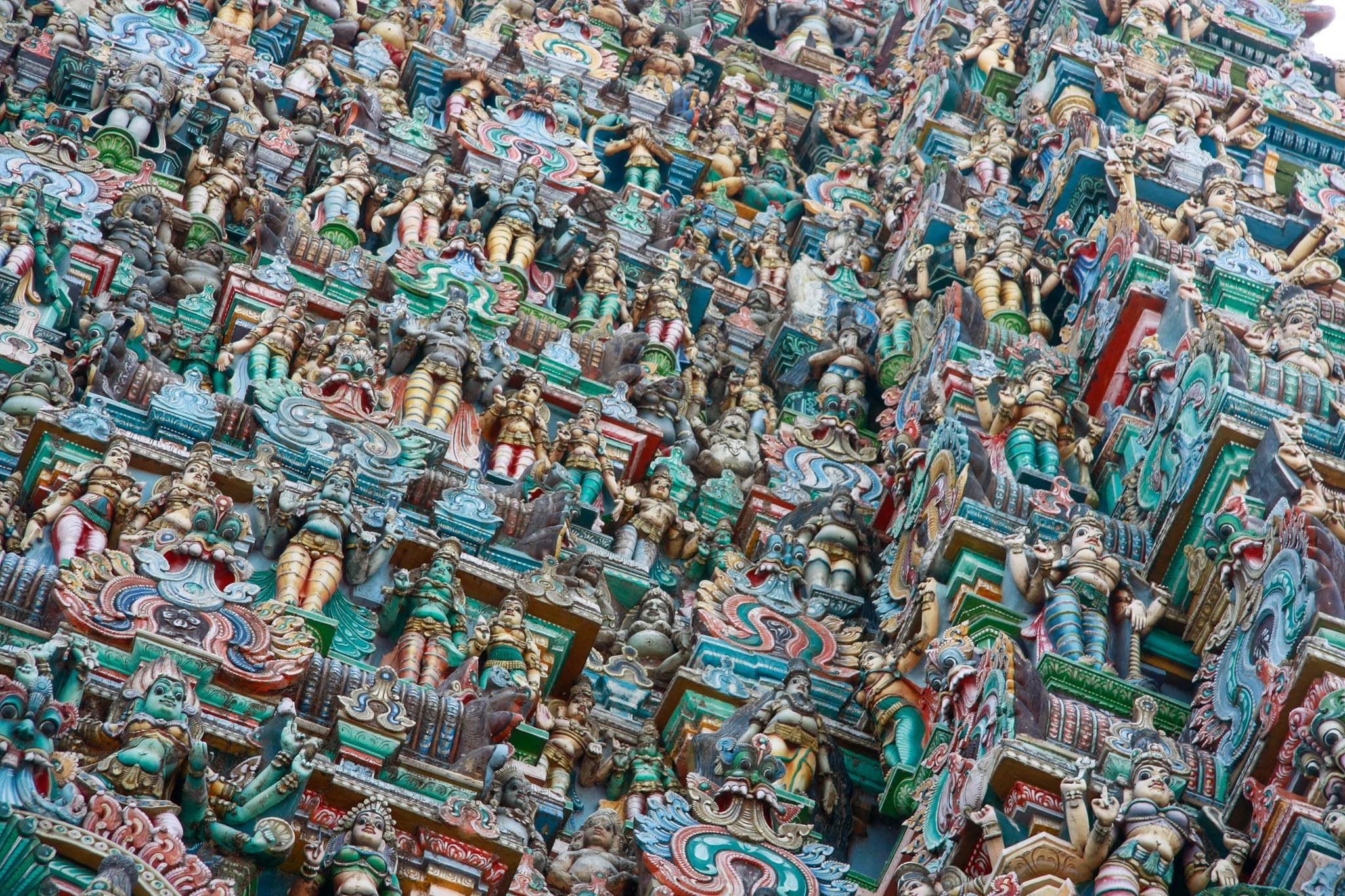 Surrounded by the largest gopurams I’ve ever seen, some roughly 50m high, we were immediately launched into its colourful halls with tall carved pillars, market-like stalls, endless chanting played over the loudspeaker, golden statues, and endless maze of corridors. There’s even a temple elephant! Wanting to pass it a small bill as I saw the locals doing (the elephant just scoops it up with its trunk and passes the money to the handler), I was instead directed by the handler to turn around. Suddenly, thwack! Elephant trunk resting on my head. Felt funny. Awesome. 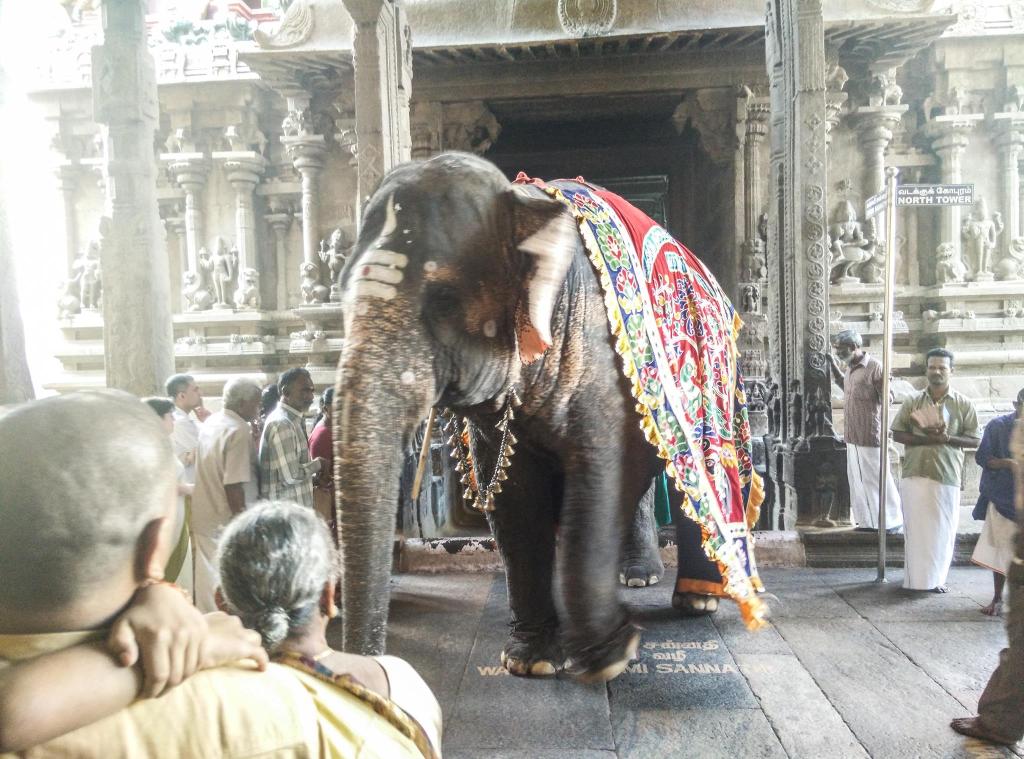 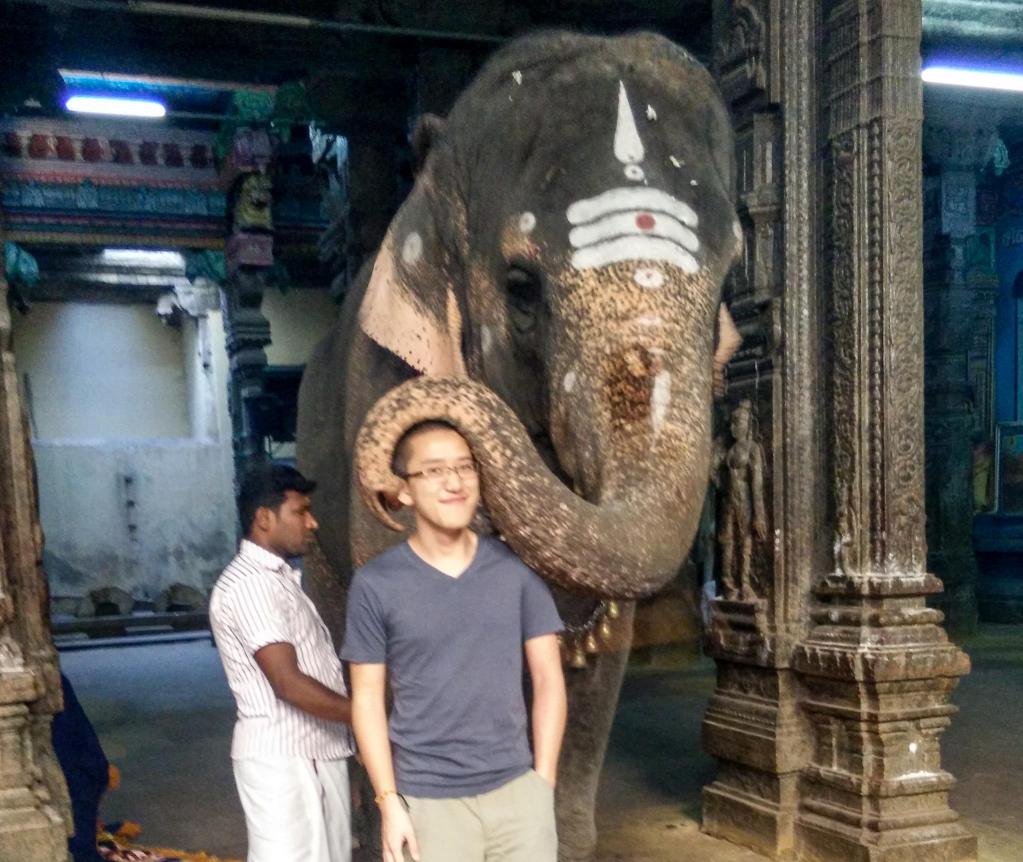 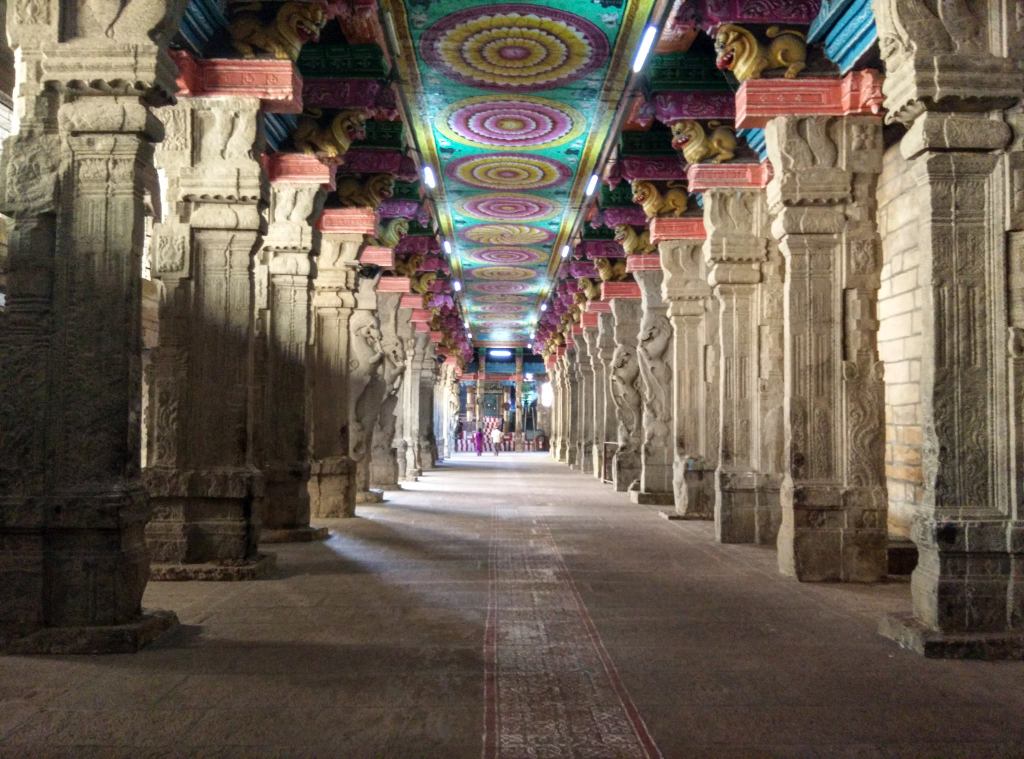 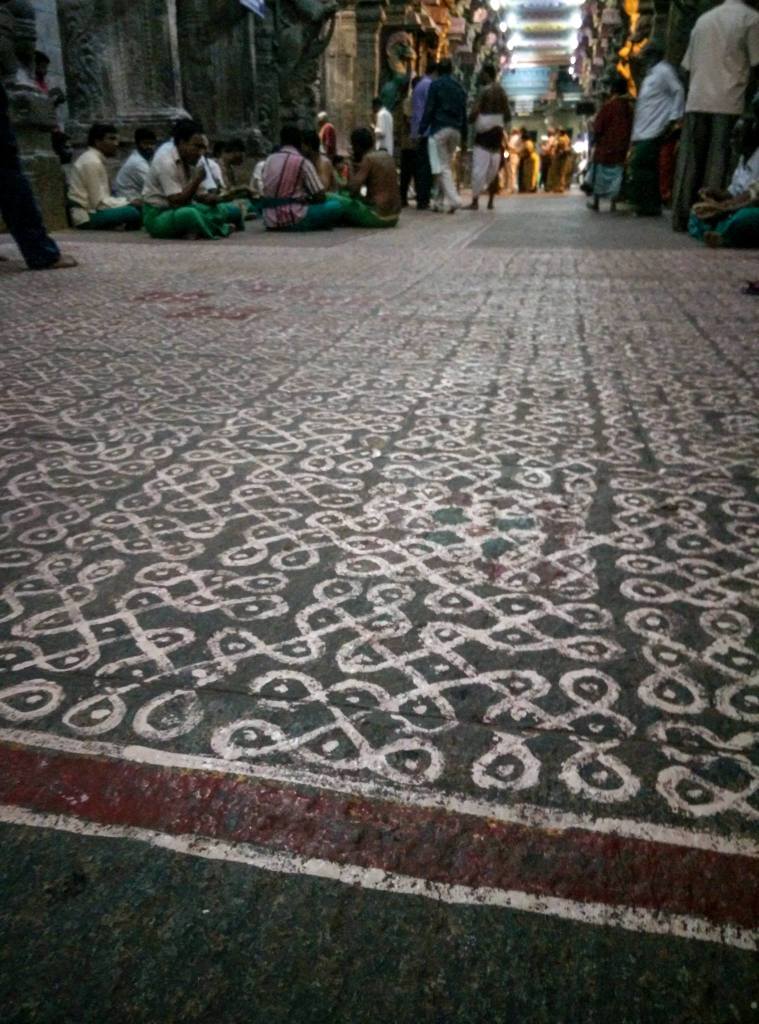 So what’s this temple about? Well, the story goes, Meenakshi was a goddess born with three breasts. Obviously distraught, her parents (royalty) were told from the heavens that the middle breast would melt away as soon as she met her future husband (Shiva). And so it did and the story goes from there. But anyway! Hidden in plain sight in the temple are several depictions of a three-breasted Meenakshi. Having only a general direction from my guidebook to look around the southeast part of the sprawling temple complex, Therese and I finally traced it down to a smaller entrance way near the ceiling. Indeed! 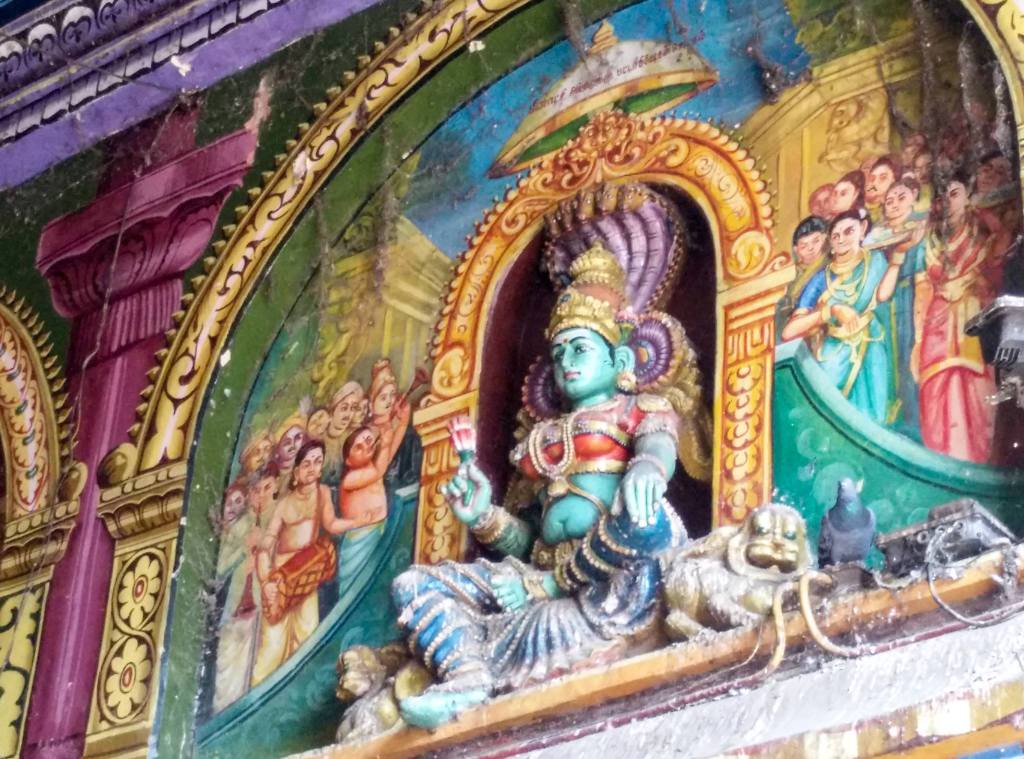 Well, that was fun, but again, I do wish I didn’t go in so blindly in terms of knowledge. Ah well. Therese and I parted ways at this point. Though I did miss her company, for me, enough temples, enough cities, time for some fresh air!