At the wedding, Therese and I were given many tips on places to see in Tamil Nadu, none so thorough as by Mr. Chandrasekaran, Deepika’s father. He graciously took time on a Monday to show us all the way to Mamallapuram.

Having no time in the past two days to sightsee in Chennai, Uncle took us on a morning blitz past Chennai’s whopping 2.2 km beach, an area torn between the ramshackle fishing village, the government-sanctioned gentrification in the form of new buildings and development, and the endless public area, full of stalls and even mini Ferris wheels that would open in the evening. It’s a shame we couldn’t see it in its livelier state, but a glimpse would have to do.

We made a quick visit also to the San Thome Cathedral, home to some relics of the apostle Thomas (most famous for being doubtful). He had moved his ministry all the way to Mylapore, now a busy neighbourhood in Chennai, before being killed by a stray arrow. It’s admittedly a little jarring to see such a European style cathedral in India, but the faith does have large roots here, especially due to colonial times. Plus, unbeknownst to me, there are plenty more where that came from. 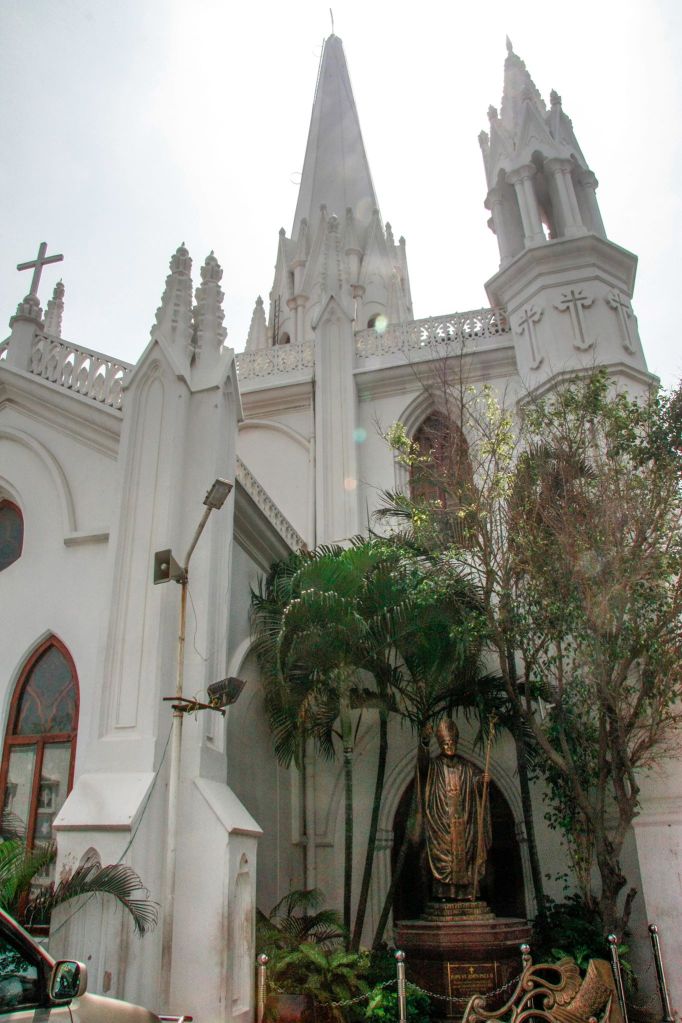 We carried onto Mamallapuram, passing through the coastal highway and by coastline destroyed just over 10 years ago in the 2004 tsunami. Once barren and beachlike, the government has now planted trees to take root and provide stability for the land.

Mamallapuram itself had plenty to see, but we only had a few hours. Known for its 7th-8th century era temples, we first took a wander through the Five Rathas – five smallish but ornate buildings (and a life-sized elephant) belieing the fact that they were all cut from one giant boulder, with no seams. Though somewhat unfinished and quite weather-worn, some of the rathas had inlaid carvings and pillars in their interiors. Each are dedicated to a Hindu deity. 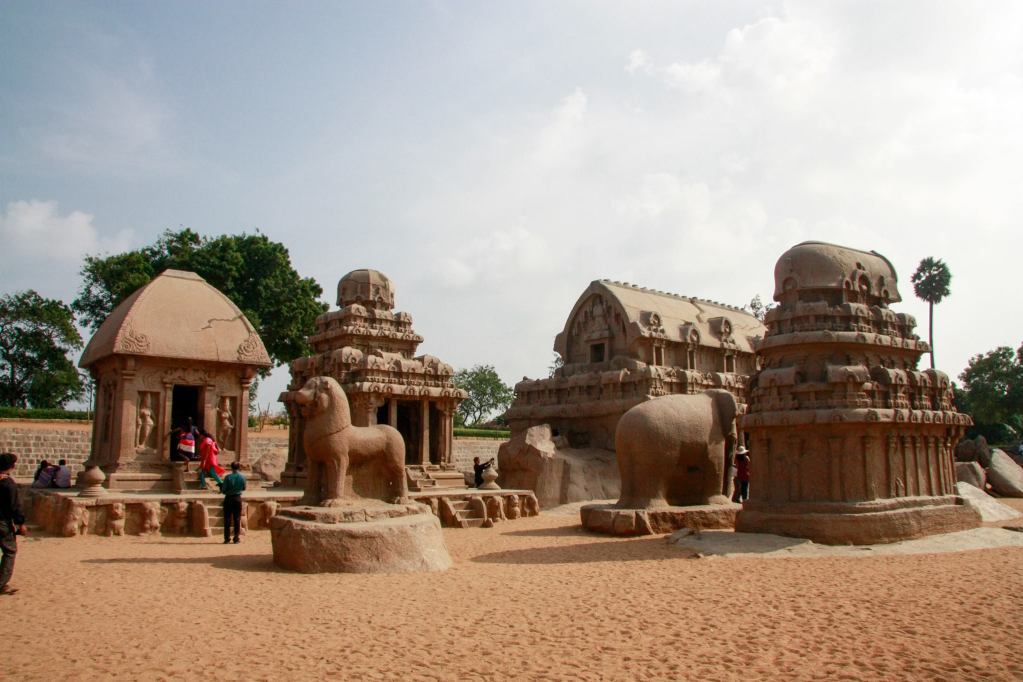 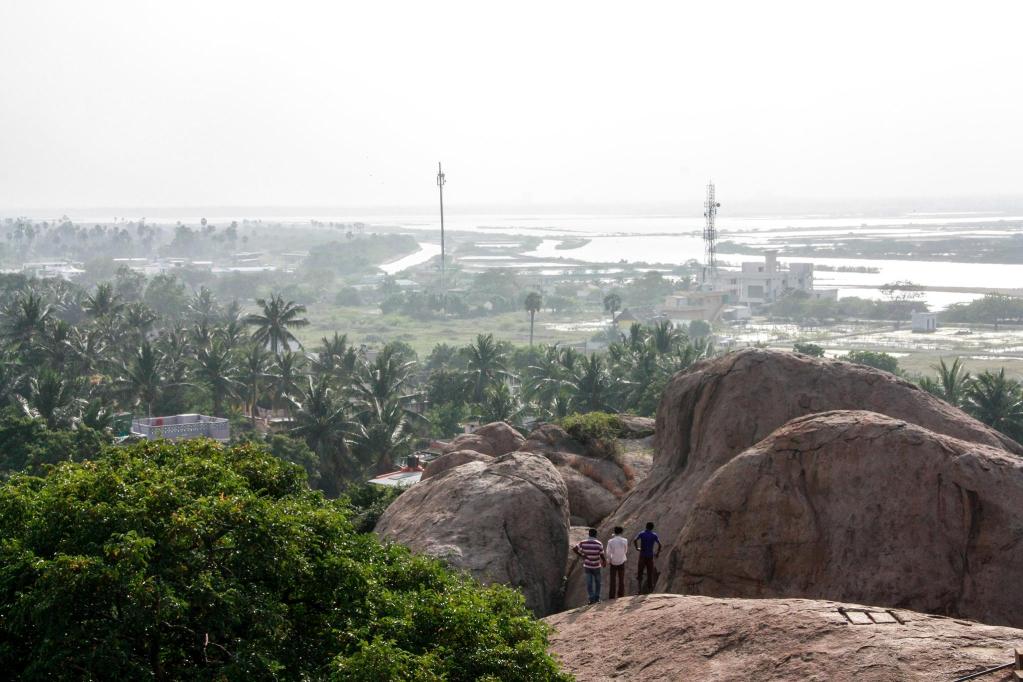 Far more rock-cut temples are strewn as far as the eye can see from Mamallapuram Hill, as well as Arjuna’s Penance, a giant relief carving on the side of a hill depicting Hindu legends. We finished off with the sea-eroded Shore Temple before Uncle saw us off, putting us on a bus to Pondicherry and a hotel room there that his wife had kindly arranged. 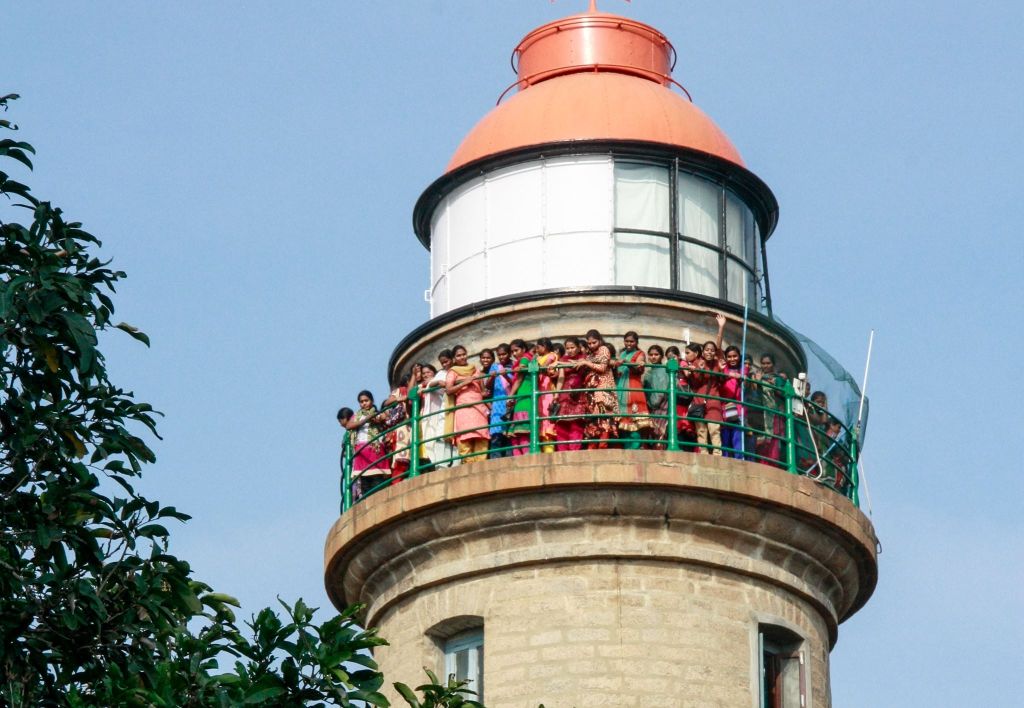 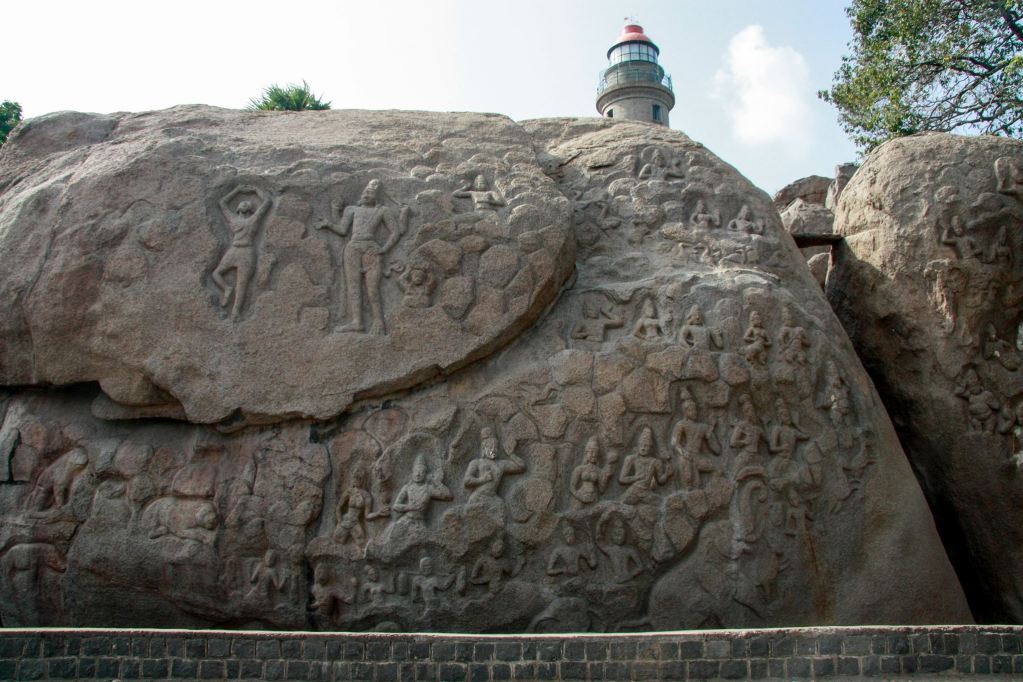 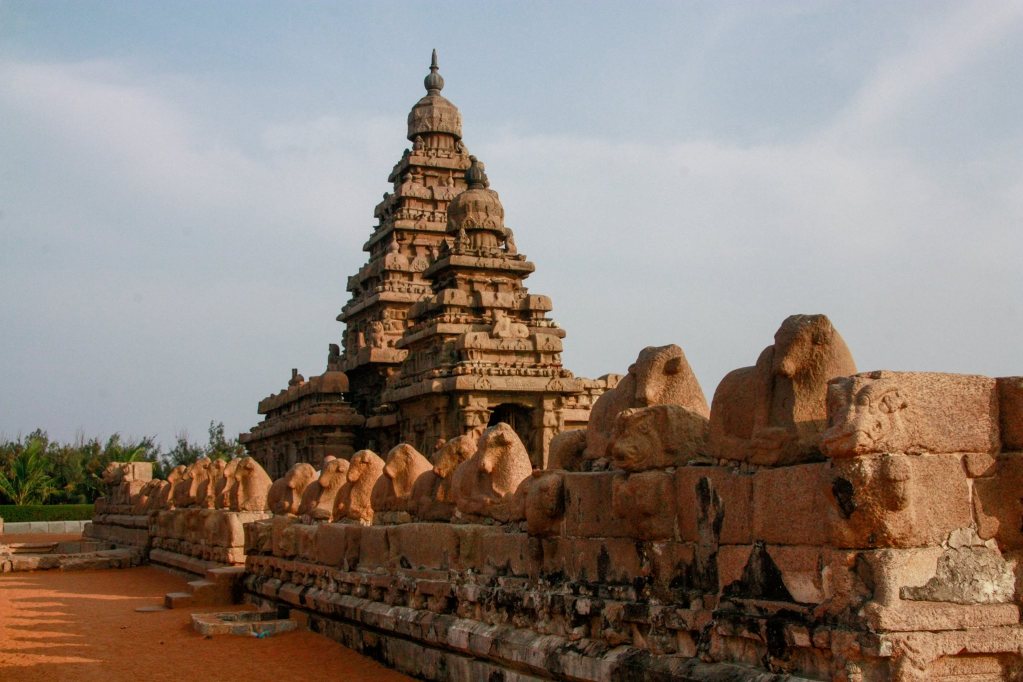 In a little quiet, tree-lined enclave surrounded by the typical hectic trappings of an Indian city lies the French Quarter of Pondicherry (officially Puducherry, but still commonly referred to as the former). Therese and I spent the evening and the following morning walking the lovely pedestrian-only promenade street, with the Indian Ocean on one side and faded but colourful French colonial era buildings on the other. Plenty of tourists (primarily French, no surprise there), but plenty of locals walking and jogging too — where else can you do that in a big city in India, with no fear of crazy traffic? 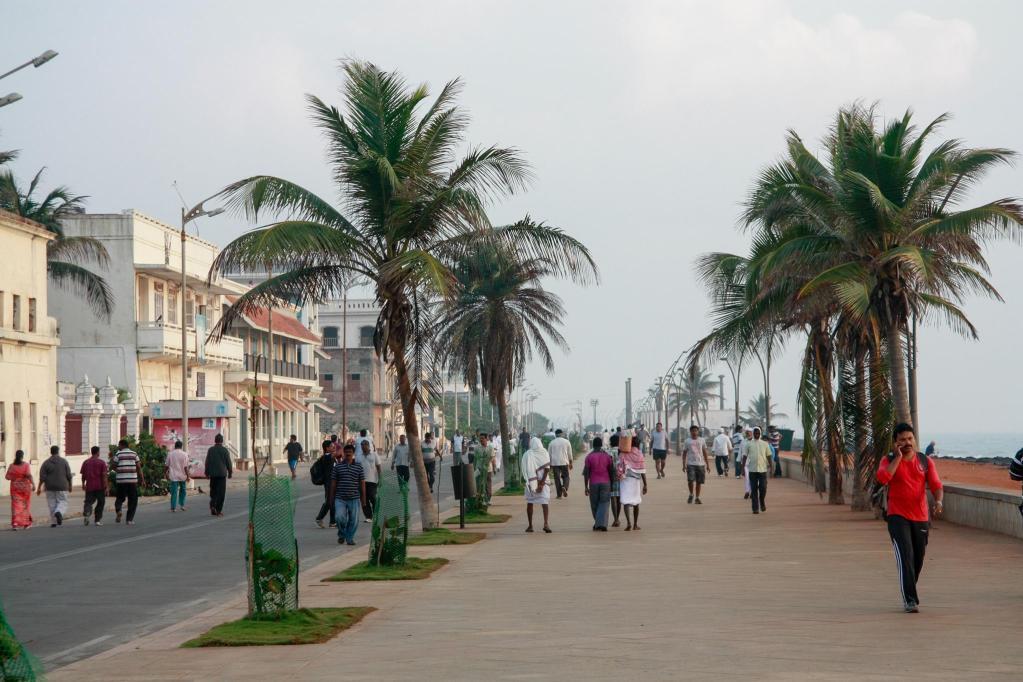 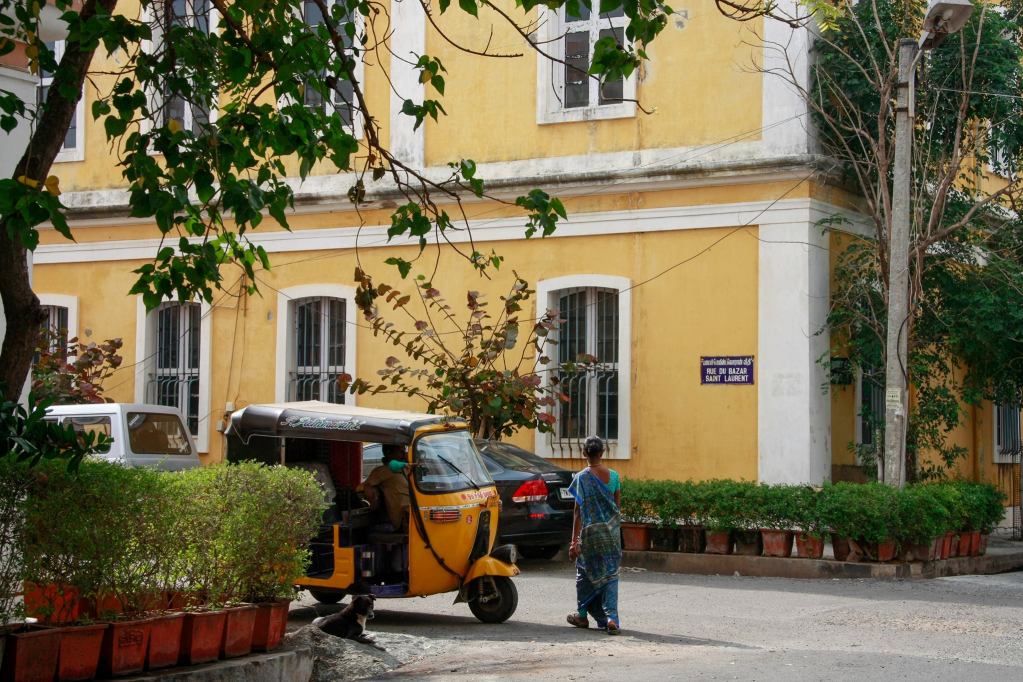 While definitely not France, there’s a certain charm to it all. There’s a ton of hippie stuff too, yes, like ashrams and art and products from nearby Auroville (basically an idealist hippie enclave consisting mostly of “enlightened” foreigners), but the vestiges of French culture have sort of blended into the South Indian locale, with French cathedrals (complete with a local cardinal) in beautiful pastel colours, French food, French street names, and a nice green park. Everything has a South Indian twist — the church interiors with colours and blinking light-adorned shrines more akin to a Hindu temple, crepes stuffed with odd ingredients, an Alliance Française with a photo exhibit on Indian soldiers in WWI… We even noticed some locals in a restaurant speaking fluent, unaccented French to each other. 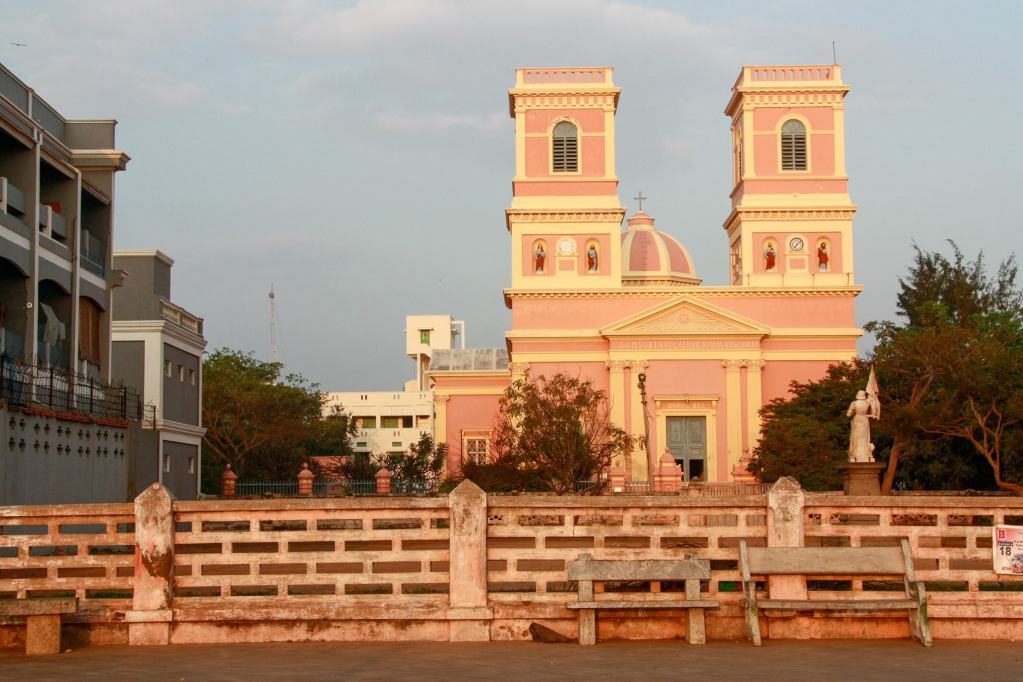 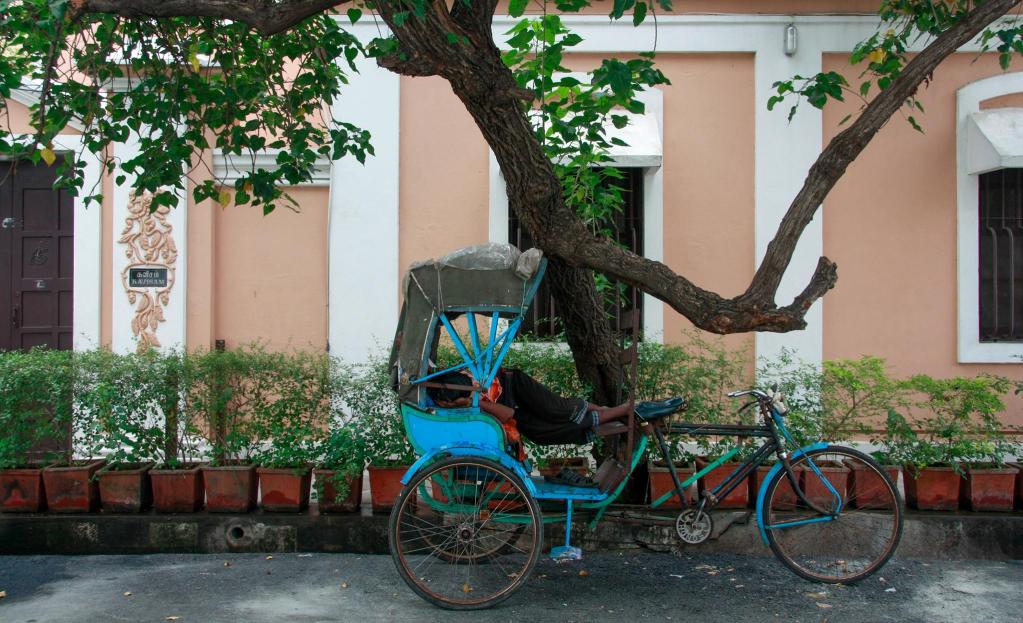 That park though. Locals playing badminton, exercising, and… a whole gang of men in the centre practicing laughing therapy, first timidly, then increasingly gregariously? India. 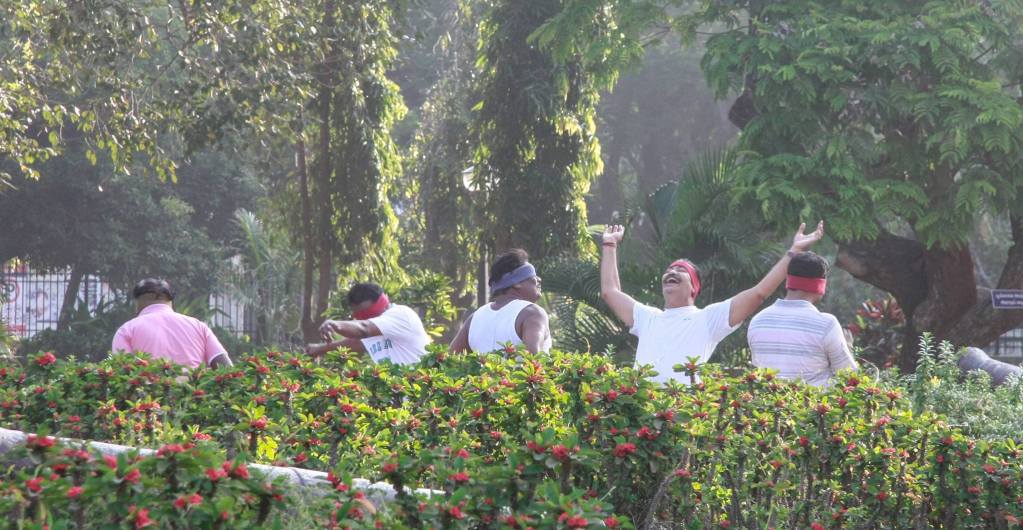