Getting out of the airport felt… familiar. Back on India time, two hour luggage wait and all. Back to haggling for a ride. Back to the chaotic traffic and honking and lane-ignoring auto-rickshaws and nearly being run over every time I cross the street. A lot may be different down south, but it’s still India, and it feels good to be back after four years.

I’m here this time for my NUS friend Dhiviya, who’s getting married. She’s connected me with a few of her other friends living in Singapore who are also here for the wedding, Jayasri and Deepika, who are more than happy to explain everything that’s going on, and Therese, a non-Indian who has never been to an Indian wedding. Now this’ll be fun.

With nary any time to rest after arriving from an overnight flight, it was time to grab some biriyani, get a sim card, try on (and exchange) our outfits that Dhiviya’s mom generously bought for us, then head to the first wedding event!

As is tradition in an arranged marriage, the first event is where the bride and groom meet for the first time. Well, so people these days aren’t so traditional — parents will introduce their son or daughter to the other, they hang out and see if they’re right for each other, then decide to get married. Sooo Dhiviya’s actually known Sujan for a good seven months now, but well, let’s play along here. In front of a small crowd of closer friends and relatives, the groom and bride each take turns receiving blessings from those friends and family, in the form of a sprinkling of some sort of fragrant liquid (holy water?), a little smear of some yellow substance (turmeric?) on their cheeks, a little red dot smeared on their forehead, and maybe some gifts. Yeah, so I’m not making this sound terribly nice, but it’s pretty cool. Since said friends and family go up one by one to repeat this process over and over again, the rest of us get to pig out on food in the back. Mmmmm. The bride and groom, after receiving their blessings, then take the stage together and “meet”. Nice. But they still don’t get to eat like the rest of us, at least not until everyone’s left. That’s maybe four hours? 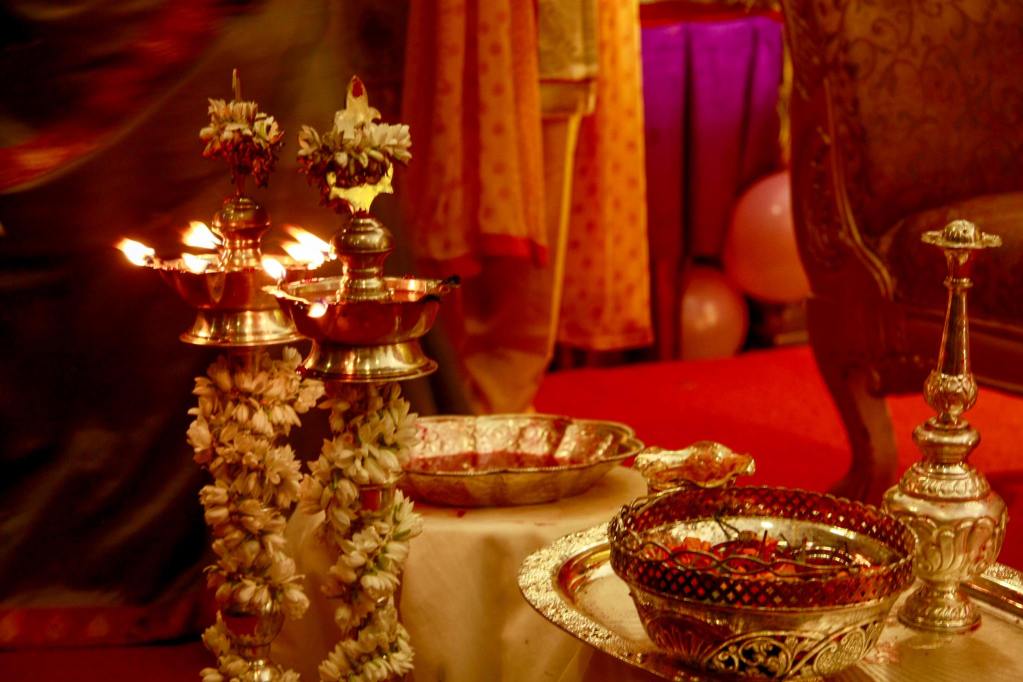 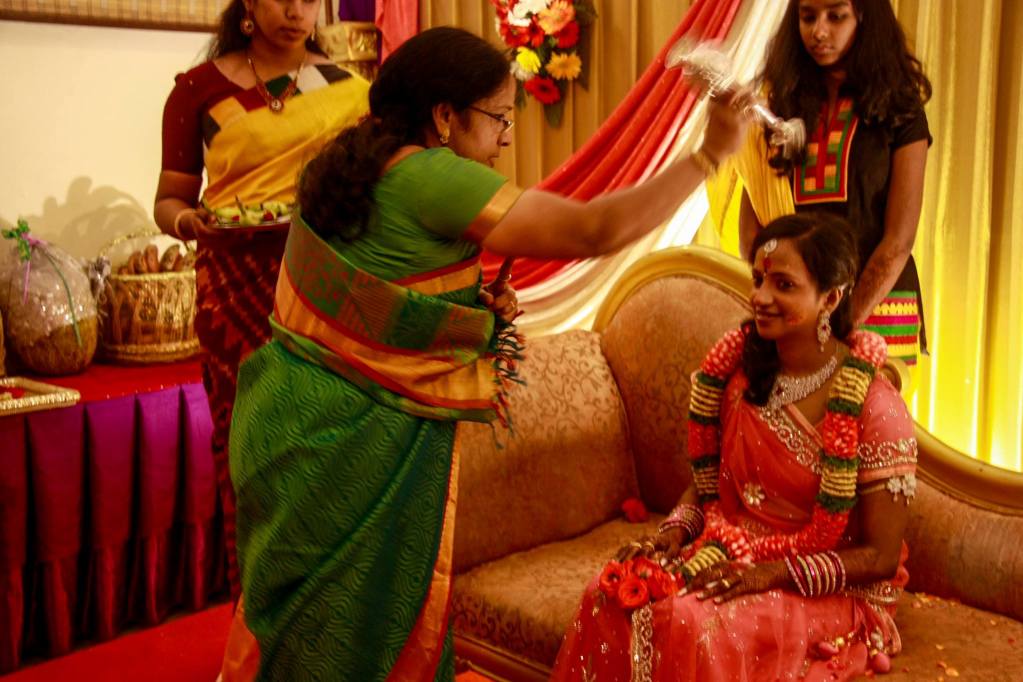 The next day… The actual wedding! We arrive at 8 am aaaand breakfast buffet. Bride and groom don’t get to eat. We, on the other hand, sit in rows, each with our own banana leaf with several chutneys spoon on top, and caterers walking up and down the rows adding idli, ootapam, rice, and other starches or fried delights upon request to pick apart with our right hands, scoop up some chutney, and devour. Ah, the good life. 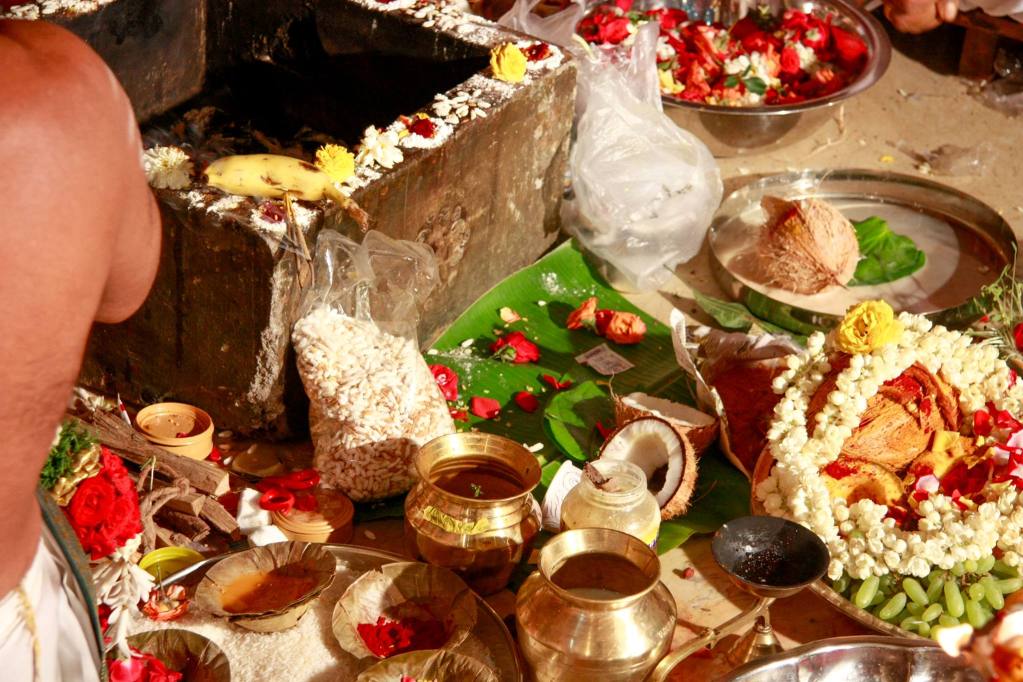 We return to the marriage hall and find two Hindu priests sitting under what I can only describe as an elaborately decorated four pillar gazebo, covered in colourful fresh flower garlands, and surrounded by some depictions of Ganesh? I think the pictures will have to speak for it. This wedding is also swarmed with photographers, cameramen, a drone that keeps blowing things away and distracting people, and is also being shown on two big screens in the hall and is being webcast for friends and family abroad. Sweet. To my surprise, we’re beckoned to watch from the stage… And at this point there are so many people up there that the only way the audience below can see what’s going on is from the video screens. 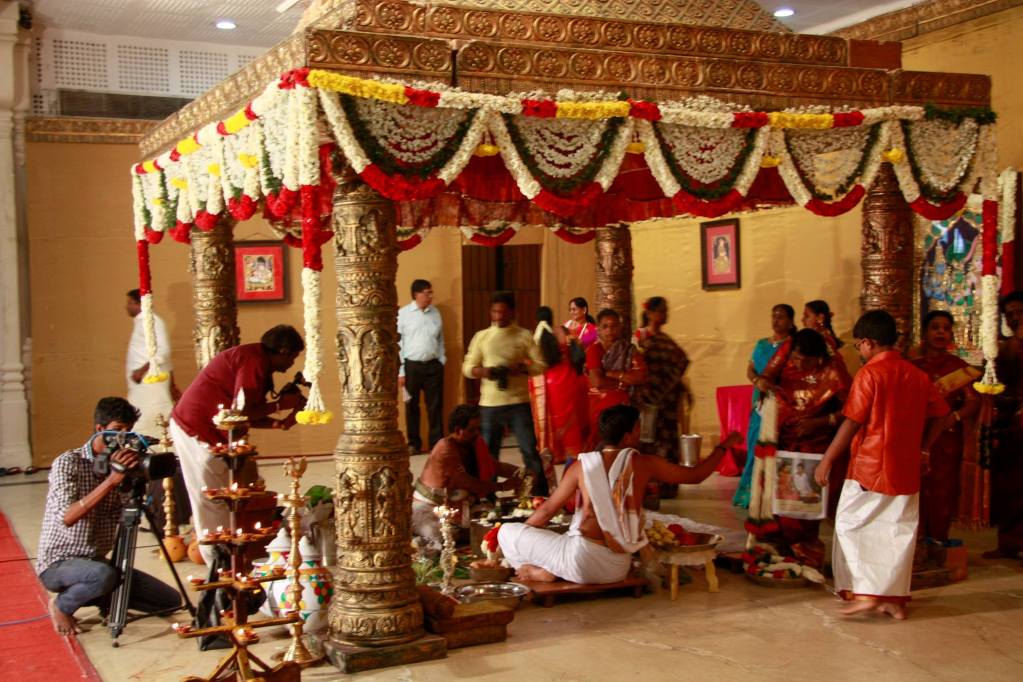 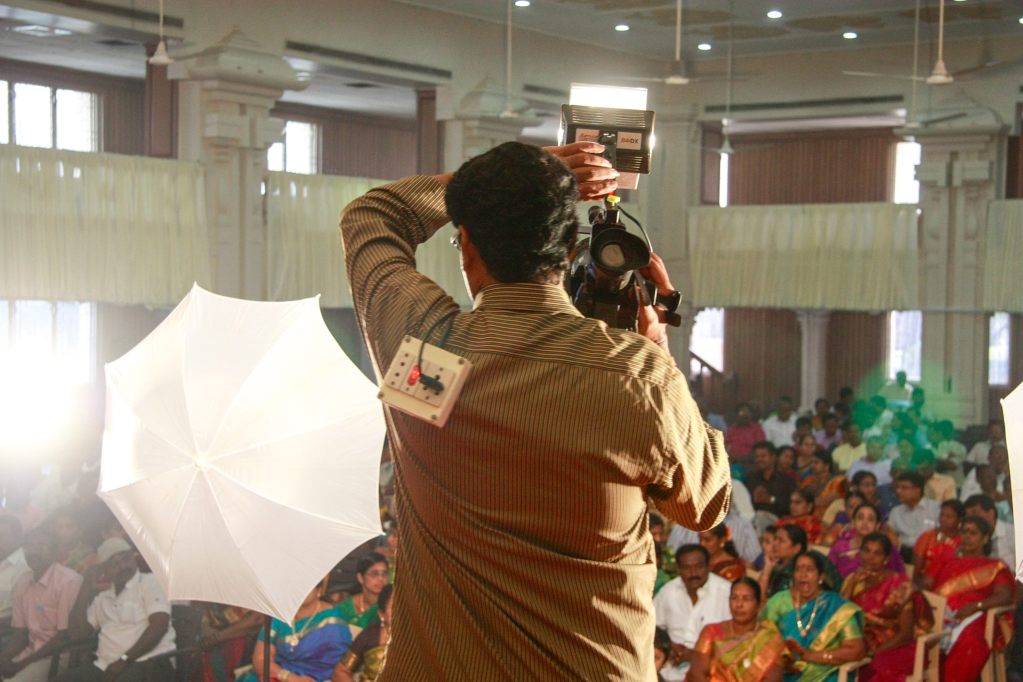 Sujan comes out first, receiving countless blessings from the priests, before something something aaaaand we’re all following him outside in a procession. We all approach a shrine, where someone provides a little offering, he gets some toe rings on, and then Dhiviya’s brother comes out. And then in WTF mode, suddenly, Sujan tries multiple times to run away and refuse marriage, with Dhiviya’s brother trying to pull him back and convincing him with gifts to stay. I’m told this is all part of the typical wedding plotline… This is awesome. 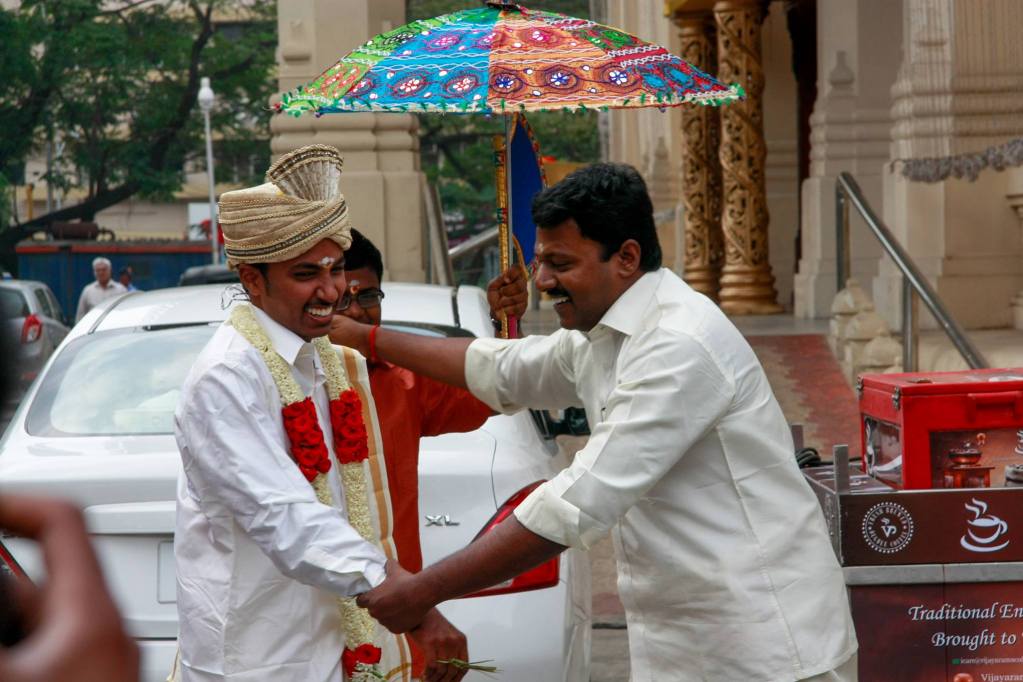 We all return to the wedding hall, and Dhiviya finally comes out and takes her place next to Sujan under the gazebo, looking gorgeous and probably suffering under the weight of all the gold chains (and a single rupee note!) tied to her head and the multiple flower garlands pretty much swallowing her whole. The priest offers the couple some holy water to drink — hahaha, Dhiviya totally made a quick face upon tasting it — and rice to throw into the fire pit in the center. And then they’re off! Seven circles around the gazebo… 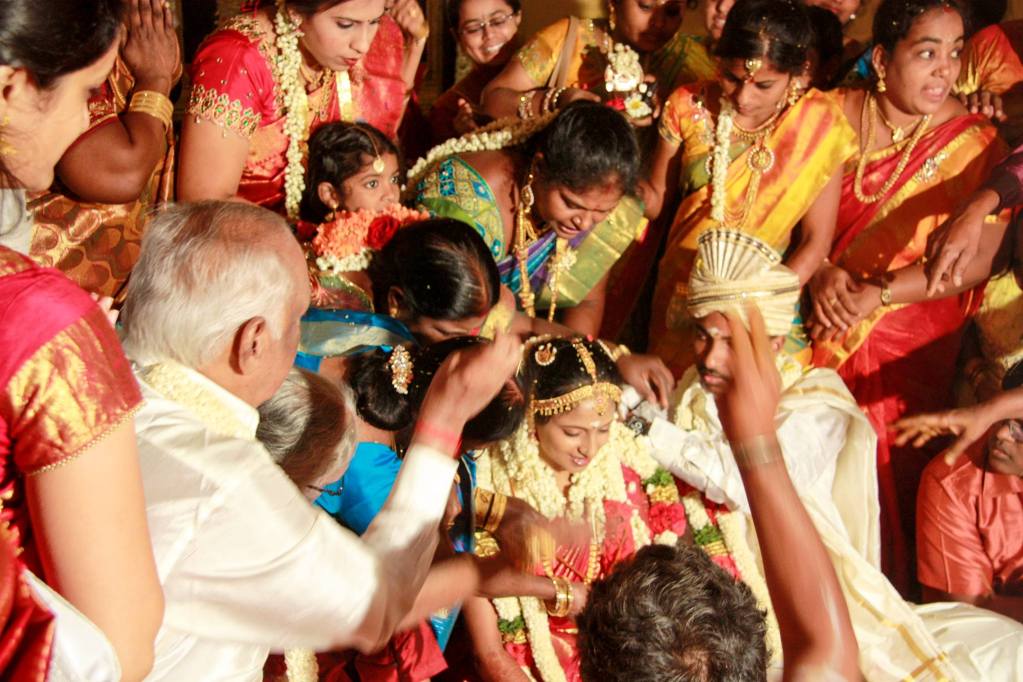 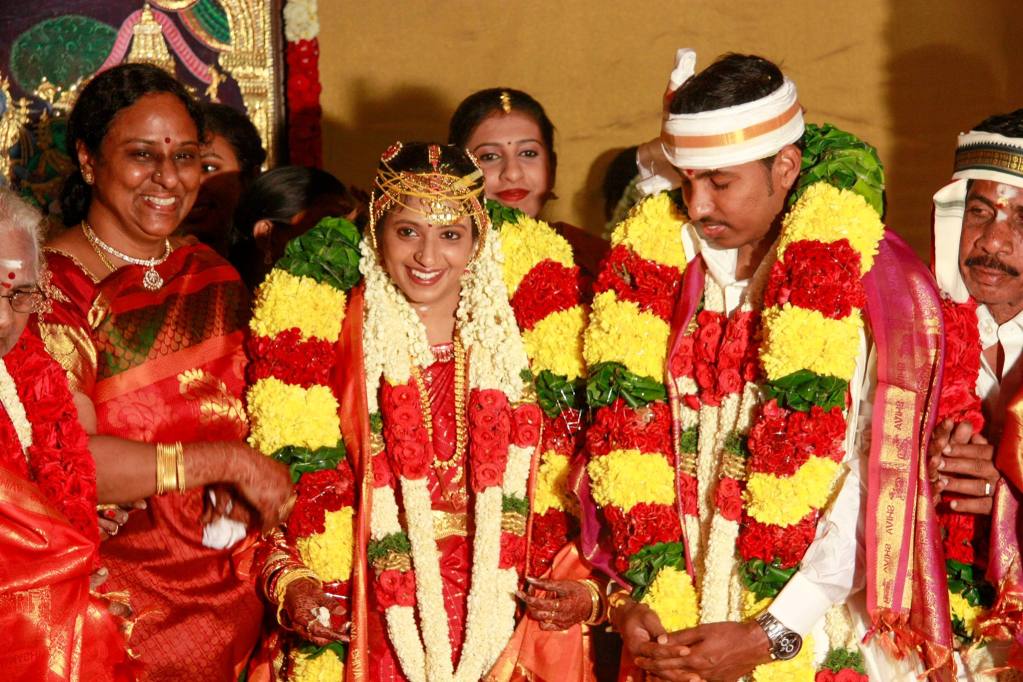 Which turns out to be a several hours long process! After each circle, more garlands, more gold, more gifts, more photos, more shiny clothes, more blessings to either to or by the couple to elders… Once in awhile, everyone on stage throws rice at the couple; I think I hit Dhiviya in the face. Oops! There’s so much going on, loud drums in the background, fragrant things burning, crowd on the stage, colours everywhere, rituals being done — with no wedding rehearsal, Deepika tells me, no one really knows what it all means but they just follow the lead of the priests anyway. But this is when the rest of us get to drift in and out to have lunch. Still no food, poor Dhiviya! 😛 When we leave the hall, the couple are still at the front of the stage taking pictures.

We return five hours later for the reception to an even larger crowd full of friends and acquaintances, and check in on Dhiviya in the dressing room, getting her makeup done. So, how does it feel to be married? Doesn’t feel like it yet? I certainly can’t blame her, with all the pomp and circumstance going on and minimal time with Sujan.

For the reception, the stage has been transformed, just a “throne” for the couple and a ton of hanging garlands and beautiful lighting. They stand for pictures, as a line easily several hundred deep forms to the left of the stage, waiting for their turn. This is the scene when we get dinner… and when we’re done. (This, after navigating two whole floors of food! The wedding invitation itself even had the menu printed out on practically a page.) We take our turn, and after saying goodbye, we’re too exhausted to wait for the inevitable dance party. I can’t imagine how Dhiviya and Sujan feel, but I’m elated to have been a witness to this. Shame I’ll have to miss the second reception in five days! 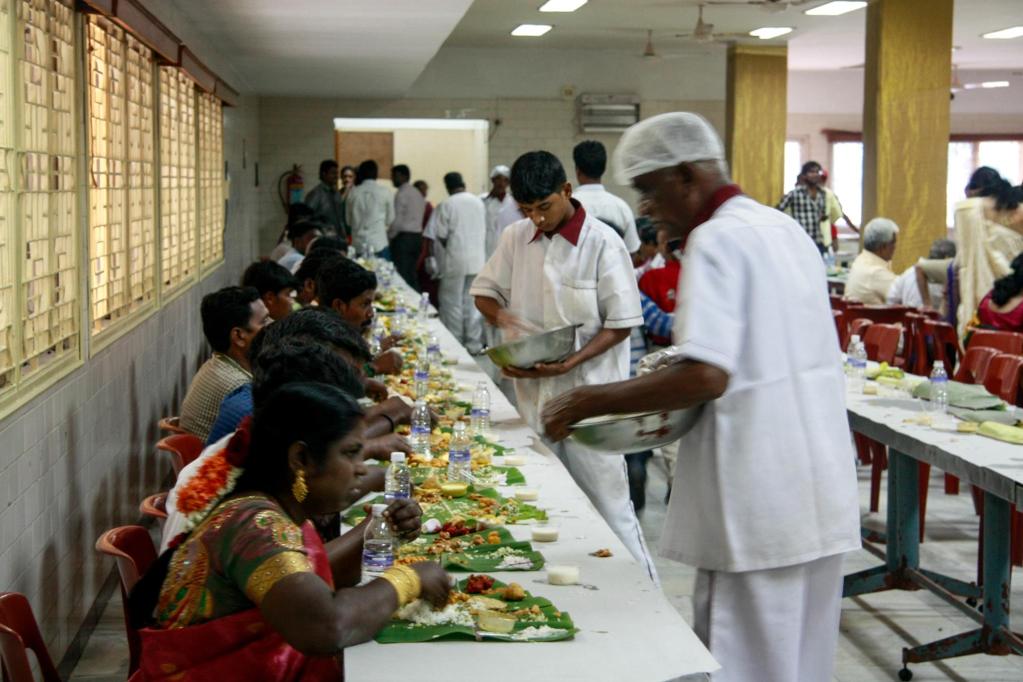 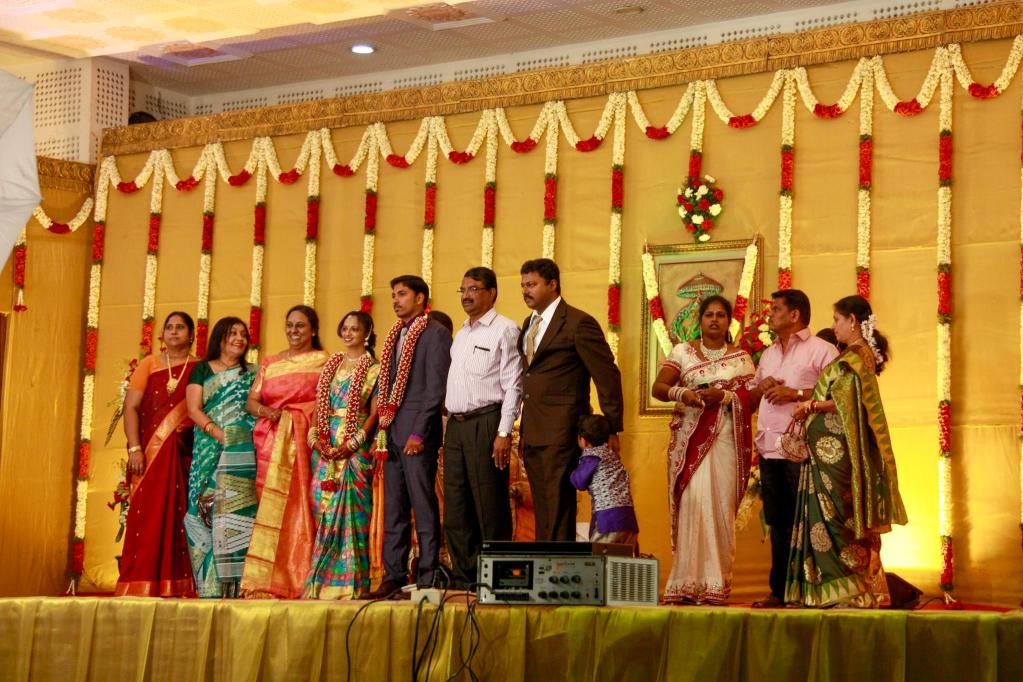 This being the first wedding of any sort I’ve ever attended, I certainly have some high expectations going forward!