Canada can easily be summed up as “vast”: giant spaces with people scattered across long distances. Having spent the majority of my life in Canada’s big cities, however, has masked this reality to me. On the other hand, renting a car and driving across Newfoundland has now redefined the meaning of what a “long drive” is: hundreds of kilometres where you’re lucky to even find a gas station or restaurant within an hour’s distance.

Five hours (including a ferry ride, and plenty of gas stops and Tim Hortons) from Change Islands is Rocky Harbour, the main settlement within Gros Morne National Park, Newfoundland’s natural jewel and a UNESCO World Heritage Site. It’s hard to describe in words the incredible scenery, but there’s no doubting why it’s a heritage site when scientists dub it the “Galapagos of geology”. There’s a dizzying array of landscapes all within the park, from the coast to bogs to former fjords to cliffs to lakes to mountains to even what looks like a desert! While the sun was being a bit coy during my stays in the park, the moment the sun hits the mountains and the Tablelands at a certain angle, the entire place just glows. 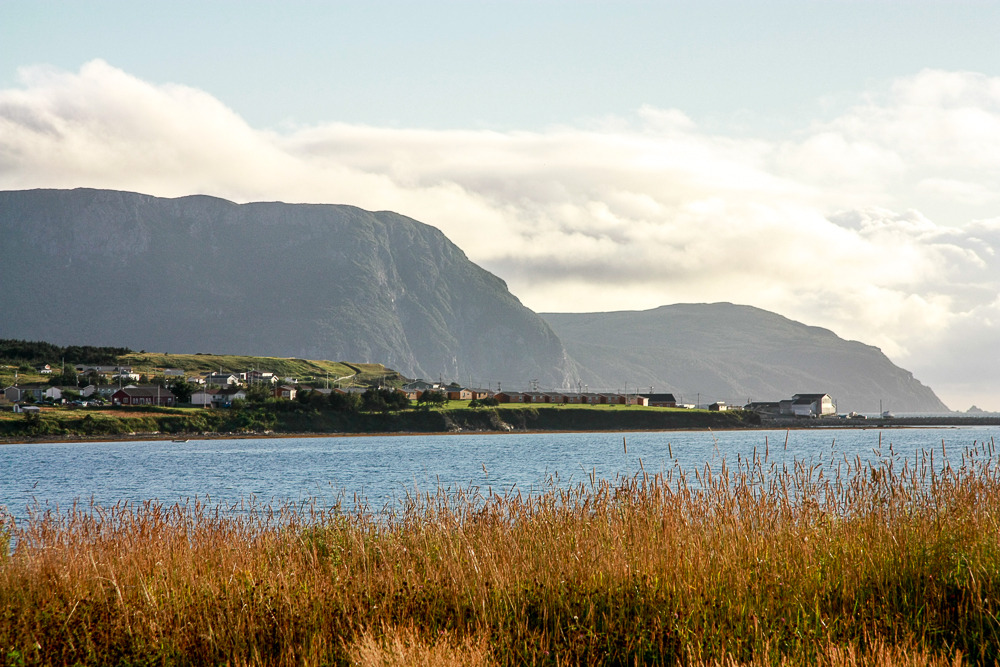 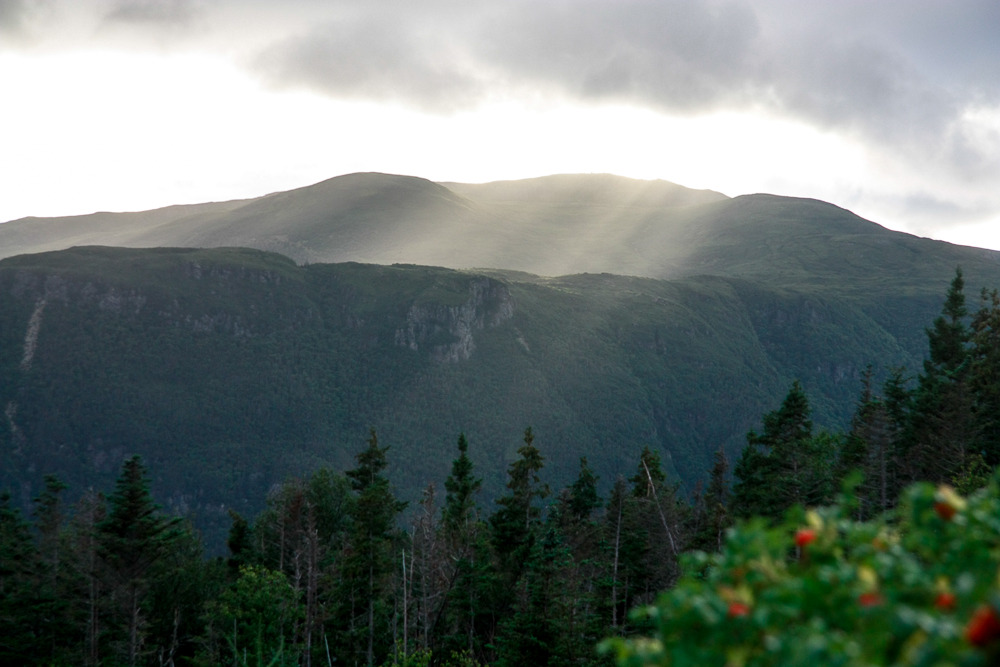 But yeah, about the weather — the peak of Gros Morne (the eponymous mountain being the tallest in the park and second-tallest in Newfoundland) was rarely visible under clouds that seemed to persist even on good days. I unfortunately didn’t get to see much of the famous Ten Mile Pond or a view from the peak after a 6 hour hike with occasional 30-second spurts of gaps between clouds, but the hike was both difficult and amazing, with views of some enormous cliffs and even a few moose. 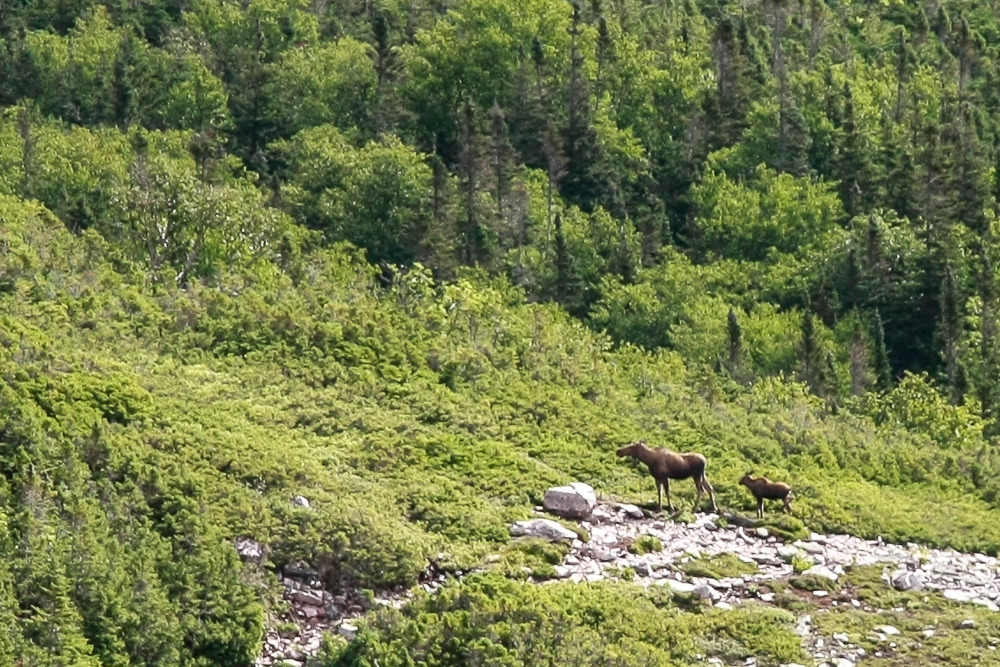 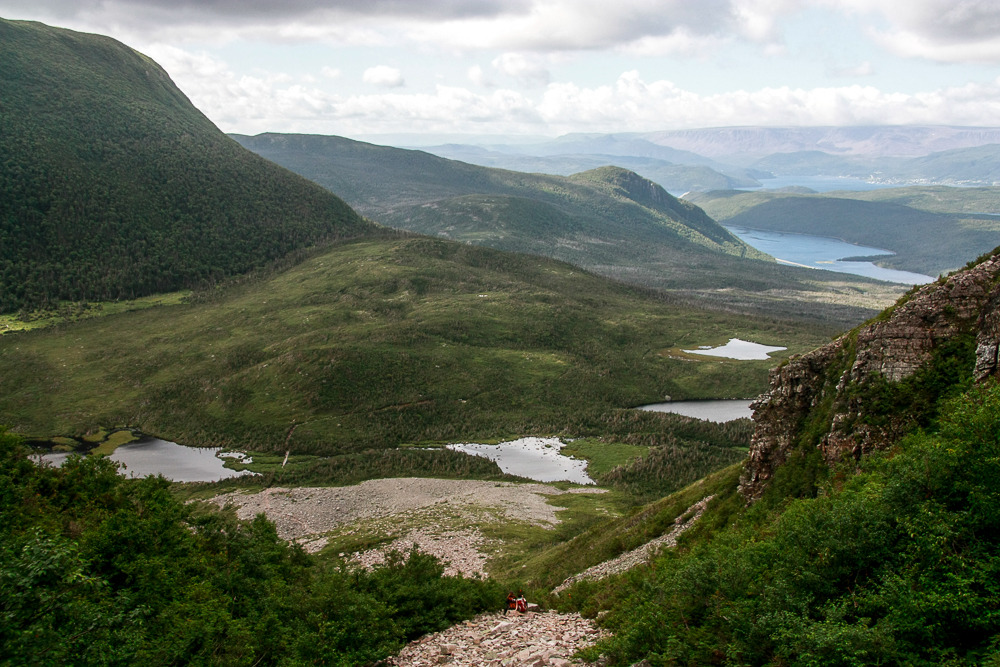 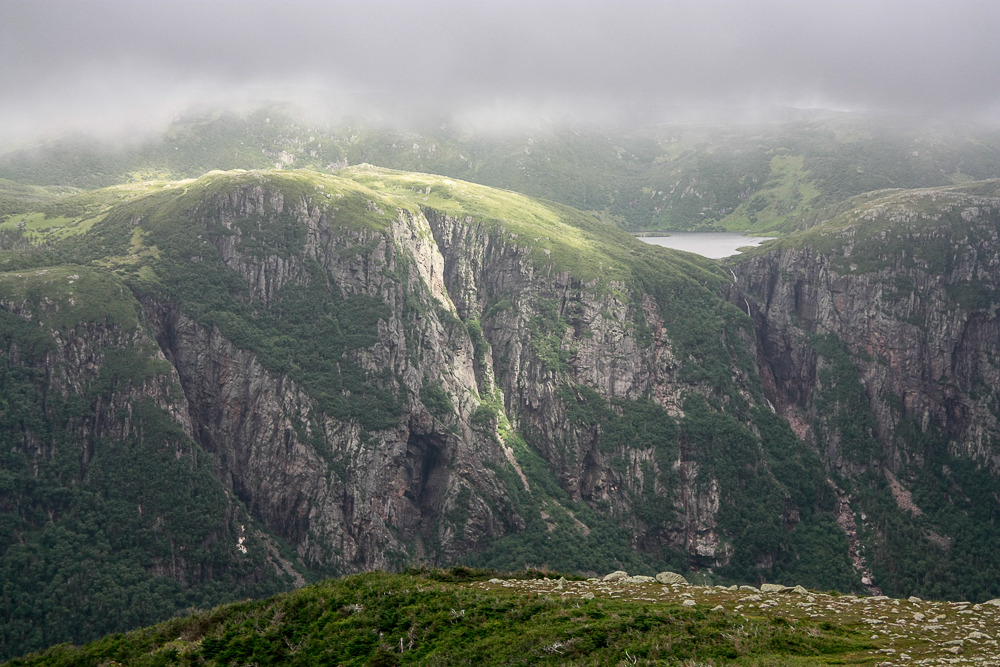 However, the weather did clear up a few days later for me during the glorious, must-do boat tour of Western Brook Pond. Formerly a fjord formed by glaciers and now a large freshwater “pond”, it’s simply amazing to be surrounded by staggeringly high rock walls that drop right into the water. No pictures or videos I took could properly capture the scale of it all, but I certainly did try… 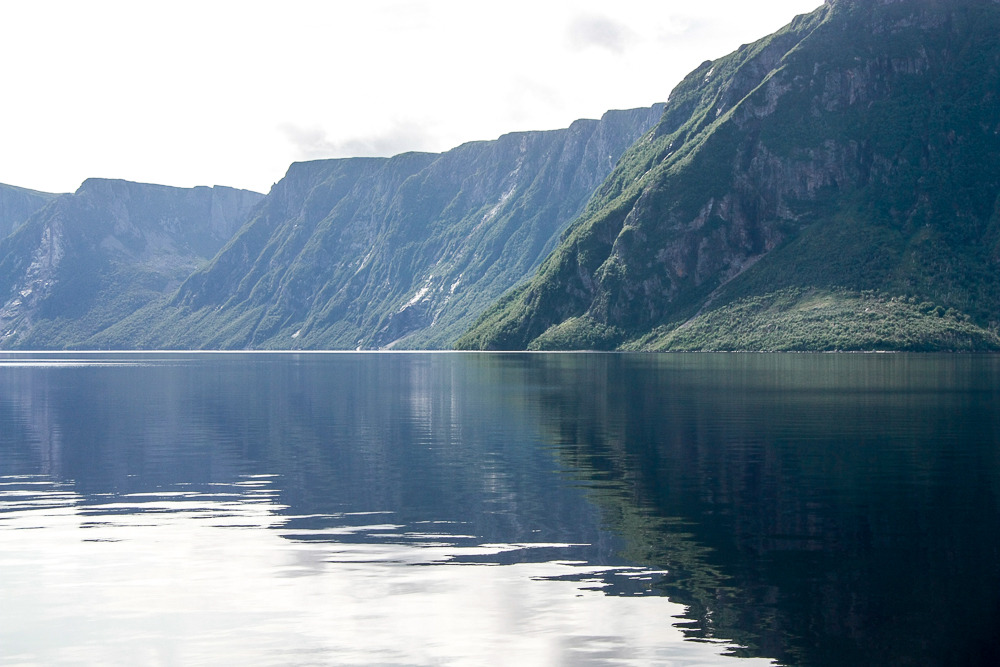 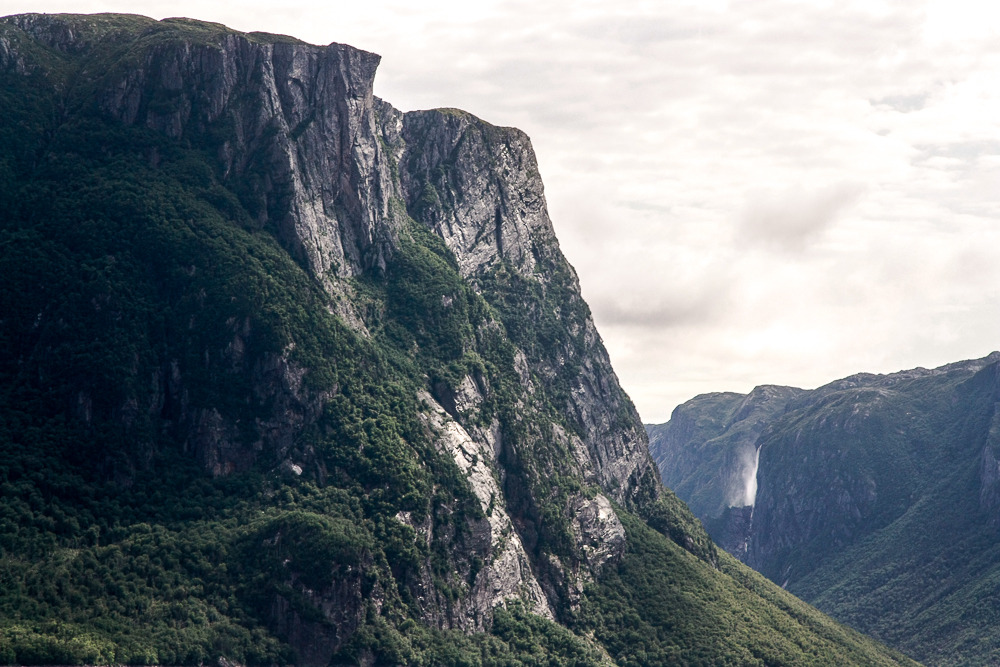 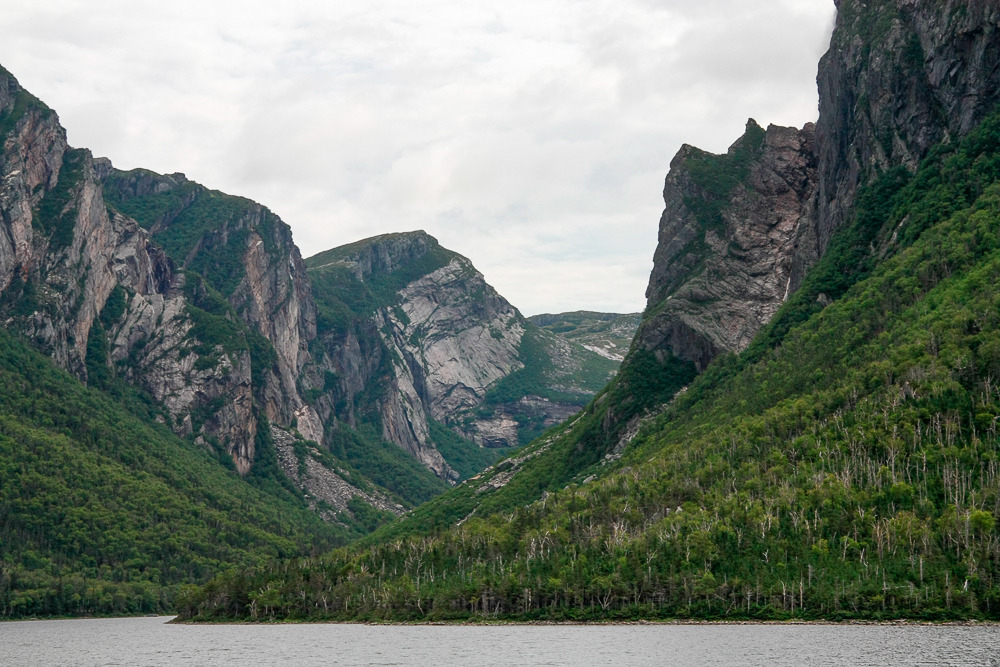 There’s also the aforementioned Tablelands, which I also caught in great weather conditions. Desert-like, flat mountains with little vegetation smack in the middle of some very forested peaks, the unique geology is one of the few places in the world where rocks from the Earth’s mantle were pushed up to the surface, and a prime example of plate tectonics. Under the afternoon sun, they shone golden brown, looking straight out of Mars. 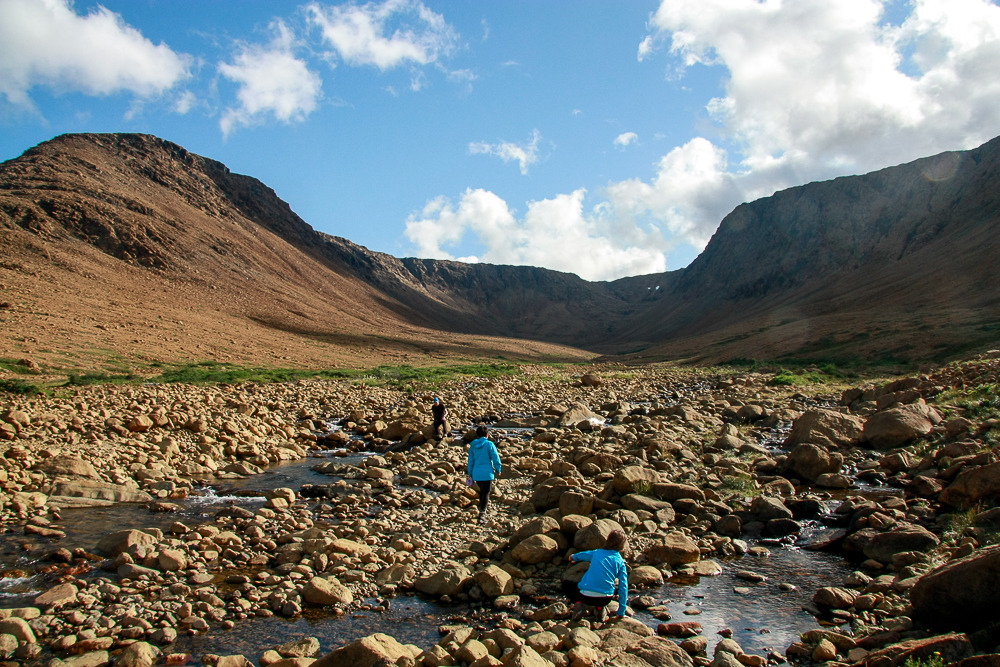 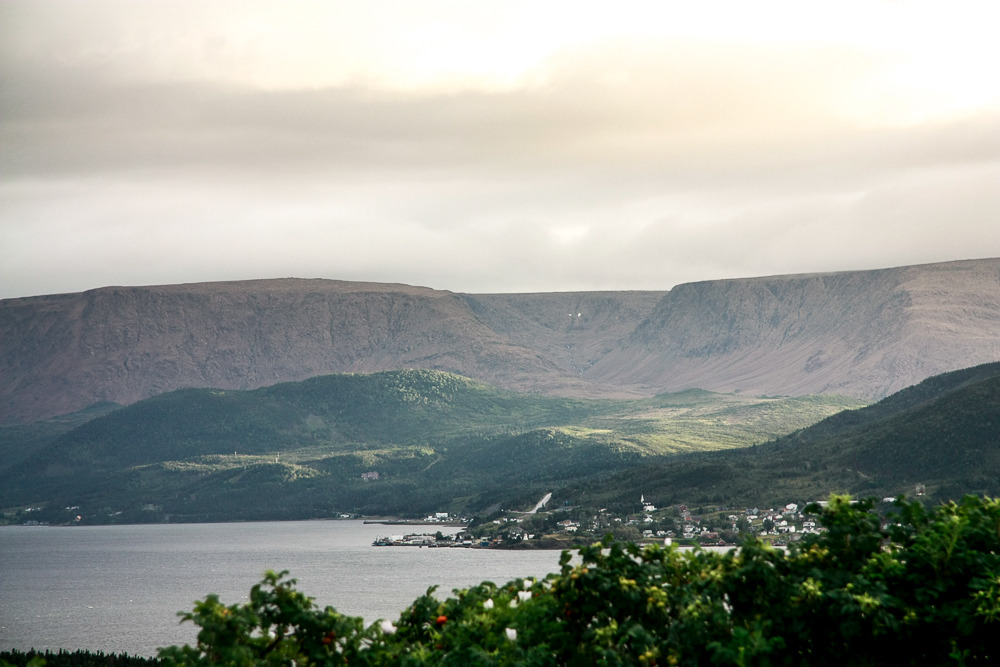 Two hours north of Rocky Harbour, right in the middle of the “finger” that is the Great Northern Peninsula, is Port au Choix, home to a national historic site and archaeological dig uncovering the remains of some Palaeoeskimo, Amerindian, and Dorset settlements. In other words, these are where people from Siberia and Greenland migrated to, and stayed for over 700 years. Why they left though… not sure! 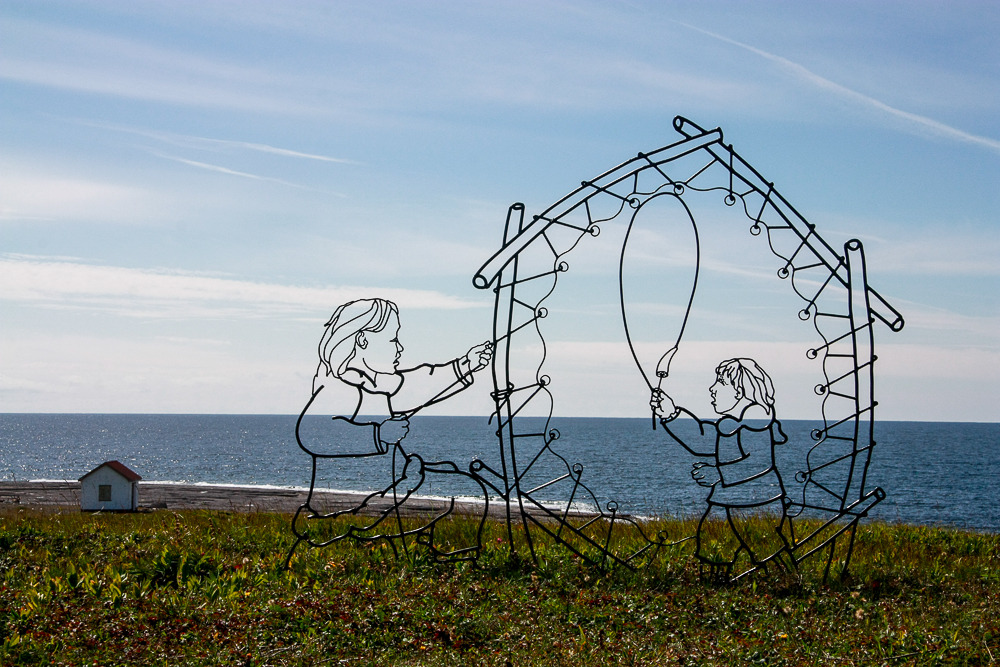 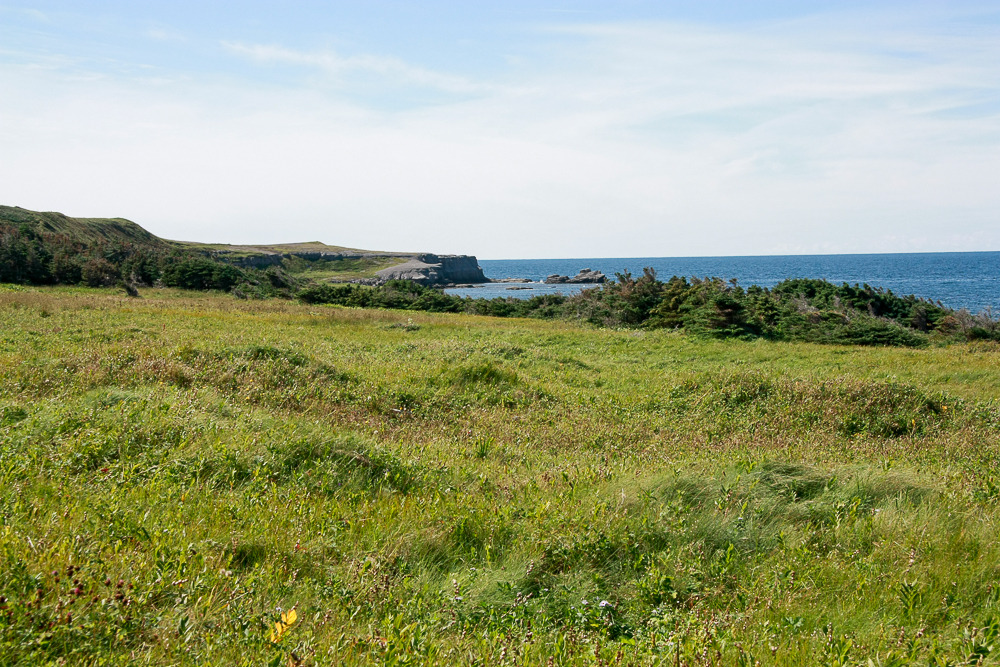 Another three hours north of Port au Choix, passing some wild caribou and views of Labrador just some 30 km to the west, is L’Anse aux Meadows at the very northern tip of the peninsula. This was the northernmost point of my trip, and the mostly barren, moss-covered landscapes and dramatic islands felt so remote and otherworldly — even though if you look on a map, it’s further south than Edmonton or even Saskatoon! 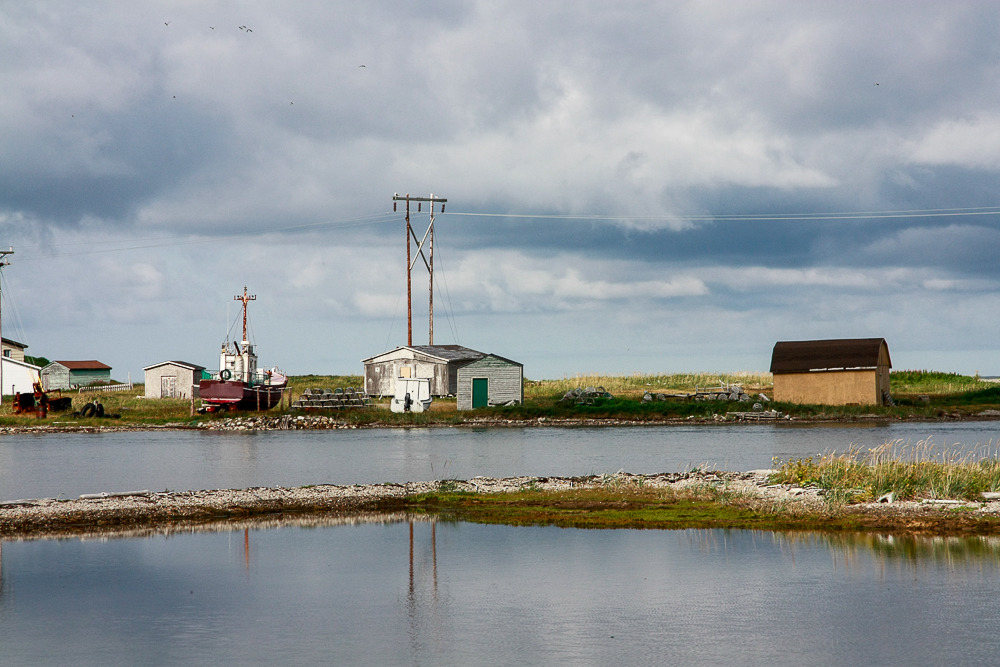 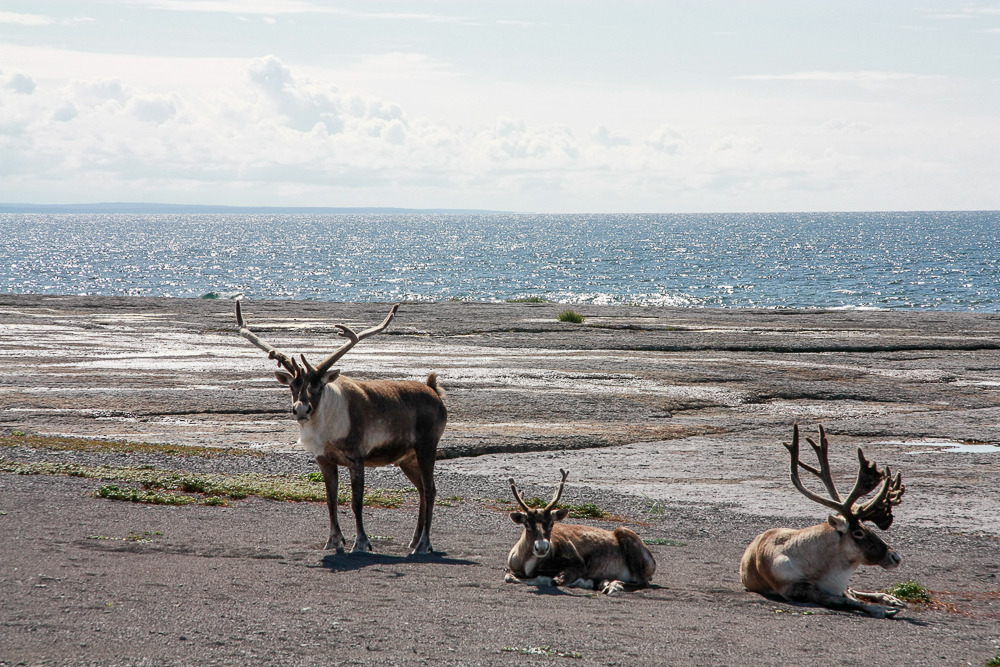 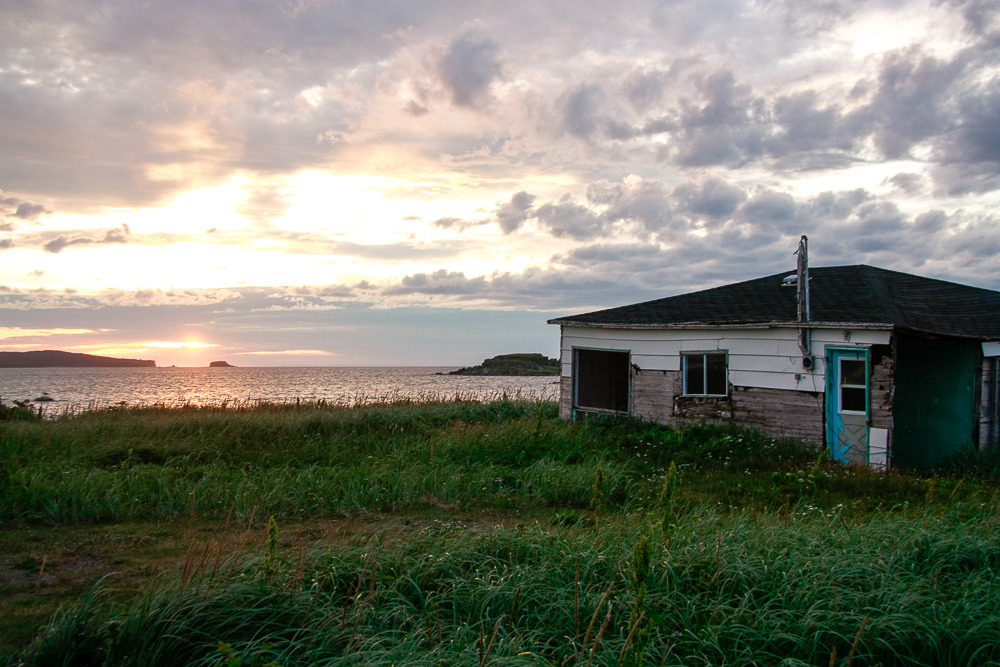 Small villages dot the area, and it’s clear from talking to locals that the area’s been declining significantly in population. Fishing for certain species has been reduced to quotas and maybe a couple days a year (or none if you’re unlucky with the weather on those certain days), and with no other significant industry around short of tourism, people move away, schools get put up for sale due to a shrinking student body, and then more young families move away. It’s quite sad, but the remaining folks seem to be a strong, resilient bunch. The road to the area didn’t even get built until a few decades ago, when residents who needed to travel out of their village (to the hospital, for example) needed to take a dogsled or boat for two days to the nearest town, and in harder times they’d just catch some seagulls and make stew.

L’Anse aux Meadows is a village of roughly 60 people, but it’s most famous for being adjacent to a national historic site and also one of the world’s inaugural UNESCO World Heritage Sites. In contrast to Port au Choix, L’Anse aux Meadows contains the remnants of a Norse (Viking, referring just to the male seafaring Norse) settlement founded by Leif Erikson dating to around the year 1000, as well as Dorset settlements dating much further back. World heritage indeed! Humans migrated from Africa to Europe and east through Asia to North America, but L’Anse aux Meadows shows the first attempt at full globalisation, where Europeans completed the circle and travelled west to North America, overlapping the land of those who migrated the other way. And this is nearly 500 years before Christopher Columbus or John Cabot! There’s also recountings in the Viking sagas — though not at L’Anse aux Meadows — that the Vikings did encounter aboriginal peoples at other locations in the Canadian Arctic and Labrador and conducted some trade, marking the first encounters of east and west migrators. 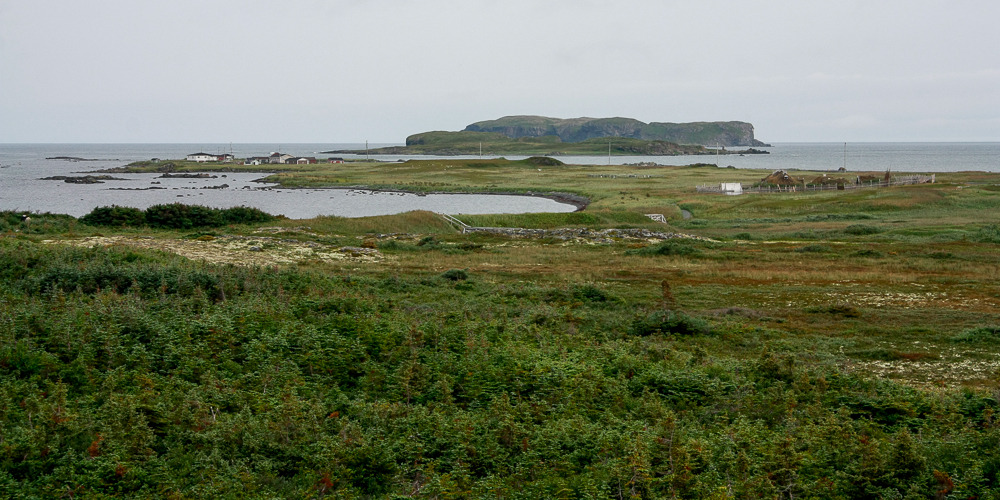 In addition to finding tools made from iron smelting techniques only the Vikings knew, as well as common household items like Norse spindles and pins, butternuts — native to New Brunswick but no further north — were also found, suggesting that the Vikings travelled further south into modern-day Canada. Back in the 1000s, the climate in the region was warmer, there was more vegetation, and the place was generally far more inhabitable than it is now. For whatever reason though, they abandoned L’Anse aux Meadows after less than a decade: maybe due to clashes with the aboriginal peoples, maybe just a desire to stay closer to home in modern-day Iceland and Europe. The Vikings traded red cloth and milk for fur, and refused to trade away their iron-smelted tools and weapons. Maybe that made the natives angry, who knows!

But yeah, it’s amazing that even after all these years, historians don’t know why either the natives or the Vikings left the area.

That brings us to today. L’Anse aux Meadows (a “Franglais” name of unknown origin, perhaps a corruption of “à la Médée”) was only excavated by Norwegian explorer/archaeologist couple Helge Ingstad and Anne Stine and turned into a national park in the 1960s. As scenic as the area is, overgrown indentations aren’t exactly the most interesting thing to look at, so Parks Canada commissioned a reconstruction of a Norse village, using the details gleaned off of their dig and filling out the details with architecture in Iceland back in the 1000s.

It sounds totally hokey, with costumed actors (Parks Canada employees, everybody!) playing the part of Norse men and women doing chores and making food (that for liability reasons, no one’s allowed to eat), but it’s incredibly well done. Yes, it’s a little odd to wander around some low, grass-covered sod houses as a tourist with modern technology on hand, but the rooms are furnished and unrestricted to visitors. We could sit, touch things, ask the actors questions and receive very detailed, historical answers (and better yet, ask who they “are” or hear them recount some of “their” stories), and just have a sense of the place.

And not a horned helmet was to be found. 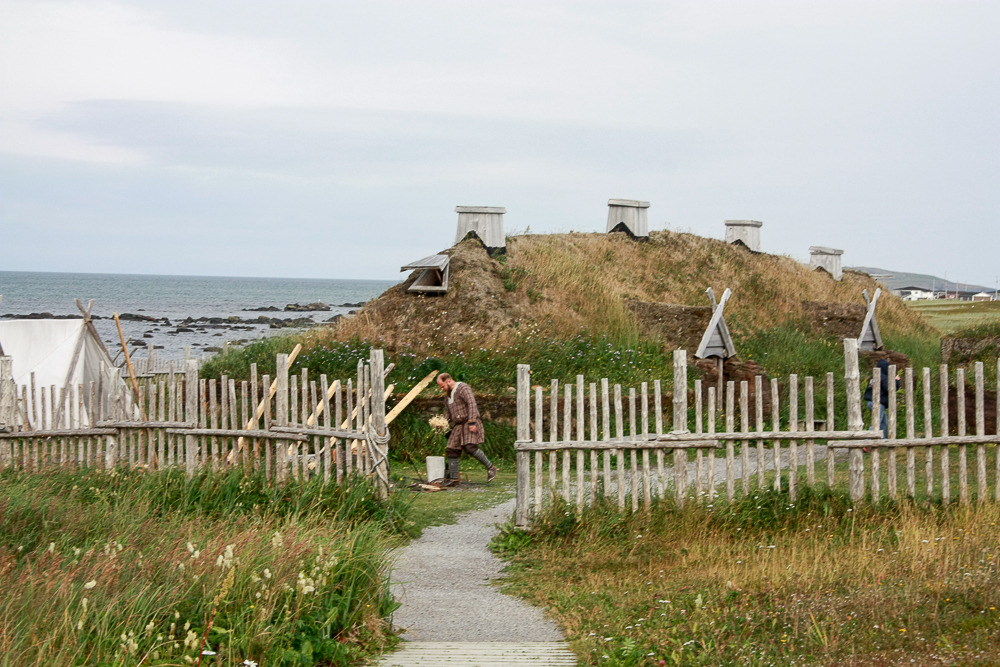 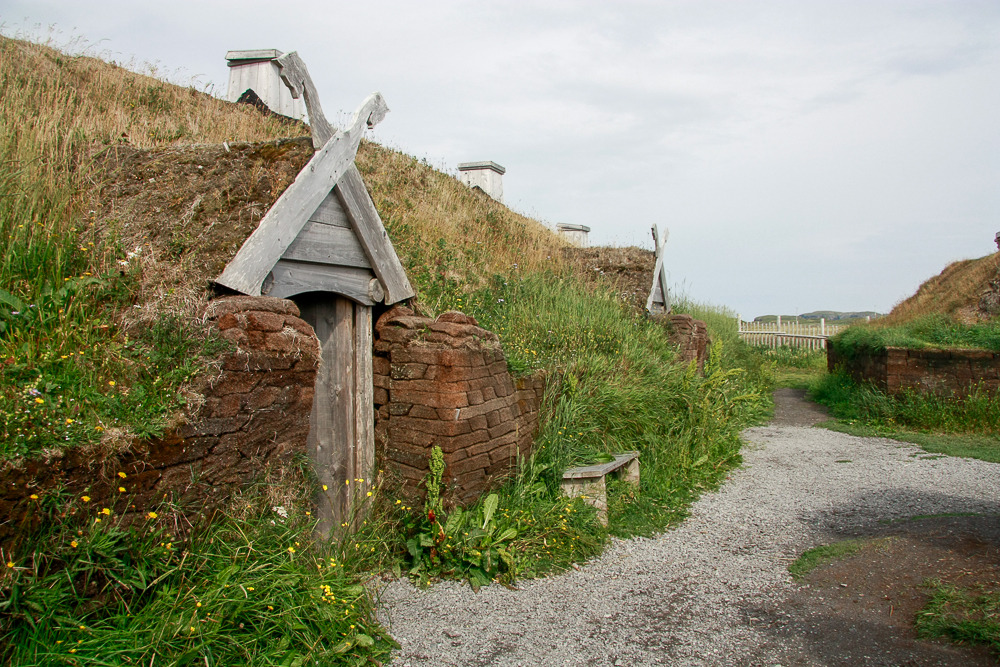 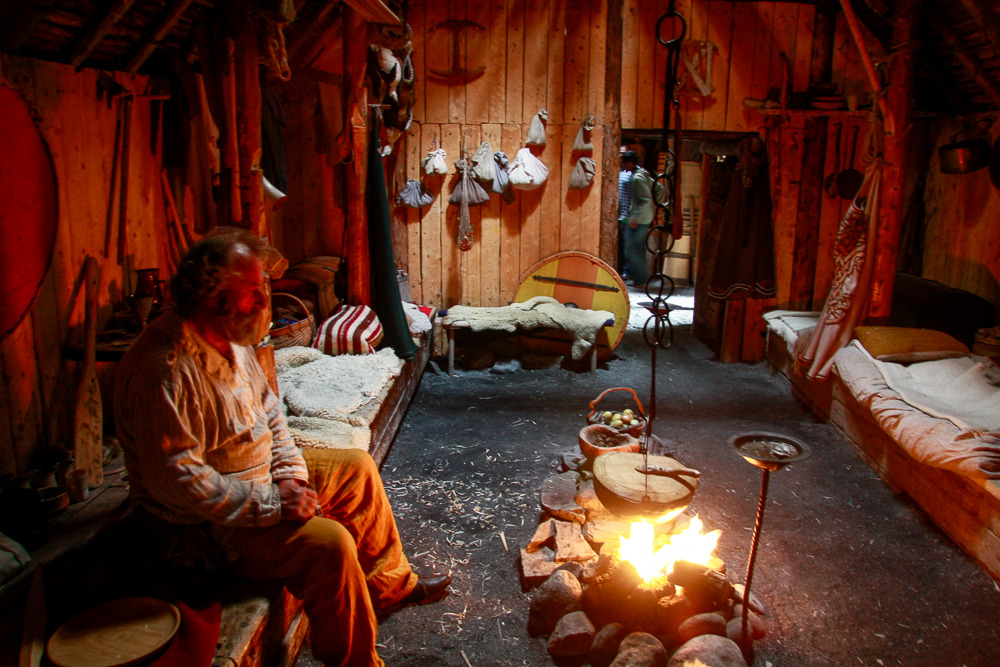 While no Viking food can be had around these areas, you definitely can get Newfoundland food. Most prevalently, there are jams and preserves made of partridgeberries, squashberries, blueberries, bakeapples (cloudberries)… you name it, you don’t name it, it’s there. I’ve never even heard of some of them, but they’re all delicious, and you can get them in ice cream too. There’s fish and brewis — dried salted cod (which I did find hanging outside a few households) and hard tack (dry bread as tough as a brick) are soaked overnight then boiled, mashed together, and served with scrunchions. Delicious, but a little overwhelming and samey if you have a giant (and I mean giant, cause that’s the only portion size you get) plate of it.

This being the end of my stay in Newfoundland, I was a little bit disappointed that I didn’t see as many moose as people all over the island said I would! So, for my last meal out, I thought I’d bring one to my plate… Moose burgers are delicious, and they taste a bit like lean beef with a hint of gaminess.

I gotta say, I had a very packed two weeks, driving all over, and yet there’s still so much left to see and try — I didn’t hit the south coast, didn’t cross to Labrador, missed out on iceberg season, and most importantly, I didn’t even get screeched in! Furthermore, with how friendly people were everywhere, every single place I went this time, I’d love to go back to. There’s no doubt about it, I’ll be returning to Newfoundland! 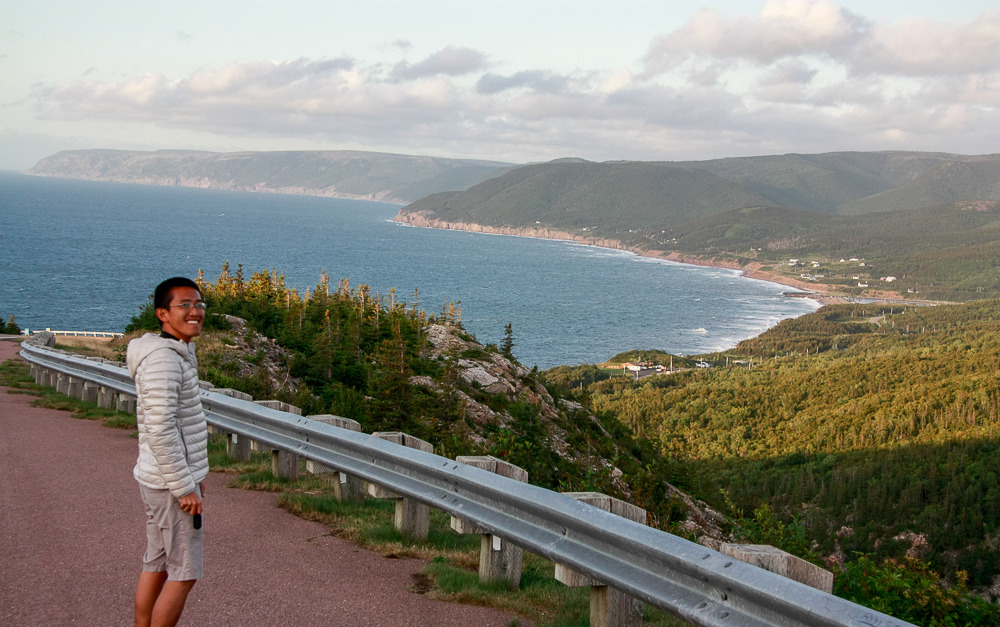