There’s one pretty obvious thing people come to Kenya for.

Nairobi’s not the safest place out there, which made wandering around difficult especially come evening time, and its suburban sprawl makes it even more difficult to get to know. Despite the sea of brightly-painted matatus (minivans plying a few hundred routes around Nairobi and beyond), the city feels like America in some ways. Outward religiosity (in the form of garish matatus and buses covered in Christian slogans) flying right in the face of an in-your-face sexualised pop culture (in the form of urban music with explicit lyrics being blared by those same buses, plus restaurants playing some pretty racy music videos) is one thing, along with big western shopping malls far from the city center, fast food restaurants (they love their fried chicken and fries), skyscrapers, businessmen in suits everywhere, and heavy traffic, but the biggest similarity I see is how everyone seems busy and has somewhere to go. Several Kenyans I talked to outside Nairobi mentioned that last sticking point, and some compared it to America as well. Few if any people paid any mind to me, which was a jarring but somewhat nice change from the constant attention in Ethiopia and Somaliland, but at the same time, it made them hard to get to know. While still developing and doing so quite rapidly, Nairobi is getting up there with the likes of other cosmopolitan multicultural world cities, for better or for worse.

So instead, I spent most of my time in Nairobi looking at animals, and prepping a trip to look at more animals. Naturally. 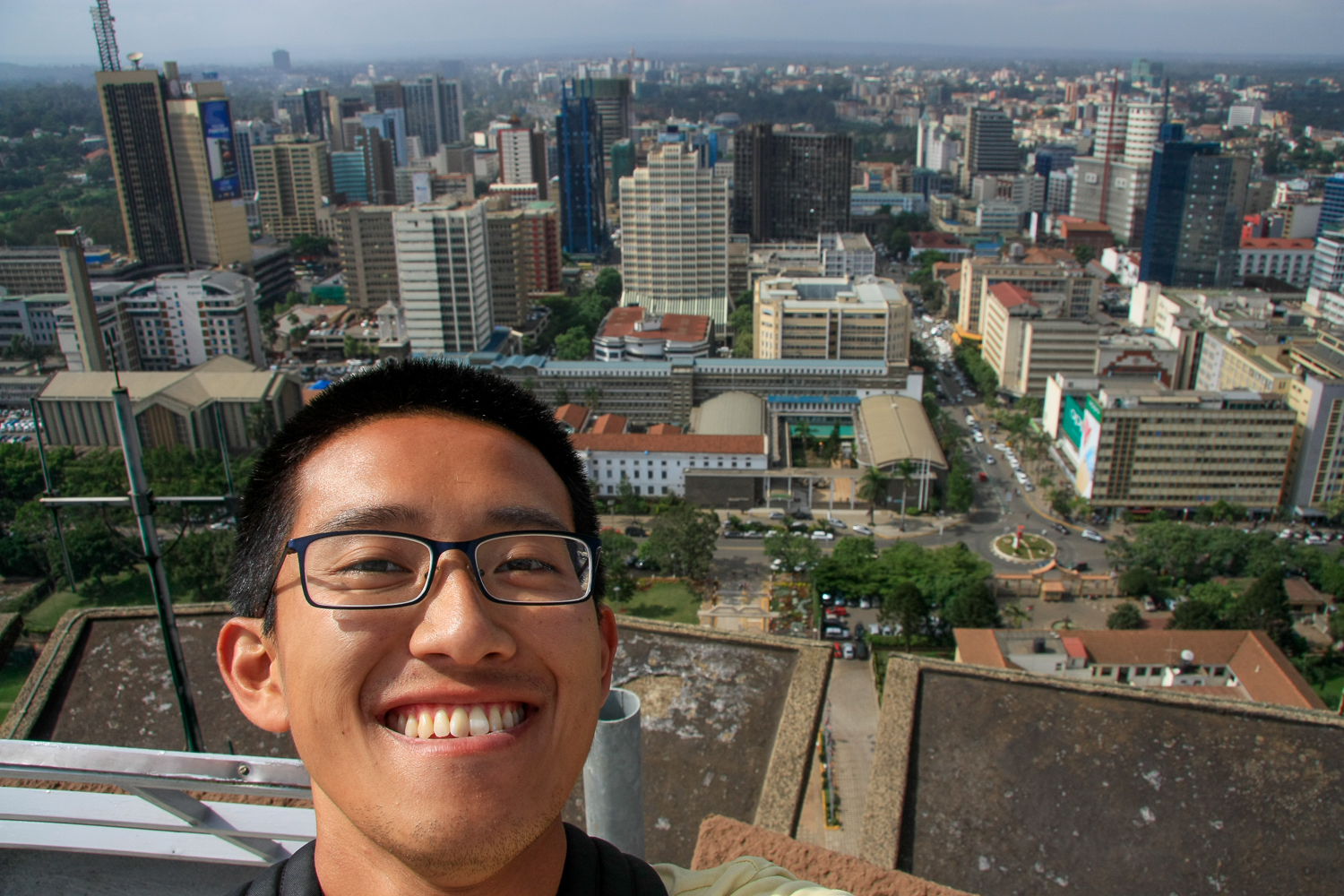 (Well, except for that.)

Nairobi’s prime tourist attractions are the elephant orphanage and the giraffe sanctuary, both focused on conservation and located well outside the city center. Each baby elephant had a rescue story that the orphanage shared — babies that fell into uncovered wells, ones whose mothers were killed by poachers, ones who ran afoul of some farmers and got attacked — and were adorably drinking milk from bottles, spraying mud around, and playfully rubbing against spectators and orphanage workers. The giraffe sanctuary is a breeding center for the highly endangered Rothschild giraffes, and offered resident giraffes the opportunity to freely roam the 120 acre grounds for food, or approach the humans willing to feed the pellets in an elevated hut. They were also totally willing to make out with anyone… 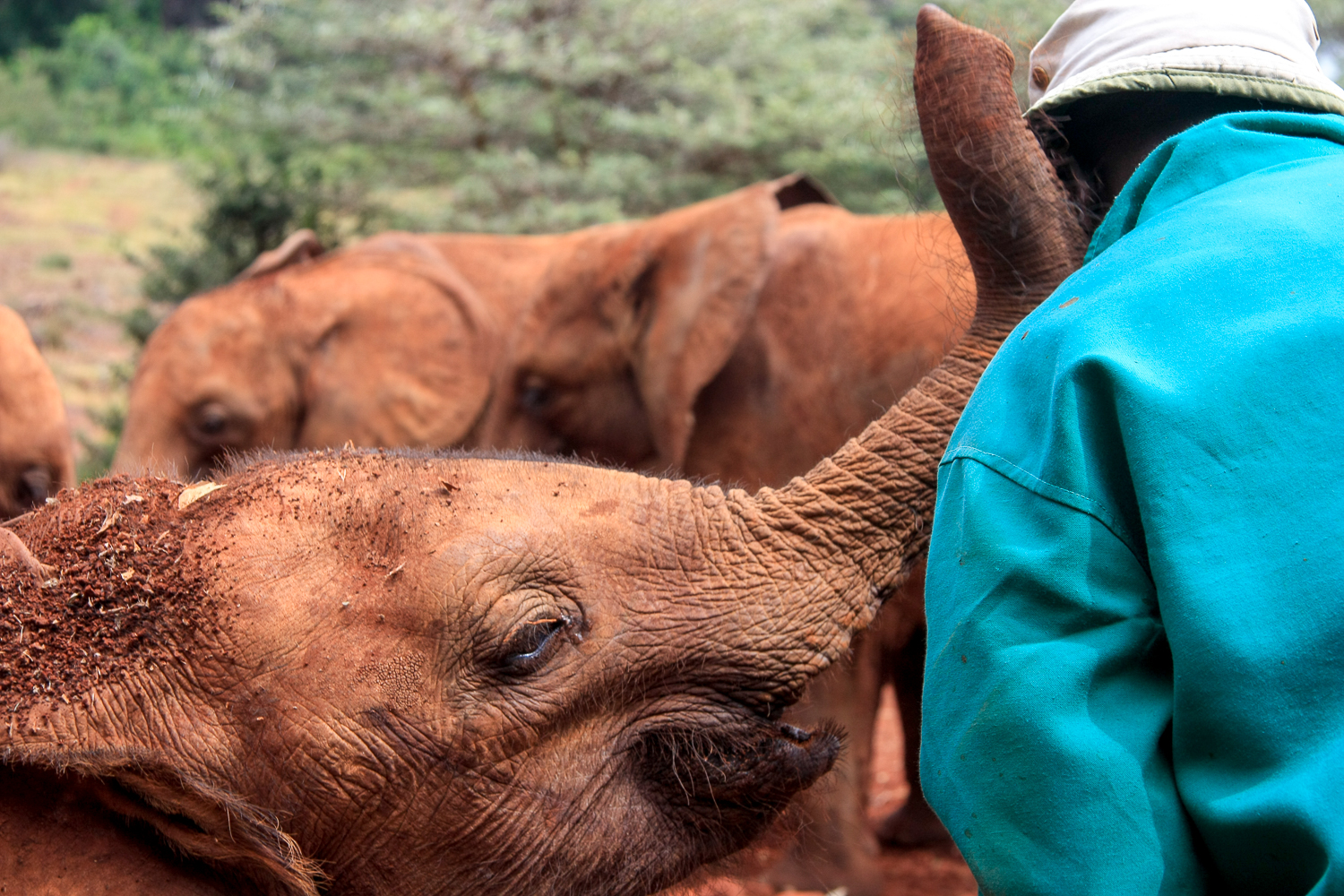 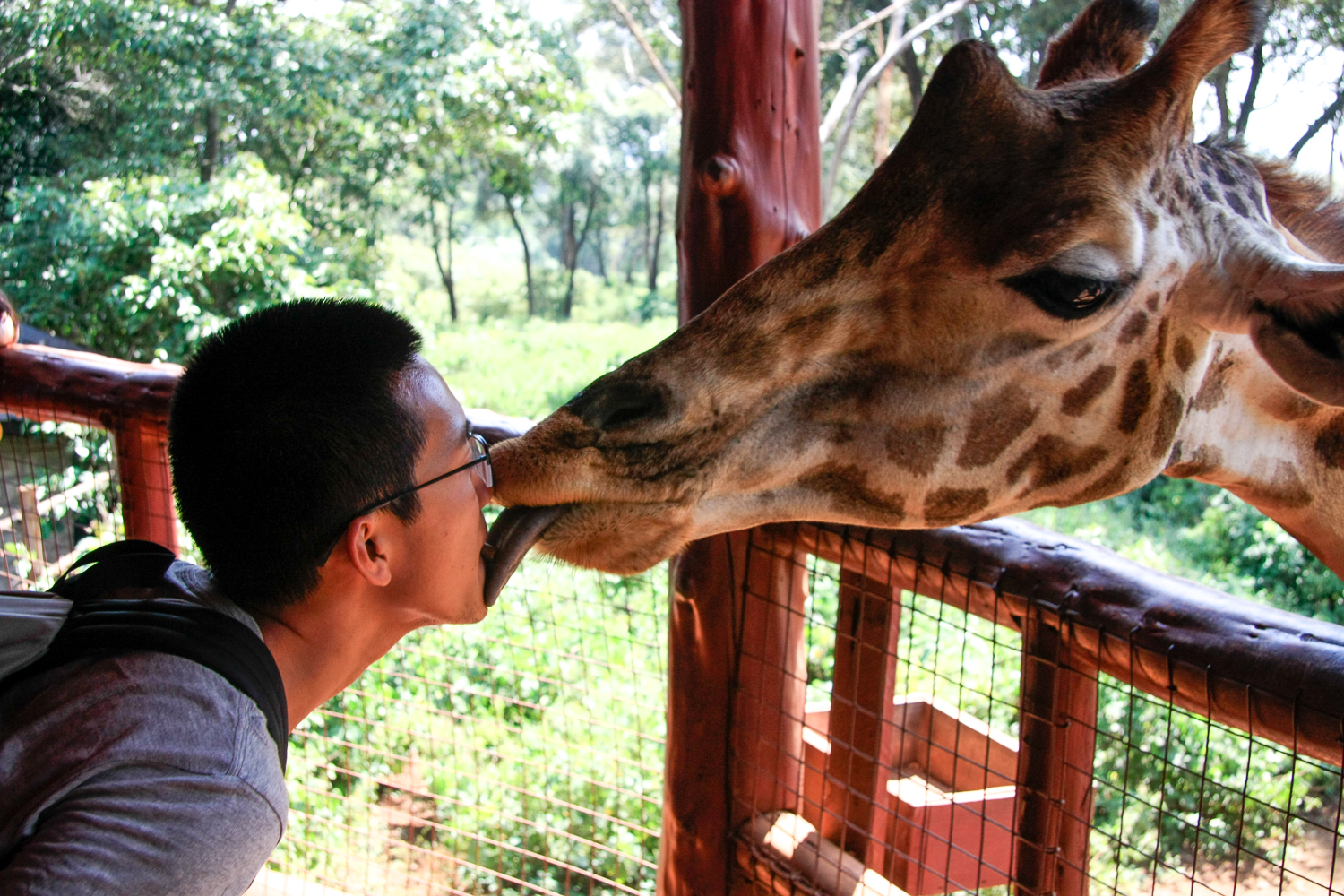 I proceeded with a three-day safari to the Maasai Mara National Reserve. Best known for the annual wildebeest migration from July to October, it’s still pretty amazing at any other time of the year, with its beautiful green landscape and animals everywhere. You can’t possibly go there and not see an animal. From a high vantage point, you can see herds of gazelles, impalas, buffaloes, wildebeest, hartebeest, zebras, giraffes… all without even trying! But drive around, and you might get lucky: perhaps you’ll see a hard-to-spot leopard in a tree. Or female lions and cubs out on the hunt. Maybe a lazy cheetah. A herd of elephants crossing right in front of you. The Big Five (lions, elephants, buffaloes, leopards, and rhinos) are all present in the park, and I managed to see all but the rhino.

Enough writing. You clearly came here for the photos. 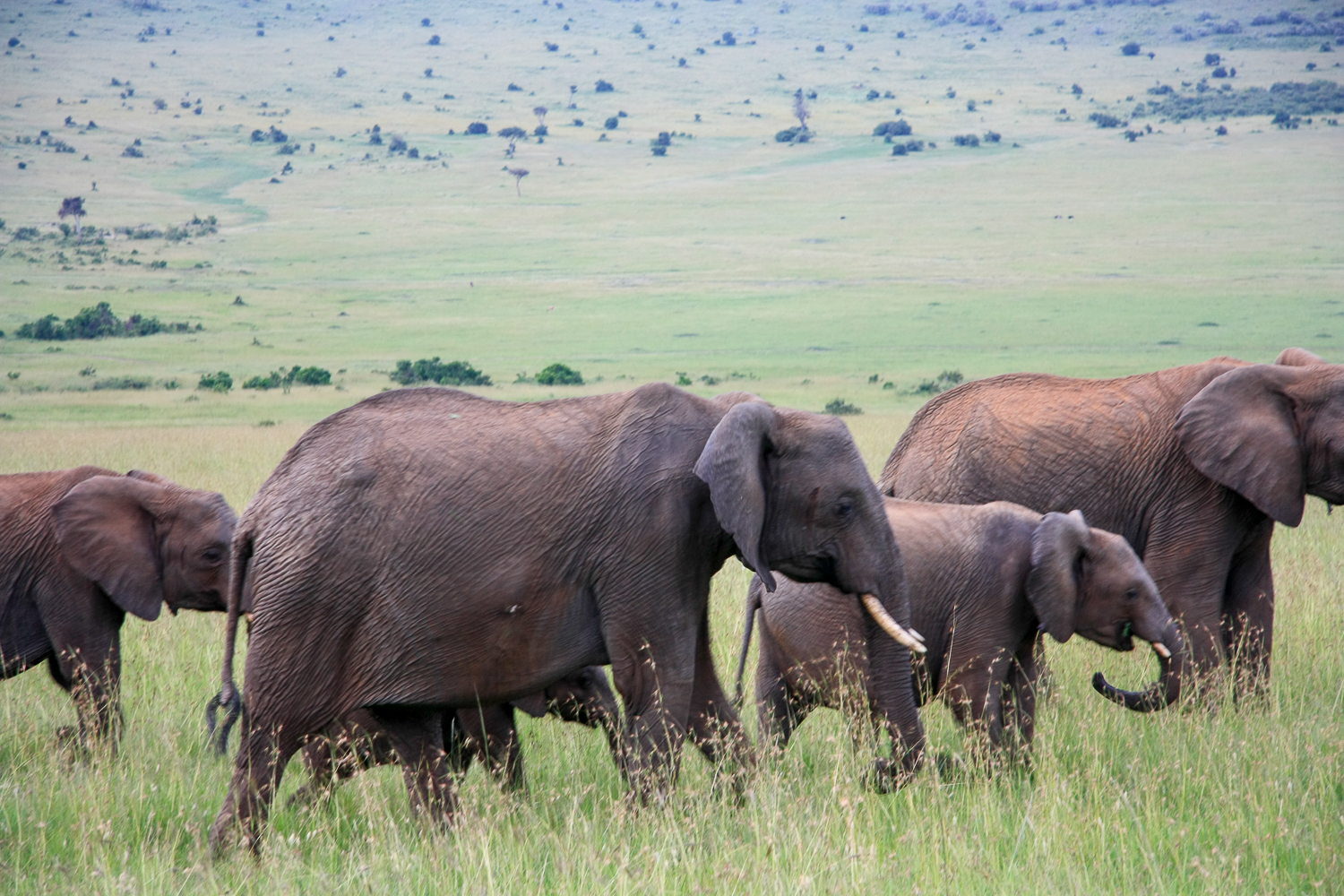 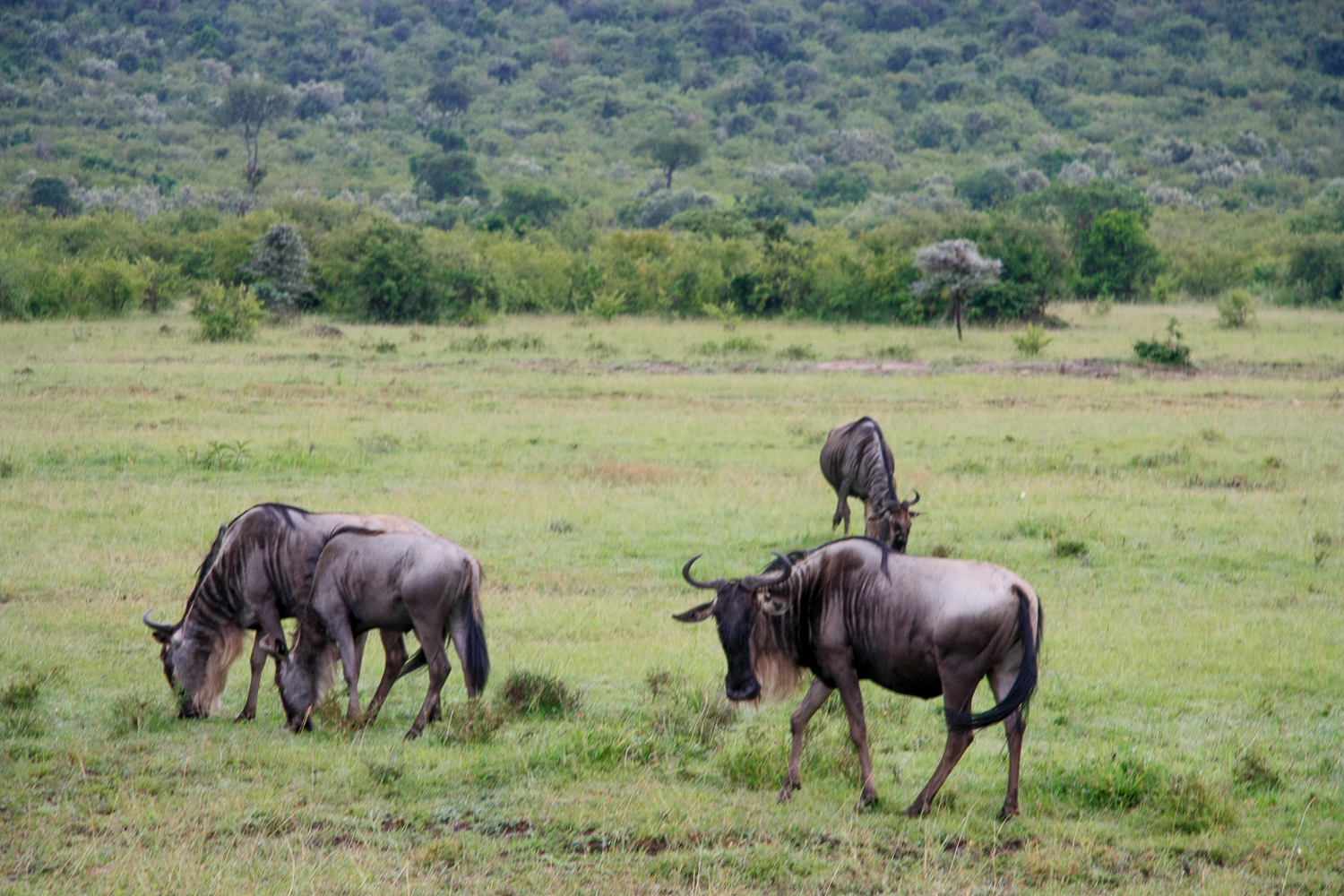 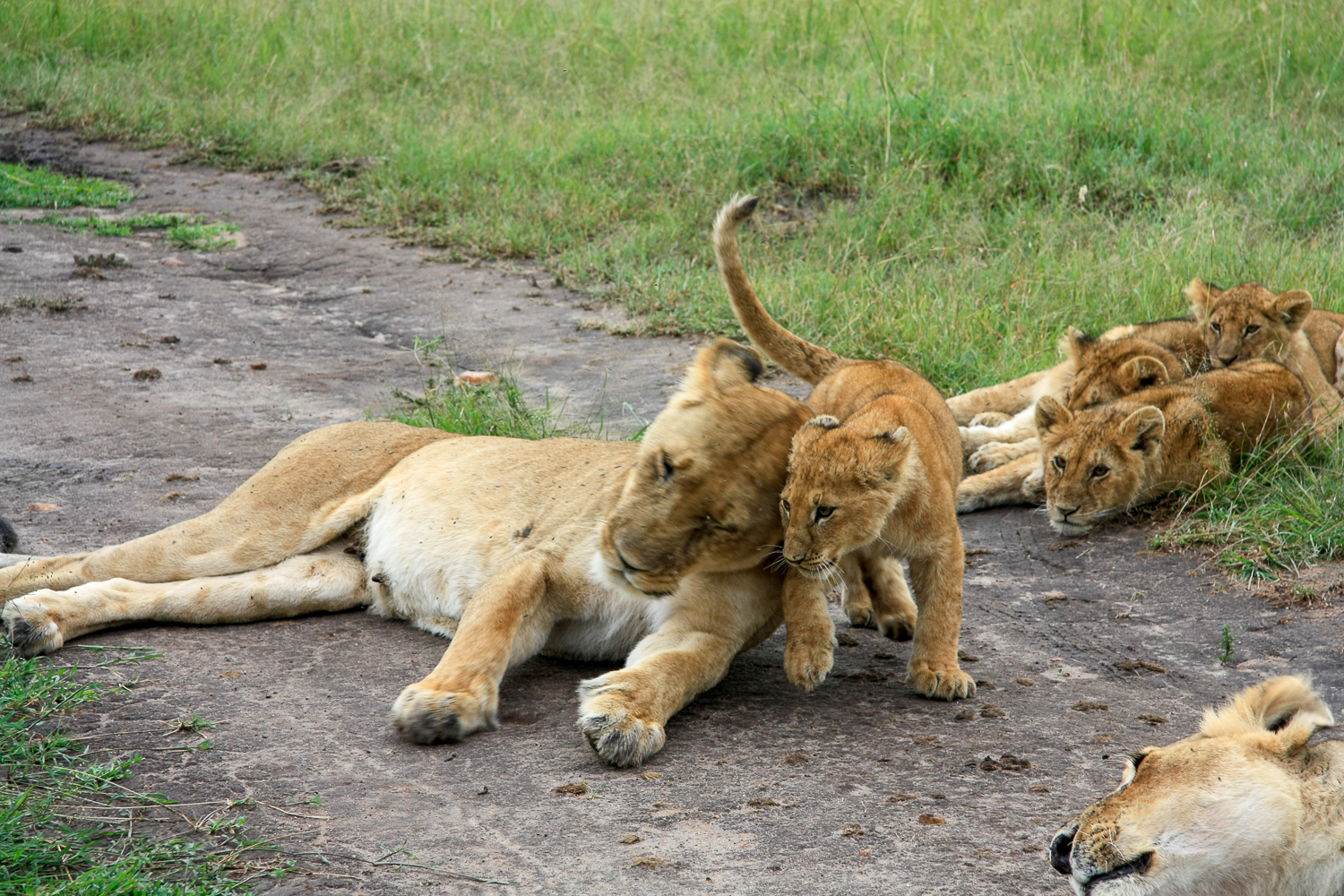 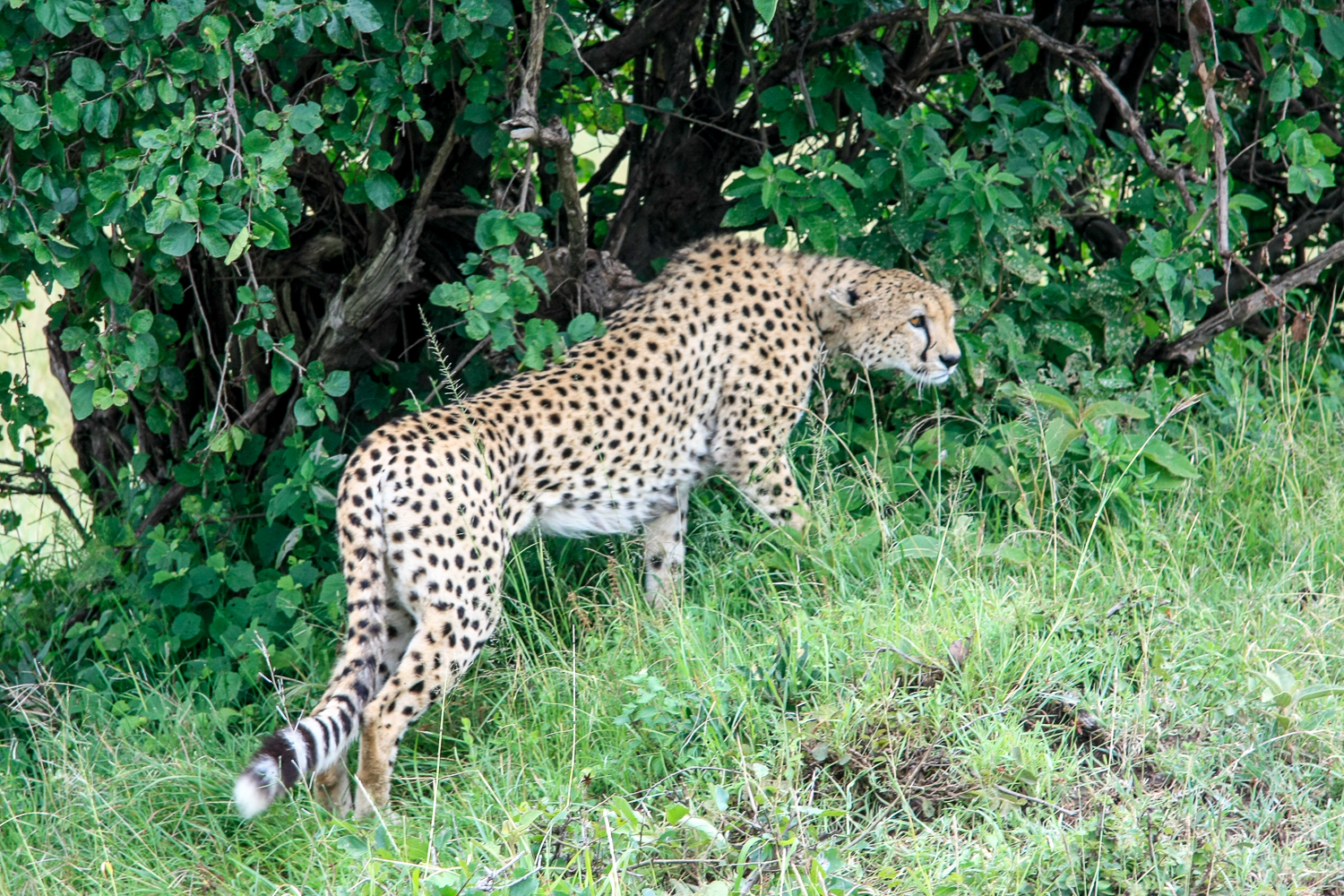 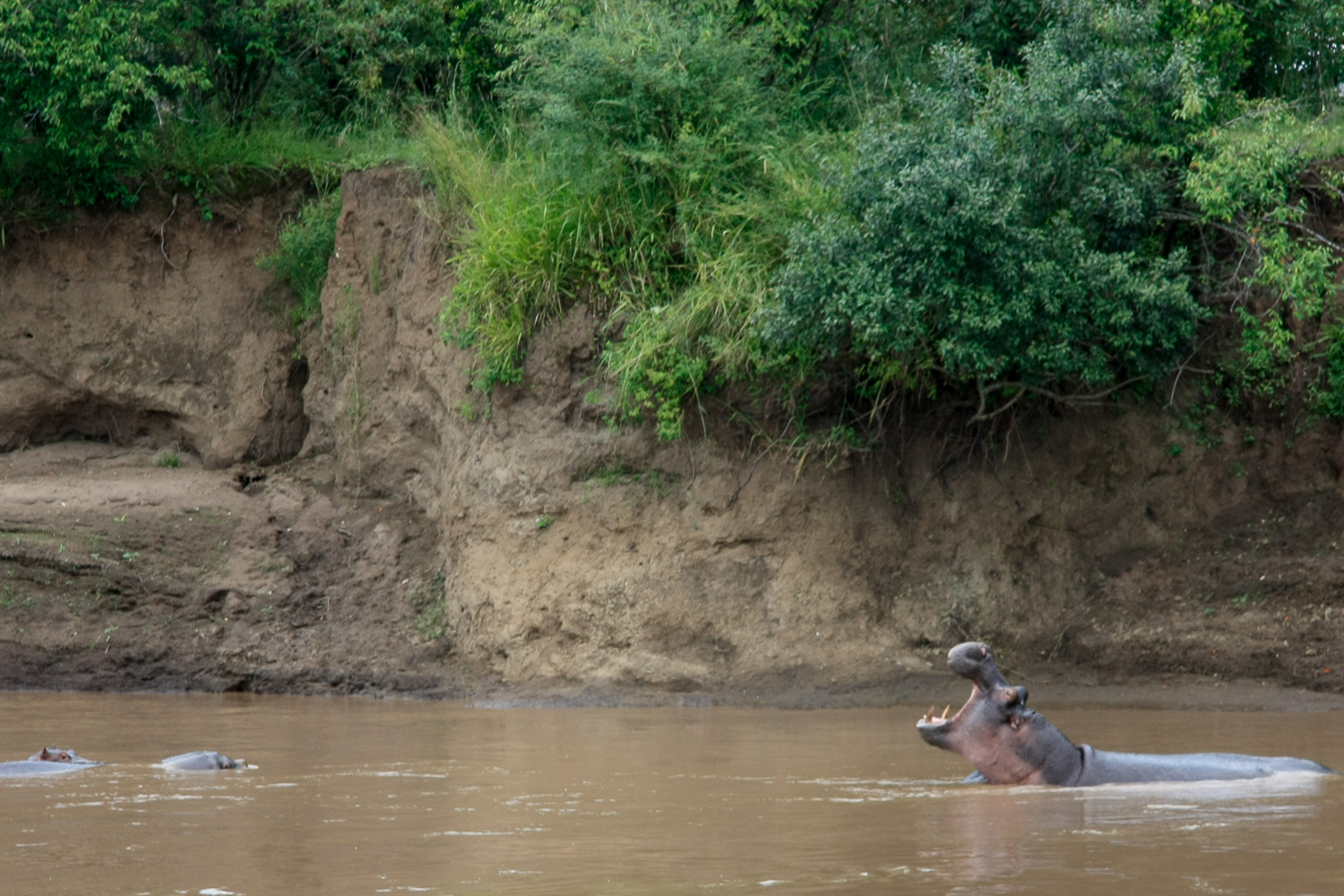 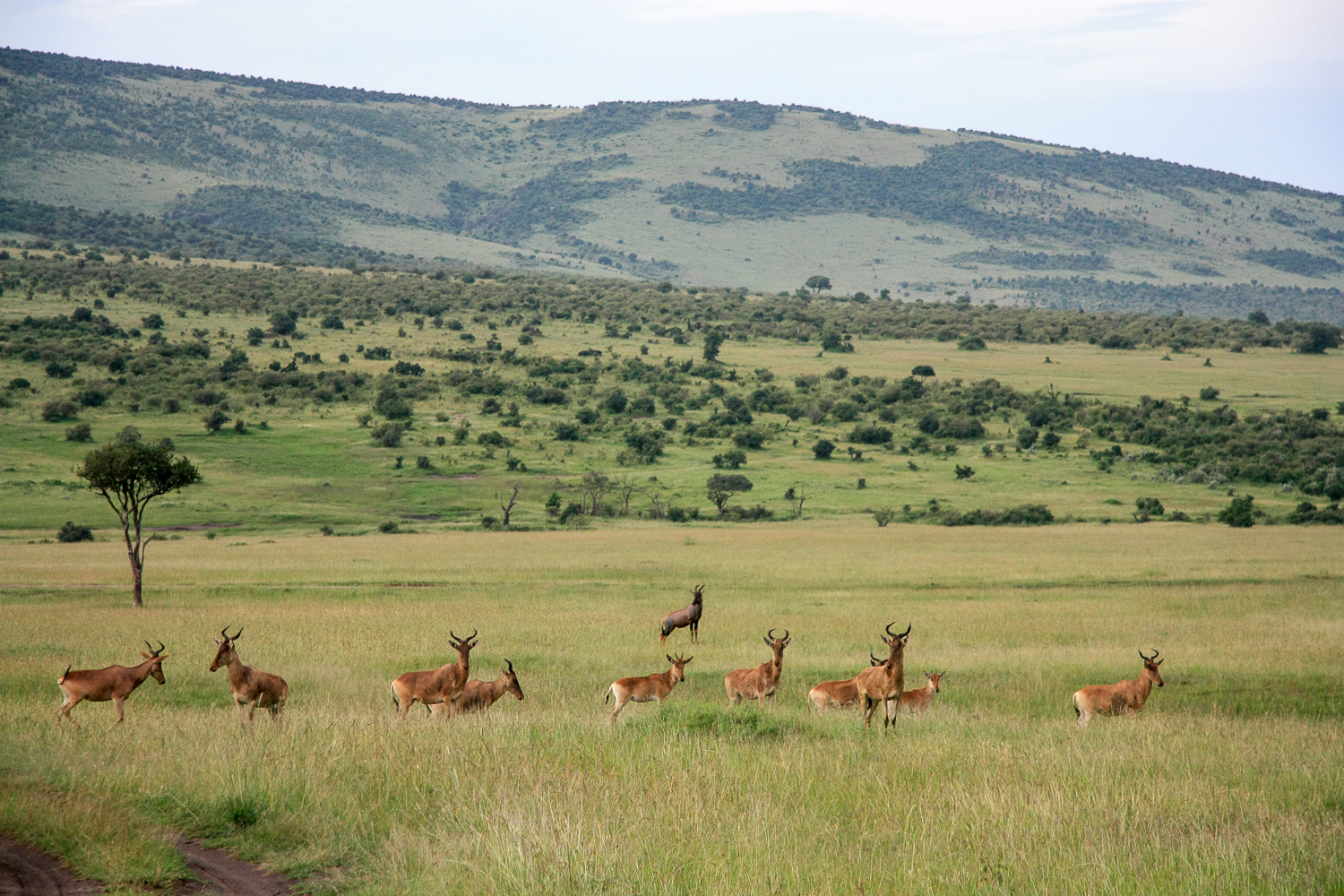 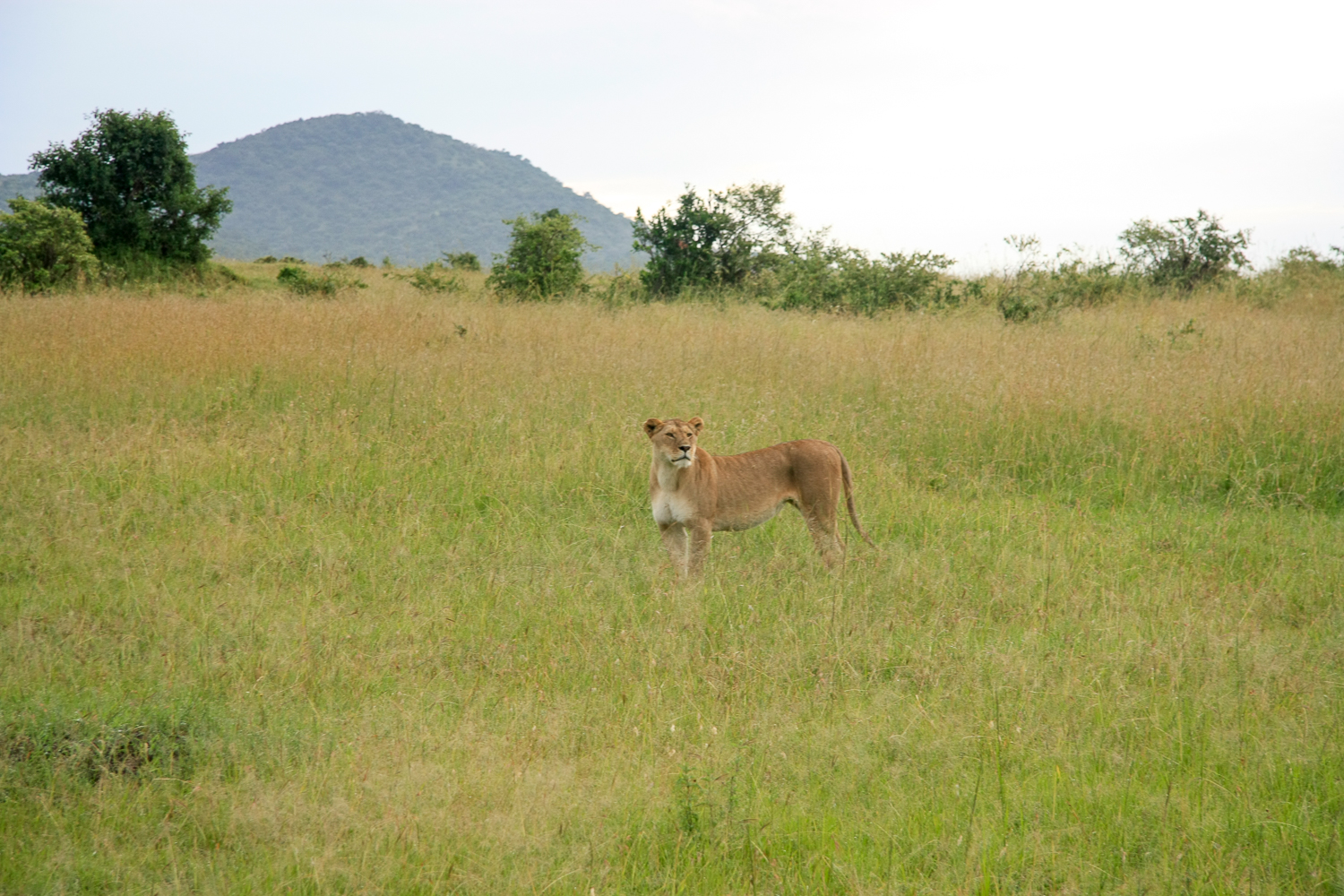 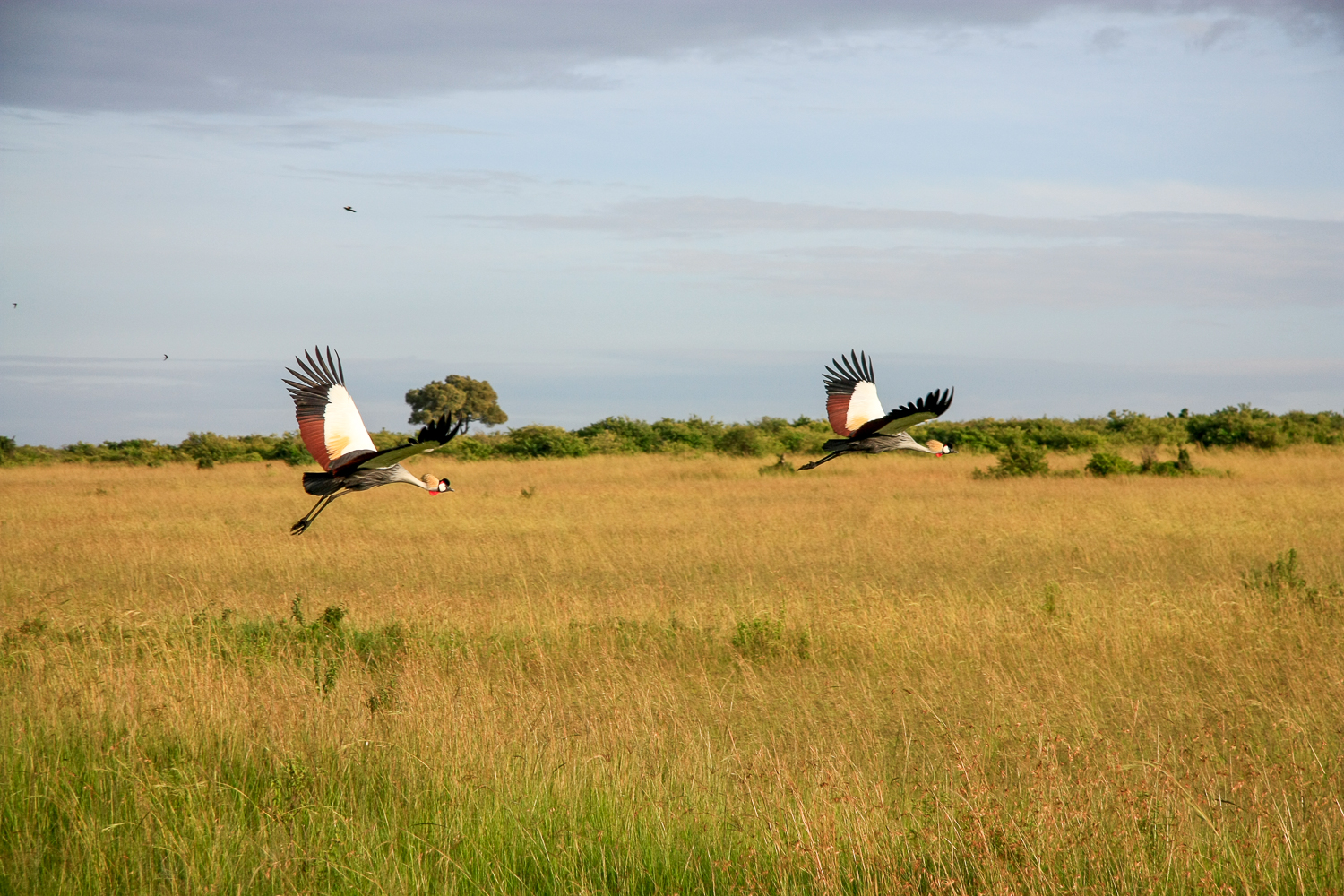 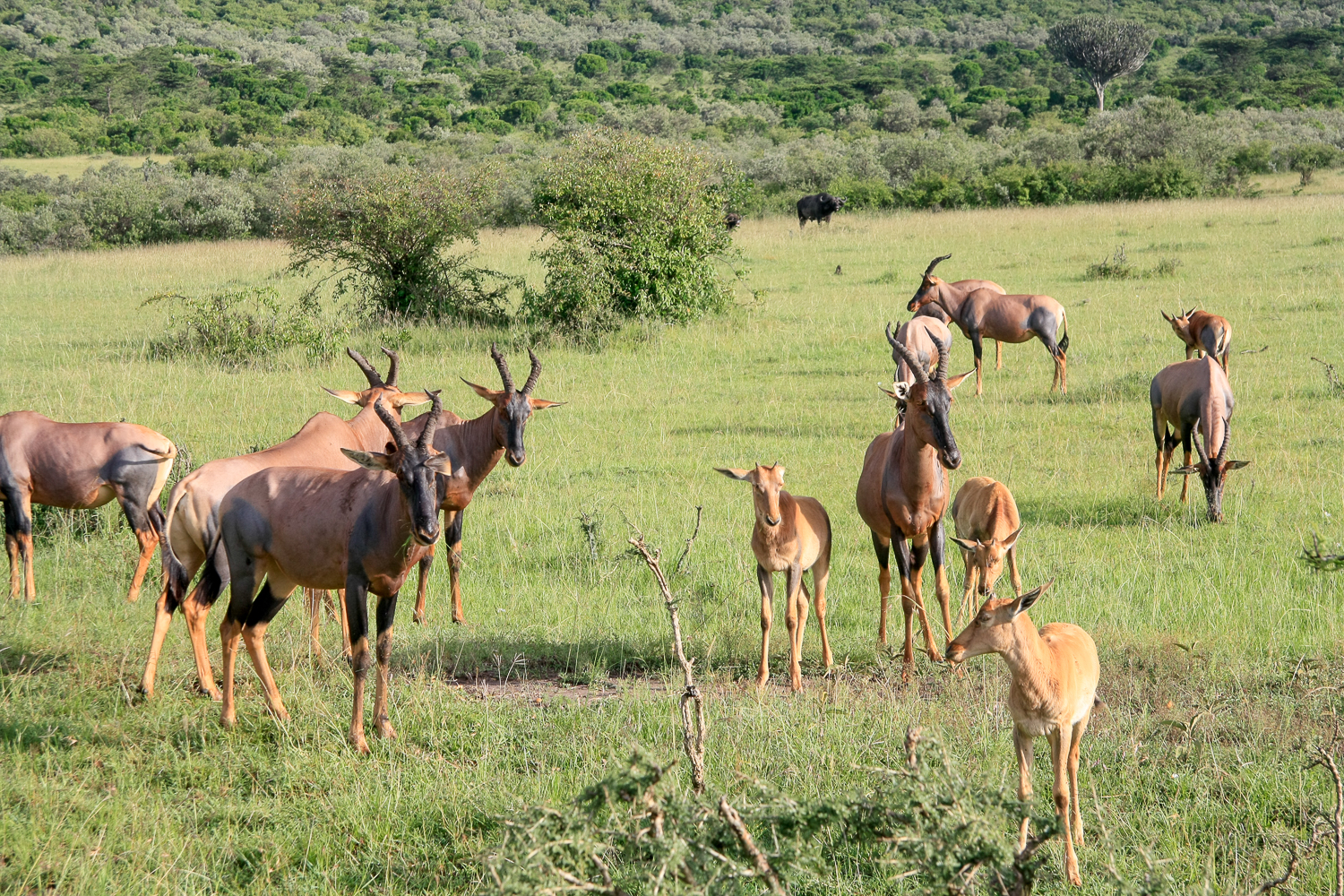 The namesake Maasai also live in the park, and we had an opportunity to visit one of their villages. Greeting us with a welcome dance that included a lot of their trademark jumping, we had a look in one of their homes, the village compound, and also watched a fire-making demonstration. They explained some of their body modifications: ear stretching for the first-born, cartilage piercings for the second-born, and some showed off lines of scarification on their arms or legs. 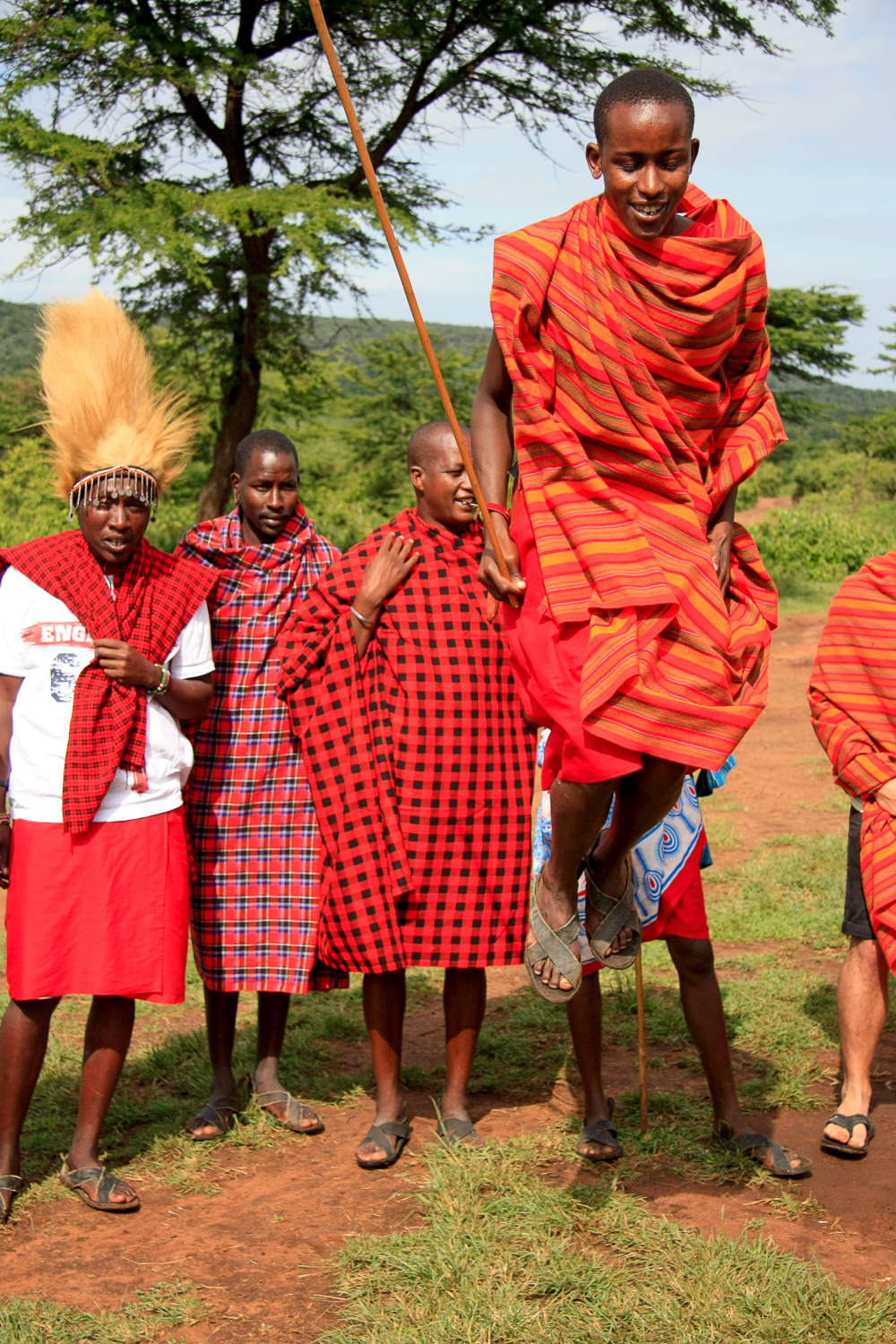 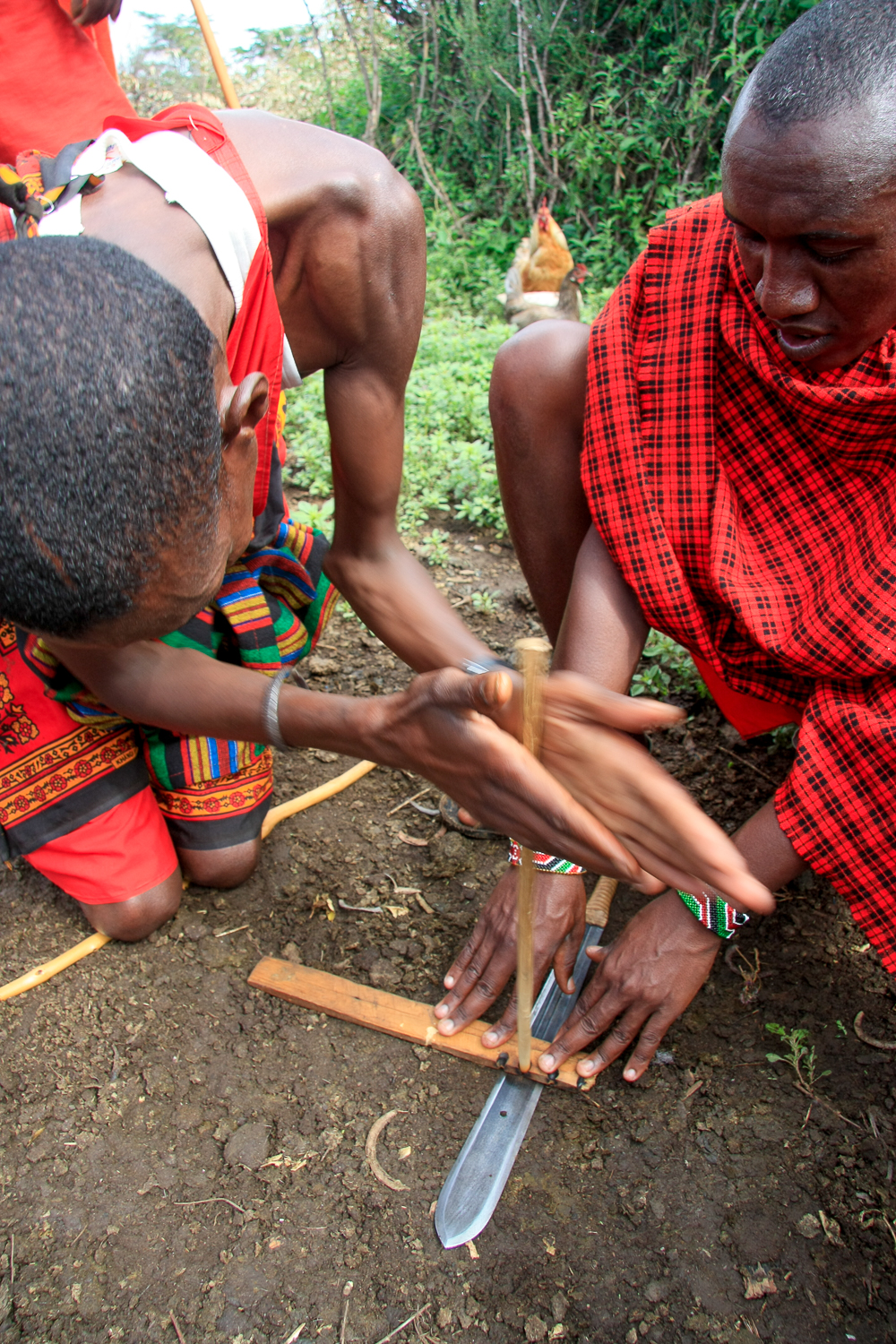 But more interesting is the traditionist-modernist lives they live: they’re in mud-and-cowpie huts. They’re still pastoralists depending on cattle (meat, milk, and blood, the three of which makes up virtually all of their diet) and sheep (one sheep = 50 kg of maize in the markets, and maize means beer), and cowpies litter the muddy village compound. Men marry multiple wives, building a house for each one. Teenage boys, after circumcision, live in the bush for three years, learning to survive on medicinal plants and hunted meat. The village has to move every nine years due to termites. But at the same time, most if not all children go to school, and most people spoke great English and Swahili in addition to their own language. Some choose jobs in the big city, but might spend only six months there before returning home — there’s a strong urge to retain their identity. The boys in particular seem to like walking down to a community center with a TV and watch Manchester United or Arsenal football matches. Many of them carry smartphones, even using mobile Facebook. Most people in the village were traditionally and modernly dressed at the same time: usually-red blankets and various adornments draped over plain shirts and jeans. 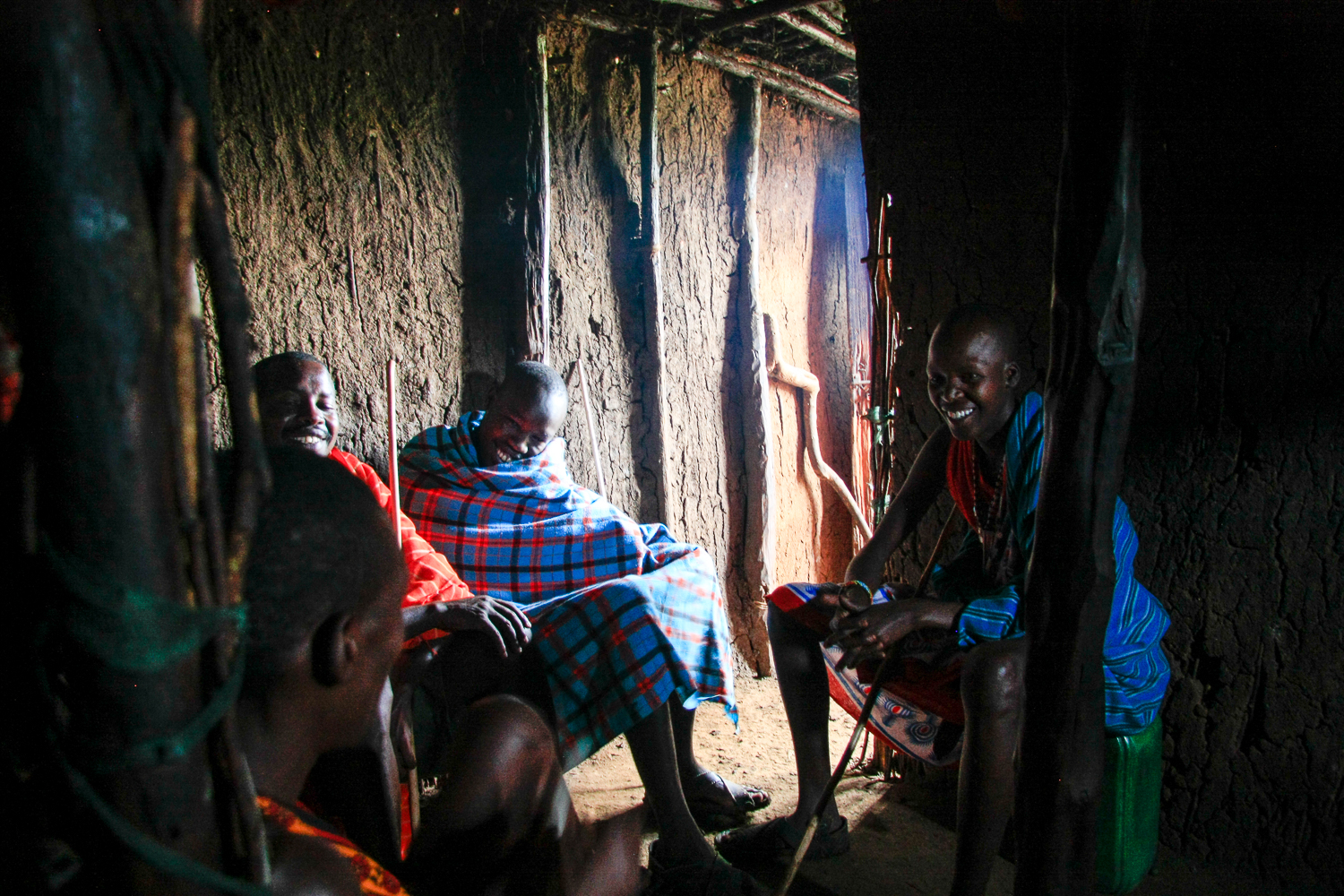 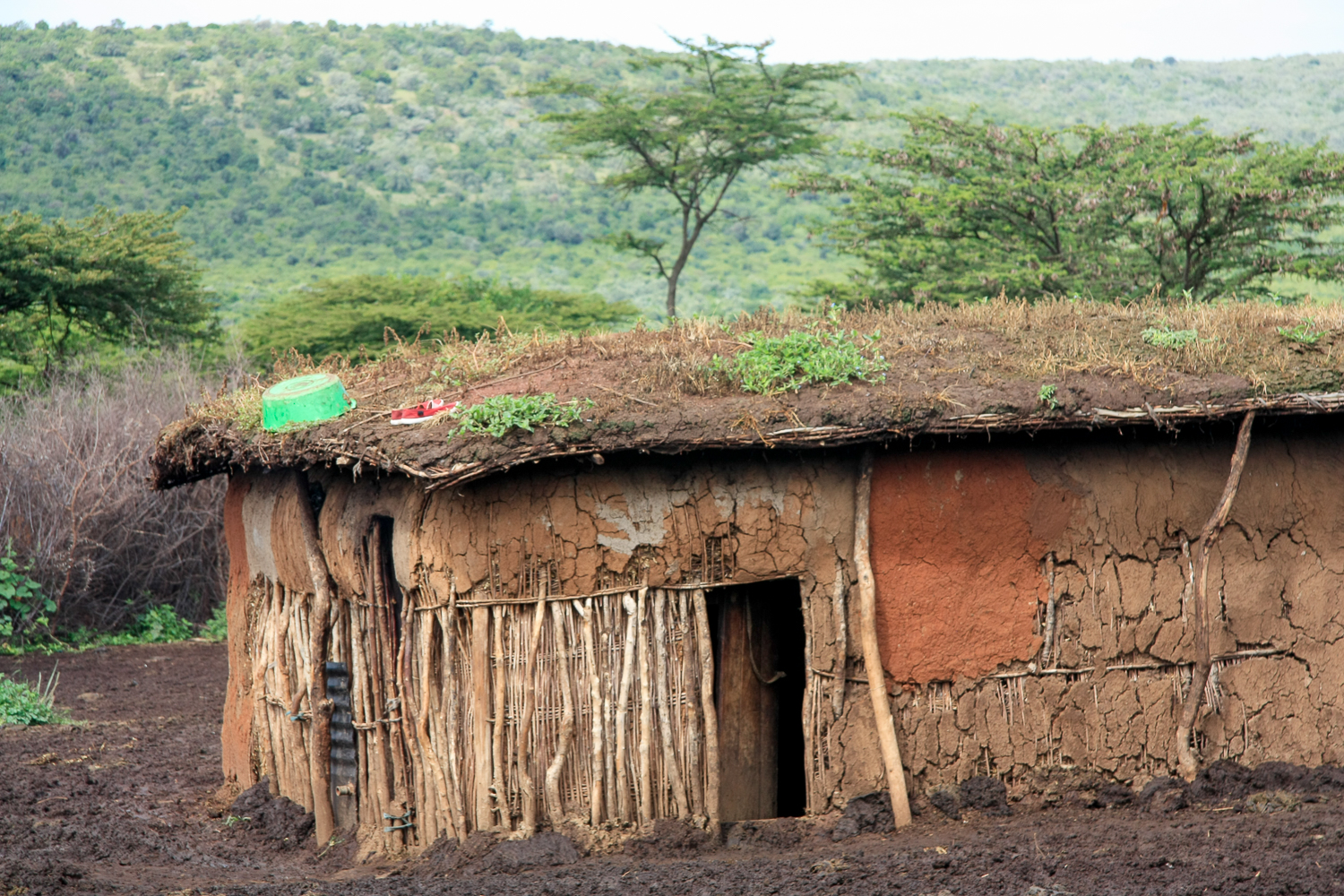 After the safari, I moved onto Lake Naivasha, next to Hell’s Gate National Park. While there aren’t any of the Big Five present there, it was a wonderful opportunity to get close to zebras, gazelles, warthogs, and giraffes — the park is free to bike and walk around — with a stunning backdrop of sheer rock walls and a gorge. The animals here are so much larger than I’m used to, and they graze right out in the open — my first instinct is that big animals tend to hide! It’s a world away from Canada, that’s for sure. 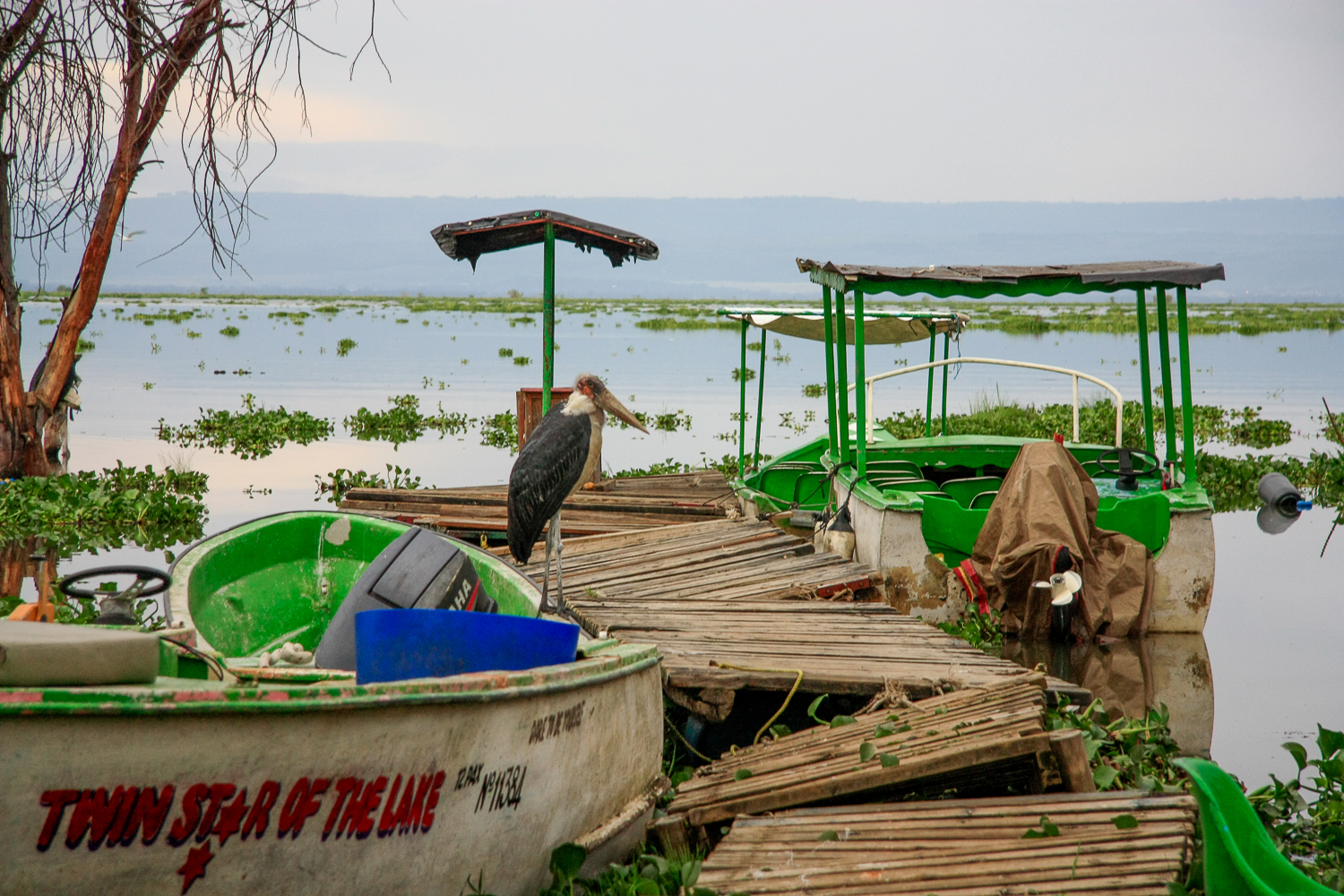 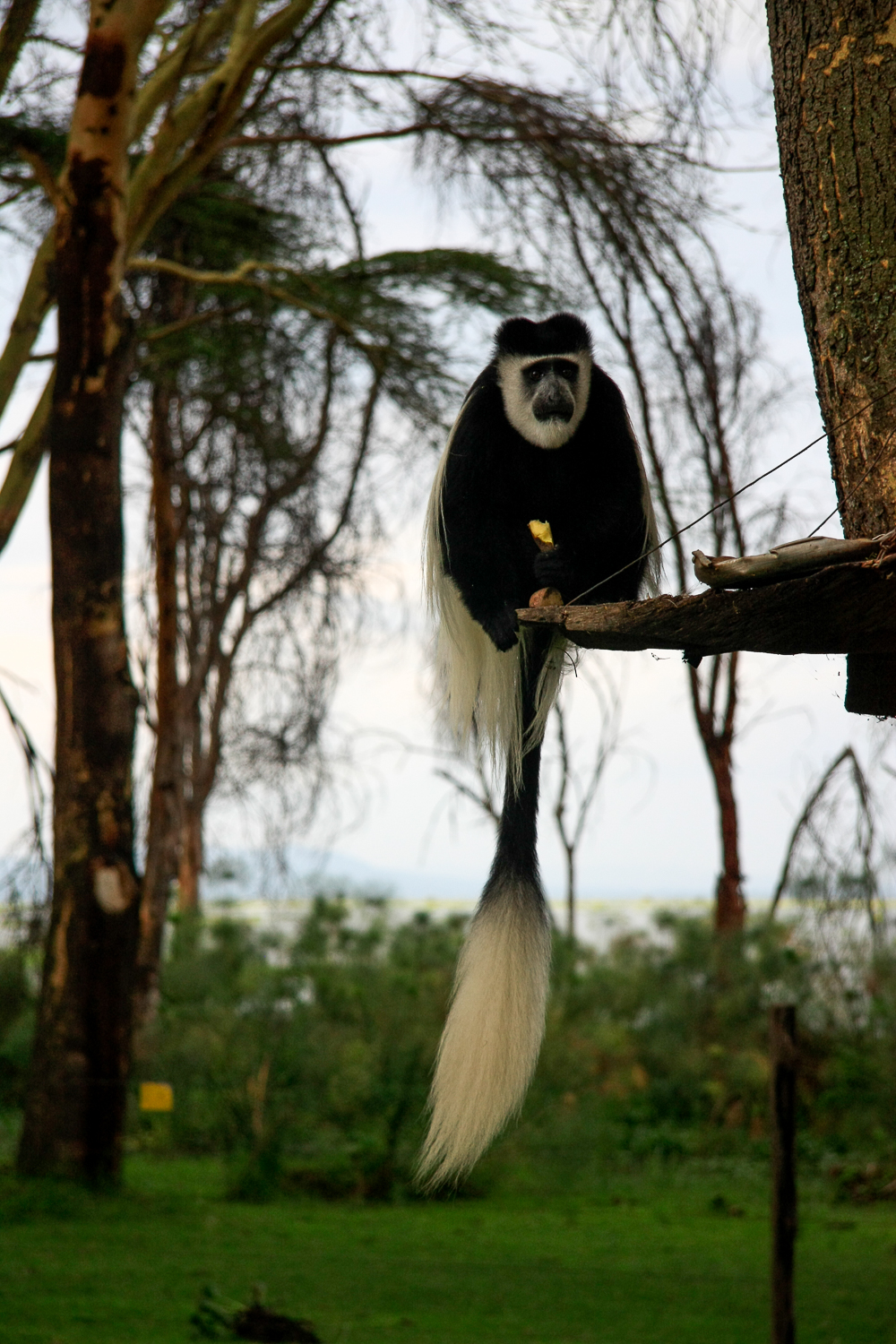 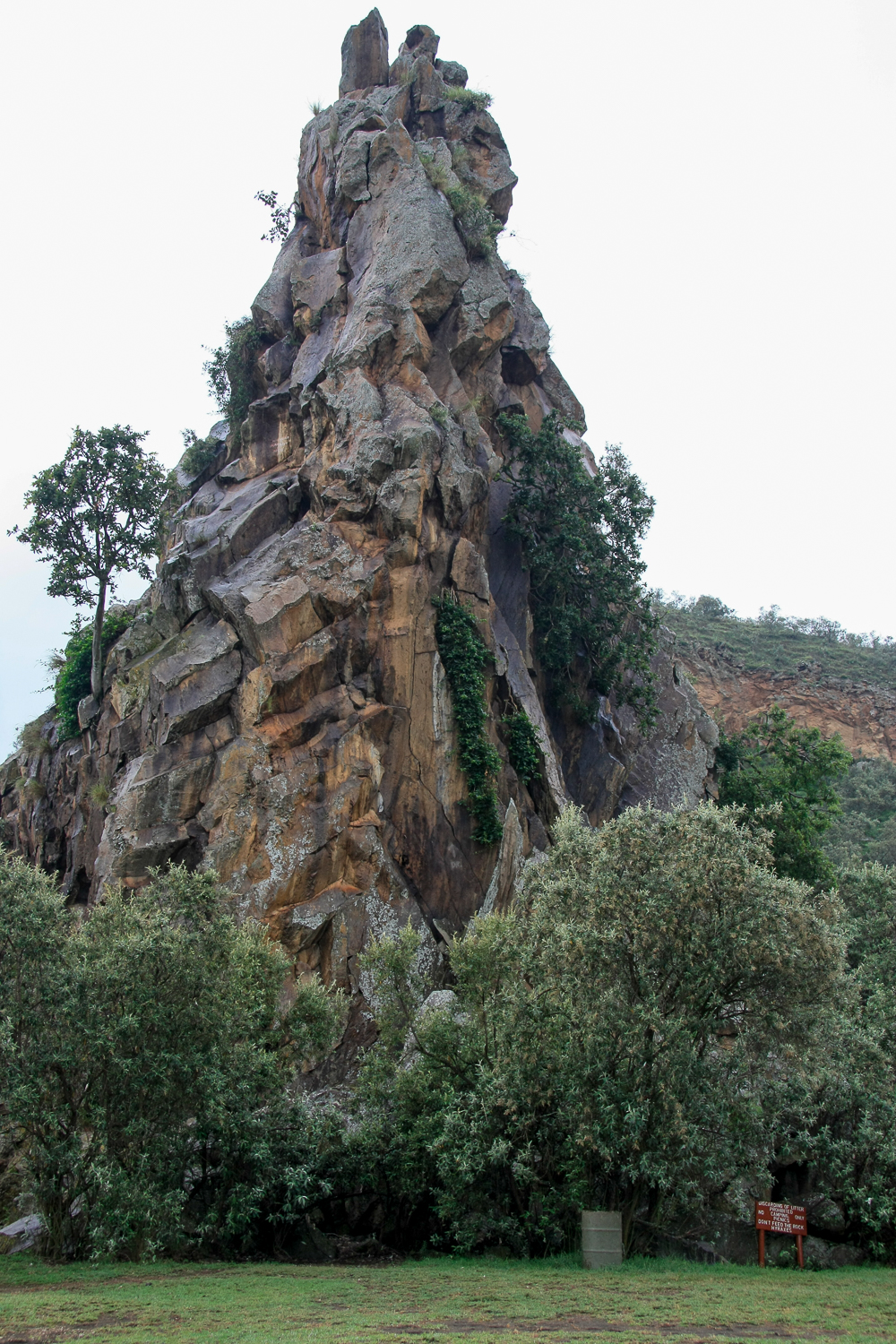 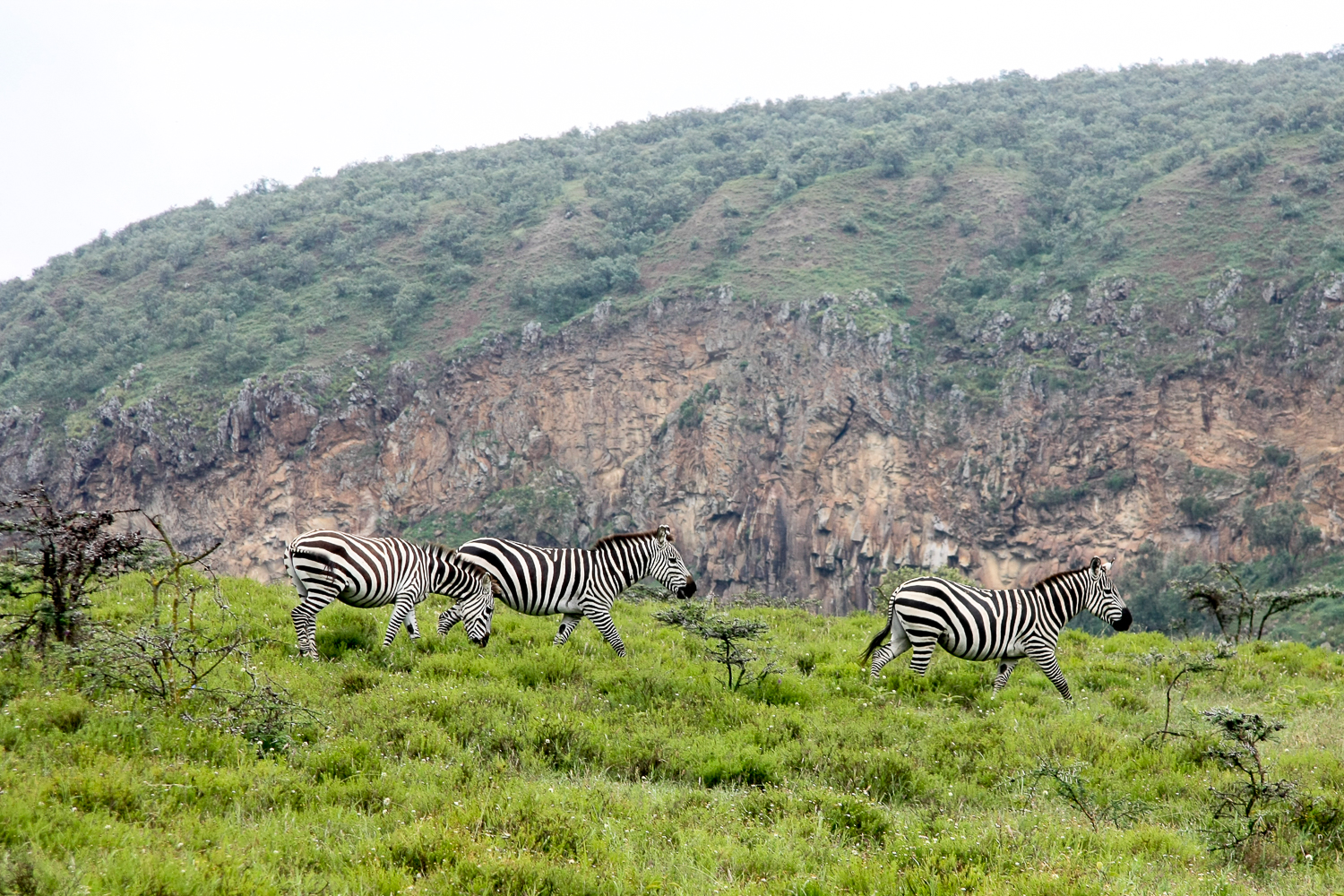 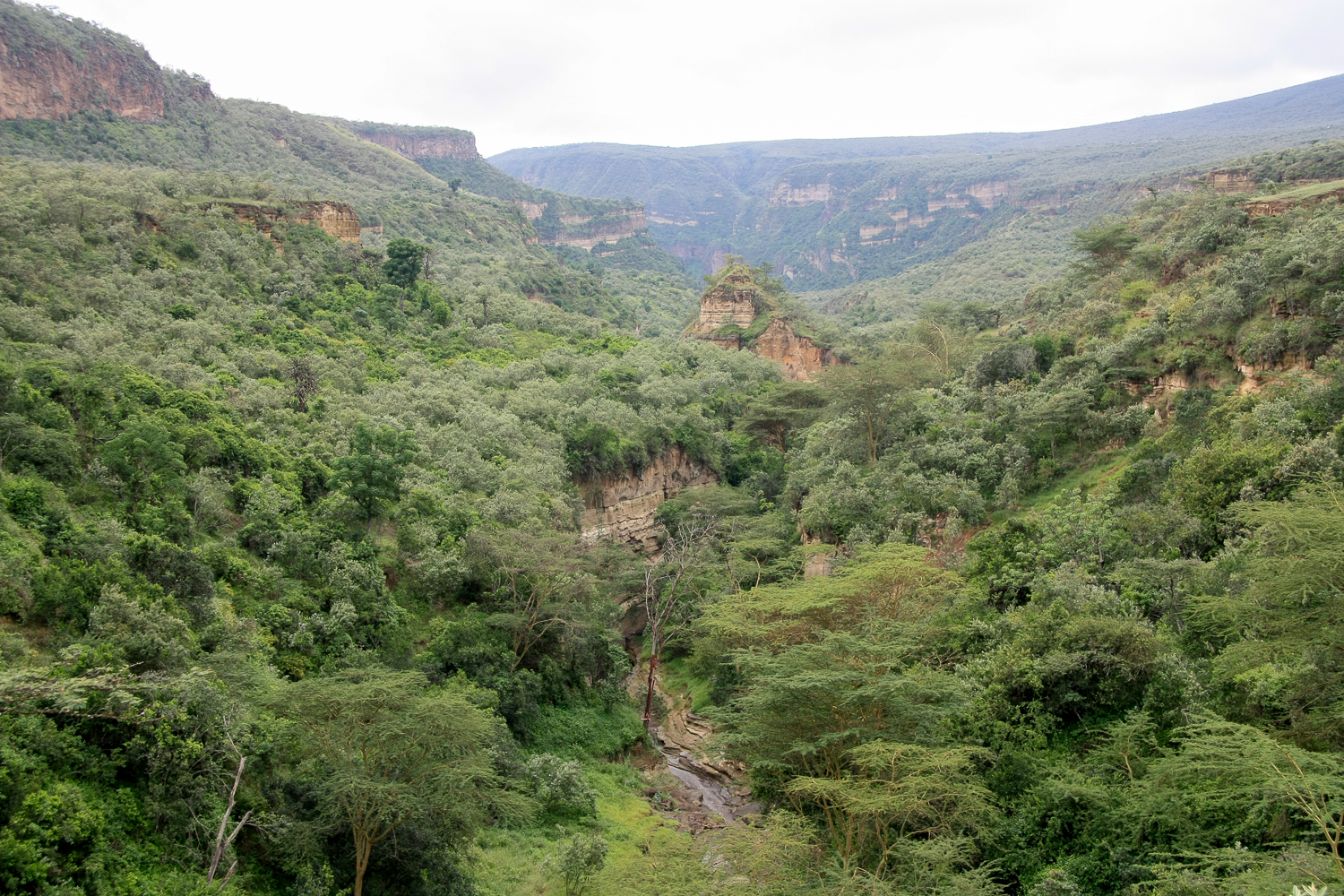 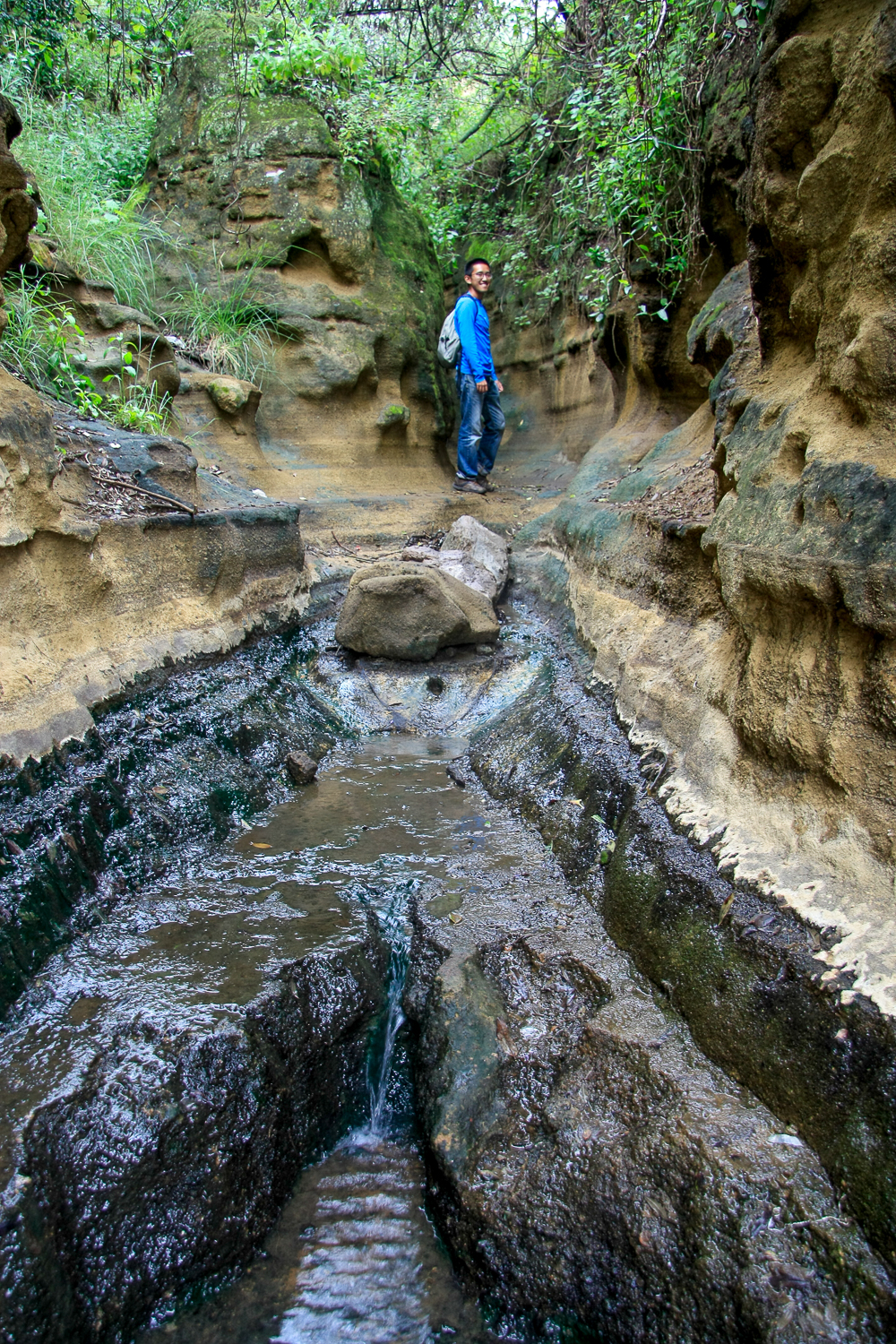