Uganda feels like a mix of both East and West Africa. Unlike in Kenya (let alone Somaliland or Ethiopia, which are entirely different from the rest of East Africa), many people wear colourful, loud prints and traditional clothing. And while Kenyans do it sometimes, Ugandans pepper their speech with the West African-signature high-pitched “ahhh!”, exclaimed approximately whenever we would normally use “wow” or “really?” to express incredulity. It’s addictive. And far more than in Kenya, boda-boda (motorcycle taxi) journeys seem to be the only means to get to some places in a timely manner, and also vastly outnumber cars — not unlike the zemidjans of Togo and Benin. Add on some dusty roads, plus my dusttrap hair, and long boda-boda rides are guaranteed to turn me reddish-brown from head to toe. No use washing my clothes if I have to repeat the journey again the next day…

Inter-town transport is a beast in and of itself, topping West Africa in both the over-the-top and hazardous departments. I was on a bus where a sex scandal (to use the term fellow passengers were calling it) emerged: a man and woman met for the first time, started flirting, and then she asked about his sexual history in front of all the passengers. The bus erupted into raucous laughter and made fun of the duo for hours after. The bus, speeding like all the other ones, also sideswiped a semi speeding on a twisty mountain curve, breaking a window near the back. And to top it all off, I had the most uncomfortable ride of my life, topping the one I had in Togo: in a sedan meant for five, we stuffed in *nine*: five in the back, two in the passenger’s seat, and two in the driver’s seat. (At least the driver-side passenger didn’t have to share driving duties like the one in Togo had to; the original driver just reached over the passenger’s legs to shift gears.) I sat on a seatbelt buckle for two hours. At least the view was nice, but I couldn’t even free my camera from my bag. No leg room, and no arm room either. Hooray for being alive, but I’ve grown so used to these standards that I’ve stopped being surprised or scared for my life. Just another day.

It’s with these methods of transport that I’ve been visiting the volcanic lakes of Uganda, and it’s totally worth the trouble. 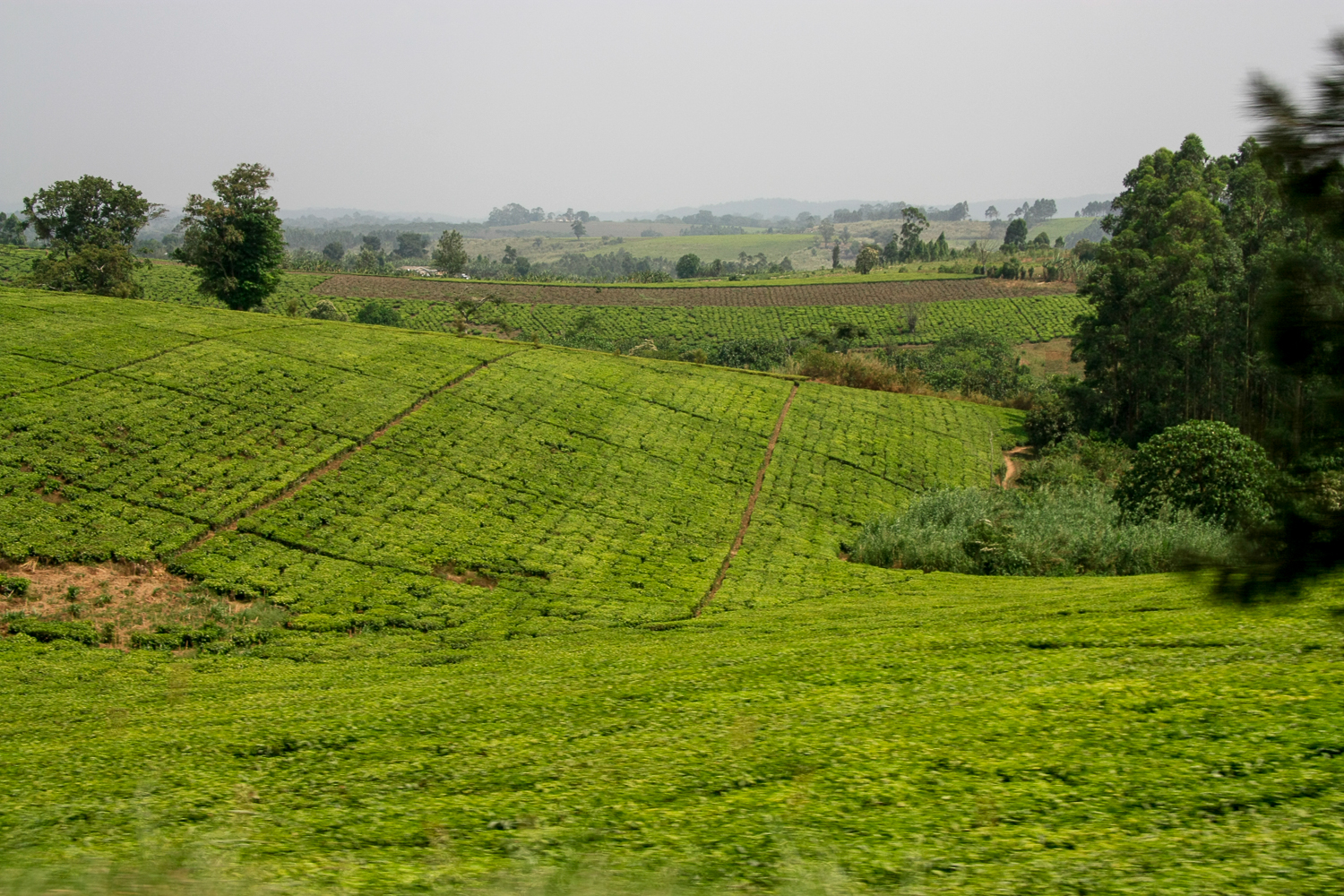 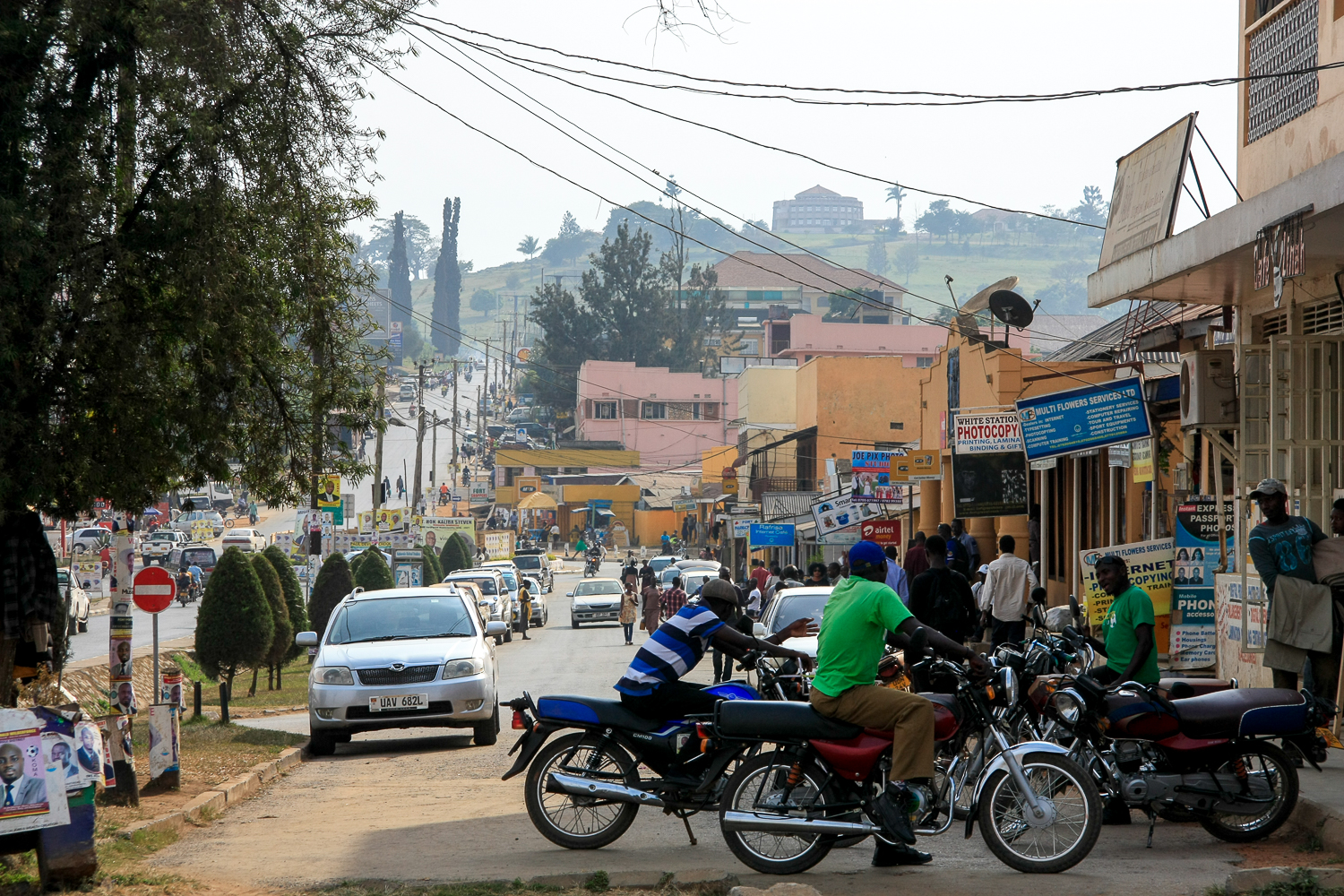 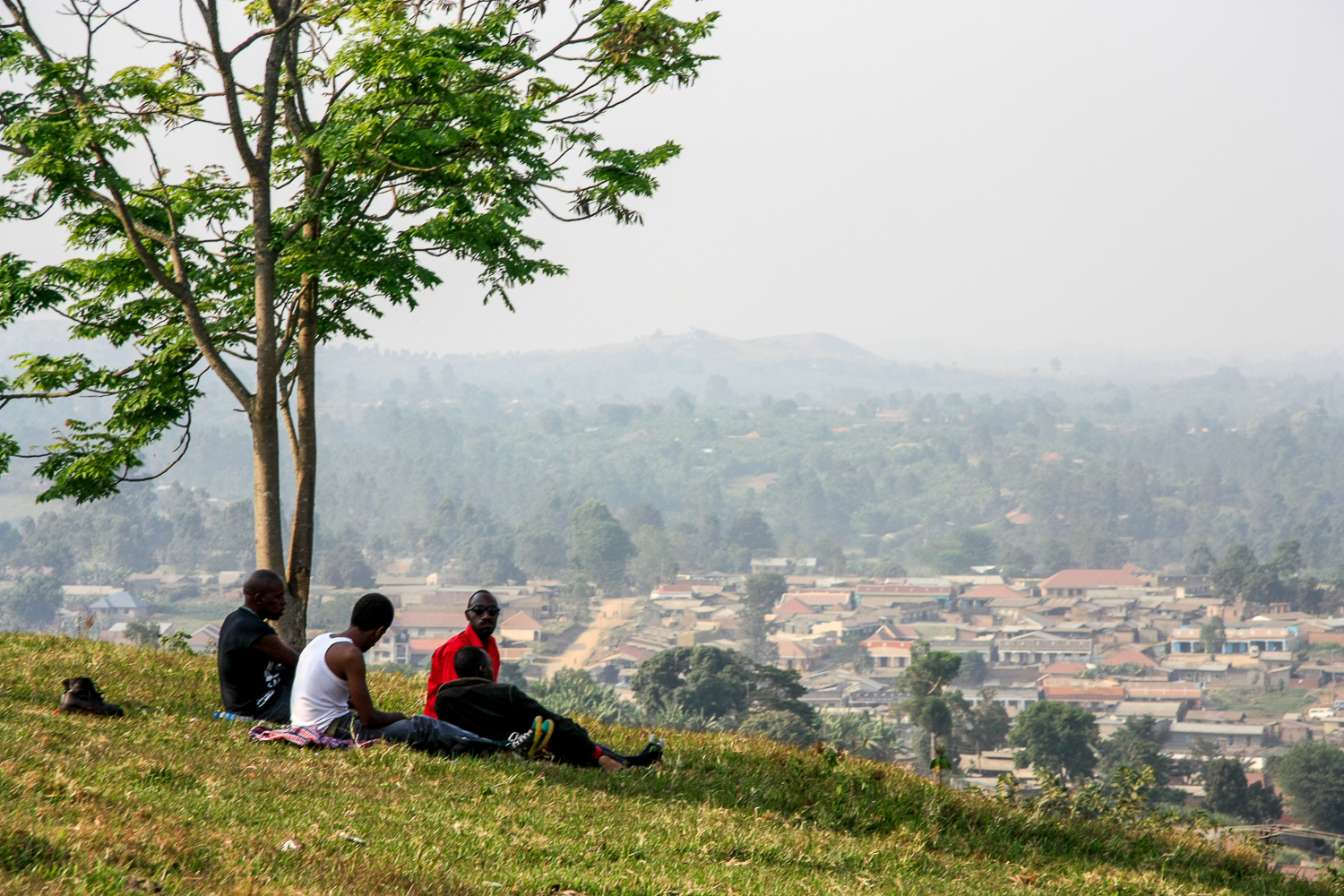 Fort Portal is a town, surrounded by tea plantations just outside, with a beautiful backdrop of the Rwenzori mountains. Unfortunately, the dry season meant that the road dust and pollution lingered in the air, obscuring the view almost completely. While that was a bit of a pity, I made daytrips to lakes Kyaninga (for most regions of Uganda, “ky” and “ki” are pronounced like “ch” in English), Nkuruba, and Nyinambuga, the latter of which is on the 20,000 shilling ($6) note. These are just a mere three of the many Crater Lakes of western Uganda, formed by volcanoes. It was wonderful to walk around the edge of each crater, peering down to a steep slope and lake below. Kyaninga’s surrounding hills were covered in farmland with lots of friendly-curious villagers working in the fields who would literally stop and stare at me until I went out of sight, Nkuruba’s small crater was practically a monkey paradise of a rainforest, and Nyinambuga was the site of an exclusive and beautiful lodge, where I had a classy (albeit expensive!) lunch overlooking crater lakes on either side. 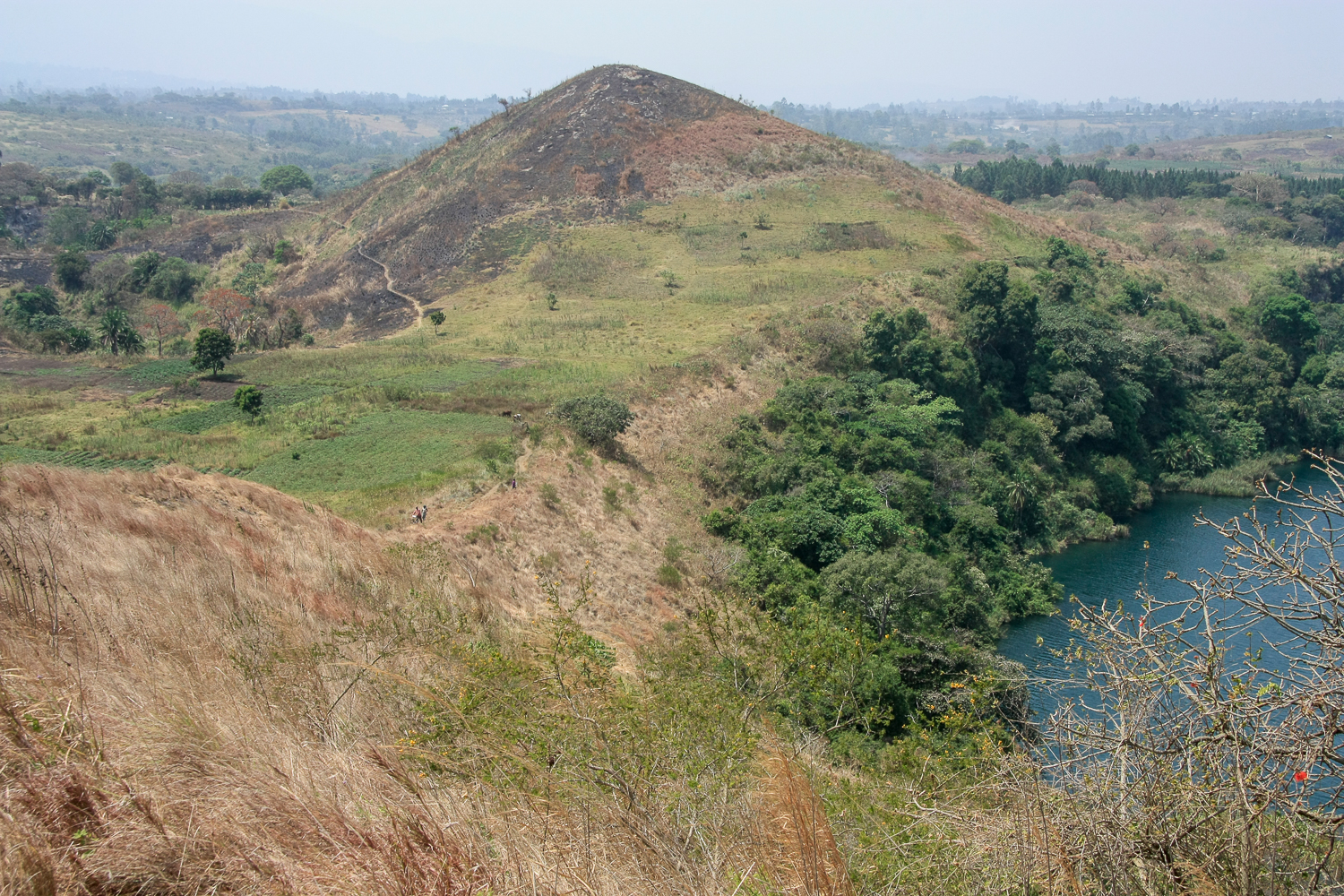 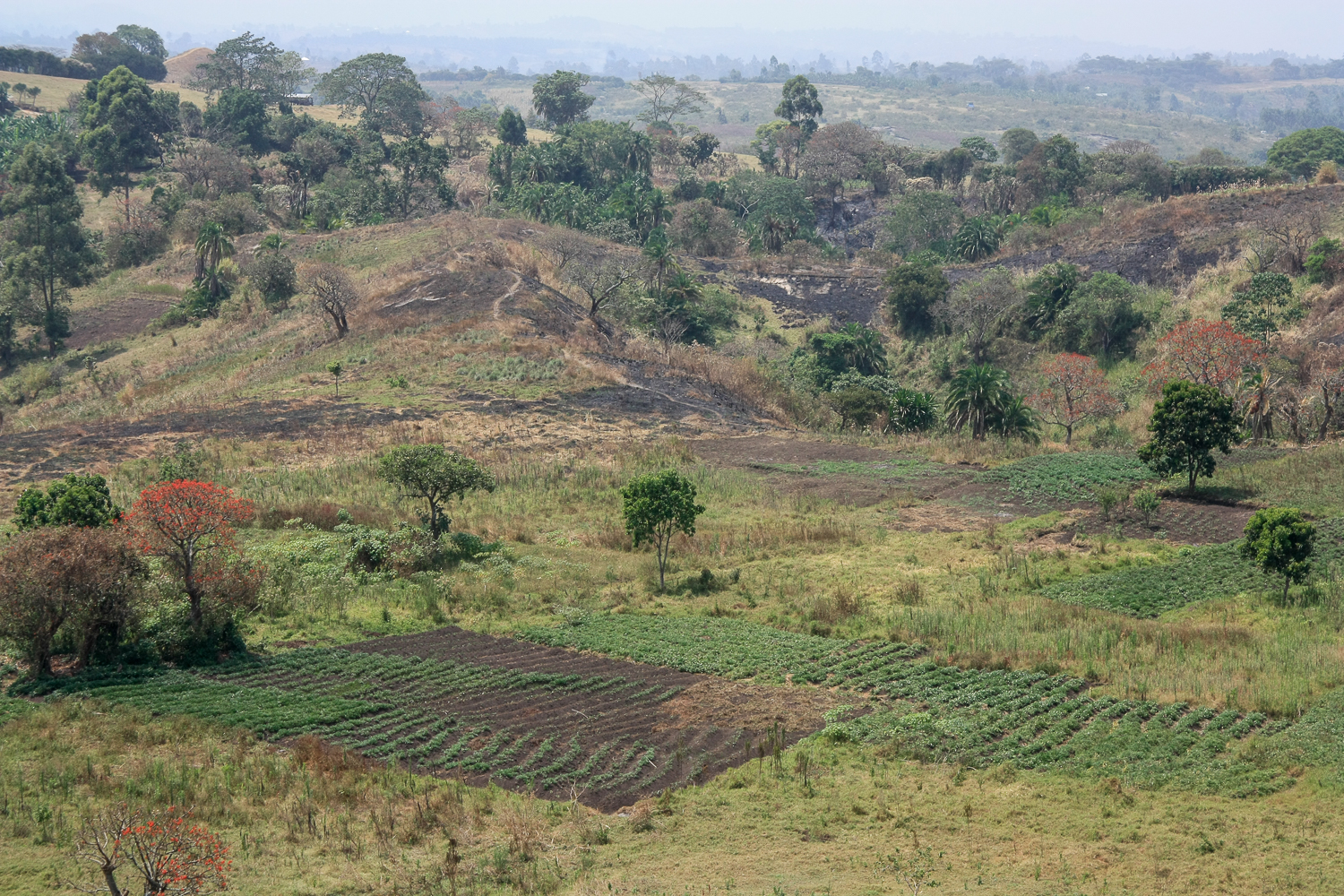 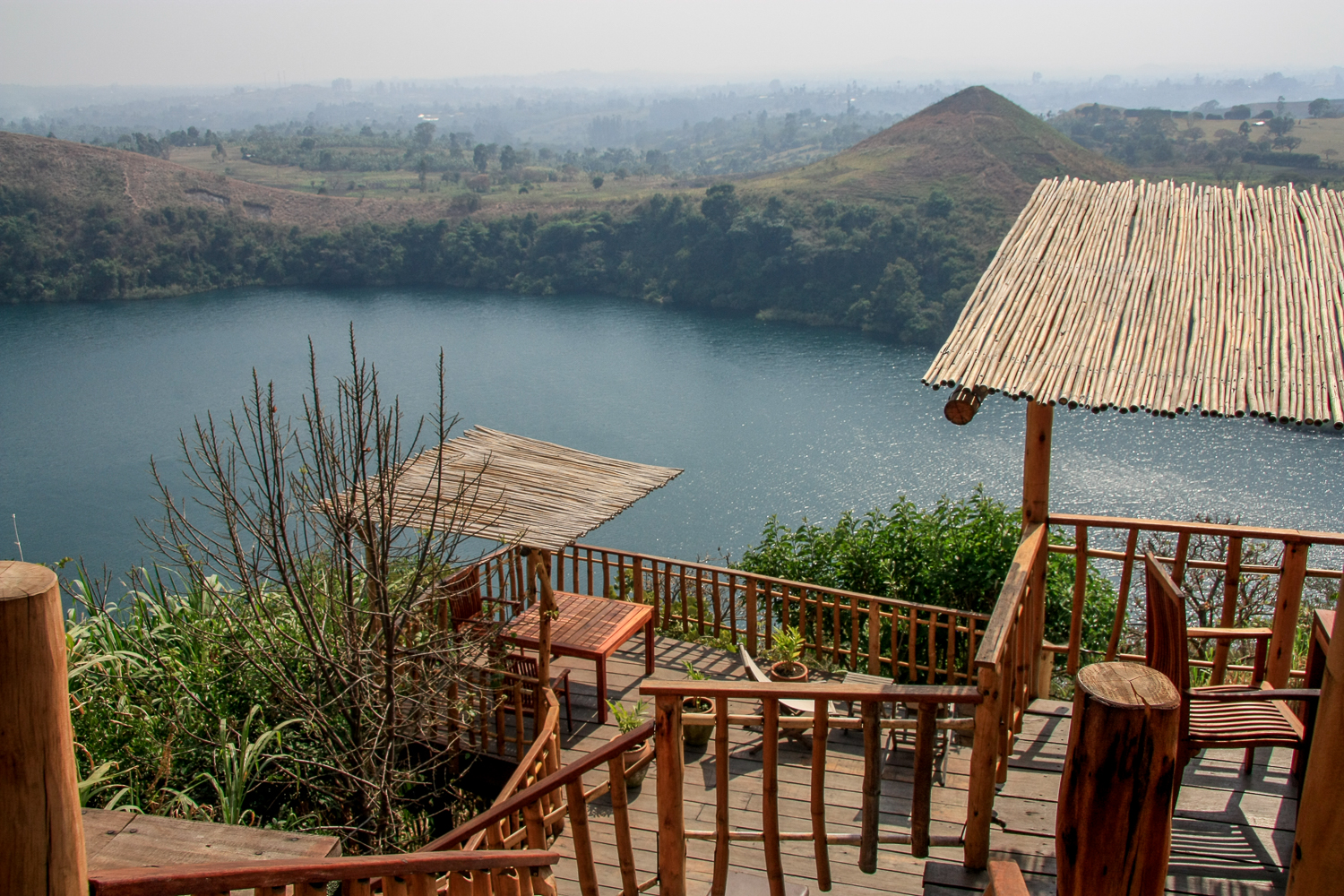 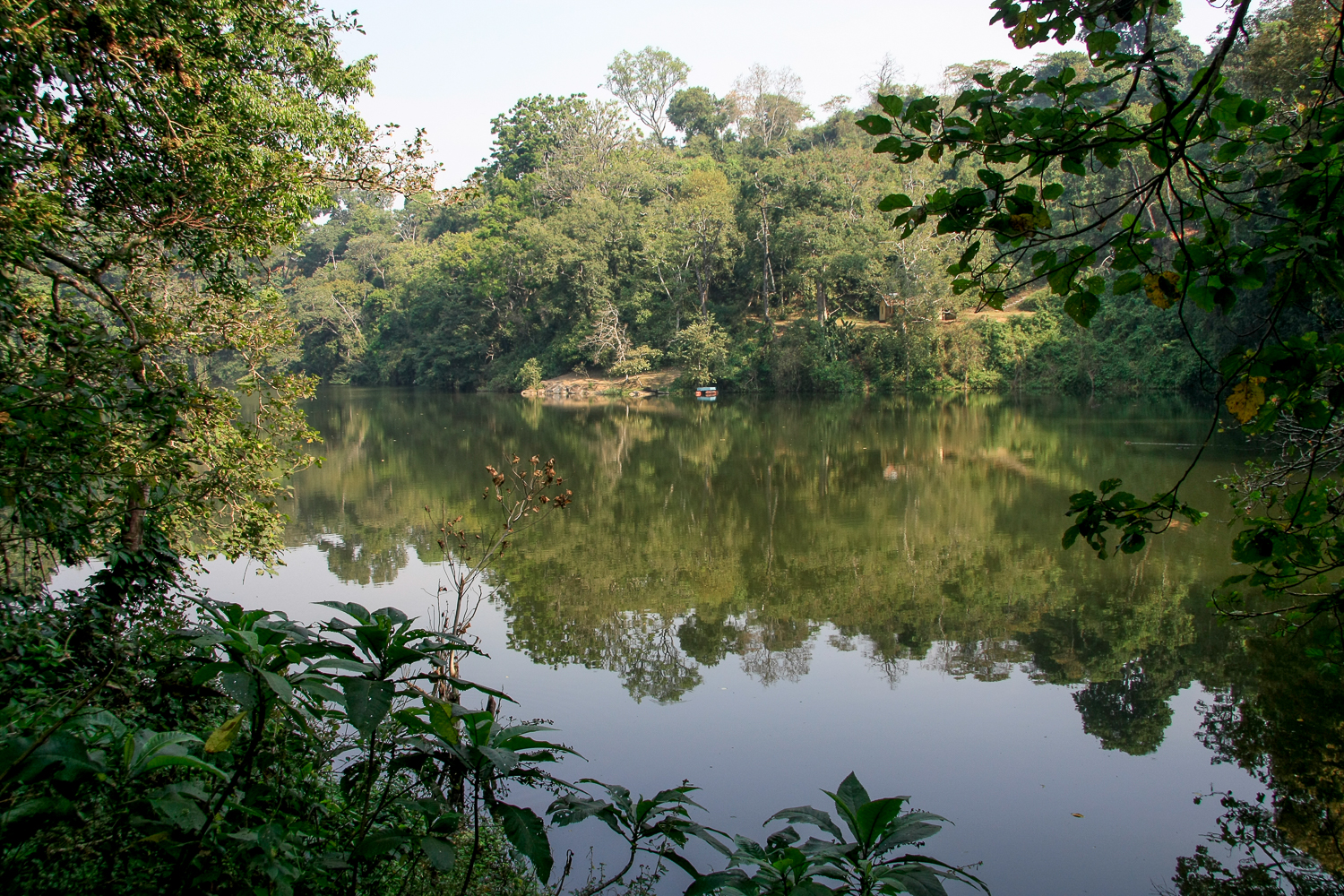 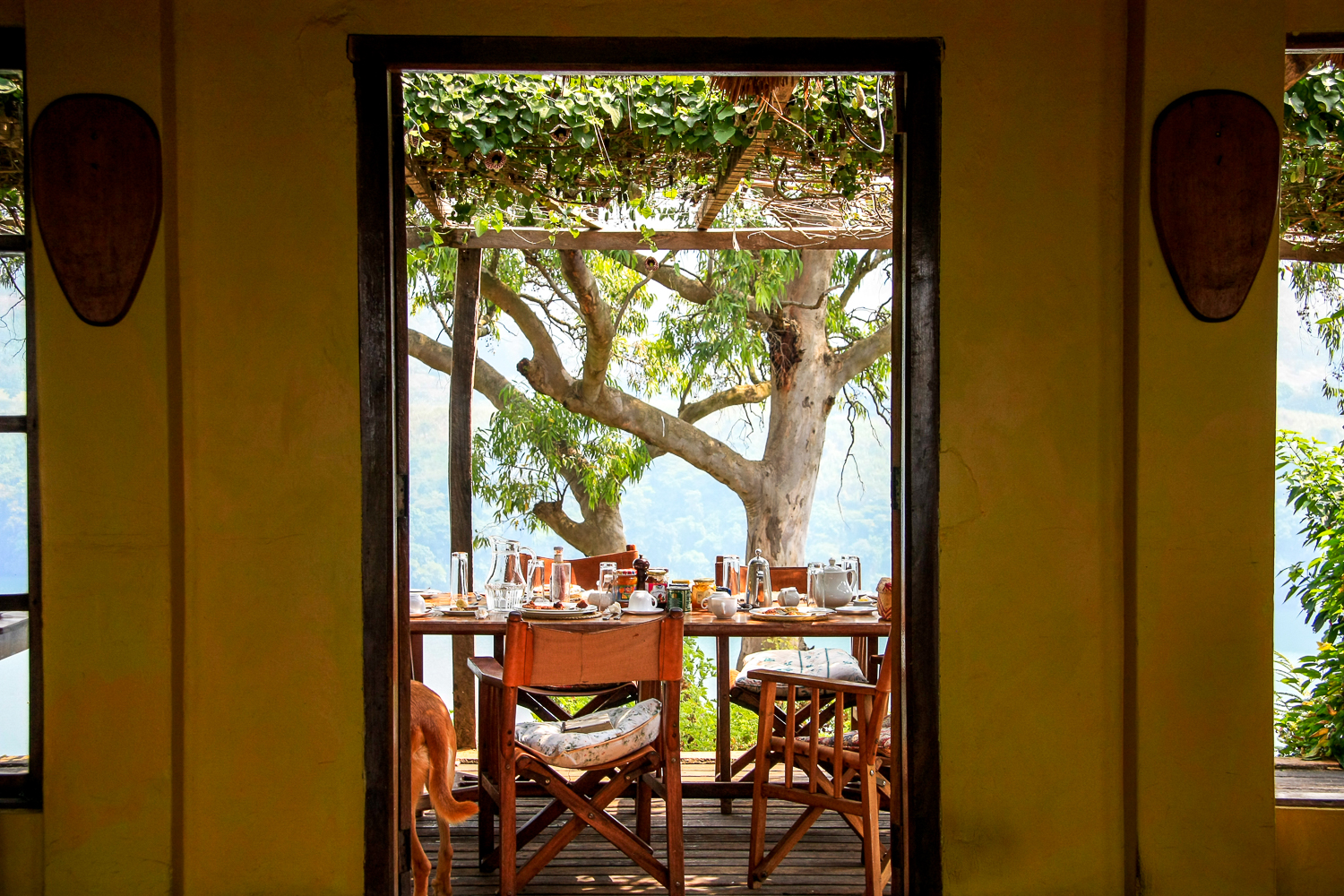 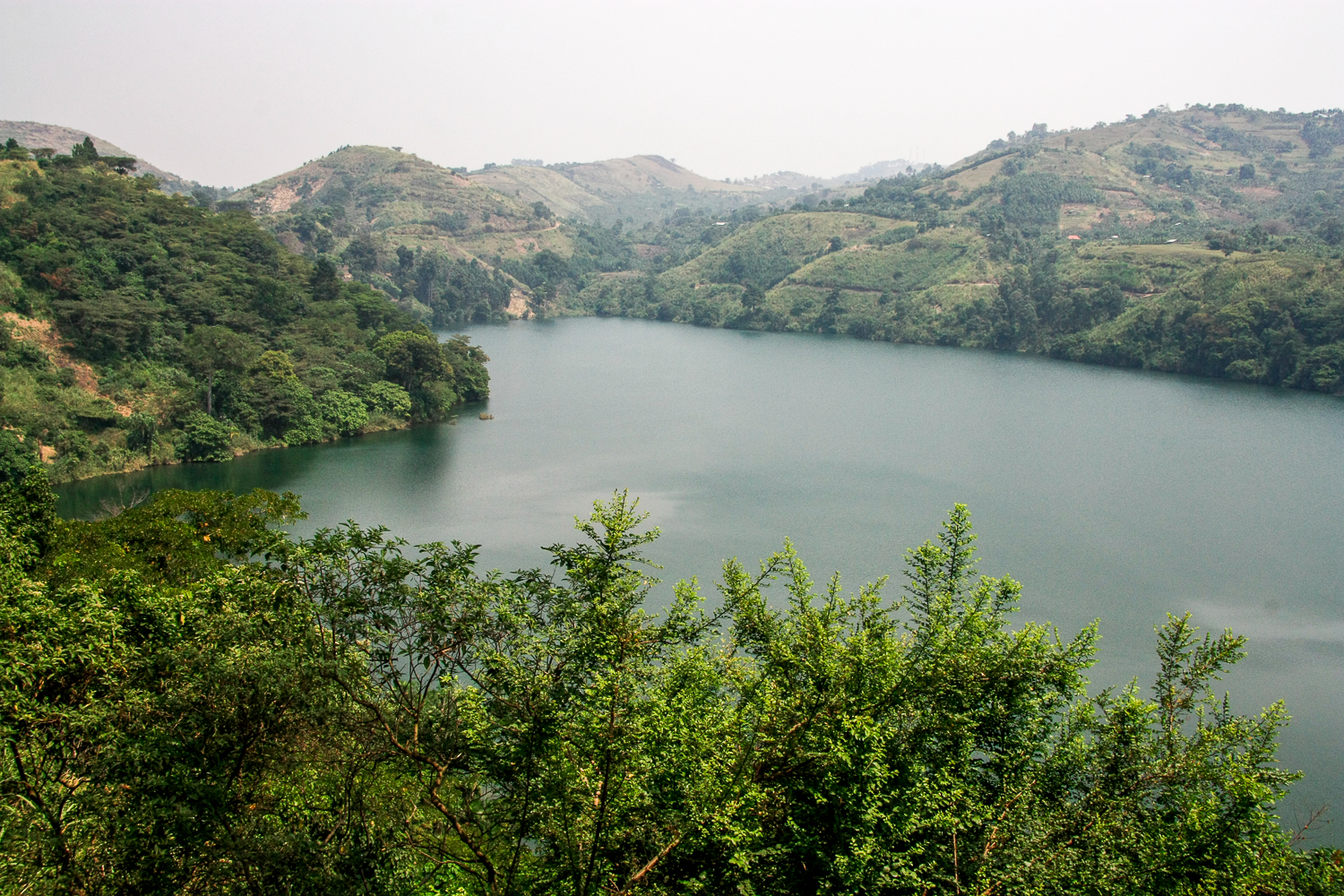 On my dusty journey back from Nyinambuga to Fort Portal, I made a little pit stop in the village of Rwaihamba, walking around the beautifully chaotic but tiny Friday market, to the bemusement of the locals. 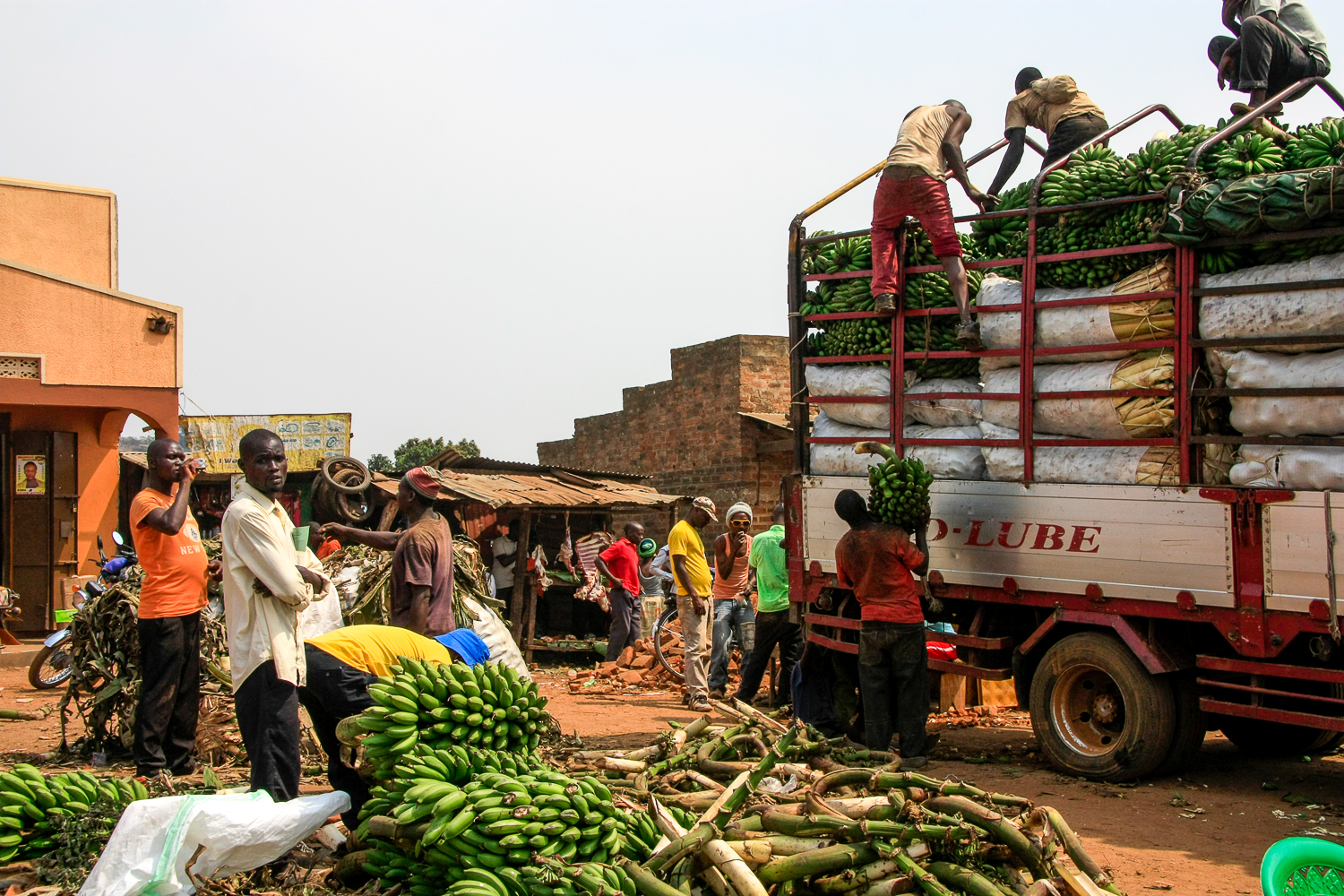 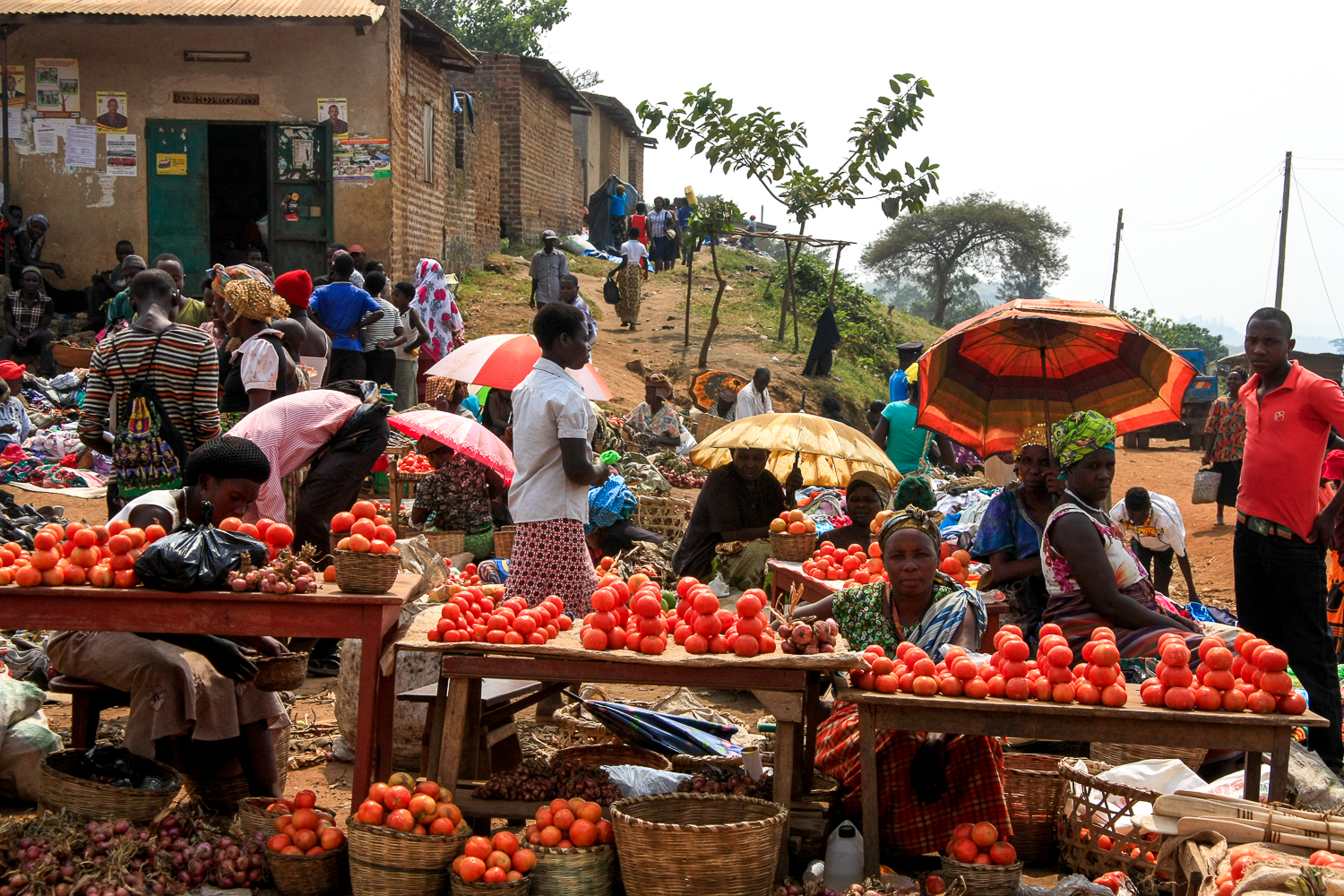 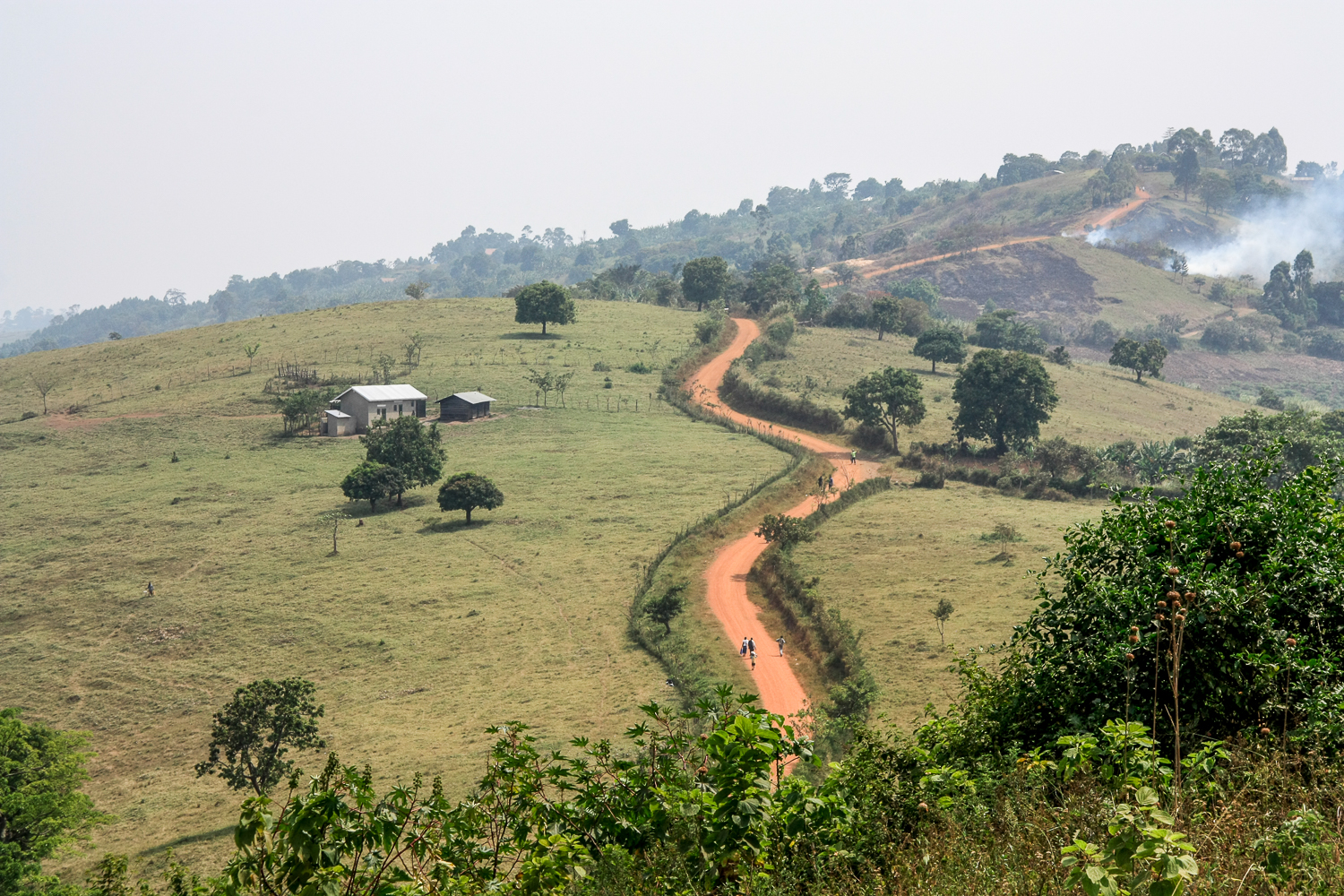 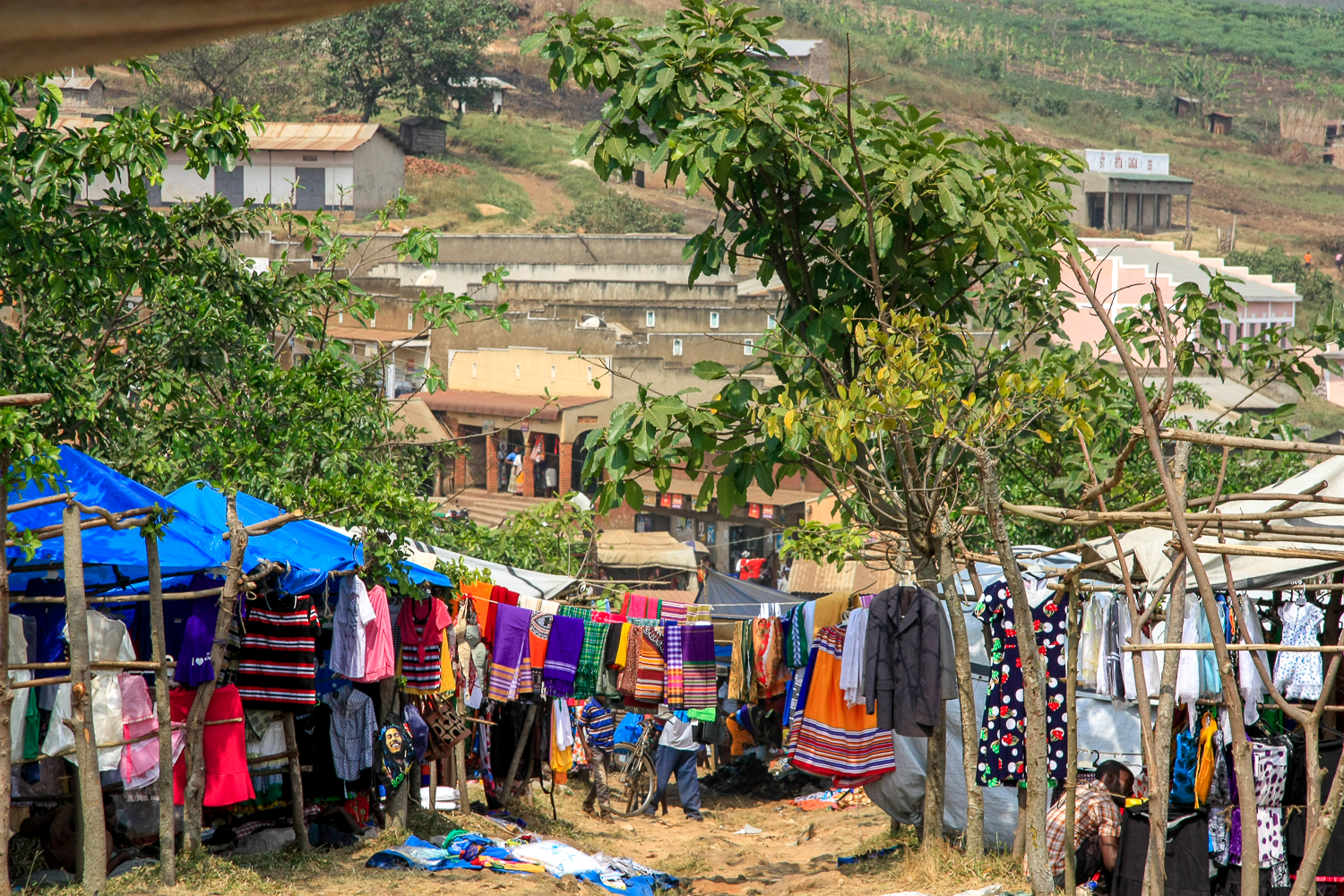 Fast forward a few days to Lake Bunyonyi, out of the chain of crater lakes but still volcanic, formed after an eruption closed off the outlet of a river. Possibly the prettiest place I’ve seen in Uganda, it’s the second-deepest lake in the world, 900m at its deepest! To sustain themselves, locals introduced tilapia and crayfish into the waters, which have flourished… and are also very delicious. The steep hills are terraced, dotted with houses and small villages, and certainly a tough climb for all the residents — I can’t imagine walking up or down like they do multiple times per day, let alone in the rainy season! The ground was dry and yet I nearly slipped a couple of times. Locals also criss-cross the lake frequently in their dugout canoes — hollowed-out trees. It makes for a beautiful, serene sight, although I imagine it must get quite tiring for them to paddle such long distances. It was also election time — some of them had to paddle far to their polling stations. 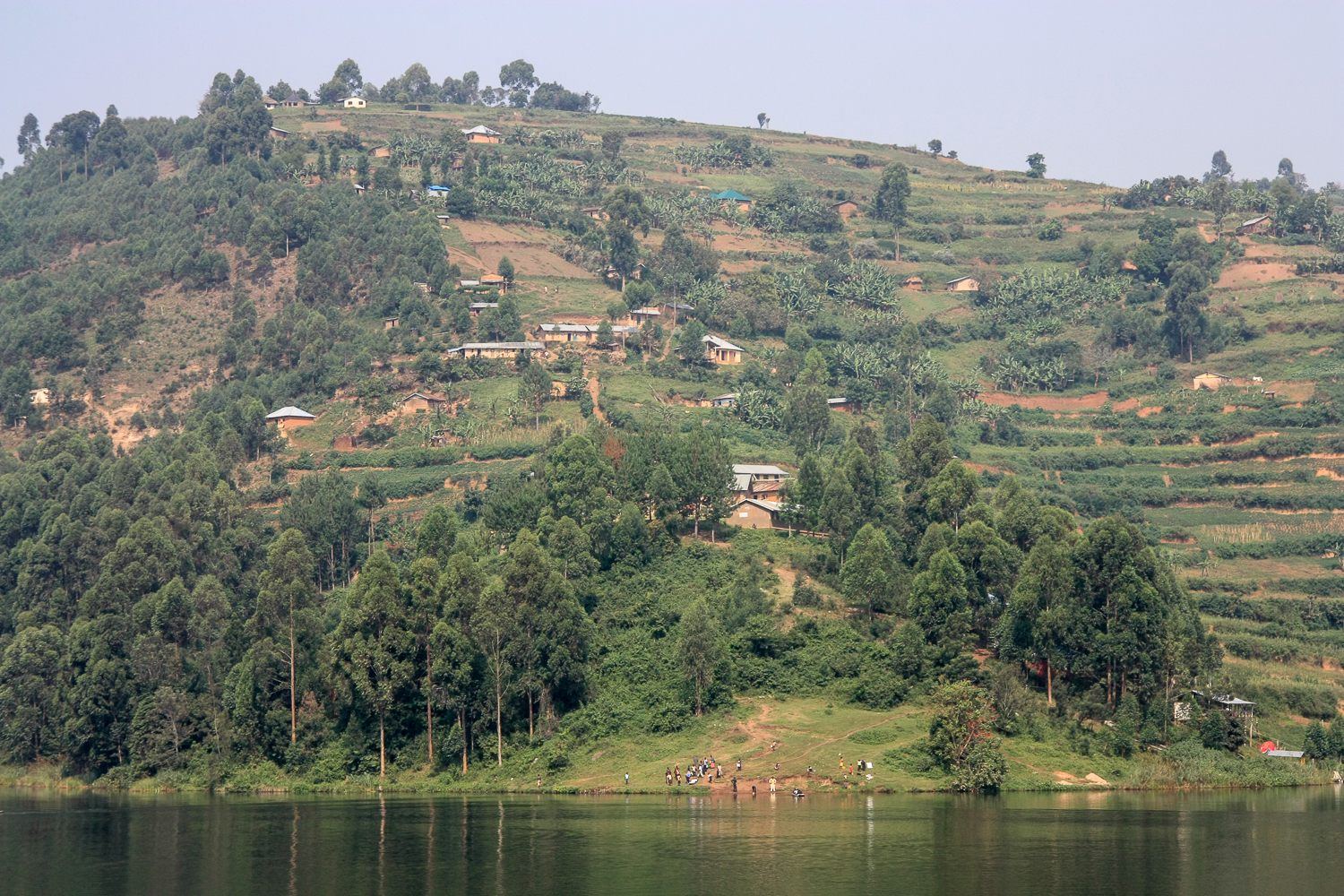 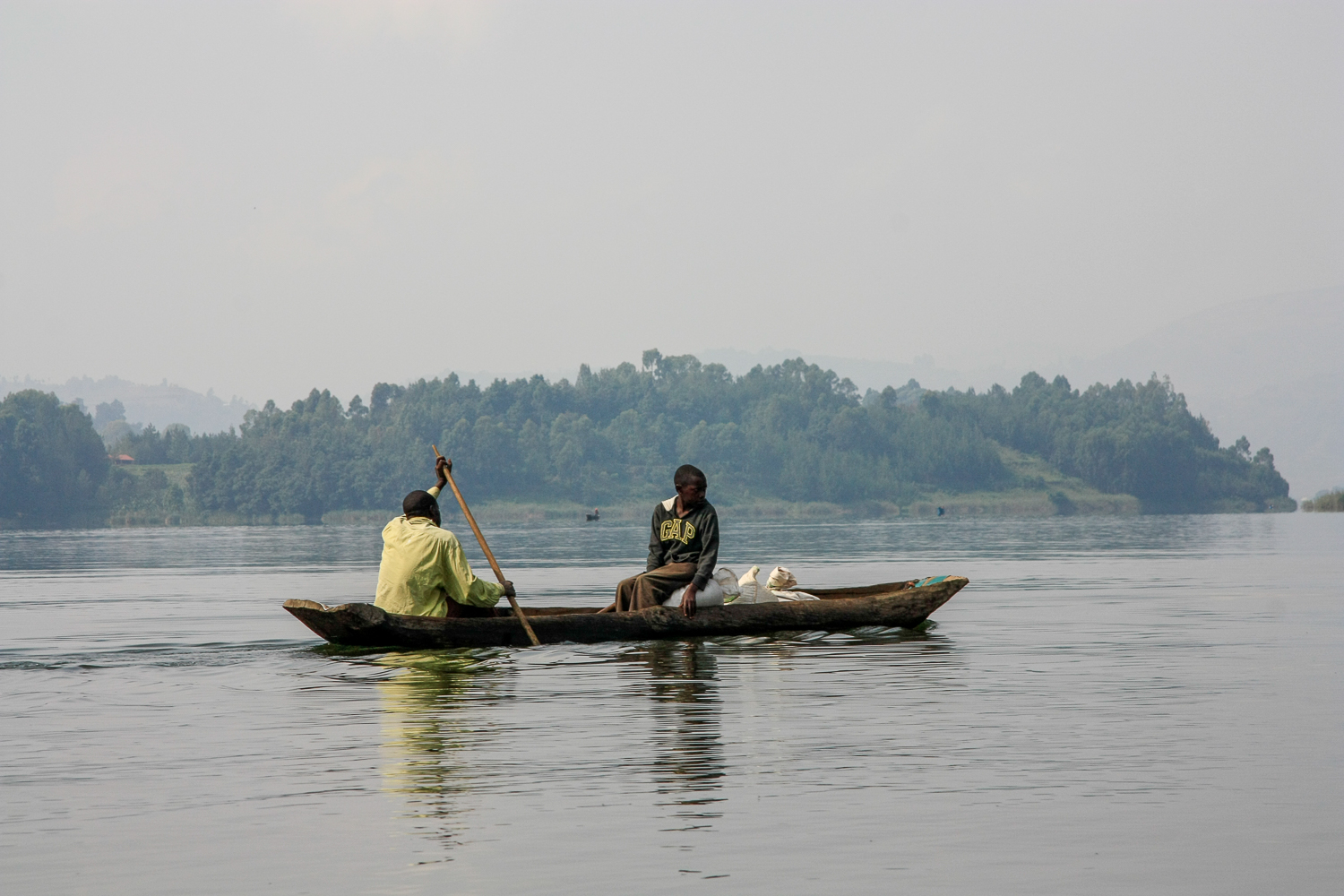 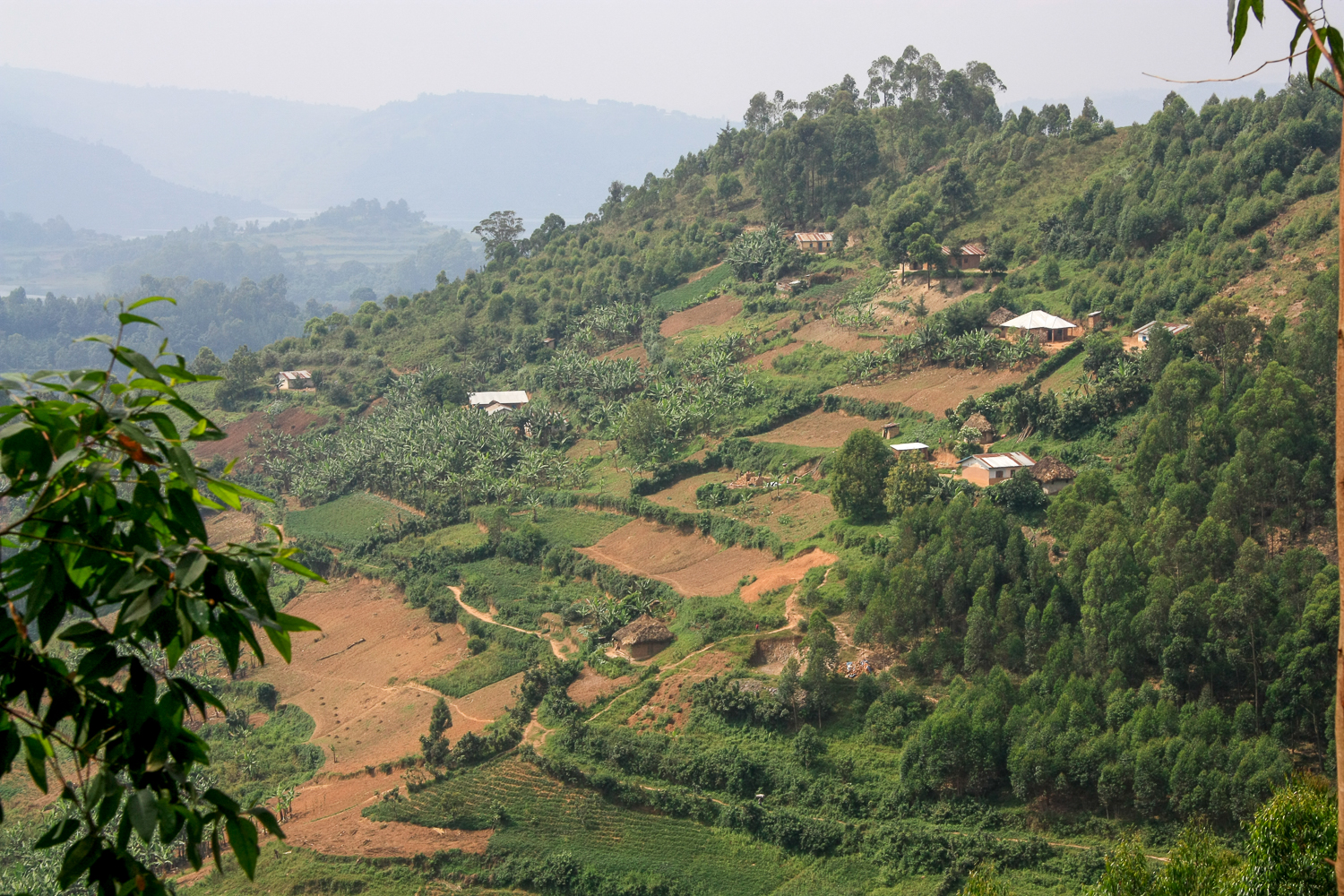 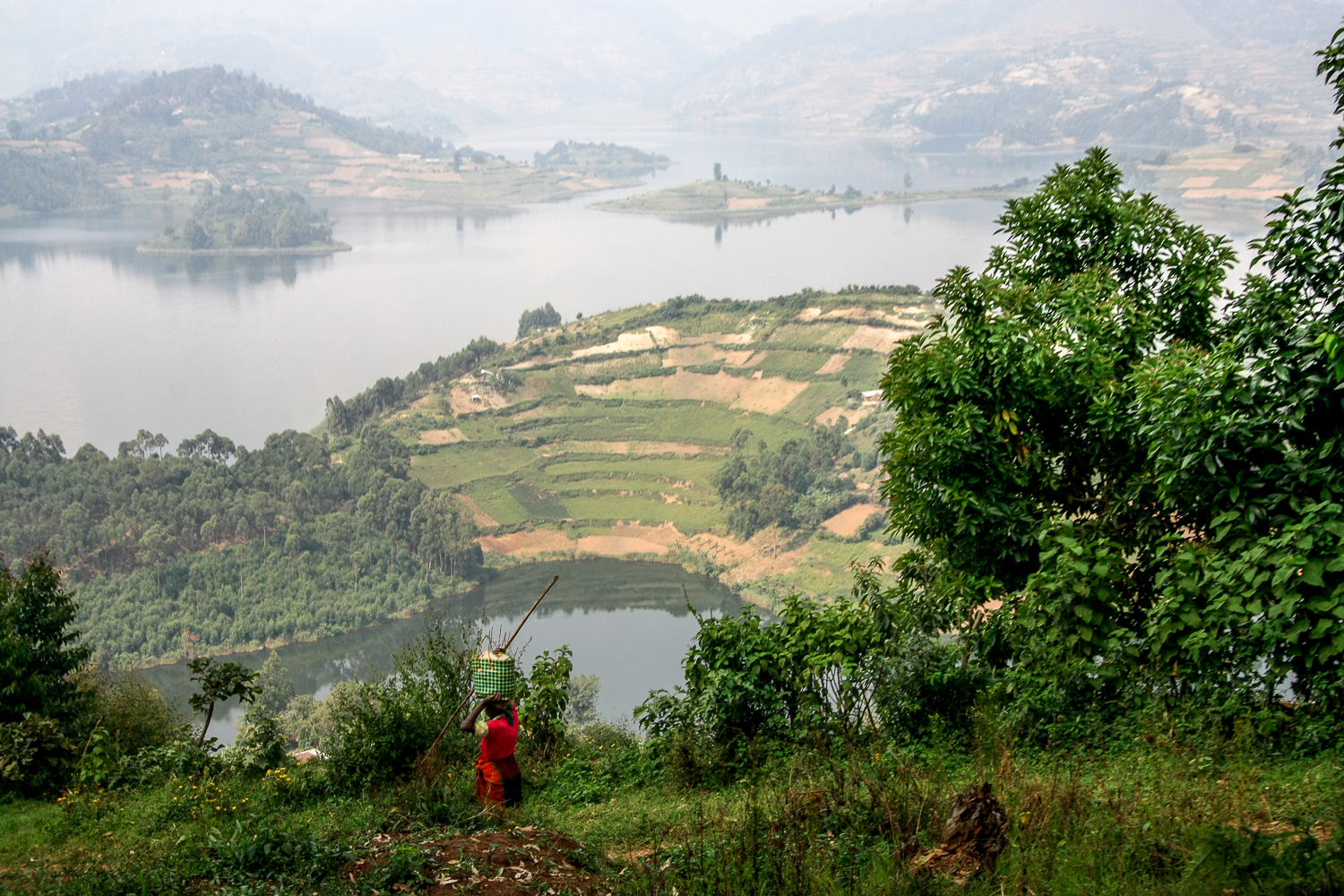 With the remoteness of some of the settlements, it’s unfortunately quite difficult for some of them to get care. I saw a lady carried on a stretcher down one of the very steep hills and into a dugout canoe. She’s a lucky one — some villages don’t have such help. With health clinics located on few (if more than one…) of the 29 islands and maybe on some of the mainland slopes, it’s tough to reach help. Even if you’re on the right piece of land, it’s often an extremely steep walk up or down for several kilometres, something unsuitable for the elderly and infirm, and oftentimes the doctor isn’t present in the clinic. Yikes. I saw the presence of some foreign volunteers looking to improve and increase access to care. 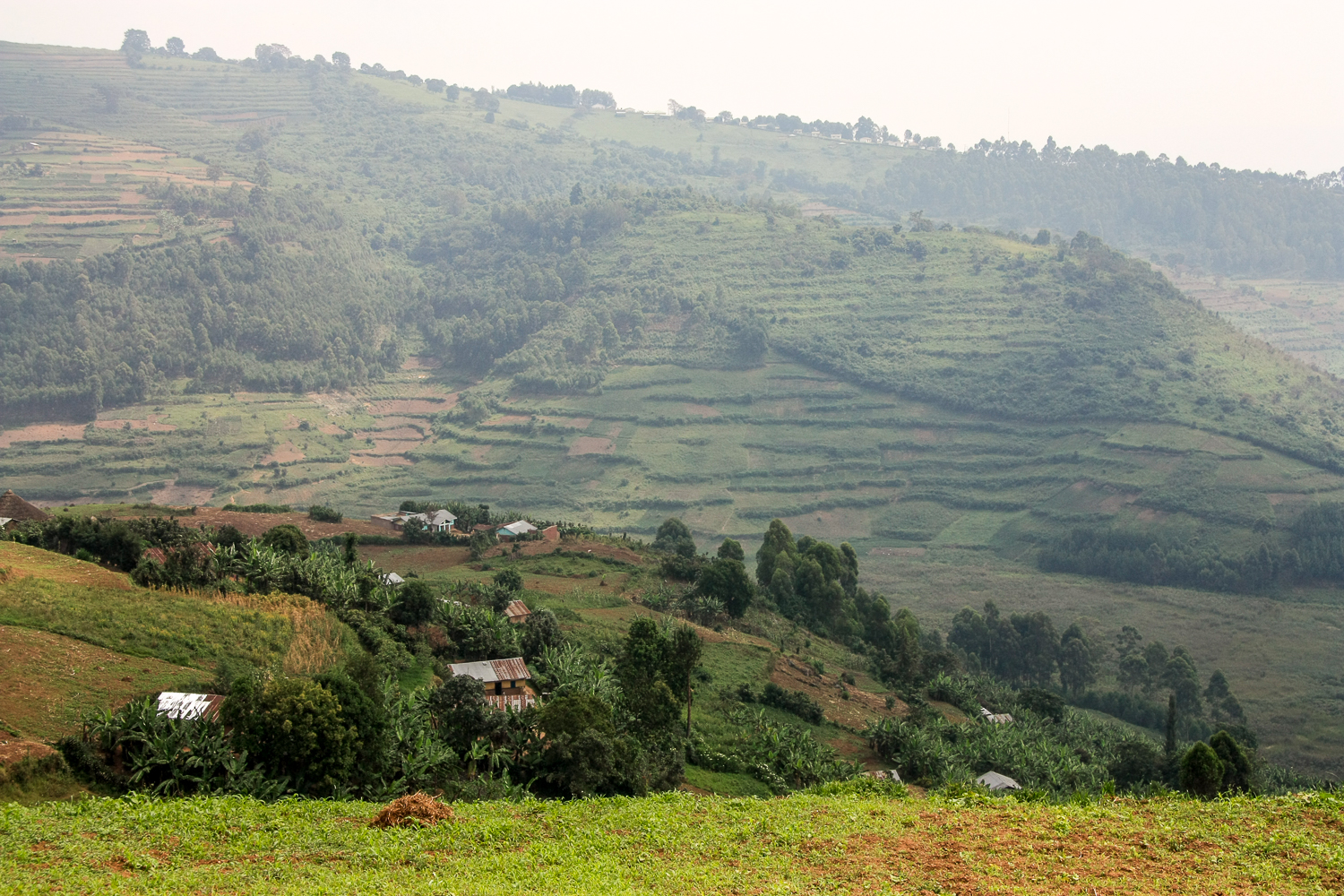 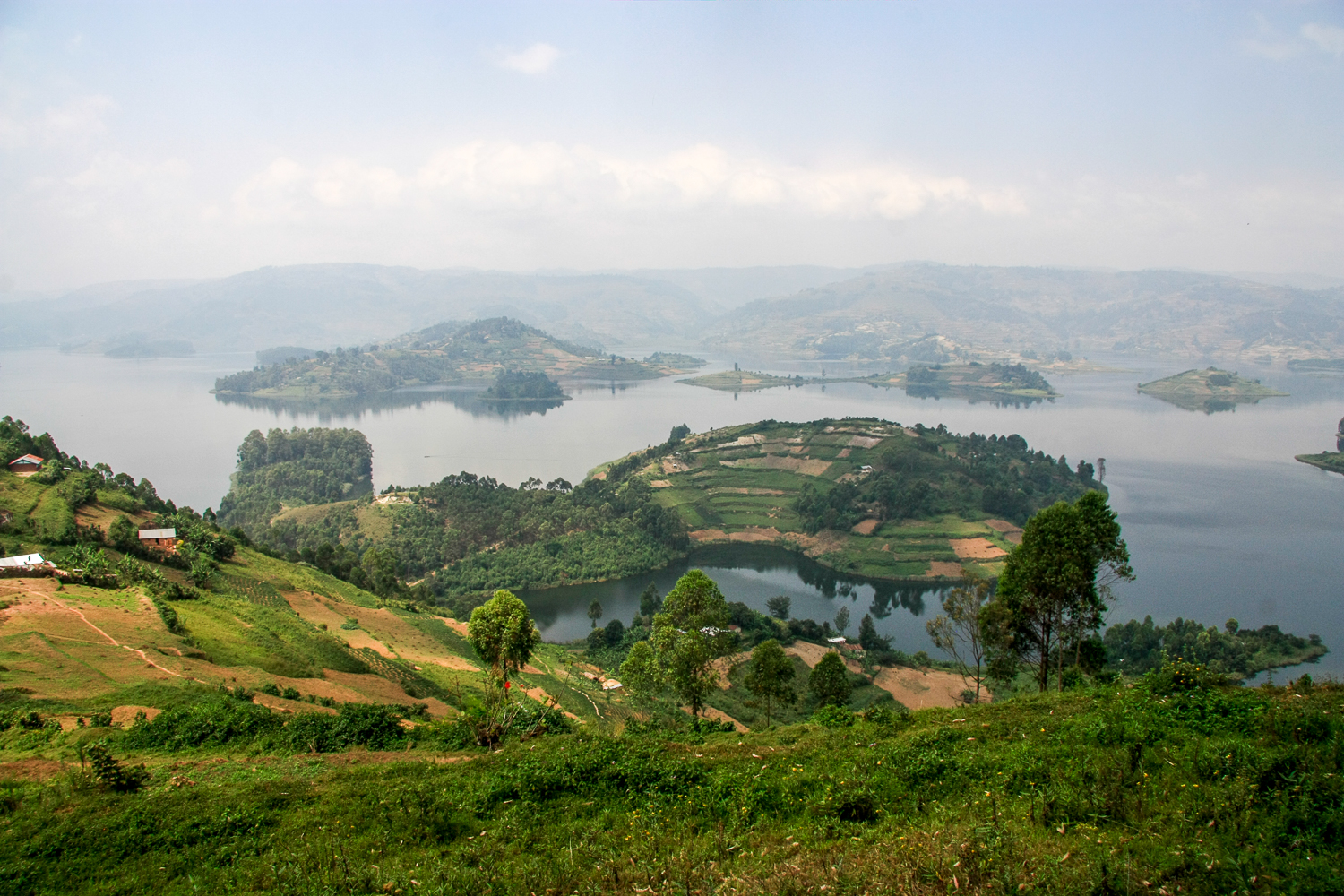 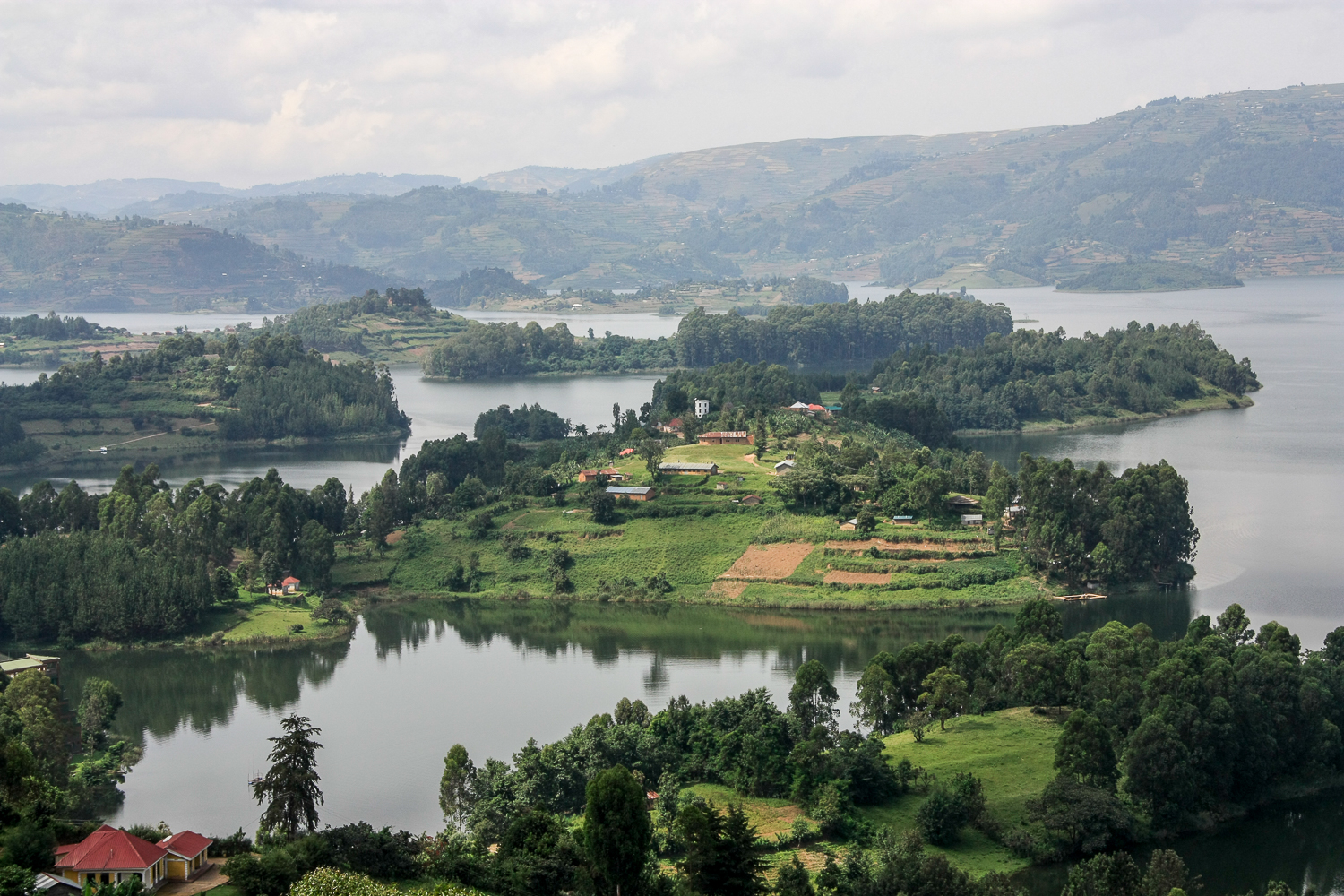 I met two UN volunteers for South Sudan, Andrea and Fran, who invited me along for a motorboat ride on the lake. Passing by private lodges and even a former leper colony now turned secondary boarding school and health clinic, of particular interest was a tiny island, overgrown with tall grass and with one sole tree in the middle. Called Punishment Island, it was the place where villages used to dump their pregnant unmarried daughters to die. (The also-unmarried men who impregnated them? Scot-free. Sigh.) There’s no food on the island either. Many of the women attempted to swim somewhere — those who couldn’t drowned or died of starvation, those who did were occasionally discovered by villagers who would either dump them there again or kill them somehow. Their only means of escape was through poor fishermen who couldn’t afford the dowry price for a “regular” bride and would elope with a Punishment Island resident. This horrific practice was still in place until the 1940s, when two parents found their daughter pregnant and had her brother throw her off a waterfall. She pulled him down with her… and *then* the parents mourned. Wow. Well past this history now, residents of the lake area now survive on agriculture and tourism, and Punishment Island is just a local landmark filled with resident cormorants. There’s still a ways to go for many girls though, as they are often pressured to marry young and thus drop out of school. I met more foreign volunteers working to close the gender gap. 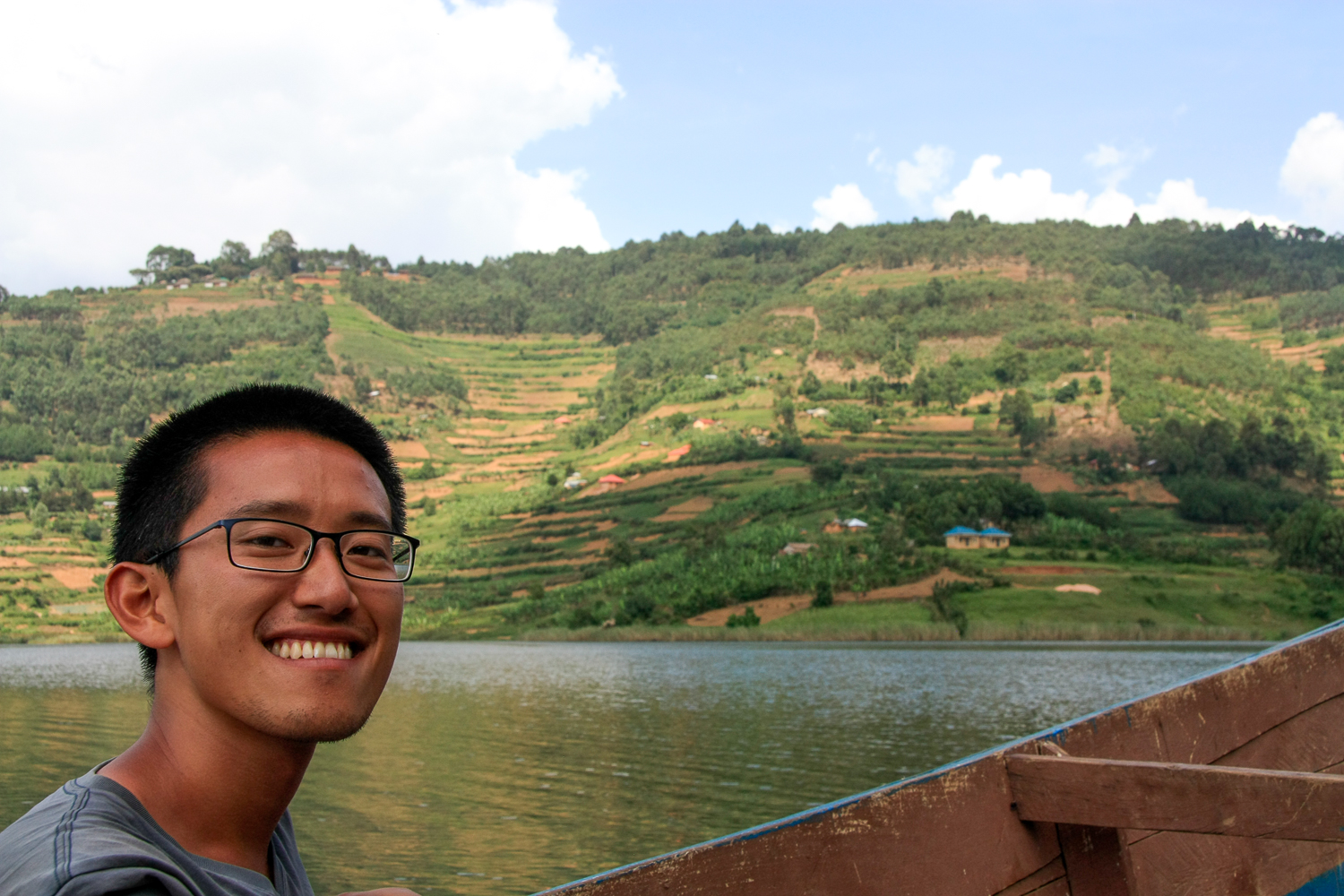 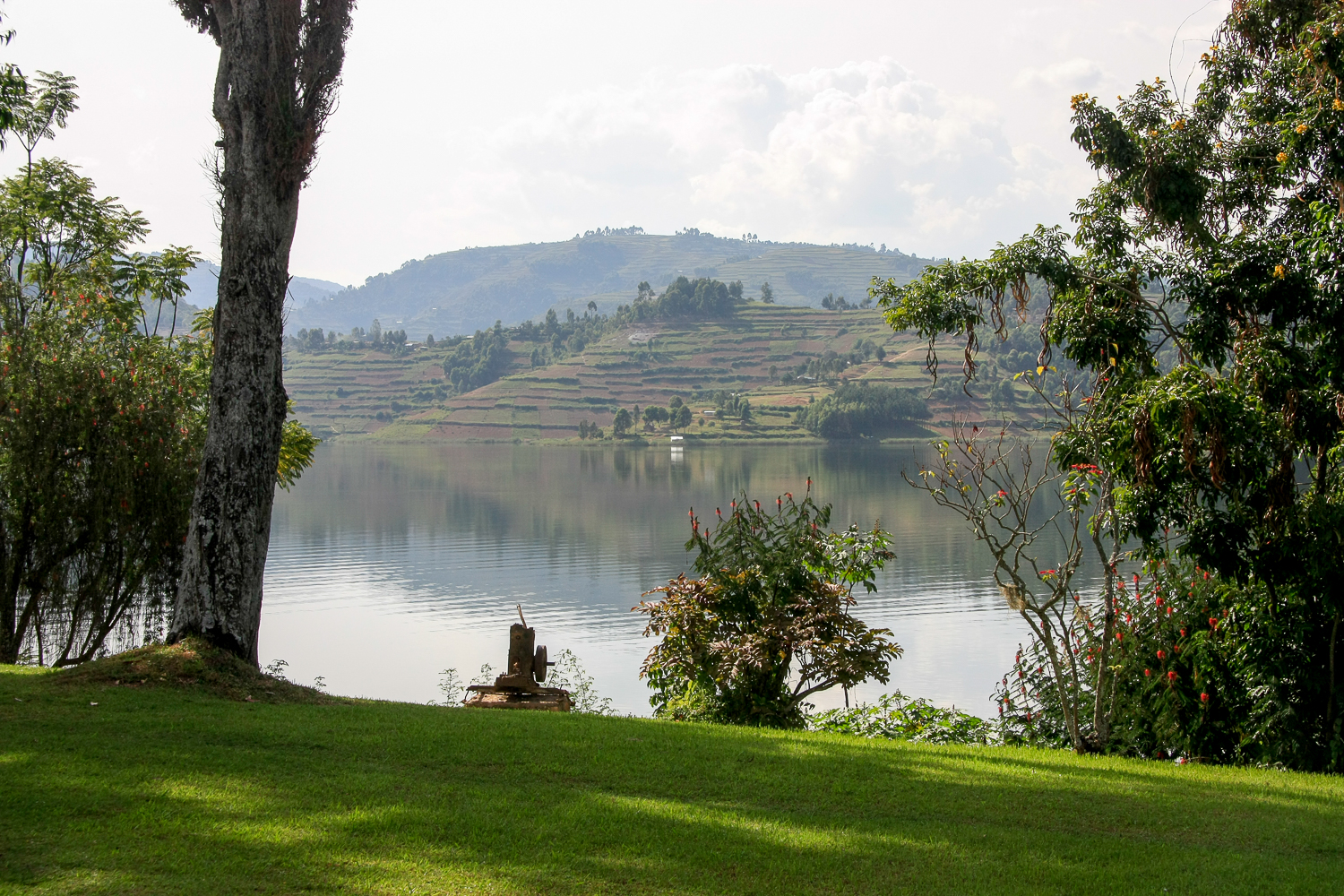 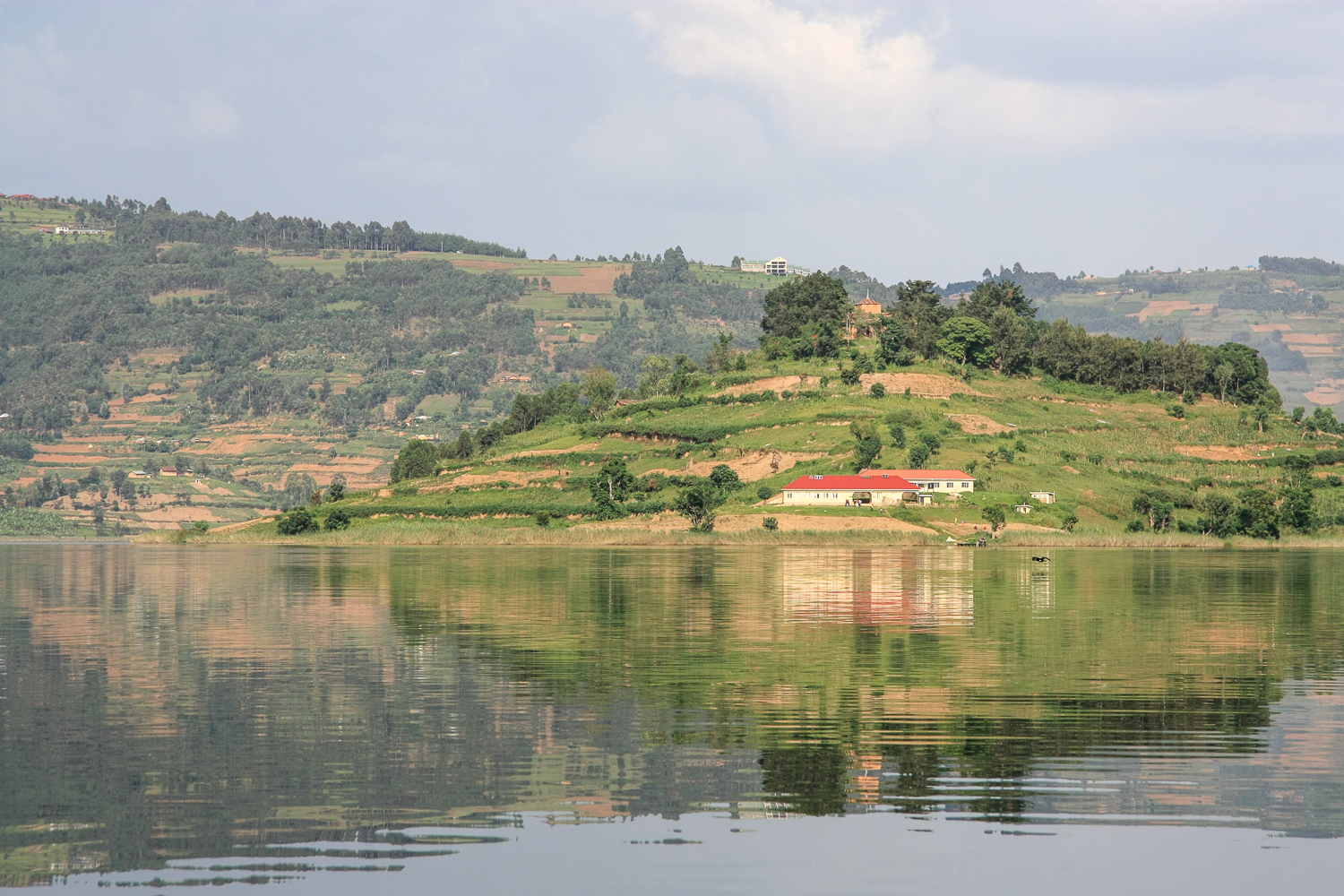 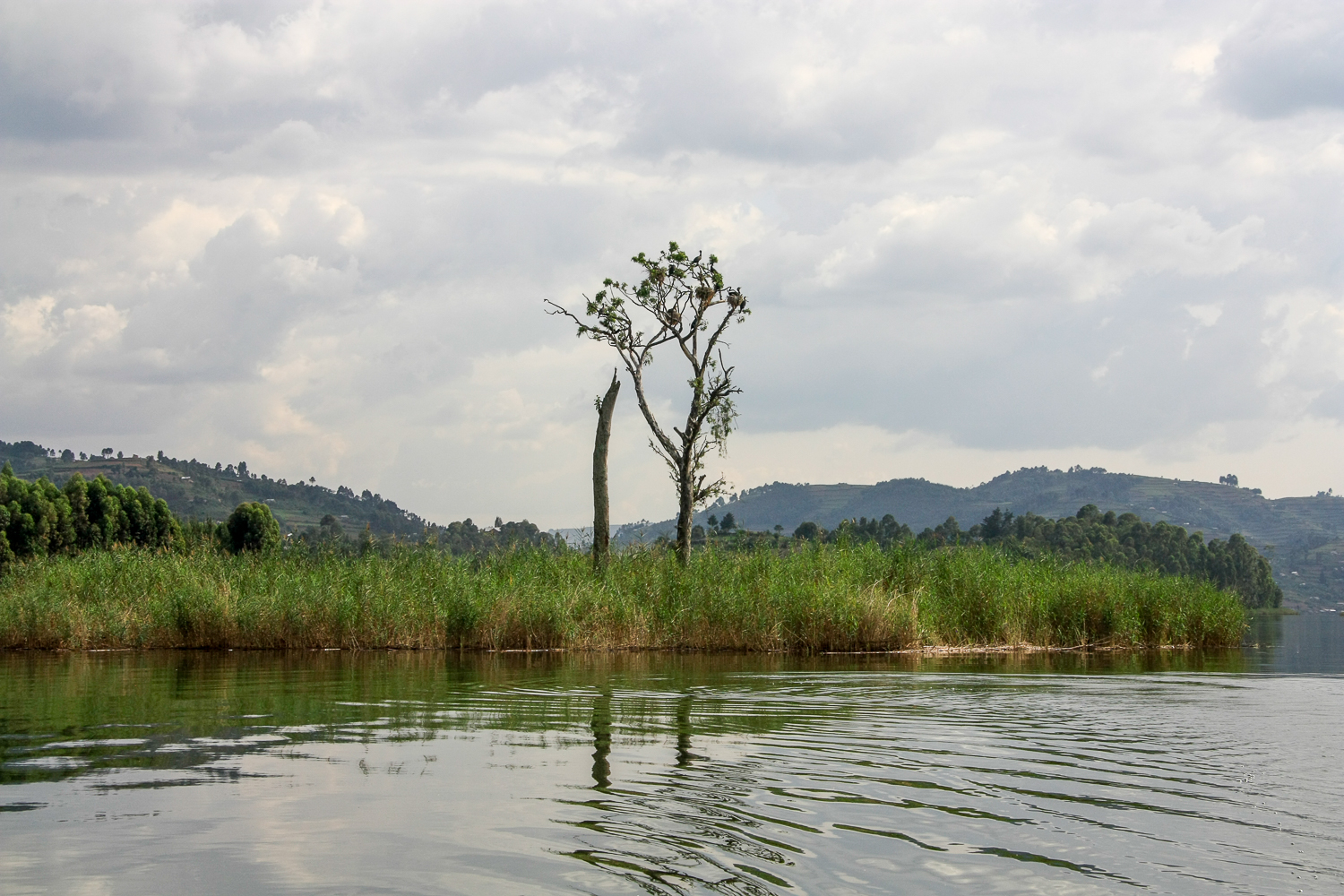 But for me, a non-volunteer, Bunyonyi was just a lovely place to rest and relax for a few days, and it happens to be one of the few African lakes without bilharzia, making it swimmable. Unfortunately, the weather was only cooperative up to a point, but it was still so pleasant to sit at the lodge and stare out at the view, whether a sunset or pouring rain or just midday, or hike up any of the surrounding hills to get a better view of the islands and topography, with some giant volcanoes in the distance. Hike, swim, sit, read, eat crayfish. The life. 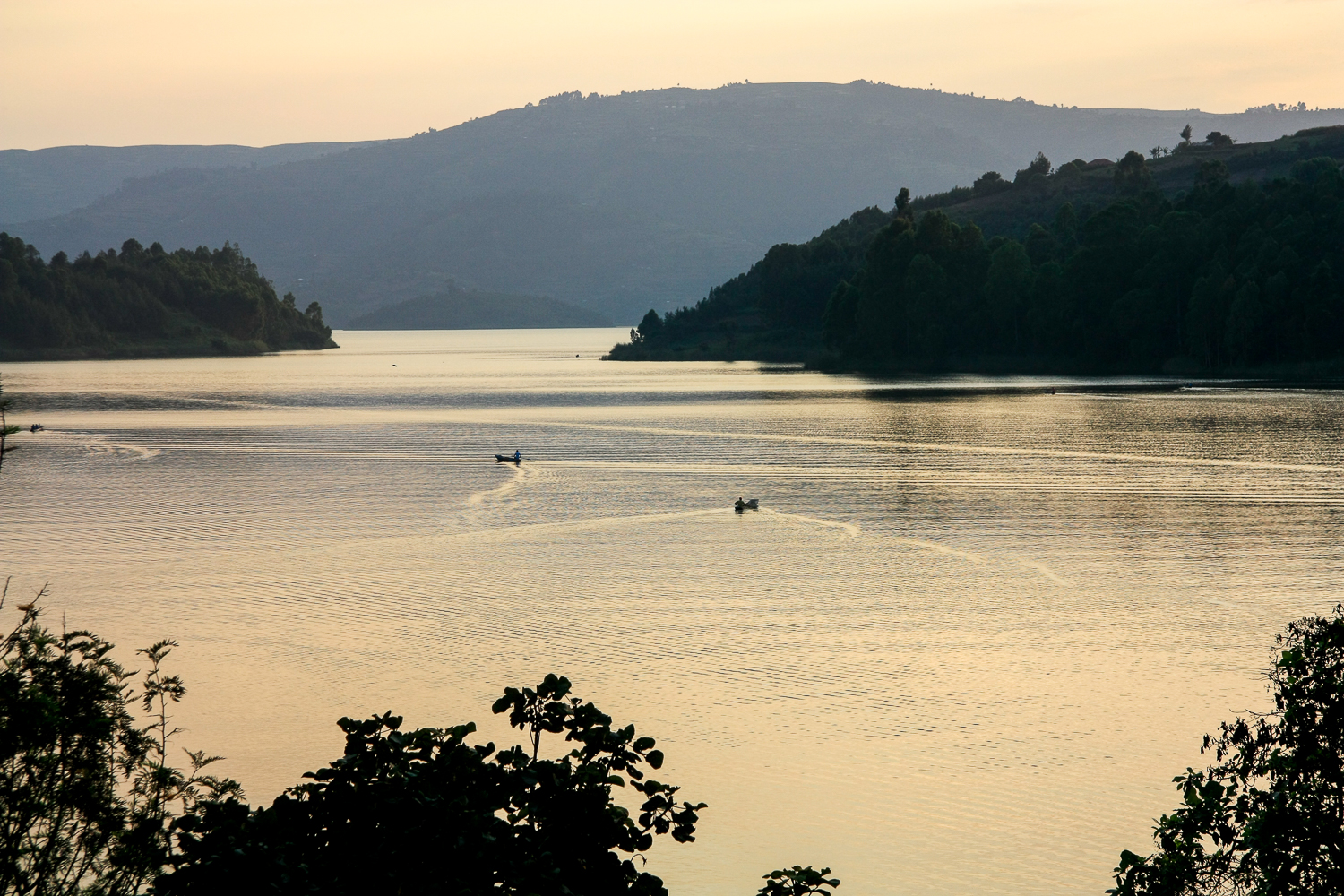